One of the most surprising sets announced by LEGO this year was 10272 Old Trafford, a massive ode to the Manchester United stadium.

I’ll be reviewing Old Trafford soon, so keep an eye out for that (it’s a monster!), but before that, let’s take a quick look at the accompanying promotional set – 6322501 The United Trinity.

It was made available when Old Trafford launched, however if you missed out, here in Australia, limited numbers of these may still be available (when I last checked two weeks ago) at the Melbourne Legoland Discovery Centre, and are free with purchase of Old Trafford.

Special thanks to the Legoland Discovery Centre Melbourne for providing this set for review. 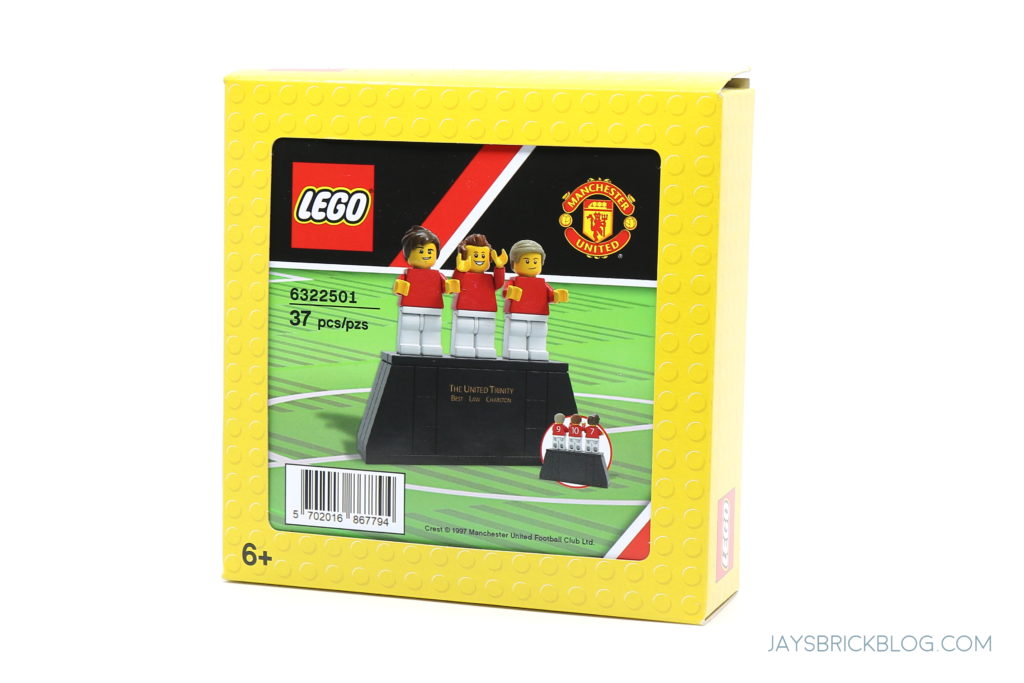 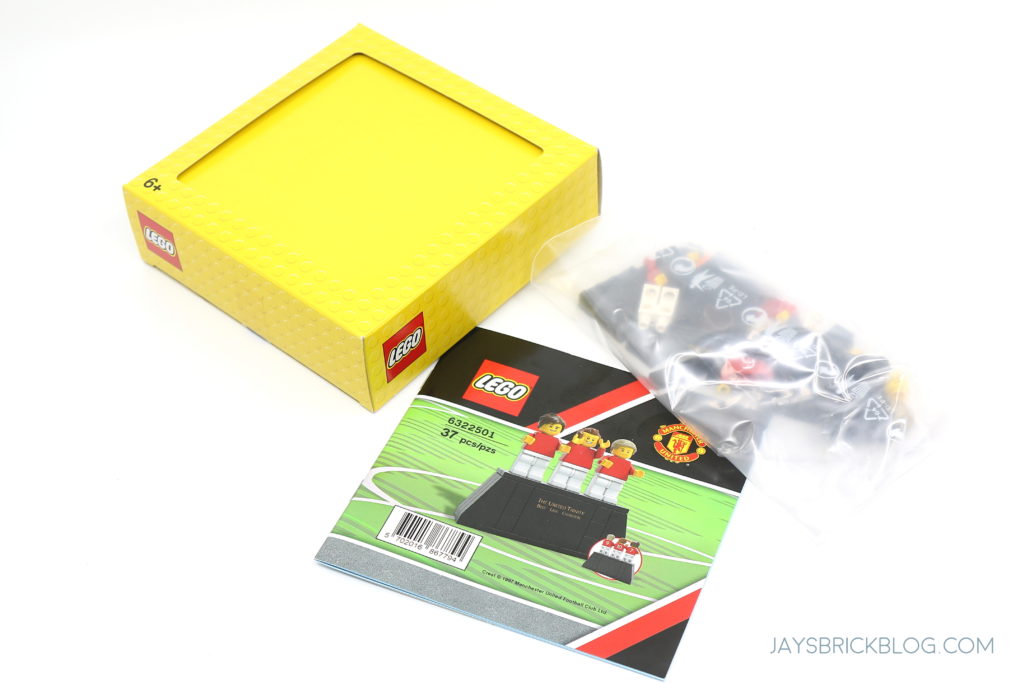 Unlike most other LEGO promotional sets, the packaging of The United Trinity is a little peculiar – instead of coming in an exclusive designed box, it comes in a standard yellow square box.

The instruction manual doubles as the illustration on the front, sliding into a pocket of the box like a frame. On the inside, the elements are curiously bagged in a ziploc bag as opposed to the usual sealed plastic bags.

It all feels very odd, and unlike any other Gift with Purchase that suggests that this promotional set wasn’t planned and was a last minute addition. 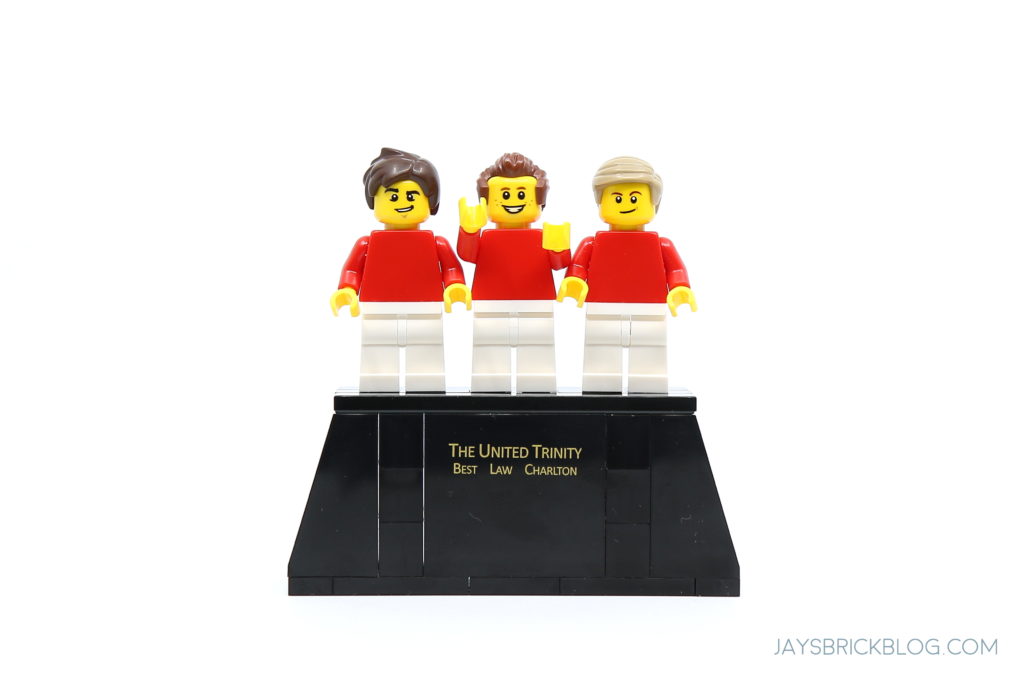 Here’s the build – it’s a really simple build and nothing to write home about.

It’s a minor but very nice touch that the text on the pedestal is printed and  features the names of George Best, Denis Law and Sir Bobby Charlton – some of the most legendary United players best known as the Trinity.

The minifigures have plain red jerseys, and white pants. The minimal red jerseys are pretty period-accurate – a relic of an era before massive corporate sponsorships.

That said, the legs are very inaccurate and would’ve been much more appropriate if they had been shorts instead. 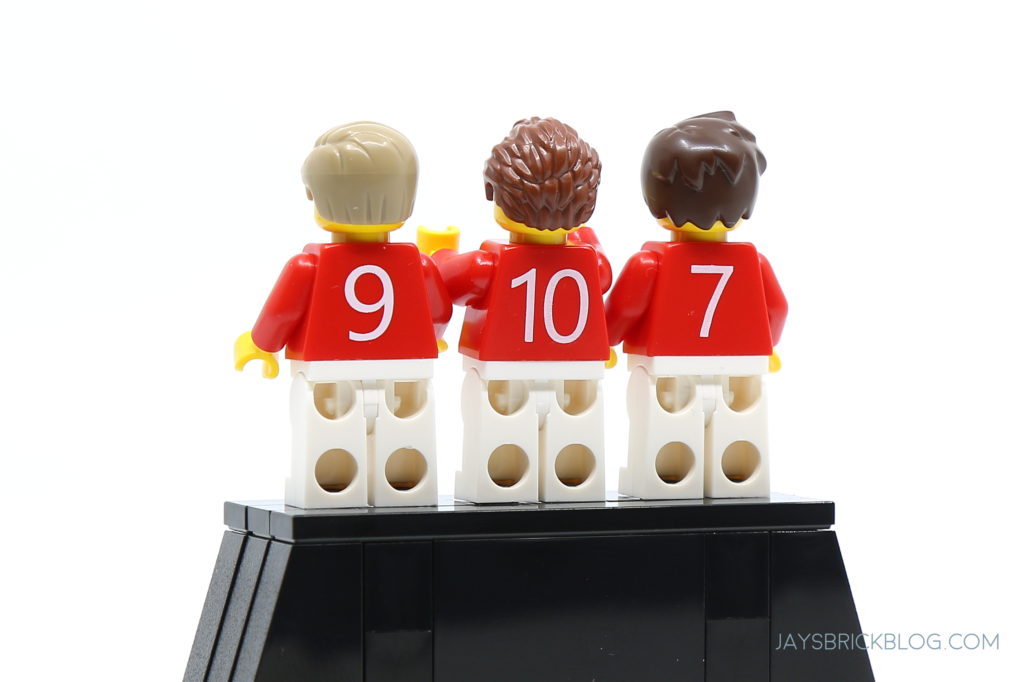 On the back, we have the Jersey numbers of the players – again, period-accurate as they didn’t have their names printed on the back in the 60s. 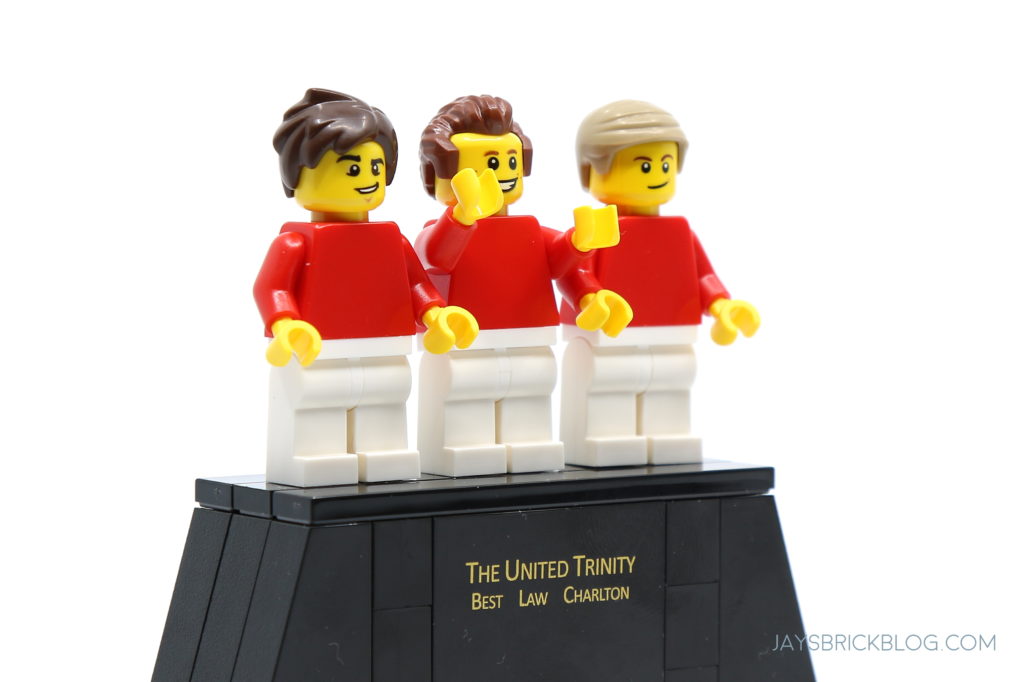 One glaring omission in my opinion is the lack of a football, held by Sir Bobby Charlton, which doesn’t quite match the actual statues outside Old Trafford. 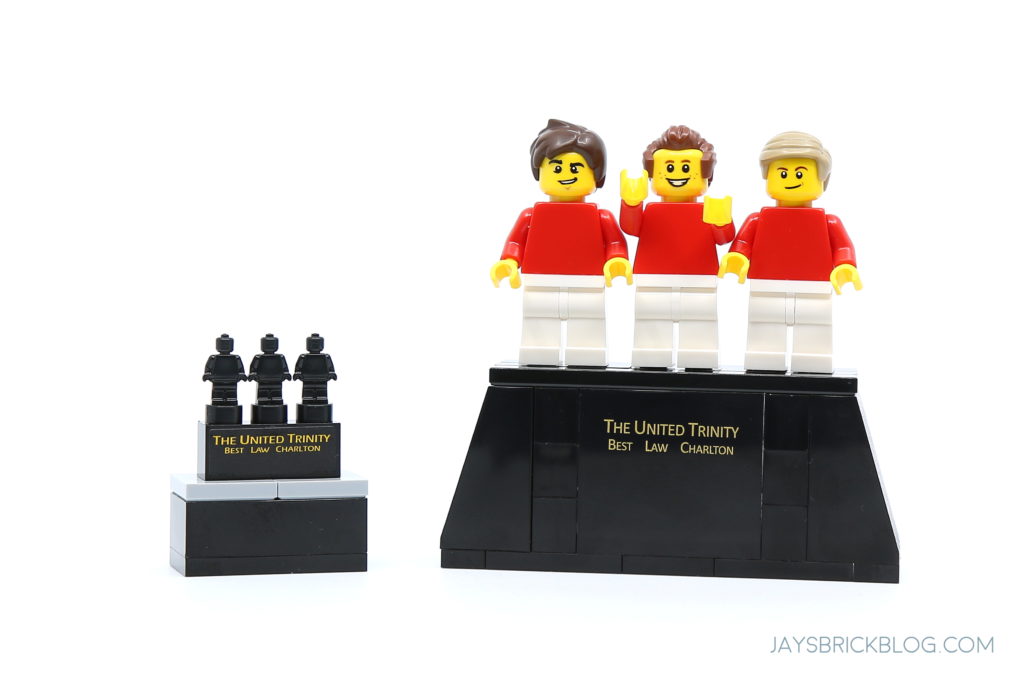 Here’s a comparison with the micro-version of the statue from the Old Trafford set. 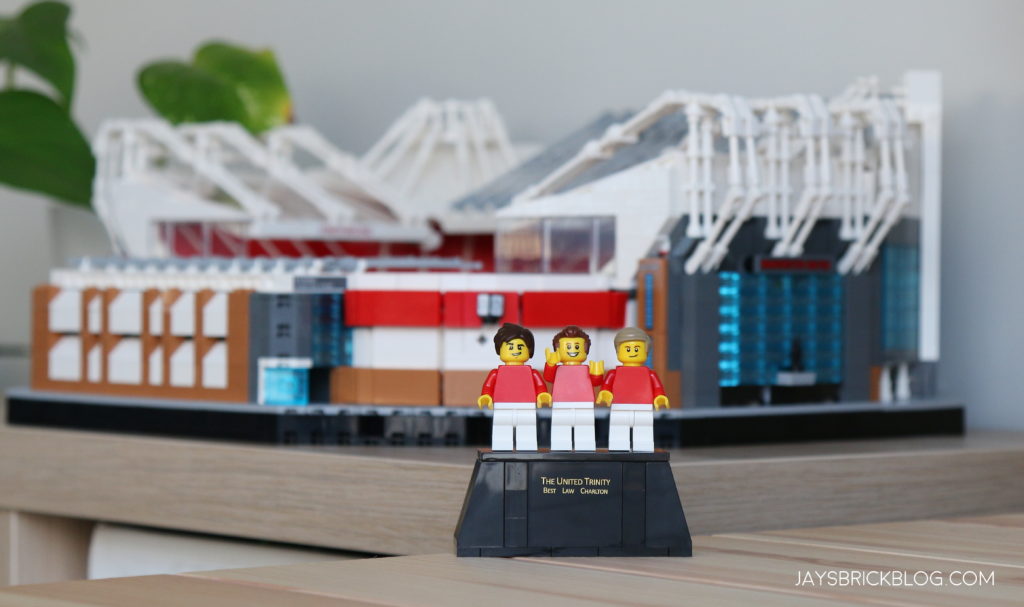 Final thoughts: As a Manchester United fan, this promotional set hits all the right spots for me.

To have minifigure versions of The United Trinity to go alongside the Old Trafford set just feels right, considering these are the first to feature actual Manchester United players as minifigures.

The choice of packaging is a little lacking, and lacks the polish and collectability of a typical gift with purchase set.

While the minifigures aren’t 100% accurate, (shorts would’ve definitely made these much more compelling) they do a decent job of replicating the look of these United legends.

If you’re a United fan, these are a must-have, especially if you own the Old Trafford set.

They’re rising rapidly in price on the secondary market. If you still want some, I’d check in with the Melbourne Legoland Discovery Centre as they’re still available with purchases of the Old Trafford set, although I imagine that they’ll soon run out!

Thanks for reading this quick review of the LEGO United Trinity promotional set! Take this as a short preview of my upcoming Old Trafford review, which I hope to complete soon!

Are you a United fan? If you managed to snag this promo set when Old Trafford launch, I’d love to hear your thoughts on the set!

Special thanks to the Legoland Discovery Centre Melbourne for providing this set for review.