It’s March, which can only mean one thing – the launch of more 2015 sets here in Australia! March is going to be quite an expensive month with the debut of Speed Champions, Elves, DC Super Heroes, Avengers: Age of Ultron, and last but not least, Pirates!

I had the privilege of gaining early access to some of the new Pirates 2015 sets, and selected 70411 Treasure Island as my first to review! 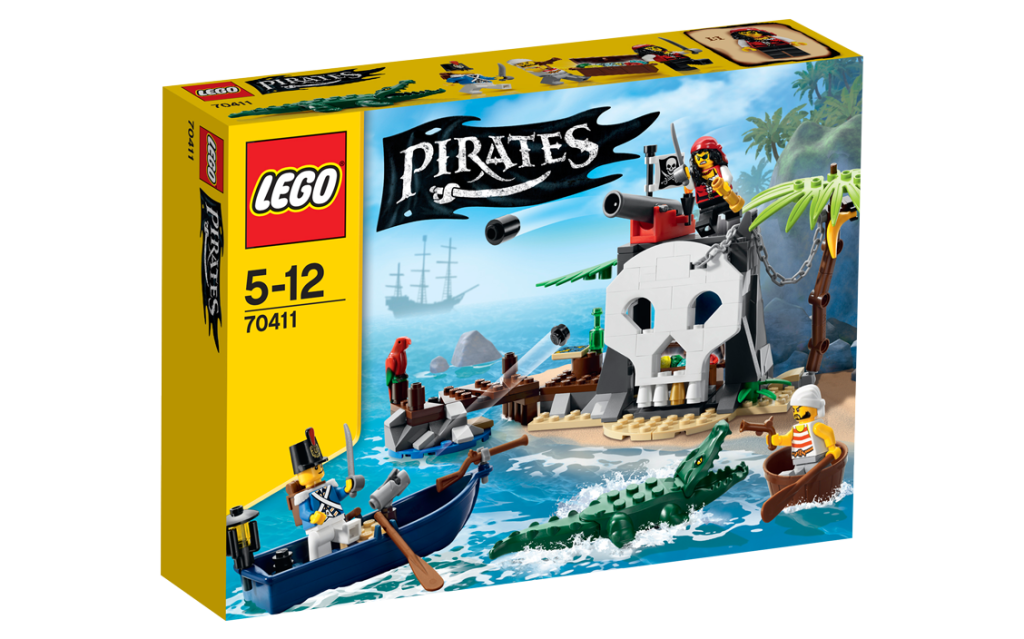 Pirates is one of LEGO’s most beloved themes, with a glorious, detailed and rich history. Making its debut in 1989 (the year of my birth!) and introducing minifigures with facial expressions, I probably identify more with Pirates than I do with any other theme.

Pirates, like Castle is what I consider an evergreen LEGO theme, we get a refresh and a resurgence every few years, the last of which was 2009’s Pirates reboot which gifted LEGO fans with the mother of all pirate ships, The Imperial Flagship. Unfortunately, I missed out on 2009’s Pirates refresh, so  I was especially excited about the new 2015 Pirates and the long-awaited return to swashbuckling, treasure and adventure on the high seas!

70411 Treasure Island is the second smallest set in this wave and is what I consider the spiritual successor to 1995’s 6279 Treasure Island, a set I am proud to count in my collection! The setting is a familiar one, the brave LEGO Pirates have discovered an island full of treasure and danger but not before a daring solo Bluecoat Soldier shows up to foil their plans! 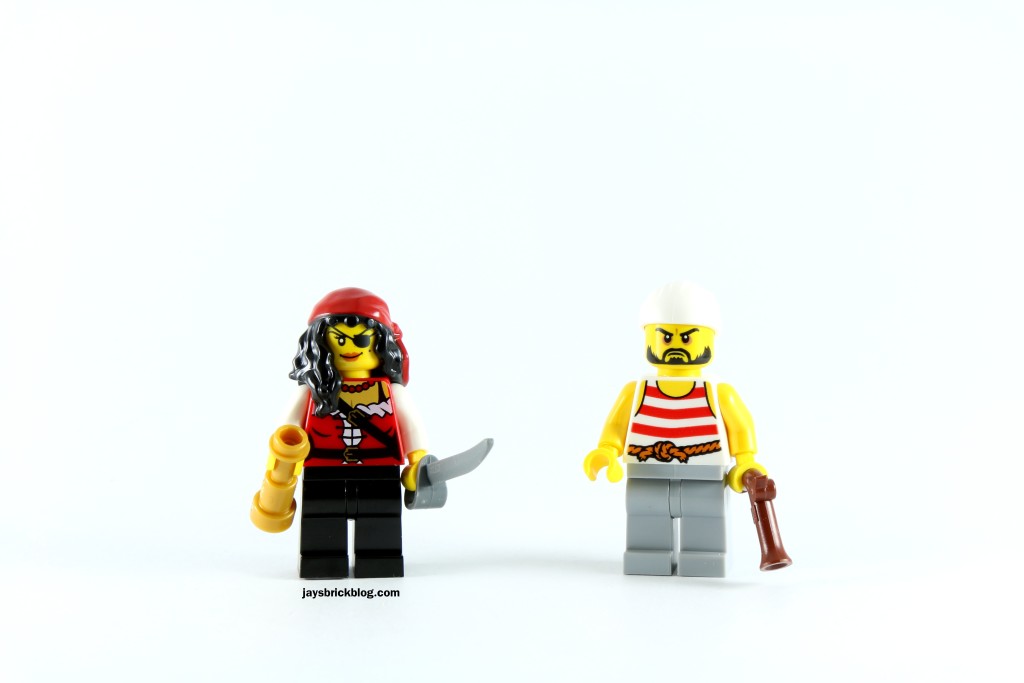 I had a huge grin on my face when I opened the box and began assembling the minifigures – probably from the rush of nostalgia and fond memories of playing with LEGO pirates during my childhood. All good remakes have one thing in common, a strong sense of familiarity but just enough enhancements to ensure that it doesn’t seem like a lazy copy-paste job.

You get 2 pirate minifigures in the set, a Pirate Queen (woo, more strong female characters!) and her trusty pirate assistant. The Pirate Queen has a really cool Captain Jack Sparrow-inspired bandana fused to volumes of messy black hair. Like all good pirates, she has an eyepatch and comes equipped with a cutlass and a pearl gold spyglass to detect incoming Bluecoats!

The Pirate Queen’s skin that’s exposed is a little darker than the usual shade of minifigure yellow, a very major annoyance to me. Thankfully, the Pirate’s torso skin colour is a relatively similar shade of yellow.  More on this later. 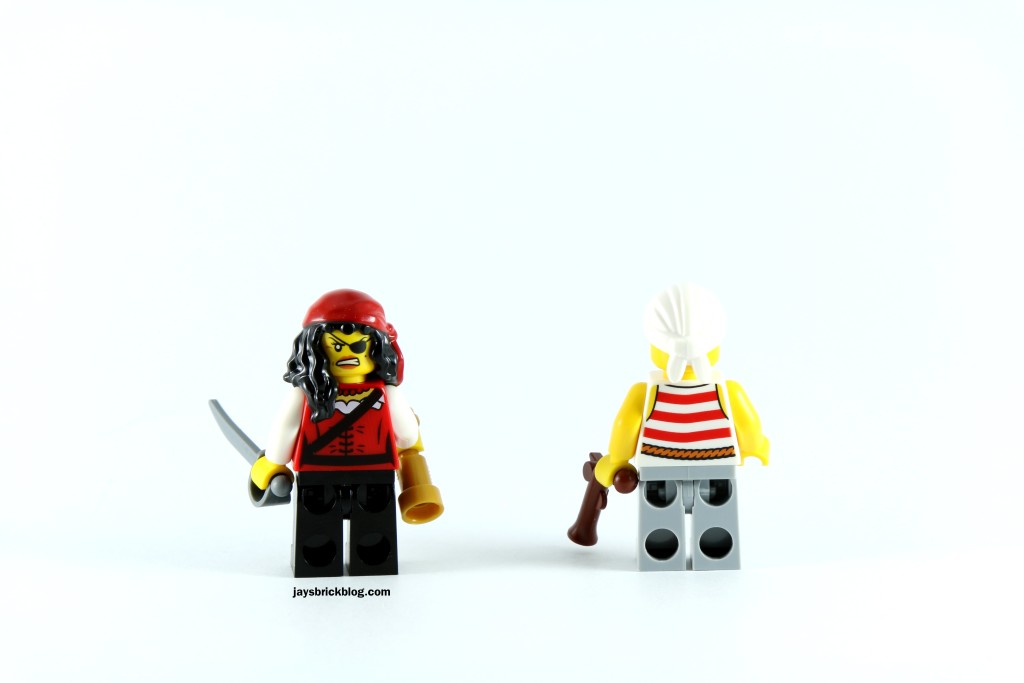 Both pirates have back printing, which is sharp, crisp and detailed. The Pirate Queen has an alternate face with an angry expression. 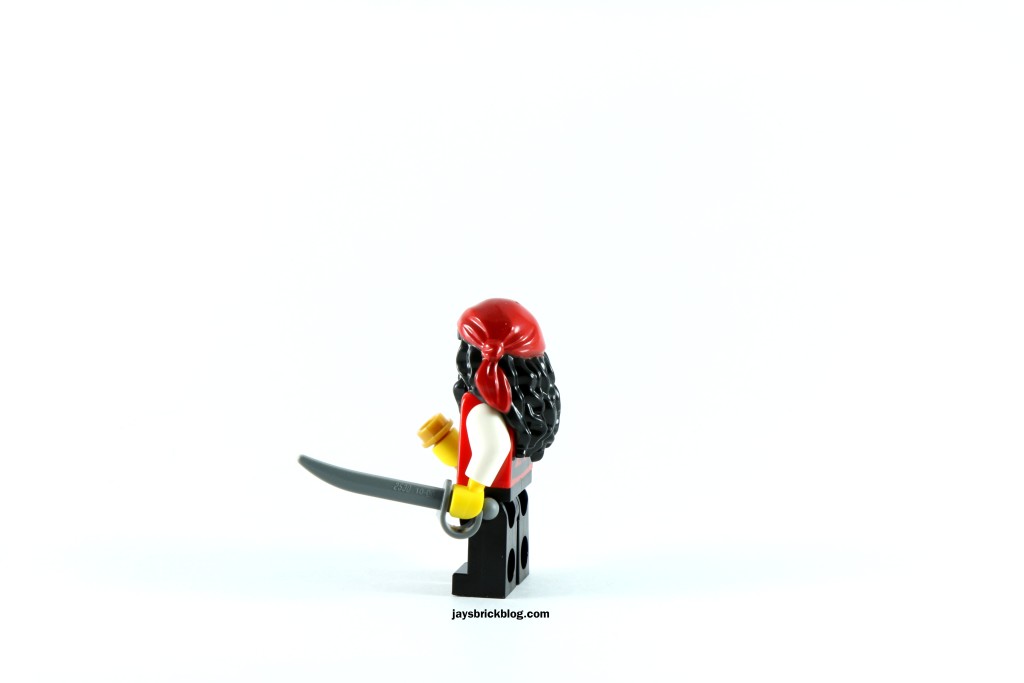 I really like the Pirate’s Queen awesome bandana and hair combo piece. Its immaculately detailed and is a great show of force by LEGO to introduce more strong female characters in what has traditionally been a male dominated theme. 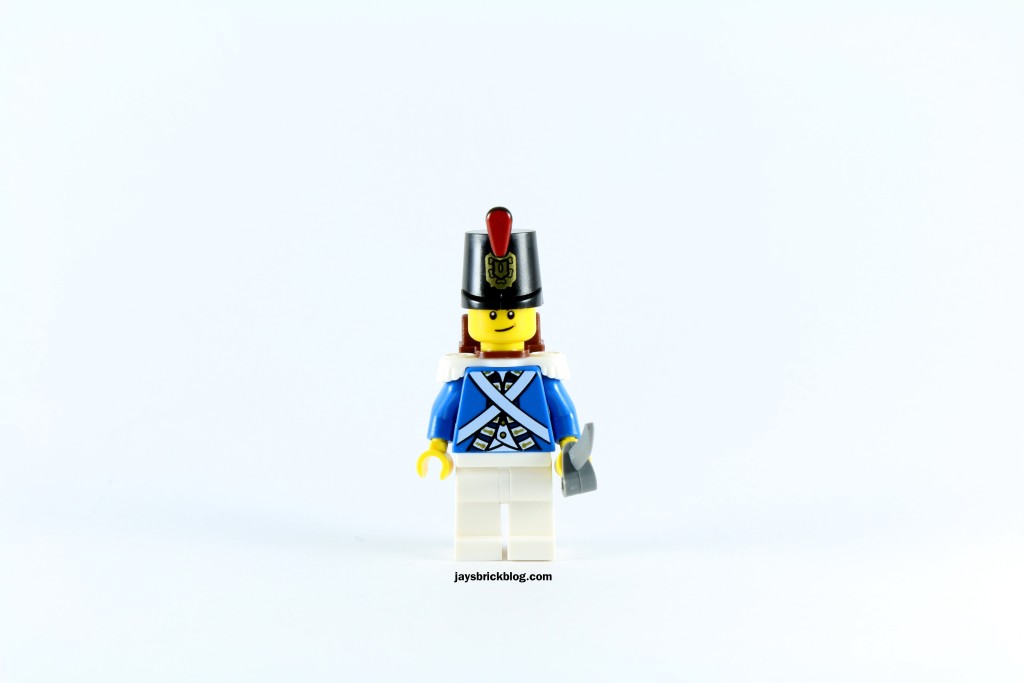 Here’s the solitary Bluecoat Soldier that is tasked to stop the Pirates’ plans to get away with the treasure. I love that LEGO brought back the Bluecoats as they were only available in the first few LEGO pirate themes.

Bluecoat Soldier has tall cylindrical hat called a Shako, a handsome confident smiley face, white epaulettes and even a backpack (loved how much this reminded me of old Pirate minifigs!). The details on his torso are really eye-catching but its ultimately weighed down by the obvious blue tinge on the white straps. It kinda looks like what happens when you accidentally wash whites with blue jeans. 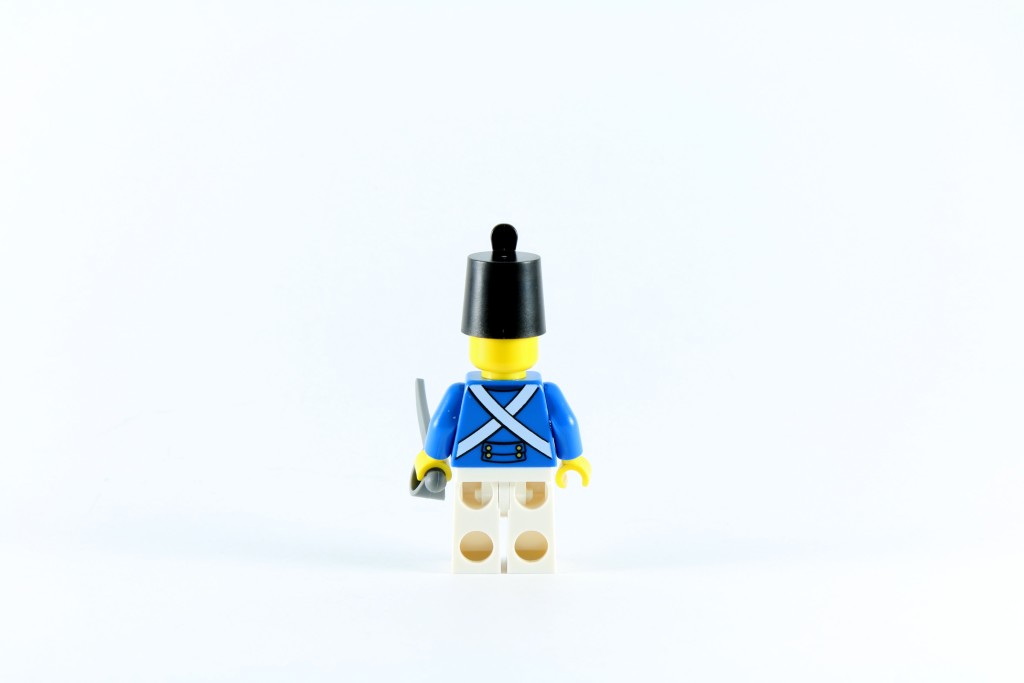 Like most contemporary non-Series minifigures, back printing is almost a guarantee these days. Again, the white straps have a very distracting blue tinge.

The Bluecoat Soldier is a great minifigure that’s hampered by a very common torso discoloration flaw. I really wish that LEGO would sort this out as it really gets on my nerves. If you have early 90s Pirates minifigures, pull them out and compare them against the new ones and you’ll notice that the torsos details never suffer from this level of colour bleeding.

I really want to like the Bluecoats but this one major torso flaw is quite a concerning sign that in 25 years later, even with enhancements in design and manufacturing, the fact that they can’t get the colours right is a huge slap in LEGO’s motto of “only the best is good enough“. 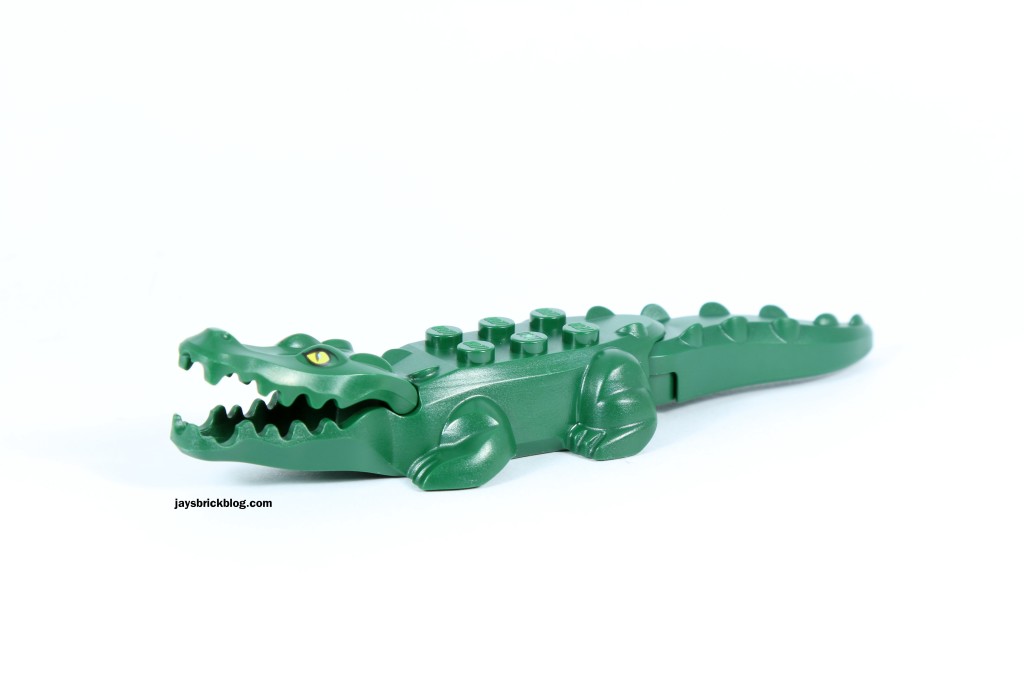 One of the cool things about this set is that you get a new LEGO crocodile! This is my very first new crocodile (I haven’t bought any of the new City Swamp Police) so naturally I was very excited to get up and close and personal with LEGO’s latest reptile.

LEGO have updated the iconic crocodile element for the 21st century – the new version includes painted eyes, fine moulded details on its front and hind legs and a more organic and natural look. 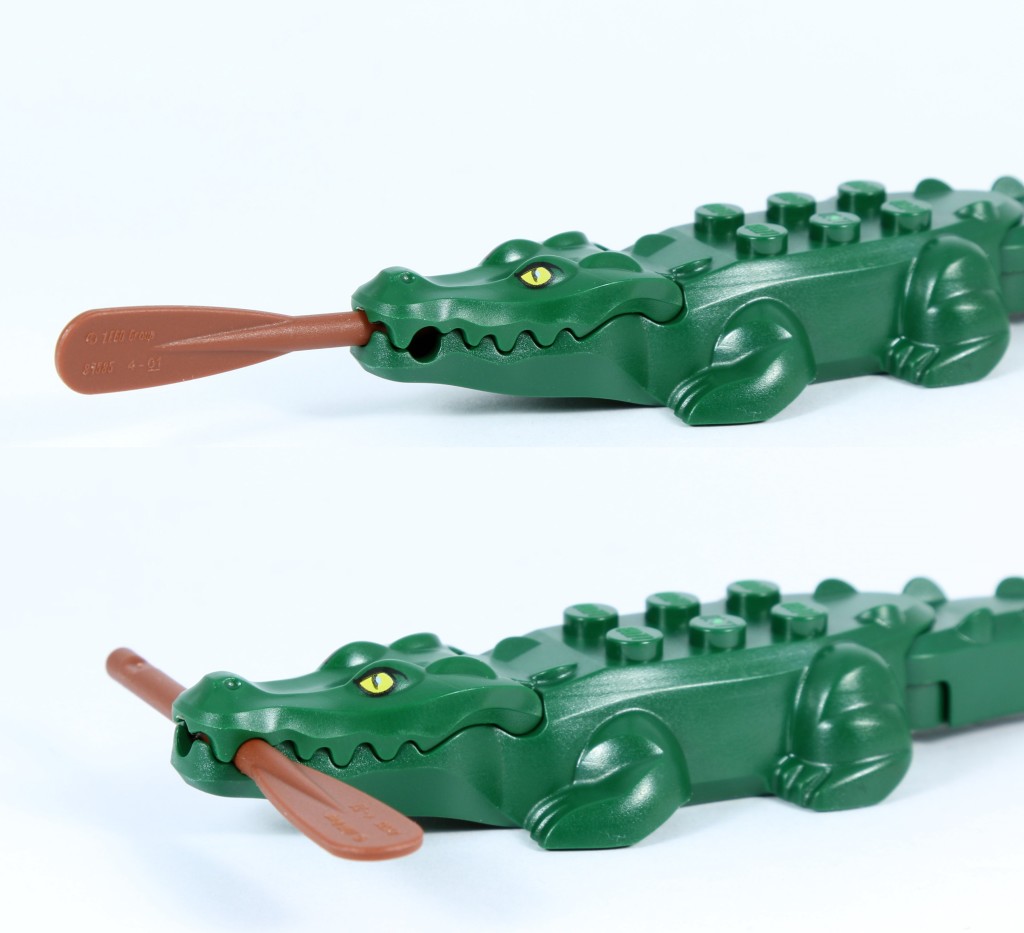 The crocodile’s jaw has also gotten a few enhancements as it can now hold stuff in between its teeth. You can either pop a standard LEGO-sized stick (the oar works great) into its mouth from the front, or it can grip it with its teeth from the side.

As you can notice from these closeup photos, the crocodile’s head is a lot larger than its predecessor. It’s quite cavernous and you can probably fit other parts in it. I must perform some more tests…for science, of course.

I quite like the new crocodile piece, but I also like the old crocodile design purely because like real crocodiles they haven’t changed since forever. That said, change is good, and I’m quite ready to embrace this radically improved crocodile, even if I will miss the older and more simpler version. 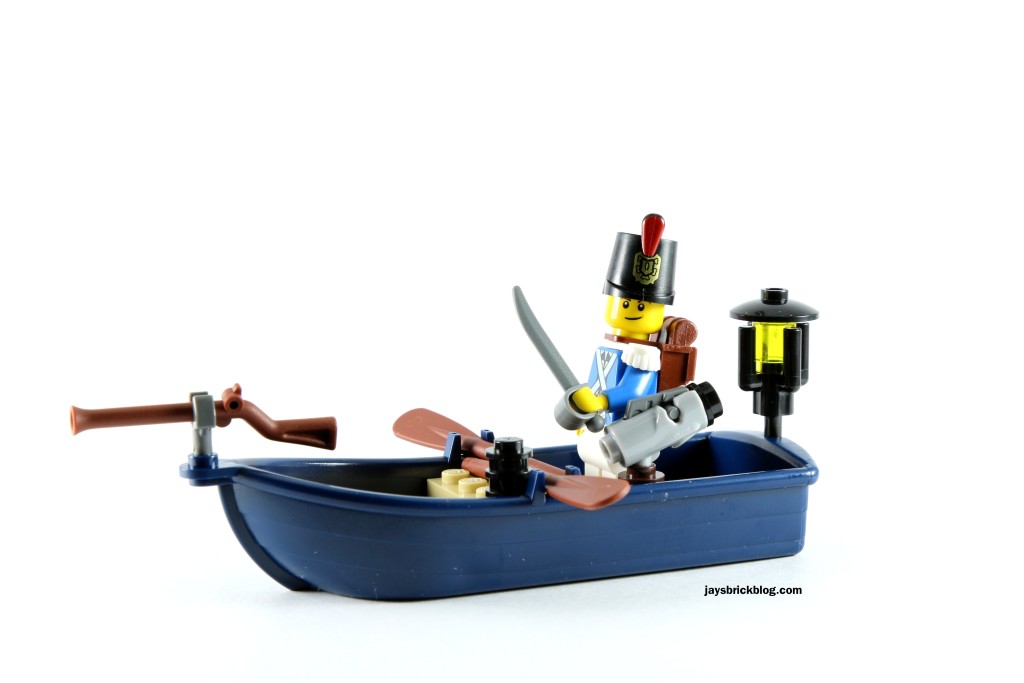 For a small rowboat, it packs quite an impressive amount of firepower. The bow contains a mounted musket which can easily be detached if the Bluecoat soldier needs to shoot some Pirates. The boat also packs a small stud blaster, which I suppose is meant to be a primitive cannon of sorts.

Don’t ask me about the physics of it all, as I’m quite sure that placing a cannon on a wooden rowboat is a recipe for disaster/Youtube fails video compilation.

It’s great to see the return of the wooden oars which thus far remained unchanged, and the boat also has a lantern at the back. I quite like the simplicity of the rowboat and how LEGO have cleverly added things to it that all boys love – more guns! 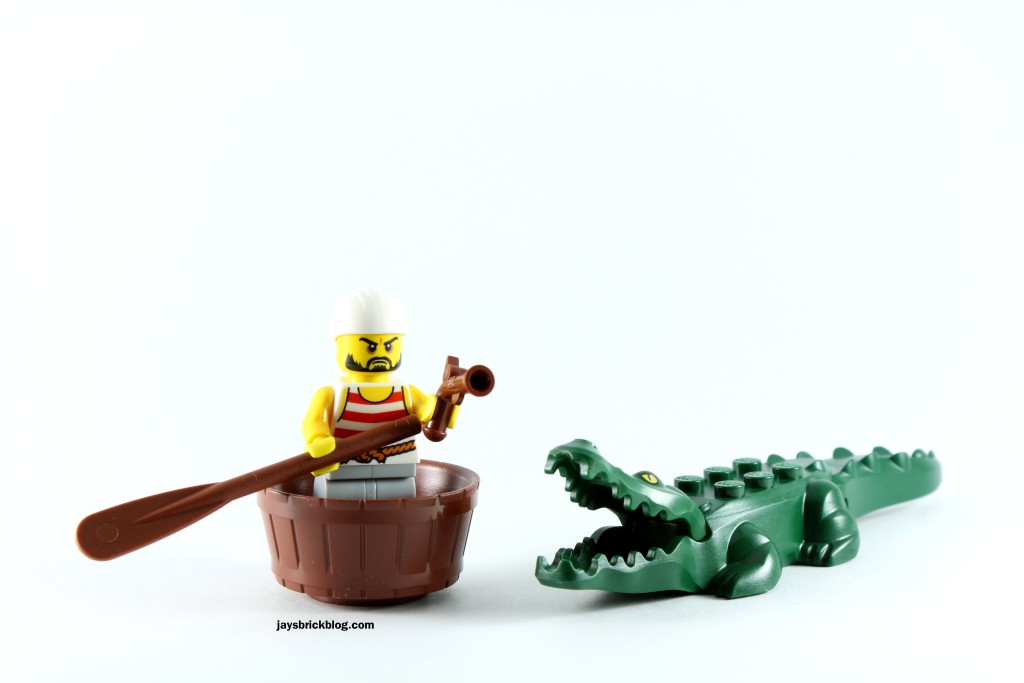 Why is the Pirate paddling a wooden barrel? I really don’t know, but I’m just going to assume that he’s a little dim and fancies it as his preferred method of navigating the seven seas. The entire premise of it looks so comical that it’s hard to stay perplexed at it for long. Imagining the pirate fending off a hungry crocodile with his singular oar is pretty cartoony. 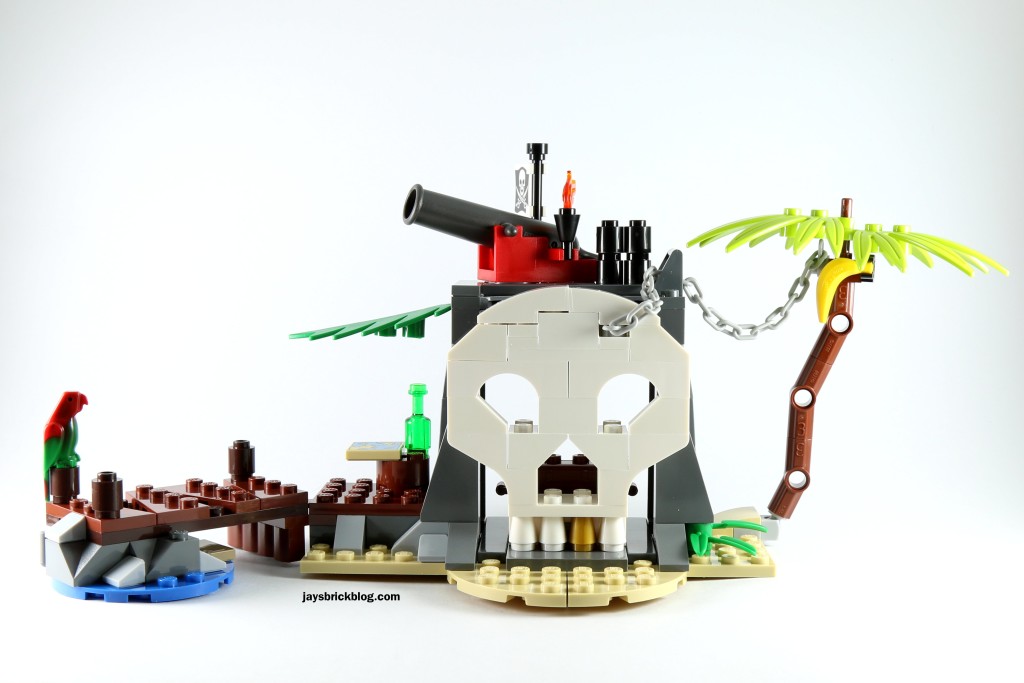 Here’s Treasure Island. It doesn’t feel too small, yet it definitely could’ve been bigger. Seeing as how this set sits at a very attainable price point, I’m not going to complain about its size and instead will take it as what it is – the small set that it is.

The centerpiece is undoubtedly the brick built skull, which is a classic Pirate icon and hides an interesting secret. The skull covers a simple cave, and there’s evidence of man-made structures such as a primitive dock and the island’s defence system – a good ol’ cannon! It wouldn’t be a Pirates set without a parrot, which has eye-catching red and green plumage. The dock part is fairly basic, it extends out to the sea and is built upon some rocks. The only indication that Treasure Island is indeed an island comes from a tiny bit of blue plates that act as water.

You could plop the whole structure on a blue base plate…but LEGO doesn’t make those anymore, so yeah. 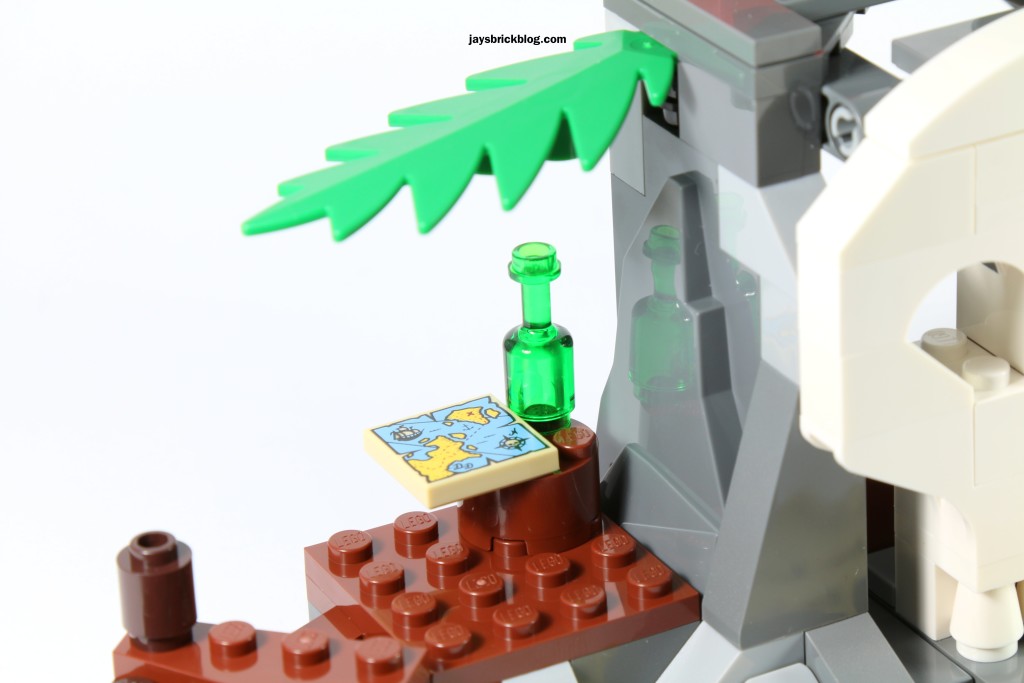 There’s a small table on the dock with a green bottle and yet another nostalgic piece, a treasure map! 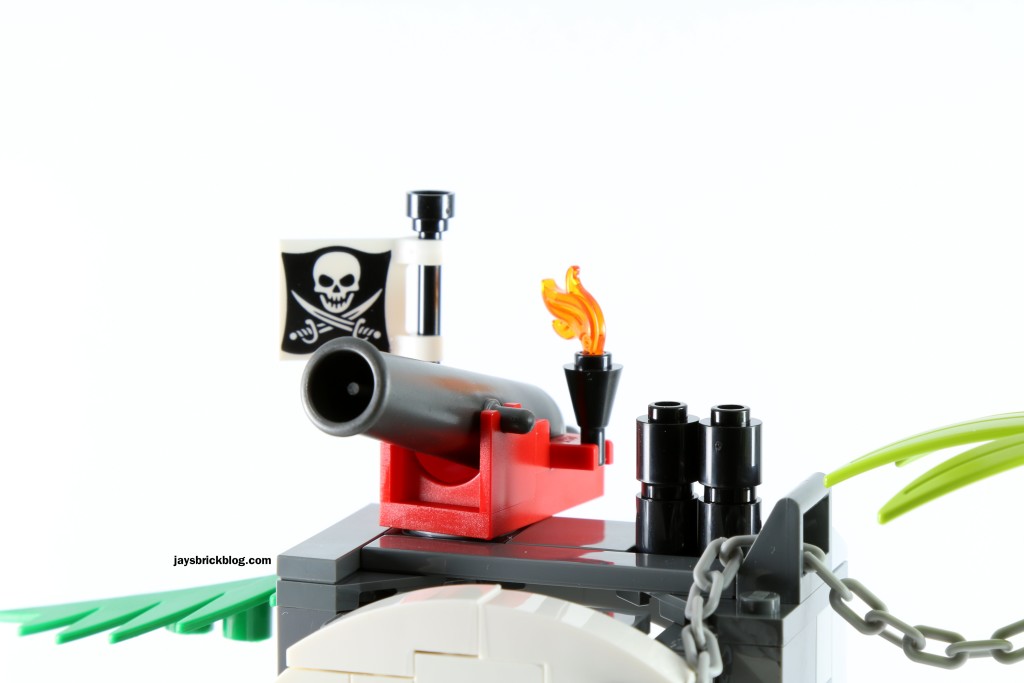 They say that only two things in life are certain, death and taxes. I’d like to add a third – that LEGO cannons are amazingly awesome. They’re timeless beauties and I’m so pleased that we get one perched on top of the skull cave. 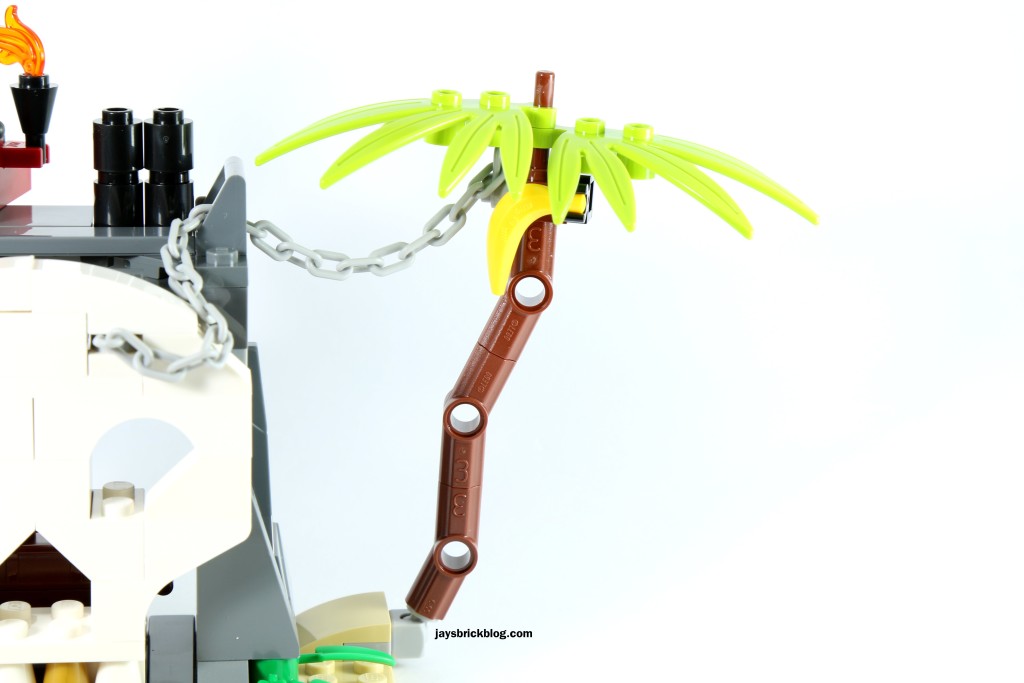 Updates are only natural but this is one upgrade that I’m not a fan of. I am extremely disappointed that LEGO has apparently done away with the iconic coconut tree. What we have in this set, a palm frond or banana tree (judging by the banana) is a poor imitation of the beloved coconut trees that are synonymous with LEGO pirates.

It’s not that this new tree design looks bad, it’s actually pretty darn attractive with the bent trunk and the lime green fronds that top the tree. It’s just not in the same league as the coconut trees.

You may notice a chain attached to the tree. It’s actually a neat little play feature that LEGO have squeezed into this set.

I have to admit, it’s pretty fun, yanking on the tree to lift up the skull to reveal the cavern where the treasure is hiding! The play feature adds a substantial amount of interactivity and light-hearted fun to the set. 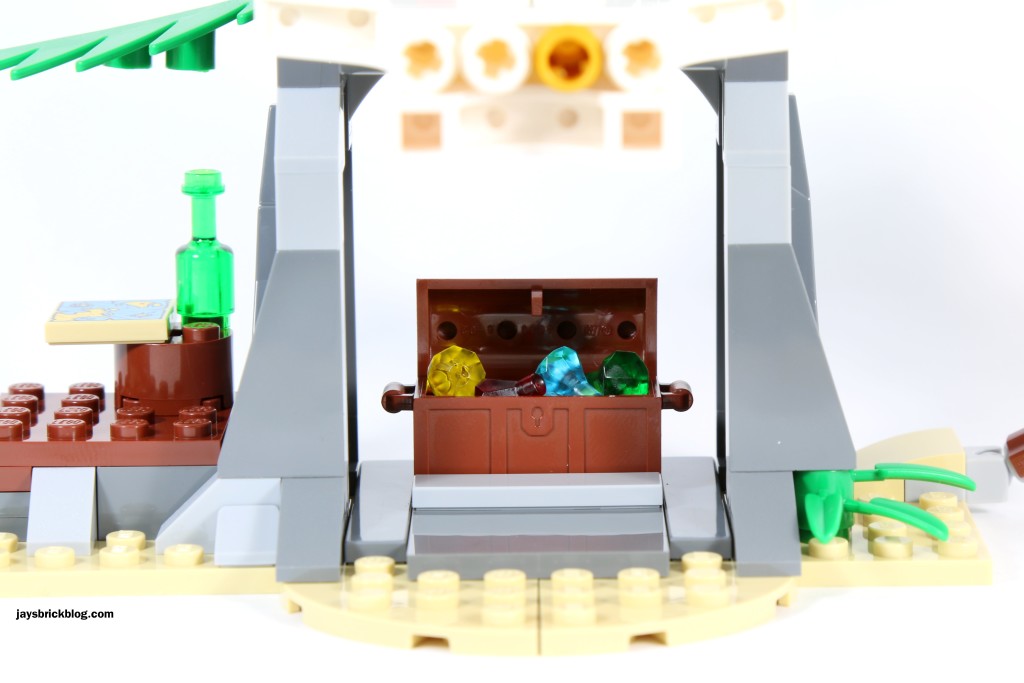 What’s in the treasure? A chest full of jewels. It’s a bit of a letdown that LEGO seems to have completely phased out the chrome gold coins. They will be sorely missed. 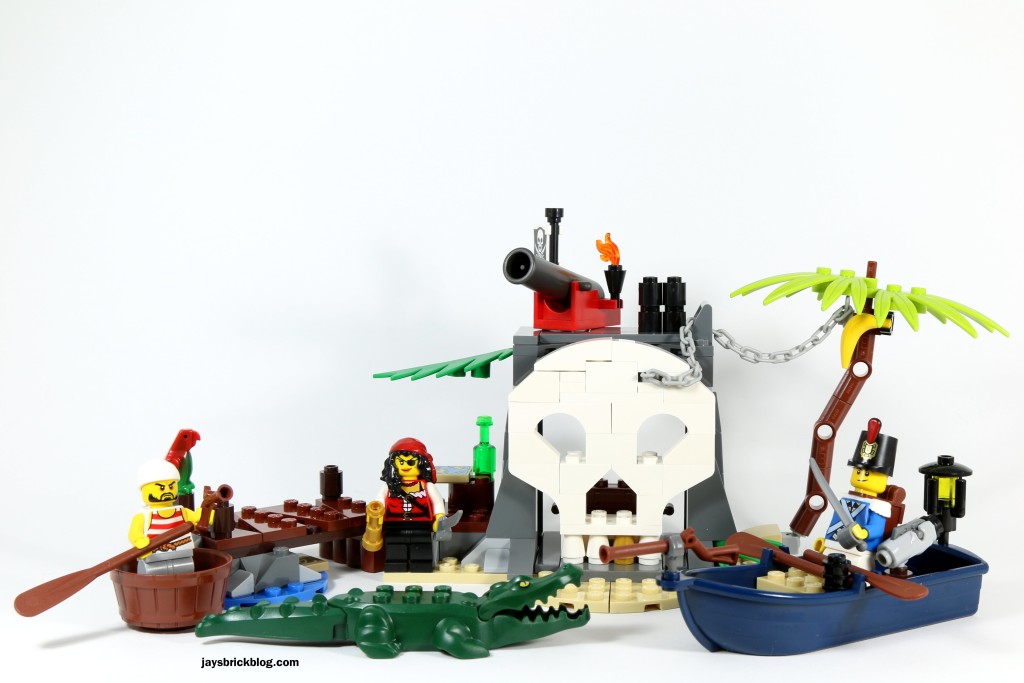 Final thoughts: Treasure Island is a walk down memory lane done right. It expertly balances iconic and recognizable Pirates design influences and gives them a shiny new update befitting of 2015. If you’ve been a longtime fan of LEGO, I’m willing to bet that you will probably be as excited about the new wave of Pirates as I am.

The set is a breezy and enjoyable build. I have to admit that since this was the first Pirates set I put together, I was mostly inundated by nostalgia for most of it, but that’s probably what LEGO had in mind when they decided to reboot Pirates.

The only thing that let me down was the lackluster print quality on the Bluecoat Soldier and Pirate Queen, but the other enhancements and updated accessories kind of make up for the shoddy printing. The lack of cornerstone LEGO pirates elements such as coconut trees and monkeys are also a slight bummer, but I’ll get over it eventually.

If you’re a fan of Pirates, you’re almost obligated to complete the entire theme. If you’re a new LEGO fan or have not had any experience with previous Pirates themes, Treasure Island is an ideal starting point as it contains all the necessary ingredients to give you a worthy introduction to LEGO Pirates.