It’s been quite a while since I’ve built (or purchased) a Ninjago set. I’ve been a long time admirer of the theme but somehow have always preferred to spend my money on other themes such as Creator or licensed sets like Super Heroes or Lord of the Rings.

When the news broke that Ninjago were Rebooting their theme in 2014 to include robots, something switched on in me and I knew that I had to pick up a couple of sets because they looked like a whole load of fun. Also because I think Robots and Ninjas go together like Peanut Butter and Jelly.

I took advantage of a recent 20% off Lego sale at Target to pick 70723 Thunder Raider up since one of the ninjas included is Jay, which is coincidentally my name as well! 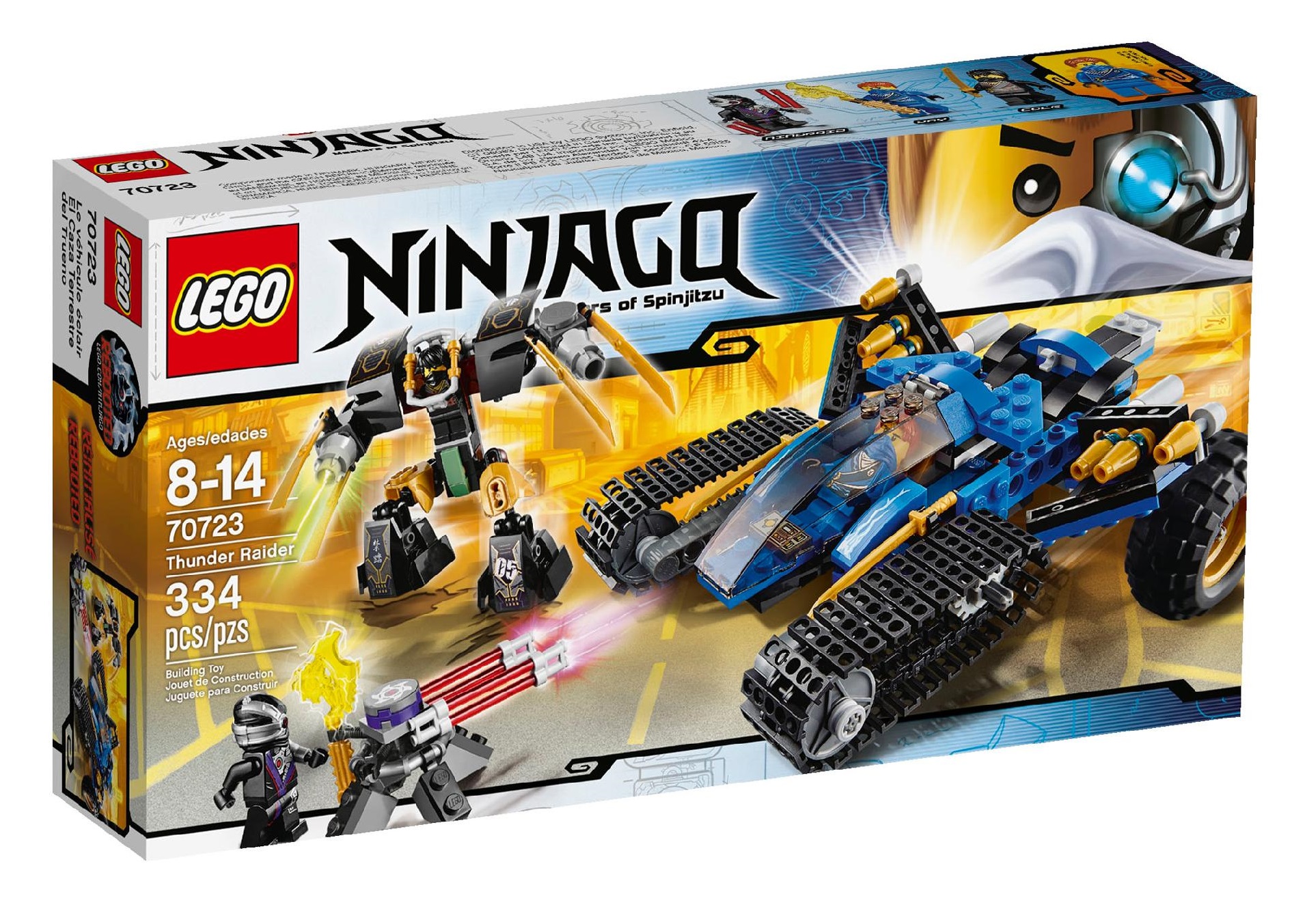 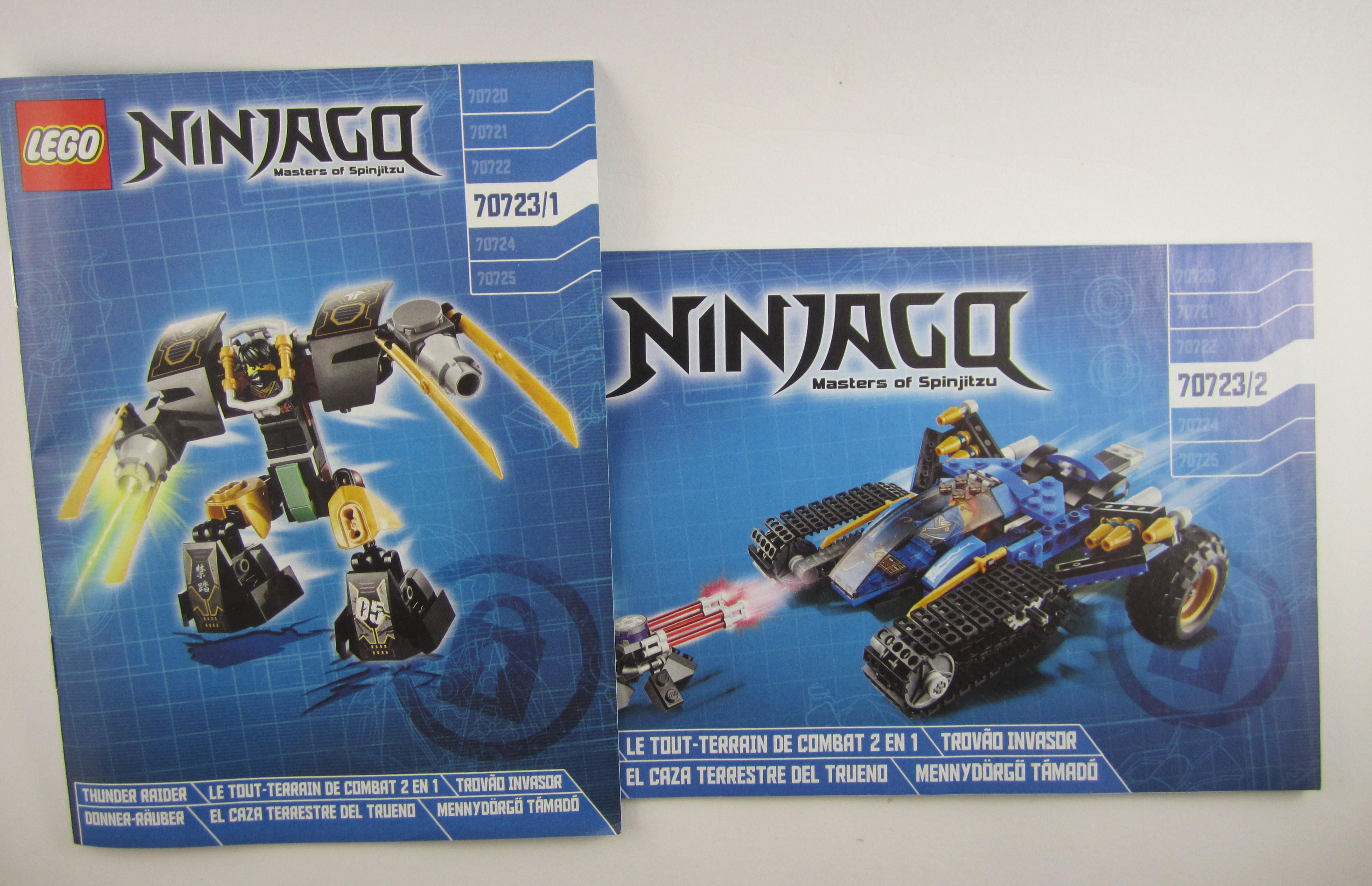 First thing that caught my eye when I emptied the box was the manual! Lego has apparently jazzed up the manuals to include illustrations of both builds (the exo-skeleton mech and the Thunder Raider) on each manual, so you have a clearer idea of what you’ll be building. The overall design is also very cool, keeping with the “techno” theme of Ninjago Rebooted. I hope this isn’t just exclusive to the Ninjago theme this year. 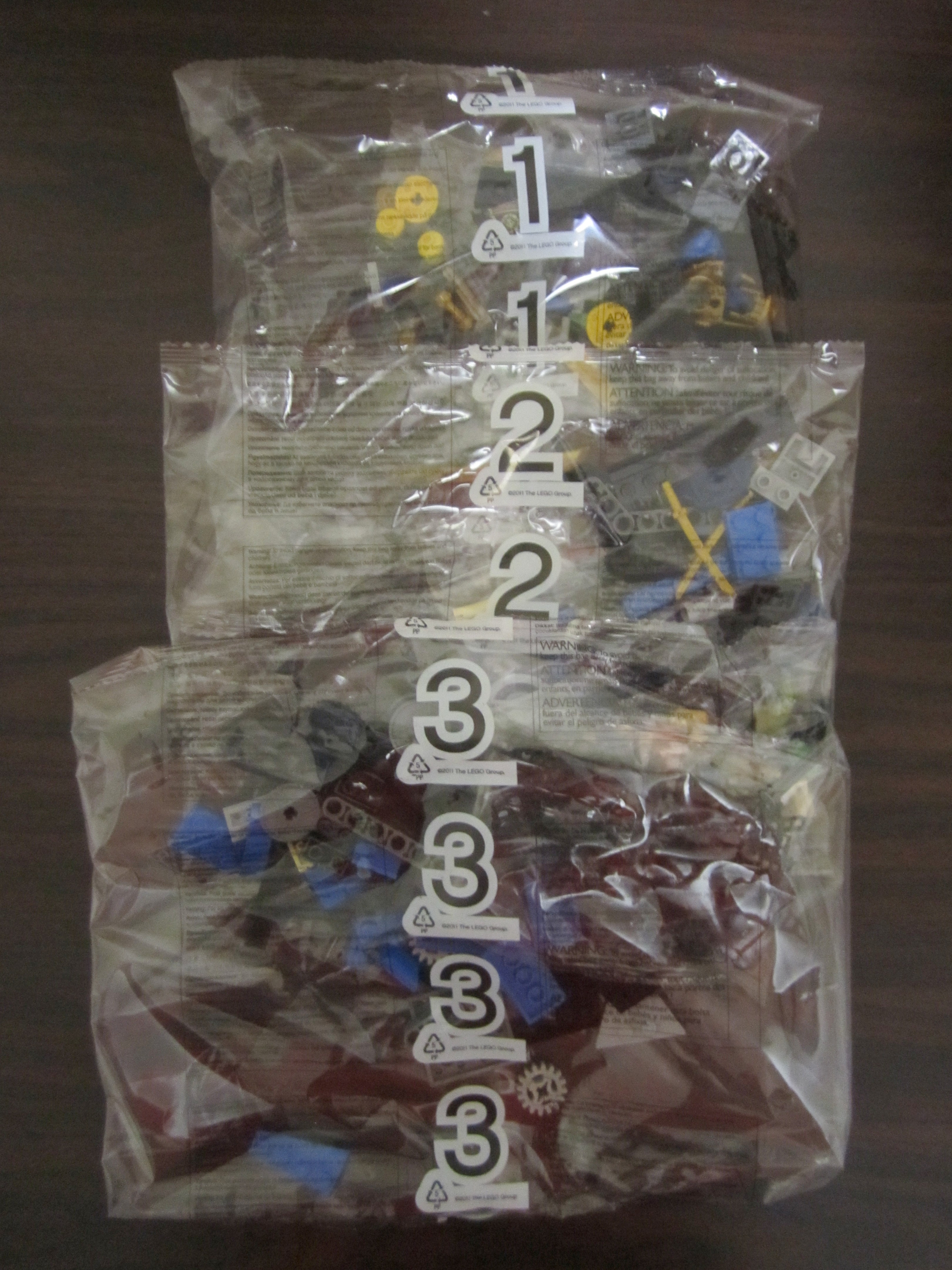 Three polybags inside the box. Bag 1 contains the parts for Cole’s Mech and bag 2 and 3 pieces together the Thunder Raider. 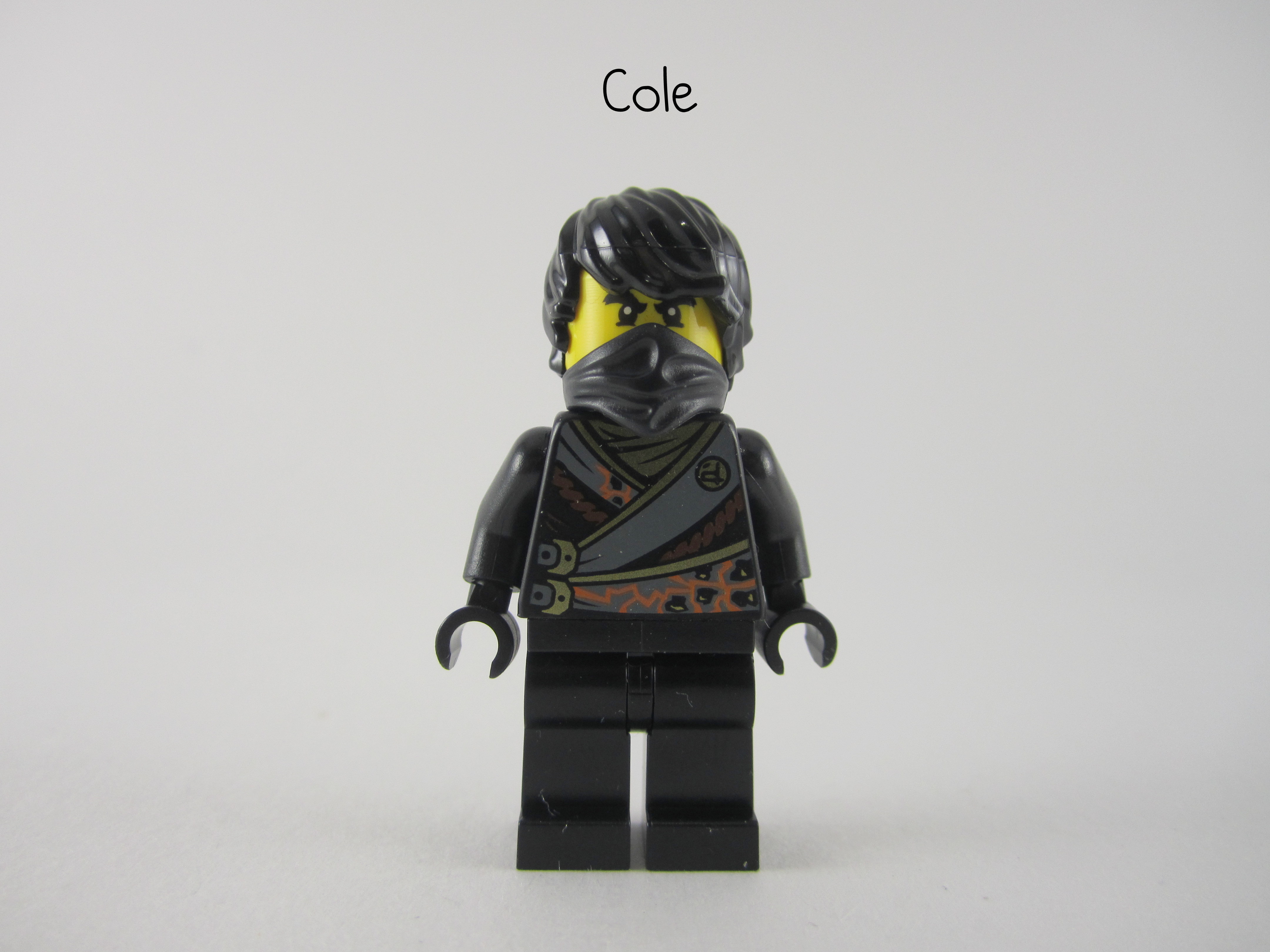 Here’s the Cole minifig. I think the scarf/mouth mask piece is new (at least to me) as I haven’t come across it in previous Ninjago sets. I like the scarf piece as it gives Cole a more ninja-like look compared to the previous bulky full-faced helmets. A bit disappointed that he doesn’t have any printing on his legs. Some extra detail there would’ve been cool. 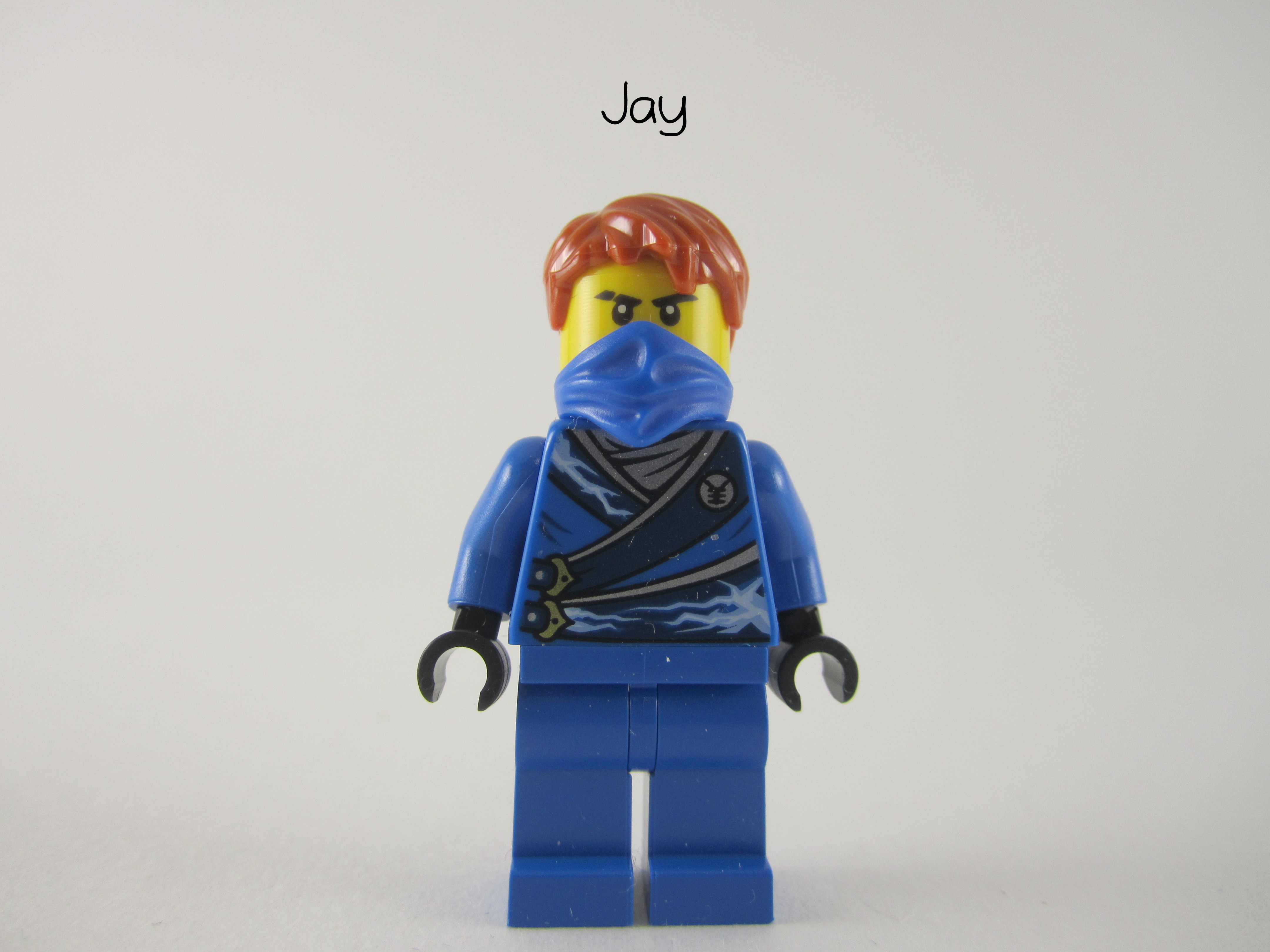 Here’s me! Since I have absolutely no idea about the lore surrounding Ninjago I’m going to make stuff up as I go and try to guess the character’s roles and such. Jay looks like he’s the Lightning Ninja, as he has bolts of lightning on his sash. He doesn’t look as cool as Cole, mostly because of the Ginger hair. I do wish they’d given him a cooler hairpiece. He looks like an ordinary Lego City denizen with his hair. Like Cole, he suffers from no-pants-design syndrome, possibly due to cost saving measures at Ninjago HQ. 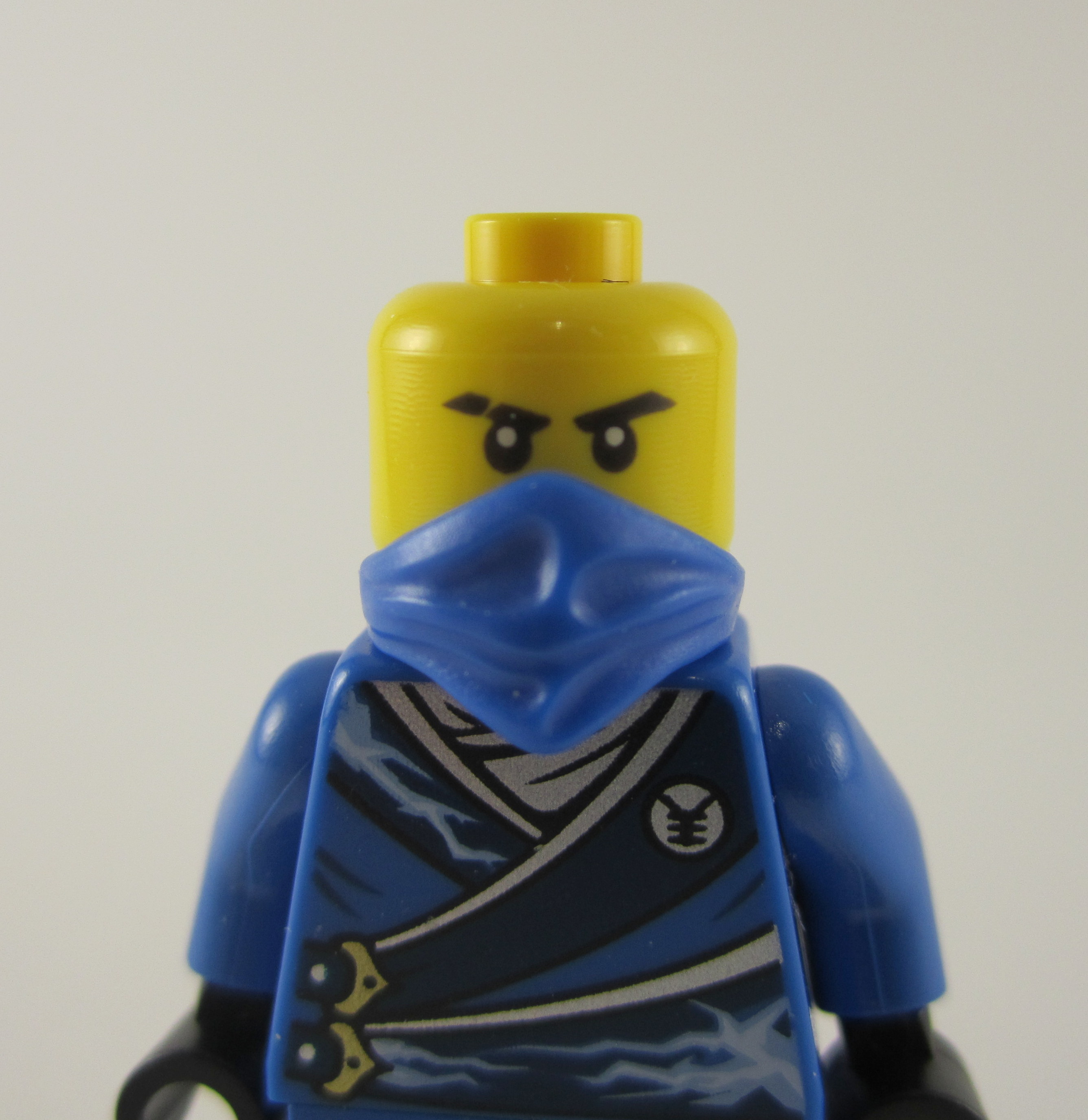 Jay has a little bit of his eyebrow cut off. My guess is he either cut himself trimming his eyebrows or he got it fighting some evil robot/serpent dude. Most likely the former. 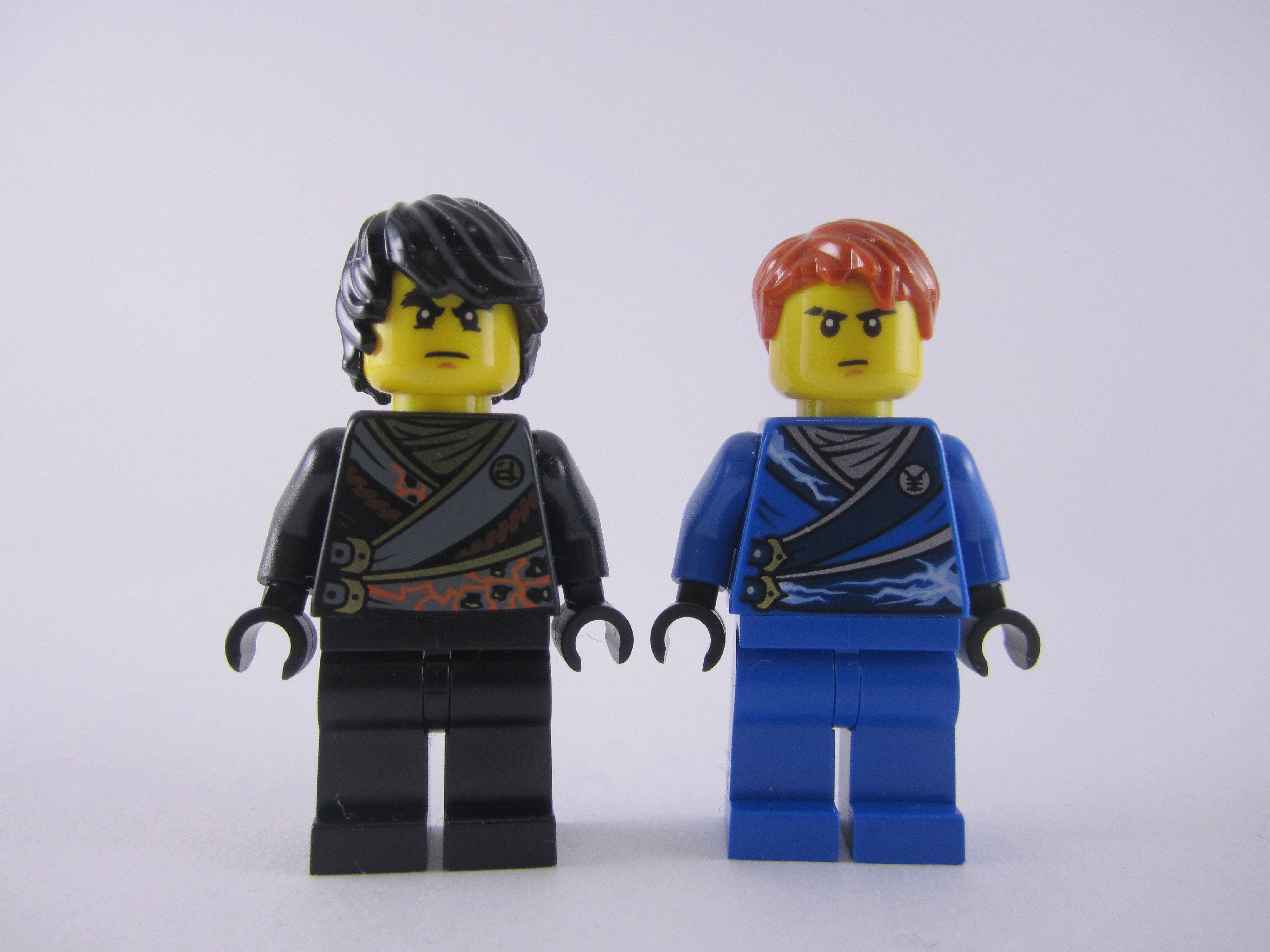 Here are their faces without the masks. Cole looks pretty angry  but I have to say I love Jay’s expression the most. He has this annoyed look of disbelief on his face. 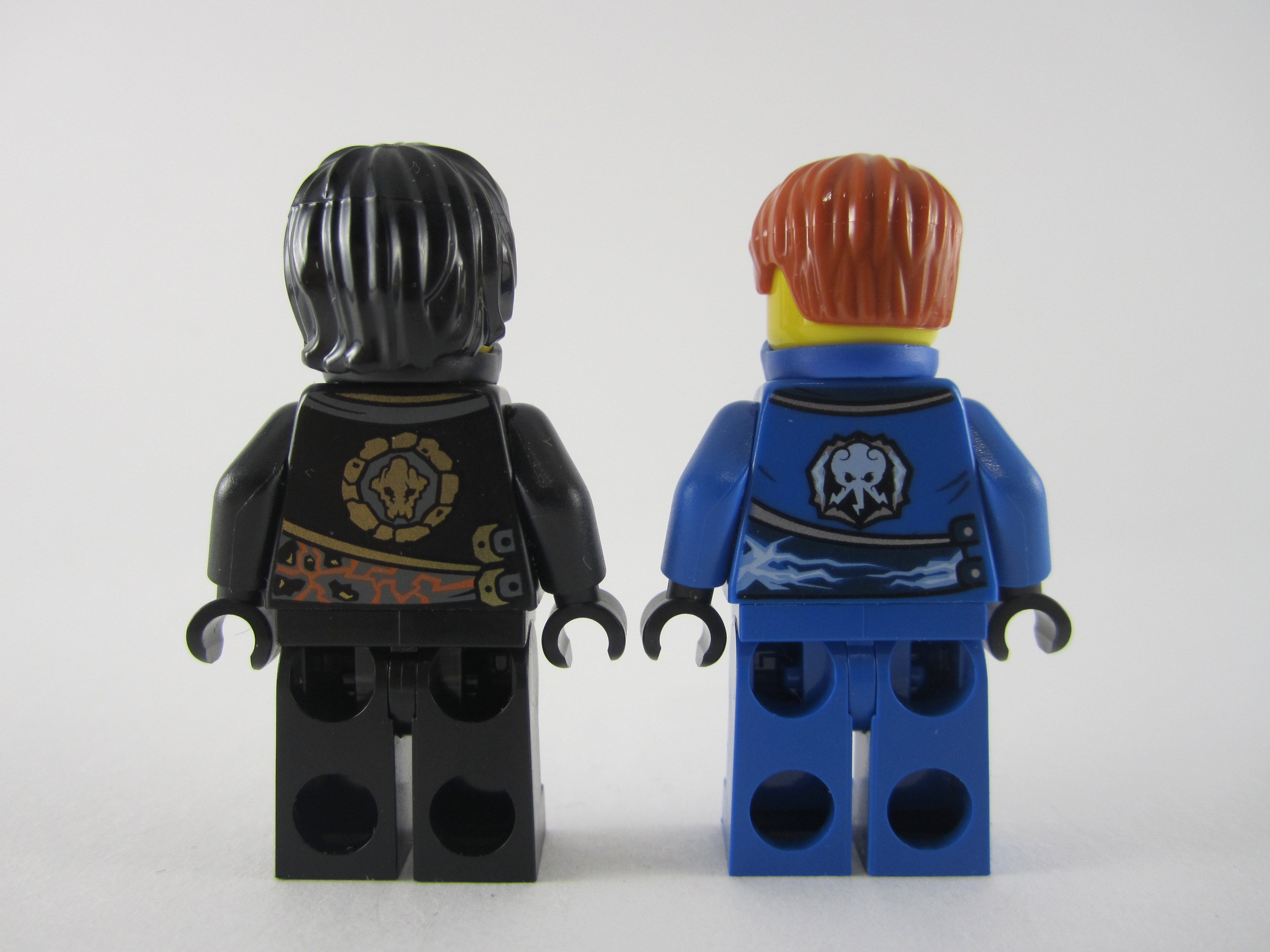 Here are the ninjas from the back to give you  a better look at the back printing. The logos on the back which symbolize which element each ninja is affiliated to (Rock for Cole and Lightning for Jay) is pretty cool, although Jay’s one looks like some sort of Thunder Squid. 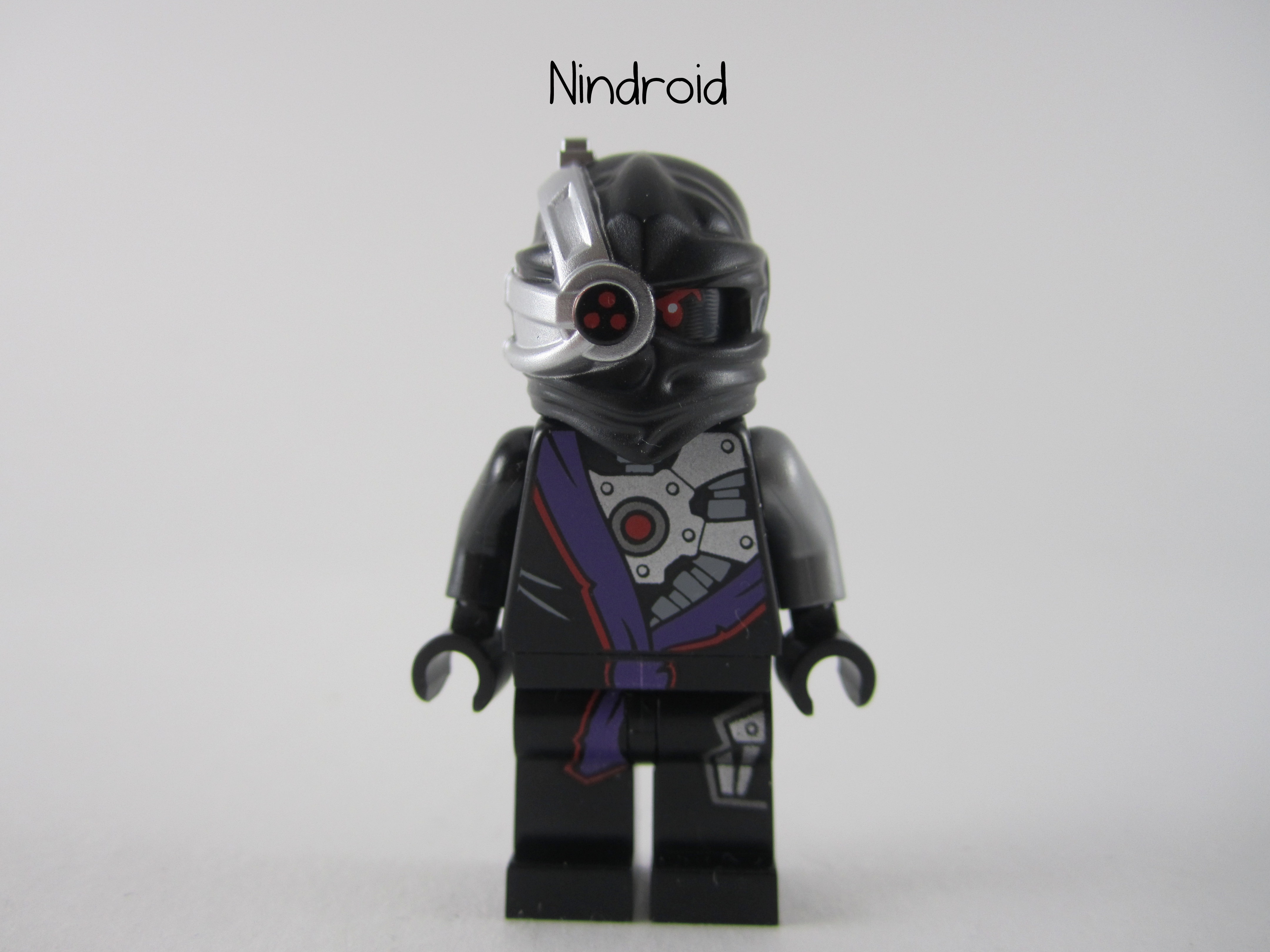 Introducing the Nindroid, the footsoldier bad guys in Ninja Rebooted. 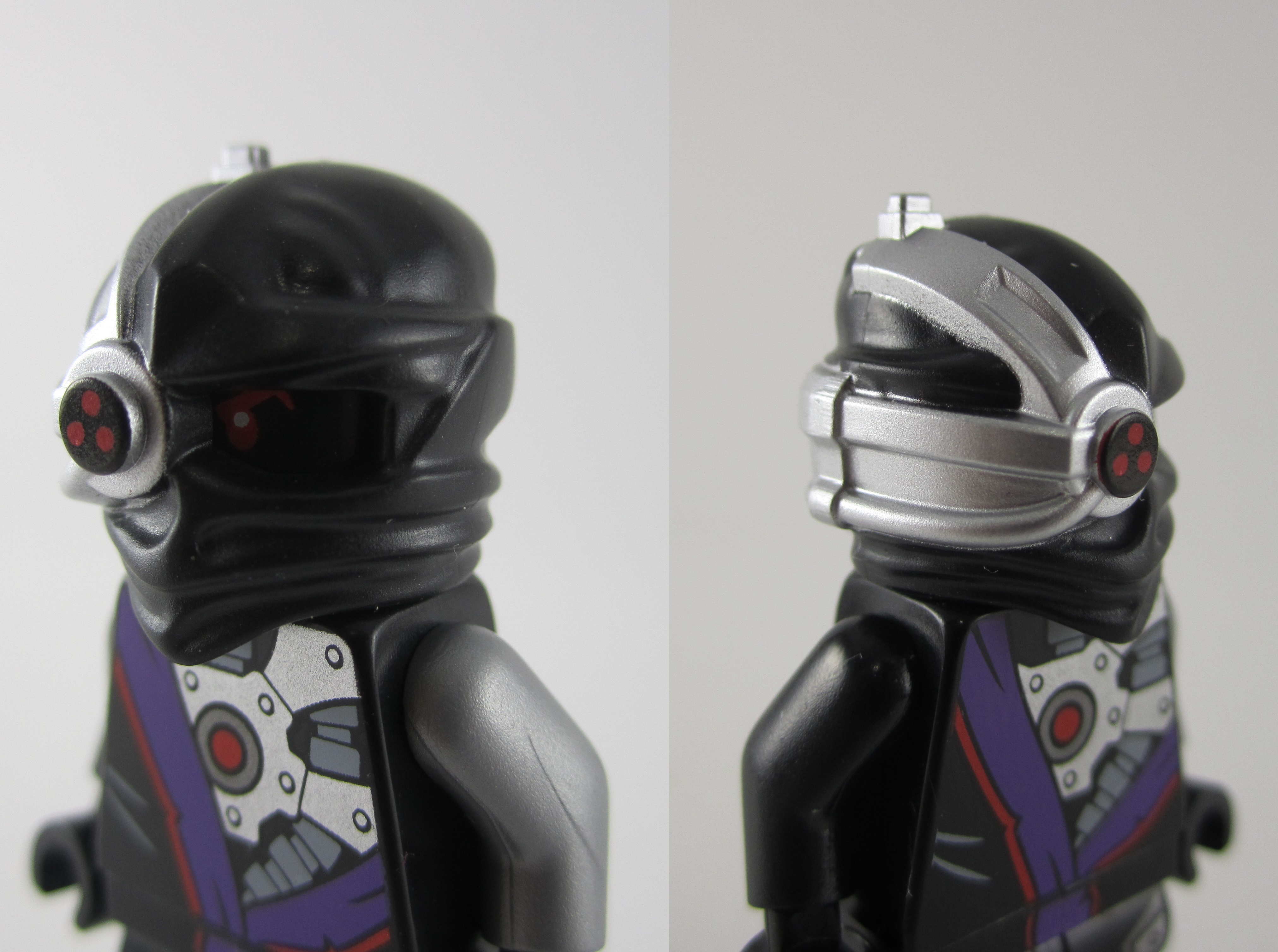 The Nindroid is pretty much a cyborg ninja with a bad ass targeting reticule on his (its?) right eye. The silver painting is a little wonky on the helmet but it’s not that big a deal to me. The helmet came in a separate polybag which usually means it came from a Chinese factory, so the slightly imprecise printing didn’t take me that much by surprise.

The Nindroid wears regular ninja apparel that reveals its cybernetic body, which borrows heavily from Iron Man’s suit design. Unlike Cole and Jay, the Nindroid has leg printing. I especially like the small tear on his left leg which lets a little robot leg peek out.

Like Jay and Cole, the Nindroid has some back printing. A bit more of its mechanical body peeks out from behind and you get a slightly obstructed view of the Nindroid’s insignia, which looks like a mechanical gear crossed between a shuriken. 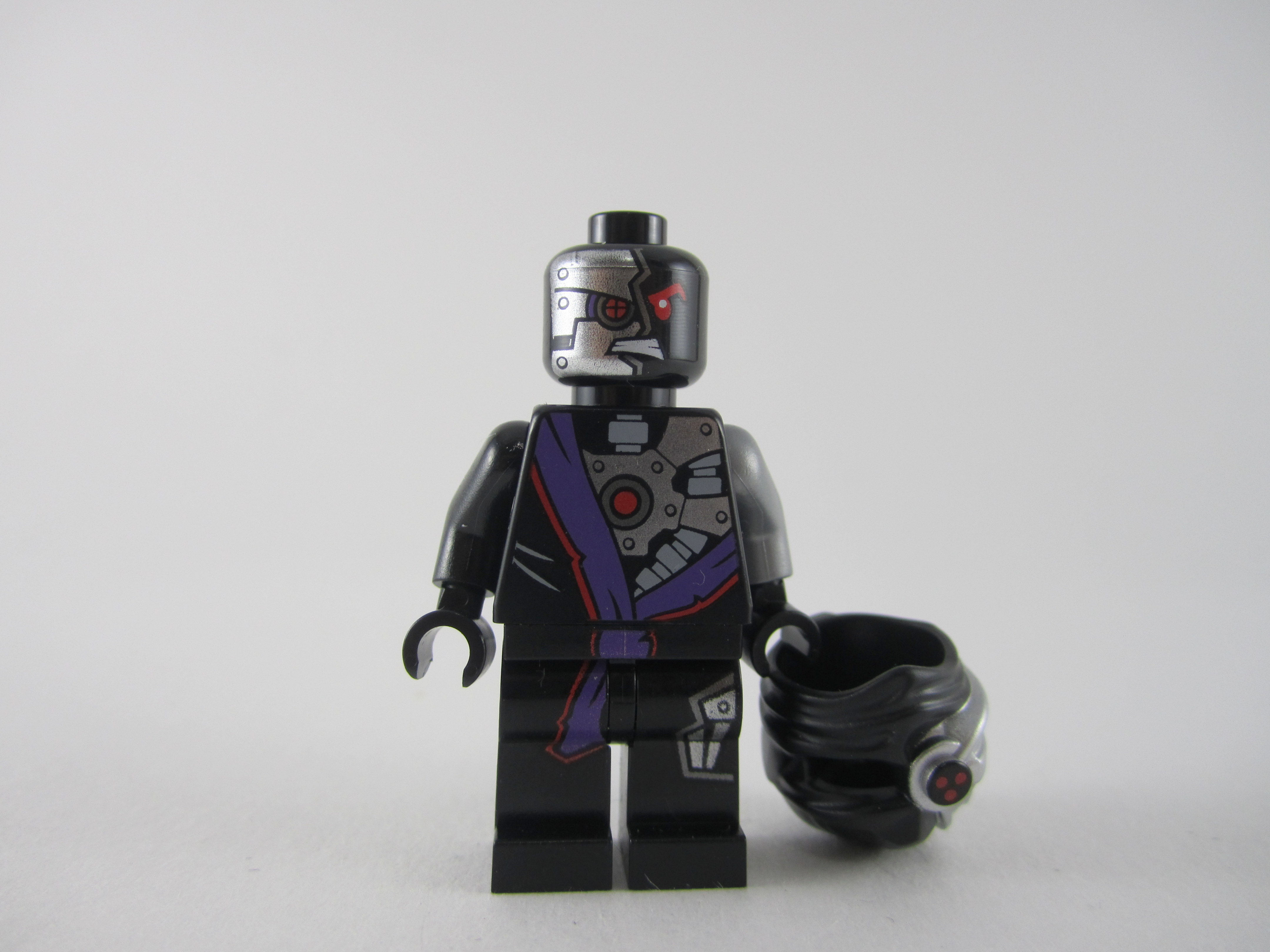 With the helmet off, you get to see the full minifig head which looks really good with half his face split to reveal its robotic insides. It looks great even without its helmet on. If only the other side of its head was the normal minifig yellow, it’d make a great Terminator minifig. 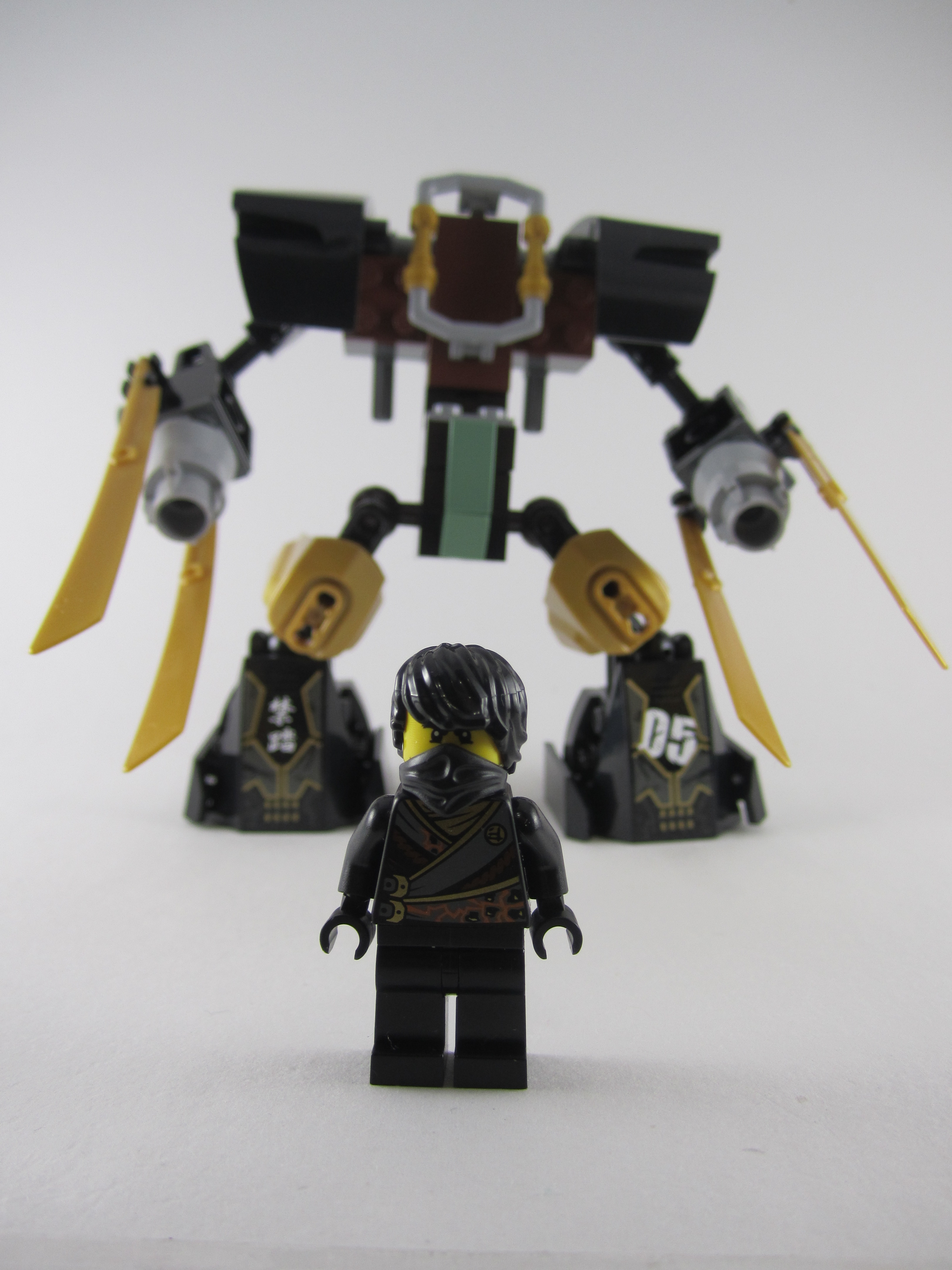 The first thing you assemble is Cole’s sweet exoskeleton mech. I hesitate to call it a full-sized mech since it looks more like an exoskeleton that enhance’s Cole’s fighting capabilities rather than a fully enclosed mech. In many ways it’s very similar to Lex’s Power Armour. 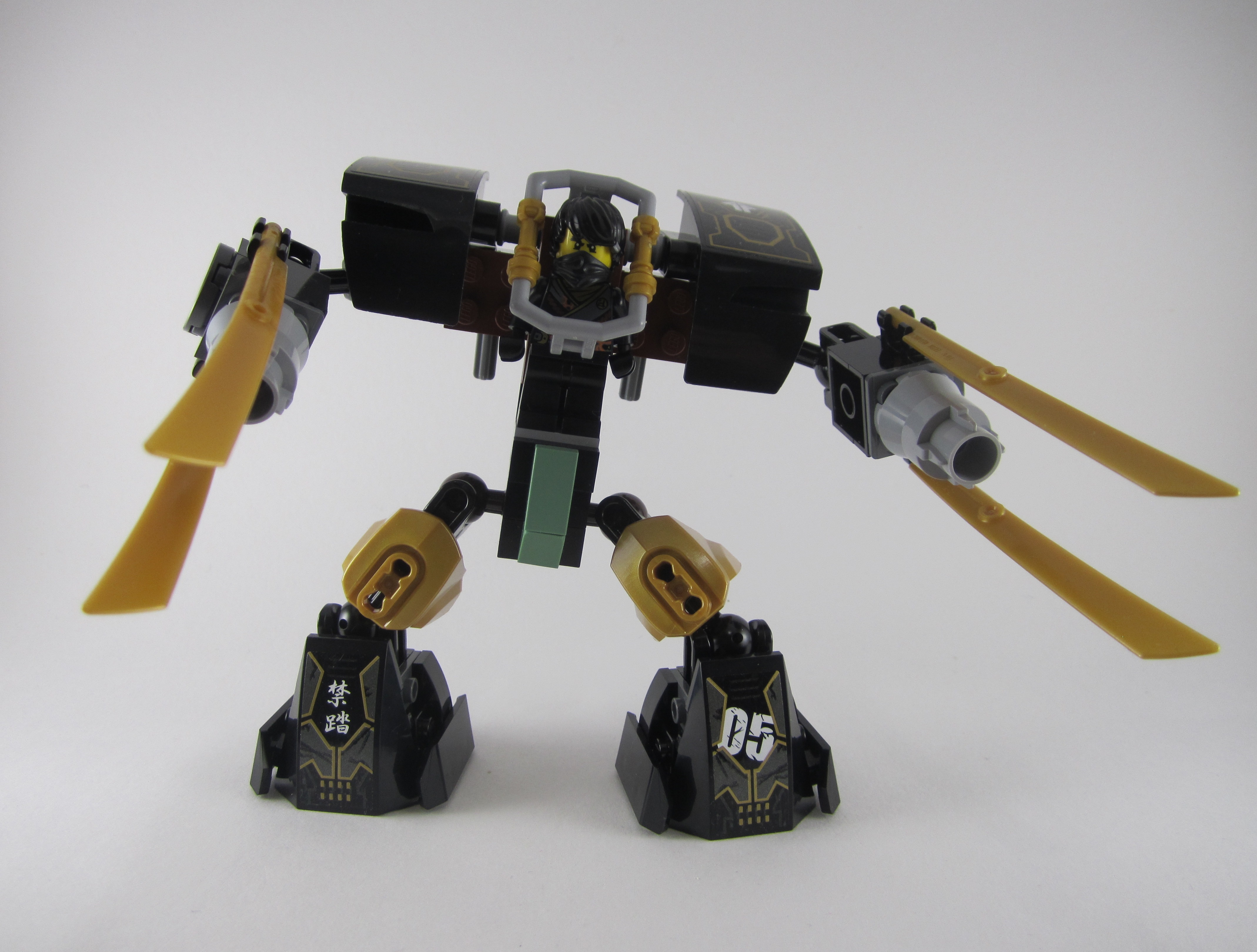 Even though it’s on the smaller and skinnier side, I really like the overall look of it. The black and gold accents go remarkably well together. Cole occupies a tiny space in the mech’s chest, strapped in by what looks like a roller coaster safety harness. In a sense, it’s a very mininalistic looking mech without too much bulk – which works out since it’s meant to participate in sword fights and be as mobile as possible. 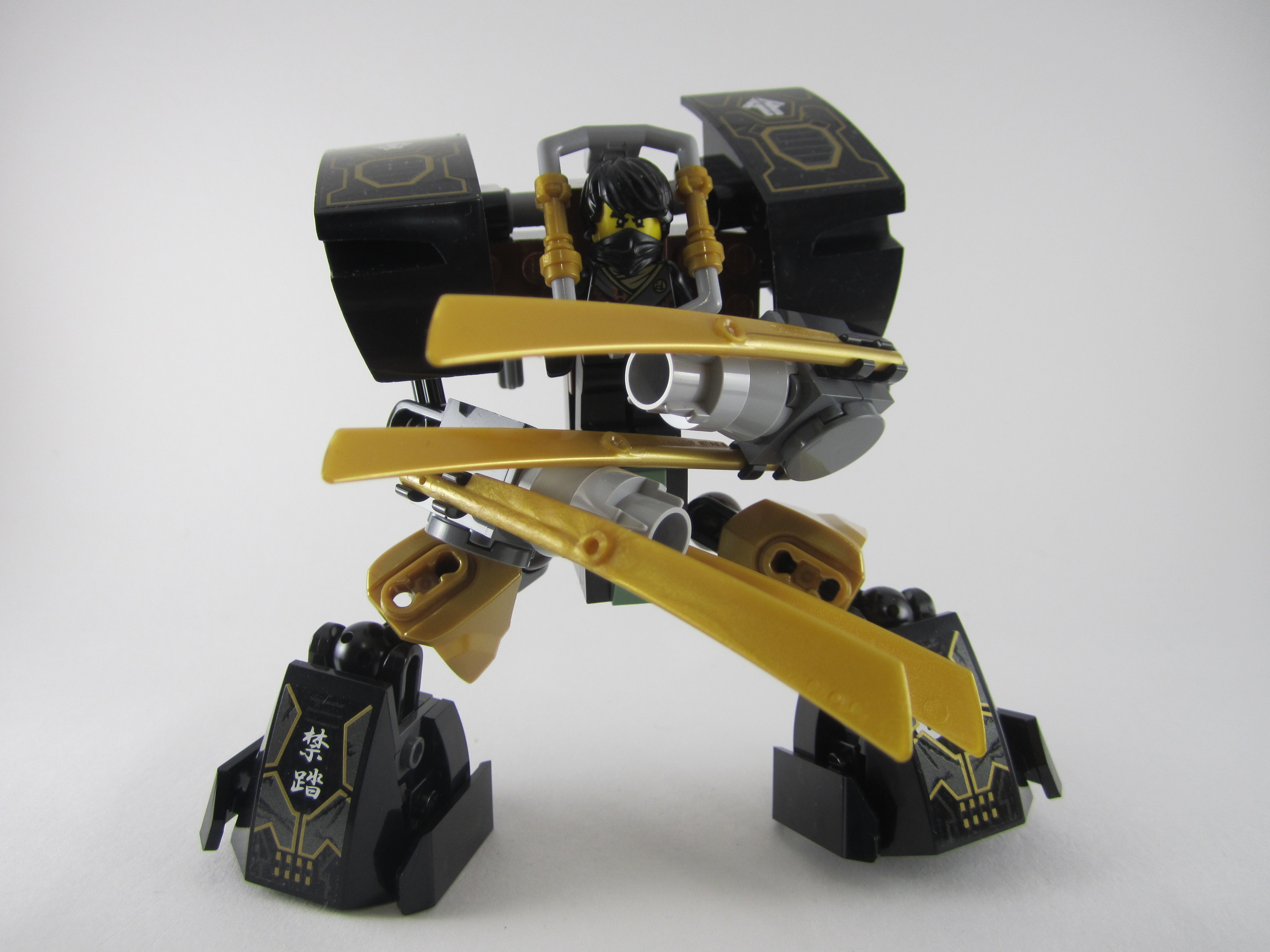 Another reason why the exoskeleton looks great is the scaling. With Cole placed in the middle, the mech’s arms are positioned perfectly to make it look like it’s an actual extension of Cole’s body. Ditto for the legs as well. That’s a key ingredient in making exoskeletons look great, because you don’t want the entire body to consume the pilot. A great looking exoskeleton always tries to look like it’s an augmentation of the user’s body, which this one achieves remarkably well. 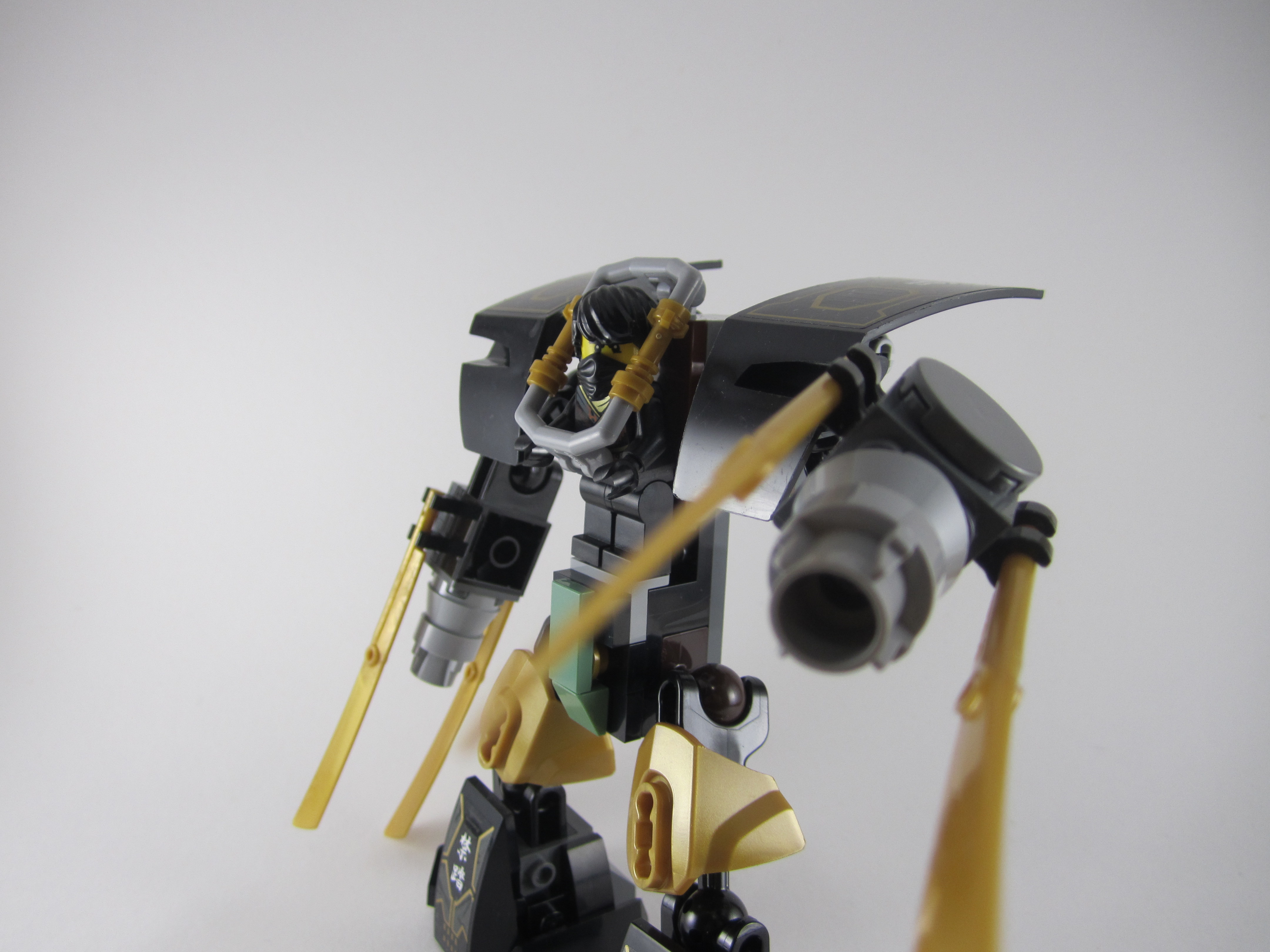 I like the weapons that Cole’s mech is packing. Twin giant blades and what looks like a Megaman-esque hand cannon on each arm. For a tiny mech, it packs quite a huge punch! 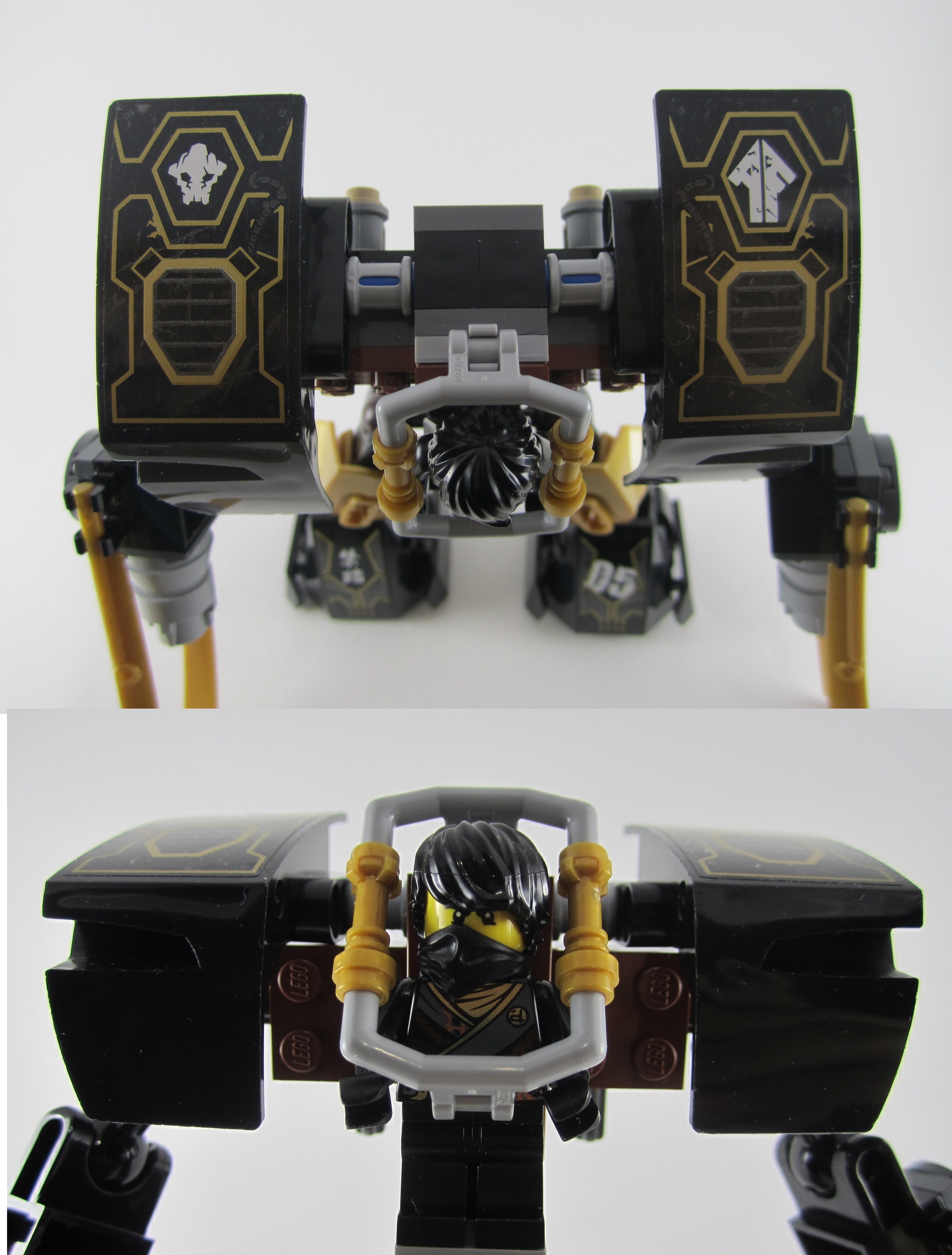 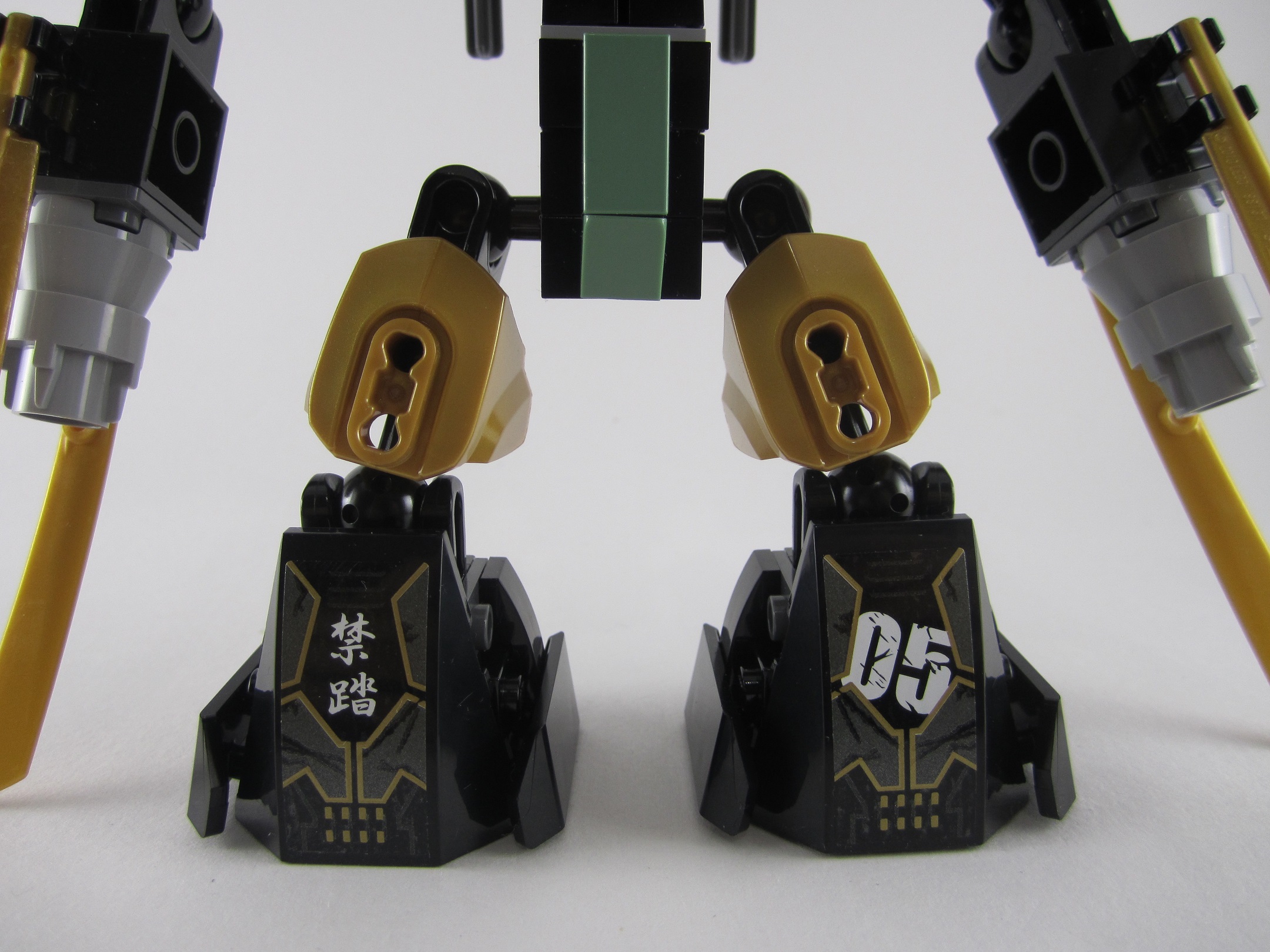 Stickers get a lot of hate from Lego fans but I think if applied well (heh) they actually make a set look a lot better. Cole’s mech makes great use of stickers, using them to give the build more character. It also helps that the stickers are transparent so they seamlessly blend in with the plastic. They’re really more decals than they are stickers. 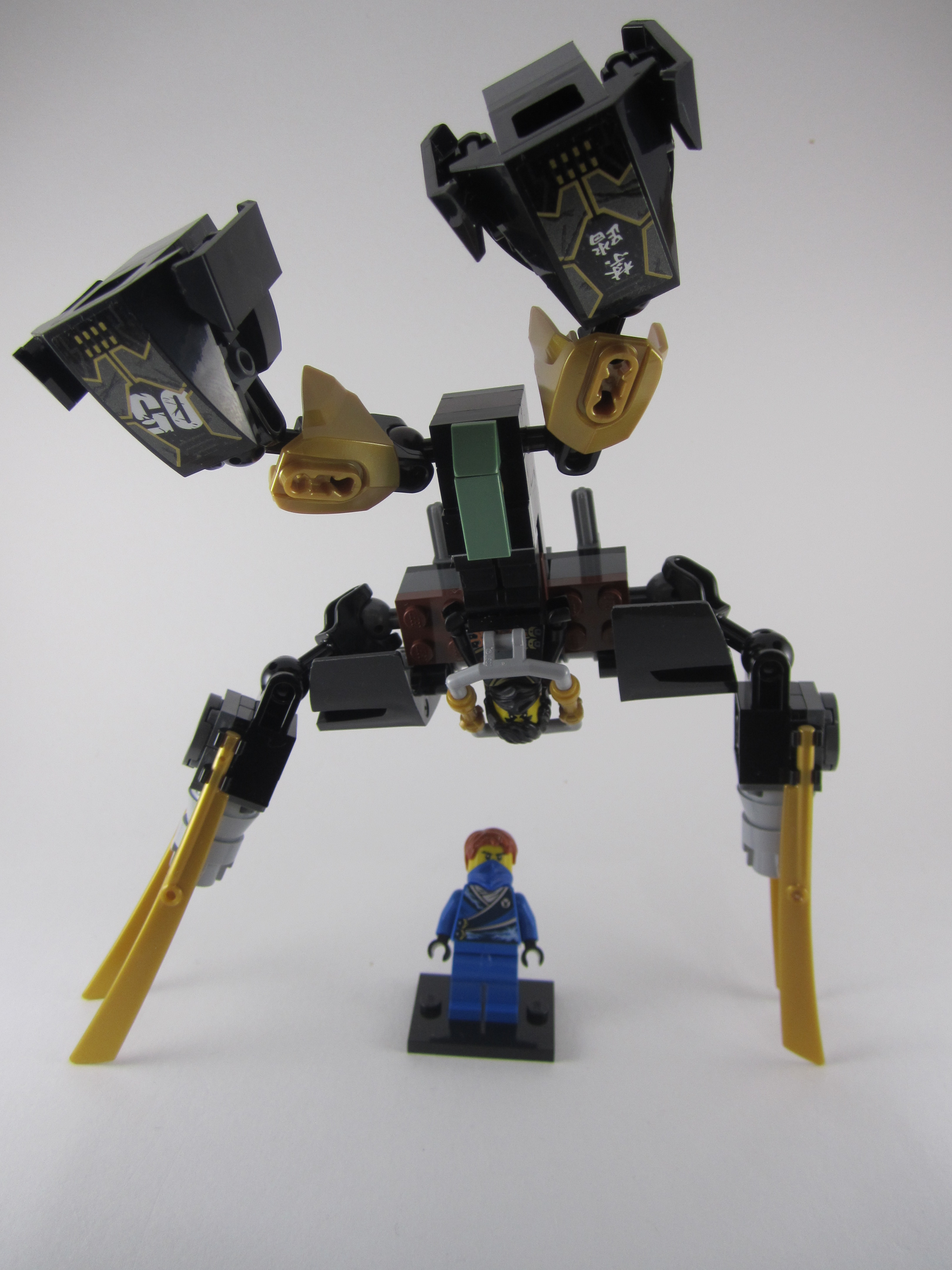 Have I mentioned that the exoskeleton mech is really flexible and poseable? 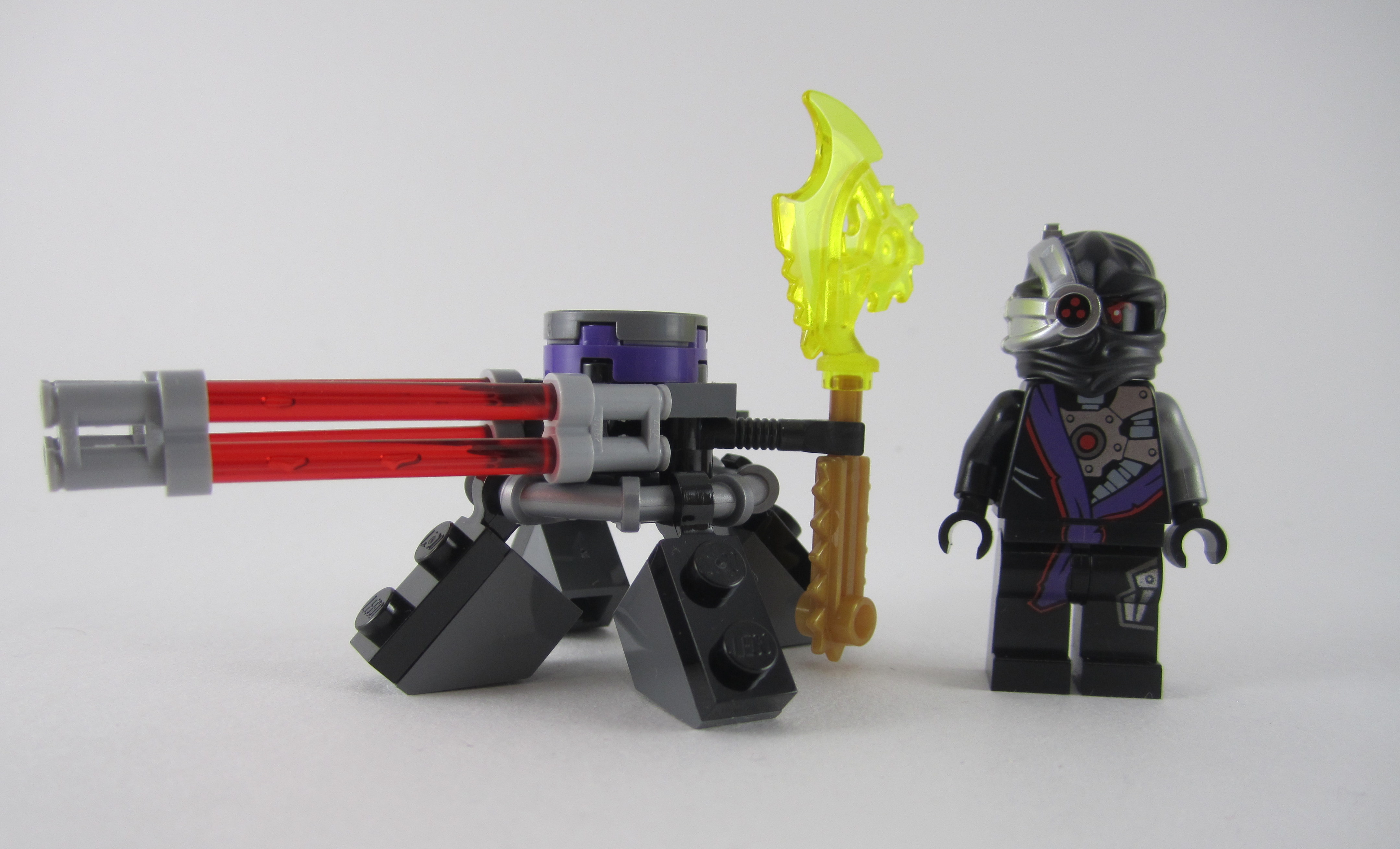 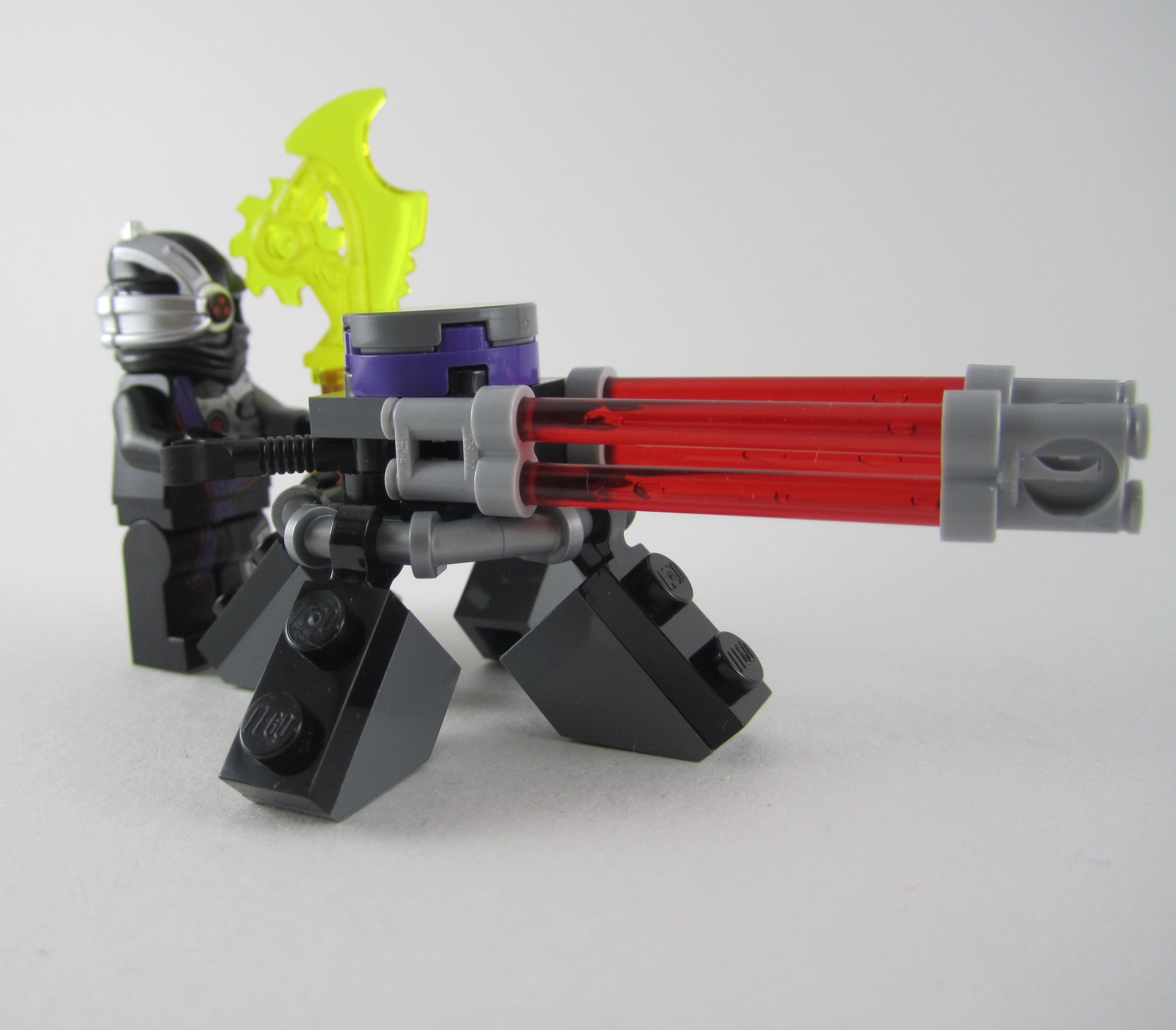 The laser turret looks pretty cool with the red transparent tubes but in reality is quite fragile. The “laser beams” are pretty loosely attached to the main turret piece using a binocular piece. Expect them to constantly dislodge themselves pretty often, which is a major annoyance if you intend to move it around a lot. 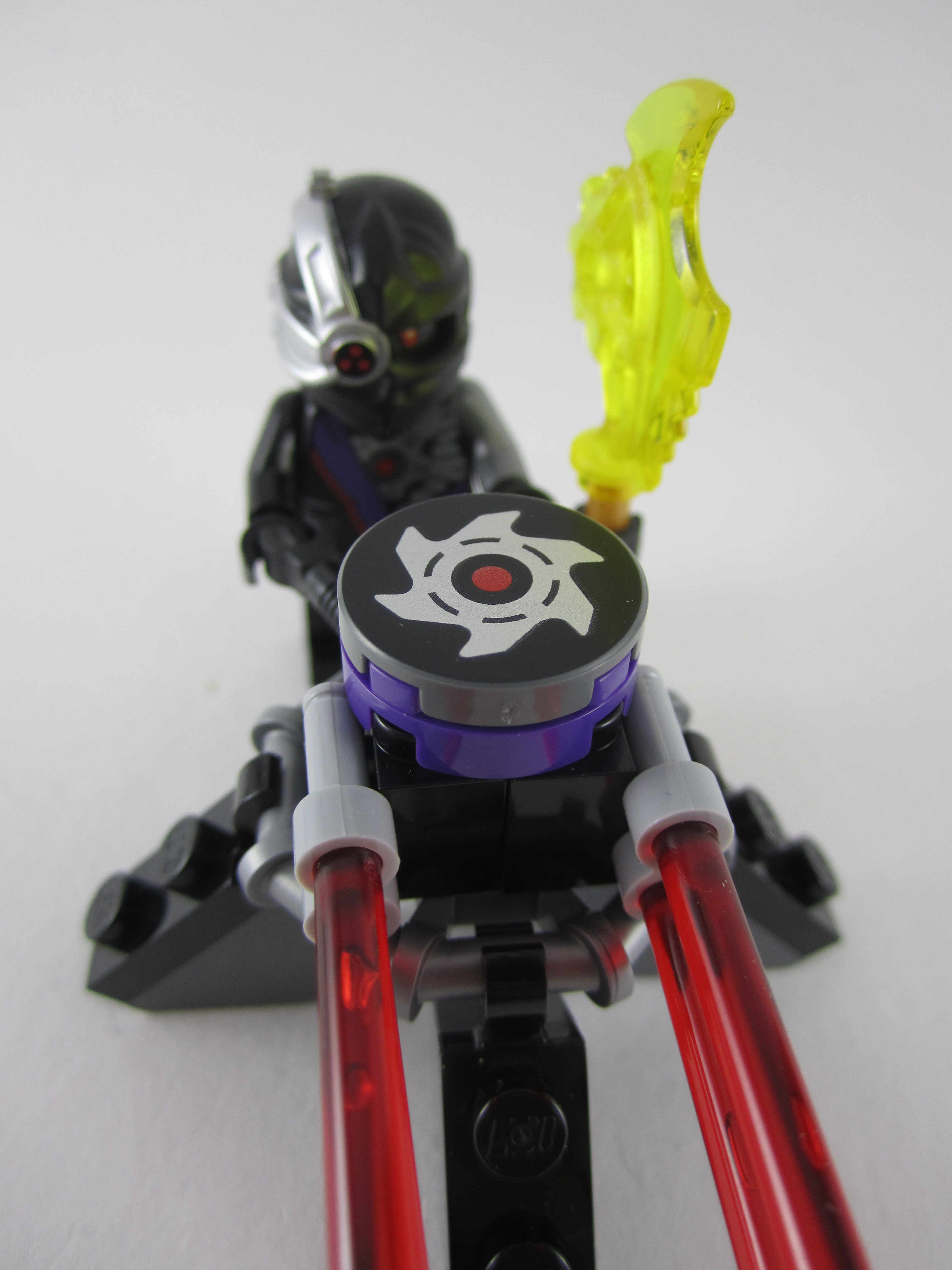 Another pleasant surprise is the inclusion of a printed tile on the laser turret. Printed tiles are always nice. 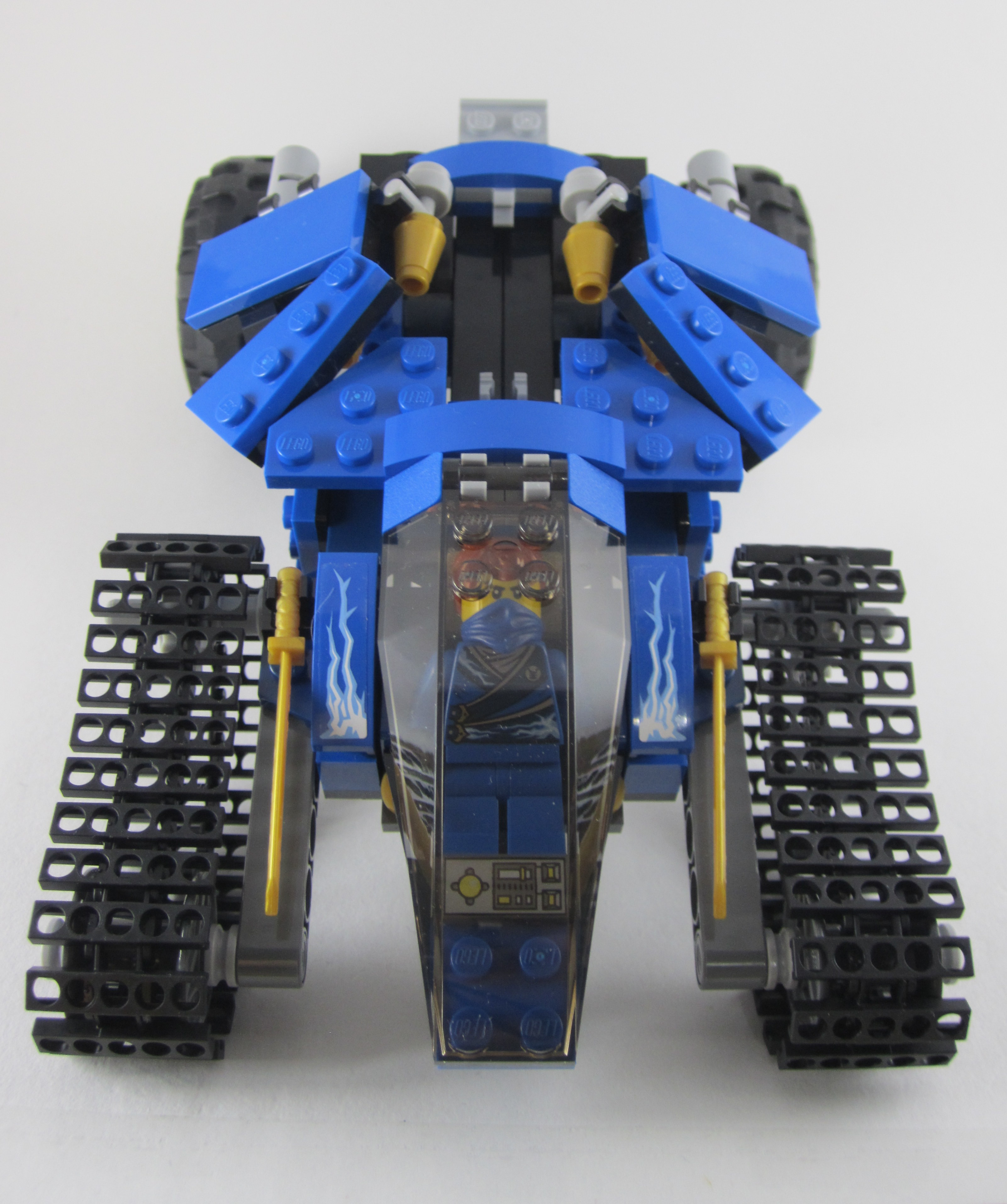 On to the main course, Jay’s pimped out ride – the Thunder Raider. It’s a decent sized vehicle, with treads on the front followed by ridiculously large back wheels. 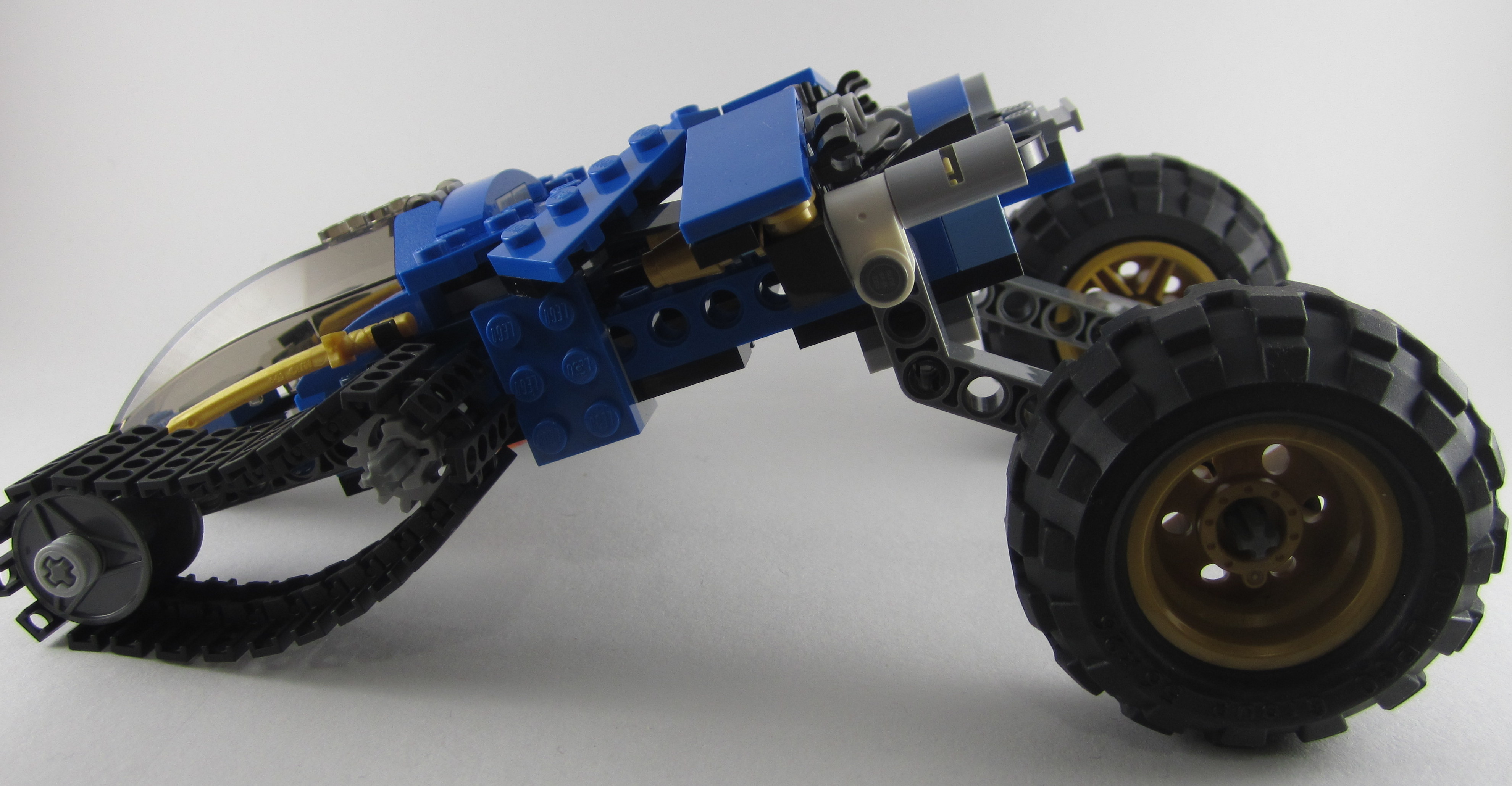 From the side, it looks especially comical. The back wheels stick out quite a bit but I think is completely necessary to achieve the “lifted backside” look that the Thunder Raider is trying to go for. 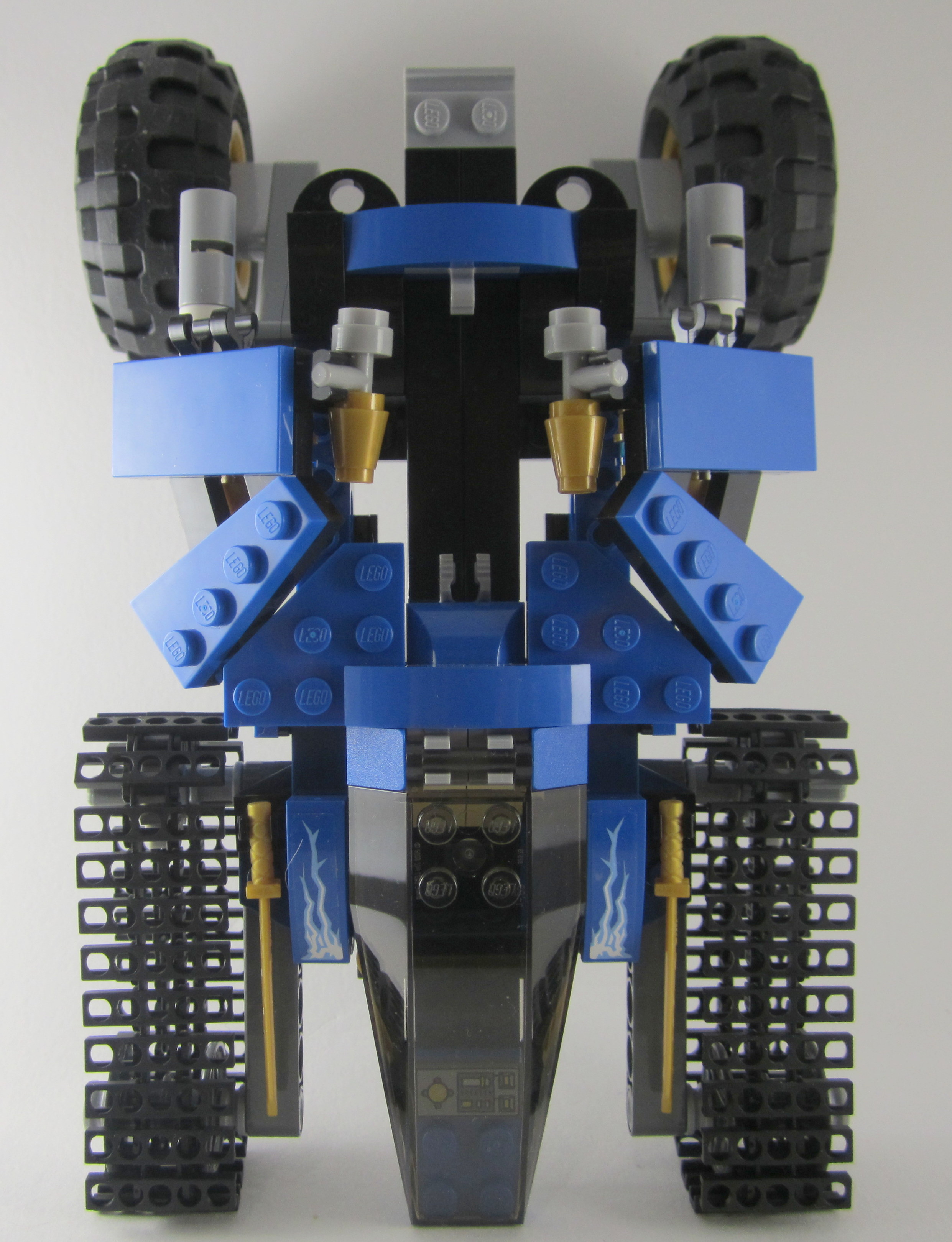 Overall, I think it’s a nicely designed vehicle. Not too large and not packing any unnecessary features. It’s pretty well balanced as a vehicle, despite the huge back wheels. Jay has a pretty comfortable cockpit where he’s placed lying down. I can’t imagine how he accesses the little console in the front but hey, I guess when you’re a ninja, common sense doesn’t apply to you. 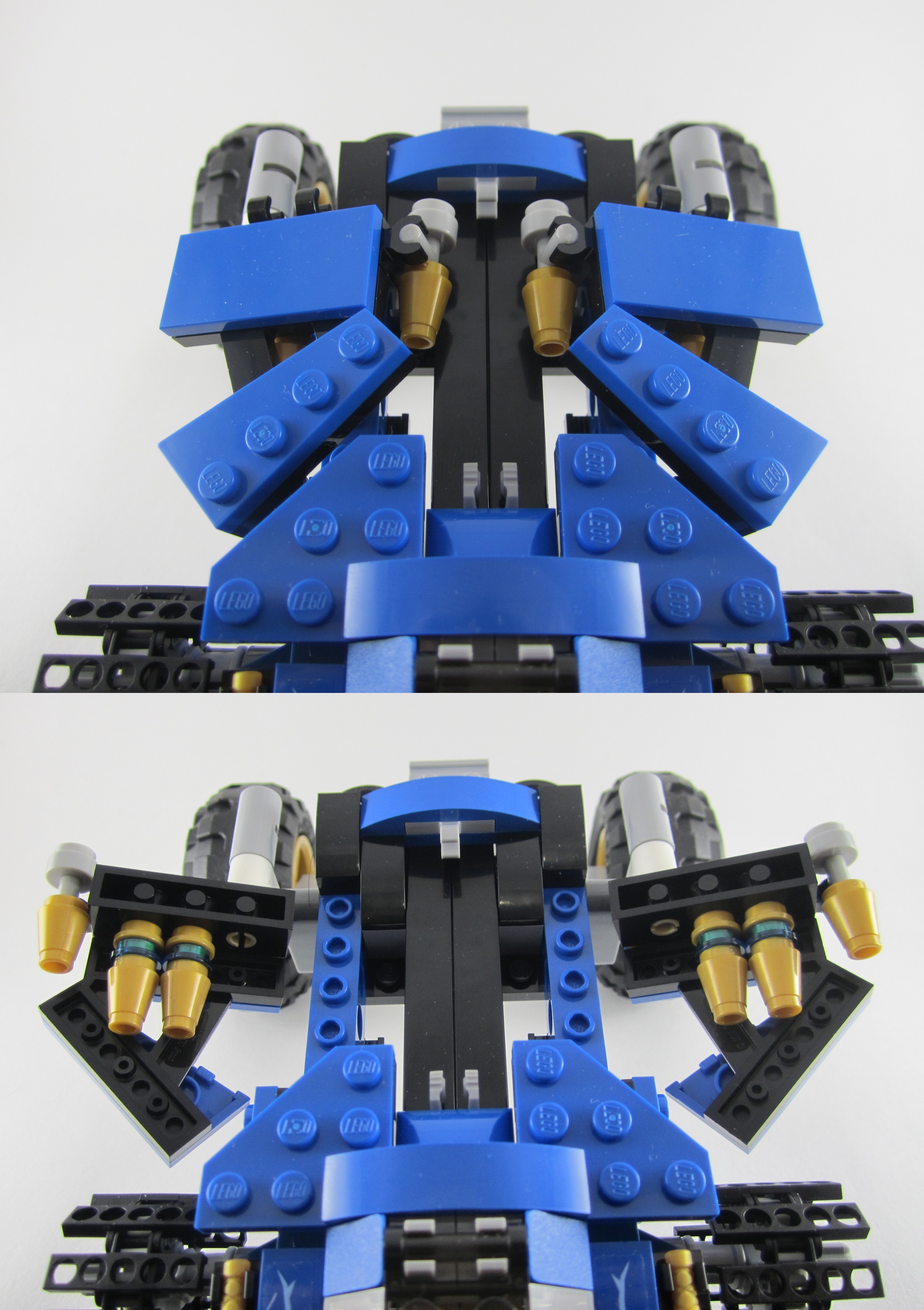 I’m a kid at heart so the weapons on the Thunder Raider absolutely delighted me. There are 2 flaps that pop open when you push in the cockpit, revealing a bunch of missiles hidden inside. No flick fire missiles here. These are purely cosmetic and look great that way.

This is my favourite feature of the set. I’m normally quite unimpressed by play features that are often forced into sets but this one is just so cool. The whole act of pushing the cockpit in and seeing and feeling the missile flaps pop out is incredibly satisfying! Not to mention that it looks really slick.

If you have a young boy or girl that’s crazy about Ninjago, he or she is going to want to see this set in action. 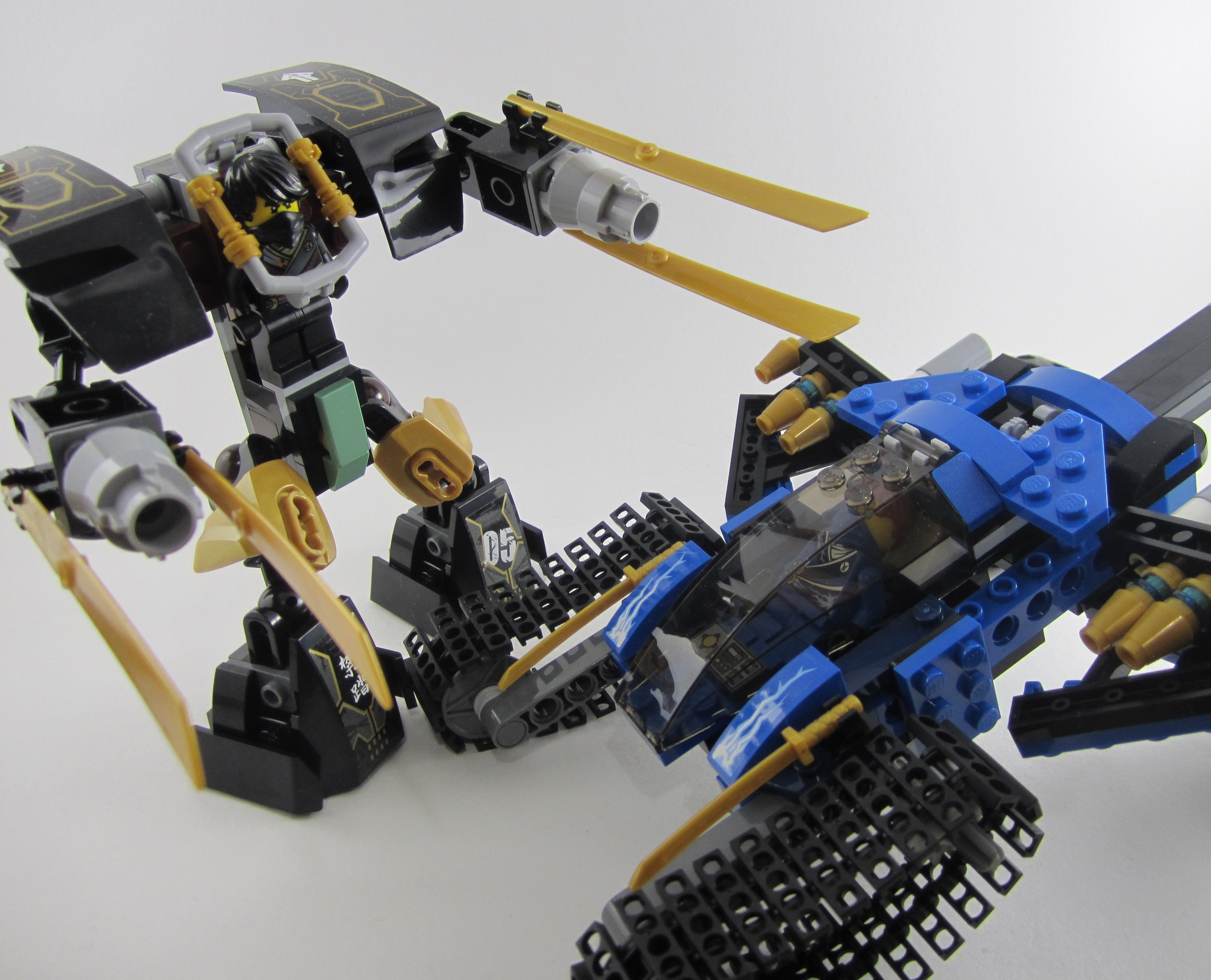 Final Thoughts: I love that Ninjago is back. The theme has traditionally been very well received, especially by younger boys. I’ve also always liked the direction that Ninjago took with their builds, focusing on cool vehicles and characters. I found this set very enjoyable to build as it had some pretty neat features which I loved putting together. Mechs and exoskeletons are always nice to have around especially if you’re planning to display sets since they’re so poseable. Sticker use is kept to a minimal and really only used when needed. I think that Ninjago Rebooted spells a maturity of the theme – maintaining the heritage and identity of the Ninjago theme while taking fans into a whole new technology infused direction.

Should You Buy It?: If you’re a huge fan of Ninjago, you’ll be very pleased with this set. If you have a young son or relative, he’s going to be ecstatic with this set. This is a great buy if you want something fresh or if you like building wacky vehicles. You get a ton of variety with this set, having to build both a mech and the Thunder Raider. It may seem a little pricey at AU$50 and only 300+ pieces, but I feel that you get pretty good overall value and a nice selection of parts as well.

Try to keep your eye out for a 20% off sale that Myer and Target regularly have. That’ll be a great time to pick this up.