It’s been awhile since The LEGO Movie came out in the theatres and while I’ve been steadily accumulating a number of sets from the movie, I’ve been quite slow in assembling the sets and reviewing them. In fact, the last set I reviewed was 70807 Metalbeard’s Duel, WAY back in April!

The LEGO Movie has gifted us with some really inspired and unique sets and I hope to find time to review most if not all of them. First up, here’s the review of one of my favourite sets from the theme, Unikitty’s abode, Cloud Cuckoo Palace! 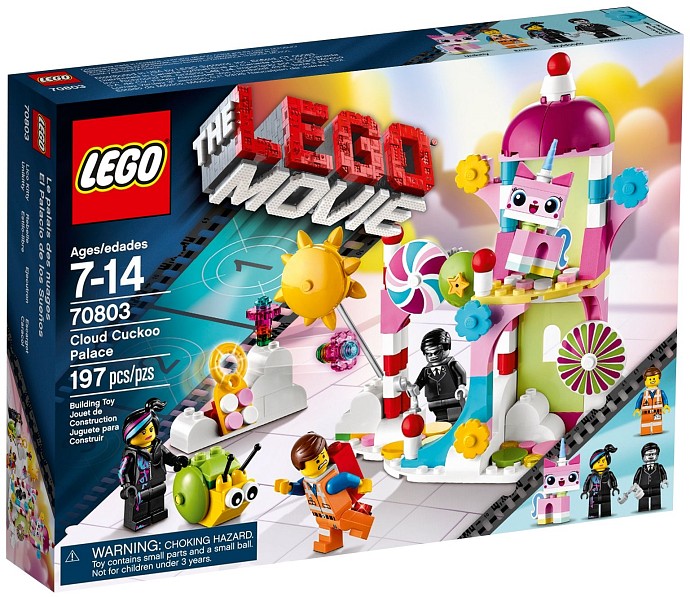 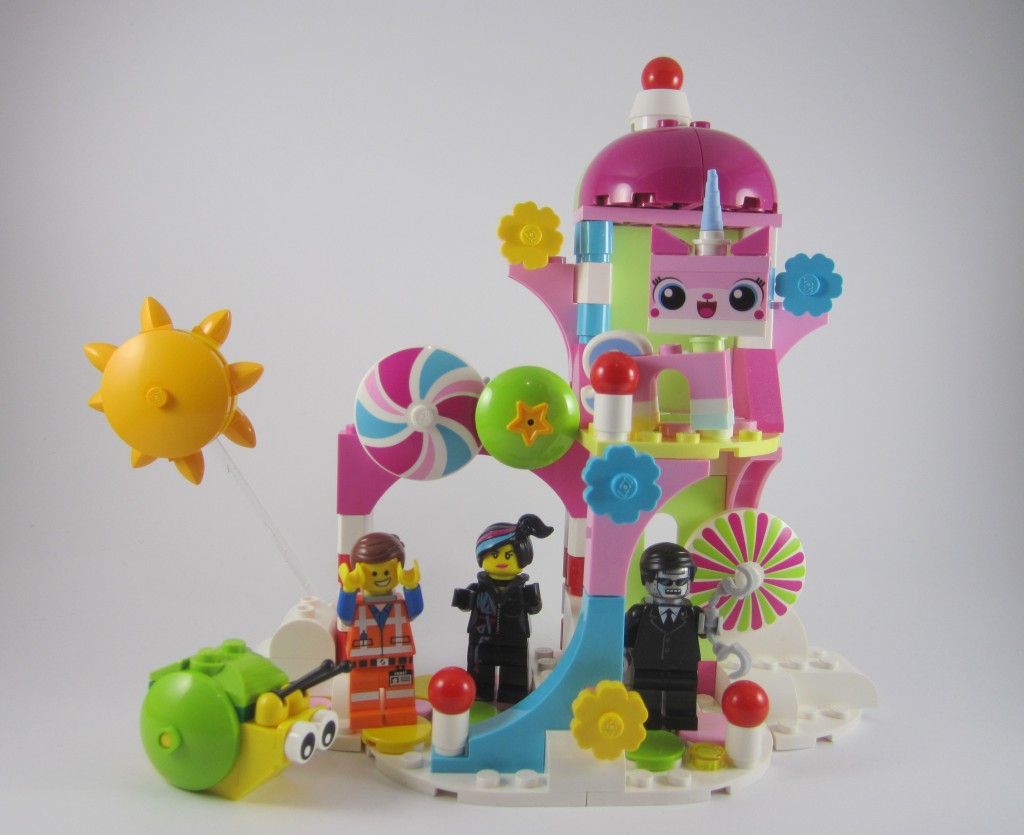 Wow! Look at the colours! It’s as if an ultra-cheery half Unicorn, half kitten Princess of a multicoloured cloud kingdom threw up a bunch of multi-coloured LEGO parts and inadvertently created this hodge podge bunch of wild and wacky bricks. As a matter of fact, that description is quite apt for Cloud Cuckoo Palace, the second smallest LEGO set from The LEGO Movie theme.

Cloud Cuckoo Palace is the abode of Princess Unikitty, the benevolent hyper-positive denizen of Cloud Cuckoo Land, perhaps best known as the capital of rainbows and puppies. LEGO aptly describers her as a “half anime kitten and one endless dance party” which is a pretty darn good summary of Unikitty, who is voiced by the immaculate Alison Brie.

Cloud Cuckoo Palace was one of the few sets that I knew I had to own when I first laid eyes on it simply because of the wacky colour-scheme, which is quite a rarity with LEGO sets these days outside the Friends theme, of which I’m also a huge fan of. Now that I’ve put it together, let’s see if it lives up to the hype. 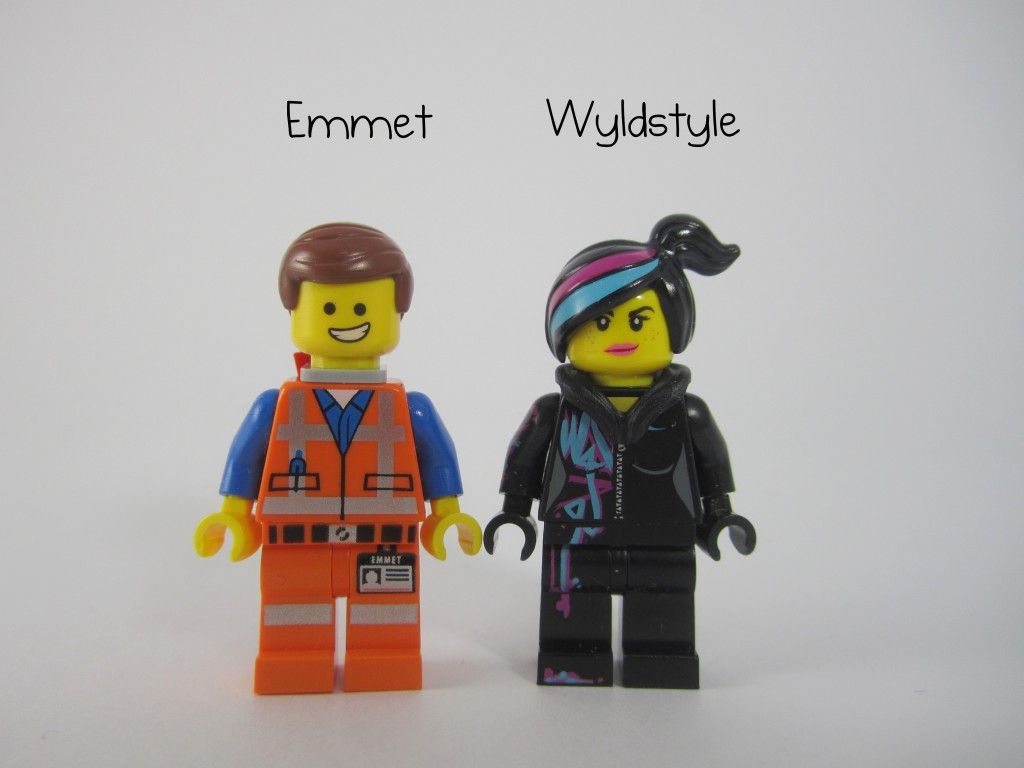 For the good guy minifigures, we have fairly exclusive versions of Emmet and Wyldstyle, the two protagonists of the movie. Although we’ve pretty much overdosed ourselves on Emmet minifigures since he’s the main character, it’s nice that LEGO has at least given us several incarnations of him. Emmet in this set sports a huge grin and is fairly rare, only making an appearance in the promotional Piece of Resistance polybag and Metalbeard’s Sea Cow.

When putting this set together, you also attach a red 1×1 stud to the back of his leg which you may remember as the homing beacon that was planted on him which led Bad Cop’s forces to Cloud Cuckoo Land. Emmet also has an alternate face that looks like a cross between worry and terror which you can see below. 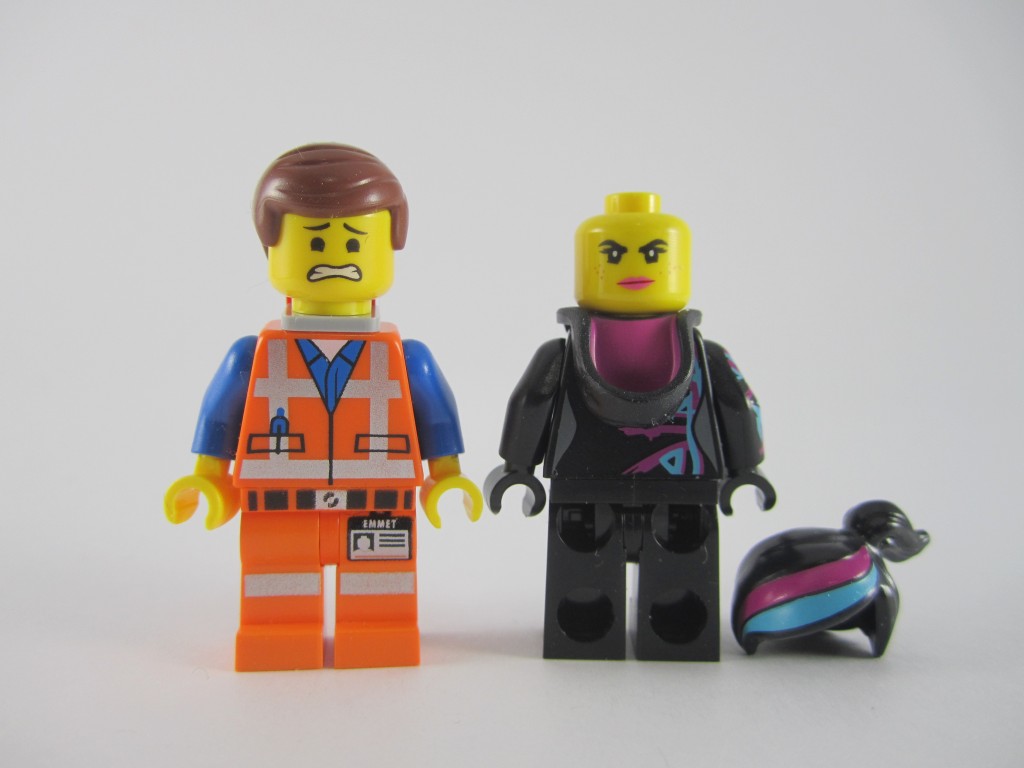 Like Emmet, this version of Wyldstyle which has a neat little hood accessory on her neck and like Emmet is also fairly exclusive, only showing up in 70807 Super Cycle Chase, Metalbeard’s Sea Cow and an obscure polybag, Micro Manager Battle which I’ve never seen before. Her torso, legs and head are similar to the one in 70801 Melting Room, but the presence of the hood piece, which is a rubbery accessory that goes in between her head and torso is fairly cool and makes her character look pretty edgy and 3-dimensional. With the characters being so likable, I really don’t mind multiple copies of each of them. 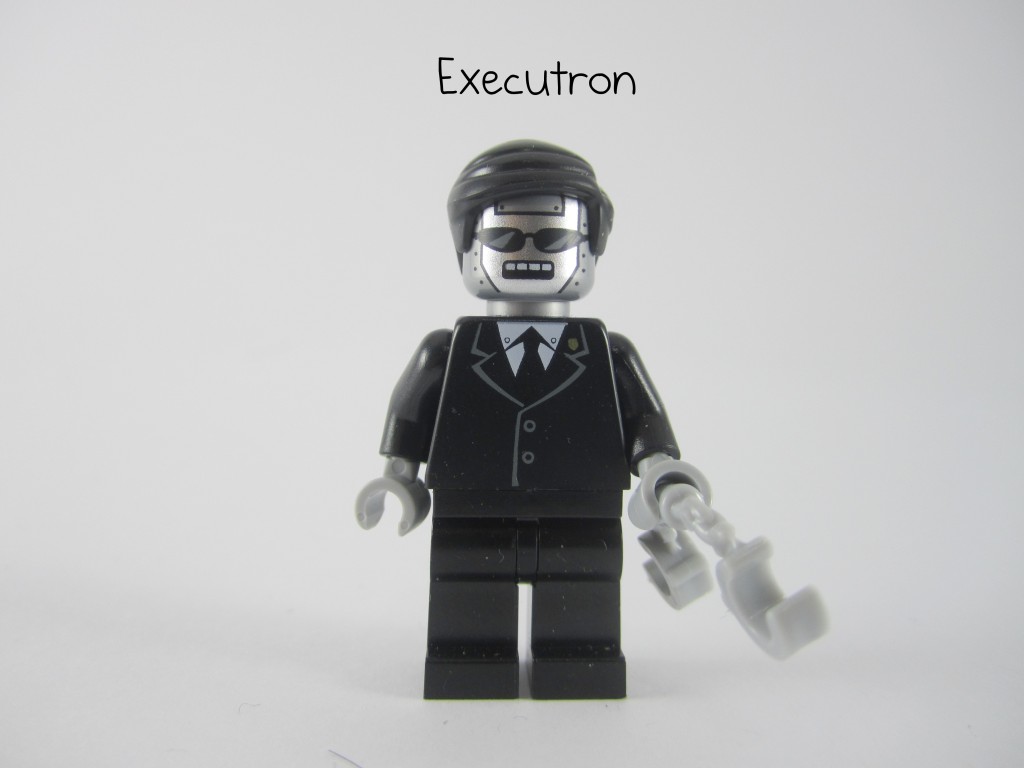 You can’t have good guys without baddies, and in Cloud Cuckoo Palace, we have yet another one of Lord Business’ henchmen, Robot Fed AKA the Executron, one of the many office drones/secret service goons. Robot Fed is a cool take on the USA’s secret service, with the sleek black suit bearing a small communicator piece in the form of a boutonniere.

Unfortunately, he lacks back printing but that’s offset by a very professional looking side-parted hairdo, a stylish pair of sunglasses on top of a very metallic minifigure head, Executron makes a great addition to Lord Business’ robot army. Robot Fed is exclusive to this set which is a nice little bonus to an already great set. 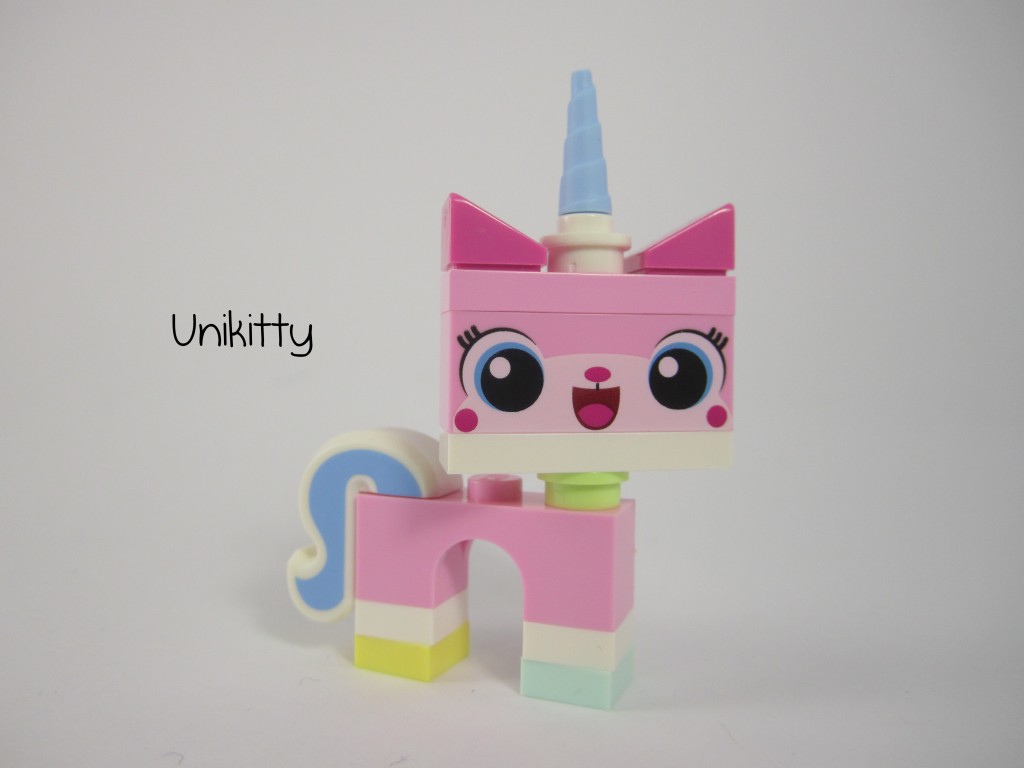 The star of this set is undoubtedly Princess Unikitty herself. She’s almost entirely brick-built with unique parts in the form of her printed tail piece, light blue unicorn horn and beautiful printed face piece which sports Unikitty’s trademark happy anime-inspired kawaii grin. I really like that they made her as colourful as possible, generously employing the use of  pastel coloured bricks for her hooves and neck. Being one of the major and more memorable characters from The LEGO Movie, this is one of the most affordable way to get Unikitty in her classic original form. 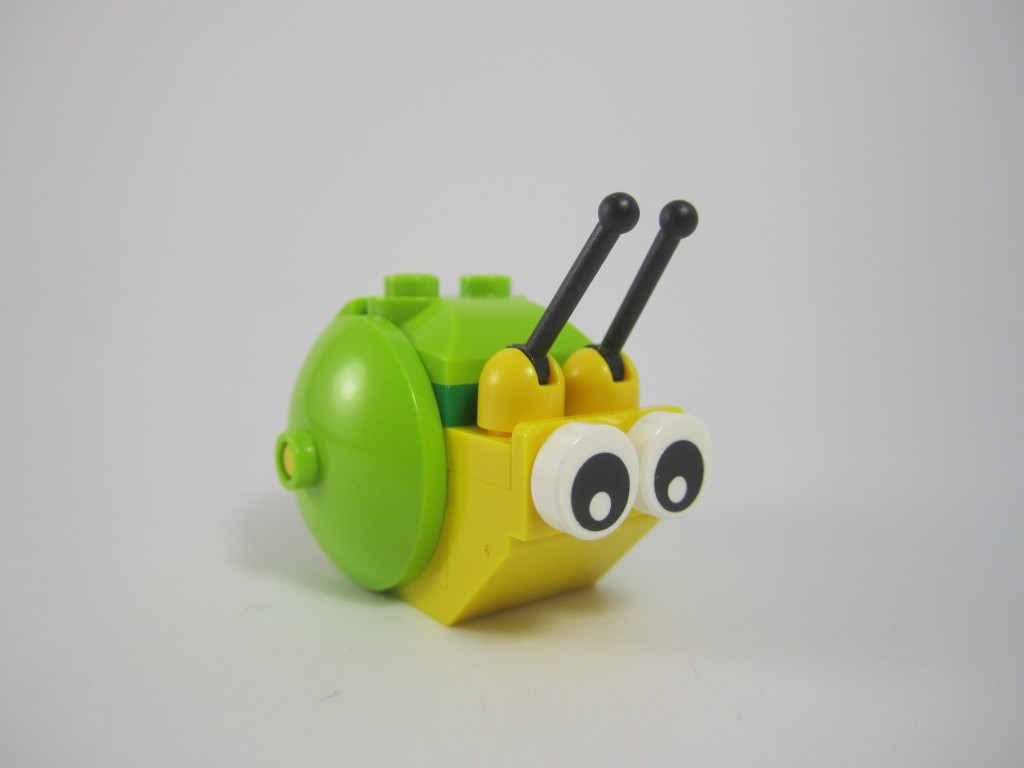 Cloud Cuckoo Palace starts off with you assembling this cute little snail, which you may remember from the movie. It’s quite an adorable, compact little snail made out of bright yellow and green, accentuated by the printed 1×1 round eye tiles and charming use of antennae pieces as its feelers. 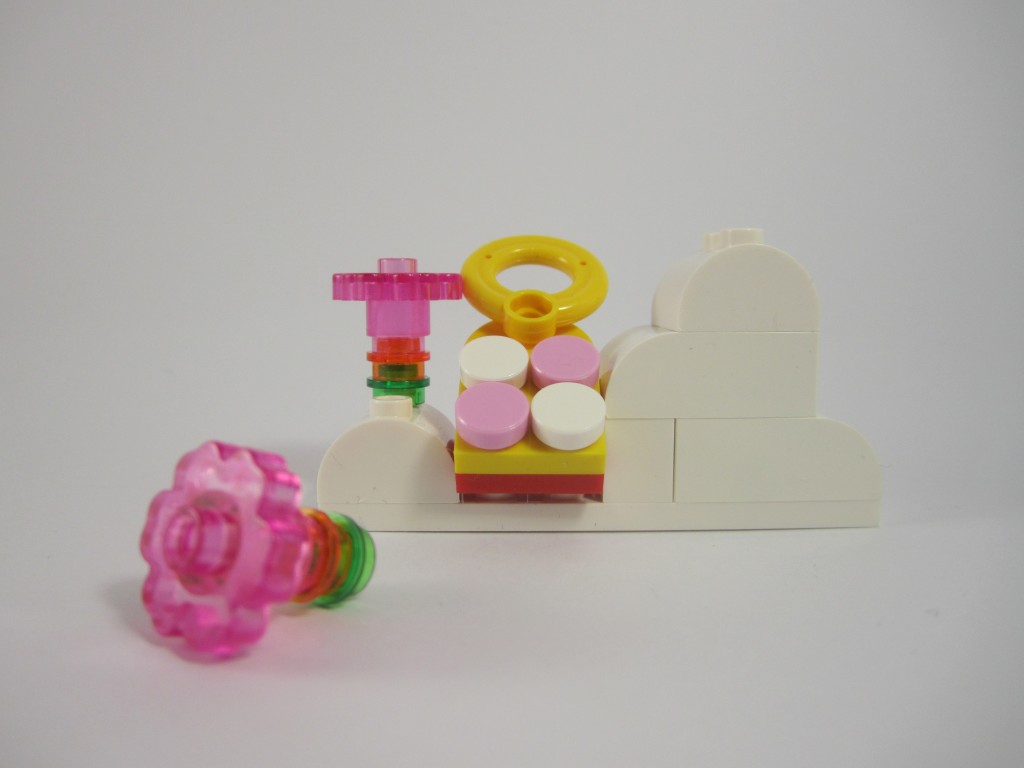 The next structure you put together is a small cloud-shaped catapult with a rather interesting choice of ammunition – transparent pink classic flower pieces. Personally, I’ve not seen this particular piece in a while, even more in transparent pink form, which I think is pretty cool. You get two of these “flower projectiles”, which comfortable fit into the catapult which you can easily launch into the air for a short distance. This entire structure feels like an optional addition to Cloud Cuckoo Palace but I appreciate the bricks and unique elements to bump up the piece count. 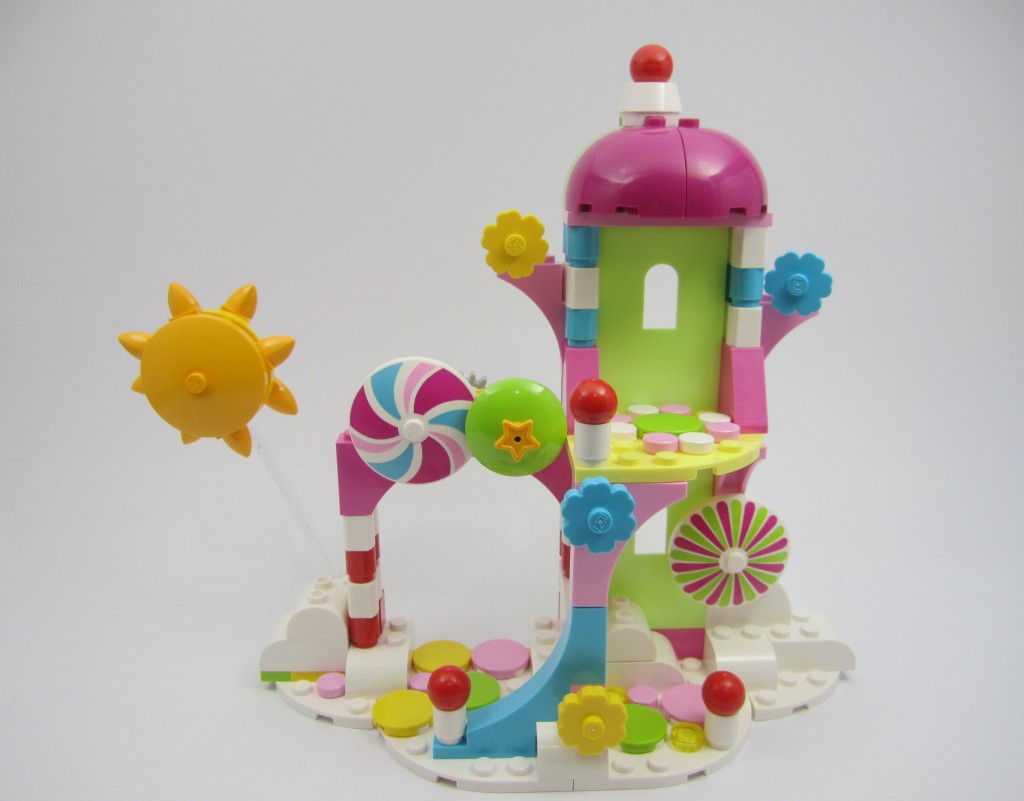 On to the main course, Cloud Cuckoo Palace itself and if I could describe the build in one word, it would be majestic. I’ve always been enamoured by vibrant and colourful LEGO sets, which Cloud Cuckoo Palace delivers in spades. I really love the use of pastel, Friends-inspired colour tones in such a chaotic yet pleasing fashion. LEGO really captured the look and feel of the multicoloured utopia that is Cloud Cuckoo Land with this build. 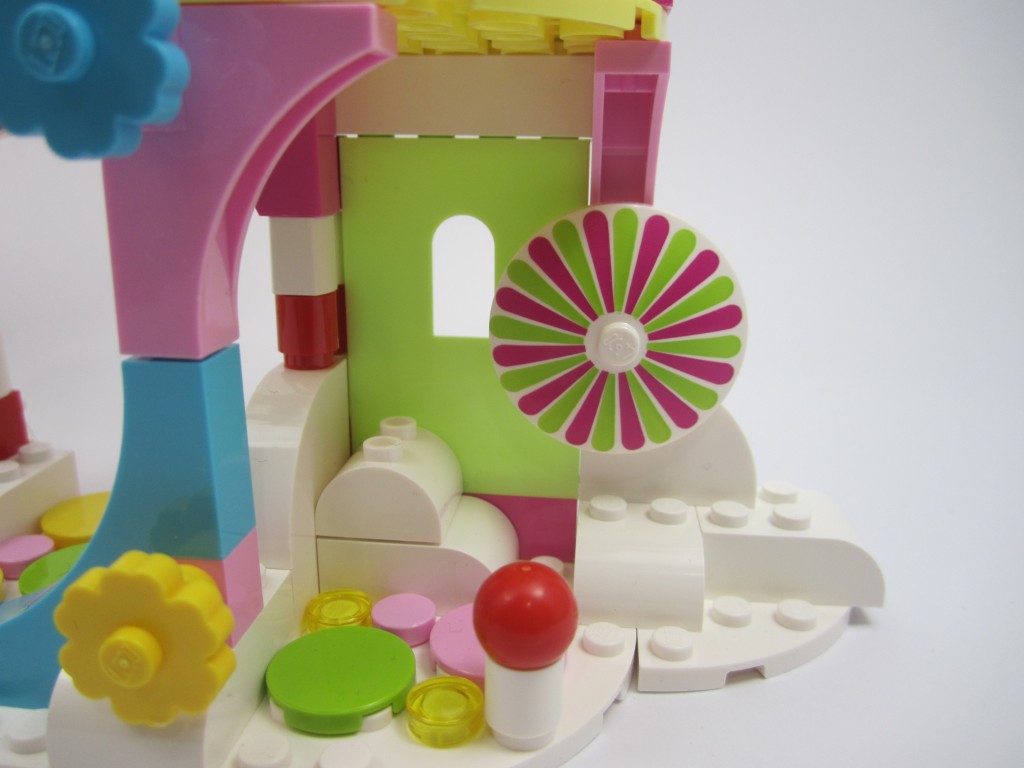 Zooming in really gives you a better view of all the intricate little details such as the colourful use of both 2×2 and 1×1 round titles for the flooring. To up the feminine levels, great elements like the round plates with printed designs as well as flower pieces make for fantastic visual flourishes that further help this set stand out from your typical LEGO builds 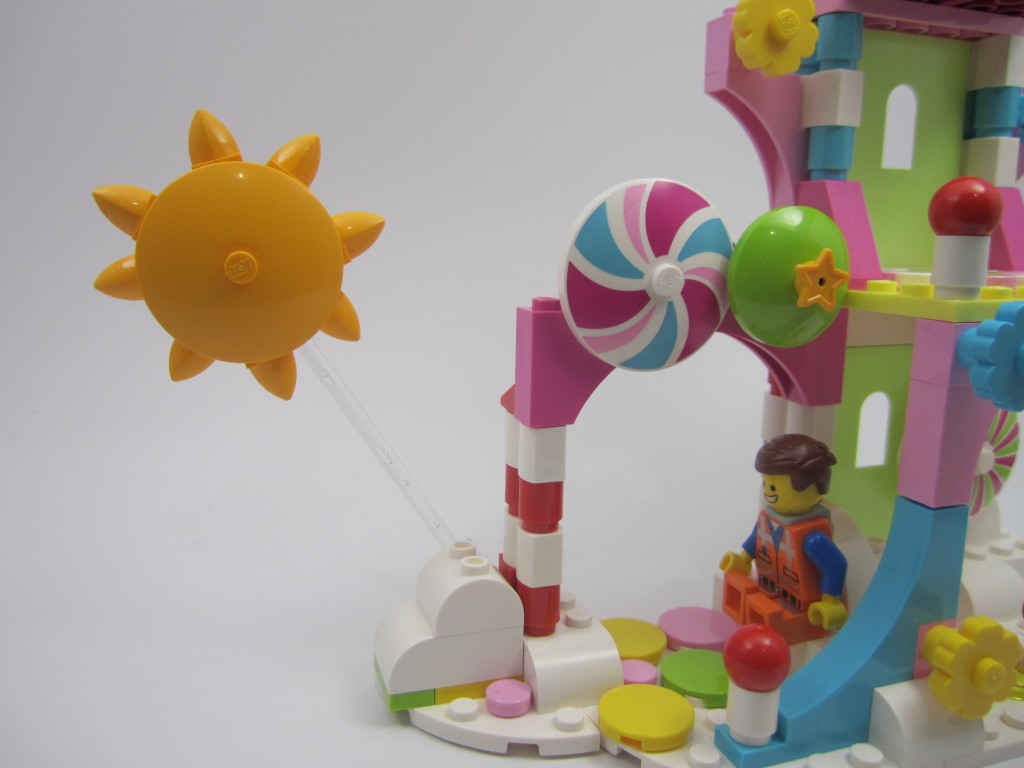 One of my favourite parts of this set is the sun, which is attached to a transparent rod of sorts and can be swiveled back and forth. It serves to balance out the entire set in tandem with giving Cloud Cuckoo Palace an even more vivid sunny flavour. The two rounded plates on the right can be twirled lazily thanks to a gear mechanism present behind the scenes. From an interactive point of view, it’s a fairly average play feature but one that works extremely well to give the entire set a dynamic, always-in-motion feel which you will recall from The LEGO Movie. 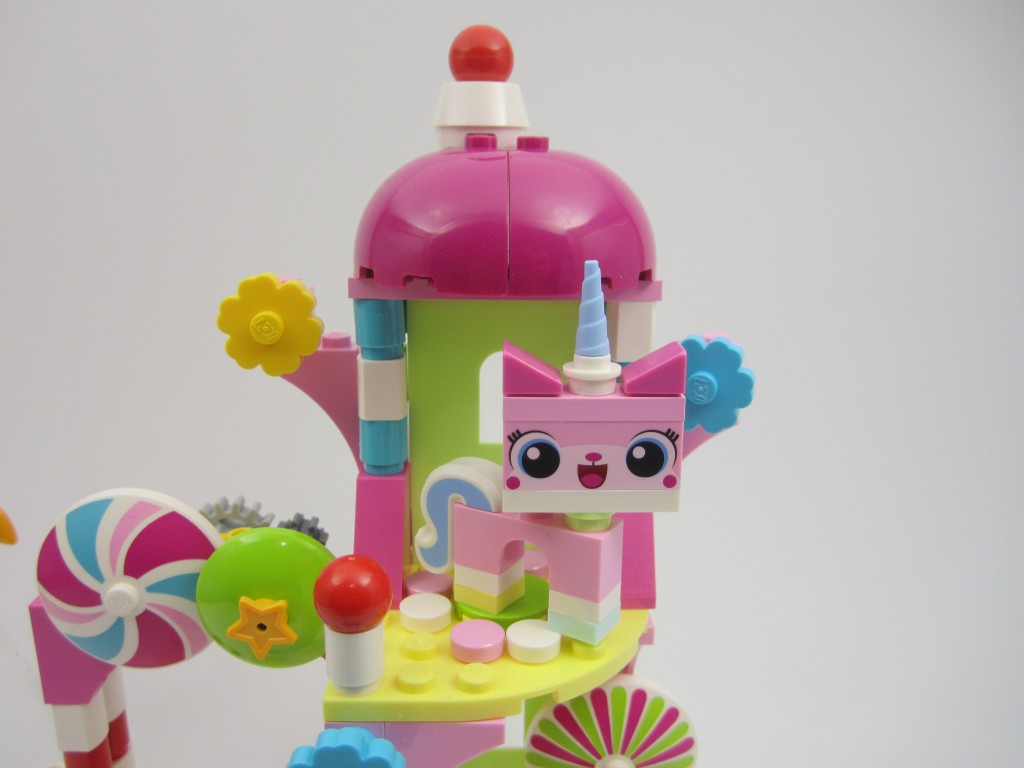 At the highest point of Cloud Cuckoo Palace is a comfortable little platform that Unikitty can occupy, presumably to rule and observe the going-ons in her fantasy kingdom of rainbows, sunshine and unicorns. Again, I really like the use of arches and the light green wall-piece – all the colours work extremely well together to bring the fun and gleeful atmosphere to life. 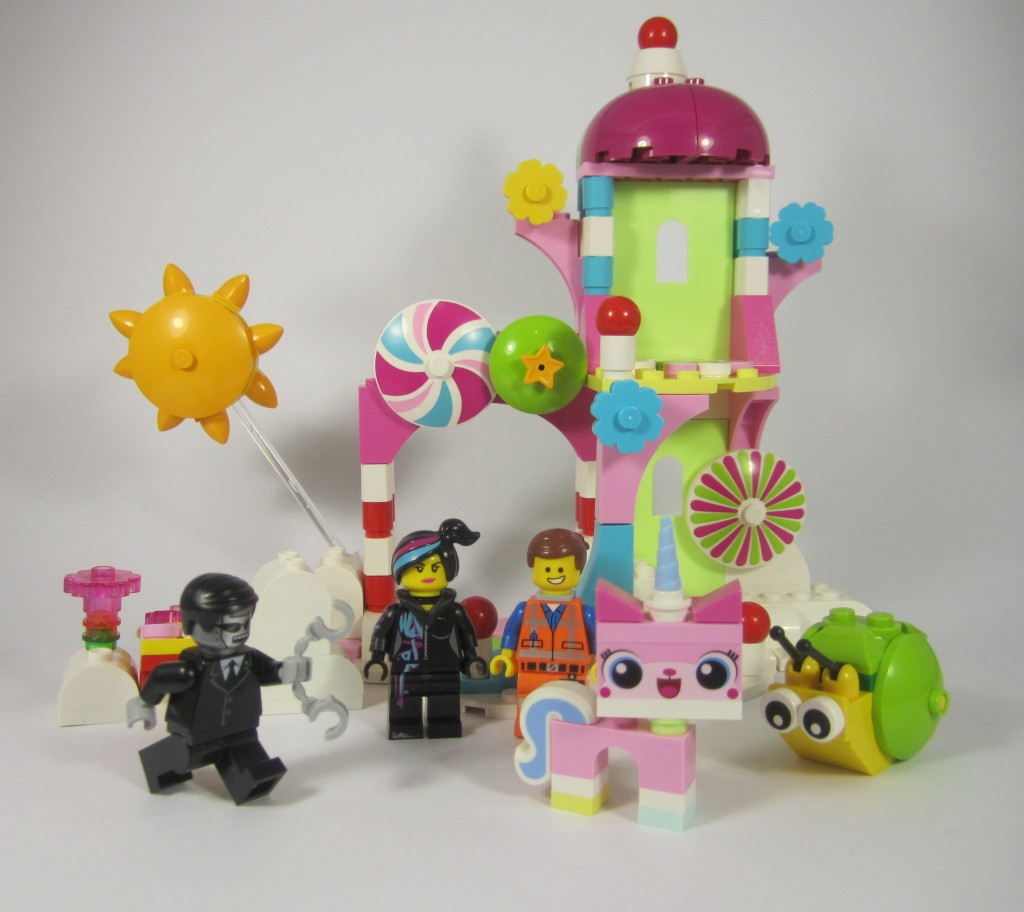 Final Thoughts: Cloud Cuckoo Palace stands out like a sore thumb from the rest of The LEGO Movie sets in the best of ways. No other recent set I can think of offers such a charming and eclectic mix of elements, colours and vibrancy which is sorely missing from LEGO sets these days that in my opinion, often try too hard to emulate reality.

Cloud Cuckoo Palace is a lovable ode to the creative magic that is conjured up when you leave an imaginative child with a pile of bricks in all shapes, sizes and colours. It is a wonderful set that will instantly make you reminisce about simpler times where any colour, or any piece would do when making things out of LEGO – which perfectly captures the essence of Cloud Cuckoo Land.

Value is extremely subjective when it comes to LEGO but Cloud Cuckoo Palace felt like a whole lot of LEGO for a very comfortable price point. A great selection of elements makes this set an awesome buy even if you’re just in it for the parts and in-demand minifigures like Unikitty.

Do you own Cloud Cuckoo Land? Let me know your thoughts on the set in the comments!