Welcome to my first review of 2019! I decided to ease in to 2019 with one of the smallest sets this year, but don’t let its size fool you, it’s already a very strong contender for Set of the Year.

It’s one of the most anticipated sets so far, so without further ado, let’s jump into a short review of 70481 Benny’s Space Squad – featuring Lenny, the new Pink Classic Space minifigure! 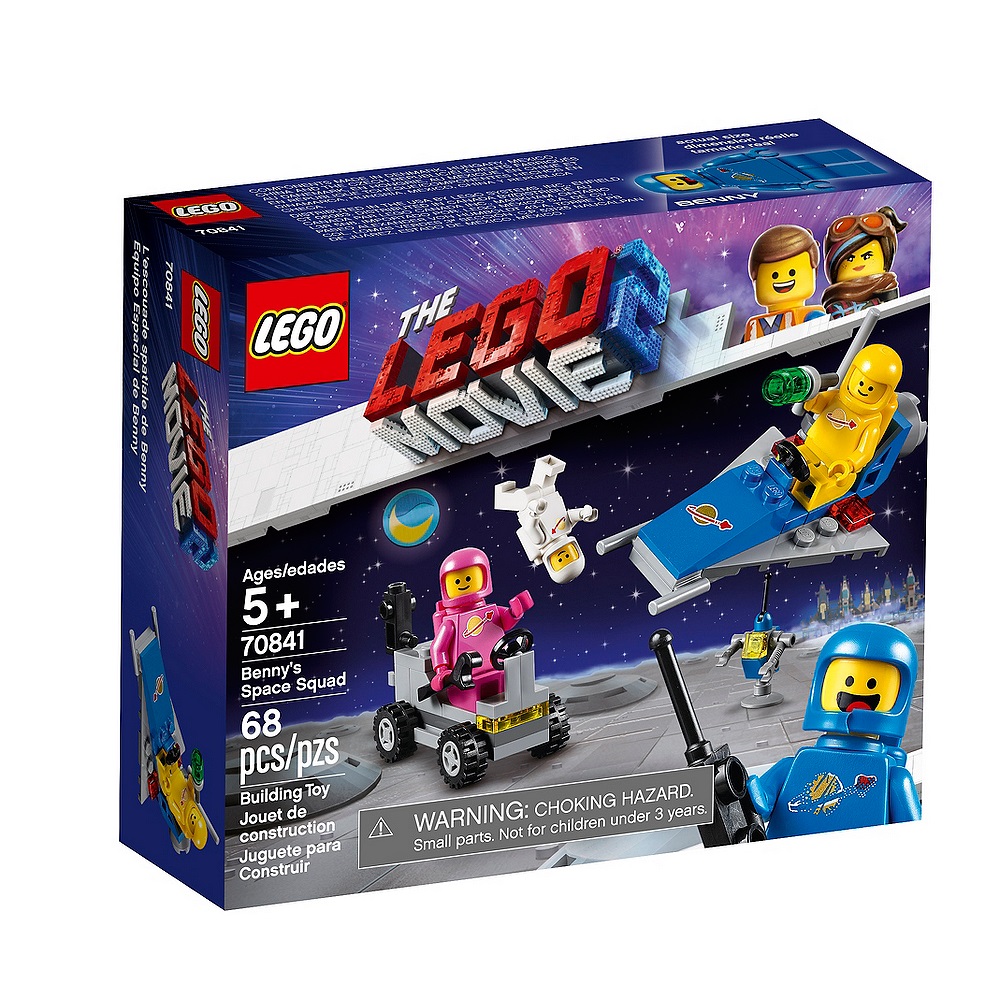 It took a couple of years, but LEGO finally cracked the secret to printing money – start selling what is essentially a Classic Space battle pack.

When the LEGO Movie 2 sets were revealed, Benny’s Space Squad stood out for reasons that drive any seasoned LEGO fan into a frenzy, the re-release of two classic Space Minifigures AND perhaps the biggest surprise of all, the introduction of a new Pink Classic Space minifigure into the LEGO canon. 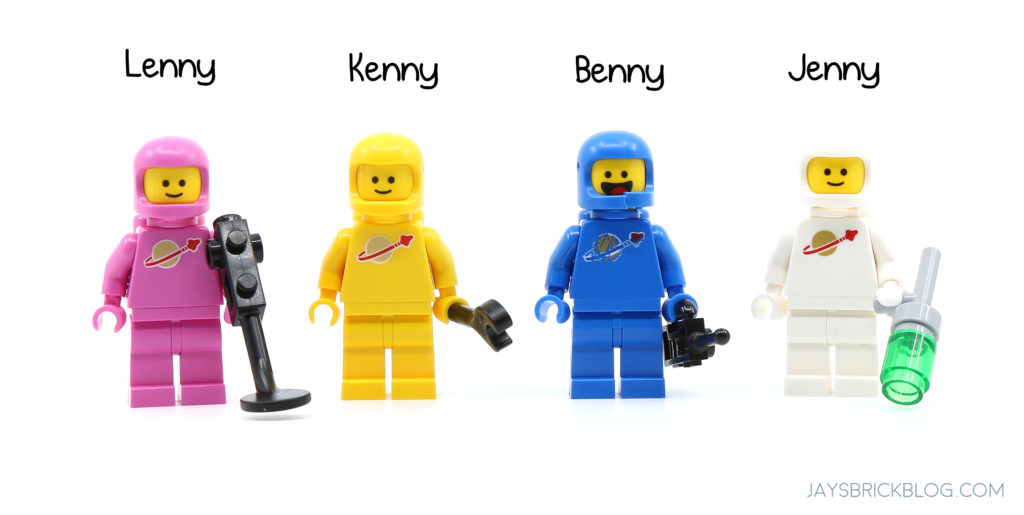 The Pink Classic Space Minifigure has been christened Lenny and joins Kenny, Benny (who we all know and love) and Jenny to form Benny’s Space Squad.

Like many LEGO fans, this set caught me quite off guard, especially the inclusion of Lenny, the pink Classic Space minifigure.

Classic Space is one, if not, the most beloved LEGO themes and is universally revered by fans old and new.

They’re very protective of the ‘theme’ and only rarely bring it back out for remixes/re-releases.

That said, I did sort of predict that LEGO would re-release Classic Space this year (see screenshot from a group chat with my mates in November 2018) and I have a feeling that this won’t be the last we see of Classic Space in 2019.

Note: Yes, I know these sets were technically released in late December 2018, but they’re still considered a 2019 set.

As this set pretty much revolves around these 4 minifigures, I’m going to flip things around slightly, and check out the builds before doing a deep-ish dive into the minifigures. 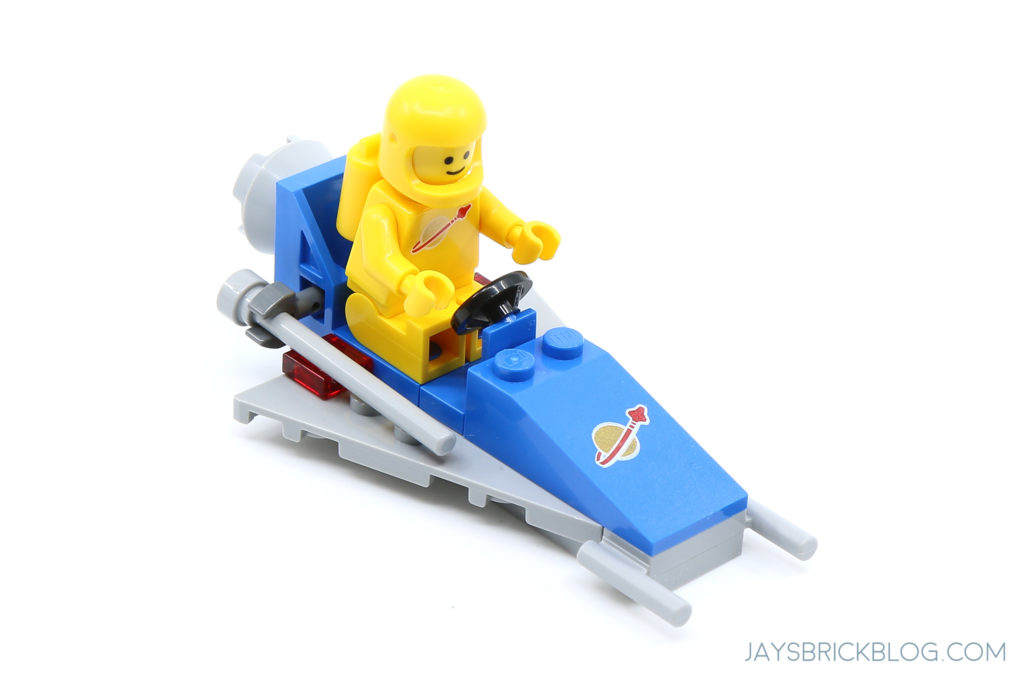 The set comes with a small spaceship, which is a great homage to the forms and aesthetics of Spaceships from the Classic Space Era with its triangular shape.

It seamlessly blends blue with grey in the timeless style of Classic Space. You can tell that the designers absolutely paid attention to all the little details such as bringing back the Space Seat which evokes so much nostalgia. 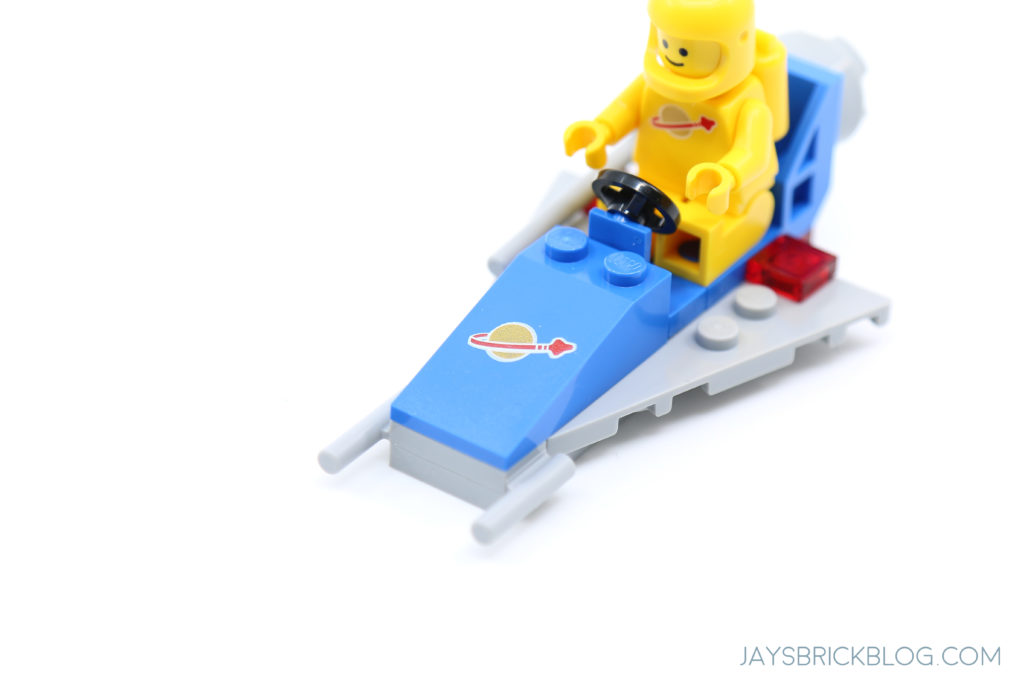 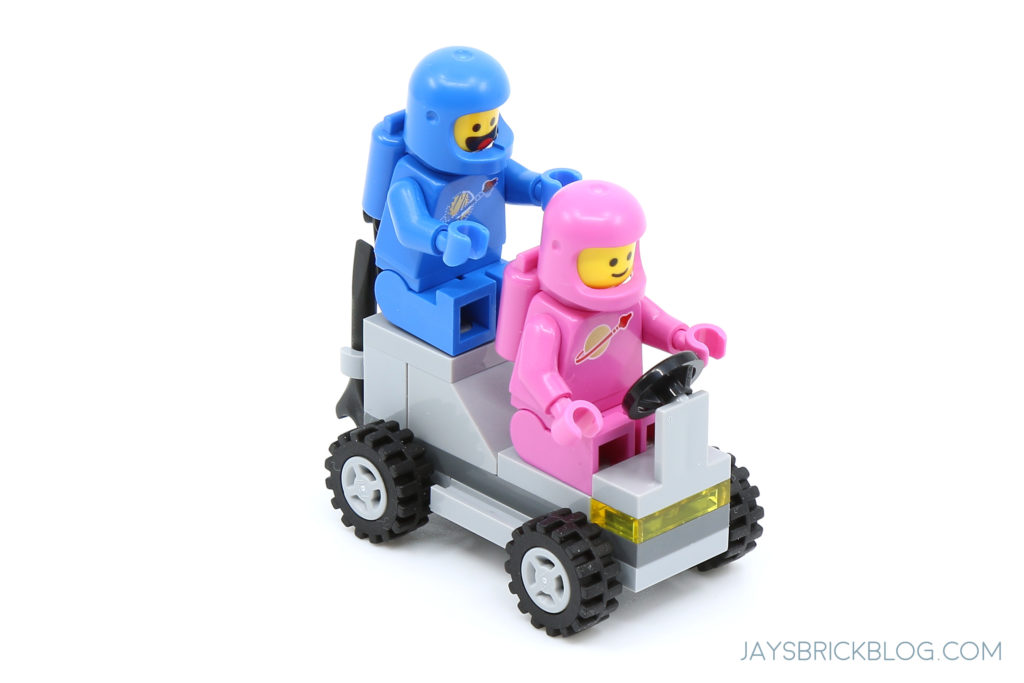 The second build is another familiar sight for fans of Classic Space – a simple two-seater Lunar Buggy.

Like the mini-spaceship, it’s another common fixture in Classic Space sets, which did most of their exploring on alien crater-filled planetscapes, which often required a hardy buggy to traverse the rocky terrain. 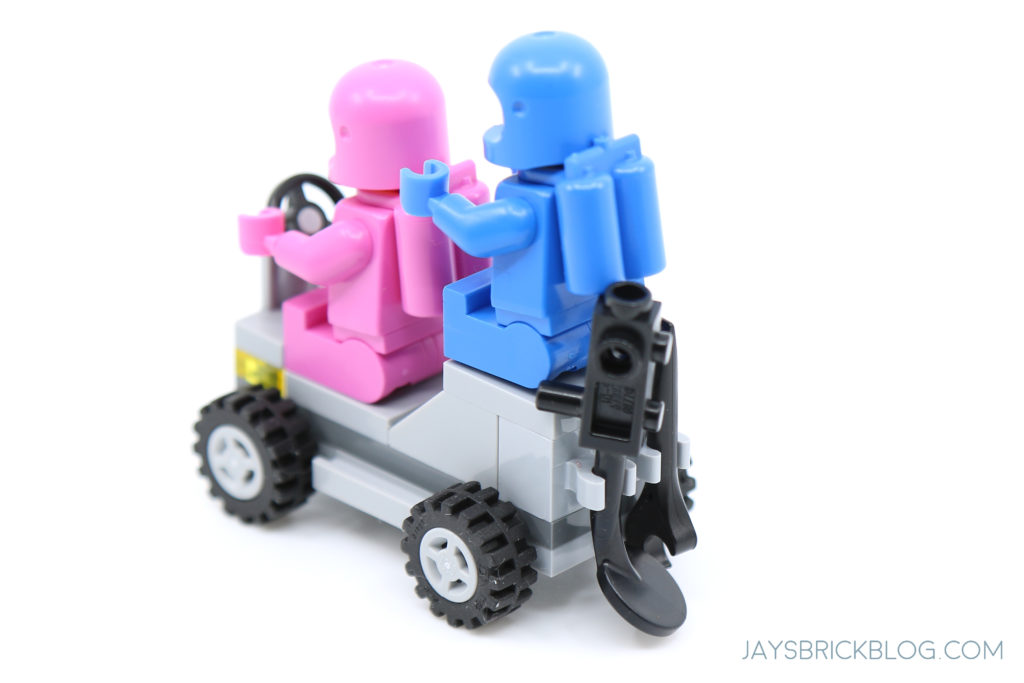 The buggy is super simple, and it has two clips at the back to hold tools such as the metal detector and wrench. 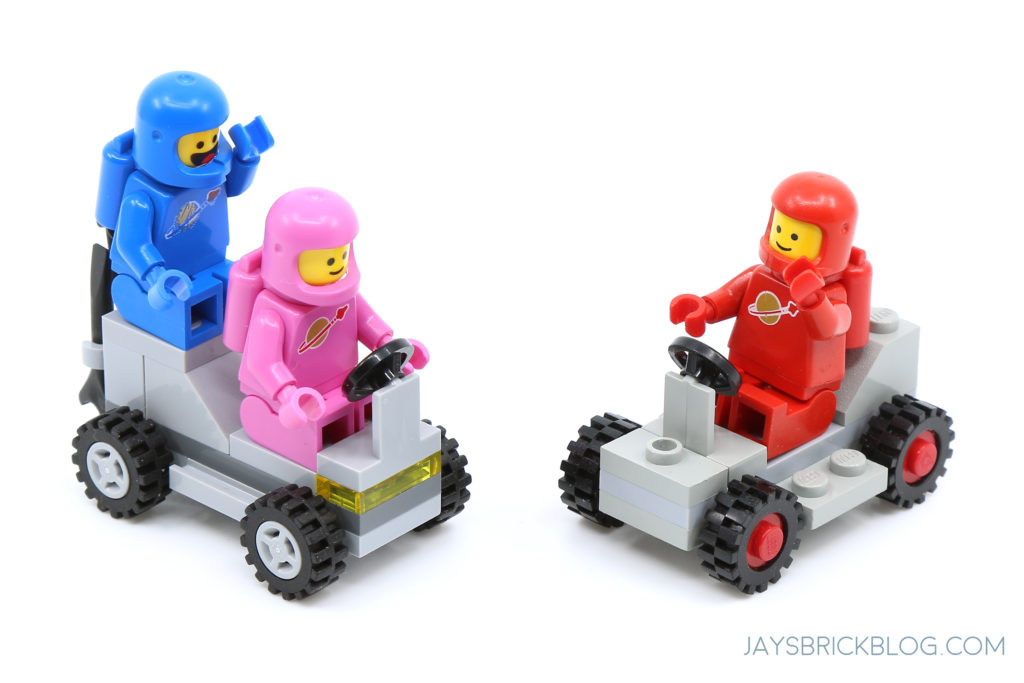 Here’s a comparison with the Lunar Buggy from 928 Galaxy Explorer (one of my favourite sets of all time). I wish they had managed to incorporate the red wheels, but it’s a close enough homage. 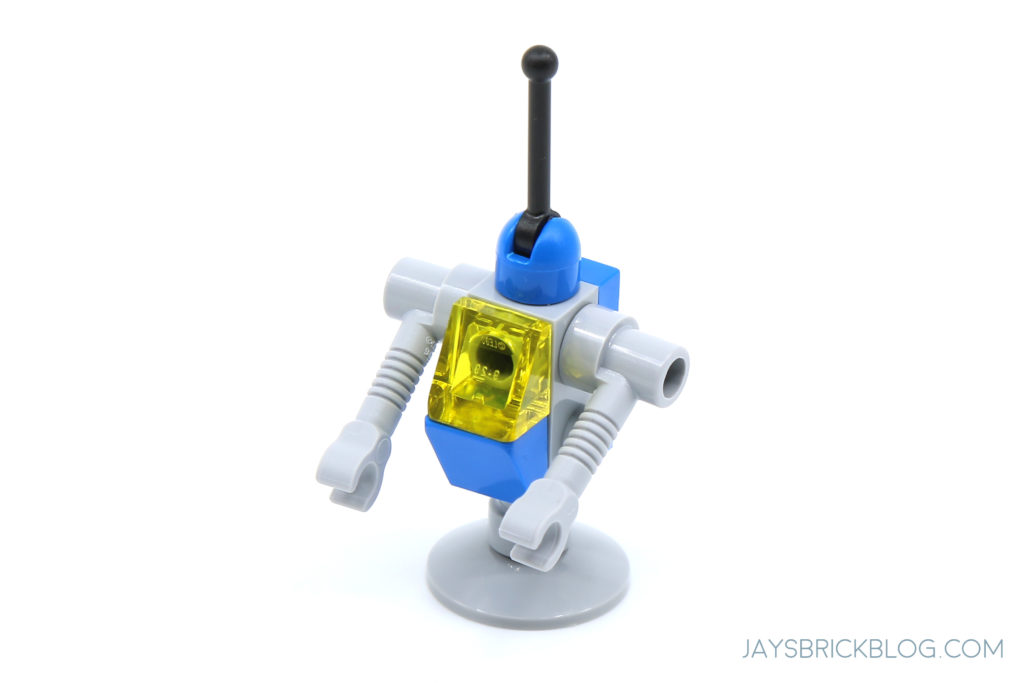 Lastly, Classic Space was also filled with all sorts of Robots, and you piece together a small but charming little Spacebot. I really love the use of the trans-yellow cheese slope on its body. 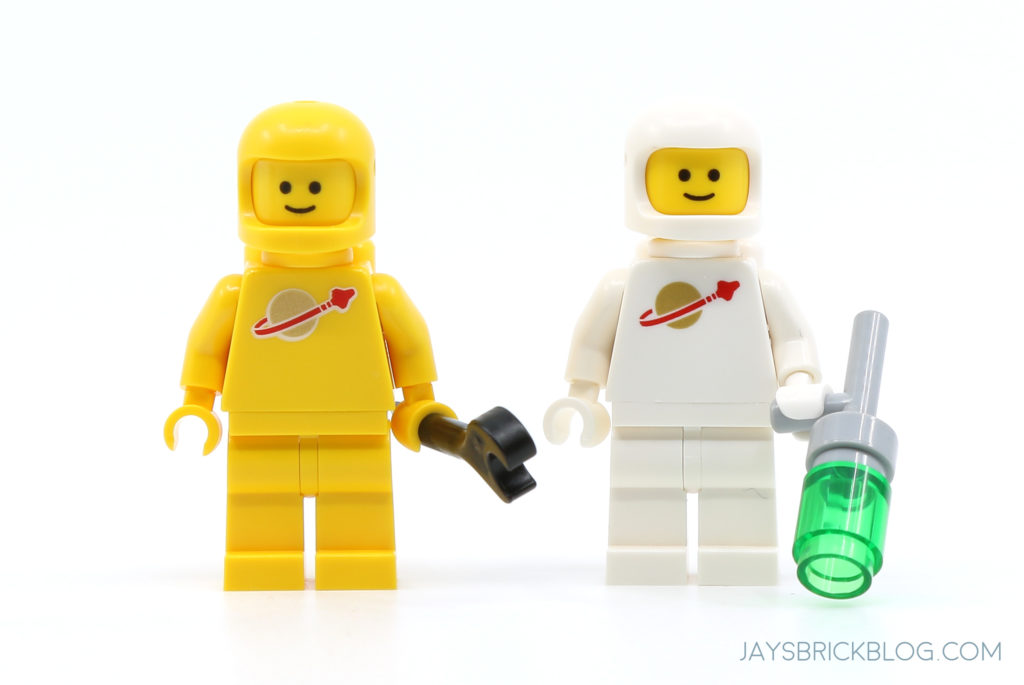 Here’s a look at the Yellow and White Classic Space Minifigures, named Kenny and Jenny respectively.

They’re both near-identical to the OG Yellow and White Classic Space minifigures, even down to the old-style helmets.

Of course, being new minifigures, their golden moons on the torsos are in pristine condition, which is the main reason why Classic Fans are so excited about this set – the prospect of brand new, original-style Classic Space torsos, oxygen tanks and even old-style helmets. 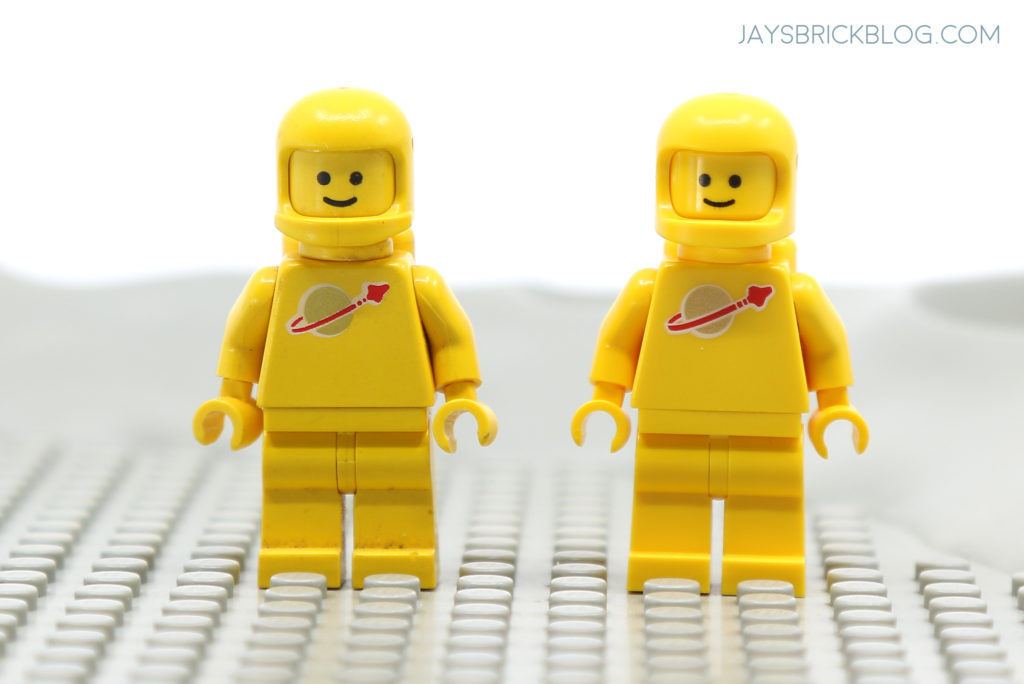 Here’s a comparison between an actual Classic Space Yellow space minifigure from my personal collection who is on the left, and Kenny who is on the right.

As you can see, it’s such a good re-issued minifigure that you can’t essentially tell them apart. 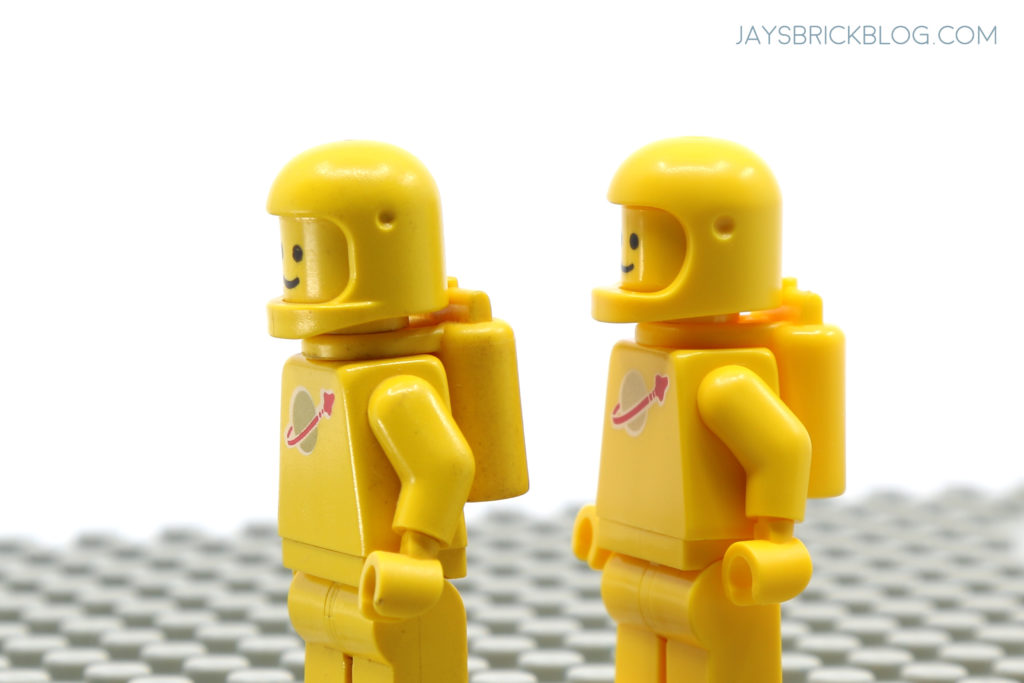 That said, there is one major difference – the helmet moulds. To my memory, there were two different types of old-style helmets – you can see one variation on the left, which has a bit of a botch on the bottom chin, and the other which is more smooth.

Other than that, they’re almost 1:1 versions of beloved Classic Space minifigures. 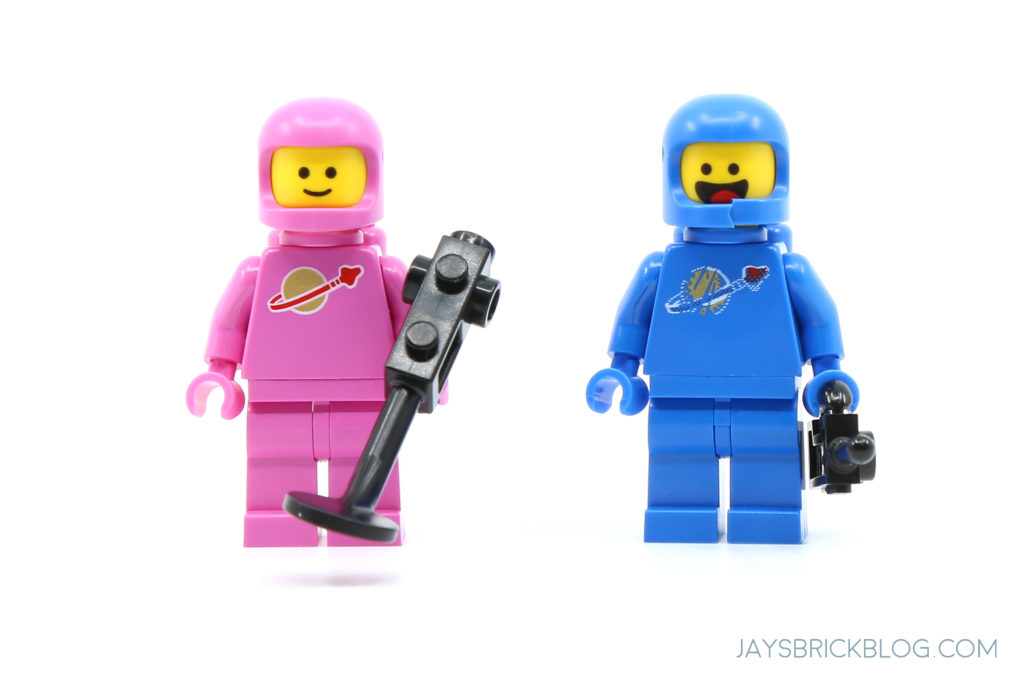 Here we have Lenny, the brand new Pink Classic Space minifigure, and Benny, the Spaceship-crazed astronaut who debuted in the first LEGO Movie who is best known for this iconic scene.

Benny comes with a walkie talkie, and his design hasn’t really changed much from the LEGO Movie 1 version.

In many of the new LEGO Movie 2 sets, Benny is sporting some sort of robotic arm, but he looks pretty intact in this version. 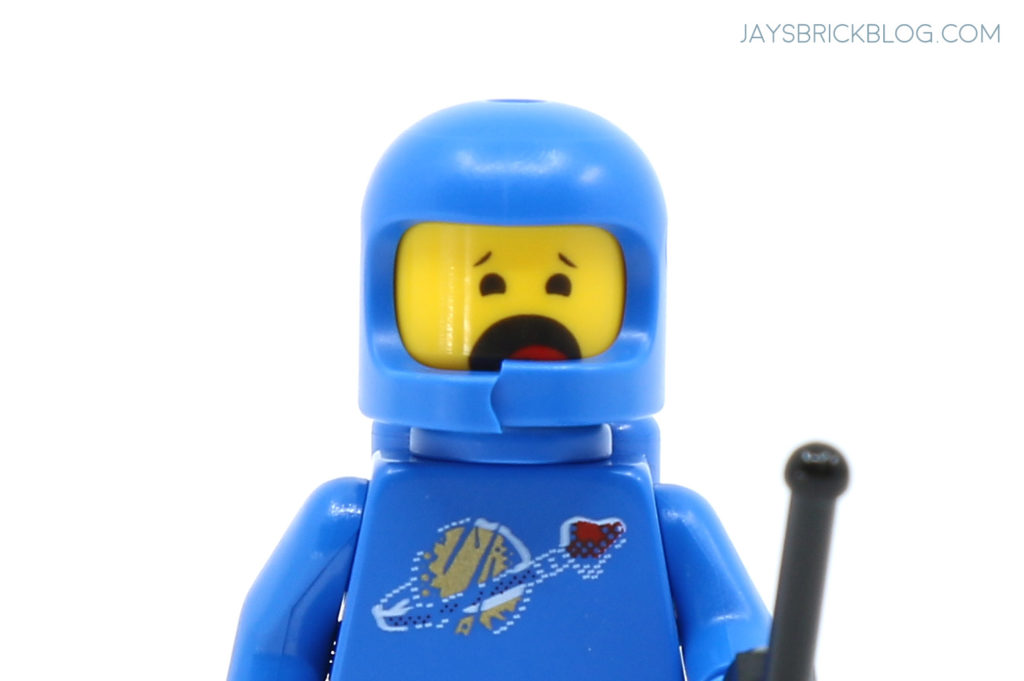 Obviously, as Classic Space minifigures all only had the default OG smiley face.

Benny’s design, features a cracked helmet, and a faded and scuffed Classic Space logo on his torso.

If you’re new to LEGO, this is a nod to the fact that chins of Classic Space LEGO minifigures often snapped due to a design flaw (and mostly heavy play) and for a lot of fans, their minifigures often had the gold on their torsos wear away, get scratched or have it turn white from age/play. 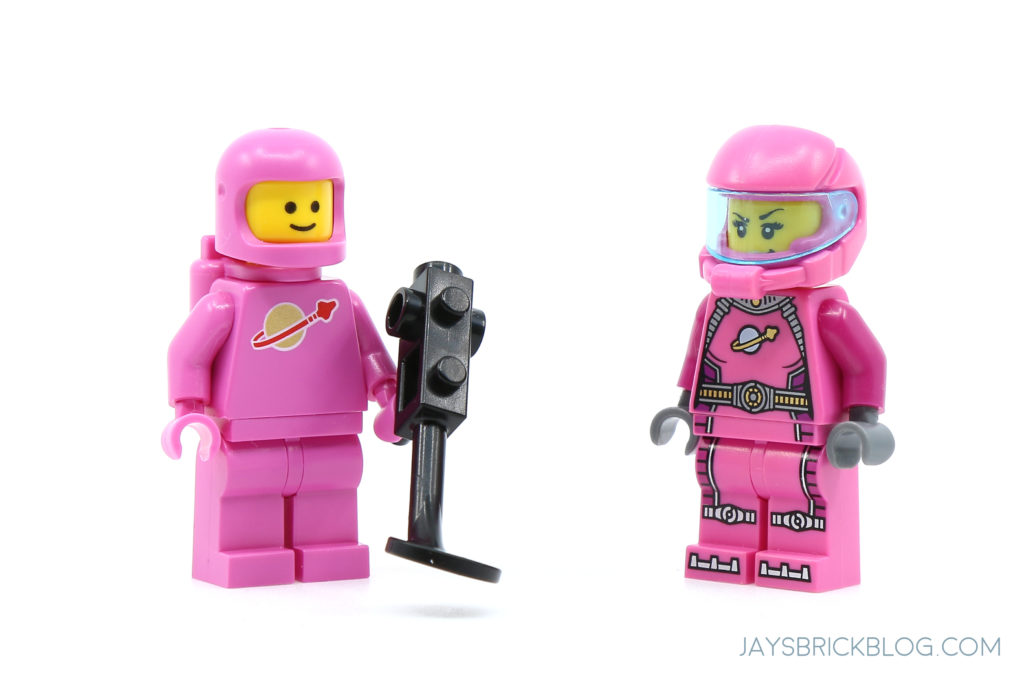 Of course, the main draw of this set is Lenny, the Pink Classic Space minifigure.

You can debate where he’s the first Pink Space minifigure (that claimis owned by the Intergalactic Girl from Series 6 who also sports a small Classic Space logo on her torso). I reckon they’d make a good colour

According to Matthew Aston, one of the producers for the movie, Lenny’s design drew inspiration from Kylie Minogue, specifically her pink space suit from the Put Yourself In My Place music video. His name Lenny is also a nod to “Charlene Robinson“, the character she played in the Aussie soap opera, Neighbours.

So there you have it, 2 old favourites, Benny and a brand new entrant into Classic Space, making this quite the momentous set.

The introduction of Lenny now brings us to a total of 8 official LEGO Classic Space minifigure colours. Technically 7 as the Grey isn’t official per se – I just repurposed Series 17’s Rocket Boy’s torso to create a grey version, but it’s official in my eyes.

Seeing all of them come together is like a rainbow of nostalgia.

I arranged them from oldest to newest – red and white debuted at about the same time, followed by yellow, black and blue. These were from the original Classic Space era.

The Green Classic Space minifigure was introduced with 2014’s Exo Suit, Rocket Boy was from 2017 and now in 2019 we have a brand new Pink entrant. 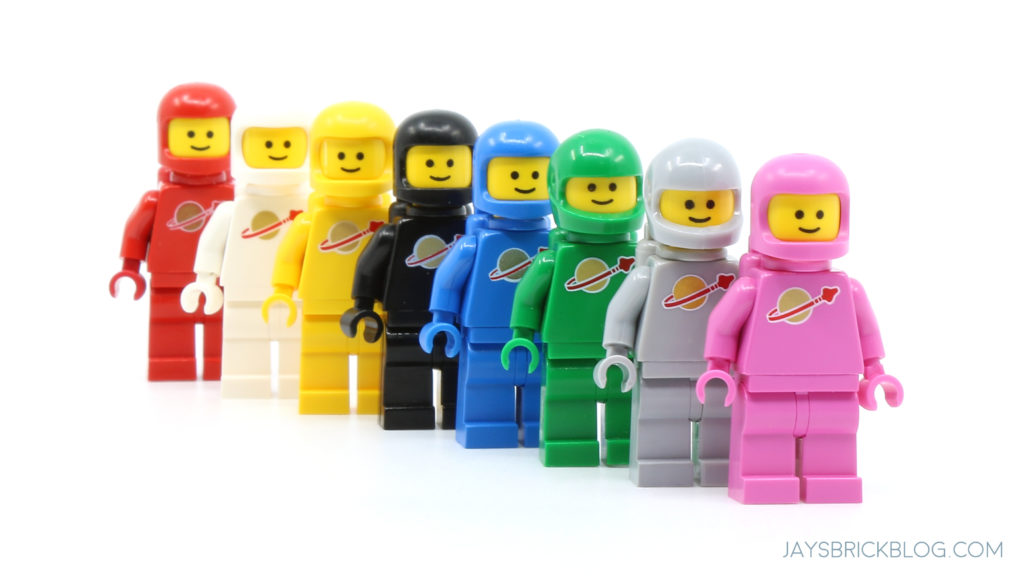 For those that are unaware, each Classic Space minifigure colour denotes a specific role that each Spaceman specialises in:

I hope we learn from the movie what role Pink Classic Space minifigs play – I hope it’s something cool. Maybe Engineering? 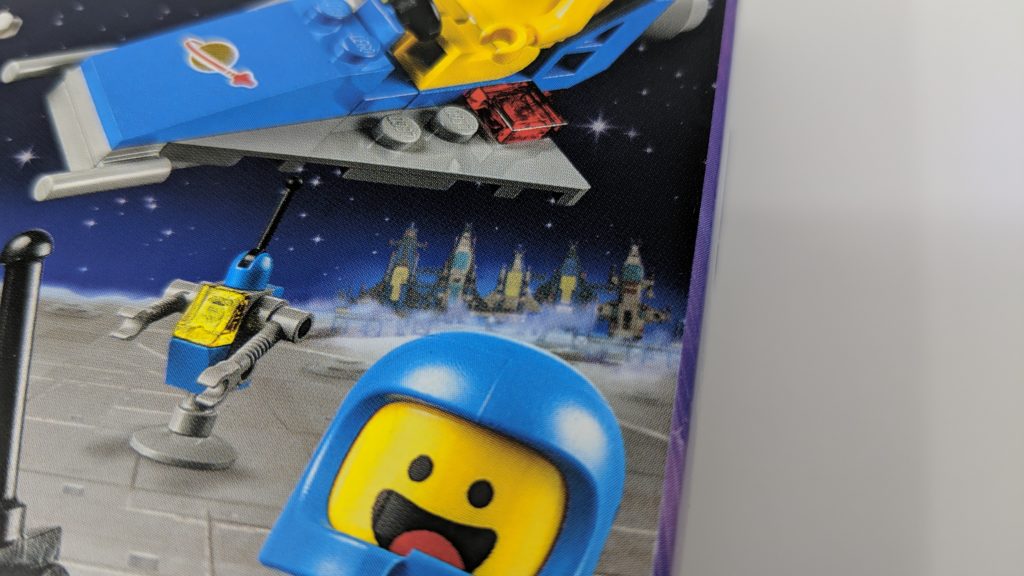 To close of this review, did anyone notice this on the box? LEGO have been hiding teasers in plain sight on the box art of recent sets (Roller Coaster, UCS Millennium Falcon etc) and this collection of Classic Spaceships in the background of Benny’s Space Squad box art sure seems out of place.

There are 5 spaceships in total, perhaps one for each Classic Space minifigure plus an extra? Maybe for a Red or Black Spaceman/woman?

I’m quite confident that is a teaser for an unannounced Classic Space-themed LEGO Movie 2 set.

It would also make sense to have a successor to Benny’s Spaceship, Spaceship SPACESHIP which was one of THE standout sets of the 1st LEGO Movie. 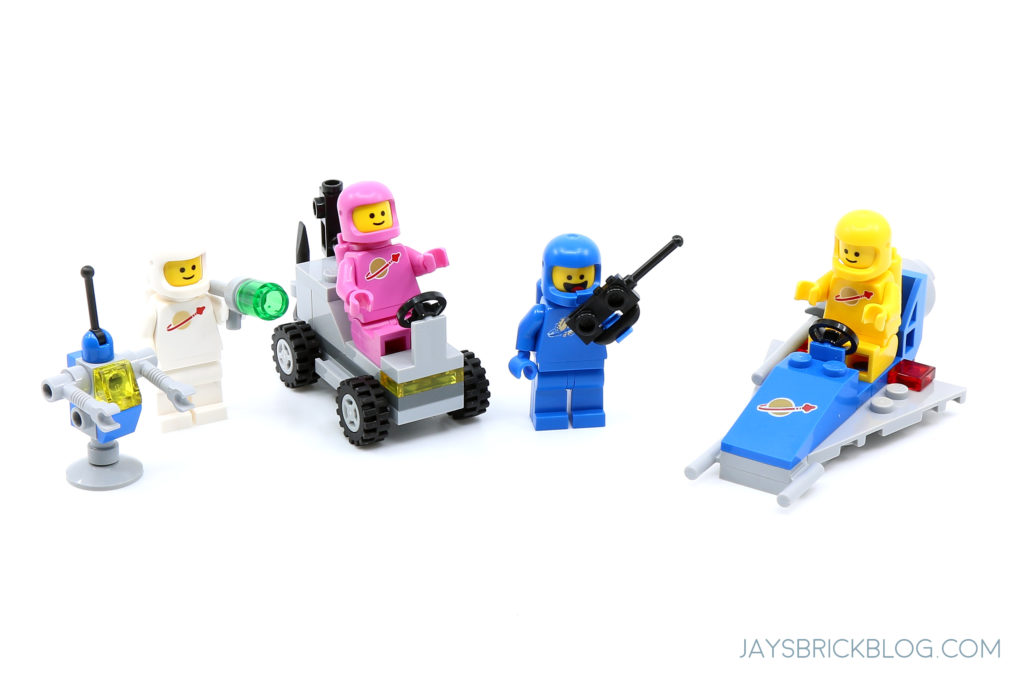 Final thoughts: If I could distill this review into one sentence, it would be “This is a freakin’ Classic Space Battle Pack” and I think I’d have done a decent job in convincing you to part with a tiny chunk of your disposable income on this outstanding set.

70841 Benny’s Space Squad is designed very much using the same design philosophy as The LEGO Movie 1’s Double-Decker Couch: Give the fans what they want in the most inexpensive set of the theme. 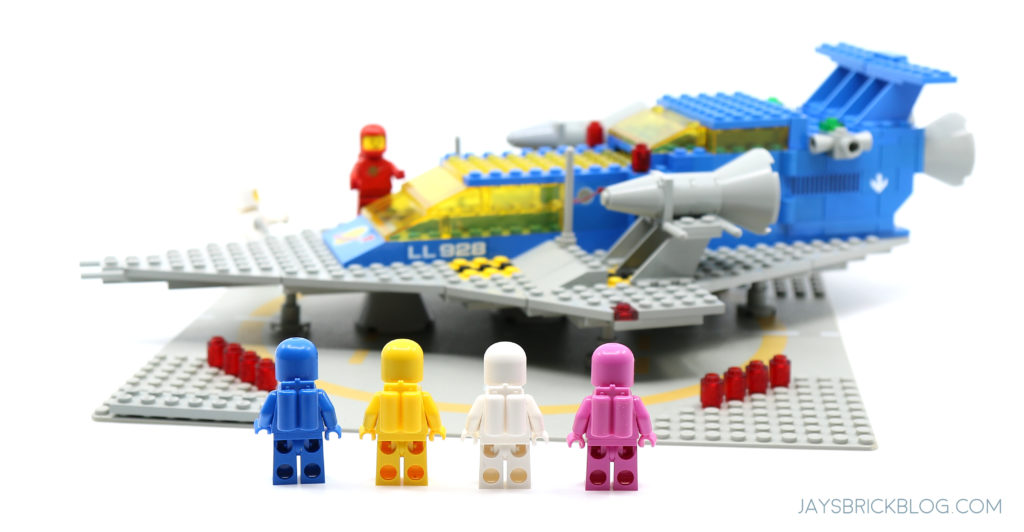 And like the Double Decker Couch, LEGO have absolutely nailed this set. It’s a beautiful love letter to Classic Space aficionados, proclaiming that “no, we haven’t forgotten about you”.

The inclusion of Lenny, the new Pink Classic Spaceman is another master-stroke as it effectively expands the Classic Space universe in the same way that the Exo Suit did.

There’s just so much to love, and I am really thankful that LEGO decided to bring back Classic Space in such thoughtful fashion. 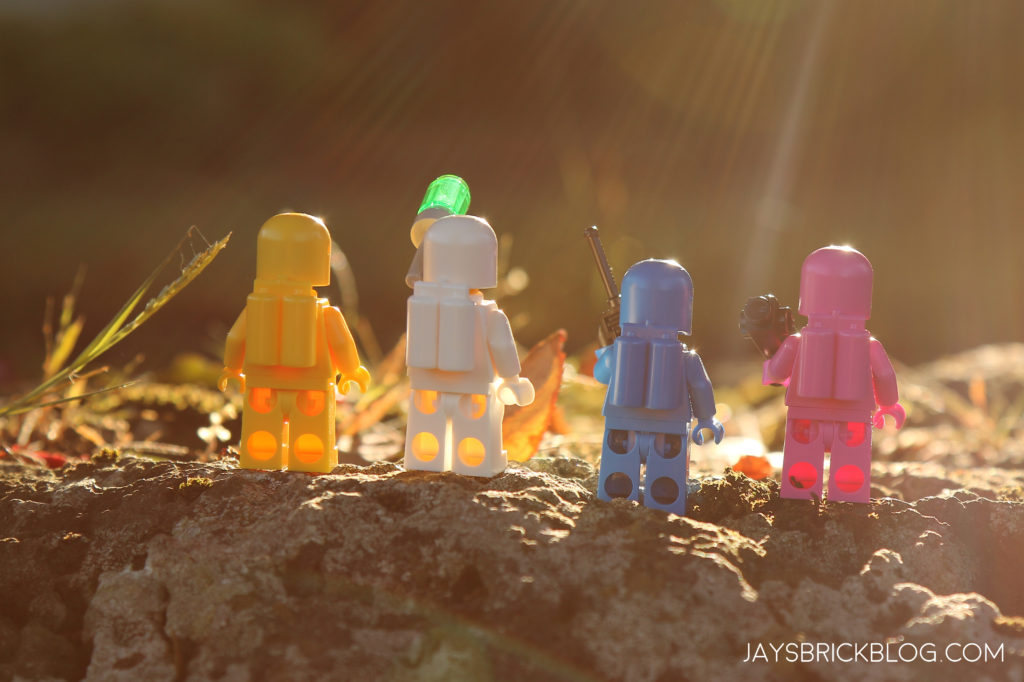 I cannot speak highly enough about this set – it nails it from every conceivable aspect and is a brilliant, brilliant homage to Classic Space.

It’s undoubtedly going to be one of the most popular sets this year, and I suspect that shops will have a difficult time keeping enough of them in stock, judging by the universal demand from LEGO fans.

70841 is everything you could ever want from a Classic Space set, outside of a 1:1 reissue of 928 Galaxy Explorer.

It’s an instant classic and easily qualifies as a 5/5 perfect set in my books. 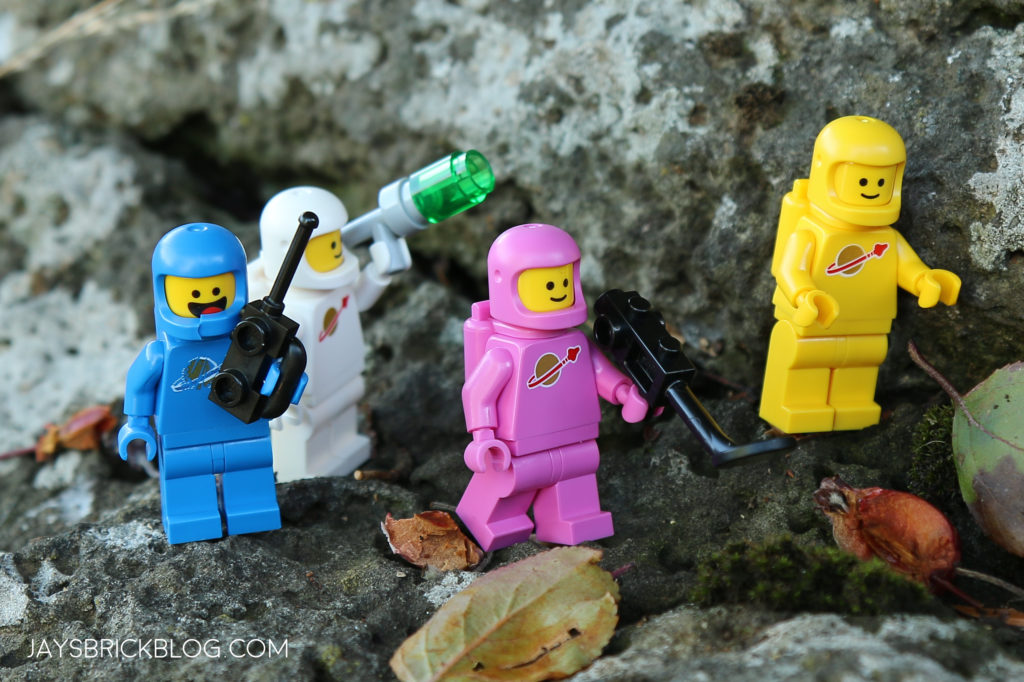 Thanks for reading the review! I hope you enjoyed all the photos I took of Benny’s Space Squad, and it’s always a good thing to incorporate my 928 Galaxy Explorer into shoots.

70841 Benny’s Space Squad is out in most countries except for Australia, which will get these at retail in March 2019. It’s also available from LEGO.com (currently on backorder) or Amazon.

Have you been lucky to get your hands on Benny’s Space Squad? Do you think the teaser on the box is legit? Let me know what you think in the comments section!

Don’t forget, you can find many more reviews in the Jay’s Brick Blog Review Hub. To stay up to date on the latest posts, you can follow the Jay’s Brick Blog Facebook page or subscribe to receive email alerts for new posts! I also post behind the scenes content, and teasers on my Instagram page @jayong28, so give me a follow if you’d like to see more!

« Introducing LEGO 70840 Welcome to Apocalypseburg – the largest LEGO Movie 2 set (for now!)
Have you got tickets to Brickvention yet? » 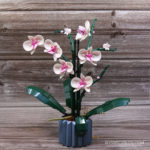