After reviewing and enjoying the Kylo Ren buildable figure, I knew I wanted more from the new Star Wars “Constraction” theme. I received 75116 Finn from Warlord LEGO, a Russian LEGO Youtuber who had gotten the new wave of Star Wars sets super early and he was gracious enough to send me an early copy of Finn and Captain Phasma for me to review.

Let’s take a closer look at the Finn buildable figure! 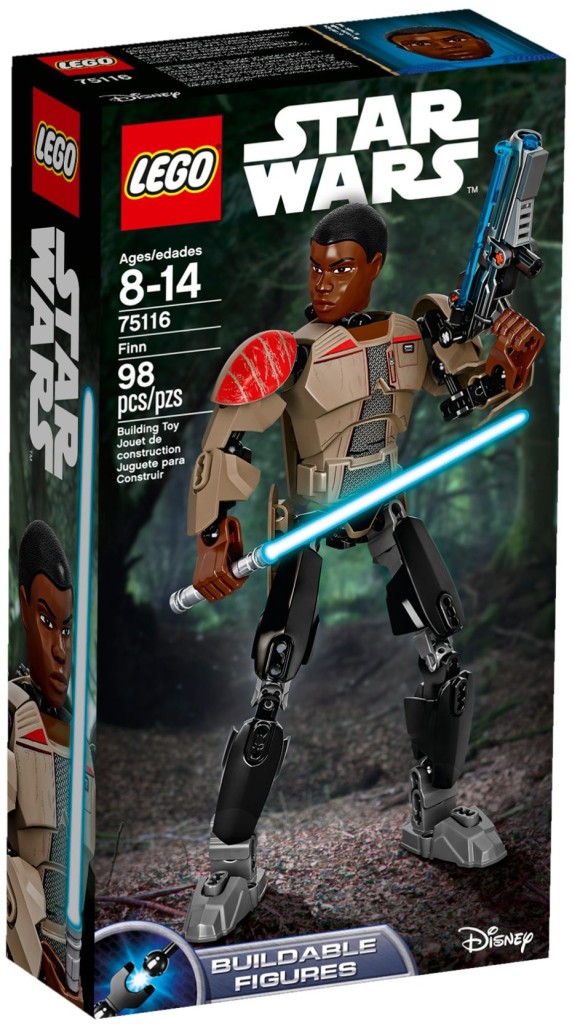 I’ll be honest, I didn’t enjoy Finn as much as I did Kylo Ren. Building Finn was yet another easy build – once you’ve built one Constraction figure, you’ve pretty much built them all.

There’s nothing particularly ground breaking about the build process for these humanoid figures, just plenty of snapping together Bionicle-type parts and limbs using ball joints. There are a few slight variations with each figure but it’s nothing particularly noteworthy. Expect to build Finn in about 10 – 15 minutes. 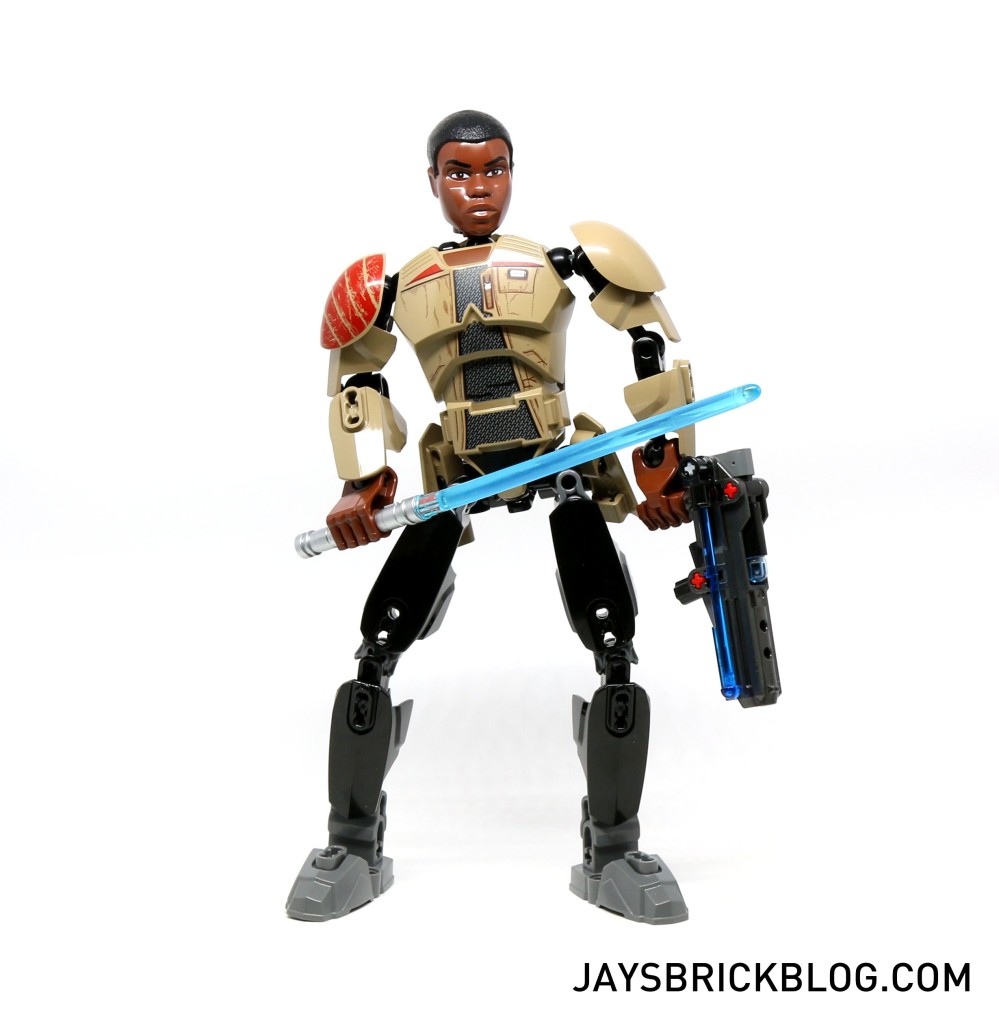 Here’s the finished build! My first impression of Finn was that he looked a little odd, unnatural and a bit too robotic.

Finn is packing a lot of heat, wielding a lightsaber in one hand and a blaster rifle in another. He’s ditched his Stormtrooper threads for a very stylish tan coloured leather jacket that was gifted to him by a special friend. 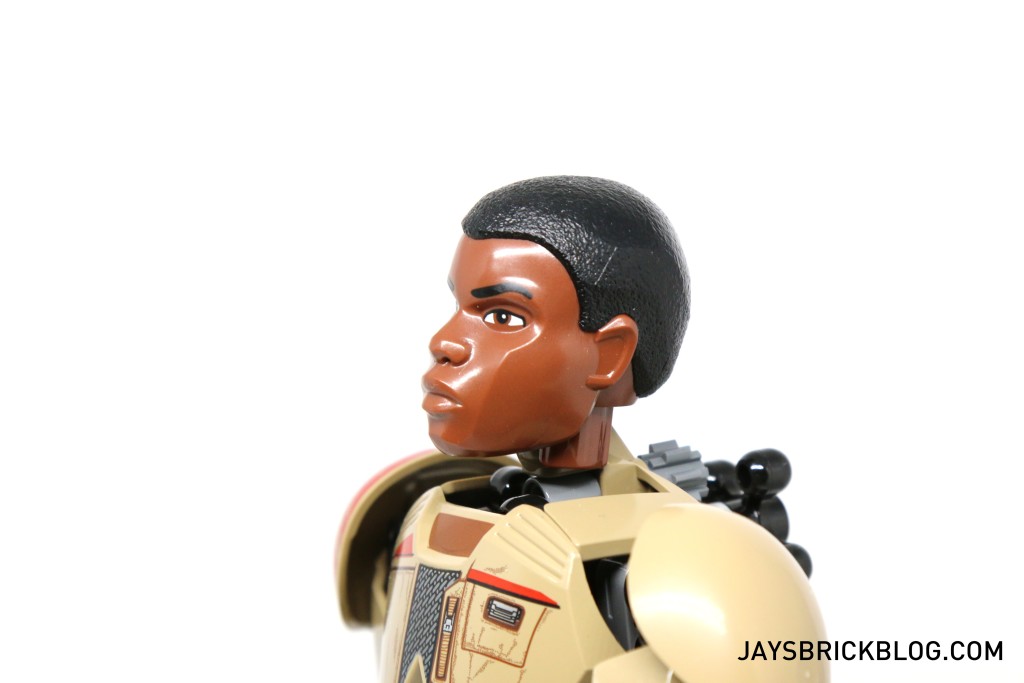 Here’s a look at Finn’s face. It’s quite a realistic rendition of John Boyega’s face. It really captures his facial features well, especially from the side. To me, the shiny plastic material used for his face gives him a very cartoonish vibe, although I really like what they’ve done with the texture of his hair. 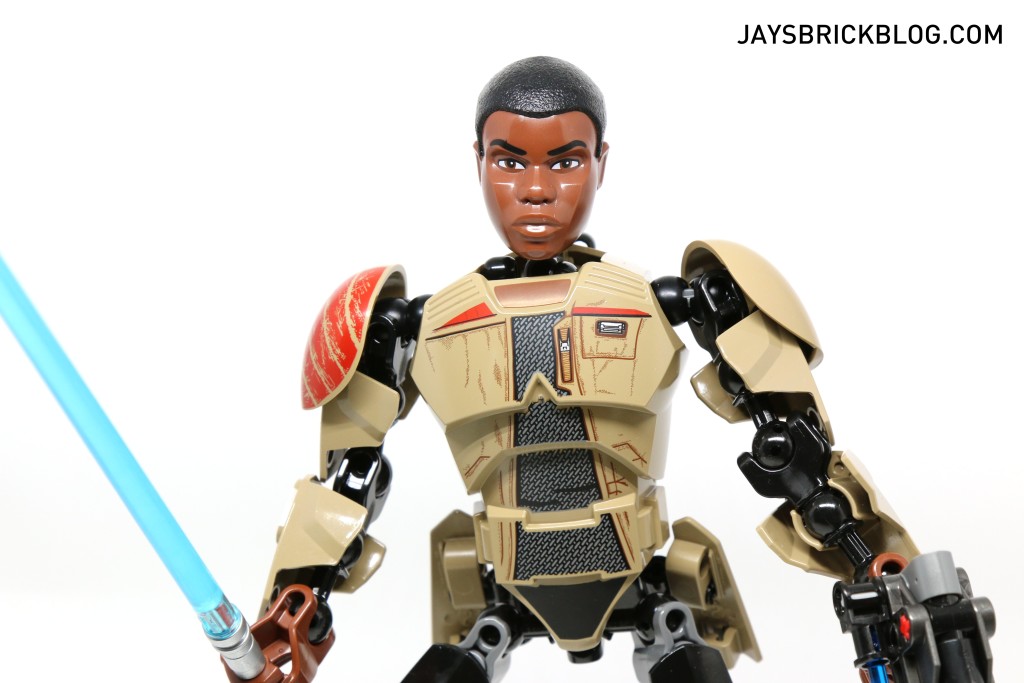 Here’s a better look at Finn from the front, where you can also see the details on his torso. The printing is sharp, although I’m not a fan of the “armoured” exoskeleton look and the segmented sections. It’s the exact same torso piece used in Kylo Ren just with a fresh coat of paint.

The printed details are exceptionally sharp – stare at his chest long enough and you’ll be able to see the leather jacket overlayed his grey mesh top. While the printing might be great, the segmented chunks draw too much attention from your eye and that’s all you’ll mostly end up fixating upon.

Also, there’s a really strange patch of brown near his neck that’s meant to be his exposed lower neckline – no idea why they didn’t make it tan like everything else. 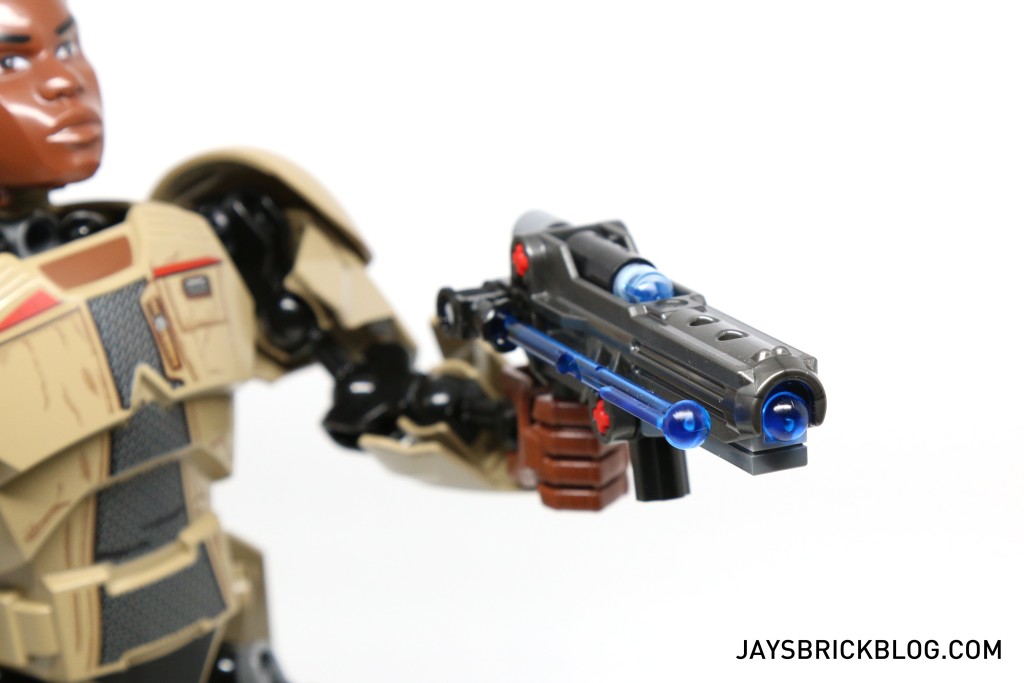 Here’s a look at Finn’s blaster, which utilizes a spring loaded shooter. Squeeze the black trigger beneath the blaster to fire the blue beam across the room with astonishing force. 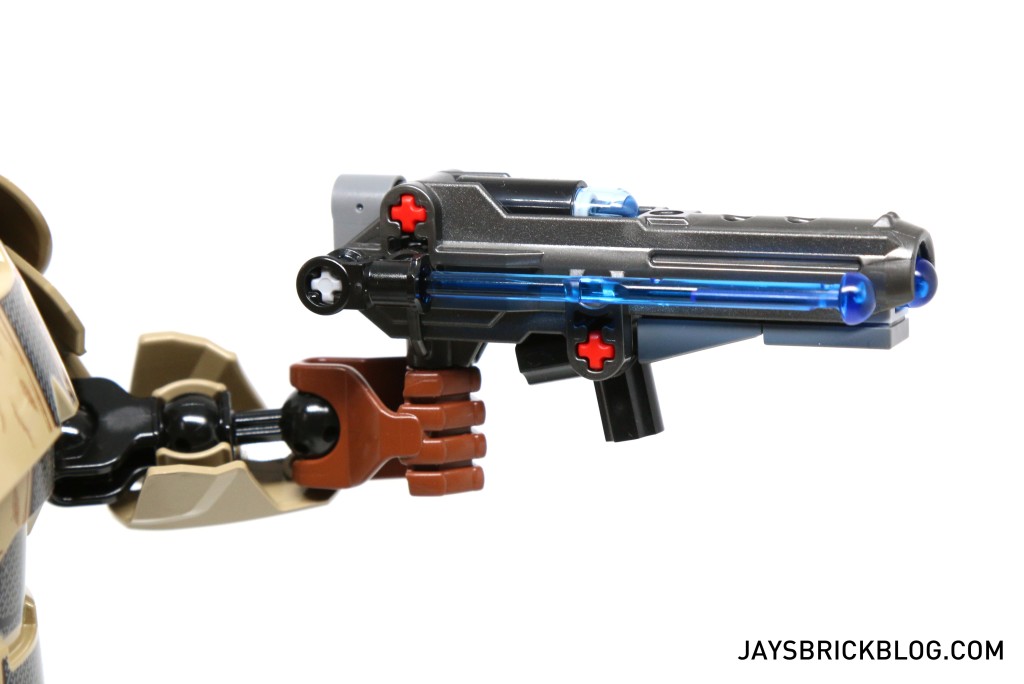 The blaster actually looks pretty good and has the right proportions to make it believable enough for Finn to be holding. There’s even an area to the side where you can attach a spare laser piece for quick reloading. 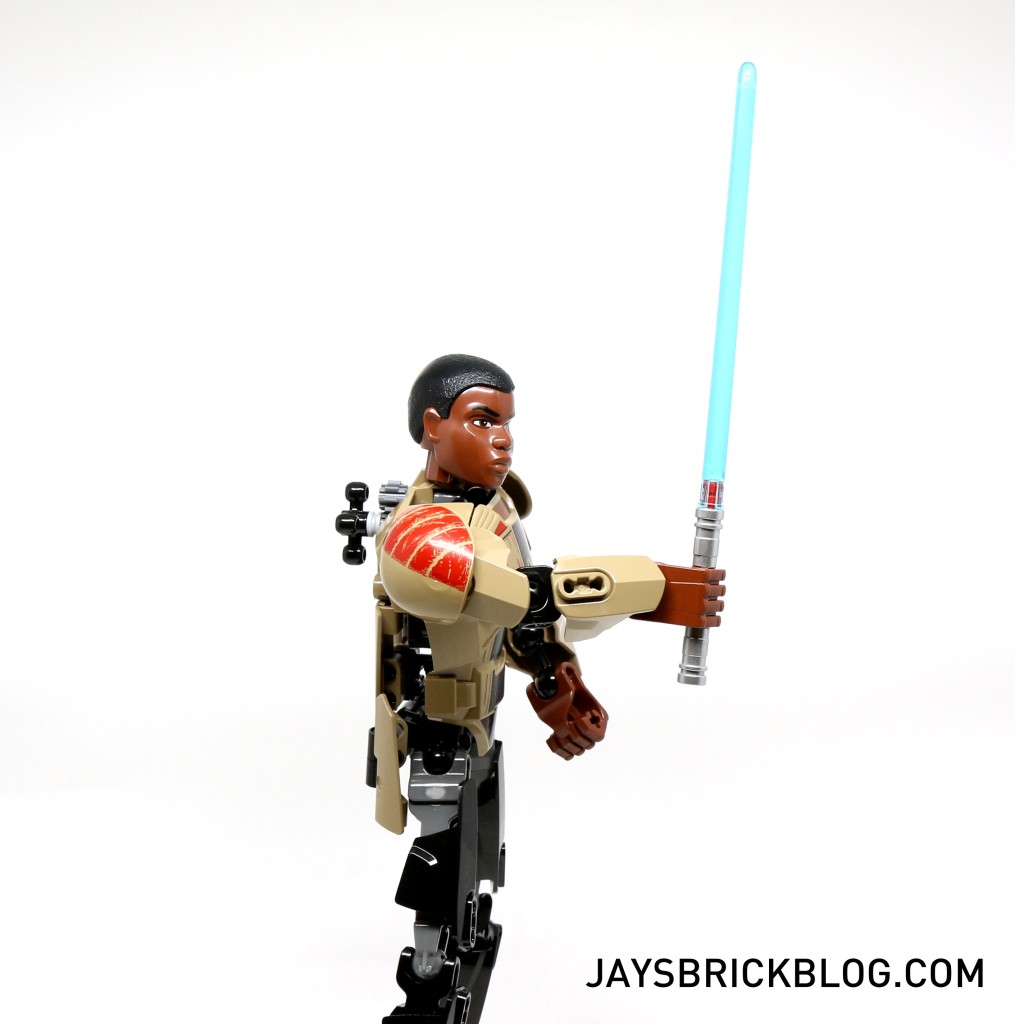 Here’s a look at Finn’s lightsaber which also looks pretty good. The hilt might seem a little too long, but it’s a very minor detail as it looks great in Finn’s hands.

Like Kylo Ren, Finn has some play features built into his body – by twisting a knob in his back, you can make his lightsaber arm perform a chopping motion. It’s incredibly cheesy, but I quite like the old-school action figure look and feel that it tries to replicate. 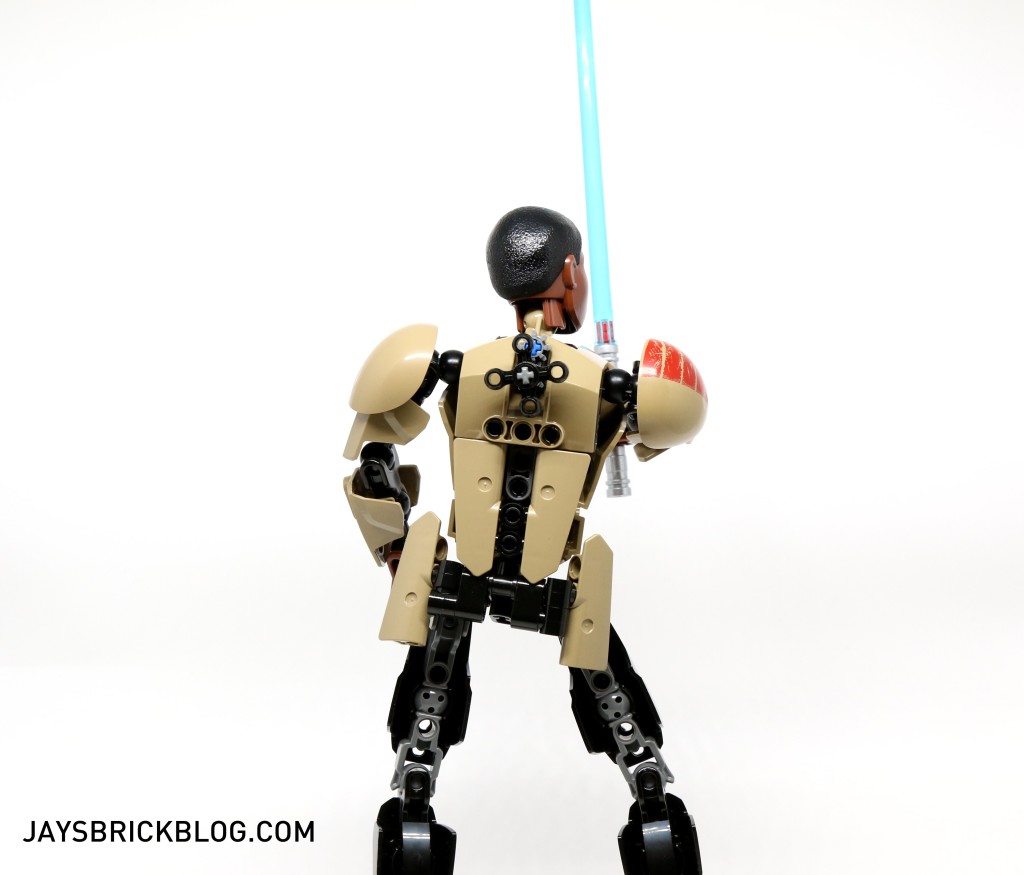 Here’s a look at Finn’s back. Ugh – incredibly ugly. I have no idea what’s going on behind. In between the different technic pieces cobbled together awkwardly, it just looks like a mess that you wouldn’t want to be a part of. My honest opinion? All Star Wars buildable figures should have fabric capes to obscure all this disjointed detail behind. 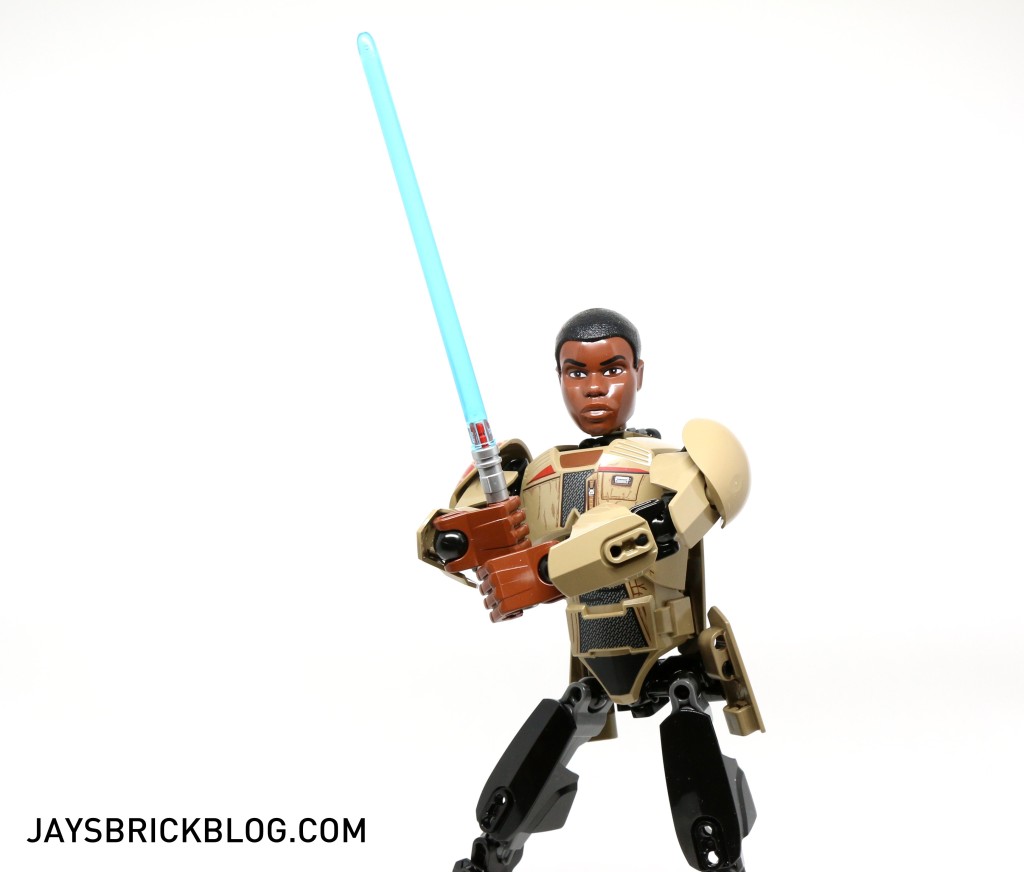 Like all the buildable figures in the theme, there are a myriad of ways you can customise and pose Finn in. Here’s Finn in one of his most iconic poses, as he readies himself with the lightsaber for the oncoming onslaught that is Kylo Ren.

Don’t get me wrong, I do like the whole buildable action figure category that is made possible by the Constraction figures and I think that they’re quite a lot of fun, especially for younger kids who might be more the target market for action figures – Finn just doesn’t seem to hit it home for me.

Final thoughts:  The problem with Finn is a simple one – he looks too much like some weird cyborg/android that was cobbled together in a lab by a mad scientist trying to combine a human with a machine. With buildable figures like Kylo Ren and Darth Vader, their appearances are quite fitting as they look quite ominous and almost robotic.

These same perks simply do not translate well to human characters like Finn. While his relatively realistic face is quite an impressive piece of plastic, the rest of his body, from his armour plated-looking torso to barebones legs just make for a very awkward and unnatural looking figure.

If you’re a fan of the buildable figures, Finn in pretty much a must-buy thanks to his prominence in The Force Awakens, but for a regular Star Wars fan, he doesn’t quite command the same menacing aura that constraction figures like Kylo Ren or Darth Vader possesses. As someone dabbling into this theme with utmost hesitance, I didn’t really find a lot about Finn that screamed “buy him!”.

Give this buildable figure a pass and spend your money on something cooler like Kylo Ren or Phasma, which I aim to review soon. 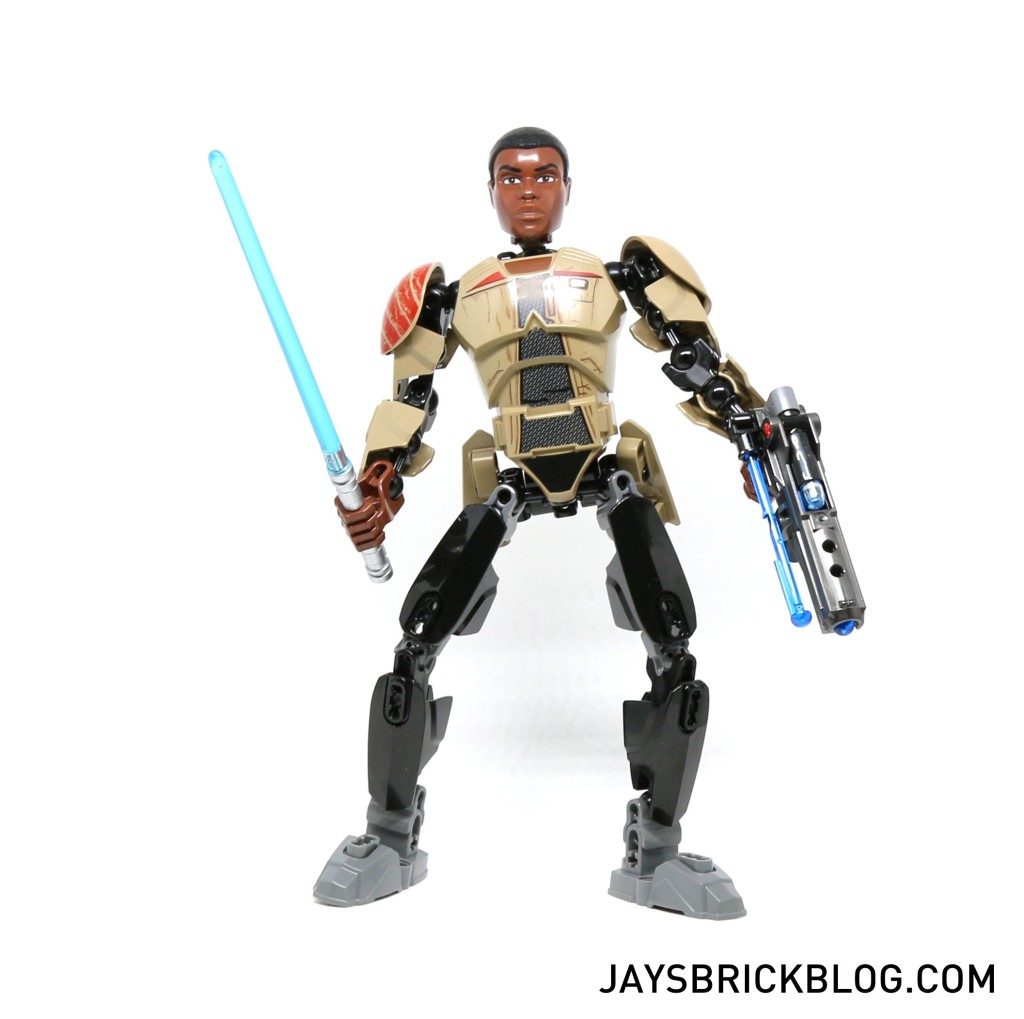 Thanks so much for reading! Do let me know in the comments if you own Finn and what your thoughts are on him.

As of the publish date of this post, Finn still isn’t available at retail stores but he should arrive in the next few weeks. You can also order a set online from LEGO.com if you don’t want to wait.