Brickheadz has to be one of LEGO’s most persistant themes – despite releases slowing down to only a handful each year (such as the Disney ones from early 2020), the odd Brickheadz or two keep popping up every other month to ensure collectors keep collectin’.

One of the most anticipated Brickheadz this year is undoubtedly 75317 The Mandalorian & Baby Yoda (I refuse to call him the Child). For starters, it’s been ages since the last proper Star Wars Brickheadz, and The Mandalorian has been one of the few bright sparks of hope amongst Star Wars fans.

I pre-ordered this set (and the Razor Crest) way back in March when they were first announced, and kinda forgot about them until they turned up at my door last week, so here’s a short review of the LEGO Mandalorian and Baby Yoda Brickheadz set! 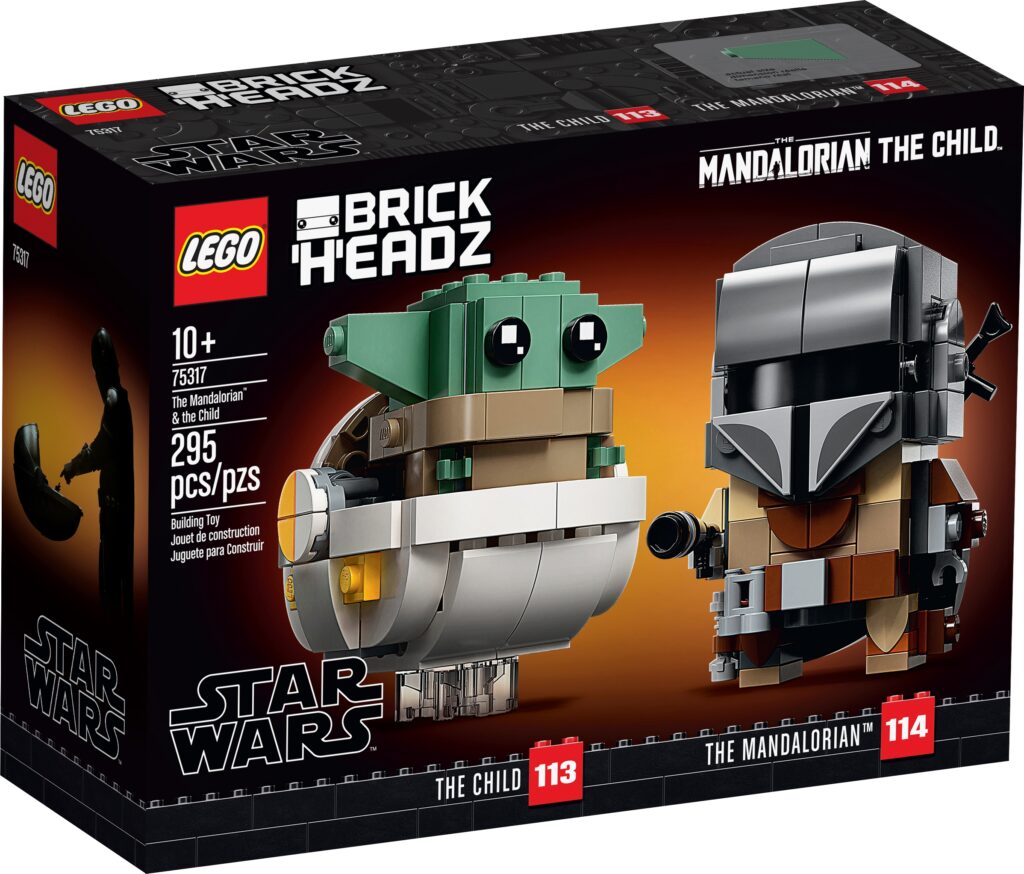 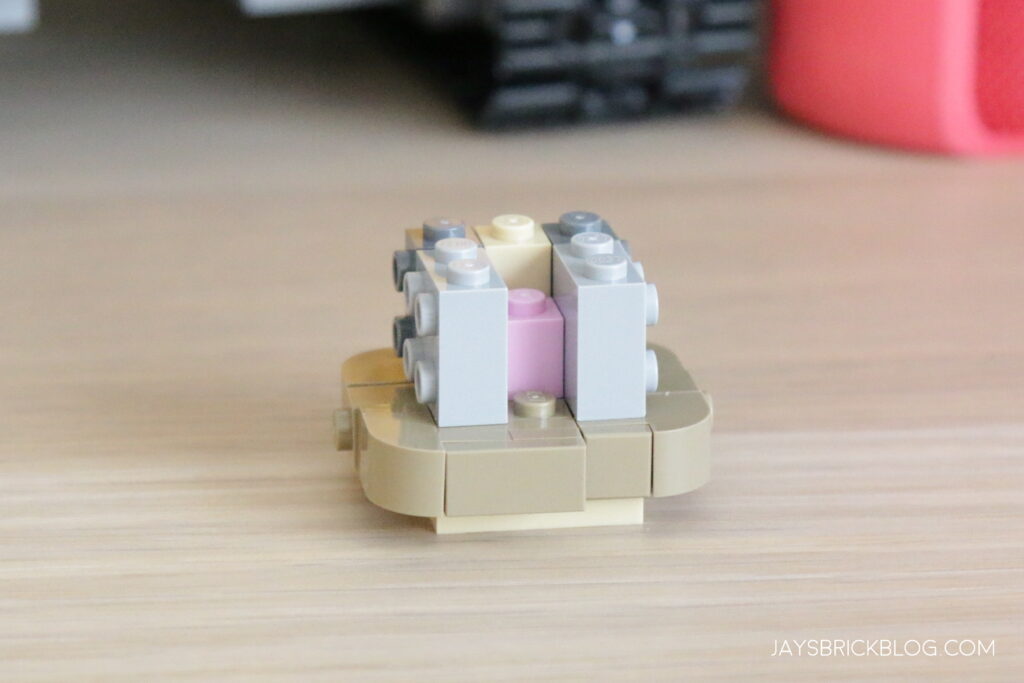 The build, like most Brickheadz was quite brisk and enjoyable, and putting together Baby Yoda’s floating crib was a highlight, as it made for a unique experience compared to your typical Brickheadz build.

Like all Brickheadz, even Baby Yoda has a pink brain brick which is hidden inside its head which I always look forward to. 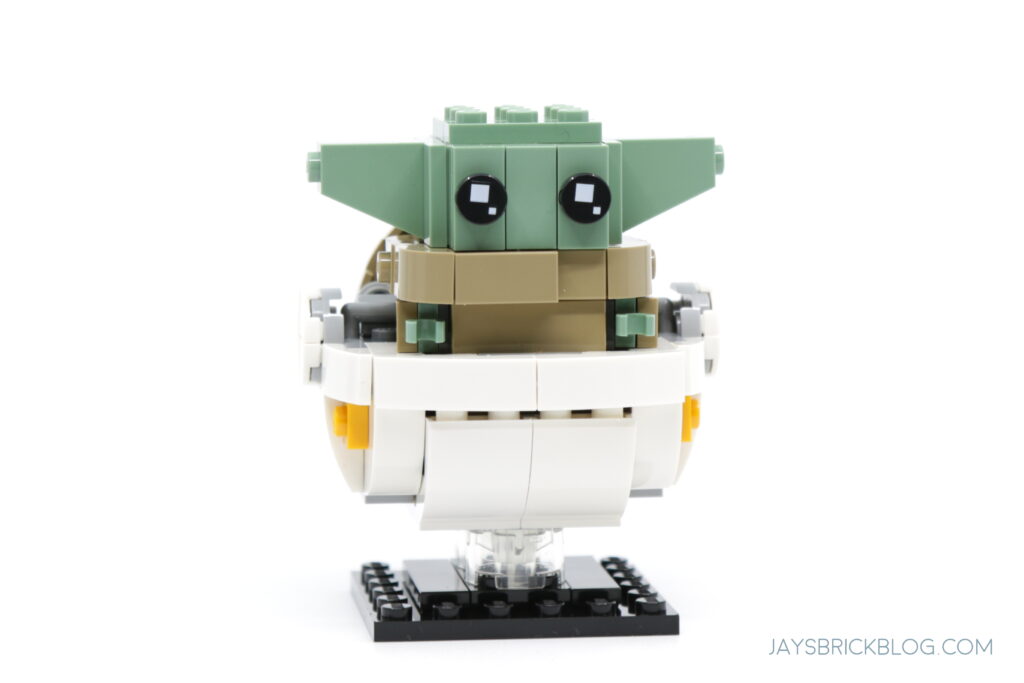 Baby Yoda (or known officially as the Child)  was the surprise breakout hit of late 2019, completely taking over the internet with its cuteness and the Brickheadz does not disappoint. 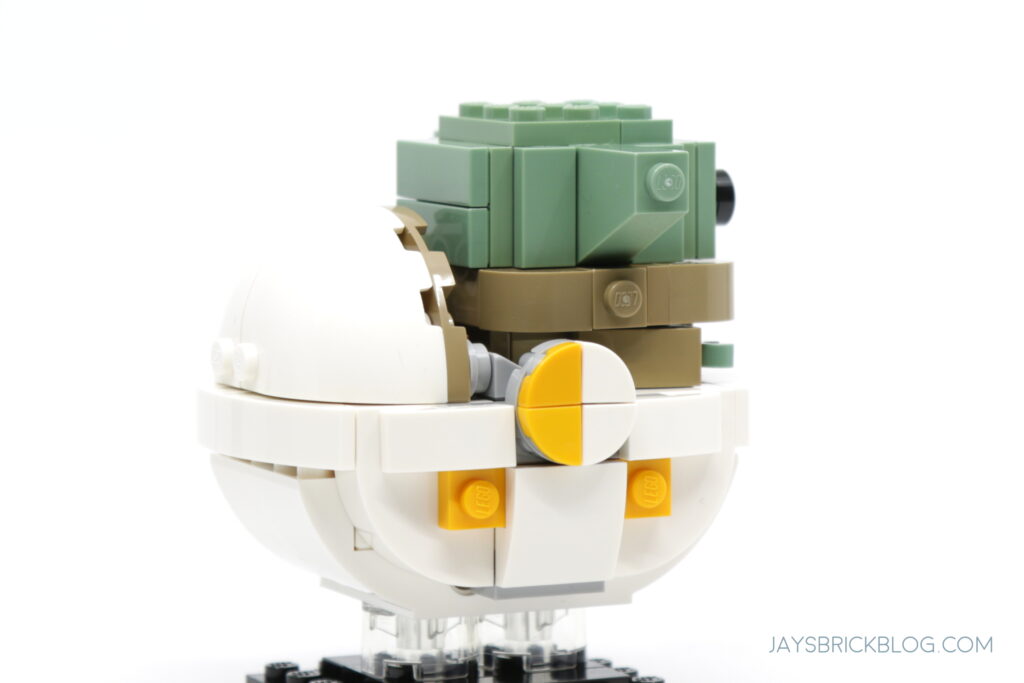 The egg-shaped floating crib is mostly created using SNOT-techniques, so has a particularly smooth finish to it which is nice. Here’s how it looks from the side. 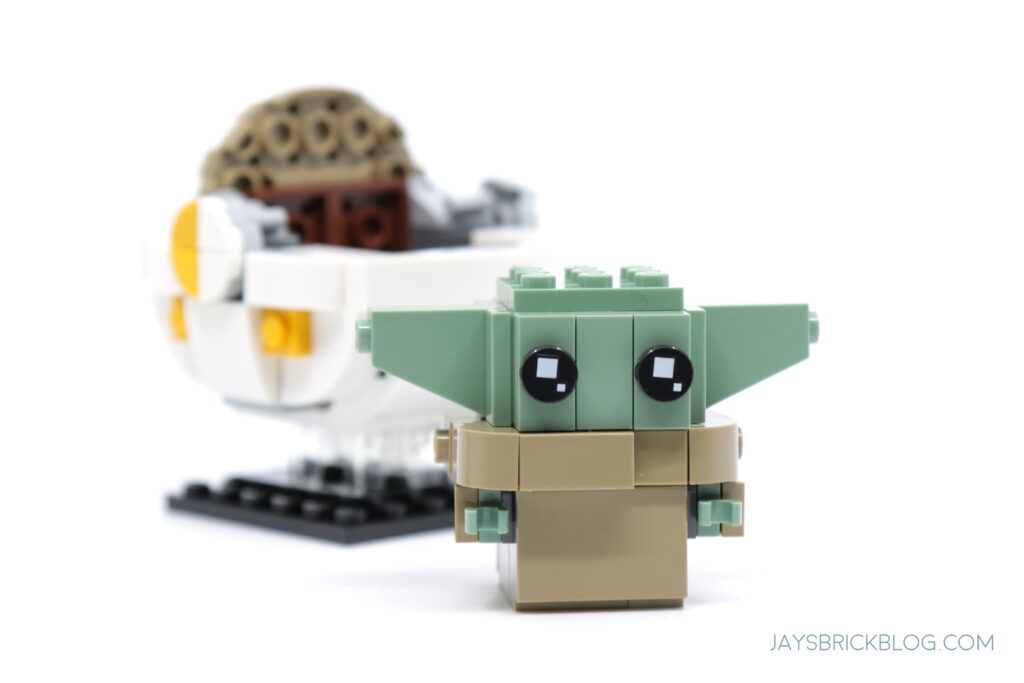 Of course, Baby Yoda does function like a mini-Brickheadz and can disembark from his crib, to reveal his entire body which is mostly made out of dark tan robes. 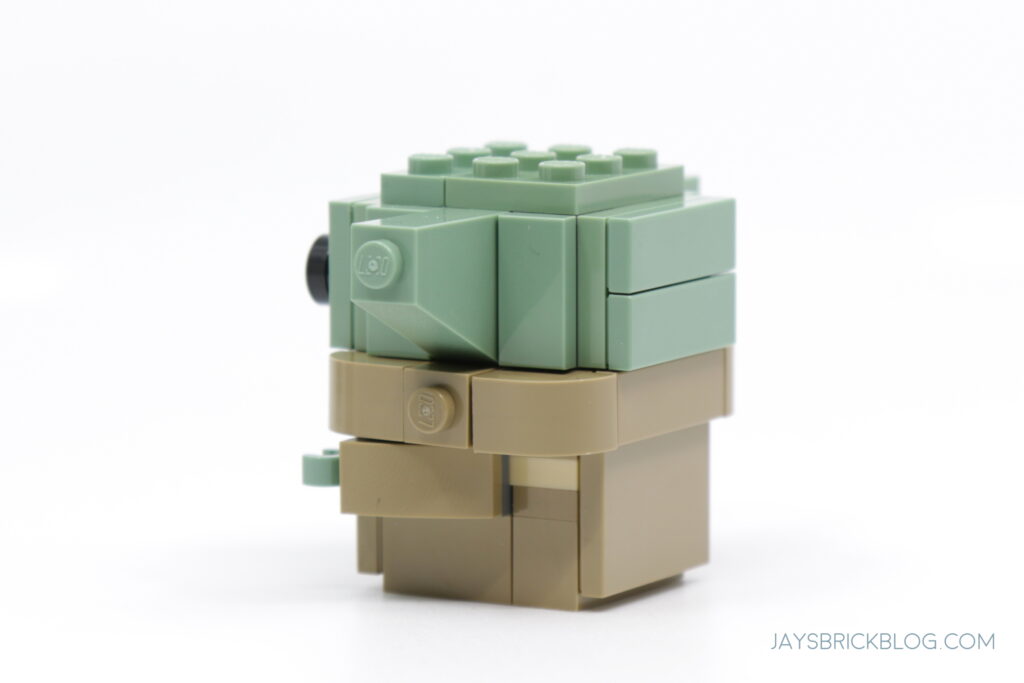 I do like that Baby Yoda doesn’t have any “legs”, and that his proportions are just perfectly suited for the Brickheadz format. 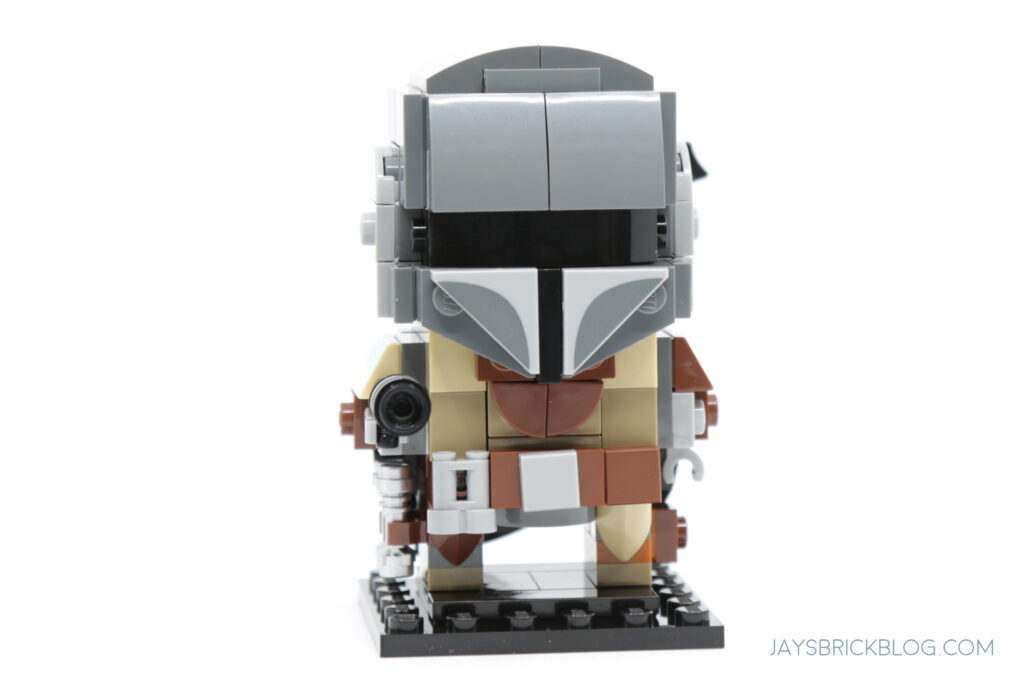 Up next is Din Djarin, or better known as The Mandalorian, a mysterious bounty hunter steeped in the warrior traditions of Mandalore.

The Brickheadz is modelled very much like 2018’s Boba Fett Brickheadz, so if you own it, you’ll find that the build and design are pretty identical, such as the cool technique used to assemble his helmet. 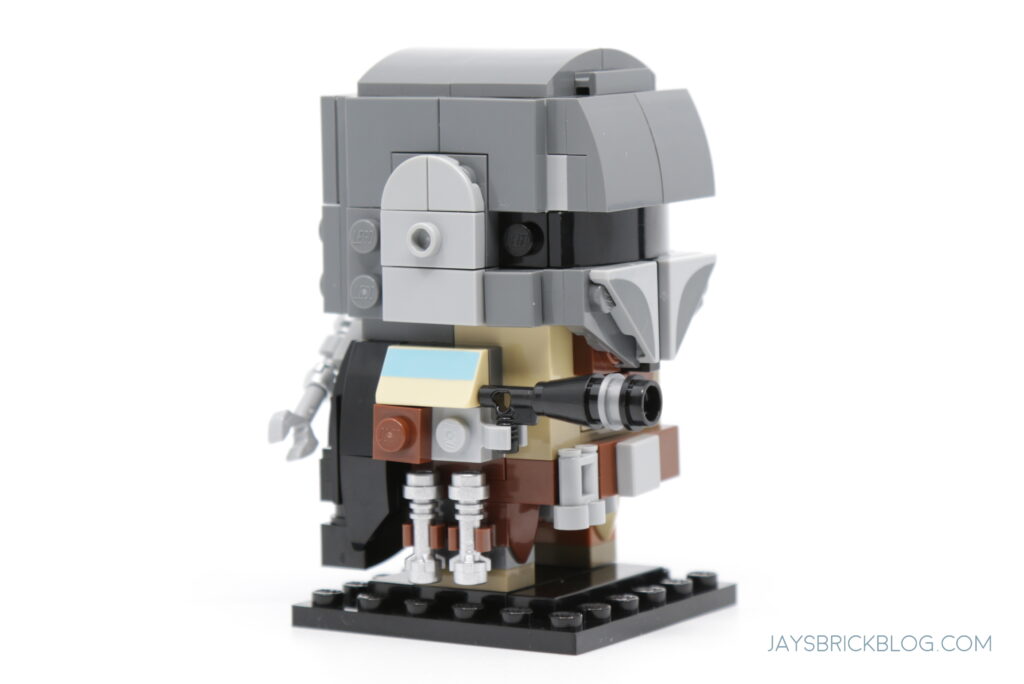 The Mandalorian is much more rugged, combining tan and brown elements that act as bits of his leather outfit.

In his right arm is a blaster, and on his right shoulder, a printed 2×1 cheese slope which has a pale blue strip on it, which mimics the Mandalorian’s TV armor, before he replaced it with shinier Beskar. 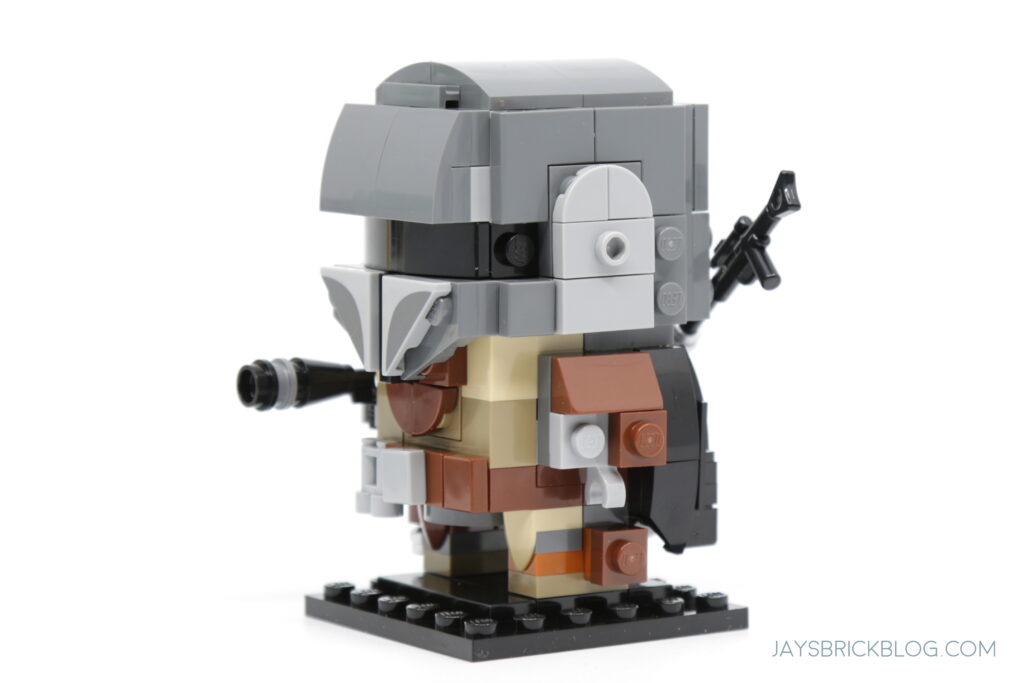 Here’s his left side. I really like the clever kneepads on his feet. 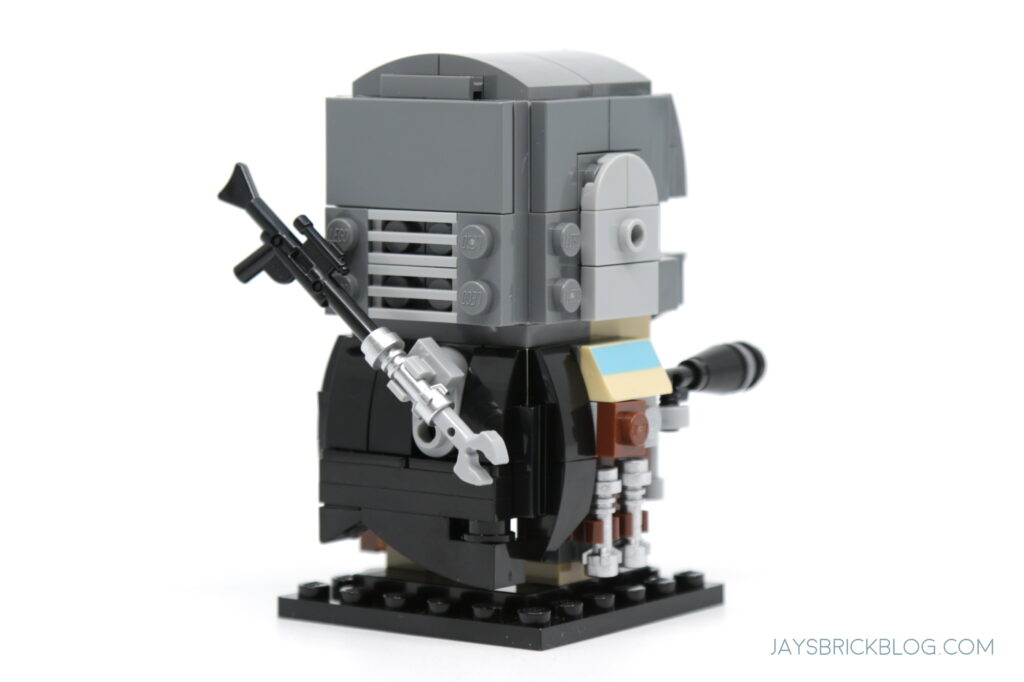 The Mandalorian’s back is equally impressive – on his back is his strapped Amban phase-pulse blaster which you may remember as being responsible for vaporising Jawas in the TV show.

I also really like his brick-built black cape which adds a nice little bit of shape to the Mandalorian’s body.

It feels like the Mandalorian is one of the most detailed and textured Brickheadz that I’ve built, and the colour choices of many features such as his mismatched shoulderpads are amazing little additions. 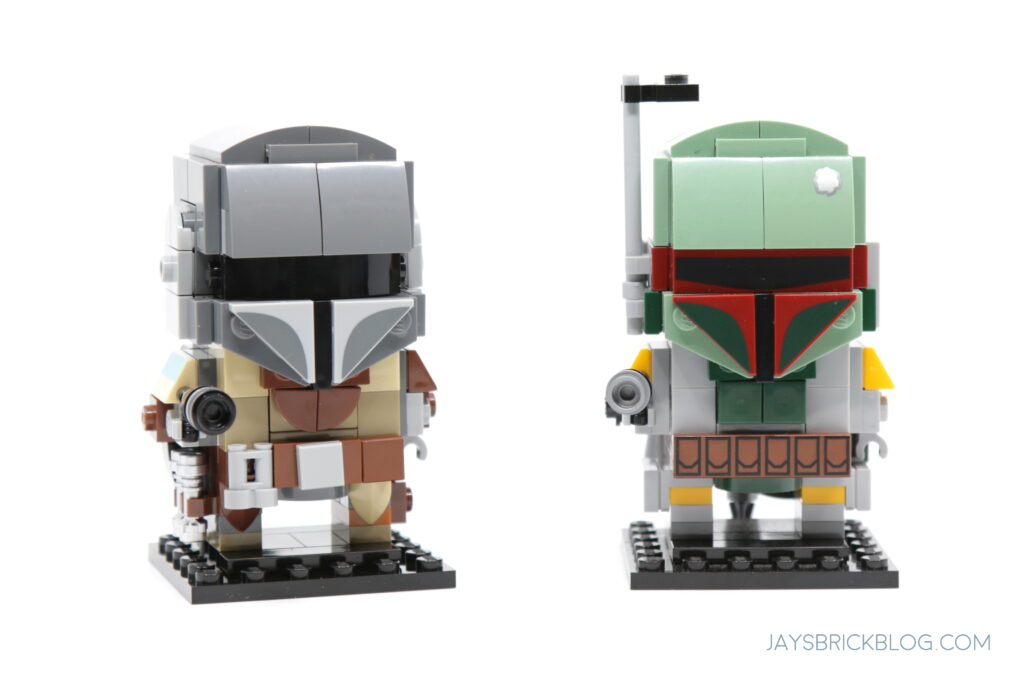 Here’s a comparison with the Boba Fett Brickheadz, which seems so flat and blocky compared to the Mandalorian.

The Mandalorian also benefits from being less reliant on printed elements for details, and instead uses colour and textural elements to create its sense of dtail. 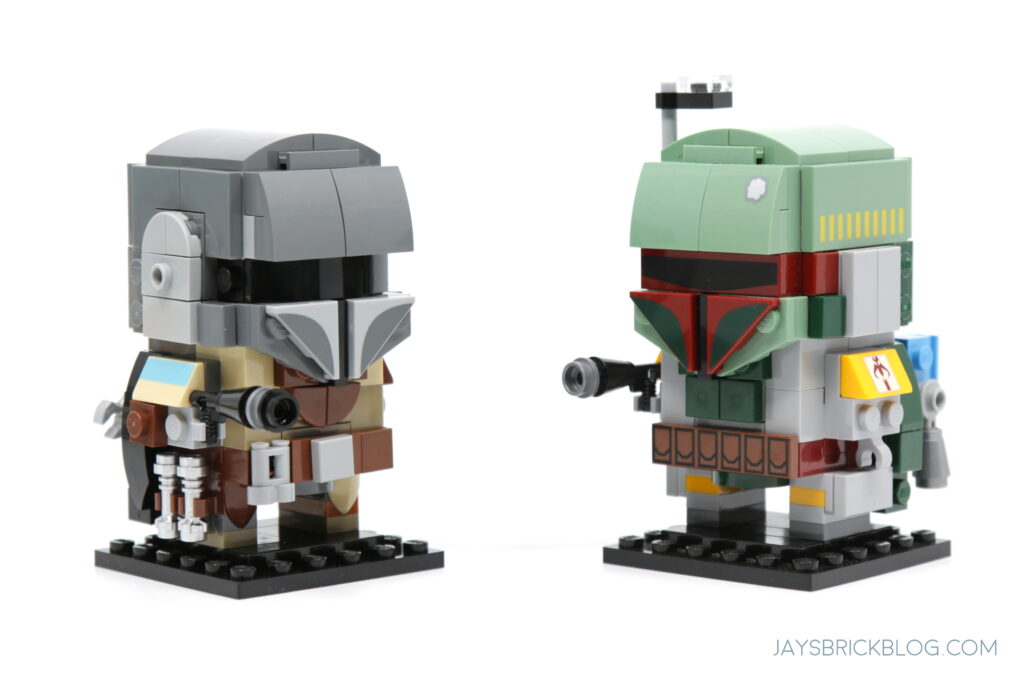 As a big fan of both Bounty Hunters, they do look amazing next to each other. 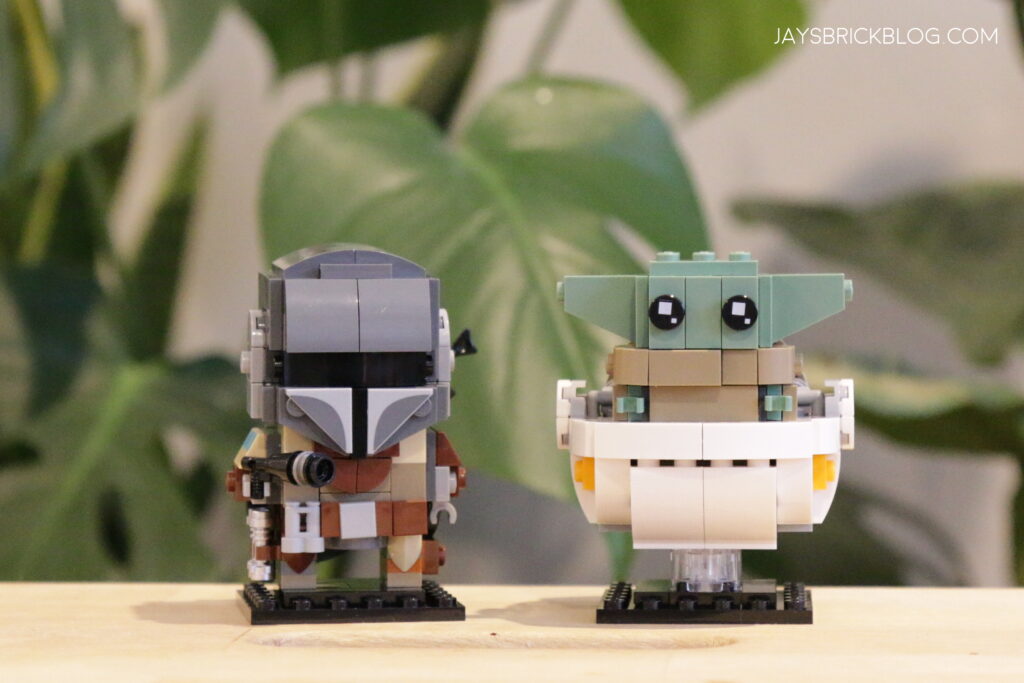 Final thoughts: It’s been such a long time since the last Star Wars Brickheadz (Kylo Ren and Sith Trooper from late 2019), so this will be greatly welcomed by Star Wars fans.

The Mandalorian and Baby Yoda Brickheadz certainly does not disappoint, especially if you’re looking to get your Mandalorian LEGO merch fix, and make for great, easy-to-display and build sets that won’t break the bank.

The best thing about this set is that LEGO didn’t phone it in to cash in on hype from The Mandalorian – both Din Djarin and the Child sport excellent and varied designs, most evident by the level of detail crammed into The Mandalorian Brickheadz.

That said, I think LEGO really missed out on making this an exceptional set by omitting the use of chromed/reflective elements for The Mandalorian’s helmet.

For those of you that don’t watch the show, it revolves around The Mandalorian taking up bounty hunting jobs to accumulate piece of Beskar (Mandalorian steel), which he then uses for his body armour.

Beskar is incredibly resistant to damage and blaster fire, and also shiny, and I would’ve loved seeing his helmet at least made out of chromed elements.

That said, if you love The Mandalorian TV series, or Brickheadz, this is a worthwhile pickup, and you can order this set from LEGO.com. 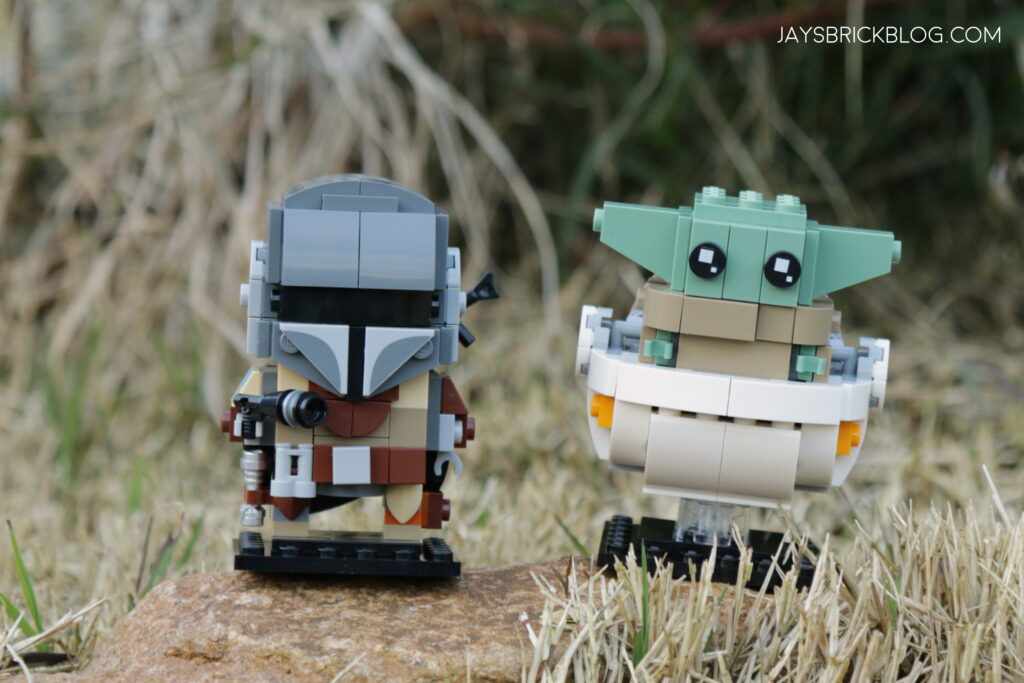 Thanks for reading this relatively short review! I can’t wait to get my hands on the Razor Crest which will be released in September, so hopefully I’ll find time to write a review on it – just in time to get excited about Season 2 of the Mandalorian which premieres on Disney+ in October 2020.

You can also follow me on Youtube where I’ve been uploading short videos of me building LEGO, with the most recent being my build of the Haunted House

Did you pick up this set or plan on getting The Mandalorian and Bab Yoda Brickheadz set? Let me know what you think in the comments!