The LEGO Group managed to delight and thrill fans of all ages when they unexpectedly announced that they were producing LEGO Scooby Doo sets earlier this year.

The hallowed cartoon series and its iconic characters transformed into LEGO form was a match made in heaven, with the animated series’ bright cartoon colours translating brilliantly to LEGO bricks. I grew up watching plenty of Scooby Doo – they were a Saturday morning staple for me and I have very fond memories of the gang.

To kick off my series of LEGO Scooby Doo reviews, I’ve selected one of the standout sets of the theme – 75902 The Mystery Machine as the first set to review! 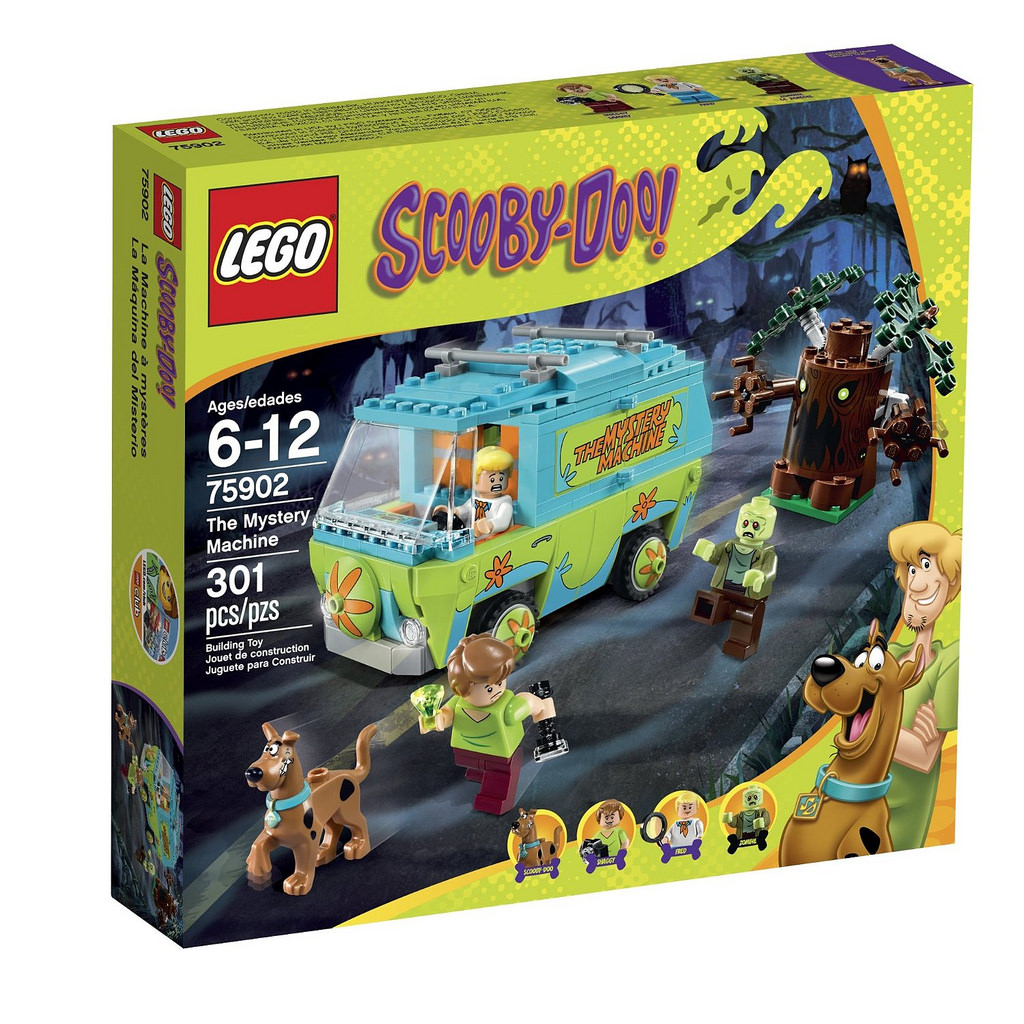 The Mystery Machine is arguably the most iconic vehicle in Scooby Doo. As the vehicle of choice of Mystery Incorporated, it’s practically part of the gang as it’s always present in most of their adventures.

LEGO Scooby Doo sets are starting to show up around Australia and I wasted no time picking the Mystery Machine up. It’s currently the most popular set out of theme as it sits in a very comfortable price point (AU$50), contains 3 major characters and of course is one of the most recognizable elements from the cartoon.

It’s so popular that you may have trouble getting your hands on it – so far, I’ve yet to see many of them in large quantities out in the wild. 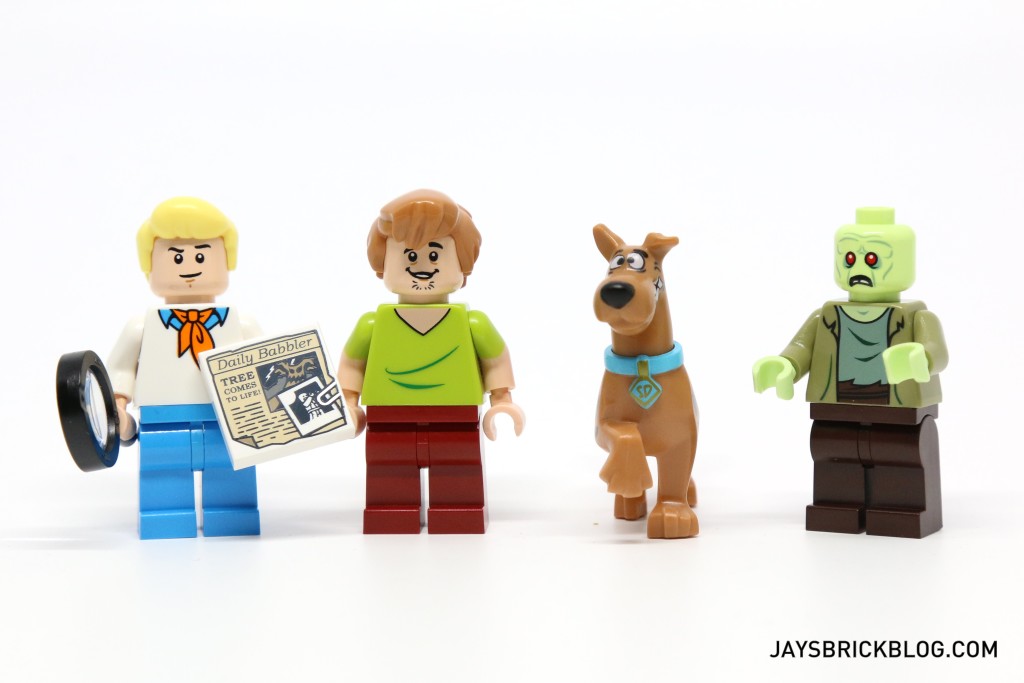 The Mystery Machine comes with 3 minifigures (Fred, Shaggy and a Zombie) and Scooby Doo himself. The lineup of minifigures are definitely one of the set’s strengths – not too shabby for a $50 set. 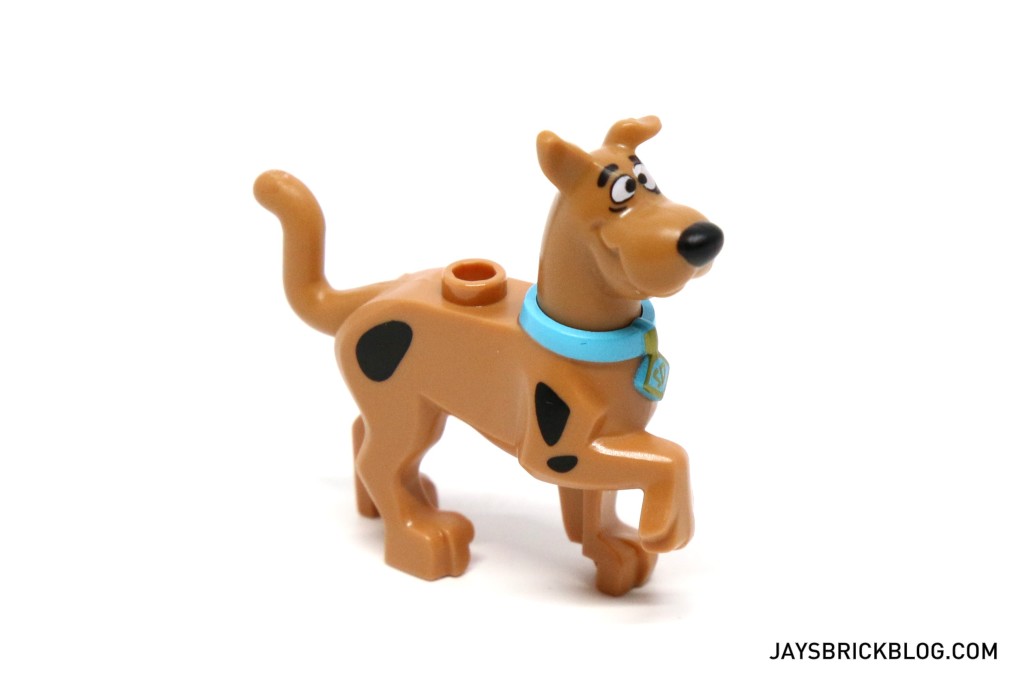 Scooby Doo is the star of the set and series, so we’re treated to a delightful new mould for the cowardly pooch. The new mould is made out of 2 parts – his detachable head and solid body. 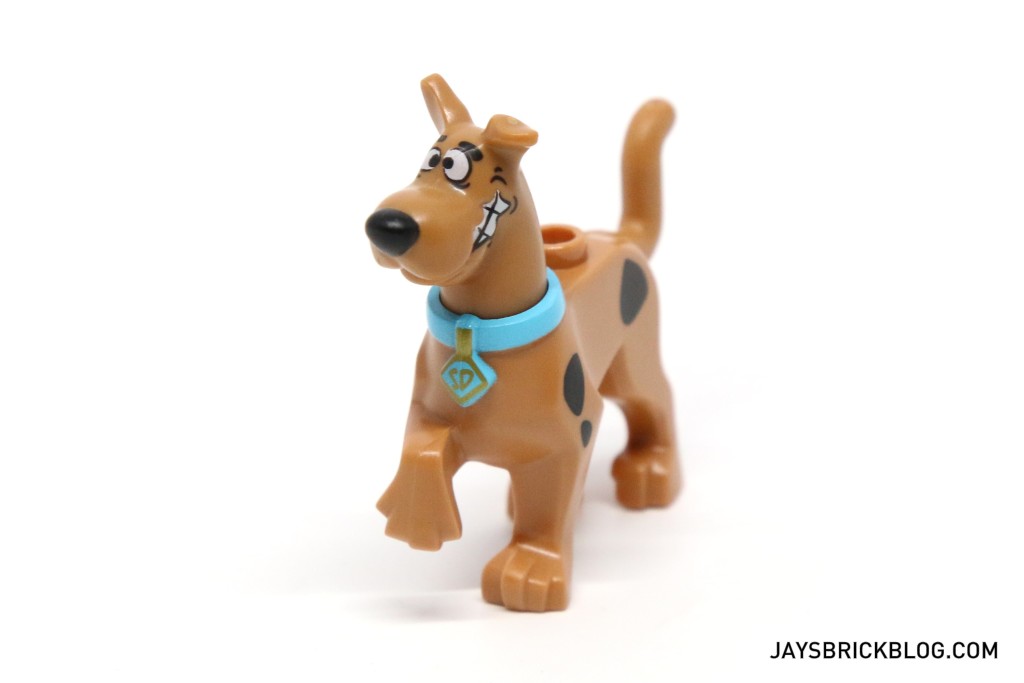 As his head is detachable, it can be swiveled around, giving Scooby some much needed articulation. The printing and other details around his body are quite impressive – everything is sharp and crispy and I really like Scooby’s terrified grimace/smile. 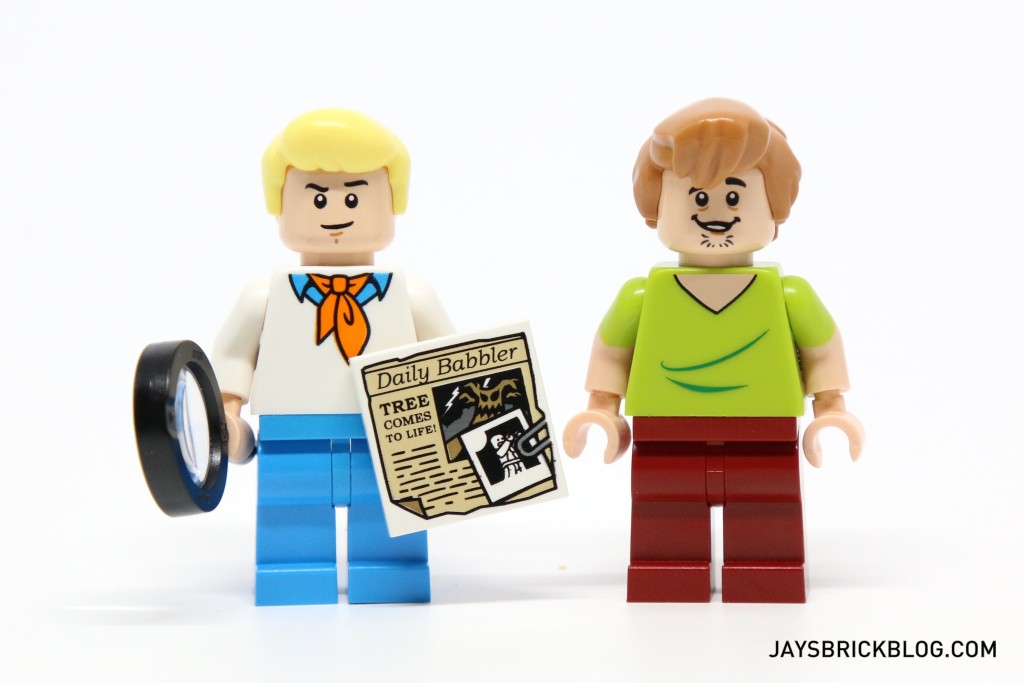 Fred and Shaggy are the two other main characters included and they’re both really likeable minifigures as well. I can’t say this enough – Scooby Doo cartoon characters translate really well to the LEGO form.

The most interesting thing about Fred and Shaggy are their brand new hairpieces, with both making their debut in the Scooby Doo theme. I particularly like Fred’s the most. Shaggy’s hair is a little too “big”, making the proportions look slightly off.

Both of them have simple yet accurate torsos – Fred with his orange cravat and Shaggy with his green v-neck shirt. I really love the vibrant colours, especially Fred’s bright blue slacks. Fred and Shaggy’s faces are generic looking enough that they could easily be reused in other minifigures. 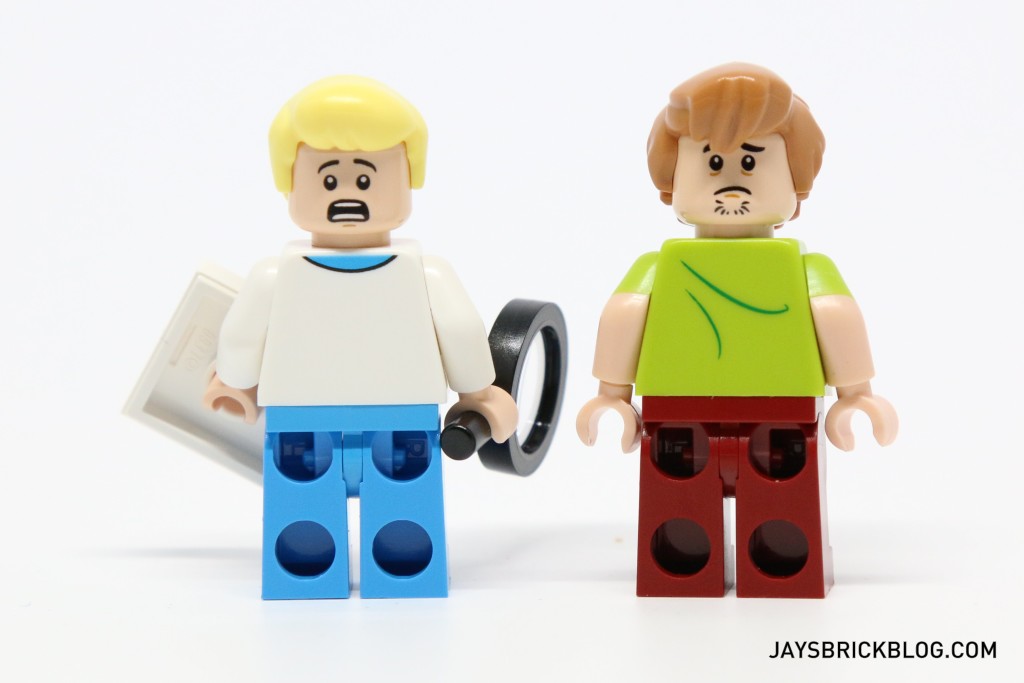 Being minifigures in a licensed set, it’s not surprising that they each have an alternate face. Fred has a shocked face whereas Shaggy has a slightly quizzical “I don’t think this is a good idea” expression going on, which fit the theme of the set. They also both have minimal back printing to give their backs a little fabric texture. 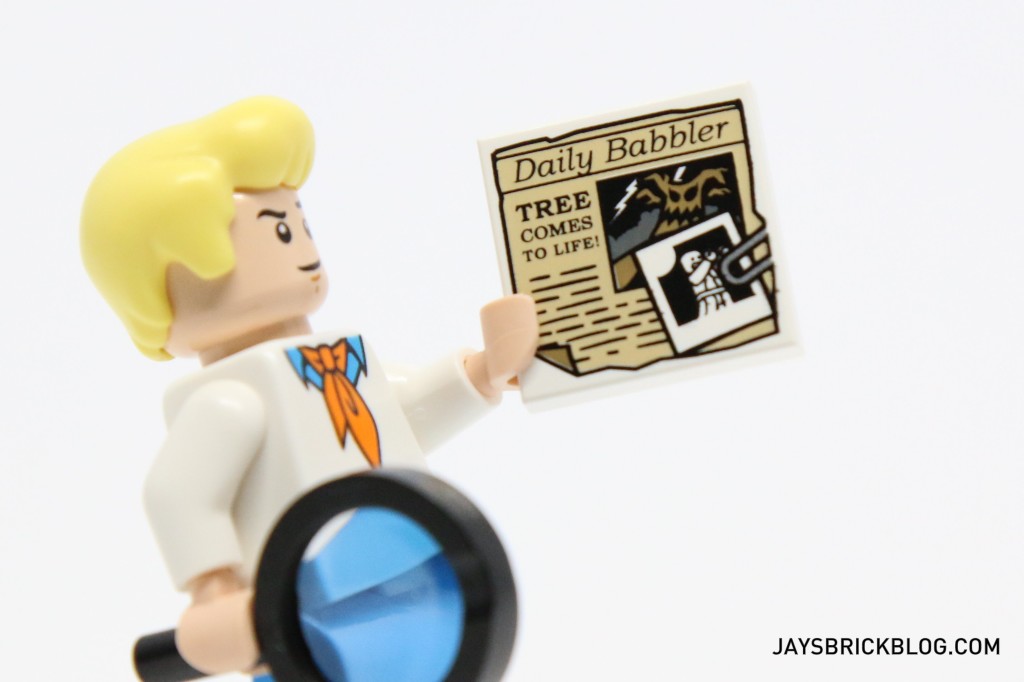 Fred’s accessory is a printed newspaper clipping tile, which I believe is a clue the gang uses to solve the mystery of the Spooky Tree. 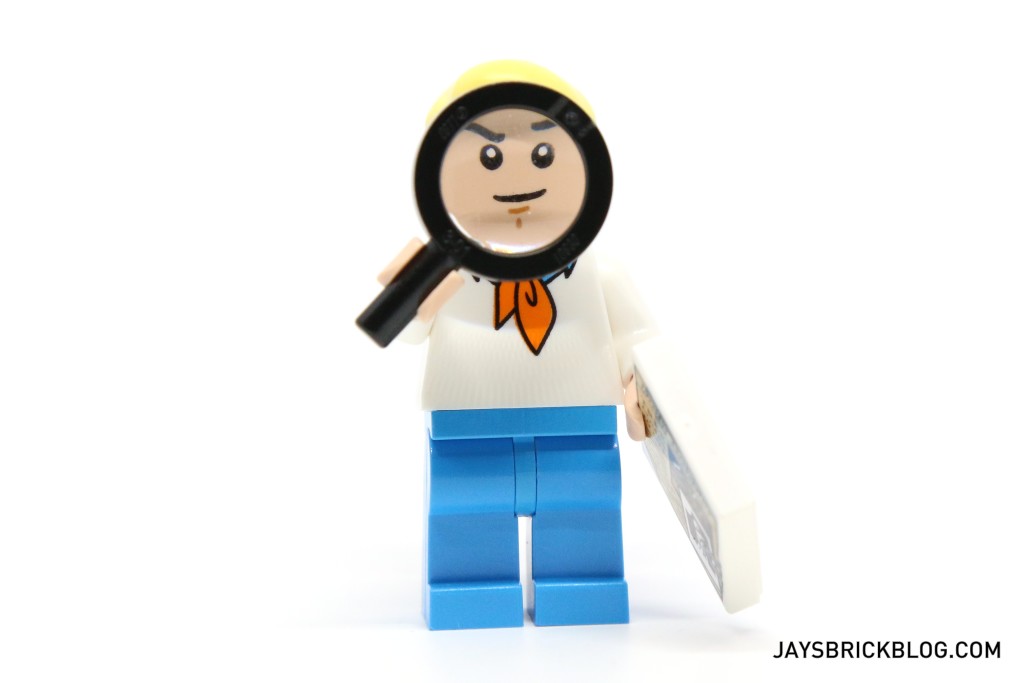 One of my favourite LEGO accessories is the fully functional magnifying glass. Can’t solve a good mystery without the help of one. 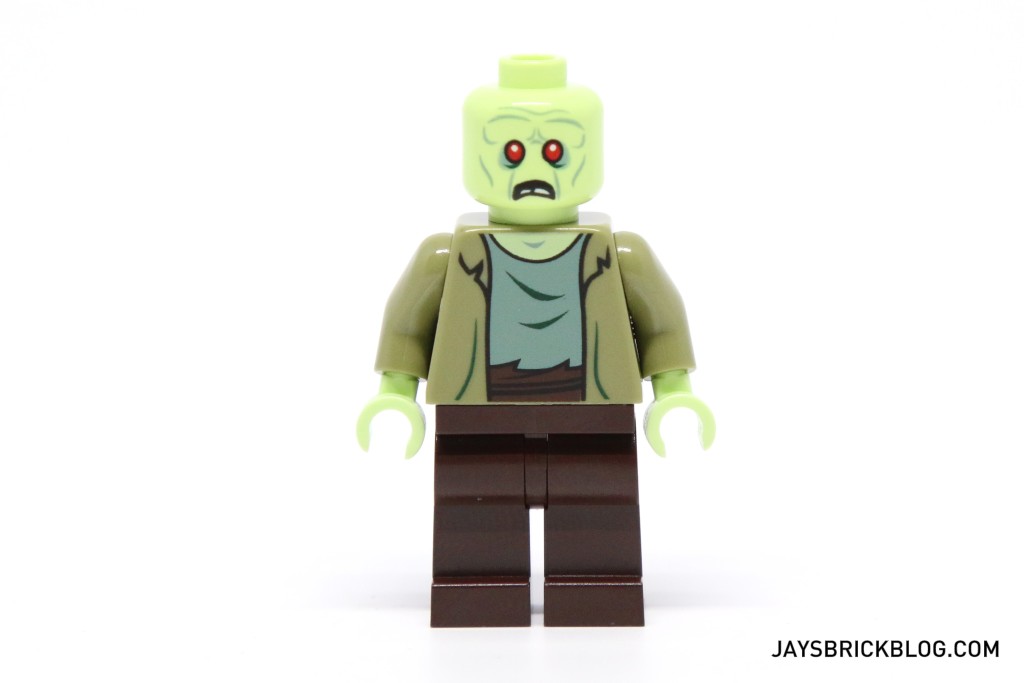 This is the Zombie or Zeke as he’s called in the official description. I don’t watch the cartoons so I don’t know if he’s a significant character so I’m just going to call him Zombie. As Zombies go, he is actually really amazing. I love his ghoulish green skin tone which gives him a very spooky vibe.

At first glance, I was excited because the shade of green made me believe that his face and arms were glow in the dark (they look exactly like glow in the dark stars) but alas they’re just regular plastic. A glow in the dark Zombie would be a really cool character and I was quite surprised that LEGO didn’t include it in a theme that’s all about ghosts and spooky mysteries.

The Zombie has a shabby (although not tattered) outfit which looks more like a hobo’s wardrobe than someone who has risen from the dead. 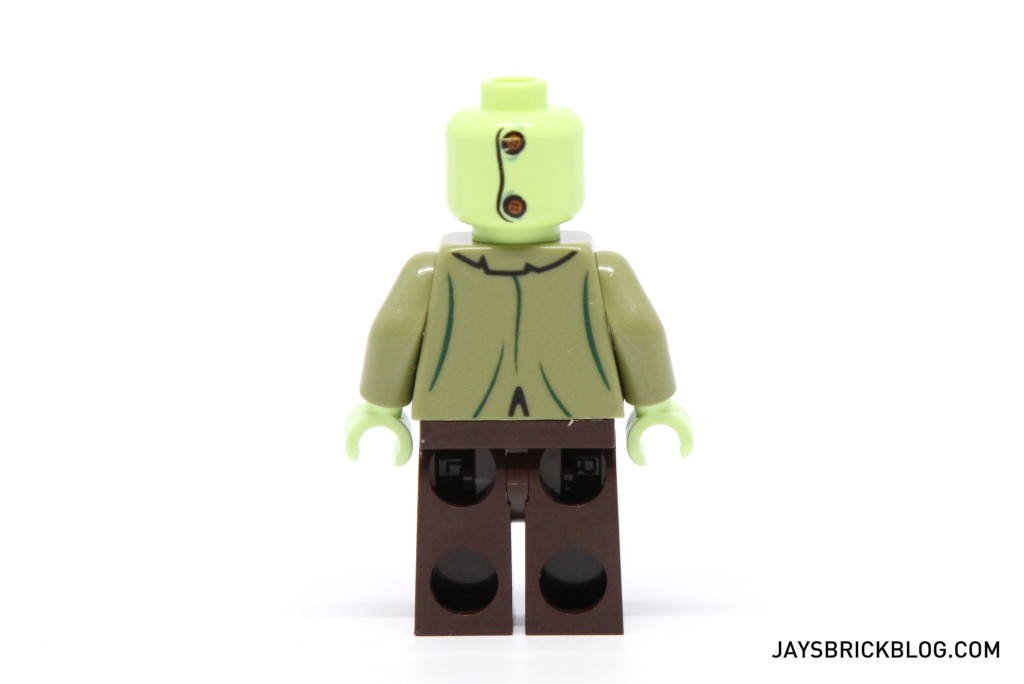 The Zombie has back torso printing and some important details on the back of its head. Looks like the Zombie might not be real and might’ve just been wearing a dude in a mask! Who da thunk! 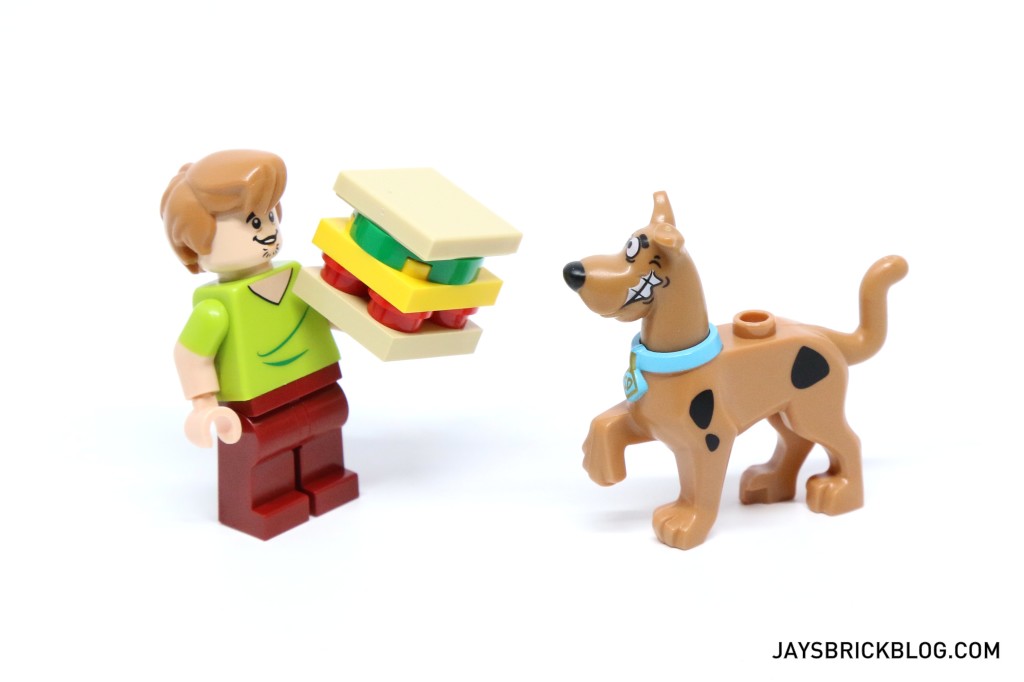 Oh and you also get a giant sandwich as well. 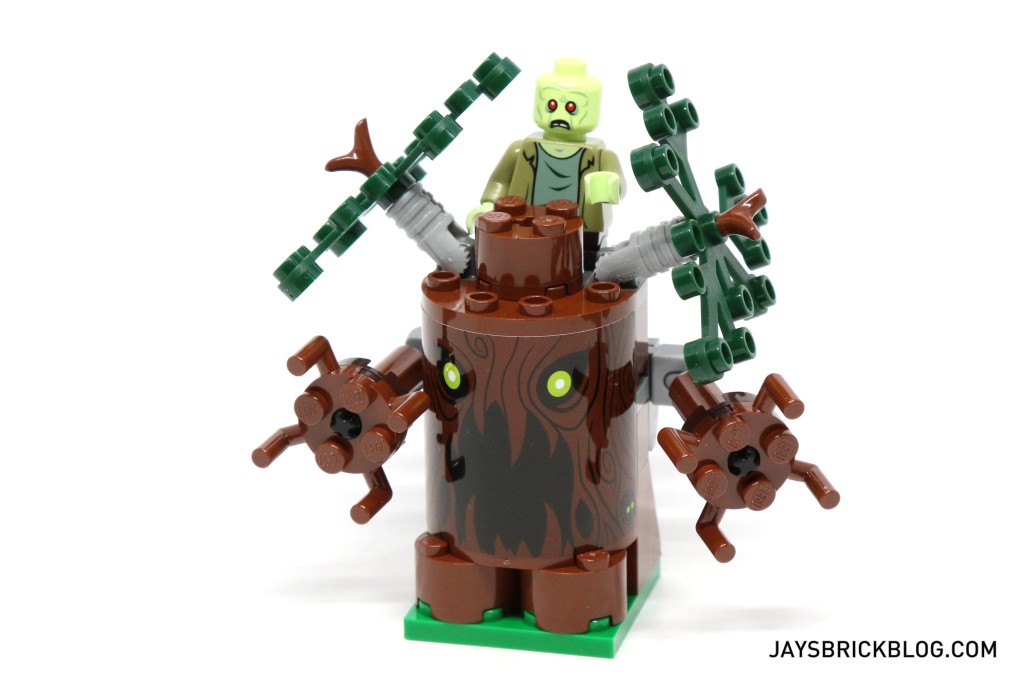 The first thing you assemble is the Spooky Tree that has been terrorising the unnamed town. I have to mention that it doesn’t look at all like a tree – more like a zombified stump. There is hardly enough foliage to qualify itself as a tree.

That said, the Spooky Tree actually looks pretty attractive thanks to the huge sticker that runs across its bark, primitive looking mecha-inspired hands and of course, a spot for the Zombie to ride it. 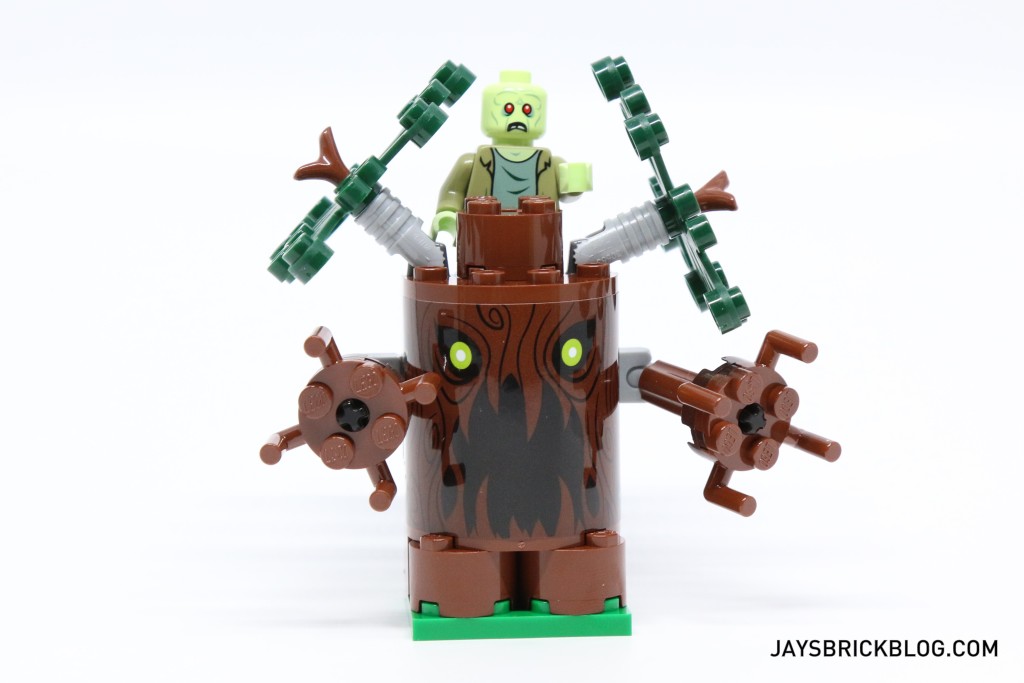 The Spooky Tree’s arms are quite poseable thanks to the ball joints giving it a bit of playability which is nice. The branches with leaves are also adjustable. 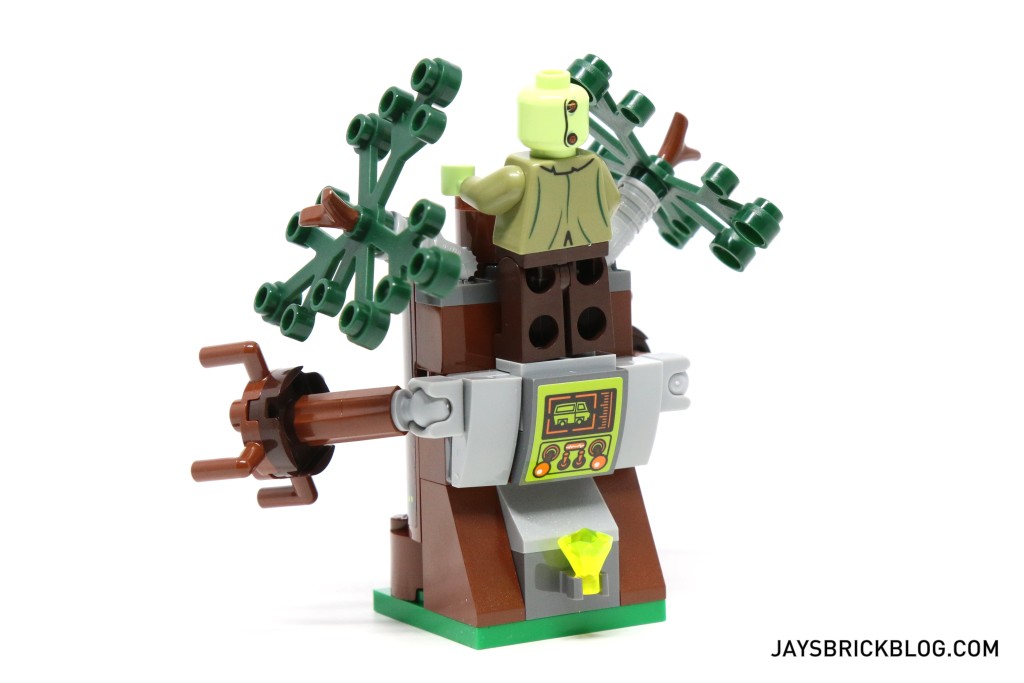 The back of the tree shows you its robotic origins. There’s a stickered control panel with the gang’s Mystery Machine in its sights as well as a couple of levers to control the Spooky Tree. Curiously, there’s a green gem stuck to the back which I assume is what’s powering the Spooky Tree. 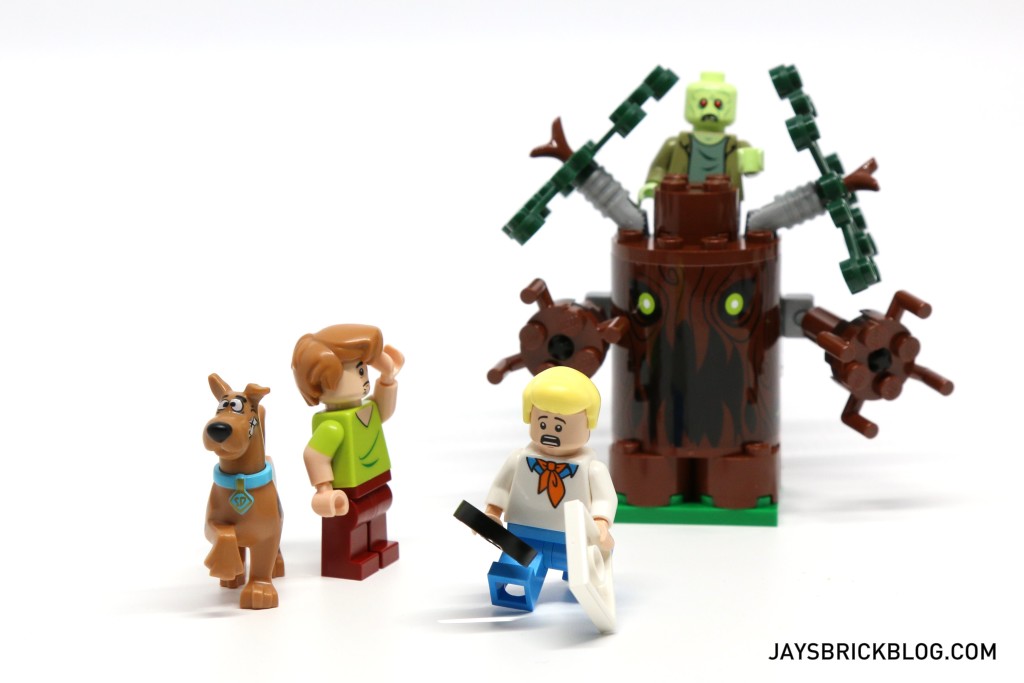 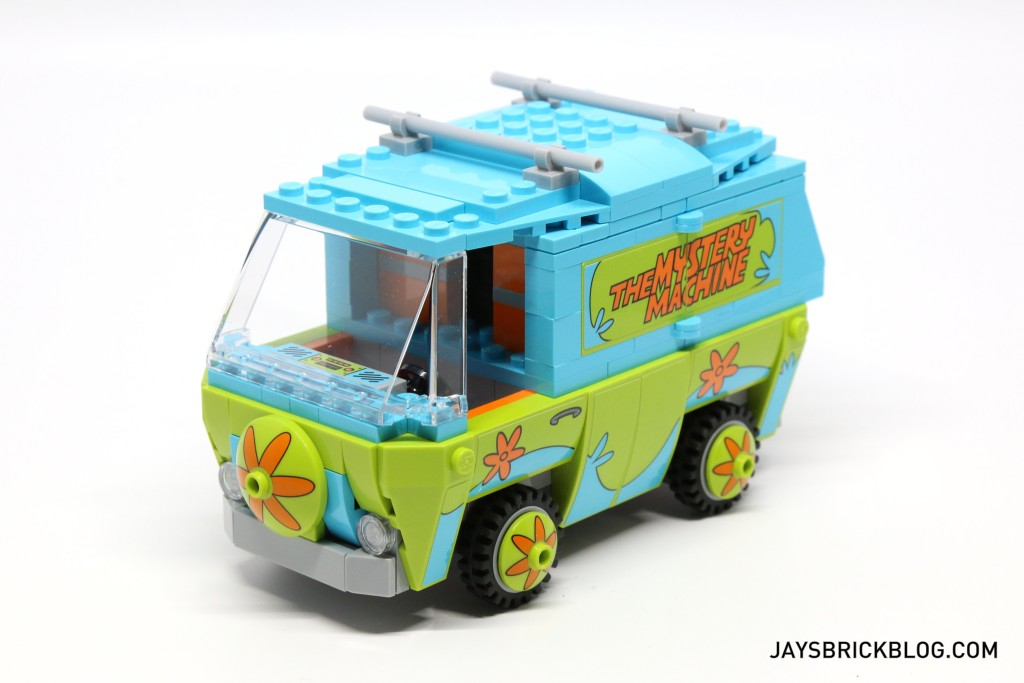 I’ll just come right out and say it – the Mystery Machine is a beautiful rendition of the gang’s vehicle of choice. The Mystery Machine’s vibrant flower-power colours are accurately represented. The pastel shades of blue and green go brilliantly together as well.

The hallmark of a great LEGO recreation is that it’s immediately recognizable – something the LEGO Mystery Machine scores maximum marks in. Purist LEGO fans might get little irritated with the ungodly amount of stickers you have to apply. I believe that there are 23 stickers in total, but thankfully most of them are relatively easy to apply.

While printed tiles and slopes are a luxury, in this case I think all the stickers are kinda justified as they give the Mystery Machine plenty of much needed personality. The hubcaps are printed which is a nice little consolation. 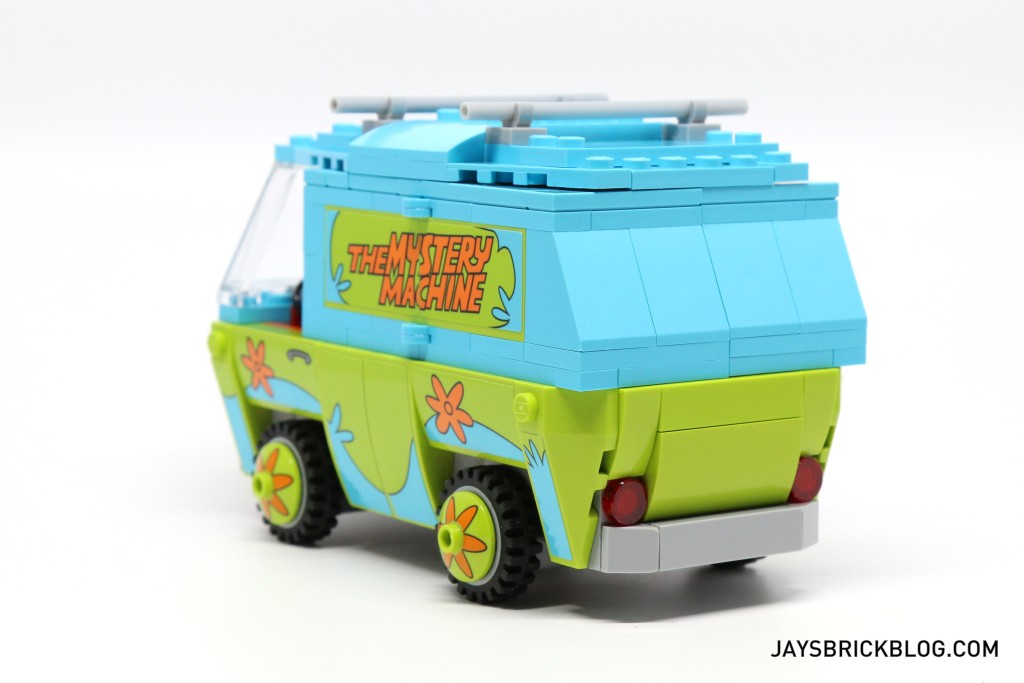 The LEGO designers have done a remarkable job capturing the van’s blocky look, while ensuring that all the subtle curves that you’d expect from the vehicle. 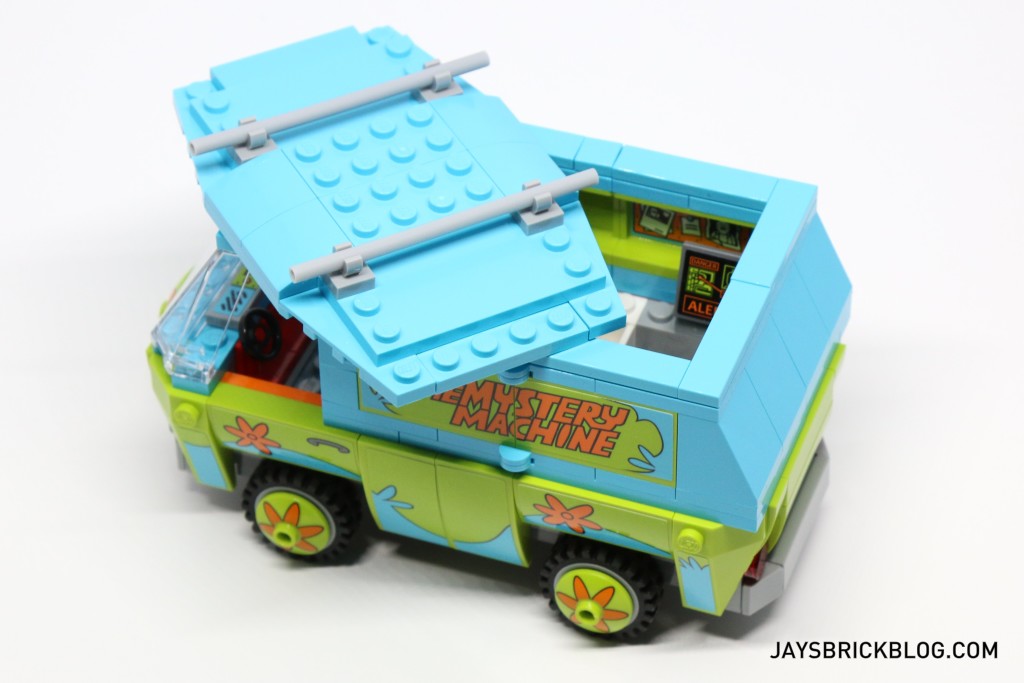 The Mystery Machine’s roof can be lifted out quite effortlessly, allowing you to have a peek inside or place the minifigures around the spacious van. 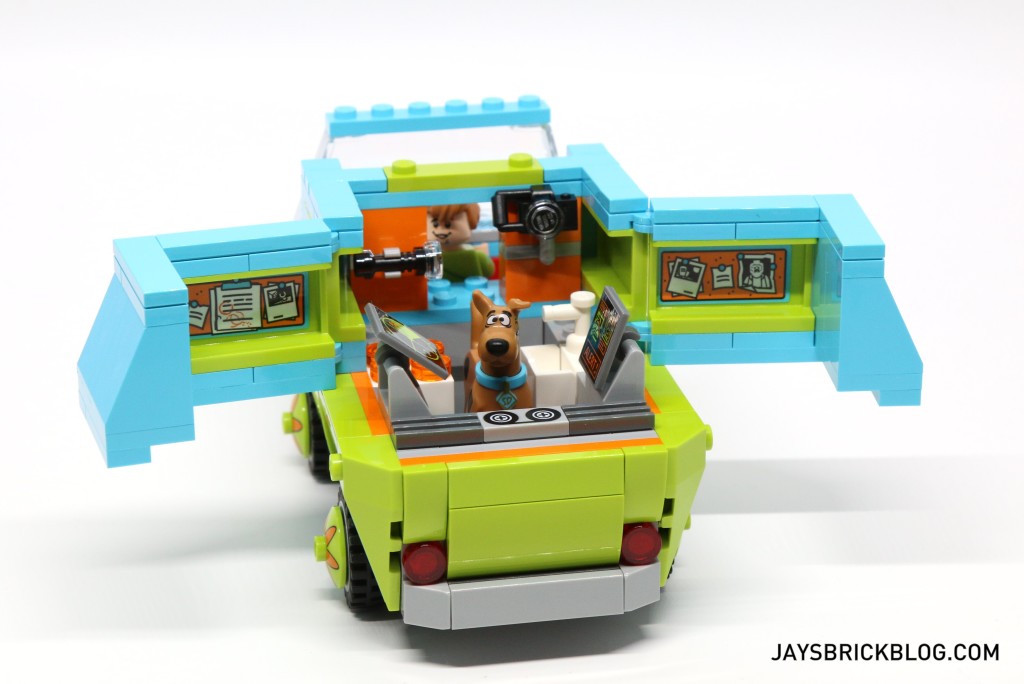 For play features, I was delighted to discover that the back of the Mystery Machine opens up in a very doll-house like manner to reveal a tightly designed interiors with plenty of cool little Easter Eggs. 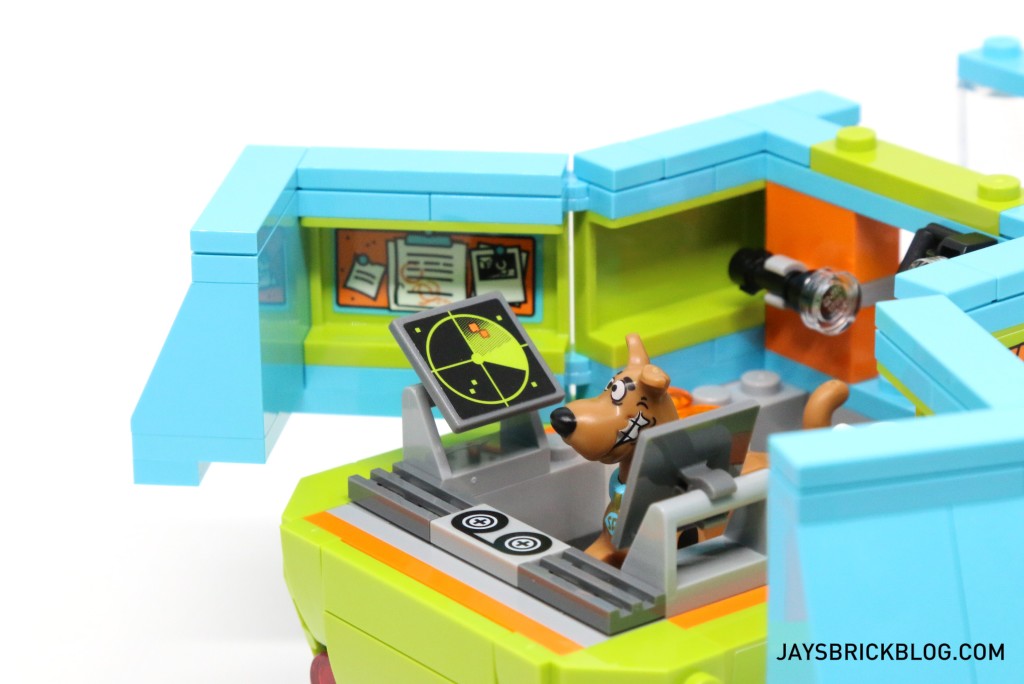 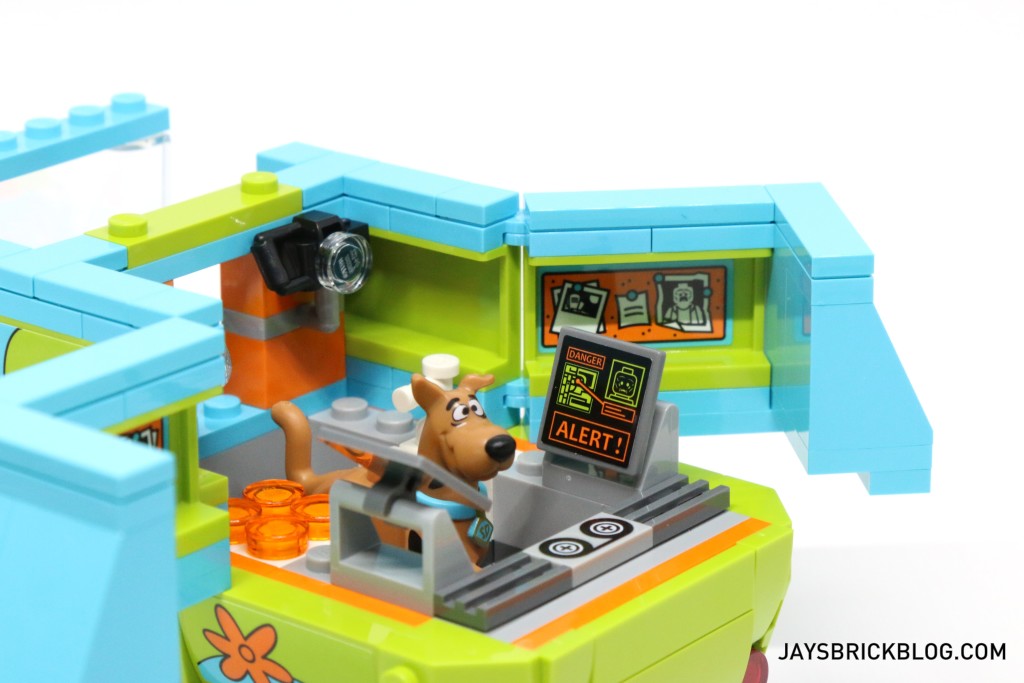 The back of the van while small packs plenty of cool features such as a stove, hooks and clips to store the gang’s mystery-solving equipment and 2 stickered computer screens.

I also really like the cork board stickers on the walls of the van which has clues like photographs and letters. The workspace is really believable as it has mostly everything you need to crack cases.

I don’t know if the Mystery Machine fits in the entire gang as I haven’t got all the Scooby Doo sets just yet, but I’ll be sure to test out if I can fit everyone in. 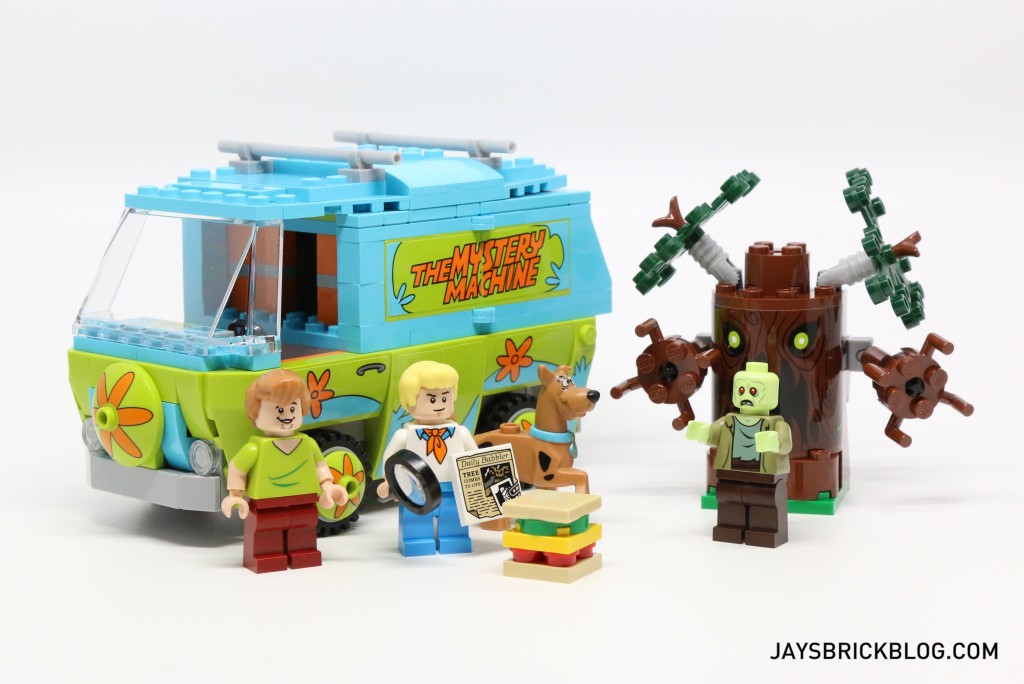 Final thoughts: The Mystery Machine is the perfect introduction to the Scooby Doo theme and one of those rare flawless LEGO sets. The design of the van is simply outstanding, despite it being littered with stickers which I feel are a necessary evil in this case to replicate the Mystery Machine’s appearance in the cartoon.

The van not only looks great from the outside but has a fantastic interior filled with cool little details that fit the overall theme of Scooby Doo.

For a $50 set, getting 3 minifigures and Scooby Doo is yet another win since nearly all of them look great and are collectable. Fred being exclusive to this set is also another huge motivation to not miss out on this set.

The Spooky Tree while looking a little barebones does serve its job of giving the entire set some context and playability. To be honest, even if LEGO completely excluded the Spooky Tree, the Mystery Machine would still be a decent buy.

The number of stickers might be a deterrent for LEGO fans who absolutely detest applying them to sets and when you’re dealing with so many, there risk that you muck some of them up dramatically increases but if you can overcome this minor speedbump, the set is pretty much perfect.

The Mystery Machine is an outstanding set, radiating with the warmth of nostalgia that’s enhanced by its great design and execution. I highly recommend picking this set up if you’re a fan of the Scooby Doo cartoons or if you love LEGO in general.

The Mystery Machine is right up there in the best sets of 2015. Don’t miss out on it.

Thanks for reading! Be sure to check out the Review Hub for more LEGO reviews!