I’ll preface this review with a bit of a confession – I’m not that big of a car enthusiast. Sure, I may enjoy the occasional  Top Gear episode and I drive a decent-ish sporty car (it has a turbocharged engine) and I drool at whatever car James Bond rocks up in but I wouldn’t normally consider myself a car expert.

When LEGO announced 2015’s Speed Champions, I was only mildly excited about the new theme that featured an unprecedented partnership with some of the world’s most desirable carmakers like Ferrari, McLaren and Porsche.

Nevertheless, like with most new LEGO themes, my curiosity was piqued enough to wonder how LEGO would recreate models of some of the world’s most impressive motorsport vehicles.

Not knowing that much about cars and motor racing, I opted for the flashy red Ferrari with an inhumane number of stickers on it. I moderately hate stickers, so I thought it would be pretty ironic to take on the Ferrari 458 Italia GT2 which was smothered by an AFOL’s worst nightmare! 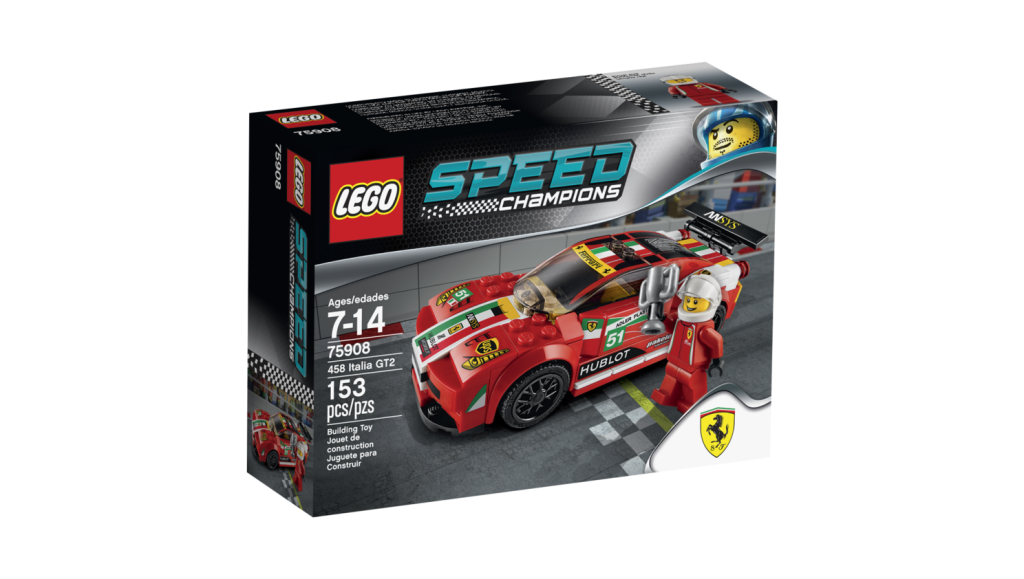 I don’t know much about the Ferrarri 458 Italia GT2 other than the fact that it has won the 24 Hour Le Mans race several times and is an incredible looking four-wheel beast that goes pretty fast. This isn’t LEGO’s first foray into real life supercars, having launched the second wave of Shell F1 polybags last year and further back in history with the Racers theme which featured mostly Ferrari vehicles.

There are 4 small sets within Speed Champions that just feature a car and a driver (full price $19.99 each) which I figured would be a great introduction to the theme and would iultimately determine whether I would bother with the theme at all. At approximately 150 pieces each, they make great impulse purchases and I picked up the whole set of 4 cars a while back when Big W were selling them for $15. 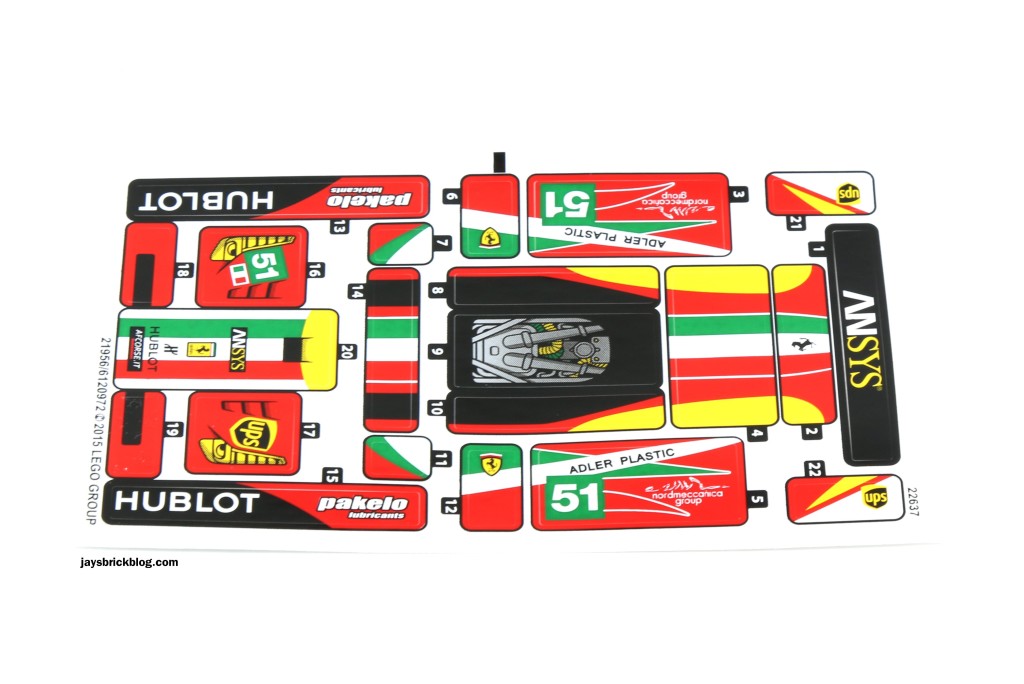 This is the sticker sheet for the Ferrari 458 Italia GT2. There are a disgusting 22 stickers (helpfully numbered) that you’ll have to apply to the model. If you vehemently dislike stickers, I would advise for you to run far far away from this set.

I wouldn’t call myself a sticker advocate but I can definitely see why these stickers are important to the set. Like real race cars who are covered with sponsors, the LEGO Ferrari 458 Italia GT2 stays true to its real life counterpart by incorporating a lot of familiar brands and logos – one of the more unique features of this set. 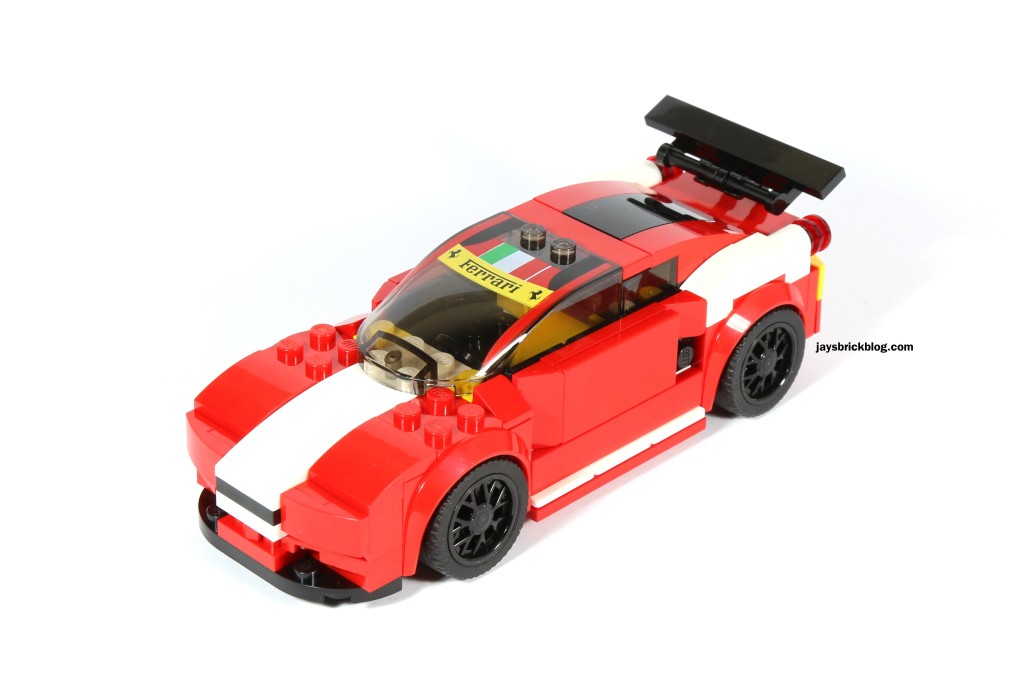 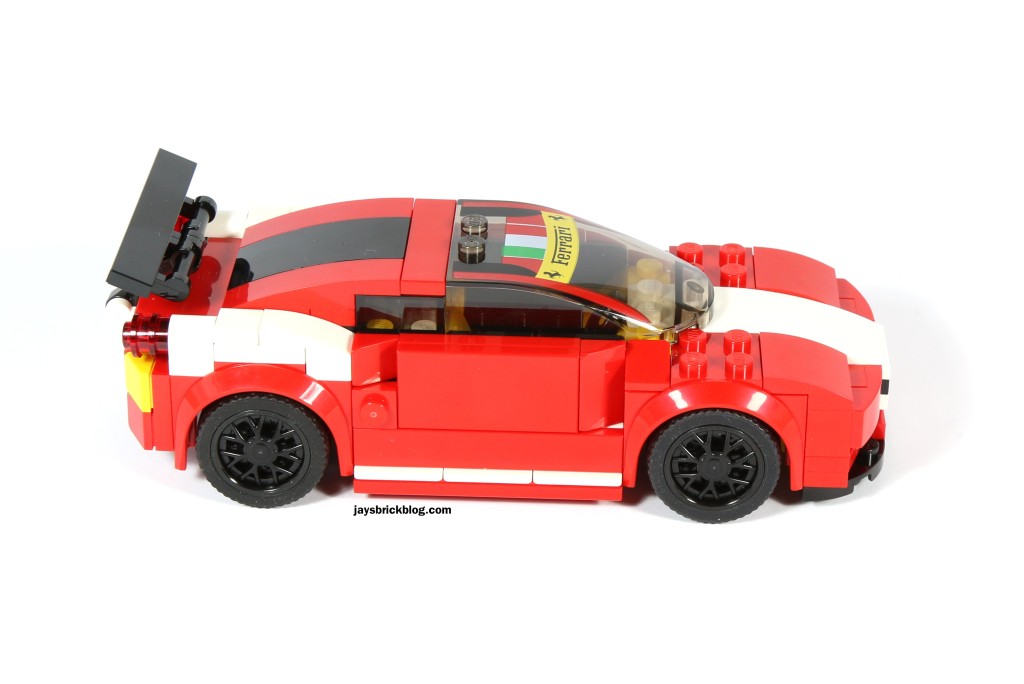 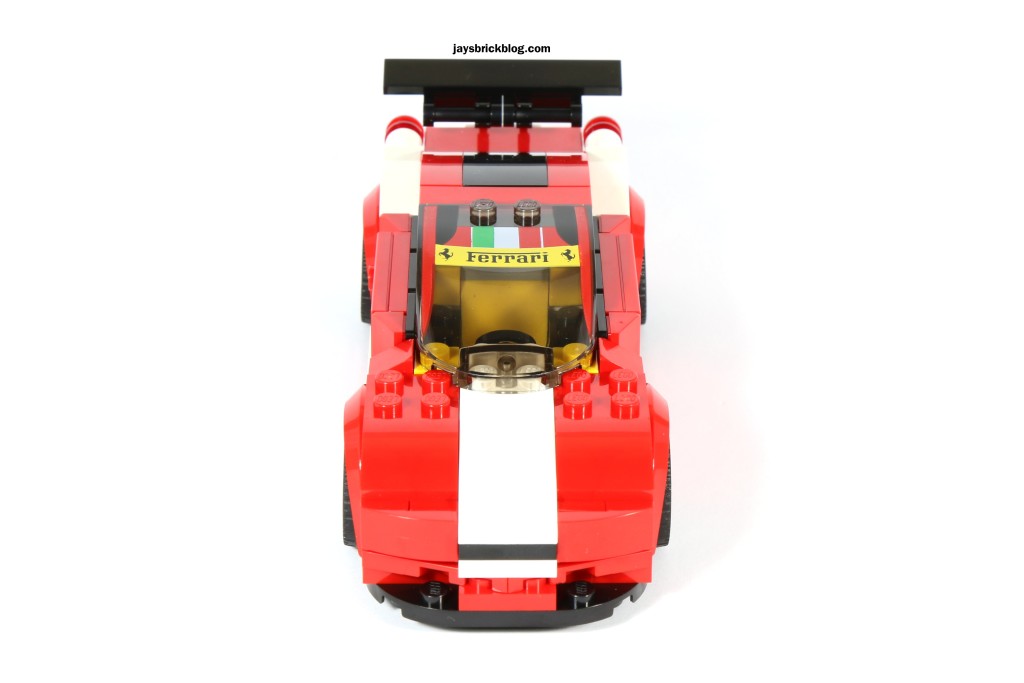 To be honest, it looked very bland and boring without the stickers. You do get a better look at the curves of the car without all the branding and sponsorship clutter, but this is definitely one of those sets where you MUST apply the stickers to get the complete experience. The only printed element is the windscreen which has a slight tint to it as well. 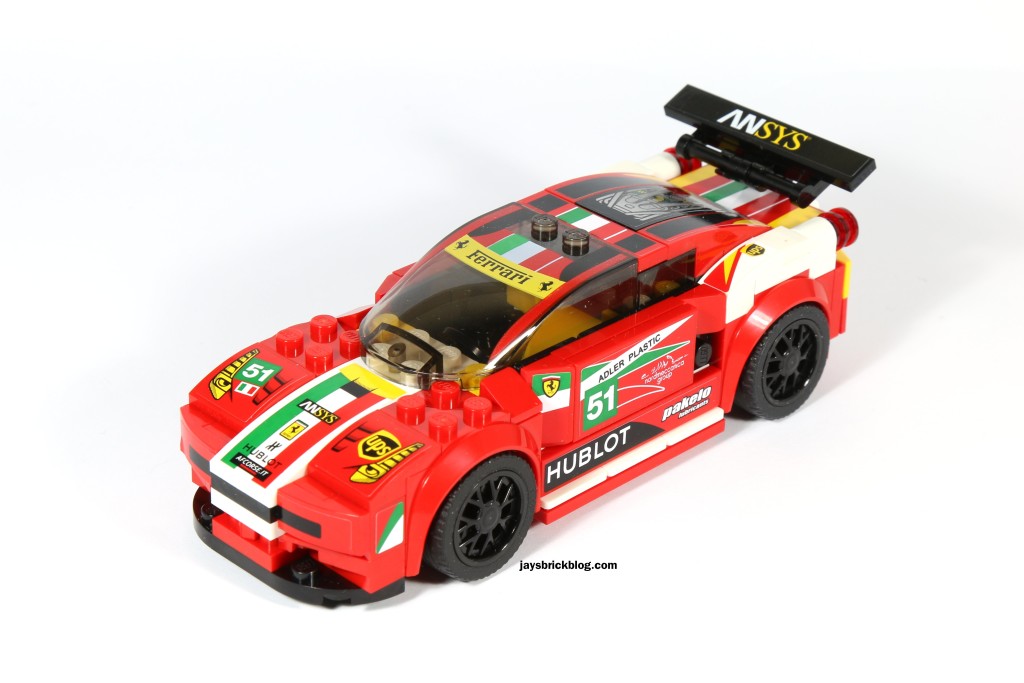 Here’s the completed Ferrari 458 Italia GT2 with all stickers applied. Assembling the car was very straight forward, it took me less than 15 minutes to put it all together. Applying the stickers on the other hand… took me about 20 minutes and I won’t lie – was a giant pain in the ass.

There are only two outcomes when you’re done with the 458 Italia GT2:

a) you will be an expert at applying stickers

b) it will only increase your hate for LEGO stickers 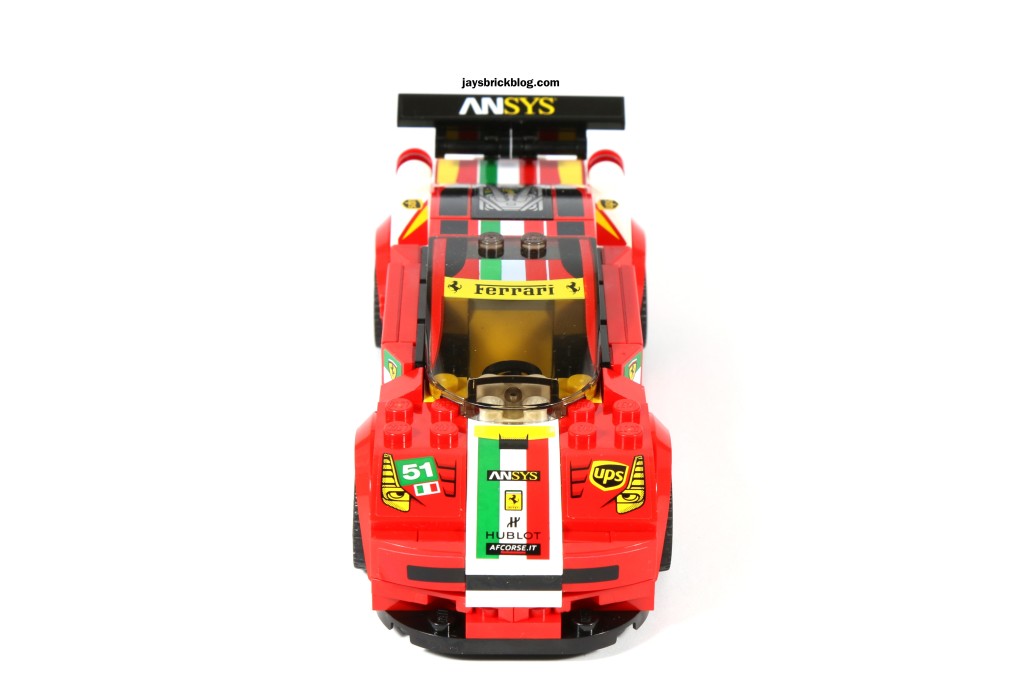 I took more than 20 minutes because I was being as pedantic as possible about applying the stickers properly, making sure that they were straight and applied evenly. I think I did okay.

The end result was quite surprising, I actually liked the model much more than I thought I would. I think the illustration on the box doesn’t do the set justice. The trademark Ferrari red works extremely well, despite being drowned out by sponsor stickers.

With most LEGO themes being rooted in fantasy or fictional universes, I came to really like the set not just because it was based on a real Ferrari car but because it also had brands from real world companies such as Swiss watch company Hublot or logistics company UPS which are massive brands in their own right.

I really liked that these real world brands were captured in LEGO form as it really helped with forming a connection to the Ferrari it was based on. 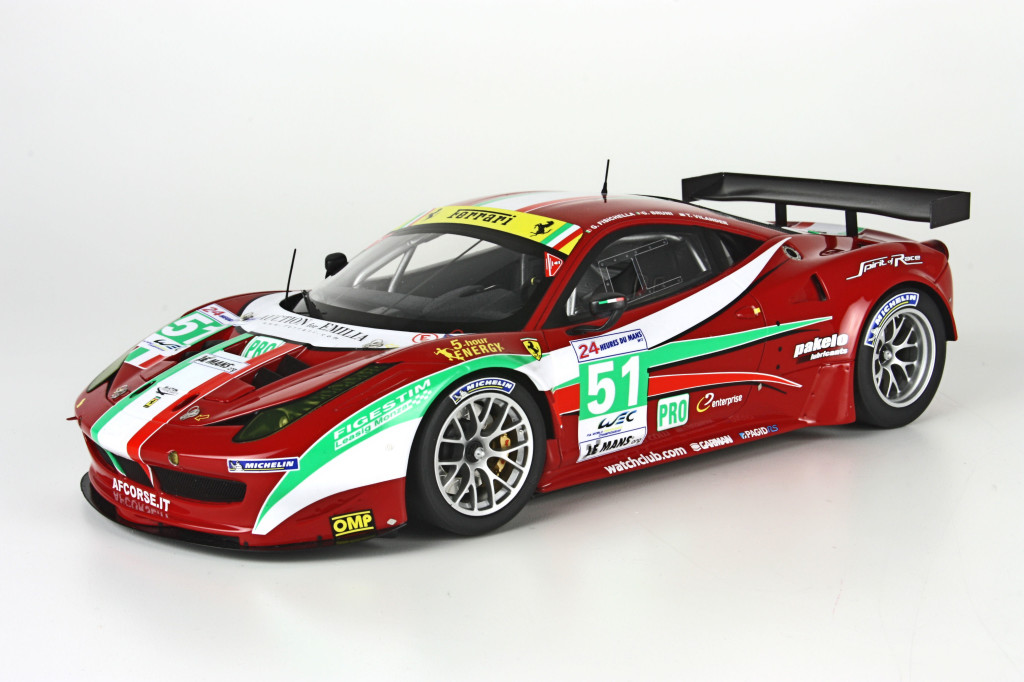 Speaking of real Ferraris, this is what the Ferrari 458 Italia GT2 looks like in the flesh. I think the designers did a fantastic job capturing its distinct look, curves and most of all scale of the real car. 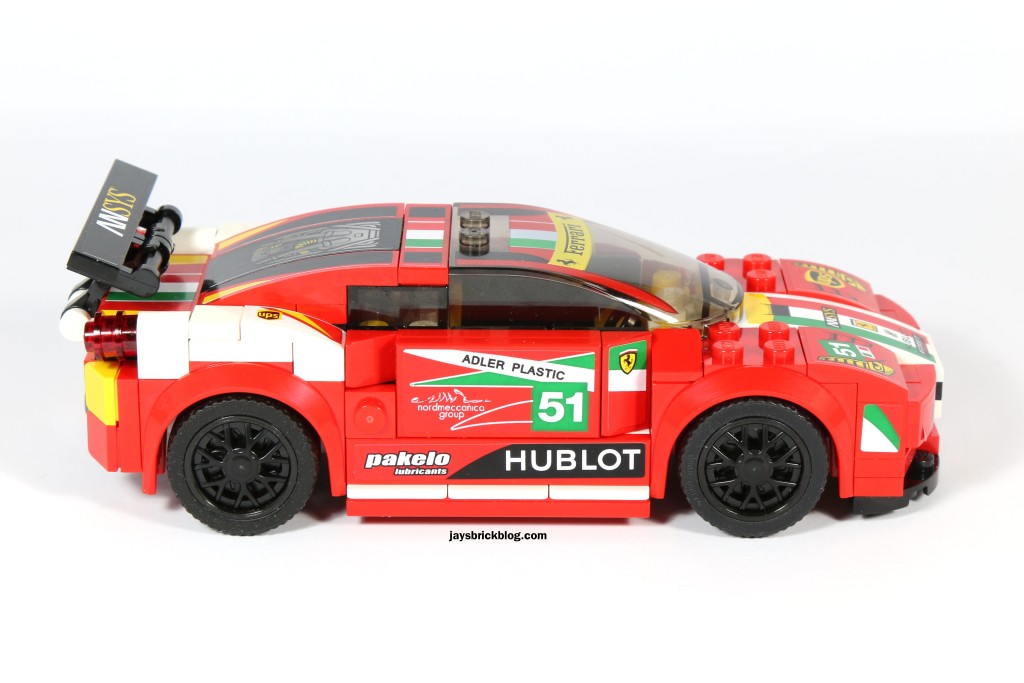 The model is a tad big, especially when you compare it to other City vehicles (it’s almost the same length as 60073 Service Truck) so it might look a little oversized and out of place in a regular LEGO city. I do think its a fair trade-off, especially since sacrificing the curves and details would probably make this an inferior model.

As LEGO vehicles go, one of the most notable enhancements are the new tyres and their changeable rims. They look fantastic, adding a lot of realism to the Ferrari as a whole. I would go as far to say that the tyres are the secret ingredient behind the 458 Italia GT2’s great looks. It just ties all the different parts together in a very believable package. 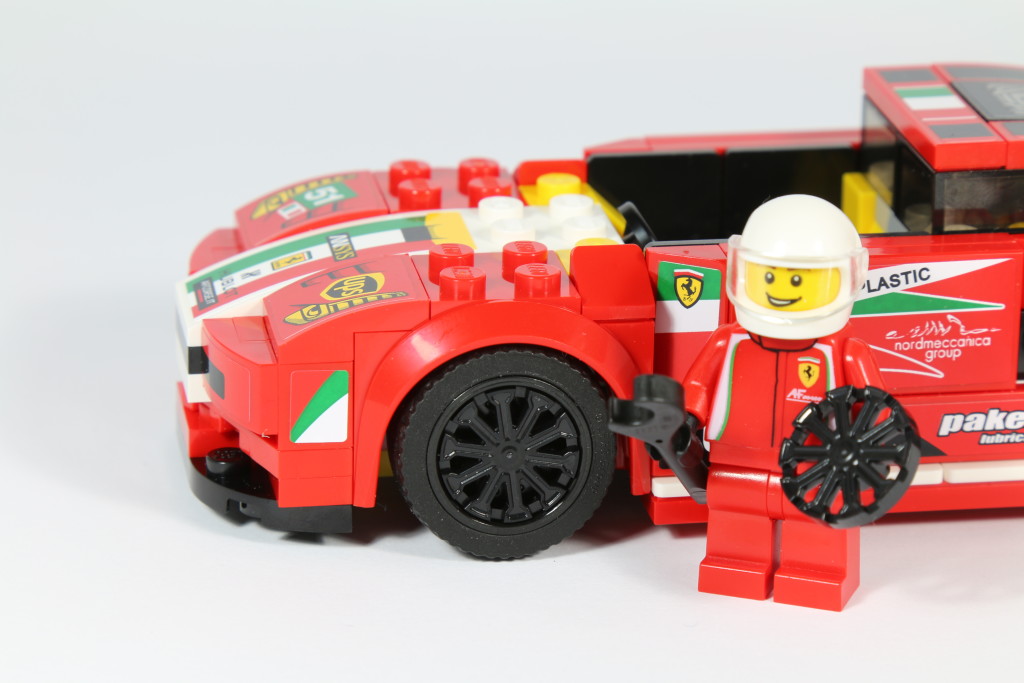 Another awesome thing – you’re given two sets of rims that can be changed. This is the other set, which I didn’t like as much as the ones in the previous images. 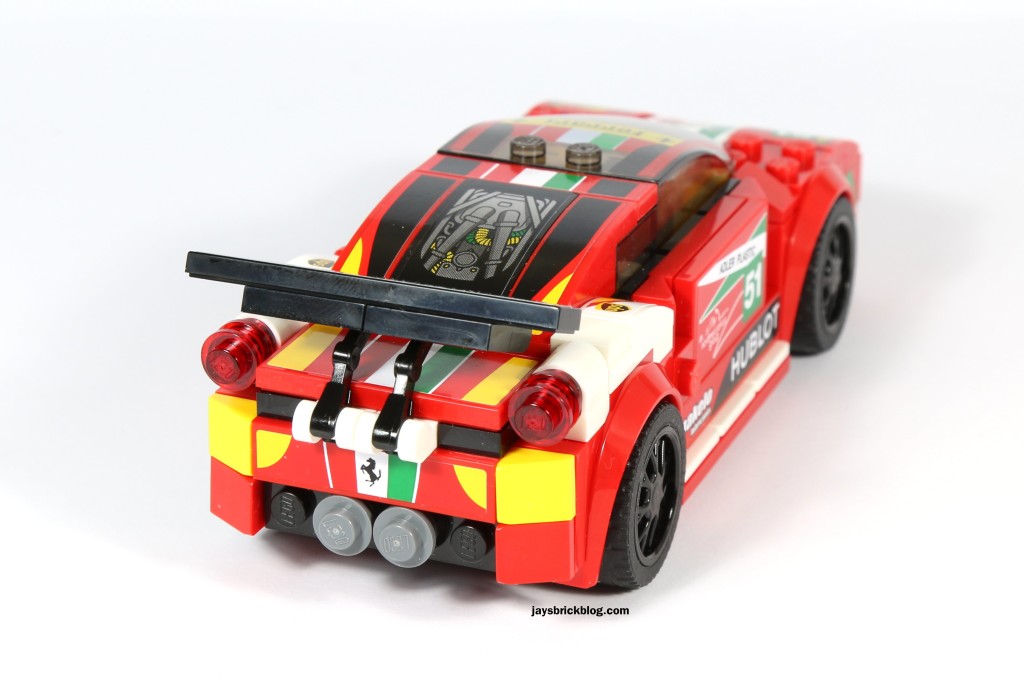 The car looks pretty great from behind as well – I really liked the Ferrari logo right above the two grey studs, which I think are meant to represent its exhaust. 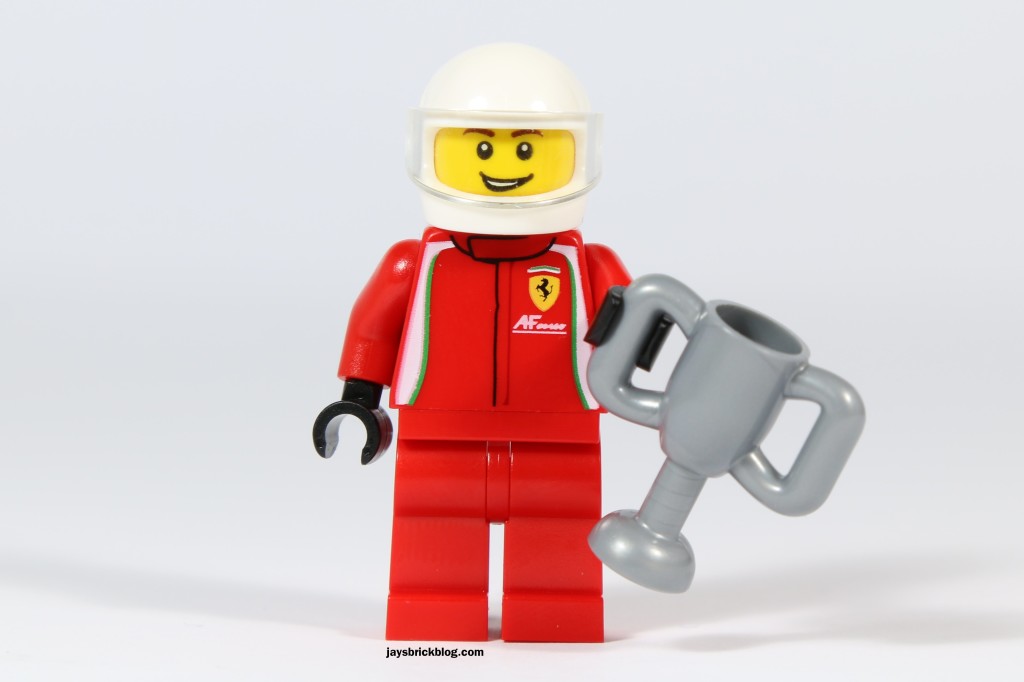 For once, the minifigure isn’t the star of the set. We get a solitary Ferrari driver which comes with a big trophy. Details are strangely scarce on his uniform – I would’ve liked it if they had covered it with sponsors like you’d expect from racecar drivers, but we do get a nice nod to AF Corse, emblazoned on the driver’s breast beneath the iconic Prancing Horse logo. 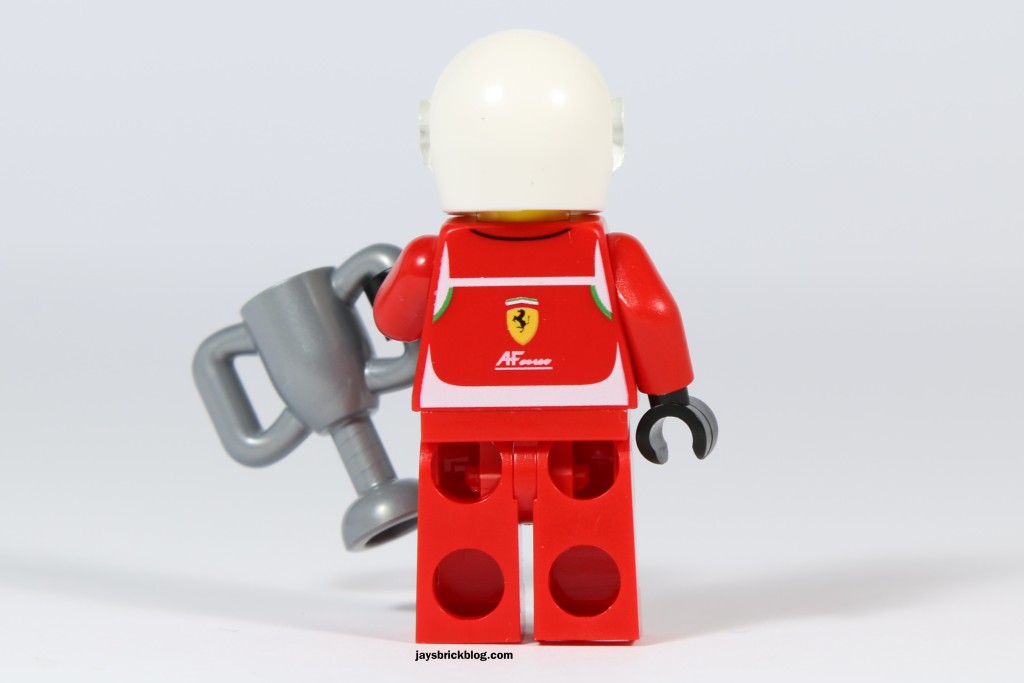 The driver has back printing, with another nod to AF Corse, an Italian auto racing team which competes in the Le Mans Series and other races.

The minifigure is decent and it’s nice to be able to put somebody behind the wheel – a pretty significant play feature that kids would appreciate the most. 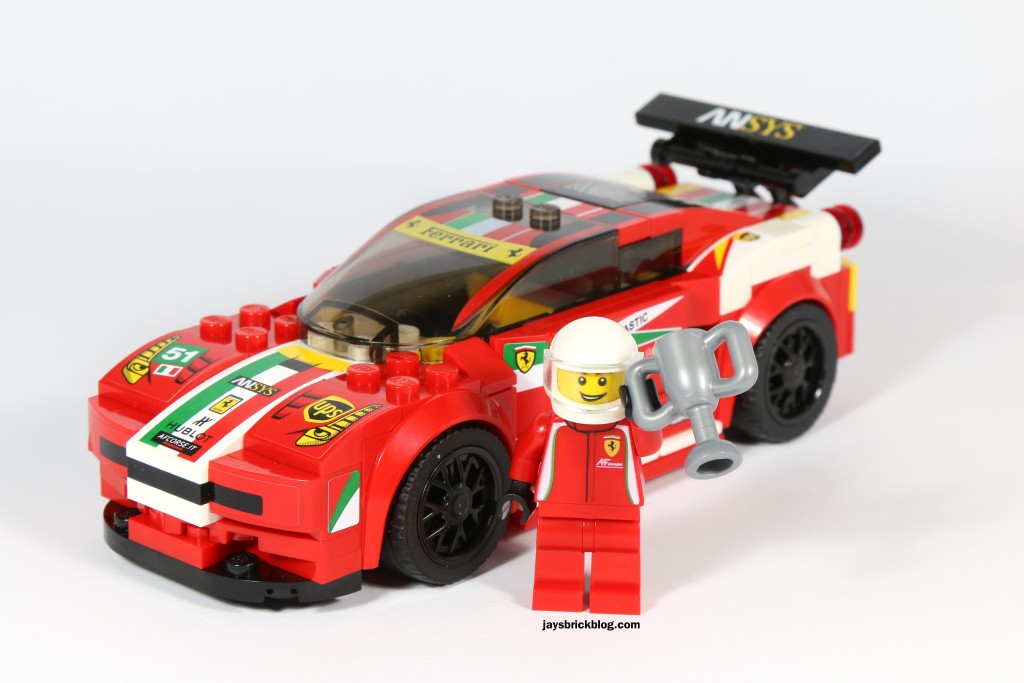 Final thoughts: I think I lucked out by going with the Ferrari 458 Italia GT2 as my introduction into the Speed Champions theme. I enjoyed the build and model much more than I had expected, and immediately returned to Big W the next day to pick up the other 3 small cars while they were still selling for $15.

The model looks fantastic and it was a fun and easy build, apart from the horrifying task of applying twenty two bloody stickers. I will overlook the sticker ordeal, since the finished model looked great and was worth all the hassle. The car feels very solid and is a nice size that’s suitable for display as it looks nothing like other sports cars that LEGO have produced in this size.

Being relatively cheap impulse buys, and possessing the novelty factor that it’s based on a real world car complete with real world sponsor stickers resonated with me quite a bit. Even now, weeks after I put it together, I still find myself admiring it on my shelf and I’m not itching to build the other 3 small cars.

If you’re an auto-head and/or a Ferrari fan, this set and the Speed Champions theme is probably a godsend. If you’re a casual motoring enthusiast like me, there’s still a lot to like with this LEGO model and is a worthy addition to any LEGO City (despite its larger than usual scale) needing a little bit of motoring flair.

« I’m back from Japan!
Celebrate LEGO and Star Wars Day this weekend at Westfield Southland, Melbourne »