As a man with a fairly empowered “inner child”, there’s nothing I love more than adding dinosaurs to my LEGO collection. 2012’s excellent Dino theme felt like the closest we’d ever get to official Jurassic Park LEGO sets – till 2015 came about.

With Jurassic World premiering in cinemas this week (11th of June in Australia), I am more than excited to jump into the world of dinosaur amusement parks and review a bunch of LEGO Jurassic World sets! The first of which is 75917 Raptor Rampage! 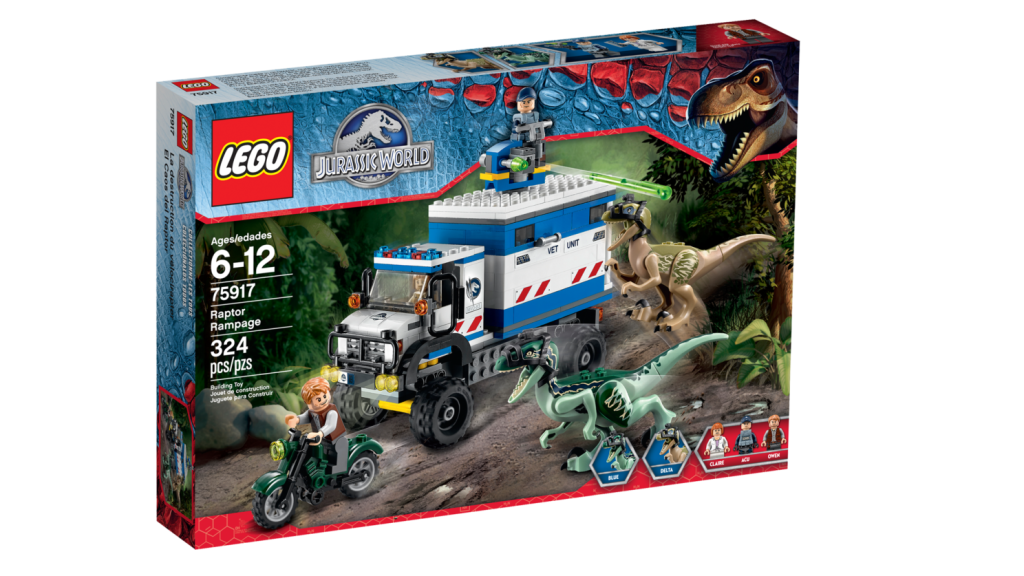 Let me preface this review by stating that I am a HUGE fan of Jurassic Park. Growing up, I was enchanted by the larger than life dinosaurs brought to life by Steven Spielberg on the silver screen. As I grew older and developed a taste for movies, I learned how to appreciate the movie magic and all the campy elements of the trilogy and regularly rewatch the movies when I can.

I’m all set to catch Jurassic World in the cinemas (I’ve got my IMAX tickets booked) and very pumped to watch Chris Pratt (oh, so dreamy) in action alongside his Velociraptor buddies! Let’s see how his minifigure counterpart stacks up in the only set that features his on-screen character Owen. 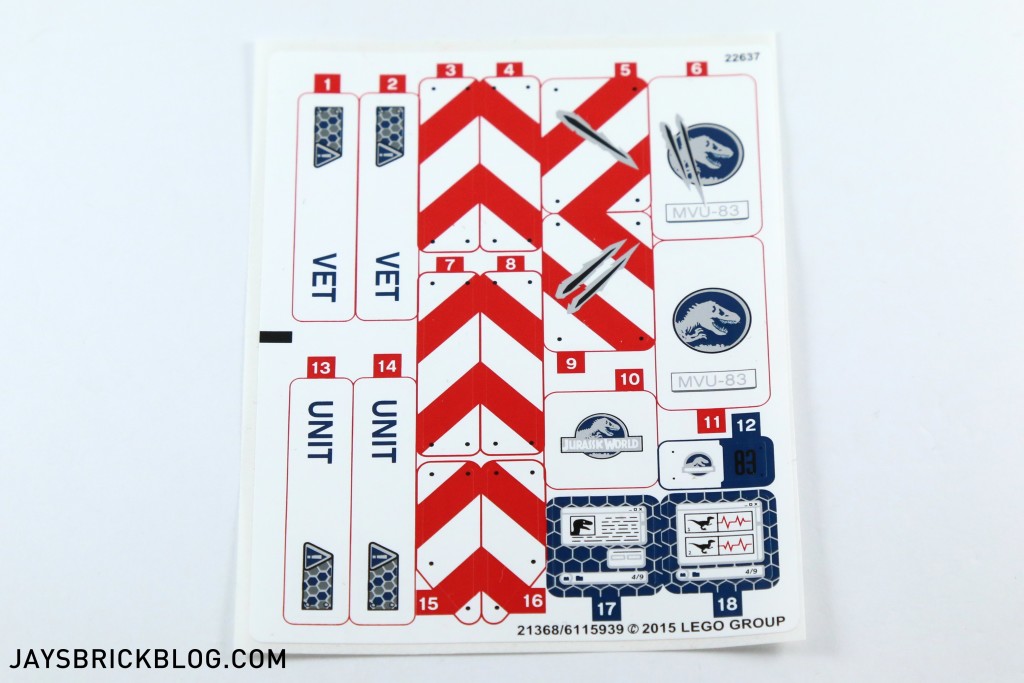 To kick things off, here’s a look at the sticker sheet for the set. There’s 18 stickers in all – a very large number of stickers (18 in all) which might piss off purist LEGO fans but they’re all fairly large and relatively easy to apply.

I’m not a fan of stickers but I’ll pass on making any snide remarks purely because of the Jurassic World logos on them. Unfortunately, the stickers are opaque and not the transparent-decal type that I prefer. 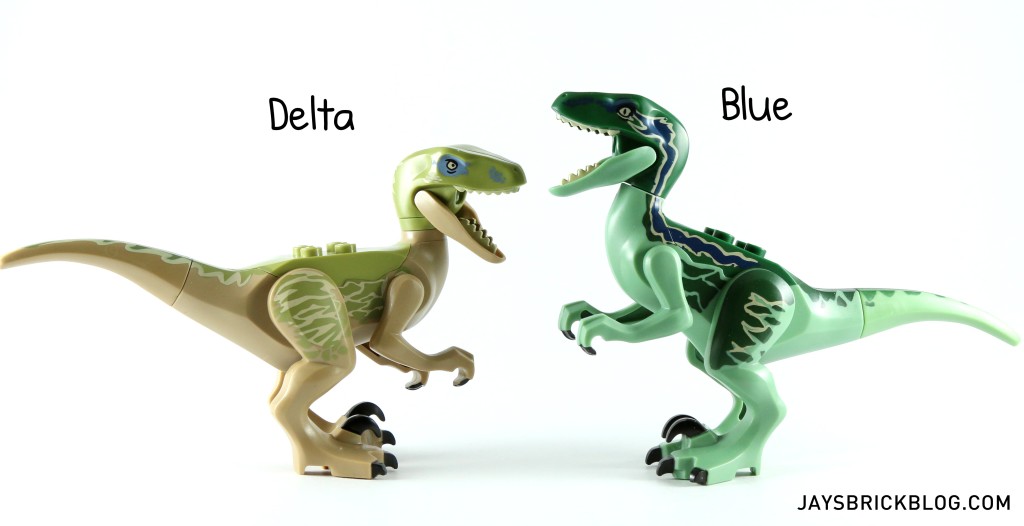 The earthy green raptor is named Delta and the teal-ish green one is called Blue. Great names for Owen’s raptor-buddies. 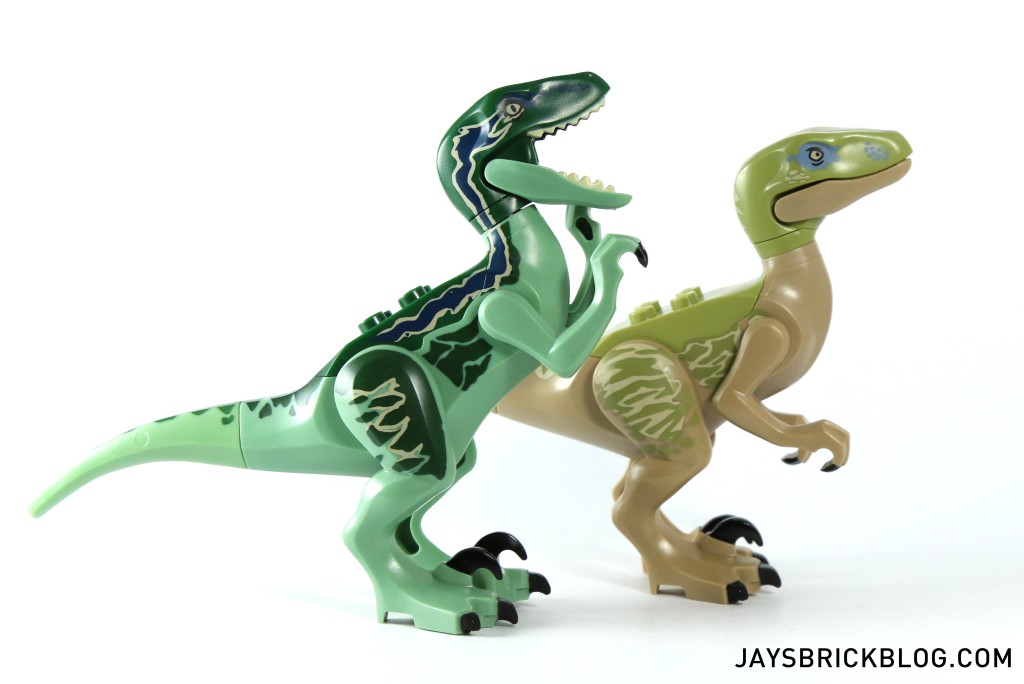 The raptors are of exceptional quality with exquisite moulding and printing on their bodies. I’m pretty sure that they’re almost identical to the raptors in 2012’s Dino theme, just with a more elaborate paintjob and slightly different lower jaws.

They can be posed in many different positions and their jaws can snap open and close, although it’s quite hard to get them to chomp on minifigs. 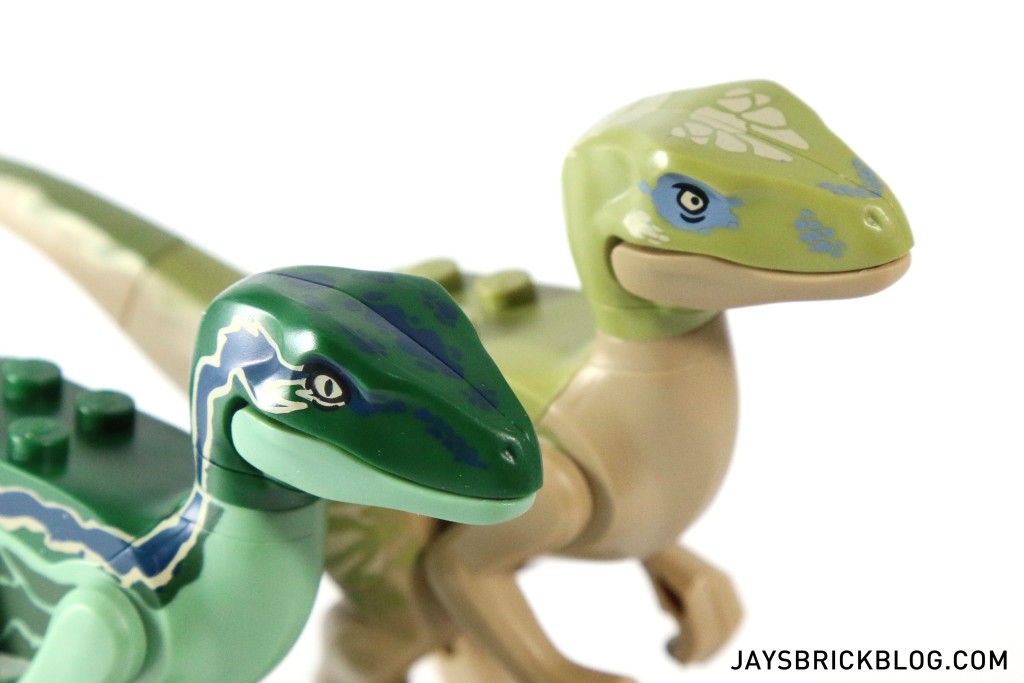 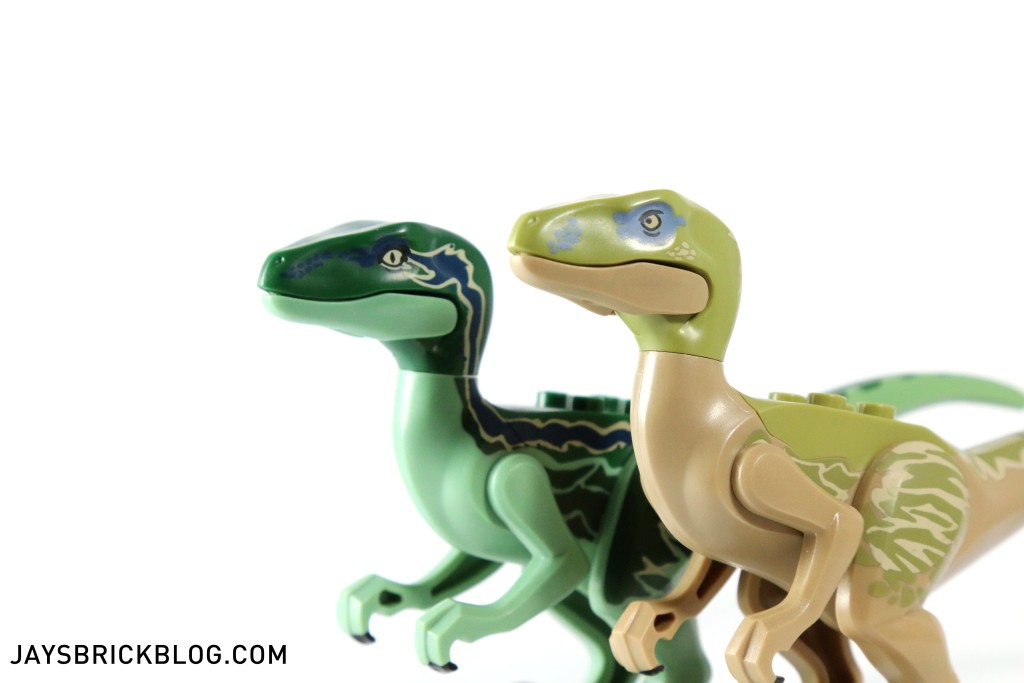 Here’s a closer look at the details etched into the Velociraptors. There’s no beating around the bush, the Jurassic World LEGO sets are all about the dinosaurs, and the 2 raptors are fantastic additions to any LEGO dinosaur aficionados’ collection.

Each Velociraptor comes with some fancy black headgear which look like a cross between a harness and a muzzle. The headgear clips on easily to the raptors head and allow for uninhibited jaw movement.

Curiously, there is what looks like a camera mounted on each headgear piece. Guess I’ll find out in a few days when I watch Jurassic World if it’s a Dino-compatible GoPro or some sort of mind control device. Or mini laser cannons. Never rule out lasers! 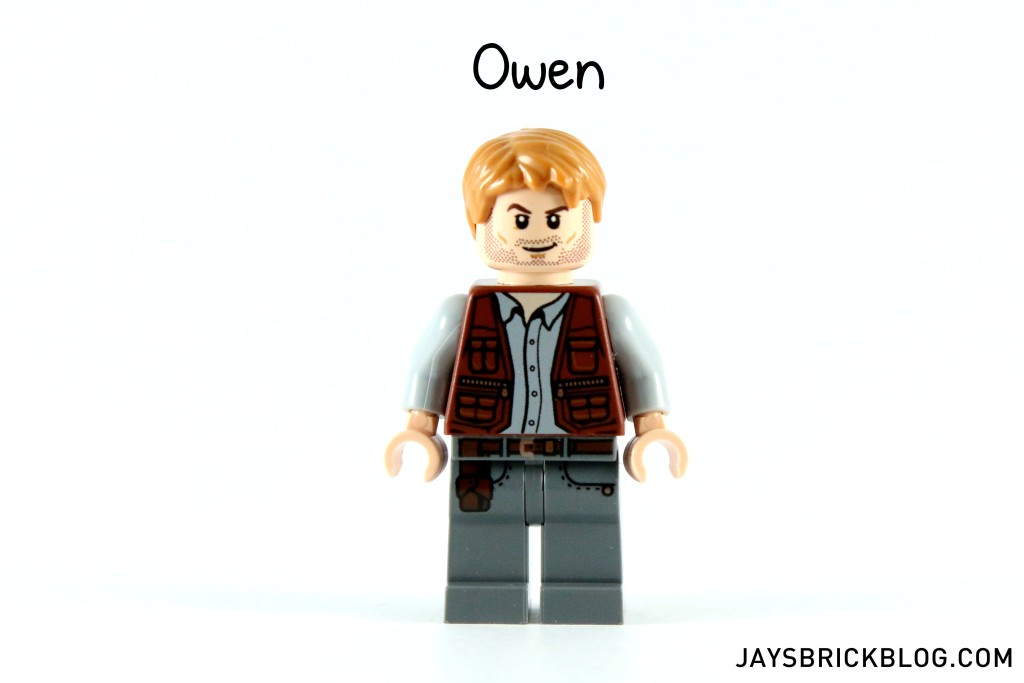 There are 3 minifigures included in Raptor Rampage, all of which are exclusive to this set. Owen Grady, a dinosaur researcher played by Chris Pratt is the first we’ll take a closer look at. Despite being the main character, I find it extremely puzzling that LEGO only included him in one set.

Speaking of exclusive minifigures, I believe that there are no duplicate minifigs throughout the theme which is quite weird as LEGO usually likes to include multiples of the main character in sets – like Indiana Jones, Tonto/Lone Ranger, Iron Man, Spider-Man and Jack Sparrow.

If you want the 3rd Christ Pratt minifigure and star of the movie, you’re going to have to get this set no matter what. Owen’s minifigure has a very classic rugged outdoor scientist look down pat with his brown vargo vest and sensible grey pants. Yes, he does look a lot like StarLord from Guardians of the Galaxy. 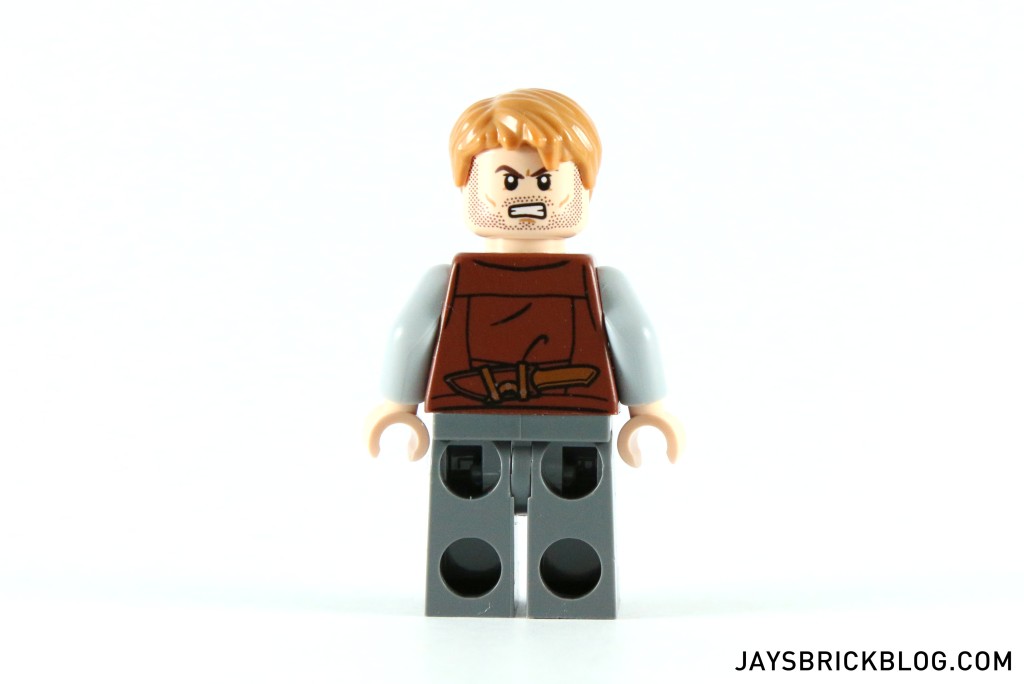 I really love Owen’s back torso print, which reveals a pretty large sheathed dagger. It shouldn’t be a surprise, but Owen has an alternate angry/combat face. Owen’s minifig is pretty cool, although it’s quite a shame that it’s gated behind quite a pricey set. He absolutely nails the rugged scientist look – slap a brown fedora on him and he could pull off a very convincing Indiana Jones. 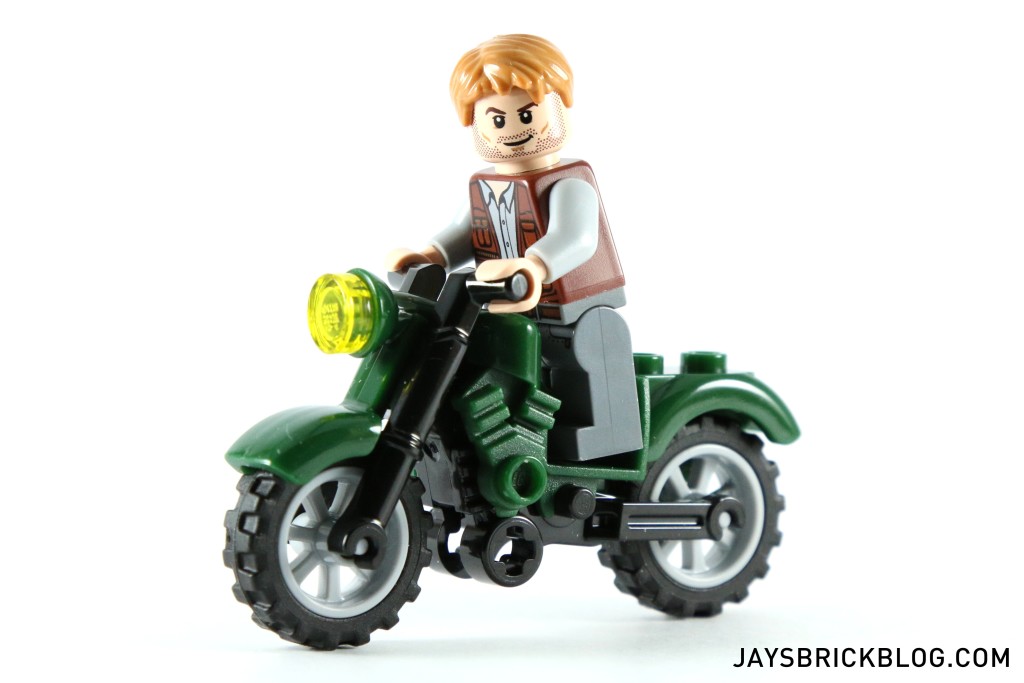 What’s a rugged Hollywood lead without a sexy ride? 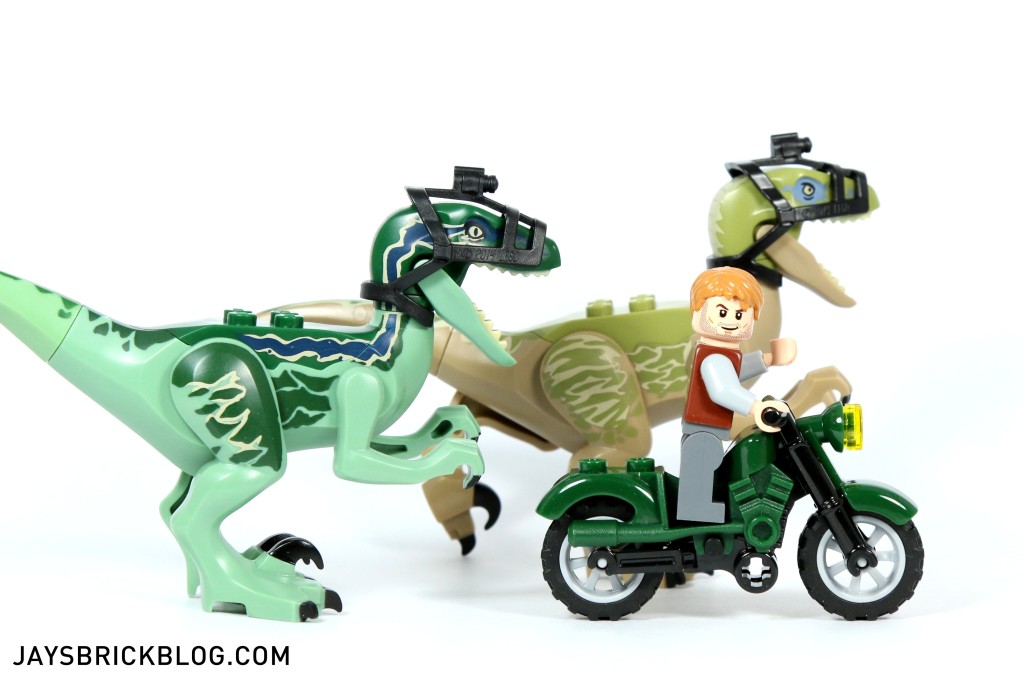 Owen’s steed is a very classy looking dark green dirt bike which he probably uses when he goes riding with his raptor mates. 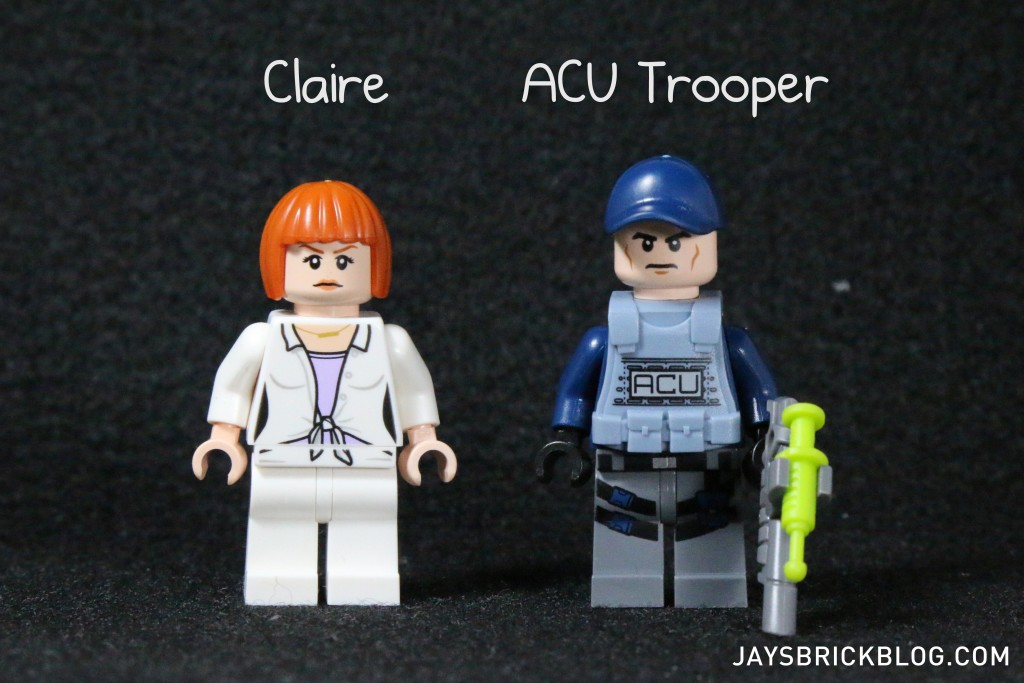 The other two supporting characters included in this set are Claire Greading, played by Bryce Dallas Howard and a nameless ACU Trooper. Claire is the Park Operations Manager of Jurassic World and is probably to blame for the mayhem unleashed upon park visitors in the movie.

From the trailers, Claire seems to be a non-nonsense stone cold lady which is reflected quite well in her minifig as her default facial expression is unimpressed to say the least. She’s got a very clinical and professional all-white outfit on top of a pale purple inner-shirt.

I’m not a fan of her torso details being abruptly cut off. I feel that the designers should’ve just slightly adjusted the printing so that her bow ends before her legs to give it a cleaner look. I do love her orange hairpiece – I’m pretty sure it’s never been available in this shade of orange before. The designers have done a superb job translating Bryce Dallas Howard’s look into LEGO – more strong female characters are always a great thing.

The ACU Trooper has a navy blue baseball cap and gorgeous printed body armour which frankly won’t do much against the dinosaurs in the park. For weaponry, he has a rifle armed with a green tranquilizer syringe to sedate any unruly dinos. 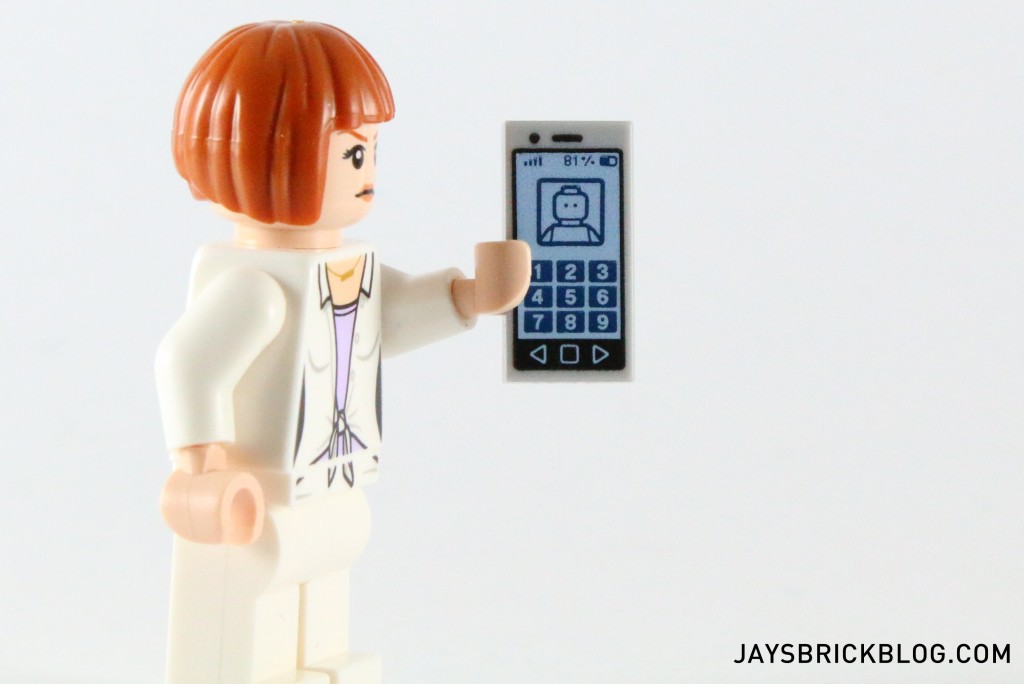 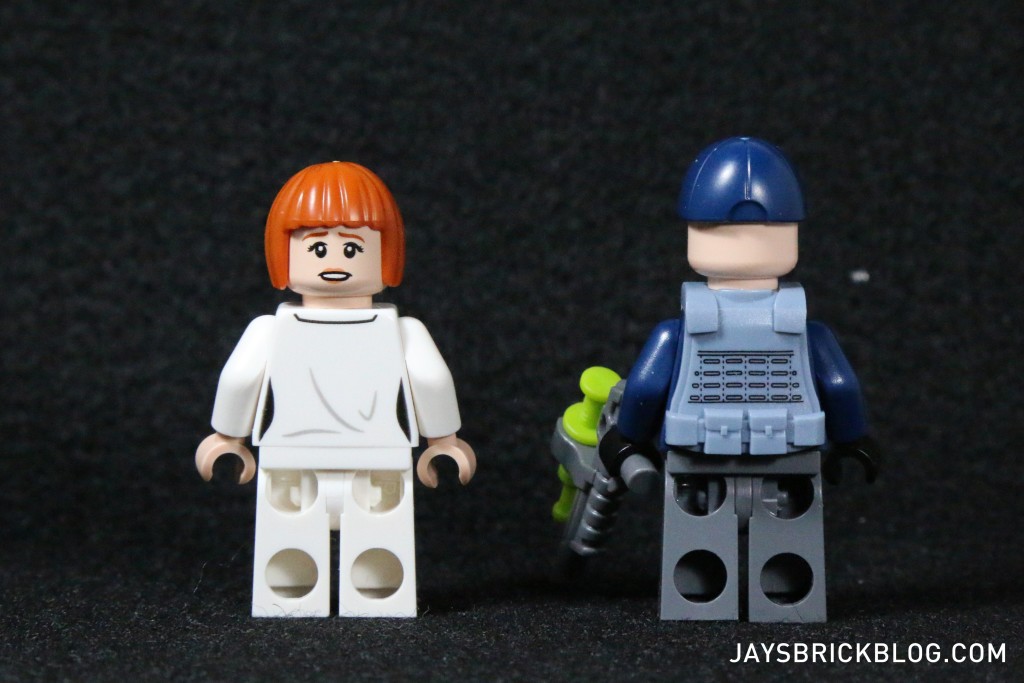 Both Claire and the ACU have back printing and the ACU Trooper doesn’t have an alternate face. Claire’s alternate face has a strange expression that I can only describe as mix between of being confused and aghast.

Special mention has to be made for the back printing on the ACU Trooper’s body armour – totally unnecessary but a totally sweet bit of detail. 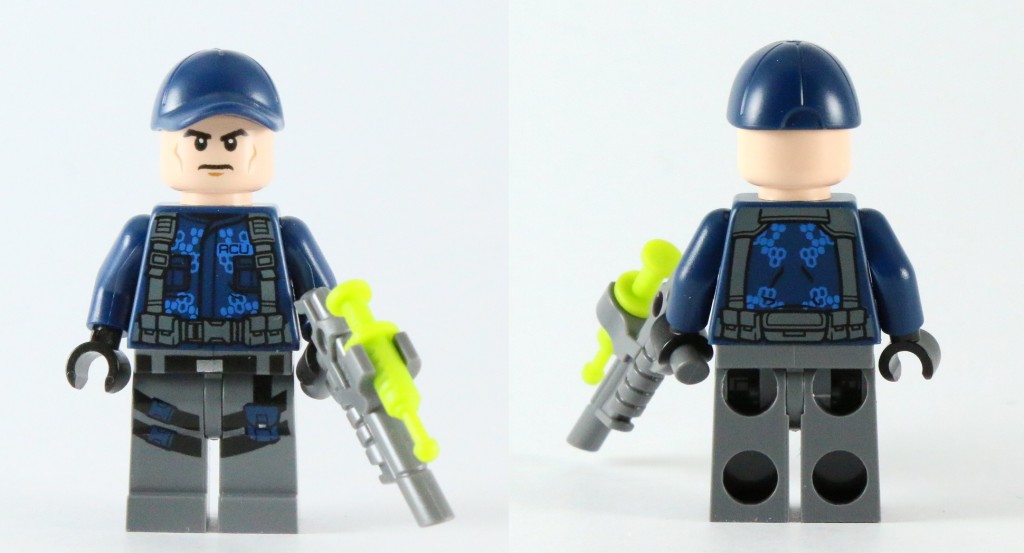 Here’s the ACU Trooper without his armour on. His torso and leg printing made my jaw drop. The electric blue hexagon pattern gives off a really cool futuristic sci-fi vibe to it. It’s a really versatile body and can be seamlessly incorporated into any action-themed MOCs. Anonymous ACU Trooper may not be named but more than holds his own against the likes of Claire and Owen. 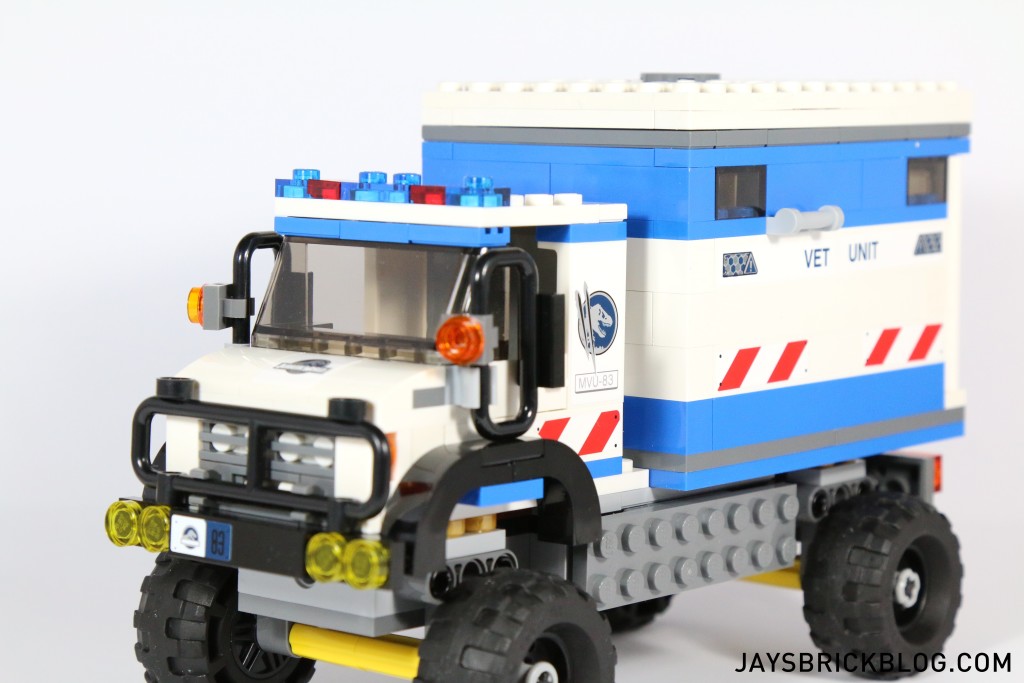 This is the main build, the Mobile Vet Unit aka giant white and blue truck. I’m making assumptions before watching the movie, but it feels like a major plot point will somehow involve Claire and Owen being despatched into the park to nurse some sick/injured dinosaurs before they’re attacked by raptors, which Chris Pratt then bewitches with his charm and wit.

The Mobile Vet Unit is what it is, an oversized truck. As trucks go, there’s not too much that sets it apart. I understand that the LEGO designers were probably constrained by the source material, but the blue and white colour scheme makes the Mobile Vet Unit look a little adolescent. I do wish that they’d use a darker shade of blue as the primary colour. 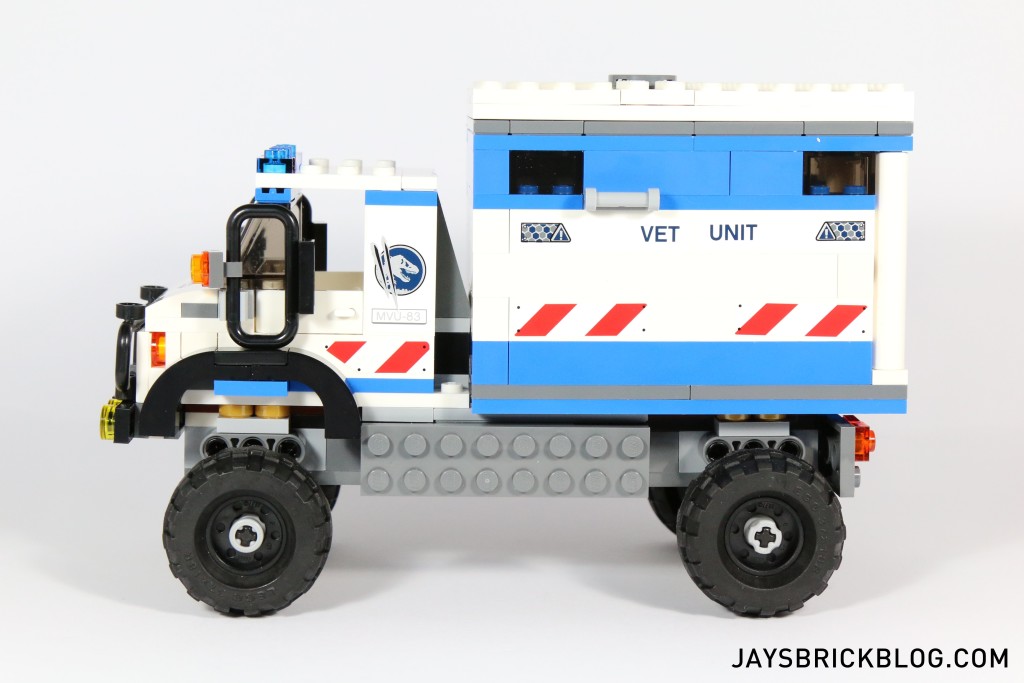 Here’s a look at the Mobile Vet Unit from the side. The high number of stickers starts to feel more justified as it does a decent job breaking up the monotony of the white and blue bricks. 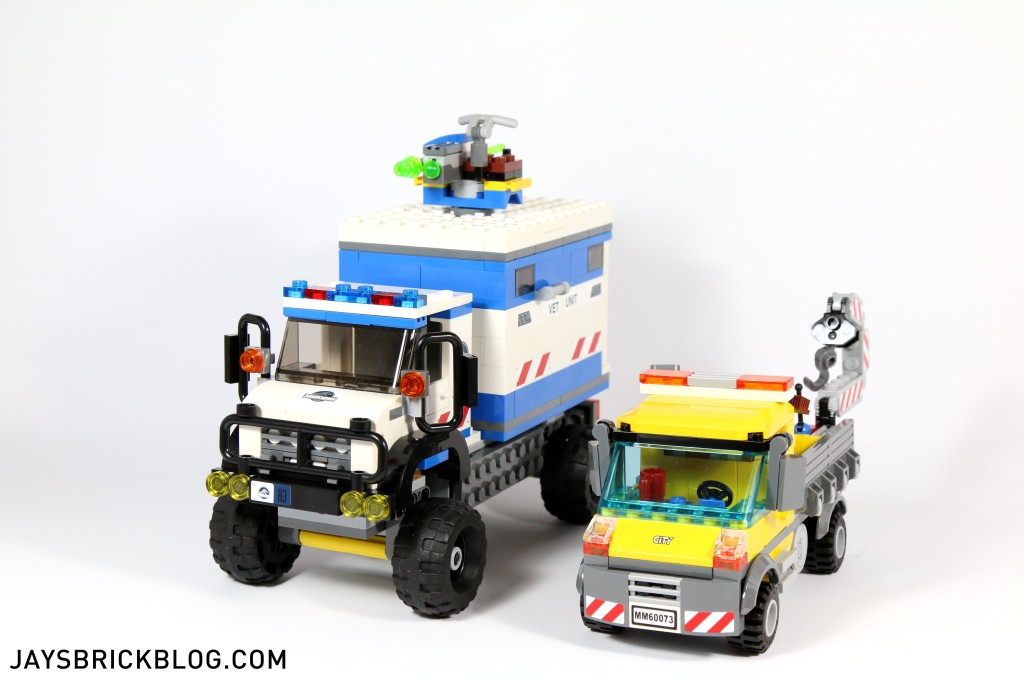 Here’s a comparison with a regular LEGO City Vehicle (60073 City Service Truck) to give you a visual idea of how chunky it is.

You can also see the rotating rooftop shooter which is perched on the roof of the Mobile Vet Unit. It has a spring loaded shooter (and an ornamental flick fire missile) to take on larger dinos and can swivel around 360°. 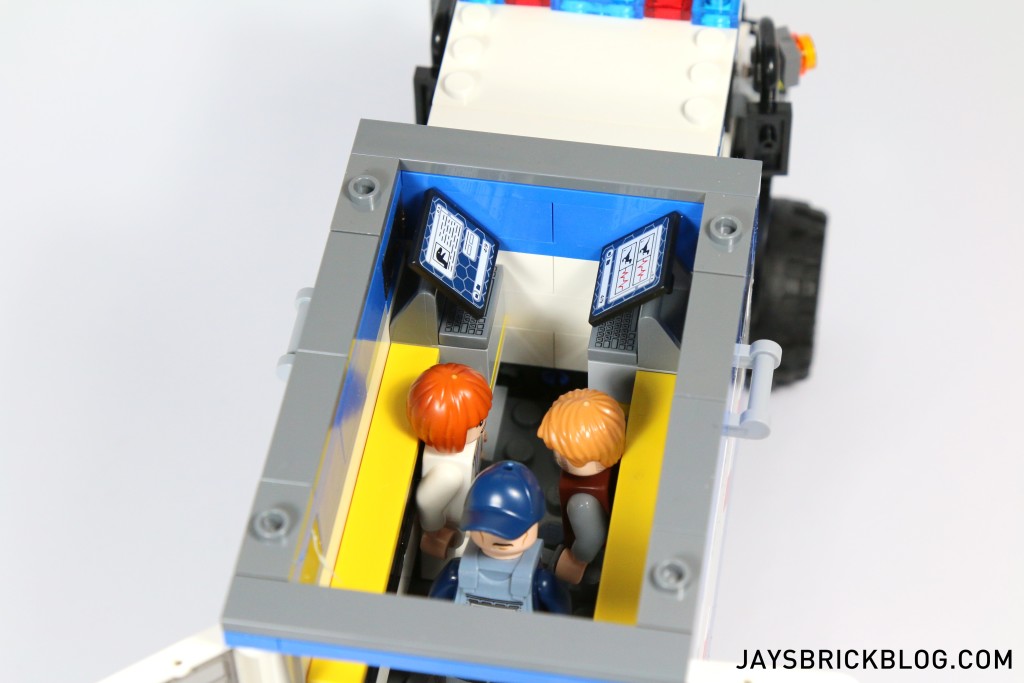 The interior of the truck is adequately spacious – it can fit all 3 of the set’s minifigures with enough room that no one’s personal space is being invaded. Other than that it’s quite bare (by design, more on that later) and houses two computer consoles with stickered monitors containing information on both Velociraptors.

The computers are nice additions but there’s one glaring flaw – they’re way too high to be accessed by the minifigures! The bare interior is a little disappointing. I’d have expected more equipment or even some medicine in the truck – instead, it has more firepower than veterinary supplies. The Jurassic World park operators sure have their priorities in order! 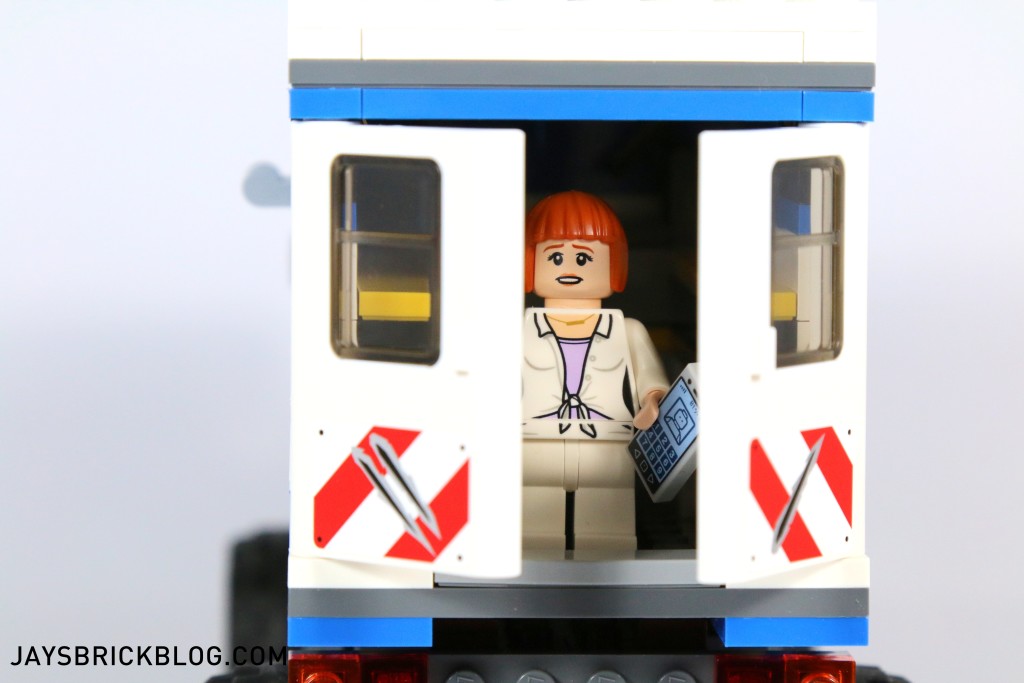 The back of the truck opens up and also has stickers with raptor claw marks on it, which probably means that it eventually comes under attack. 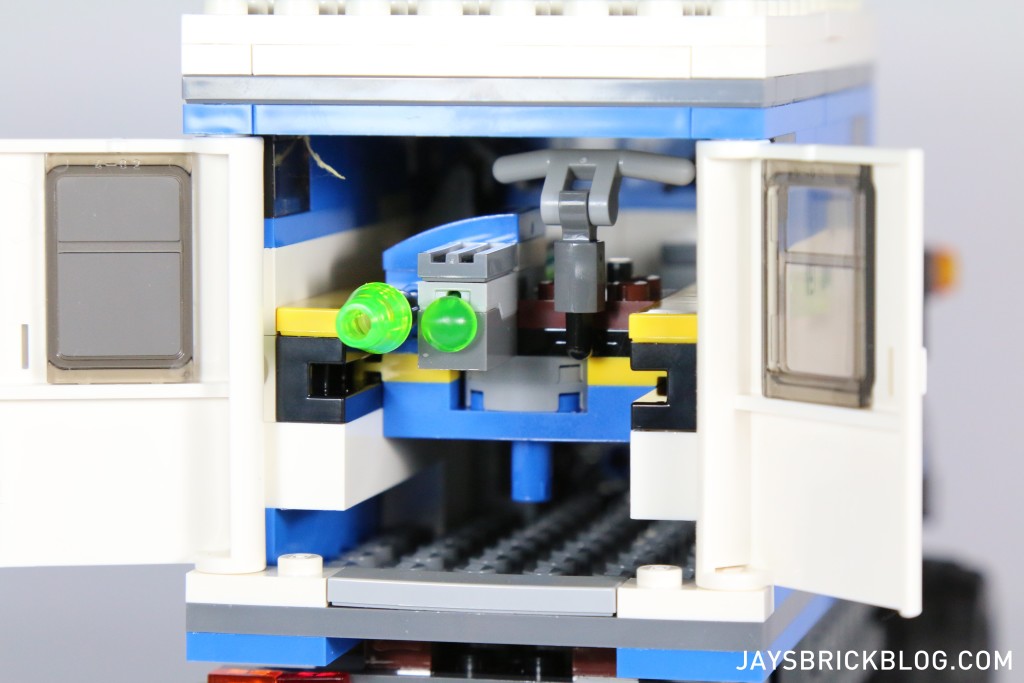 All the space in the back of the truck is to allow the rotating roof shooter to snugly slot itself into the truck. Forget what I said about there being no medicine in the Mobile Vet Unit – I’m just going to pretend that the giant translucent green missile is actually a giant medicinal syringe packed with all the essential dino vitamins and nutrients. Yup. 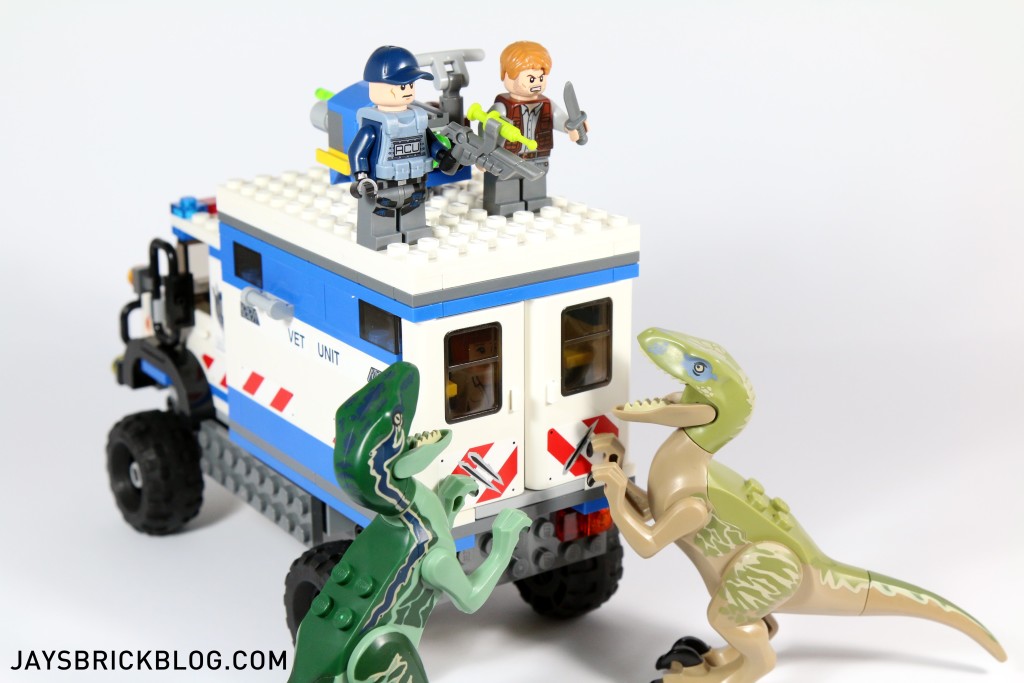 Here’s Owen and the ACU Trooper fending off the eager Velociraptors from tearing the Mobile Vet Unit apart while Claire watches from the inside. These Raptors are really dying to get their talons on some dino-meds! 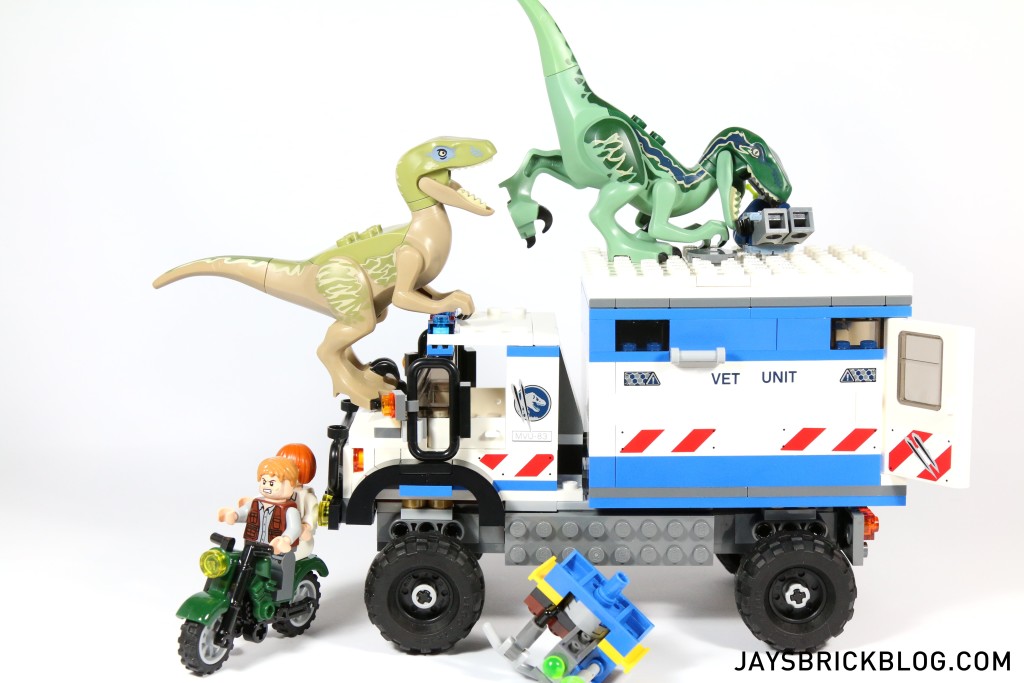 Looks like the ACU Trooper had to take one for the team as the Raptors overpower the truck while Claire and Owen ride off into the sunset. This is what happens when you don’t practice proper Raptor safety! 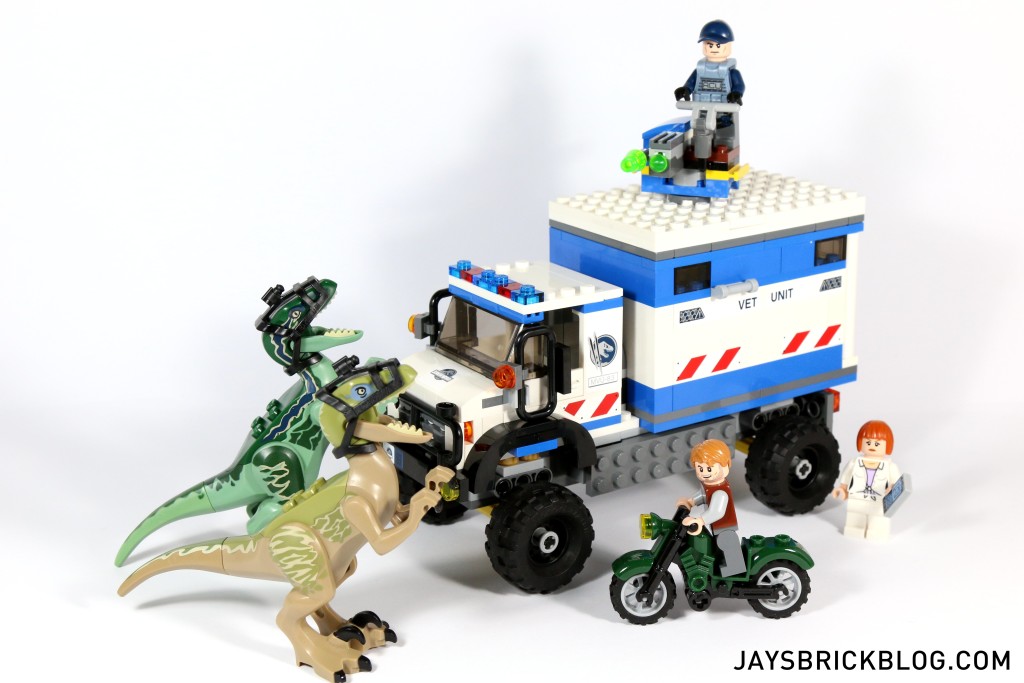 Final thoughts: I can’t share my thoughts on this set without starting off with its ridiculous pricetag. An AU$80 set that contains only 324 pieces is awful value and there’s no way to sugarcoat that fact, even when you take the two awesome Velociraptors and 3 above average minifigures into consideration.

It would’ve been naive to not expect a bump in the sticker price because of the dinosaurs included but $80 is just a little too high in my books. Even if you get this set during a 20% off sale, it’s still a hefty price to pay for what you eventually get.

Being a big fan of the Jurassic Park universe and films, I did manage to personally justify the purchase since I wanted the minifigs and 2 Raptors but even then, it didn’t sit too well with me. I also have a modest LEGO dinosaur collection, so I couldn’t afford to pass up on Blue and Delta.

The truck is underwhelming itself, mostly due to its plain colour scheme. Blue and white LEGO vehicles somehow always remind me of City Police sets, and all the stickers in the world won’t be able to shake that image in my eyes. The only redeeming quality of the set are the Velociraptors and 3 minifigures, the rest is just overpriced fluff.

I have to say that I’m quite on the fence about this set. If you’re not a fan of LEGO Dinos or Jurassic World, give this set a miss unless you come across it going on clearance for 50% off. 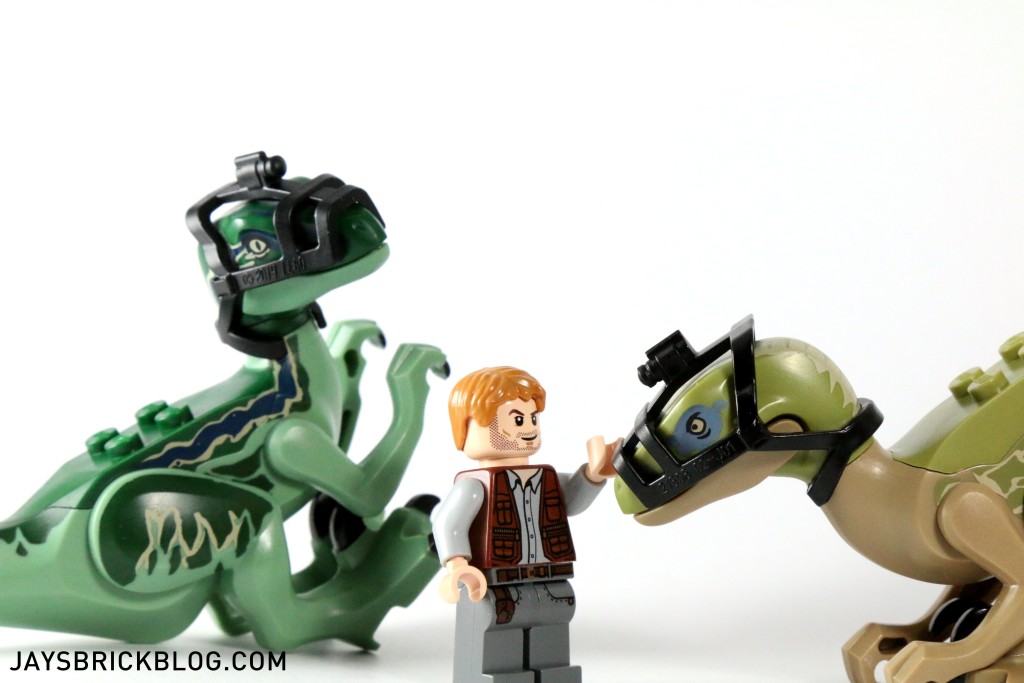 Thanks for reading! I’ll leave you with a photo of Owen spending some quality time with his cute and cuddly friends.

For more reviews of other themes, be sure to check out the Review Hub!