This weekend was a pretty good weekend because I got to watch Jurassic World in the cinema. I won’t spoil too much but I will say that it’s a lot of fun and has everything you could ever want in a Jurassic Park movie. Fans will not be disappointed! I could go on about how they managed to nail all the nostalgic and iconic elements that made Jurassic Park a cinematic classic and how Chris Pratt is such an incredible lead actor.

Just go watch it – you won’t be disappointed!

With the movie fresh in my mind, I figured that 75920 Raptor Escape would be a suitable follow up to my previous Jurassic World review, Raptor Rampage. Chris Pratt’s Velociraptors stole the show and I wanted to waste no time in getting the whole pack together on my LEGO display shelf! 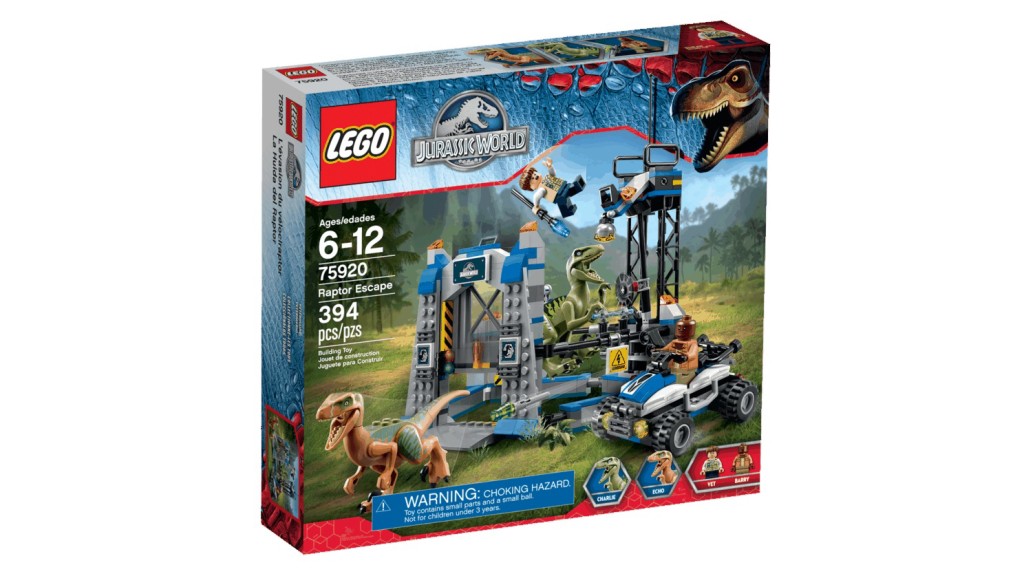 Just for fun, I actually live-streamed the entire Raptor Escape build on Periscope on Saturday night which was a lot of fun. I’ve always wanted to live stream a LEGO build a decided to finally do it yesterday. I had a really good experience on Periscope, and may do it again very soon. 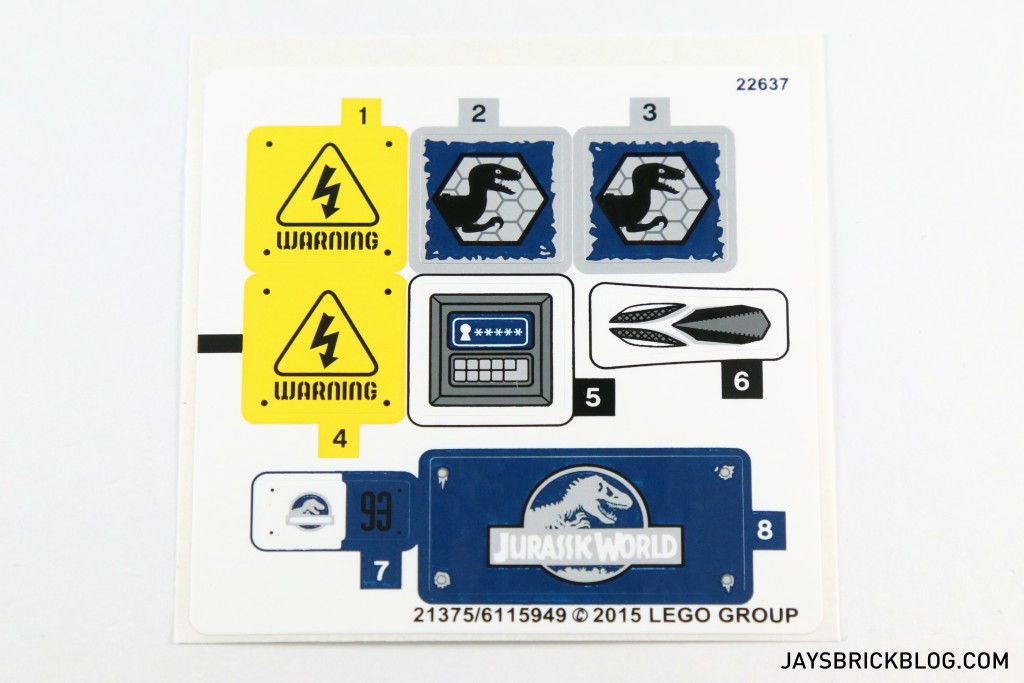 Here’s the sticker sheet for the set. 8 stickers isn’t an unbearable amount and there are some pretty cool ones like the Raptor symbols, electric fence warning signs and the small vehicle number plate (sticker #7) which has a cute little nod to the original Jurassic Park which debuted in cinemas in 1993. 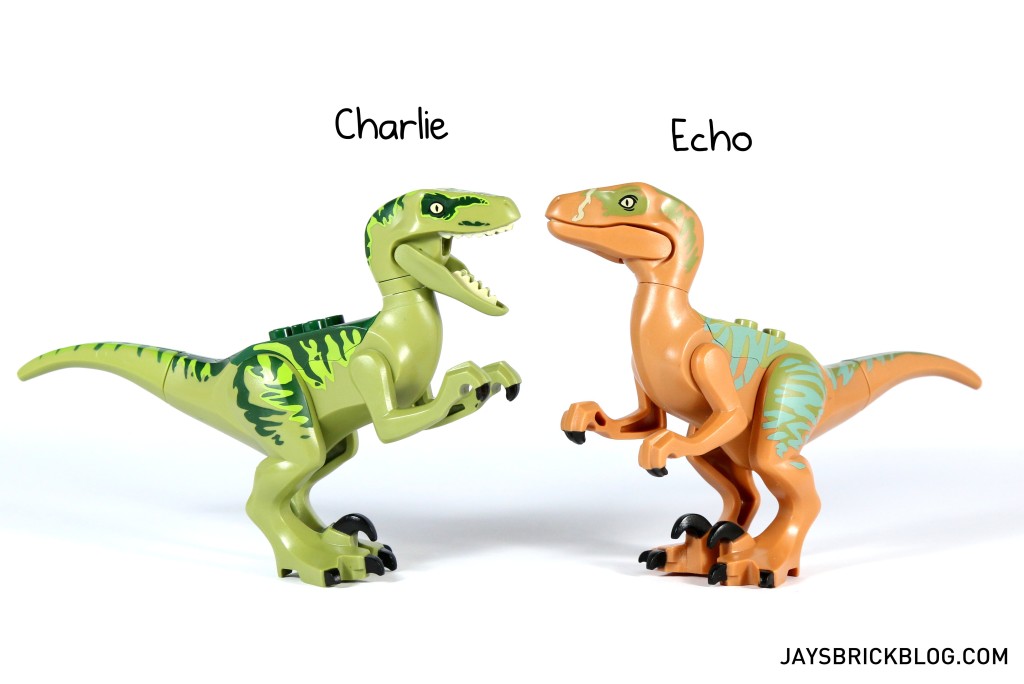 The dinos are the undisputed stars of Jurassic World (LEGO sets and the movie) and in Raptor Escape, we get the remaining 2 Velociraptors – Charlie and Echo! I’m really glad to have all 4 Raptors to keep Owen (the protagonist) company.

Charlie is a predominantly green raptor, who by far looks the most ‘natural’ and Echo has a peachy, orangey shade with greenish trimmings. 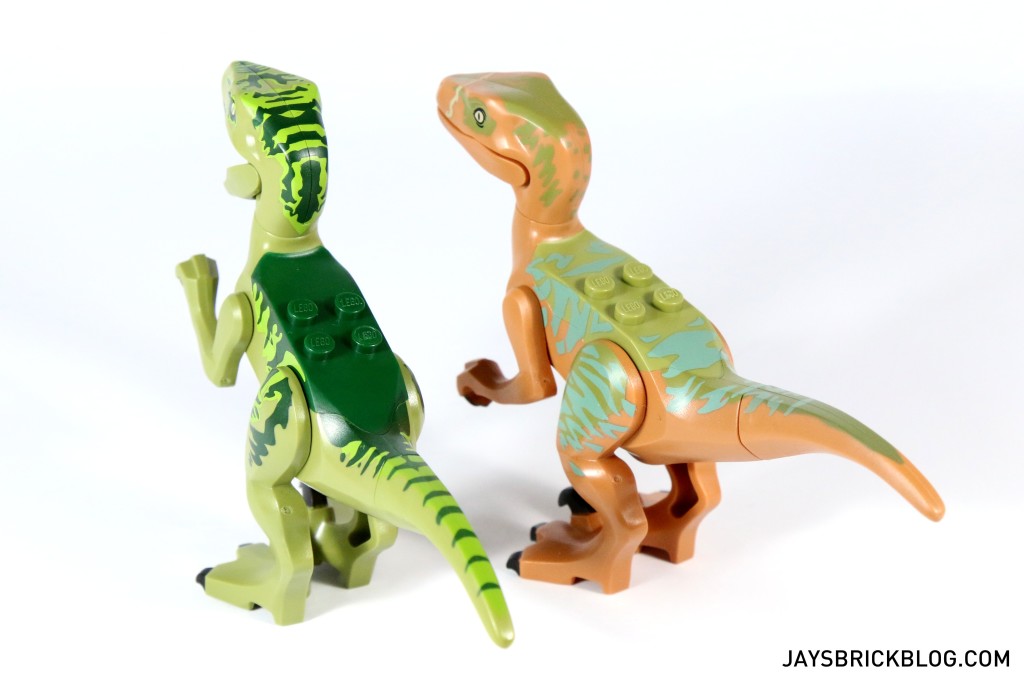 As I mentioned in my review of Raptor Rampage, the LEGO Velociraptors are exquisitely designed and Charlie and Echo are no exceptions to the rule. I really love that each Raptor has distinct body markings, which go a long way in establishing their unique identities. I appreciate the fact that LEGO didn’t half-arse it and lazily recolour each Velociraptor. 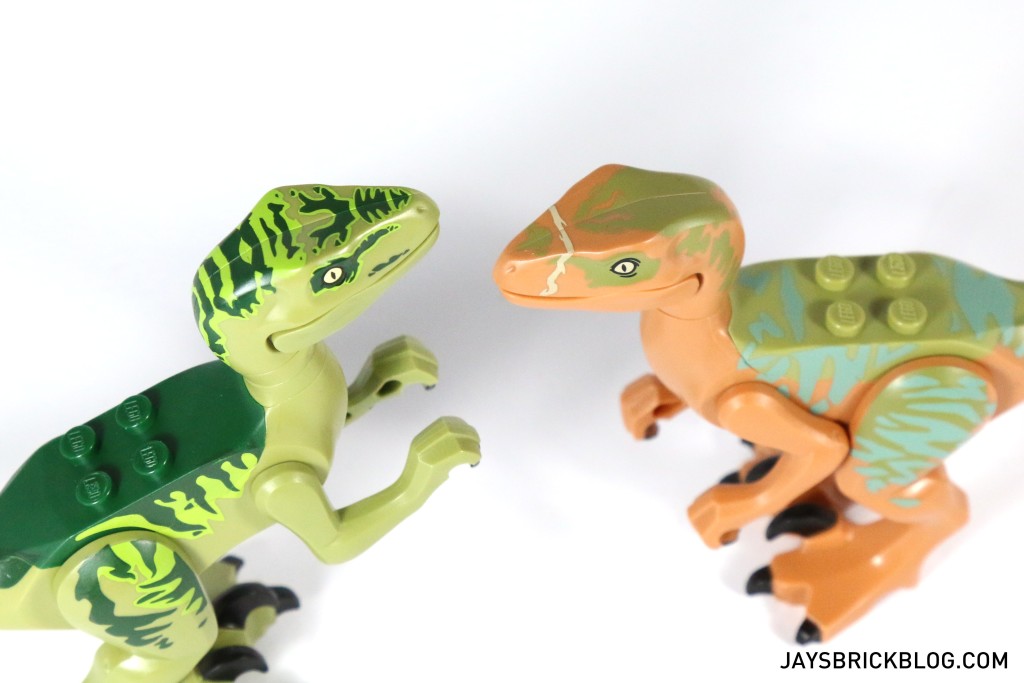 Out of the two, I’m a fan of Charlie’s body markings and overall colours – it just looks a lot like a traditional dinosaur should look like. Echo’s orangey skin makes him look kind of odd, with his skin looking unnaturally raw. 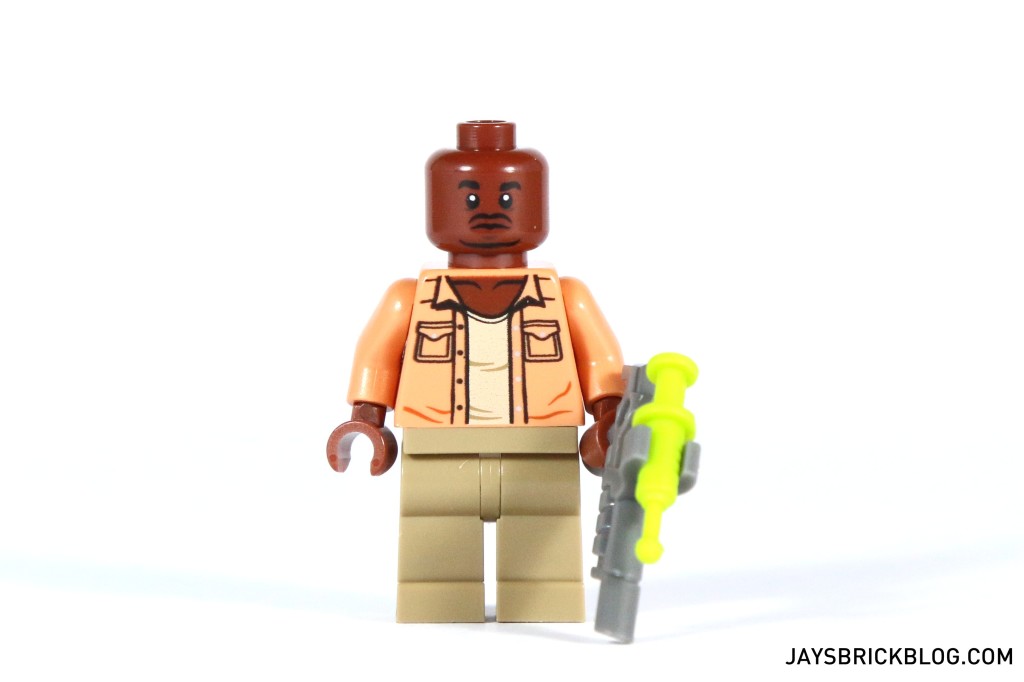 Let’s take a look at the minifigures. First up is Owen’s right hand man, Barry who is played by Omar Sy in the movie. Like Owen, he is a part of the Velociraptor training program and gets along very well with Blue, Charlie, Delta and Echo.

Barry’s minifigure is pretty decent, I love his khaki pants and orange shirt combo. It also helps that he’s a dark-skinned minifig which you don’t get very often. More minifigure diversity is always welcome in my books.

Barry is equipped with a standard issue tranquilizer rifle in case Charlie and Echo misbehave. 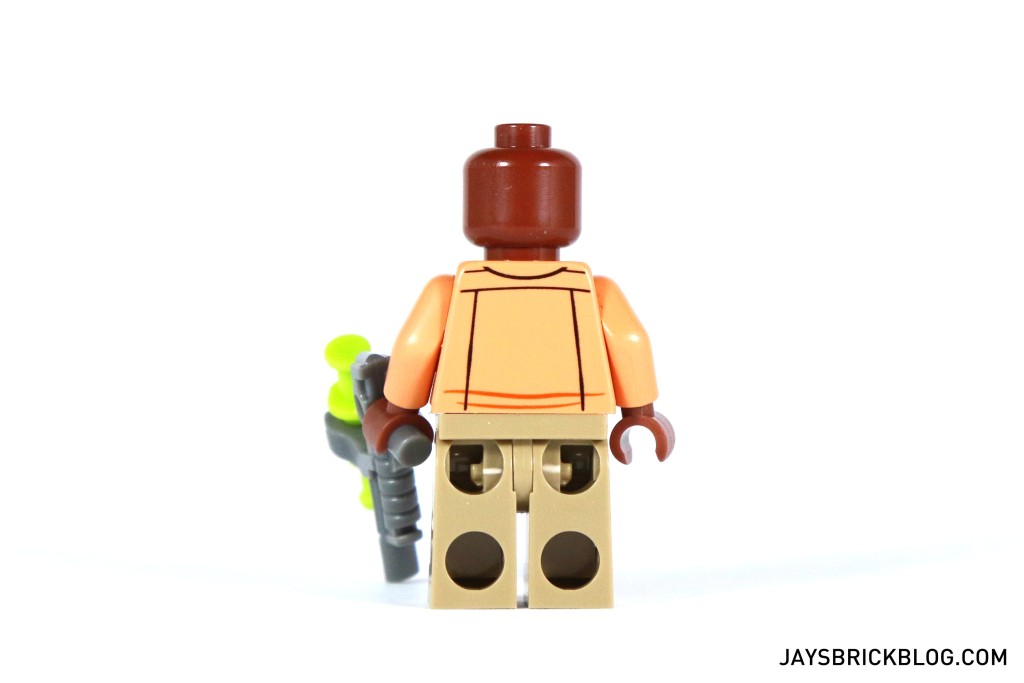 Barry has some decent back printing but no alternate face, which is a bit of a letdown since he’s a major-ish character. 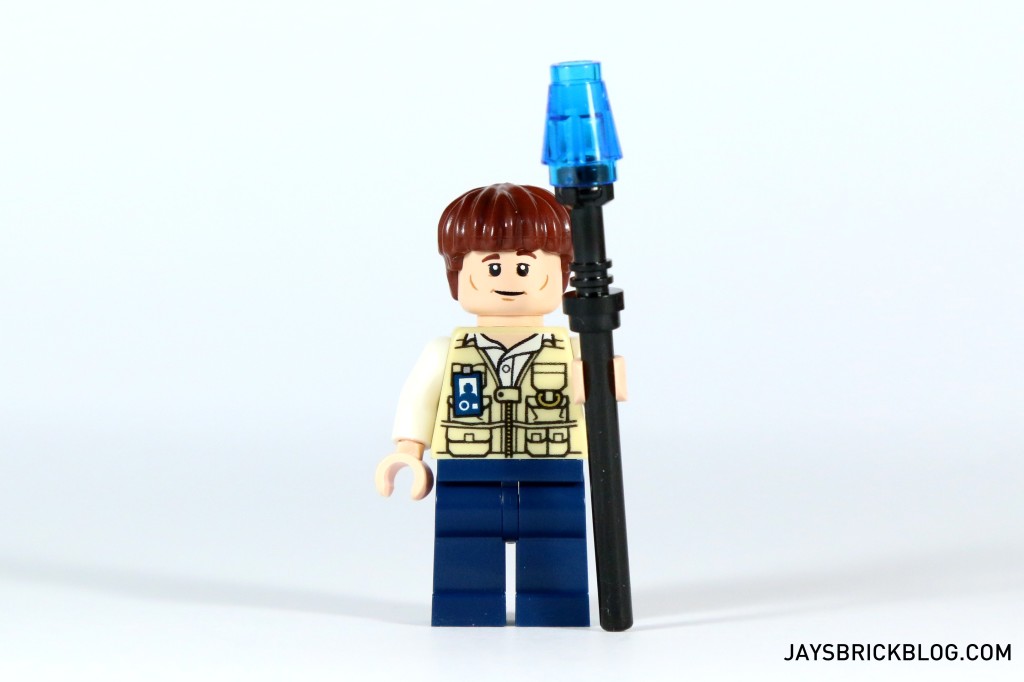 Next is Vet. Just Vet. No idea if that’s his name or if that’s his occupation or if he’s a Vet named Vet. Vet has a pretty uncommon hairpiece and a fairly lackadaisical facial expression. He has a terrific torso with lots of detail that’s printed on very sharply.

Not sure how this helps his veterinary duties, but he also has a shock stick to jab misbehaving Velociraptors. 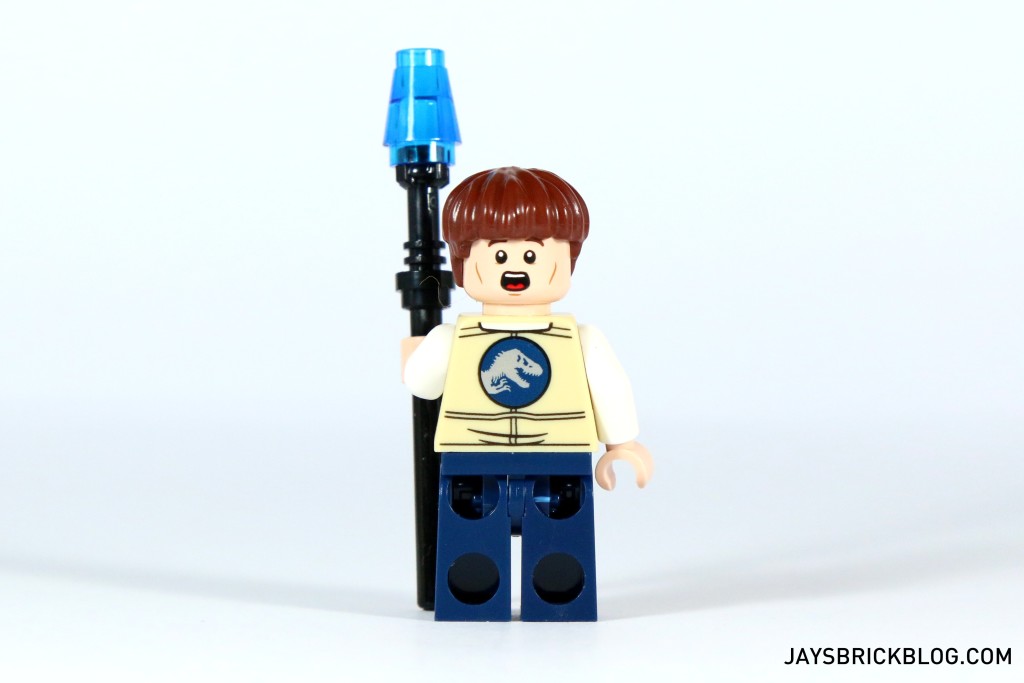 Unlike Barry, the vet has an alternate face with an awestruck expression. It doesn’t exactly scream terror and fear – more like, “oh wow, I didn’t know the Raptors could do that”.

The back printing on tan cargo vest is quite brilliant – I basically love anything with the Jurassic World logo slapped on it. 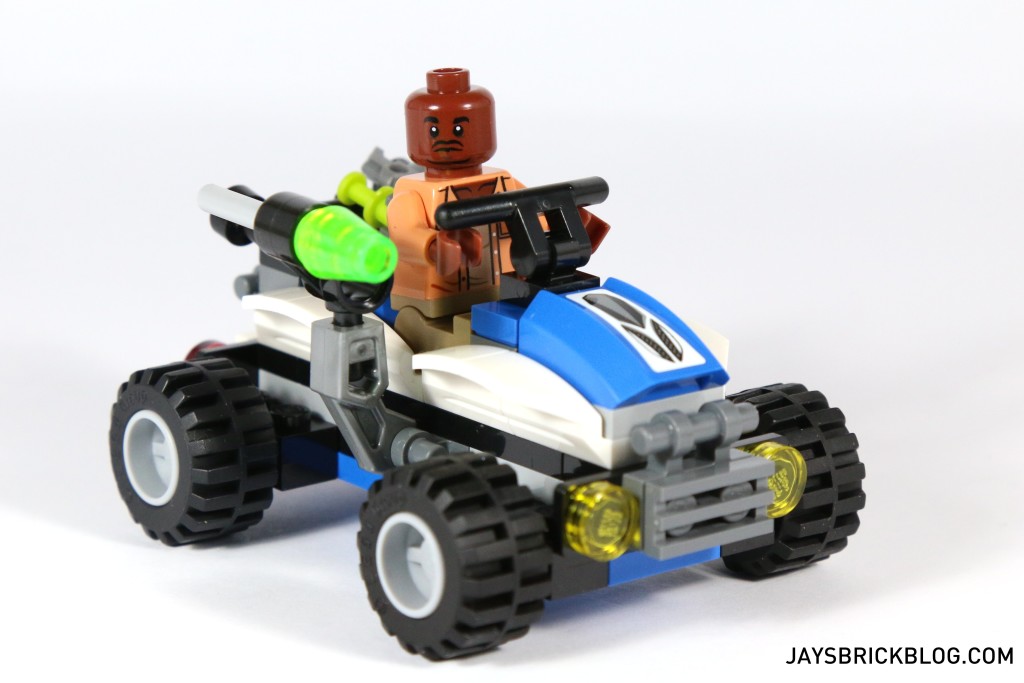 True to the movie, Barry has an ATV or Offroad vehicle to move around in. It’s a really simple vehicle and looks a lot like a police ATV, which is a bit of a letdown. The colour similarities with City Police vehicles is one of my biggest complaints of the Jurassic World sets and vehicles.

Barry’s ATV sports a single flick fire missile (why is this still a thing?!) which is pretty lame when you think about it, but on the vehicle itself, it doesn’t look too bad. Cosmetically, I guess flick fires aren’t the worst thing in the world. 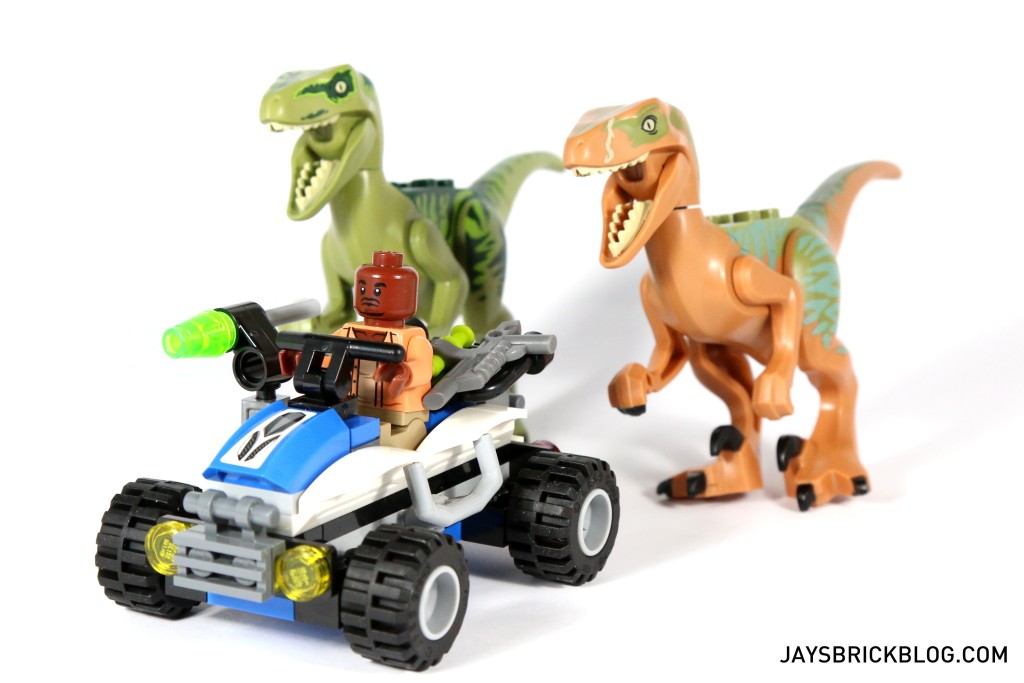 Here’s Barry taking Charlie and Echo out for a run. Gotta get the Raptors out of their enclosure once in a while to help them release all that pent up energy. 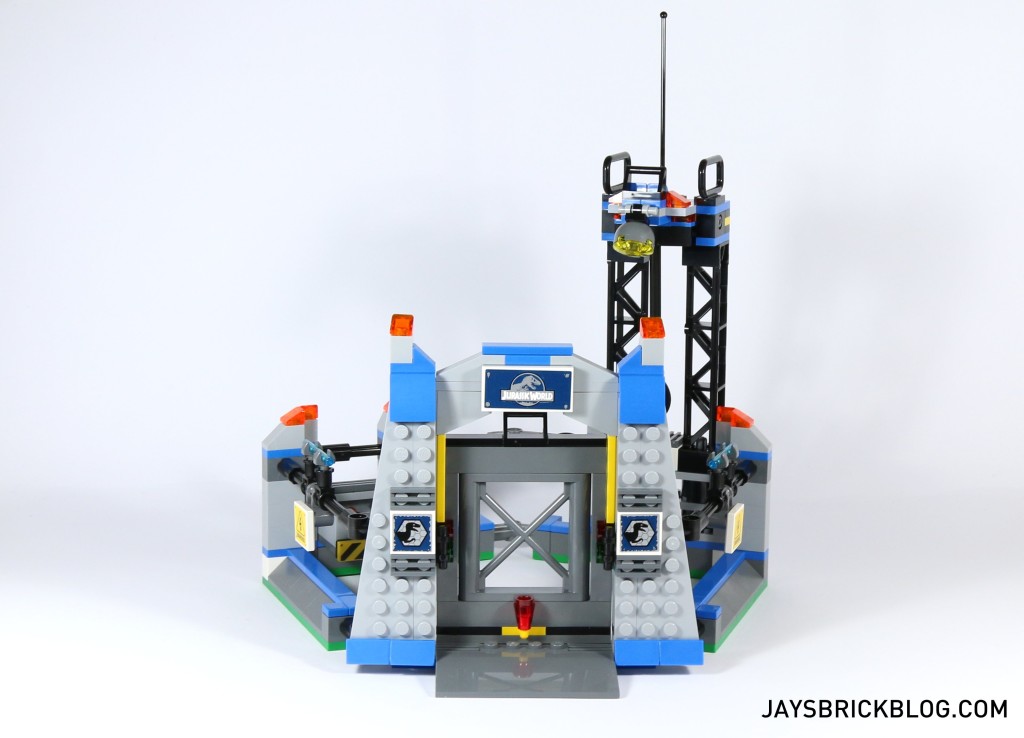 Here’s the main build – the Velociraptor pen. For a small-ish set, when the entire thing came together, I was pleasantly surprised by how large the entire structure turned out to be. I do have to say that the build was quite repetitive since the wall sections are generic and there aren’t any notable build techniques, making it quite an easy breezy build. 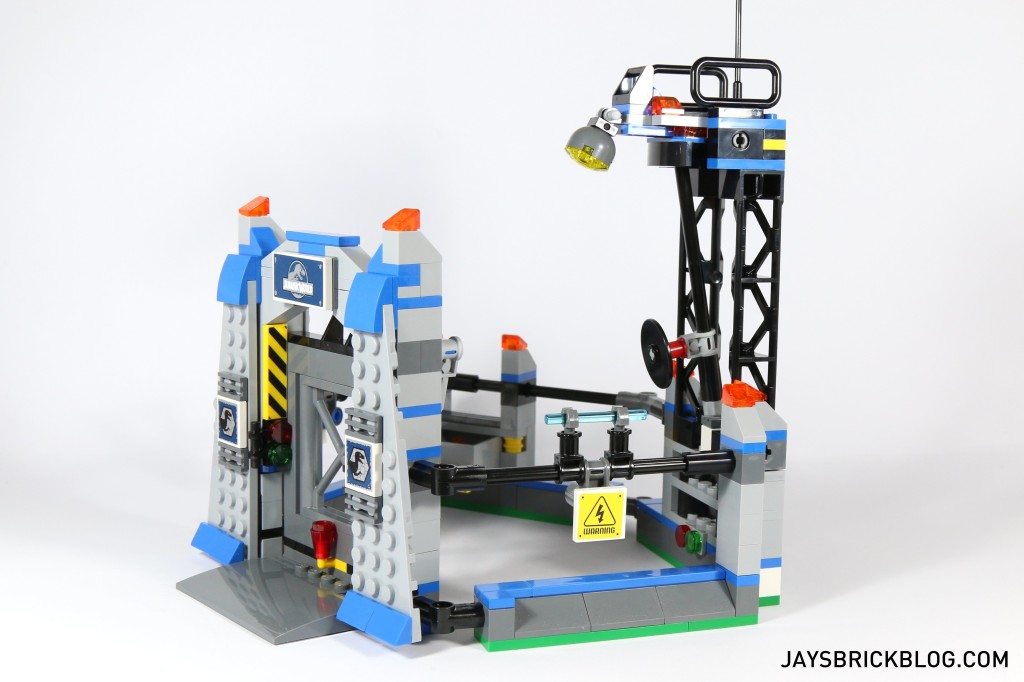 I normally link the size of a finished set to its LEGO box size, so I was very surprised that the structure turned out to be a lot bigger than expected. The observation platform towers above the enclosure and has a spotlight tacked on to it. 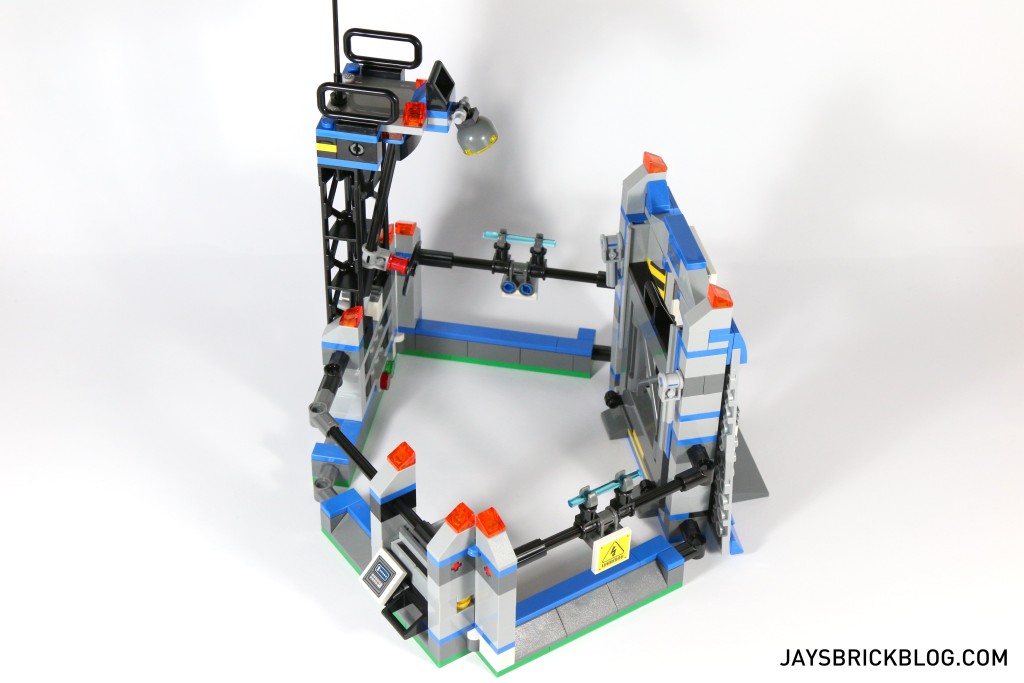 Here’s an aerial view of the Raptor Escape enclosure. It’s shaped like a wonky pentagon and takes up quite a bit of space on my display shelf! It’s about 20 cm wide, to give you a sense of its size. 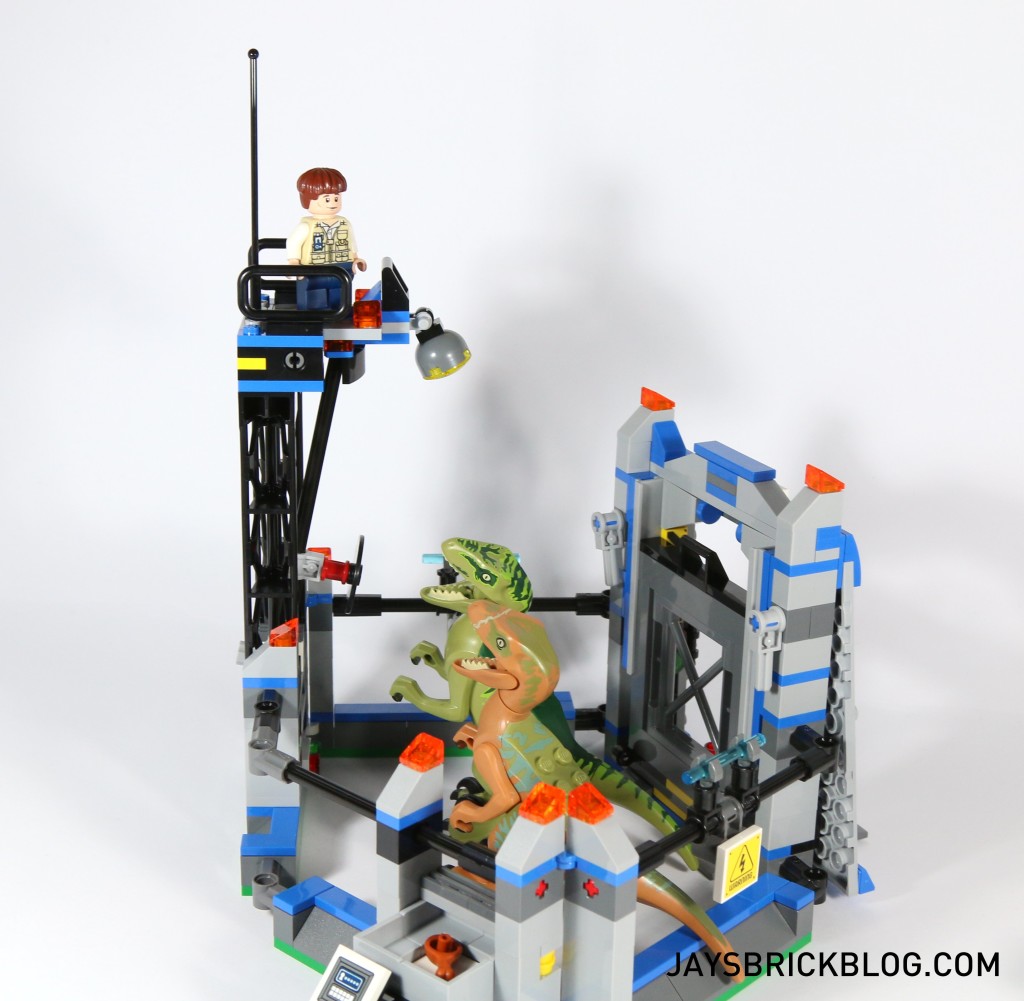 Both Raptors comfortably fit into the pen, although at several angles their tails might end up breaching the fence. The vet is perched up on the observation tower to keep an eye of the Raptors inside and there’s a little interactive play feature built into the tower. Can you guess what it does?

Whoever designed the tower needs to be fired. There’s a small round black dish that acts as a button for the Raptors to press, I imagine when their tummies start rumbling and they’re craving Vet-meat. Jab the target and the poor Vet falls into the Raptor enclosure like Manna from the heavens.

The play feature is kinda fun. The idea of sending a hapless Jurassic World employee to his death is quite entertaining in a very morbid kind of way. The mechanism works almost flawlessly as you’d expect it to, so no complaints in that department. 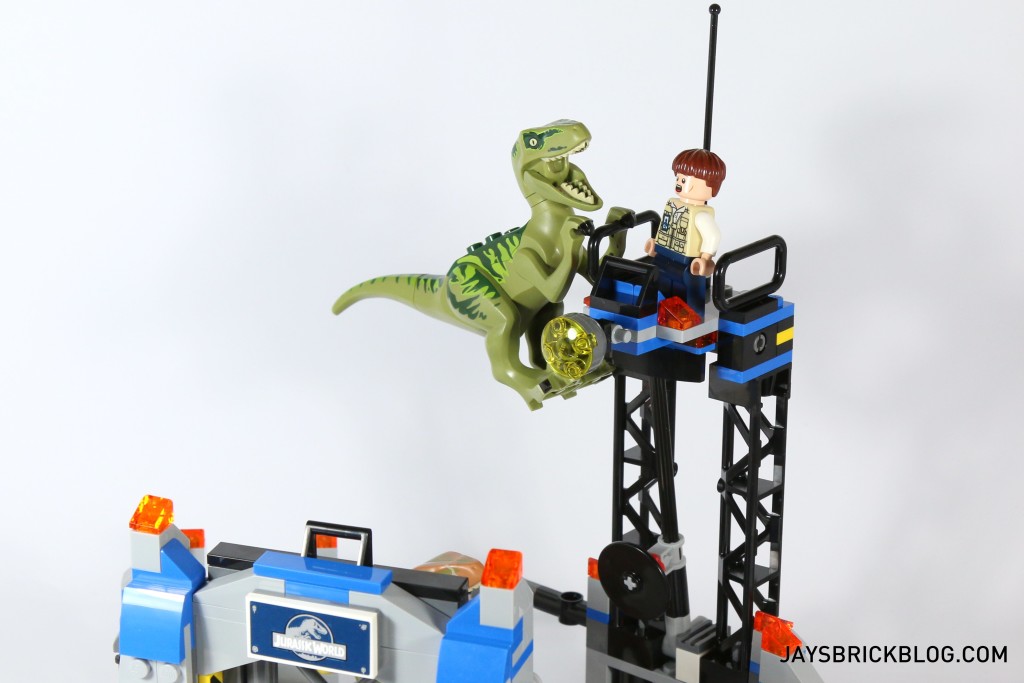 If the Raptors don’t figure out the button pressing mechanism, they can always just try to jump really really high to reach their afternoon snack. 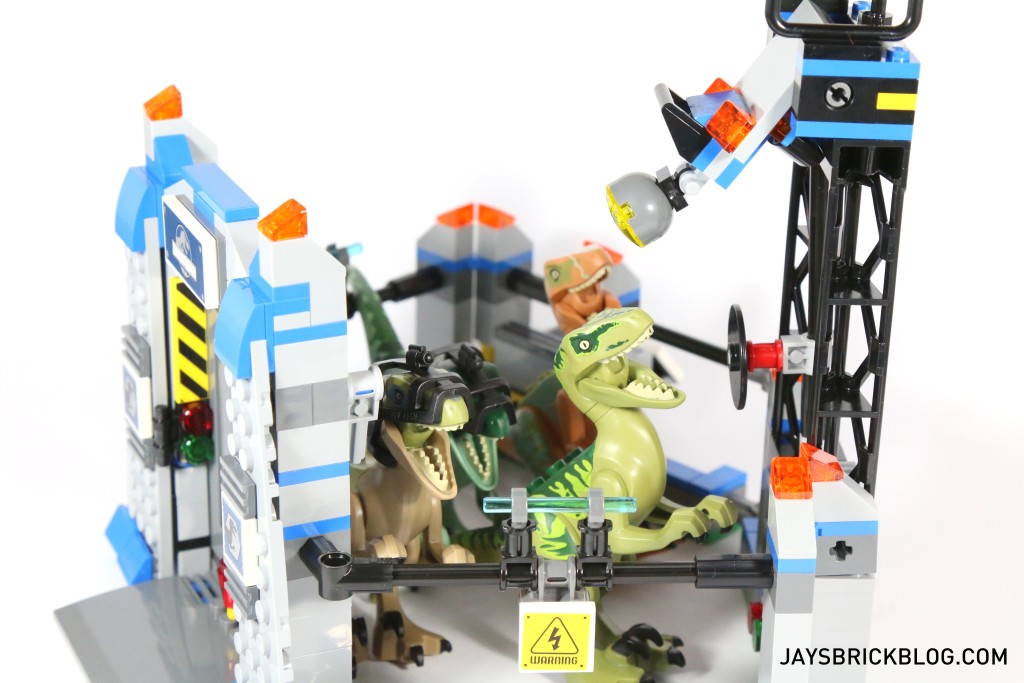 In the movies, Owen’s pack is made up of four other Velociraptors (Chris Pratt is the Alpha, of course) and you can squeeze all four of them into the enclosure although it’s a pretty tight fit. I don’t think the Raptors will appreciate the lack of personal space and are constantly itching to escape or go on a rampage. 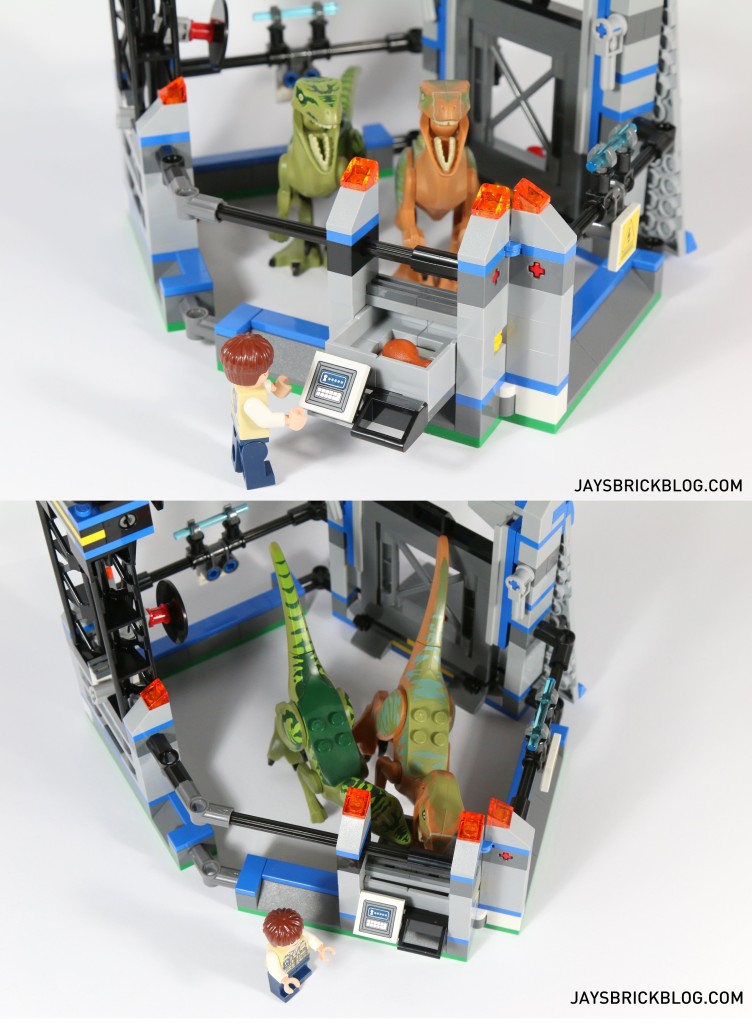 Another minor interactive feature is the feeding mechanism in the Raptor enclosure. There’s a small feeding slot that’s built into the fence which consists of a squarish tray that you load up with delicious (non-human) treats such as a chicken drumstick that can be slid into the pen without the Vet endangering himself in the process.

There’s even a small computer console with some sort of password input to operate the feeding slot. 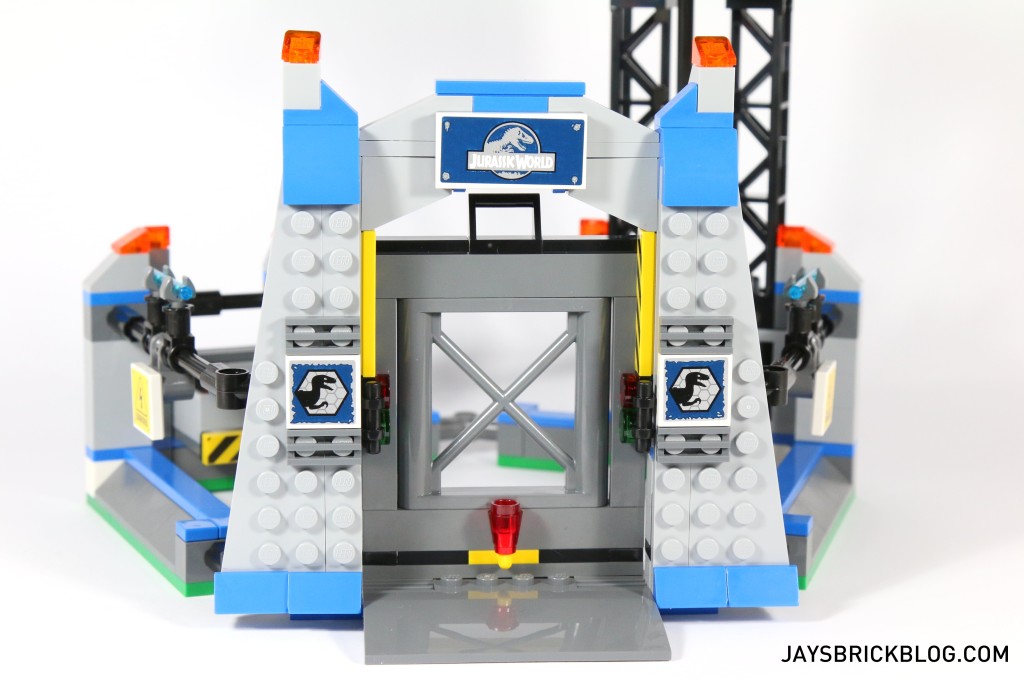 The last notable feature of the Raptor pen is the gate. It looks a lot like the original Jurassic Park gates, albeit slightly more modern. The gateway has some pretty awesome details like the stickered Jurassic World sign and the two Raptor logos. 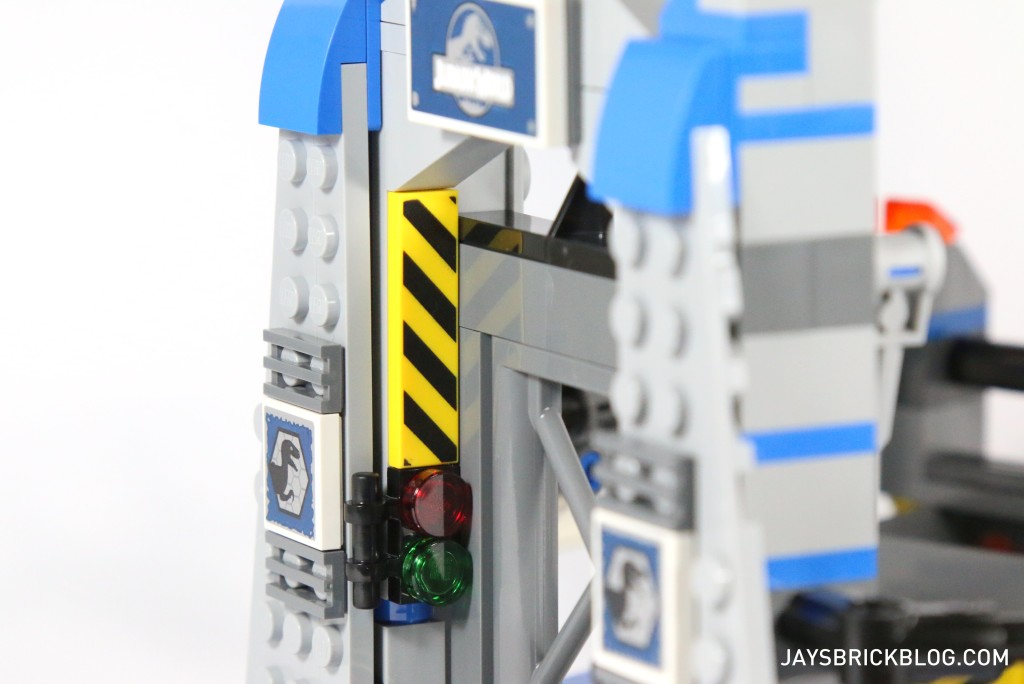 I was pleasantly surprised to encounter these printed 1 X 4 tiles with the bumblebee DANGER stripes on them. 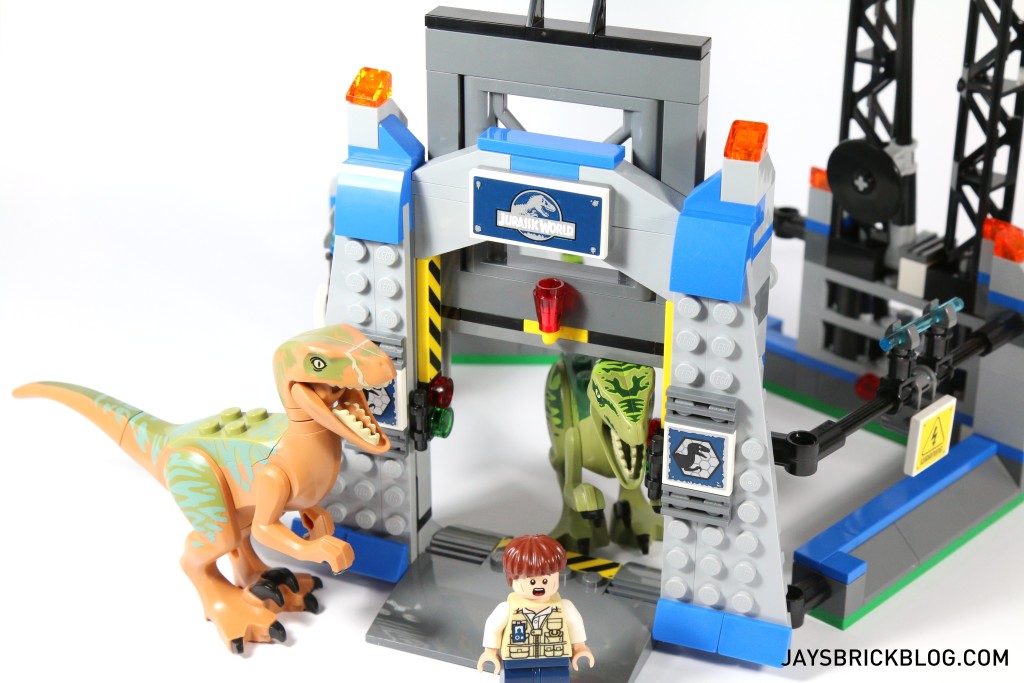 You can raise the gate (which allows the Velociraptors to escape) by tugging it upwards. The gate mechanism is a little clunky and it isn’t as smooth and frictionless as I would’ve liked. You either have to be very slow and steady when raising the gate, or it gets stuck or jammed more often than not. 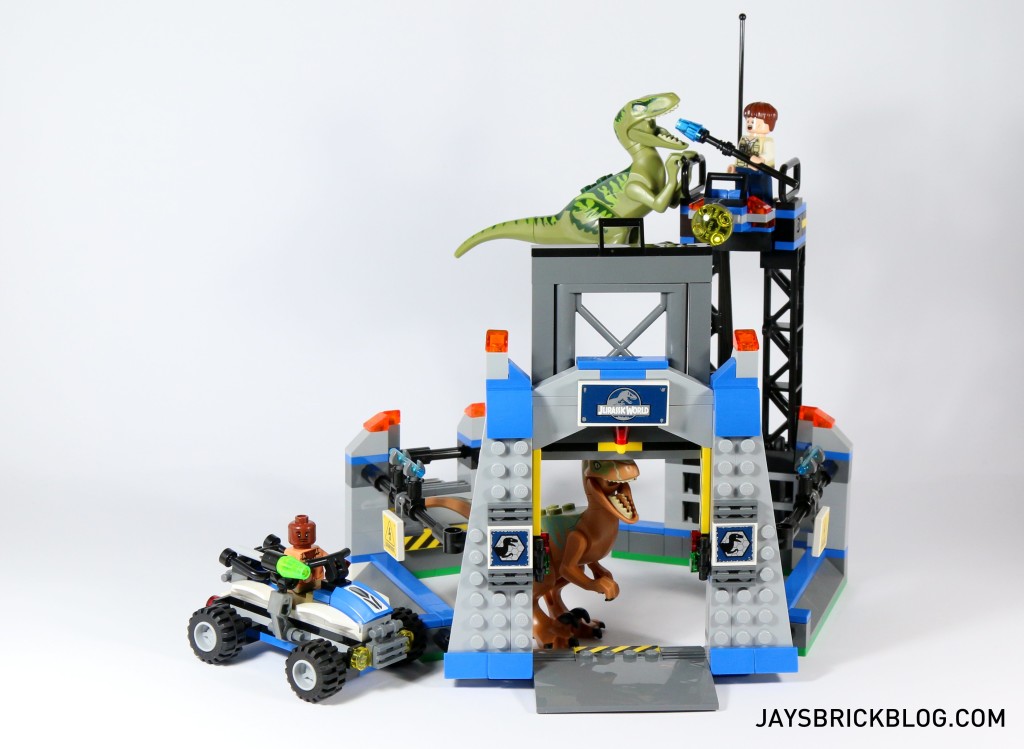 Final thoughts: I enjoyed building Raptor Escape much much more than its counterpart, Raptor Rampage which I slammed because of its ridiculously hefty price tag. Despite being $10 cheaper, Raptor Escape feels like a much more substantial set compared to Rampage. It’s larger and feels more satisfying and even has about 70 more pieces!

LEGO pricing will forever be a mystery for me, but I guess that LEGO figured that it could charge a premium on the only set which contained the two main characters and people would still go nuts about it.

I will always be partial towards “structural” LEGO sets compared to “vehicular” ones. Raptor Escape is an impressive looking set – you certainly wouldn’t have guessed that it was so big by looking at the box. Because it’s an enclosure of sorts, it also fits right into the Jurassic Park franchise as you will always have a need for a place to store dinosaurs.

Raptor Escape is a great Jurassic World set and is the most ideal set if you’re on the fence about the theme and want to decide if LEGO dinosaurs are really for you. At $70, if you can get it at 20% off (which is right now at Myer till the 15th of July), it makes it slightly easier to justify dropping money for this set. It’s almost the perfect gateway set for fans of Jurassic World.

With two very popular Velociraptors as the stars of the set, you almost HAVE to buy this set and Raptor Rampage to collect all 4 of Owen’s Raptor Buddies. Luckily, Raptor Escape has all the winning elements of a superb Jurassic World set. 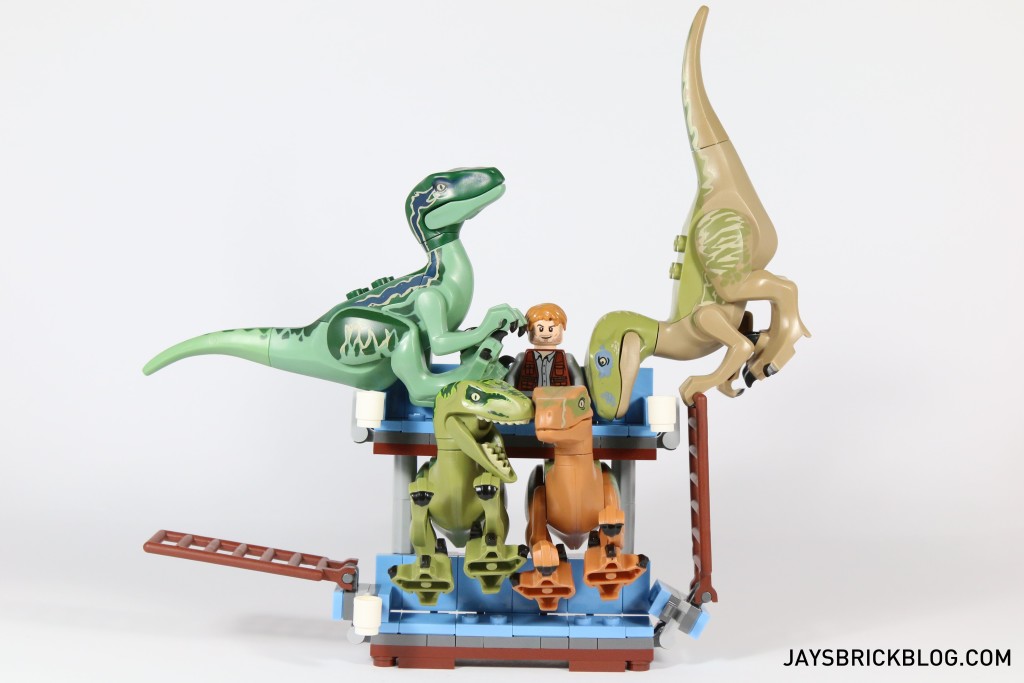 As always, I hope you enjoyed my review of 75920 Raptor Escape. I’ll leave you with one of my favourite photos I’ve taken recently!

“Introducing, the double-decker couch. So everyone can watch TV together and be Raptor buddies!”

Be sure to check out the Review Hub for more LEGO Jurassic World reviews!