If you’ve been reading my blog for awhile, you’ll probably know that I’m a big fan of LEGO dinosaurs, so I was pretty stoked when the entire Jurassic World Isla Nublar theme showed up on my front door from LEGO.

The first cab off the ranks is 75937 Triceratops Rampage, featuring the triumphant return of the LEGO Triceratops, which hasn’t been since 2012’s Triceratops Trapper.

Is there more to this set than the all new 2019 LEGO Triceratops? Let’s take a closer look.

Special thanks to LEGO for sending this set for review. 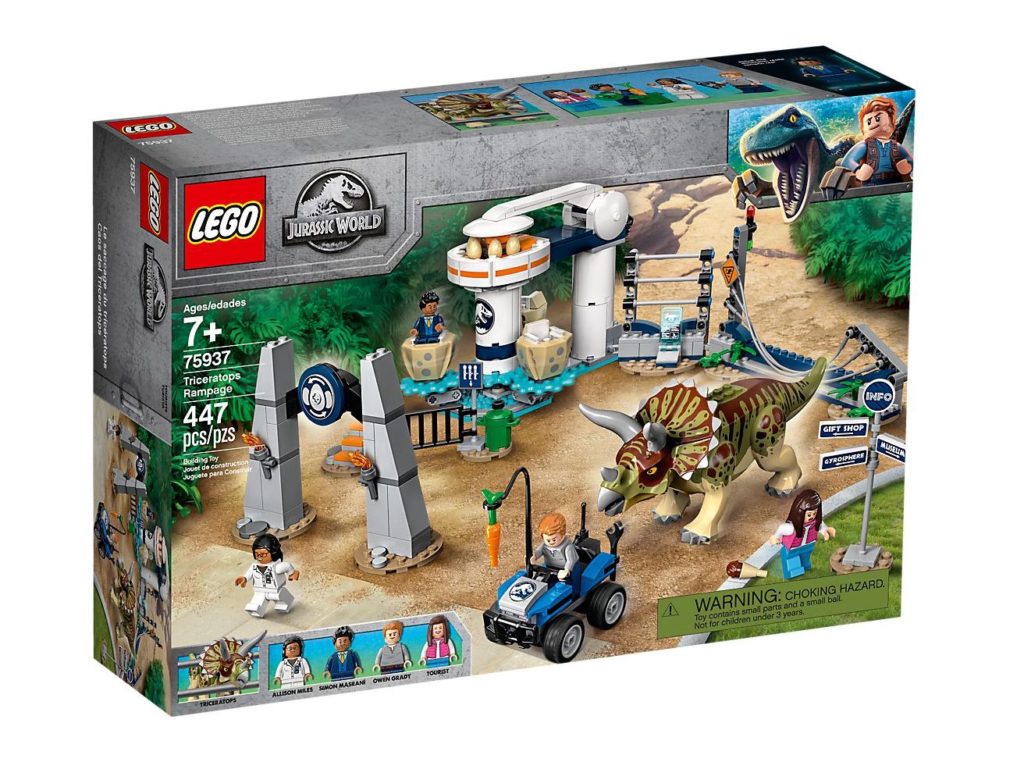 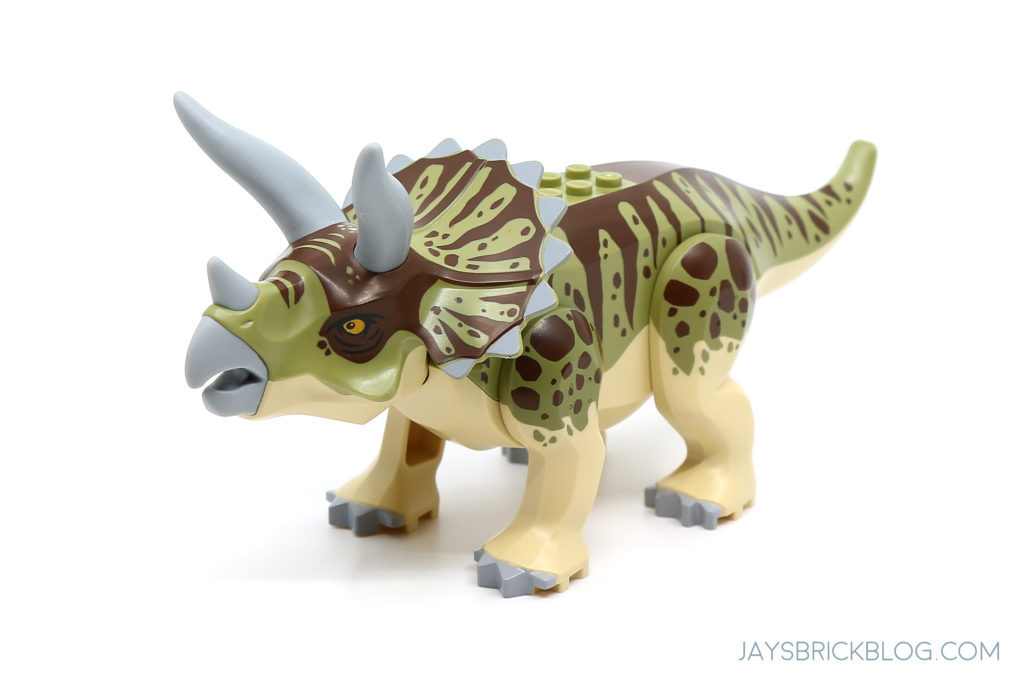 The primary appeal of any Dino-themed sets are the LEGO Dinosaurs themselves. Here’s a look at the new LEGO Triceratops, which comes in an exciting brand new coat of paint.

The new Triceratops has an olive colour scheme with brown spots and stripes across his body, head and frill. 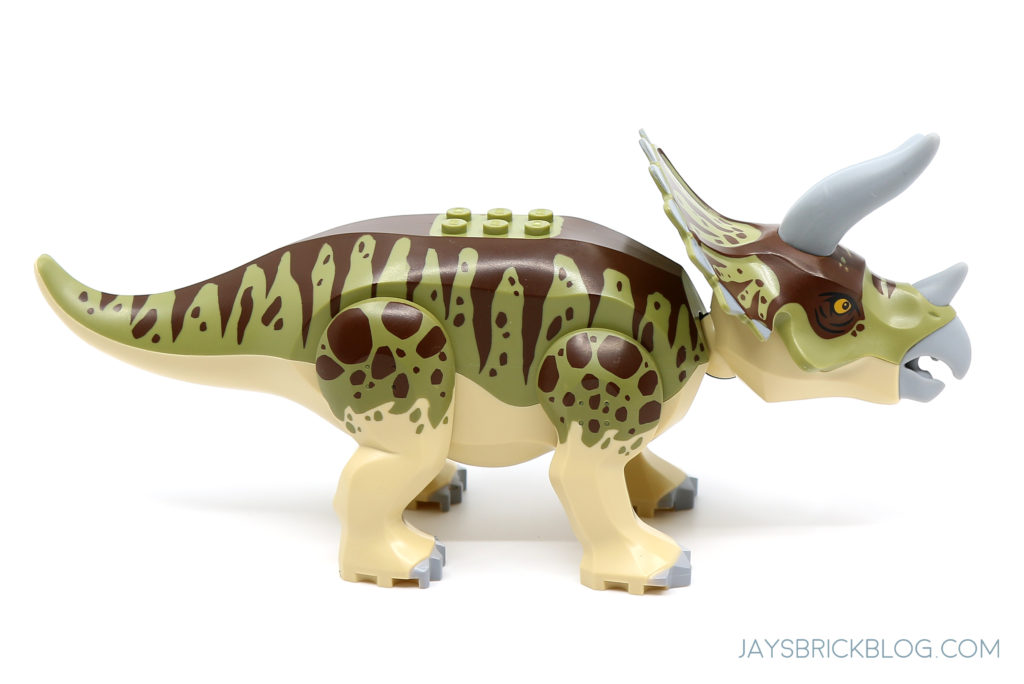 In my honest opinion, the Triceratops is one of the best dinosaur moulds that LEGO has ever made, and many dinosaur fans including myself have been quite let-down that it didn’t make an appearance in any of the Jurassic World set, so it’s fantastic to see it back and with a whole new colour scheme.

The Triceratops’ horns and beak are made out of rubbery plastic, seamlessly fused into the head, and the head can be posed in a variety of different angles. 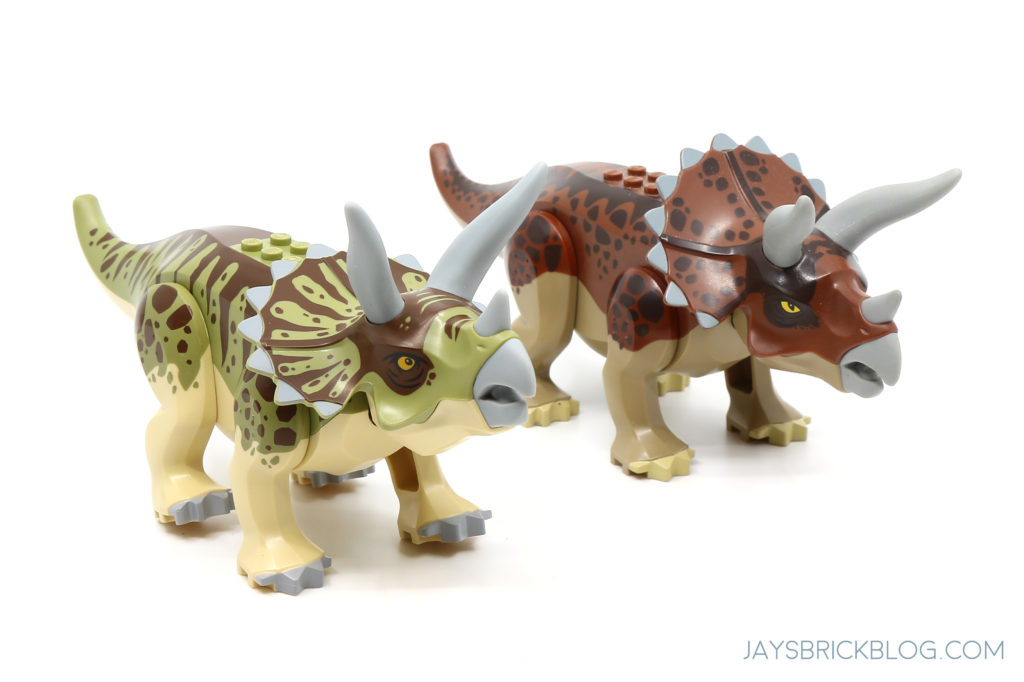 Here’s a comparison with the original Triceratops, which had a browner more rugged colour scheme.

I do love the contrast between the two Triceratopses, and I do like the newer colour scheme, which makes the dino look so much more exotic.

Other than that, nothing much has changed with the good ole Triceratops, which isn’t a bad thing at all. 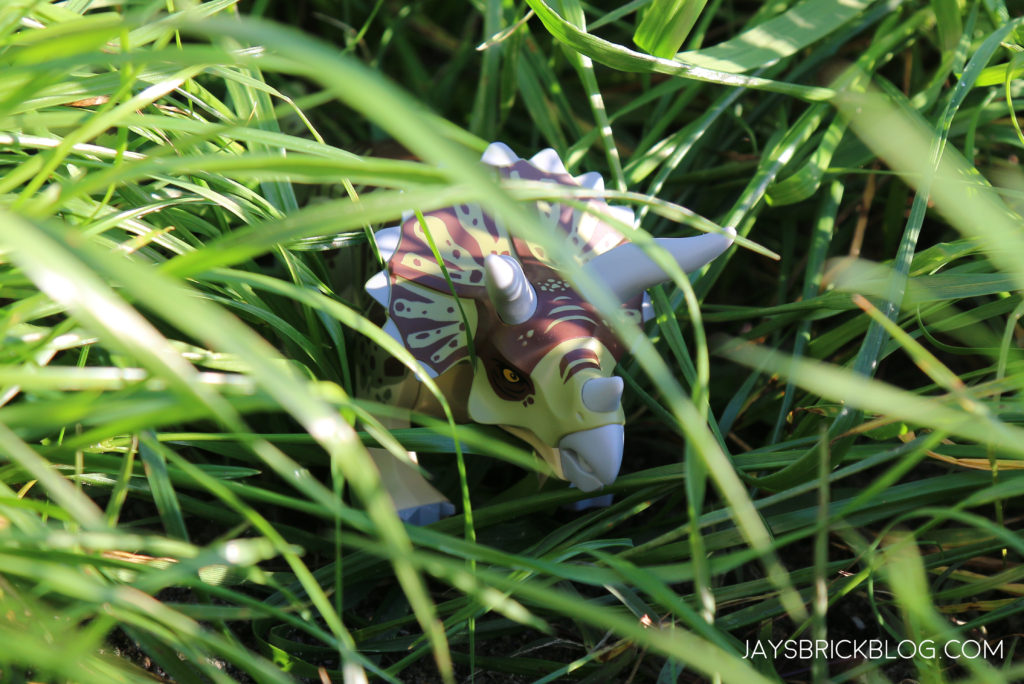 With old LEGO Triceratops retailing for upwards of AU$50 on the secondary market, the new Triceratops alone makes for a very compelling purchase all on its own. 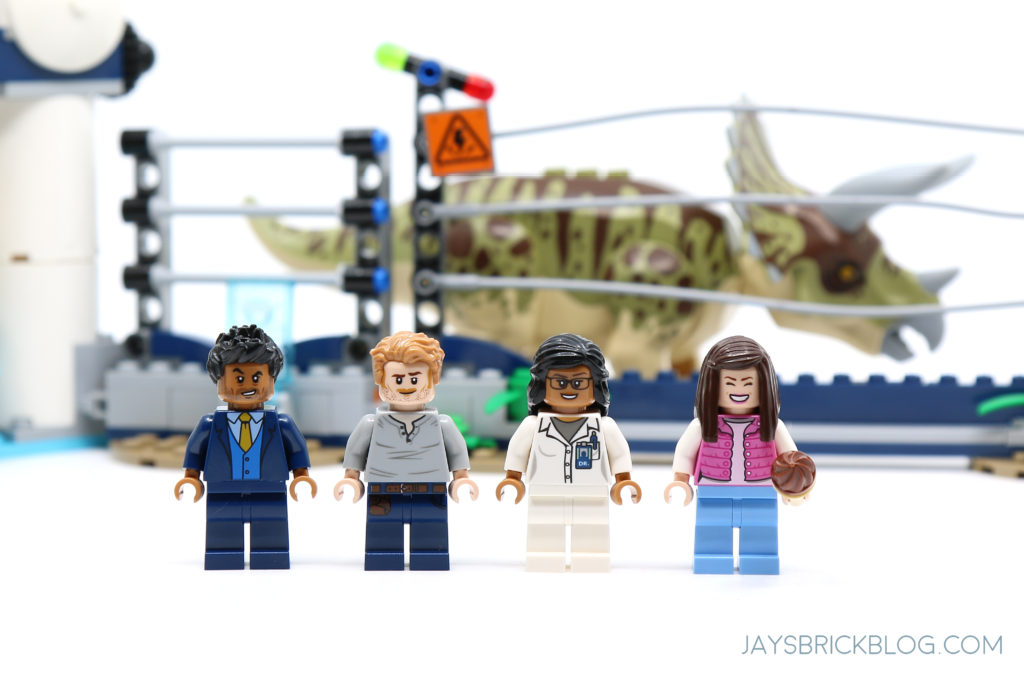 Of course, there’s more to the set than just the Triceratops, as you get 4 minifigures included as well.

Familiar faces such as Simon Masrani and Owen Grady are included in the set, as well as new character Allison Miles, and a tourist.

If you’re scratching your head about why Simon Masrani is alive, do remember that the Legend of Isla Nublar, the animated TV show these sets are based on, takes place in 2012, three year before the events of Jurassic World occur – where the park is just being setup, and only just begun opening its doors to the public. 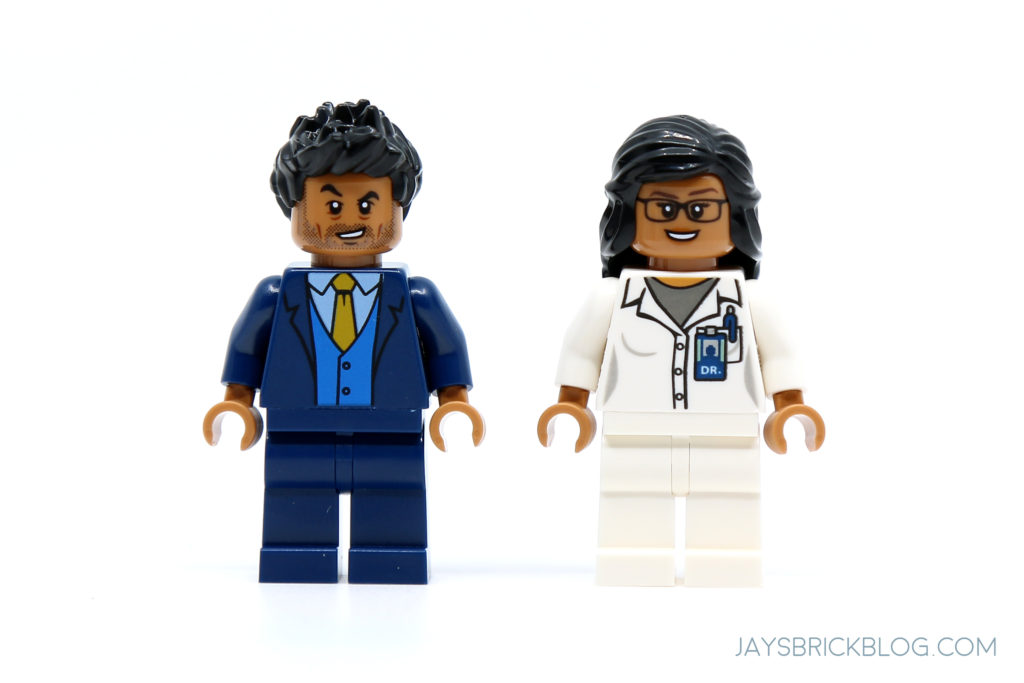 Here’s a closer look at Simon Masrani, the CEO of Jurassic World who was played by Irrfan Khan in the movie. He’s dressed in a sharp navy suit, with a lighter blue waistcoat and a yellow tie, complete with a quizzical look. \

Flanking him is a new character, Allison Miles, who’s some sort of Doctor or Scientist. It’s great to see more diverse minifigures included in sets, and I’m pretty happy to have more minifig in darker skin tones in my collection. 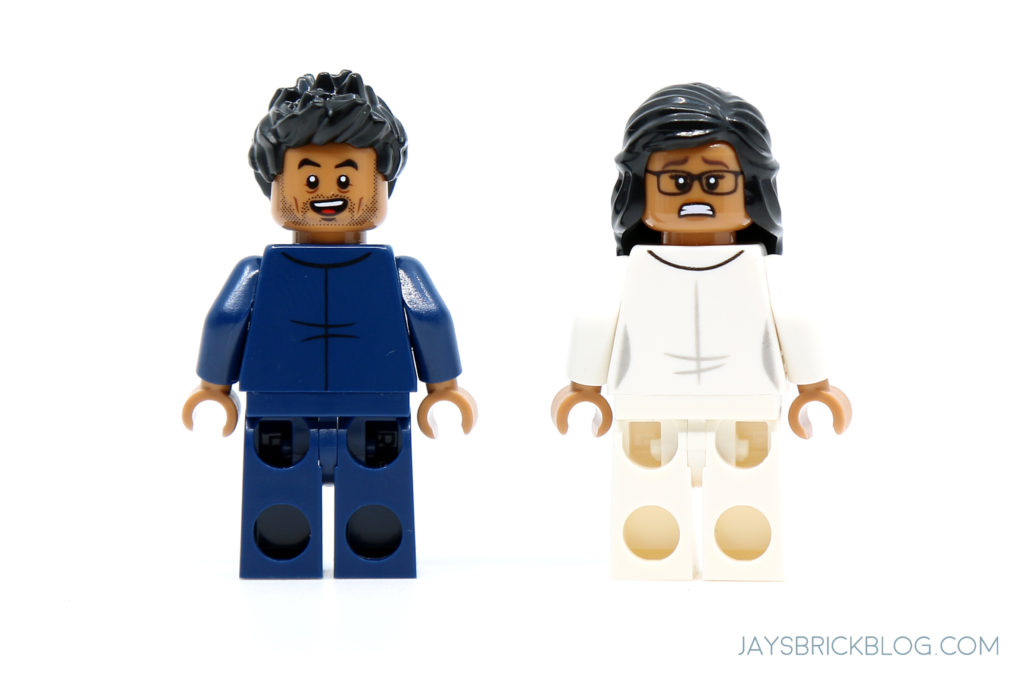 Here’s a look at both their back printing, and more importantly their alternate faces. Simon has a pretty goofy-looking happy face, and Allison has a face of sheer terror on hers. 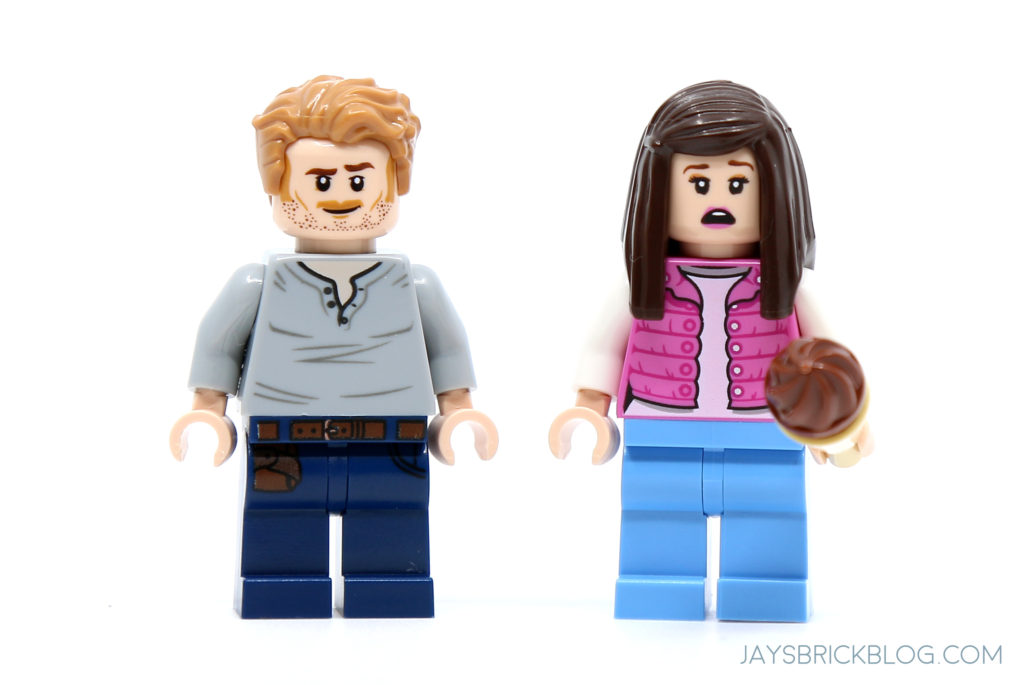 Next we have Owen Grady, played by Hollywood heartthrob Chris Pratt, and an unnamed female tourist.

Owen Grady is his scruffy old cowboy self, and comes with a grey long-sleeve henley shirt and dark blue jeans. I do like the belt and pouch printed on his legs, which is a nice touch.

The female tourist, is in a pink puffer vest, and has long straight hair, complete with a face of shock/surprise. For an accessory, she has a chocolate ice cream cone. 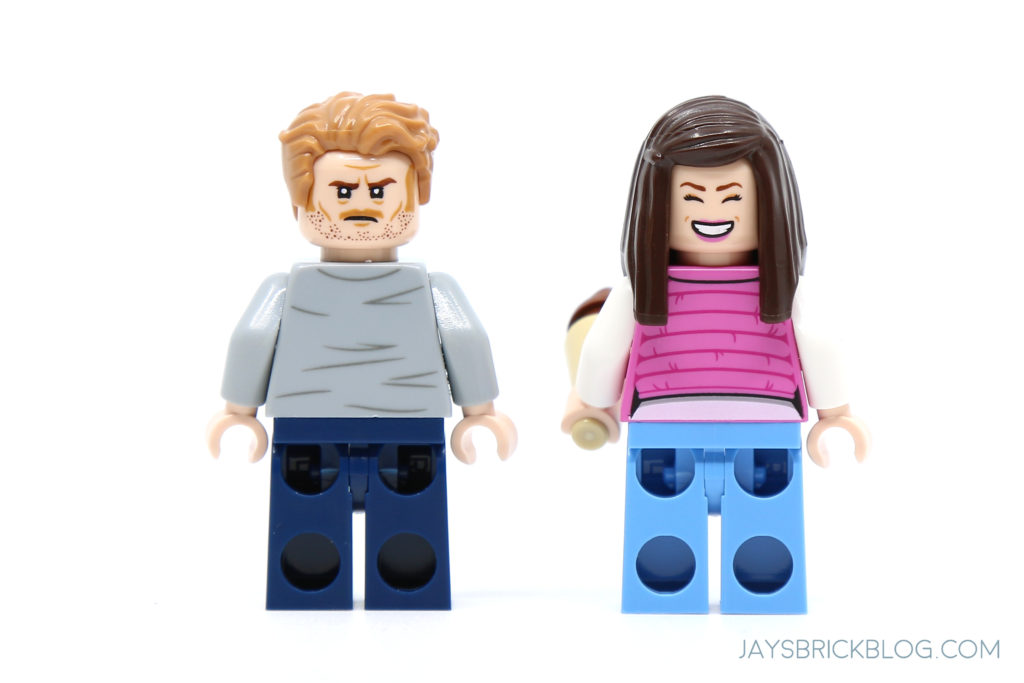 An amazing surprise was with both their alternate faces, which have amazing expressions – some of the best that I’ve seen in a long time.

Owen has an annoyed look, with furrowed eyebrows, but the female tourist takes the cake with a grinning look, that’s pretty much the LEGO version of the ? emoji.

I’m loving what LEGO are doing with the alternate faces for these licensed minifigures. It’s a breath of fresh air from the typical neutral + angry combo and also serves to introduce more expressive faces – the female tourist gores from being an anonymous minifigure to an actual character I’d keep close by as I just love her ? face. 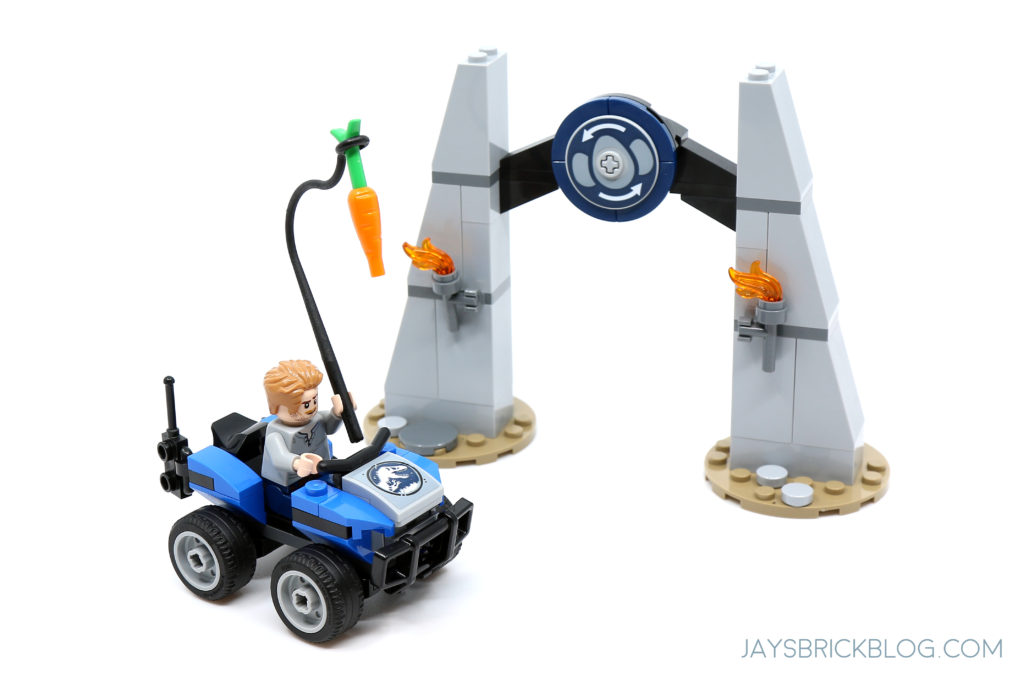 The build starts with a small All-Terrain Vehicle (ATV) that’s quite typical of those you see in LEGO City sets. It’s pretty basic, but it has a kickass front grill, which makes it look pretty tough.

You also get an entrance-gate which draws loose inspiration from the classic Jurassic Park gates. There is an egg-sign which is a little confusing as it has circular arrows on the sign, prompting you to turn it but it’s fixed in place.

Design-wise the sign is very confusing, as it’s really trying to say that this is the egg ride, where you can spin around in it, but the design language just makes it look like a play feature, which I found to be a minor annoyance. 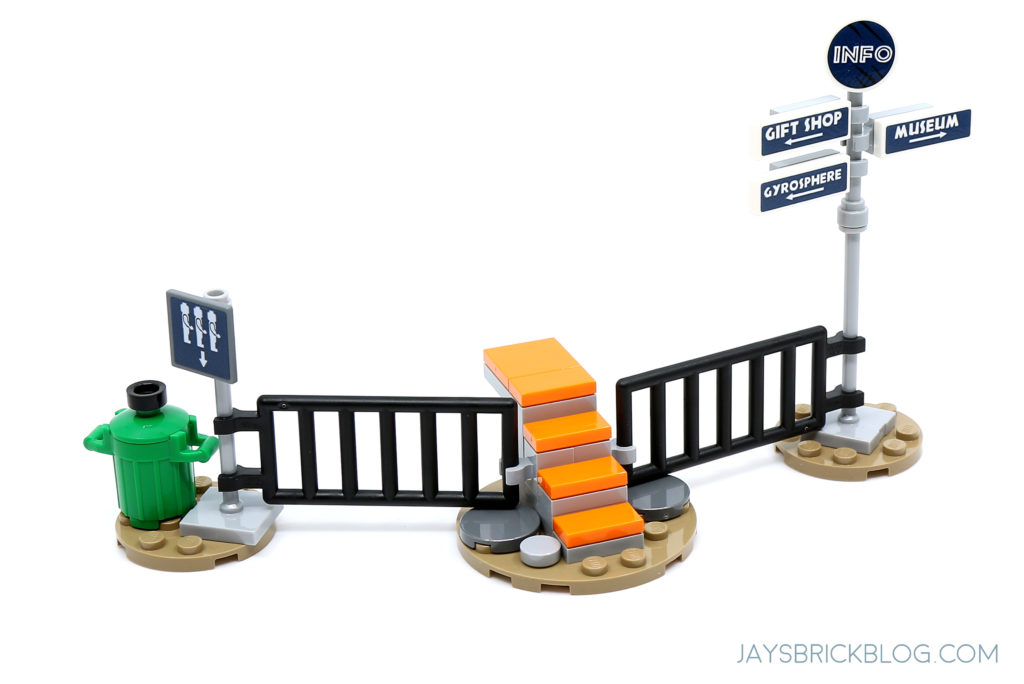 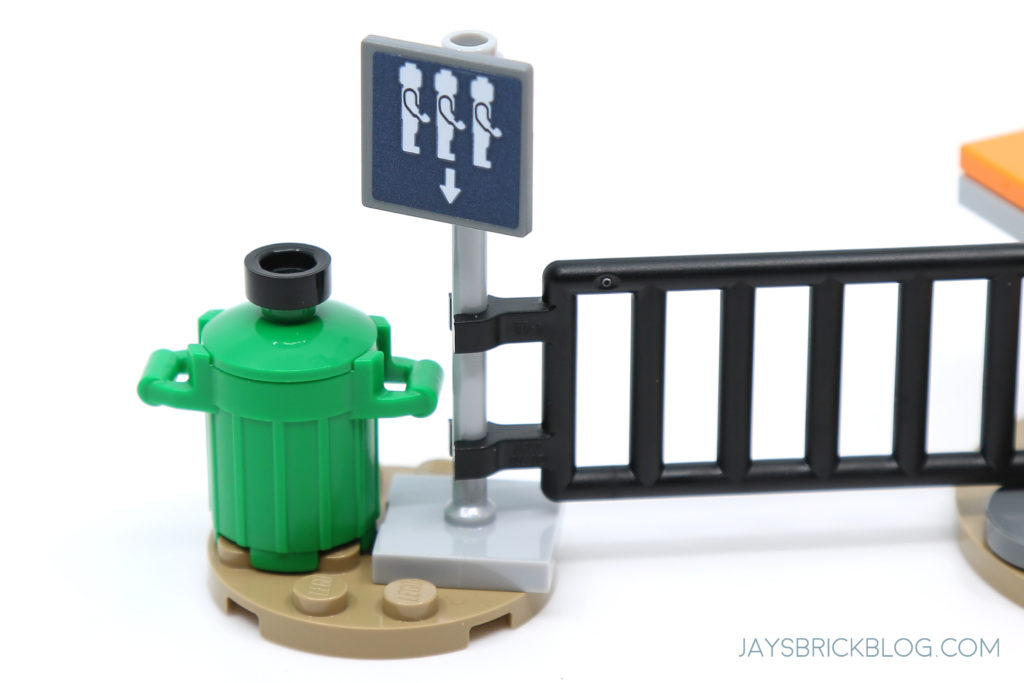 There’s a waiting area with two fences, where park visitors can queue up to get on the ride.

It’s pretty basic, but there are some nice elements such as a green bin, a sign indicating where minifgures should line up, and an orange platform for people to get on the ride.

At the end of the fence is a signboard with directions to different parts of Jurassic World, which is another neat touch, that makes this section more than just a bunch of random elements. 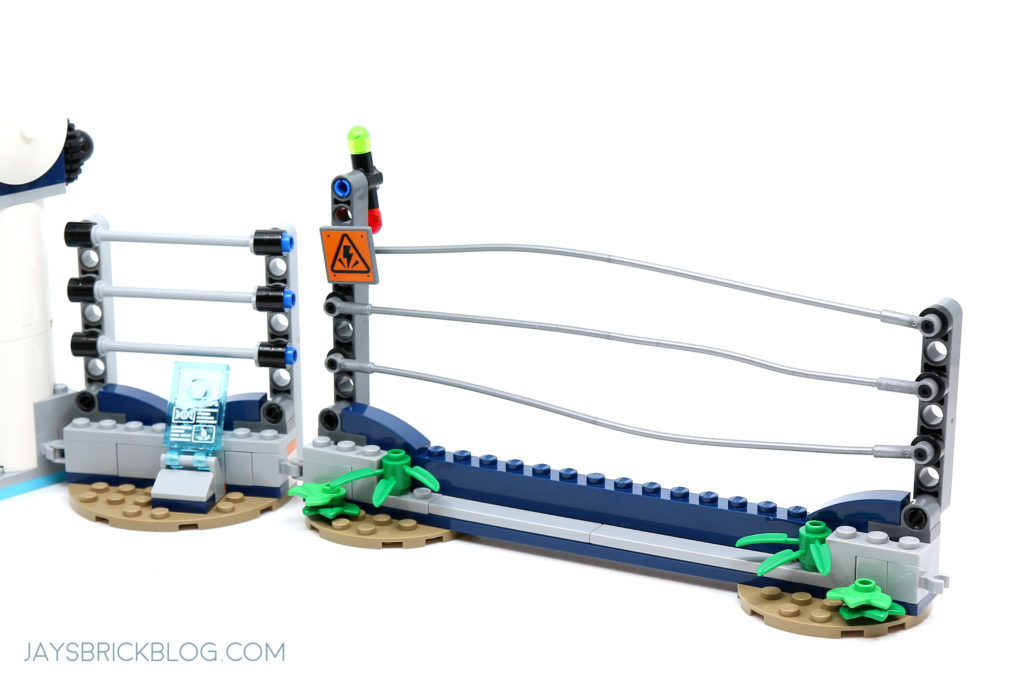 Here’s a look at the electric fence section, that prevents the Triceratops from trampling all over poor Jurassic World visitors. At least while it’s up.

It’s pretty basic, but uses these new flexible rods for the main fence section, which can bend into different shapes, but as a result, don’t look rigid at all which creates this weird warpy look, which kind of bugs me. 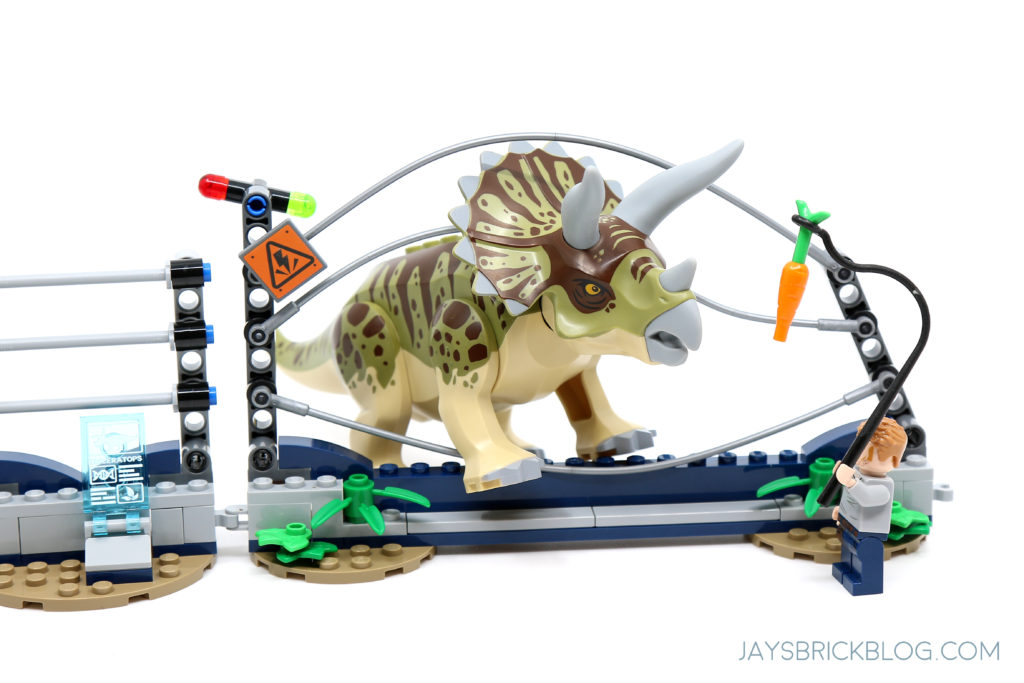 What this does is allow you to collapse the sides of the fence, which creates this beautiful scene where the Triceratops completely destroys the wires and comes crashing through the electric fence.

Here the rubbery rods do an amazing work creating a believable scene, and this really should be the default way you display this part of the set. Visually, it looks so damn good. 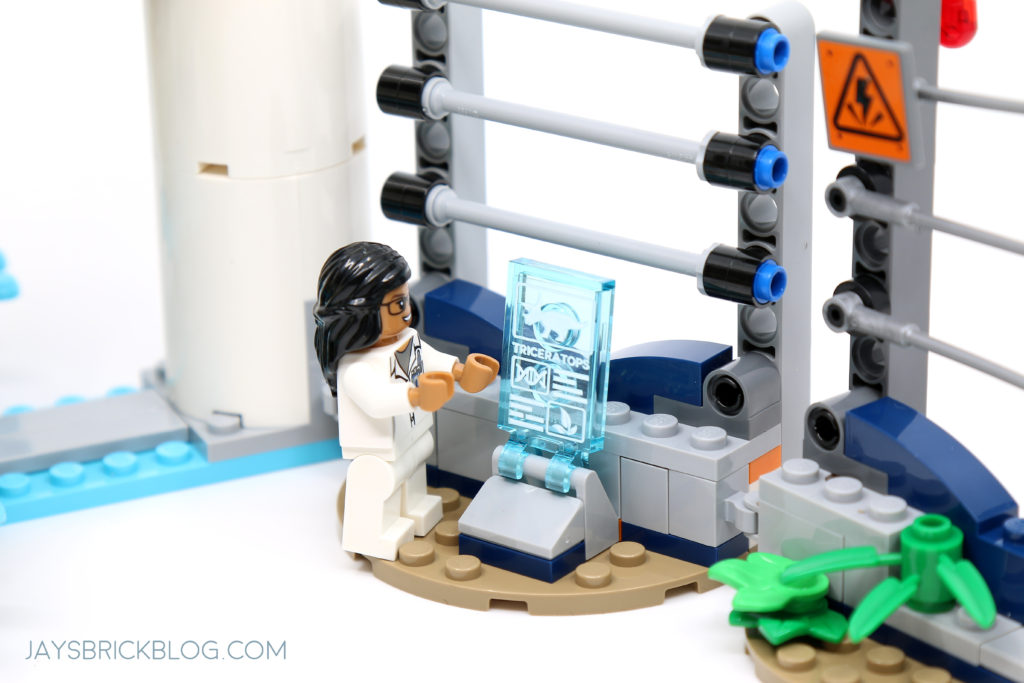 Next to the electric fence is transparent blue panel with information on the Triceratops, it’s DNA makeup, and its diet. 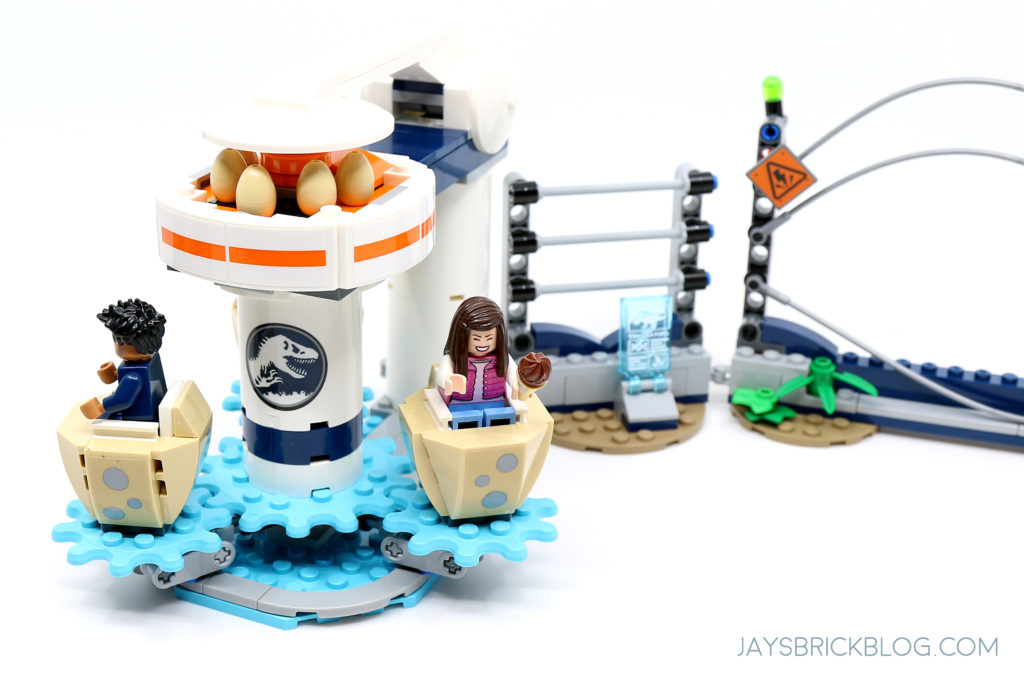 The centrepiece of the build is the Egg Spinner ride, a carnival-type attraction.

The Egg Ride has three dinosaur egg seats that minifigures can sit in, and using a dial, you can rotate to bring the ride to life.

Here’s a GIF of it in action. The mechanism works particularly well, and the entire operation runs very smoothly. I also love that they managed to get the Dino Egg seats to also rotate as the entire ride rotates. 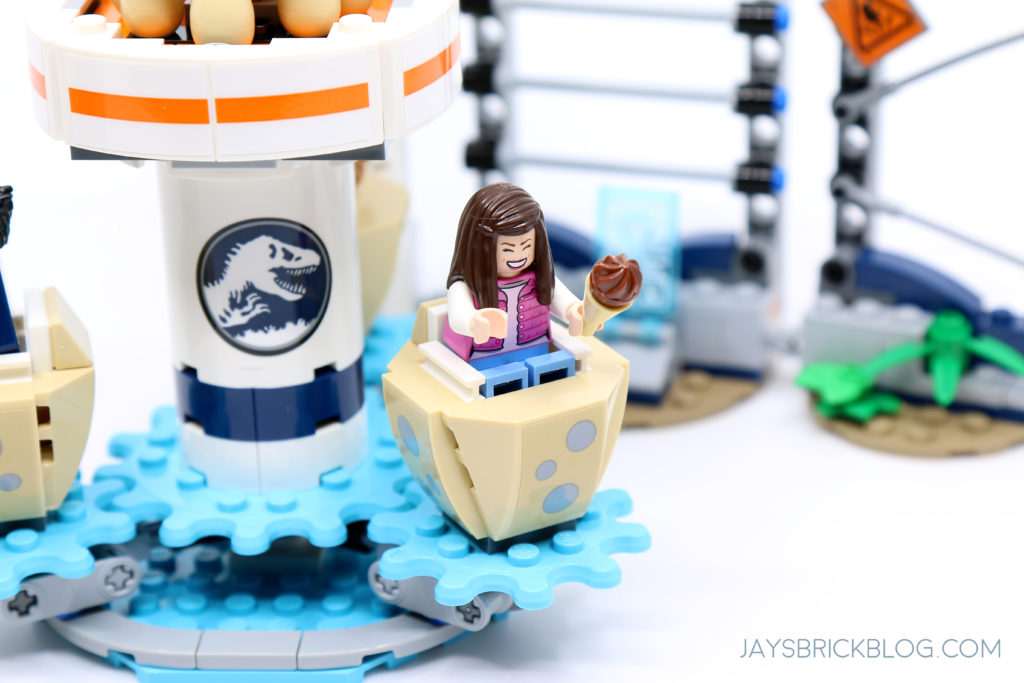 The Jurassic World tourist seems to be having the time of her life.

The Dinosaur Egg seats have stickers on all sides, which are a nice bit of extra detail. 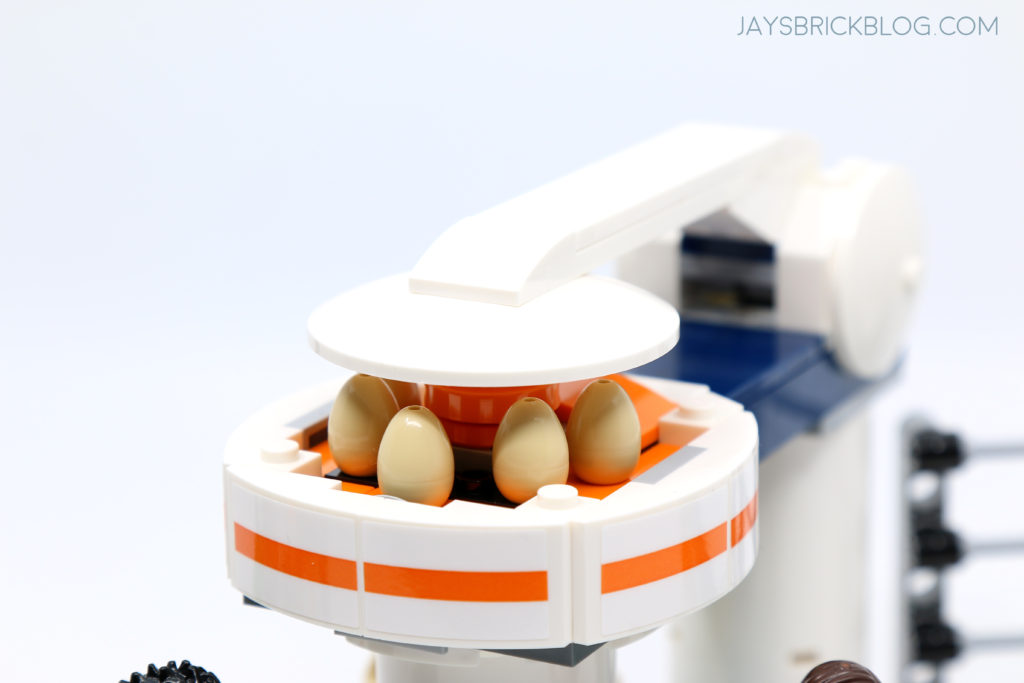 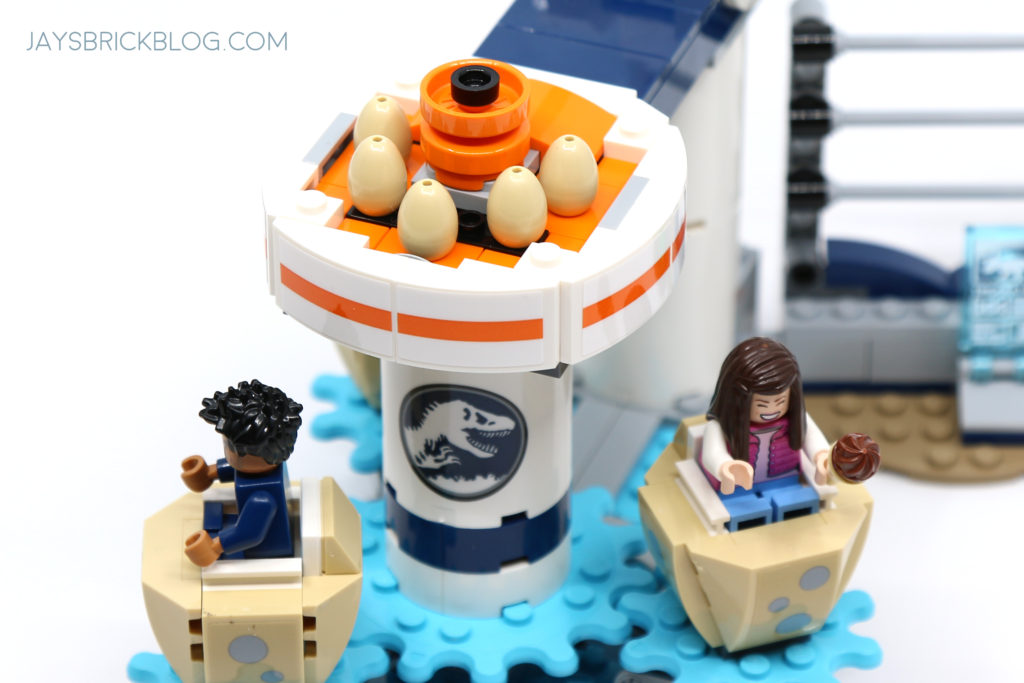 Above the ride is a clutch of dinosaur eggs, which appear in tan for the time first (I believe).

In a callout to the movies, it’s made to look like the incubators that the dinos in the park are hatched in. You can even lift up the “lid” to reveal the entire clutch of eggs.

Final thoughts: The danger with any set involving dinosaurs is that you often feel that you’re really just buying the set for the dinosaur, and any bricks or models included are mere afterthoughts – but this set bucks the trend. 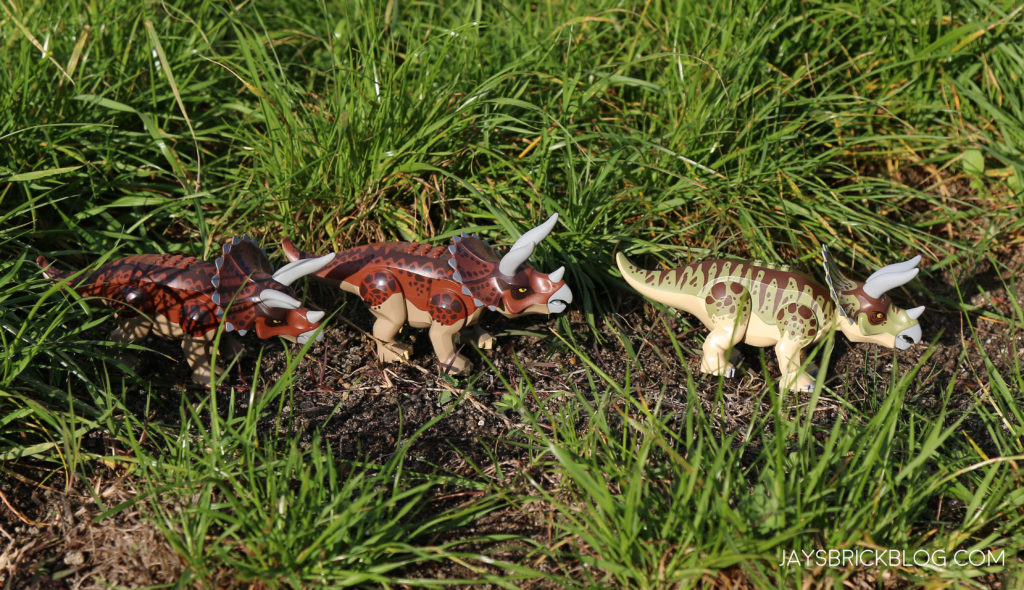 The new 2019 LEGO Triceratops is brilliant, and I’m glad that LEGO decided to give is a fresh new coat of paint to differentiate it from its 2012 cousins, making this set a must-buy if you collect LEGO dinosaurs.

The brighter colour scheme does give the Triceratops a bit of an exotic, otherworldly vibe to it, which I kinda like.

But yeah, I’m just glad that LEGO Triceratopses are easily available again for those that didn’t get the chance to own the original.

The minifigures were perhaps the biggest surprise for me as I really liked all of them, thanks to their fresh new expressions.

I’m glad that LEGO are stepping away from their formulaic neutral + angry offerings, to give minifigures more distinct expressions to suit the scenes that they’re placed in.

The rest of the build is also pretty good, you get some good variety with the electric fence, ATV and the Egg-Spinner ride.

I do like that they didn’t opt to give us a massive vehicle, and you actually get some structures as they make for a better display option, as you can set up all sorts of scenes with the Triceratops, Owen Grady and the tourist, which can be lots of fun for all ages. 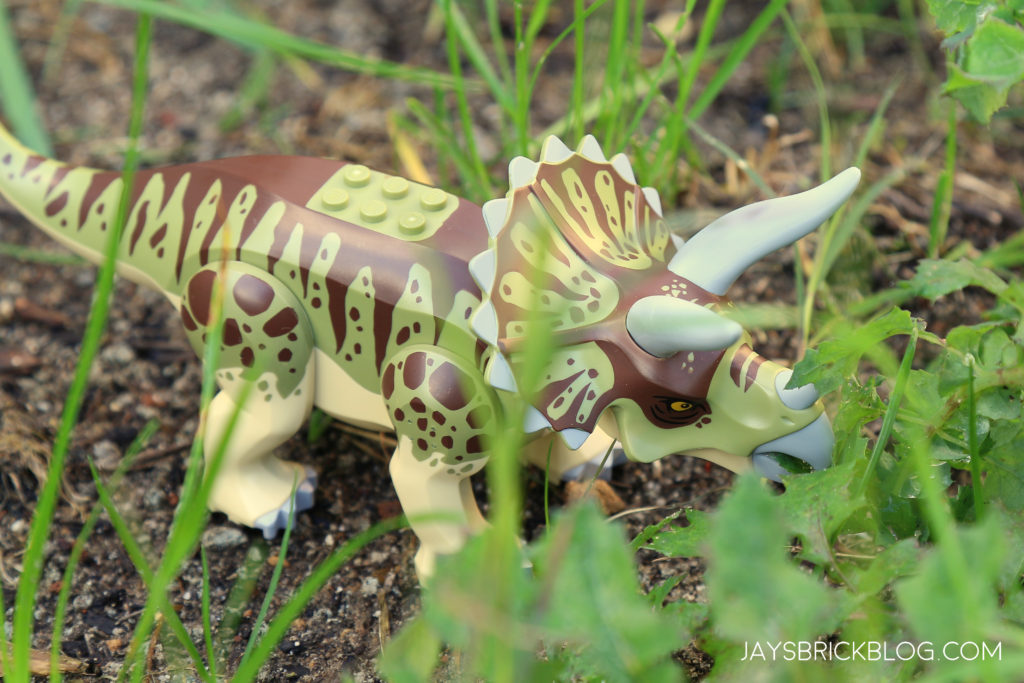 I came into this set fearing the worst, as previous Dinosaur sets have always felt like extremely poor value but after putting all the elements together, I have to say that I was quite surprised at how much is packed into it.

While yes, the pricetag is still very much on the higher end of the scale for a low piece count set, but you’re getting a lot of plastic in that LEGO Triceratops.

As my first foray into the new Jurassic World Legend of Isla Nublar set, I have to say that I was quite pleased with this one, and can happily recommend the set, especially if you’re open to waiting on it to go on sale.

Thanks for reading! Hope you enjoyed the review! I have a few more sets from the 2019 Jurassic World theme to get to, so keep an eye out for those!

As always, be sure to let me know what you think of this set down in the comments and if you’re planning to pick this one up when it launches. 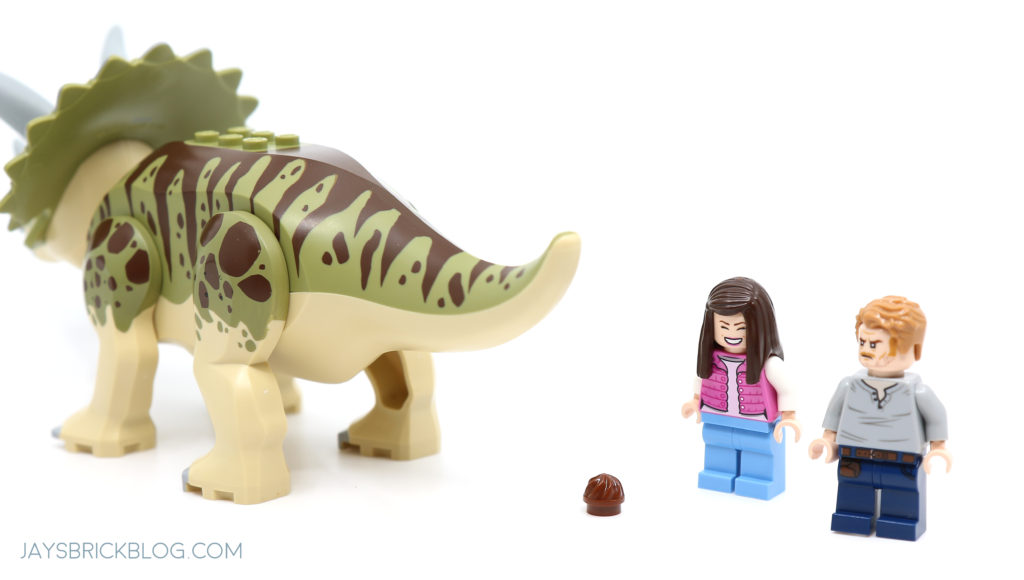 I’ll leave you with this photo of the LEGO Triceratops making a bit of a mess.