We’re well into the second half of 2019, which is when LEGO typically pulls out their big guns for the year, which includes the second wave of the Wizarding World of Harry Potter sets.

I’m really keen to dig into all the new Harry Potter sets soon, but I’ll start my series of reviews with one of the most anticipated and accessible sets – 75945 Expecto Patronum, which is also the smallest set in the wave.

We’re lucky enough to be in Australia where the new 2019 Harry Potter sets launched in June, but for those of you in the USA, you’ll have to wait till 1 July 2019 for them to be released.

This review is a collaboration with Build & Play, they’re an Australian online LEGO retailer run by upstanding people. Most of my H2 2019 sets have been purchased from them, including a few of the new Harry Potter sets, which are priced very competitively. 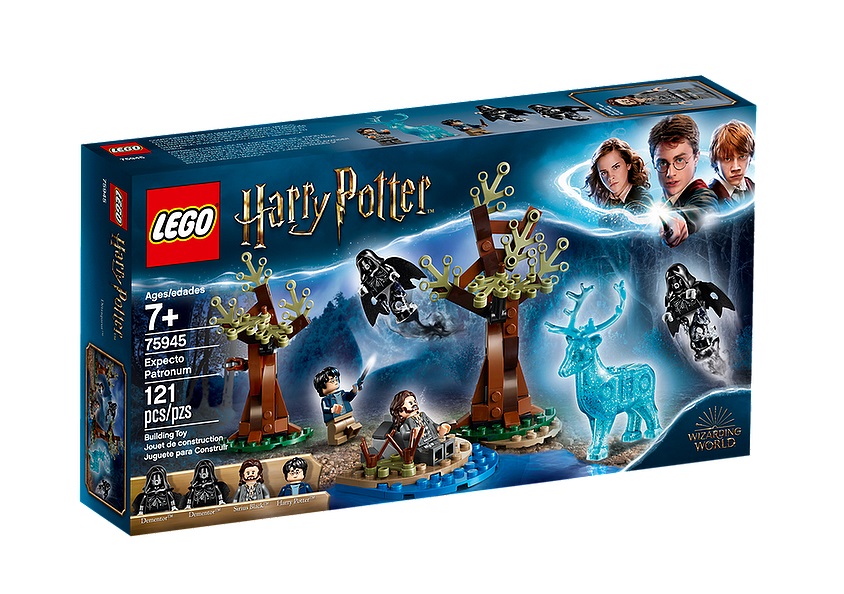 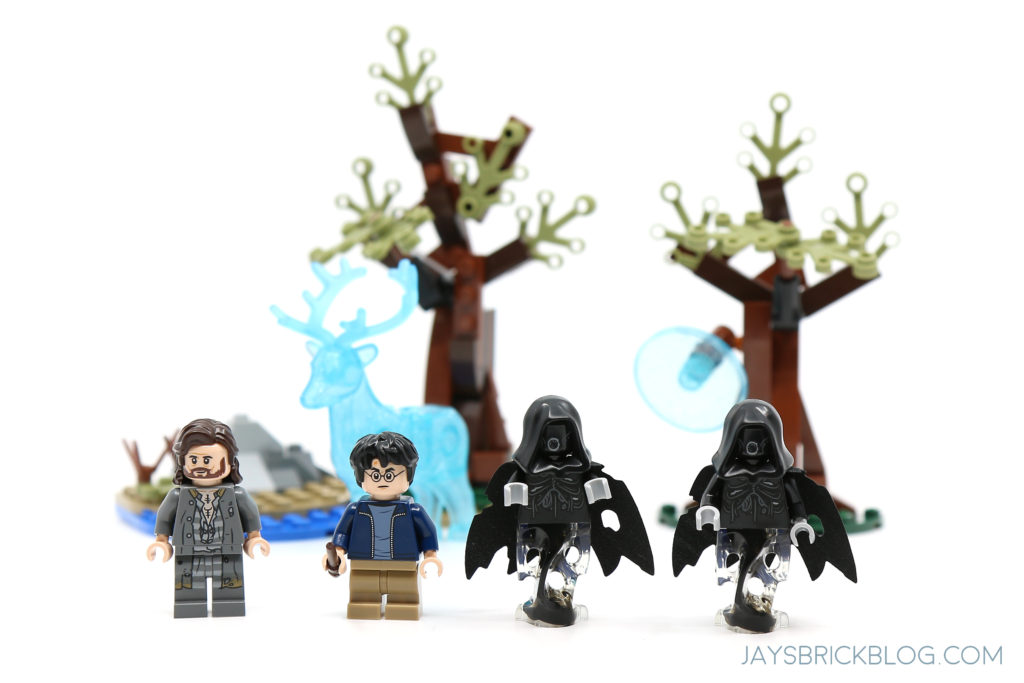 At first glance, 75945 Expecto Patronum might seem like a glorified minifigure pack, and in many ways, it totally is, but it doesn’t feel like your typical Marvel or Star Wars cash-grab set.

The set’s name is a reference to the Patronus charm, which was introduced in the third book, Harry Potter and the Prisoner of Azkaban.

It’s a particularly tricky defensive charm to ward off Dementors, relying on the wizard or witch to recall a particularly happy memory to counteract the Dementor’s soul and joy-sucking nature.

The set depicts a moment in the books and movies, where Harry saves Sirius’ life by successfully casting a Patronus Charm, with some time travelling shenanigans thrown in for good measure.

There are 4 minifigures in the set, including the much anticipated Sirius Black minifigure, Harry Potter and of course Harry’s Stag Patronus. Two Dementor minifigs round out the set, and are very welcome as you can never have enough of these soul-sucking spectres in your Harry Potter collection. 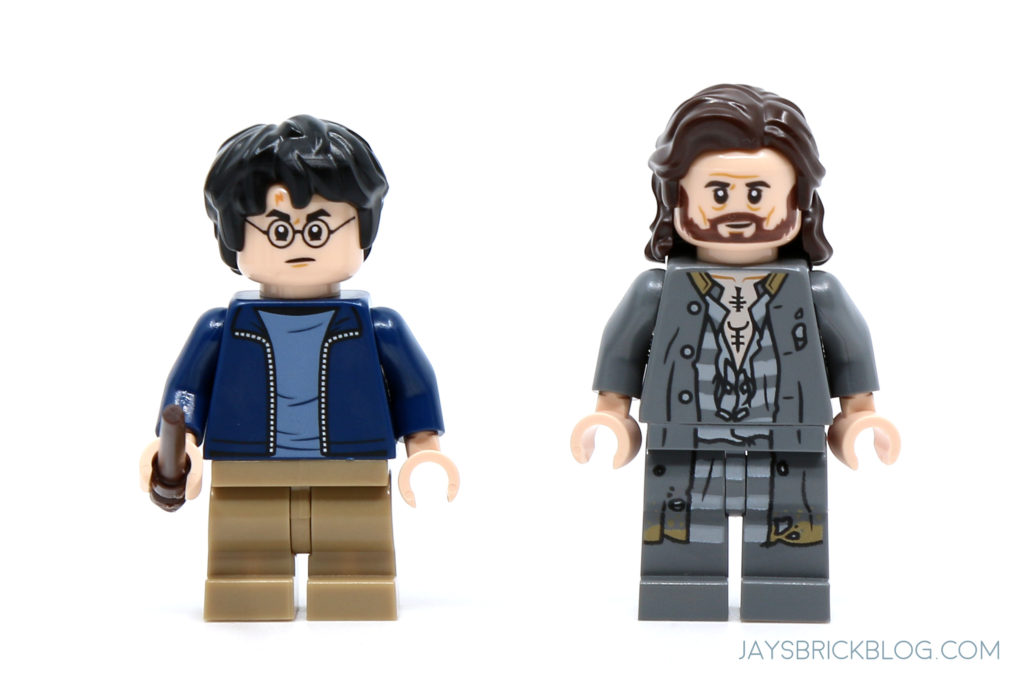 Here’s a look at the Harry Potter and Sirius Black minifigures. Harry is dressed up in a casual navy zip jacket and tan trousers. His outfit is pretty accurate to the movie version which is a big plus for those into getting the details right.

Harry comes with the now-standard Daniel Radcliffe hairpiece which has volumes of texture, that also allows his lightning scar to peek through.

Sirius Black is the star of the set, with this being only his second outing as a LEGO minifigure, and a vast upgrade to the original 2004 version. The 15 year wait has been worth it as I’m really happy with the minifig design.

Sirius’ facial features are pretty spot-on, with his rugged and slightly unkempt facial hair, wild shoulder-length hair and kind, almost-fatherly eyes tying it all together.

His tattered Azakaban robes are also remarkably accurate to the movie costume, and it’s really cool to see Sirius’ tattoos (a movie thing) on his chest. I also love the small details such as the brown/faded bits on the edges of his coat. Here’s Harry’s smiling face, and a look at Sirius Black’s alternate angry look. You can also see more distressed details on the back of his coat. 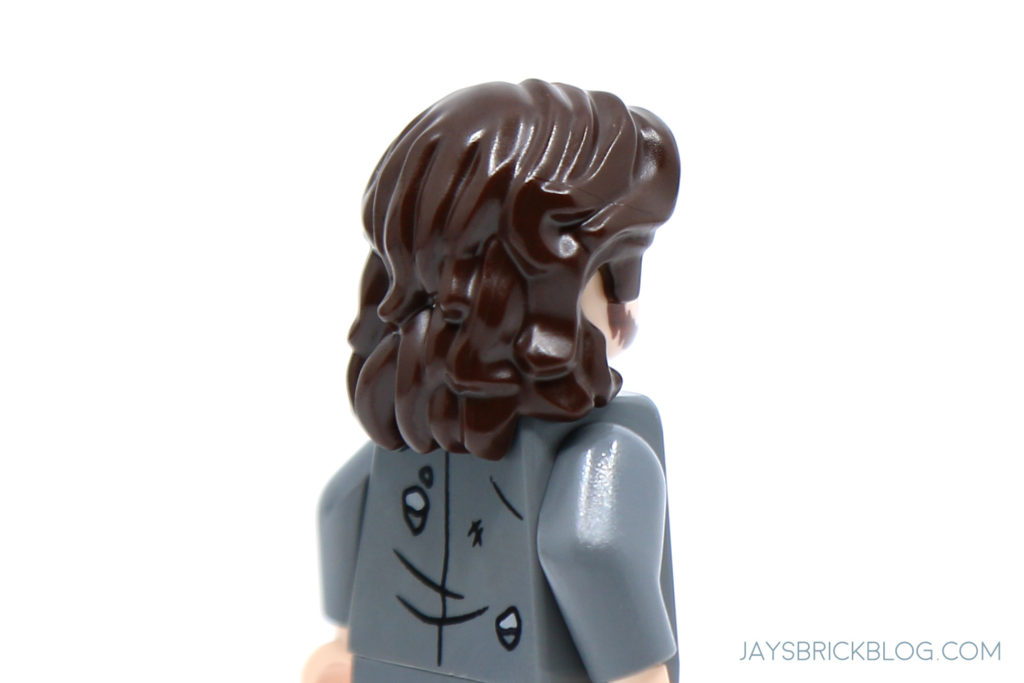 Special mention to Sirius Black’s hairpiece, which is ridiculously detailed with texture. It’s new to this dark brown shade, and previously has been used for Luke’s hairpiece in the Ahch-To Island Training set. 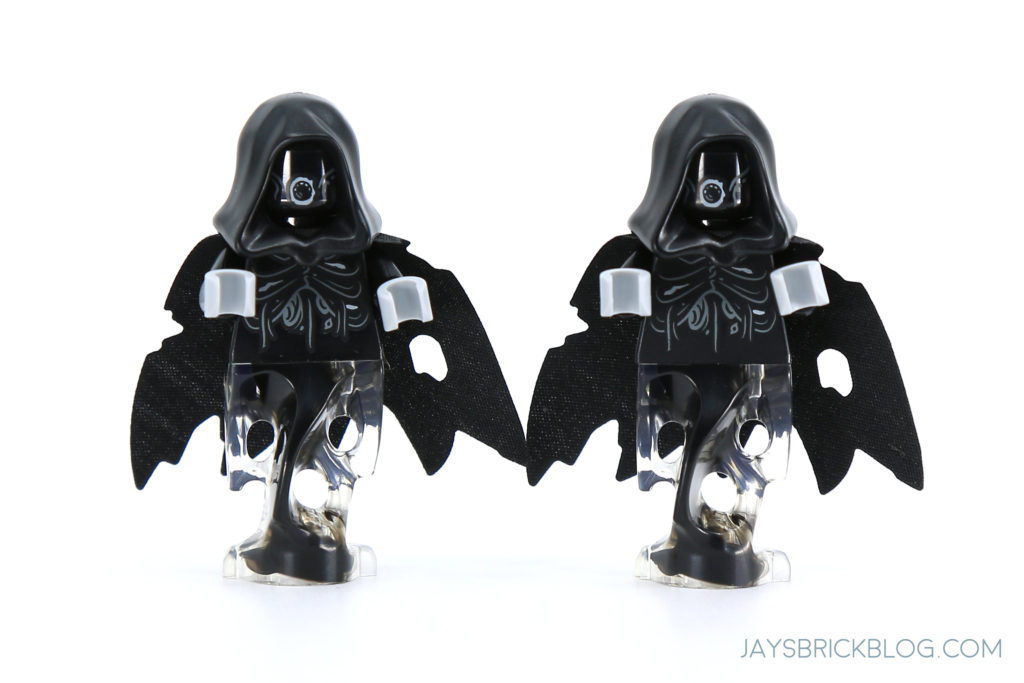 Here are the two Dementor minifigures included in the set, which are great for a relatively affordable set. They were previously only available in the Hogwarts Express set and I’m a big fan of their designs, with their detailed printed torsos and “Spectre feet” and their large tattered black capes. 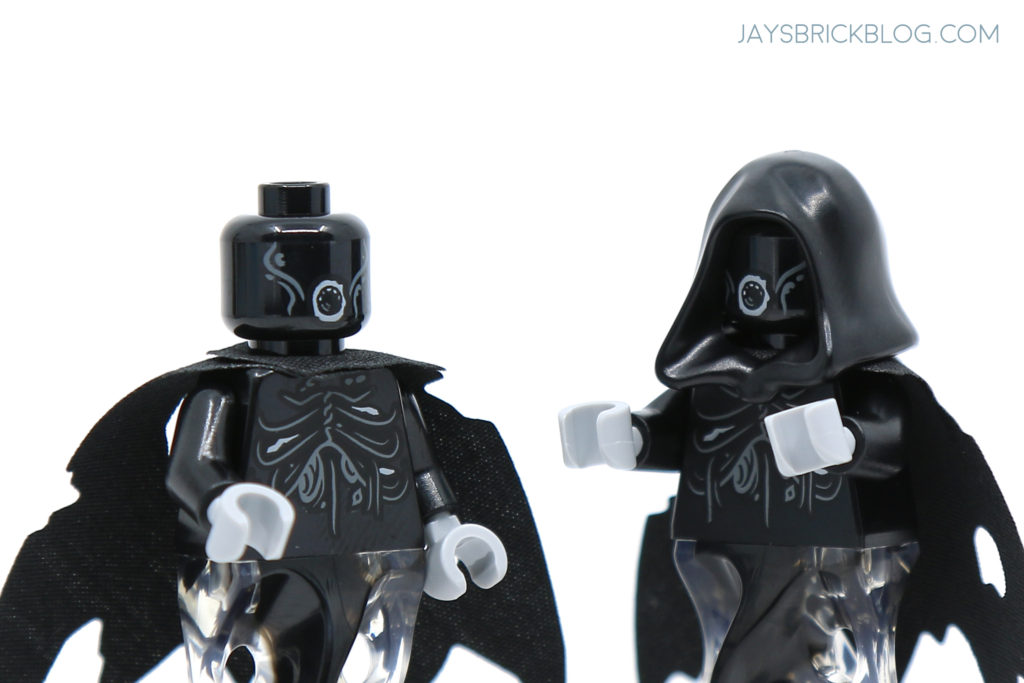 Here’s a better look at the Dementor’s face, with their creepy gaping mouths which is the last thing you see before a Dementor’s Kiss is performed, and your soul gets sucked out of your body. ? 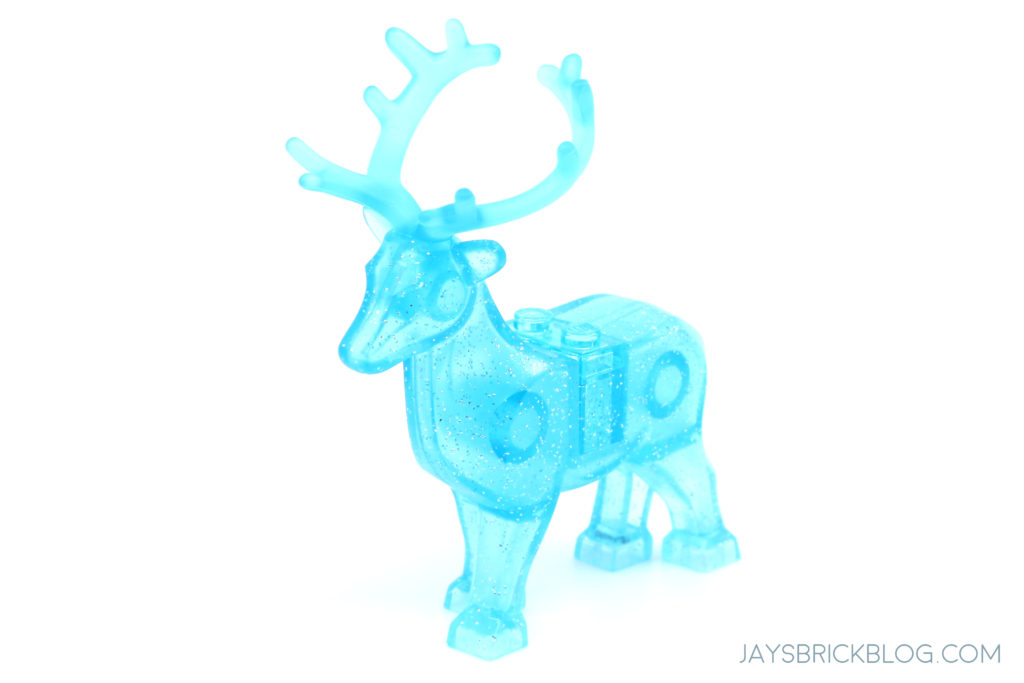 The highlight of the set, and what makes this a must-buy for any LEGO Harry Potter fan – a beautiful, sparkly trans-blue Stag Patronus!

When this set was announced, I didn’t think most fans expected to see LEGO produce a full-sized Patronus, and in a whole new stag animal mould as well. 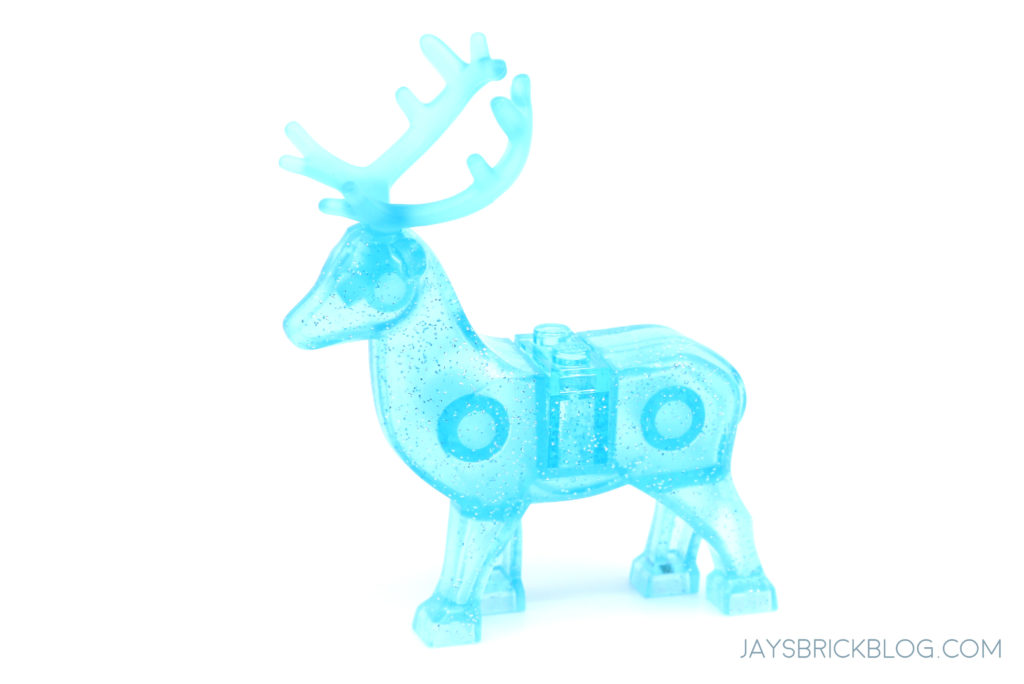 There’s just something extra special about transparent LEGO elements, and I love how there are sparkly bits in it, to give it an extra magical vibe.

The stag is stunning, and I was surprised that the antlers were made of soft rubbery plastic, and can be wobbled around fairly easily. 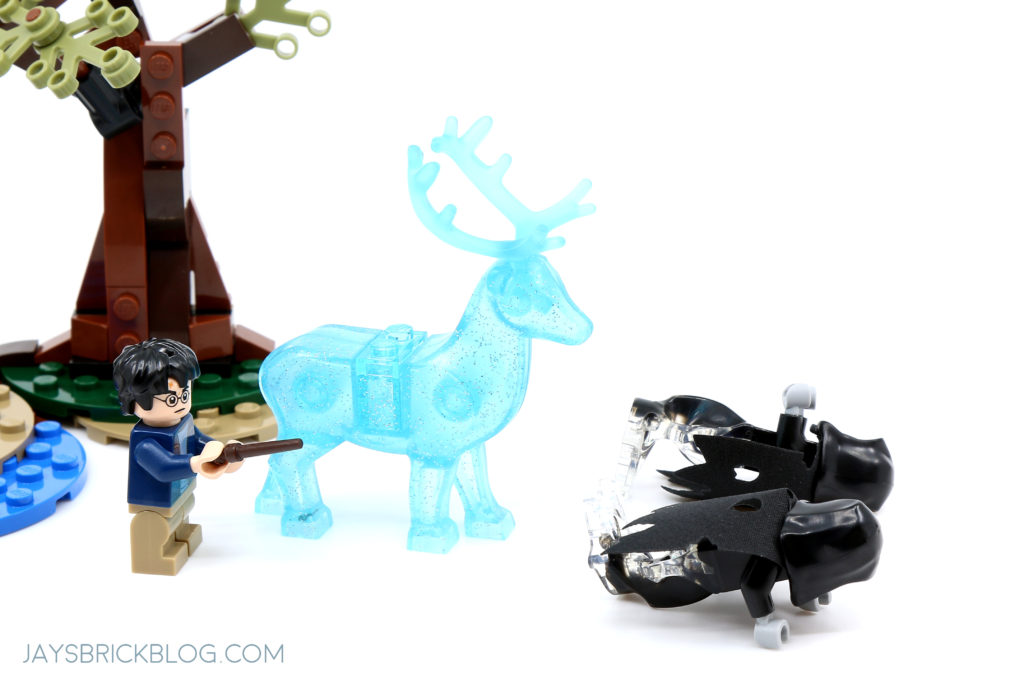 As a standalone piece, I’m very, very surprised that LEGO would place it in the cheapest 2019 Harry Potter set, which is a very positive fan-first move.

They could’ve popped it into the most expensive set, like what they tend to do with LEGO City Animals, and most fans would probably still go gaga over the Stag Patronus, but it just makes me so happy to see such an incredible Harry Potter element in such an accessible set. 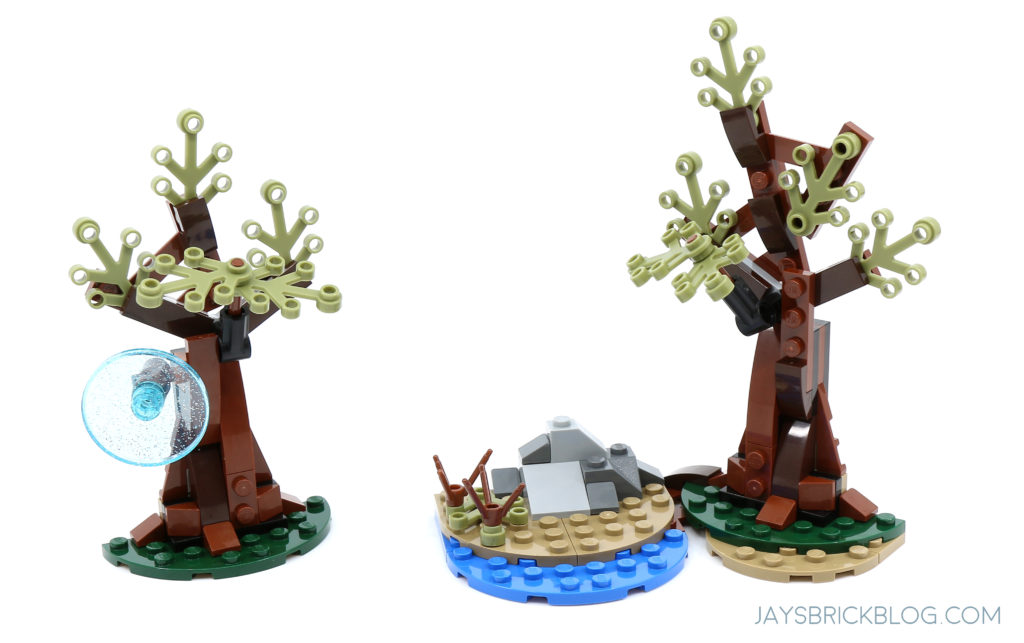 The rest of the set is pretty sparse, but all things considered, not too shabby for a AU$30/US$20 set. You get two brick-built trees which I admit, were a lot more fun than I had expected.

The two trees give the set a sense of place, and does well to setup plenty of different scenes for the minifigures. 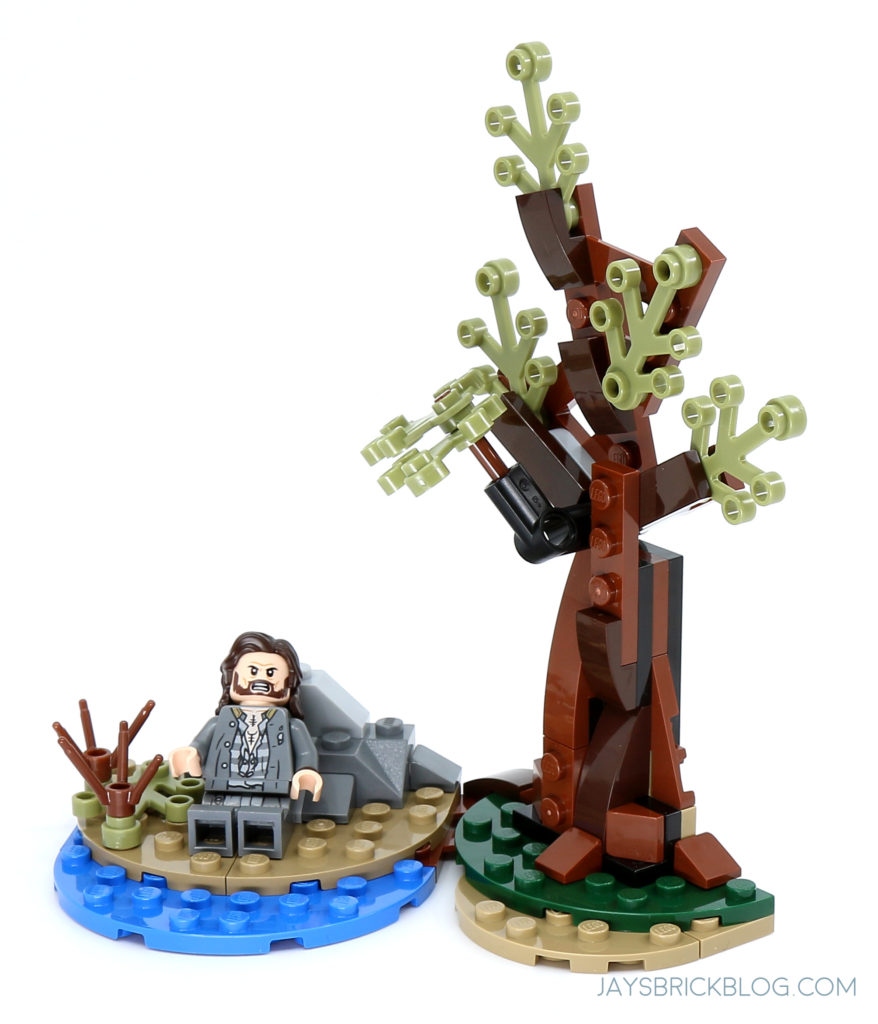 The trees in particular were very fun to build, as they are constructed flat/horizontally before being hoisted upwards and attached to the base which was a very fun surprise.

The build technique makes the trees look rather different from traditional tree-building methods, which involve arches and slopes, and as a result the trees look much narrower yet with more detailed textures for the trunk.

LEGO were also very generous with the foliage with 12 leaf pieces, and even the brown flower terms on the ground, making it look quite lush indeed. 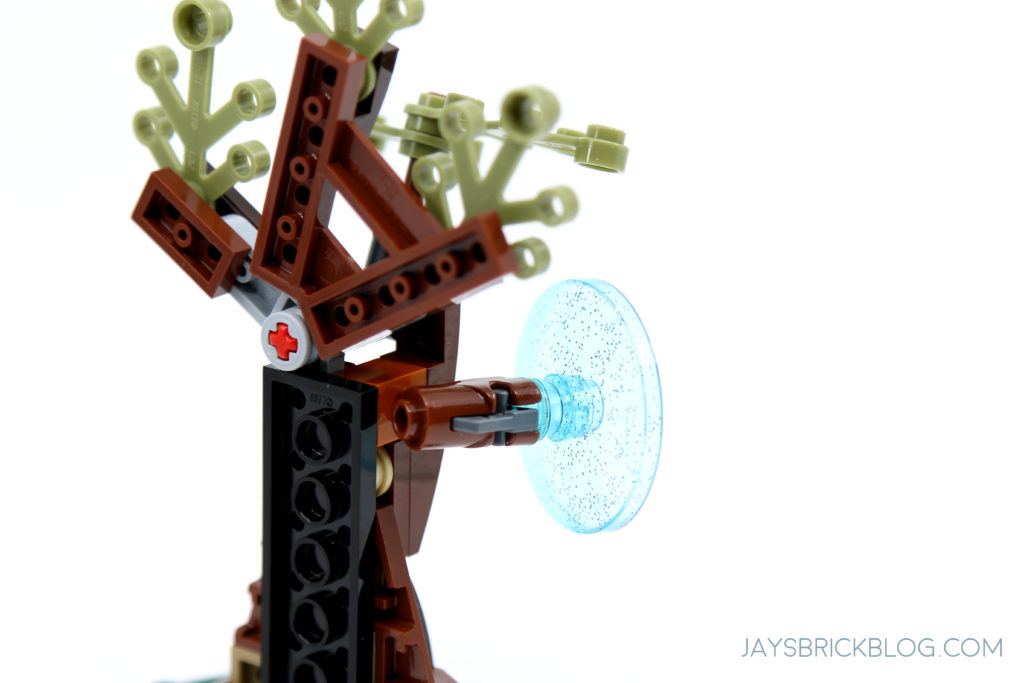 Attached to one of the trees is a stud blaster, which is attached to a speckly blue dish, to simulate the Patronus Charm blast.

Normally, I’m not a big fan of stud blaster play functions as they can be quite gimmicky, but the dish is a pretty large projectile and you can aim it and knock out a Dementor or two with ease. 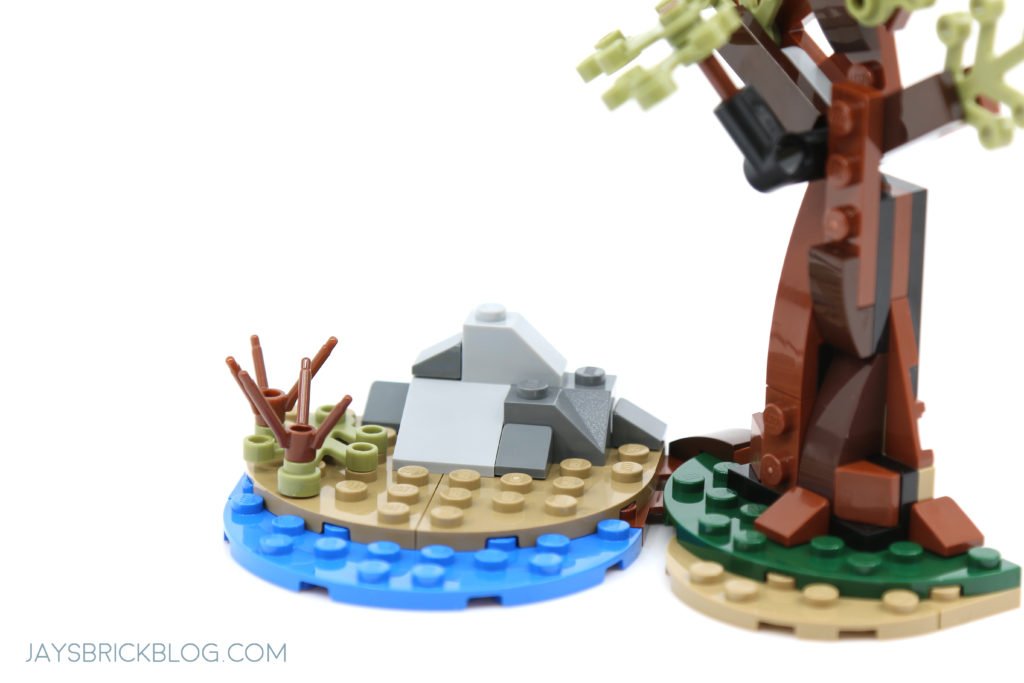 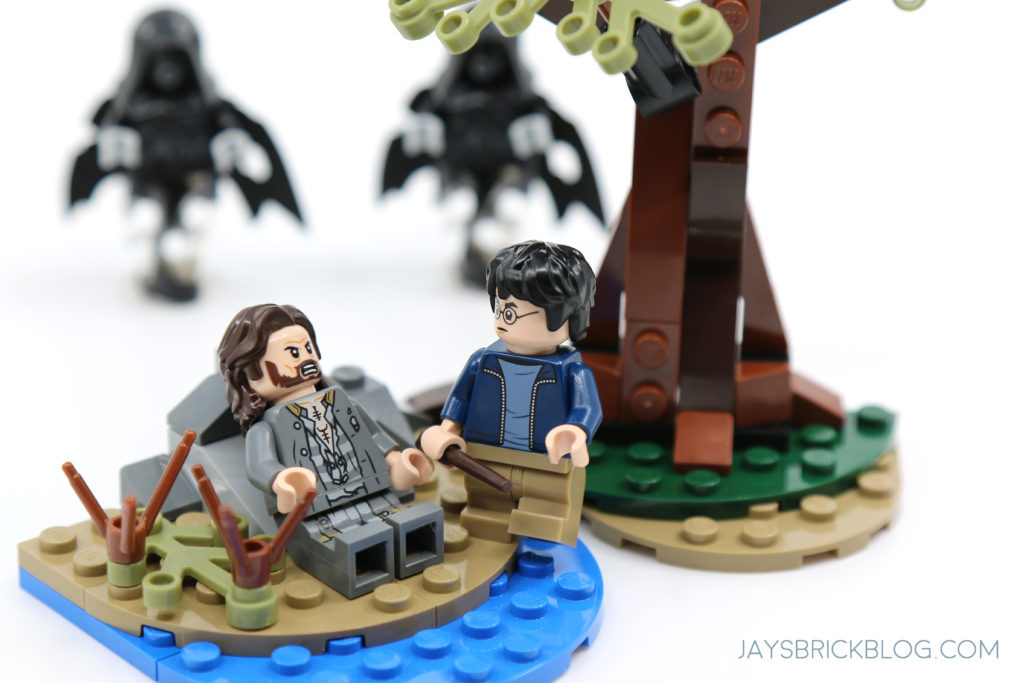 There’s also a small rocky section, with place for Sirius to lie down, while Dementors hover menacingly in the background.

Again, the accuracy of the set can be really commended, as there’s a bit of water where he lies down, which matches the Patronus scene that occurs next to a lake.

Now for accuracy sake, it would be really brilliant if LEGO had included another Harry Potter minifigure (from time-travelling shenanigans) but that’s just being greedy on my part! 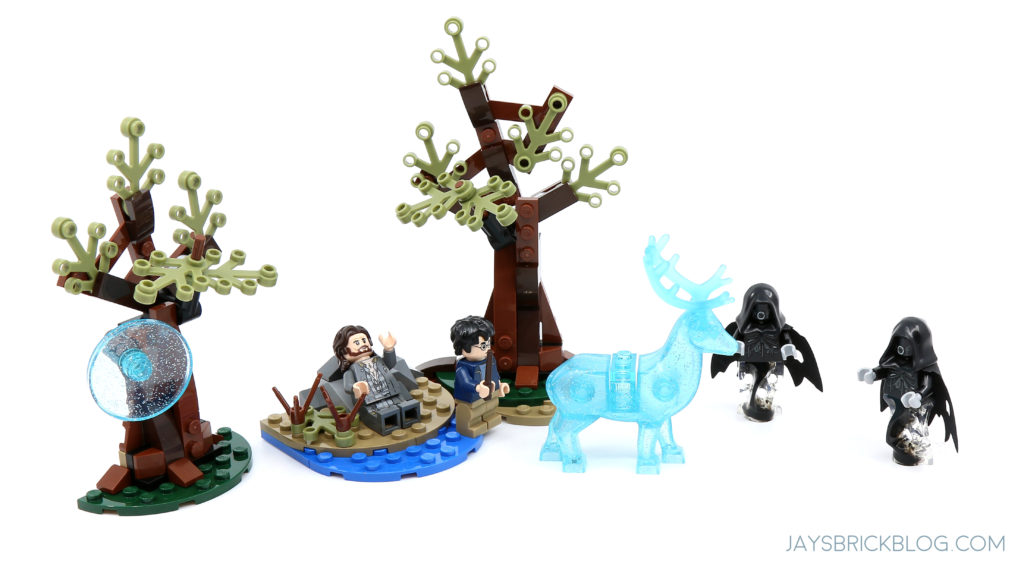 Final thoughts: This is such an easy set to like, and LEGO nailed pretty much every single part of the Expecto Patronum set.

You get 4 minifigures, of which none feel like fillers. Sirius Black is the star, making his first appearance after 15 long years. For a fan favourite character (I’m still salty about his death, after all this time), this makes it almost a must-buy for any LEGO Harry Potter fan, and I’m really glad at how well the minifig design is.

Harry is Harry, but the movie-accurate outfit is a very nice touch. The two Dementors are also amazing inclusions, especially for a set at this price range.

The Patronus is also outstanding, and yet another wonderful addition from the Harry Potter universe into the LEGO Harry Potter world. The design is inspired, and it makes me really excited to see this stag mould being used in other sets.

The build, while looking deceptively simple was actually a pretty fun experience thanks to the creative way the trees are designed.

All in all, this is a very tight set that excels from every single angle. Great minifigures, exciting new elements, brick-built elements that accentuate the context of the set – all wrapped up in a pretty affordable package.

It’s one of the no-brainer must-buy sets, especially if you’re a fan of LEGO Harry Potter. Even at full price, but of course, it’s always a much nicer feeling if you can get it below RRP.

Actually, if you’re a LEGO Harry Potter fan, you’ve probably already made up your mind to buy this set once you saw the Stag Patronus and Sirius Black minifigures!

Sets like these just make me so happy. The kind of happiness that I could probably use to conjure my own Patronus if only I wasn’t a lousy Muggle!

Thanks for reading! Hope you enjoyed the review! I’ll hopefully be able to cover more of the new Harry Potter sets in the coming few weeks, so please keep a lookout for them.

75945 Expecto Patronum is now available on LEGO.com or Amazon Australia if you’re in Australia or Europe, but if you’re in the US, you’ll have to wait till July to pick the set up.

As always, be sure to let me know what you think of this set down in the comments!