The second half of 2020 brings yet another wave of LEGO Harry Potter sets, and one of the most interesting sets in this drop is LEGO 75979 Hedwig.

Hedwig was Harry’s pet Snowy Owl, gifted to him by Hagrid on his 11th birthday and was one of his closest companions, until she was unceremoniously blasted from the sky in cold blood by a Death Eater. It’s been years since her death, and I am still pissed off about it till this day.

Anyway, the LEGO Hedwig is one of the most interesting sets released by LEGO in 2020 – immortalising the beloved owl in the form of a brick-built sculpture. 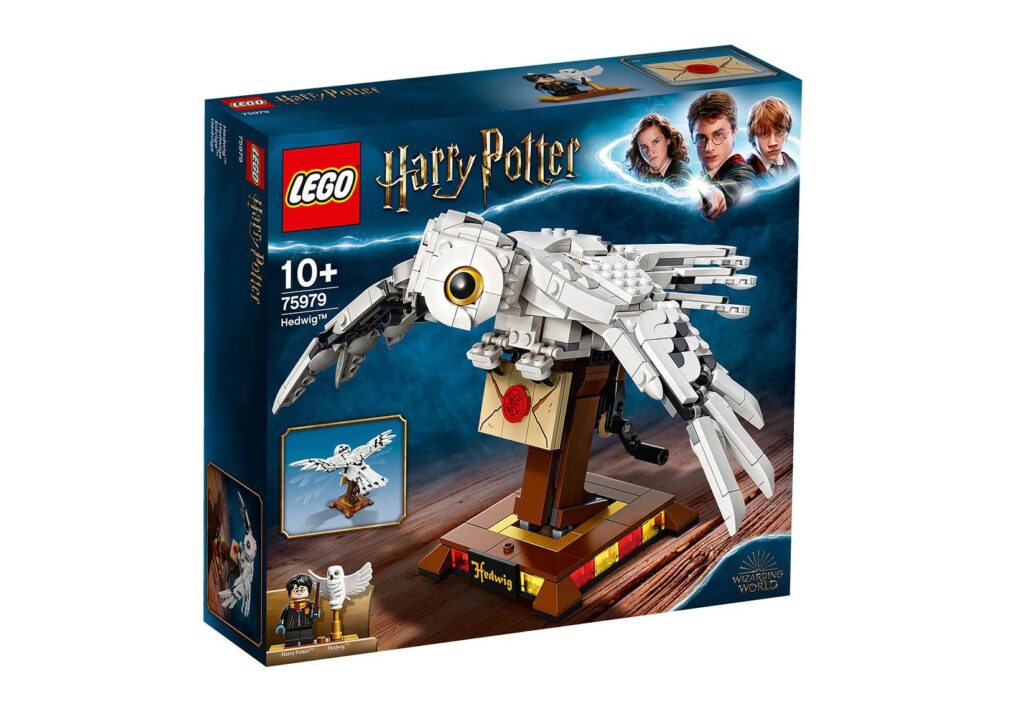 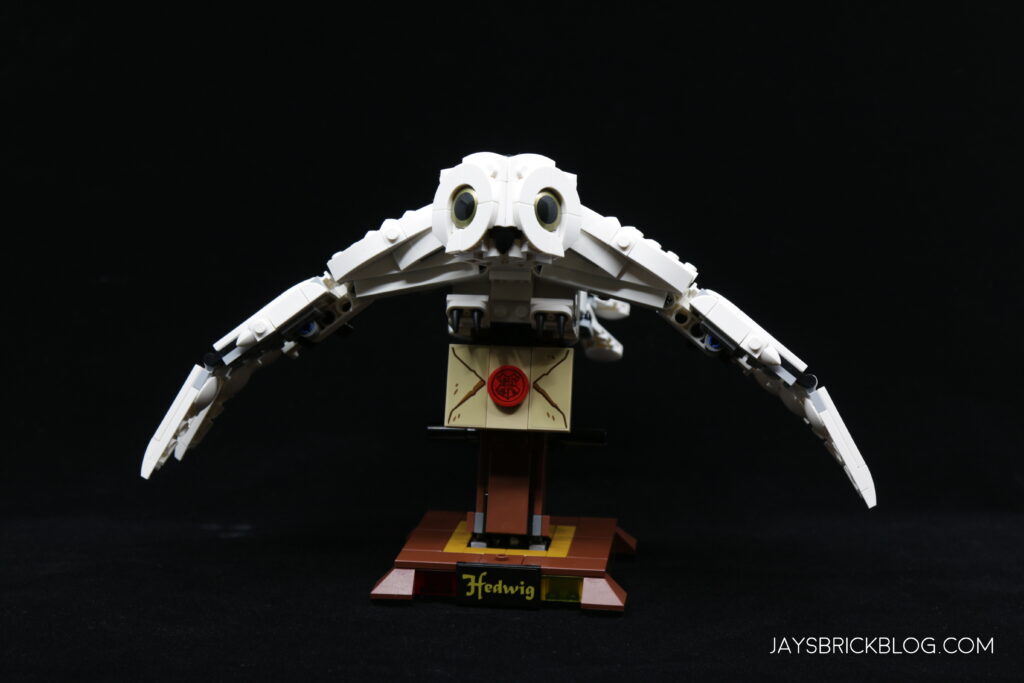 One of the nice surprises of 2020 has been LEGO thinking outside the box and creating all sorts of novel play and build experiences in retail sets, and Hedwig is certainly one of them.

In addition to being a really eye-catching LEGO model, Hedwig’s wings can gracefully flap up and down thanks to the mechanical insides, where you can turn a crank to make him move her wings.

Building Hedwig was a really enjoyable affair – it combined the rare experience of building a LEGO animal sculpture, with that of a kinetic sculpture, and never once felt repetitive or boring. 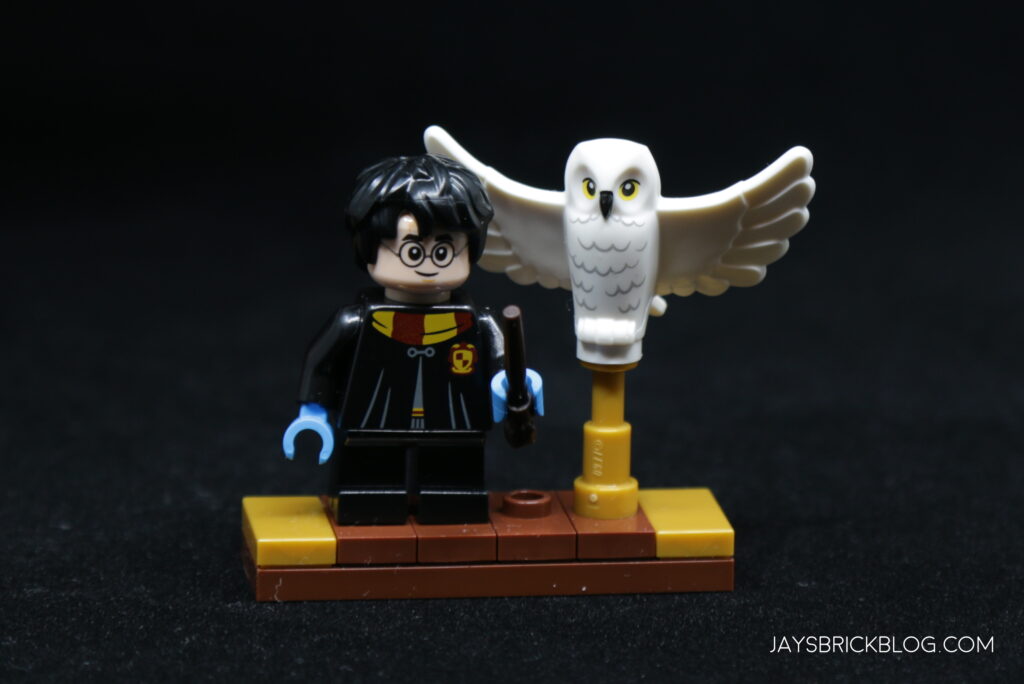 The set comes with one minifigure – a young Harry Potter from the Philosopher’s Stone, and the new 2020 Hedwig owl with outstretched wings. 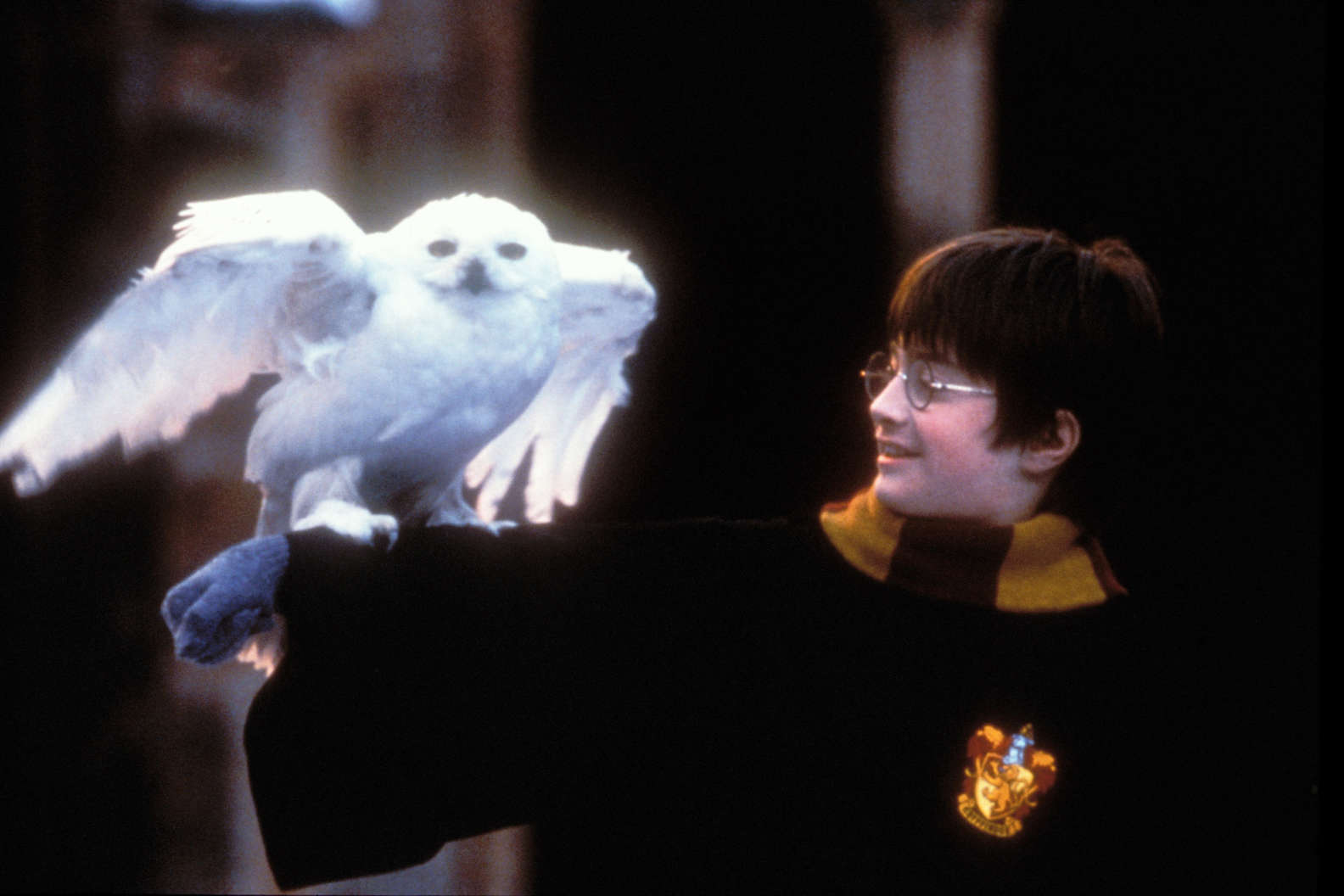 The Harry Potter minifigure features blue gloves and a Gryffindor scarf, and references this iconic shot from the first movie where Hedwig perches on his arm. 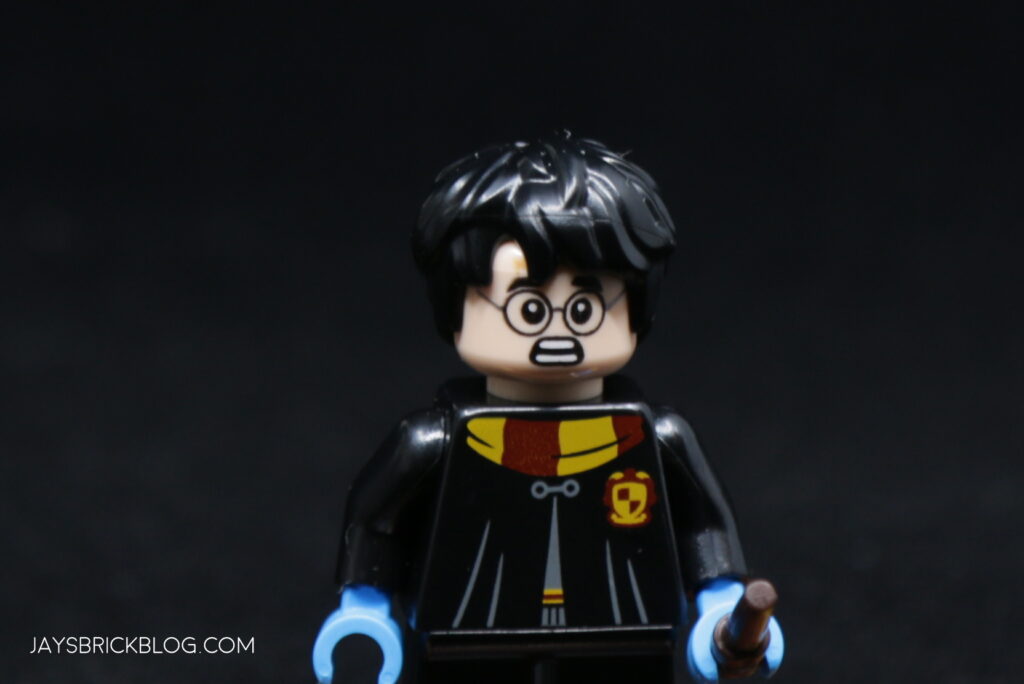 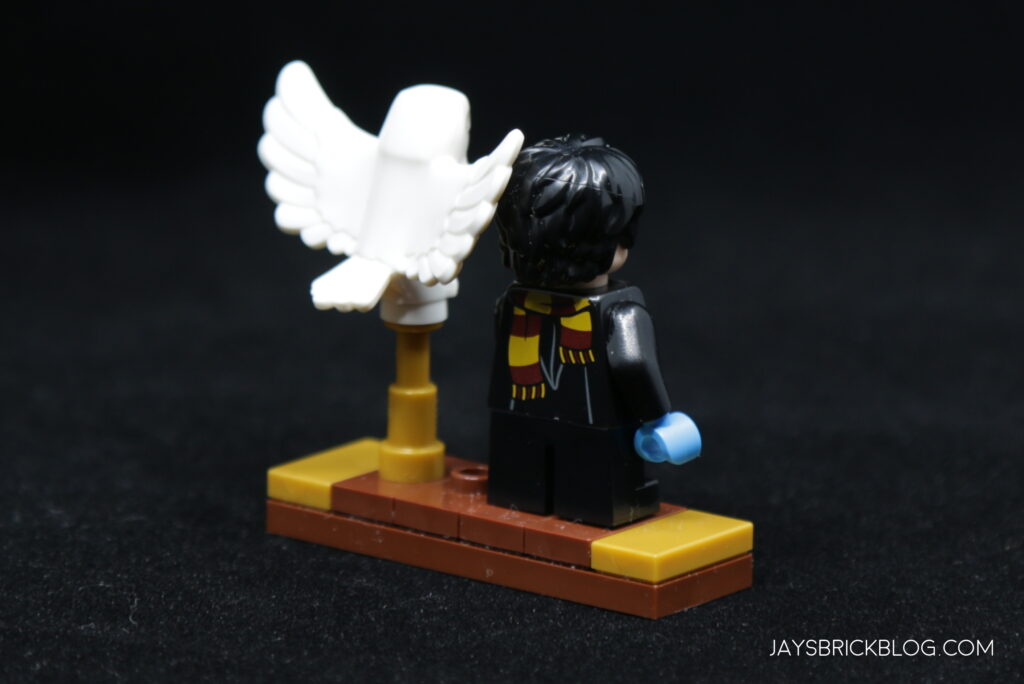 Here’s a look at Harry’s back printing. 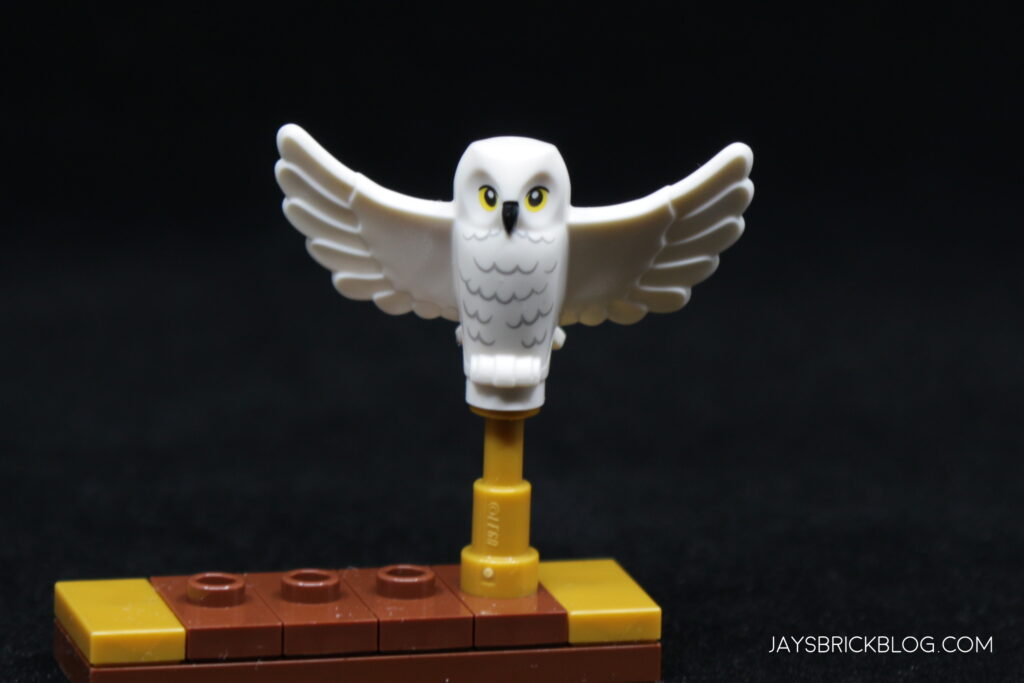 The new LEGO Hedwig piece is a nice little bonus to those purchasing the set. 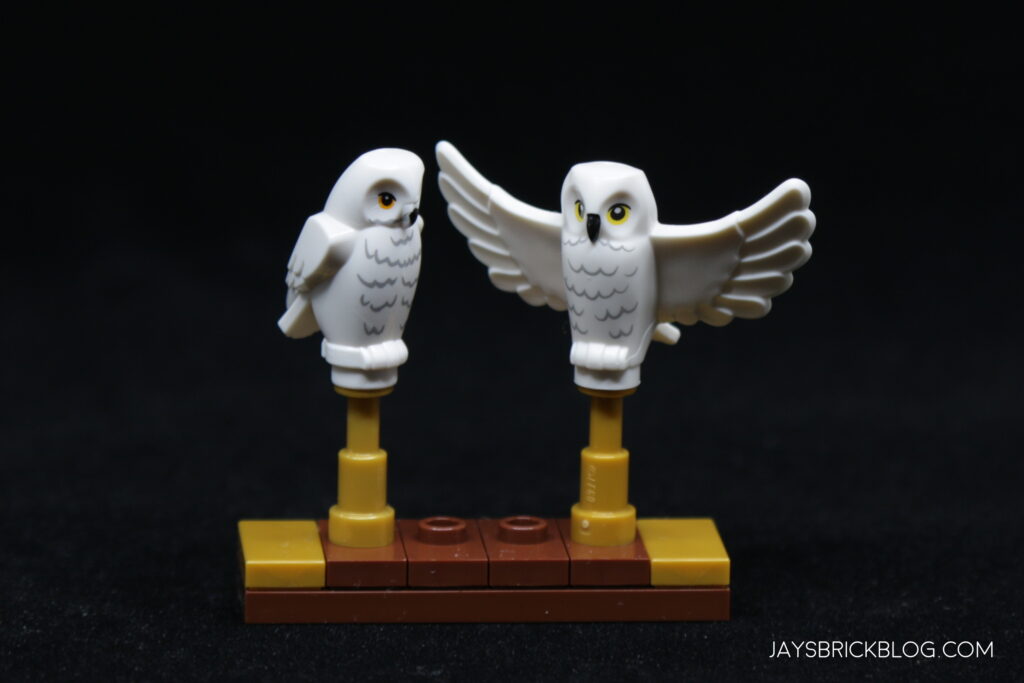 With its outstretched wings, the new Hedwig is a massive upgrade over the 2019 version from last year, and makes it look so much more alive – it has amazing moulded details on its wings, and the printing of Hedwig’s face and body is also quite nice.

This set is the most affordable way to get the new LEGO Hedwig without having to spring for the Astronomy Tower or The Burrow. 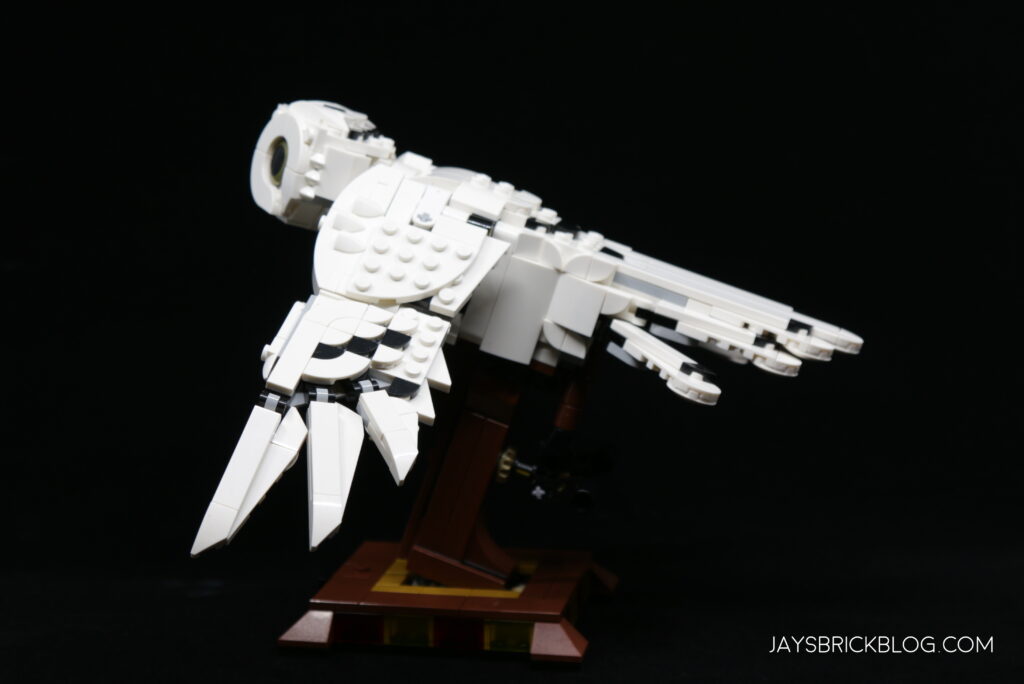 Here’s Hedwig from the side – the designers did a great job keepings her proportions just right, ensuring that she looks quite balanced. 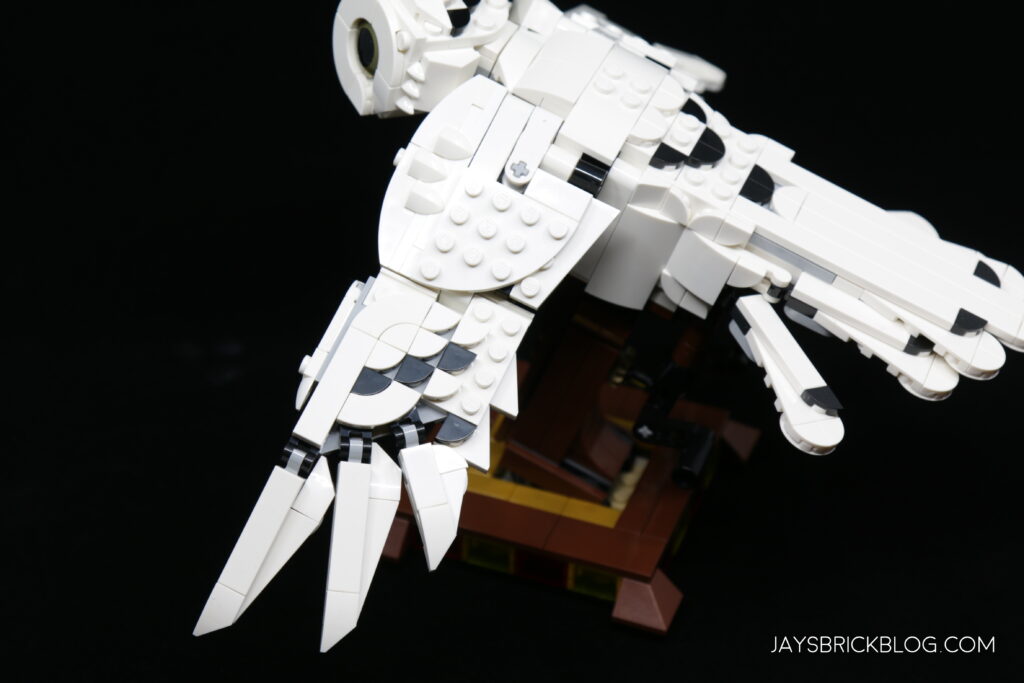 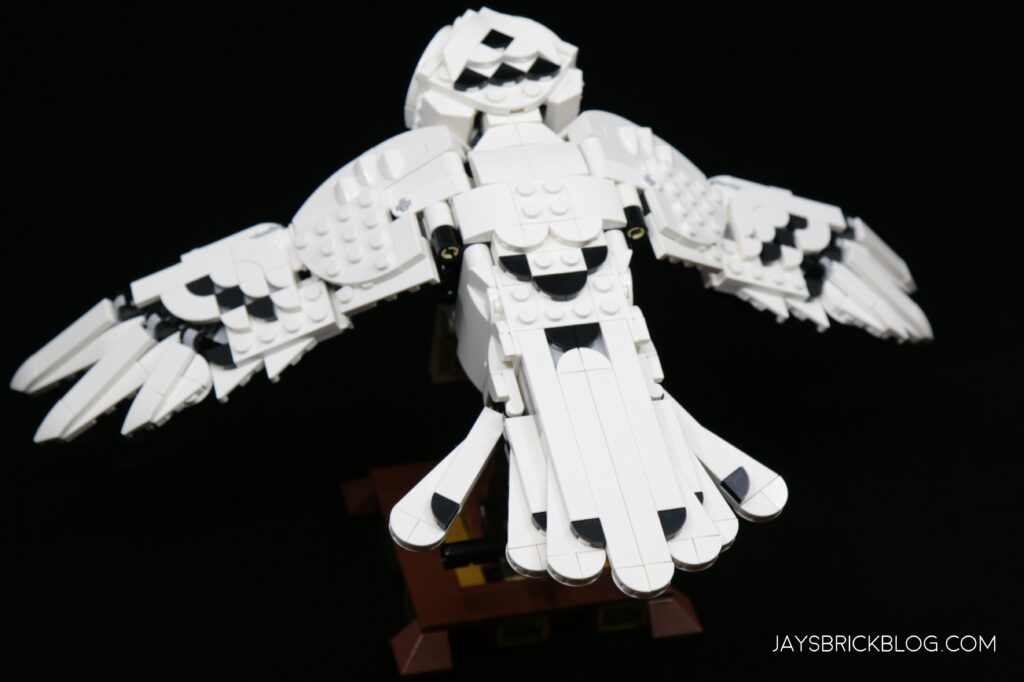 I really like the attention to detail given to Hedwing’s wings and tail – using an array of tiles, plates and exposed studs gives Hedwig a tangible sense of texture which also accurately mimics her feathers. 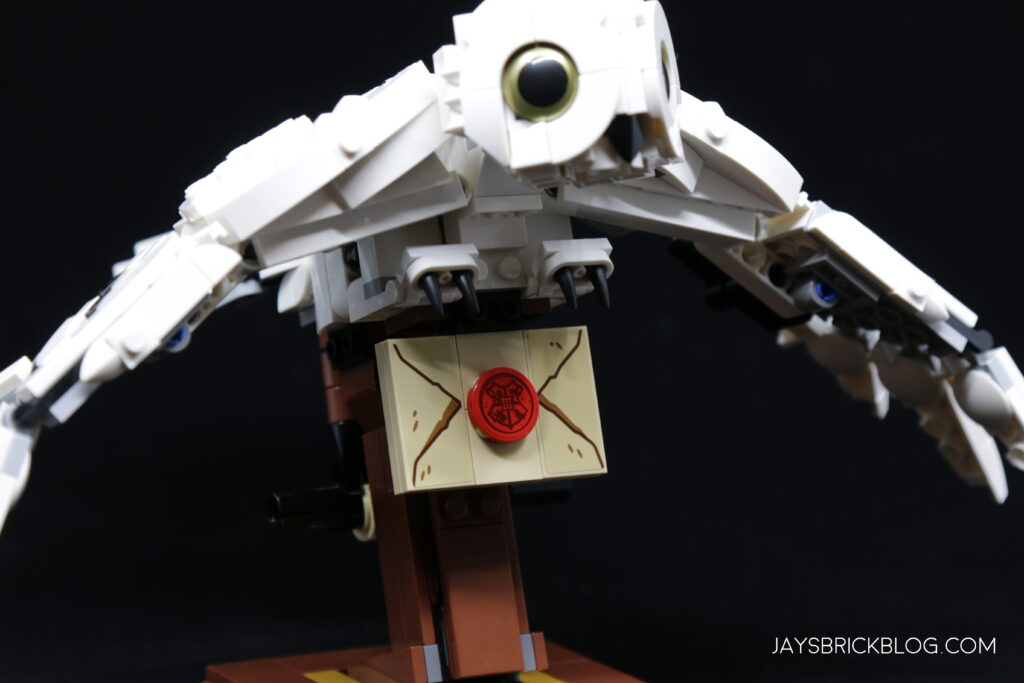 Paying homage to their roles as postmen and couriers in the Harry Potter universe, Hedwig also comes equipped with a letter bearing the Hogwarts crest on a wax seal – a nod to Hogwarts acceptance letters being delivered by Owl Post. 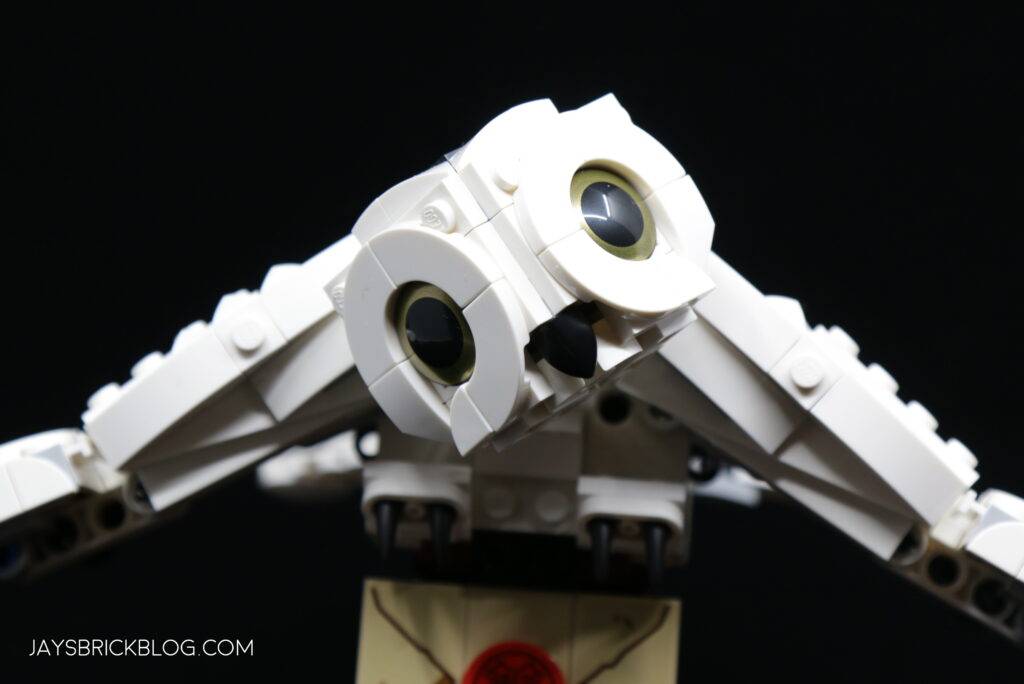 Hedwig’s head can be swivelled around and does a decent job mimicking the movement range of an Owl’s head. Her eyes are printed which is a nice touch, and I love how expressive and thoughtful they look. 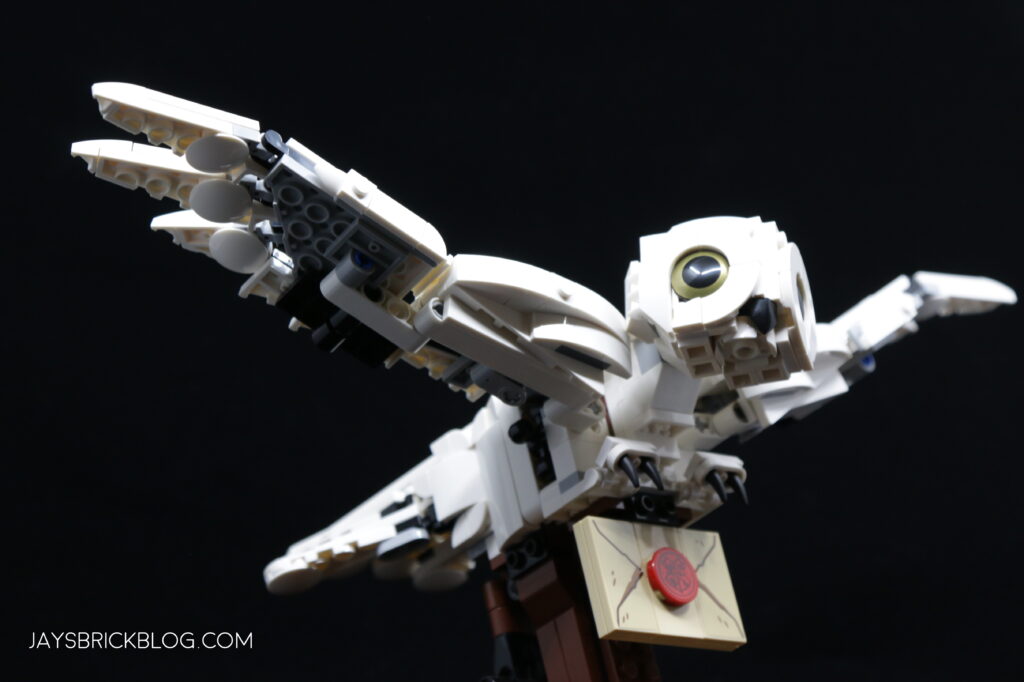 Here’s a look at the underside of Hedwig’s wings, which gives you a better idea of the mechanism that enables her wings to move. 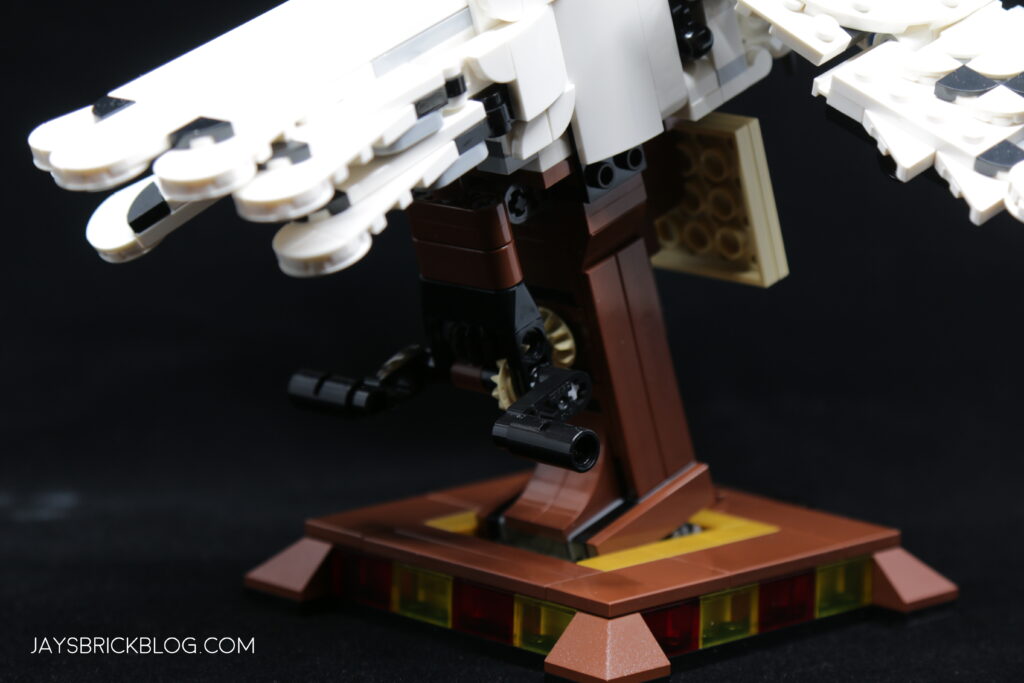 This is the hand crank that powers Hedwig. You basically grab the handle on either side and rotate it, which then sets Hedwig’s wings into motion. 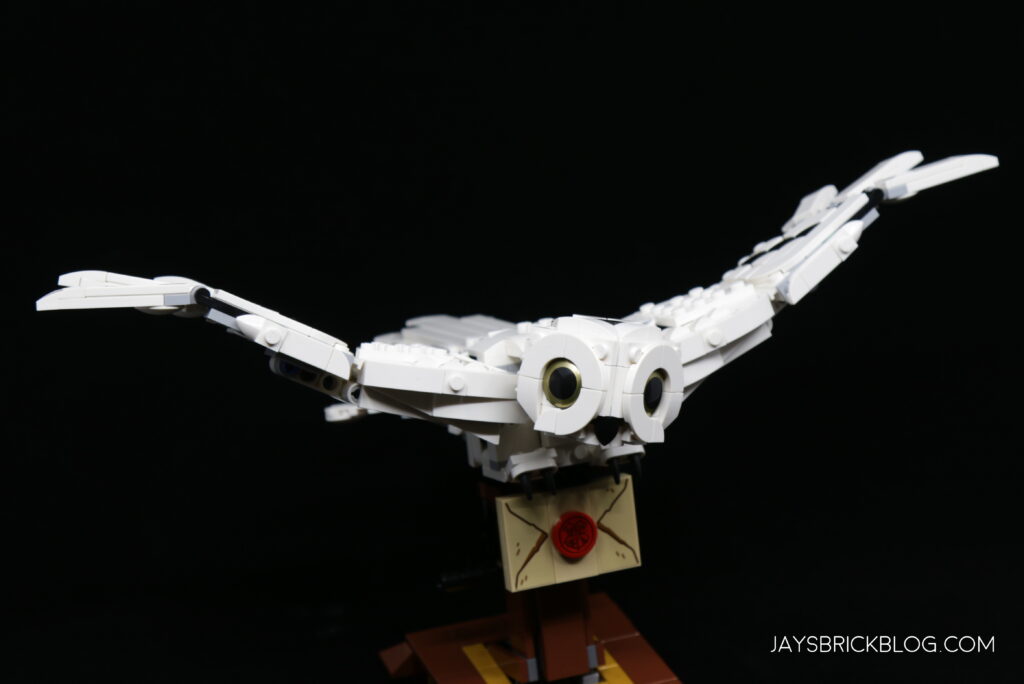 This entire set hinges on this play mechanic, and boy, did the designers completely nail it. Hedwig’s wing motion slowly rising up and down is extremely satisfying.

The wings beat very realistically, and is just buttery smooth and easy to crank as well.

Can you motorise Hedwig? Absolutely and it’s super easy to do. I put a short video tutorial together, and as long as you have a Technic motor, you can motorise it and properly bring Hedwig back to life.

I used the motor from 8293 but I couldn’t bother searching for the interuptor (to regulate the power and slow down the motor), so Hedwig looks a little manic as she flaps for her life, but it’s a fun little mod that you can do if you have spare Technic motors lying about. 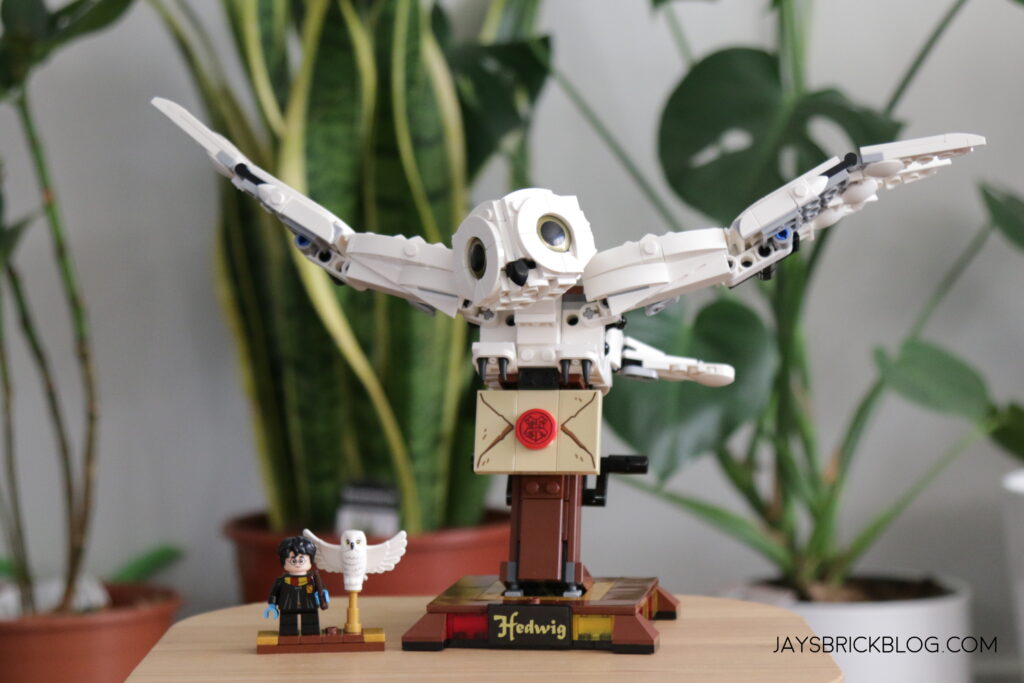 Final thoughts: LEGO 75995 Hedwig is one of the standout sets of 2020, especially in the sub-AU$100/US$50 price-range where not a lot of value is usually found.

The entire concept of kinetic LEGO sets is fascinating and has long been hidden in the domain of adult fans, so seeing LEGO adopt this trend and turn it into a mainstream LEGO set is a huge accomplishment.

As a display piece, Hedwig checks all the boxes – from its proportional design, and highly detailed features, to the fact that it comes with a display stand built-in, and doesn’t take up too much space.

Hedwig’s X-factor is of course its wing-flapping mechanism, which absolutely delivers on every front. The motion is buttery smooth with the hand crank, and is something that you’ll be more than willing to show off when guests visit.

The added bonus of it being easy to motorise is also nice, and adds to the utility of the set.

It’s great seeing LEGO push the boundaries with sets like Hedwig, and judging by how hard it is to find any on shelves or on LEGO.com, I’m pretty happy that their gamble is being rewarded.

I’d absolutely love to see LEGO incorporate cool features and break outside the box when it comes to offering novel and inventive play features which are fun no matter how old you are.

The only downside is that the set is quite expensive here in Australia – AU$70 RRP is pretty damn steep compared to other countries, but given that you can get the set from Kmart at a discount all year round, or regular 20% off sales, it doesn’t seem as bad for what you ultimately get.

LEGO 75975 Hedwig is an exceptional set, and one of the best mid-range LEGO sets of 2020. It’s a must-buy if you’re a LEGO Harry Potter fan, but even if you aren’t, the mechanism and engineering is worth the price of admission as well.

With Christmas coming up in a few months, I can see this being one of the hottest sets in LEGO’s catalogue for the holiday season.

Thanks for reading and I hope you enjoyed this review, and the video I put together!

As always, be sure to let me know what you think of this set down in the comments! Would you like to see more kinetic and mechanical builds from LEGO?