LEGO needs to get a new person to name their DC Superheroes sets. After the mouthful that was Catwoman’s Catcycle City Chase, LEGO have somehow managed to butcher yet another set’s name: Batman: Man-Bat Attack. I work in Communications and just saying it out loud makes me squirm.

As a LEGO set however, 76011 Man-Bat Attack performs quite more admirably than its poorly named name. Thankfully. 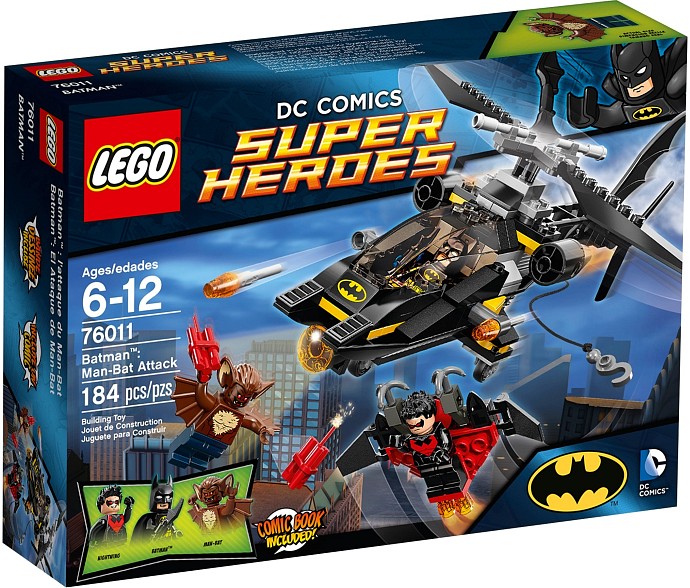 LEGO have discovered the recipe for success selling Superheroes theme $40 sets and it’s not difficult to see why. Containing 3 minifigures, one of which is almost always a highly anticipated character like Aquaman (or in this case Nightwing) and a well designed vehicle of some sort, the value that you usually receive in these sets makes them quite hard to pass up. 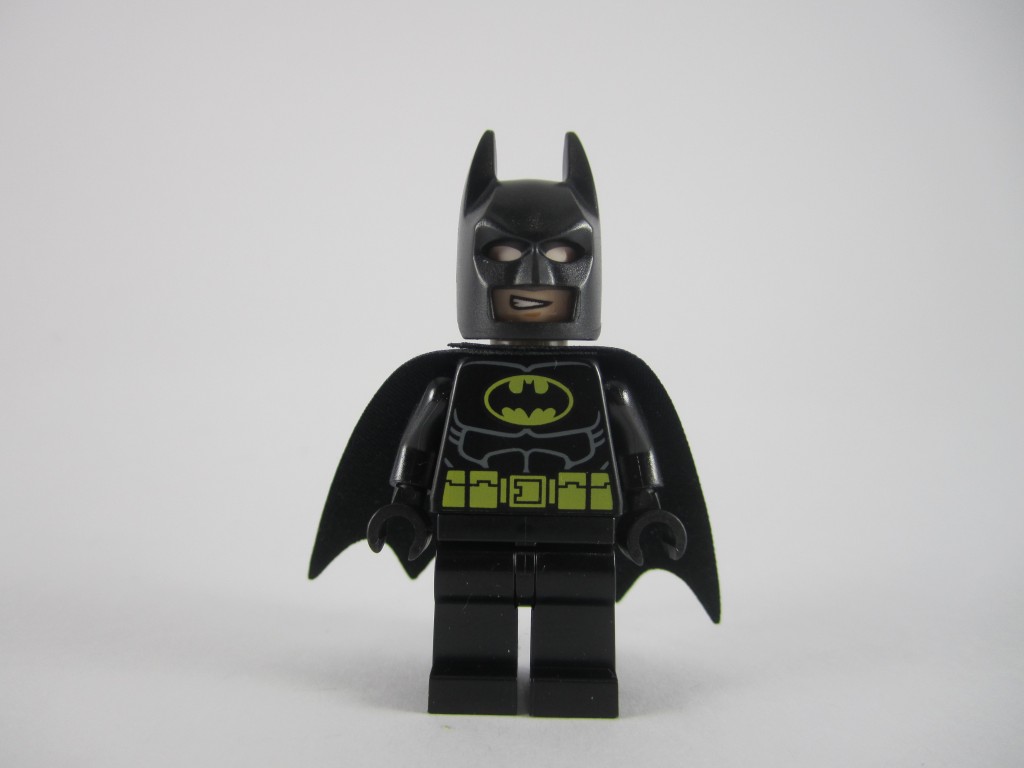 We start with Batman, the Alpha and Omega of LEGO’s DC Superheroes theme. Seriously, it’s almost impossible to NOT have a DC set without The Caped Crusader. This black and yellow version of Batman is relatively new, only having been available in a rare-ish 2012 polybag. I happen to own the polybag, so I initially thought that this was an old version of Batman but checks on Brickset revealed that he became available in sets this year. 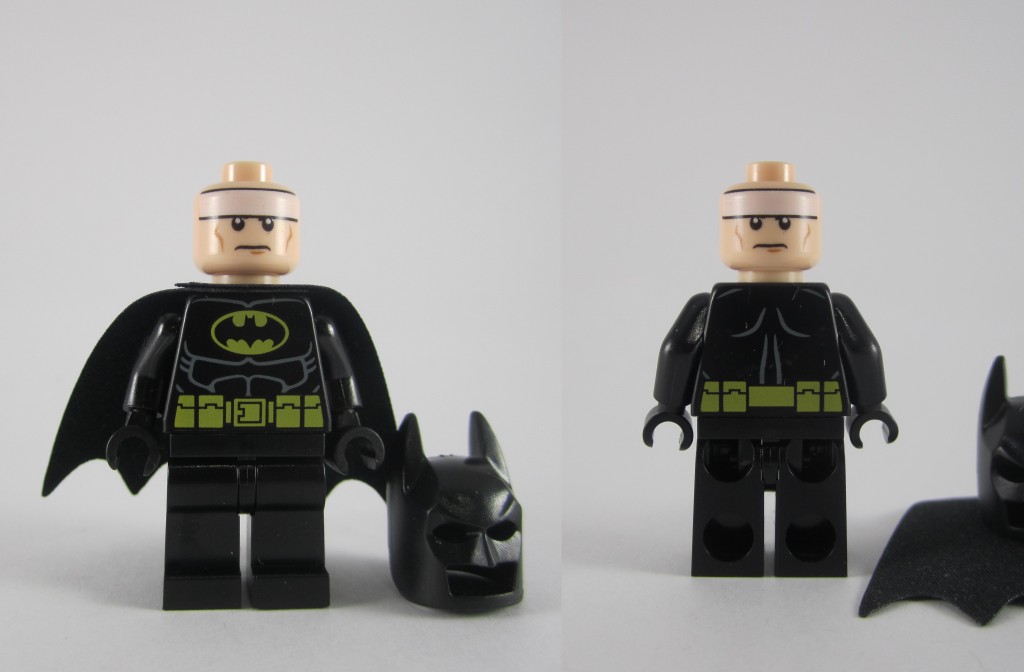 I quite like the black suit and yellow accents as I typically associate Batman with those colours. I’m also a fan of how prominent his utility belt looks on him, but outside of the colour scheme, Batman will still be Batman – he still has that silly headband when you remove his cowl as well as the usual armour detailing on his torso. 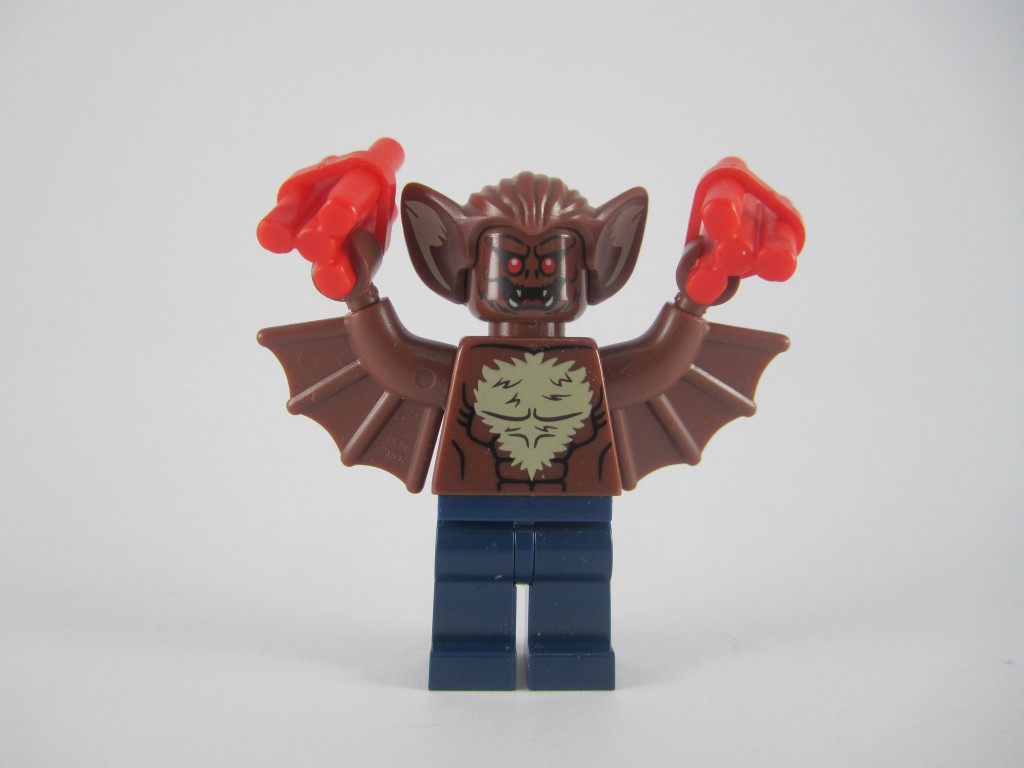 I’m not a  hardcore fan of Batman, so I never really knew of Man-Bat’s existence till this set. Reading up on the Batman Wiki, I soon discovered that he’s exactly what his name suggests, a man who turned into a bat due to some freaky science. Dr Kirk Langstrom (Man-Bat) has all the typical heightened powers of a Bat, such as echolocation, sharp claws and other Batlike features. I found it funny that his name is the opposite of Batman. 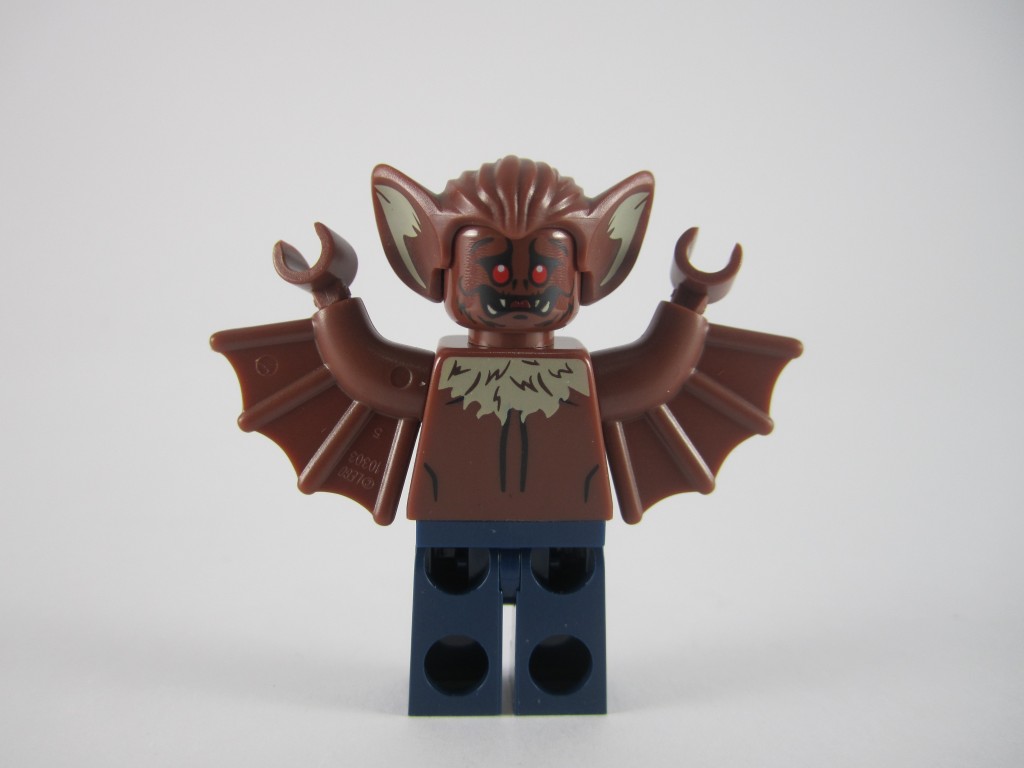 Man-Bat’s minifigure is a fairly stock standard variant of the Bat minifigures that debuted in the Monster Fighters theme two years ago except that he wields two sticks of dynamite. I like the high level of detail on both sides of his face, especially his back face that very clearly emotes sadness. I guess being a giant Bat monster isn’t so great after all. 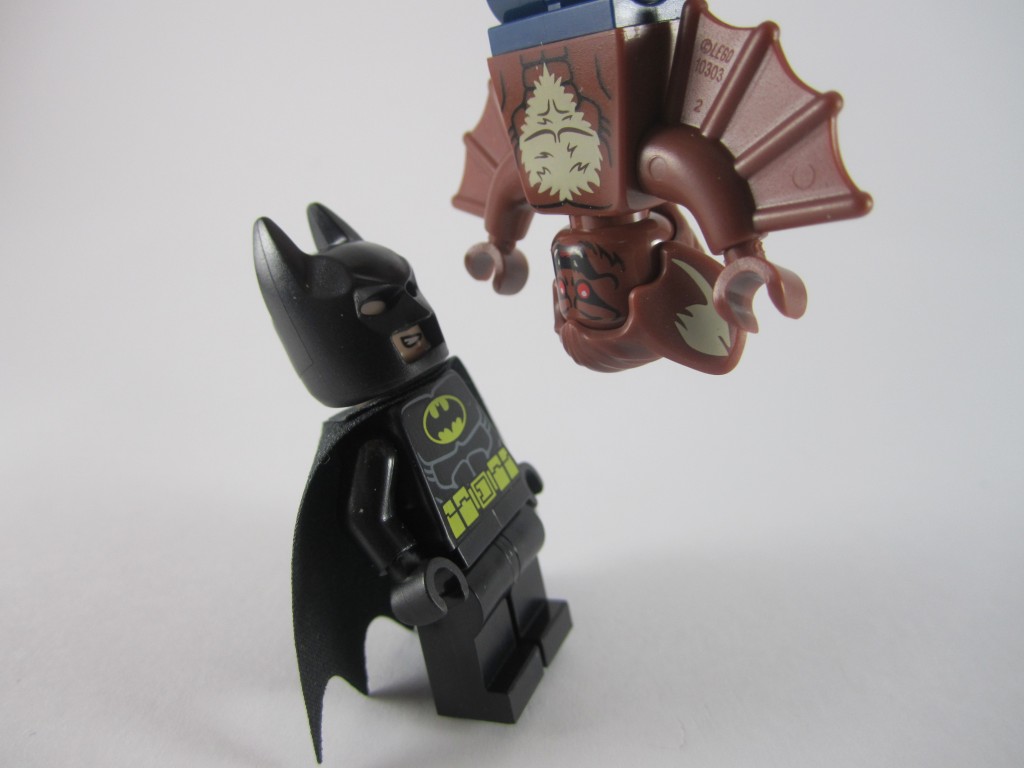 I’m pretty sure Man-Bat ponders about what life would’ve been like if he had been born as a billionaire’s son who took on bat as a symbol, instead of becoming a grotesque Bat-Human hybrid beast. Nightwing is most probably the only reason why fans will buy this set, and boy is it a wonderful reason indeed. After realizing that being called the Boy Wonder and traipsing around in a Green, Red and Yellow circus costume might not be the best for his image, Dick Grayson finally wised up and took on a more bad-ass alter ego – Nightwing. Arguably one of the cooler and more popular superheroes in the DC Universe, Nightwing’s reputation as a full-fledge defender of Gotham City and all round bad ass makes for a great minifigure. This is the first time we get Nightwing in Red as his previous appearance was in his blue suit (in 2006’s Arkham Asylum), complete with ridiculous haircut. 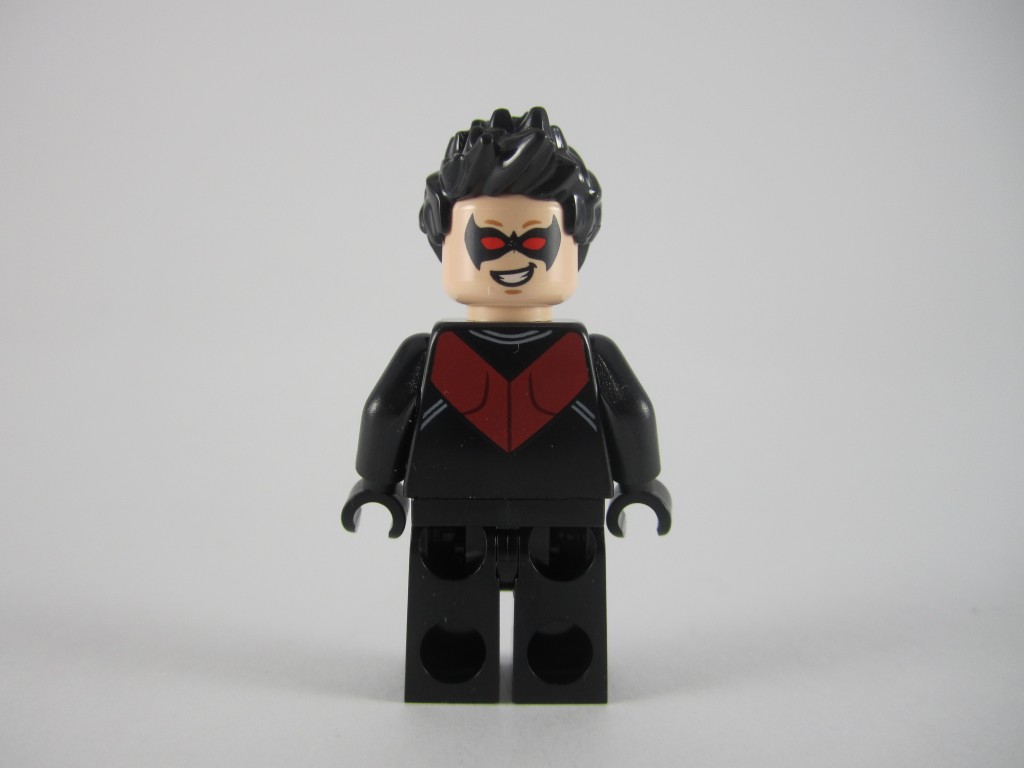 Nightwing’s appeal as a minifigure is derived from his understated yet iconic costume, with a very effective use of striking red features on a pitch black costume to create a marvelous contrast. With spiky black hair, a menacing black mask that’s pierced by fierce red eyes, Nightwing’s minifigure seems to tick all the right boxes. Nightwing is a welcome addition to the DC Superheroes lineup and is a must-have for any serious fan or collector. 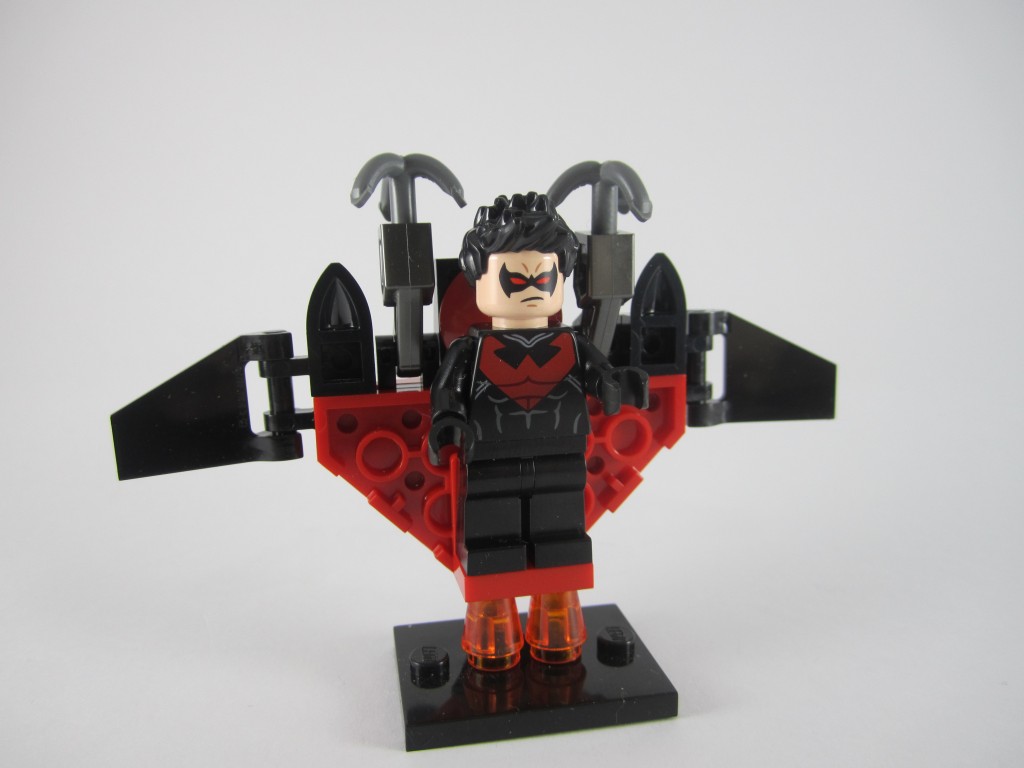 If you’re worried that his costume and minfigure might be more on the plain side, Nightwing also comes with his very owned Jetpack – as if he couldn’t be any cooler! The jetpack makes splendid use of the red and black colours and has great little details such as wing flaps and grappling hooks in addition to the trans-orange jet thrusters.

The only flaw in the design is that it can’t really stand on its own and has to be attached to a wide or heavy base to stand upright. Most LEGO fans can’t stand stickers but slapping on Nightwing’s logo onto his jetpack seemed like an obvious and tasteful choice. I would’ve preferred that the red coloured sticker was the same colour to match the red bricks and maintain a sense of uniformity. 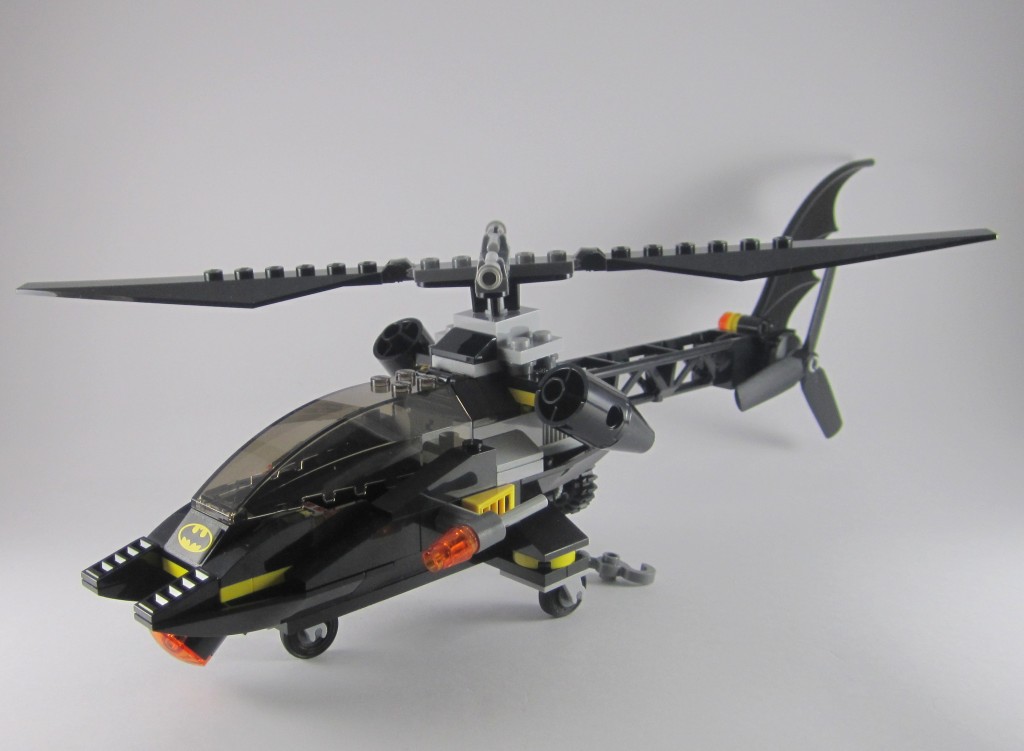 Here comes the main course of the set, Batman’s helicopter. While Nightwing may have his fancy jetpack to track down Man-Bat, the Dark Knight prefers a more imposing philosophy to transportation, opting for a Bat-Copter to give chase across the Gotham skyline. I felt that LEGO did a remarkable job with the helicopter, with clever use of yellow bricks to break the monotony of the black and ensure that Batman’s ride is colour coordinated with his costume.

The Batcopter’s build is quite tight and balanced enough to give his vehicle a more believable sense of scale. Everything from the curves, to the twin rotors and tail ensures that the Batcopter doesn’t look ridiculously unbalanced or too outlandish. It has a gritty sense of realism to it, like it actually looks like a normal helicopter instead of the kinds of comical vehicles that Batman sometimes uses. 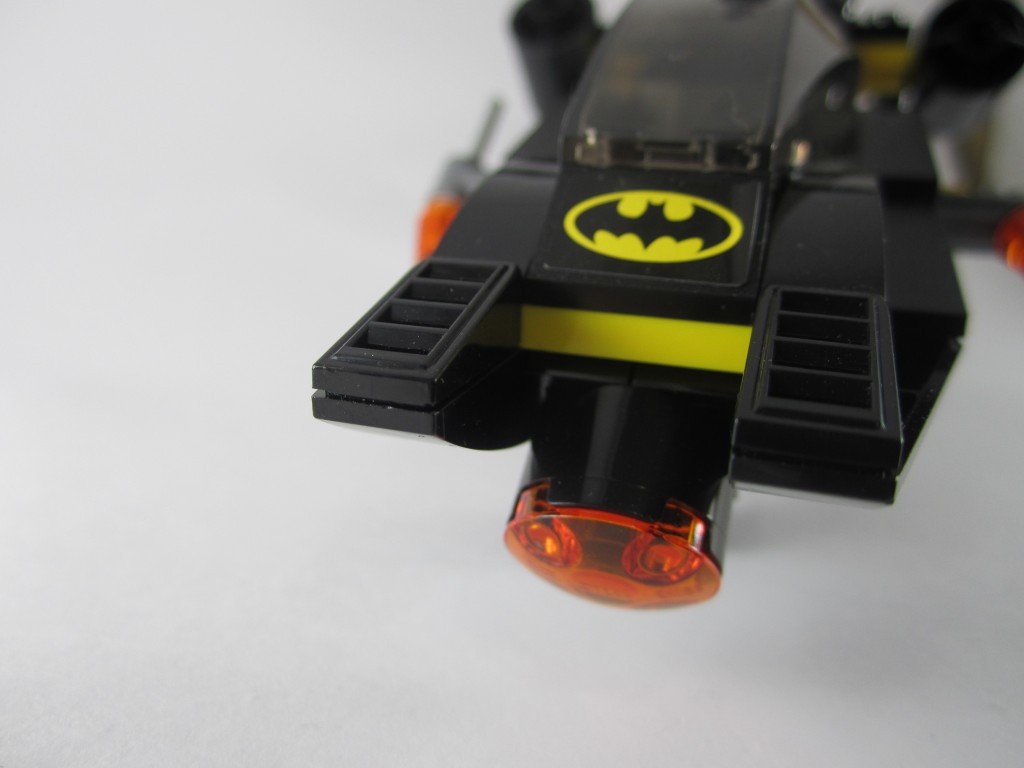 The Batcopter’s nose sports an orange search light, which should come in handy when tracking down flying villains such as Man-Bat. It could also be a laser cannon. Actually, I think I’m going to call it a laser cannon from now onwards which is WAY cooler than a searchlight. 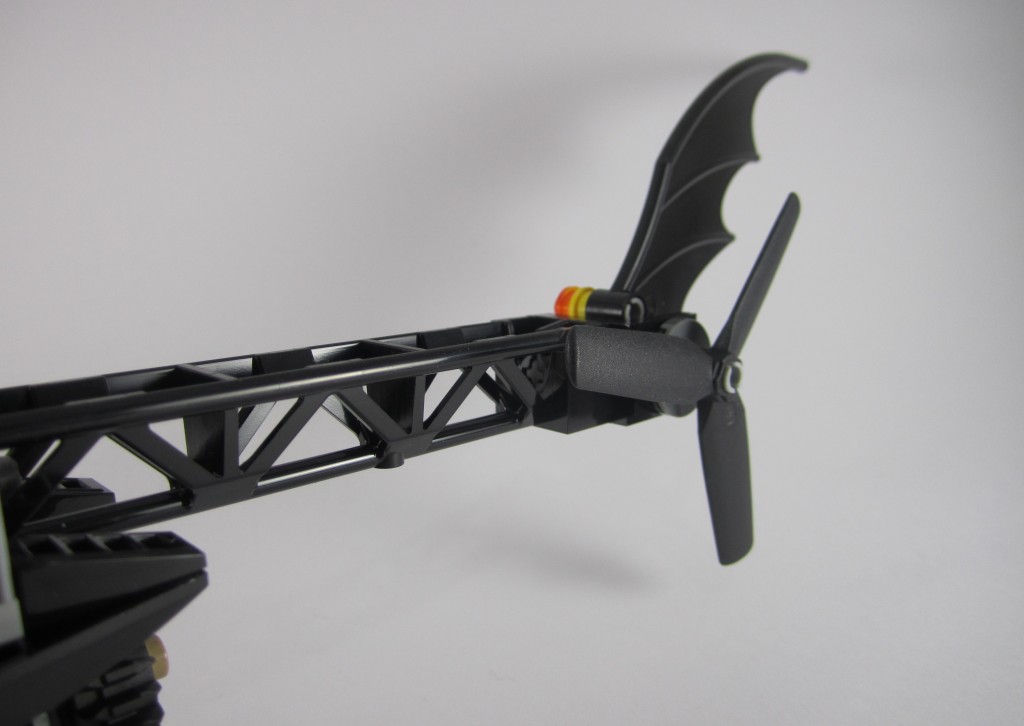 I really liked the use of this pillar/scaffolding piece to build the tail. The holes and wirey appearance allows the helicopter to seem quite lithe and mobile and I don’t recall any other helicopters employing this building technique. 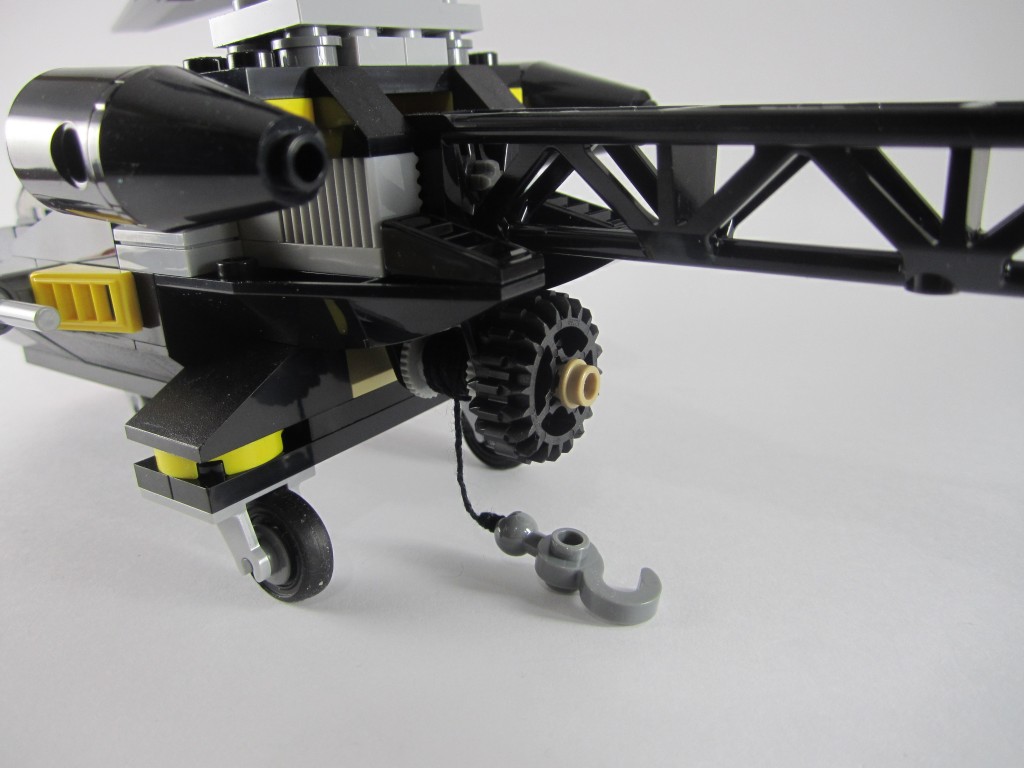 It wouldn’t be a Bruce Wayne vehicle if it didn’t have cool features such as this hook that can be extended and pulled upwards through the use of a turning knob mechanism. Another thing that I quite liked is the wheels on the helicopter, which allows it to move quite smoothly when on the ground. It’s pretty insignificant but it was moderately enjoyable to drive the helicopter around on flat & smooth surfaces. 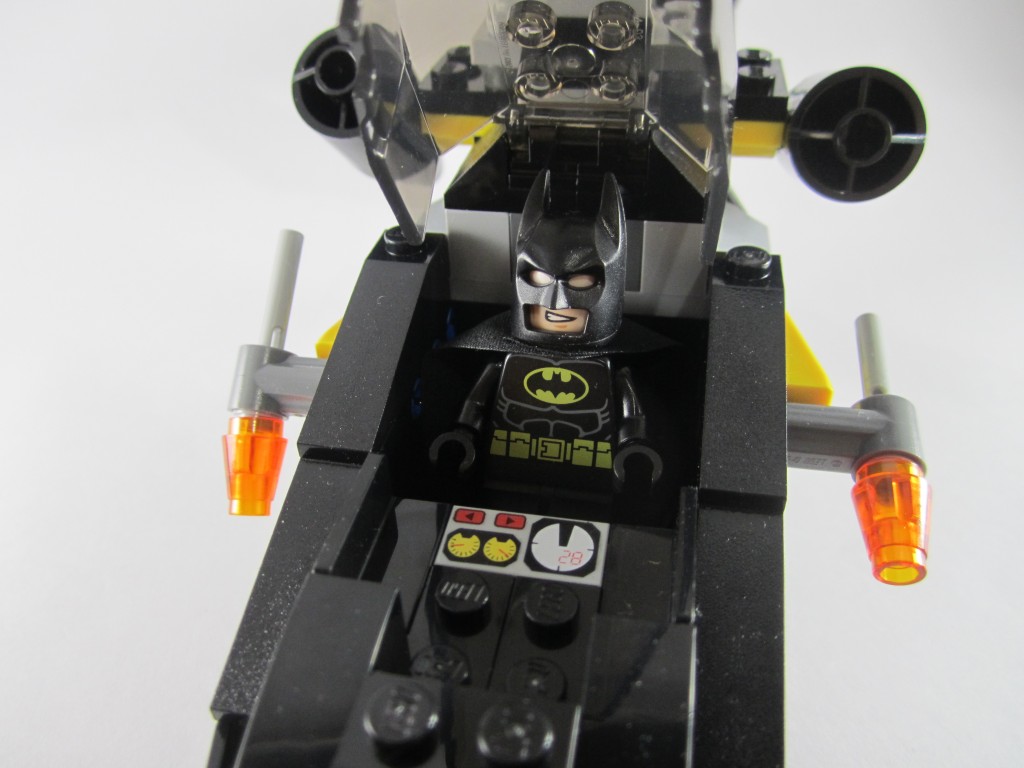 Lastly, Batman comfortably occupies the cockpit, which also has enough room for his cape. I love it when minifigures with capes have enough space in cockpits so that it doesn’t get all squashed or crumpled. As usual, there are two flick fire missiles flanking the cockpit but really, who actually cares about flick fires. They’re about as exciting as watching grass grow. 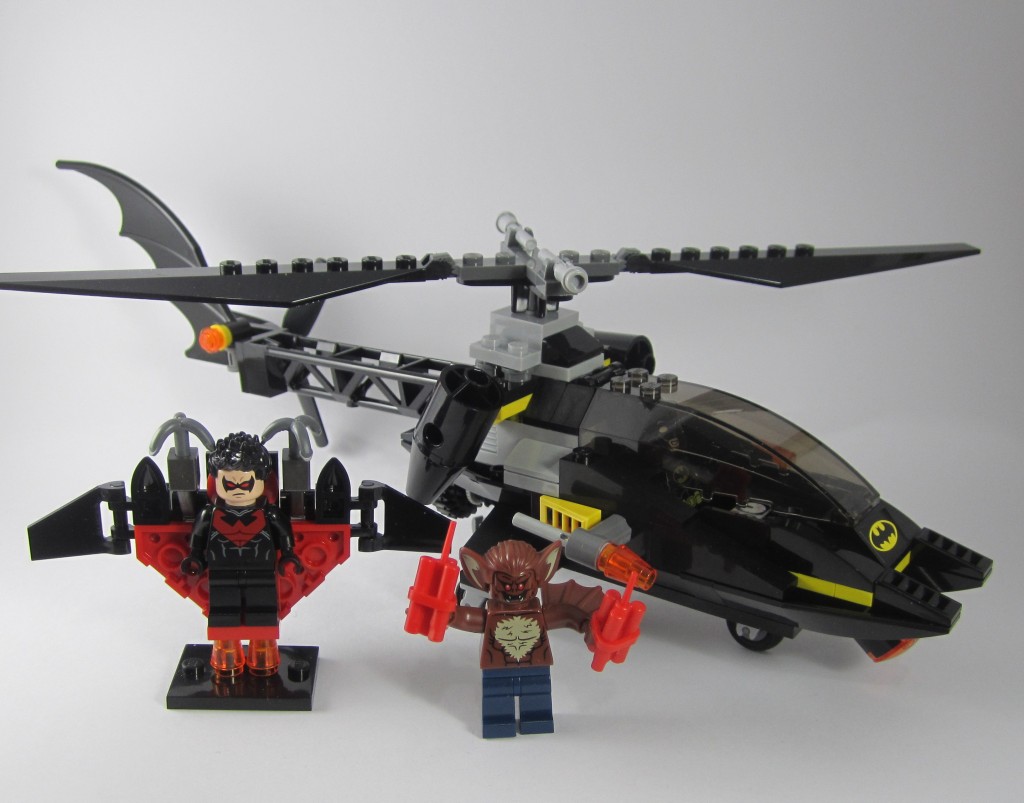 Final Thoughts: I’ll be honest, I bought this set purely for Nightwing but I didn’t quite expect that the other elements in the set could come together so well to make it quite an enjoyable build and buy. Man-Bat is quite an obscure villain (to me) but it makes sense in this context for Nightwing (with his jetpack) and Batman in his Batcopter to duel it out in the air. The weakest points of this set is Man-Bat and to a lesser extent Batman, but the latter is probably due to Caped Crusader fatigue more than anything else. Please LEGO, give us more non-Batman sets like the Lex Luthor Power Armour one. Unless Batman’s suit is super exciting or interesting, it feels a lot like Marvel sets where Spider-Man seems to be everywhere.

The helicopter was quite fun to put together and I was pleasantly satisfied by the end result. For a $40 set, it doesn’t feel like I was shortchanged and for Superhero purists, will be an accessible way to add Nightwing to anyone’s DC Comics minifigure collection.

Thanks for reading! It was great finally having some time to put a review together. I’ll leave you with a funny picture of Nightwing not being able to completely shed his responsibilities as Batman’s sidekick. 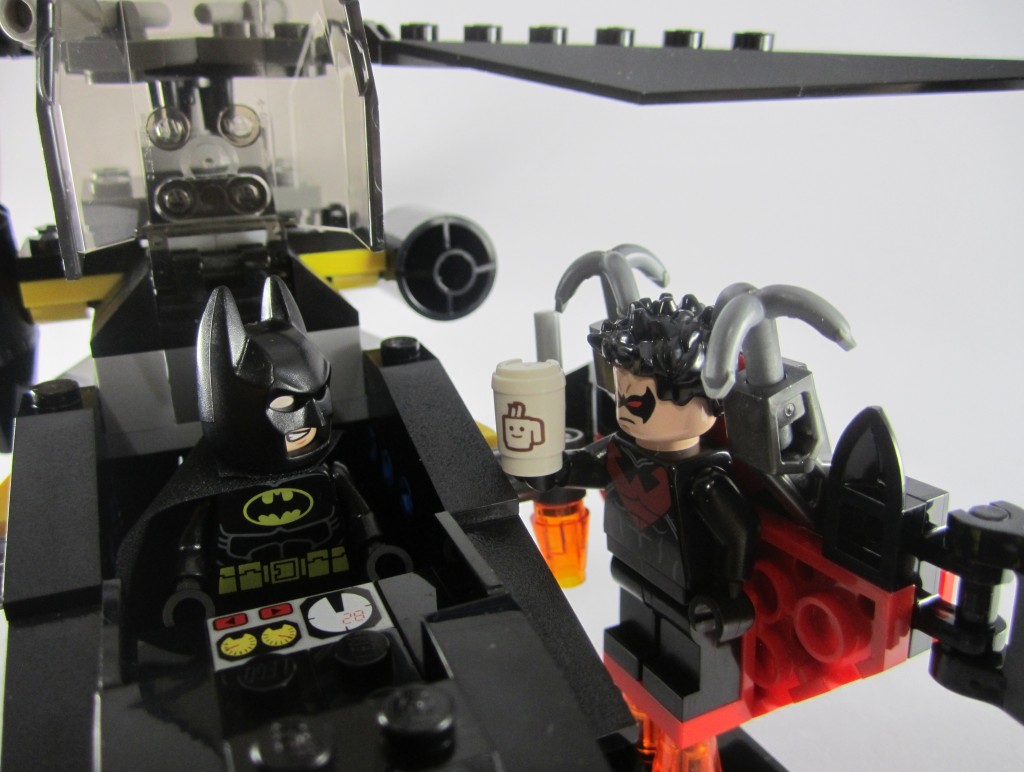