The highly anticipated sequel to the Avengers, Age of Ultron is not out in Australia for another month but LEGO sets based on the movie have been showing up in Australian stores. Hurray!

I picked up the smallest set from the theme, Iron Man vs Ultron for a quick review which should give you a taste of Marvel’s newest Super Hero theme! 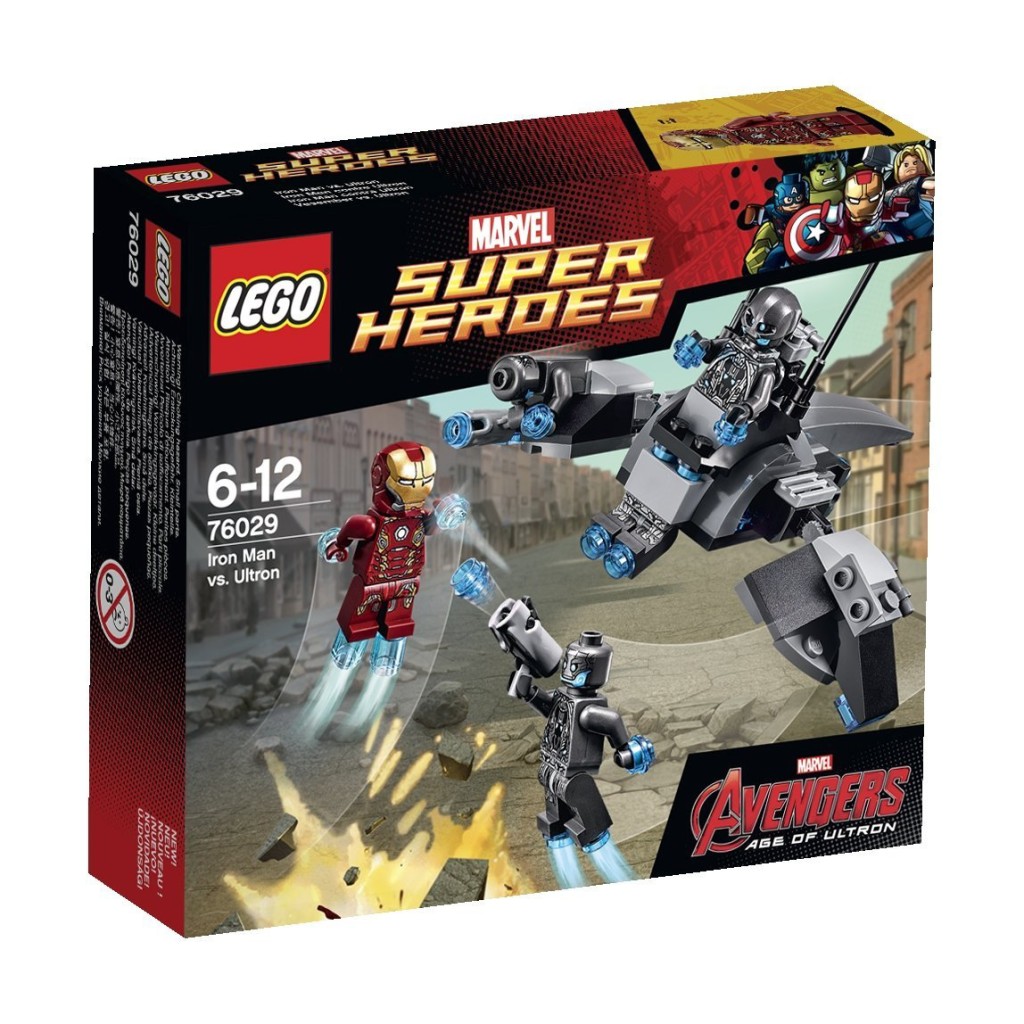 Having the distinction of being the smallest Age of Ultron set, there’s really not too much to write about Iron Man vs Ultron. At 90 pieces and with 4 minifigures, Iron Man vs Ultron is more glorified battle pack than full fledged LEGO playset.

Since the movie isn’t out, the context behind this set is a little hazy – in fact it wouldn’t be too far-fetched to assume that this showdown might not even translate to the big screen. In this set, we have Iron Man in his brand spanking new MK 45 armour (Tony’s armour in Iron Man 3 was the MK 42) squaring up against a legion (it’s really only 3) Ultron Sentries.

The set’s name is a little misleading since Iron Man doesn’t actually go toe to toe against Ultron. Ultron seem like a hands-off kind of supervillain, preferring to let his minions do the dirty work. 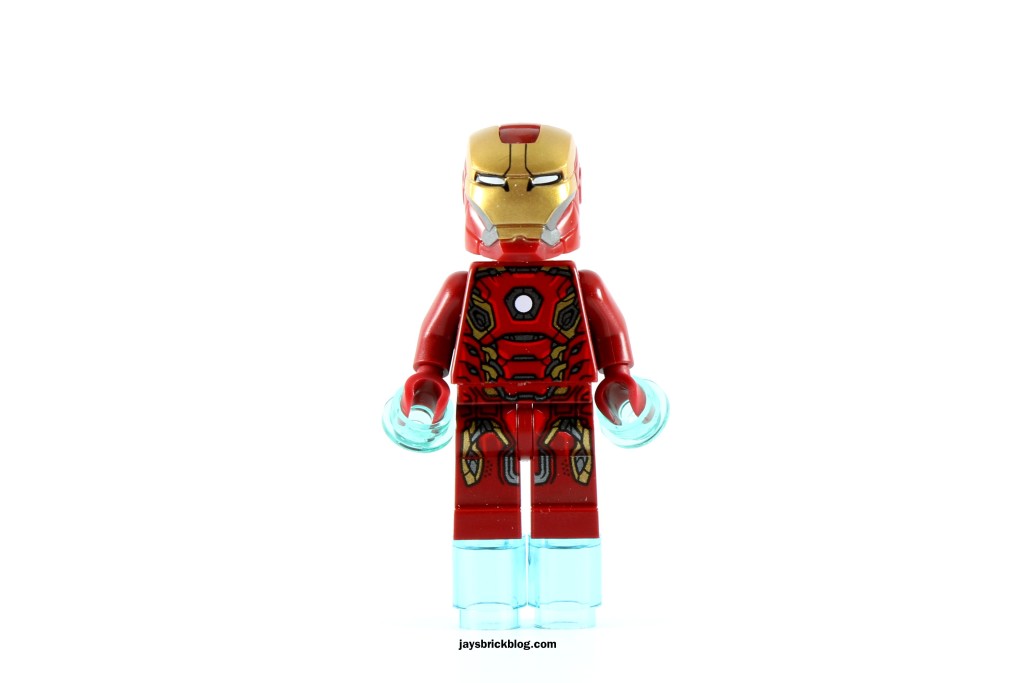 Here’s Iron Man in his shiny new MK 45 armour who is exclusive to this set. It’s a really good move by LEGO, placing the exclusive Iron Man minifig in the most accessible set. The printing on the MK 45 is amazing, with a spectacular amount of detail.

With red being the dominant colour, the golden bits get quite lost and ends up looking a little dull due to unintended the colour bleed effect. Like all Iron Man minifigures, he comes with the translucent blue studs and 1 x 1 round bricks that act as visual cues for his repulsor on his hands and feet. 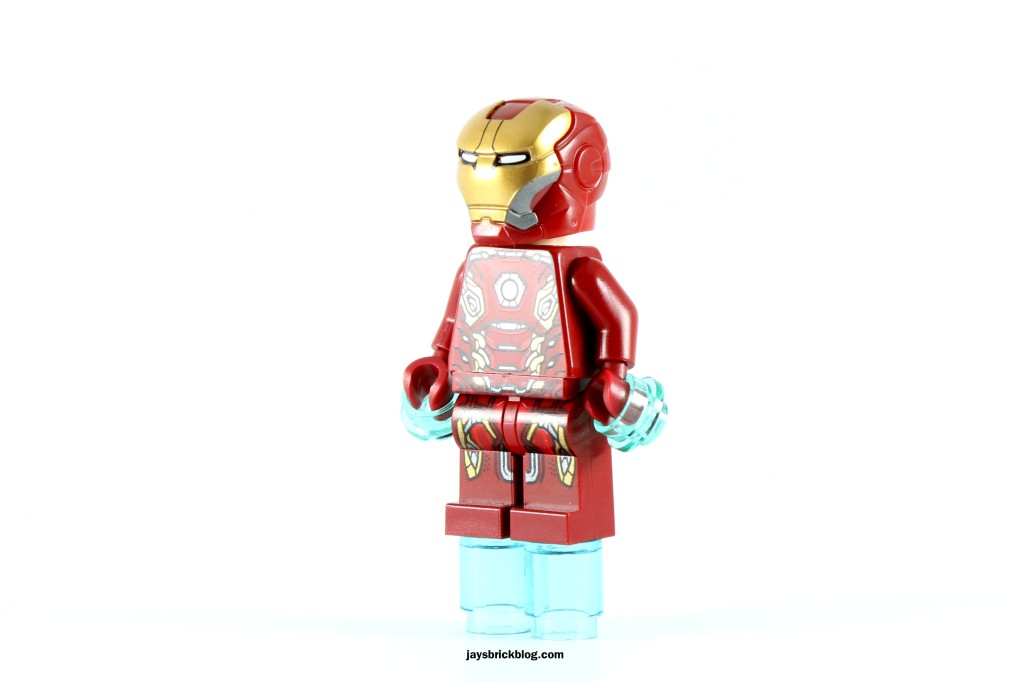 The MK 45’s helmet has also undergone a few changes with two black lines running down his forehead and grey umm.. cheekbones. I don’t really like the greyish areas on his helmet as it feels very disjointed against his red and gold elements. I’d have preferred a cleaner look, but since this is based on a movie, the design team was probably constrained by the design considerations. 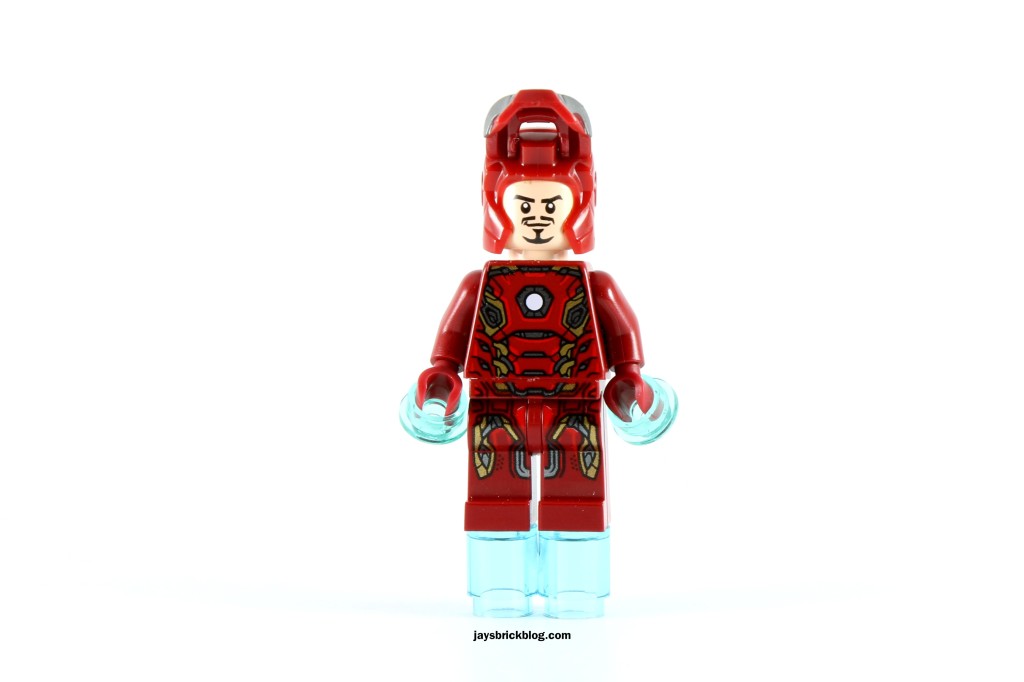 Like all Iron Man helmets, you can flip up the visor to reveal Tony Stark’s smug face. Gotta love that priceless smirk on him. 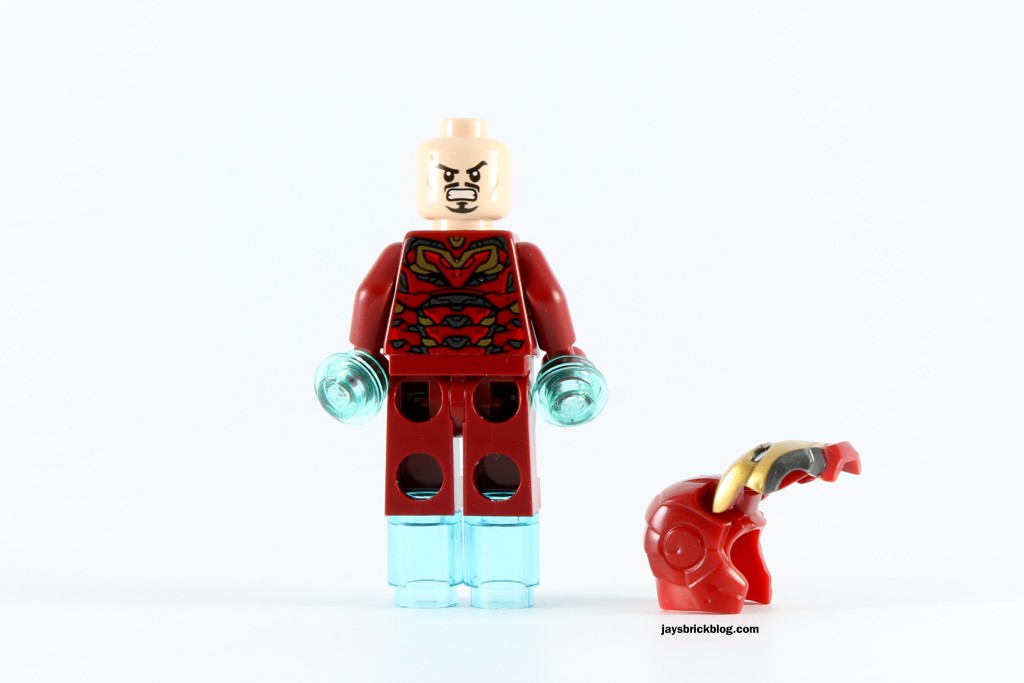 Like most licensed theme minifigures, Tony has an alternate angry face. You can also see the minifigure’s back printing which also suffers from the dull colour bleed. I think LEGO could’ve remedied the dull colours by using more metallic gold paint in the torso to improve the contrast. 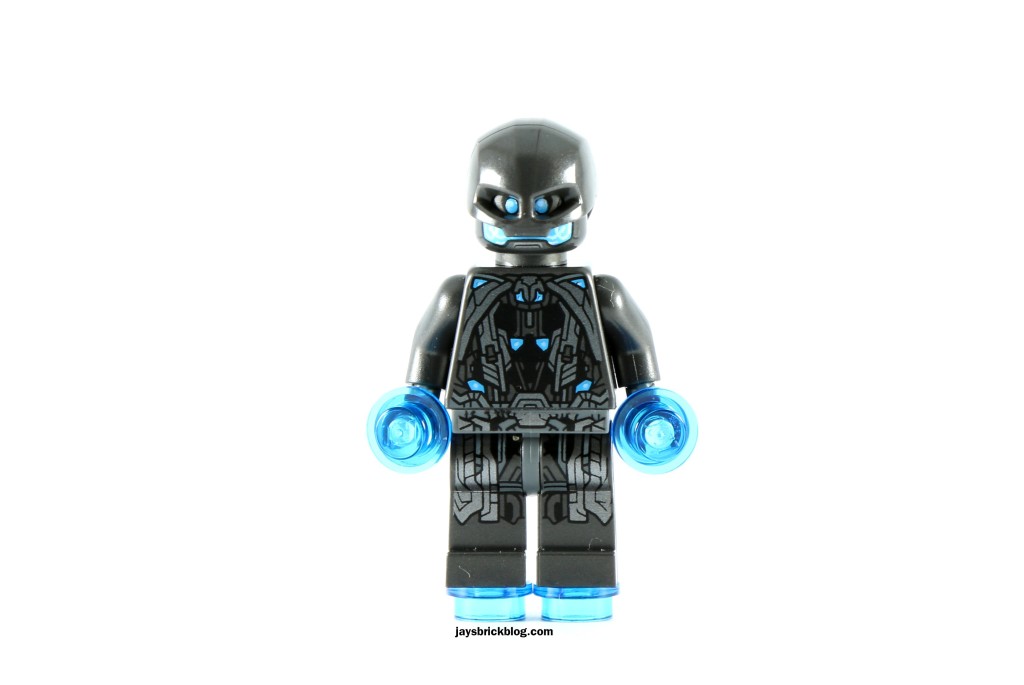 Here’s the Ultron Sentry Officer, which is sort of the main Ultron footsoldier because of his fancy helmet. He’s the guy that pilots the Ultron vehicle but other than his special helmet, he is an exact replica of the other 2 Ultron sentries. Think of him as middle-management in Ultron Inc.

Like Iron Man, the Sentries have trans-blue studs for the repulsor energy beam effect. 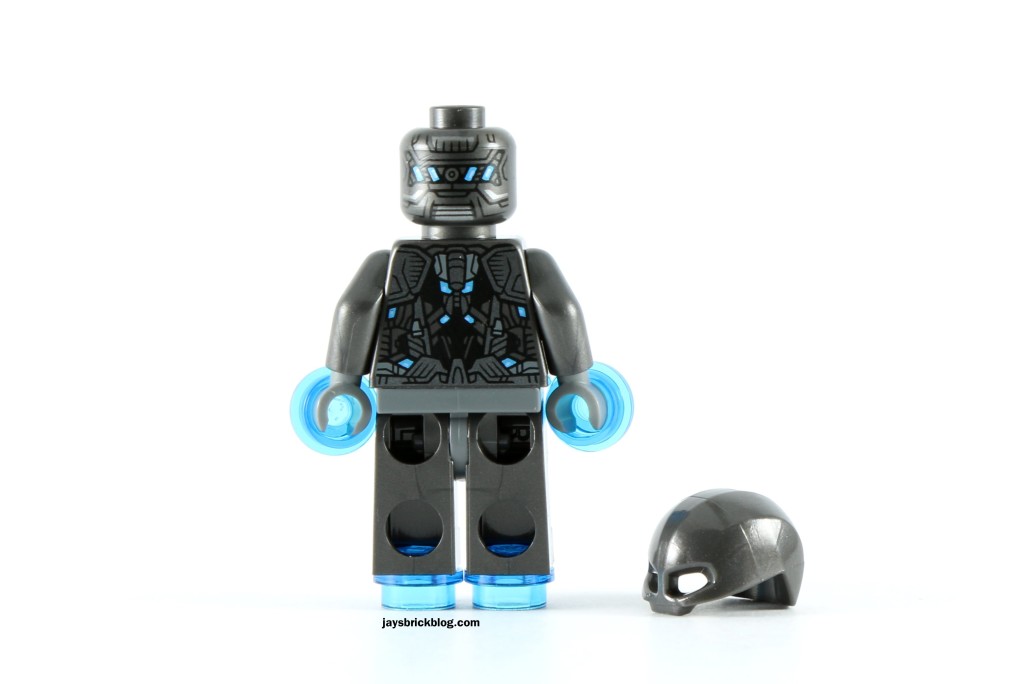 Here’s a look at the Ultron Sentry’s back printing. Like the front, the elaborate detail on the torso is really done well, with a great use of different shades of grey punctuated by electric blue details. 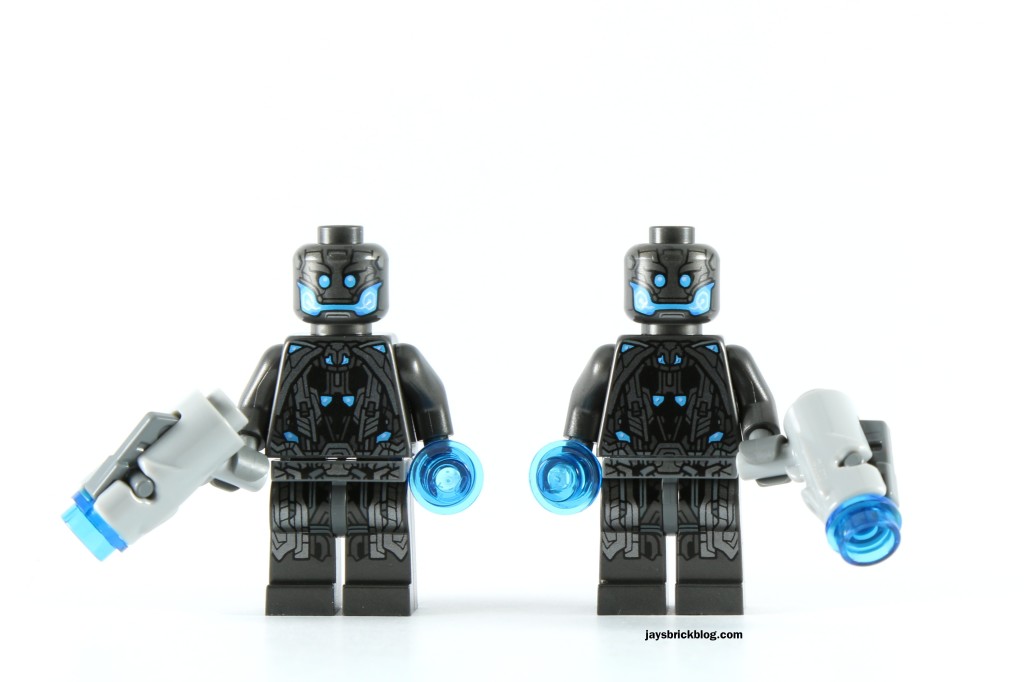 Here’s a look at the other 2 Ultron Sentries, which gives you a better look at their faces. I have to say, their faces look quite comical with oversized, almost clowny smiles. They’re both equipped with stud blasters that are becoming quite ubiquitous in today’s LEGO sets.

Overall, getting 3 Ultron Sentries is great, especially since the trailers allude to the fact that Ultron commands an entire legion of these Sentries to take down the Avengers. This set being a battle pack means it’ll be quite easy (and cheap!) to build your own army of Ultron soldiers. 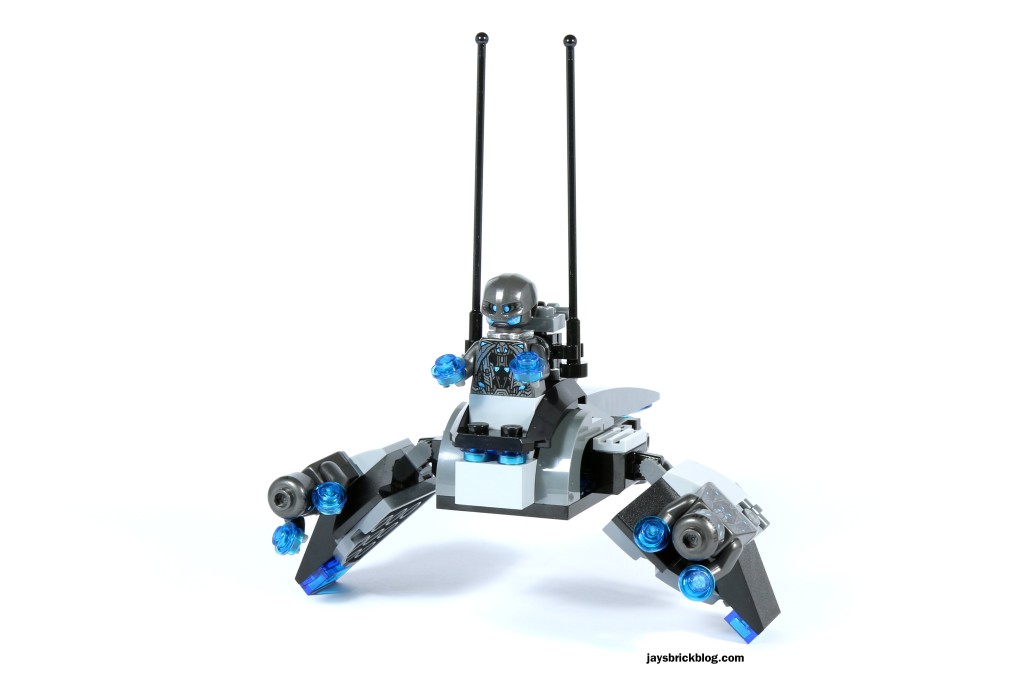 Here’s the Sentry Officer’s vehicle. It’s a very simple looking build with a couple of quirks that involve the other Ultron Sentries. The model is quite average and there’s nothing much to get excited about – par for the course for a small set. 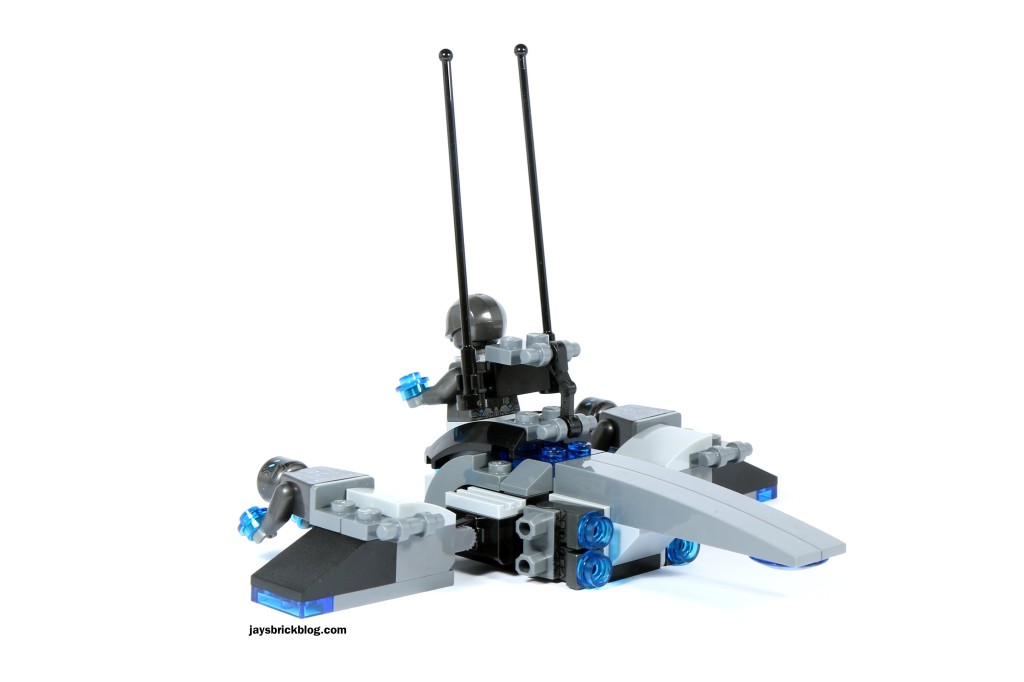 There are two modes if you may, a walker mode in which the vehicle is balanced on its legs which can be folded downwards, or flight mode with its wings outstretched.

The most interesting thing about the vehicle is that the Ultron sentries are actually built into the model. Both Sentries are attached to the wings/legs by their torsos and their legs are joined into the tail with the repulsors facing backwards to propel the vehicle forward.

Other than that, it’s just a bunch of random grey parts coming together in an unexciting model.

Being a small set, there’s a small play feature that’s built into this set. You’re supposed to use the Super Jumper to boost Iron Man into the air and knock the Ultron Sentry Officer off his perch, but I’m not letting the Super Jumpers anywhere near my minifigs since they’ve been proven to damage minifigures.

It’s a fairly simple play feature and after a while, you’ll get irritated by the Sentry Officer’s inability to sit tightly in his cockpit that you’ll probably do what I did and take matters into your own hand to affix him firmly into his seat. 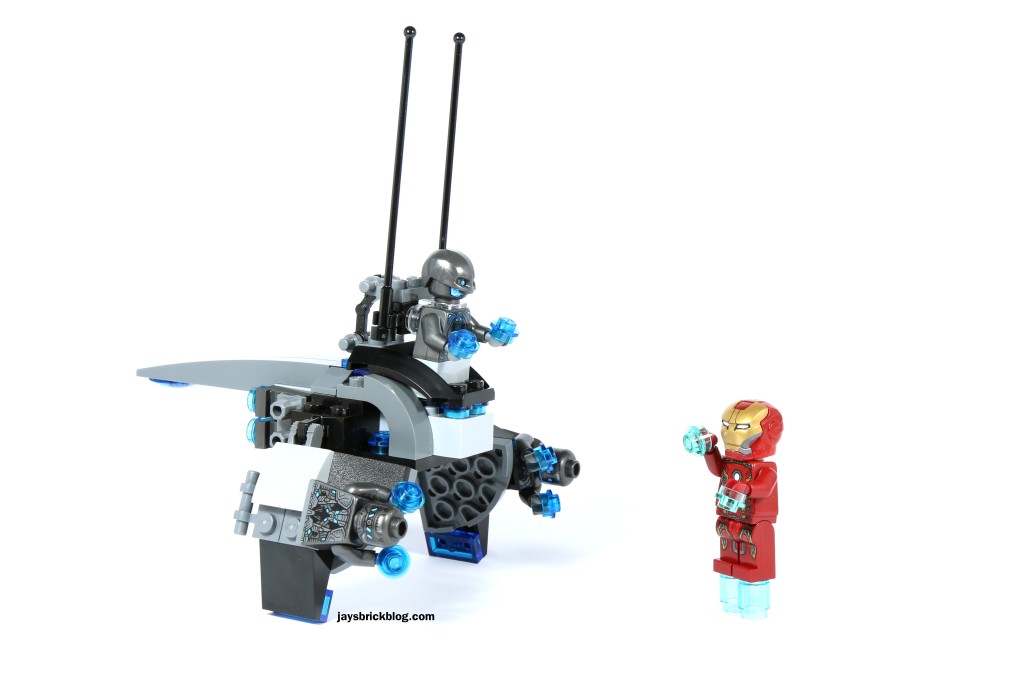 Final thoughts: Iron Man vs Ultron isn’t the best introduction to the Age of Ultron sets. Its more useful as a battle pack for fans to cheaply and easily build an Ultron clone/sentry army. For $20, getting 4 minifigures is actually a really decent deal, especially when you factor in the exclusive Iron Man and the 3 brilliantly designed Ultron Sentries – one of which has a really cool helmet that will be useful in other sci-fi MOCs.

If you’re a Super Heroes or Avengers fan, you’re almost mandated to get this set because of the Mark 45 armour and Ultron henchmen. At $5 per minifigure, it’s almost the same as buying Minifigure Blind Bags and you also have the added bonus of a bunch of varied grey parts.

If you don’t care about Super Heroes or the Avengers, there’s not much here that will interest you.

Here's a look at 40585 World of Wonders, a new gift with purchase that has surfaced on LEGO.com featuring delightful 4 microscale models!If you have a big purchase planned, you might want to hold off and wait for this GWP, if these micro historical builds appeal to you! ... See MoreSee Less

An upcoming LEGO gift with purchase (GWP) has surfaced on LEGO.com – 40585 World of Wonders, which appears to be a small 382-piece micro-scale Architecture set based on some of the new Seven Wonders...
View on Facebook
· Share