The new wave of LEGO Super Heroes have started showing up on Australian shelves, so I wasted no time picking up the smallest Marvel set available, Carnage’s SHIELD Sky Attack! I’m not the most well-informed when it comes to Spider-Man, especially his most recent outing as Miles Morales in the Ultimate Spider-Man series but with three fantastic new minifigures in this set, I couldn’t resist buying the set to put together a brief review. 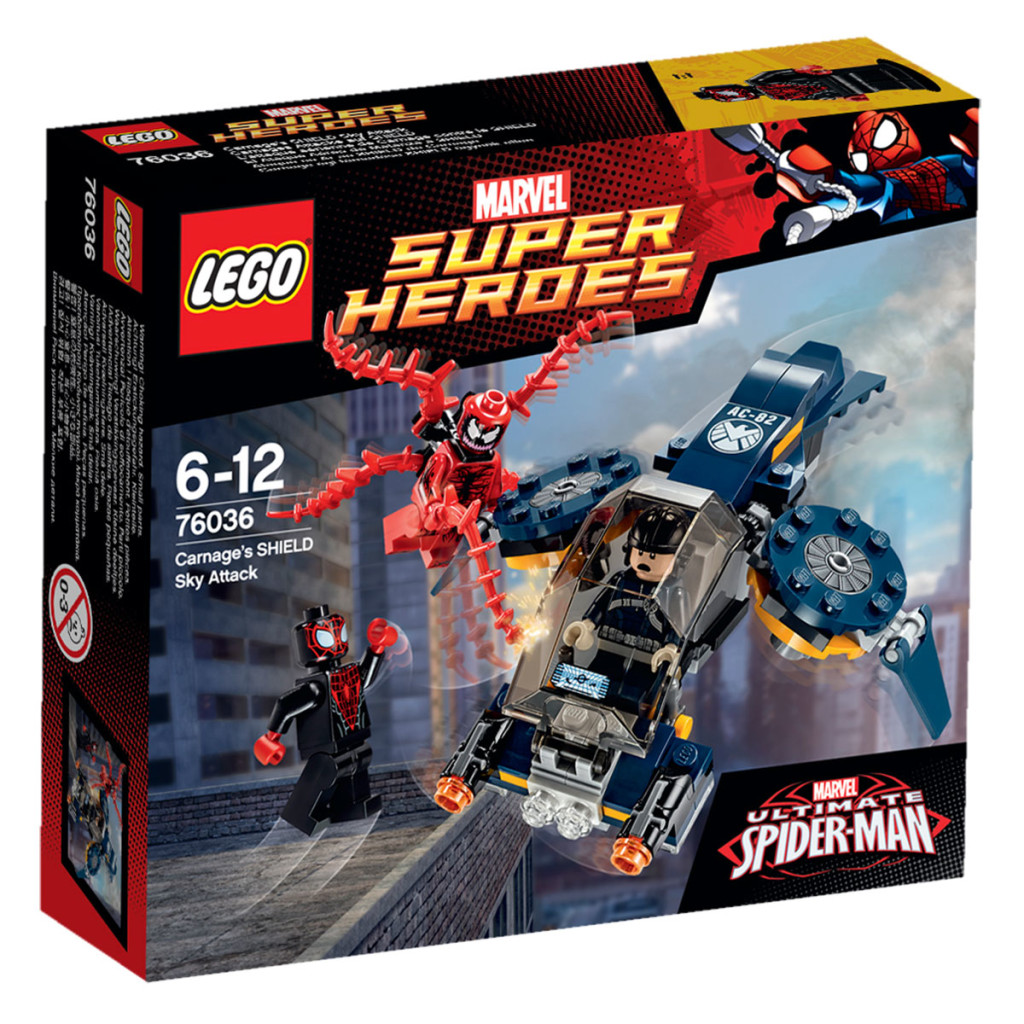 The set’s attractive $20 price tag places it firmly in impulse-buy category and with a plethora of 20% off sales recently, it was a no-brainer picking this set up. These small Super Heroes sets are as basic as they come and typically contain several in-demand licensed characters which almost always make these sets excellent buys. 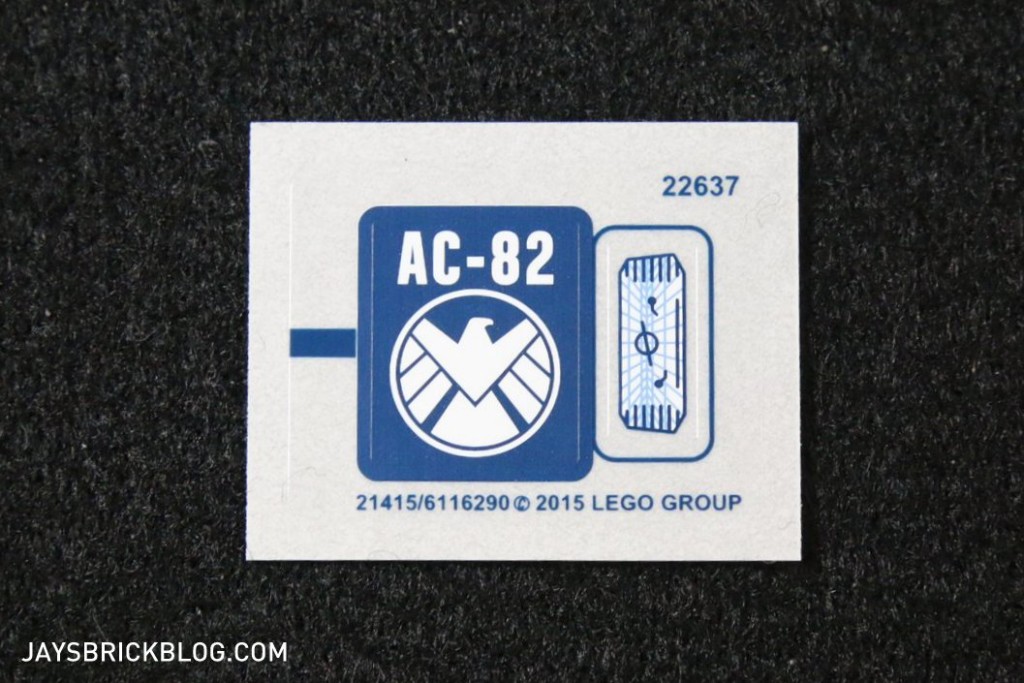 Here’s the small sticker sheet included in the set. 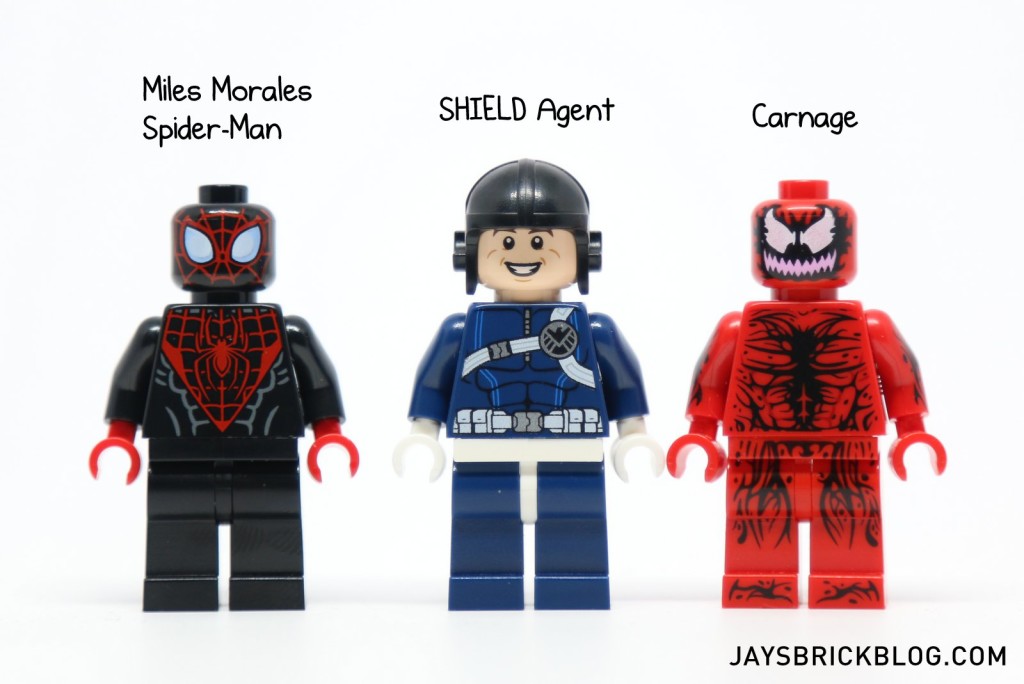 The minifigures are undoubtedly the main draw of the set and all of them are exclusive to Carnage’s SHIELD Sky Attack. The Miles Morales Spider-Man and Carnage stand out as the most exciting minifigures in the set.

Looking at the lineup, even if you only get these minifigures, it almost seems like a decent deal thanks to the set’s very affordable price tag. Let’s take a closer look at each minifigure. 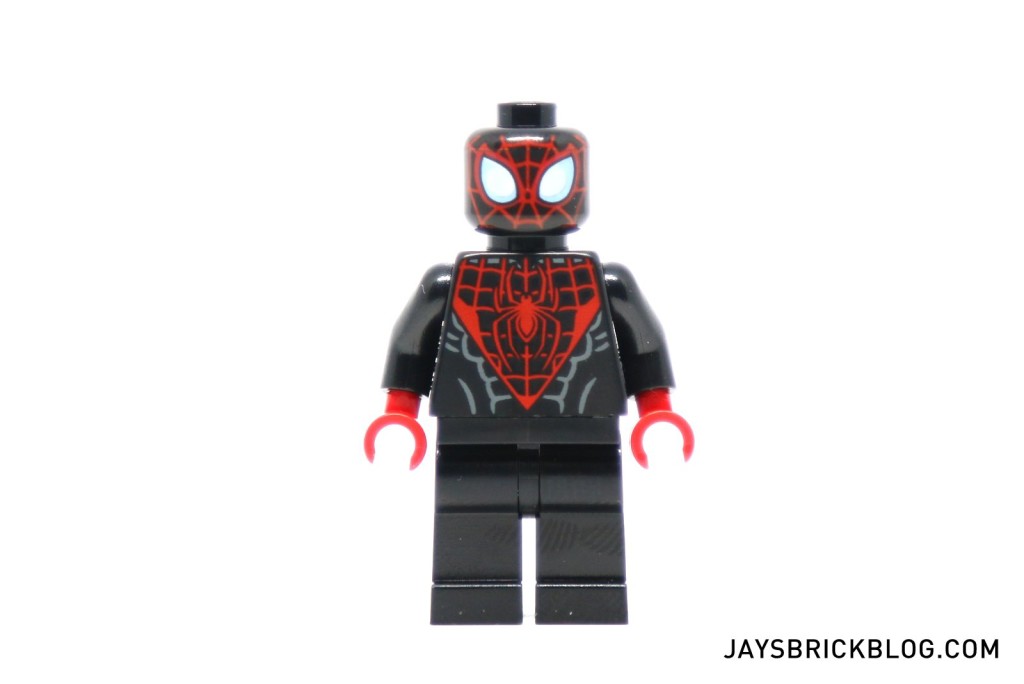 Miles Morales made headlines when he was unveiled as Peter Parker’s replacement in Marvel’s Ultimate universe but has recently cemented his position in Marvel Comics after the recent announcement that he would be ascend to permanently become Spidey in the coming months in the main universe.

The recent news is huge and should make this minifigure even more popular with Marvel fans. I am a big fan of the minifigure’s design – the bold red and black suit is brilliantly detailed and there’s not a single thing I dislike about it. 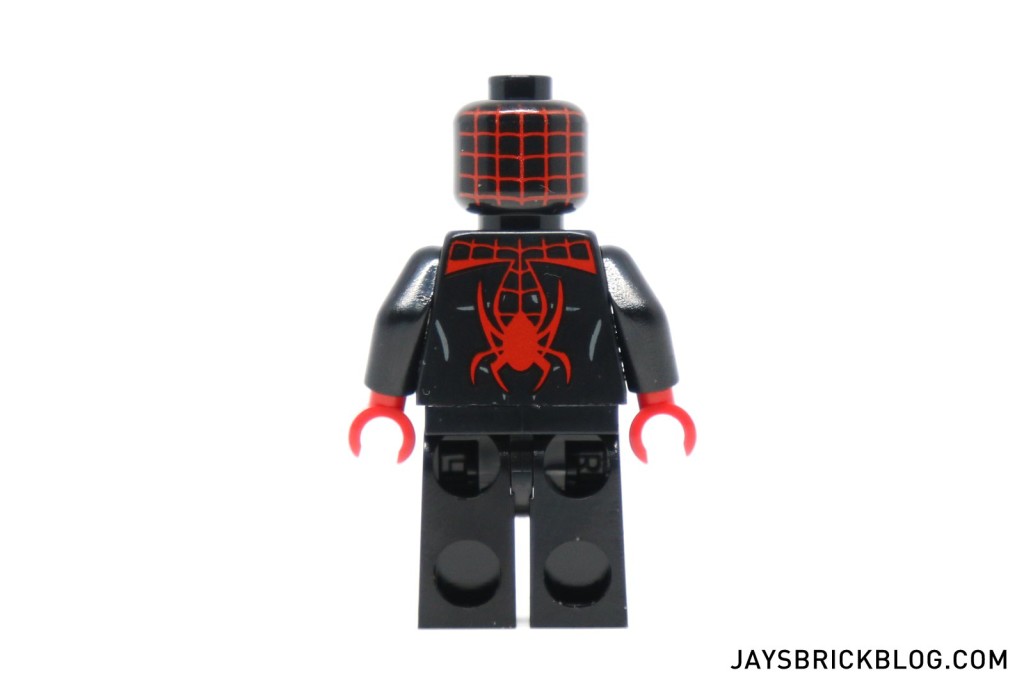 The printing on the back of his head and torso are equally as detailed and look very impressive indeed.

More than anything, I’m just glad that we have a different Spider-Man minifigure. If you collect Marvel Super Heroes sets, it wouldn’t be too far fetched to assume that you probably have about 5 or 6 of the same Spider-Man minifigs taking up space in your collection.

Small flaws such as the discoloration on Spider-Man’s white eyes have been fixed, which is quite a big deal to me. Looks like I’m now a member of the Miles Morales fan club. 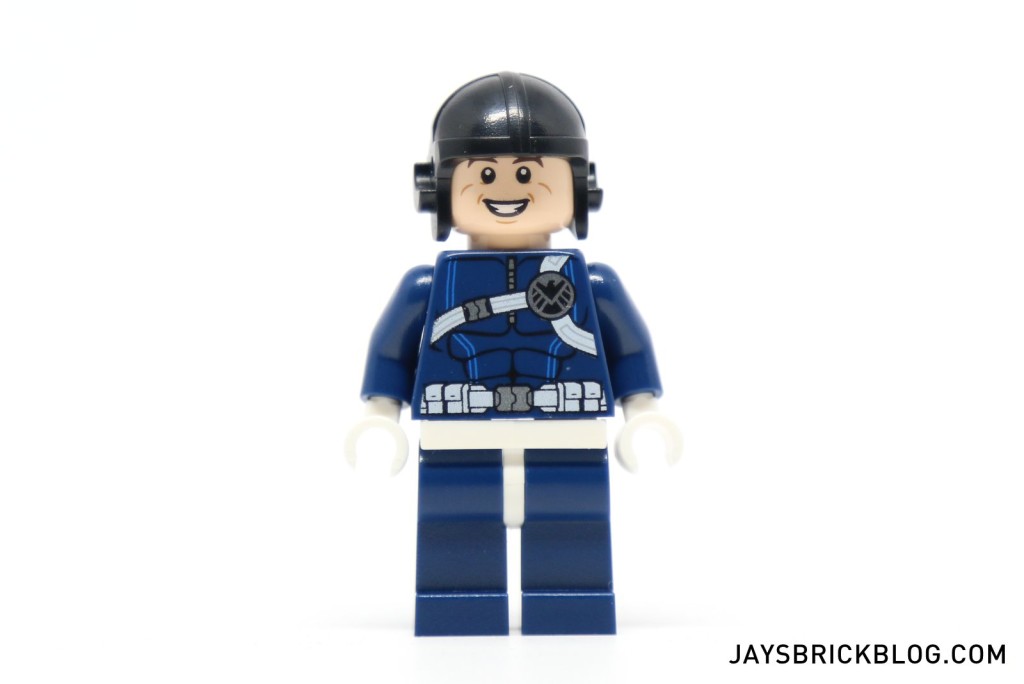 This is the nameless SHIELD Agent included in the set. His lack of a distinct identity is by no means a negative as he’s a pretty snazzy looking minifigure. This is the very first SHIELD Agent minifigure in LEGO’s history which is a landmark achievement of its own!

I’m a big fan of the Agents of SHIELD so I’m delighted that we FINALLY get a SHIELD Minifigure. He’s got a generic cheerful face with just the right number of facial lines and a fairly detailed torso which proudly features the SHIELD logo on his left breast. 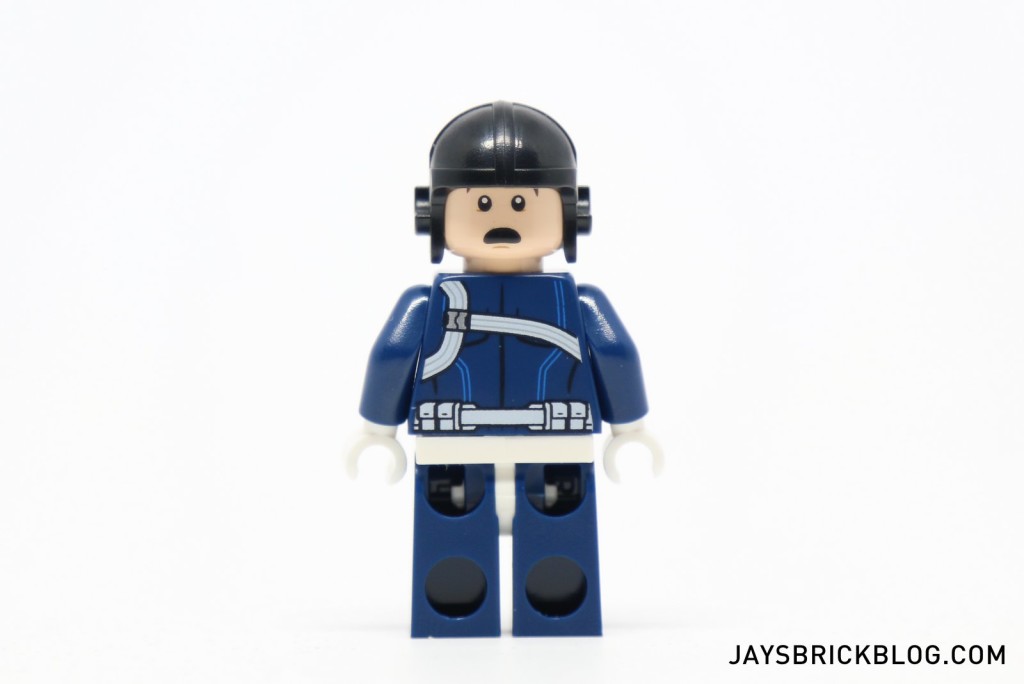 As an added bonus, the SHIELD Agent has an alternate surprised face, which is kind of adorable in its own way. Back printing is present with extended printing of his holster and belt.

The SHIELD Agent more than holds his own against the other more illustrious minifigs in this set. Being the very first LEGO SHIELD Agent is yet another positive about this set and is another great expansion of the LEGO Marvel universe.

LEGO, I really want a battle pack containing nothing but SHIELD Agents. Get on it! 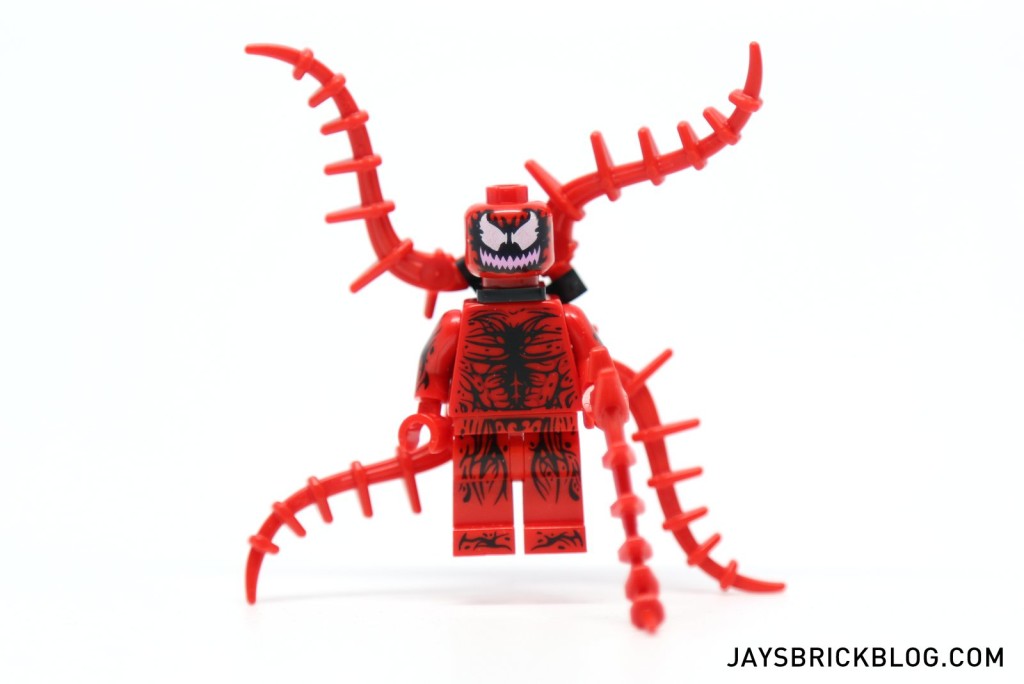 Last but not least is the star of the set and one of Spider-Man’s most iconic villains – Carnage! When I first assembled the minifigure, I was blown away by the level of gruesome detail etched into the minifigure. His body printing is terrifyingly detailed and he immediately makes a very imposing impression right from the get go.

I was also honestly very surprised that LEGO approved such a graphic and scary looking minifig. The black sinews on his torso and legs are so grotesque and nightmarish in a way that you wouldn’t normally expect from an official LEGO minifigure. Which isn’t a bad thing at all since he looks so kick ass. 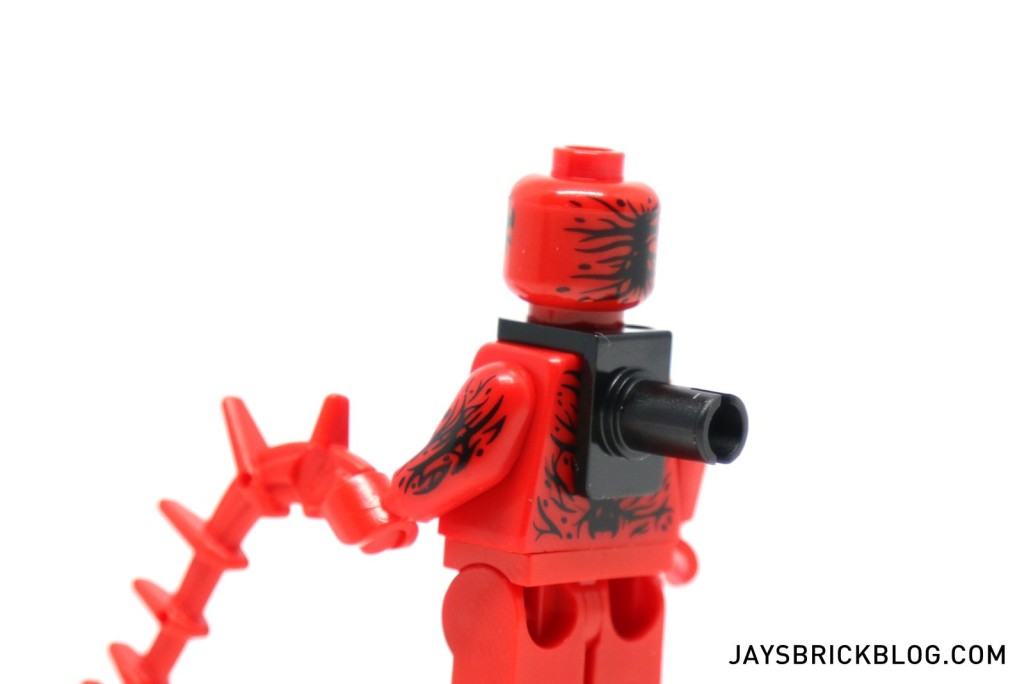 Carnage’s bright red Symbiote appendages are attached to his body thanks to this neckpiece connector, which I believe is relatively new since I haven’t come across anything like it before. In this photo, you can also see the terrific arm printing, which adds a whole new awesome dimension to the minifig. 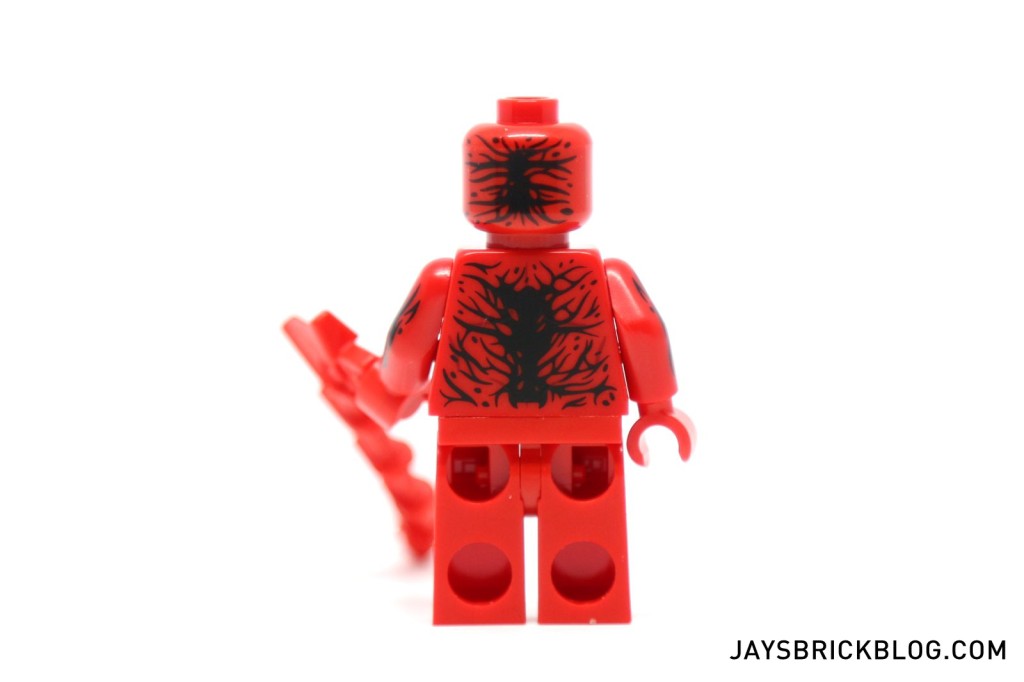 Here’s a look at the back of Carnage’s head and body, which also have more printing.

Carnage is so close to being the perfect minifigure, but there is one minor flaw – a slight pinkish tinge in his eyes. Despite that small imperfection, Carnage is an amazing minifigure that’s worth the price of this entire set alone. Huge brownie points for LEGO for including him in such an affordable set. 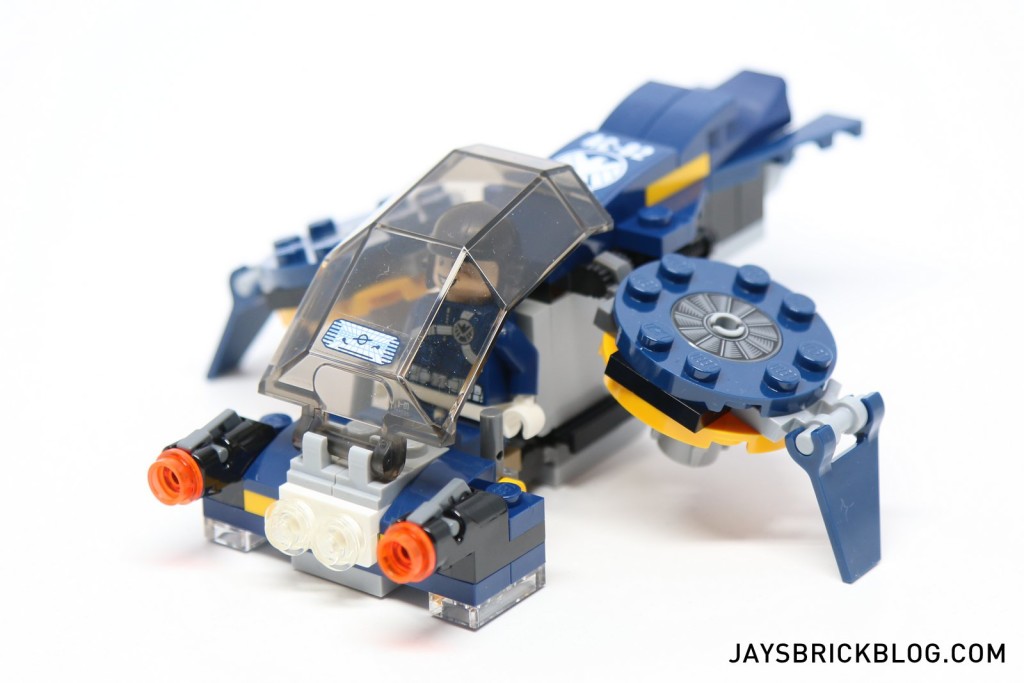 I could’ve ended my review with the minifigures and I will still thing that it would be a decent buy – that speaks volumes of the pedigree of minifigs included in the set. But that’s not all! The set also includes an awesome looking SHIELD Jet Flyer piloted by the SHIELD Agent.

The jet flyer sports a tight and very eye-catching design, it almost looks like a miniature Quinjet designed for solo agents. Like everything from SHIELD, the jet flyer’s dark blue colour scheme punctuated by yellow and grey accents.

The twin stud blasters at the front of the vehicle, even manage to look great and not chunky at all. 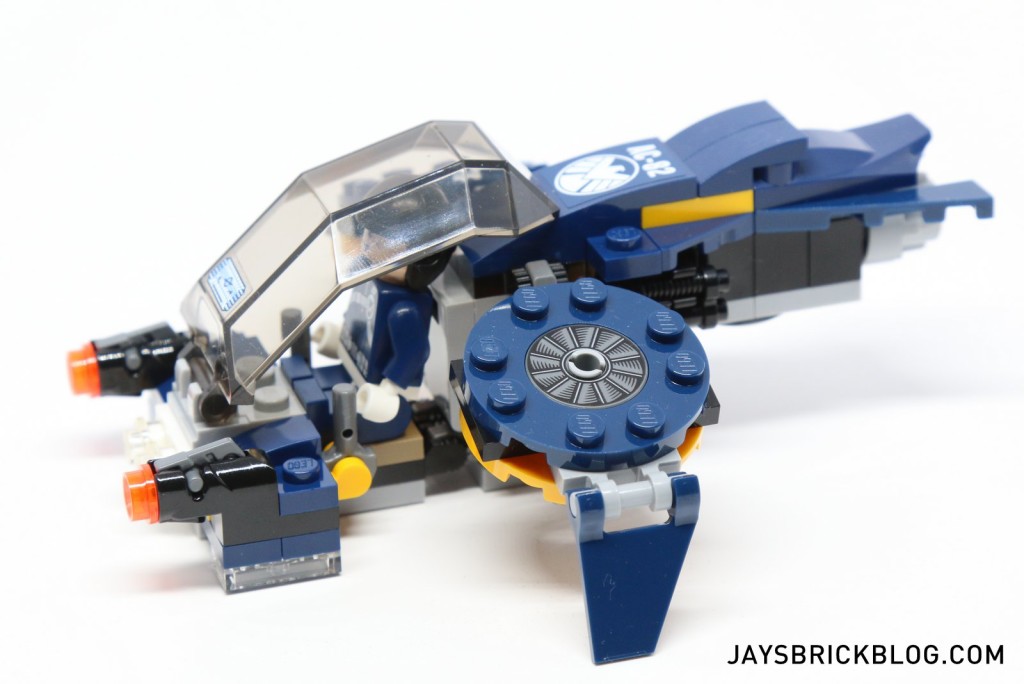 Despite being tucked away in a small set, the jet flyer doesn’t seem like it was cobbled together using a bunch of surplus bricks and elements. It has a nuanced design, with a great mix of curves and angles in all the right places.

Yes, that round doughnut tile is printed if you were wondering! 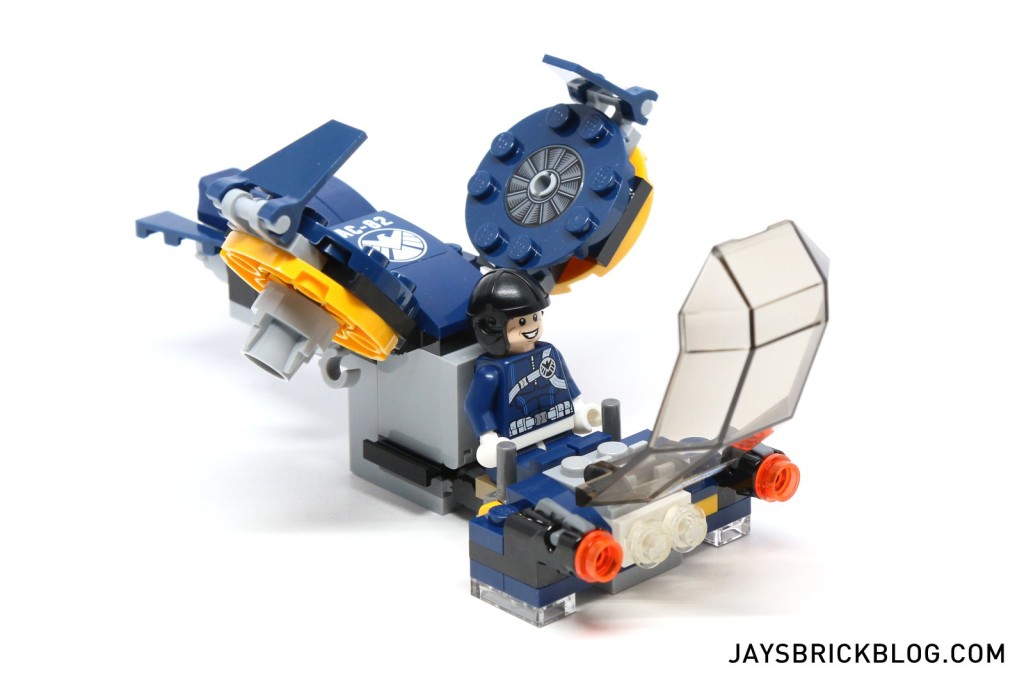 Looking great is just one half of the story – the SHIELD jet has some cool play features built in, such as the ability to open the cockpit and adjust the thrusters and flaps. It may not seem like much, but for a personal jet, I really enjoyed adjusting the thrusters to simulate different landing or flying poses. 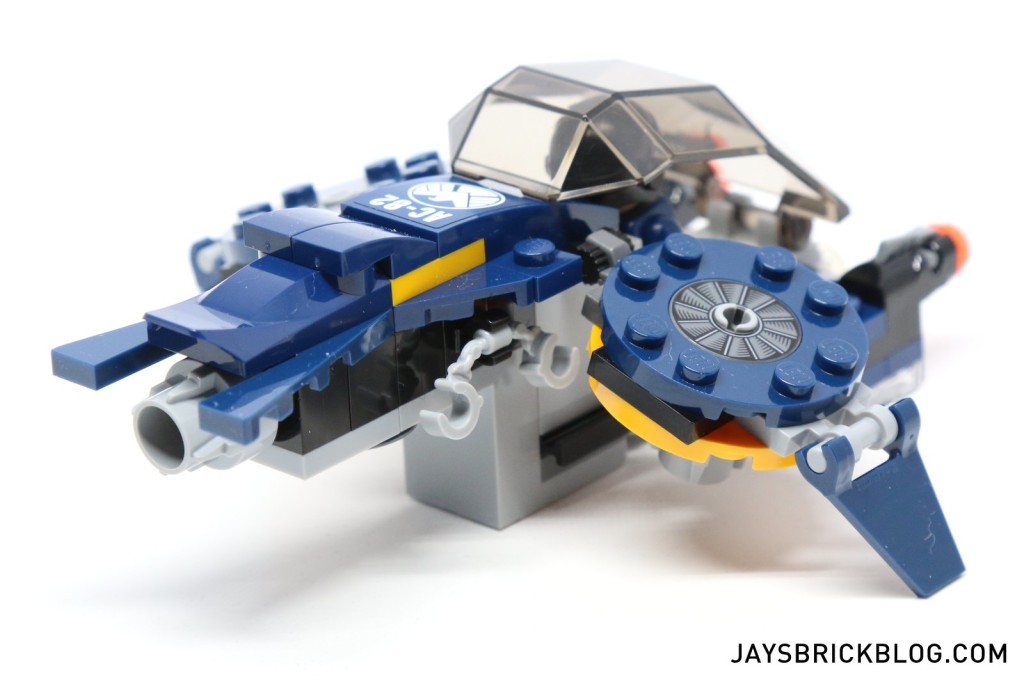 Here’s a look at the back of the jet flyer, which shows you the clip to store handcuffs and a blaster on the other side.

I really like the mini SHIELD jet – it makes smart use of a small number of parts to pull off a very slick looking futuristic vehicle. You know, I like this jet so much that I am actually considering purchasing more of this set just to get more jet flyers and SHIELD Agents. I can easily offload Carnage and Spider-Man with ease online to recuperate the costs. 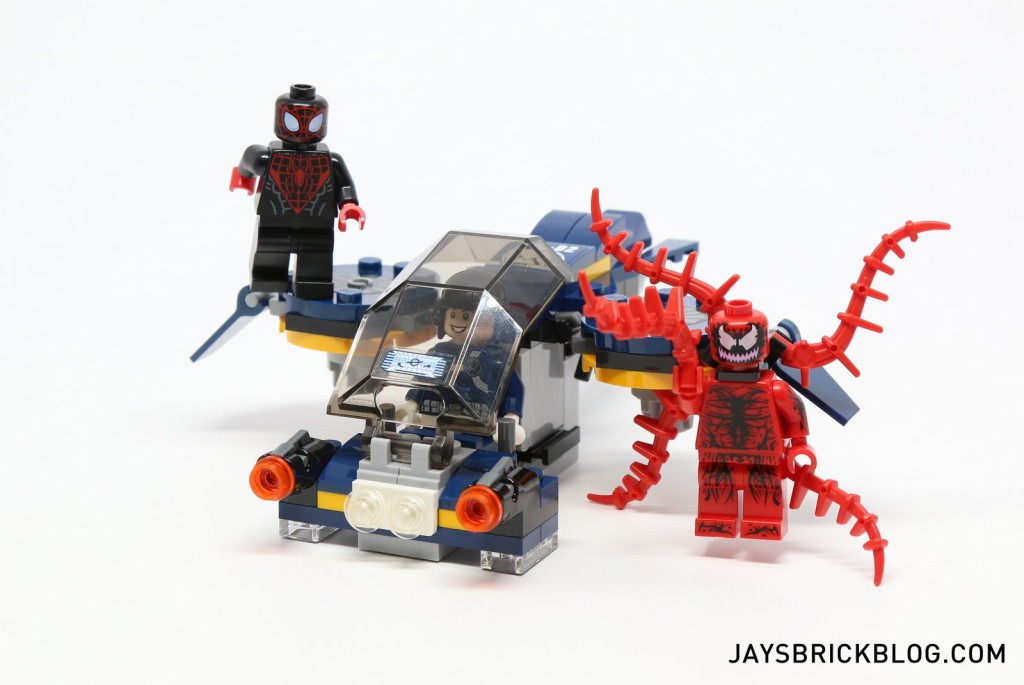 Final thoughts: I love reviewing sets like Carnage’s SHIELD Sky Attack – it makes it so much easier translating my thoughts into words when the entire experience is such a positive and pleasing one. Make no mistake, people will buy this set purely for the minifigures and I’m glad to say that they will not be let down. Miles Morales (in light of his ascension in the Marvel universe) is an incredibly cool minifigure to add to the ever-expanding LEGO Marvel universe.

Carnage is in a class of his own – the LEGO designers have truly captured the essence and grotesque appearance and translated them beautifully into minifigure form. The SHIELD Agent is another great minifigure and essential soldier-type minifigure that LEGO Marvel’s universe desperately needs.

LEGO could’ve just included twenty 2 X 4 red bricks in this set and I would’ve still bought it in a heartbeat. The addition of the SHIELD jet flyer is yet another feather in this set’s cap. Its slick futuristic design makes it a very attractive looking vehicle that can hold its own against vehicles or models in sets that are twice or thrice the price of Carnage’s SHIELD Sky Attack.

Carnage’s SHIELD Sky Attack is one of those rare ‘unicorn‘ LEGO sets that has not a single thing going against it. It’s affordable, packed with three great minifigs and an awesome looking jet – features of an exceptional LEGO set. I highly recommend this set if you’re a big fan of Marvel Super Heroes.