If you’ve been following my blog for awhile, you could’ve probably clued in to the fact that one of my favourite licensed themes is DC Super Heroes. I’ve always preferred DC over Marvel, and I cannot wait for the upcoming Batman v Superman movie that opens in Australian cinemas on 24 March 2016.

I think it’s going to be a smash hit and I am extremely excited about the prospect of seeing the Batfleck in action.

LEGO and DC Comics have worked together on three initial LEGO sets that will tie in with the upcoming Batman v Superman movie, a rather modest selection but there are rumours swirling of another set that will make an appearance in the second half of 2016.

I’ve picked up the entire wave of Batman v Superman sets, and I’ve decided to start small with a review of 76044 Clash of the Heroes! 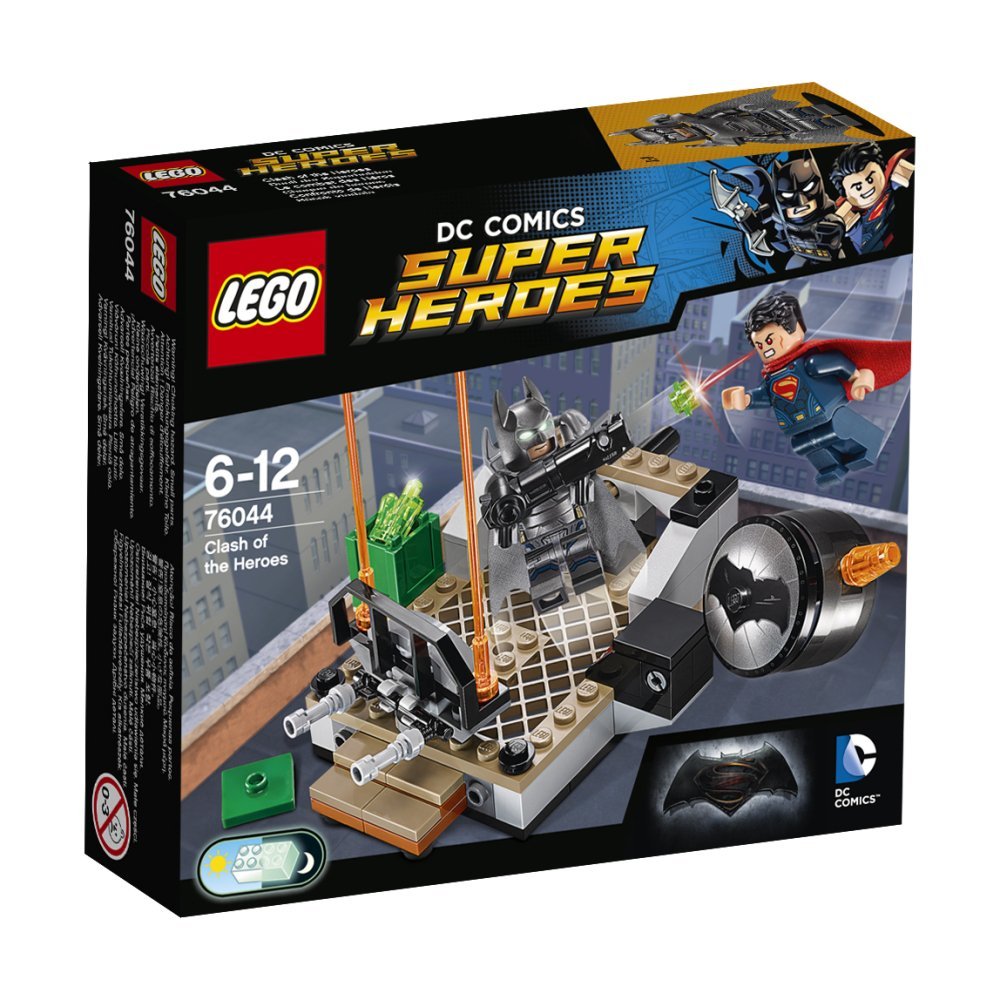 Clash of the Heroes is the smallest Batman v Superman set, but don’t let its diminutive size fool you, it packs quite a punch and is one of the most satisfying small sets that I’ve put together in recent times.

The LEGO Super Heroes theme (both Marvel and DC) are notorious for making you buy multiple sets to collect all the main characters but Clash of the Heroes does away with all of that that by including two of the main juggernauts of the movie in a very affordable set. 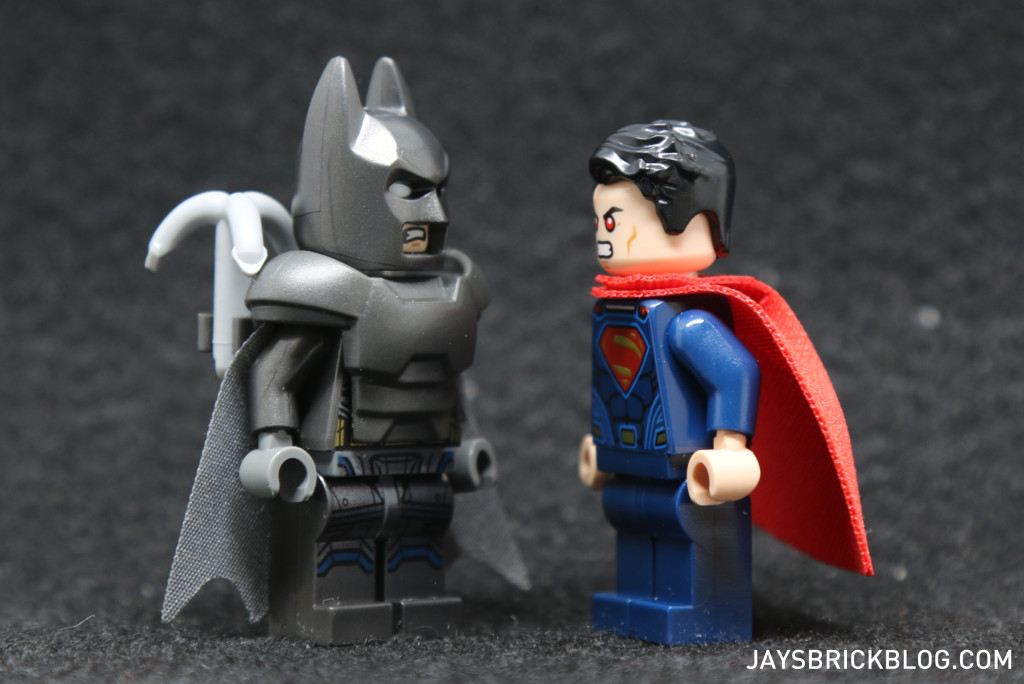 Batman v Superman is probably going to contain a lot of superhero action goodness along with a “will they, won’t they” romantic bromance subplot between the Dark Knight and the Man of Steel but for this set, DC’s two premiere heroes are forced to face each other down in a class of epic proportions.

At AU$20, I really love the value contained in this set – you instantly get both titular characters, which is a huge win for minifigure, hardcore or even casual LEGO fans looking to own a small part of the movie. 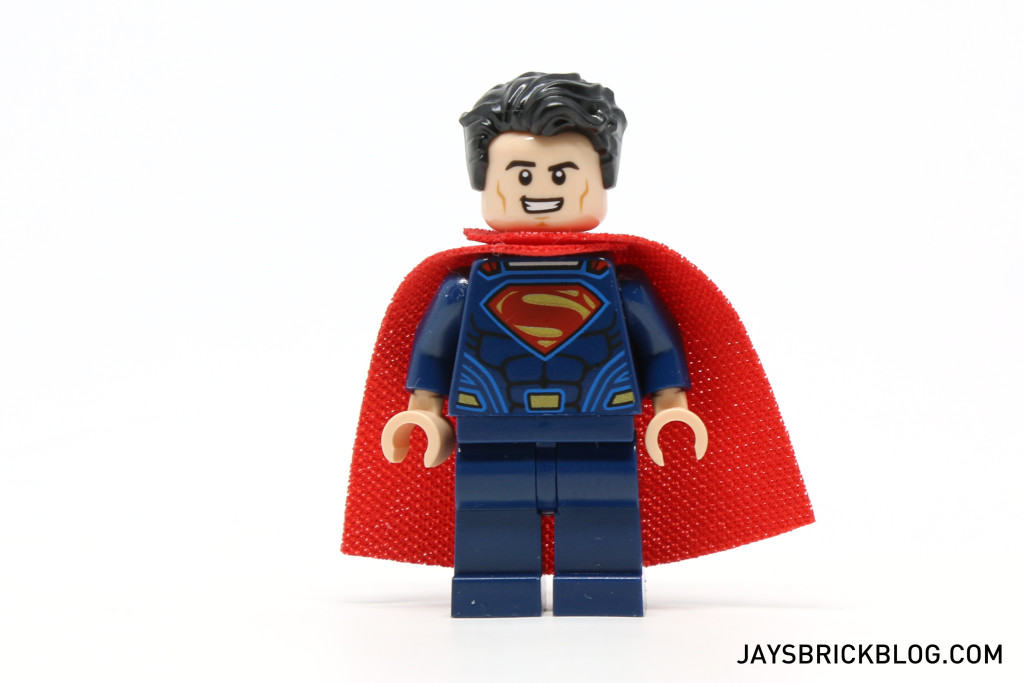 The Superman minifig features Kal-El in his brand new suit, which is mostly dark blue with bright blue accents lining key areas such as the Superman crest and his waist. Superman has an oddly goofy smile that feels a little out of place in a set that pits him against Batman. I’m not really a fan of the raised eyebrow look.

What I love is his brand new hairpiece which features a very contemporary messy looking pompadour hairstyle that eschews his iconic hair curl. It’s a great new hairpiece that’s very stylish and does well to mimic Henry Cavill’s look from the movie.

Unfortunately, Superman doesn’t have any additional printing on his legs and arms which I feel is kind of a waste since I’d appreciate some extra details to make him look more “complete”. 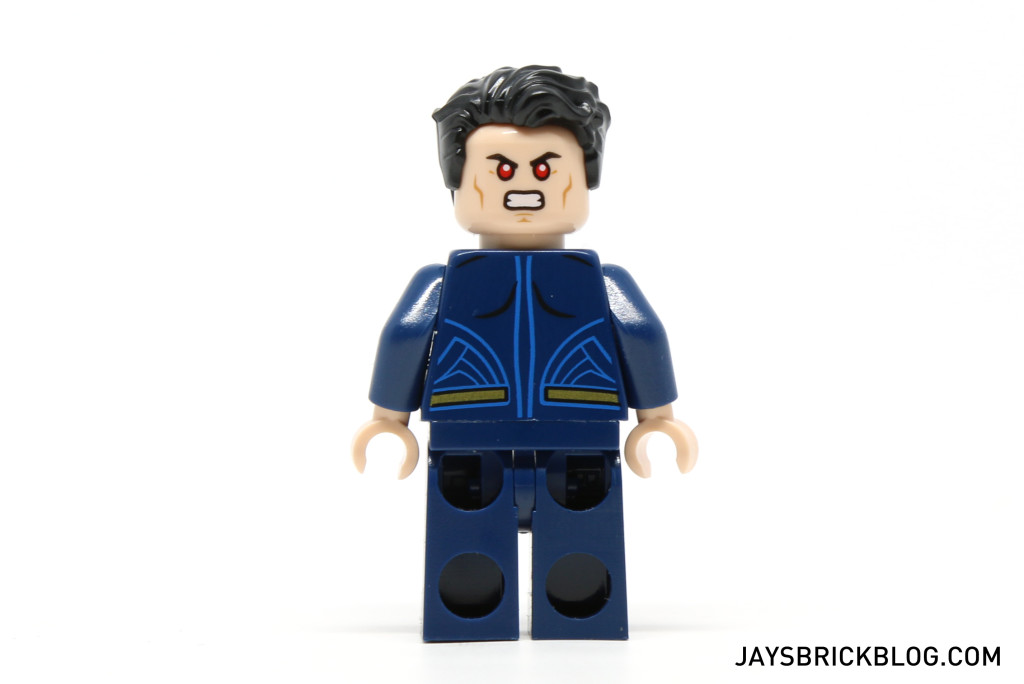 Here’s a look at the back printing, which has more of those striking electric blue lines that stretch across his spine and lower torso. I actually quite like the blue lines, although I think they’re a little too bright. They make the suit look very sleek and modern, ensuring that it looks fresh and unique, while retaining the classic Superman suit look.

Superman has an alternate face which has his eyes lit up in anger, ready to shoot laser beams at anyone who crosses him. For his red cape, the material is made out of the new-ish fabric material which has a lovely heavy texture and feel to it. 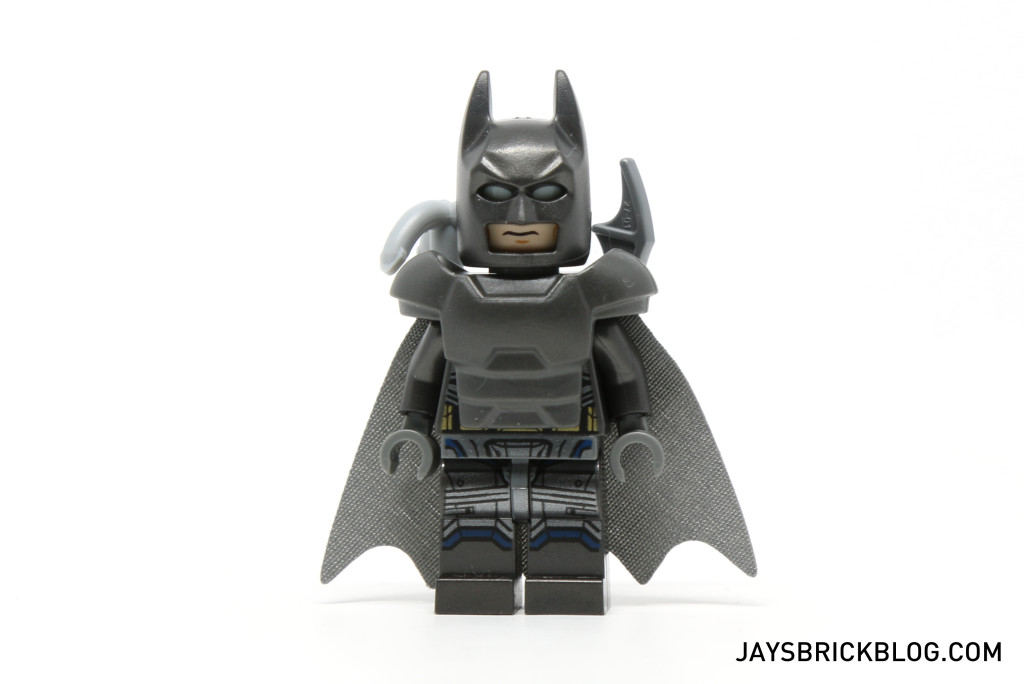 The real star of this set is Batman who is armed to the teeth with his armoured suit, ready to take on the Man of Steel. Batman has a chunky suit of armour, first seen in Series 13’s Galaxy Trooper which snugly fits over his cape. Oddly enough, Batman’s cape is made out of the starchy paper material, and not fabric.

To maintain the armoured look, we get the older version of his cowl, which has a closed chin area. Batman’s armour has 2 clips that hold a grappling hook and a new grey Batarang. 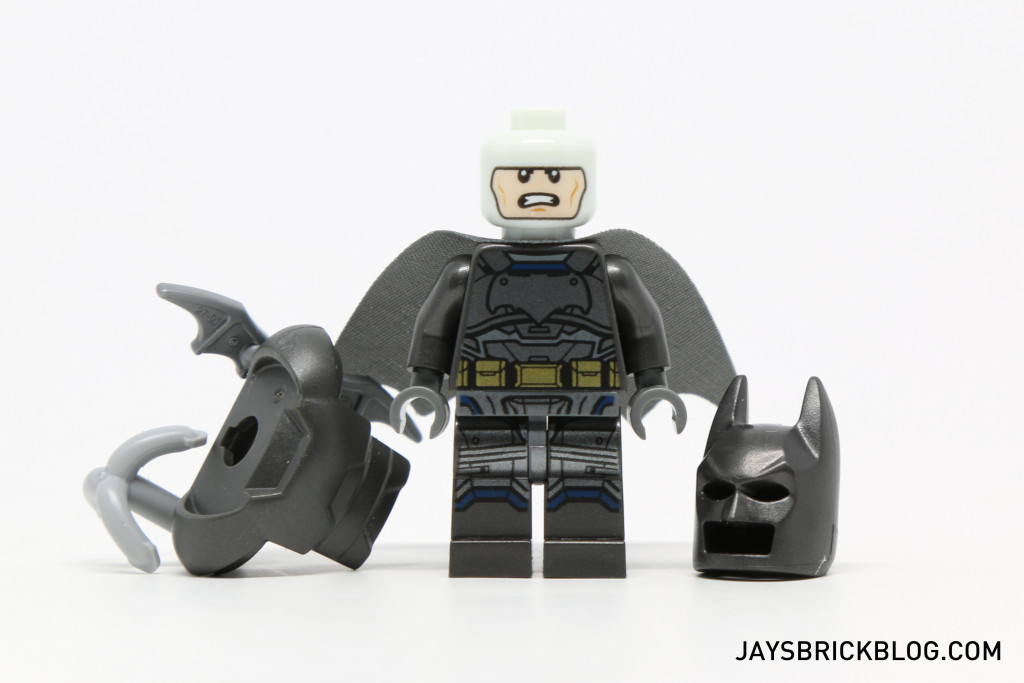 Removing Batman’s armour reveals an amazingly detailed torso and legs. The printing is incredibly sharp that goes above and beyond your regular Batman suit. This version has extra armour plating across his chest and extends down to his knees as well. It looks really cool, almost cyborg-like.

I actually like Batman without his chunky armour piece – the armour just make him look unnecessarily large and awkward, as well as hides all that glorious torso and leg printing. Batman is also made out of dark pearl grey, giving him a really nice, almost metallic shimmer. 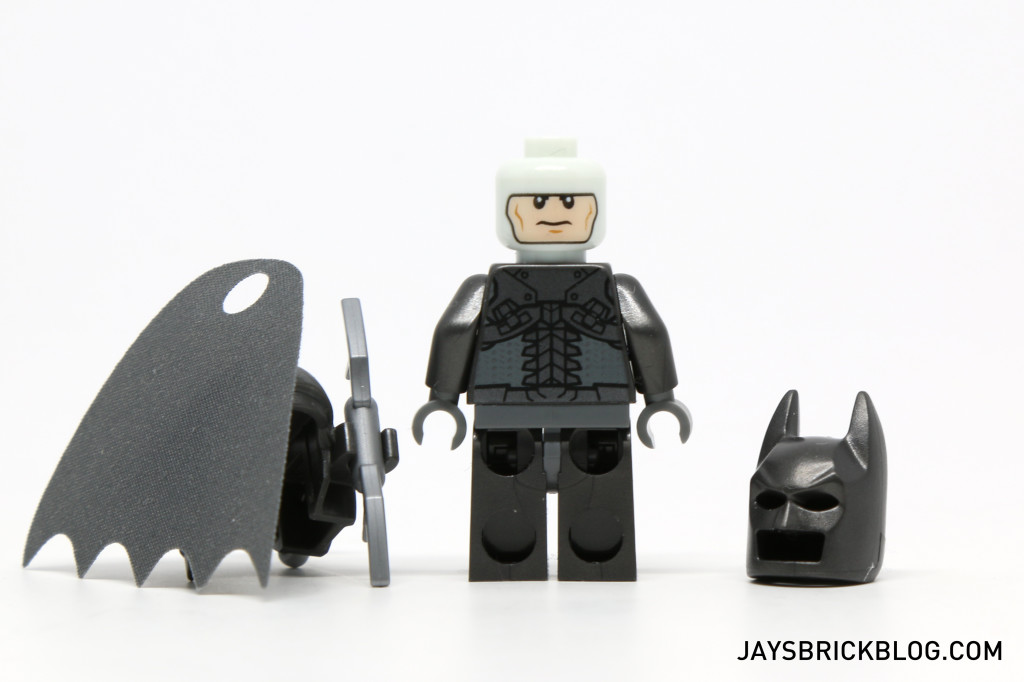 Here’s a look at the back printing, which again is breathtaking. I really love the armoured bits and reinforced spine. Batman has a new head look, and I’m glad that they’ve done away with his silly “headband” for this version. He looks more like a Stormtrooper as only a small portion of his face is revealed. 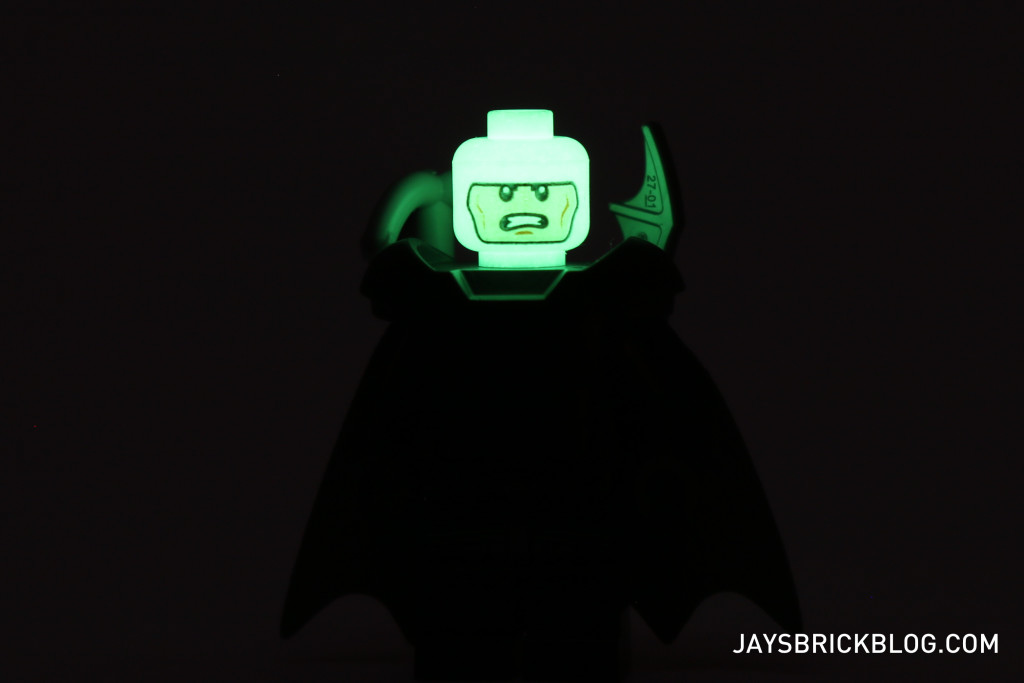 Batman’s head has all that white colour because it glows in the dark! It’s a really unique effect and looks absolutely brilliant. 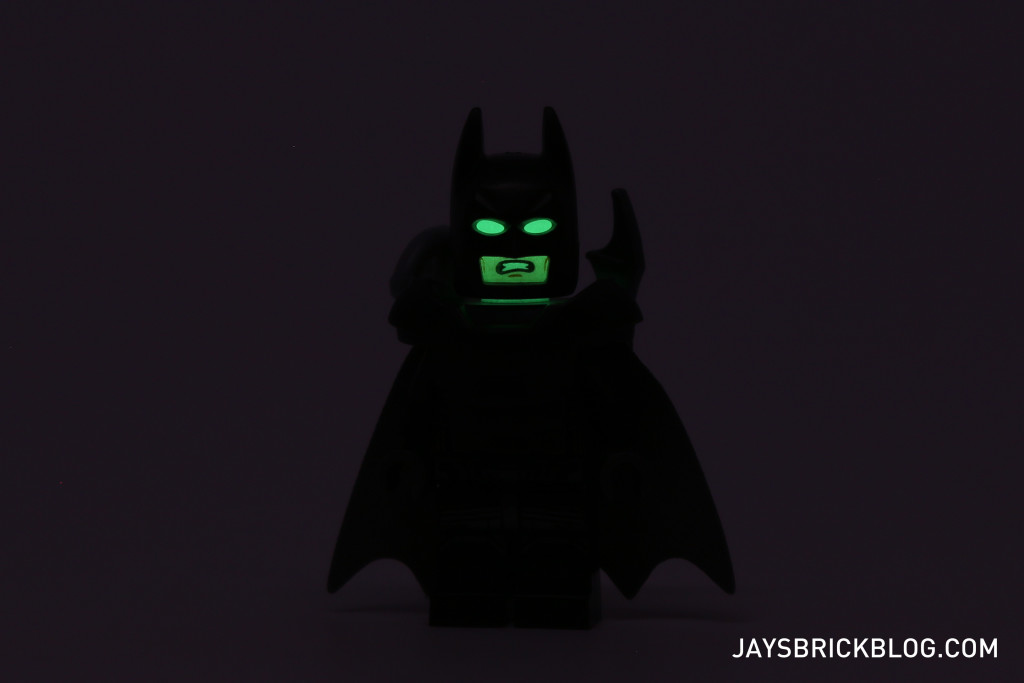 The overall design is to recreate his shining eyes look from the movie and the glow in the dark element achieves surprisingly well. 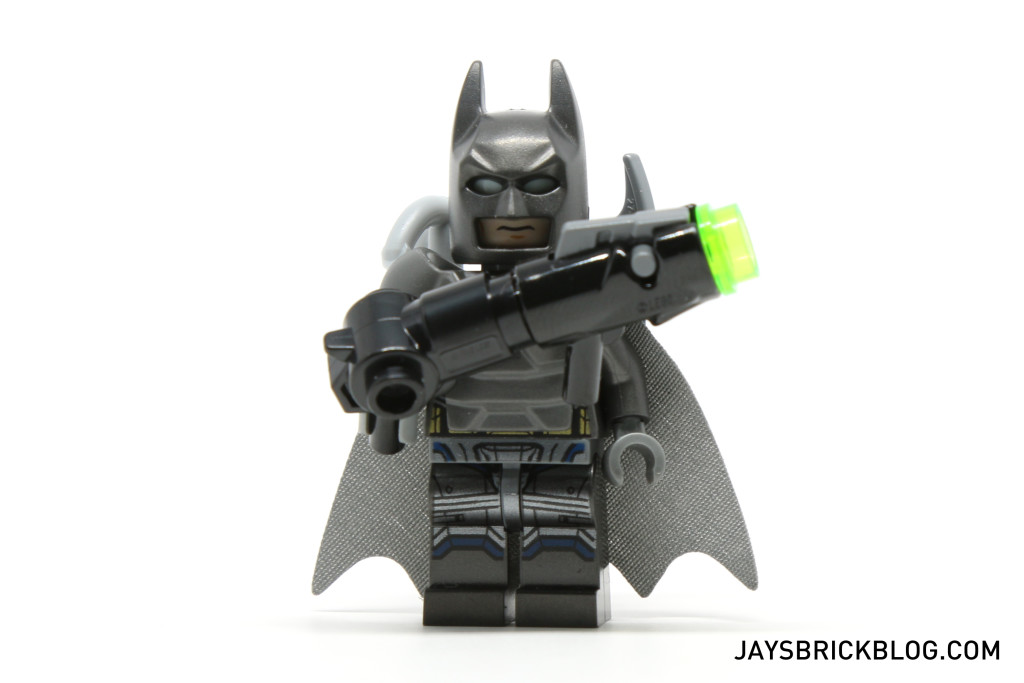 Batman is packing a lot of heat, wielding what seems to be a Kryptonite bazooka which fires a trans-green stud using a stud blaster piece attached to the handle. Pretty sure this counts as a gun designed to hurt Superman… so I’m not too sure how Zack Snyder and the writers are going to deal with Batman’s no-guns policy.

Both minifigs are superb, but Batman is the clear winner in this head to head matchup, coming ahead with an outstanding minifigure design that has to be one of my favourite Batmans ever. 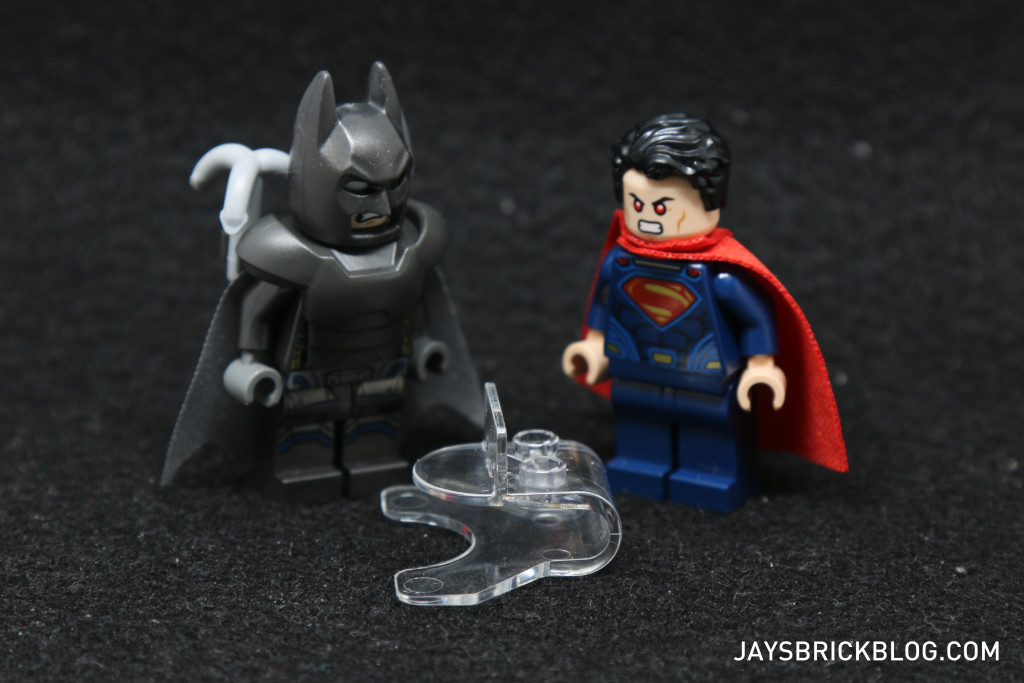 Even though Batman and Superman are feuding, they can at least agree on one thing – that the Super Jumper element is dangerous. In case you don’t know, messing around with the Super Jumper piece can damage your minifig’s legs. Read my post here to find out more and for pictures of the damage. I wouldn’t recommend ever fitting your minifigs to them. 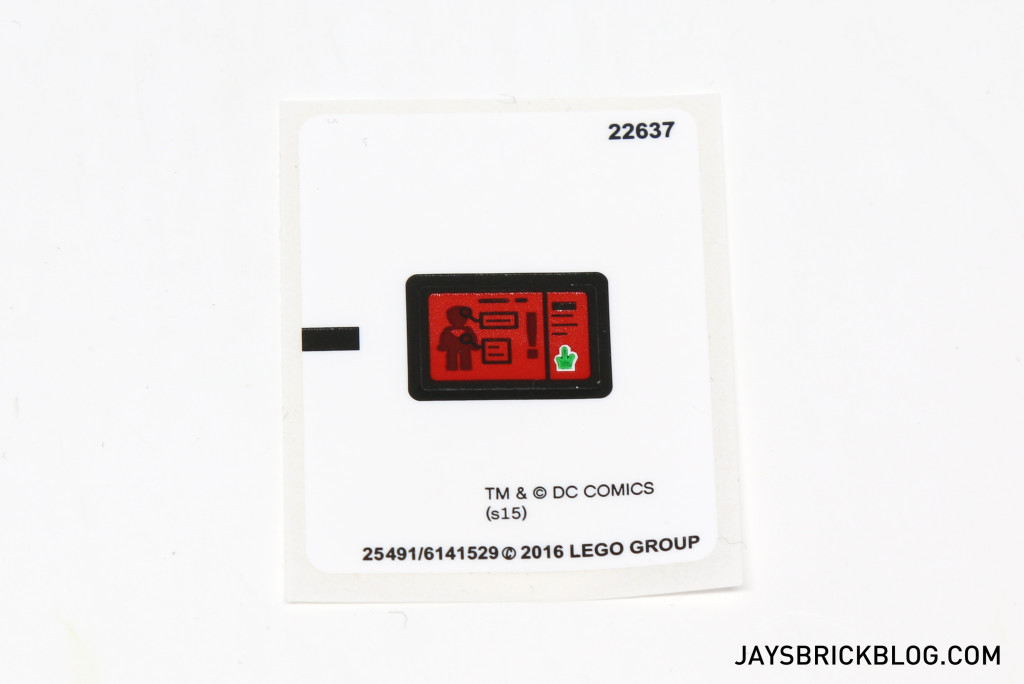 On to the main build, this set only comes with one tiny sticker, for a computer screen that highlights Superman’s weak spots and possibly suggests using Kryptonite to target these areas. 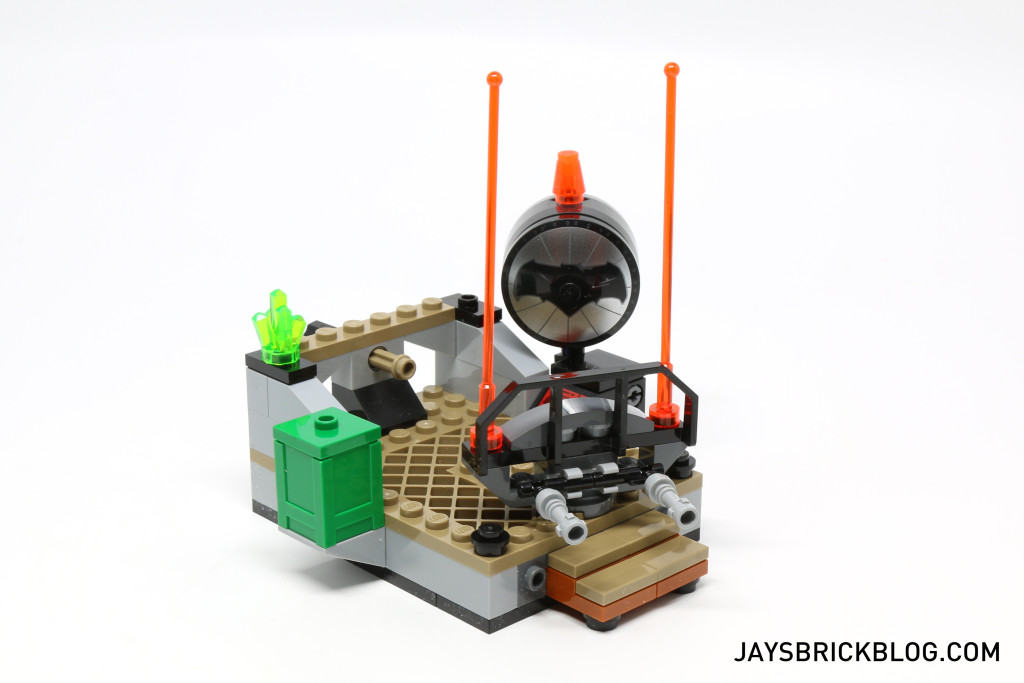 The build is a compact rooftop vignette with a couple of interactive mechanisms attached to it. It’s a small set, but this build doesn’t look insignificant at all. I’m guessing that there will be a part in the movie where Batman lures Superman to this rooftop with his Bat Signal, before springing a trap on him and ultimately immobilizing or weakening him with the Kryptonite that’s just lying around.

Apart from the Bat signal, the most prominent feature is what seems to be a laser or gun turret which has unsightly bright orange antennae that extend way too high. It’s a little jarring since it’s quite large, overpowering the entire scene. The turret is fastened loosely to the base, allowing you to swivel it around.

Let’s take a closer look at all the elements around the rooftop. 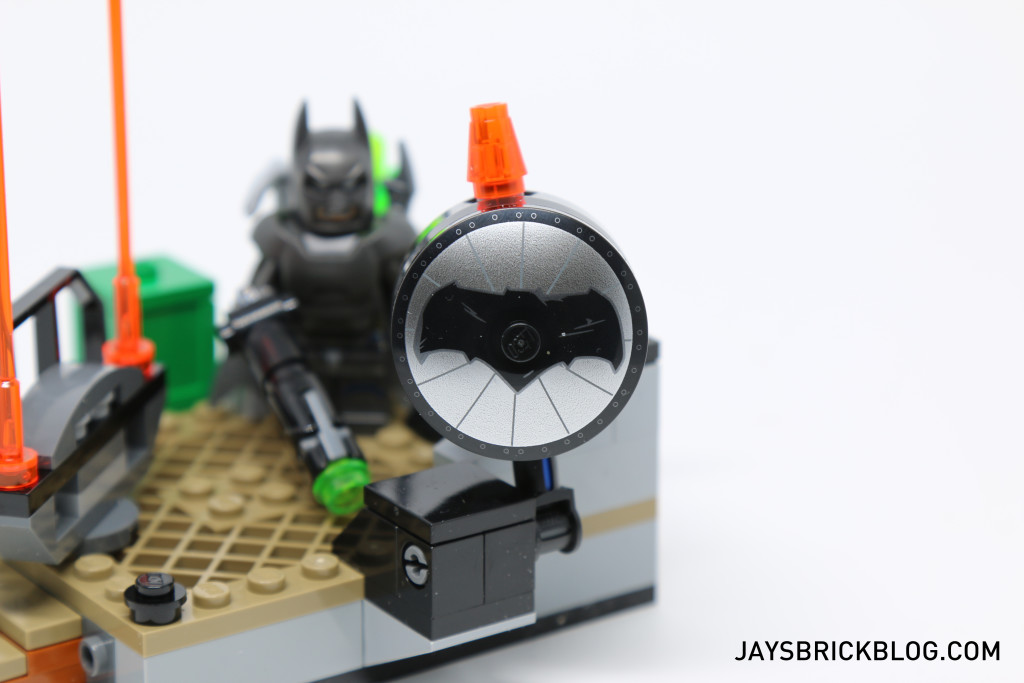 One of the most interesting components of the rooftop vignette is the Bat signal. And yes, that is a printed piece bearing the Batlogo. It’s gorgeous and I’m so glad that it’s not a sticker!

The Bat signal swivels around, and is actually attached to a flick fire missile, so you can shoot the Batsignal out at poor unsuspecting Superman. 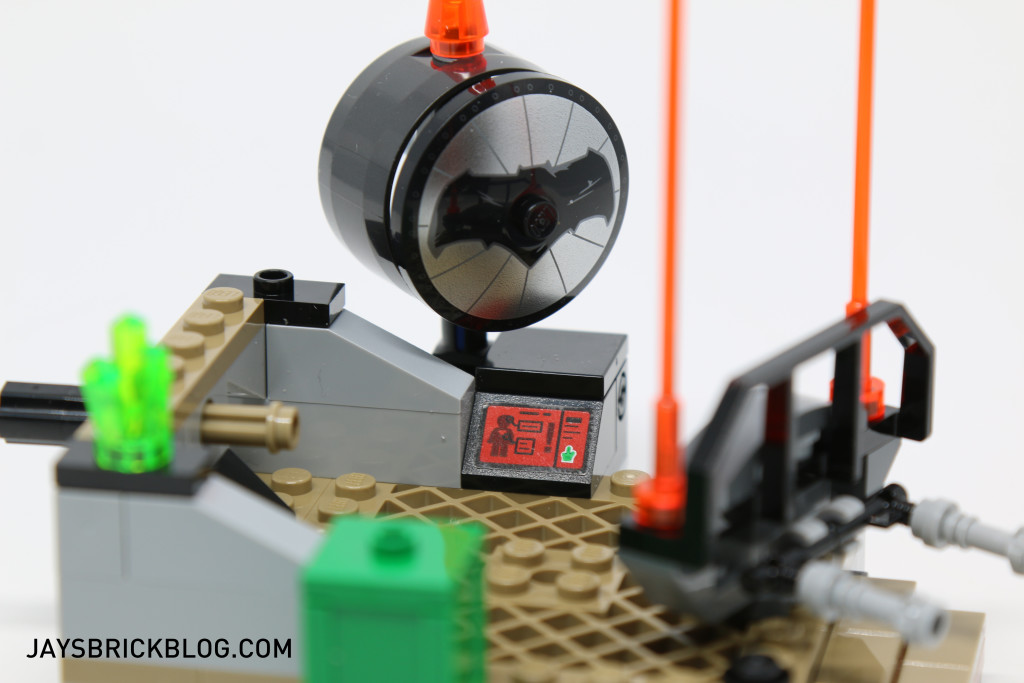 The Bat signal is attached to the small computer console. 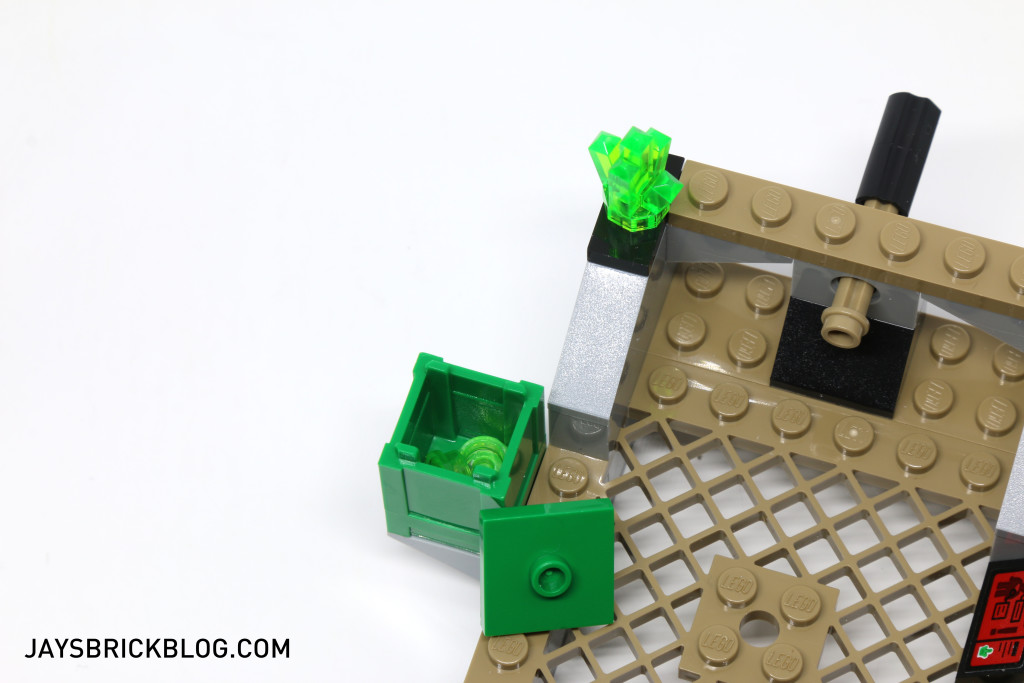 There’s a green crate, which contains what seems to be more Kryptonite ammunition for Batman’s gun as well as a casual Kryptonite crystal just hanging out on the wall. The crate in green is a pretty nice and brightly coloured element. 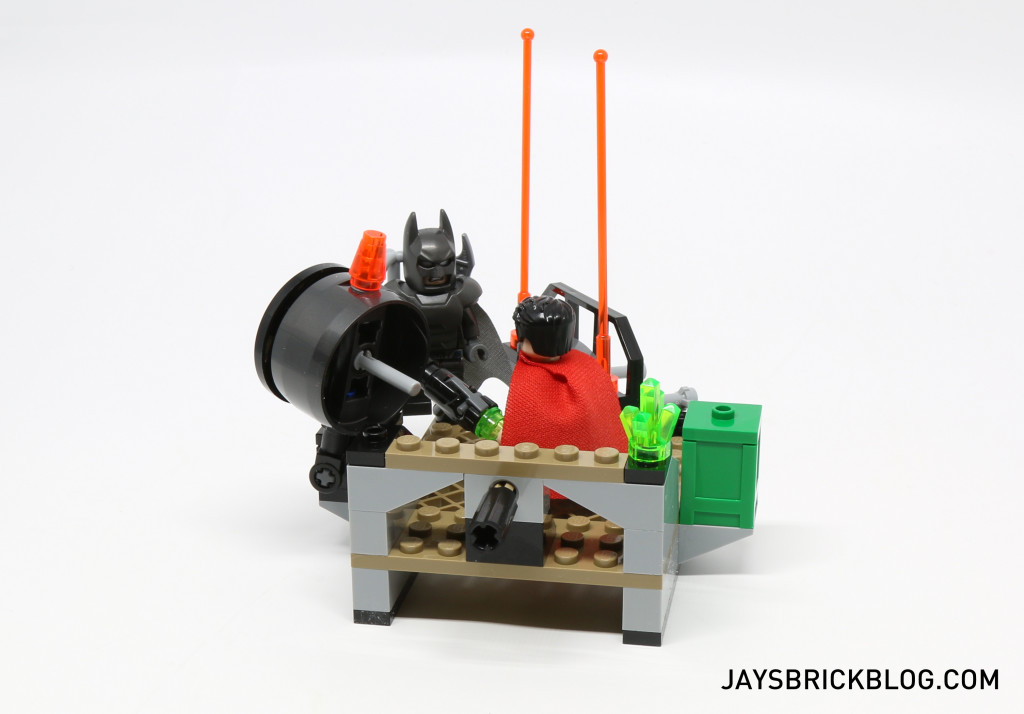 From behind, you can see a small Technic pin which contains one of the play features built into the set.

By lining up Superman and Batman in the line, pushing in the Technic pin forcefully propels Batman forward to tackle Superman. It’s not that exciting but is something that smaller kids would enjoy.

Here’s the second play feature, where you can easily use Superman to knock over the turret. You’re supposed to use the Super Jumper and aim it at the turret, but I prefer manually guiding Superman to punching Batman’s trap. 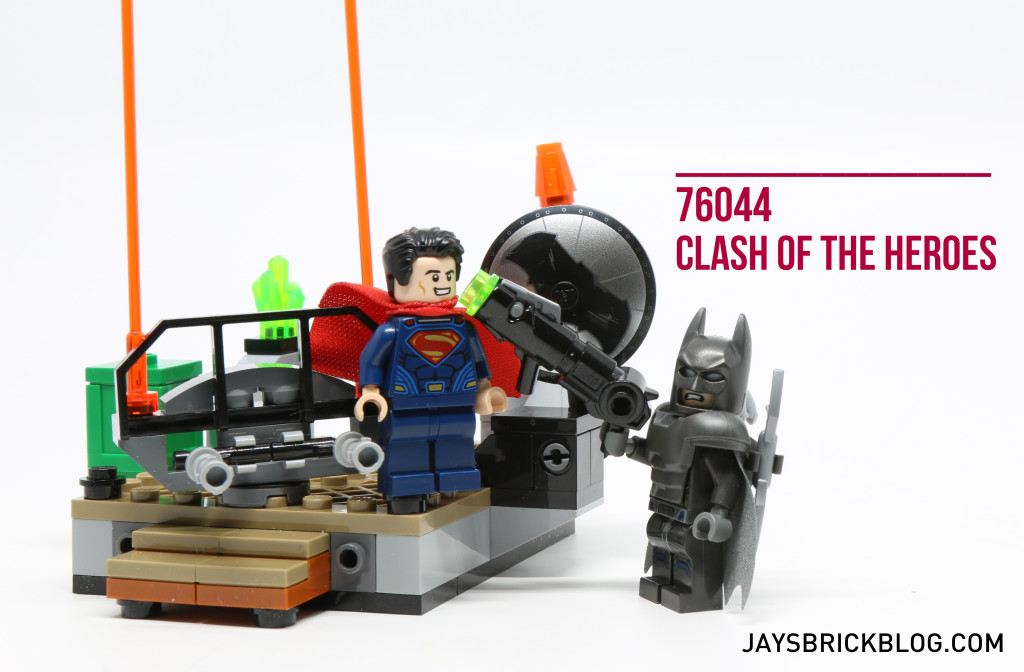 Final thoughts: For a $20 Super Hero set, Clash of the Heroes screams “amazing value”. The minifigures are definitely the biggest draw, and getting great new exclusive versions of the titular characters of Batman v Superman in an accessible set is always a good thing.

It’s such an easy set to recommend as it doesn’t burn a hole in your pocket and if you’re not a hardcore DC collector, should possibly satisfy your need for sets from the movie.

Batman steals the show with his special armoured suit and weaponry, but I still prefer him without the chunky piece of armour. The printing and design of his body is nothing short of exceptional but is unfortunately mostly hidden by the grey armour.

The vignette rooftop scene is also quite pleasant, functioning very well as a platform or vignette to display both minifigures. It’s not without flaws, I think the rooftop is a little too cluttered, mostly caused by the overly large and wide turret. I recommend removing the turret altogether, which gives you enough space to pose the minifigures against each other.

At $20, the value from this set is incredible, and when the movie comes out, should prove to be a popular set since it’s within reach of nearly everyone. With superheroes being such a huge draw at the box office, and Batman and Superman being household names, I can definitely see this set doing exceptionally well.

Even at full price, you’ll get your money’s worth with Clash of the Heroes.

Clash of the Heroes is one of the most satisfying small sets I’ve had the pleasure of owning and I cannot recommend it enough, especially if you’re a Batman or Superman fan.

Thanks for reading! Be sure to check out the Review Hub to discover more LEGO DC Super Hero reviews!