If you haven’t already, you need to go watch Black Panther. It more than reigns supreme as one of the best Marvel movies ever made, which is quite the feat given that there’s a whole decade of films to choose from.

Ryan Coogler (who also directed Creed, another favourite of mine) has done what most directors fail to do, craft a rich, character-driven narrative that doesn’t rely on huge CGI-laden set pieces to deliver a poignant cinematic experience.

The star-studded ensemble cast also acted out of their minds, making their mark on the movie that actually succeeds in making you care for the characters.

Go watch it, it’s arguably one of the best blockbusters released in recent history. And yes, we get a great villain in Killmonger, something that’s a bit of a kryptonite for Marvel movies.

To accompany Black Panther, LEGO has released 2 small sets featuring scenes and characters from the movie and I’ve opted to review the smaller set from the movie, 76099 Rhino Face-off by The Mine.

Slight spoilers in the review as I’ll compare the accuracy of the set to what was actually depicted in the movie. 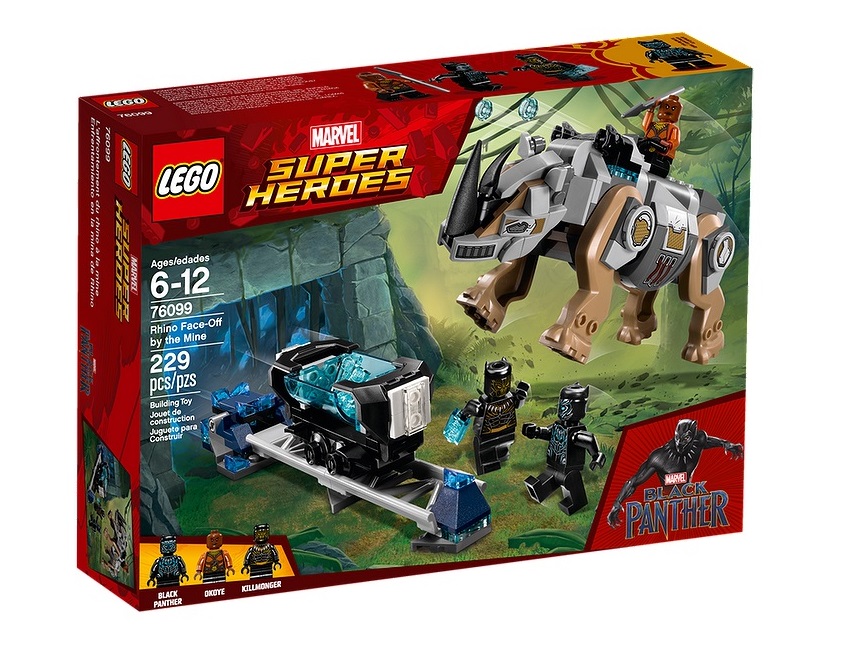 Firstly, the name of this set is so incredibly clunky and literal. It’s literally a straightforward description of what the set contains as it has a Rhino (check) and parts of a Mine (check) and there’s some sort of Face-Off between Black Panther and Killmonger. Check. 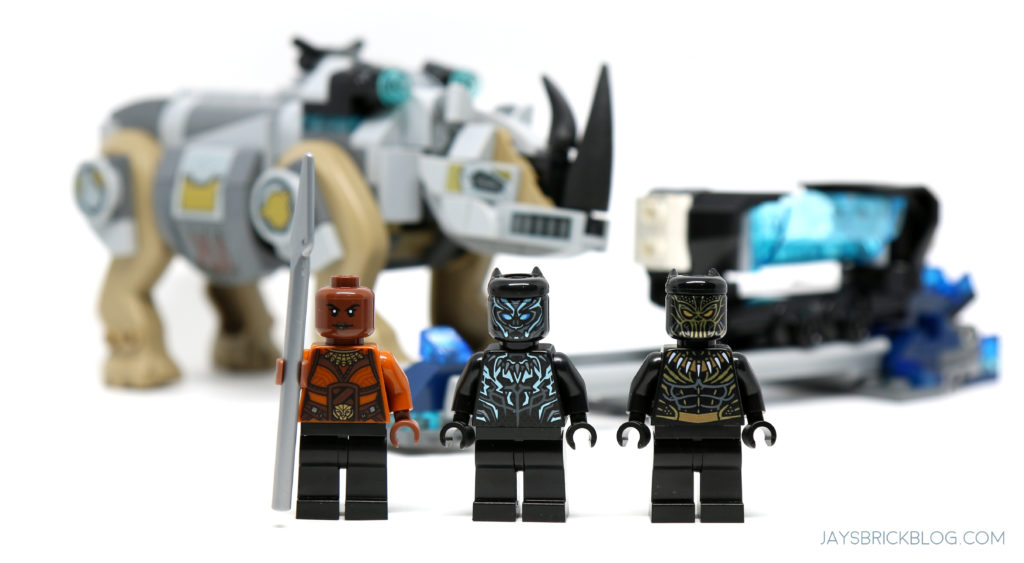 Like all small to mid-sized Marvel sets, the minifigures are often the star attractions. 76099 Rhino Face-off by the Mine includes 3 major characters from the movie, Okoye, Black Panther and Killmonger.

Great line-up, no fluff and 3 exclusive minifigures, which is I like to see from a fairly expensive small licensed set. 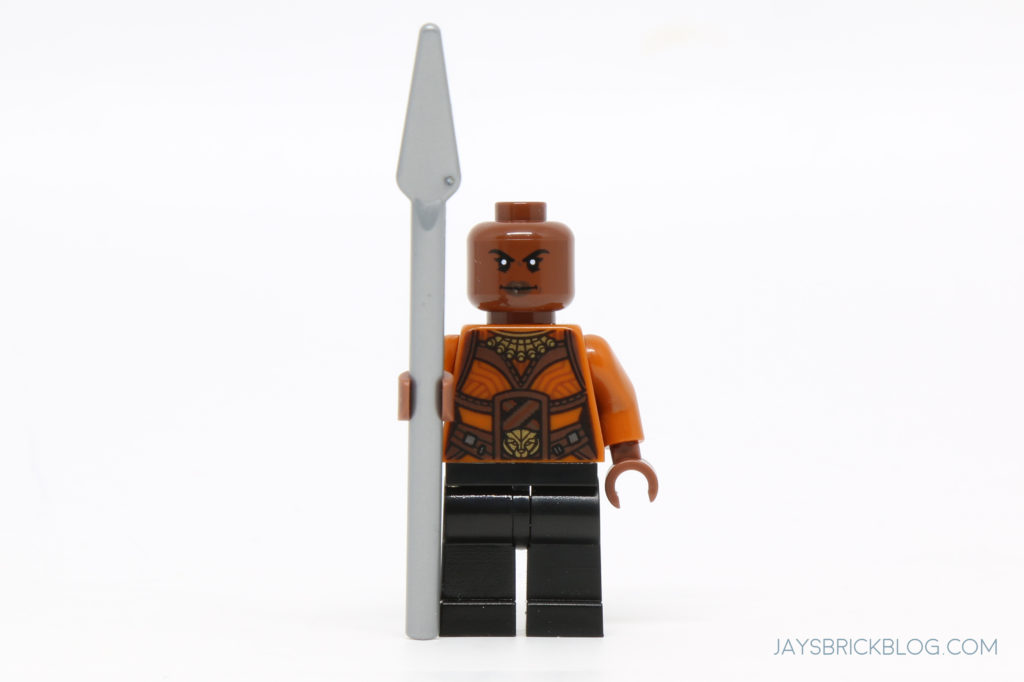 First up, we have Okoye, T’Challa’s personal bodyguard and general of the Dora Milaje, an elite force of female warriors that was one of the surprising highlights of the movie. Okoye was all sorts of bad-ass in the movie, and her presence commanded the screen in every scene she was in.

The minifigure however, is fairly disappointing. She has her trademark silver vibranium spear, but the design of the minifigure leaves much to be desired.

She has orange armour, with leather straps and a gold necklace, but after watching the movie, I was let down that the minifigure doesn’t quite look like her on-screen counterpart. 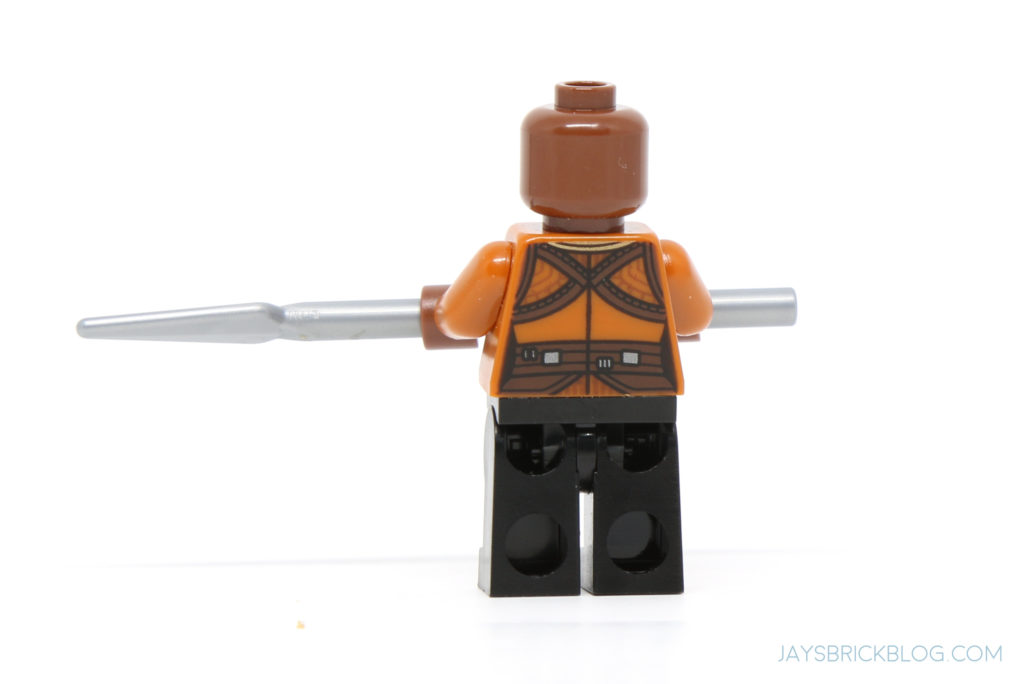 For starters, there’s not enough gold accessories, such as her bracers and shoulderpads, which feature prominently as part of her costume.

The leather flap which runs down her chest ends abruptly when it hits her (blank) legs, but the most glaring design flaw are her arms, which should’ve been red. 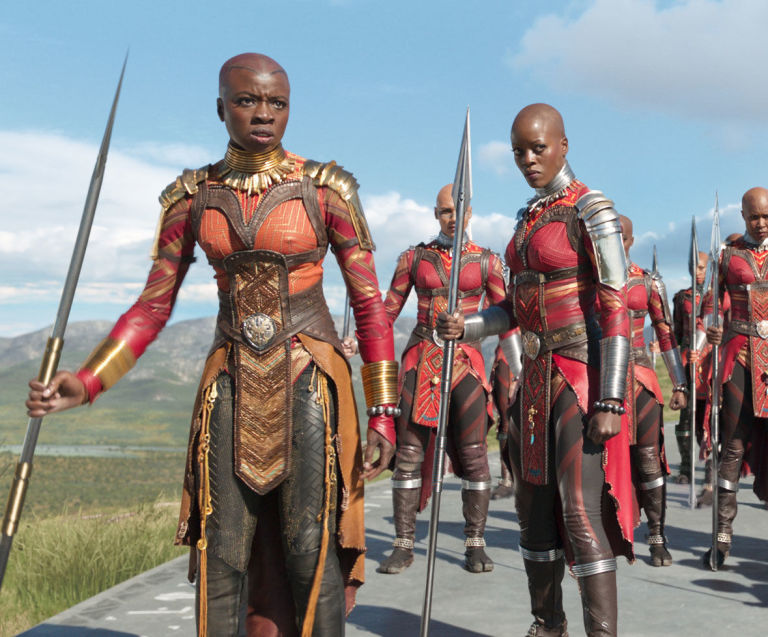 One of my favourite things about Black Panther was the mesmerising costume design, most notably with the Dora Milaje and Okoye. When compared to the on-screen version, the Okoyo minifigure just feels lazy and unfinished.

It could’ve been dramatically improved with red arms, complete with arm printing and printed legs. Nitpicking here, but I’d also have loved some print on her face/head.

I didn’t expect to be so disappointed by the Okoye minifigure, but that just illustrates how great her character was in the movie. 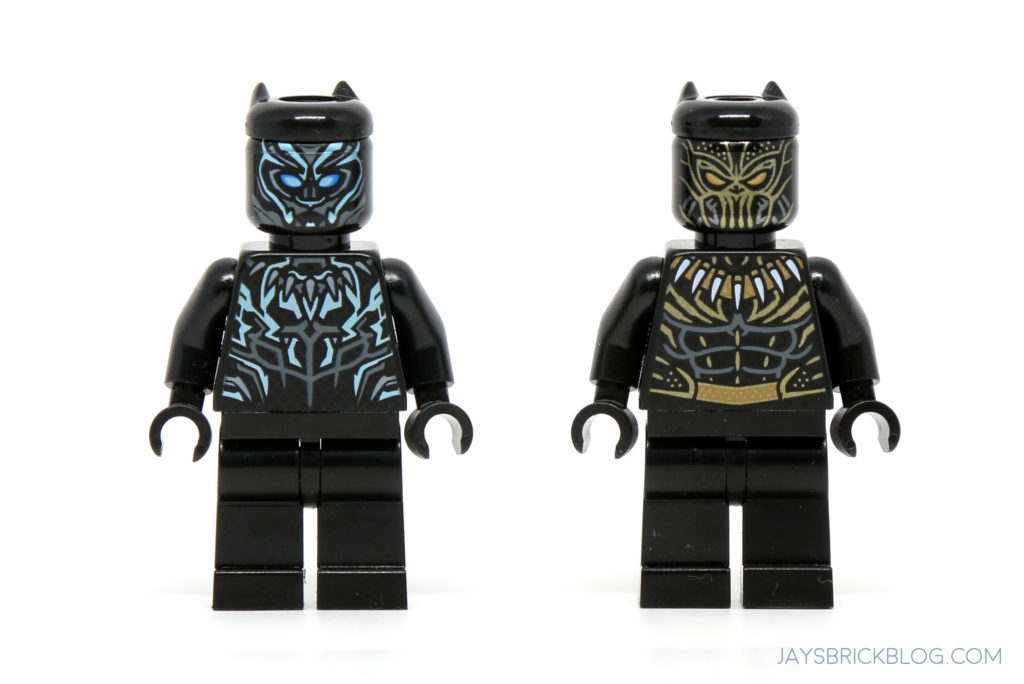 On to the protagonist and antagonist of the movie, we have T’Challa, the Black Panther and his adversary and usurper of the Wakandan throne, Killmonger. Both are decked out in Black Panther suits, with some slight colour differences. .

T’Challa is outfitted in his new suit, which gives off heavy Tron vibes thanks to the reflective blue highlights across his body and face. In the movie, we learn that his sister Shuri upgrades his suit to absorb (and reflect) kinetic energy – visually, it gets charged up and lights up before the energy is discharged like a sonic boom.

Killmonger, who arrives in Wakanda to seek out revenge and to challenge for the throne also has a similar suit with the same abilities, but his has a gold colour scheme which looks wicked regal.

Both minifigures look great, with plenty of sharp prints across their faces and torsos. 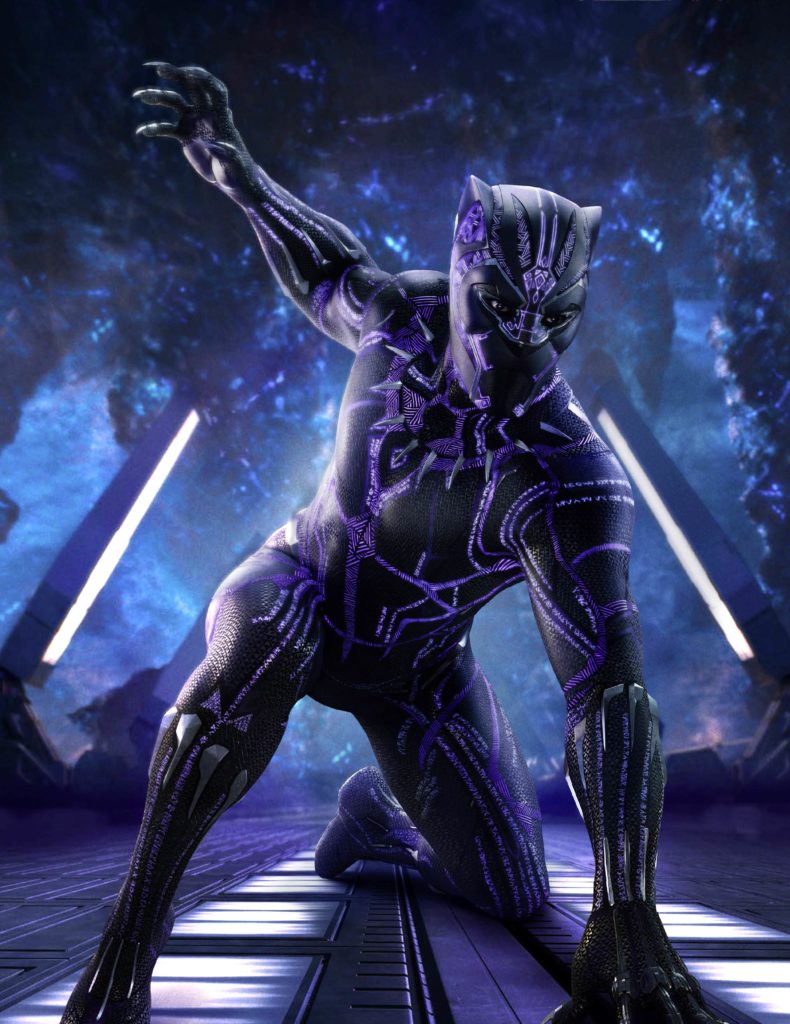 Like Okoye, I was equally disappointed with the Black Panther minifigure after watching the movie as his suit glows purple, and not blue!

I’m not sure if LEGO were supplied really old concept art prior to production, but this seems like a MASSIVE oversight by both LEGO and Marvel. 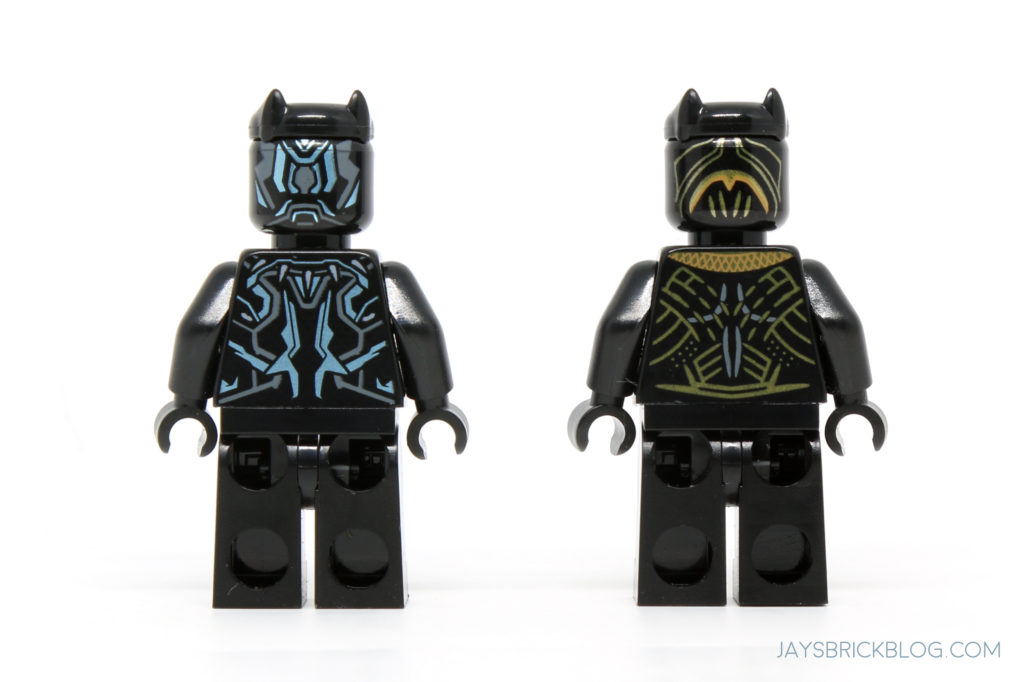 Don’t get me wrong, the suit with reflective blue highlights look dope, but it’s just not the purple that was such a prominent visual cue in the movie. 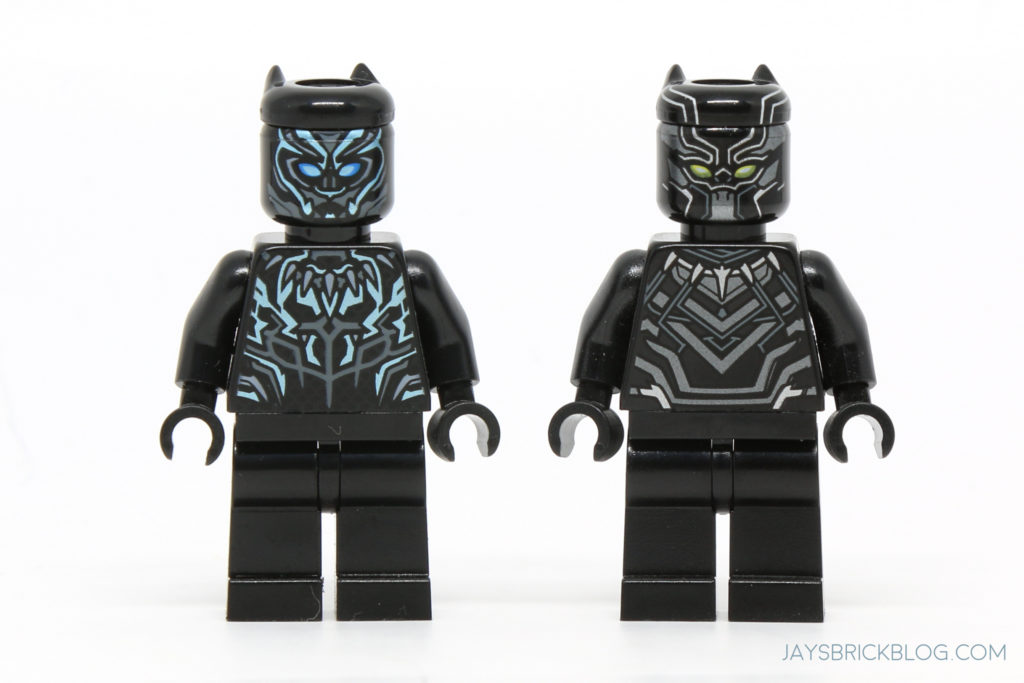 Like Okoye, it also felt like the designers were lazy with this version of Black Panther. If you compare 2018’s version to the debut minifigure from 2016, you’ll notice that the headpiece with ears doesn’t even have printing, making it look a bit more like a hat than a seamless part of the mask.

Not having arm and leg printing in this run is also a massive wasted opportunity. I don’t know, but having his own movie more than makes the case for a Black Panther minifigure done right.

The fact that a 2018 minifigure comes across as being less detailed than a 2016 one just reeks of corners being cut. The lack of purple highlights also doesn’t exactly help things. 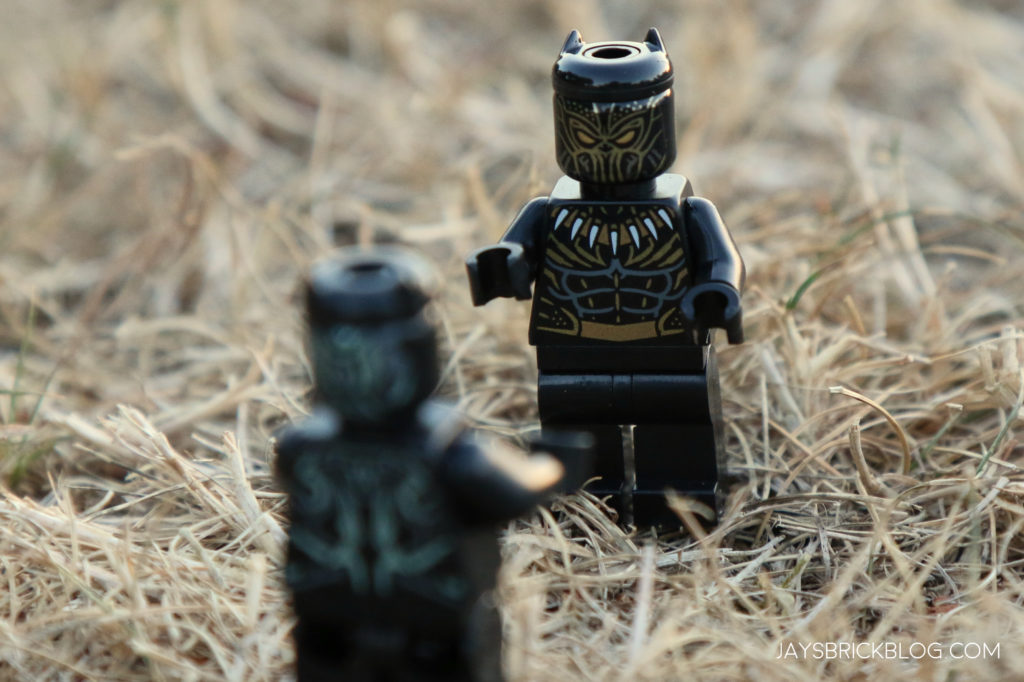 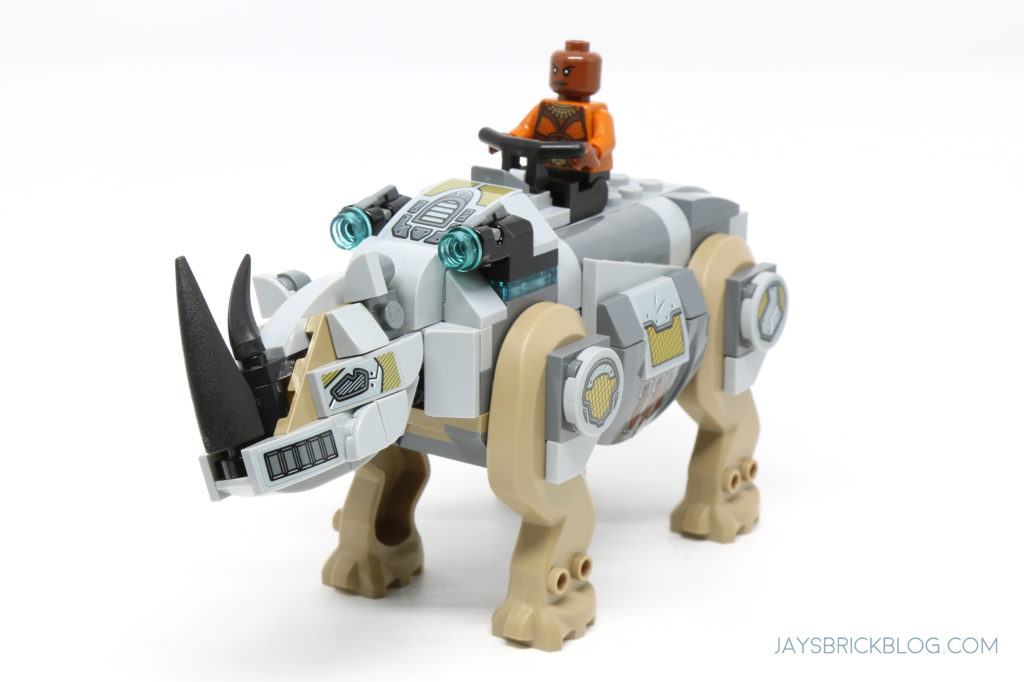 The main build of the set is the Vibranium armoured Rhino, which were pretty bad-ass in the movie. These hulking beasts with vibranium armour plating participated in the climactic final battle and it was great seeing the Rhinos pummel and bulldoze everything in their path.

The LEGO build is fairly faithful and captures the shape of the Rhino well, which is a big achievement as it’s almost entirely brick-built except for the legs.

Sporting grey and dark grey plates with stickers, the Rhino really does look chunky and intimidating. 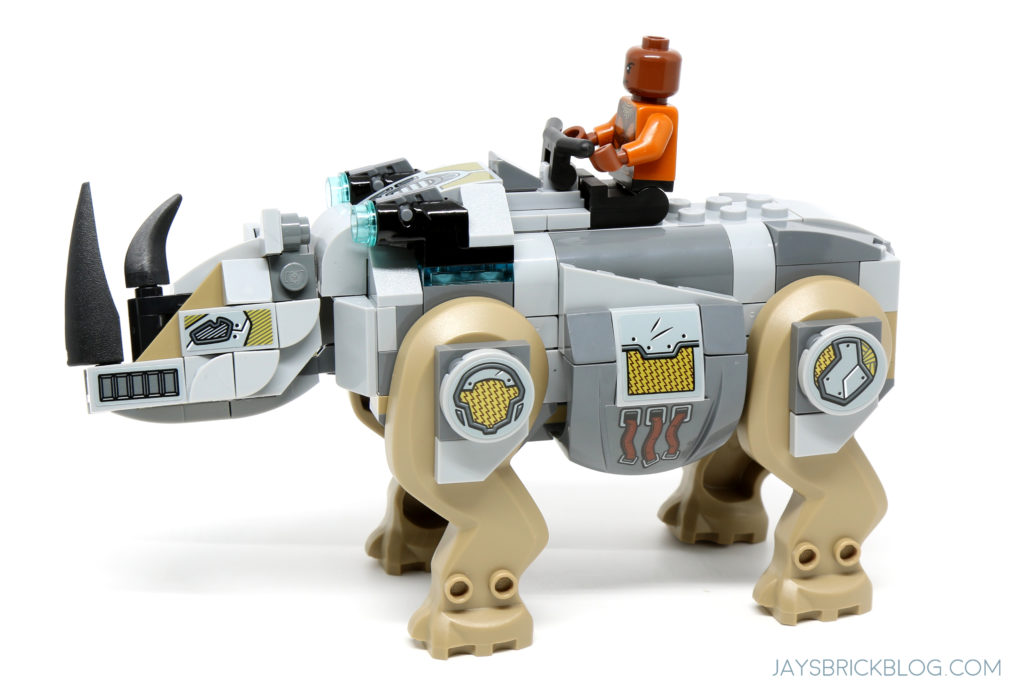 Here’s a look at the Rhino from the side. For once, the stickers actually don’t look too bad and fit the overall design well.

There’s a seat on the Rhino’s back with handlebars for the minifigure to grab ahold of. Oh and what’s with the stud shooters? Those were definitely not in the movie at all, and just look bizarre on the Rhino.

LEGO, you do not need to shoe-horn stud-shooters into every set. Please, stop. 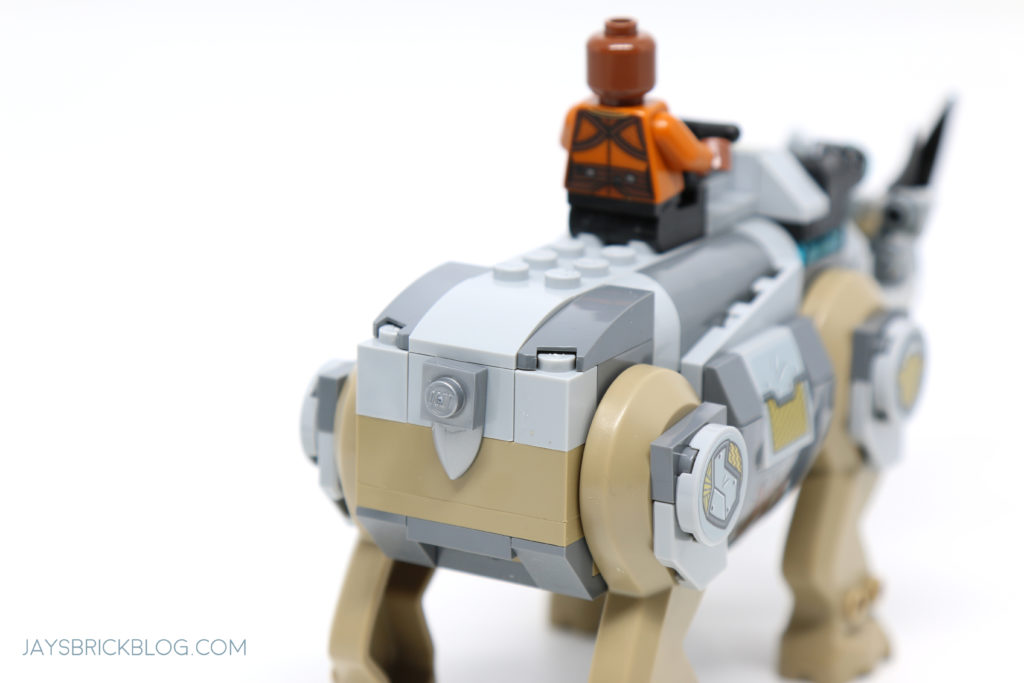 From behind, you can see that the Rhino has a cute little vibranium tail-guard. 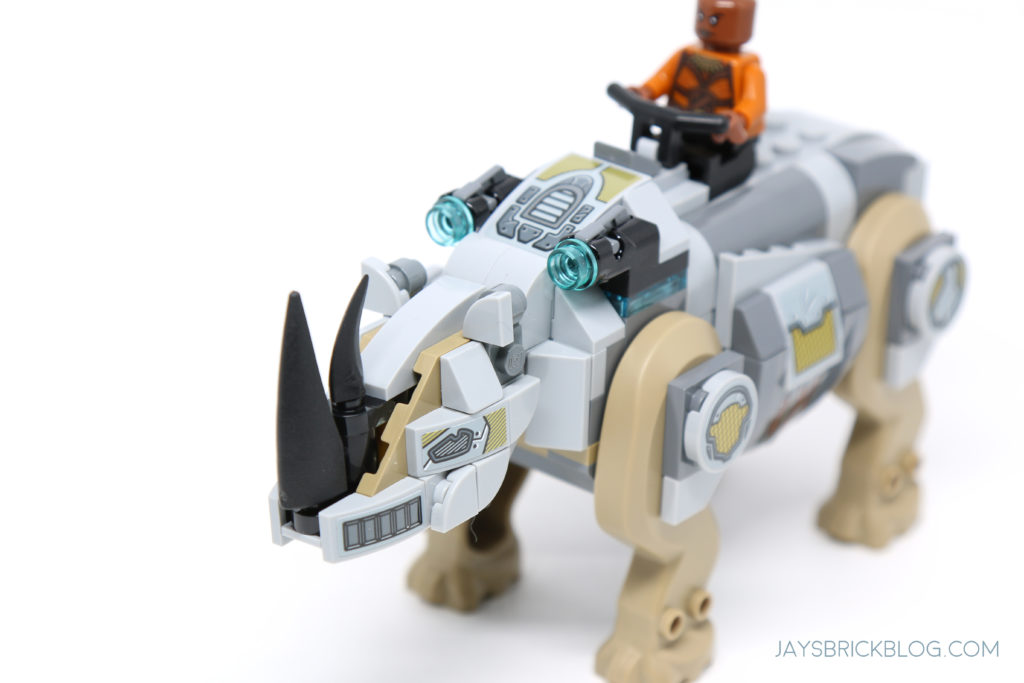 The head is highly detailed and is masterfully designed. Building the rhino was also interesting with some pretty cool techniques thrown in for good measure, although the build got a little repetitive halfway. 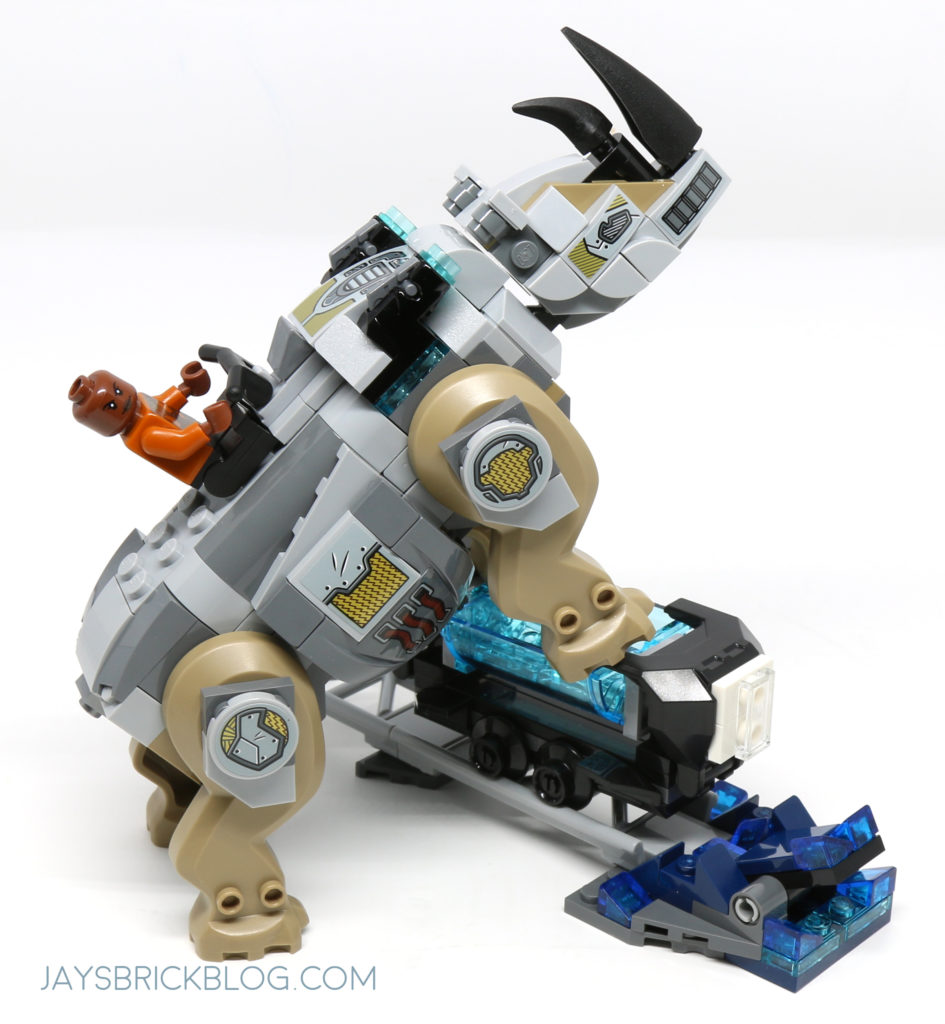 The Rhinos legs are fully articulated, which allows you to pose him in a variety of positions. 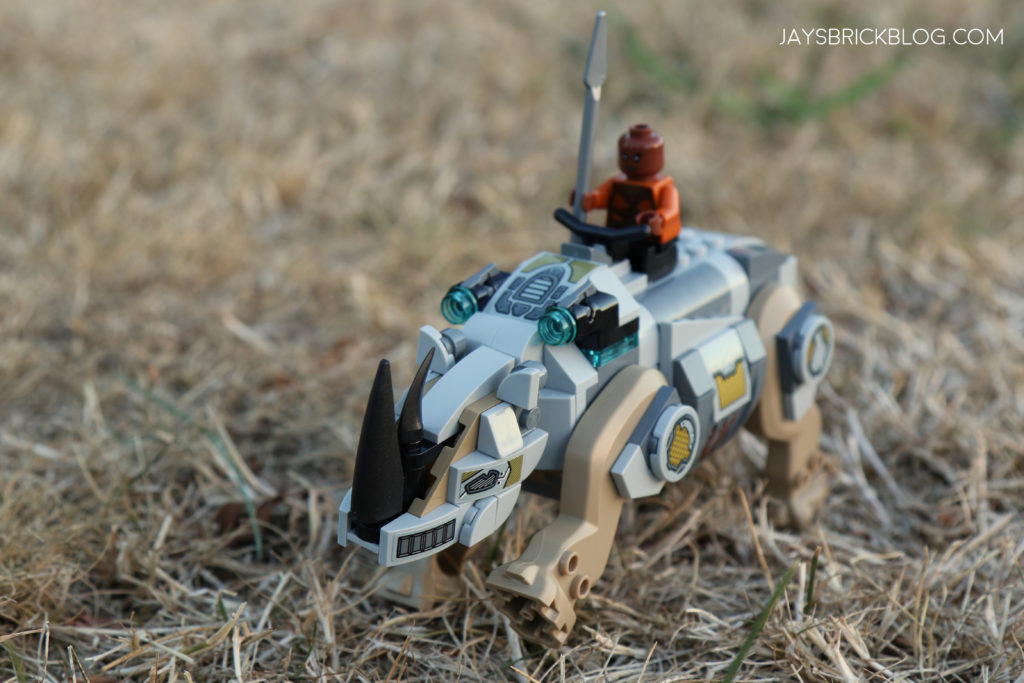 Here’s a photo of the Rhino charging down the field. 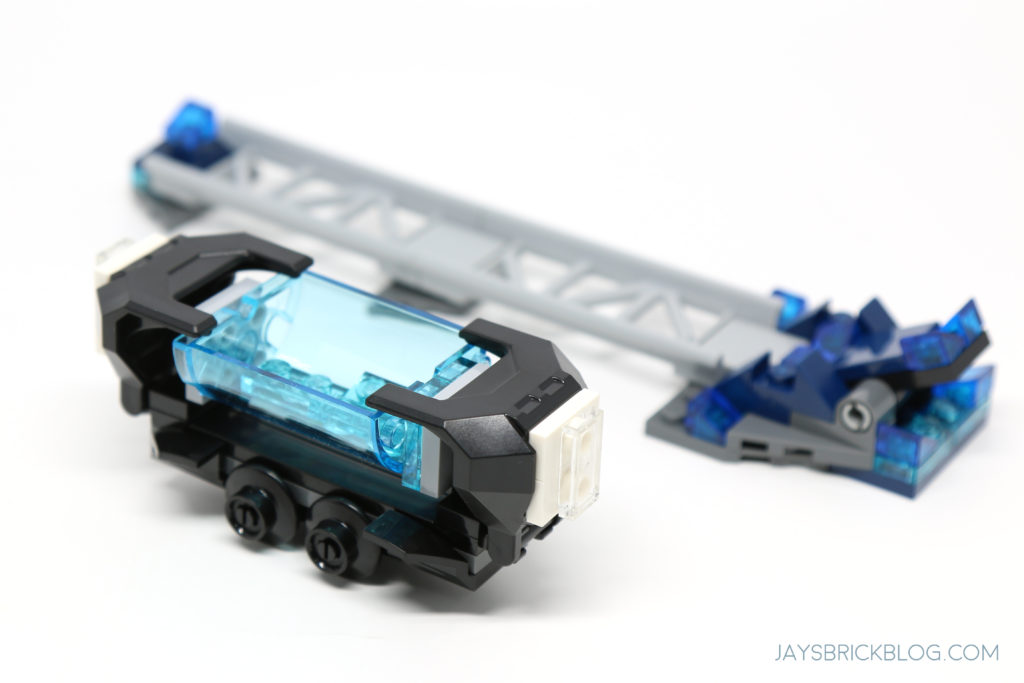 Last but not least is a small section of the mine, which includes a track, and a small futuristic mining cart. 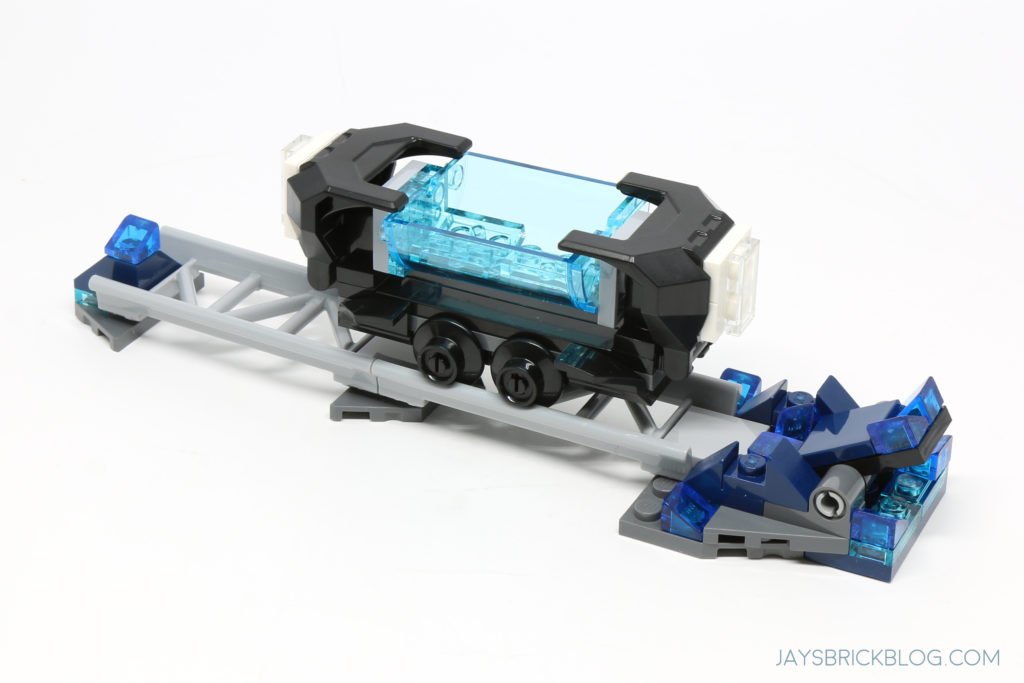 The mining cart travels on the track fairly well, but it’s not as smooth and frictionless as I’d like. As you approach the right end, you can tip down the lever, to throw the mining cart off-balance and send it tumbling. It’s not the most exciting play feature.

I do like the mix of transparent and dark blue elements, which represent vibranium nodes. The mining cart also contains 3x trans-blue 2×1 plates which are meant to be mined vibranium. 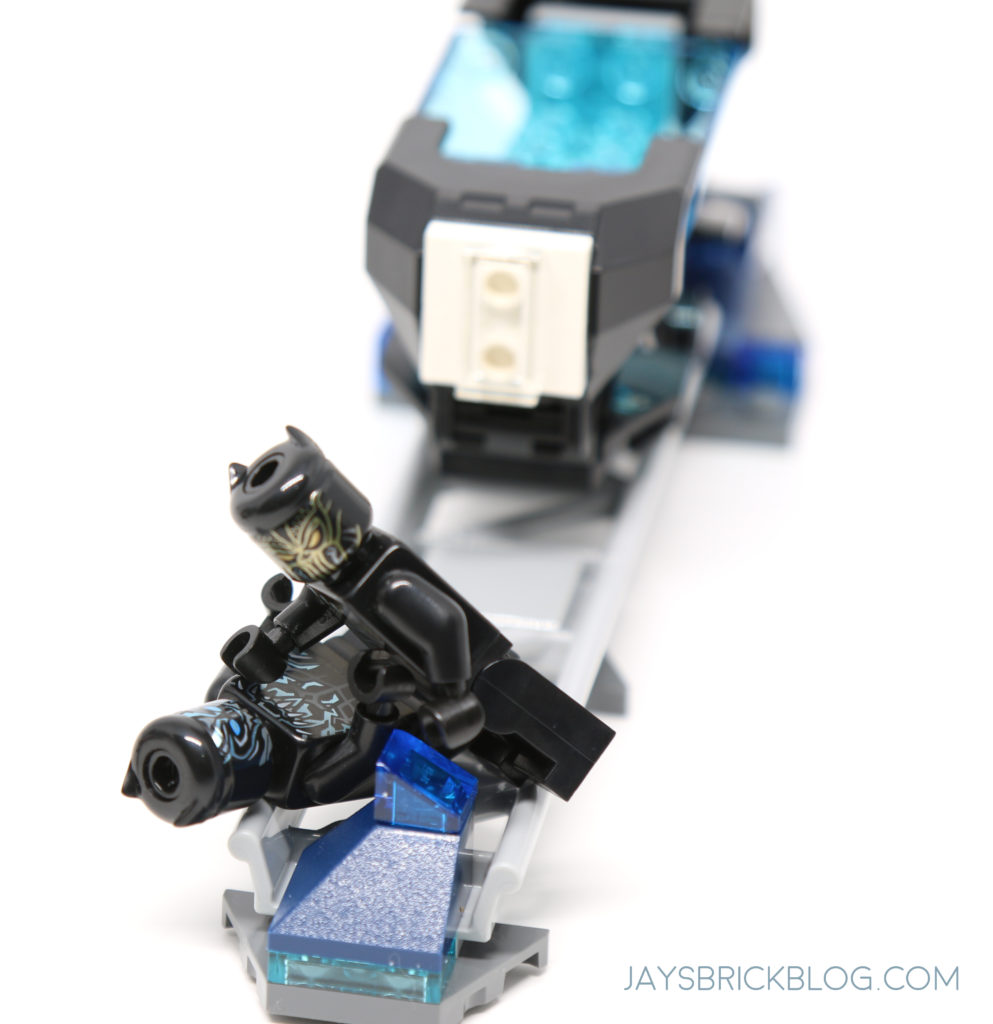 While it may not be the most ground-breaking model, the scene is a fairly accurate representation of the mines in the movie, where the final battle between T’Challa and Killmonger takes place – I really appreciate it when I can closely re-enact scenes from the movie in LEGO form. 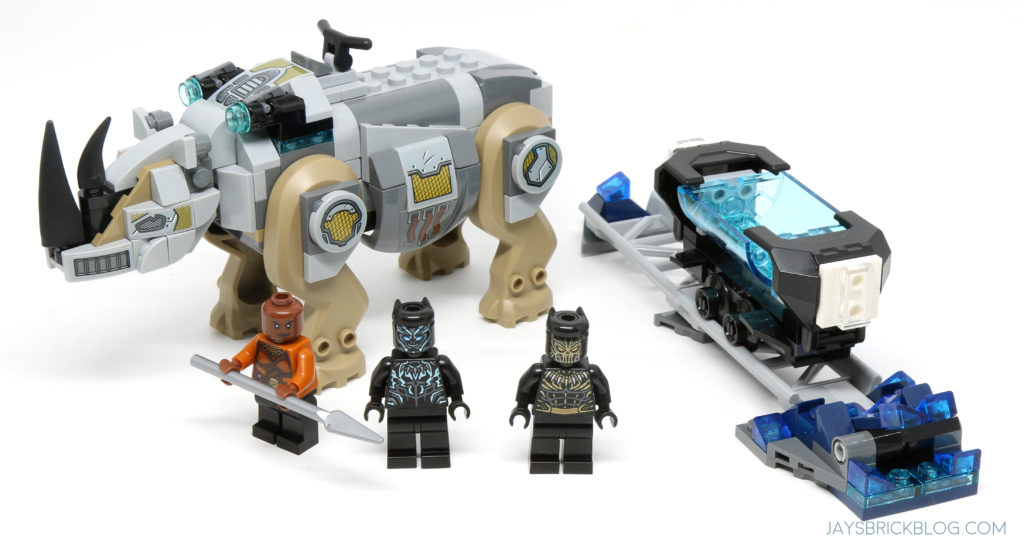 Final thoughts: I really didn’t enjoy this set, and expected a bit more from an AU$39.99/US$19.99 set that’s meant to be a tie-in with one of the biggest movies this year.

The builds are fairly average and there’s nothing really outstanding here. The Rhino is decent, but it’s not the kind of model that makes you rush out to the shops to get it and the mine portion is limited at best.

Which brings us to the minifigures, which feel extremely lazy. They don’t feel like contemporary minifigures due to the sore lack of arm and leg prints, but the nail in the coffin is all the small details that visually set them apart from their on-screen counterparts. And not in a good way.

For a licensed LEGO set, that’s a huge, huge misstep and I can’t help but feel disappointed with this entire set.

This is a set that’s definitely aimed at younger builders, who will appreciate all the small little play features and the posable Rhino, which is plenty of fun, but for adult LEGO fans, it leaves a lot more to be desired.

Apart from the Rhino, it has almost zero display value and in scenarios like these, you can usually rely on the minifigures to make up for the models, but Okoye and Black Panther are a let-down for fans who yearn for movie-accurate minifigures and LEGO sets.

I can tolerate small differences, but a huge dealbreaker for me is when minifigures lack some of the major visual and design cues that make the on-screen versions stand out.

The costume design and art department did such an amazing job on Black Panther, and it’s just sad that they didn’t translate the aesthetics well enough to the LEGO minifigs.

I cannot recommend this set at all, unless you’re a massive hardcore LEGO Marvel fan, and even then you’re probably better off waiting for a massive discount or buying the minifigs off Bricklink.

Thanks once again for reading this review! I’ll hope to get to the larger set, Royal Talon Fighter Attack soon, but I’m waiting on a good sale before I pick it up.
I hope you enjoyed the review and if you want to read more LEGO reviews, check out the the Review Hub where you’ll find links to other Marvel Super Heroes and other reviews. 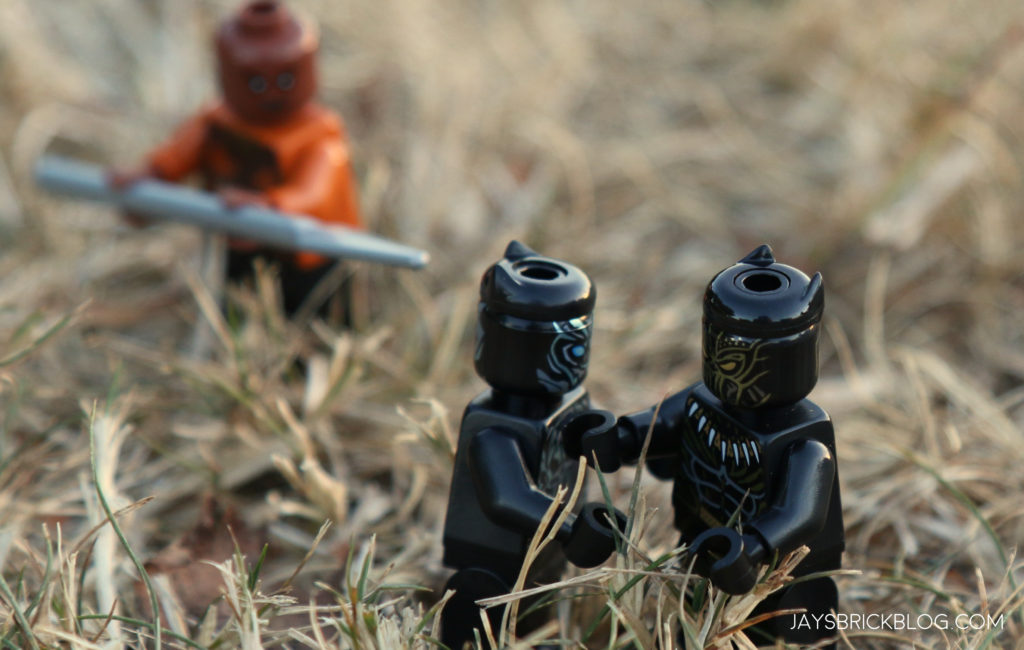 Let me know in the comments what you thought of this set, and if you’ve watched Black Panther in the cinema, how the set stacks up now that you’ve seen the entire movie!

If you liked this review, be sure to subscribe with your email to receive notifications of new posts or you could always like the Jay’s Brick Blog Facebook page for updates and additional content that don’t make it onto the blog.