The end of the year (and decade!) is approaching, and what better way to close the curtain on 2019 than with a review of one of the most anticipated new sets of 2020 – 80104 Lion Dance.

The two new sets have gone on sale in Asia Pacific, before a wider global release on 10 January 2020 – I was lucky enough to pick up the Lion Dance set, so I didn’t waste any time to put it together for a review!

Note: I’m actually on holiday right now, and I don’t have access to my home studio and setup, so please forgive me if the photos aren’t up to my usual standard. I tried my best to replicate it as best as possible, but they aren’t really the best!

Without further ado, let’s jump into my final review of the decade – 80104 Lion Dance! 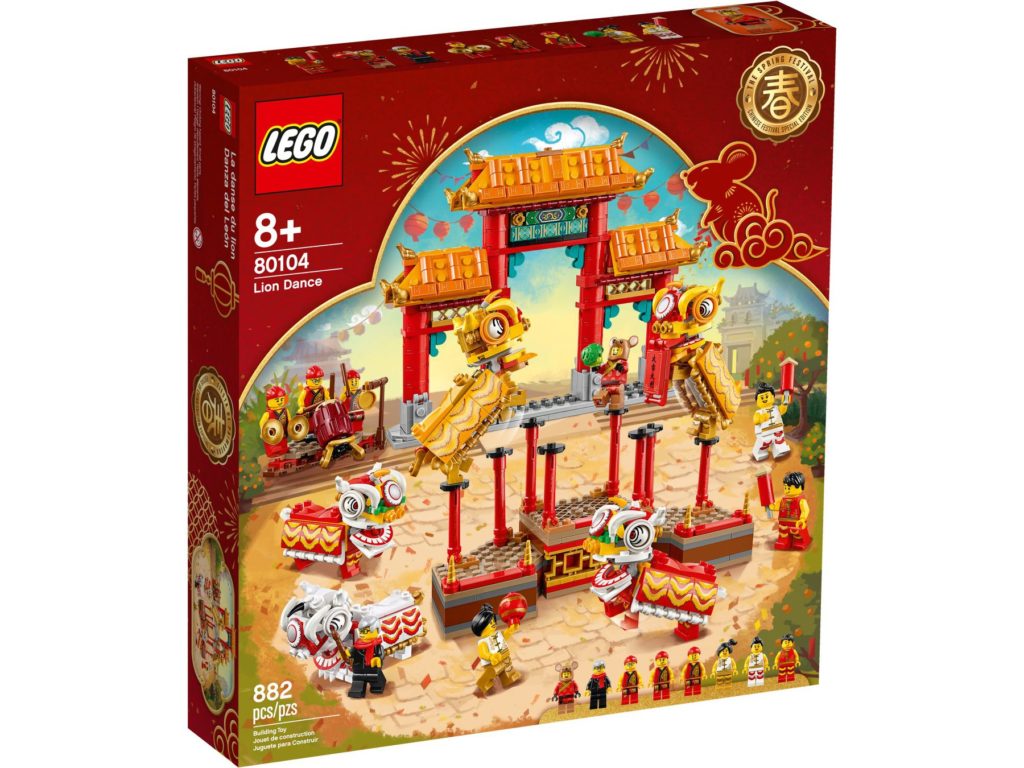 80104 Lion Dance celebrates what should be a very familiar element of Chinese culture – the Lion Dance, which is traditionally performed during Chinese New Year, or other festive occasions such as weddings or business openings to usher in good fortune and prosperity.

Two dancers are dressed up in a costume that mimics a mystical Chinese Lion, and perform acrobatic feats such as jumping on stilts, or standing on each other’s shoulders, mimicking the movement of Lions, and are accompanied by loud drums, cymbals and gongs.

If you’re unfamiliar, watch this video to see a Lion Dance in action!

There’s a “Spring Festival” Chinese Festival Special Edition badge located in the top right corner of the box, as well as an illustration of a Rat (it’s the Chinese Zodiac Year of the Rat in 2020), and I love the bright and vibrant way the set is presented.

Opening the box, I was most surprised to discover absolutely ZERO stickers! This made me so incredibly happy, especially for a set which contains so many detailed elements.

The Lion Dance set screams incredible value, with eight minifigures included. You get a three-piece band, an official-looking mayor, three supporting Lion Dancers and a special Rat Suit minifigure to commemorate the year of the rat.

The lion dancers, and musicians have all-new highly detailed printed torsos and legs, and I especially like the frills on the dancers’ legs which accurately mimic a Lion Dancer’s costume. 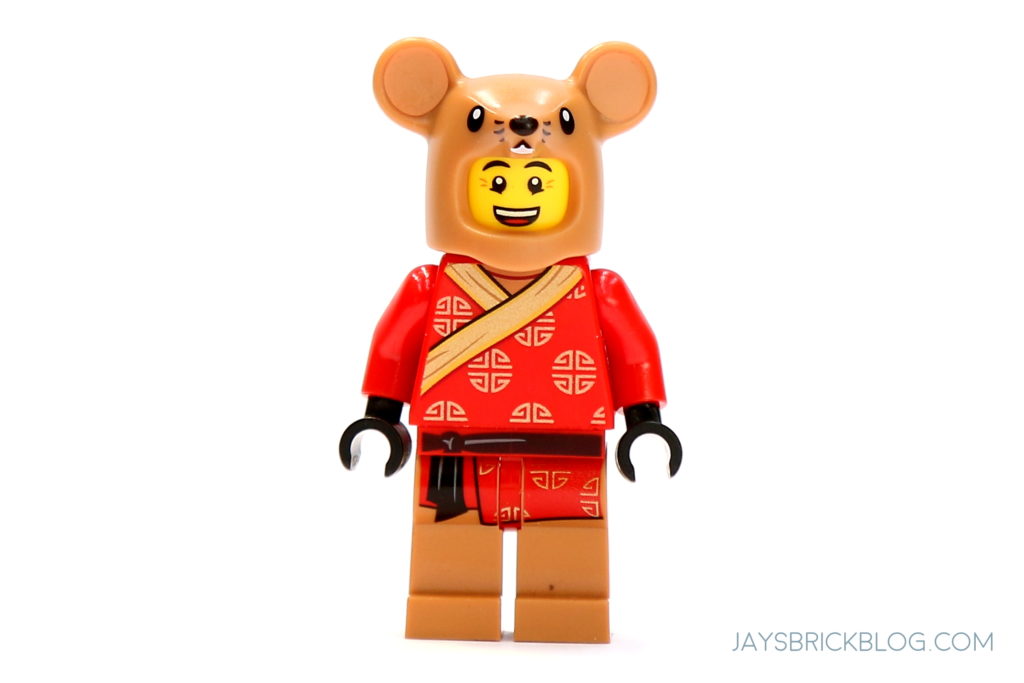 The highlight of the set is undoubtedly the Rat Suit Guy minifigure. He has an open-face Rat headgear, in the same vein as every other Animal Suit Costume Minifigure, and is dressed in a festive Chinese robe, with a black sash. 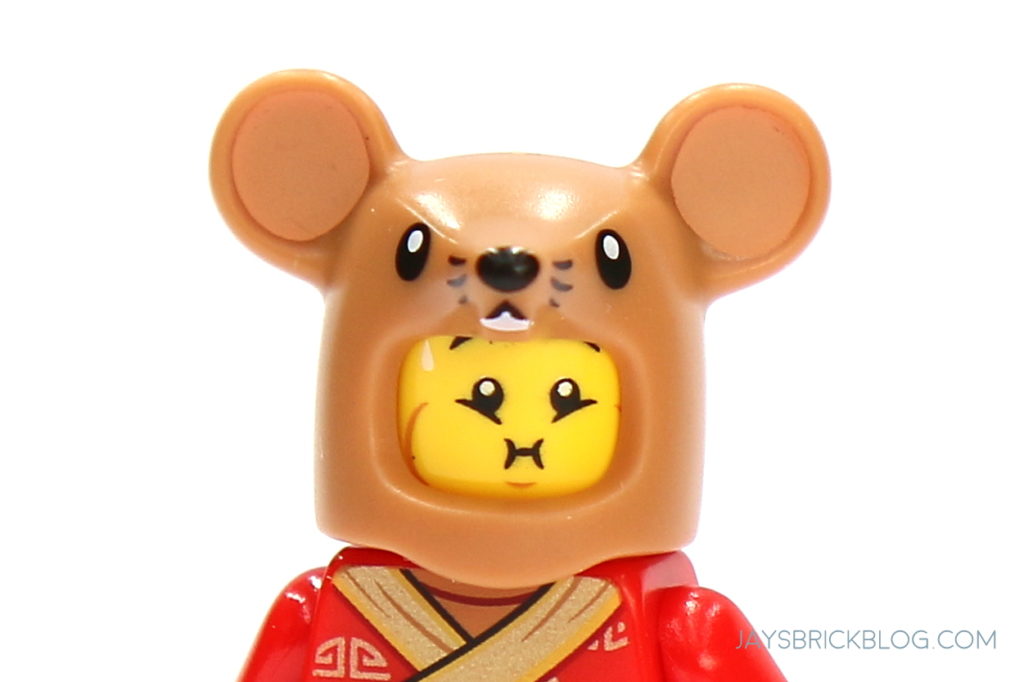 I really love the Rat Mask, and it makes for a really fitting inclusion to celebrate the Year of the Rat.

The minifigure also has an alternate face, which looks like he’s on the verge of throwing up. 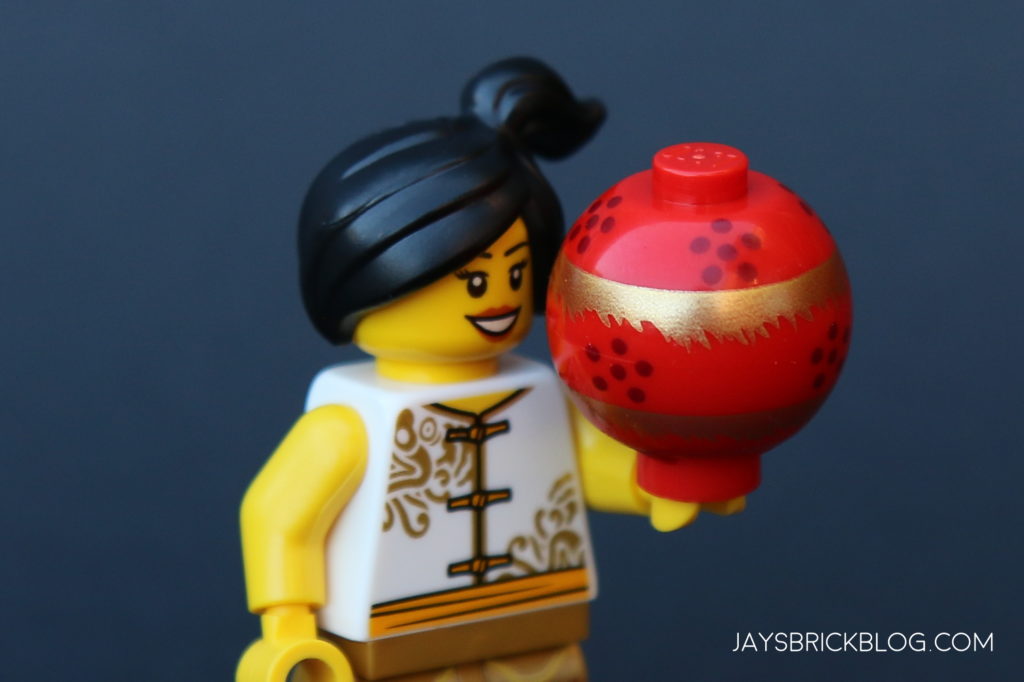 In addition to accessories such as fireworks and a paintbrush, the most interesting accessory introduced is this painted red ball, which serves as a prop for the Lion Dancers to chase. 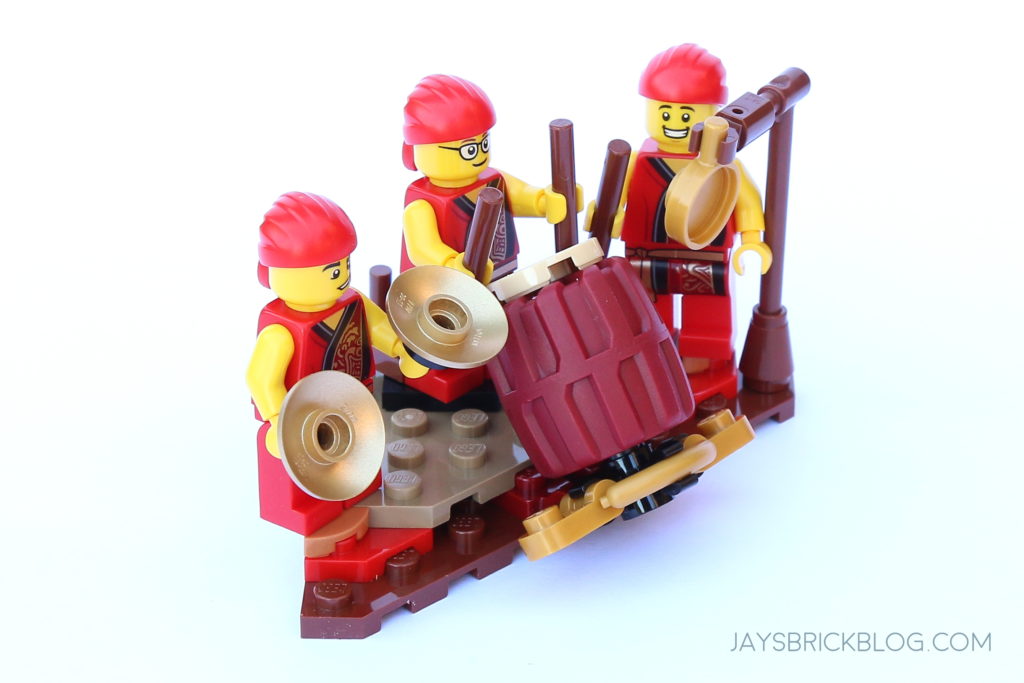 If you’ve seen a Lion Dance performance, you’ll undoubtedly remember the loud clanging of cymbals and drums accompanying the Lions.

The loud music is meant to scare away evil spirits! 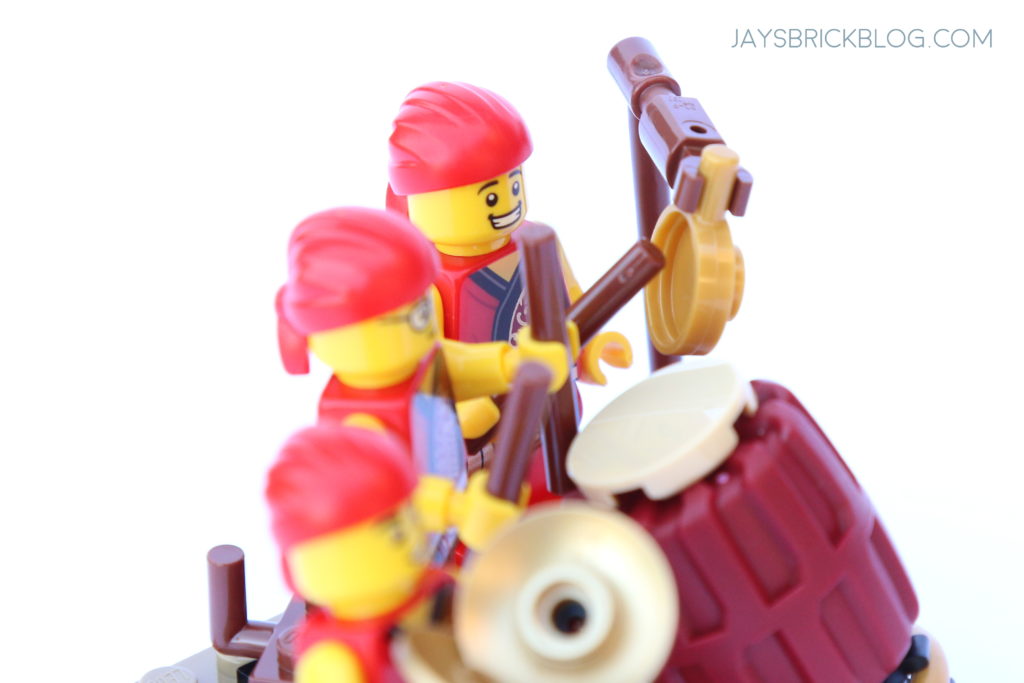 The three musicians occupy a small platform, and are equipped with a set of shiny gold cymbals, a gong, as well as a large drum. 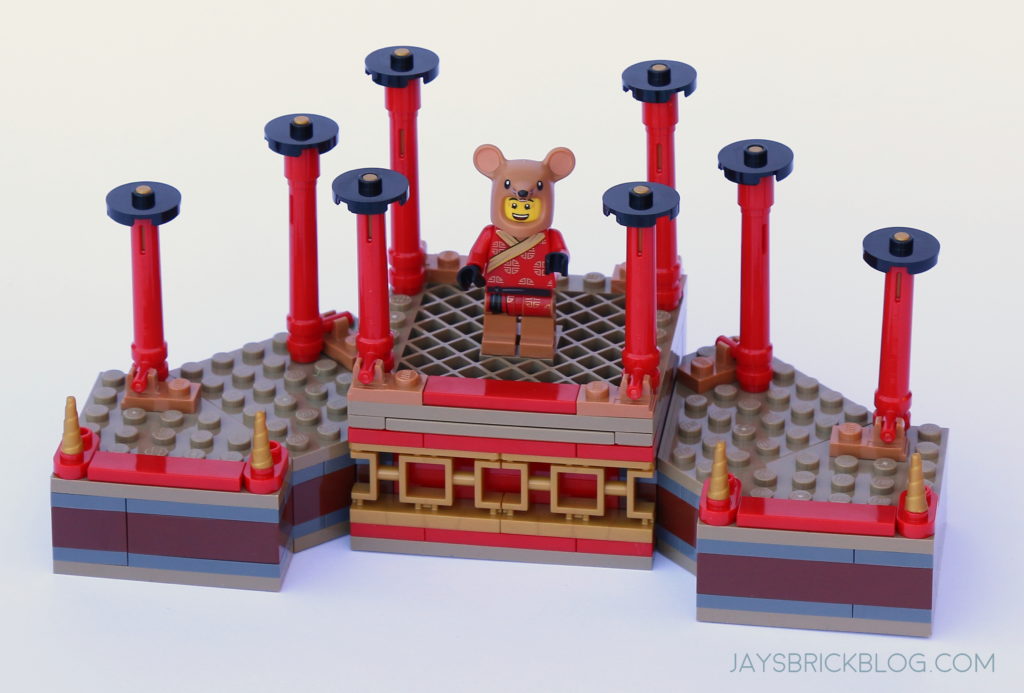 There are two structures included in the set, the first being a stage with stilts where the main performance takes place. 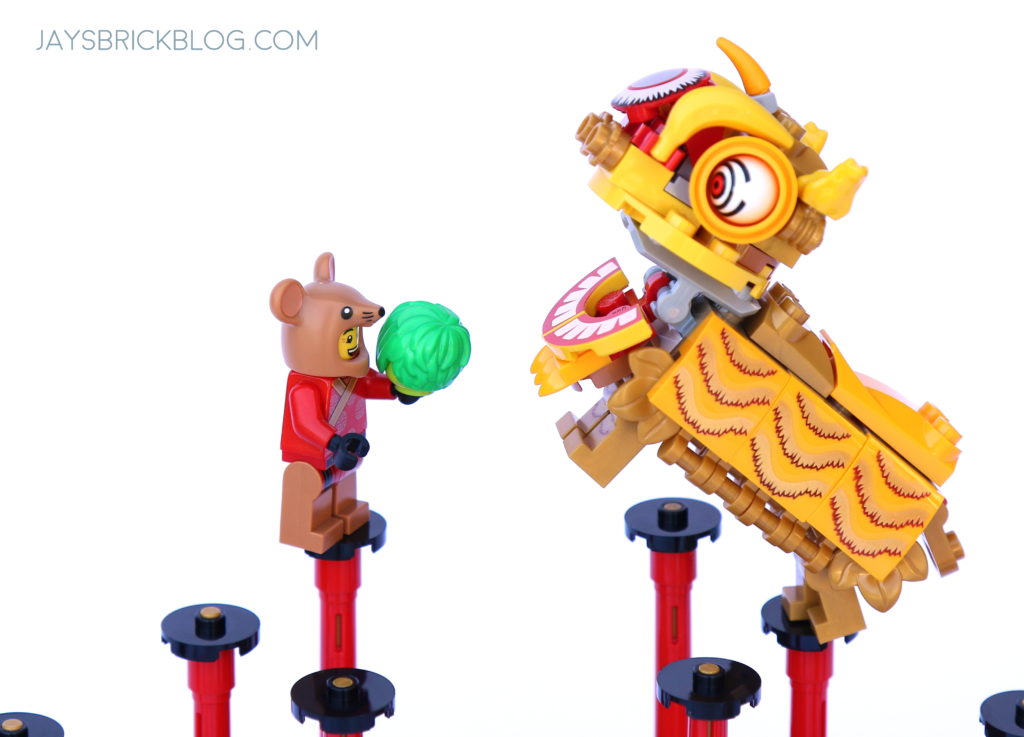 The stilts have a dish atop each pillar, which allows you to securely place the Lion’s minifigure legs on them for a variety of poses.

A really neat inclusion is a head of cabbage/lettuce, which is made out of a green hairpiece and a lime green minifigure head.

Wikipedia has a great explanation of the significance of the veggies: During the Chinese New Year, lion dance troupes will visit the houses and shops of the Asian community to perform the traditional custom of “cai qing” (採青), literally meaning “plucking the greens”, whereby the lion plucks the auspicious green lettuce either hung on a pole or placed on a table in front of the premises. The “greens” (qing) is tied together with a “red envelope” containing money and may also include auspicious fruit like oranges. In Chinese cǎi (採, pluck) also sounds like cài (菜, meaning vegetable) and cái (财, meaning fortune). The “lion” will dance and approach the “green” and “red envelope” like a curious cat, to “eat the green” and “spit” it out but keep the “red envelope” which is the reward for the lion troupe. 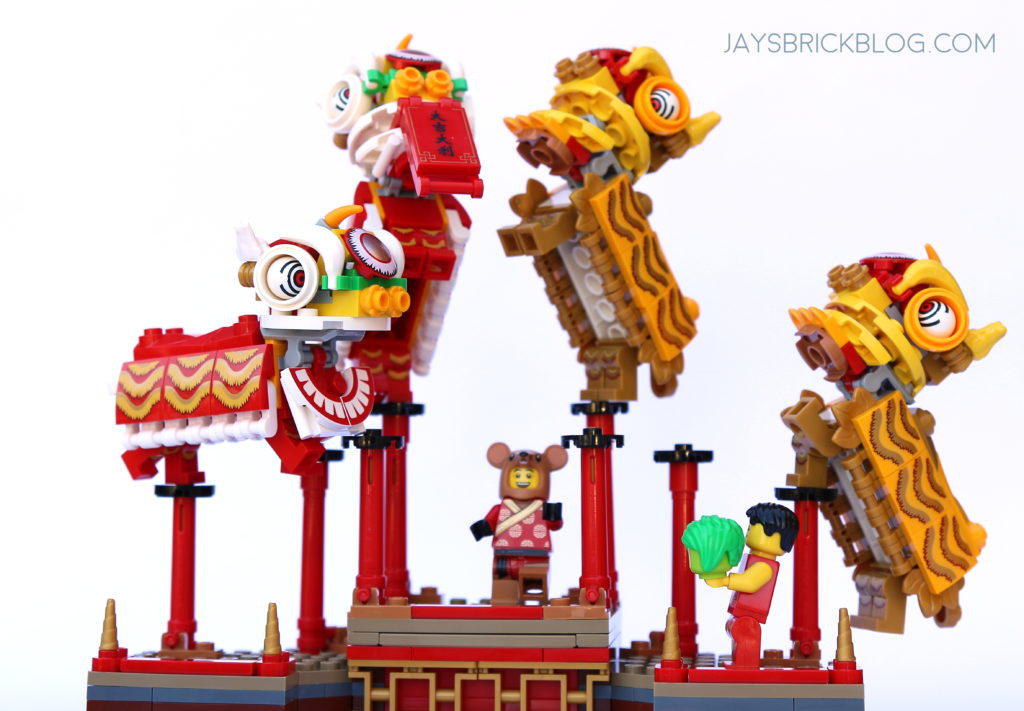 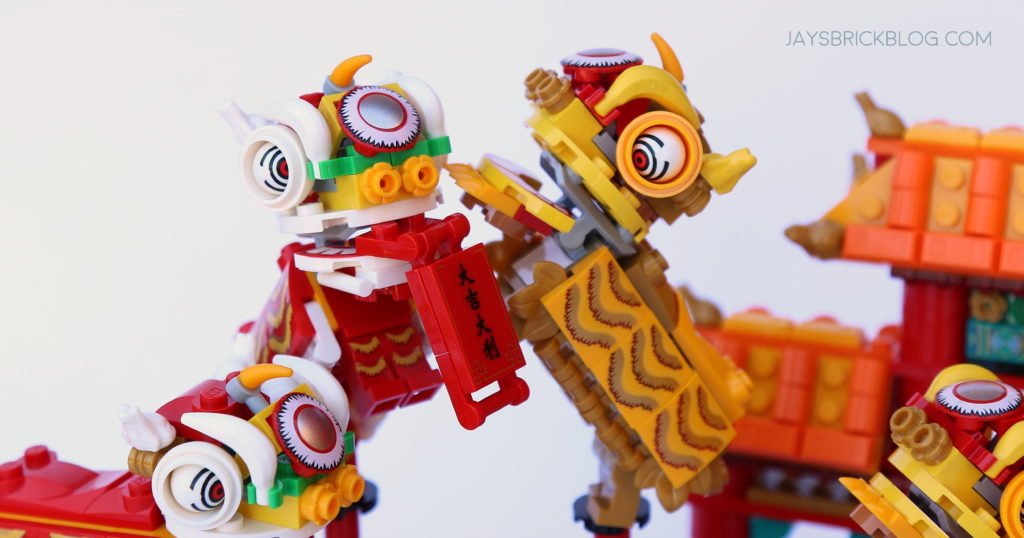 The stilts platform is quite brilliant, and you can pose the Lions in a myriad of different positions by adjusting their legs, which are fastened securely to the stilts. 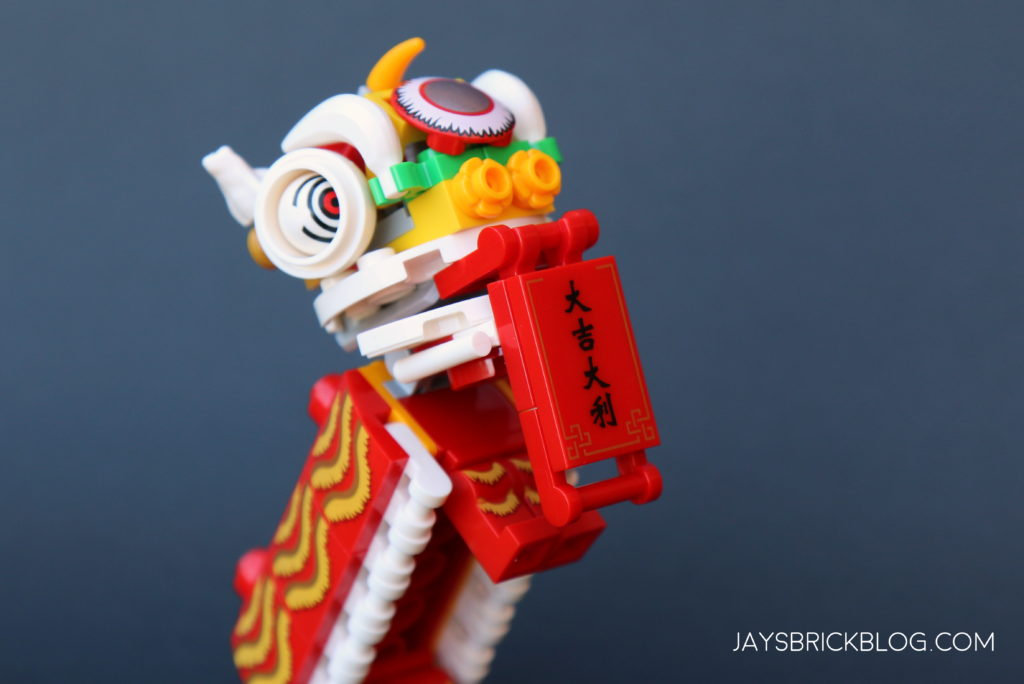 At the conclusion of a Lion Dance, after it’s “consumed” the lettuce, the climax of the performance typically involves a scroll being unfurled from the Lion’s mouth which typically contain a phrase, or idiom to bless the spectators.

A scroll is included with a printed 2 x 4 tile with the characters 大吉大利 , pronounced dà jí dà lì. It loosely translates to an idiom meaning great luck, great profit; everything is thriving. 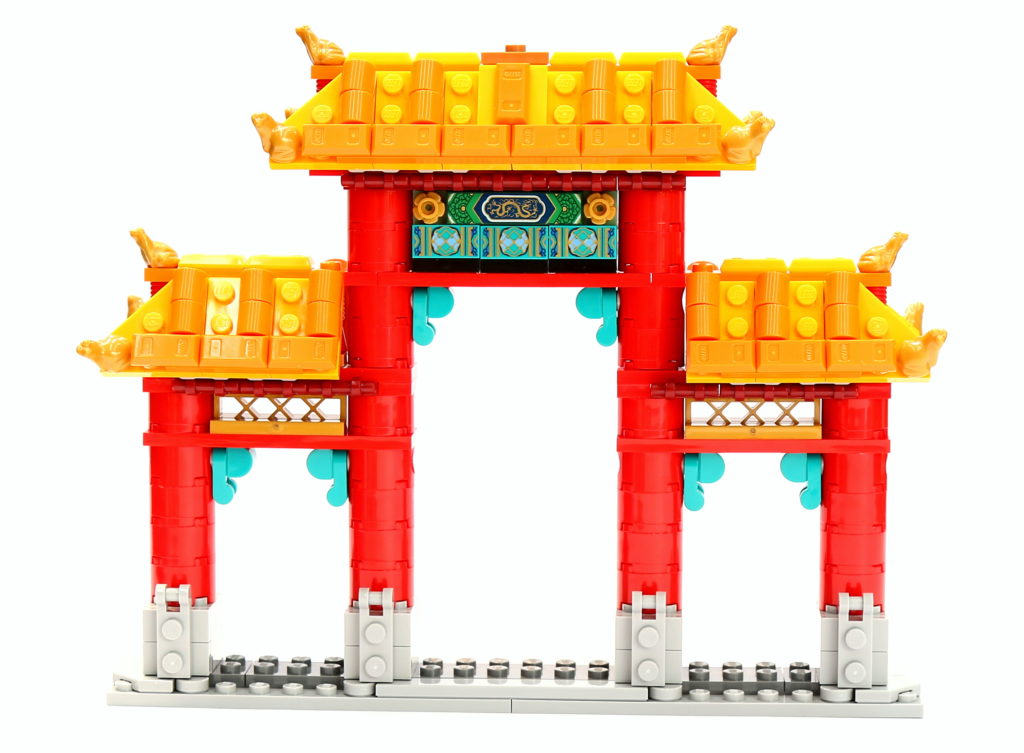 Also included is an archway featuring traditional Chinese architectural designs. The simple design contains some really cool details, and I especially like how prominent the red pillars are, as well as the vibrant yellow and orange sloping roof. 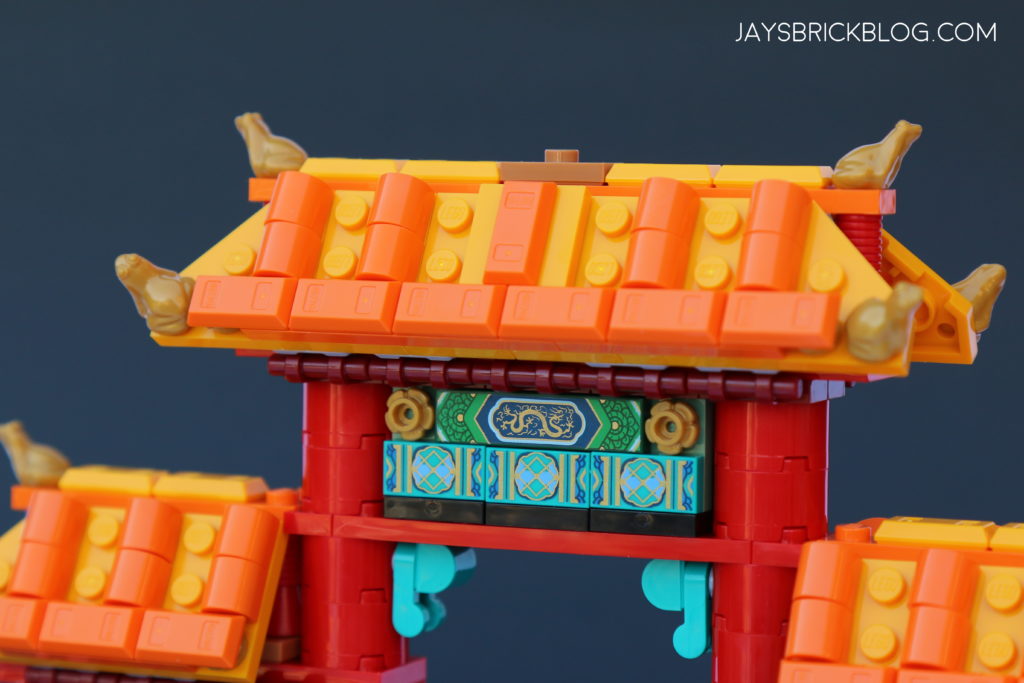 Here’s a closer look at the roofs, which feature orange “gold bullions” which I believe have never been made in this colour until now. I love the pearl gold frogs at the edges of the roofs – it’s quite common to have creatures and elements adorning the roofs of Chinese temples.

One of the most impressive features of this arch, if not the set, is the ornate plaque beneath the main section.

There’s an oriental gold dragon printed in the middle of two jade flowers, atop more symmetrical jade patterns. These are ALL printed elements, and they just look incredible, and give the archway so much more cultural flavour.

We get two sets as well, as the back of the arch also includes the same plaque.

Of course, the highlight of the set are the five Lions themselves. We get three variations, a solo white lion, two yellow and red ones to form quite an ensemble. 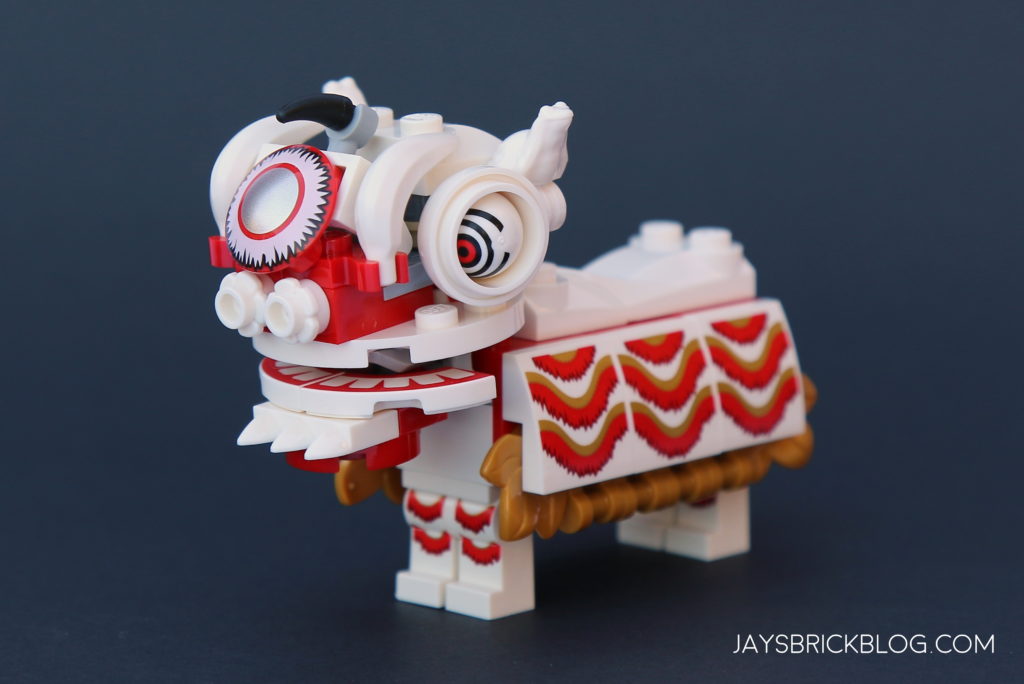 Every now and then, when piecing together a LEGO model, I go wow, I cannot believe that a seemingly random assortment of LEGO elements could come together to form a beautiful model, and I felt that five times upon completing each lion.

The designers that worked on the design of the Lions deserve some sort of award, and this is one of the most incredible models I’ve ever built. The Lion heads are so intricately designed, and capture the shape and look of real Lion costumes so damn well. I loved the use of interesting parts such as frogs and bananas to get the look right.

You can tilt the heads up and down, as well as open and close their mouths, to make them really interactive.

Oh, and how cool are the white bananas! 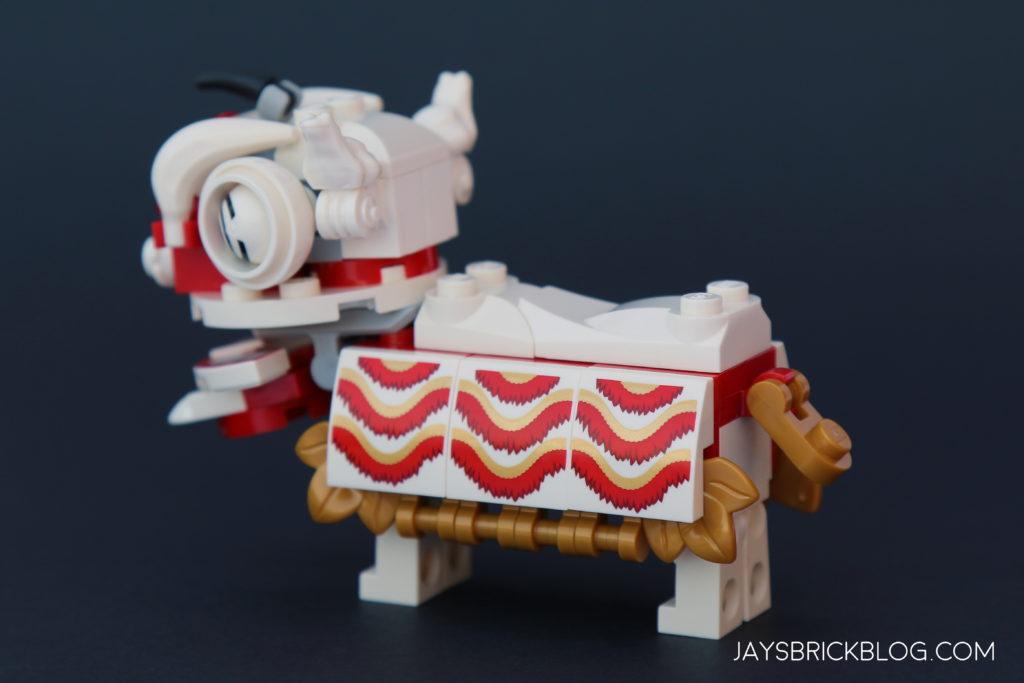 You can also see that each Lion has a pair of minifigure legs attached to the bottom. Unfortunately, there isn’t a complete minifigure hiding underneath the costume, as that would’ve probably been too technically challenging, but it doesn’t detract from the design at all.

The silver shield on the Lion’s faces, eyes, bottom jaw, and the curved slopes on the sides are all brand new printed elements, which are brilliant.

The fact that these elements are printed just makes this feel so much more premium, and I really love that they made the call to not opt for stickers. 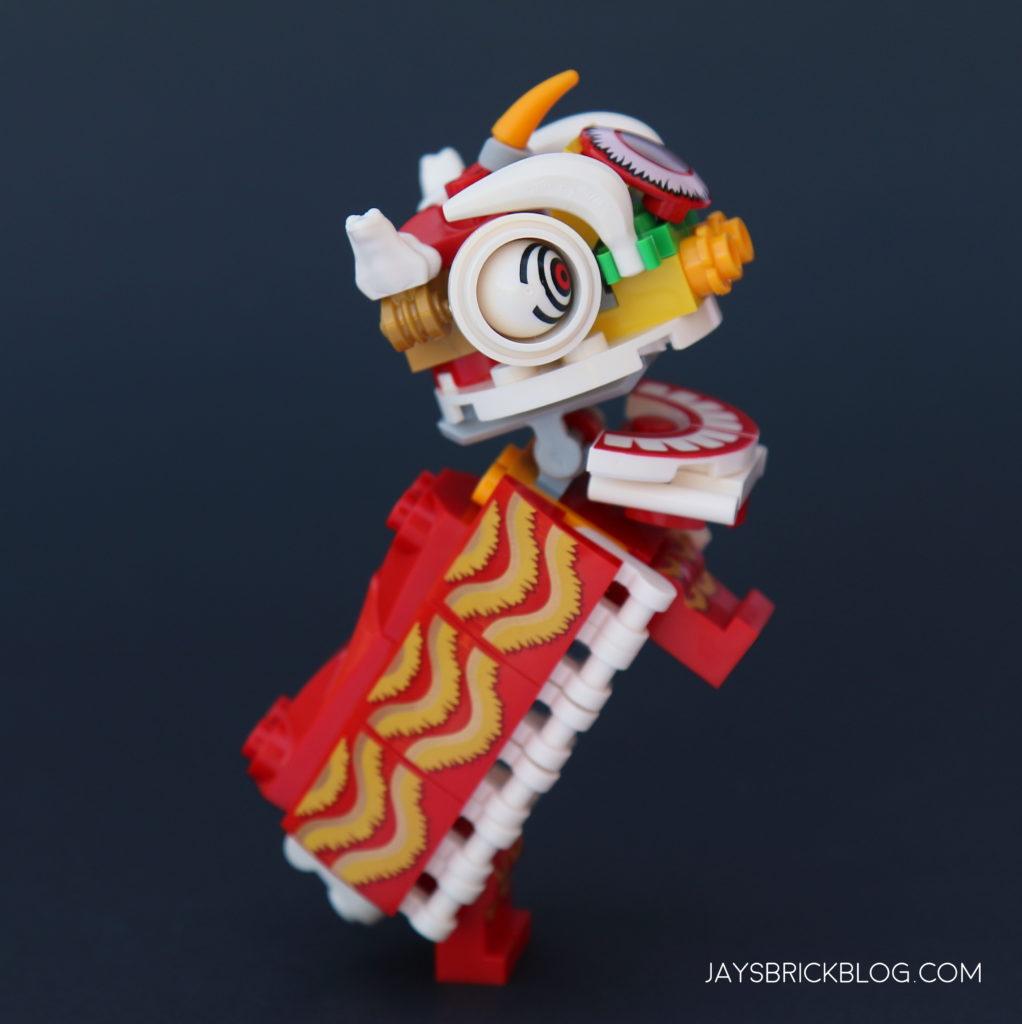 The minifigure legs attached to the Lions also allow them to strike a bunch of different poses, such as the common “rearing on its hind legs” pose that Lion dancers often strike to make the Lions loom large to the audience. 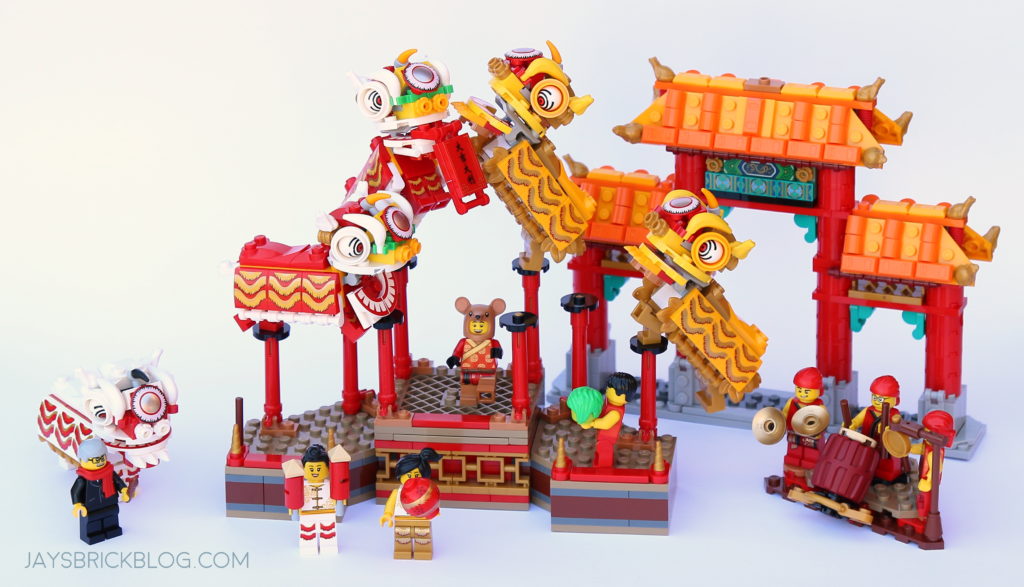 Final thoughts: The Lion Dance set is an absolutely inspired set, and just a complete joy to build.

Firstly, it captures the spirit and look of a Lion Dance performance flawlessly. The set feels substantial, as you get a stage, and temple archway which makes for a great backdrop for the set.

Secondly, I really loved the build. Putting the Lions together was a real joy, especially the first one when you experience how the model comes together.

Another great feature about this set’s build is that you can actually build this with a partner. You can absolutely build the Lions with your partner, or child at the same time – I did so with my wife and I cannot overstate how enjoyable it is when sets can be assembled with someone else.

For a set that celebrates Chinese New Year, where familial bonds are celebrated, I can totally see this being a massive perk for parents who want to introduce this element of Chinese culture to their kids, or for couples to have something to build together.

I’m also absolutely delighted that the LEGO designers opted for zero stickers in a build which has so many intricate prints and designs. They could’ve cut costs, and opted for stickers (which I was honestly expecting), but being greeted with printed elements just makes this feel like a premium set where no expense was spared. This also means this set will likely stand the test of time.

The design of the Lions are just outstanding, and I’m still in awe at how perfectly they capture the look of Lion dancers. Sure, it would’ve been amazing if they could somehow fit an actual minifigures in, but that would’ve been quite clunky if they had done so. 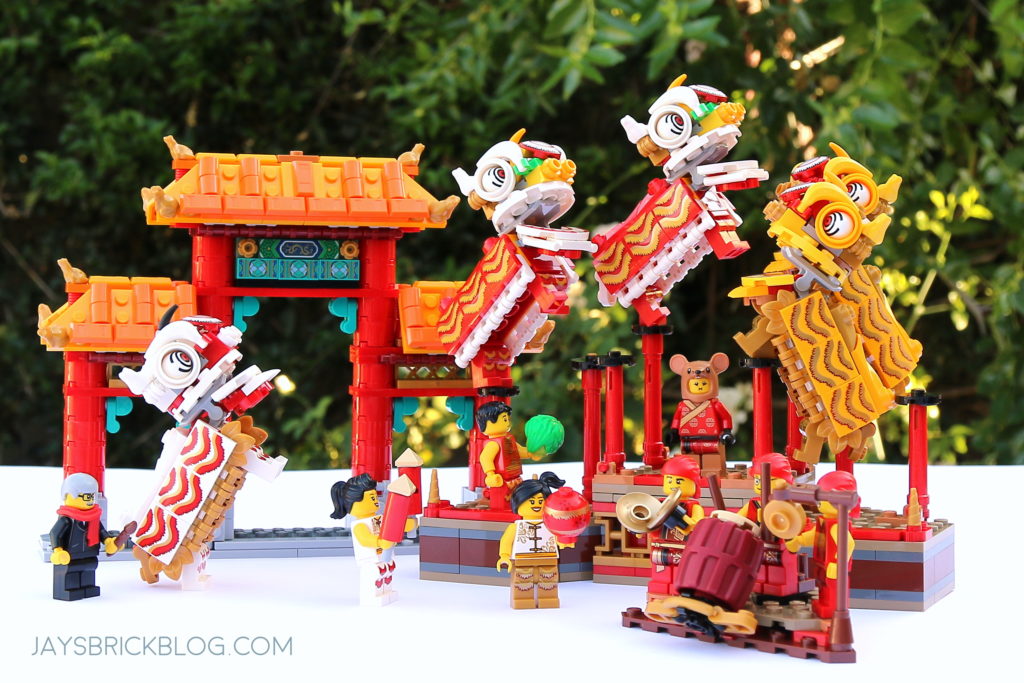 Like 2019’s Chinese New Year’s Eve Dinner this set is just sublime, and makes for a terrific celebration of a Chinese tradition. I haven’t built the Temple Fair Yet, but I feel like this is clearly the winner of the 2020 LEGO CNY pack, and is bound to be a classic LEGO set.

I also need to underscore the set’s incredible value. Even at full price, you’re getting a ton of minifigures, printed elements, five lions AND a robust scene to go with it. It works well both as a playset, and as a display piece.

Like the other sets in the theme, 80104 Lion Dance is an amazing tool to spread awareness of Chinese cultural traditions, and the set designers have honoured the Lion Dance incredibly well with this set.

As a set, 80104 Lion Dance is completely deserving of a perfect 5/5 score, especially now that LEGO has sorted out the set’s global availability, which means that more people can finally get access to these wonderful sets.

Thank you so much for reading! I’ve tried my best to review this set while on holiday, so apologies if the photos aren’t up to scratch.

LEGO 80104 Lion Dance goes on sale worldwide from 10 January 2020 onwards, and you’ll be able to find it at your local LEGO Store, as well as on LEGO.com.

Let me know what you think of this set in the comments and if you’re planning on picking it up when its released!