Last week, LEGO Dimensions launched with much fanfare, heralding a brand new era for LEGO as it seeks to blur the lines between digital and physical play. For those unfamiliar with LEGO’s history, the company has always been obsessed with “winning” the video game-crazy generation over.

LEGO Dimensions represents the next evolution of LEGO’s efforts to remain relevant in an age where digital devices such as consoles & smartphones are one of the primary sources of entertainment for children.

I don’t have a current-gen game console (I’m a PC gamer) so I won’t be able to comment or review the actual game itself. That didn’t stop me from picking up the Portal Level Pack as I am a huge fan of the game and this is pretty much one of my dream LEGO licenses.

Let’s get into a short review of the LEGO elements of the Portal Level Pack! 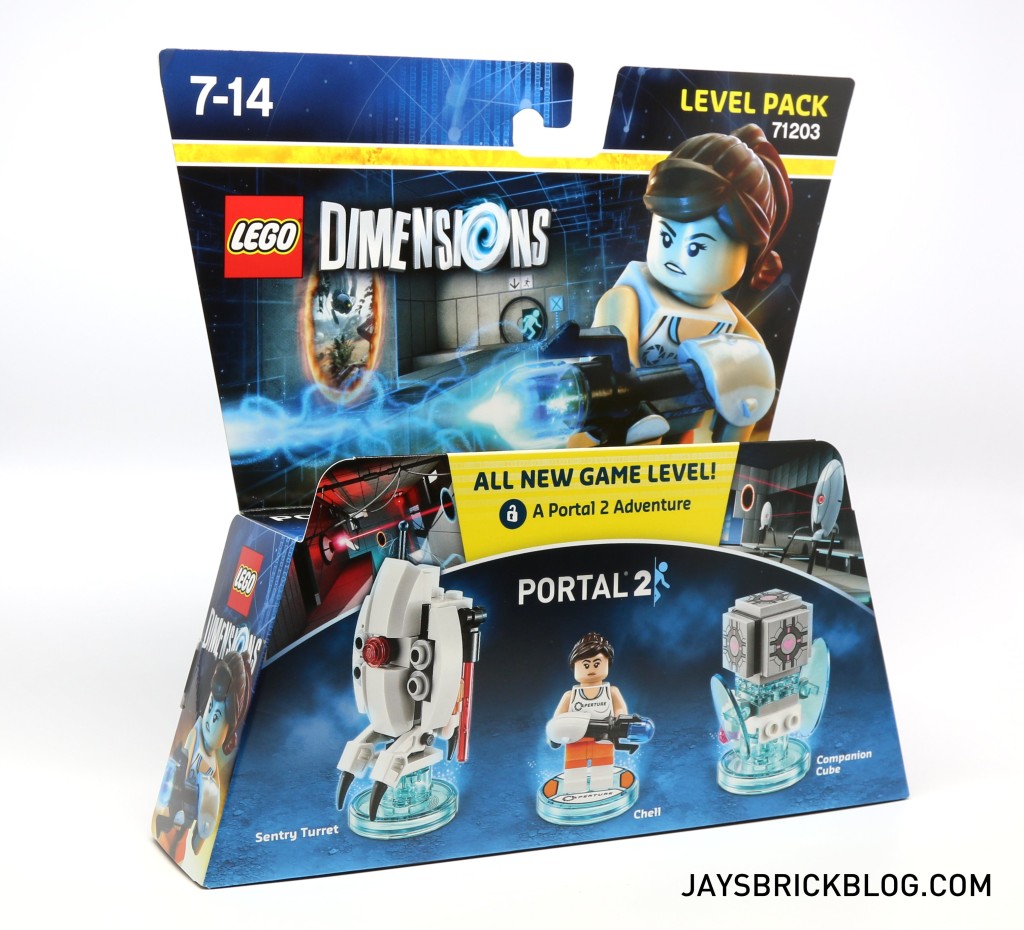 LEGO Dimensions is not an entirely original concept but The LEGO Group and TT Games have ensured that the execution remains fresh.

LEGO’s foray into the US$600m toys-to-life industry is underpinned by the playability of the actual LEGO models – unlike Disney Infinity, Skylanders or Nintendo’s Amiibo which are usually static figures, the lure of building, destroying and rebuilding models should warrant some amount of success for LEGO Dimensions.

How does LEGO Dimensions work? It’s a video game (for the Xbox One, PS4, Wii U) that’s in the same mould as previous LEGO Games – expect tons of platforming, exploring and running around shooting stuff up. The core game is contained within a Starter Pack which comes with a Toy Pad that detects the NFC-enabled bases to unlock additional content.

You can then unlock additional characters in-game through Fun Packs (1 minifig) and Team Packs (2 minifigs) as well as additional worlds and levels through Level Packs.

LEGO have committed to supporting LEGO Dimensions for the first 3 years – here’s a schedule of the upcoming waves of Level Packs, Fun Packs and Team Packs so you can plan your purchases accordingly.

Okay, enough about the video game and on to the actual review of the Portal Level Pack! 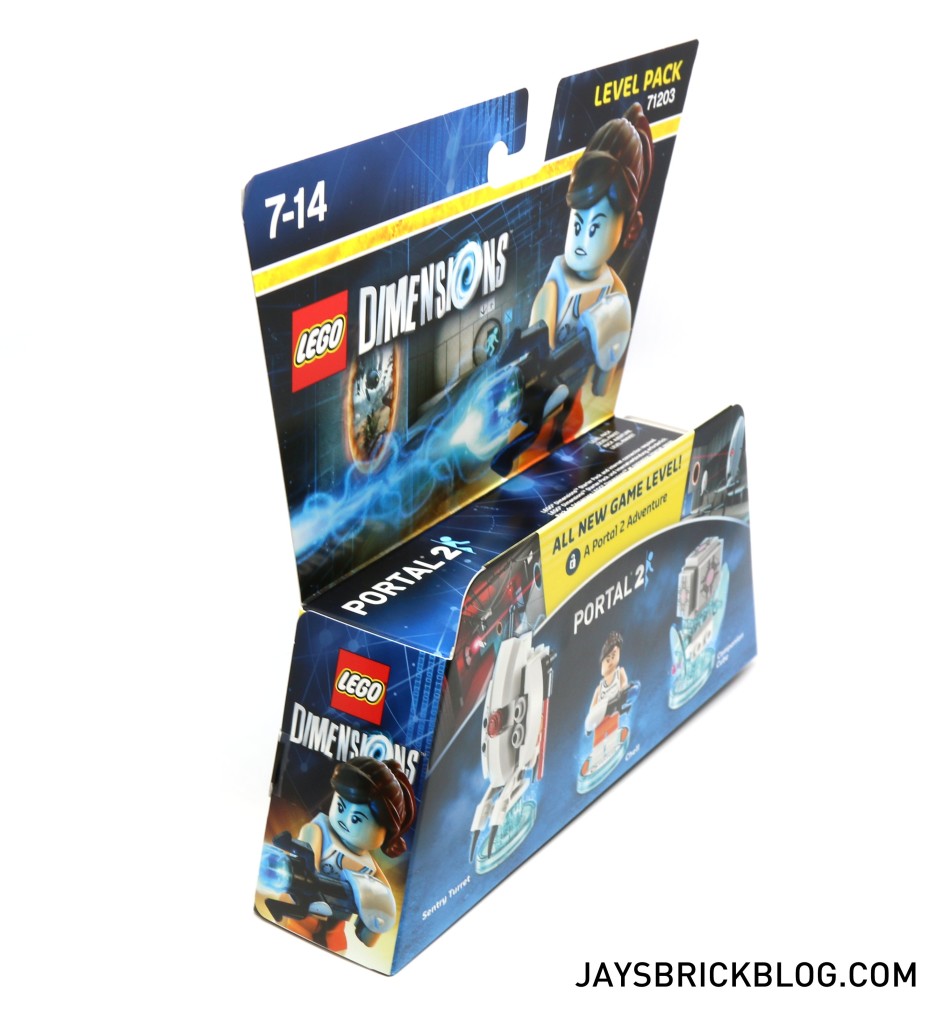 The LEGO Dimensions packaging is a slight departure from the usual LEGO boxes as they’re designed to be hung from retail shelves in the video games section, instead of the regular toy aisle. The art is pretty eye catching and it gives you a pretty good idea of what you can expect inside the box. 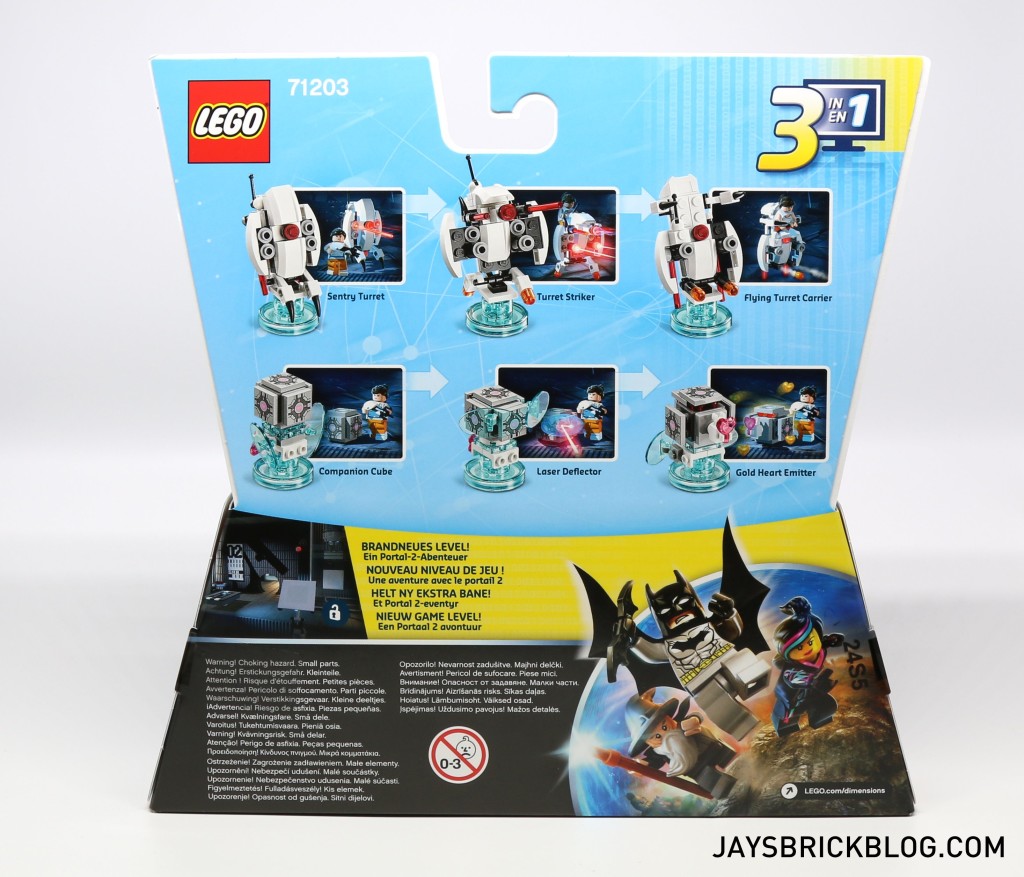 On the back, you get to see all the alternate builds for the Sentry Turret and Companion Cube, which gives the set a decent amount of replayability that’s reminiscent of the 3 in 1 Creator or LEGO Movie sets. 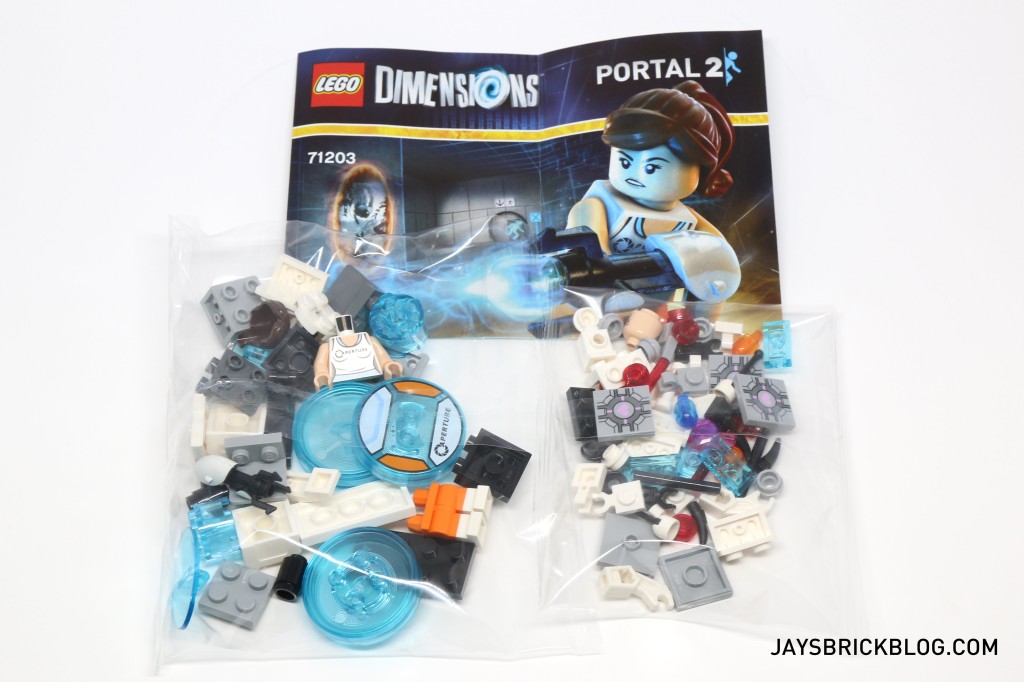 LEGO Dimensions sets are really just glorified polybags. Here’s the contents of the box. With only 85 pieces, be sure to not expect too much. 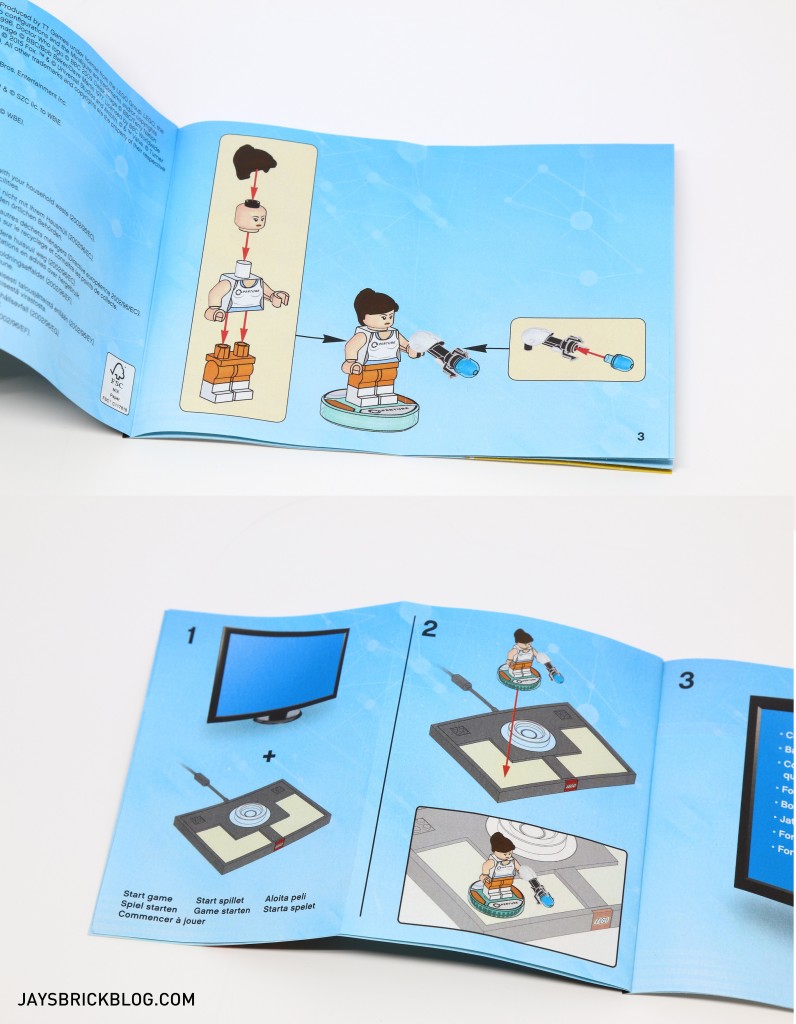 I dug into the instruction manual, eager to put together the Companion Cube but was quite shocked that the booklet only contained a guide to put the Chell minifigure together (how hard could that be?!), steps to allow Chell to interact with the Toy Pad and the rest were just advertisements for LEGO Dimensions and the other packs.

I was perplexed (and kind of irritated) till I discovered that you actually had to go online to get the instructions for the Sentry Turret and Companion Cube. You’ll have to click “Show More” to find the instructions.

Now, I also learned that the instructions for these builds are meant to be accessed in-game as part of the Portal Level but I believe it’s a huge oversight by LEGO not to include them in the box for fans like me who buy these packs purely for the LEGO.

Here’s a look at some of the more interesting elements contained in the Portal Level Pack, before we jump into the Chell minifig and models. 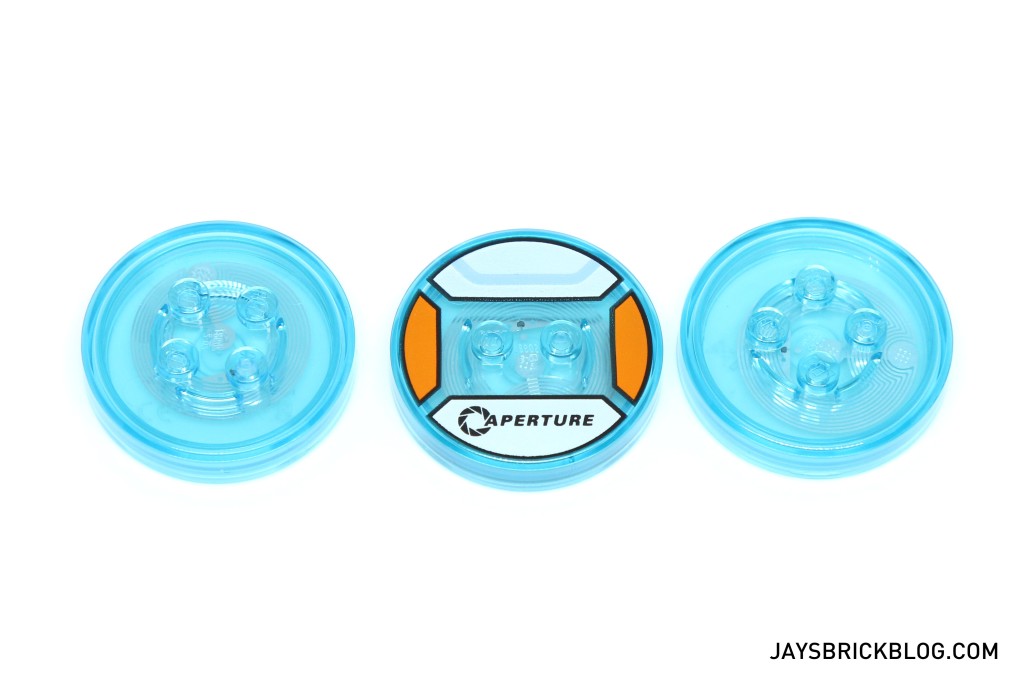 These are the NFC bases that are the heart and soul of LEGO Dimensions. They interact with the aforementioned Toy Pad and are translucent so you can see the circuitry in them. The bases are flat, so you can’t fasten them to other LEGO but they do make really great looking bases for minifigures. The Aperture-printed NFC base is also cool as hell. 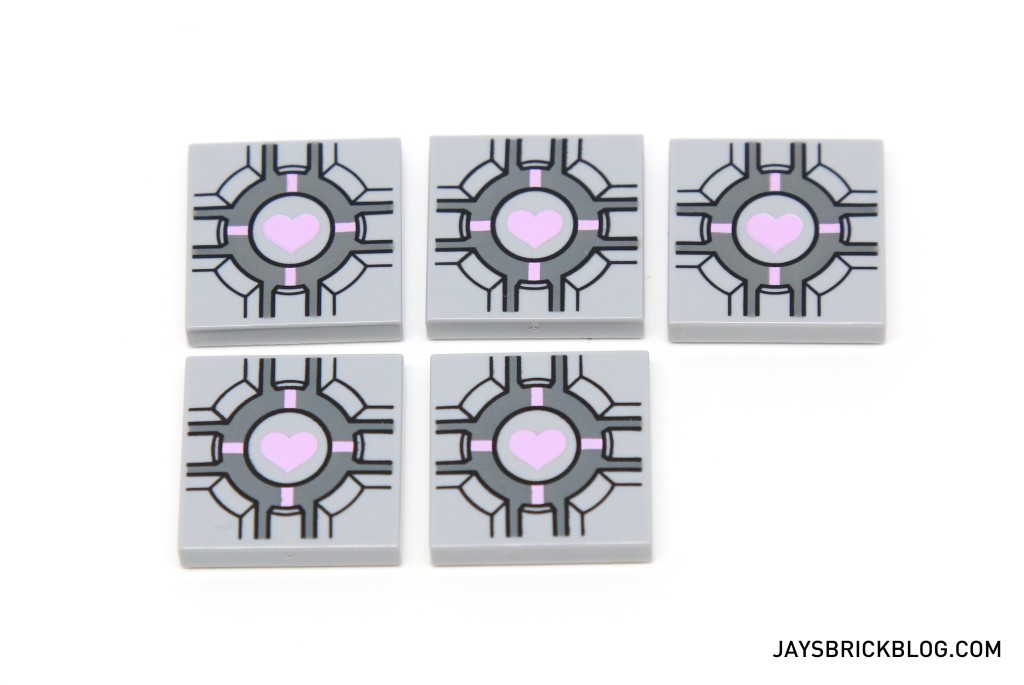 You get 5 printed tiles in the set which make up the Companion Cube’s exterior. ? Thank God that these weren’t stickers. 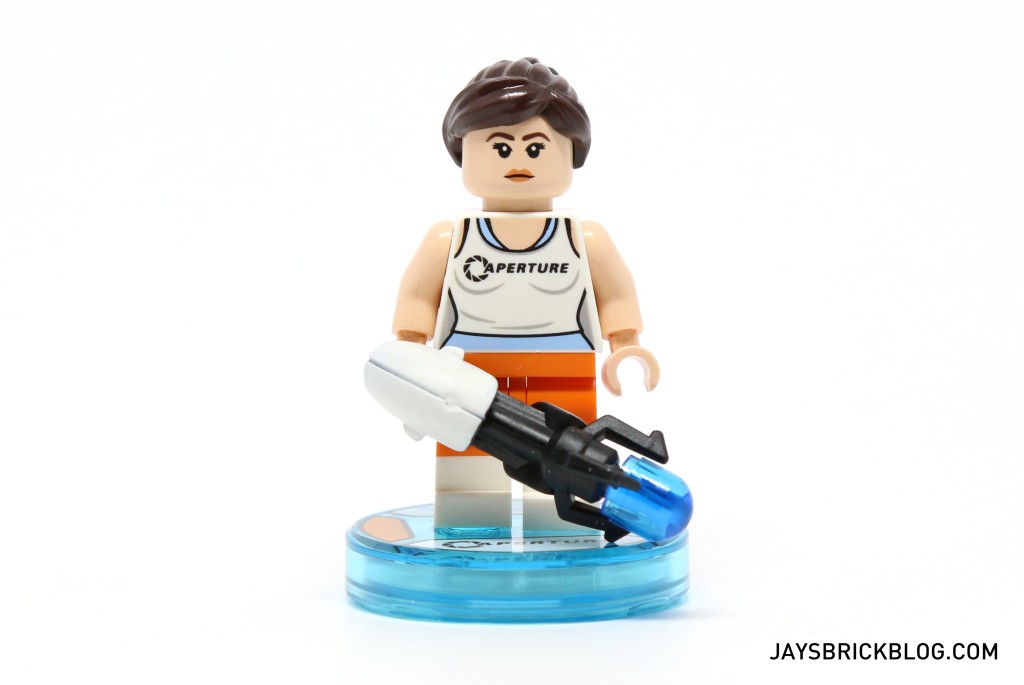 This is probably the most I’ve ever paid (at retail) for a minifigure but boy is she worth it. I’m still pinching myself and having a hard time to believe that we actually have a minifigure version of Chell and she’s perfect in every way.

LEGO have nailed Chell’s appearance and she is fast becoming one of my favourite minifigures of all time. The printing on her torso is sublime, accurately looking like her digital version. Her iconic Aperture-branded tank top looks fab on her and I also love that they managed to include her light blue slip as well. 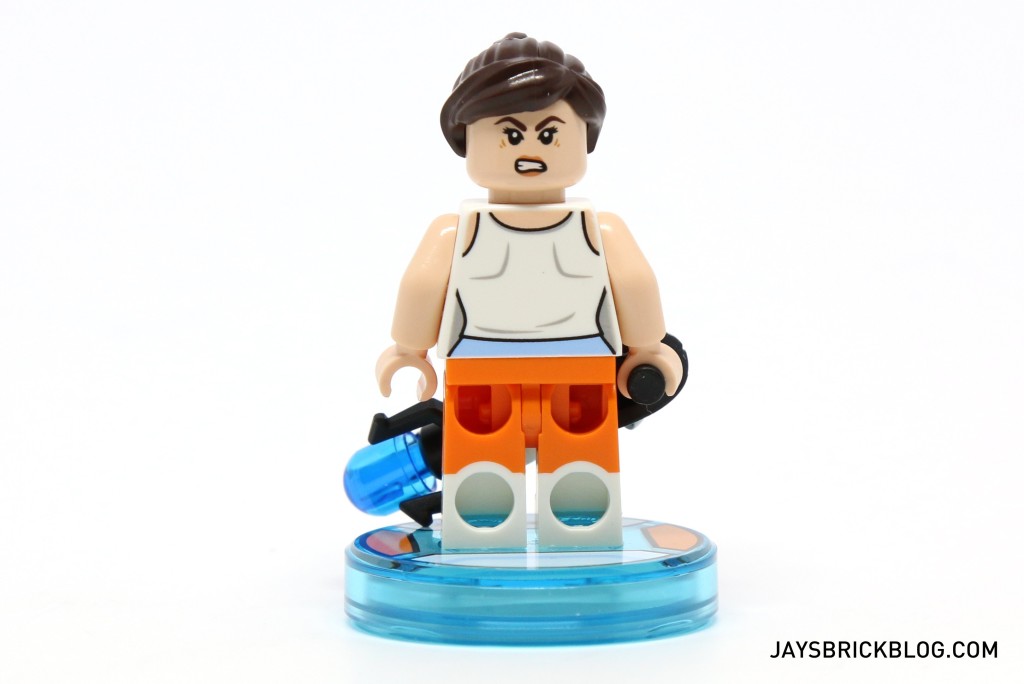 Chell has an alternate angry/annoyed face which has some great details like the creases below her eyes that accentuates her angry expression. Her eyebrows are pretty on-point too. Back torso printing is accounted for and you can also see that she’s benefiting from the new two-tone legs which I’m fast becoming a fan of.

I was quite disappointed to discover that her Portal gun was made of rubbery plastic, instead of regular ABS plastic. Don’t get me wrong, it looks great and all but the material is a serious letdown. I also had trouble getting it to fit in Chell’s hand – I had to apply a lot of force to get the squishy handle into her hands.

Great accessory and all but it feels like a rushed job – almost like something that came out of a 3D printer. Disclaimer: I have no actual idea what 3D printed objects actually feel like. 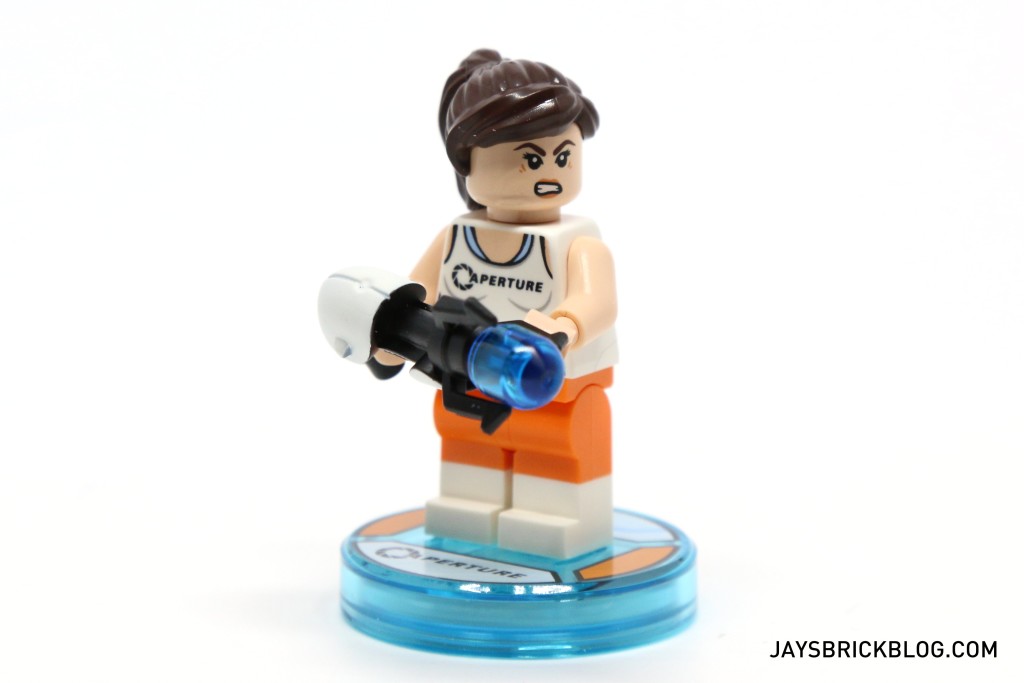 All that being said, it’s impossible not to love Chell in minifigure form especially if you enjoyed the Portal games. 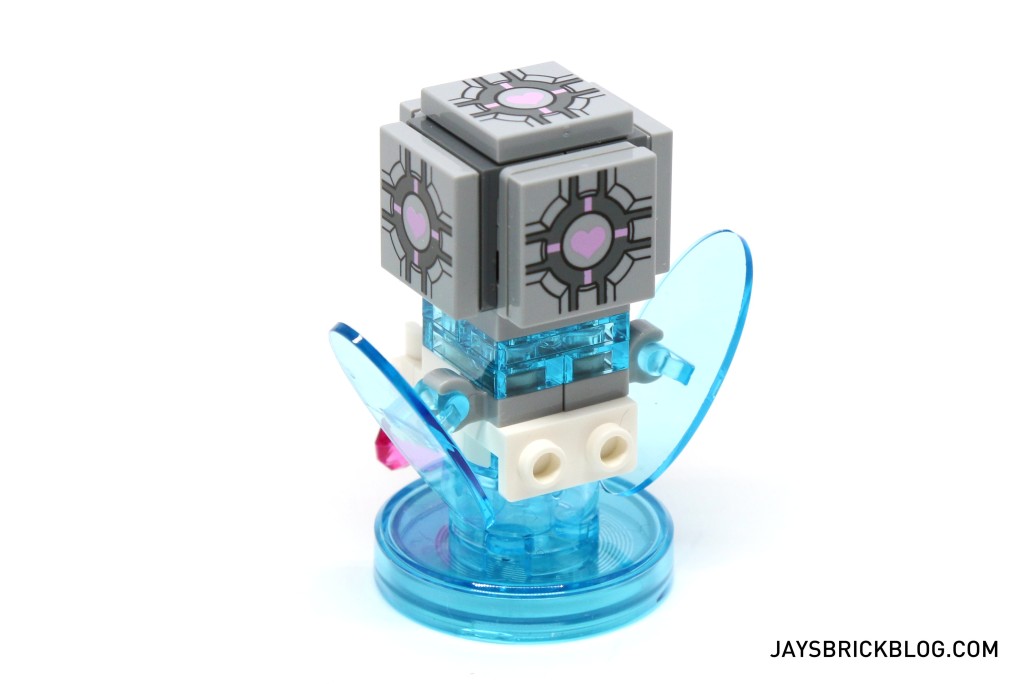 This is the Companion Cube which is conveniently placed upon a translucent pedestal and has a couple of deflectors on its base as well. You can easily detach it from its platform but it looks quite plain on its own. 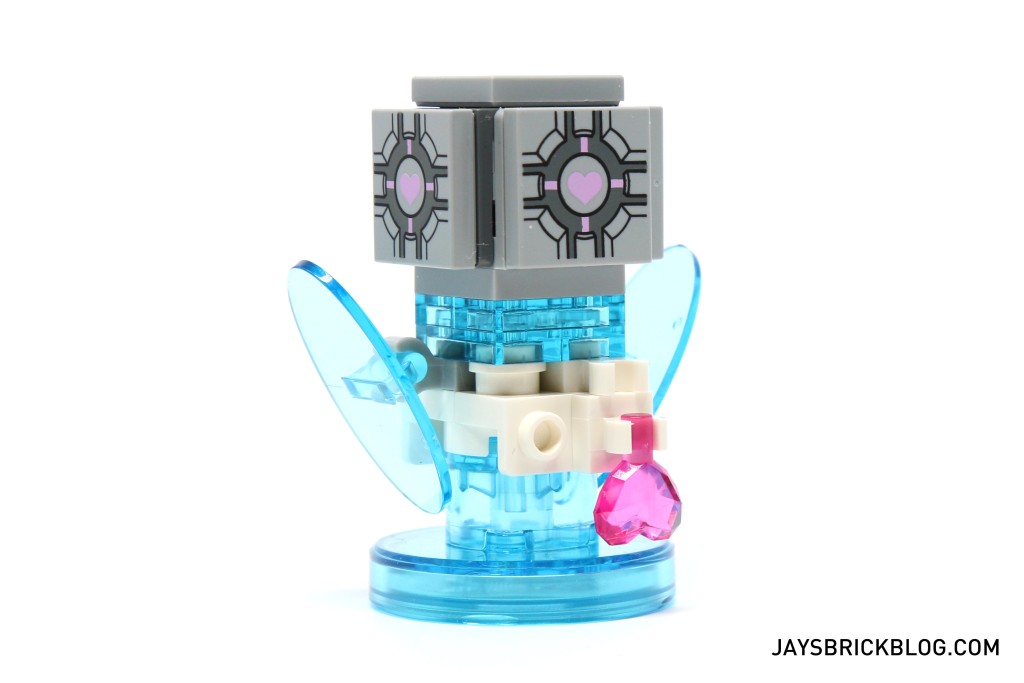 Flipping it around, you can see a little heart piece that hangs off the back of the platform.

Can’t have a Portal-themed set without a Companion Cube – at the very least the tiles are printed which makes it look really good. 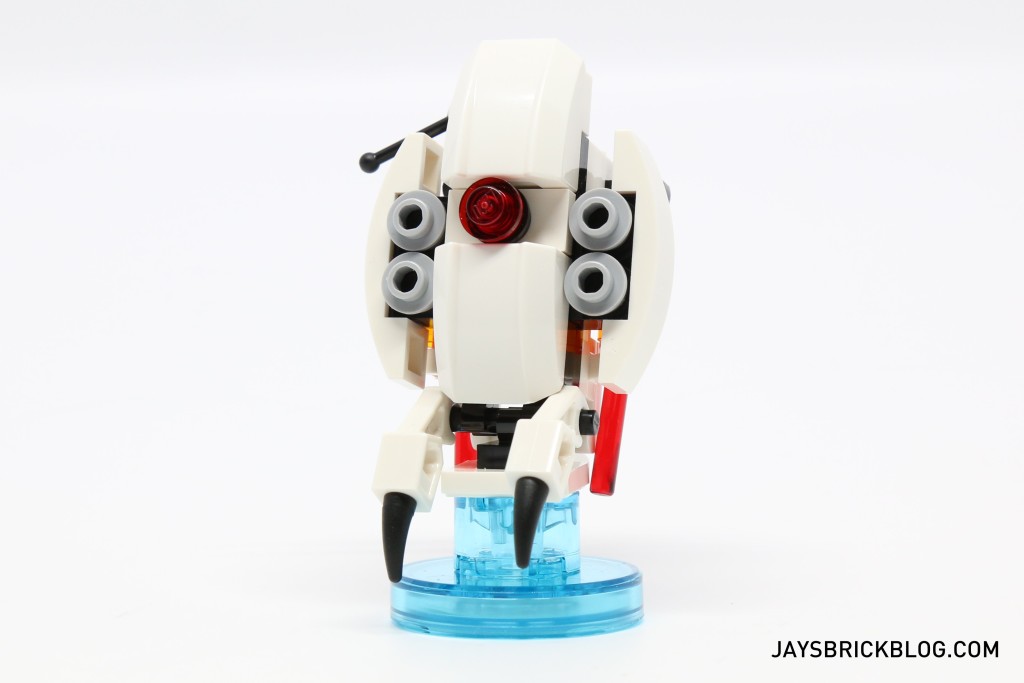 The Sentry Turret has a lot more going for it, namely because it’s not as plain as the Companion Cube. LEGO have done a commendable job replicating the Sentry Turret’s look, sleek curves and all. The turret has its “arms” extended out, revealing the machine guns on both its sides. 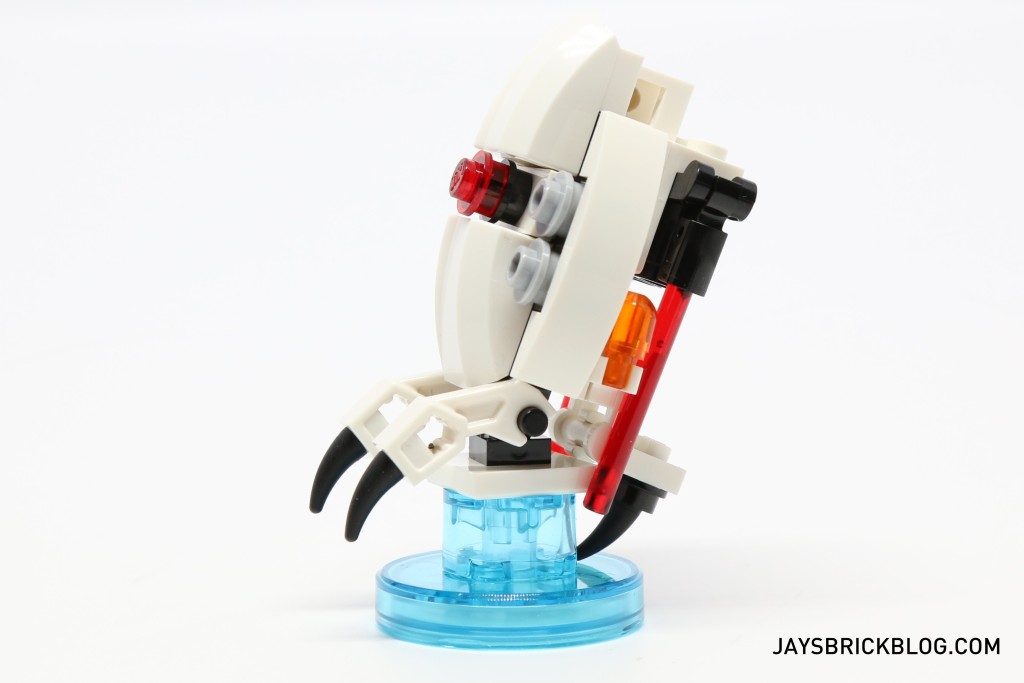 It’s probably connected in some way to LEGO Dimensions Portal Level, but you’re also given 2 alternate models for both the Companion Cube and Sentry Turret, which is a pretty nice touch.

Granted that the alternate models aren’t that drastically different, it’s still quite nice to have the option to break the models down and rebuild them – the very essence of playing with LEGO. 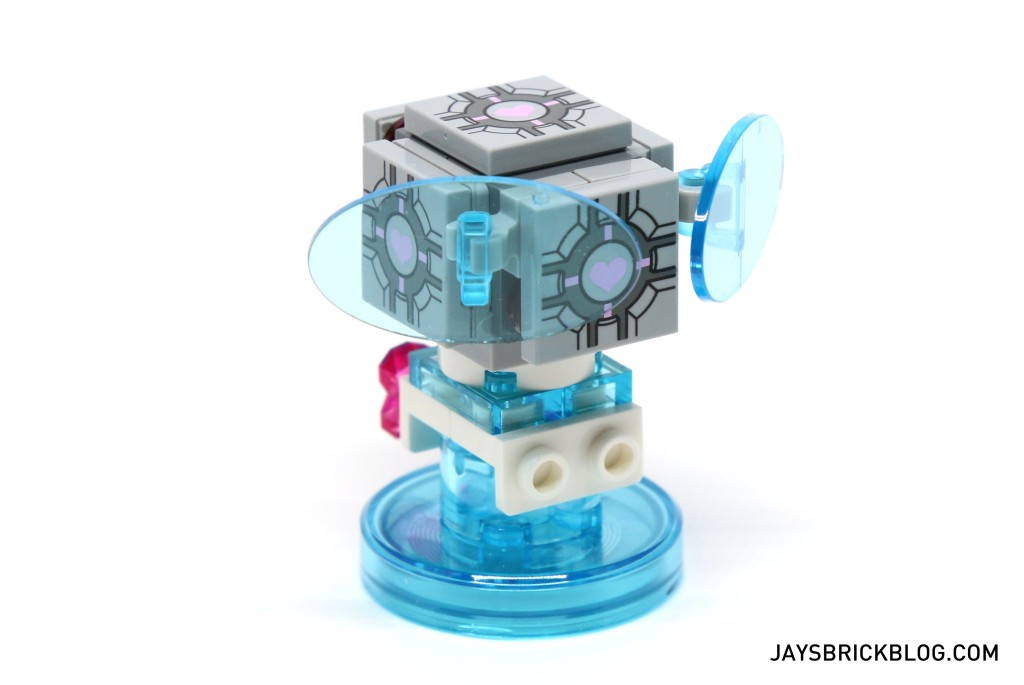 This is the Companion Cube as a Laser Deflector. 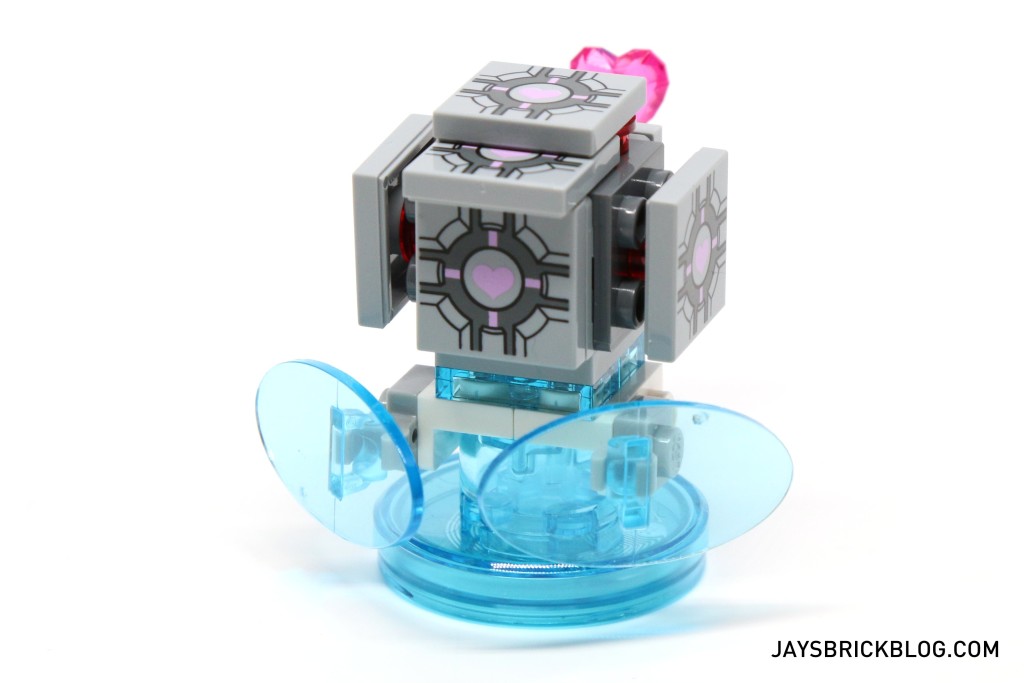 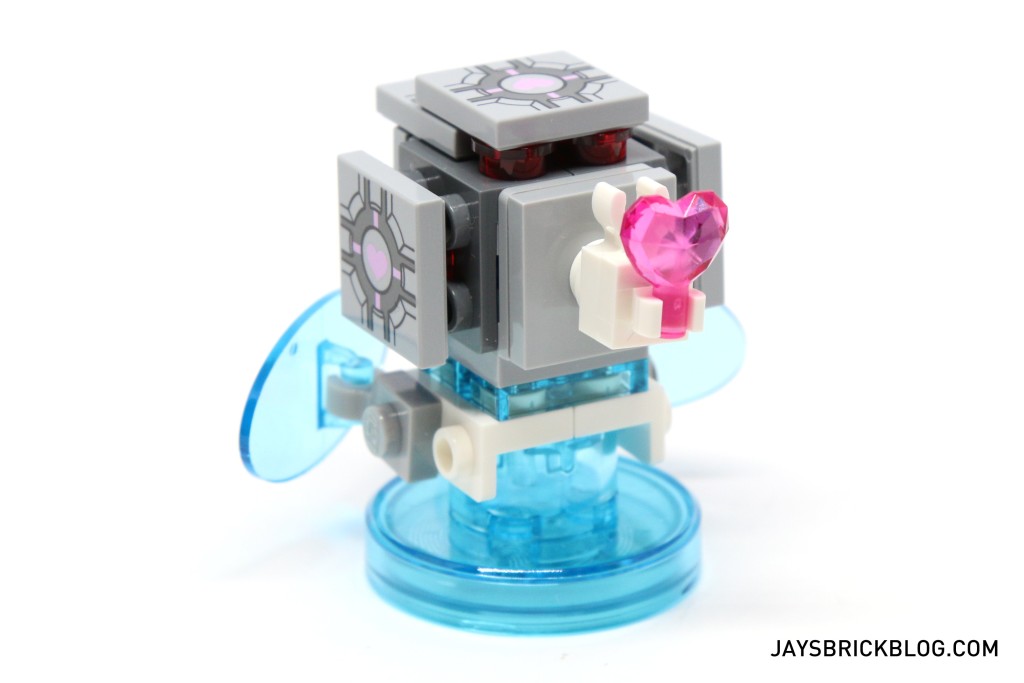 And the Companion Cube as a Gold Heart Emitter. For the Sentry Turret, this is its alternate Turret Striker form which is much more menacing with the lasers firing and all. 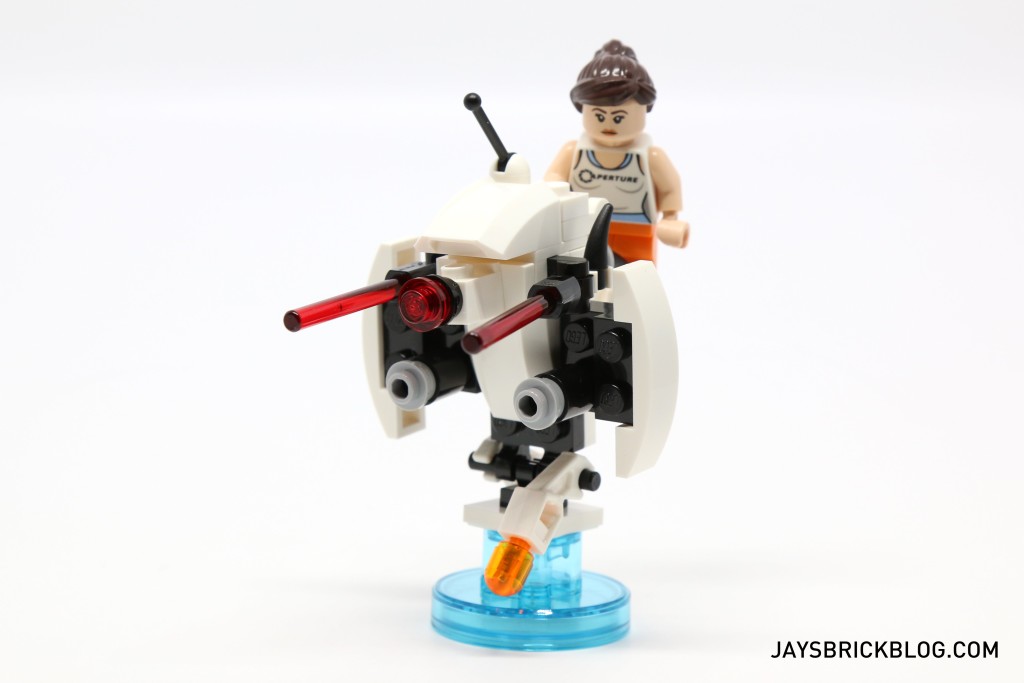 Chell can grab hold of the Turret Striker from behind. Lastly, this is the Flying Turret Carrier form. 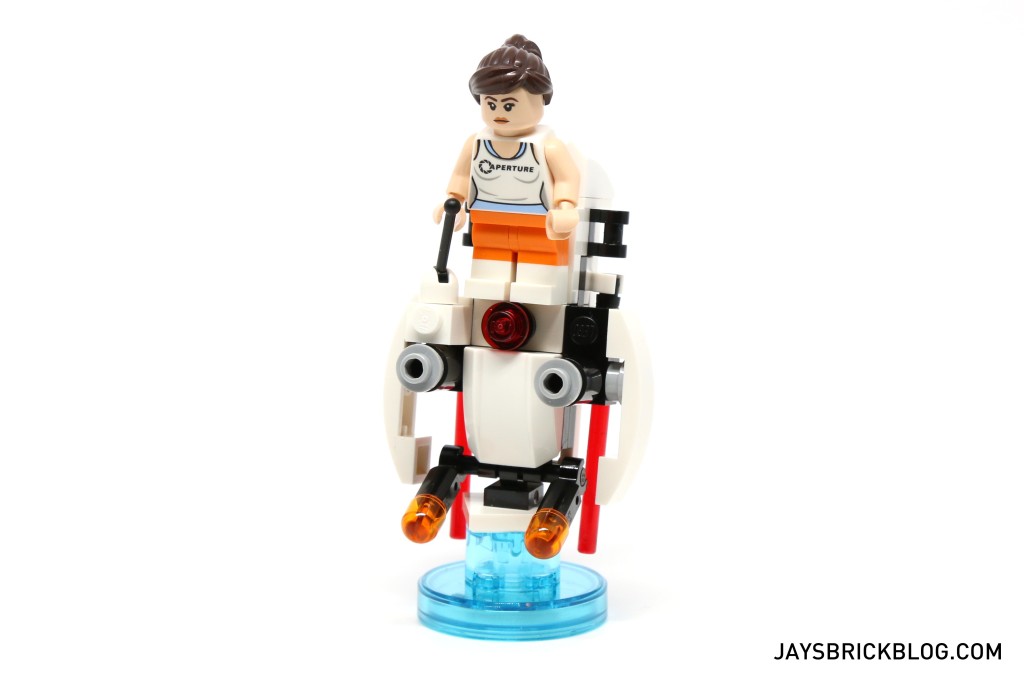 Chell can be attached to the Flying Turret Carrier as well. 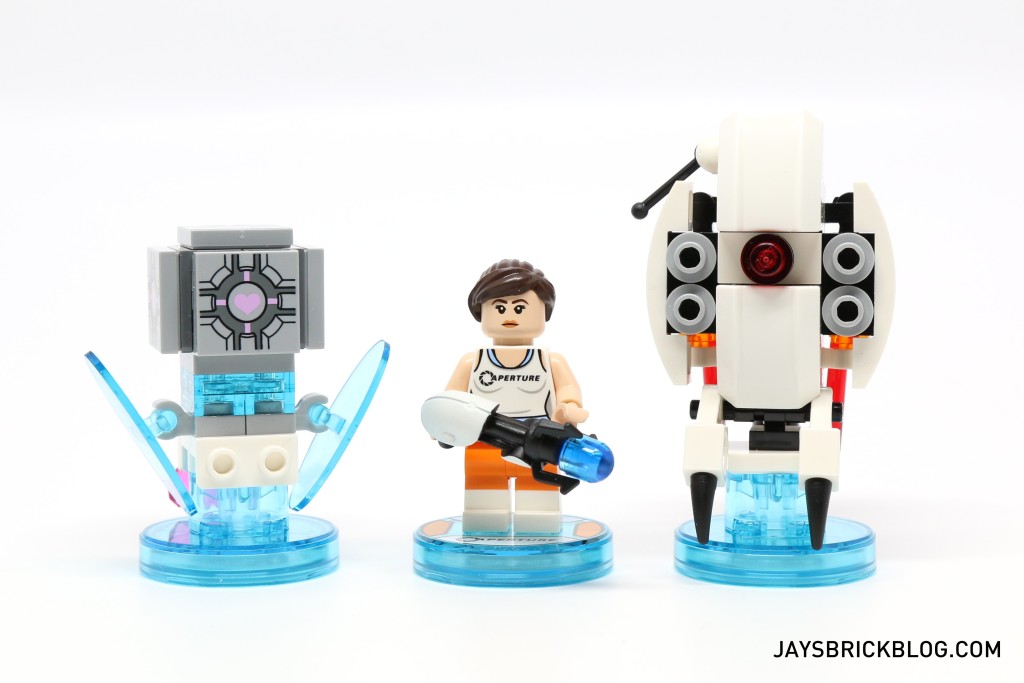 Final thoughts: LEGO have done it – they’ve managed to come up with a way of convincing people to drop $40 on a lone minifigure and a couple of LEGO elements.

That’s putting it quite simply – obviously if you enjoy LEGO Video Games, you’re going to get way more value thanks to the unlockable digital content but I’m writing this as a LEGO fan with no intention of buying a console or the game.

If you’re just in it for LEGO, the value contained in this set is atrocious and I was in a state of disbelief when I realised that I paid $40 for a glorified polybag. Granted that it’s a Portal-themed set – a license that will probably never become available as a regular LEGO set, it was a very hefty price to pay. The very fact that I bought it without much hesitation can be considered as a coup for LEGO.

I totally expect them to stuff LEGO Dimensions packs with rare and coveted minifigures, just because the margins are so huge. I do hope that like Disney Infinity and Skylanders, we’ll get to enjoy deep discounts as retailers often apply heavy discounts to the toys-to-life category.

Price aside… I really enjoyed the Portal Level Pack. Chell is an outstanding minifigure and she’s been awarded “Permanently on Display” status alongside the Companion Cube and Turret. Would I enjoy paying $40 for a polybag if it wasn’t a license or theme that I am desperately in love with? Probably not.

Thanks for reading my review! Have you gotten into LEGO Dimensions? Let me know your thoughts on the video game or sets in the comments!