Or the polybag known as 30168 Gun Mounting System, which honestly is the most boring name you could come up with for one of, if not THE coolest minifig that has ever been released. 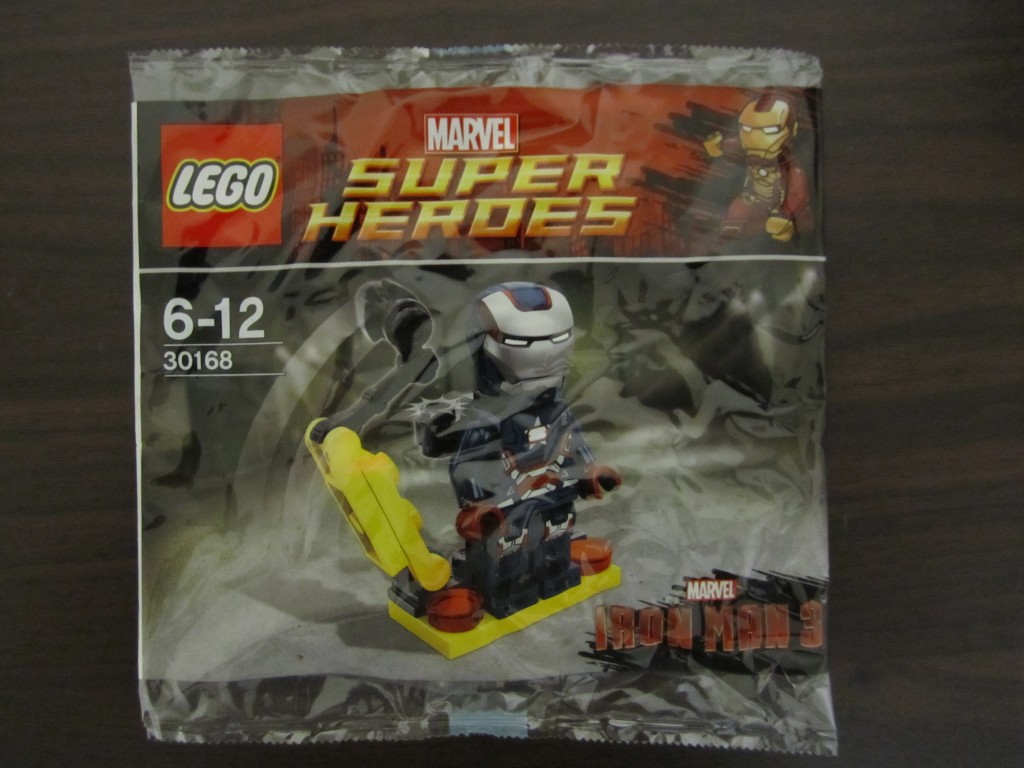 I’m just going to be calling it the Iron Patriot minifig from here on, because that’s what it really is.

The Iron Patriot minifig is a pre-order bonus from Australia’s largest gaming chain and Gamestop equivalent, EB Games. Essentially, you had to pre-order the latest Lego Marvel Super Heroes game to qualify for the pre-order bonus. 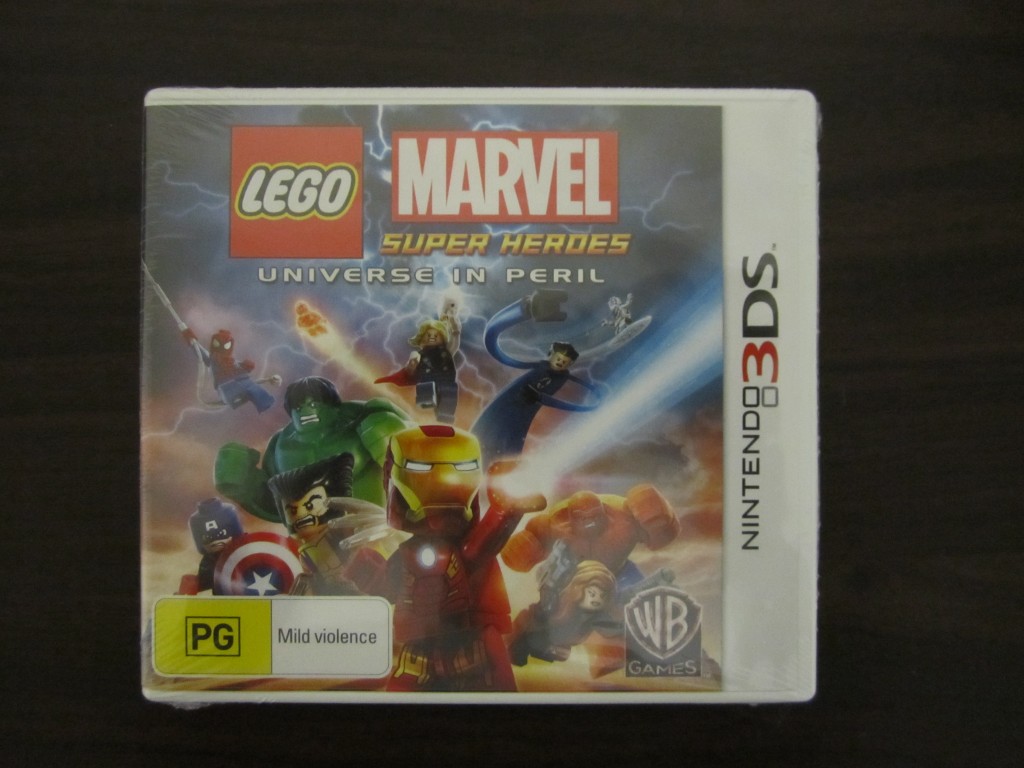 I picked this up this weekend as I’ve been quite busy with work and only just managed to liberate it from its polybag prison and I have to say that my expectations were pleasantly exceeded.

Here’s what you get when you  pop open the Iron Patriot polybag. 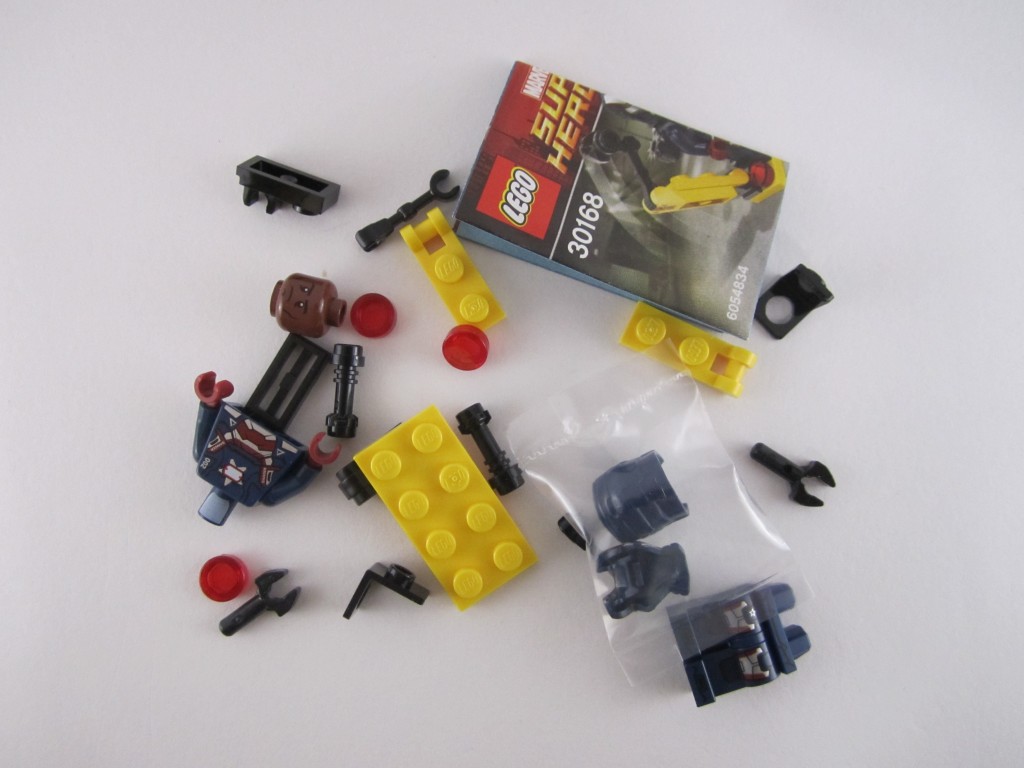 You get a tiny manual with a pretty neat advertisement for the Lego Iron Man 3 sets on the flipside. 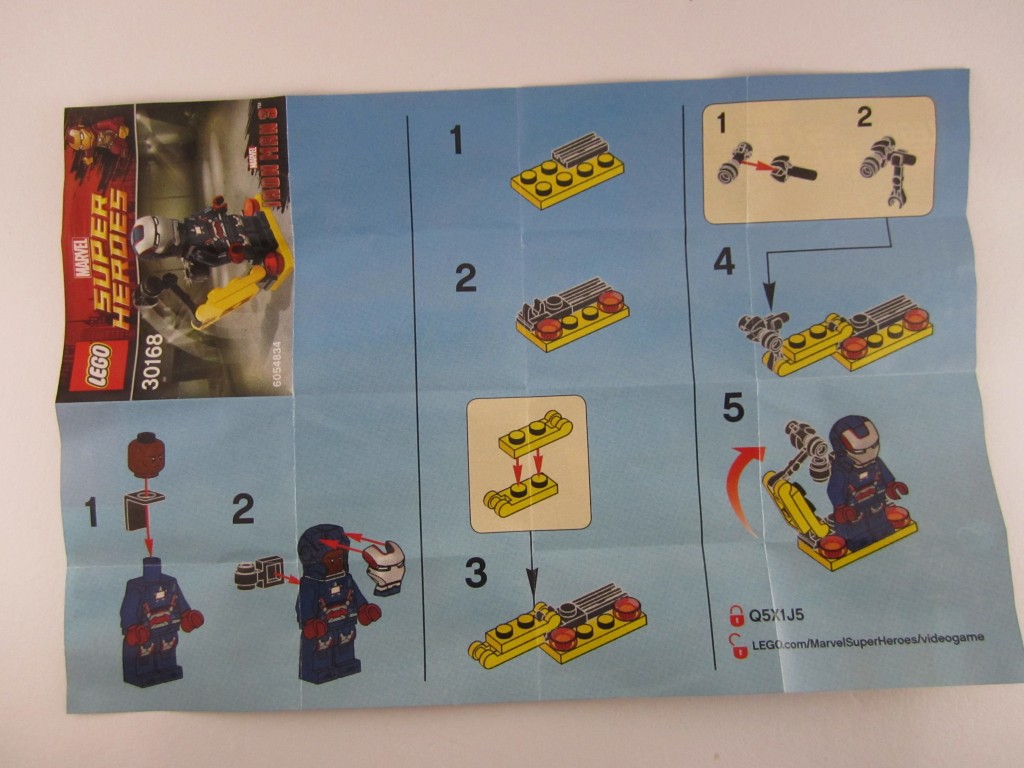 There’s a code with a link on the manual, but typing it into my browser sent me to a 404 page on Lego’s website. Pretty strange. I’ll sniff around to find out what the code is supposed to be for. 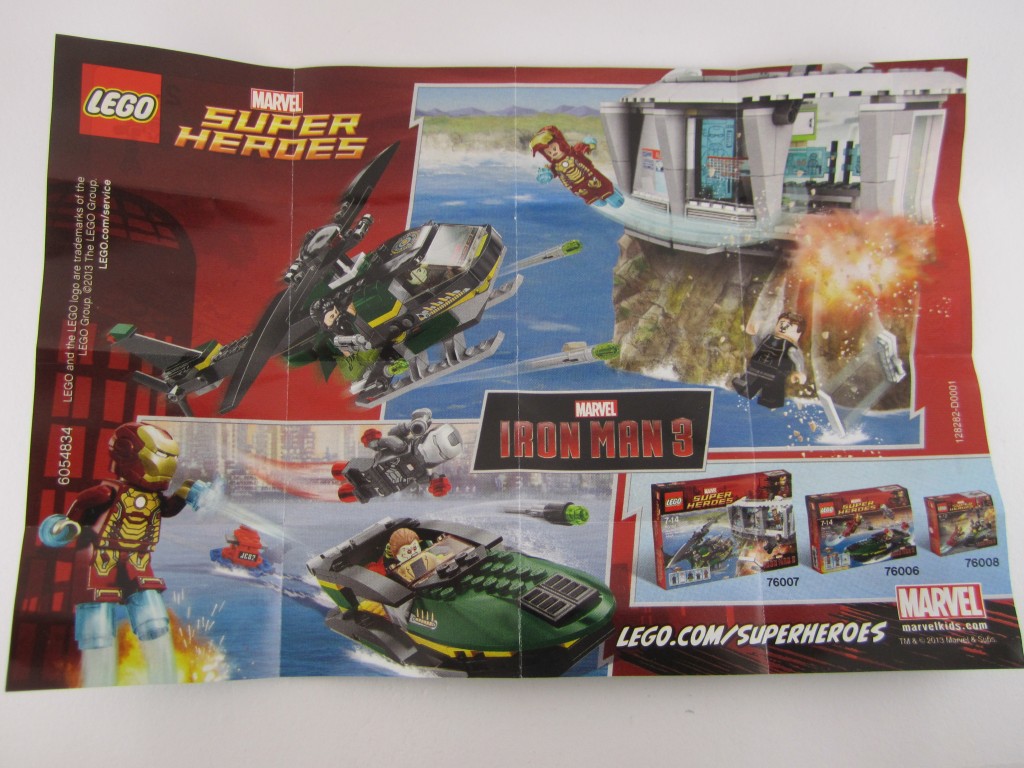 It seems a little weird that we’re only getting the Iron Patriot minifig now when Iron Man 3 hit the cinemas way back in April this year. But hey, better late than never. 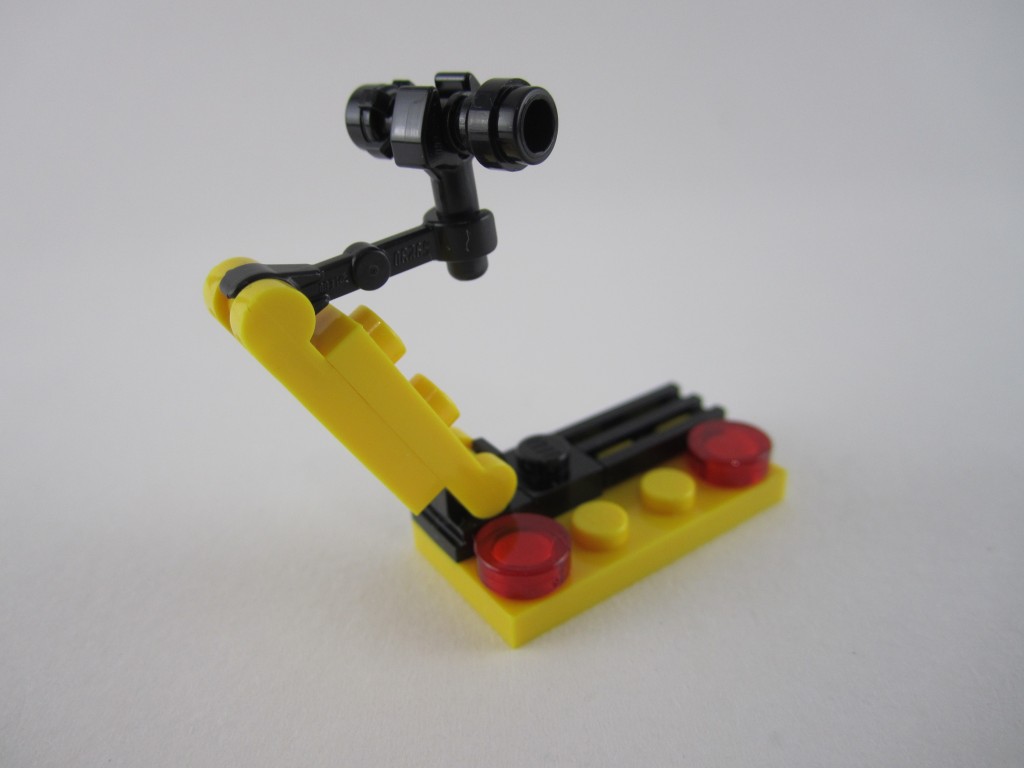 Here’s the assembled “Gun Mounting System” that the polybag is named after. Nothing too fancy about this. It’s meant to be some sort of robotic arm that “mounts” the little gun piece on Iron Patriot. This will make sense in a couple of photos, I promise. 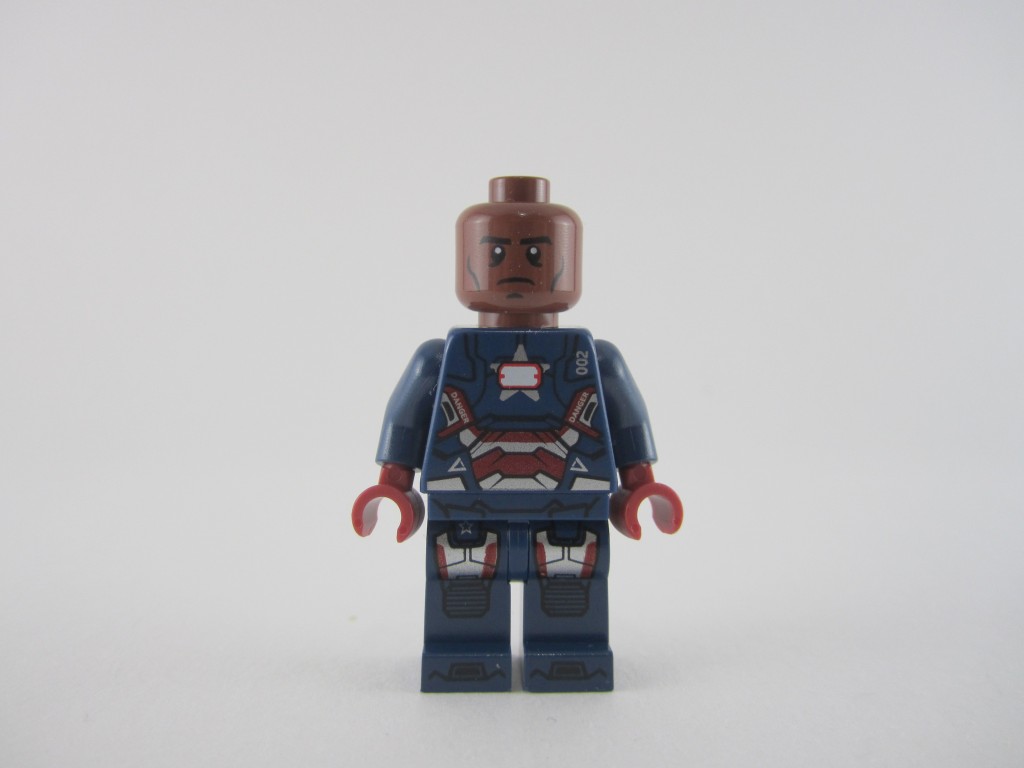 And here’s the Iron Patriot minifig in all its glory. In the movie, Iron Patriot/War Machine aka Lieutenant Colonel James Rhodes is played by Don Cheadle and the minifig does an okay-ish job of replicating his face. Getting a dark skinned minifig head is always nice since they’re exceptionally rare. The printing details on both the front and back is nothing short of exceptional. Like most licensed sets, Rhodes has 2 faces, a neutral serious looking one and an angry one for things get ugly. 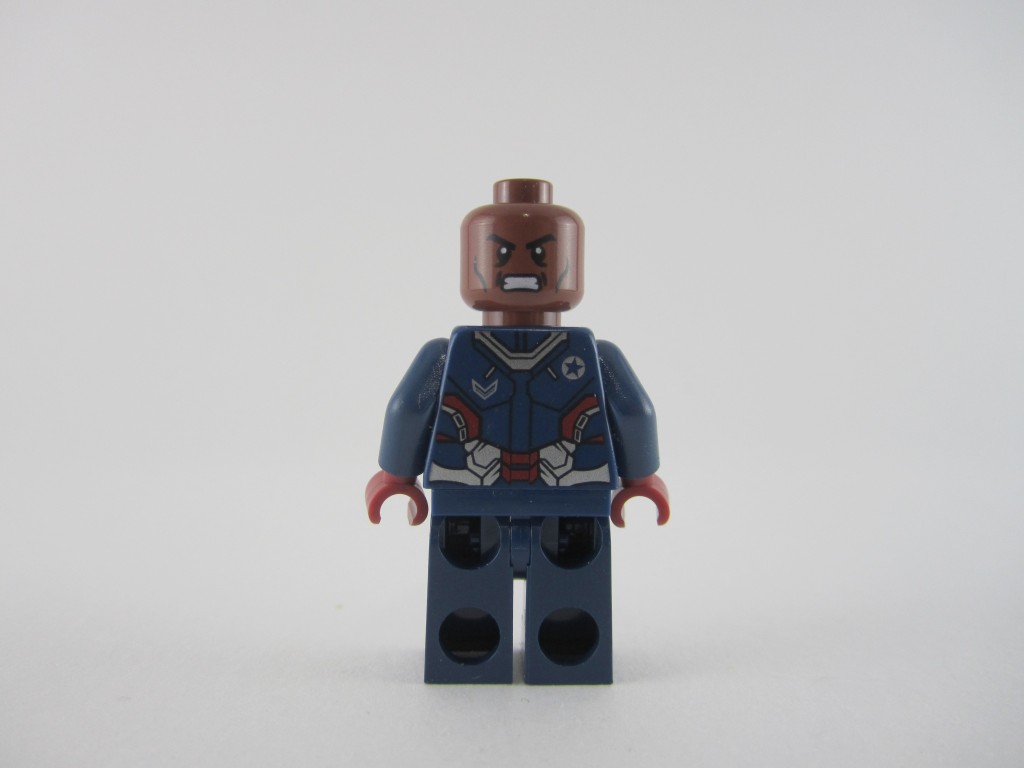 The minifig uses the vibrant colours of the American flag to great effect with metallic accents making the design pop effortlessly. Little details like the word “DANGER” on the armour ties it all nicely together. I’ve seen a lot of minifigs and I have to say that this is one of the best designed and executed ones that I’ve had the pleasure to come across. 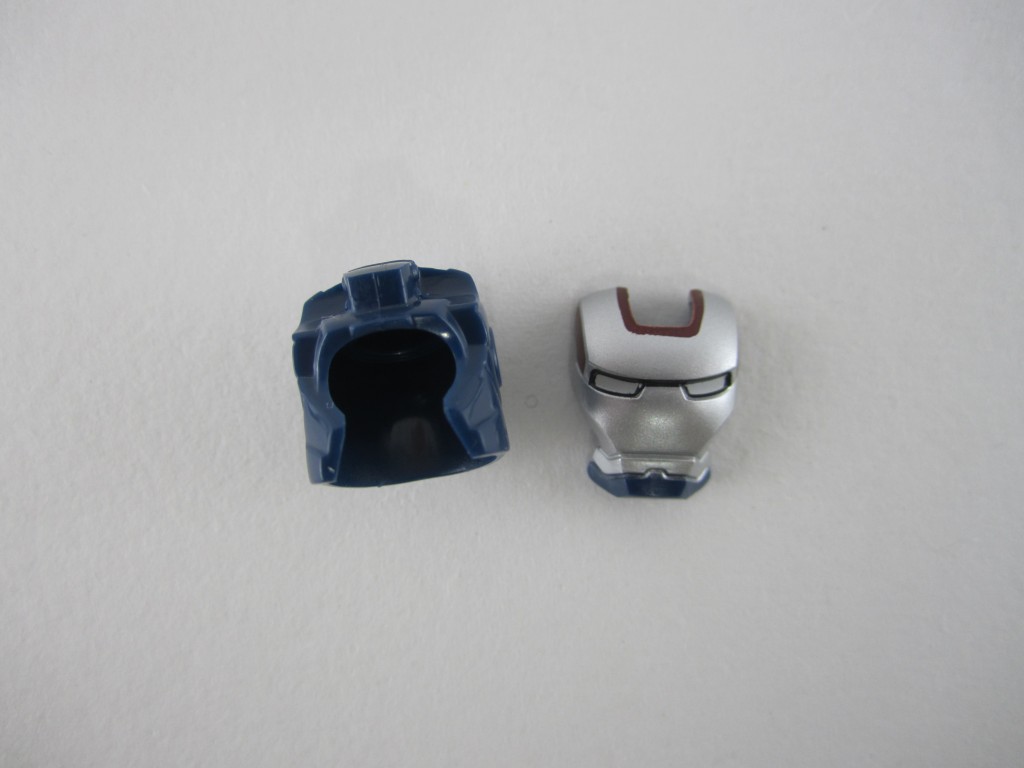 The brilliant helmet piece. Again, Lego has spared no expense with the paint detail. I am especially delighted by the blue outline on the mask’s eyes which makes the white “eyes” look that much more menacing. The paint work is superb and almost flawless. 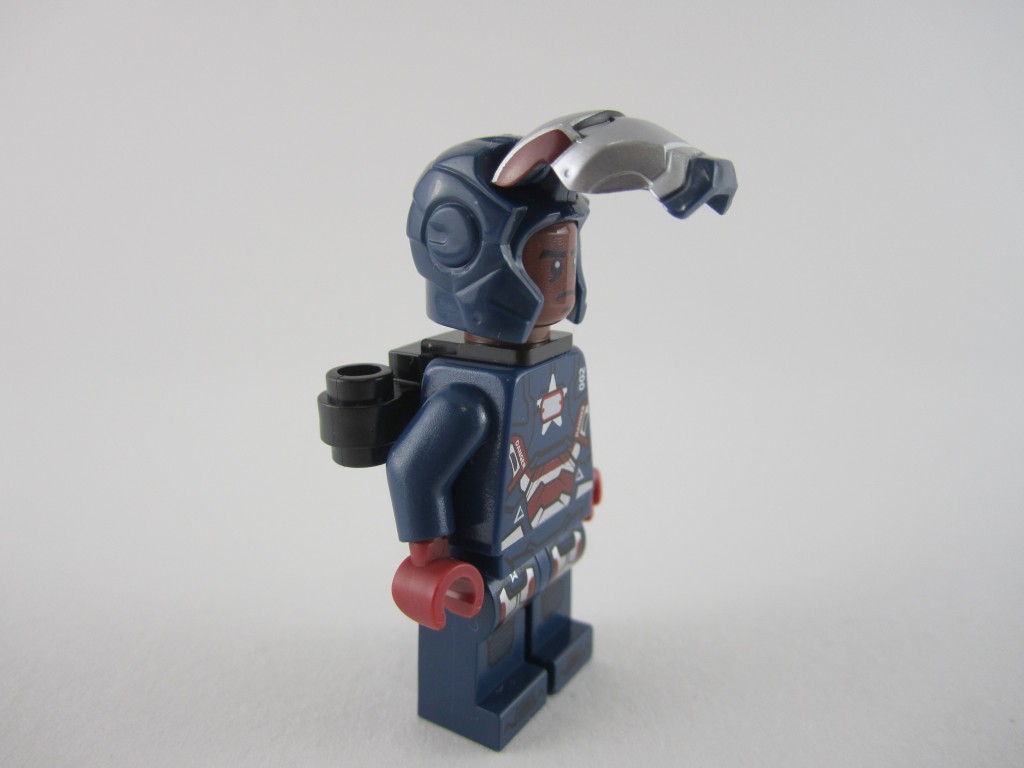 Some assembly required. There’s a neck piece which helps support his shoulder guns which I personally don’t like since it makes his head look like its separated from the body. 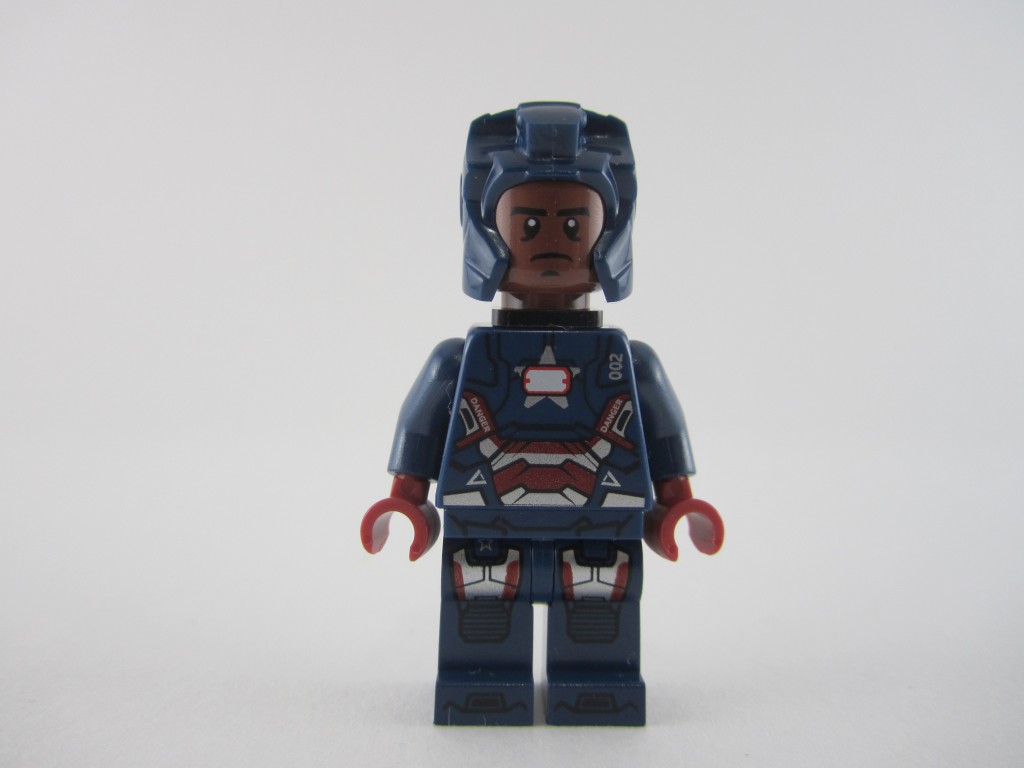 It messes up the minifig’s ratio by making the neck look longer than it should be. 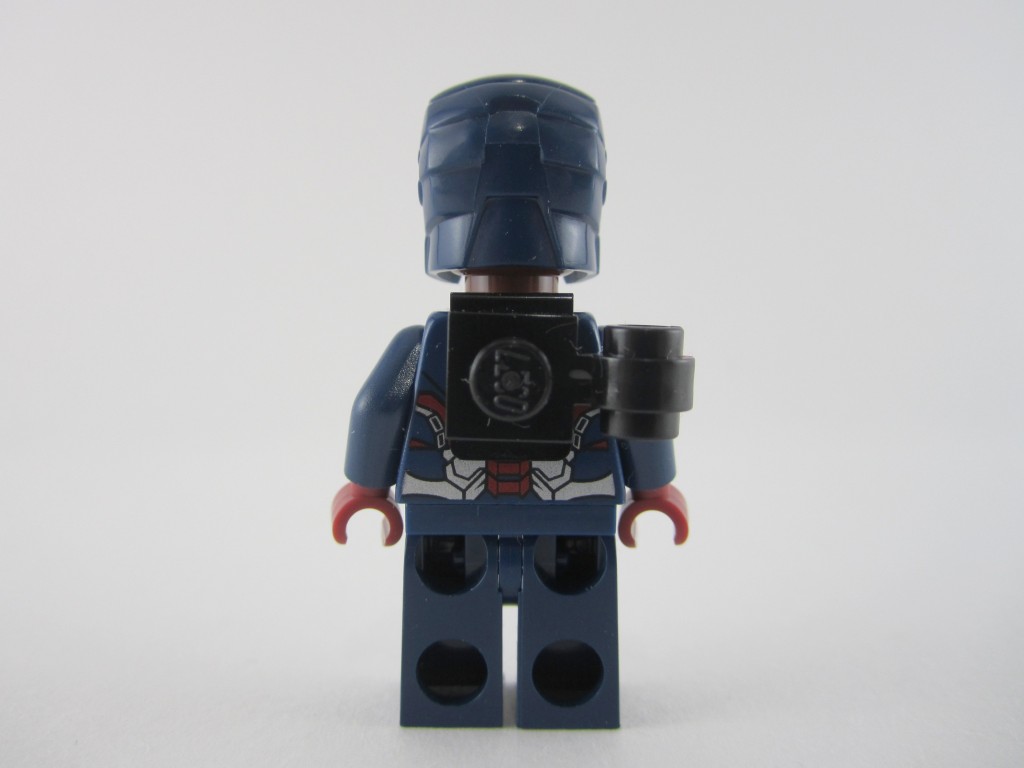 From behind. The neck piece opens up many possibilities, in case you ever wanted to slap a bigger gun on the Iron Patriot. 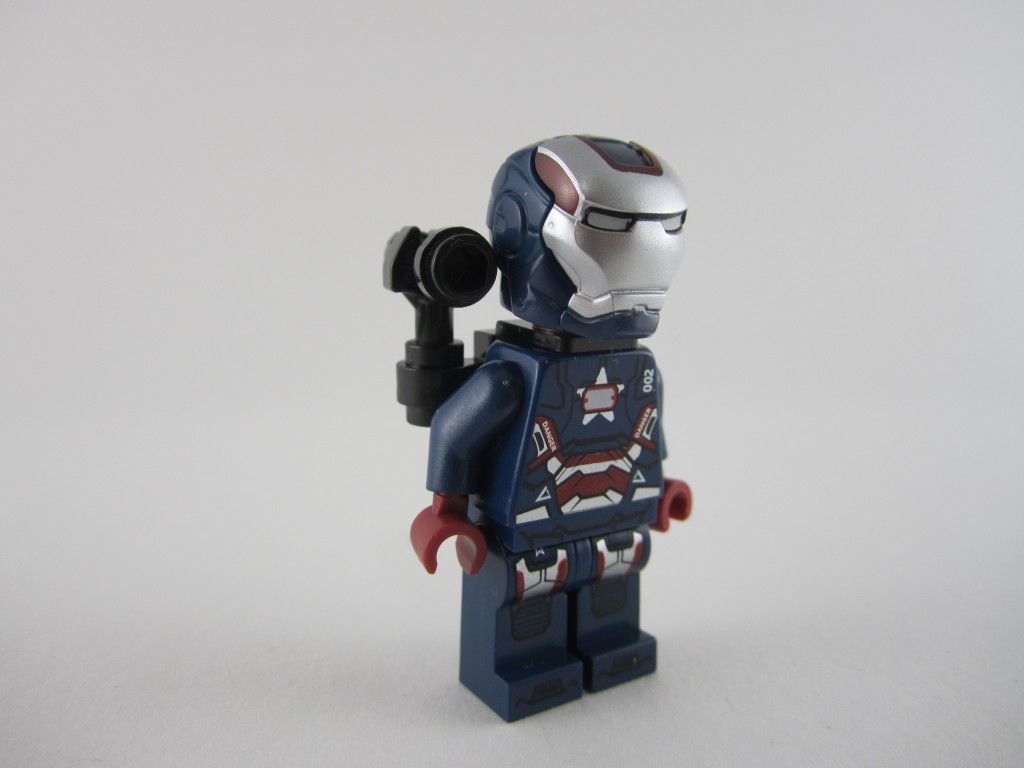 Here he is with the gun fastened on. Again, I personally dislike it as I feel that it detracts from the minifig’s charm and looks totally out of place. Sometimes, less is more. 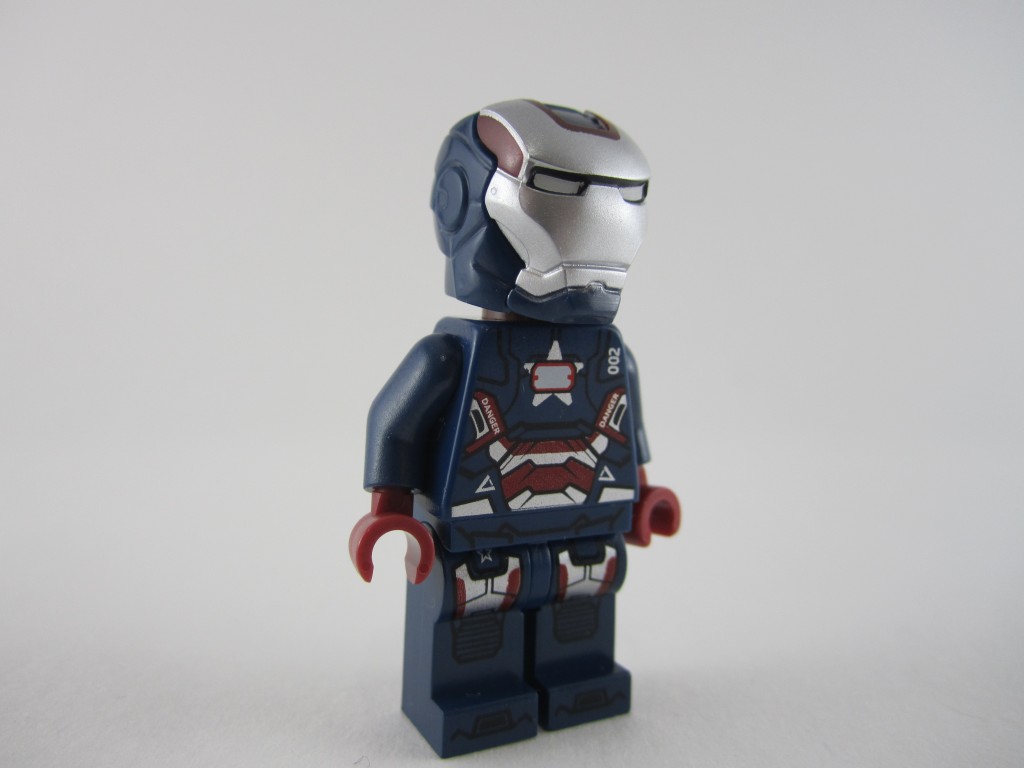 See? Doesn’t it look much better on its own? 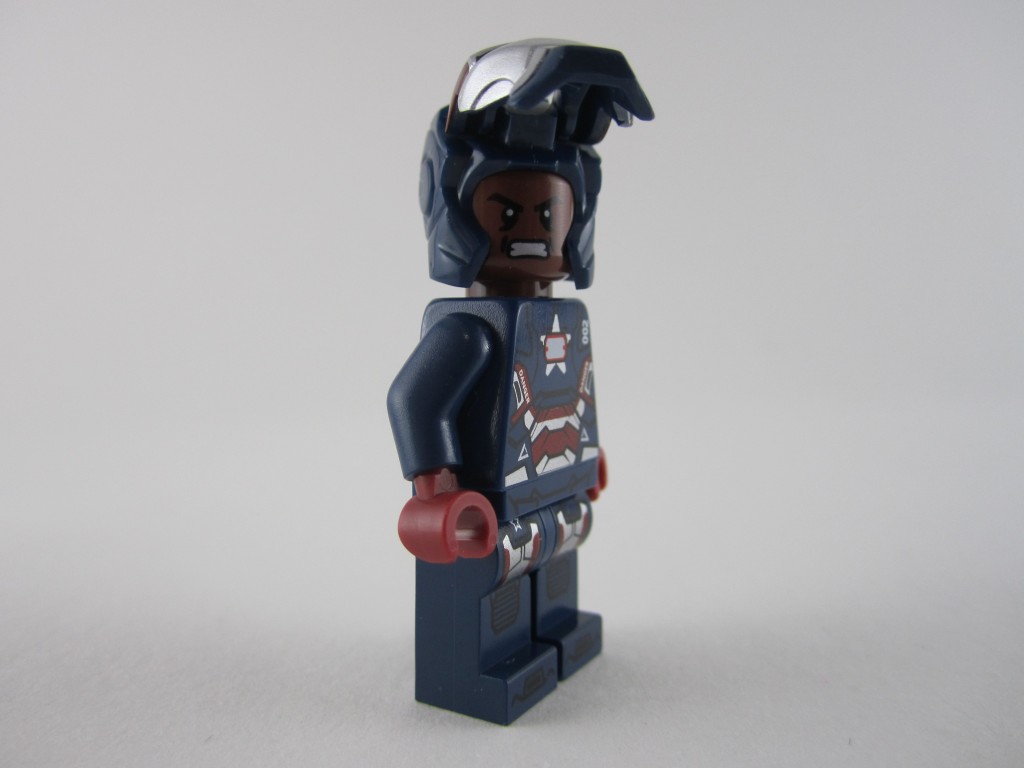 I previewed the minifig on my Instagram and Twitter and a couple of my friends were very very impressed by the mask. It’s not new seeing as how the original Iron Man minifig has been out for almost 2 years now but it always manages to blow people away when you show them that it’s actually a visor and not a solid headpiece/helmet. 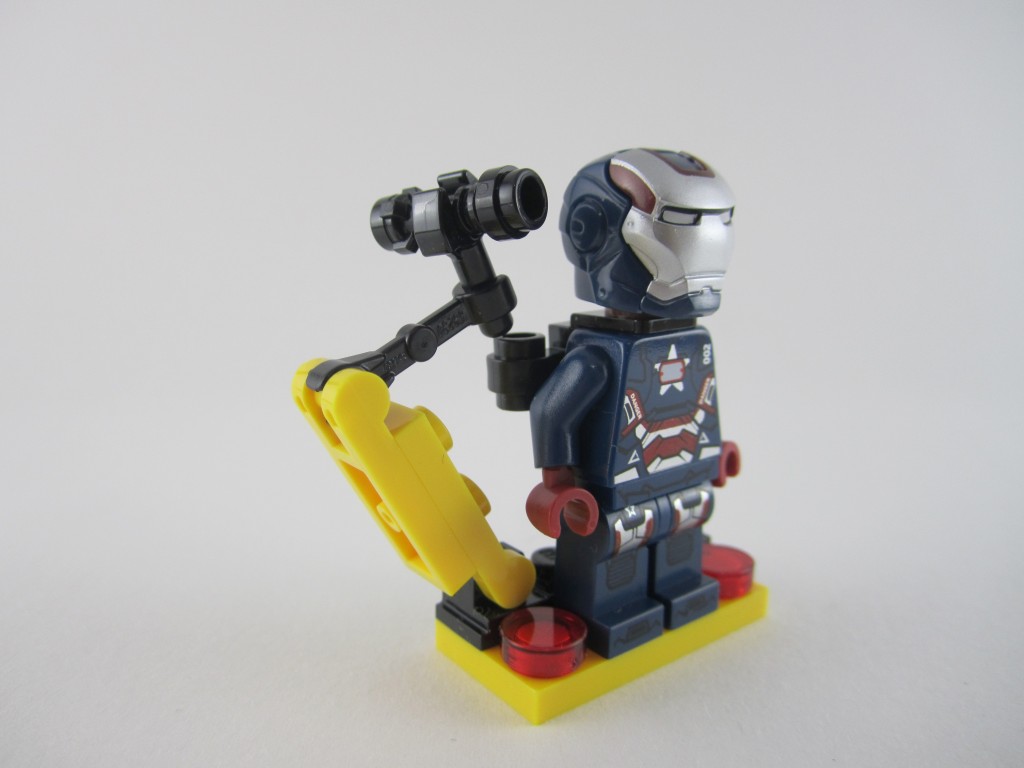 What impressed me the most about the Iron Patriot minifig is the overall high quality feel to it. Based on my previous experience with other Super Hero themed promotional polybags – I’ve always discovered that the minifigs were made of inferior plastic that left much to be desired in the quality department.

Not the Iron Patriot. It’s fully decked out and shows no sign of it being made in a Chinese factory. The legs and plastic feels solidly premium and I’m happy to report that there’s the Lego words embossed inside its legs, which is a great assurance that is indeed not made out of the same material as the Collectible Minifigures Series. Huge props to Lego for giving us a great, well designed minifig. 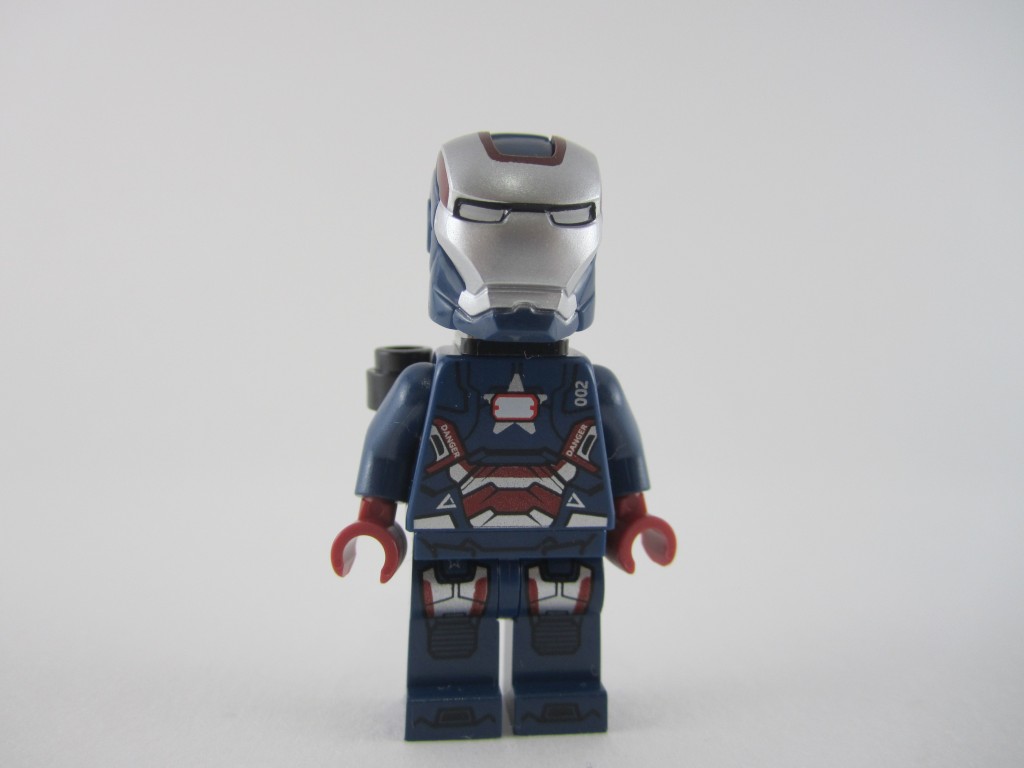 I fully expect this minifigure to skyrocket in value on the second hand market, due to its unique paint job and popularity of the character. Best snap one up now while they’re still cheap on Ebay (around $20-$35). I normally am very underwhelmed by promotional polybags but this is not one of those times. One of the best minifigs I’ve ever owned.

My only regret is that I didn’t preorder more of these at EB Games.