Welcome to Part 2 of my Series 11 Collectible Minifigures review. This is my very first post on my new domain, jaysbrickblog.com, so I hope everything goes well!

If you’d like to read Part 1 where I featured the Yeti, Welder, Saxophone Player, Constable and Holiday Elf, click here!

In the second part of my Series 11 review, I’ll be checking out the Evil Mech, Pretzel Girl, Grandma, Barbarian and Lady Robot 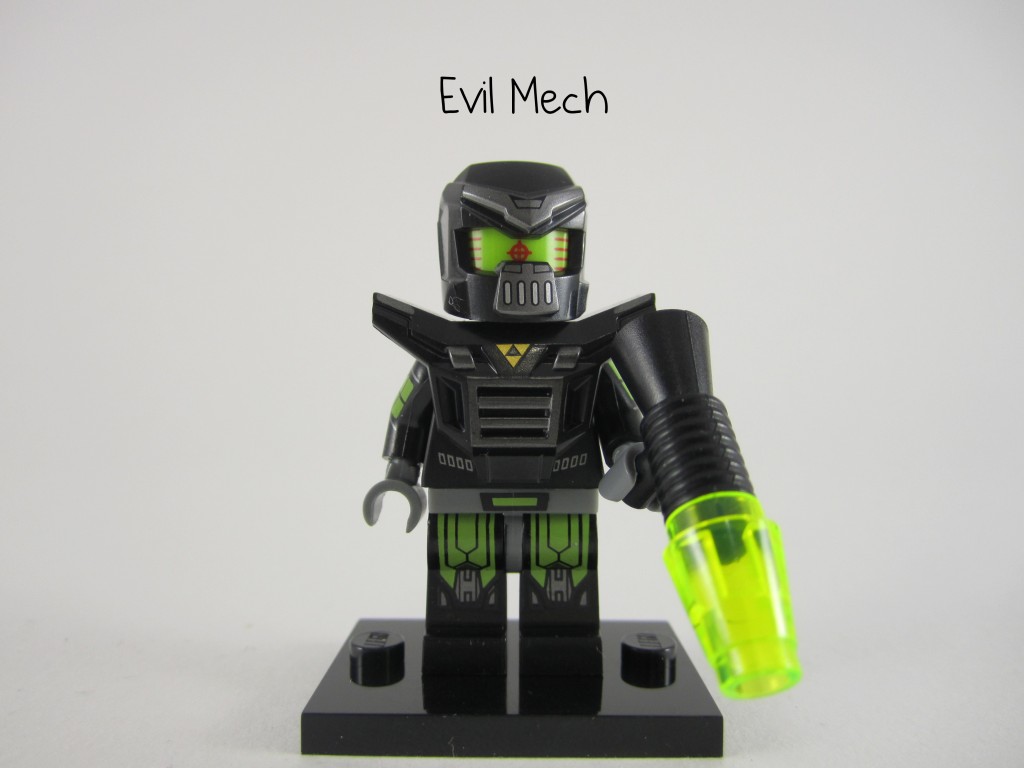 One of the minifigs from Series 11 that was spoiled early this year, the Evil Robot might look like an adversary to Series 9’s Mech, but to me, he fits in better into Lego’s Space theme as he’s clearly a Blacktron agent due to the Blacktron 1 logo on his space-armour.

I have to admit that I’m a sucker for Space-themed minifig and I’m doubly fond of classic Space sets like M-tron and Blacktron. The very subtle logo (upside down Triforce for you Nintendo enthusiasts) comes from the very first and lesser known Blacktron sets, making him a predecessor to Series 3’s Space Villain. The Evil Mech has a sleek black visorless helmet and an exquisite lime green cyborg head piece where a HUD is printed onto the head itself as a visor of sorts. He’s even got a little targeting reticule in the middle which is a neat touch.

He’s got an extremely cool Alien bounty-hunter look to him, further expanded on by his excellent body armour. Despite most of his torso being obstructed by his armour, he’s got an amazing print job on the front (no back printing, which is a shame!) and some nifty details on both his arms. I like that Lego is reintroducing more arm-printing into the collectible minifigs as I feel that it adds a lot of design depth to a minifig. His legs also have some nice lime-green accents on them. The lime green goes so so well with the black and is further accentuated by the grey and slate detailing. I feel like the black and green colour scheme is an obvious nod to Blacktron 2.

To blast his foes to oblivion, I like that Lego continued this walk down memory lane with a “megaphone” gun. Remember kids, before we had fancy custom rifles and laser guns, all we had were megaphones that you attached a cone-brick to and call it a laser gun. Excellent choice by the designers to go down this route especially with the trans-green piece, which will remind any long time Lego-fan of their childhood messing around with space-themed sets.

How To Find One: His armour is quite large and easy to feel due to its chunky size. You can also try looking for the megaphone piece to confirm that you have the Evil Robot.

Pretzel Girl“Who needs a phone when you can yodel?” 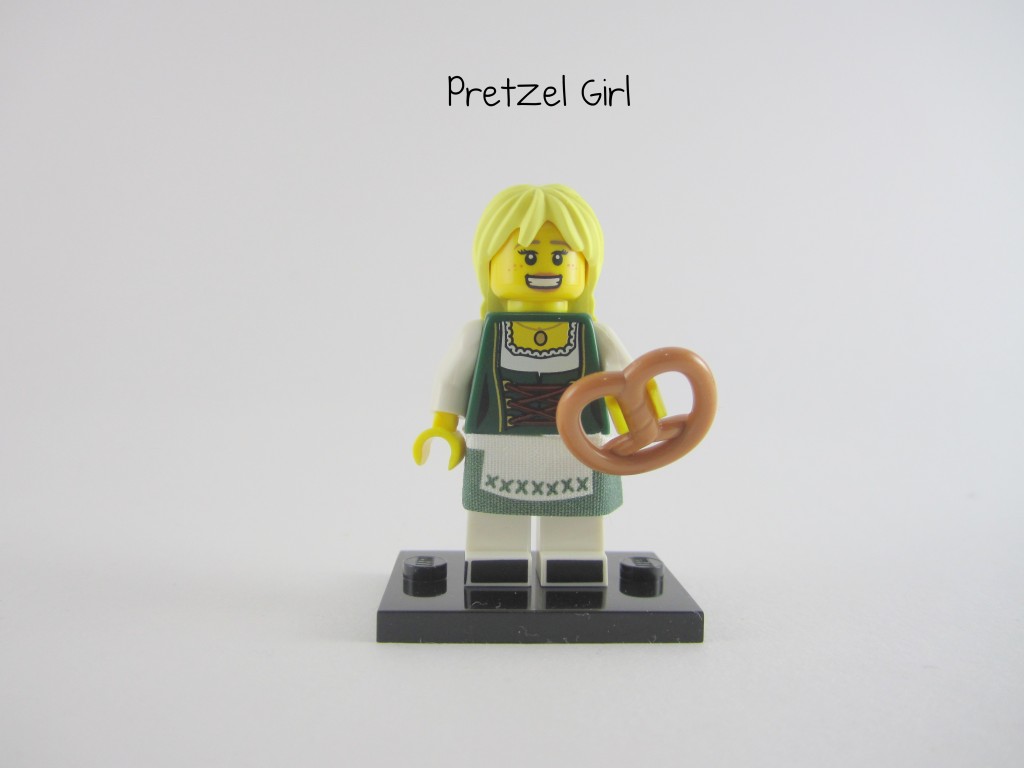 Series 11 seems to be filled with opposite sex partners of previously released minifigs, more so with the Pretzel Girl, who is obviously romantically linked to Series 8’s Lederhosen Guy. Aptly named because she’s a female minifig holding a pretzel, the Pretzel Girl is pretty cute and has some several great parts such as the pretzel and her hairpiece, which is a fantastic twin-braided blonde piece with some bangs in the front. Unfortunately, her hairpiece is made out of squishy rubber instead of normal ABS plastic but it doesn’t look too bad when you put it on her. In fact I have to say that it looks pretty neat and is one of the nicer female hairpieces I’ve seen in awhile.

My favourite thing about her would be her face painting. She’s got a huge grin because she obviously has the best job in the world, selling pretzels in some quaint Bavarian village. I really like the freckles that she has under her eyes, which in my opinion makes her one of the cutest minifigs I’ve seen in awhile. 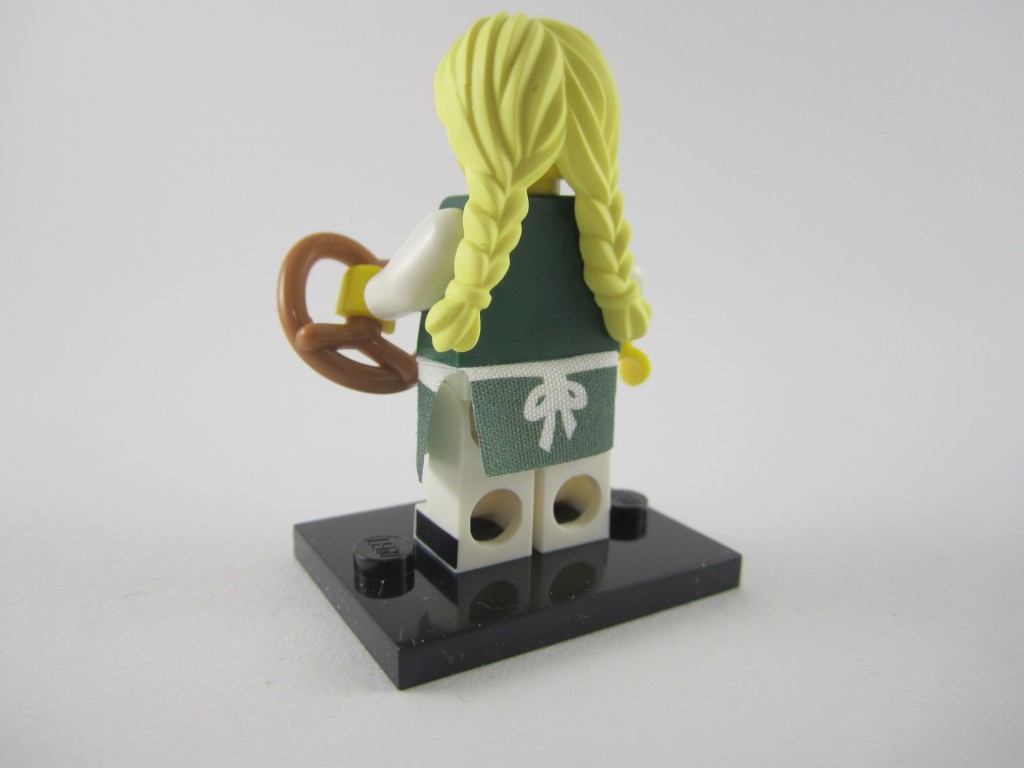 She wears white pants with what I’m guessing are black shoes at her feet? It’s a little unclear since it’s just a black painted box on both legs, with painting that goes round the sides as well.

EDIT: So… I totally messed up and accidentally threw out the Pretzel Girl’s apron. I probably wasn’t paying too much attention and didn’t realize one of my readers alerted me about it. I had to go out to buy another Pretzel Girl since I threw the skirt out (probably still left in the packaging). The apron price is fantastic, with a patterned front and a little bow to tie it all together at the back. Definitely makes the minifig look more balanced and adds a lot to the entire package. Due to this discovery, I’ve raised the rating by one point!

My only complaint is that she has no back painting which is a little disappointing since she’s outfitted in a traditional German bodice which looks fantastic from the front. Back printing would’ve made her a lot more desirable and quite possibly a must-buy. Nevertheless, we now have a bar wench type minifigure, which is awesome for medieval Lego enthusiasts!

How To Find One: Her hair is quite easy to spot since it forks into 2 and you can tell really easily because it’s made of squishy rubber. You can also try finding the pretzel since it’s quite large, flat and holey. 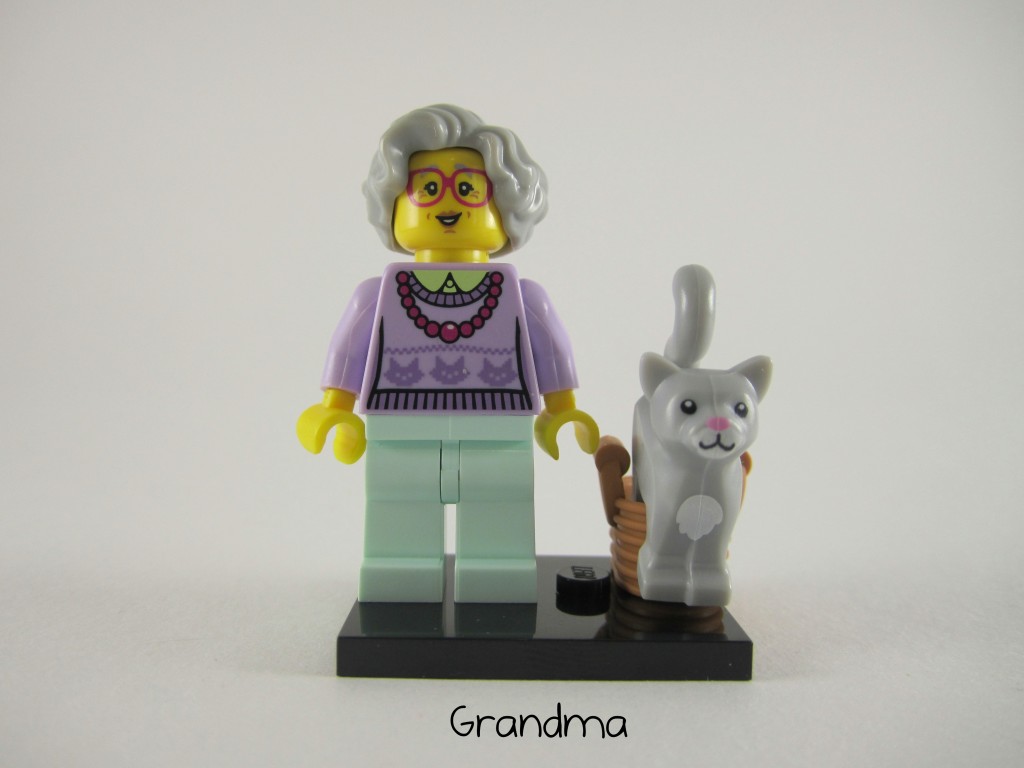 I like that Lego politely chose to call this minifig Grandma when everyone knows that she’s a crazy cat lady! The Grandma is quite possibly the sleeper hit of Series 11. I love that Lego has given us 2 elderly minifigs in back to back Series (Grandpa can be found in Series 10). The Crazy Cat Lady has a very neat, very elaborate new hairpiece in grey. For an elderly lady, she’s quite the style icon with her fancy haircut. She has an adorable purple sweater that’s adorned with little cat faces on the bottom. One of the cutest torsos that Lego has ever produced. She has mint-green pants which go exceedingly well with her purple sweater and has a basket to carry her little kitty in. 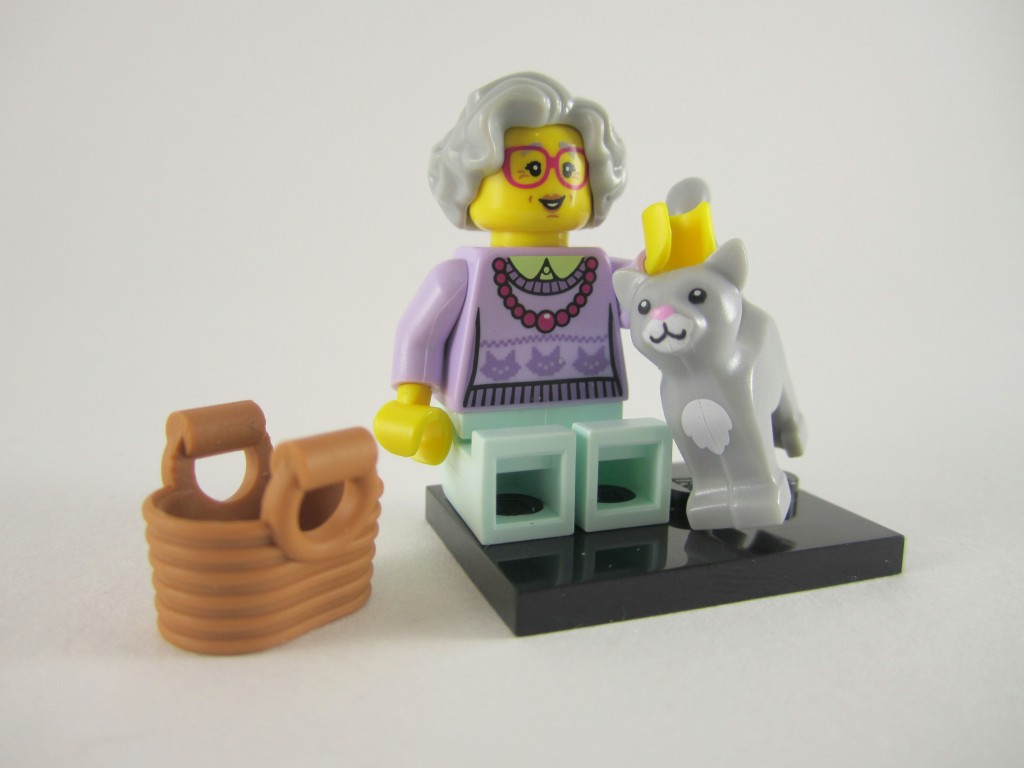 The whole package works entirely well together. It would’ve been perfect if she had some back printing as she looks quite bare from behind, but hey, still a winner of a minifig. Definitely buy her if you have a Grandpa in case he gets lonely!

How To Find One: Try feeling for the basket which not only has a distinct shape but is quite squishy. While feeling around, you can pinch the basket as its got a very spongy feel to it. You can also try feeling for the cat but be careful not to confuse the kitten with the Holiday Elf’s bear.

Barbarian “Don’t get in my way!” 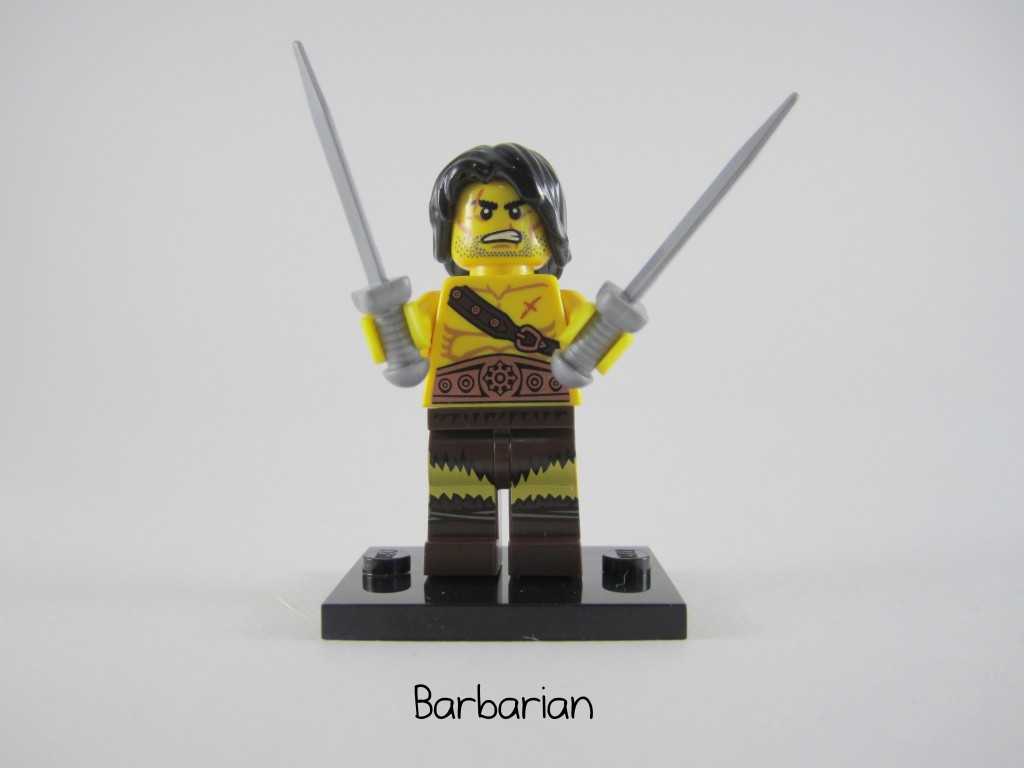 The Barbarian will probably win some sort of award for being the most generic, repeated and bland minifig in Series 11. There to fill the quota of the “rough, warrior-like minifig with a sword” that seems to be present in every series but hasn’t wowed anyone since Series 5’s Gladiator simply because it’s just plain boring.

I’ll try to not be too negative about the Barbarian and dip up some kudos, but it’s going to be a mammoth task. Firstly, his hear is the generic Dastan-hairpiece that’s all too common amongst warrior-type minifigs. At least he has a decent face is you’re looking for a fierce-battle hardened type of look with scars and stubble. Might come in handy if I’m building some Game of Thrones characters and scenes.

His torso and legs are fairly generic as these ‘gladiator-type’ minifigs go. He has a band that stretches over one of his shoulders and a fairly large “WWE champion”-ish belt that’s painted bronze along with a furry loincloth and fur boots. He has some back printing which is a nice touch, but perhaps the best detail the Barbarian has is his cuff printing on both hands. He has an armoured bronze wristpiece on his left hand and a leather strappy thing on his right. He dual wields 2 regular gladius swords which aren’t too flashy or exciting. Please Lego, if you’re giving us Series 12, retire the warrior/gladiator slot or give us something a little more exciting like a Fighter with a Tiger/Bull mask.

How To Find One: Look for his swords. He has two and they’re the only swords in this set, which shouldn’t be too hard to feel. 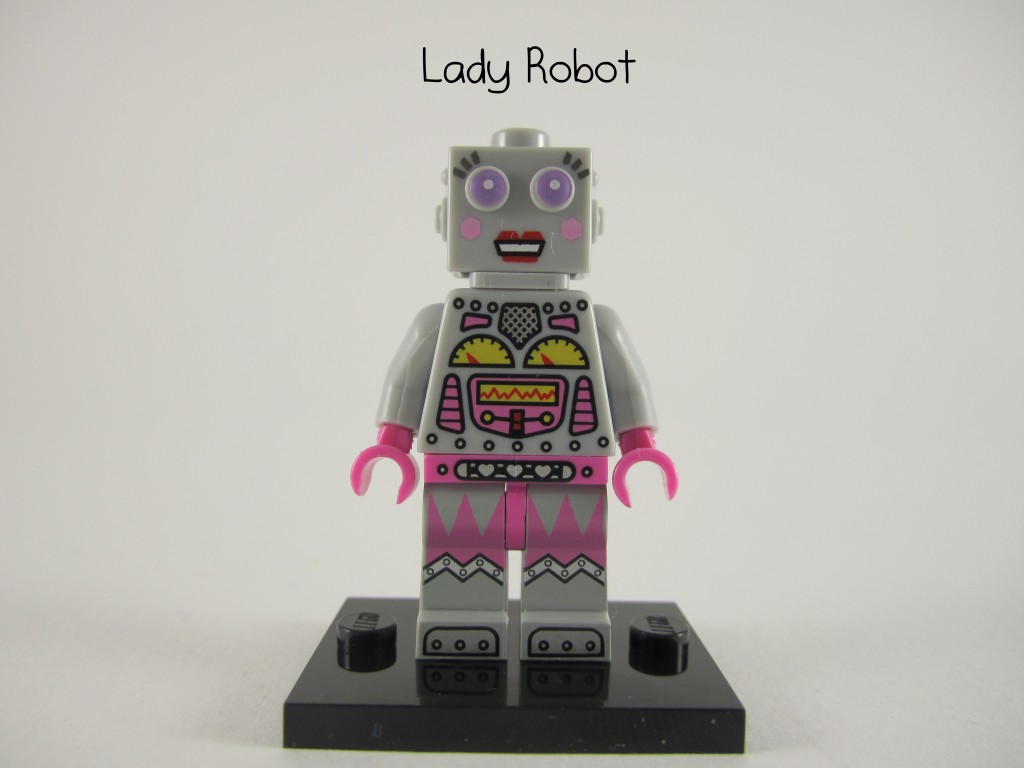 One of my favourite minifigs ever, Series 6’s Robot finally has a life companion in the form of our very first Female Robot! The wait for a romantic partner for Series 6’s robot was quite awhile but as always, it’s better to be late than never.

The Female Robot sports all the trademark rules of being a “feminine” toy, namely she’s covered in pink accents all over. She retains many of the nice little details of Series 6’s robot trademark look, including the little wind-up mechanism on the minifig’s back, attached via a neck accessory. Feminine features include eyelashes, blushing cheeks, lipstick and the strangest bit of all, 2 symmetrical “meters” on her chest, which I can only guess are meant to represent breasts. To me, the breasts are a questionable design choice as the robot already looks plenty female with the pink accents. Some other finer details include a heart-designed belt right above her legs. 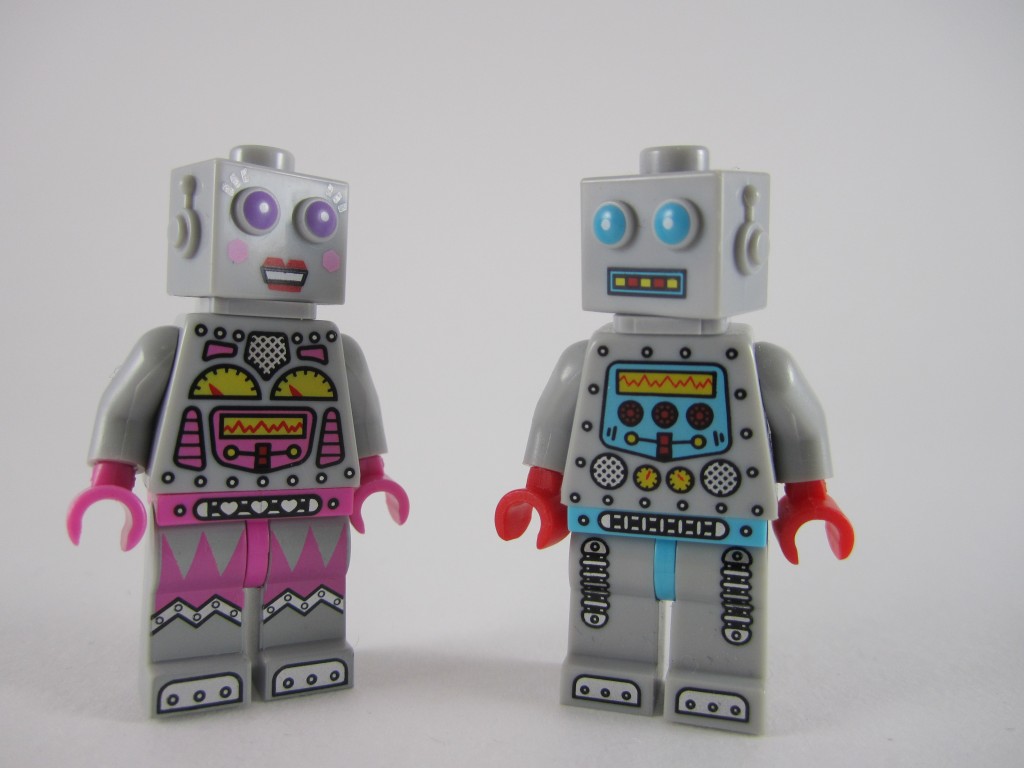 Overall, it’s basically a reskinned version of Series 6’s adorable robot. It’s nothing groundbreaking and the colour mix seems a little dull even with the pink accents. I’d have liked it a lot more if they went with a more pastel colour scheme and incorporated some other colours like they did with Series 6’s light blue, bright red and grey.

How To Find One: The Female Robot’s head is quite distinct thanks to its squarish shape. You can also try to feel out the neck accessory which is an L-shaped piece but it’s kinda small so it might be a little tricky to pick out.

And that’s all for now! I’ve kept the very best minifigs in Series 11 for last so be sure to stay tuned for Part 3!