Sorry for not updating the blog in a while! Work has been extremely busy for me and I was in Sydney for a short holiday last weekend. I also lost tons of sleep from watching World Cup games but now that the world’s biggest football competition is out of the way, I finally have more time to myself and the blog! 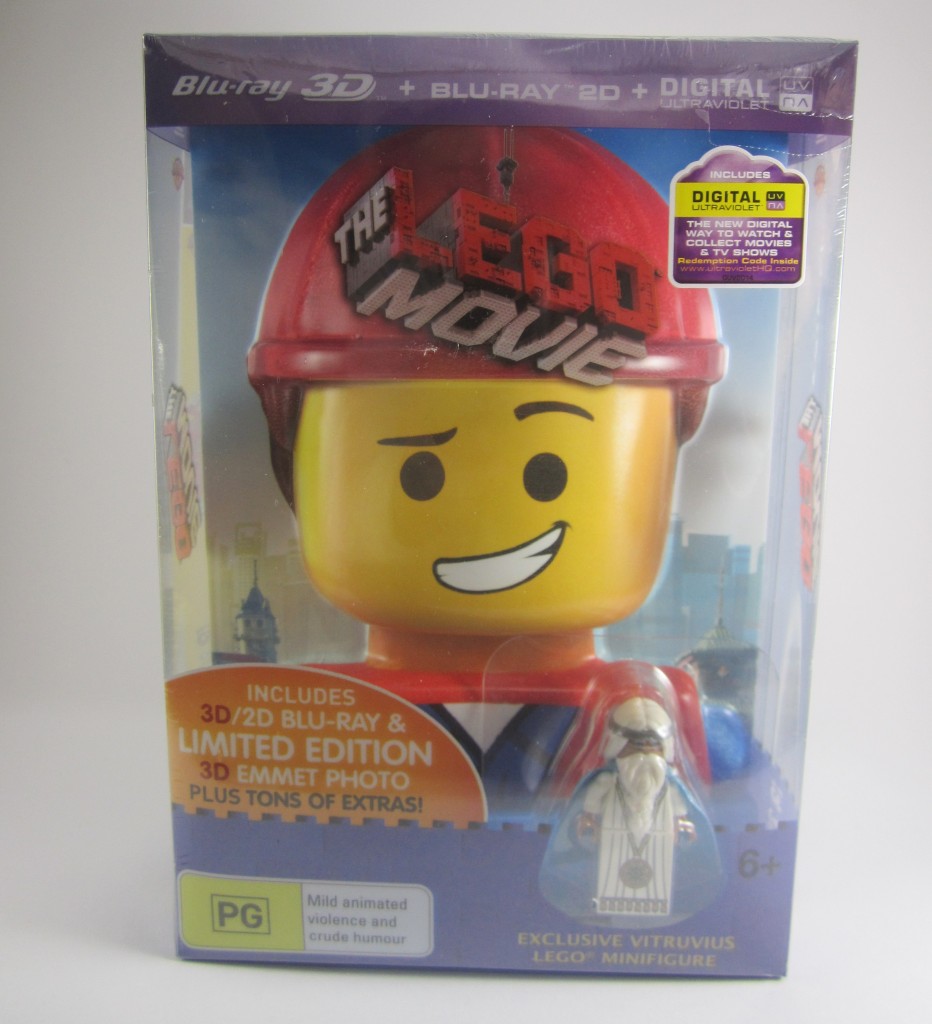 Here’s one of my more recent purchases, the 3D Blu-Ray edition of The LEGO Movie, which was released here in Australia almost 2 weeks ago. It was quite evident why I opted for this version and I’m assuming most LEGO fans would’ve done the same – I really wanted the exclusive Vitruvius minifigure!

I picked my copy up from my local Sanity as there weren’t any JB Hi-Fis out where I live. The 3D Blu-Ray edition was priced at $29.99 which is not too steep since you get a 3D version as well as the Blu-Ray. I initially planned to do a full review of the Blu-Ray version and the extra features such as the Outtakes and Commentary but when I got home, I suddenly remembered that I didn’t have a Blu-Ray player. Yup. Not very clever from my end!

It was kind of a bummer as I was really looking forward to checking out the special features so this review is going to mostly be about the contents of the 3D Blu-Ray edition, as well as a more in depth look at the Young Vitruvius minifig. 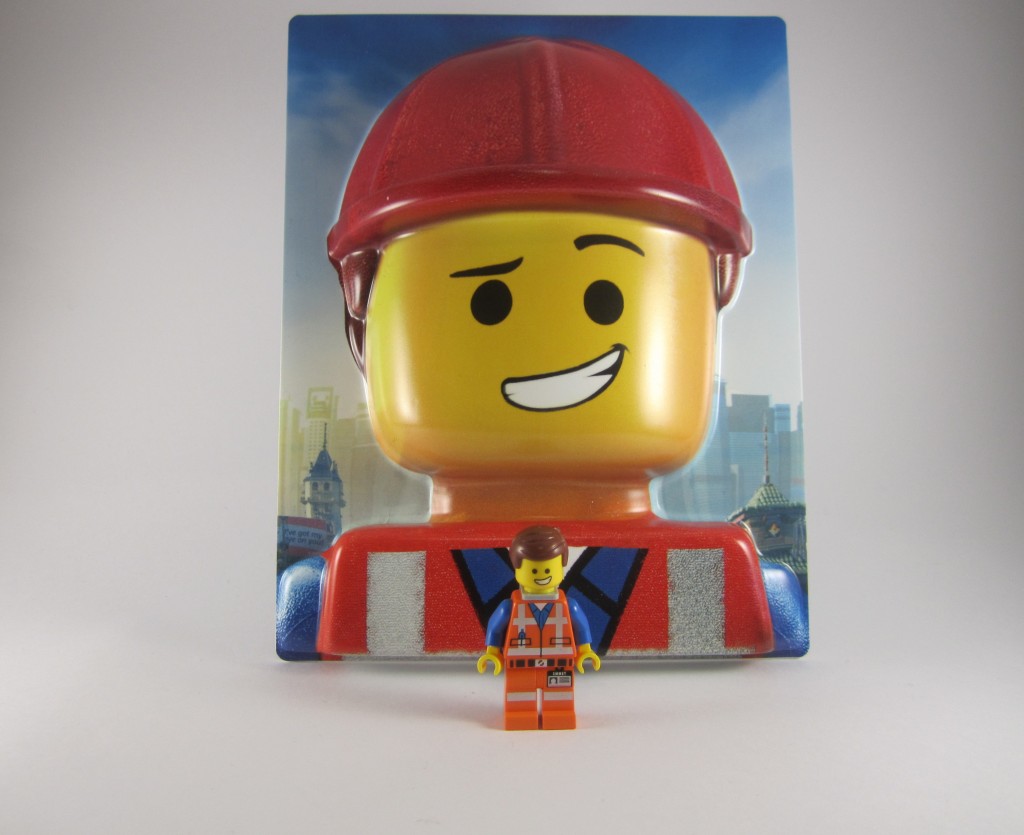 This is one of the cool extras included in the 3D Bluray edition of The LEGO Movie, a 3D Photo of Emmet. Minifigure Emmet for scale. 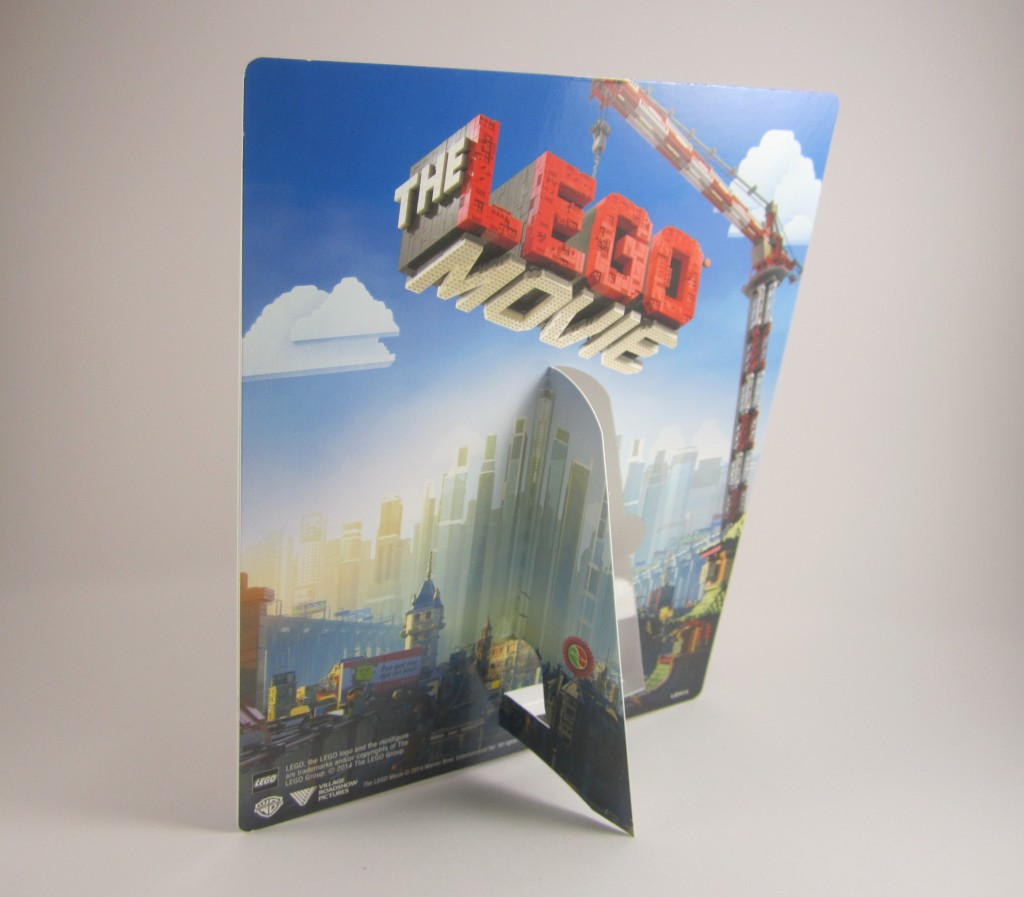 At the back, there’s a little stand that folds out which allows the photo to stand upright and would be a pretty cool piece of decoration for desks or on the mantelpiece, next to your other LEGO sets. 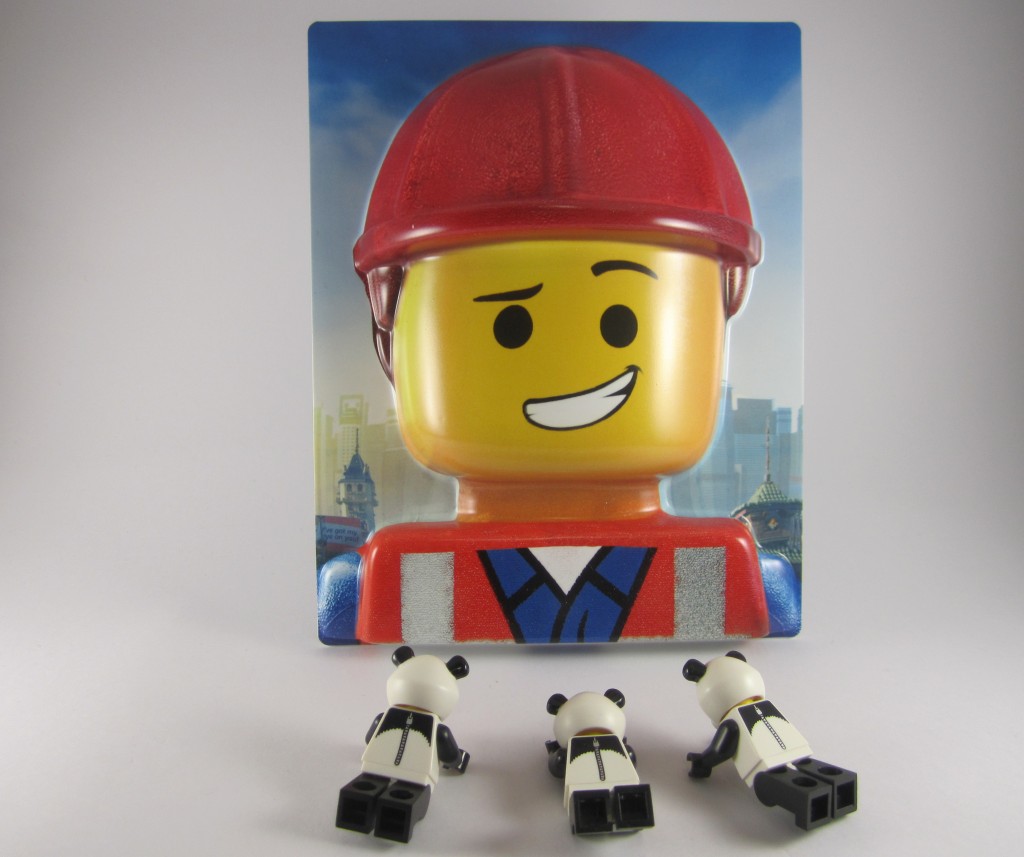 If you were inclined, you could also use it to start a cult for your minifigures to worship. Pictured above are the Panda Suit guys, bowing in reverence to their deity, Emmet Brickowski. It’s a pretty interesting novelty from the movie and it would’ve been so cool if the 3D photo could actually be compatible with LEGO, such as having some studs at the base or back.

Anyway, incorporating the 3D photo into your own LEGO city shouldn’t be too difficult, so you could go ahead with your plans to build an Emmet shrine fairly easily. 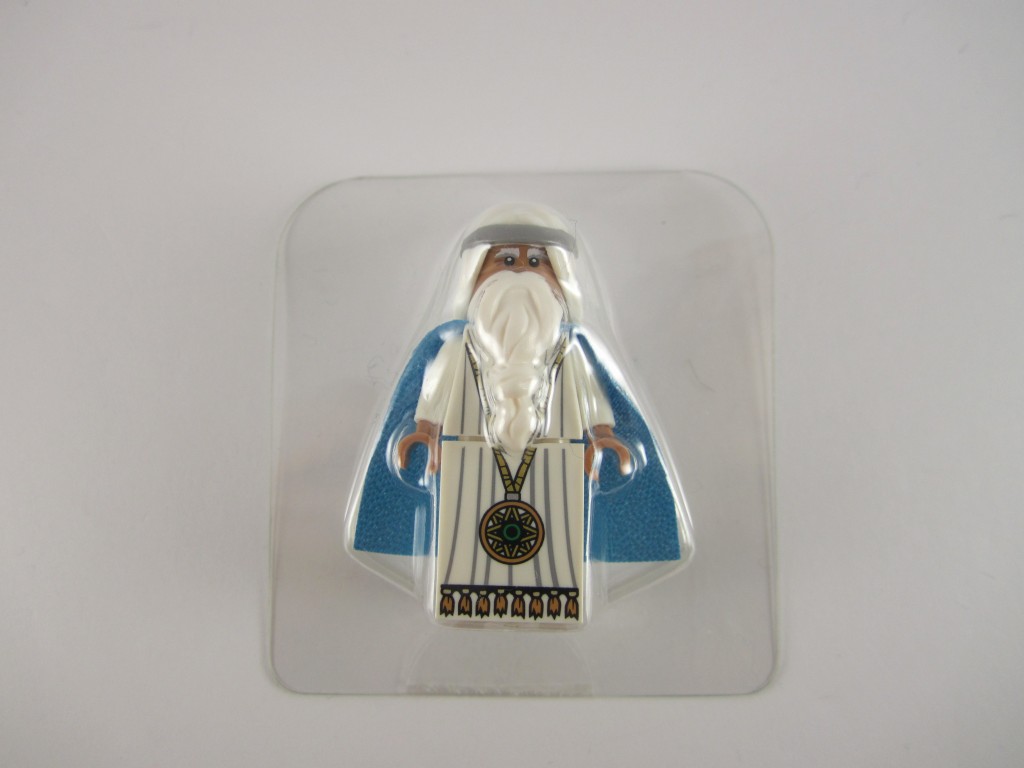 On to the main draw of the 3D Blu-Ray edition, the Young Vitruvius minifigure. He comes in a neat piece of plastic packaging which can be used to transport other minifigures once you’ve freed Vitruvius from his plastic prison. 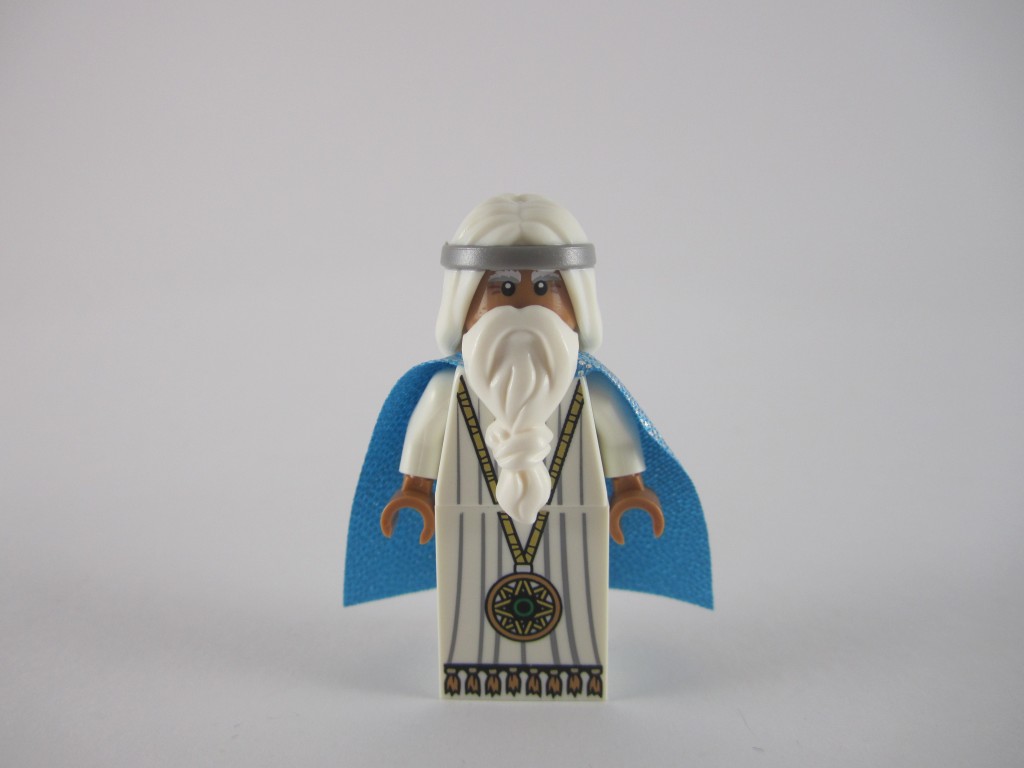 You may remember Young Vitruvius, from the opening scene of The LEGO Movie where he was blinded by Lord Business, at which point his eyes lit up and he uttered the prophecy which led to Emmet finding the Piece of Resistance and all the other wacky events that later unfolded in the movie.

This is an alternate version of Vitruvius, which can be found in 70809 Lord Business’ Evil Lair and 70810 MetalBeard’s Sea Cow. 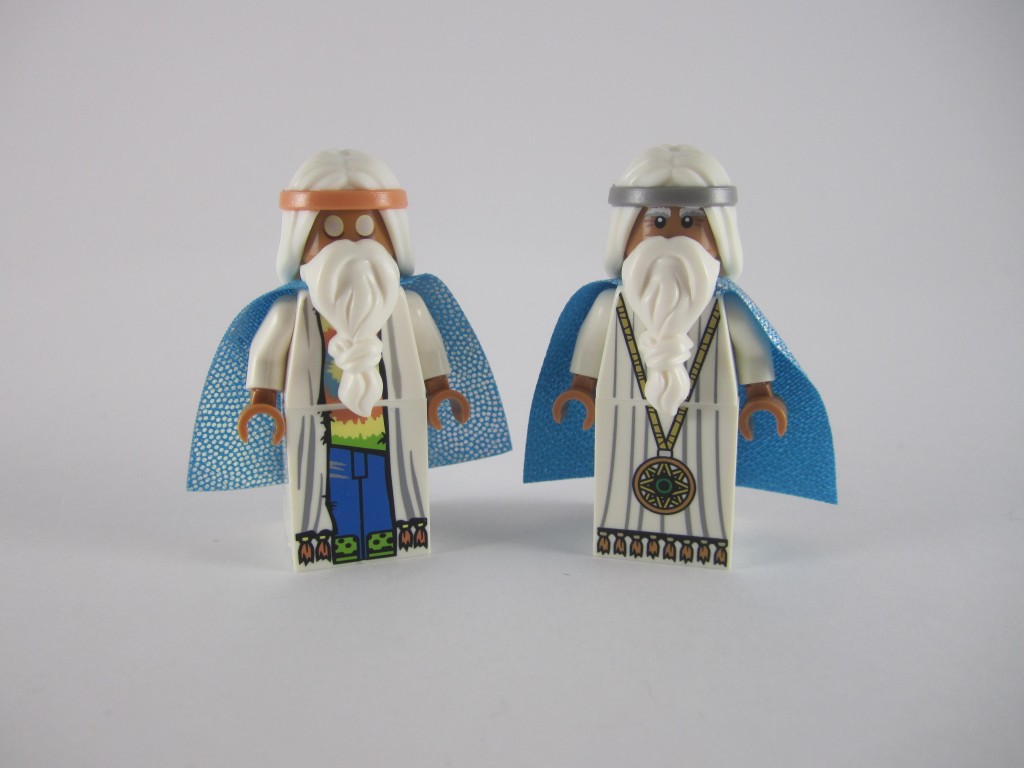 Wonder how they differ? Here’s a comparison shot of Old and Young Vitruvius. Young Vitruvius still has his eyes, which are deep and soulful, flanked by greying eyebrows as well as a grey coloured hippie headband. His older counterpart has white, glazed blinded eyes and an orange headband.

Young Vitruvius also has a more sagely appearance thanks to him not looking like a dirty 70s flower power hippie wearing a bath robe, but more like a wise prophet complete with a huge magical medallion. Both Vitruviuses (Vitruvi? I don’t know the plural word for Vitruvius) have their sexy sparkly polka dotted cape, which is one of the coolest capes ever produced by LEGO. 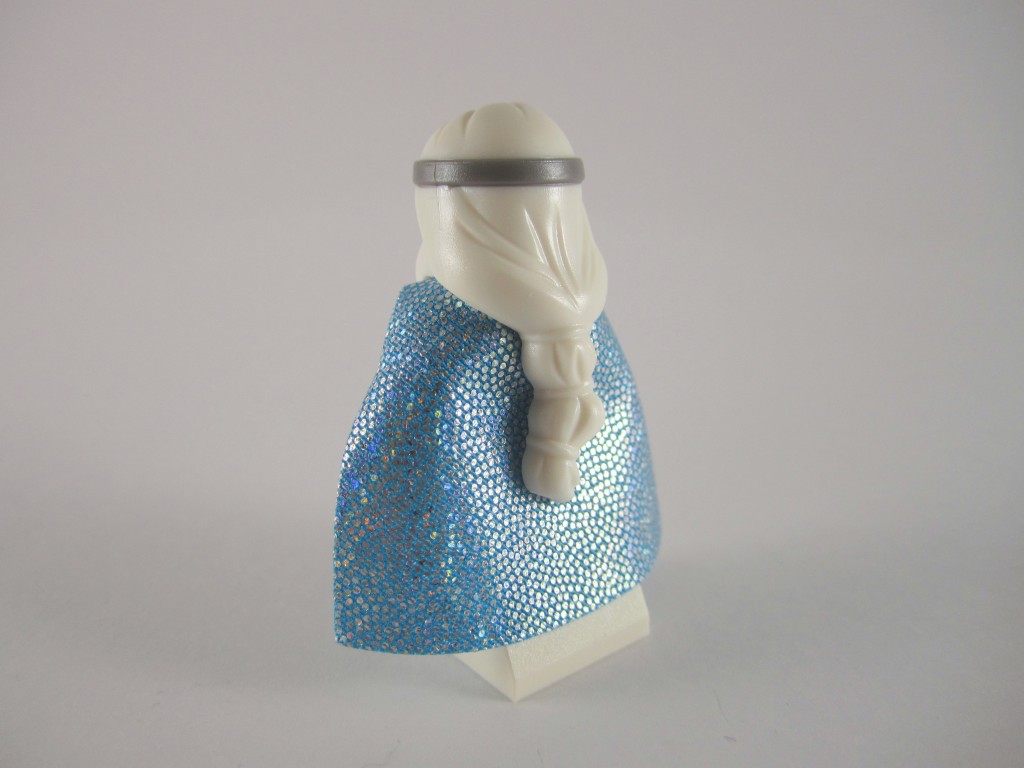 The cape doesn’t feel like regular cloth capes thanks to the extra layer that they use to coat it with a layer of shimmery polka dots. 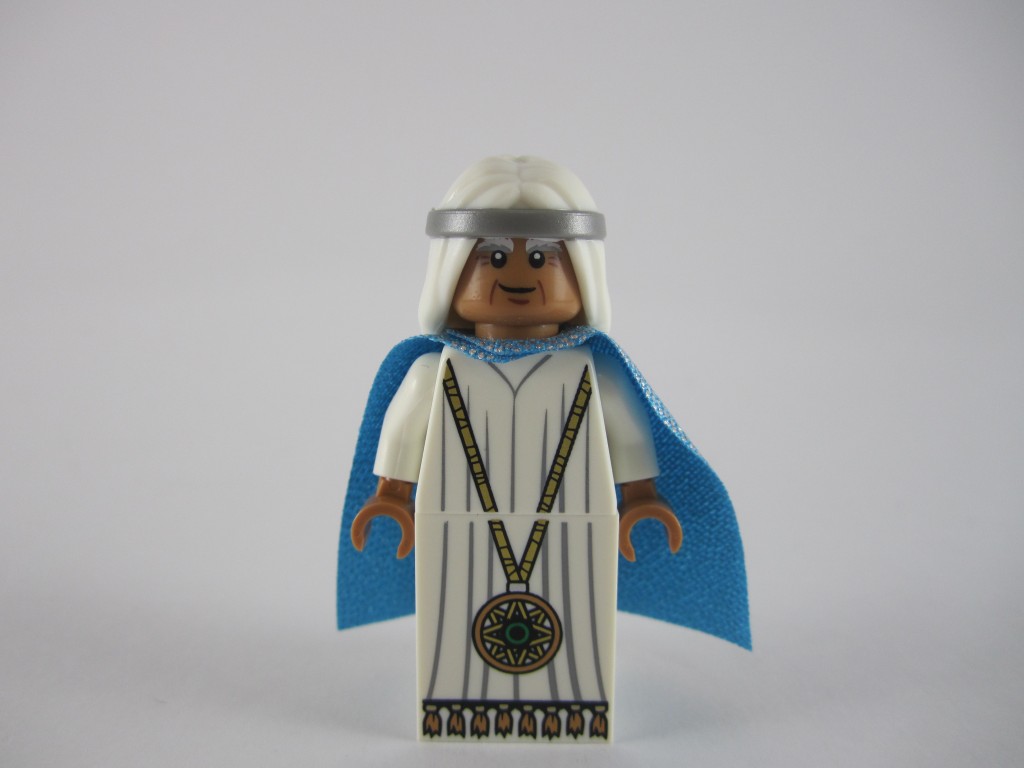 Ever wondered what Vitruvius would look like if he shaved? Wonder no more! He only has a one sided face, but that’s fine seeing as how dark skinned minifigures are rare, and I’m not sure if there are even any other tan, elderly looking minifigure heads, so this is a welcome addition to my ever growing collection of minifigure parts.

I’m also a big fan of his hairpiece, as it allows him to give off a very mystical leader vibe. His hairpiece is wonderfully moulded and could also work very well on a female minifigure. 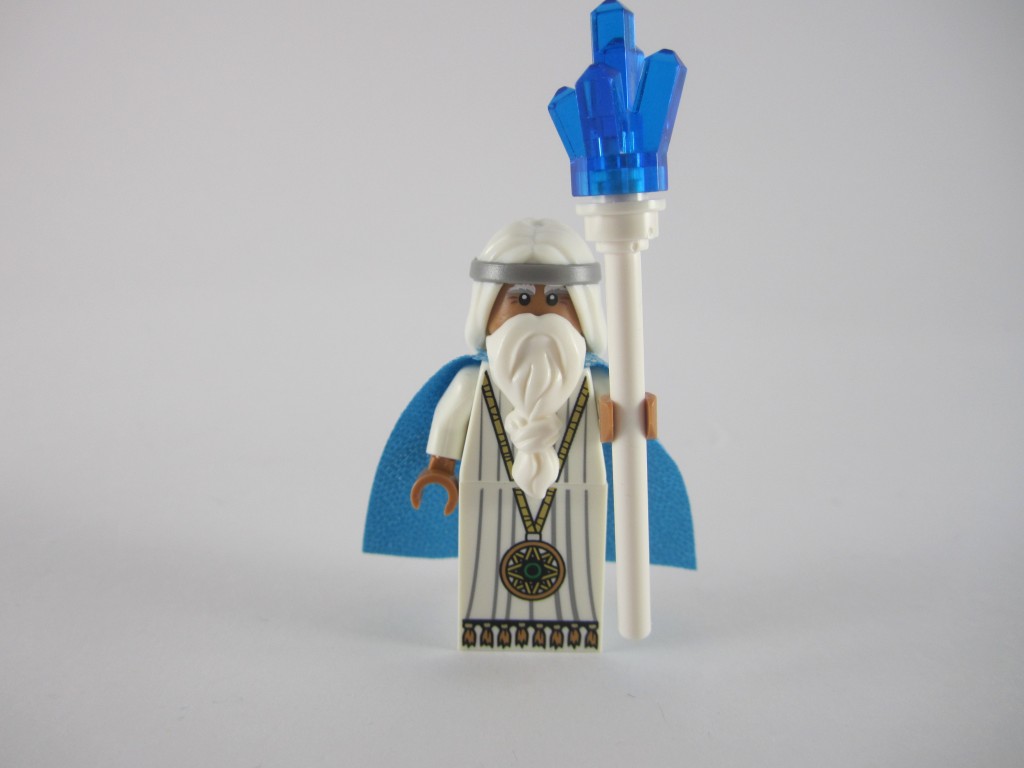 My only complaint is that Young Vitruvius didn’t come with any accessories. I understand that it may be difficult packing in additional parts, but how cool would it have been to have his staff included with the minifigure. In the image above, I fashioned his staff (before he replaced it with a chewed up candy one) out of his staff from Lord Business’ Evil Lair Had and a blue crystal from Power Miners.

Holding the staff, which features quite prominently at the start of The LEGO Movie makes it feel so much more complete.

Final Thoughts: I can’t say much about the 3D Blu-Ray specific bonuses such as the Special Features and Commentary since I haven’t been able to experience those, but for 30 bucks, this is pretty good value, especially with the exclusive Vitruvius minifigure. The popularity of his character should mean that this alternate version of Vitruvius will be highly coveted by LEGO fans, especially those who would want to collect very minifig from the movie. I highly recommend picking this one up, as it feels really nice to own a physical non-pirated version of The LEGO Movie as well as the exclusive Vitruvius minifigure.

The 3D Blu-Ray version of The LEGO Movie with Vitruvius minifigure is available at Sanity or JB Hi-Fi in Australia. It’s a limited edition version, so I’m not too sure if stock is still available, but if you were to ask a sales assistant at either store, I’m sure they can order it from their system or point you to stores that still have stock.

Alternatively, you can buy the Everything is Awesome Edition of The LEGO Movie from Amazon, which ships to Australia. You get the Vitruvius minifigure as well as a 3D Blu-Ray, regular Blu-Ray, DVD version and the Ultraviolet digital download. In hindsight, I should’ve bought this since it contained an actual DVD version, but hey, I’m still very glad to help out my local Sanity store here in Warragul.

Did you pick up The LEGO Movie DVD? Let me know in the comments if you liked it and enjoyed the special features!