I’ve been on holiday over the last 3 weeks and I managed to catch The LEGO Ninjago Movie in the cinema. Ever since my kid came along, it’s been an absolute challenge getting away for 2 hours to watch movies (you parents know what I’m talking about) so I had to sneak out with a friend after the missus and baby fell asleep to catch a midnight screening.

As the movie’s been out for about one and a half weeks now, I’ll start off by saying that this review will absolutely contain major spoilers so if you haven’t seen the LEGO Ninjago Movie yet and want to remain unspoiled, please stop reading now.

I will also preface this review with my expectations of the movie, to give you a better understanding of my frame of mind walking into the cinema. I was really looking forward to The LEGO Ninjago Movie. From the get-go, the premise of the movie was really promising.

I like the Ninjago theme and think that it’s rather underrated amongst adult LEGO fans.

I am a big fan of the cast – the comedic pedigree of Jackie Chan, Dave Franco, Michael Pena, Kumail Nanjiani, Zach Woods and Fred Armisen, not to mention Constance Wu and Randall Park (from Fresh Off the Boat) seemed like an awesome ensemble of some of the best current-day comedians in Hollywood.

I am a big fan of HBO’s Silicon Valley so I was psyched to be hearing more of Zach Woods and Kumail Nanjiani.

I was also coming off of the slightly disappointing affair of The LEGO Batman Movie. Don’t get me wrong, I liked the movie but it didn’t quite soar to the same heights as the first LEGO Movie which was such a refreshing and exceptional experience at the time, loved by both fans and critics alike.

With The LEGO Batman Movie, I really enjoyed the campy and comprehensive take on Batman, and all the DC in-jokes thrown in but I felt that it was a little too self-indulgent and one-dimensional. It was hilarious, don’t get me wrong, but it lacked a bit of that zaniness and creativity that The LEGO Movie was exceedingly generous with.

The plot of The LEGO Ninjago Movie simultaneously treads familiar ground while throwing in a few twists to keep it fresh. The story revolves around Lloyd (pronounced Luh-Loyd) the Green Ninja and his struggles being loved by the inhabitants of Ninjago City as the bad-ass Green Ninja, while being vilified for being the son of Garmadon.

Ninjago City is a bustling metropolis that’s both futuristic and traditional at the same time, with the obvious Oriental/Japanese influence that you’d expect from the Ninjago theme. The City is constantly under threat from Lord Garmadon who lives just a stone’s throw away from the city in a Volcano in the middle of the sea and his army of deep sea-themed henchmen and shark machinations.

We also explore Lloyd’s sordid relationship with his absent father (Lord Garmadon) and his struggles growing up without a father figure in his life. Daddy issues abound in the movie and got a little old after awhile.

It’s a bit of a shame that the movie really revolves around Lloyd and Garmadon, which unfortunately relegates the rest of the cast into the background, even Sensei Wu. It almost feels like the rest of the cast’s talent is wasted, outside of say Zane and his robotic quips or a few choice lines from Jay.

Kai is almost silent throughout and it just felt like there was a ton of wasted potential for the “squad” and their chemistry to truly shine.

In terms of what the movie does really well, I was blown away by the animation and the rich tapestry of world-building that went into bringing Ninjago to life. The designers and animators have done an exceptional job fleshing out the universe. Ninjago City and its denizens feel organic and are bursting with life and character.

The movie moves at a pretty fast pace which makes it a little hard keeping track of everything that goes on, but I loved all the little peeks at Ninjago City life as the inhabitants react in disgust to Lloyd, or panicking over Garmadon’s latest takeover attempt of the City. In many ways, the Ninjago universe mirrors the colourful cast and universe of The LEGO Movie, just with a ton of Japanese flavour sprinkled on it.

The movie really hits its stride in the first and second acts, where the action is fast and unrelenting. My absolute favourite parts of the movie were the Ninjas hopping into action, saving the City from Garmadon and his henchmen. The mechs are stunning, a lot of fun and felt like a love letter to Voltron, Power Rangers and Gundam.

The mech designs are brilliant and seeing them go to town with their weaponry amidst the crumbling bricks of Ninjago City is simply breathless – the set pieces and battle cinematography is second to none and is one of the few moments in the film where we can see the Ninjas coordinating with one another to take down a common foe.

To say that it’s a lot of fun is an understatement. These city fight scenes against Garmadon’s forces are among one of the most fun and exhilarating moments in any LEGO Movie. 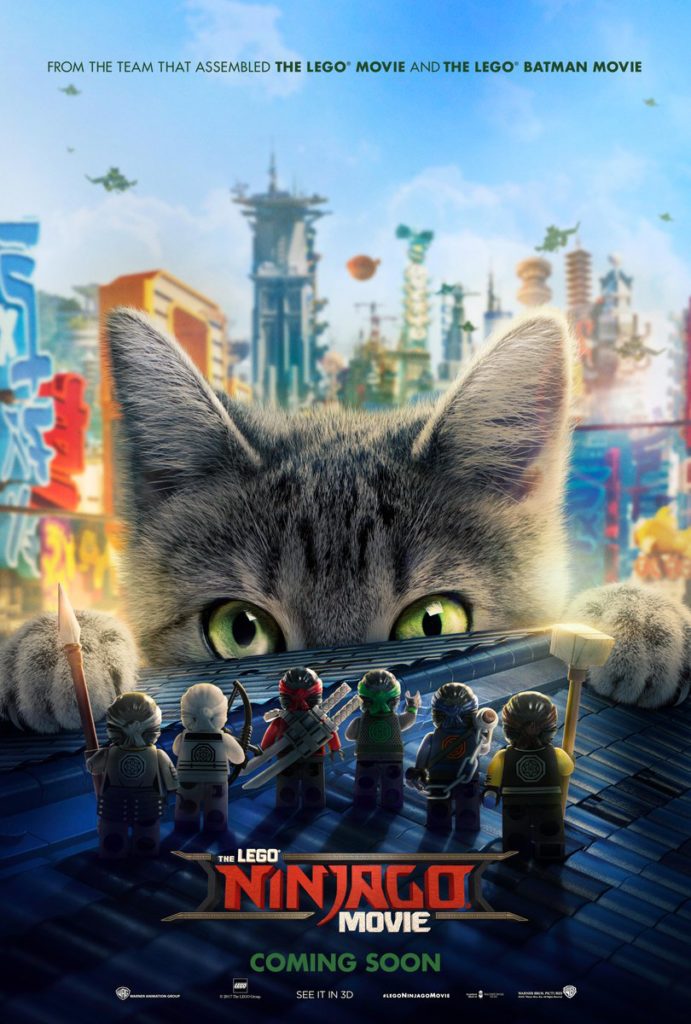 Unfortunately, I didn’t find the movie very funny. The jokes seemed to fall flat and it seemed like most of the best jokes were spoiled in the trailers.

Yeah, I could’ve avoided most of the trailers but I felt like it was a really bad decision to spoil “Meowthra” the real life cat that terrorises Ninjago City in both the trailers and posters. If they had kept this reveal for the movie, I think it would’ve been hilarious.

Also, I would’ve liked a bit more physical Jackie Chan humour, especially with the kung fu choreography. The fights that were in the movie were great and showed a lot of promise, but I really wanted a lot more. I think physical humour and gags were severely underused in the movie, as great physical humour has the potential to transcend not just language but age barriers as well.

Sadly, the movie loses a lot of steam as it approaches the third act, where the progression of the plot and characters suddenly accelerate into a jumbled and incoherent mess. This is where Lloyd and Garmadon start teaming up, and outside of some poignant/funny moments like Garmadon teaching Lloyd how to throw stuff, the movie seems to rush itself to the finish line in a very haphazard fashion.

It doesn’t help that the emotional climax happens in the third act, but I felt that it wasn’t properly built up properly throughout the first two acts.

The movie sends out some strong messages about absentee fathers, but because the plot progresses too rapidly, it doesn’t give you enough space to relate or to form a bond with the characters that it doesn’t quite feel like there’s a lot at stake with Lloyd and Garmadon’s relationship.

And this is ultimately where the movie falls short for me. While it is an absolute cinematic spectacle with some amazing set pieces, animation and art direction, the movie lacks the heart that was unashamedly the essence of The LEGO Movie, and to a weaker extent, The LEGO Batman Movie.

I can forgive the movie’s slightly underwhelming sense of humour and credit that to it being targeted at younger kids, but that’s no excuse for a movie to feel so empty.

Pixar is considered a legendary animated feature film production house not because of their creativity, art style, or technology but because their most successful movies like Up, Toy Story and Wall-E rightfully place an emotional connection at the forefront of the movies and build around it.

The LEGO Movie had plenty of heart, and you couldn’t help but relate with all the protagonists, Wyldstyle, Emmet and President Business because they were written well and came across as three dimensional characters who developed throughout the movie.

I didn’t quite get that from Lloyd and Garmadon’s dynamic. I thought Lloyd, voiced by Dave Franco was brilliant, but Garmadon’s writing and voice acting left a lot to be desired. He just felt like an underdeveloped character and outside of his backstory with Lady Iron Dragon/Misako, it didn’t feel like he grew much throughout the movie.

Also while we’re at Garmadon, what is with the dark undertones of all three LEGO Movies and shitty dads/father figures? Surely there are other stories that can be told that don’t revolve around estranged fathers?

It sadly doesn’t reach the heights of The LEGO Movie but like The LEGO Batman Movie, is still worth a trip to the cinemas to watch it. It’s a really enjoyable romp and showcases some really epic action scenes and if you’re into mecha this movie will hit all the right notes for you. Just don’t expect a fully satisfying cinematic experience like The LEGO Movie delivered.

There were a few other smaller gripes that I had, such as the lack of Spinjitzu which was really surprising as its such a core component of the Ninjago theme and TV shows but they didn’t ultimately detract from my overall enjoyment of the movie.

One of the things the movie does well is that it remains approachable and easy enough for anyone to get into. You don’t need to know anything about Ninjago or any backstory of the TV show or sets to get into the movie, which I thought was a really smart thing to ensure that the movie remains accessible.

Is it a perfect movie? No, but it makes for a good family popcorn flick for those that love LEGO. Could it have been improved? Most definitely!
Rating: 3/5

So yeah, that’s my thoughts on The LEGO Ninjago Movie. I’d love to hear what you thought of the movie in the comments section! Did you love it or hate it? What were your favourite parts?