The LEGO Movie will be officially released Australian cinemas on Thursday, 3 April 2014. 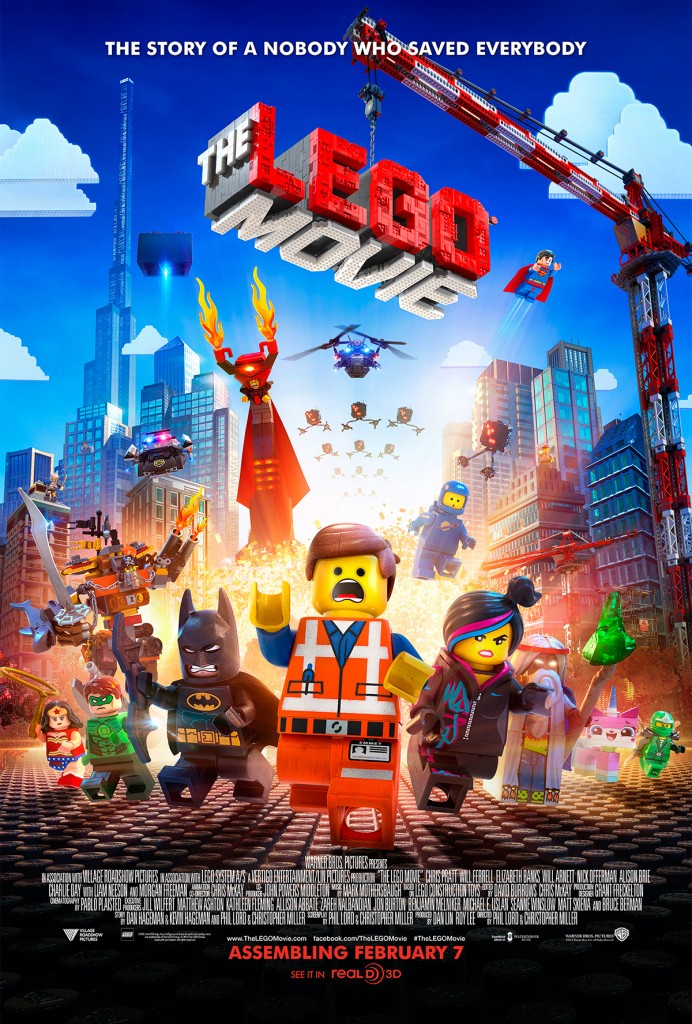 When The LEGO Movie was first announced, I was extremely apprehensive about the end result because frankly, like most AFOLs I didn’t think a full blown movie was necessary. There was always the fear that this was just another cash grab by Hollywood, looking to capitalize on one of the world’s most endearing brands.

All that being said, I’m happy to report that The LEGO Movie exceeded my astronomic expectations and is quite possibly one of the best animated movies ever made.

The LEGO Movie tells the story of Emmet (voiced expertly by Chris Pratt), a construction worker living in Bricksburg who is simply the most average person in town. Nothing about him is special or outstanding in any way. He lives his everyday life by the book, constantly consulting his volumes of instruction manuals on how to live his life.

The world Emmet lives in, Bricksburg is run by the benevolent President Business, an emperor-like leader who’s a stickler for order and uniformity. He keeps everyone happy by producing detailed instructions on what every citizen should do, what music they listen to and even the kind of TV shows they like. And it works well, with everyone constantly in a holly jolly mood!

The opening montage of the movie gives viewers a chirpy introduction to life in Bricksburg and Emmet’s occupation as a construction worker, set along to the tune of the movie’s extremely catchy theme song Everything is Awesome. It’s so catchy that I still listen to the song on loop every day before I get into work!

I was blown away by the introduction and an entire city of LEGO brought to life; the animation is slick and every facet of the city is buzzing with the hustle and bustle of an entire metropolis of minifigs. After the whirlwind introduction to Emmet’s brick-built world, I was immediately struck with the revelation that this was going to be a really special movie.

Emmet’s entire world changes when he discovers the “Piece of Resistance”, a mystical artifact that fuses itself to Emmet’s back and is the key to defeating an ancient and powerful relic known only as the ‘Kragle’. At the same time, he meets female protagonist Wyldstyle (voiced by the lovable Elizabeth Banks, a badass Master Builder who informs Emmet that he is now The Special, the prophesied hero that will save the LEGO world from the clutches of the evil Lord Business (voiced by Will Ferrell).

Won’t go too much into details about the rest of the plot as I don’t want to spoil anything but Emmet is sent on a whirlwind adventure through different LEGO realms, encountering all sorts of good guys and bad guys. The fun, jokes and hilarious references hit you fast and hard throughout the entire movie.

The LEGO Movie is one of the funniest animated movies that I ever watched and I found myself laughing at the huge variety of jokes that Phil Lord and Chris Miller managed to squeeze into the flick. There are rarely any parts in the movie where the action or humour slows down, which makes it one heck of a ride.

As a long time LEGO fan, I was also delighted that they managed to squeeze in an incredible amount of references into the movie. There are a ton of cameos from popular LEGO characters spanning themes that LEGO has produced over the years. Most of these cameos take the form of Master Builders, which are elite characters that are able to harness their creativity to think outside the box and create all sorts of things from LEGO. Keep an eye out for these Master Builders, many of which are characters from the Blind Bag Collectible Minifigures Series in addition to licensed characters.

There are so many tiny details to notice about the movie, such as during the building sequences where Master Builders use real LEGO parts from their surroundings which are subtly labelled with set numbers that those parts appear in.

I also really enjoyed the ensemble that makes up the main characters, with Vitruvius (voiced by Morgan Freeman), the source of wisdom of the group, Benny the 80s Spacemen (voiced by Charlie Day) the hyperactive super hyped up classic spacemen, dark and brooding Batman, eccentric pirate mech, Metalbeard and Uni-Kitty, a cutesy Unicorn-Kitten hybrid voiced by Alison Brie. Each character brings a unique dimension to the movie and you’ll easily connect with their antics on screen.

The LEGO Movie is everything I could ever want from a blockbuster motion picture about my favourite toy. Kids will love the jokes, bright colours and frantic action but parents and older folk will also be able to appreciate the humour that’s done so well in the film. I’ve got friends who know and care nothing about LEGO who walked out of the cinema loving the movie and raving about it.

I’m probably biased when I say this, but The LEGO Movie is an exceptional animated story, impressively bringing everyone’s favourite complex interlocking brick system to life, wonderfully magnifying and radiating LEGO’s core essence: fun and creative empowerment. I won’t be surprised if it wins an Oscar next year.

When The LEGO Movie opens in Australian cinemas on Thursday, 3 April, go watch it. You won’t regret a single moment of the movie.

If you’ve seen the movie, let me know in the comments about what you thought about it! Did you like or dislike anything in particular? Let me know!

P.S. One of my favourite bits about the movie was when the film (in dramatic meta fashion) pokes fun at Adult Fans of LEGO (AFOLS) for taking what should be a simple toy too seriously. Watch it and you’ll know what I mean 🙂