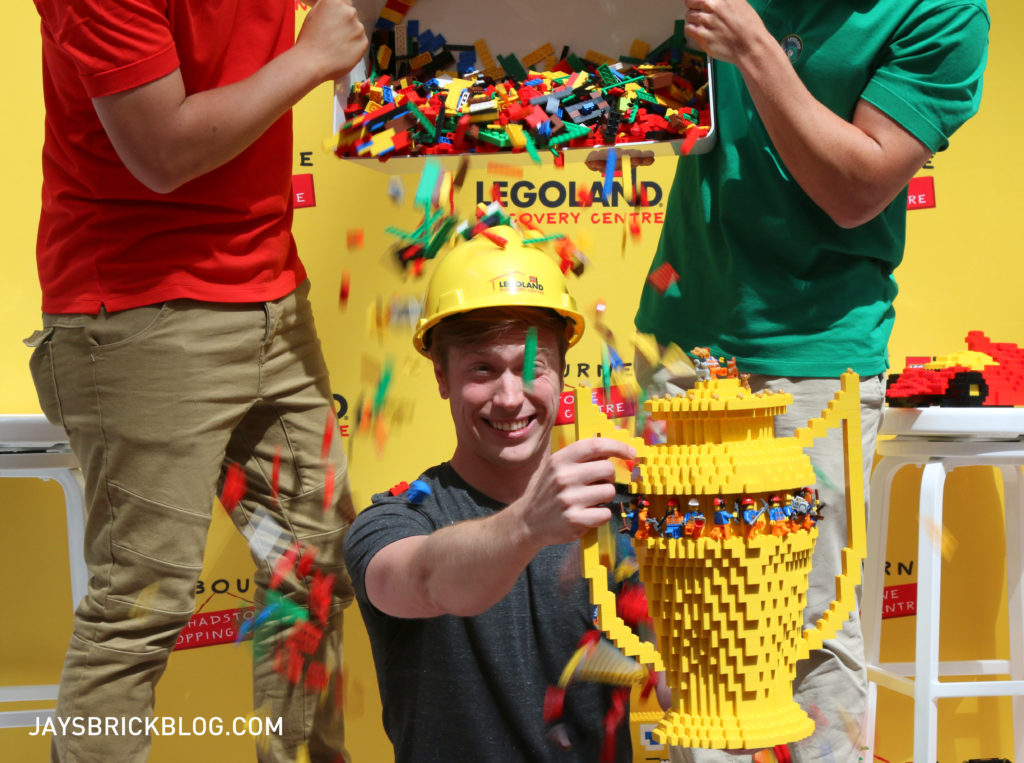 After an intensive weekend of LEGO building and interacting with kids, David Holder emerged as the winner of Brickfactor, landing him the coveted role of Master Model Builder at Melbourne’s Legoland Discovery Centre.

David, who is 29 and hails from Prahran will work in the special Master Model Builder studio next to the attraction’s Creative Workshop to develop new features in the attraction, curate special exhibitions, build new models, and share his special building skills and techniques with the hundreds of thousands of children and families visiting the Centre.

The Master Model Builder will also be responsible for on the floor interaction outside of the Creative Workshop and helping kids build in the LEGO Friends Area, Racers Build & Test and DUPLO Farm. 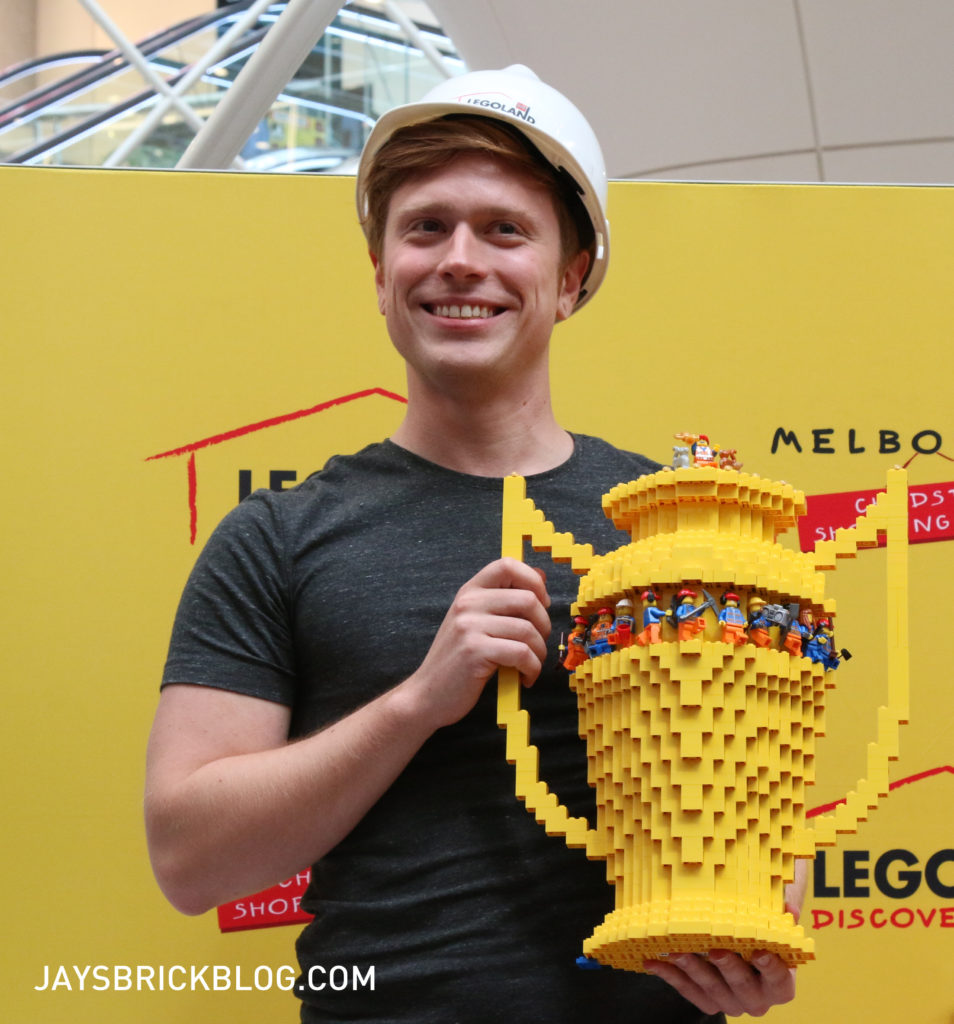 David beat 13 other finalists of Brickfactor, a nationwide competition and search for the Master Model Builder that was a bit like an interactive job interview which was held over 2 days at Chadstone Shopping Centre this weekend.

From hundreds of applicants who entered via a video submission, those shortlisted made it to the first day of Brickfactor where they competed in a series of themed building challenges (sports & hobbies, and aquatic life) where they were not only tested on their freestyle building skills, but also ability to interact with children and the public. 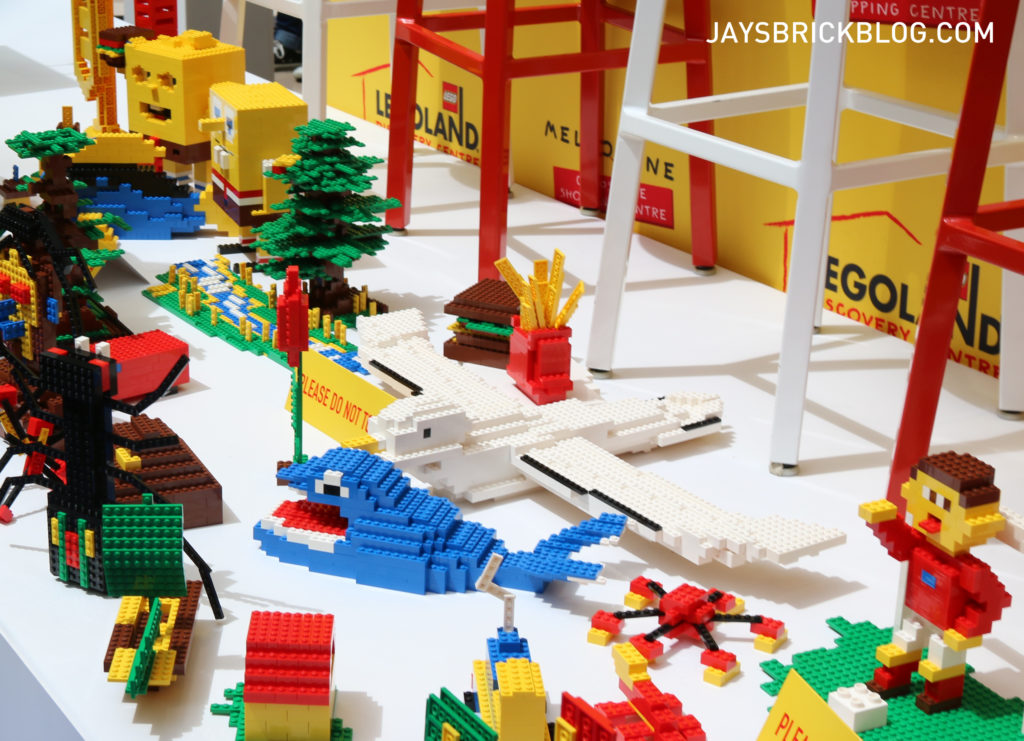 Here are some of the builds from Day 1.

The judging panel consisted of staff from the Legoland Discovery Centre, and Ryan McNaught. 14 builders then made it to the final round on Day 2. The field of competition had so much quality that they added 2 more slots (the original number was 12) to the final day. 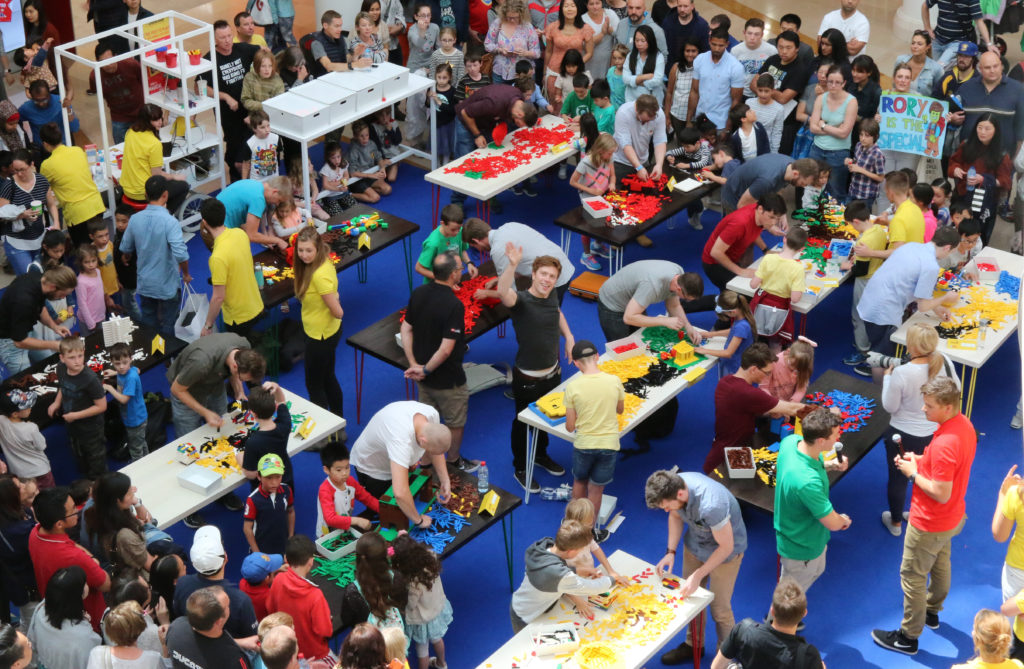 I was able to make it for the final day of the competition, and had a much better time than expected.

So firstly, I have to be honest here, I was initially quite apprehensive and skeptical of this entire Brickfactor competition that was hosted by the Legoland Discovery Centre. Mostly because I thought it was pretty gimmicky and a huge publicity stunt (which it was).

I also didn’t like the “competition” element, especially the idea of pitting of LEGO builders against each other. It just seemed like a pretty exploitative way to drum up publicity for the Centre- which I totally get from a PR and Marketing perspective.

Anyway, that’s the mindset I had going into today’s event. I really wasn’t expecting much. 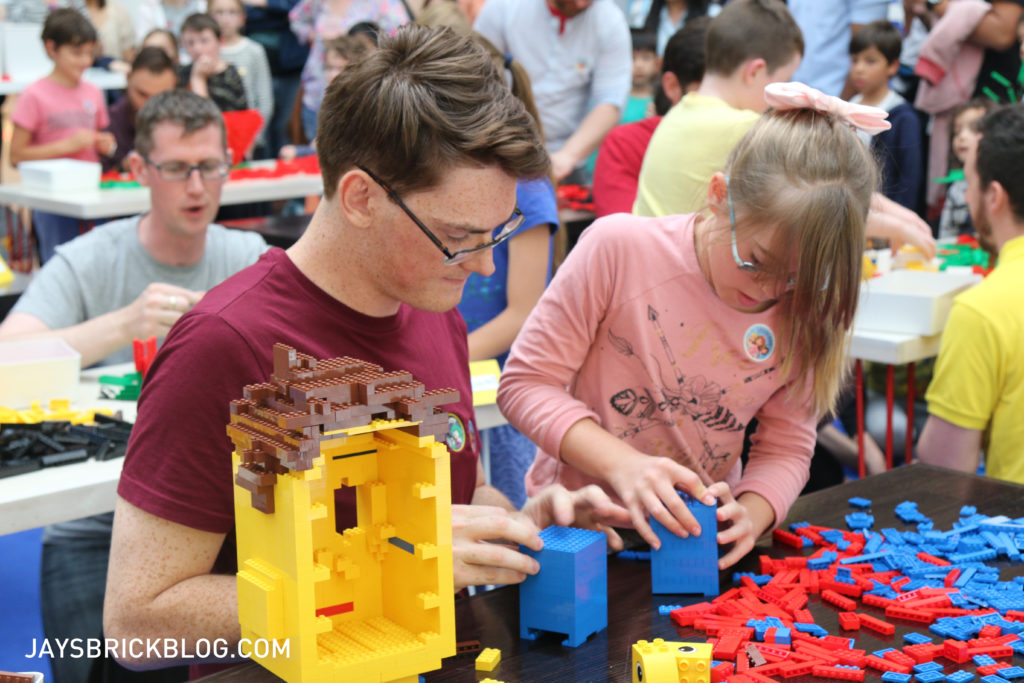 I think today is one of those days that I was glad to be proven wrong. And also a reminder to dial down my cynicism.

If you were watching on my Facebook Live Video, I got the chance to flit around the tables where the builders were hard at work on their LEGO models. The theme for the final challenge was to build something that expressed their personal selves, and they had a few kids from the crowd as assistants. 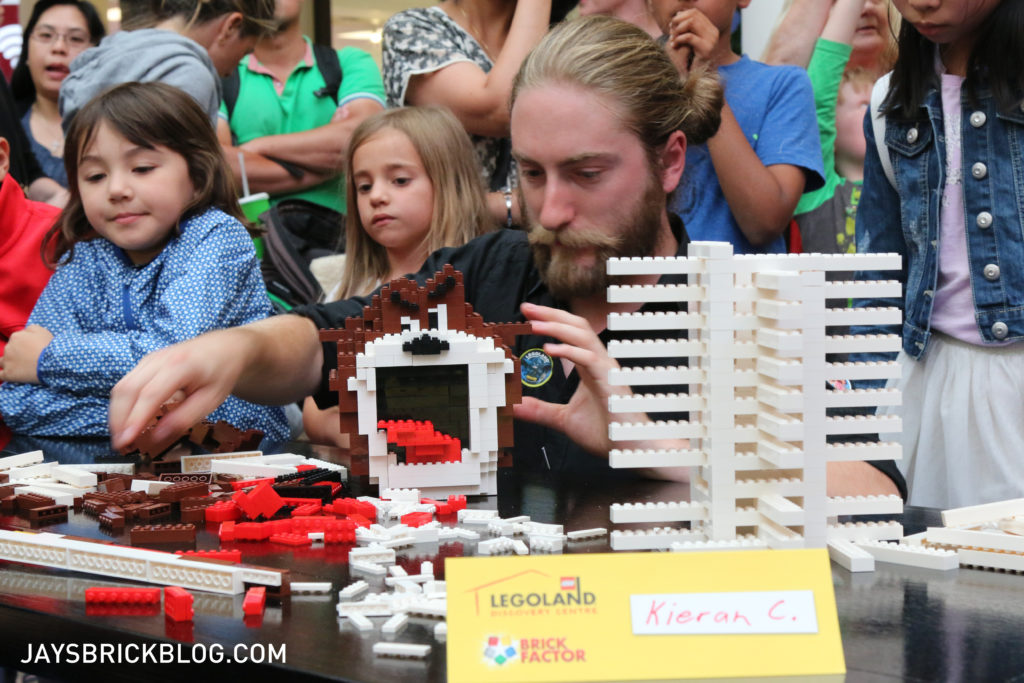 I really enjoyed chatting with the builders and hearing about why they were there, what they were building and what the job of Master Model Builder would mean to them. 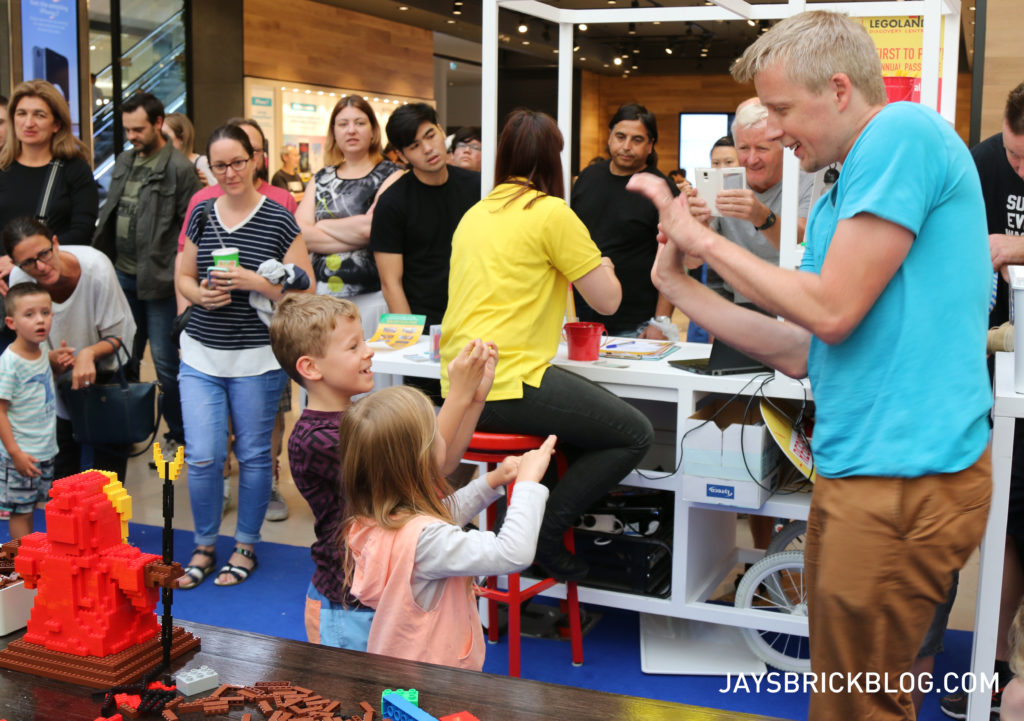 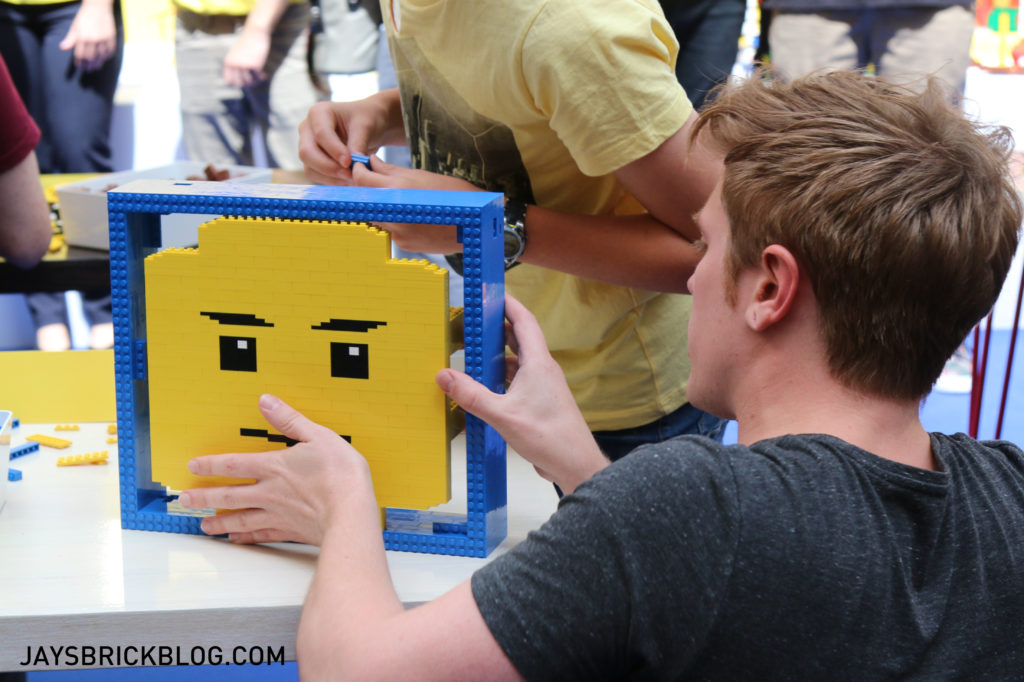 I also got to observe them at work, and I have to say that the judges picked the Final 14 really well – they each had great rapport with the kids that were assisting, and they genuinely looked like they were enjoying themselves doing so – which is pretty much the most important part of the Master Model Builder job.

My main takeaway from the day is that there was no person there that genuinely didn’t want to be there. 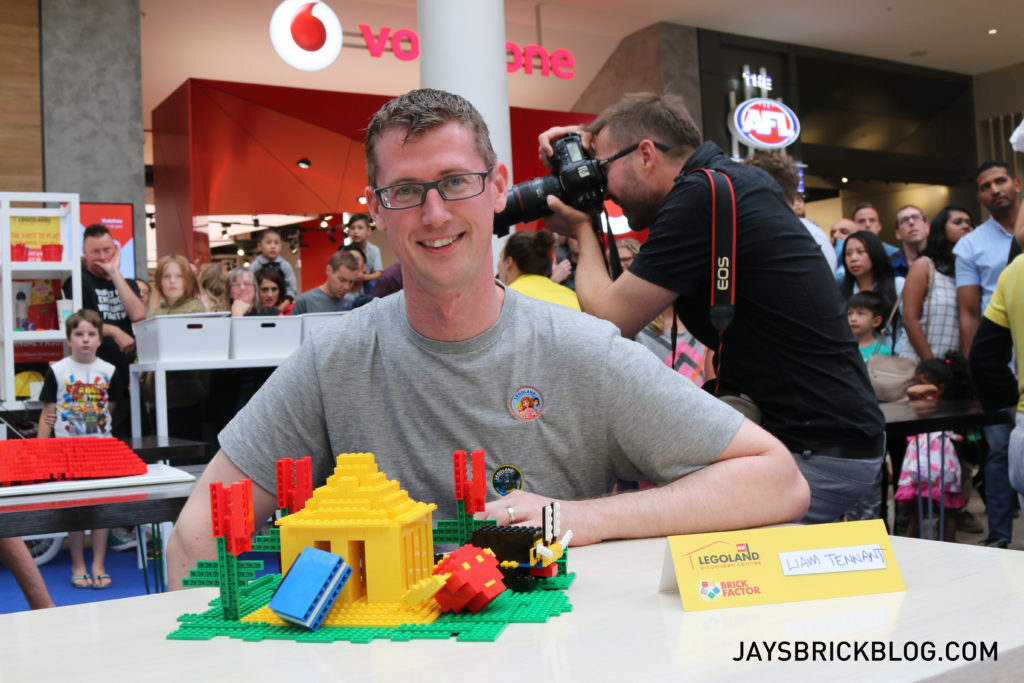 I got to chat with Liam, who has a background in architecture and flew in all the way from Western Australia. “I joined because i wanted to test myself. I felt like I would be a good fit for the job and knew i would regret it if i didn’t at least try.”

He described the weekend-long competition as “hectic, nerve-wracking but fun”. Despite not winning the competition, Liam was over the moon at making it to the final 14, and felt like his application and long journey from WA was fully justified.

“The most memorable part of Brickfactor was the support and encouragement of other competitors their friends and family. I came over from Perth by myself but never felt alone. I was not expecting that. Networking and meeting more like-minded people kind of adds to that.”, Liam added. 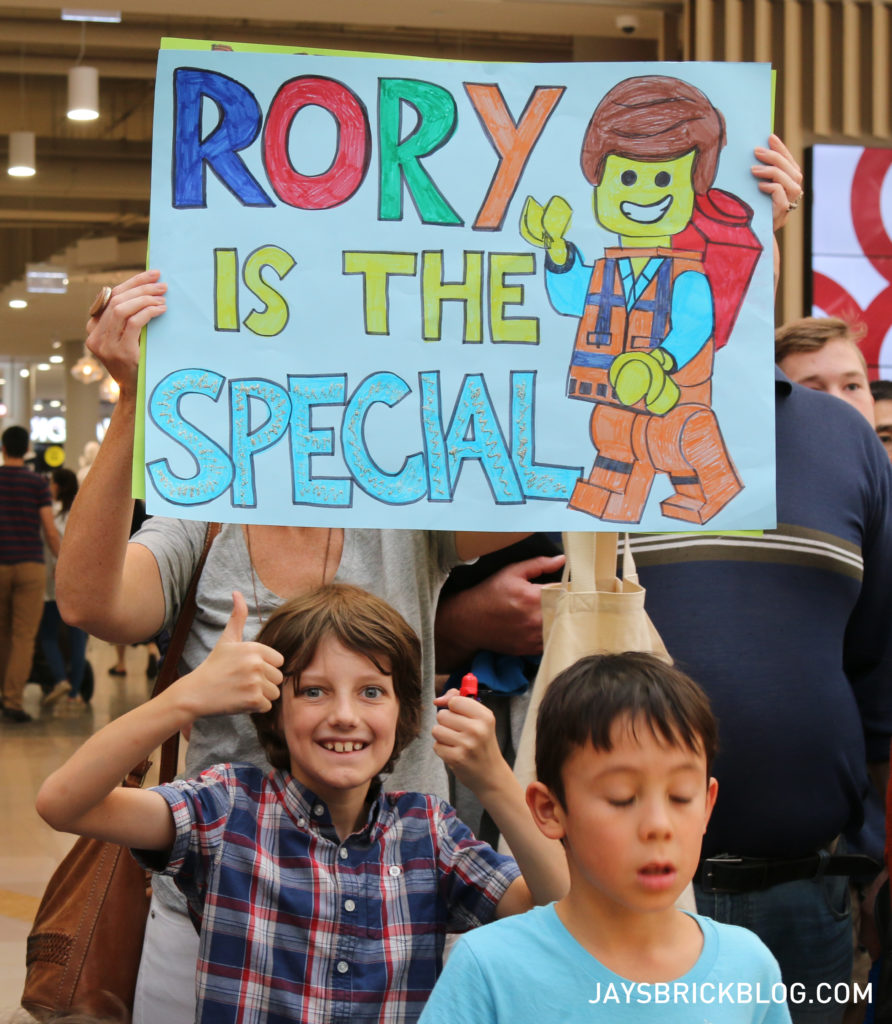 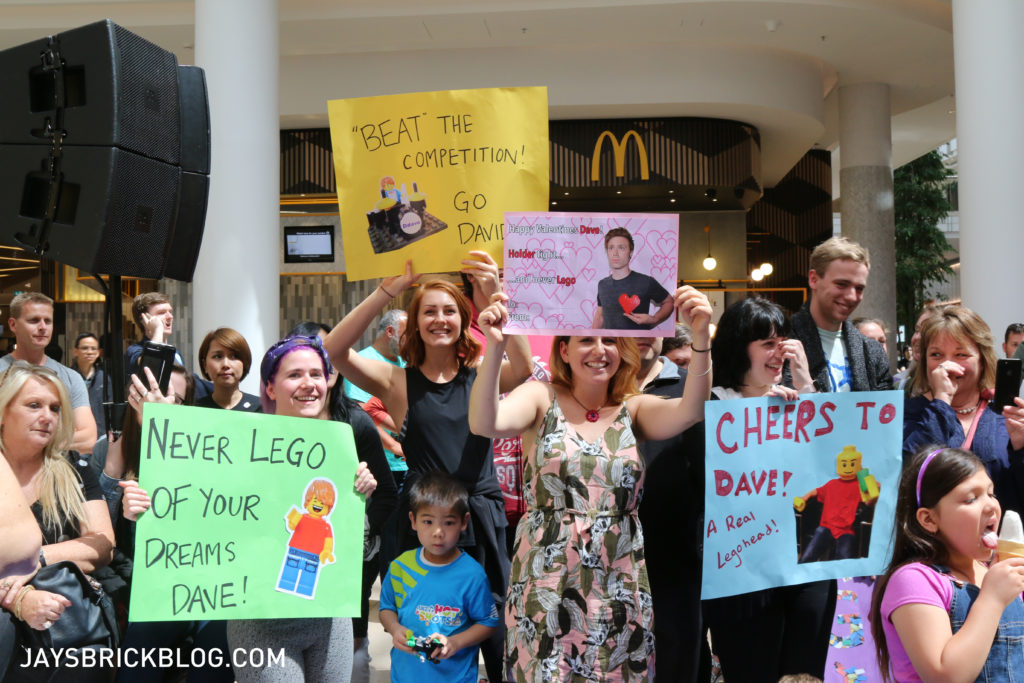 I really enjoyed the signs designed by supporters of those in the Final 14. Dave had a massive cheer squad, which may or may not have contributed to his win.

Despite being situated right smack in the middle of a loud shopping centre, the crowd got really involved and it was hard not to get caught up in the positive vibes from their friends and family cheering them on. 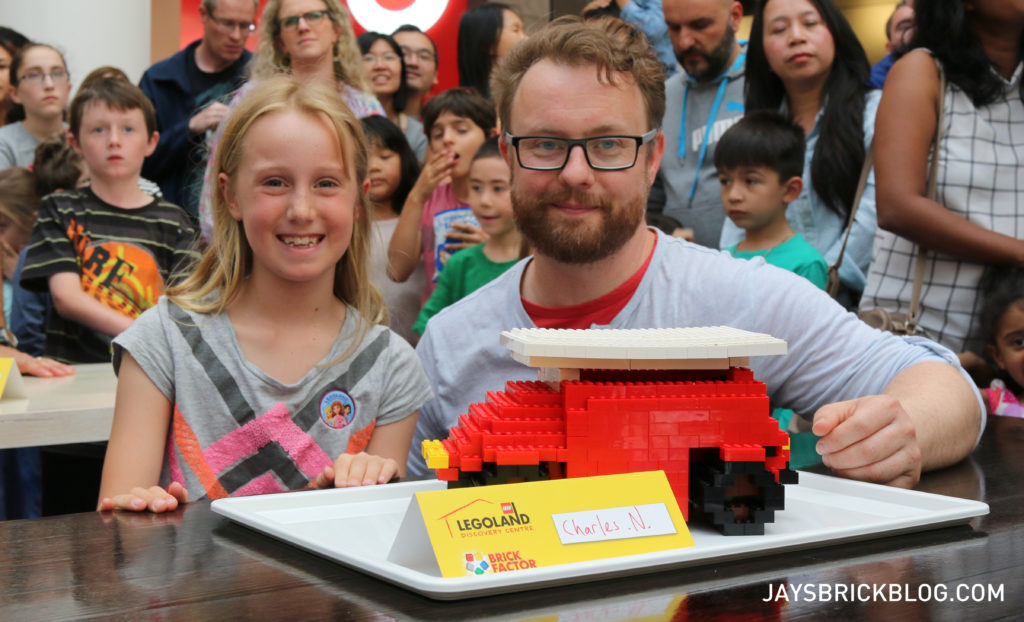 Charles N with his Mini Cooper. Charles has driven a Mini since he was 18, so it holds a very special place in his heart! 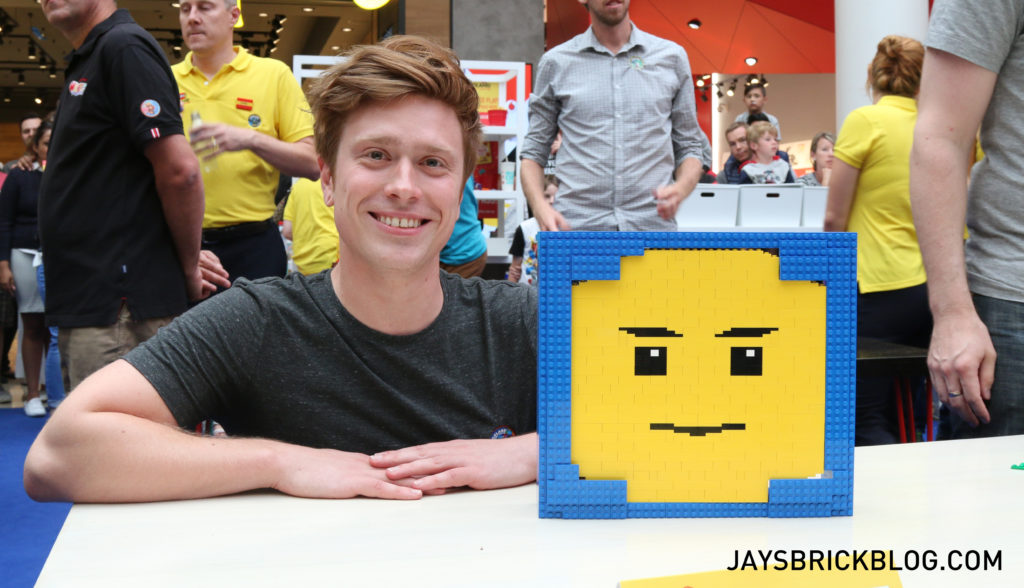 David Holder and his mirror which reflects himself as a minifigure. 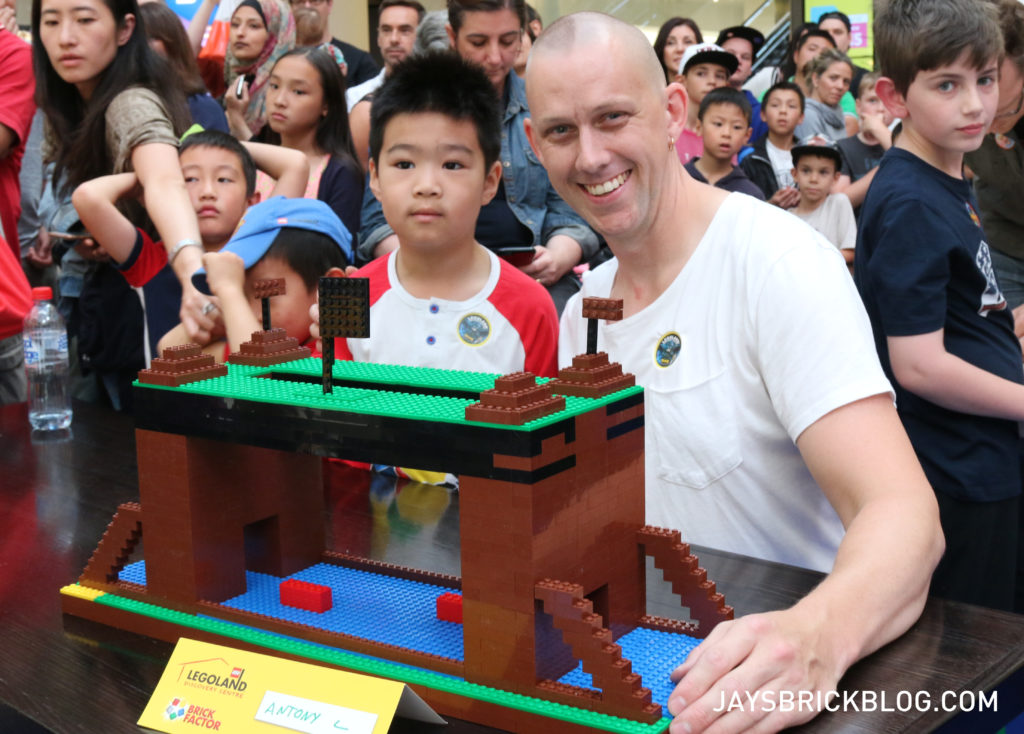 Anthony Lloyd and his Tower Bridge 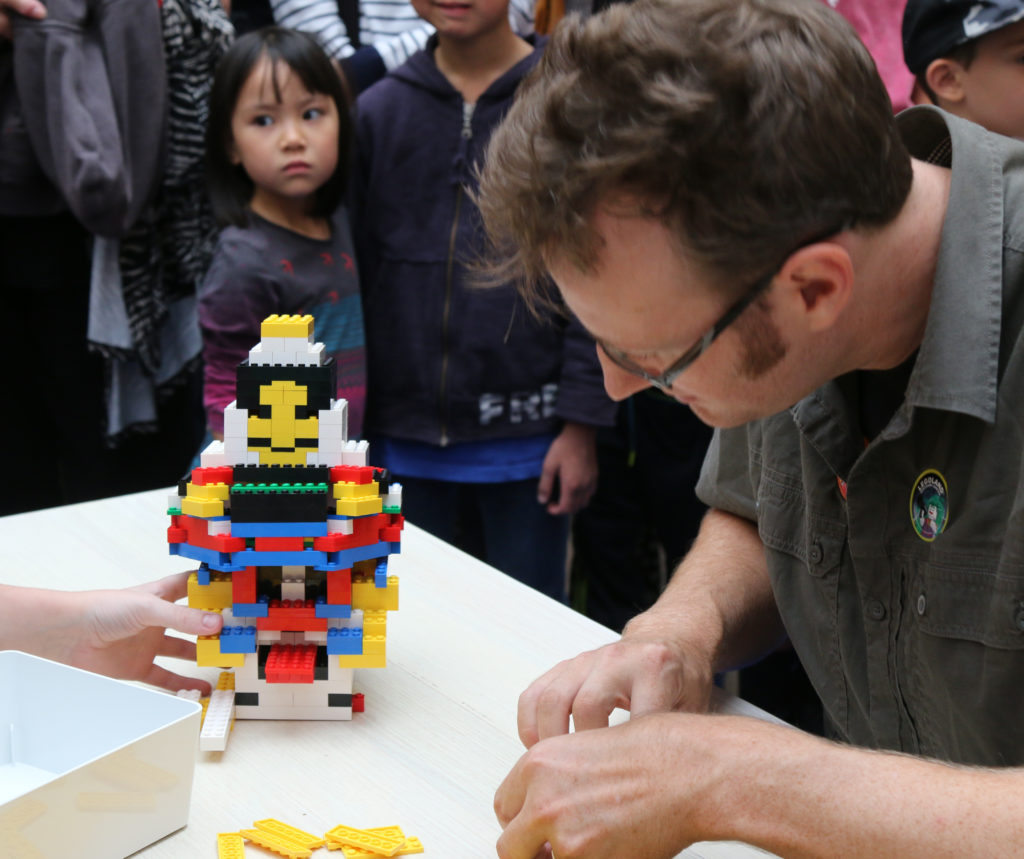 Joshua Semple – this was the only photo that I got of him. You can see his completed model later on where all the models are displayed together. 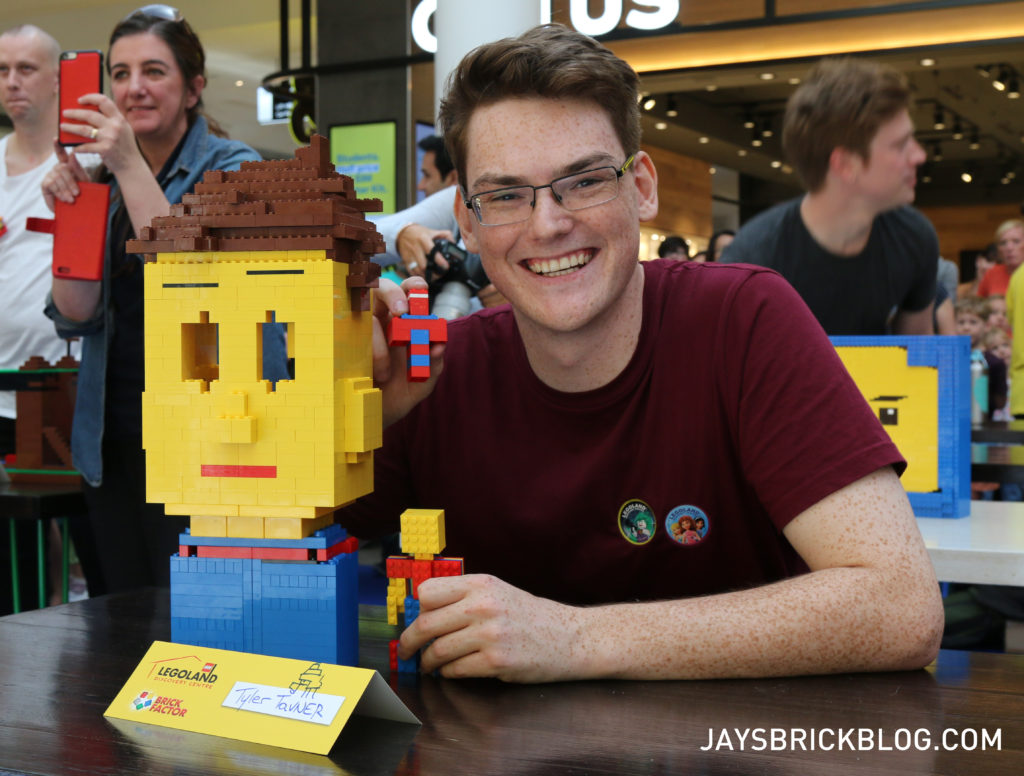 Tyler Tavner with a self portrait of himself. 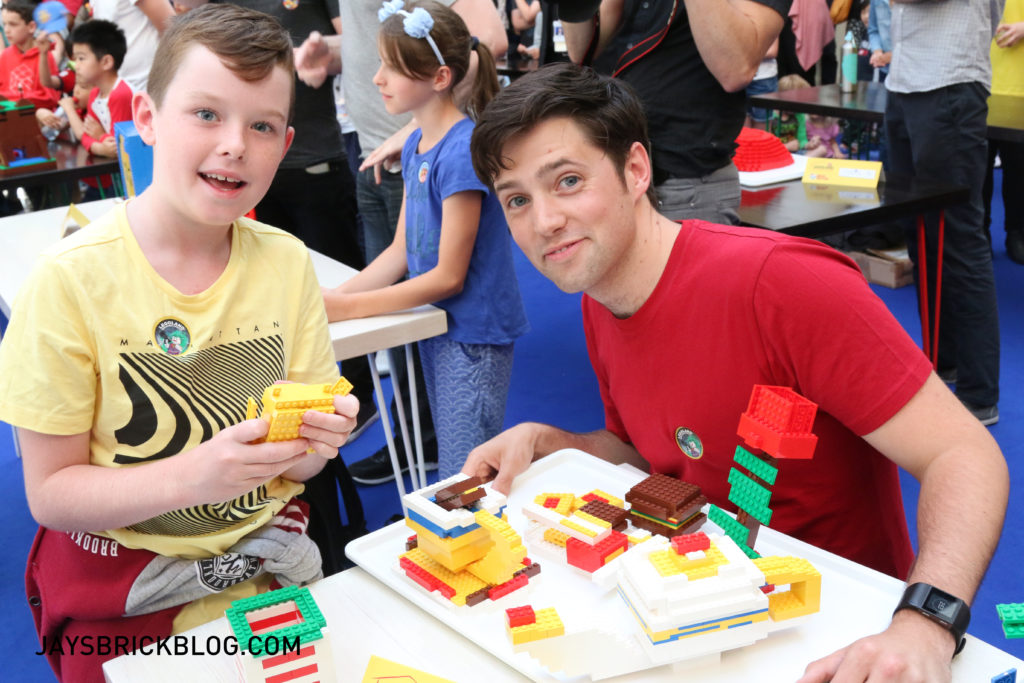 Thomas with his tea set! He’s English so tea is obviously very close to his heart. I really enjoyed talking about our favourite kinds of tea. His is English Breakfast and I love a good Earl Grey. 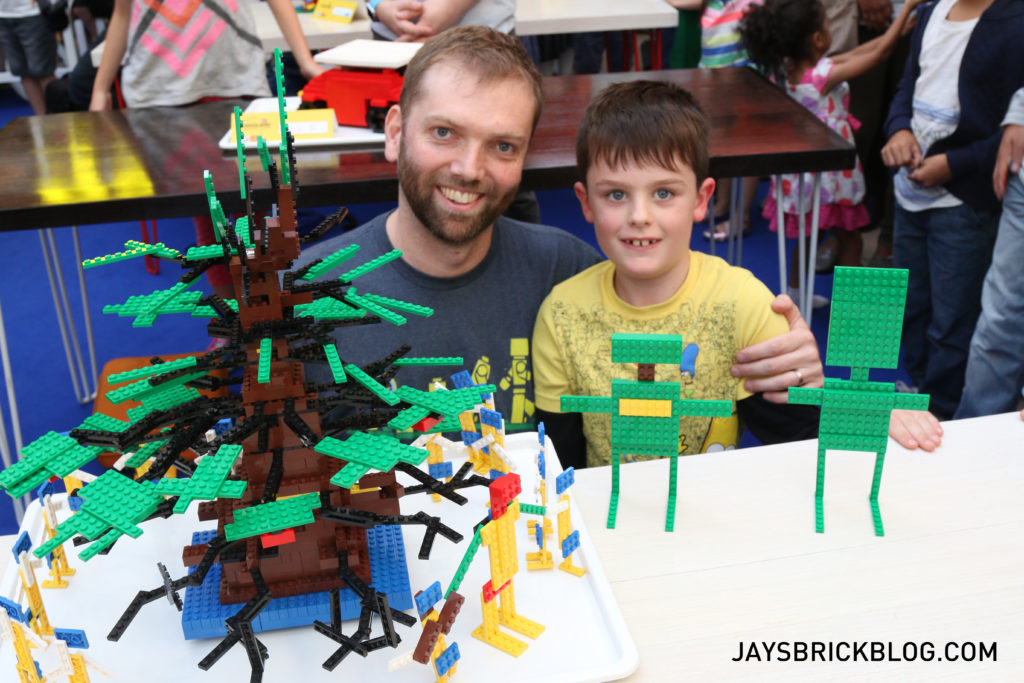 Rory Archer with his bonsai tree. He has about 20 bonsai plants at home. 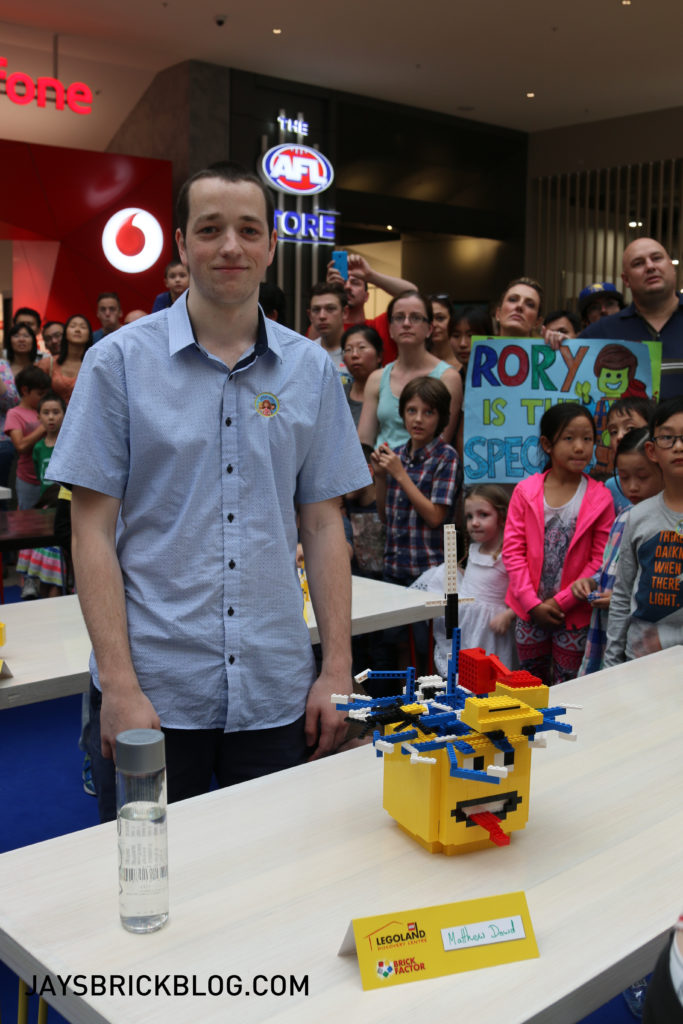 Matthew Dowd and his representation of unlimited creativity exploding from his mind. 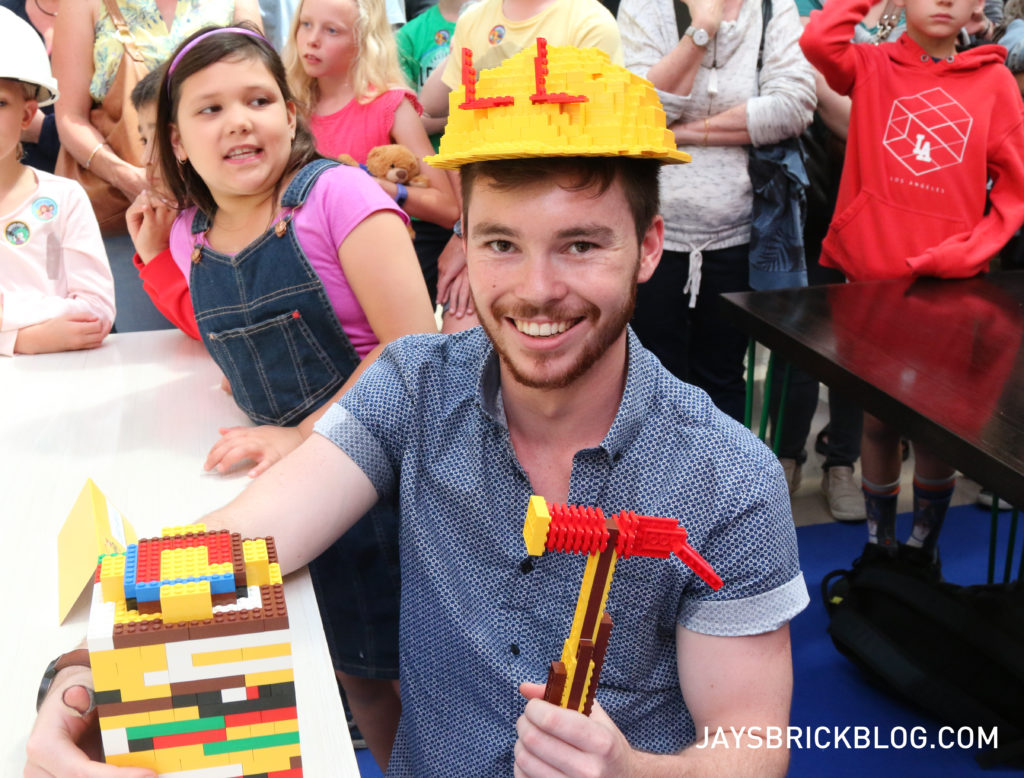 LEGO Lewis and his really creative hard hat and hammer! Super impressed that he got the helmet to be the correct size for his head! 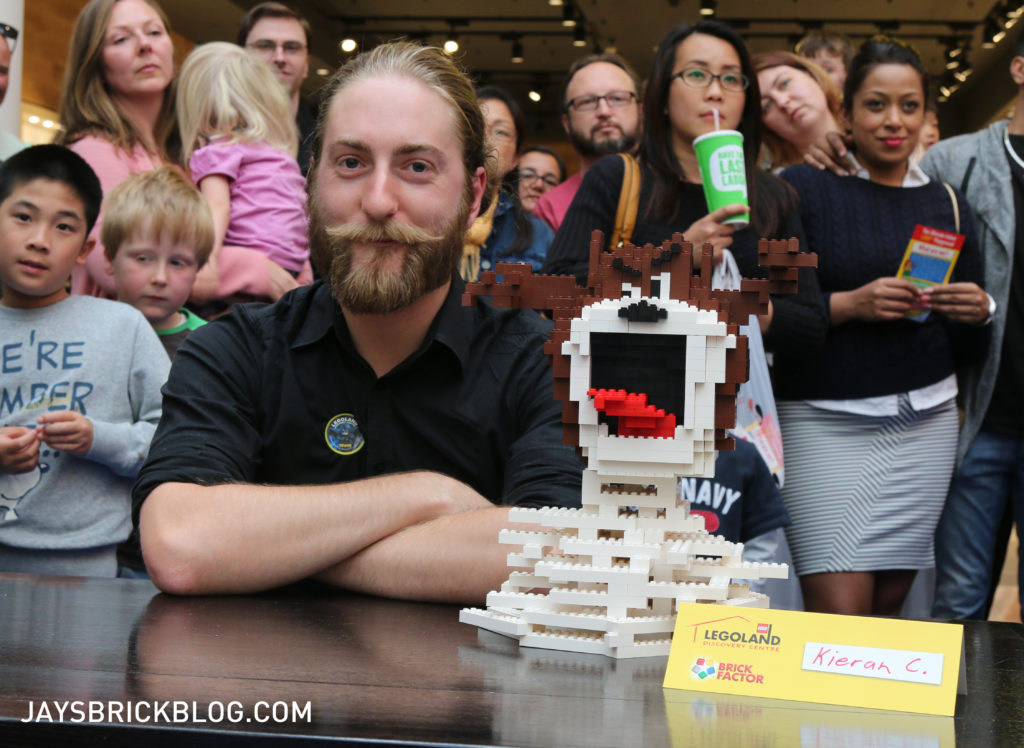 Kieran Maclachlan and his Tasmanian Devil, reflecting his Tasmanian roots and whirlwind way of working. You may remember Kieran from Brickvention where he was awarded Best In Show for his insane Technic Motorcycle. The Tasmanian Devil was one of my favourite models on display. 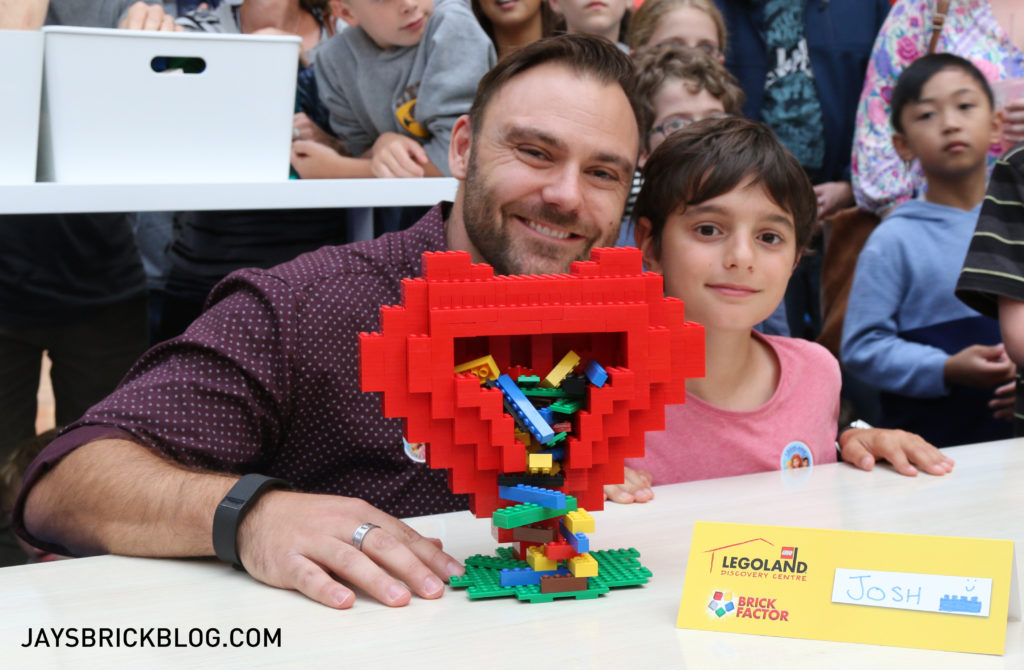 Josh and his heart, which of course is filled to the brim with LEGO. 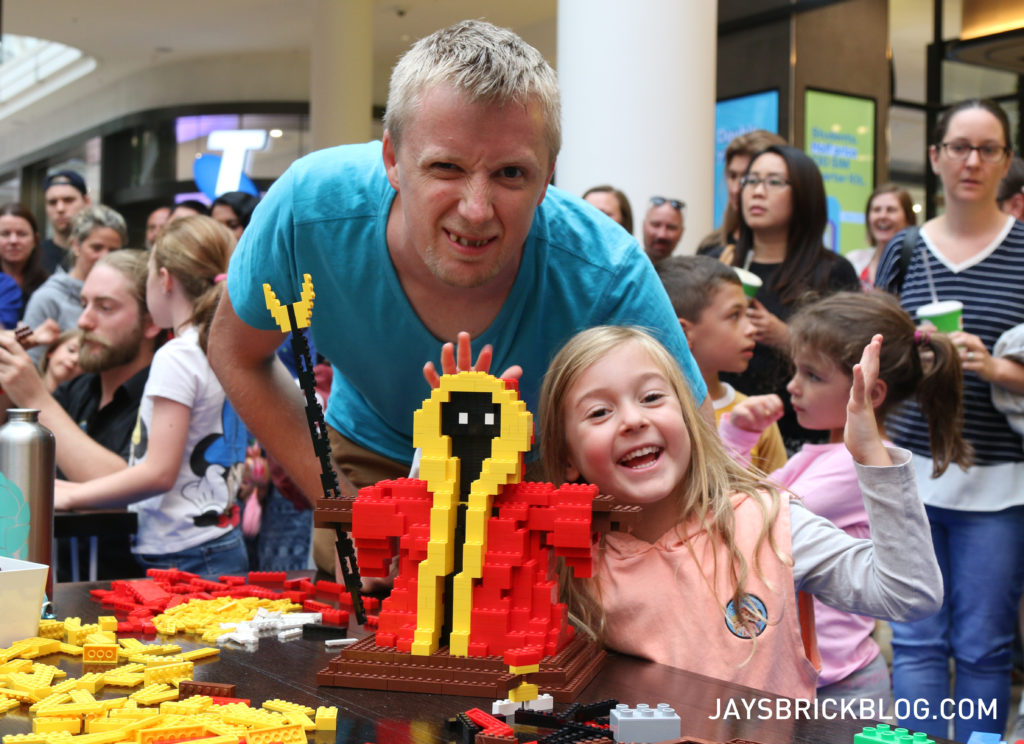 Clint with his Wizard, which was one of his nicknames at work. 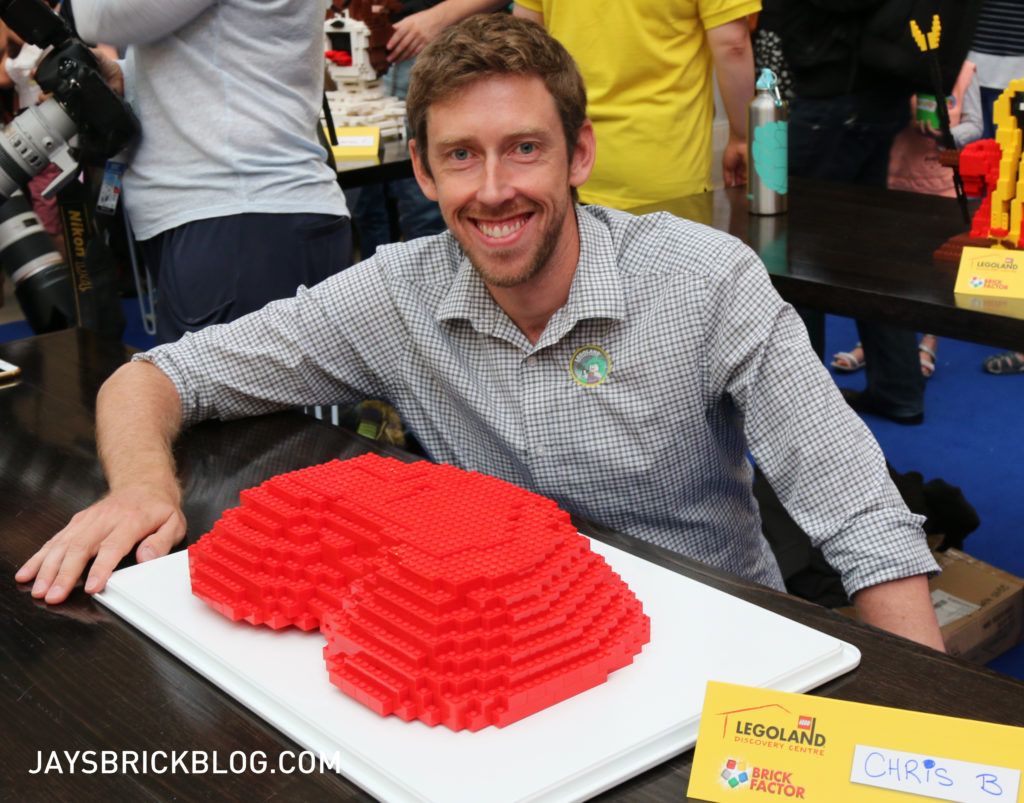 Chris Byron with his heart made out of LEGO. 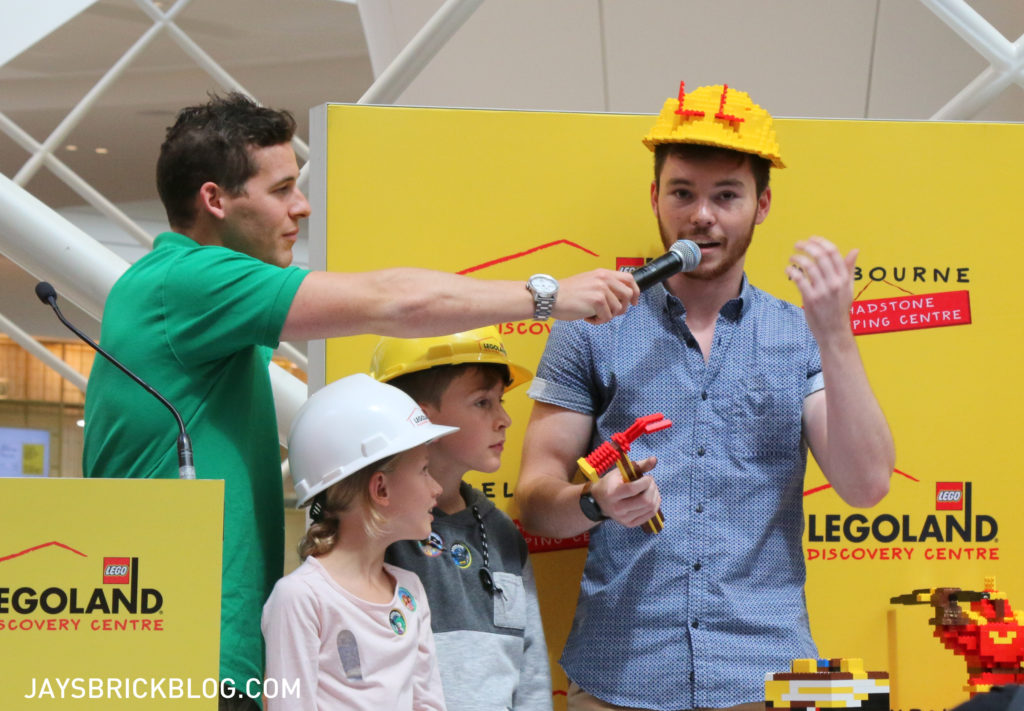 After they completed their models, each builder had to go on stage to talk about their models. 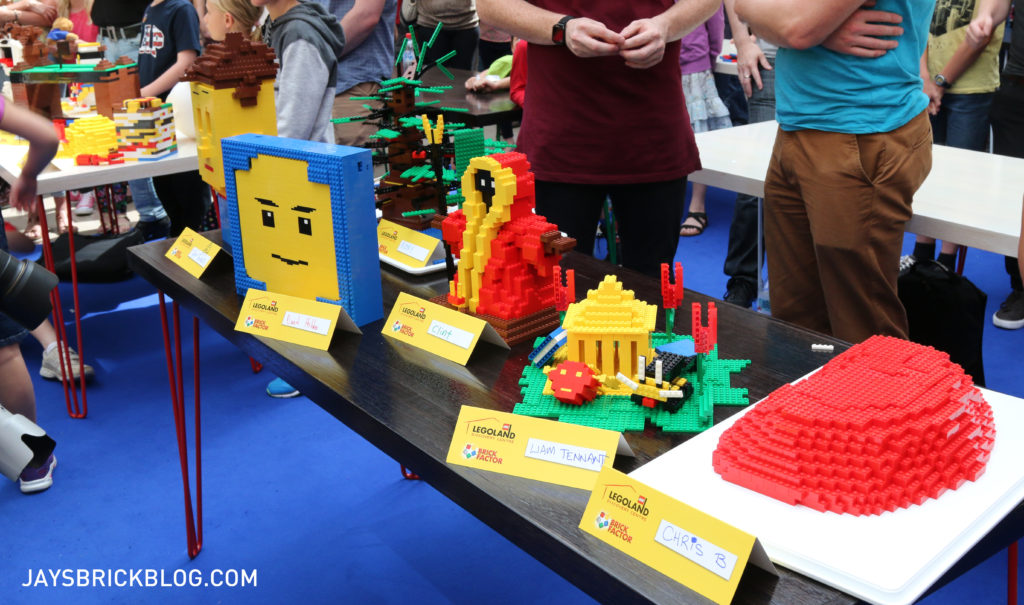 Here are some of the models all in one shot. 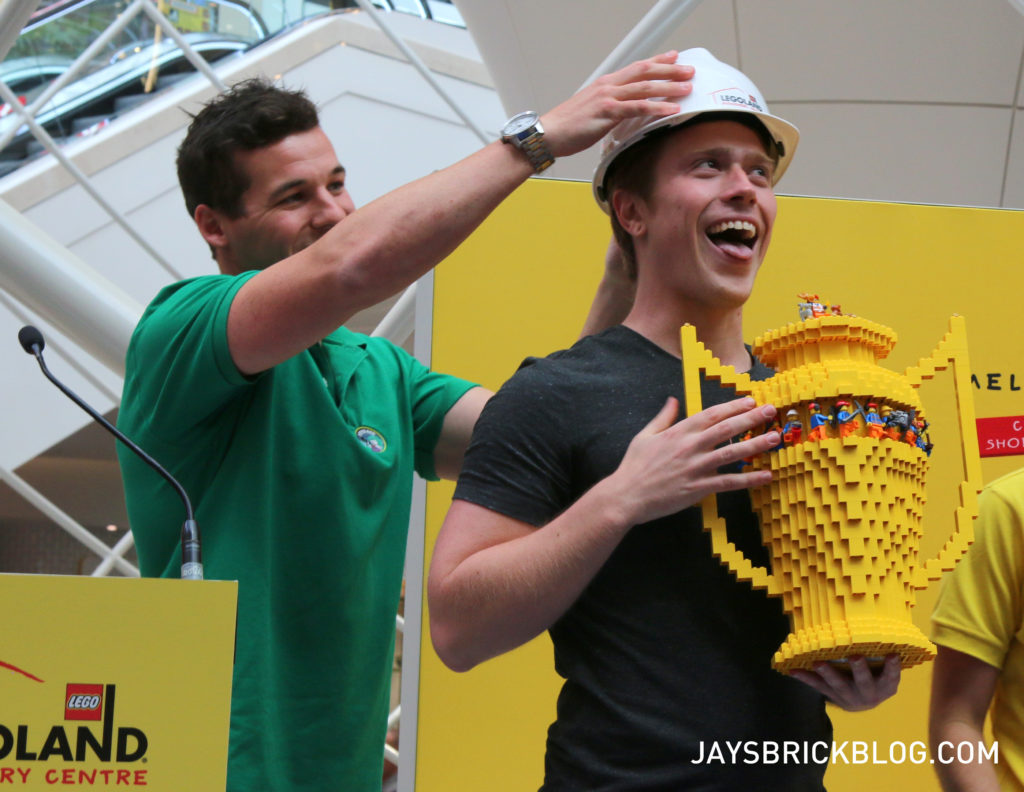 It wasn’t long till the results were announced – according to Legoland Discovery Centre Melbourne’s Marketing Manager, it was a pretty hard decision to make but they ultimately decided on David Holder!

Here’s the moment from where he was “crowned” with a Legoland Discovery Centre Hard Hat.

And when he got a customary “Brick Shower”. 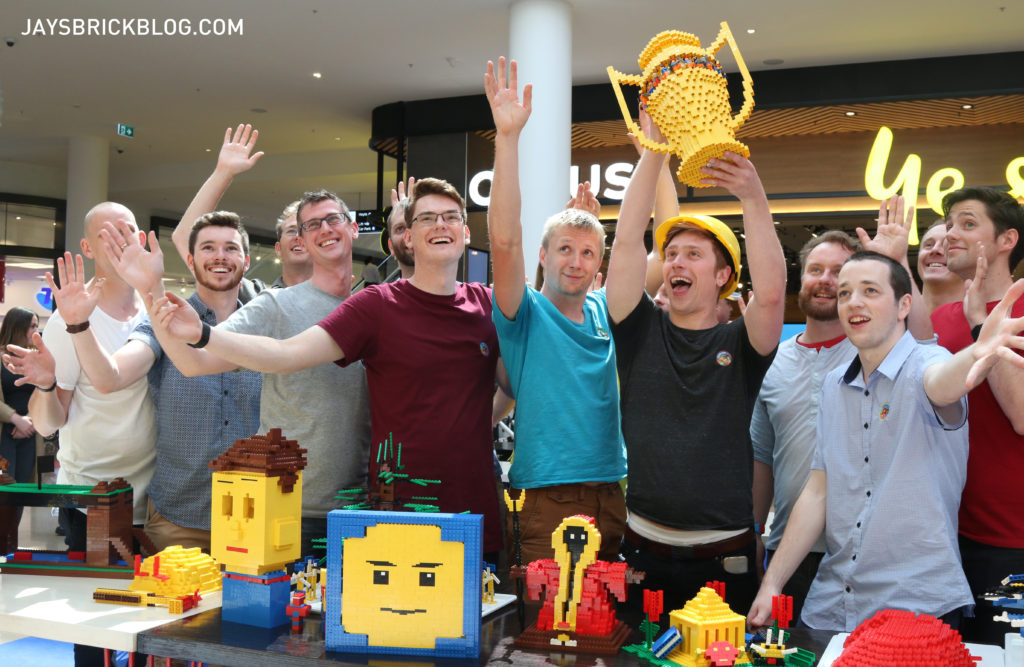 Here’s a partial group shot with the winner. Didn’t get to catch everyone because I couldn’t fit everyone in my lens. Sorry to anyone that got cut out!

So yeah, I’d like to congratulate Dave on becoming Legoland Discovery Centre Melbourne’s Master Model Builder! It’s such an insane job interview, and is way harder than any interview I’ve ever had to do.

That’s it for my experience at Brickfactor, and I‘d also like to commend all builders involved. It’s not every day that you get to see LEGO creativity demonstrated “live” and I had a really great time talking to everyone there. Their models were also super impressive (given the limited number of elements at their disposal) and great to behold. I hope that these get displayed at the Centre when it opens up.

Despite it being a competition, I didn’t really get a competitive vibe out of the people there. In fact, there was this cool sense of camaraderie from builders that hailed from different parts of Australia, all bonded by their love of the LEGO brick.

I’m really looking forward to seeing Dave in his element when the Legoland Discovery Centre opens on 18 April. If you’d like an early sneak preview at the centre, be sure to check out my impressions from the Hard Hat Tour.

Special thanks to the Legoland Discovery Centre team for having me at Brickfactor!

« LEGO 70917 The Ultimate Batmobile blows every other Batmobile out of the water
Review: 40236 Romantic Valentine Picnic »