The Nuremberg Toy Fair is currently running and LEGO have unveiled (publicly) most of the new sets that we can look forward to from the second half of 2016! It’s a fantastic preview of things to come and to decide on which sets or themes are most deserving of your money.

I haven’t even gotten through all the new 2016 sets yet, so it’s been quite overwhelming processing all the new sets that are coming our way in a few months!

That said, there’s plenty to be excited come June 2016 when these new sets get released. Here are some of my favourite pics from the Nuremberg Toy Fair 2016.

Special thanks to PromoBricks for permission to use some of their photos. Do check out their website and Facebook page to view a metric ton of photos of new LEGO sets from the German Toy Fair. 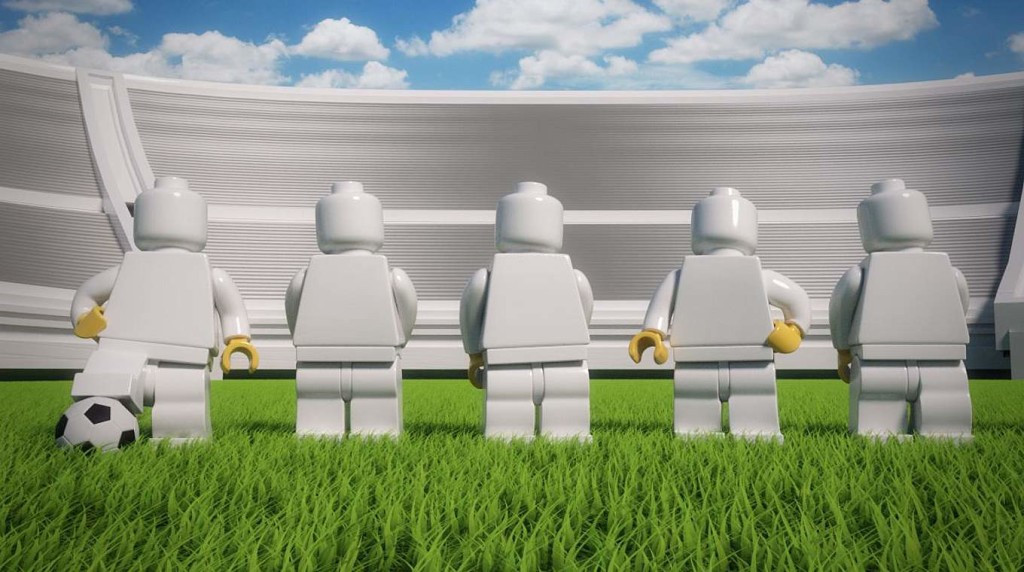 One of the announcements that I’m most excited/intrigued about is the next “themed” minifigures series that’s based on the German National Football (soccer) Team in conjunction with the upcoming Euro 2016 tournament. No photos of the actual minifigures were shown, but my guess is that they’ll be in the same vein as 2012’s Team GB Minifigures. 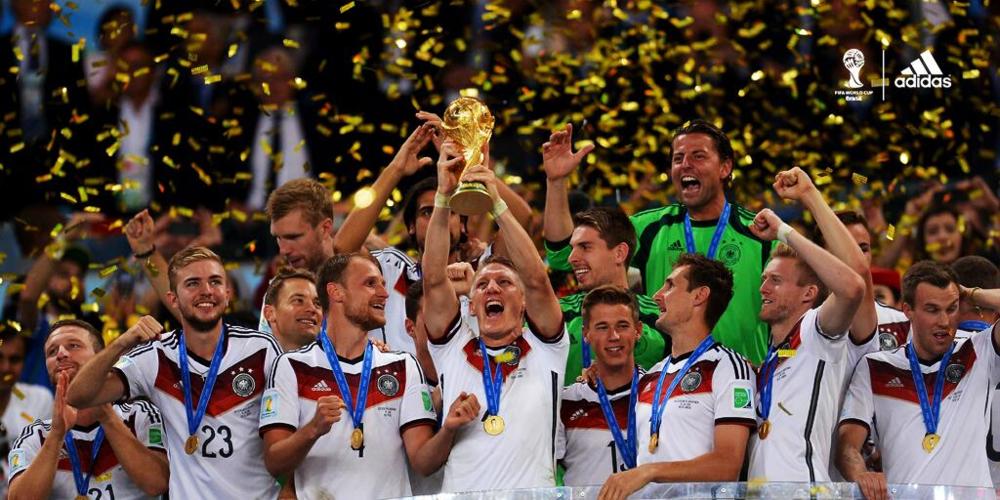 I’m a huge football fan so I’m naturally looking forward to being able to own minifigure versions of some of my favourite German players (Thomas Müller, Bastian Schweinsteiger and Manuel Neuer among others).

The German Football Minifigure series will be released on 14 May 2016 and will feature 16 minifigures in mystery blind bags. Each bag will cos 2.99 euros and it’s unclear at this stage if these will be released outside of Europe/Germany.

My only concern is that… I can’t quite imagine how the minifigures will look. Football players all have generic jerseys, just with different names and numbers printed on their bags. Because the focus is only on one national team… I really can’t imagine there being a lot of diversity with the designs.

We may get alternate football kits (Home/Away) versions and I hope to see some retro kits as well or maybe some legendary players like Beckenbauer, Oliver Kahn and Michael Ballack feature.

We’ll find out more in Spring when the official lineup is revealed. Expect to have to pick a set up from Bricklink or eBay as I highly doubt we’ll see these outside of Europe. 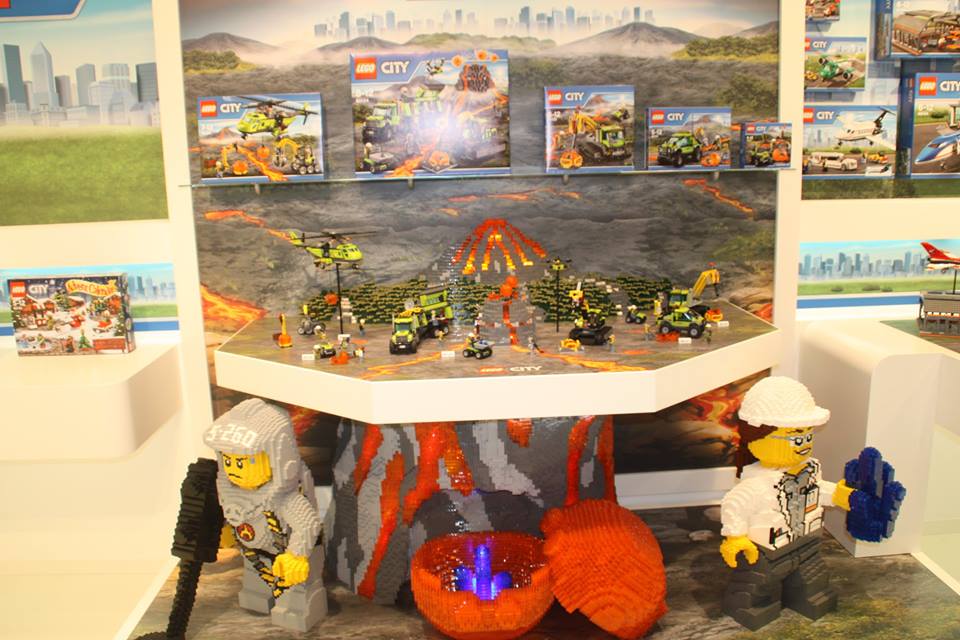 One of the themes I was most excited about was the City Volcano series – a scientific City sub-theme in the same vein as the Arctic and Deep Sea Explorers where the focus is on exploration and discovery.

When details of the theme was first leaked, the idea of Volcano and scientists studying lava flows and magma certainly sounded like a great idea but now that pictures are out, I’m not too convinced.

Other LEGO blogs like Brickset have lambasted the lime-green colour scheme of the vehicles, but I think they look okay. The vehicles do remind me of the Constructicons from Transformers and I believe that we’ll see some MOCs using the new parts. 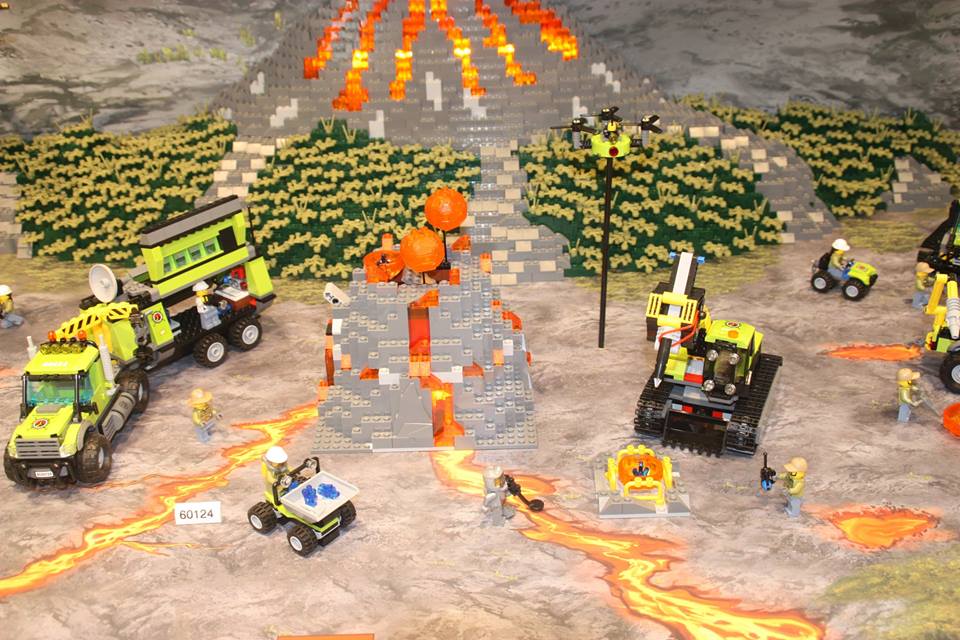 Some of the vehicles look quite interesting but they’re a little on the small side and frankly, feel a lot like rehashed Arctic sets, just in a lime green colour scheme.

Will have to wait till I get these sets on my own to come to a decision, but I can’t say that I’m extremely excited about them. And that volcano is just atrocious and feels extremely lazy. 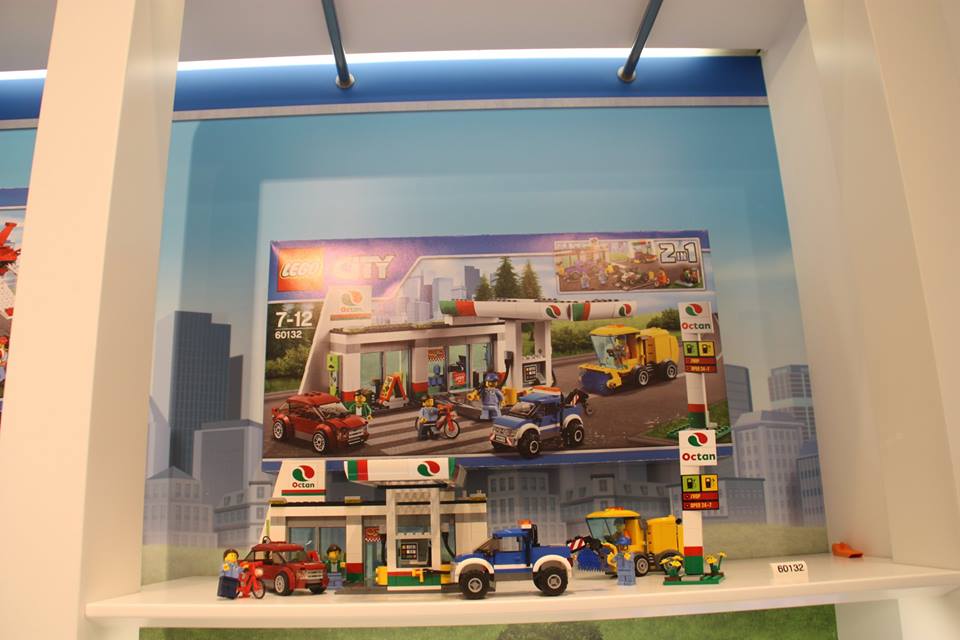 I am however, very excited about the more “civilian” LEGO City sets. 60132 Gas Station s an absolute beauty and I can imagine that you might 2 or 3 of these sets to create a decent sized gas station.

The Octan Servo brings me back to the LEGO Town era, where we had much more emphasis on normal structures and buildings instead of a constant focus on cops, robbers and firemen. 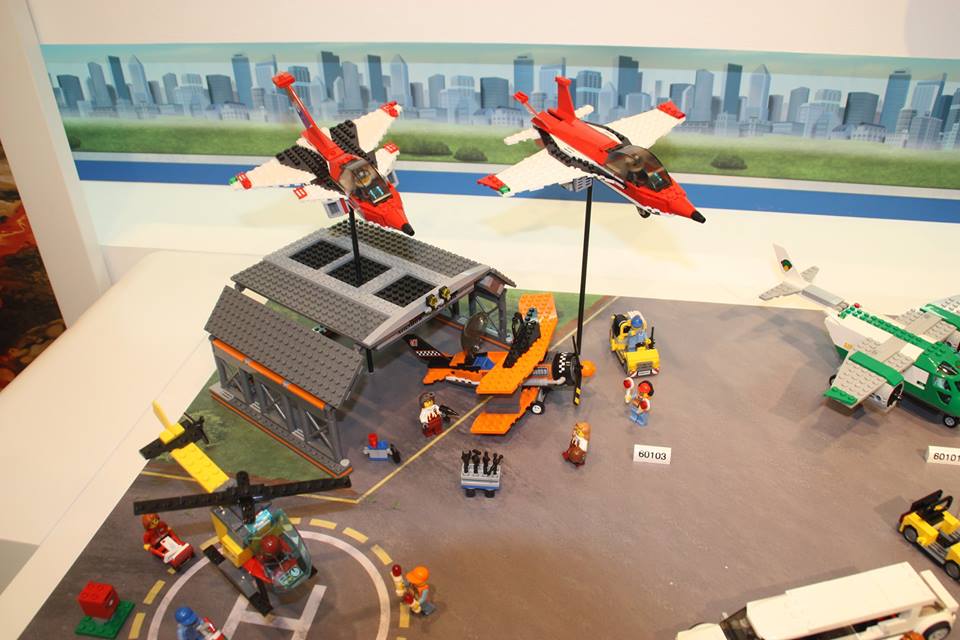 Another set I’m excited about is 60103 City Airshow, which features a great looking hangar and stunt planes! 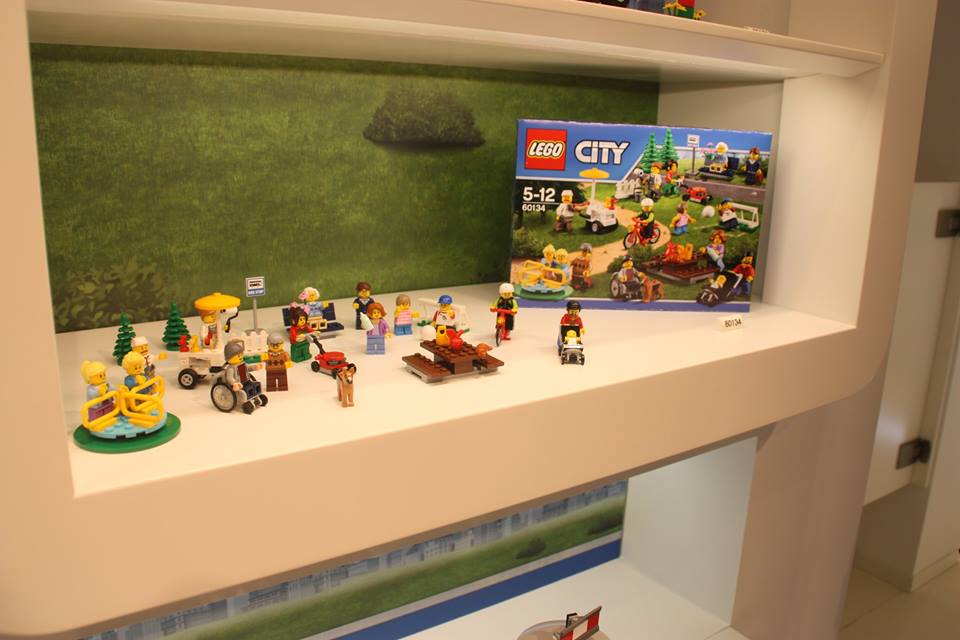 The highlight of LEGO City for me has to be 60134 Fun At The Park, a fantastic looking Minifigure-focused set that 13 minifigures (and one baby) just enjoying themselves in the park.

It looks like an excellent way to quickly up your LEGO City population and looks to feature some pretty interesting new torso prints and accessories! 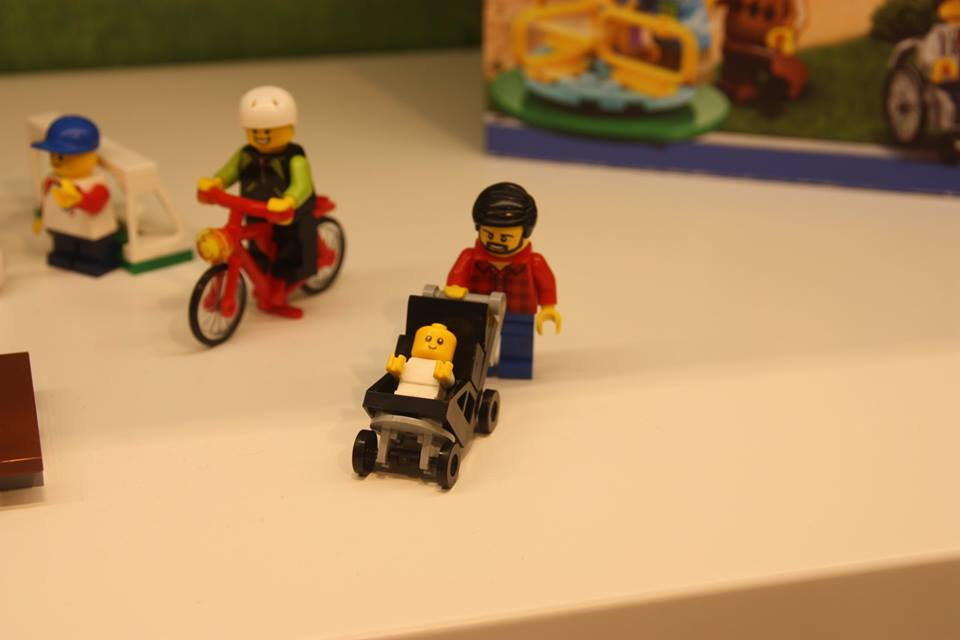 While the first disabled minifigure is currently making headlines and is quite cool, it doesn’t hold a candle to the very first LEGO baby minifigure complete with a tiny body and hands!

Here I am getting excited about a baby in a swaddle from Series 15’s Tribal Woman and LEGO surprises us all with another baby minifigure.

I do admit it looks kinda freaky… and will take some time to get used to. 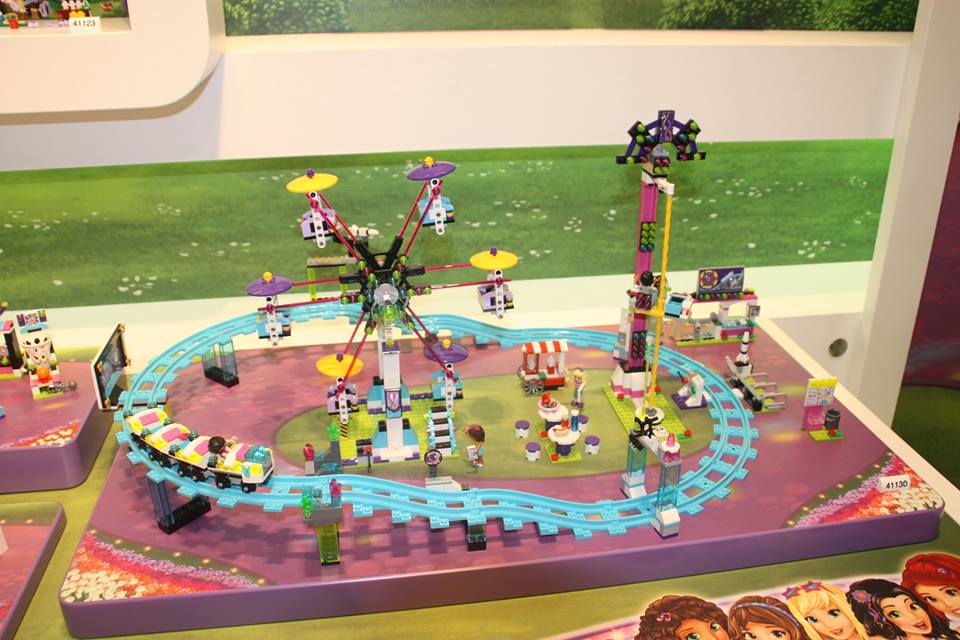 The new Friends Amusement Park subtheme was also on show with the biggest set of the wave being 41130 Roller Coaster. It looks like a really tame roller coaster and I don’t think it’s as bad as other fans have described it. 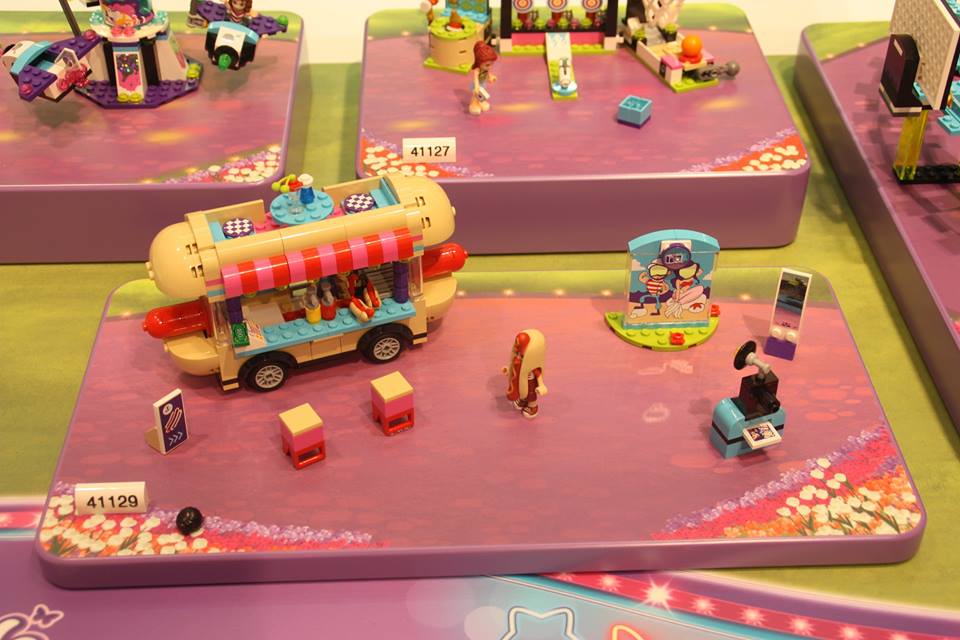 The set that stands out the most from the Friends Amusement Park subtheme is hands down 41129 Hot Dog Stand featuring a brilliant Hot Dog Van AND the return of the notorious Hot Dog Suit that first captured our imaginations in Series 13’s Hot Dog Man.

I also love that we’ll be able to get more of those new hot dog accessories. I cannot wait for this set and it’ll definitely be a day one purchase for me thanks to the absurdity of it all. 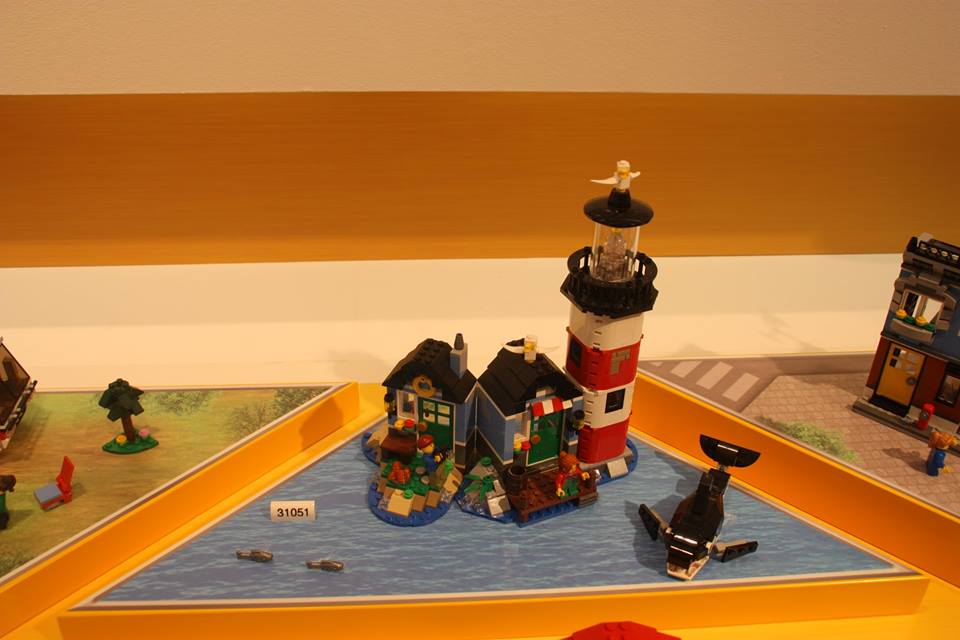 The 31051 Creator Cape Lighthouse set also looks like a potential winner. It does feel like a smaller version of 2011’s Creator Lighthouse Island set but I was very impressed by the brick built whale just hanging around outside the lighthouse. 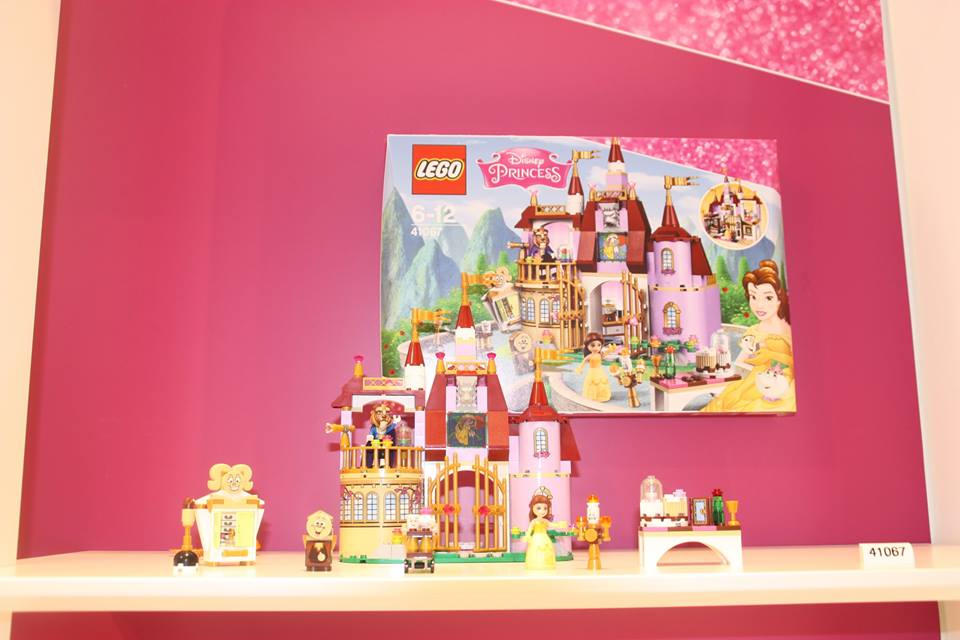 I’m unashamedly a big fan of the Disney Princess theme, so I’m naturally looking forward to 41067 Belle’s Enchanted Castle – featuring Belle, a Beast minidoll and a couple of supporting characters Lumiere and Cogsworth.

The set looks like it’s plastered in stickers which is worrying, but I think it’ll be quite a successful set seeing as how interest in Beauty and the Beast should rise with the upcoming live action movie starring Emma Watson in 2017. 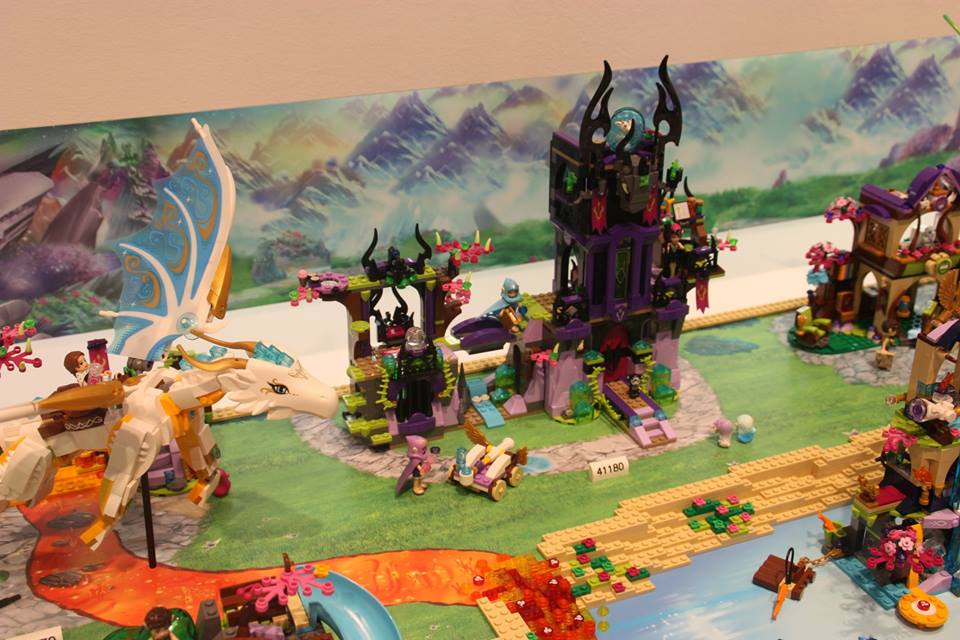 There was plenty of new LEGO Elves on show as well, including this very sinister looking 41180 Ragana’s Magic Shadow Castle. I’m quite glad that we’re getting some antagonists (or at least some really creepy Elves characters) in the world of Elvendale.

The Magic Shadow Castle looks very Malificent-esque, which is awesome. Definitely can’t wait for all the new Elves sets! 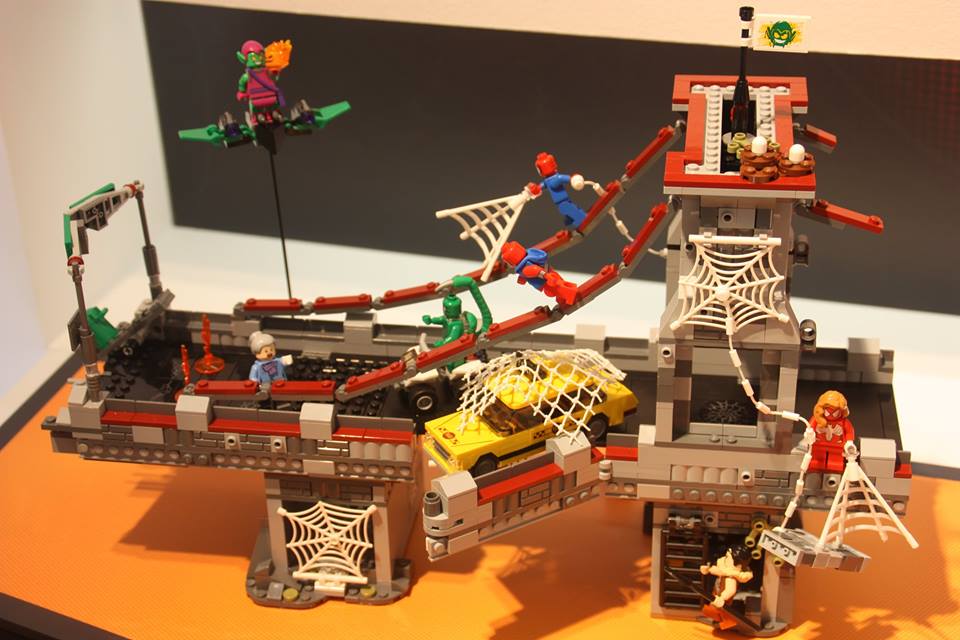 LEGO Marvel Super Heroes fans are in for a treat in the second half of 2016 with the amazing  76057 Web Warrior’s Bridge Battle that features a mind blowing cast of characters – Spider-Man, Spider-Girl, Scarlet Spider, Aunt May, Green Goblin, Kraven the Hunter, Scorpion.

The entire set looks to be a beautiful display piece with plenty of play features built in. Frankly, it’s been awhile since Marvel have produced a large diorama-style set and I think that they’ve nailed it with Web Warrior’s Bridge Battle. 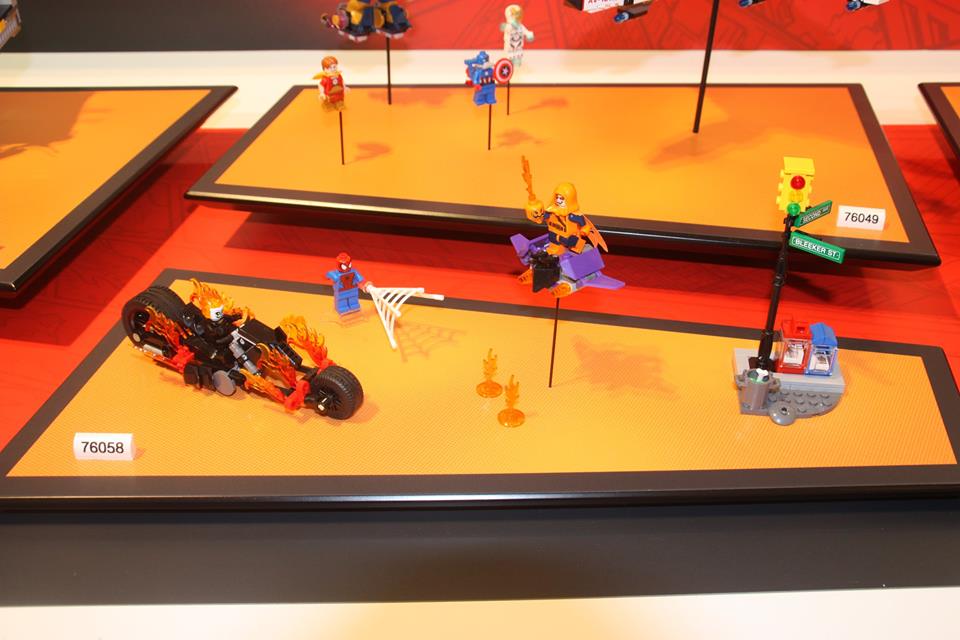 Also featured was 76058 Ghost Rider Team-Up, featuring a long-awaited Ghost Rider minifigure alongside Spider-Man and Hobgoblin. Expect this to be priced at about AU$40 and to be a very popular set with Marvel minifig collectors. 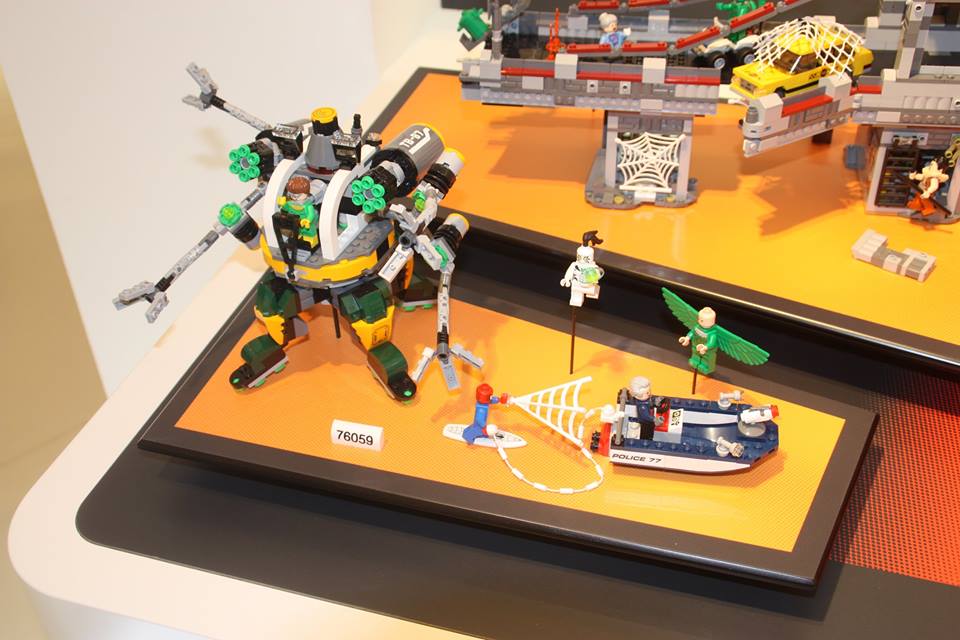 Last but not least is another minifigure-heavy set,  76059 Doc Ock’s Tentacle Trap which has Doc Ock in a ridiculous-looking mech. The set contains Spider-Man, Doc Ock, White Tiger, Captain Stacy and Vulture.

Marvel look to be pushing Spider-Man extra hard in the second half of 2016 – probably to get people excited about the new Spider-Man cameo in Captain America Civil War as well as the new Spider-Man movie in 2017. I’m just glad that LEGO and Marvel have stuffed the sets full of desirable superheroes and supervillains – I just hope that it won’t be too harsh on the wallet. 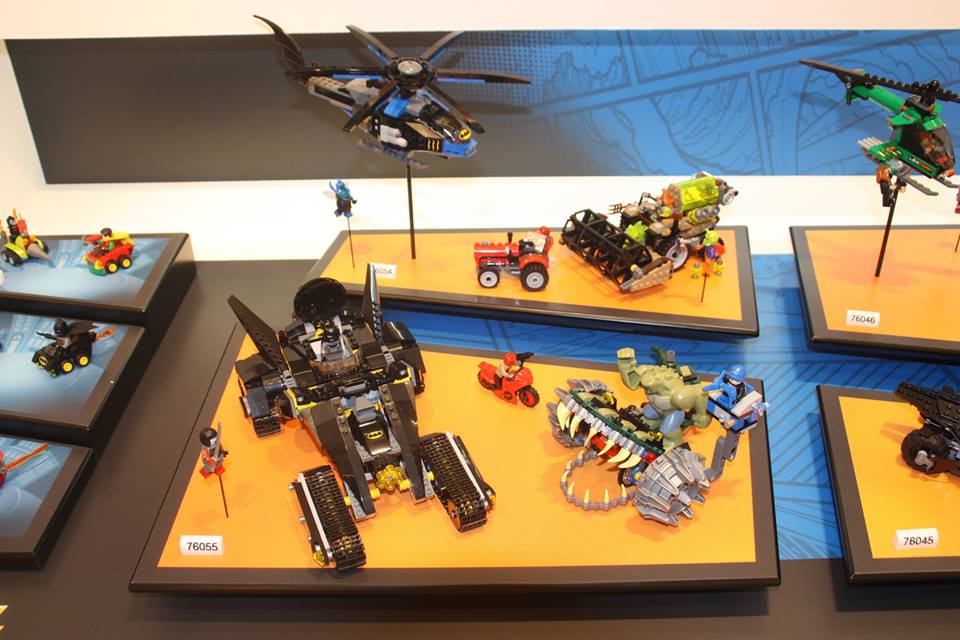 DC had an equally strong showing with 76055 Killer Croc’s Sewer Smash giving us a Killer Croc bigfig and what seems to be some sort of Bat-Tank… It certainly looks like Bruce Wayne has been taking vehicle-building tips from the Ninjago guys.

Above the Killer Croc set is 76054 Scarecrow’s Harvest of Fear, featuring one of my favourite DC characters, Blue Beetle! Scarecrow has an updated look and his harvester looks like a really solid build. Also included is supervillain Killer Moth!

So yeah, these are some of my favourite picks from the Nuremberg Toy Fair and are instant to my 2016 wishlist. There are plenty more photos from the German Toy Fair and I recommend that you check them out on the Promobricks Facebook page for their extensive photos.

Thanks once again to Michael from Promobricks for permission to republish some of the photos!

What are some of your favourite second-half 2016 sets that have been revealed at the Nuremberg Toy Fair? Let me know in the comments! 2016 is shaping up to becoming another very expensive year for LEGO but I’m quite buoyed by all the great sets that have been previewed.

P.S. Apologies for being slightly absent from my blog. In the past week and a half, I’ve had a personal family matter that I had to attend to and I haven’t been able to write much. Expect some new reviews next week when I get back to Melbourne and life returns to normal 🙂