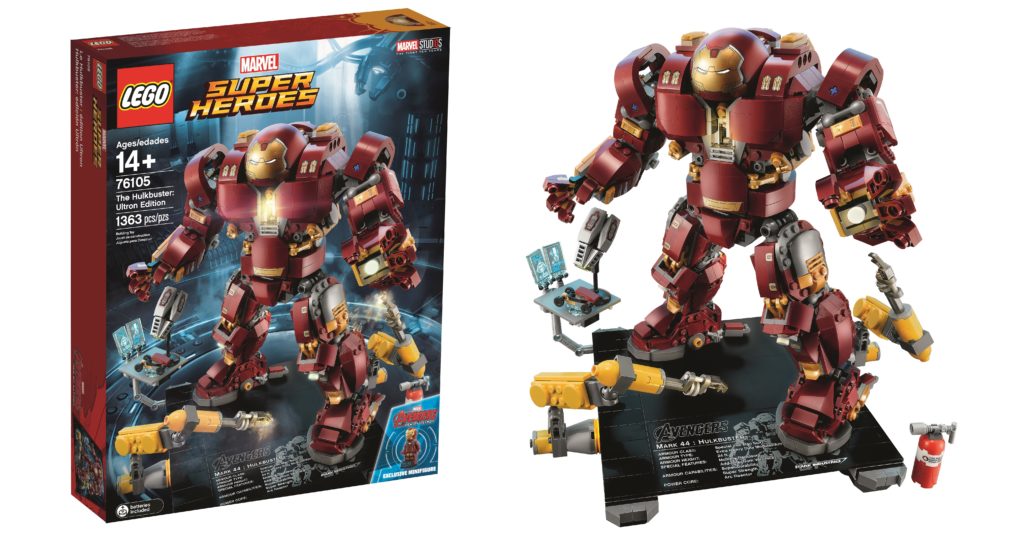 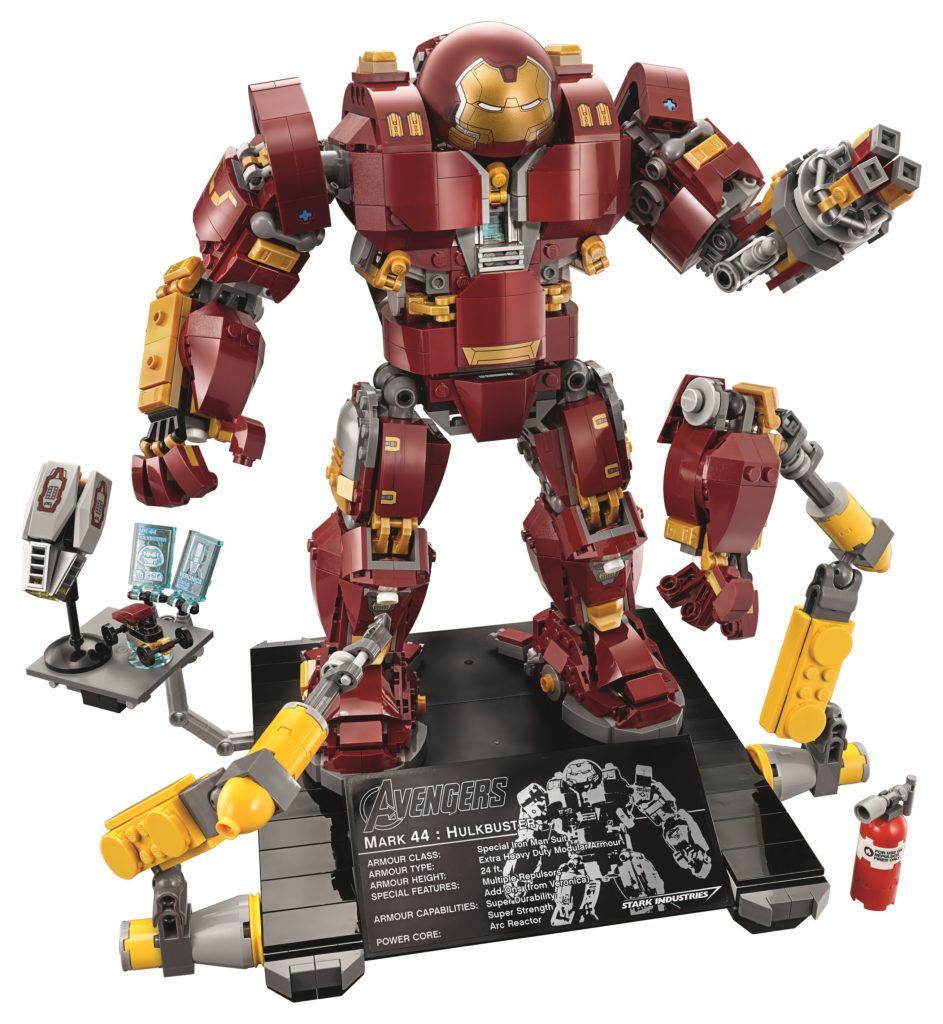 Adding to its appeal as a display set, the Hulkbuster (Mk 44) armour comes with a display platform with alternate attachment points for posable robotic construction arms and a desk, as well as a UCS-style sticker (ugh), with stats of the Hulkbuster armour.

Here is the pricing details of The Hulkbuster: Ultron Edition, with links to LEGO.com product page.

The Hulkbuster: Ultron Edition’s release date is slated for Saturday, 3 March 2018 and will be available from LEGO.com, and LEGO Brand Retail Stores.

Here’s a look at the back and front of the box. It looks mostly the same as regular LEGO Marvel Super Heroes sets (which it kinda is), but it would’ve been nice if it had a much more distinctive box design to up the collectibility aspect of the set.

One of the set’s features is the inclusion of a light brick, allowing you to illuminate the arc reactor in the chest by pressing a button on the Hulkbuster’s back. 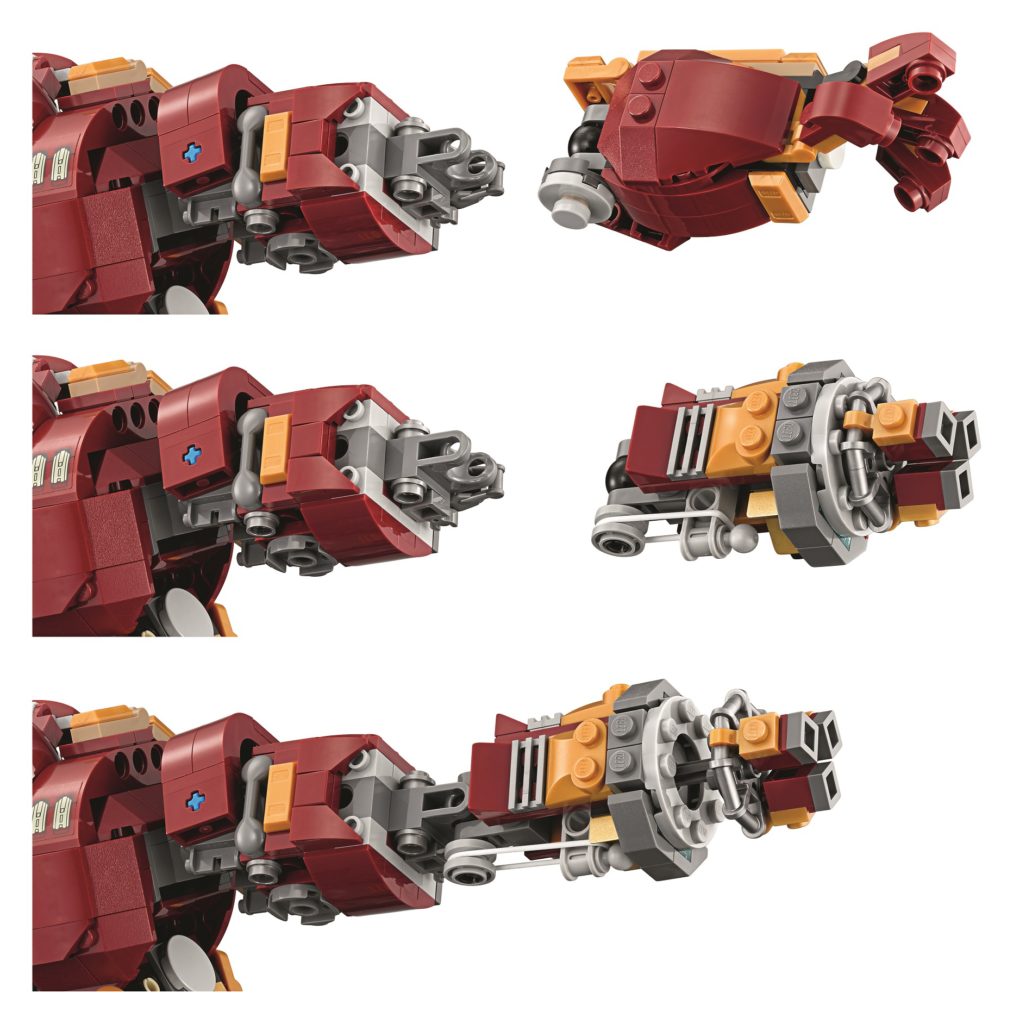 One of the main features of the Hulkbuster armour is the 2 interchangeable left arms, a standard arm or jackhammer arm with punching function just like the movie where Tony Stark pummels The Hulk’s face into the dirt.

Really cool that they added this piece of functionality in, and I’m really curious to see how it works in real life. 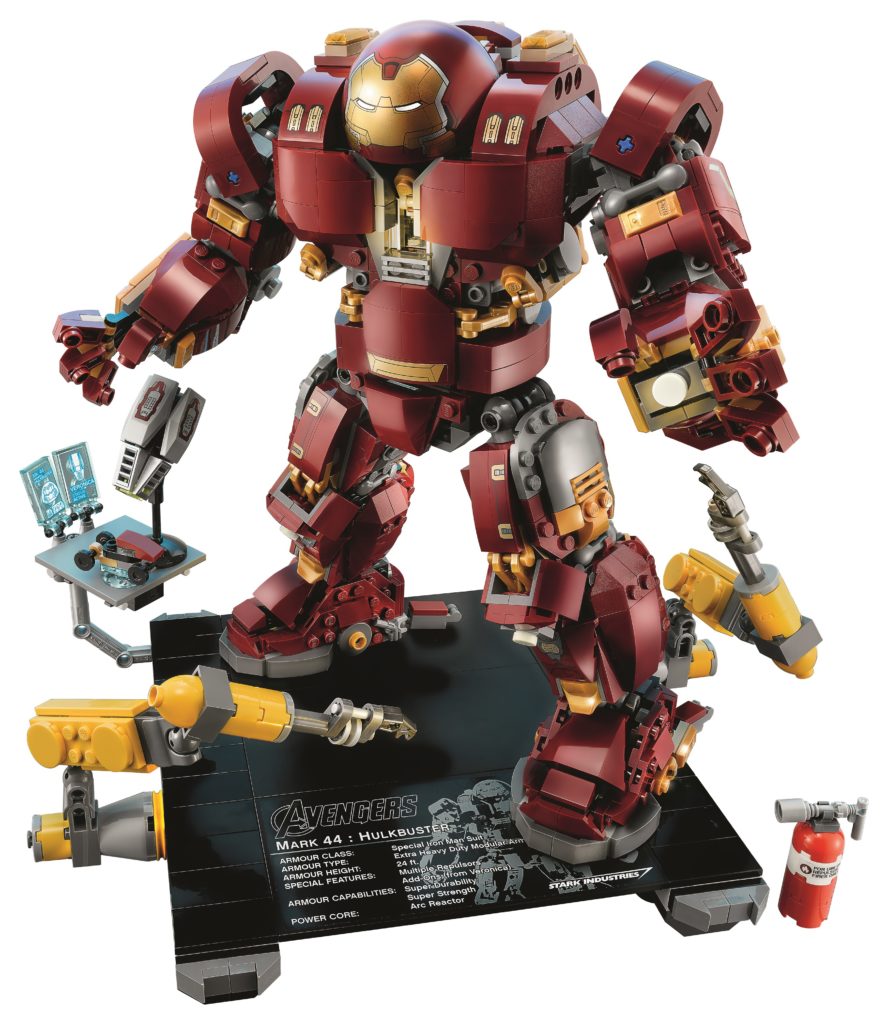 The Platform adds to the displability of the set and features a flip-up Hulkbuster information plate, plus 8 alternative attachment points for 2 posable robotic construction arms and a desk with 2 attached computer screen elements and space for the buildable hotrod car and buildable Veronica satellite (that deploys all the attachments and plates). 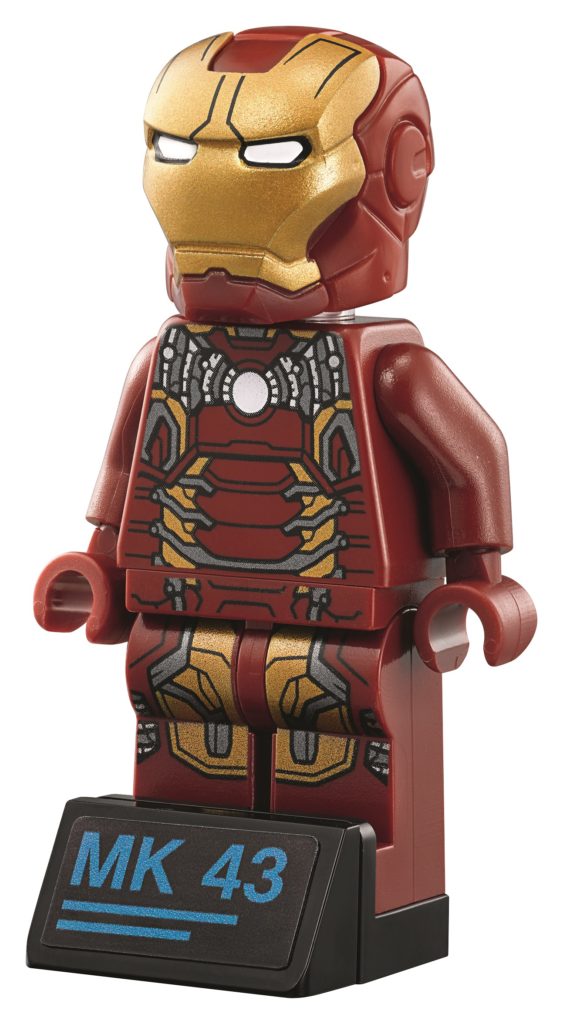 Included in the set is an exclusive Iron Man MK 43 minifigure, which is a little confusing as we have had MK 43 armours before, most notably in the Hulk Buster Smash set. From what I can tell, there are just minor details on the torso (the silver bits around the arc reactor) that are new.

This particular minifigure doesn’t look anything like the Mk 43 suit from the movie, so it’s a bit of an odd decision by LEGO as I felt that the previous minifig was more than adequate. A Tony Stark with arc reactor in casual-wear would’ve been a much better choice, IMHO. 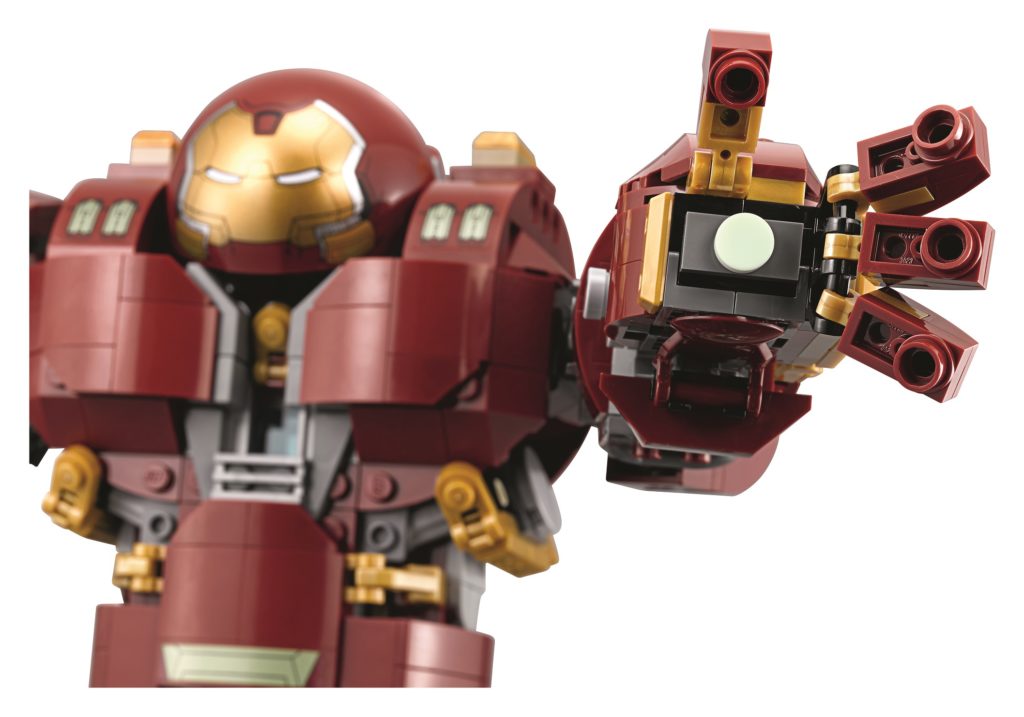 The Hulkbuster also features glow in the dark elements across the suit, most notably for his repulsor gloves. 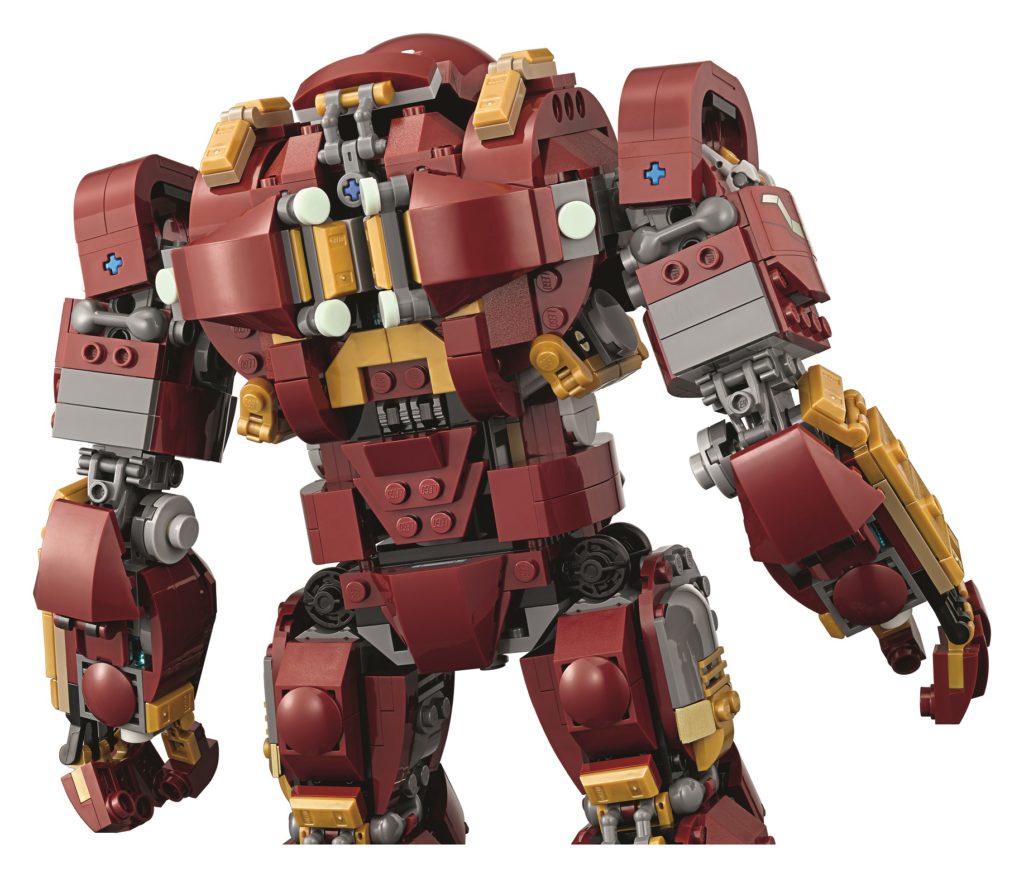 I was also very happy to see that the back packs a ton of detail, and looks really good. 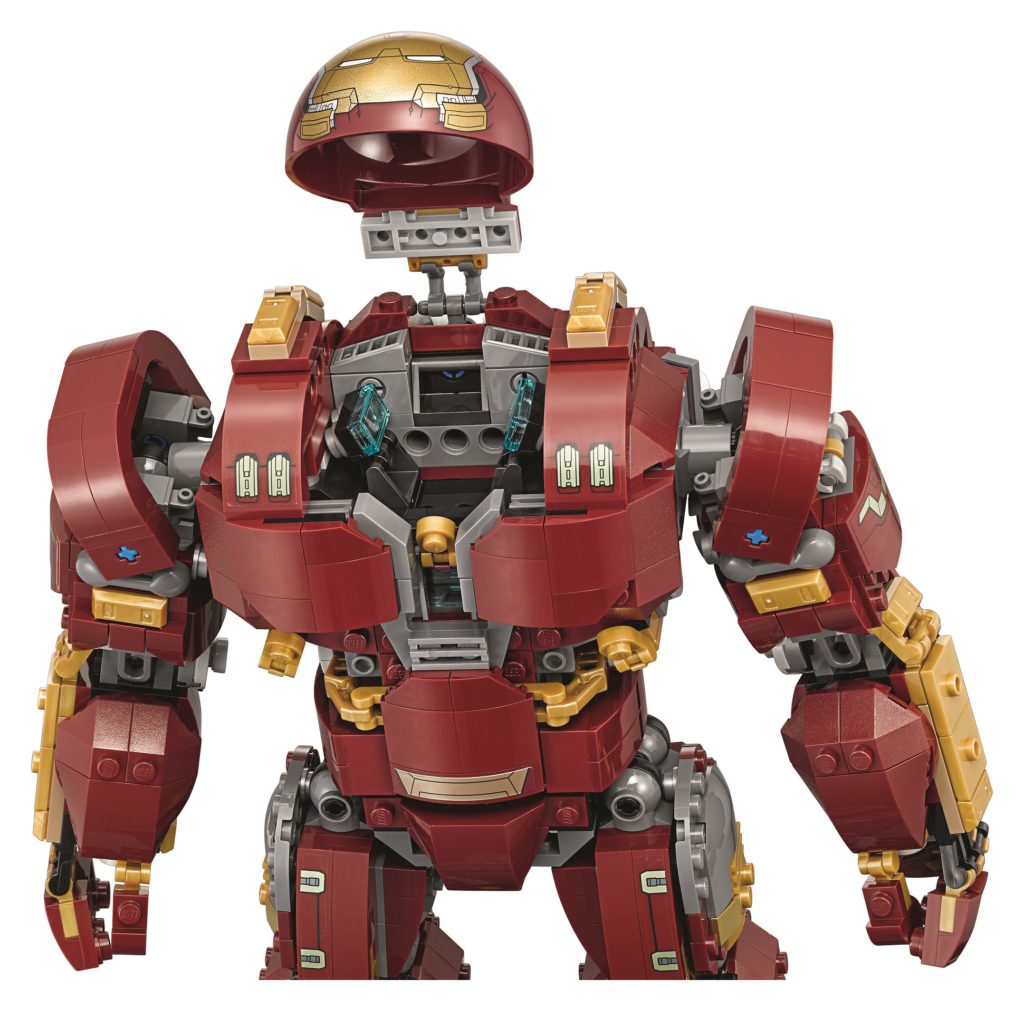 So… I have a few issues with the set. Let’s not go into the plethora of stickers that adorn the set because that really gets tired after awhile.

The overall shape of the Hulkbuster Ultron Edition just doesn’t seem right to me. I can’t quite pin it, and I’m not sure if this is purely because of the official photos, but it looks a bit too skinny to me. 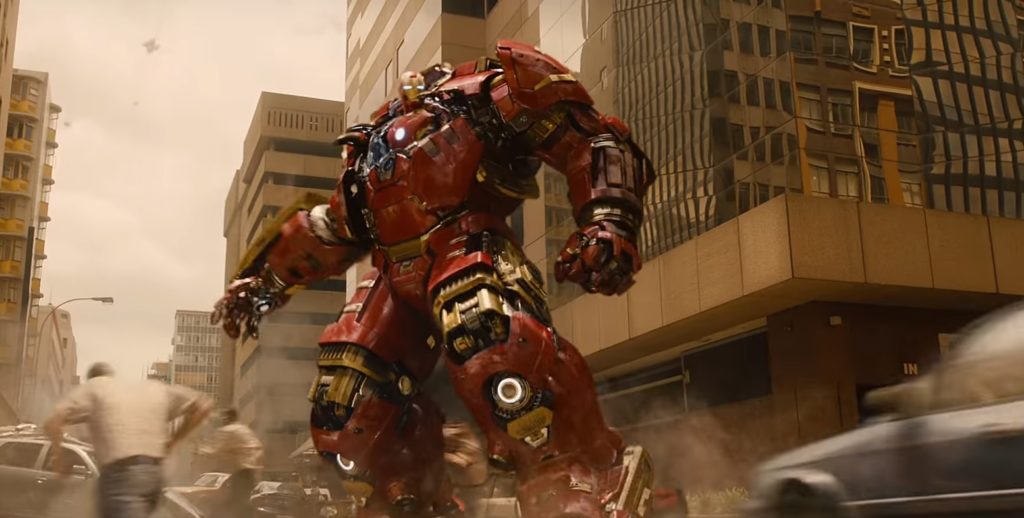 The Hulkbuster from Age of Ultron is everything you expect from a Hulkbuster armour. It’s a massive, hulking, chunky mech, designed to take on The Incredible Hulk. 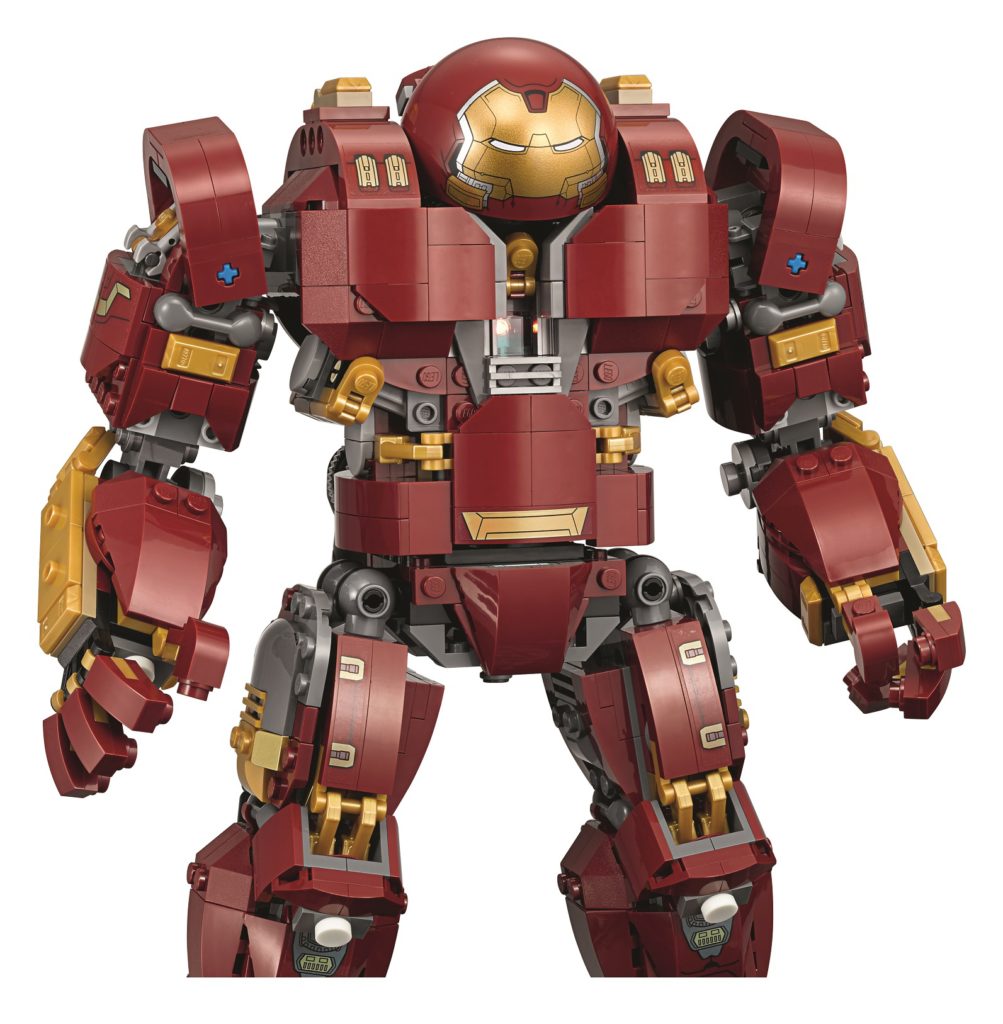 The proportions of the set are just a little off to me. I understand the limitation of designers who have to work with the current library of elements, and the inherent challenges of LEGO itself, but I am not a fan of how it looks at all.

The waist and chest is just too skinny and small for me, and the legs are also too narrow.

I don’t know why LEGO skimped on this set, as I feel like it could’ve benefited from a bigger piece-count, so that they could pack it with more elements and make it look chunkier, like in the movie.

It’s also missing the large shoulderpads which is a bit of a shocker. The domed helmet is also a bit too large in proportion with the rest of the body, which is what I think contributes to just how imbalanced it looks. If you compare it against the movie version, the head is tiny in comparison with the body. 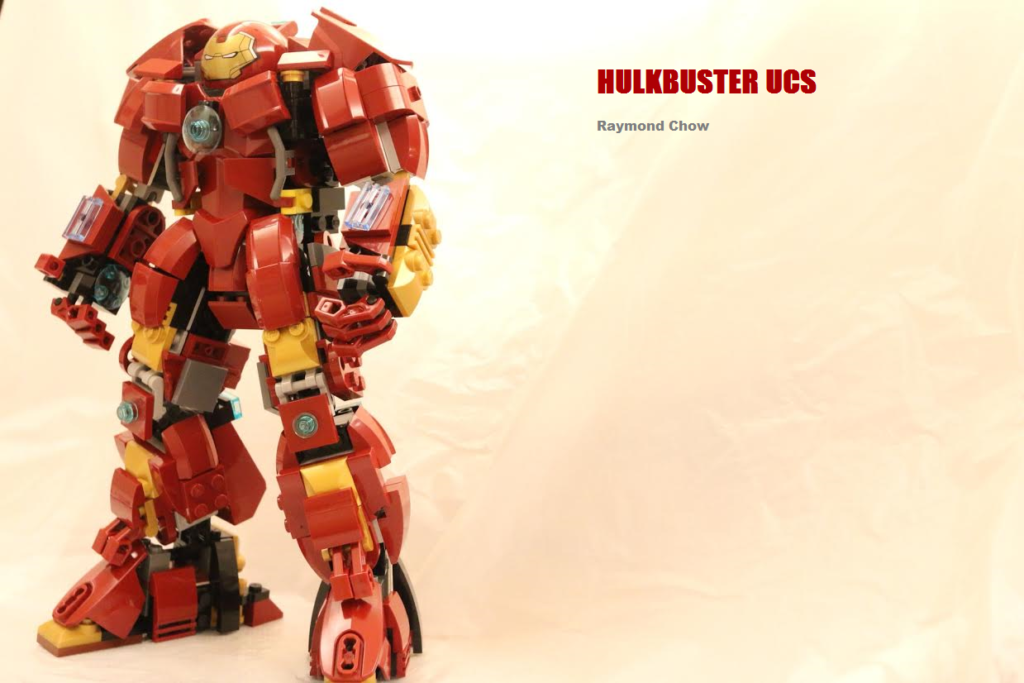 There are also going to be inevitable comparisons to UCS Hulkbuster set on LEGO Ideas that didn’t make it through the review stage. Call me crazy, but the LEGO Ideas one looks so much better in comparison, mostly because the proportions are much more accurate to the movie version.

I’m not normally this nitpicky, but if you give something a UCS treatment, expect it to be judged far more critically than a regular retail LEGO set.

The second weird thing about the set is the fact that it’s based on Age of Ultron, which is a 3 year old movie. I understand it’s the first appearance of the Hulkbuster, but I am puzzled as to why they didn’t tie this to Infinity War instead, which has a brand new Hulkbuster and is so much more relevant.

Feels like a weird oversight that we get a smaller version in the theme instead. No one was crying out for an Ultron version, but a huge, supersized Infinity War Hulkbuster would’ve been a much smarter choice to get people excited.

And even if the price is a little higher (which I would gladly pay), I would’ve have mind, as long as the set looks awesome.

That said, I’m still curious about the set and quite excited about the idea about a massive Hulkbuster set. I loved the smaller Hulk Buster Smash version so much that I gave it a rare 5/5 in my review and it’s one of the few sets that I still have on display.

Anyway, I hope these issues are just because it looks weird in photos and I hope that the set is a lot more impressive when you build it. Can’t wait to properly review this one once it becomes available!

What do you think of this set and the design? Are you excited for it or will you hold out for real photos of it before you pull the trigger.