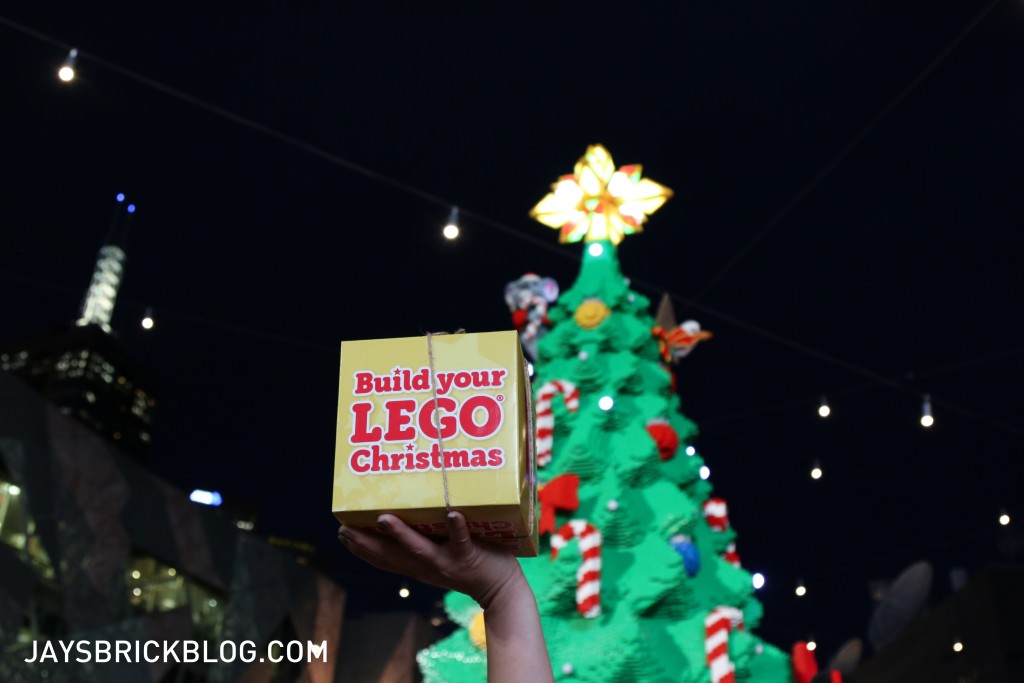 This has been a pretty great weekend. I finally got to visit the massive LEGO Christmas Tree at Federation Square, Melbourne and it was every bit as awesome as I expected it to be.

I was pretty bummed that I wasn’t able to attend the launch on the 27th of November as I was overseas for a wedding but hey, better late than never! I actually visited the LEGO Christmas Tree twice, once on Friday night and once again on Saturday for a LEGO Instagram event (blog post coming soon!) so I could get photos of the tree during the day and at night when it was lit up.

The LEGO Christmas Tree will be standing tall at Federation Square till Sunday, 27 December 2015. 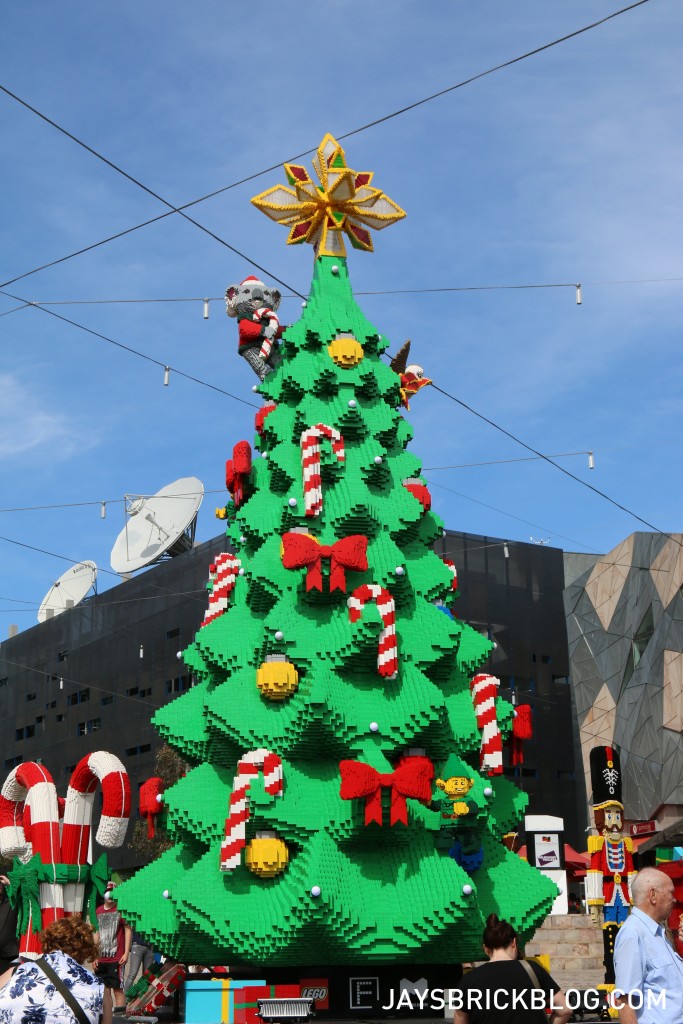 The LEGO Christmas Tree is quite the spectacle and the photos just do not do it justice – if you’re based in Melbourne or making a trip here soon, I highly recommend going to check it out in person. 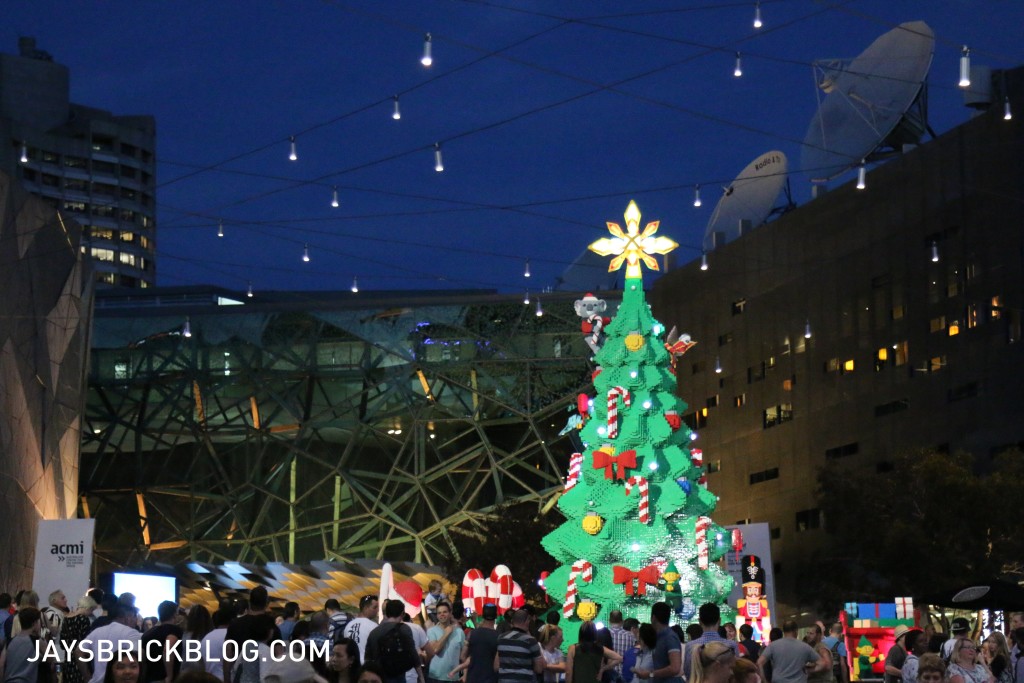 The size and scale of the brick-built tree is amazing to behold, and just watching the crowds of people around the tree taking photos, smiling and being delighted by the LEGO tree is an essential part of the entire experience.

Although this is essentially the same Christmas Tree as the one that first made its debut in Sydney last year, LEGO Australia have gone out of their way to jazz up the towering LEGO Christmas Tree. 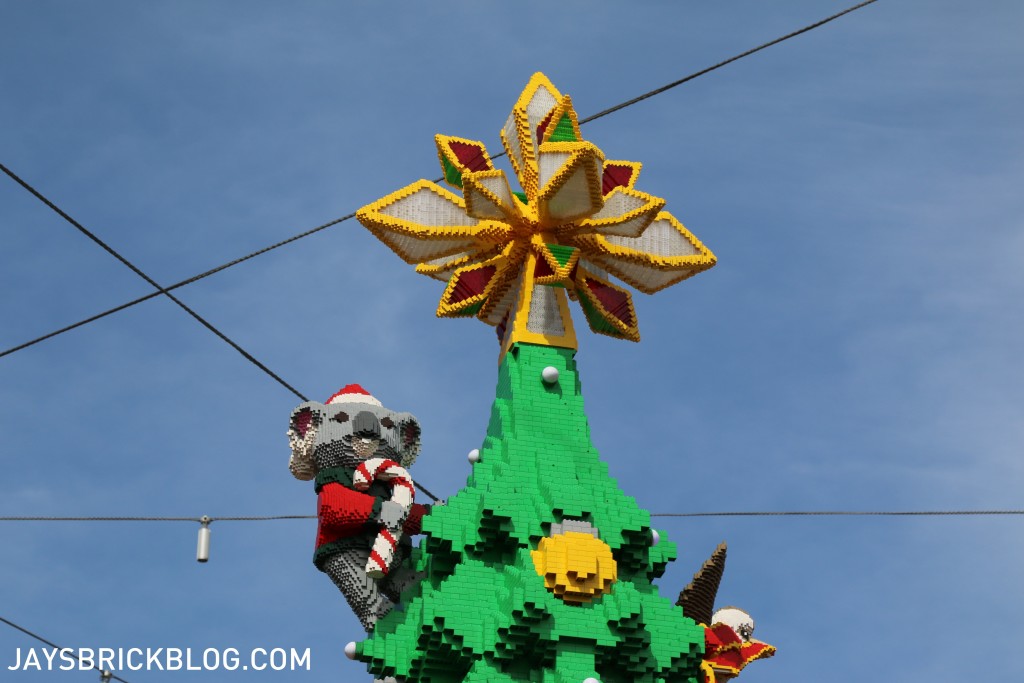 LEGO Master Builder Chris Steininger and his family (read my interview with him here) added a special touch to the Christmas Tree by designing a dazzling new star – it’s made out of 13,195 LEGO bricks and twinkles with the power of 3,456 LED lights making it the ultimate tree-topper. 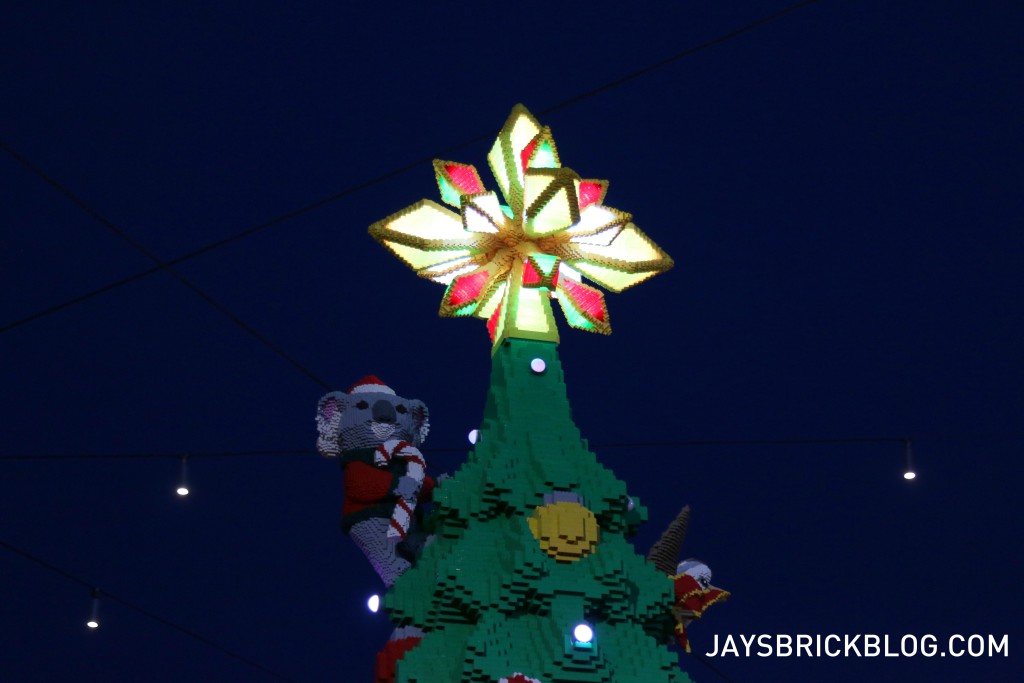 The Christmas tree star looks amazing both during the day or at night, but for best results, I suggest going to see the tree at sundown as it truly shines when it’s all lit up.

Watch the stop motion video to see how the star was constructed below! 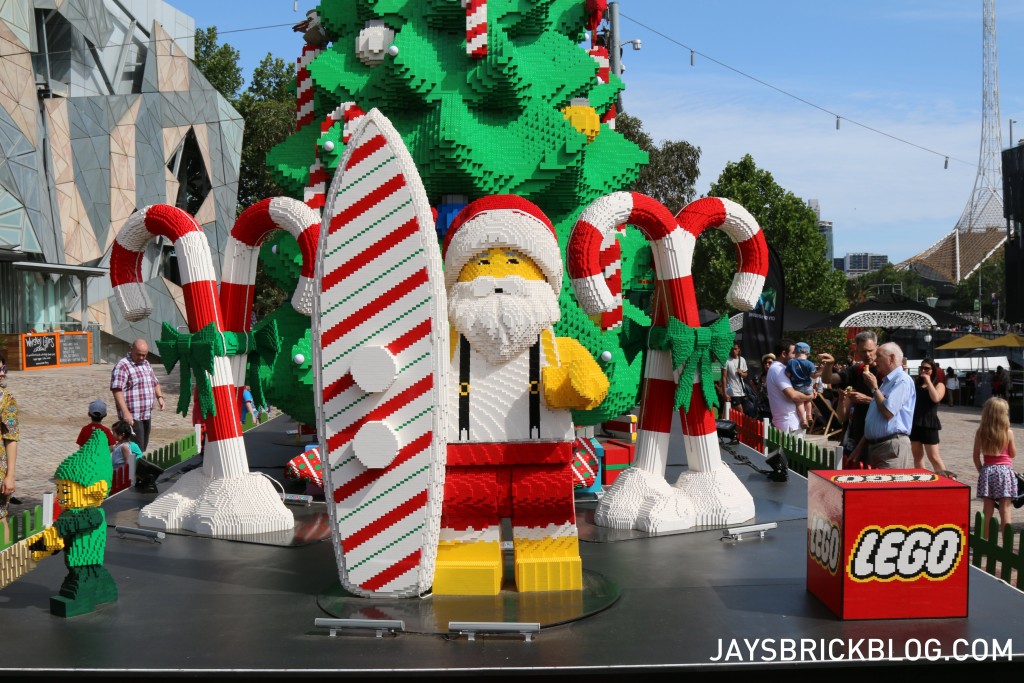 Here are some fun facts about the record-breaking LEGO Christmas Tree:

Apart from the star, Chris Steininger and the LEGO team have also added some Australian icons to the Christmas tree this year which made it a pretty fresh experience for me despite having already seen the tree in Sydney last year.

If you’re going to Fed Square to check out the tree, be sure to look out for: 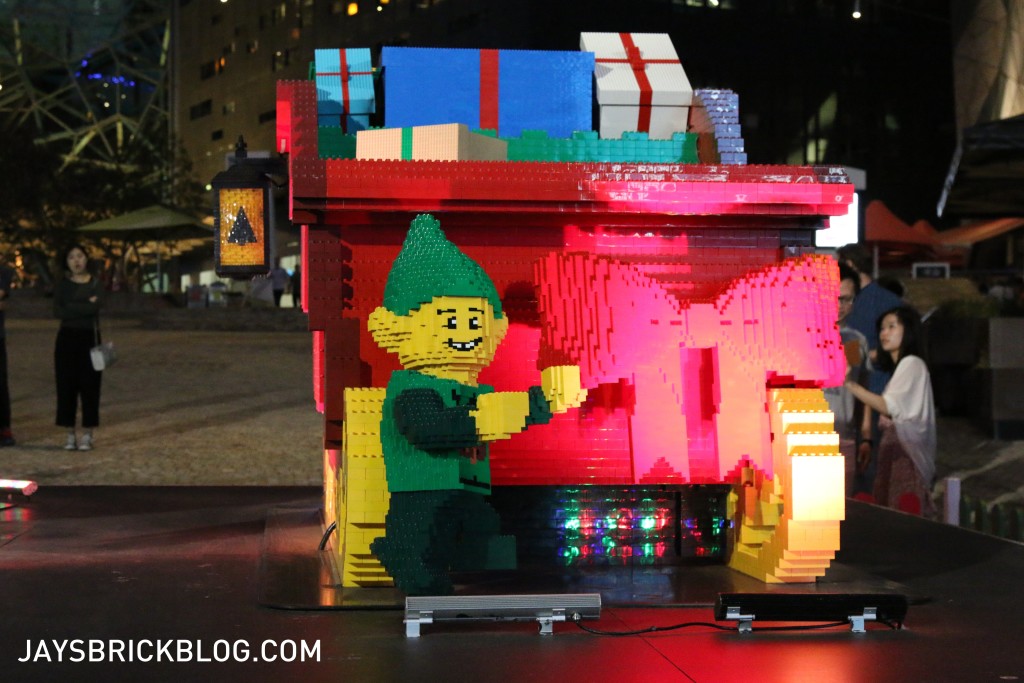 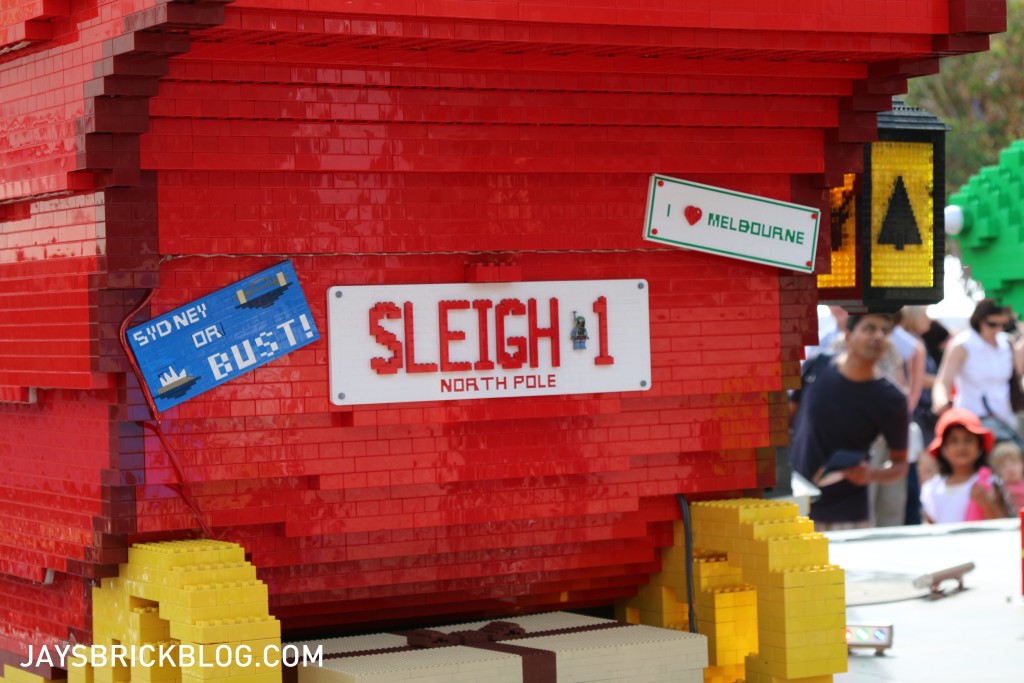 Be sure to check out the brick-built Santa Sleigh’s registration plates which has a tiny Boba Fett placed there as well as the clever Sleigh 1 plate (Boba Fett’s ship is called Slave 1) play on words. The I <3 Melbourne signboard is also new. I’m surprised they kept the Sydney or Bust sign! 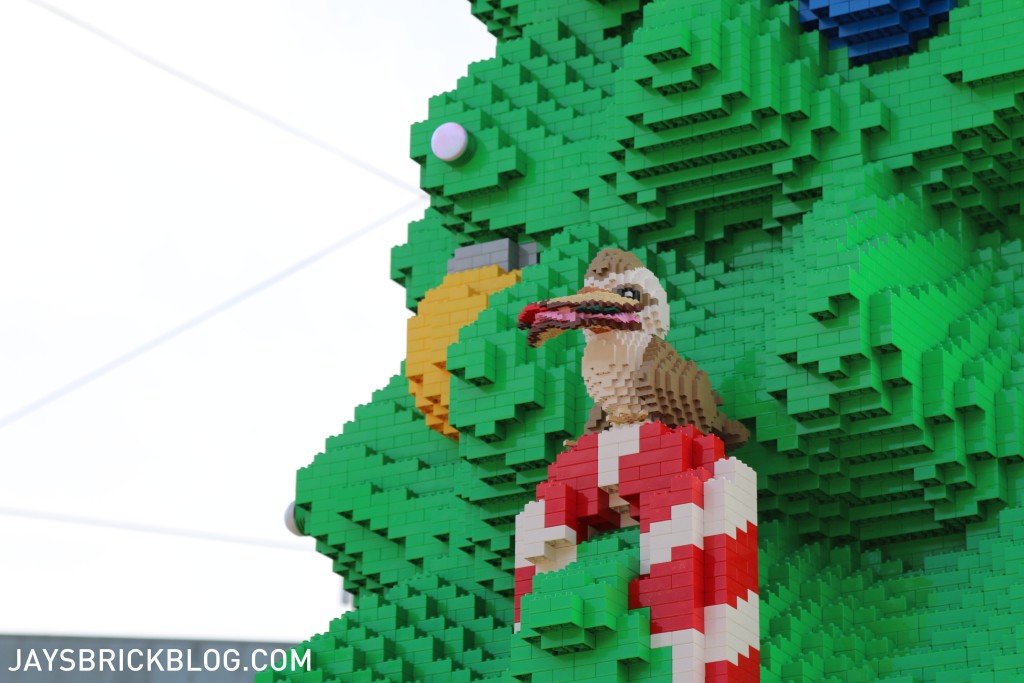 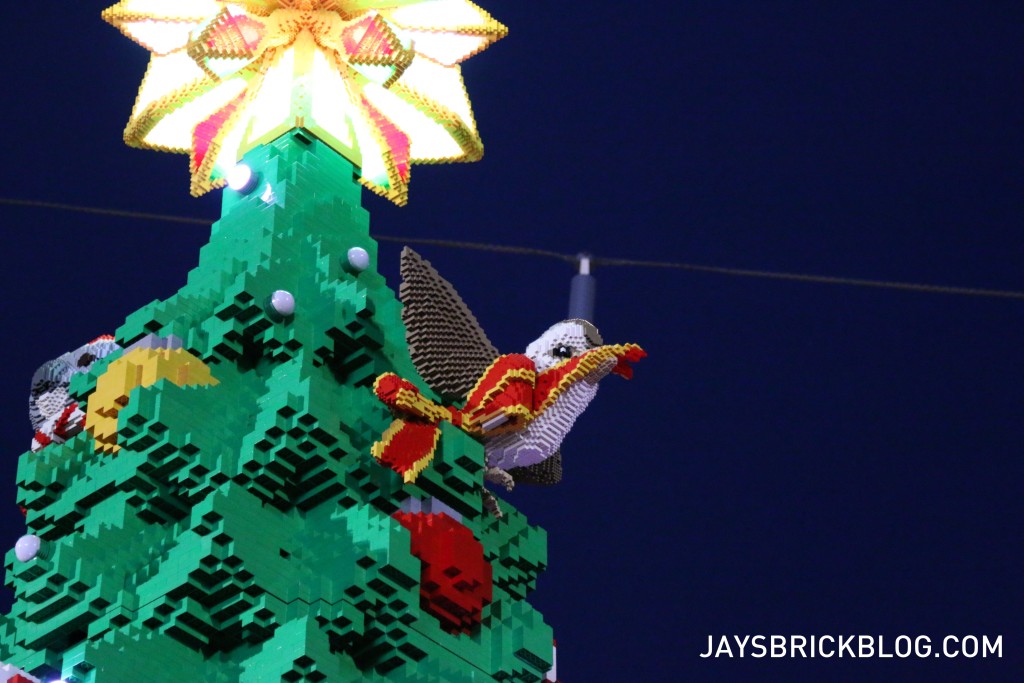 These mischievous kookaburras are a new addition! 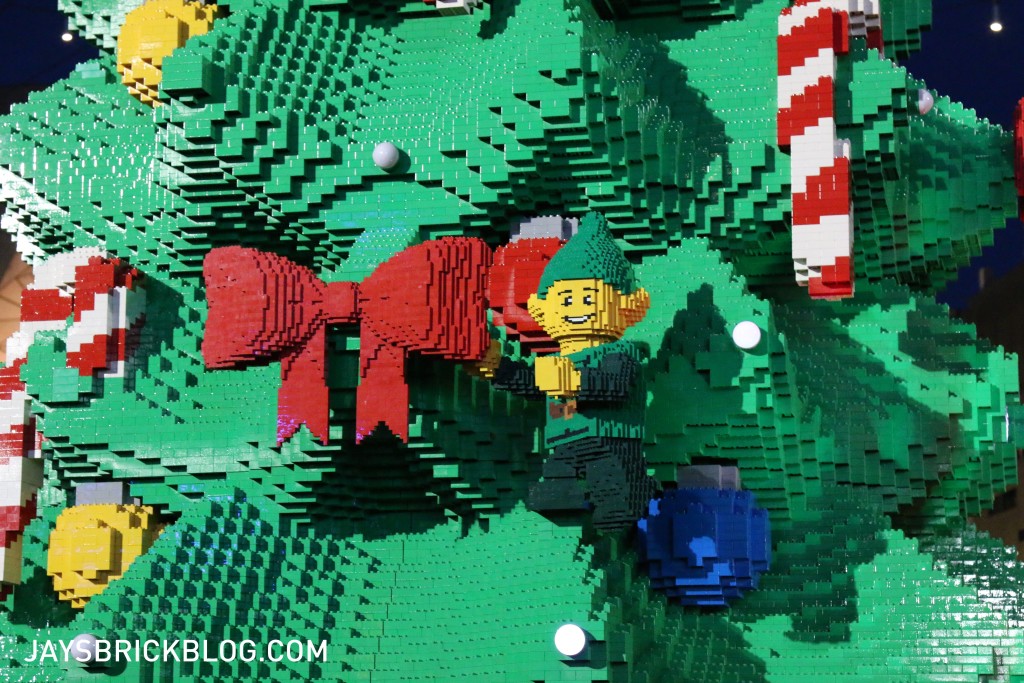 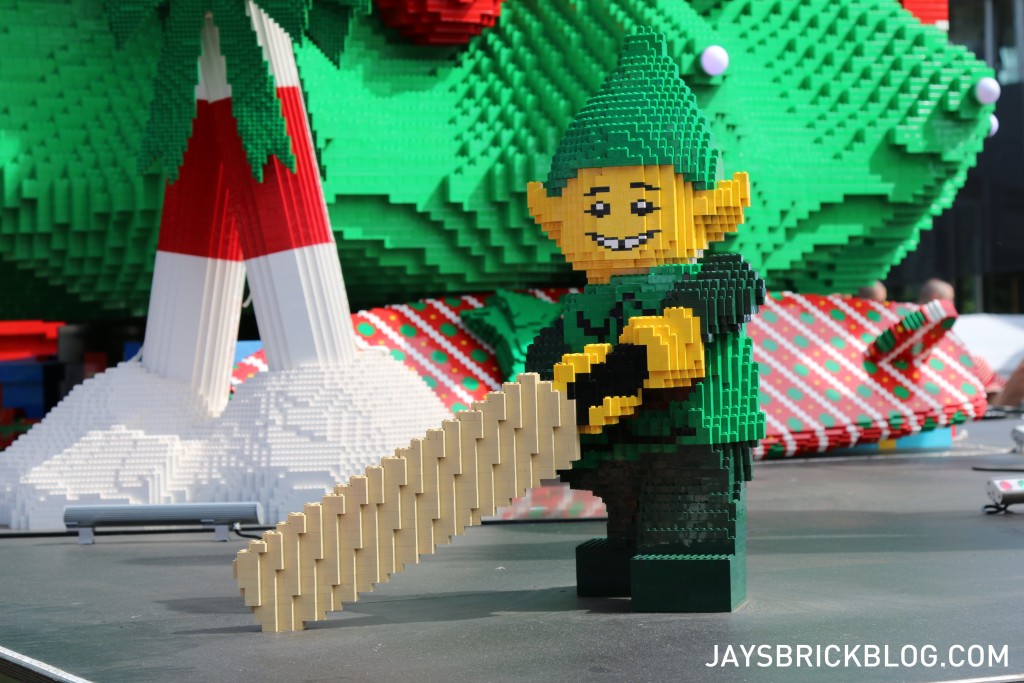 The Cricket-bat wielding elf is one of my favourite additions this year. 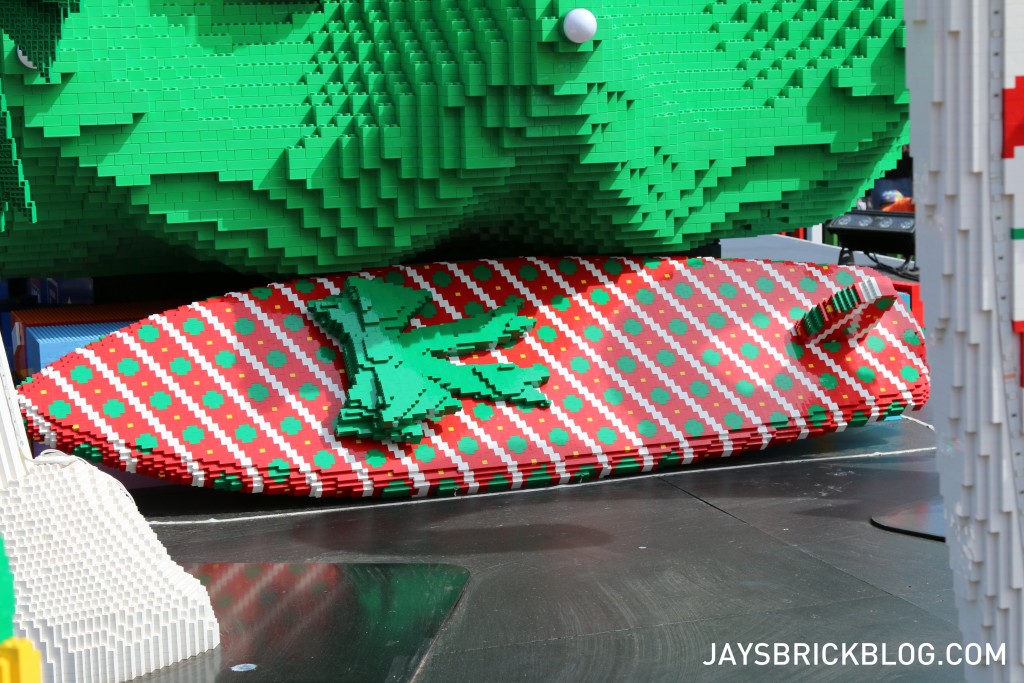 Another fascinating addition this year are Australian/Summer-themed wrapped Christmas gifts scattered around the base of the tree. There’s a surfboard. 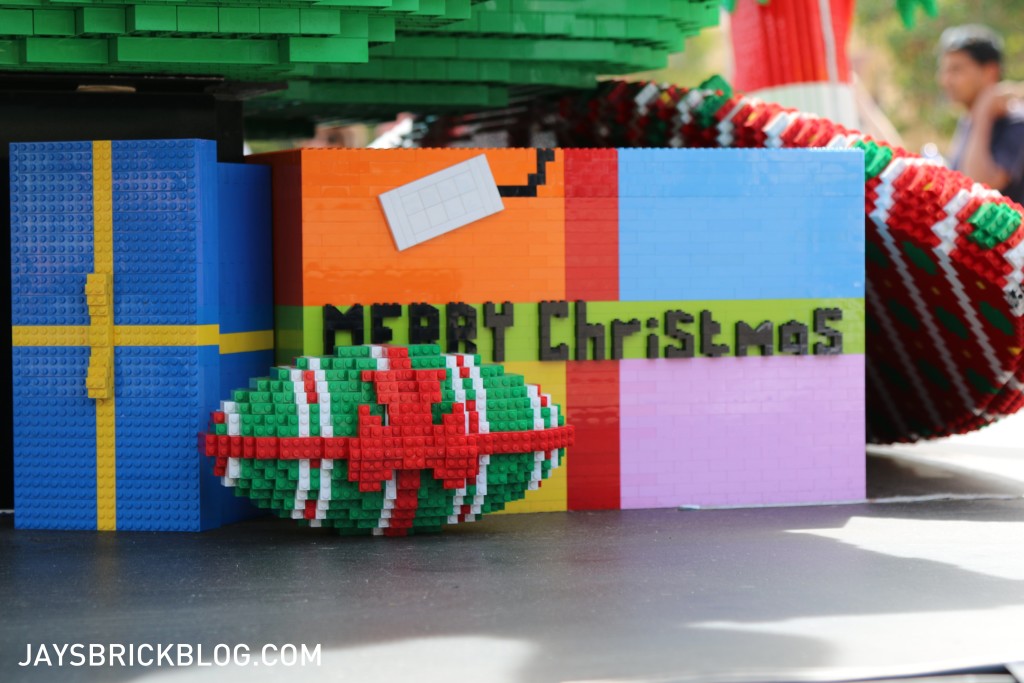 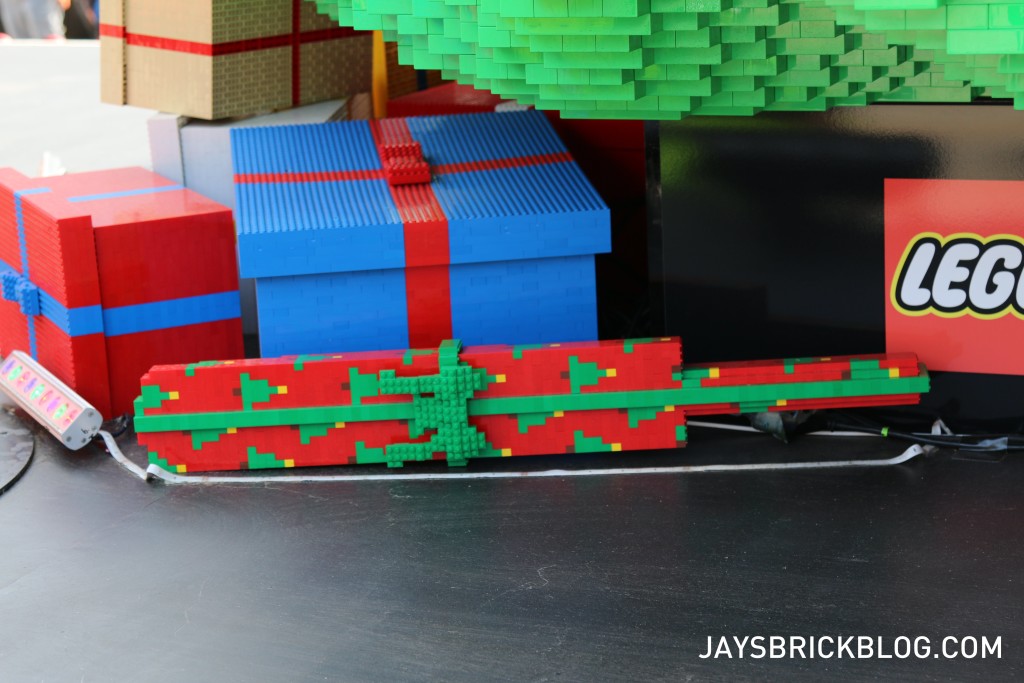 And a cricket bat!

LEGO Australia and Fed Square have also put together a couple of free events for visitors to the tree.

On Saturday 13and 20 December, fans of all ages can participate in “LEGO Christmas Decoration Build” from 10am to 3pm (or until bricks run out) at The Square. Visitors can build their very own LEGO decorations to take home in this festive workshop that’s perfect for the whole family.

OH and if you’re visiting, be sure to visit The Shatter gallery at The Atrium to check out some really cool LEGO Christmas creations that were put together by the Melbourne LEGO community. It’s a little out of the way of the Christmas Tree and it took me awhile to find it as a few security guards I asked didn’t seem to know where the Atrium is. 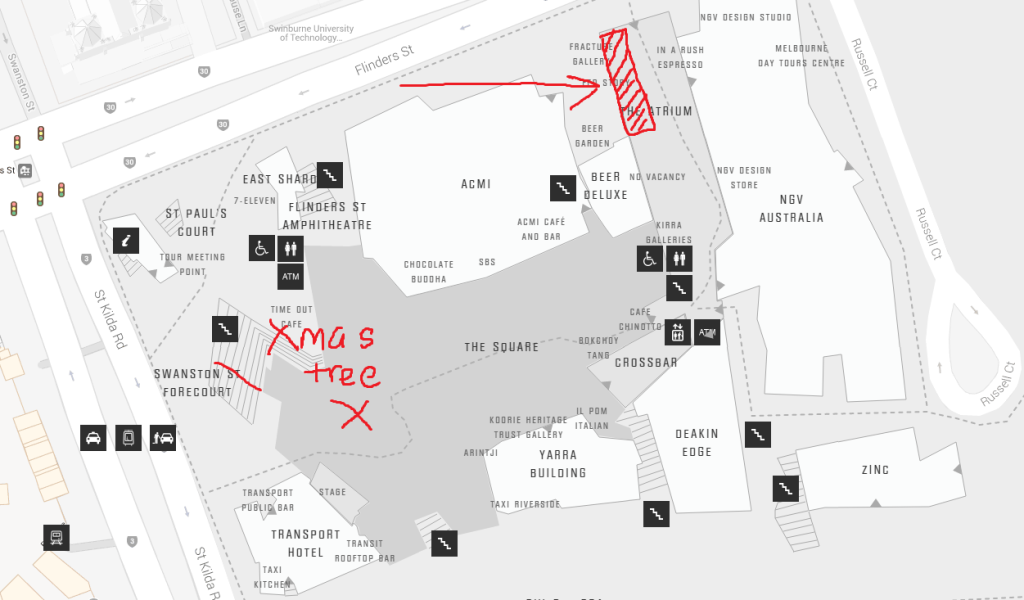 I’ve cobbled this map to illustrate where the LEGO gallery is. 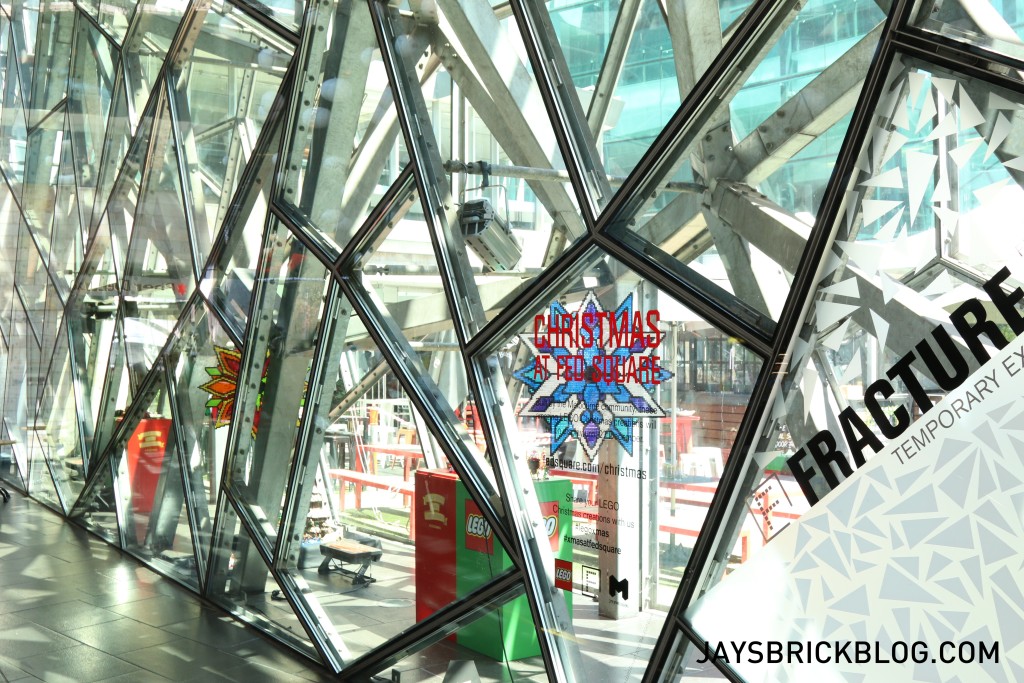 It’s quite small but there are some pretty cool LEGO MOCs and designs on display. I recommend visiting during the day as it’s quite dark at night and you can’t get a good look at most of the designs. Perhaps the folks at Fed Square can consider adding some lighting for those visiting at night? 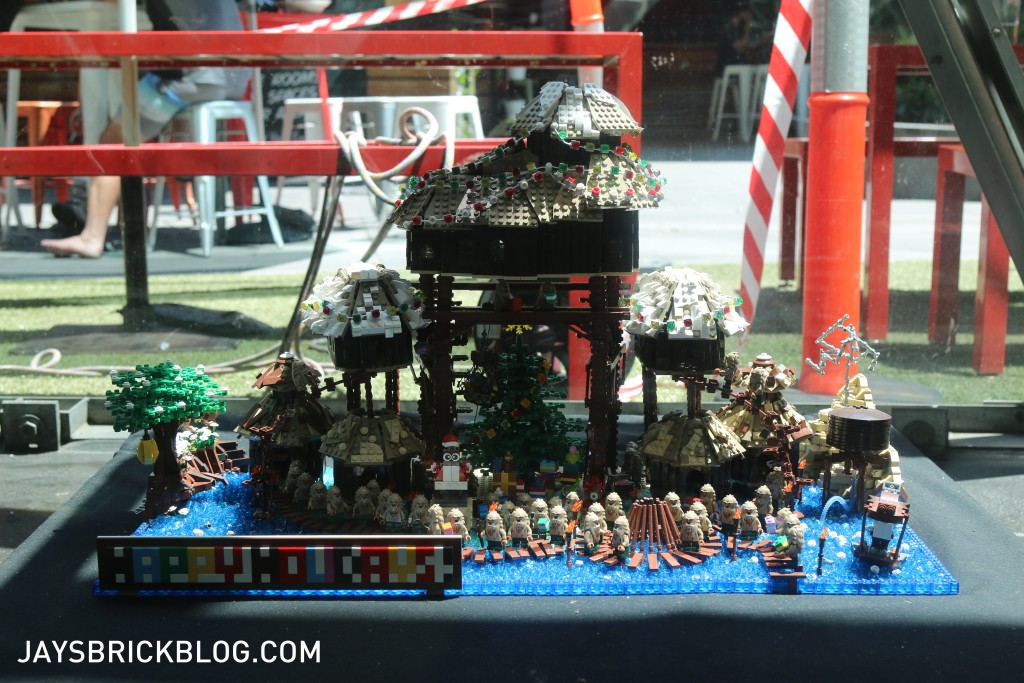 There are some outstanding designs such as this MOC which I’m going to call Beavertown since it’s infested by Beaver minifigures from Chima. Very very cute. 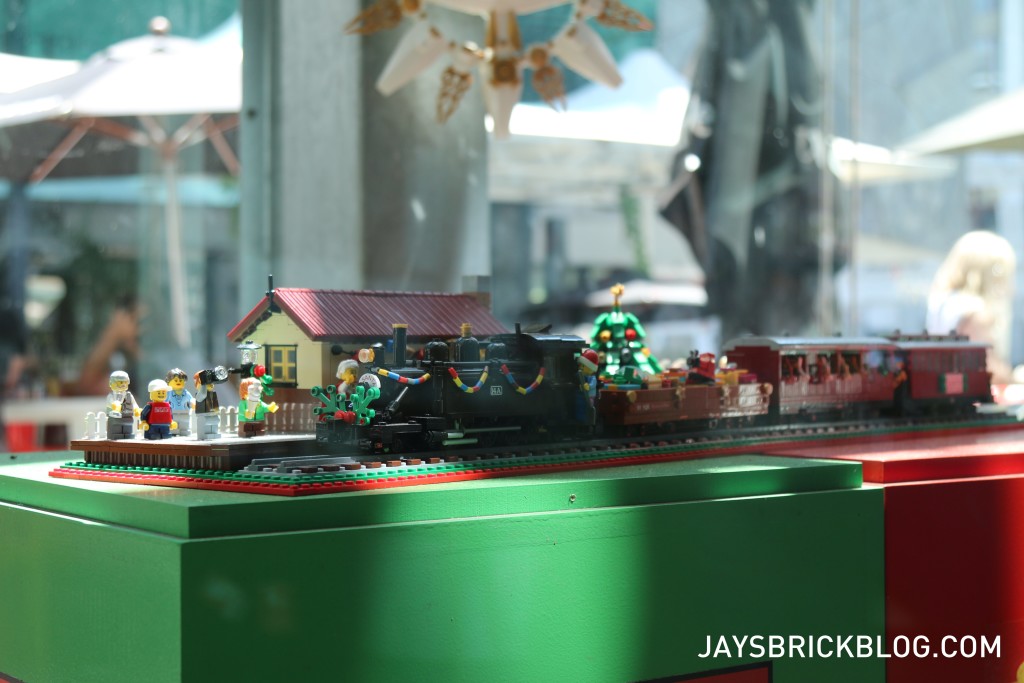 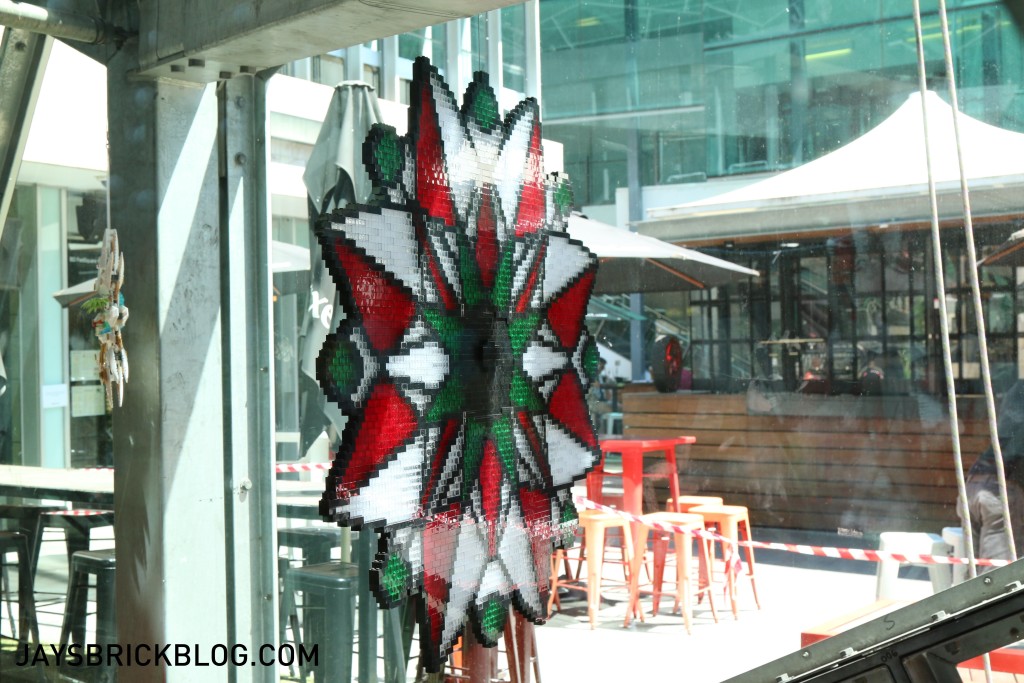 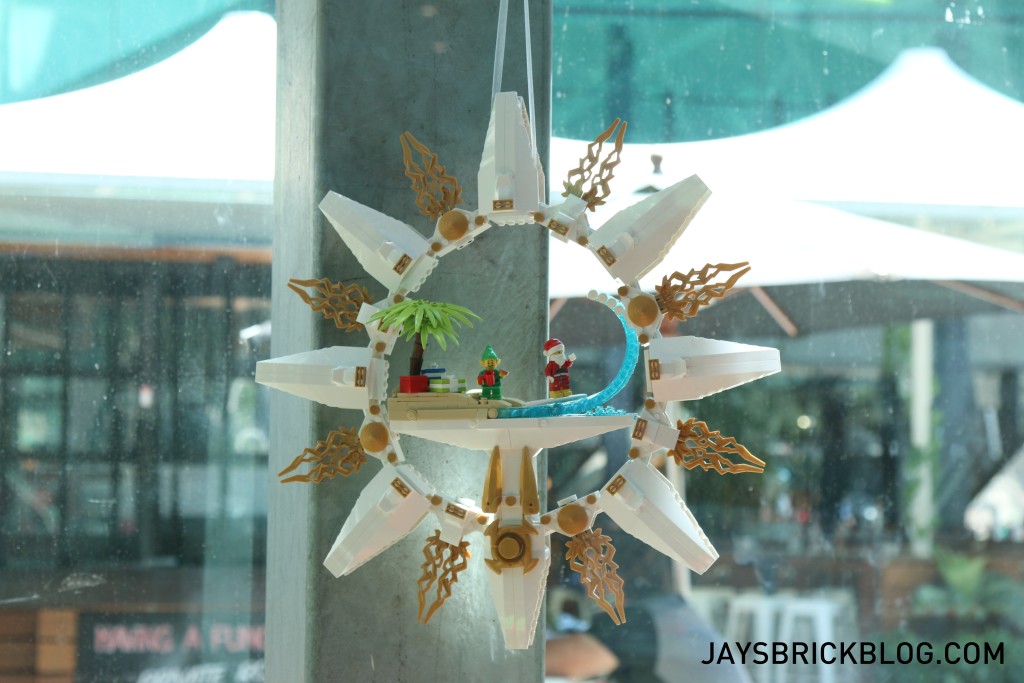 Throughout the fracture gallery, there are some amazingly designed hanging Christmas ornaments. My favourite has to be this white and gold number with the surfing Santa Claus. I believe this design was submitted by Instagram user @frostbricks. 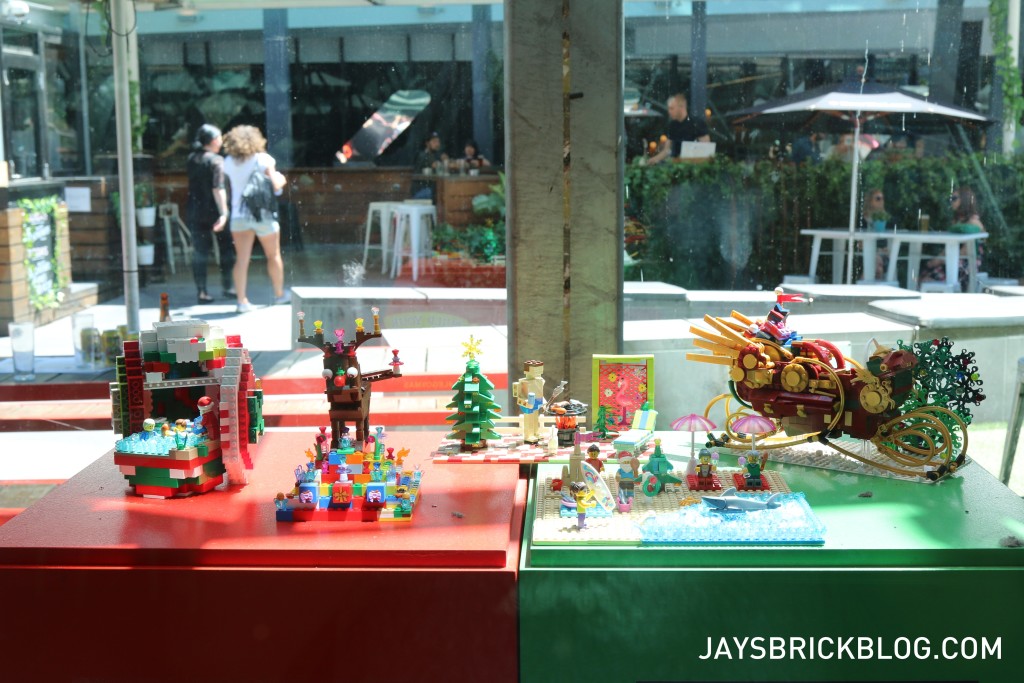 The lighting was all over the place and I’m not too happy with how the photos came out. Check out the insane Santa’s Sleigh on the right.

So that wraps up my on-ground report from the Fed Square LEGO Christmas Tree. I’m absolutely delighted that LEGO Australia brought the tree to Melbourne and I may be a little biased but I think this year’s location is a huge improvement over Pitt Street Mall as it was quite narrow and packed, whereas Fed Square has plenty of open spaces to admire the tree from all angles.

If you live in Victoria or planning a visit, you should definitely make it a trip to go check it out – it’s an amazing experience to see it up close and personal. Photos are good and all but it doesn’t compare to seeing it in person.

Oh and one of my favourite things about the installation is the video screen near the tree which features some outstanding LEGO submissions from Instagrammers all over the world. There’s even a special video made by @cheepjokes and @TheShortNews and Christmas jokes and comics put together by @llworld and @brett_wilson.

To celebrate the biggest LEGO Christmas Tree in the southern hemisphere coming to #fedsquare, we’re hosting a photography competition from now until 27 Dec! Share your best images of LEGO at Fed Square using the hashtag #xmasatfedsquare and you’ll be in the running to win prizes + have your pics featured on the Big Screen ?  More info here: http://bit.ly/1XjNQ5f

If you’re on Instagram you can get your photos featured on the big screen by using the hashtag #xmasatfedsquare and there are prizes to be won! For more information, follow @FederationSquare on Instagram and see if your photos get featured as their pics of the day.

Thanks for reading! Have you gone to visit the LEGO Christmas Tree at Fed Square? Let me know what you thought of it in the comments section!