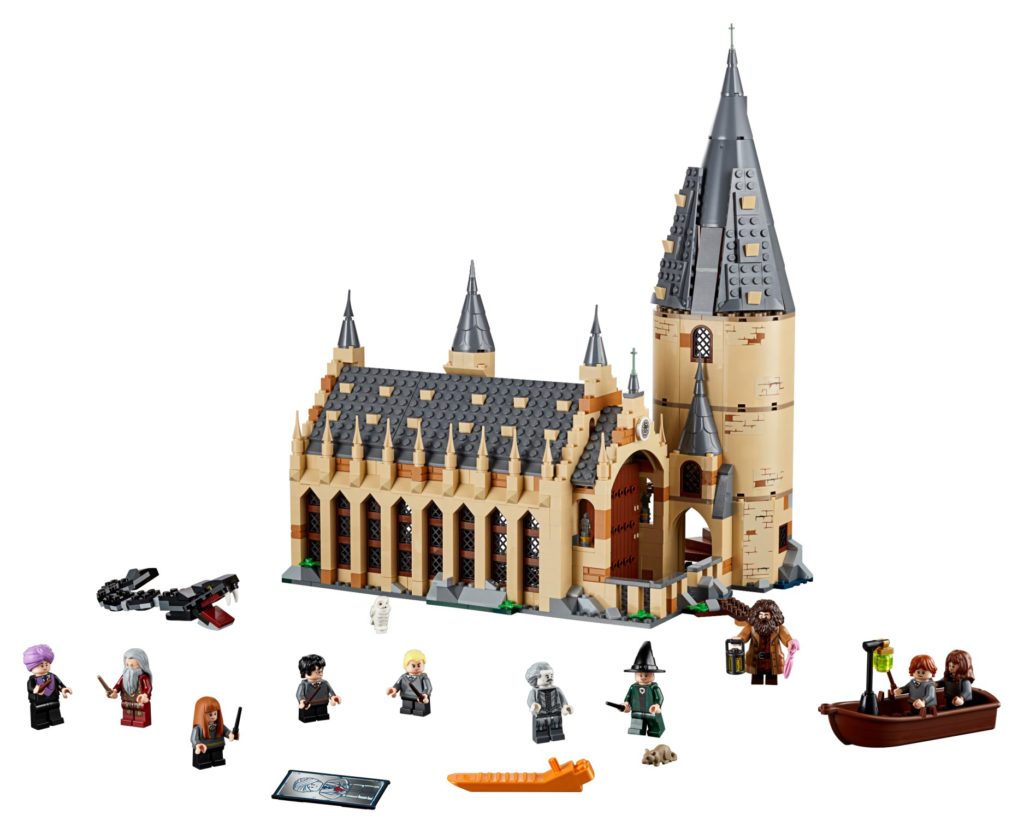 Harry Potter fans rejoice as 2018 marks the returning to the wizarding world of LEGO Harry Potter after a 7 year hiatus with LEGO 75954 Hogwarts Great Hall being unveiled early this morning!

The set blends iconic moments and characters from the Philosopher’s Stone and Chamber of Secrets movies and comes with a whopping 10 minifigures which includes the likes of Harry Potter, Ron Weasley, Hermione Granger, Draco Malfoy, Susan Bones, Professor McGonagall, Professor Quirrell with dual Lord Voldemort face, Hagrid, Albus Dumbledore and Nearly Headless Nick, plus buildable Basilisk and Fawkes creatures, and Hedwig and Scabbers figures, all of whom are updated for 2018 with new prints, hairpieces and accessories.

Interestingly, Harry, Hermione, Ron, Malfoy and Susan Bones all now have short legs, to reference their smaller statures in the first 2 books. Susan Bones is a pretty interesting character as she wasn’t a massive character, but gives us some much-needed Hufflepuff representation.

Can you believe that Susan Bones is the FIRST ever Hufflepuff (student) minifigure? Professor Sprout doesn’t count, but yeah, it’s taken this long to get a Hufflepuff. Hufflepuff represent!

Personally, I think Hannah Abbott would’ve been a better inclusion as she had a much more prominent role in the books, and also had the distinction of the first student being sorted during the Sorting Ceremony.

Pretty much all the big hitters are included in the set, which is fantastic for us Potterheads, especially those of us who missed out the previous Harry Potter sets.

The set’s release date is 1 August 2018 and is priced at US$99.99 which is terrific price for a set with 878 pieces and 10 major character minifigures. 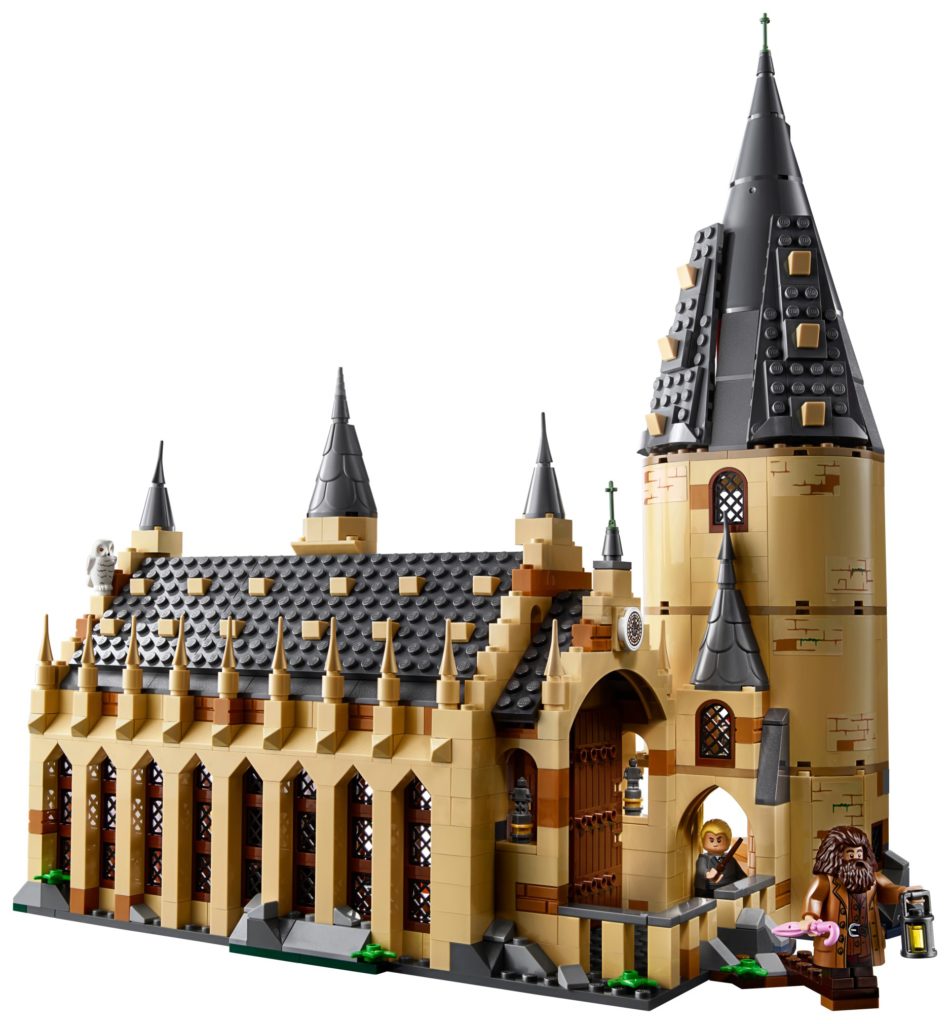 The exteriors have seen a massive upgrade, making use of contemporary build techniques and new elements. The biggest change from the previous Harry Potter sets is the switch from Sand Green towers and roofs for dark grey which are a little more film-accurate.

I love that we’re seeing the return of the Hagrid-fig, and that he comes with his pink umbrella! I also love what looks like a new lamp accessory! 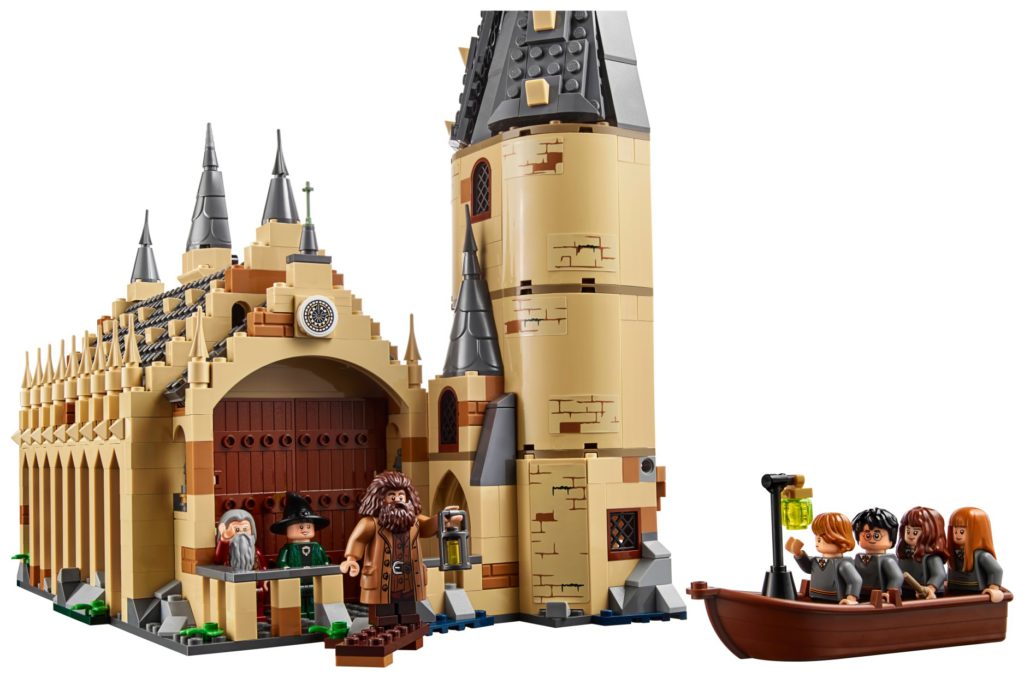 I also really love the inclusion of this iconic scene, where first year Hogwarts students arrive via boats and see Hogwarts Castle for the first time. 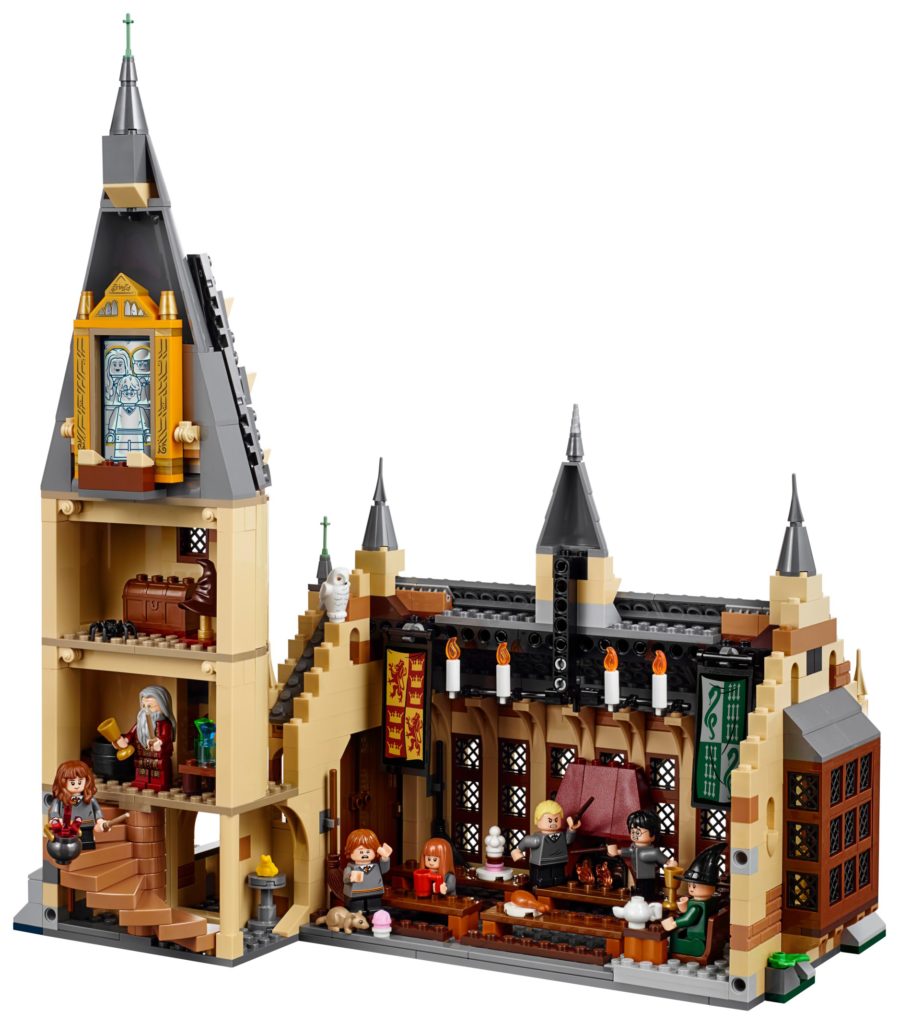 The interiors of the set is packed with so much details. The Great Hall features classic staples such as the floating candles and 2 house reversible House Banners (switching Gryffindor to Hufflepuff immediately as Hufflepuff is the GOAT house).

You can also see a closer look at Scabbers, Ron’s pet and secret Animagus, Peter Pettigrew which is a brand new rat mould which has been a longtime coming. I’m glad we’re going to do away with the old rat piece.

There are some neat accessories such as the Mirror of Erised in the top floor of the tower, the awesome new Sorting Hat (so excited for this!) mould and of course the return of Hedwig of the Owl!

Oh and the most exciting thing about the model is the presence of Technic pin holes, which suggest that the set is designed to combine with other sets in a Modular Capacity.

Oh, god, I cannot convey how excited I am for the return of LEGO Harry Potter in 2018. I cannot wait to see more sets revealed and will undoubtedly be buying them all when they’re released.

The Harry Potter fandom is one of the biggest and most enduring fandoms of modern pop culture, and has been clamouring for a return to LEGO Harry Potter, so this announcement will undoubtedly make a lot of people very happy, especially those that missed the entire theme.

Let me know in the comments how excited you are for the return of LEGO Harry Potter and what you think of the Great Hall!

Oh and for a blast from the past, check out my one and only LEGO Harry Potter review of the Forbidden Forest set, way back from 2012!