Going to start a new Category of posts on Retro/Classic Lego sets, because I am a HUGE fan of old Lego sets. Call it nostalgia goggles or whatnot, but it’s hard to deny that many of the best and memorable Lego sets hail almost a decade ago and for many AFOLs, the golden age of space exploration, dragons and castles and pirates are considered by many to be the pinnacle of Lego products.

I recently picked up the iconic Wolfpack Tower from a buyer online at a pretty decent price. The Wolfpack were one of the minor factions of Lego’s Castle theme and featured as rebels and renegades with a taste for gold. Think the opposite of the Forestmen, Lego’s take on Robin Hood. 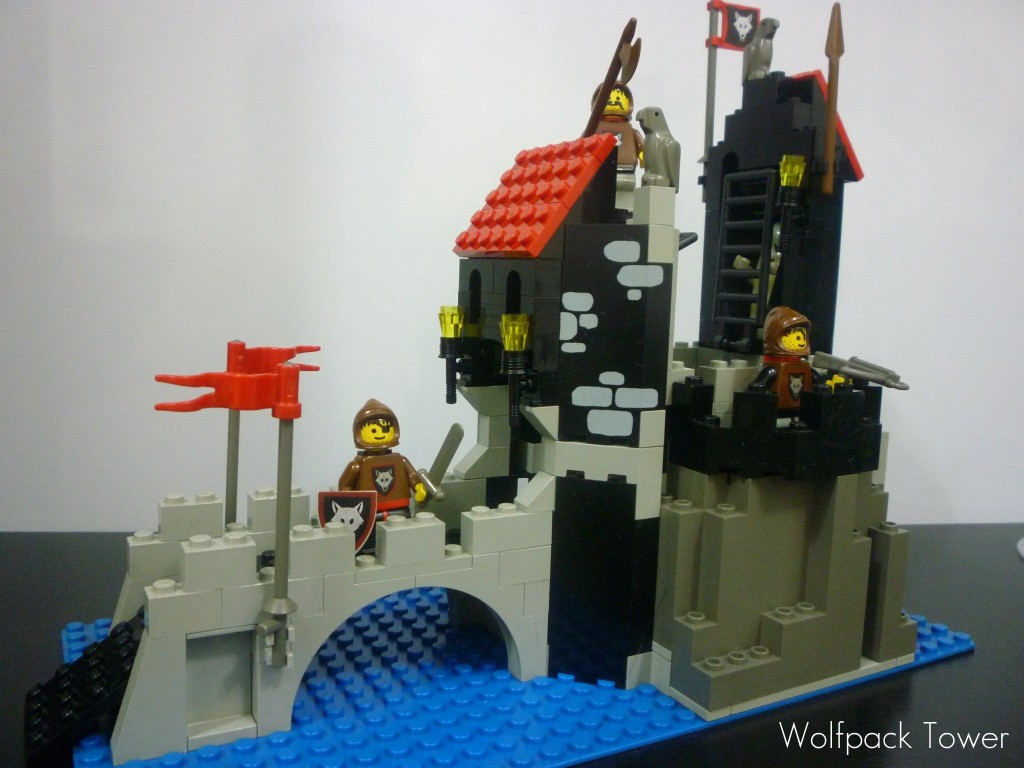 I remember having one Wolfpack guy, and I guess their iconic Wolf sigil made quite an impact to me. The Wolfpack theme is one of the smallest in Lego’s history with only 3 sets made, 2 of which were on the smaller <100 bricks side. The Wolfpack Tower is the largest set of the series, clocking in at 236 pieces and comes with three (woohoo!) Wolfpack renegades as well as a Ghost! They don’t make Lego sets like these any more. 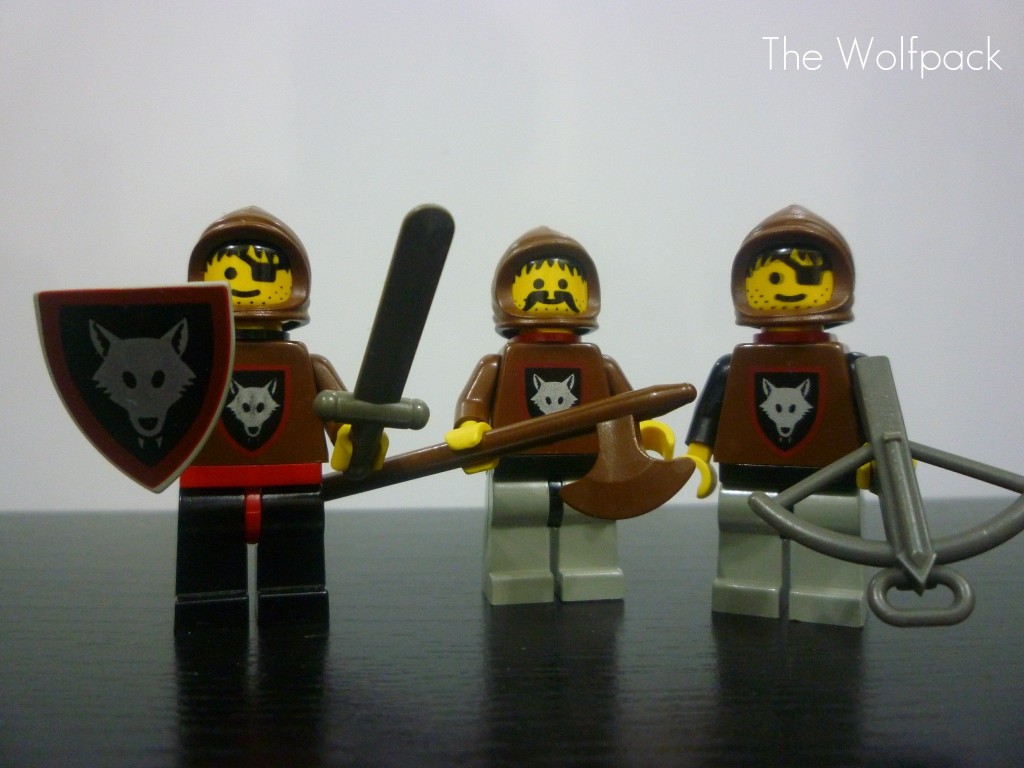 Here we have the Wolfpack! Three bold renegades who are obviously up to no good based on their faces! If you have an eye patch and a beard, you must be a bad guy! One of the guys was supposed to have a different face and a different coloured cowl, which I guess the original owner probably mixed up. But no worries. Even though this set is at least 10 years old, the minifigs are in great condition, with their Wolf sigils still in relatively good condition. We also get quite a cool bunch of weapons including a cool brown bardiche, which I really like. 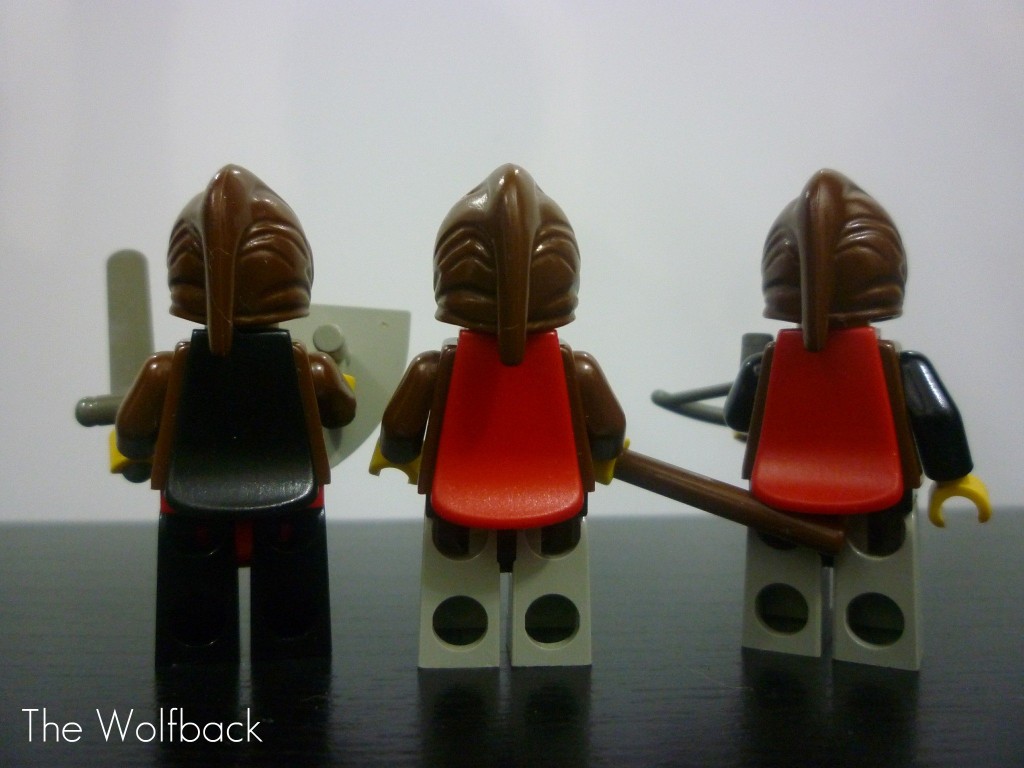 Now here’s a surprise! Each Wolfpack has a little cape, made out of plastic! I totally forgot these capes existed (I think they look like oversized bibs)  and that there were capes that were non-cloth. They look really cute. I think the guy with the black guy is supposed to be the leader or something. 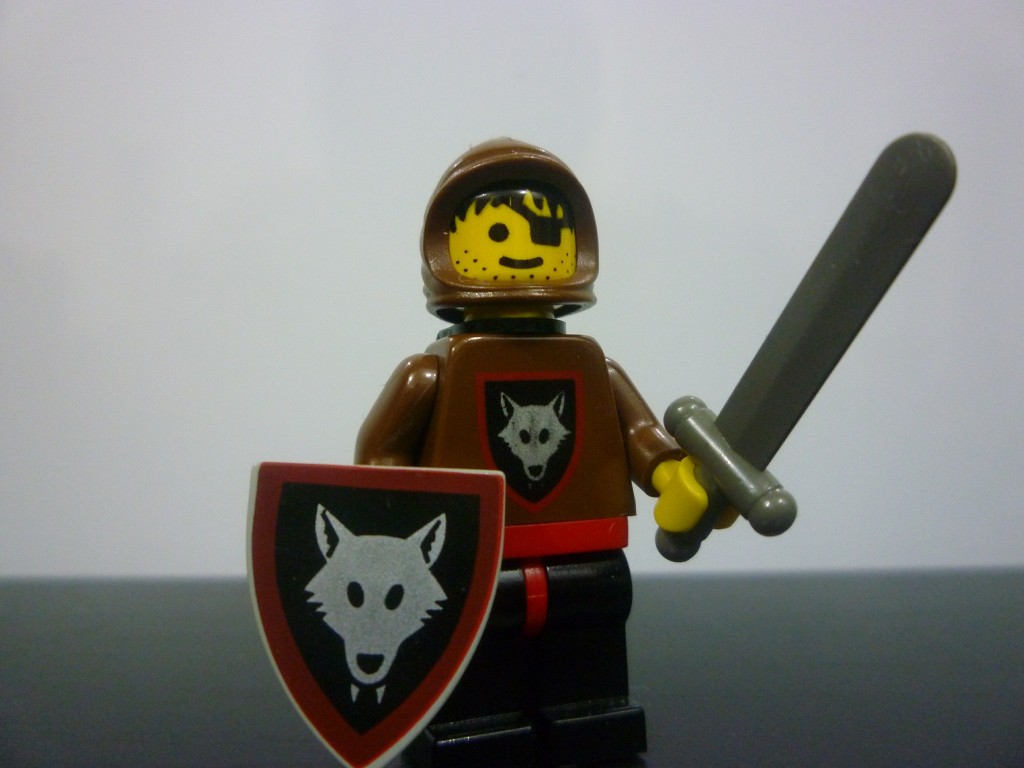 Here’s a closer look at our dear leader and the Wolf sigil. Out of all the Lego Castle factions, Wolfpack is definitely one of my favourites. I also bought them in case I one day decide to make a Game of Thrones inspired House Stark MOC. Winter is coming.

And here’s the unwitting star of the whole set, a Ghost! A Ghost! I’ve wanted one of these ever since I was a child, and now that I’m 22 I feel so fulfilled owning one. As you can see, the white bricks have largely discoloured (easily replaced) and it’s interesting to get a peek at what Lego did before they introduced stunted legs. The black minifig head is also a nice bonus. Sure, the upcoming horror-themed Monster Fighters set has a ghost train, but I was never planning to get that anyway. The Ghost looks like he has a pearly sheen to him and if you were wondering… 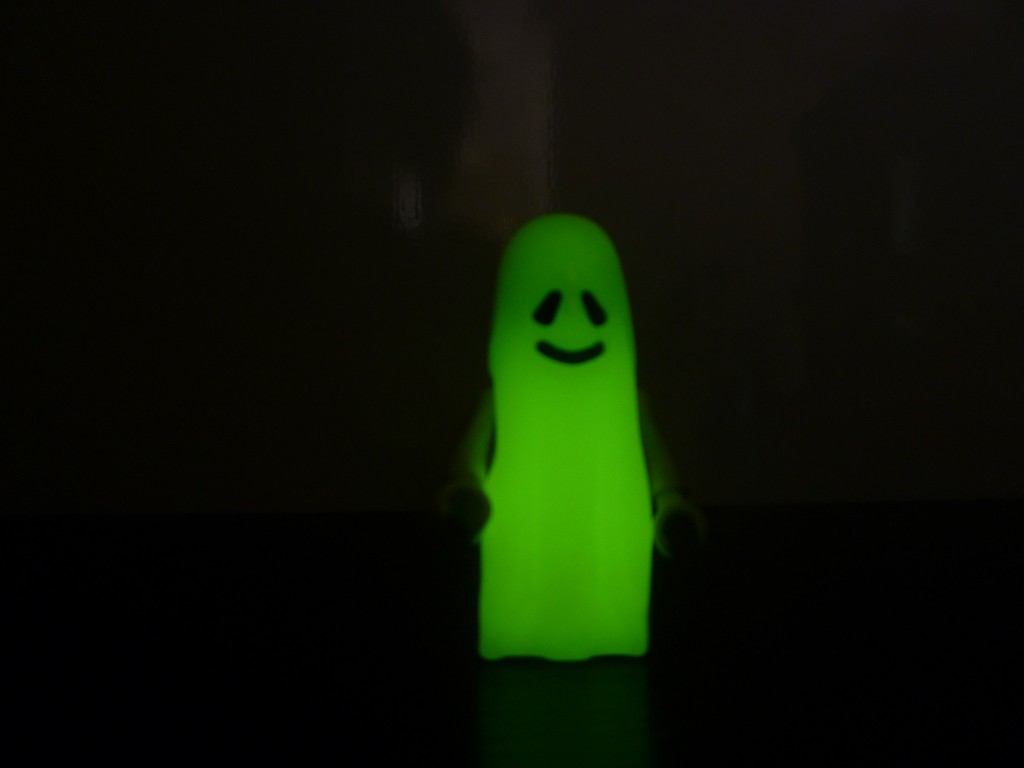 Yes, he GLOWS IN THE DARK. 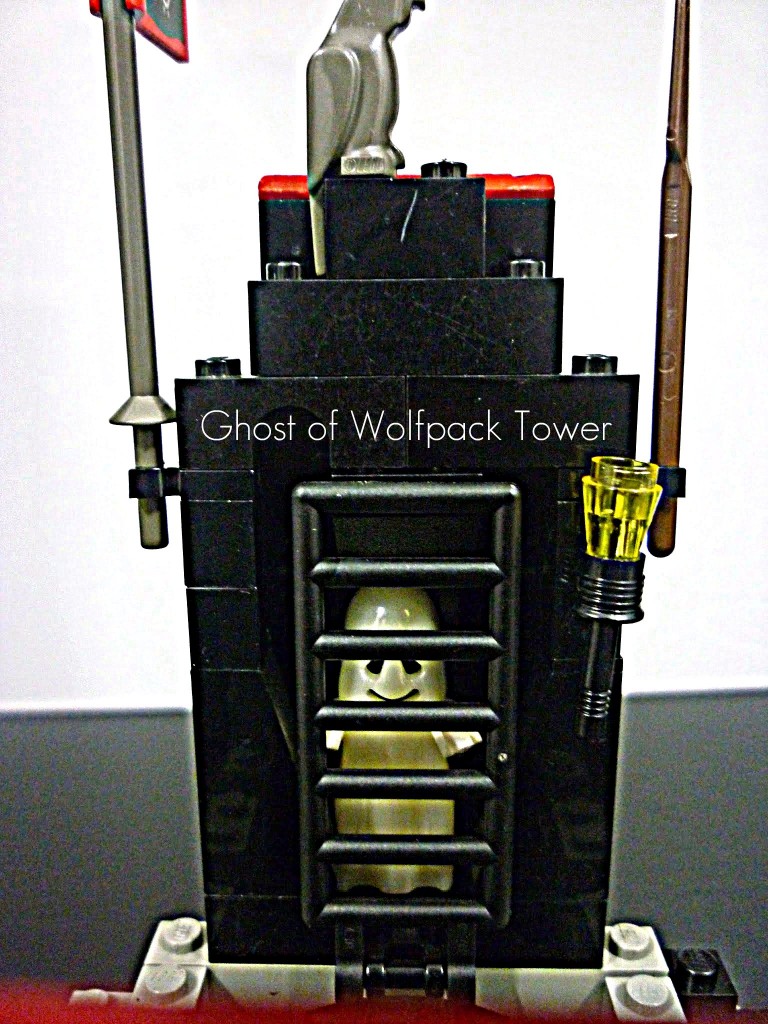 The ghost occupies a prison cell of sorts. Could he be a captive of the Wolfpack? Mysterious indeed. 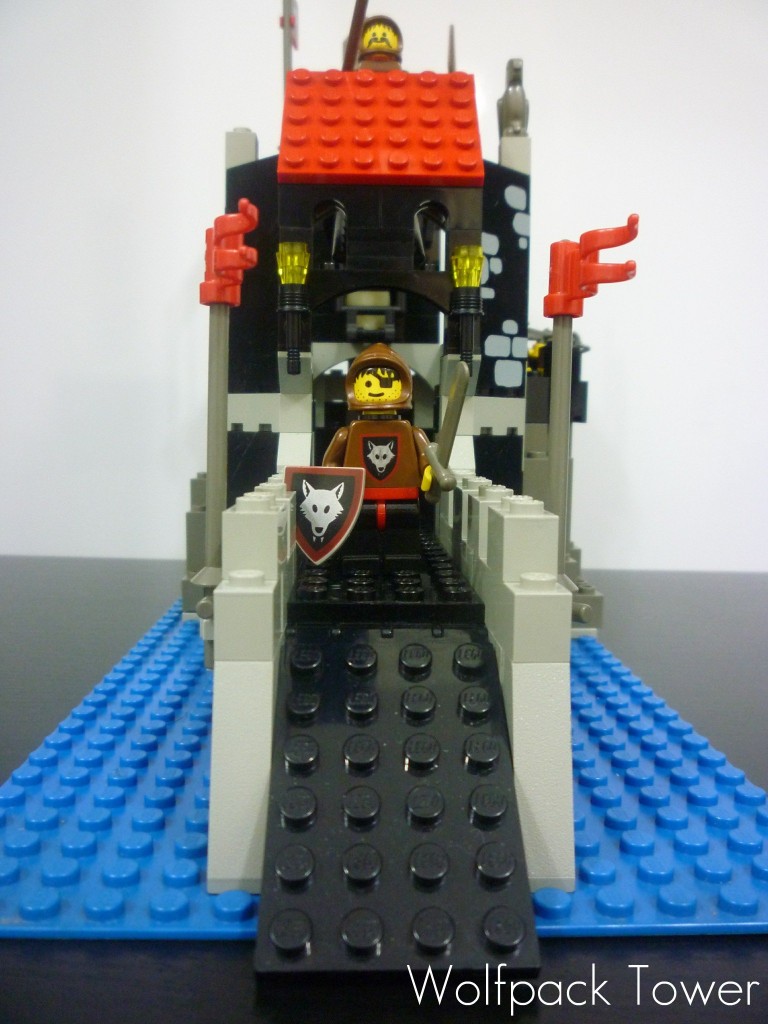 The Wolfpack Tower is essentially a small outpost of sorts, with a small stone drawbridge (which doesn’t rise) connecting the entrance to the tower. Here’s a shot from the front. 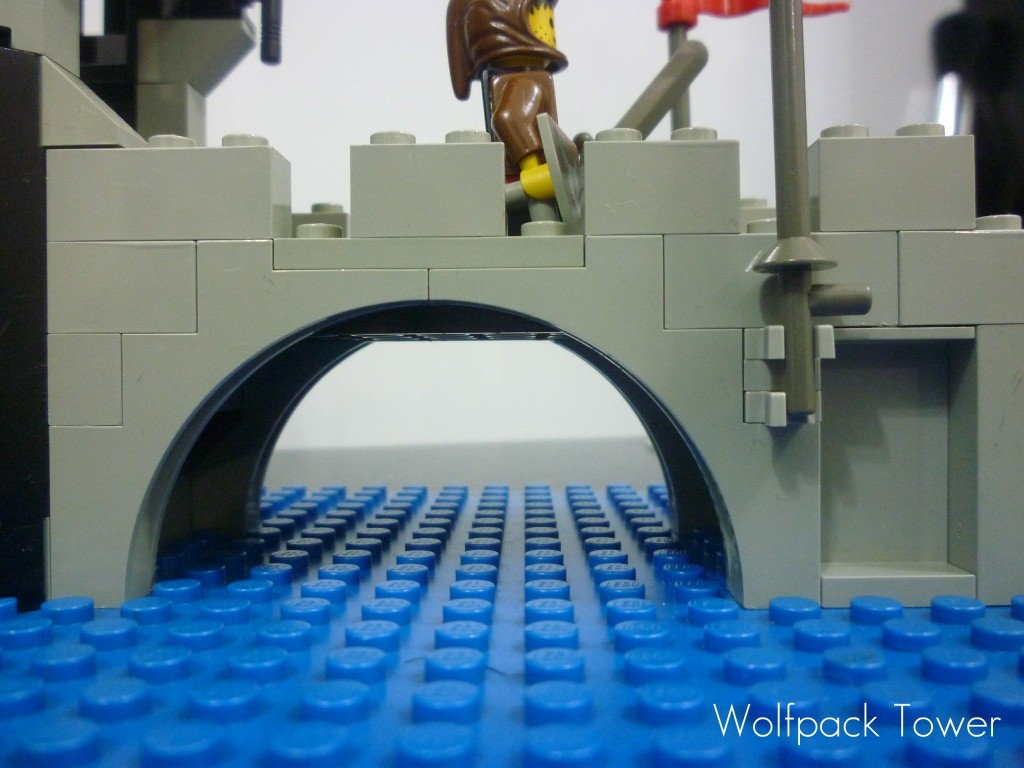 Here’s one of the drawbridge from the side. Compared to recent creations, the build looks largely primitive but I like it that way – I like the blocky retro builds especially in the way they use many basic bricks to come up with the designs instead of resorting to customized/specialized bricks. 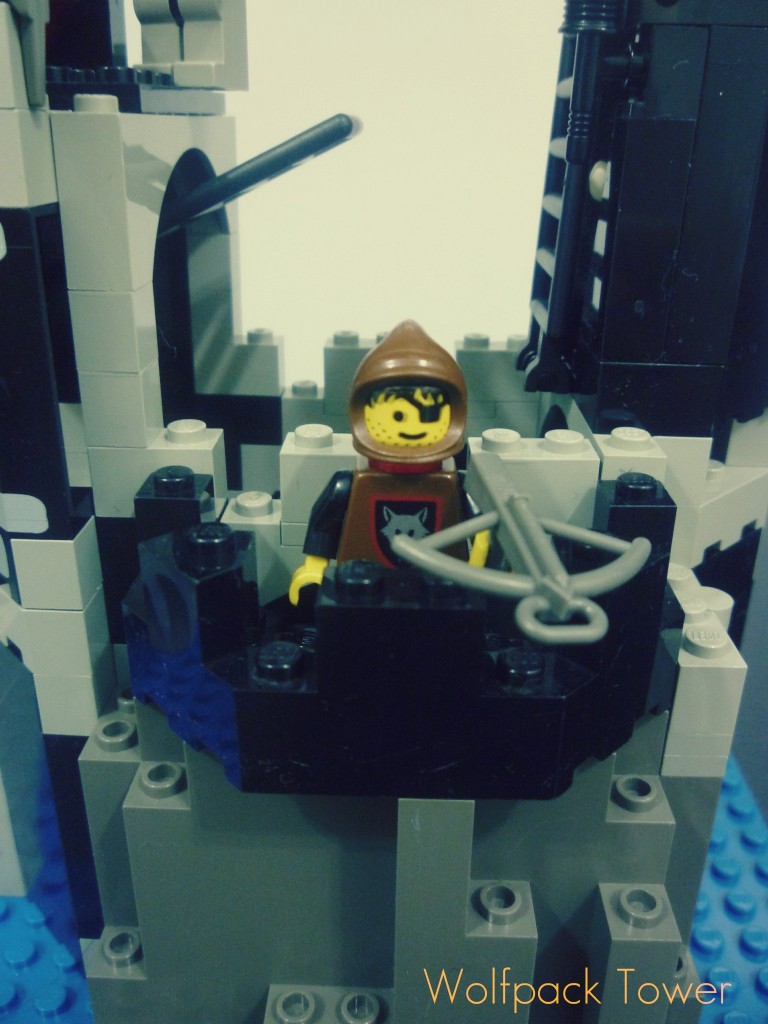 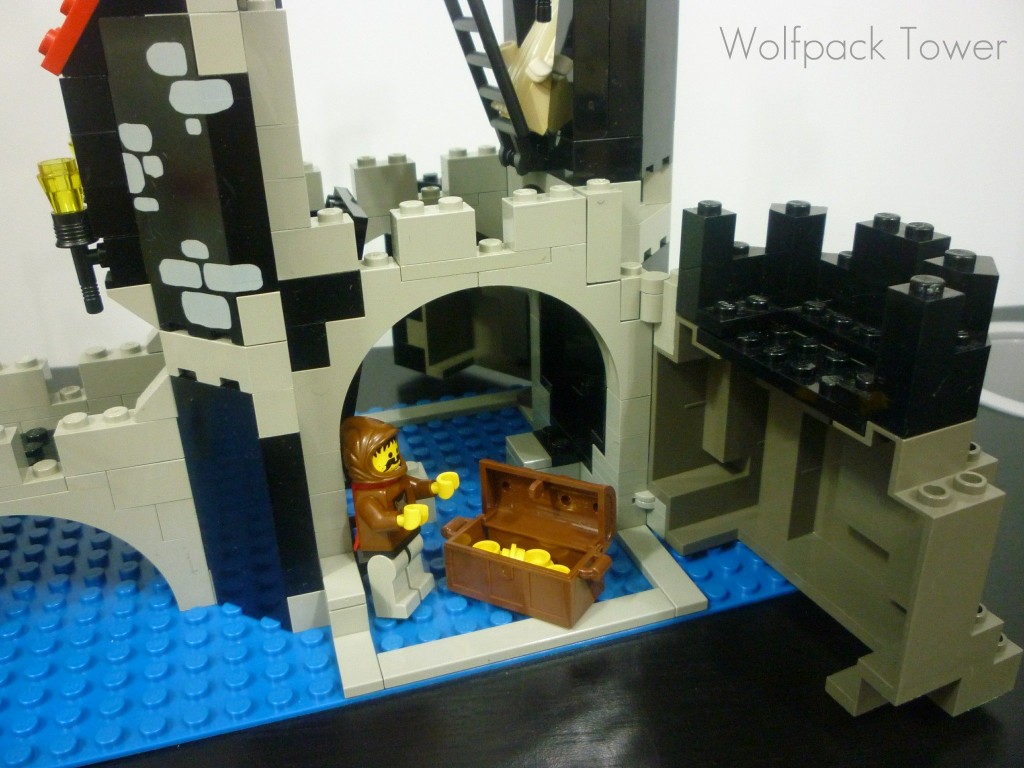 Why yes, what would a classic Lego set be without a bevy of play features! The rampart/parapets swing out to reveal the underside of the Tower. The Wolfpack hide their gold safely here (was disappointed that they didn’t include coins but only gave us yellow round 1×1 bricks) deep in the bowels of Wolfpack Tower. 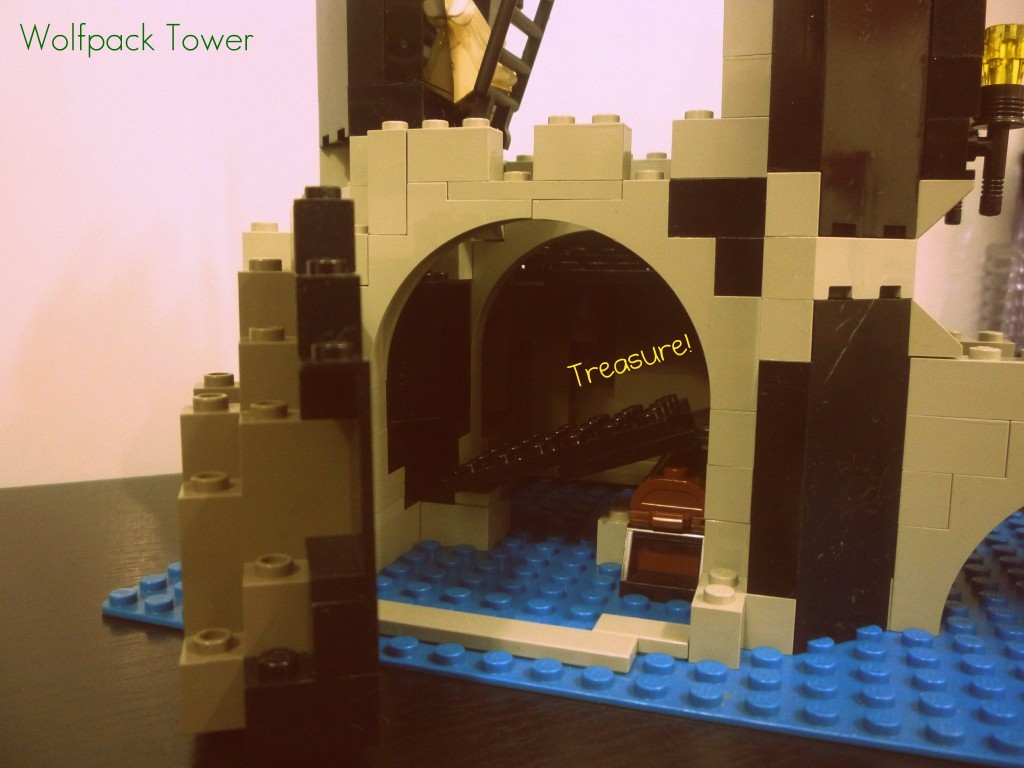 The cliffs on the other side of the Wolfpack Tower swings open too. Classic Lego sets were full of awesome play features, something I feel is sorely missed when it comes to modern Lego sets. It was a simple yet effective way to make a great looking set awesome. 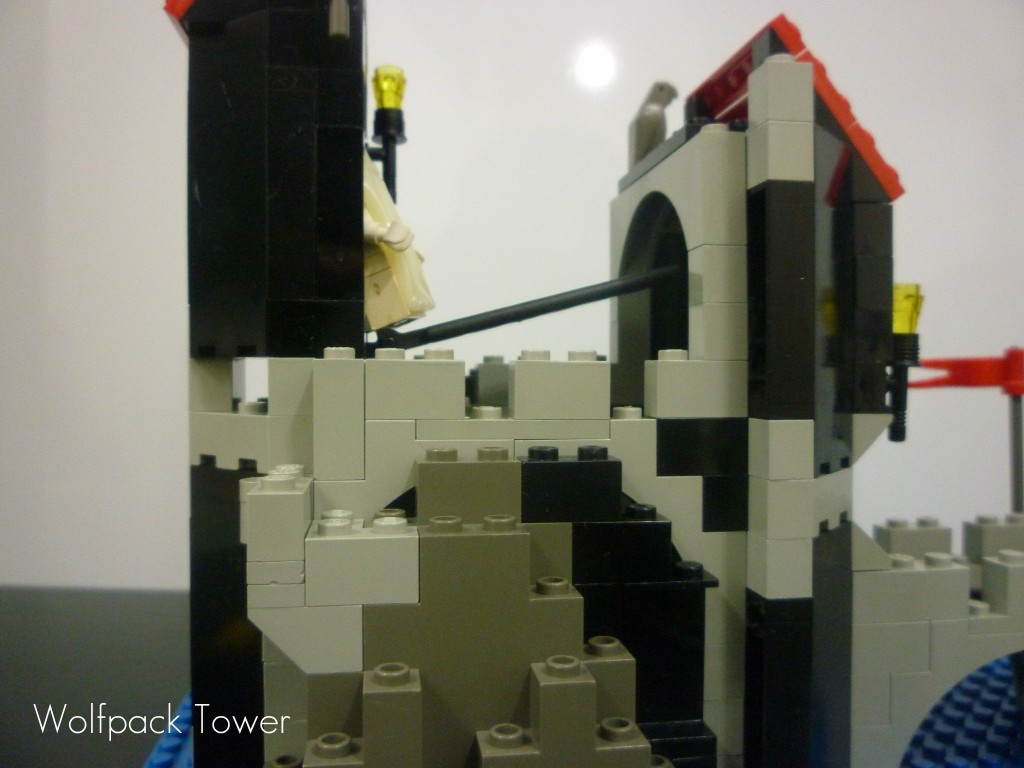 Here’s what the other side of the Tower looks like when the secret opening is concealed. The colour mismatch of the bricks look a bit weird, since Lego are so adept at blending brick colours so well these days, but in 1992, I wouldn’t complain! 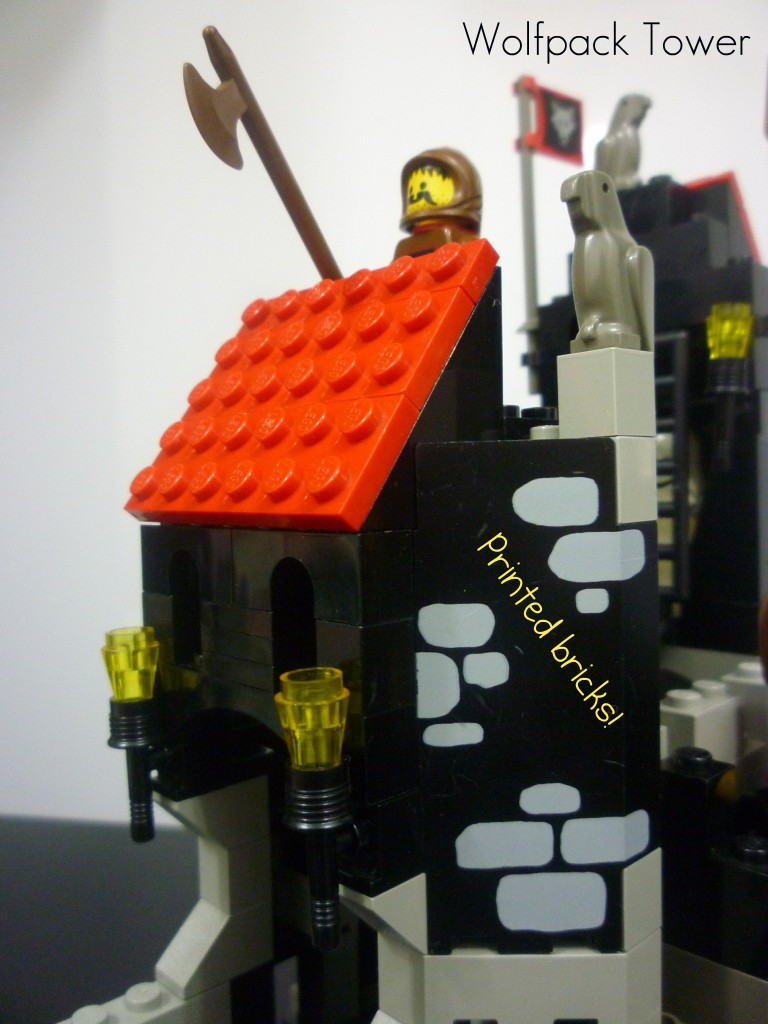 Here’s another great feature to the set. The corner piece they used to construct the gatehouse has actual bricks printed on them. Seeing as how Lego have strived to cut costs, I daresay we’ll never see such quality these days ever again and we’ll just have to settle for stickers. 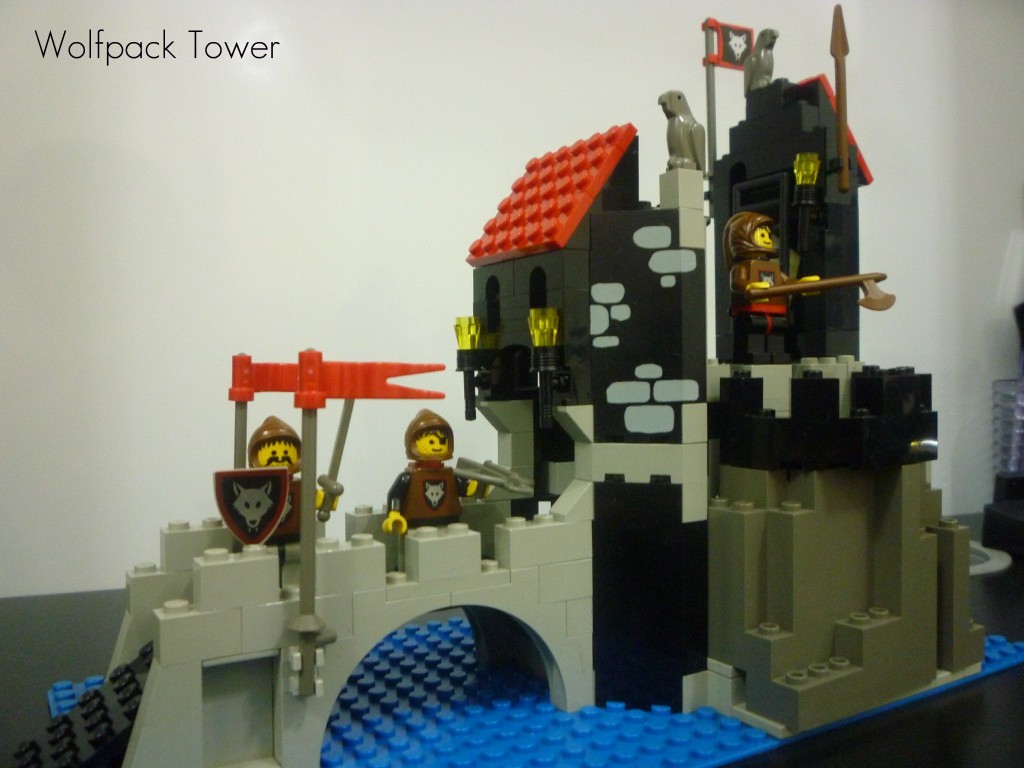 All in all, I’m glad that I plonked down some cash to get this set. I am a HUGE, HUGE fan of Castled themed Lego (yes, I like Castle a little more than Pirates) and seeing as how the Wolfpack Tower is a fun deviation from the regular castle or keep design, I’m proud to own this little bit of history. It was a really fun build and one more thing I realized of how far Lego has come was that the instructions were so much more complicated back in the day. Nowadays, we’re spoiled with one or maybe two things to do per step, but in 1992, you had multiple things to keep an eye out for. It was pretty challenging staring at it and making sure I didn’t miss anything out.

I love this set.

Here’s a fun scene I made using the Ghost and the Wolfpack. Hope you enjoyed this blast from the past! I hope to write more on my retro sets in the near future! 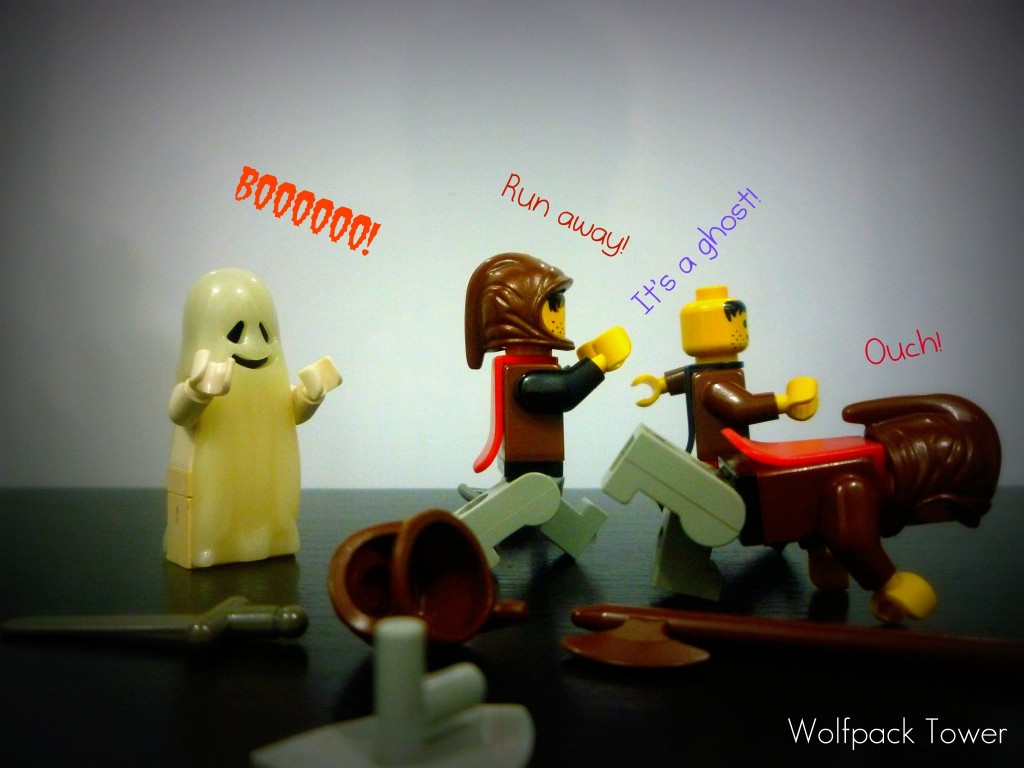