Can’t wait or afford LEGO Art but still want to get in on a creative brick-built illustration bandwagon? Brick Sketches has you covered.

Chris has been a prolific designer, and is known for his series of Brick Sketches – his work definitely caught LEGO’s eye before being lured by the Danish company to go work for them in billund.

Brick Sketches is the first (of hopefully many more) curiosities that LEGO and Chris have brought into the world.

The first wave of Brick Sketches includes the likes of Batman, The Joker, BB-8 and a First Order Stormtrooper, and officially go on sale on 15 July 2020 on LEGO.com.

These sets were provided by The LEGO Group for review 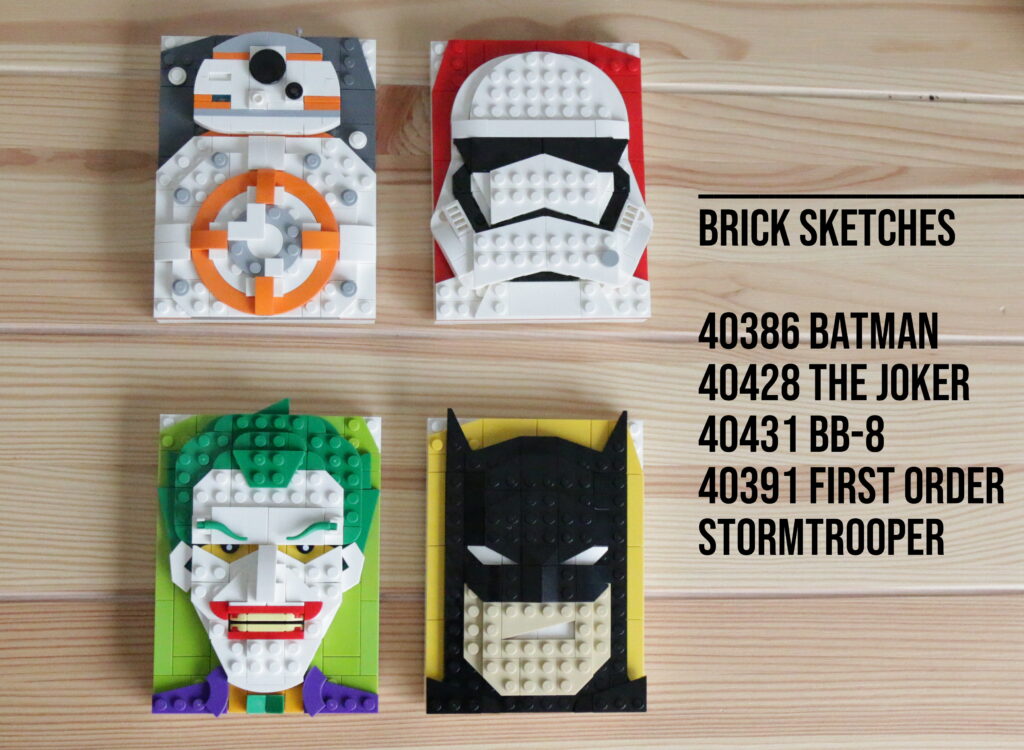 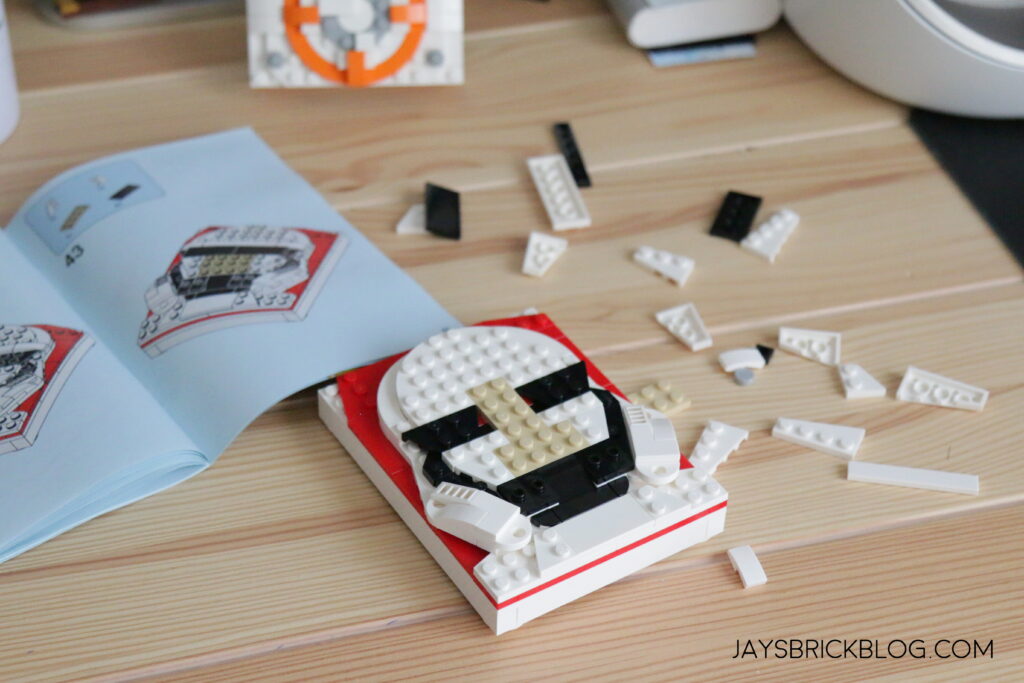 The Brick Sketches concept is simple – using a variety of common parts, you layer them on one another to create a type of LEGO collage featuring portraits of famous pop culture characters. 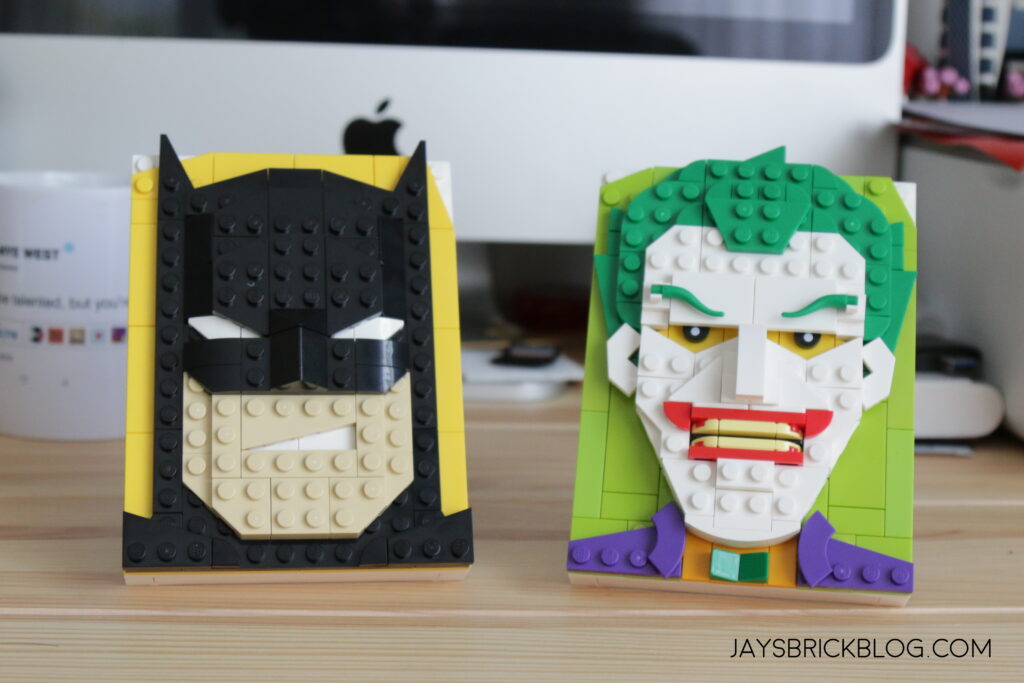 In Series 1 of Brick Sketches, we’re treated to two characters from DC Comics and Star Wars. DC is being represented by Batman and The Joker, and they were the first two that I built on a lazy Sunday afternoon.

I took a video of me building The Joker, which I thought would be my favourite. Enjoy this time lapse. 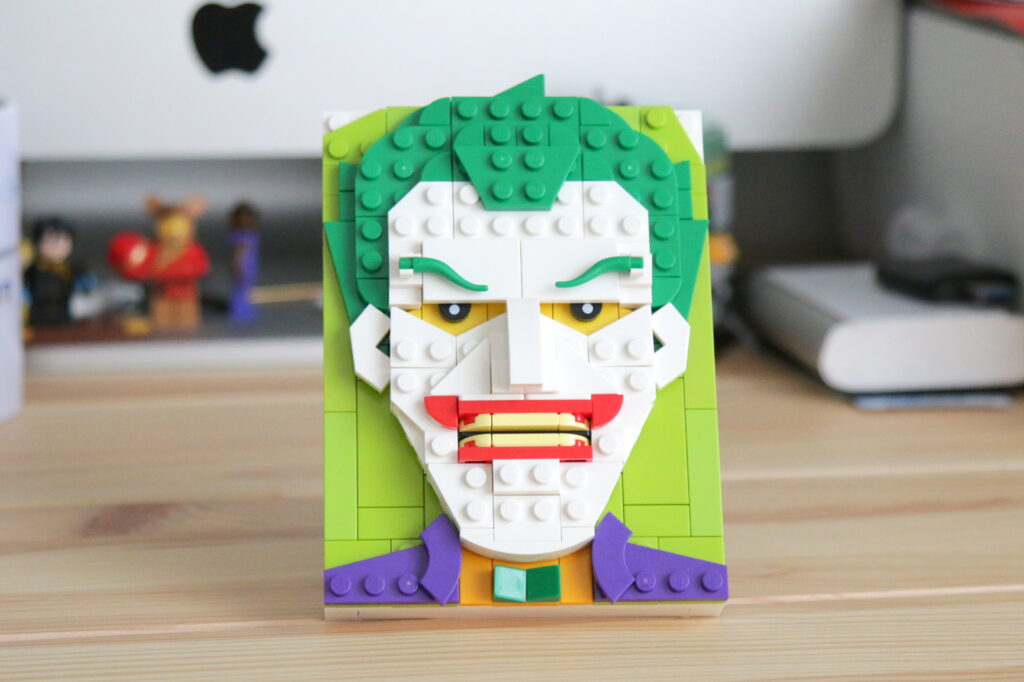 The Joker drew me in with his highly expressive face and bright colours. His eyes and eyebrows are bang-on and I love how vibrant and comic-booky he looks, with a splash of malice and insanity. 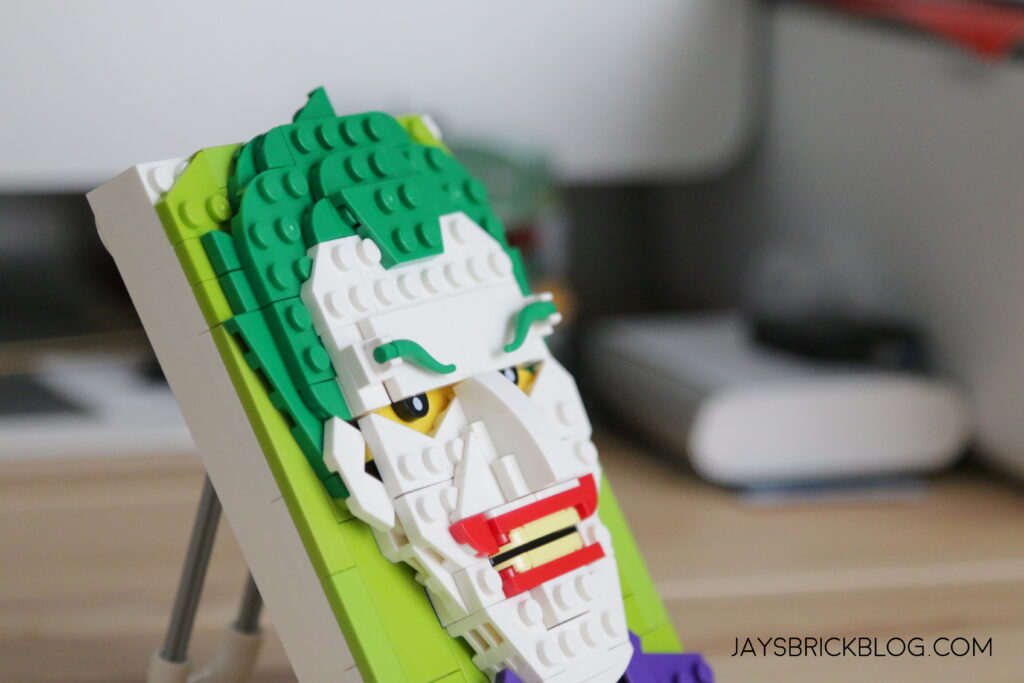 I really enjoyed the 3 dimensional build and how it looks like his face is emerging from the frame.

My favourite part would be his mouth and teeth, which are done so menacingly well. 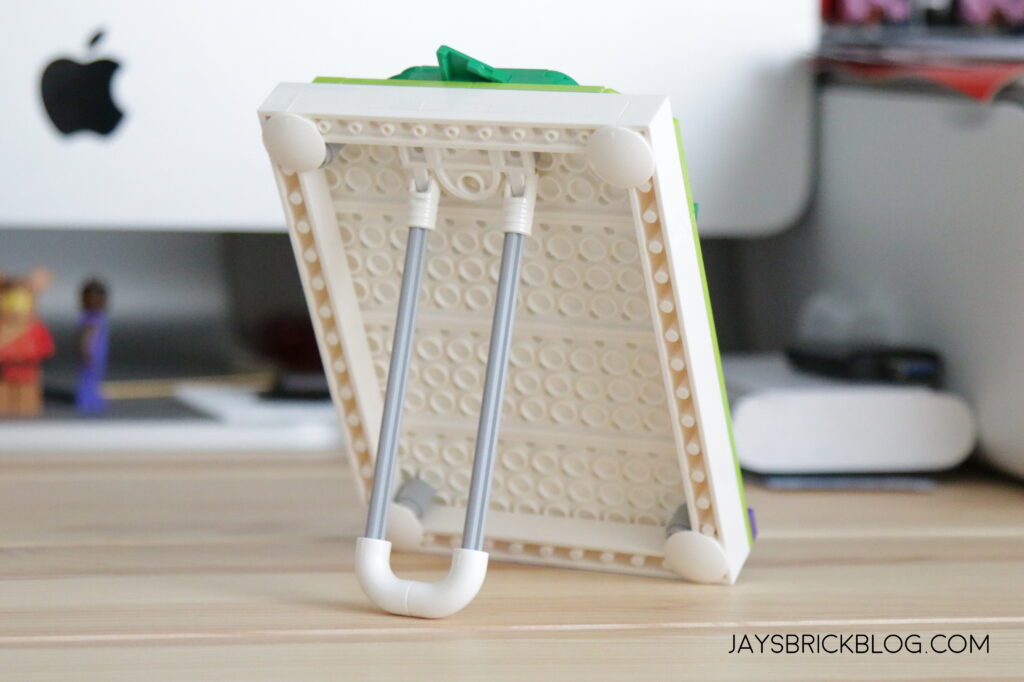 Each Brick Sketch is desiged to also act like a photo frame, and this little brick-built stand that you can fold out to display the sketches are a nice touch.

Here’s a time lapse of me building Batman. 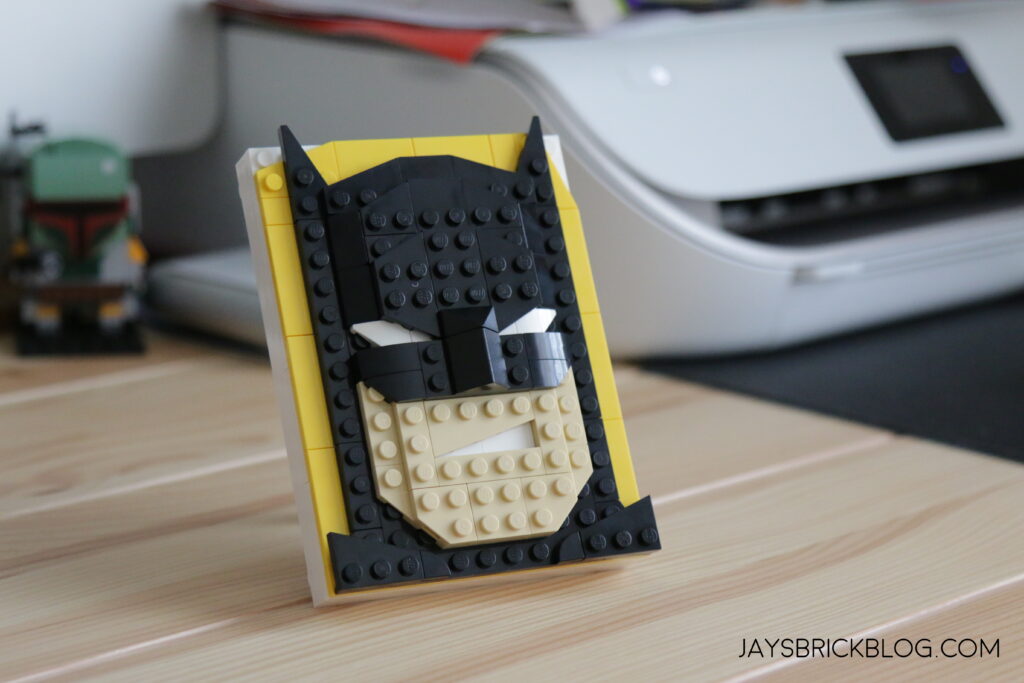 Batman was… kinda boring. First of all, unlike Joker which really catches your eye with his bright colours, Batman is very very subdued, consisting only of 4 primary colours. 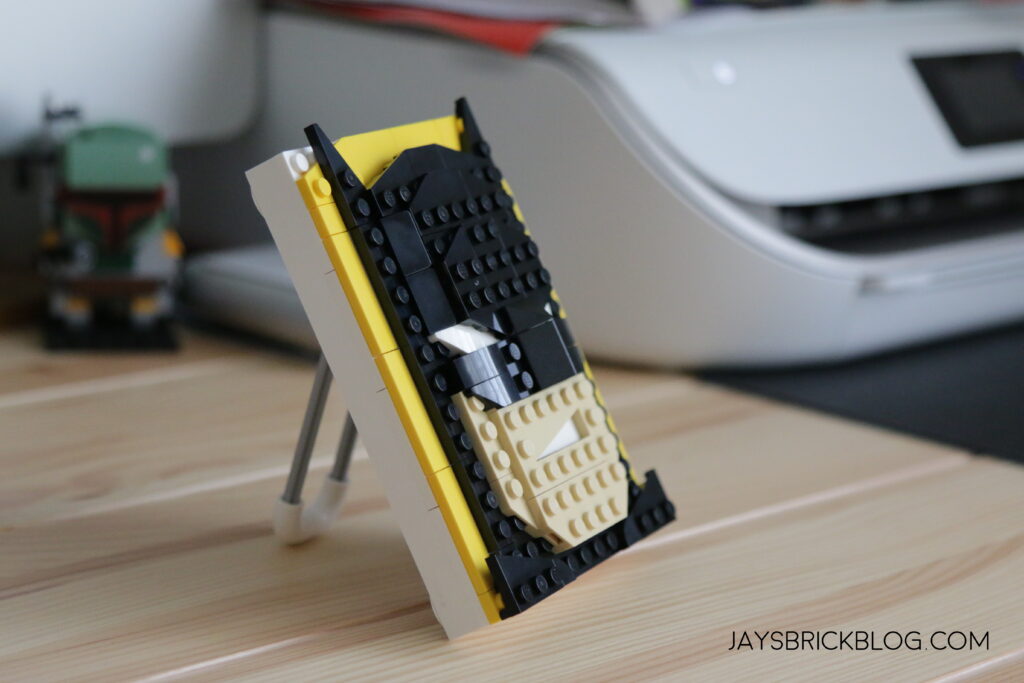 He’s also quite flat, and looks a lot more 2D than the Joker.

That said, for Batman fans, it’s a bit of a fun distraction, and will surely go down well with kids, but I feel like out of the four sets – Batman is the most uninspired designs and just boring overall. 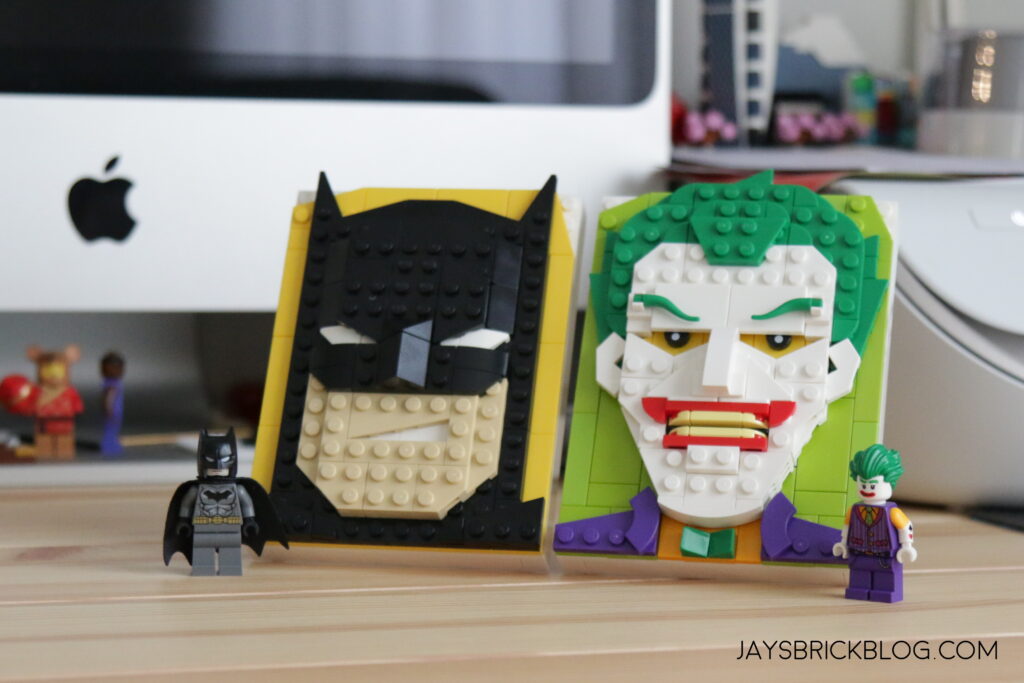 That said, if you were planning on picking either one up, I highly recommend getting the both of them as they look good as a pair.

These Brick Sketches are also quite easy to display as they don’t take up a lot of space, and work quite well on a work/home study desk. 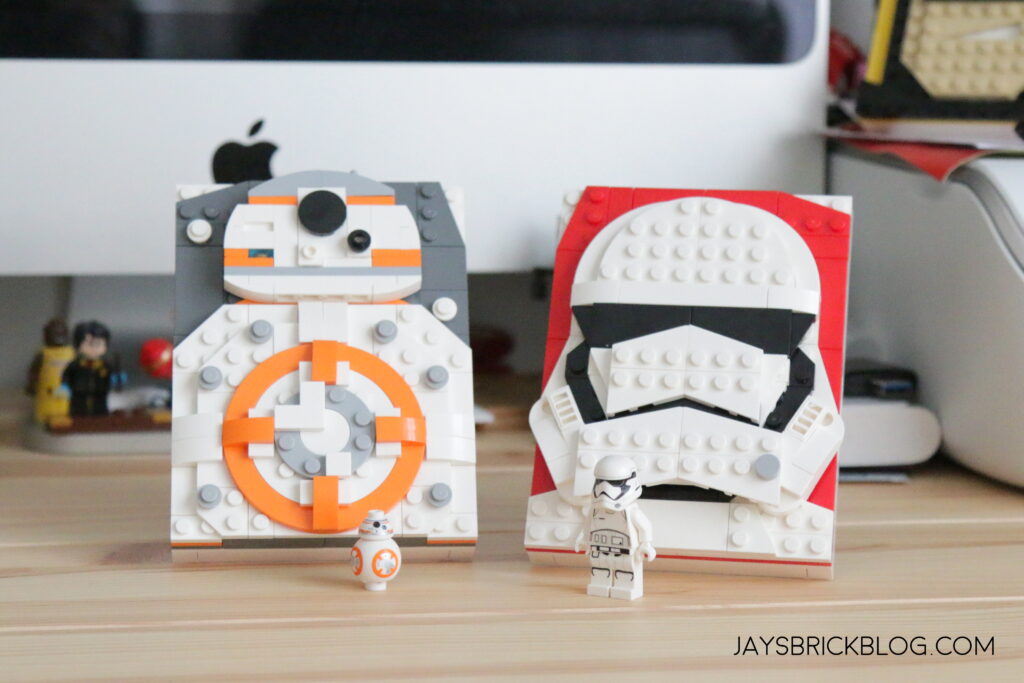 Up next were two surprisingly enjoyable builds, BB-8 and the First Order Stormtrooper (minifigs not included).

If they look familiar, it’s because you’ve probably seen the original versions on Chris’ Instagram from way back in 2015 and 2016. 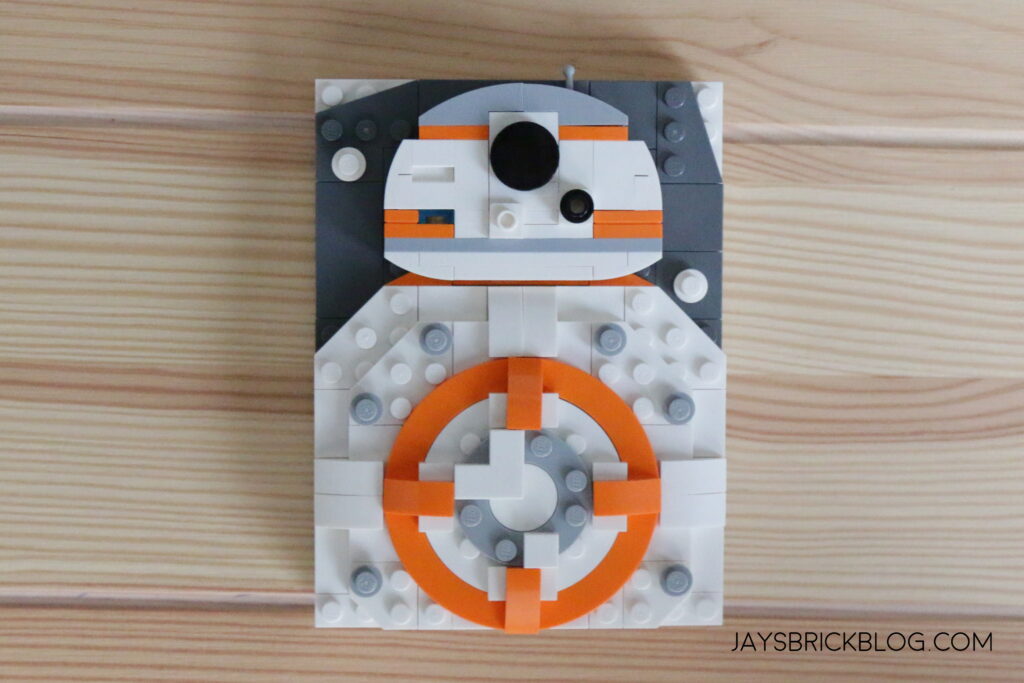 BB-8 was just a joy to build. For one, who doesn’t love this adorable spherical droid that’s easily the best thing about the prequels that isn’t Kylo Ren.

The Brick Sketch is also charming and cute, with a great blend of colours, and does an incredible job capturing BB-8’s fun, carefree mischievous personality. 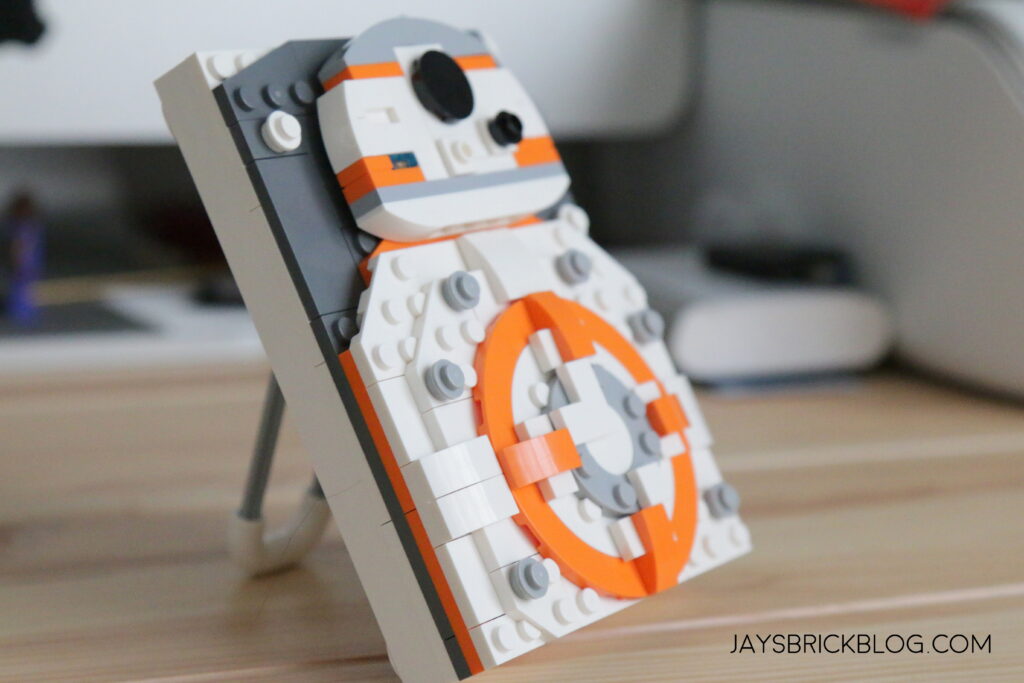 I really loved how 3 dimensional and the uniqueness of the build – BB-8’s head is built vertically instead of popping plates on each other, which gives it a distinct look.

I also loved the layering involved to give BB-8 a really interesting shape, and it really appears like he’s popping out of the canvas. 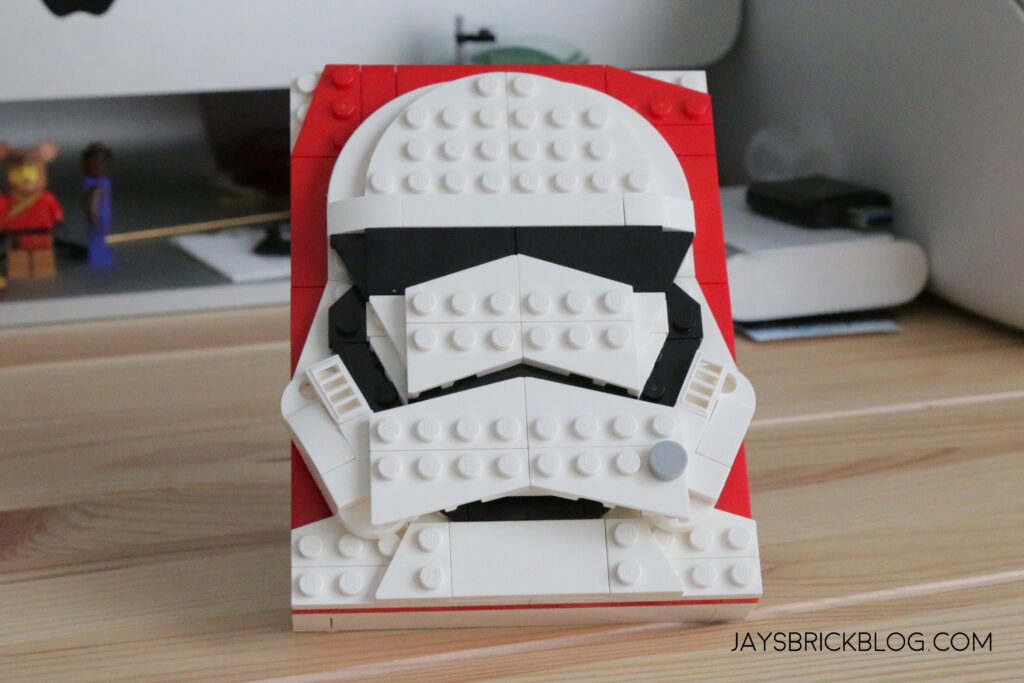 After Batman, I honestly wasn’t expecting much from the First Order Stormtrooper – after all the colours are pretty basic, and looking at it from the front, appeared quite flat, but oh was I glad to be wrong. 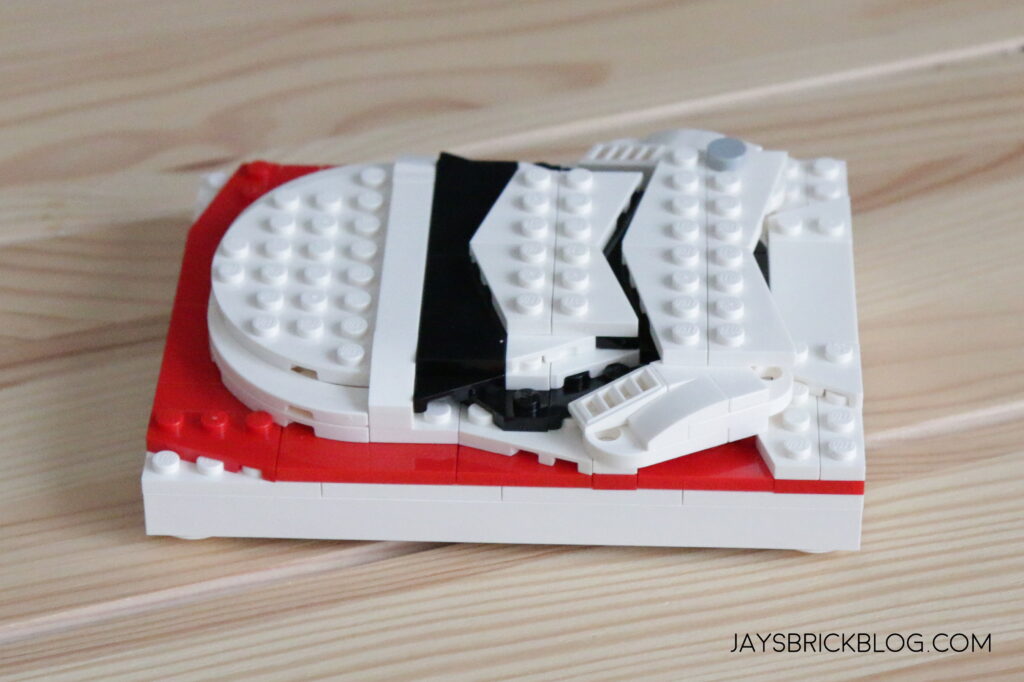 The initial photos were quite misleading, and the Stormtrooper’s shape is handled quite well, and has lots of layering and clever use of negative space and gaps to give us its distinct look. 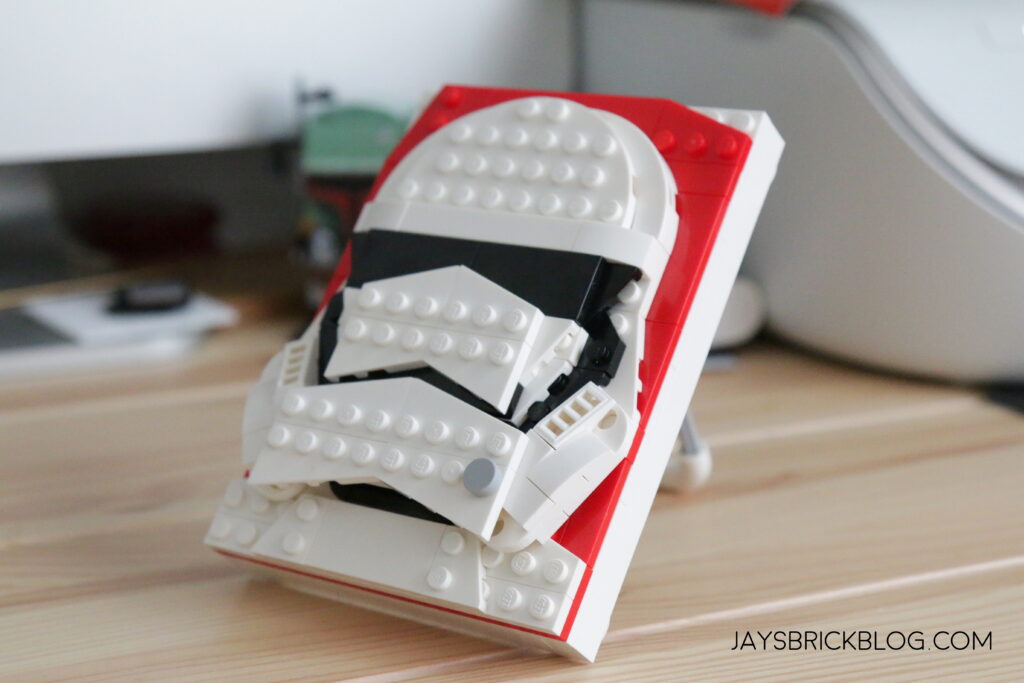 The sideways building techniques, and just how tactile it looks made this a surprisingly enjoyable build experience, and I was very happy with the end product. 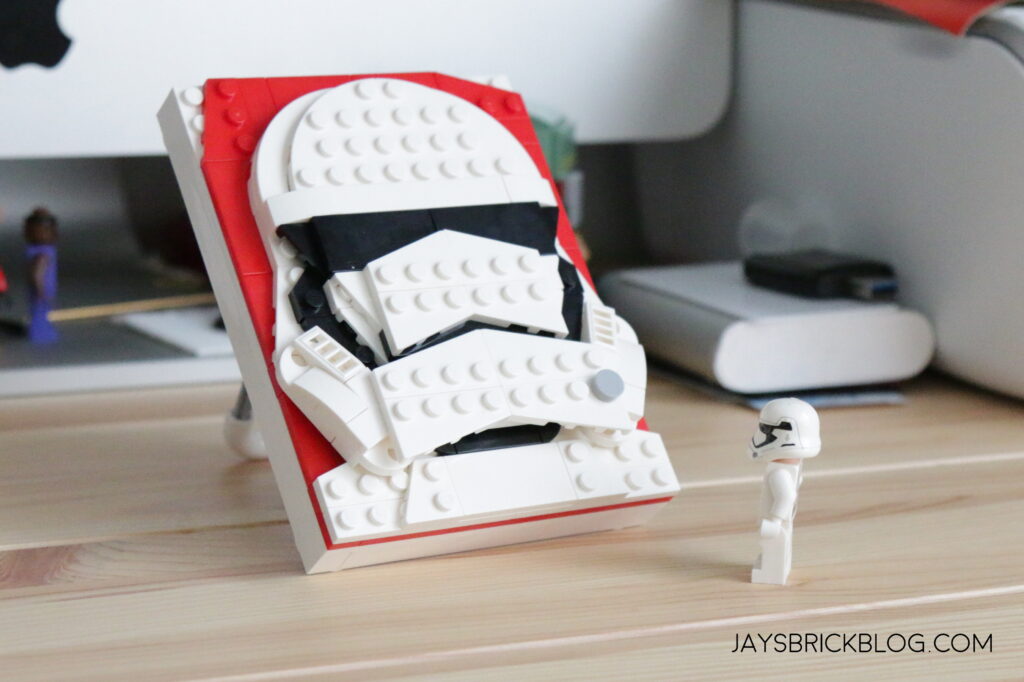 Final thoughts: As a new theme, I really enjoyed Brick Sketches, even though they’re not the most original thing LEGO came up with, especially as they’ve been fairly popular fixtures on Chris McVeigh’s Instagram.

I do like the concept of the theme – affordable little sets that you can use to decorate small spaces without takin up too big of a footprint.

With so many new LEGO sets on the market, these are priced very nicely, and I think has strong appeal with younger kids, as well as pop-culture obsessed adults looking to integrate more LEGO into their workspaces.

Out of all the brick sketches, my favourites have to be BB-8 and The Joker, as they both serve as an excellent vision of what this theme could be. The designs and builds are engaging and creative, and they really do a great job blending a 2-dimensional portrait with 3D LEGO layering.

I’d love to see more Brick Sketches, and hope this theme will see a long and happy life with plenty more characters from different licenses. A Deadpool one would be amazing.

Overall, a fun little release from LEGO that won’t break the bank, but will serve you well if you want to scratch that building itch, and are the kind of person to proudly display your LEGO collection to people.

Thanks for reading and I hope you enjoyed my review of LEGO and Chris McVeigh’s Brick Sketches!

Would love to know what you think of this new theme, and if you plan on getting some for yourself.

Brick Sketches go on sale on LEGO.com on 15 July 2020, and will be available worldwide.

Special thanks to LEGO for providing these sets for review.

To stay up to date on the latest posts, you can follow the Jay’s Brick Blog Facebook page or subscribe to receive email alerts for new posts!