Another new Lego Minifigures series, another 3-part review! I must say I’ve been pretty slow in getting to the reviews. Series 7 starting showing up at Malaysian Toys ‘R’ Us shops about 3 weeks ago at the brand new sucky price of RM10.90. Yes, Toys ‘R’ Us (or maybe ALJ, the local Lego distributor) saw the rising demand for Lego’s Collectible Minifigures Series as the perfect opportunity to gouge us consumers a little more.

Absolute bollocks. I was pissed off beyond belief when I saw the blatant price hike, because  the prices have been pretty much static throughout the world. Unbelievable move from Toys ‘R’ Us. This is why Lego buyers don’t buy shit from your stores and choose to import from overseas. Anyway, rant over and back to the review! As I did with Series 6 [1] [2] [3], I’ll be splitting up the review into three different parts because I tend to ramble when I write, and we all know how short our attentions spans have become thanks to the internet.

Anyhoo, ever since the pictures of the complete set was leaked, Lego fans around the world have been eagerly anticipating Series 7. Extremely substantiated, as I personally feel that this is the best Collectible Minifigures series out of the lot, and you’ll see why as I gush in my review. Possibly containing the greatest selection of minifigs and new elements designed to appeal to both boyish (think guns, aliens and swords) and civilian (think everyday characters) interests. Of note is the fact that Series 7 contains the most female characters ever in a Collectible Minifigures series, (5!) which is great because male minifigures have always traditionally outnumbered females.

Also, for the first time, I opted to get the entire line, something I’ve never done before when it came to minifigs, which is testament to how awesome this series is. For Part 1, I randomly picked out 5 packets to be opened and ended up with the following: 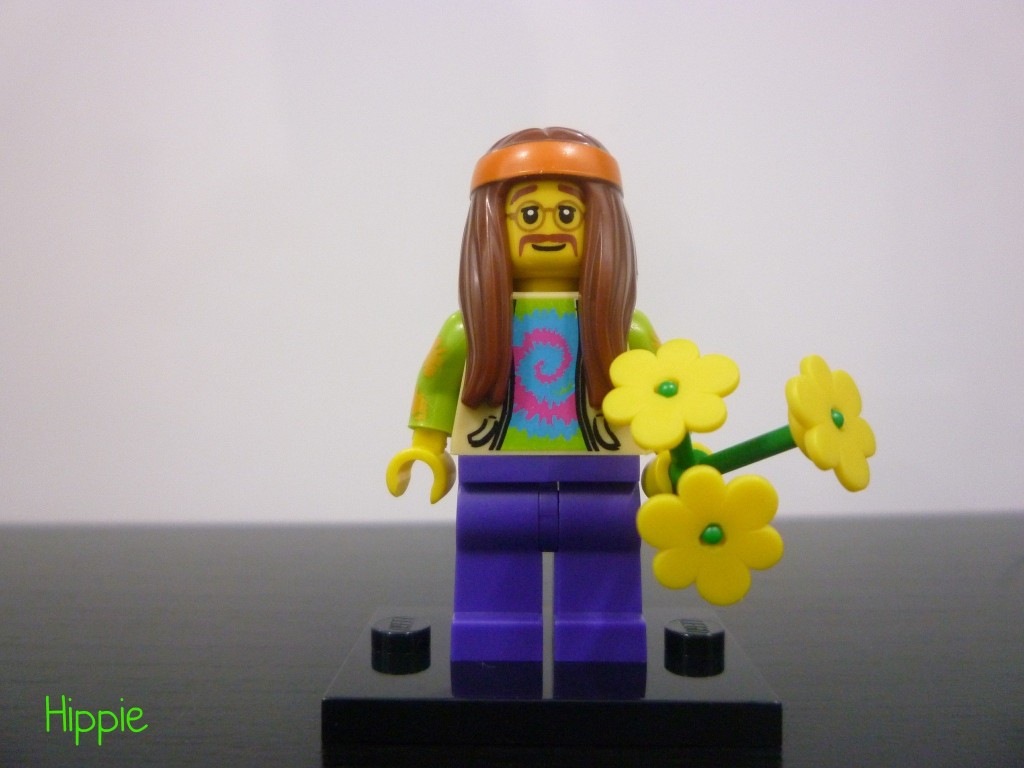 Right off the bat, we’re treated to the personification of the 70s, flower power and the peace movement, the Hippie in all his psychedelic glory! So groovy. It really looks like Lego borrowed heavily from John Lennon and slapped a moustache on him to make it slightly more groovy (everyone knows you’re not a real hippie till you grow a sweet stache/beard). The hair piece is great and really captures the hippie look down to the headband. They totally nail the facial expression, because man, the hippie does look kinda stoned. Throw in a totally rad 70s inspired tie-dye shirt design complete with hippie vest for the torso and you have yourself a winner. 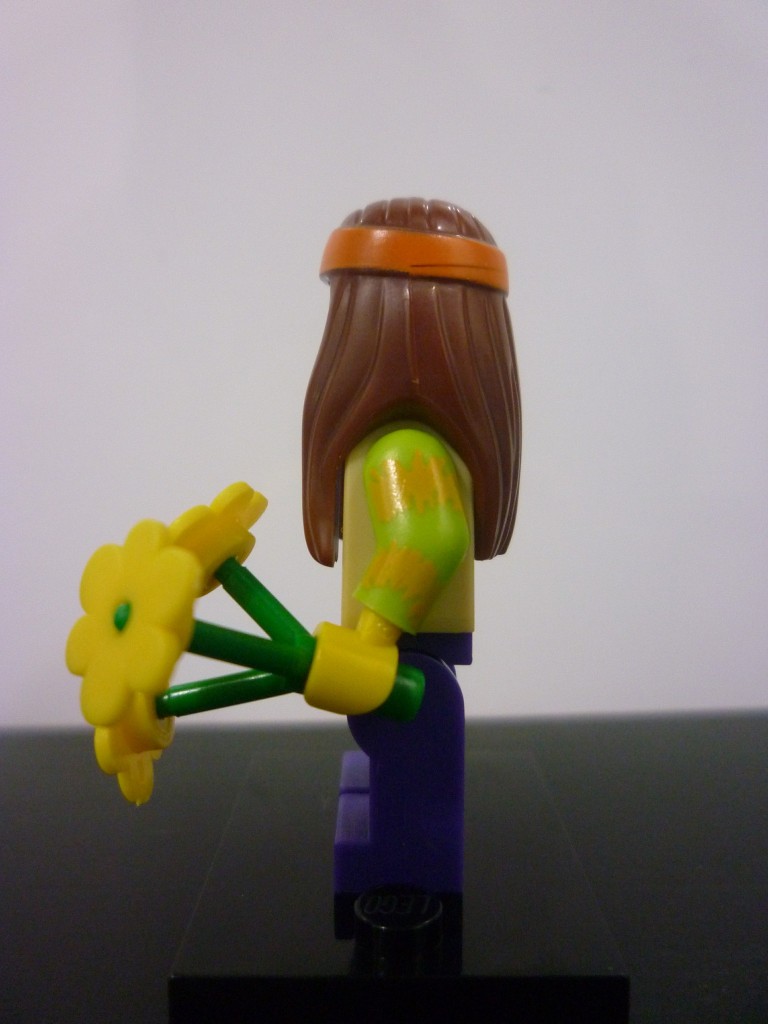 The detail on the torso is done pretty well that they even pimped up the sleeves (not something we see Lego do very often!) but too bad we don’t get any back printing. One of the major new elements other than the Hippie’s hairpiece is the handheld flower stalk (which the bride also carries). It’s a great new addition as we’re now able to have the minifigures hold proper looking bouquets. 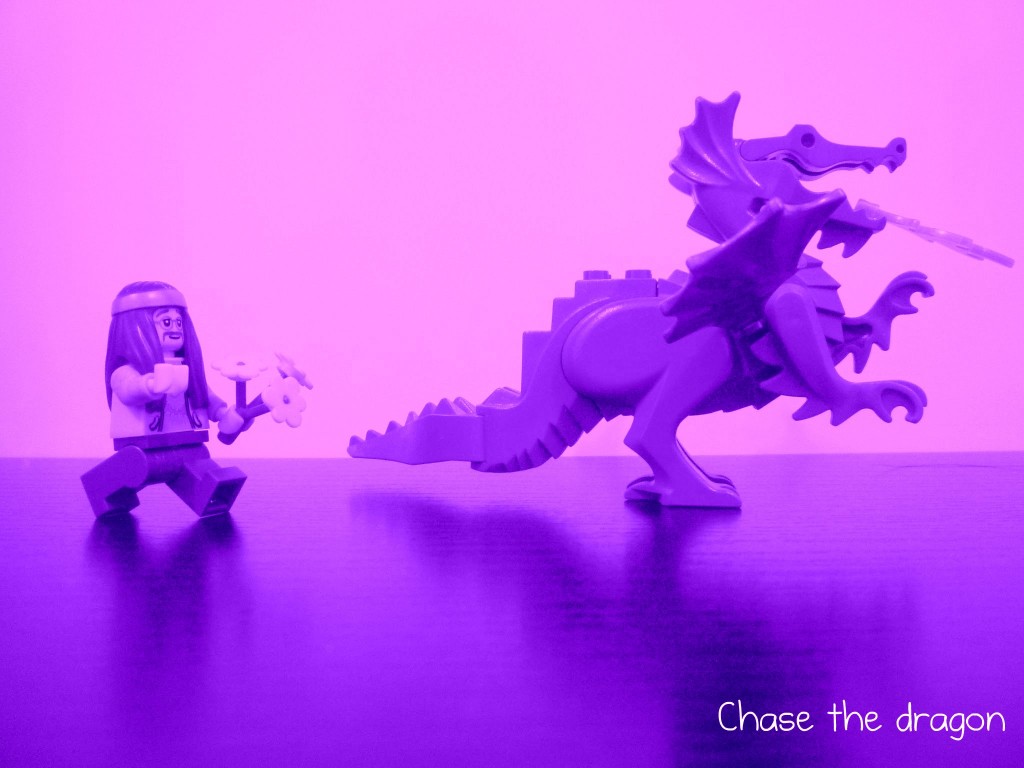 How To Find One: The hippie’s hair is the most distinct piece since it’s a solid block of plastic with a fork in the front. The sides (for the sleeves) are also forked.

Tennis Ace “Wham! And there it goes!” 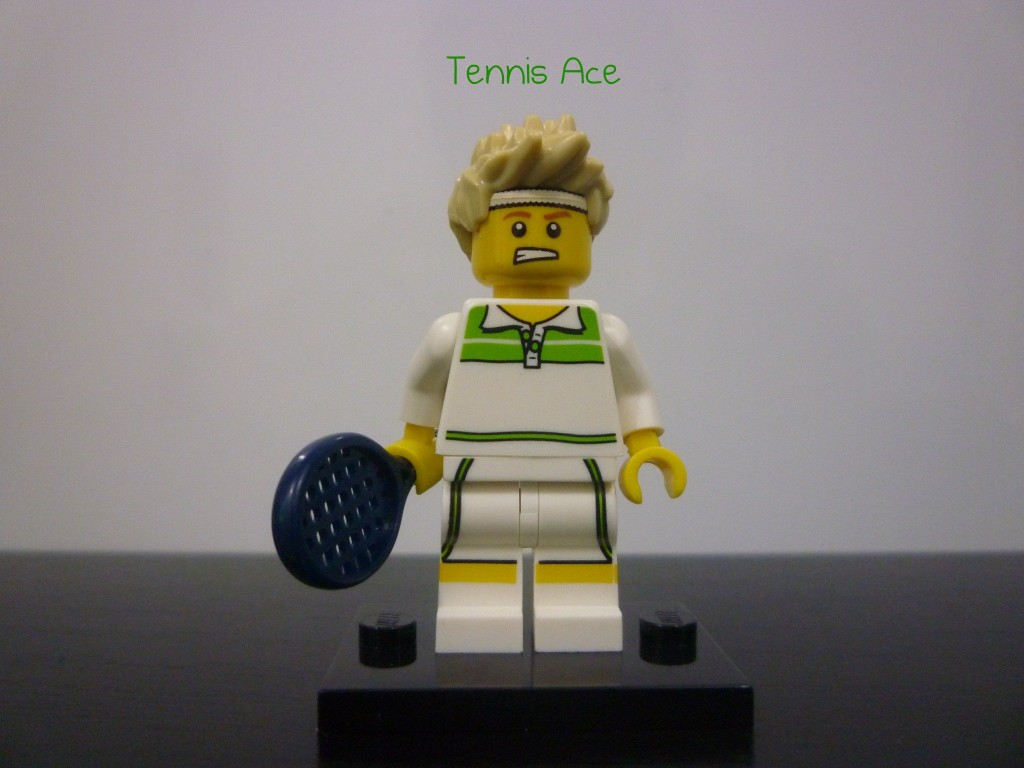 Call me kooky, but I simply love the attention Lego has been putting into athlete-type minifigs. We’ve got football, hockey and baseball players (okay Sumo too if you’re counting) and now we get a second tennis player, sporting a Y chromosome! The racquet in dark blue is new and we get a whole new sand-coloured spiky hairpiece which we first saw on Series 6’s Sleepyhead. I think this is the coolest and trendiest hair piece Lego has ever created and it looks amazing in this colour. The light sand colour really brings out the spikes and texture of the hair piece. We get a standard Wimbledon-inspired tennis attire and that look of determination (complete with headband to mop up the sweat) that all great tennis players have. 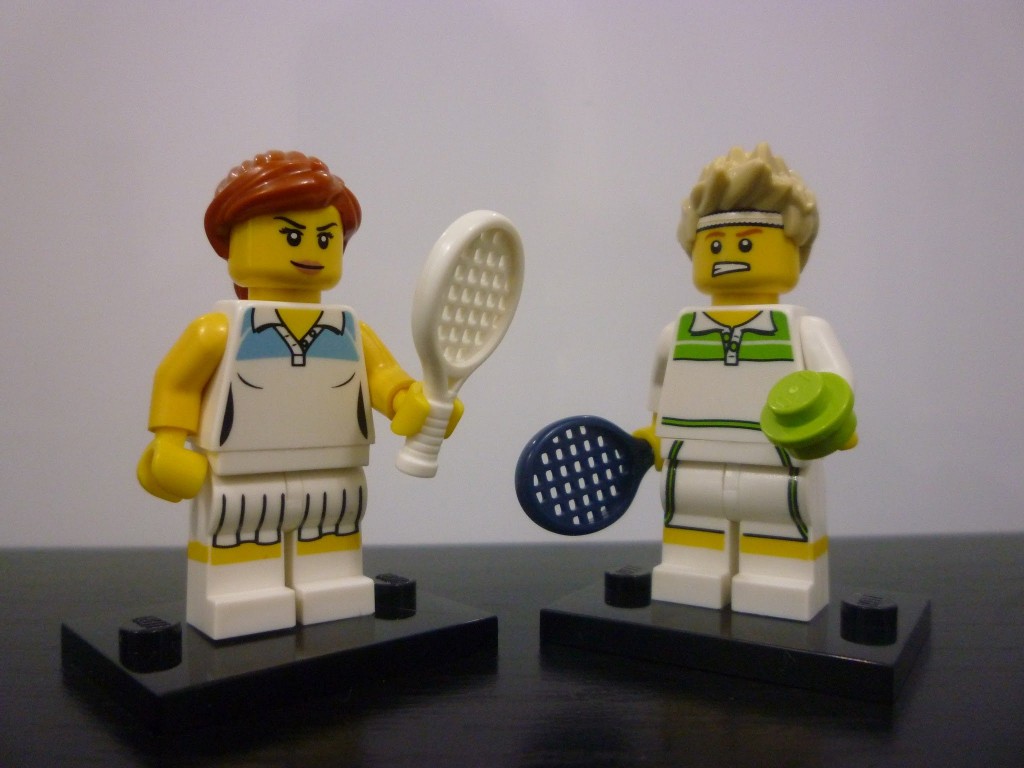 Here’s a side-by-side comparison with Series 2’s Female Tennis Player. I like the male tennis player’s outfit save for the pants. The green lining on the side makes it look a little weird and not pants-like at all. Still a solid minifig, and an obligatory one to purchase if you already have the female player.

How To Find One: Pretty easy. Just look out for the tennis racquet which has a very distinct shape. You can also try checking for his spiky hair which kinda feels like a porcupine from outside the packet. 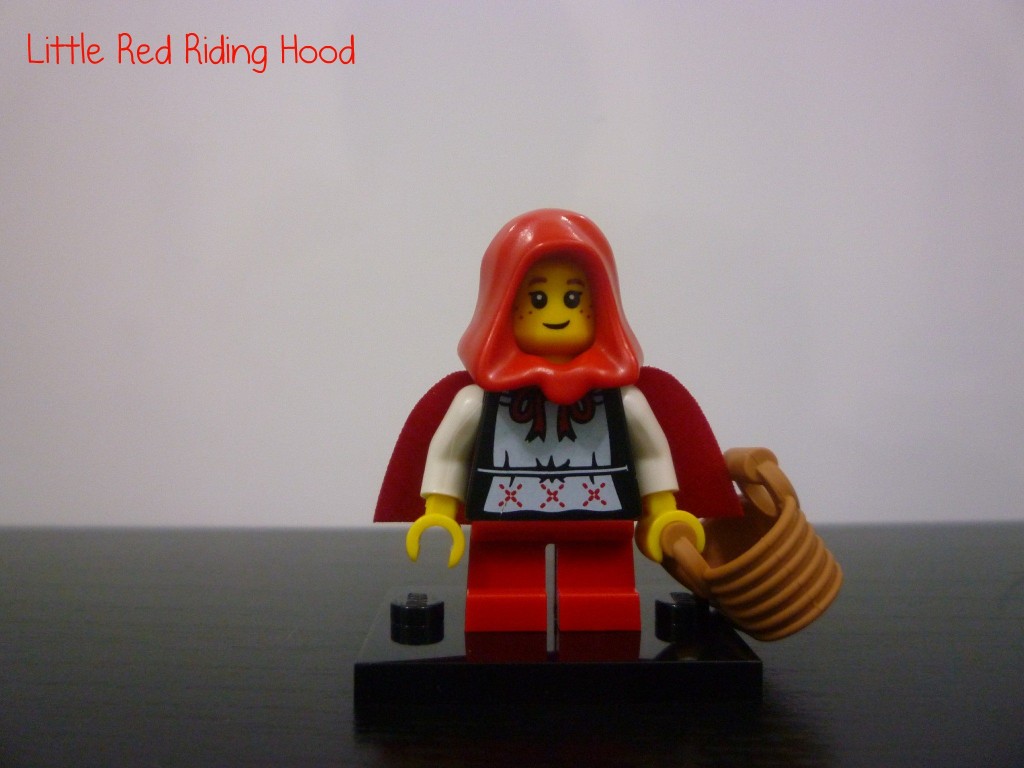 Presenting the most ridiculously titled minifig… The Grandma Visitor. Yes. Grandma Visitor. Let that sink in. Done? Good, because we are never going to call it that ever again. I don’t know what possessed Lego to NOT name this Little Red Riding Hood. Definitely not copyright issues because the fable was created in 1697. Maybe they just don’t want to be found out to be ripping off pop culture characters. Who knows. Anyhow, arguably the most adorable minifig of Series 7, Red Riding Hood has all the trappings of a little girl off to visit her grandmother. She’s donned a bright red cowl and carries a basket, which is made out of spongy rubbery plastic and not regular ABS plastic. She’s got those stout unbendable legs and my favourite part is that she has a custom length cape behind her, cut perfectly to suit her height. I expect the Hobbits in the LotR theme to come with these shorter capes as well. Great attention to detail by Lego. All in all, an okay minifig, nothing overly special but great to see Lego giving the nod to fables and fairy tales.

How To Find One: Look out for the stumpy legs. Red Riding Hood is the only minifig in this series with the squat unmovable legs. The basket is also easy to spot since it’s made out of squishy rubbery plastic.

Swimming Champion “It’s all in the kicking!” 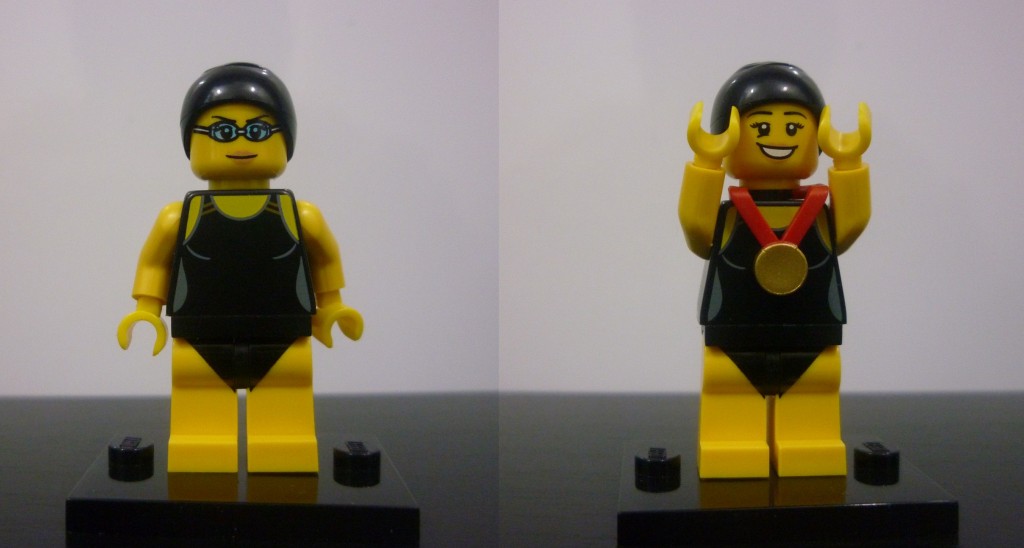 TWO athlete minifigs in a single series? We haven’t been this lucky since (the largely forgettable) Series 2! And what a unique choice, to give us a Swimmer! She has a 2-sided head, one with goggles (!!) printed on and the other without, showing her triumphant lok as she’s awarded with a gold medal! Seriously, the medal is one of the cooler new accessories that Lego has come up with. It fits around the minifig neck, the same way a cape does and is also made out of spongy rubbery Lego material. 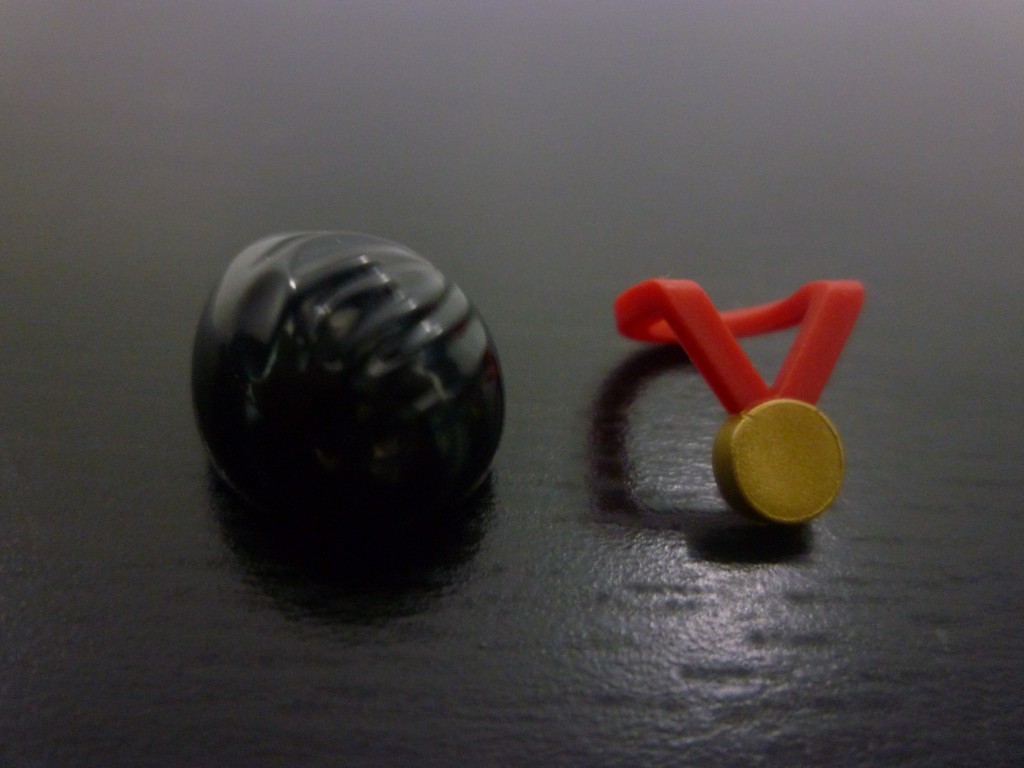 We also get a swimming cap, which has the wrinkle effect going for it. Here’s a close up shot of both the medal and cap. Very neat. 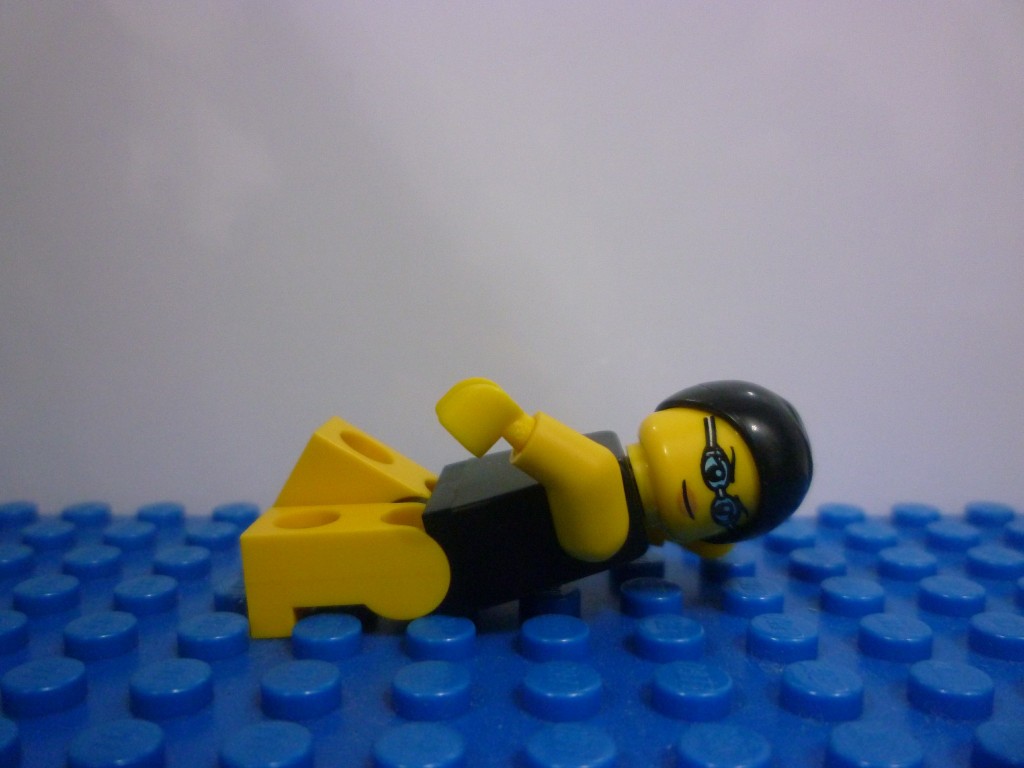 I was too lazy to construct an actual swimming pool, so here’s the swimmer paddlin’ her way across a blue base plate towards her gold medal.

How To Find One: The swimmer is a little tricky but try to find the medal. The medal is made of rubbery bendable plastic and it feels quite strange and unlike any other element normally present in the entire Minifig series. 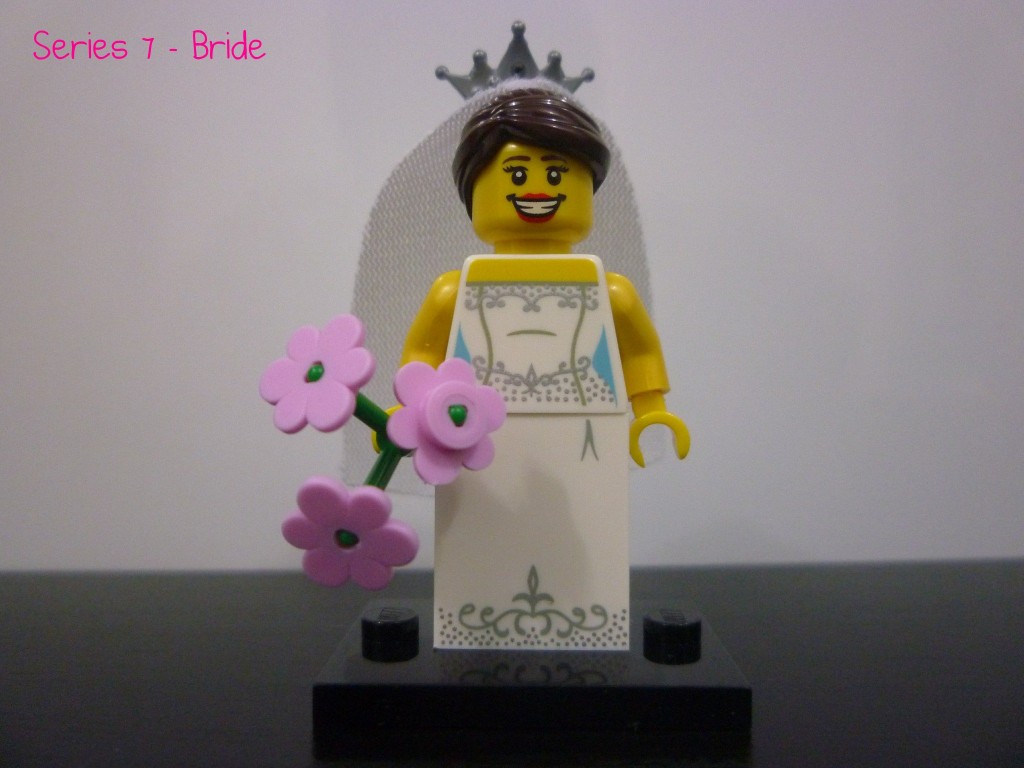 Massive props to Lego for including a minifigure with such great utility to Series 7. This isn’t the first time Lego have done Brides, with one making an appearance on the Lego Wedding Favour set, and Town Hall but this particular one is arguably the best out of the lot. First up, we get a neat new hairpiece which comes with a slot to pop in the tiara. We also get a really neat veil AND more handheld bouquets! The bride has one of the slope dresses for her legs, which makes her tower above a regular male minifig. The design on her torso and dress is pretty nice, she’s got a corset thing going on and her waist is painted so that the minifig looks a lot slimmer and less blocky. It works. No back printing unfortunately. Personally, I would have loved if they’d include some knots on the back to give it a full fledged bodice look. 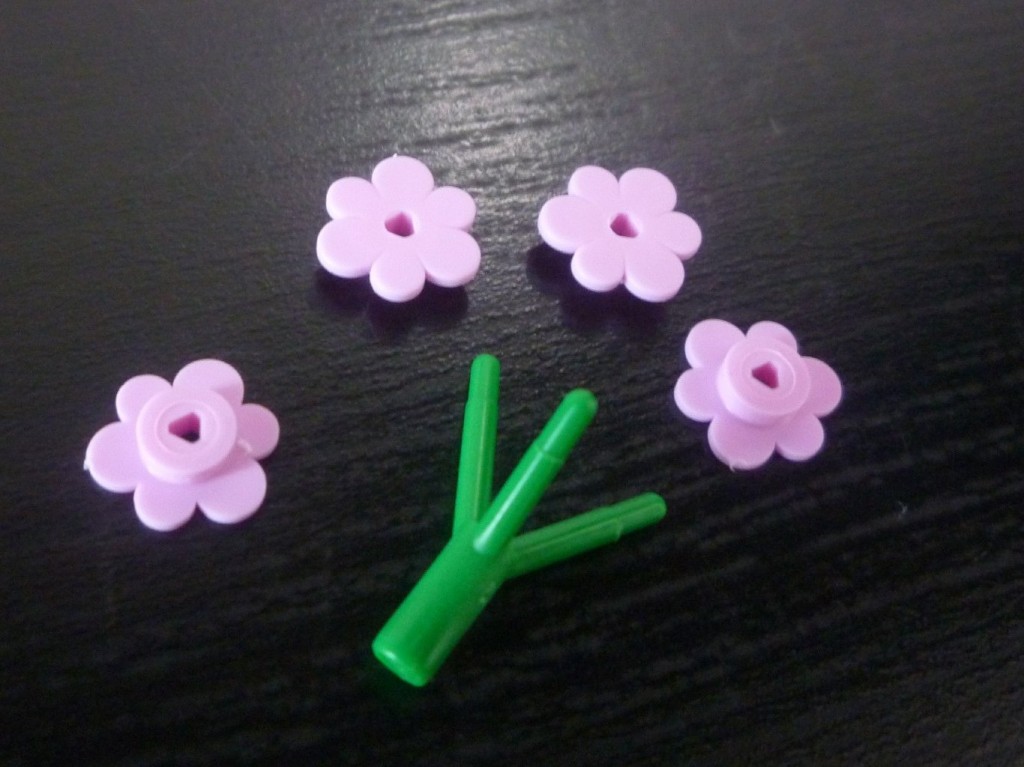 Here’s a closeup of the bouquet. 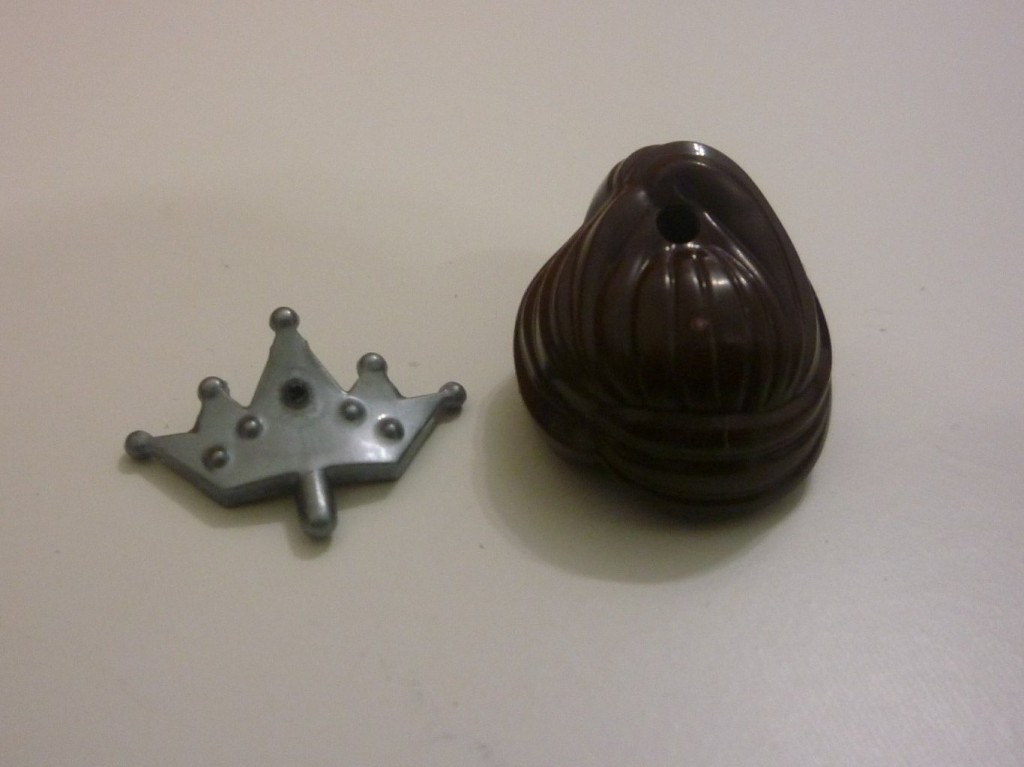 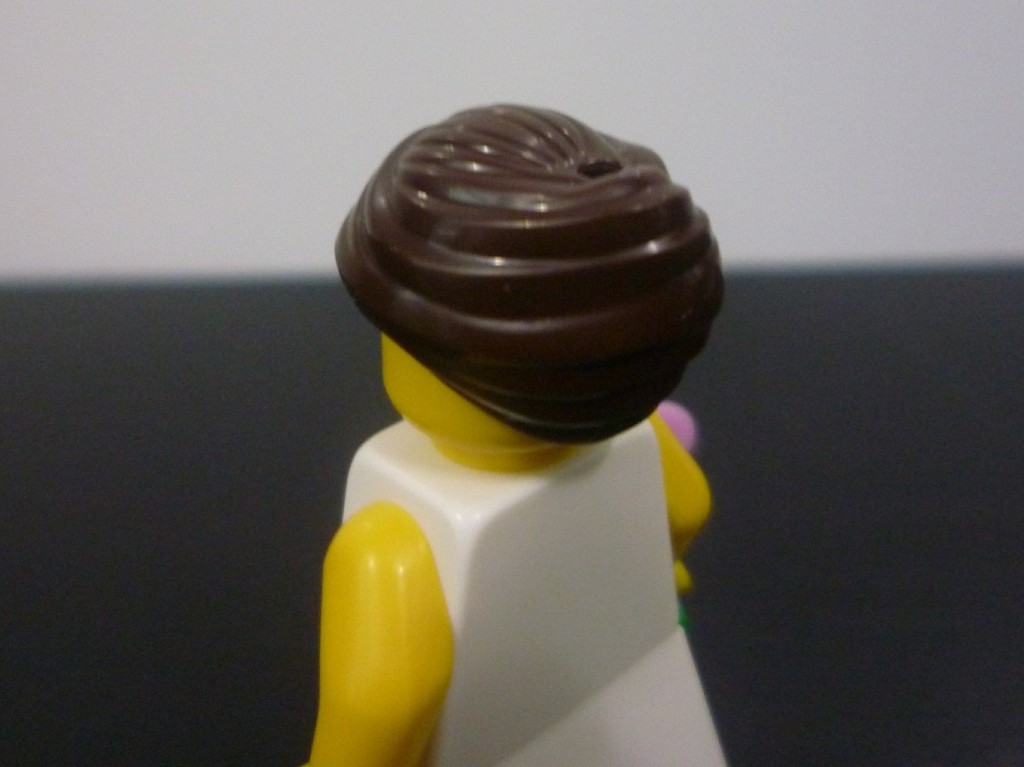 Very cool, and very wedding-ey. The little hole where the tiara gets inserted to is also compatible with the whole raft of Friends accessories, which gives this hairpiece a whole ton of usability outside of wedding scenes. 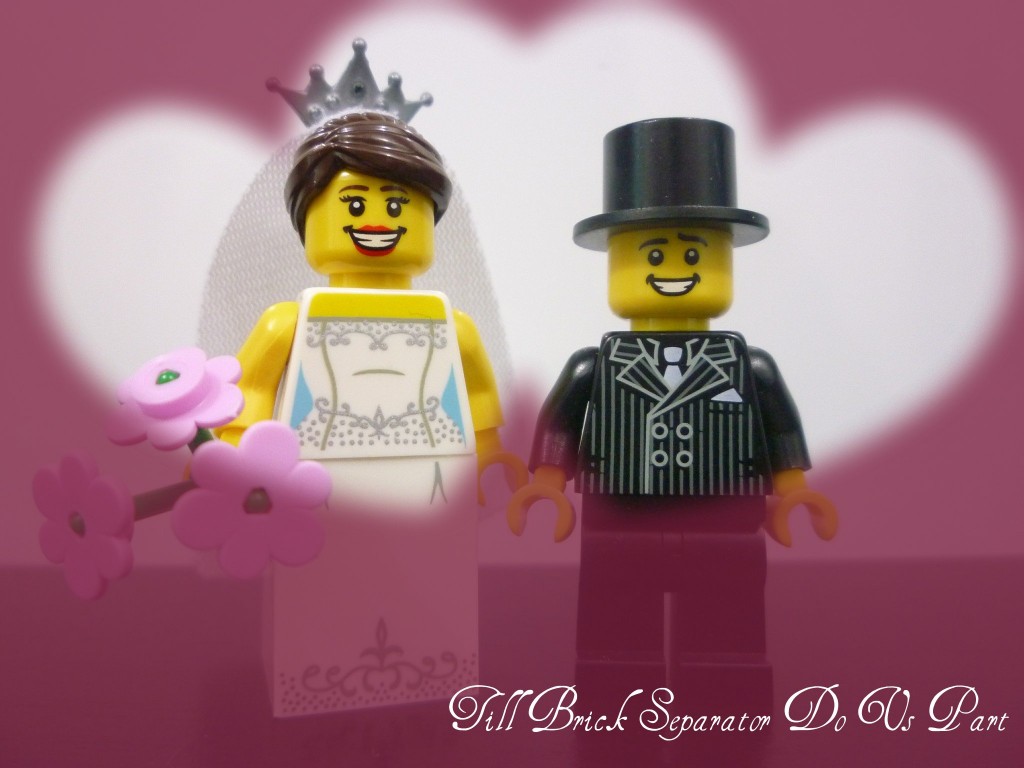 How To Find One: Find the sloped dress. Once you’ve got a slope, check for weapons. If it has weapons (sword and shield) or a blocky hairpiece, you’ve got yourself a Valkyrie (viking woman). If all you’ve got is a slope without any noticeable weapons, the bride is yours! Also helps if you can feel for the flower stalk, but just be careful that you don’t net the hippie! 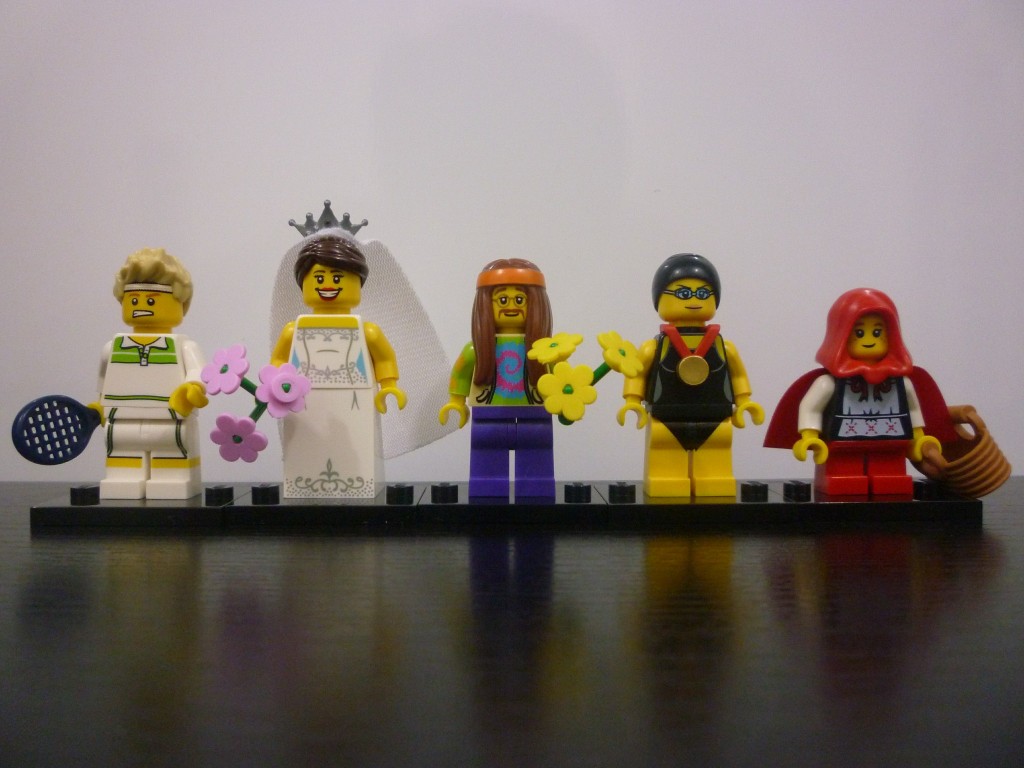 Here’s the lineup of the first 5 minifigs out of Series 7 so far. I would say that apart from the Hippie and Swimming Champion, they so far seem okay, and you must be wondering, what’s the big fuss about Series 7? Why are they the best Collectible Minifigure Series out of the lot? Well, let’s just say that the most average minifigs are now out of the way, so stay tuned for Part 2 and 3!