Well, after the little distraction involving bunnies, I’m finally done with part 2 of my review of Series 7! After getting most of the more mundane (a very loose term seeing as how Series 7 is filled with outstanding characters) ones out of the way in Part 1, we’re down to checking out the second batch of Series 7 minifigs!

In case you were thinking of hunting these minifigs down, your best bet would be either Brickboy or Toys R Us. To help you in your hunt, here’s a handy breakdown so you understand how often the minifig you want shows up in a box. Each fresh box of Series 7 Collectible Minifigures contains 60 packets of random minifigs. If you have deft fingers, it shouldn’t be a problem figuring out which ones you’ll get before you pop them open.

Here’s the breakd0wn per box.

To make it easier, I’ve inserted a tip under each minifigure’s review to help you on your search. Part 1 has been updated as well! Good luck hunting! 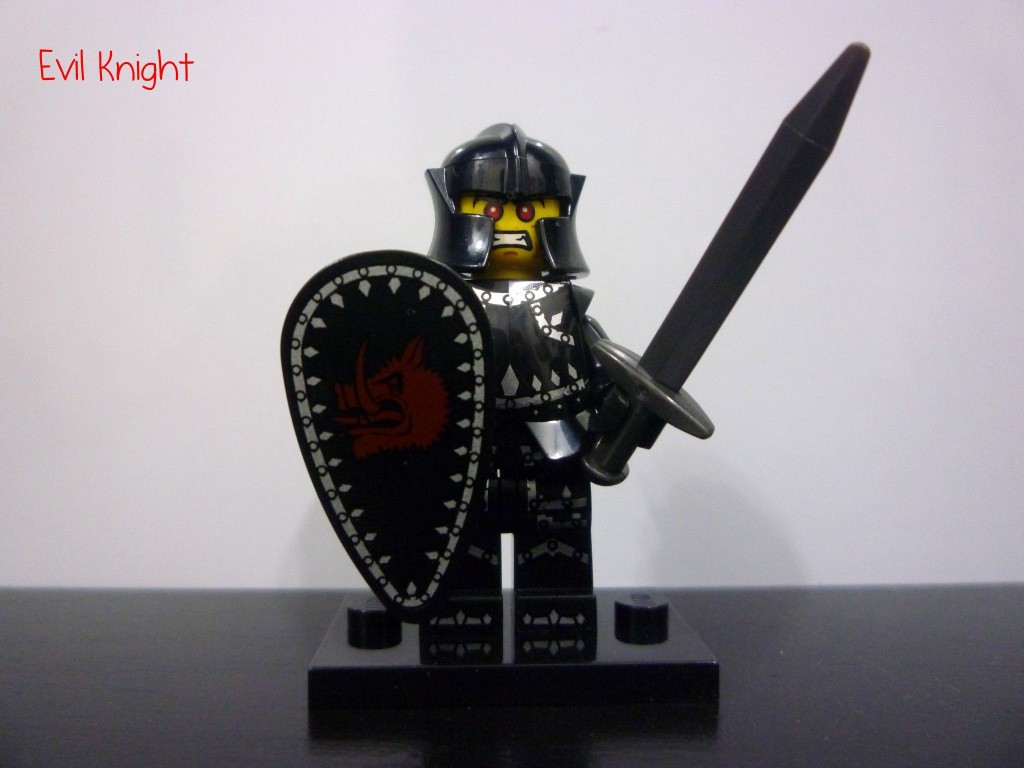 Here we have one of my favourites out of the whole series. At first glance, the Evil Knight doesn’t seem THAT outstanding. We’ve got a decent helm, angry evil looking eyes befit of an evil knight. The printing on his breastplate is alright, quite detailed and I like that they used shiny paint for the details. His sword is one of the newer LotR type swords which we were introduced by Series 6’s highlander.. but wait… the shield. Where have I seen that sigil before? 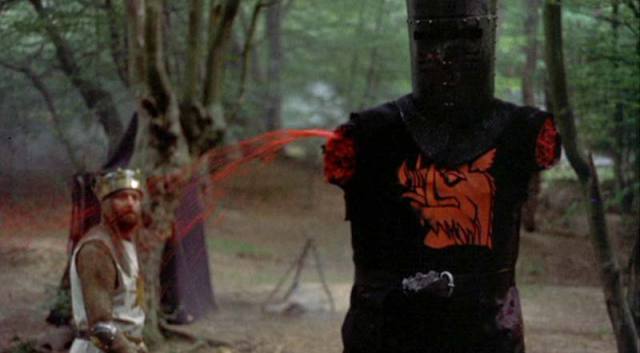 If you’ve guessed Monty Python and The Holy Grail you are absolutely correct and such a huge nerd! I was BLOWN AWAY when I made the connection! In case you’re wondering, Monty Python and The Holy Grail is one of my favourite movies of all time and I can easily recite dialogue word for word from the epic comedy. Huge, huge, huge kudos to Lego for putting together such a spectacular homage to one of the British cinema’s most beloved comedies of all time. 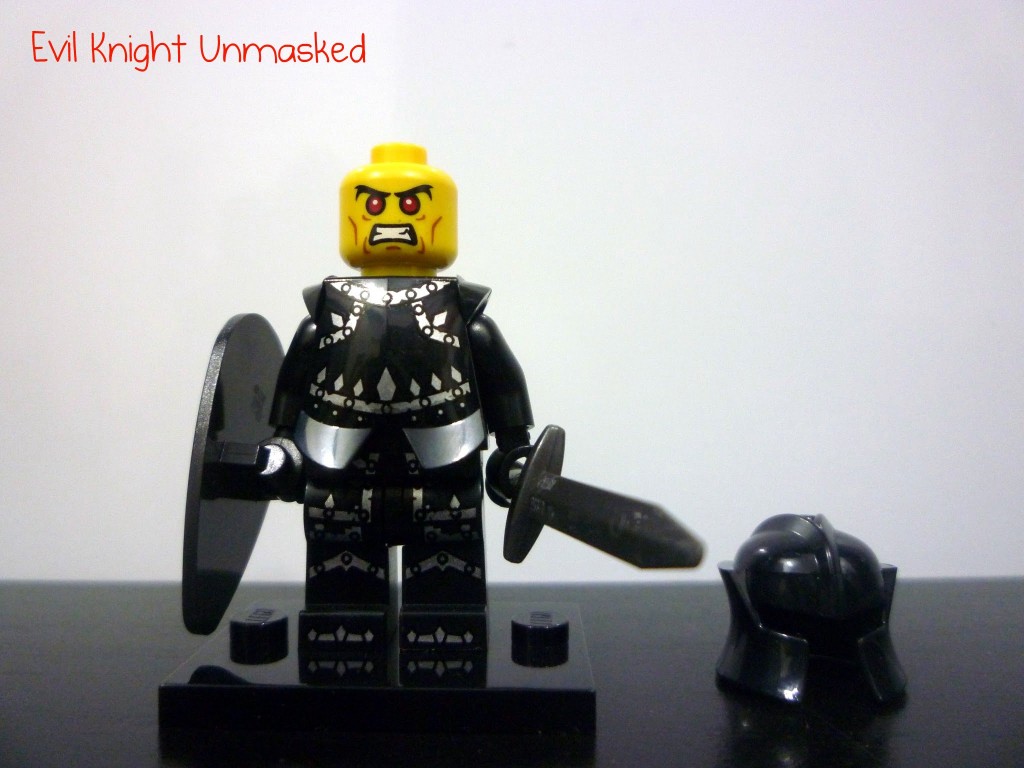 Here’s the evil knight unmasked to reveal some really sinister looking eyes! Oh, I also like that Lego brought back one of the more classic looking shields instead of the triangle or round shapes ones for the Evil Knight. Overall, a very aesthetically pleasing minifig which will come in handy if you’re a fan of medieval MOCs. I would’ve liked it if his breastplate had back printing, but meh, hard to stay unsatisfied at a minifigure paying homage to Monty Python!

How To Find One: Look out for the shield and sword. The sword is unique in that it has a wider quillon (that’s the 2 pointy things on the hilt) than the Valkyrie’s one. The shield is absolutely easy to find since it’s teardrop-shaped. You could also try to spot the breastplate if you’re lucky as it can be pressed together slightly.

Daredevil “Stunts are easy…it’s all the other stuff that takes nerves of steel!”

Now here’s another cool minifigure in the Series 7 roster, a Daredevil stuntman-type guy modeled after Stuntman, entertainer and daredevil extraordinnaire, Evil Knievel. The colour scheme really captures the feel of Evil Knievel and I like that we were given 2 headpieces, a helmet with cool trans-blue visor as well as an ‘Elvis’ hairpiece in light brown.  As another bonus, we also get a reversible head, with one side showing the Daredevil’s devil may care attitude and the other displaying a look of pure terror! Very nice touch. I also like the pure-white cape. If you zoom in, he’s got the letters “MF” printed on his belt which I guess stands for “Minifigures” or maybe it’s his name. 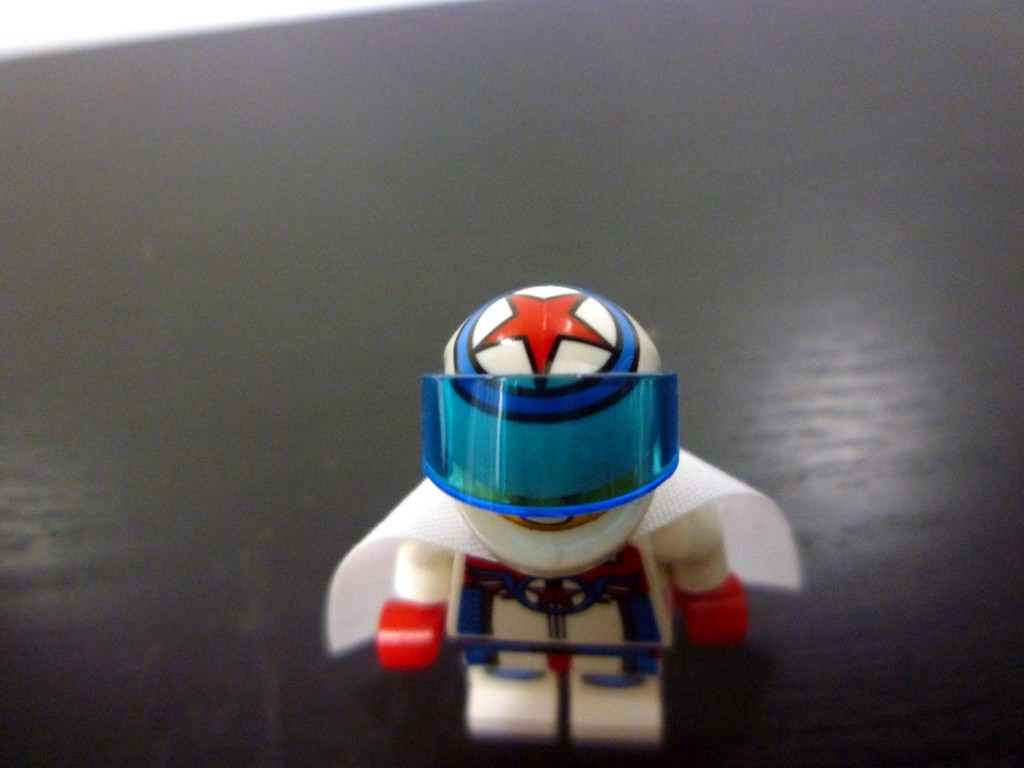 Here’s a closeup of the Daredevil’s helmet. The star print on it is really cool, matching the design on his torso. Again, no back printing, but that’s okay in this case seeing that the cape obstructs most of his back anyway. 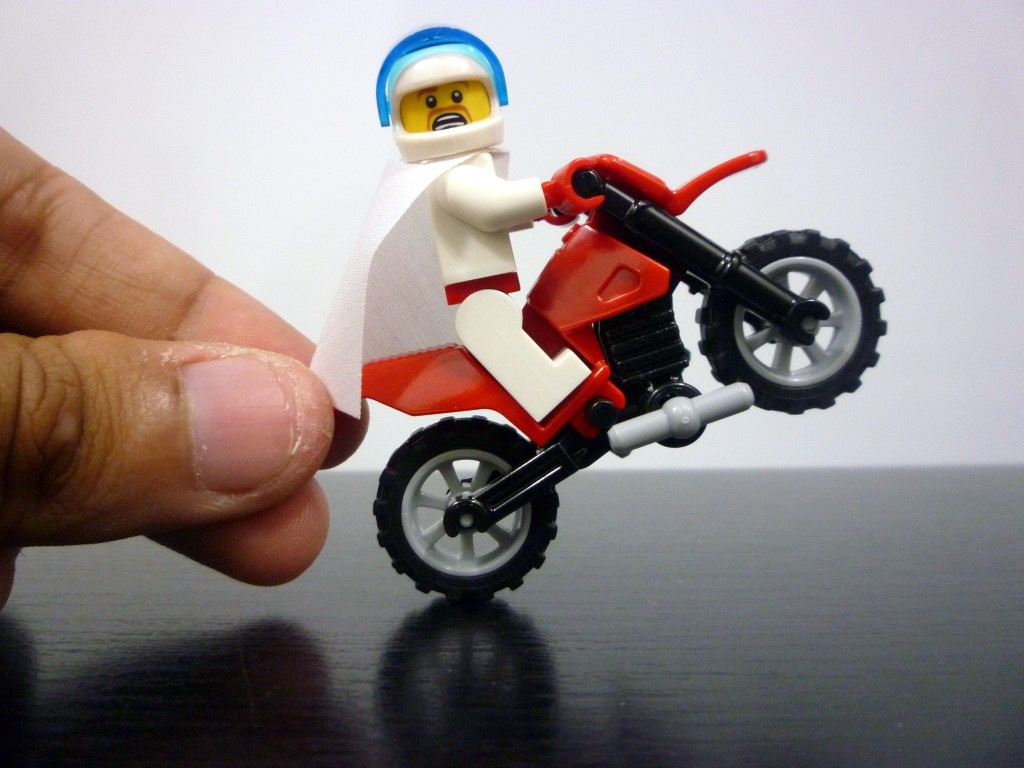 Here’s a fun action shot of the Daredevil on a dirt bike! Overall, a nice addition to the Minifig roster and bonus points of him being a civilian-type character with an exhilarating job!

How To Find One: Try spotting the visor, which is quite easy to feel out. Also helps if you can find the helmet which you can tell by the hole in the front. His hairpiece is also fairly distinct, but your best bet would be checking for the visor piece. 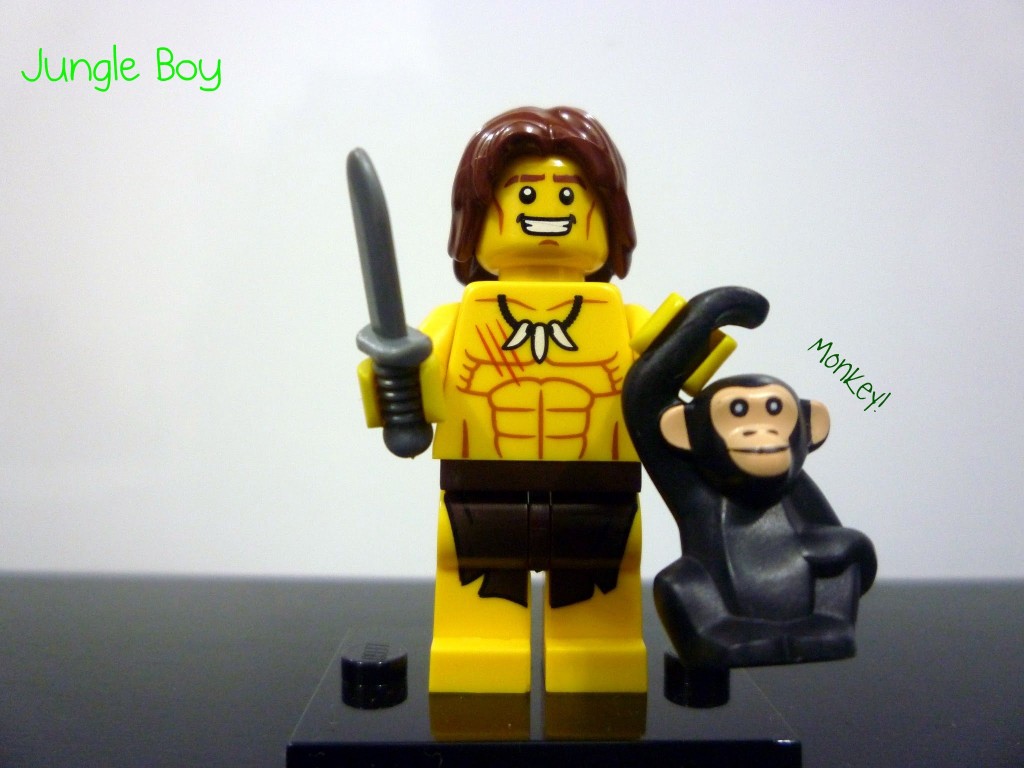 Finally, a Tarzan minifigure, and it doesn’t disappoint! We get a cool ‘Dastan from Prince of Persia’ hairpiece which comes in handy because it’s such a nice male hairpiece. Also includes are 2 knives and a monkey, similar to the Zookeper from Series 5! The torso printing is quite cool, naked male torsos are rare so having another one is great. This particular torso has a necklace made out of teeth(?) or bones or something and I love the scratch on the upper right part. Looks like Jungle Boy doesn’t get along too well with his monkey friend. This minifig isn’t much to shout about but it’s a nice addition overall.

How To Find One: Not a lot to work with here, so I suggest going for the monkey. You can easily spot the monkey’s hand (the one that is graspable) and double checking for the hole on the bottom where it fits to a stud.

Bagpiper “And here’s a little ditty my ol’ granddad taught me!” 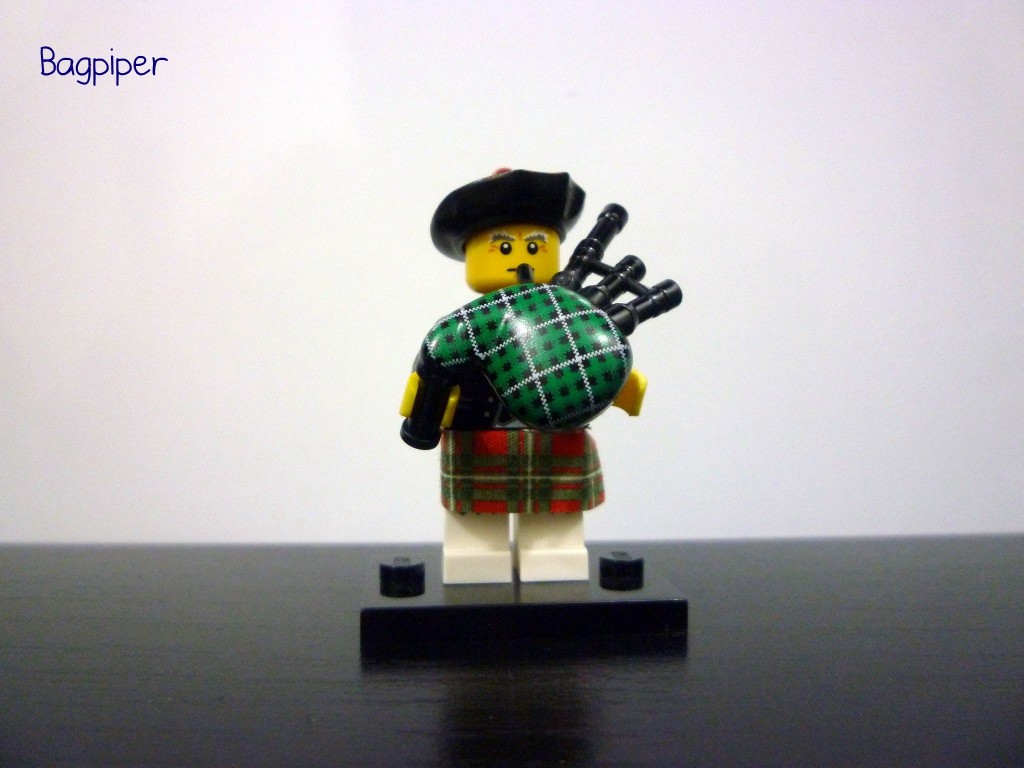 Oh boy, as if we didn’t know that Lego has absolutely pulled out all the stops for Series 7, we get thrown this absolute beauty of a minifig. A Scottish Bagpiper, complete with an immaculately designed bagpipe! Are my use of hyperbolic adjectives not clueing you guys in on your awesome I think the bagpiper is? Lego absolutely nailed the the look and feel of a bagpiper right down to the incredible tartan kilt, hat and bagpipe.

Okay first up, that tartan beret he’s sporting has gotta be one of the most awesome headgears ever produced by Lego. They nail the design and general shape of the hat and DAT TARTAN print just oozes coolness. This is one accessory that’s going to see a lot of use for stylish and hip civilian MOCs. And that bagpipe, wow. I am all for more Lego musical instruments, we’ve already got a sweet flying V guitar made as well as some maracas, and this bagpipe was such a nice surprise. It’s so well designed that the mouthpiece lines up almost perfectly to the minifig’s mouth. Oh and the attention to detail doesn’t stop there. 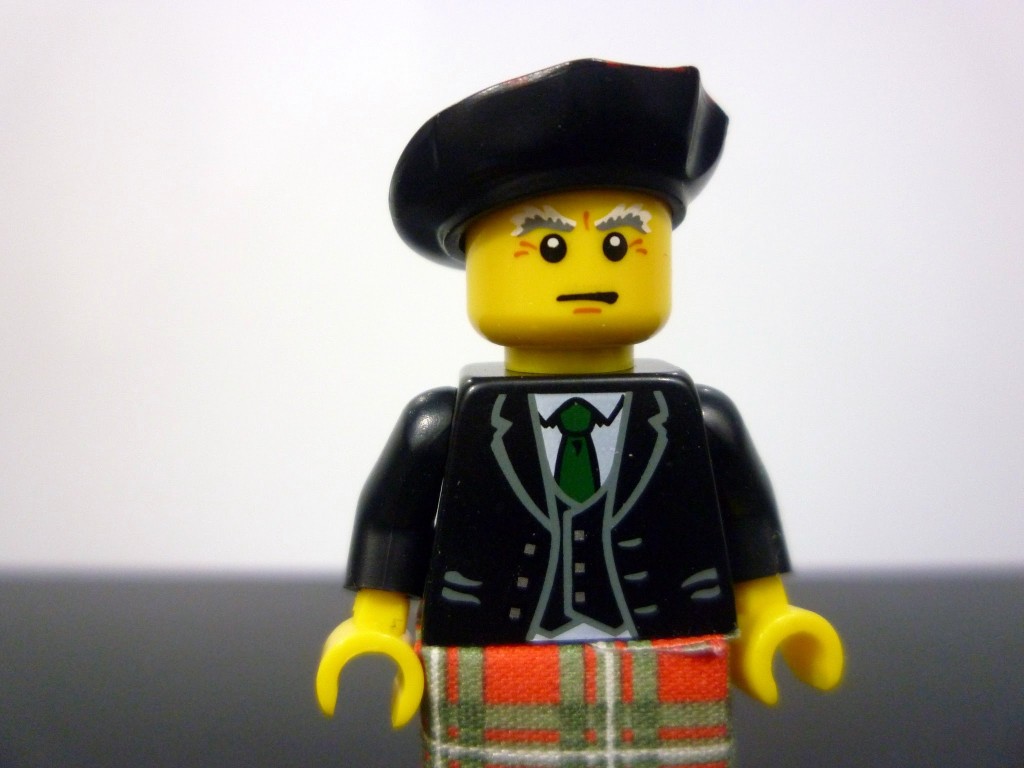 Here’s a closeup of the bagpiper. First up, the torso print is so damn impressive. Look at that vest within the jacket and the tie. The tie even has a small indent in it to give it the illusion of texture! The facial expression is perfect, somber enough for a funeral, complete with grey eyebrows flecked with some white.. and THAT mouth. If you look closely, you’ll see that there’s a spot at the end of his smile that makes it look like he’s blowing into the bagpipe. Perfection in minifigure form, that’s what this is. 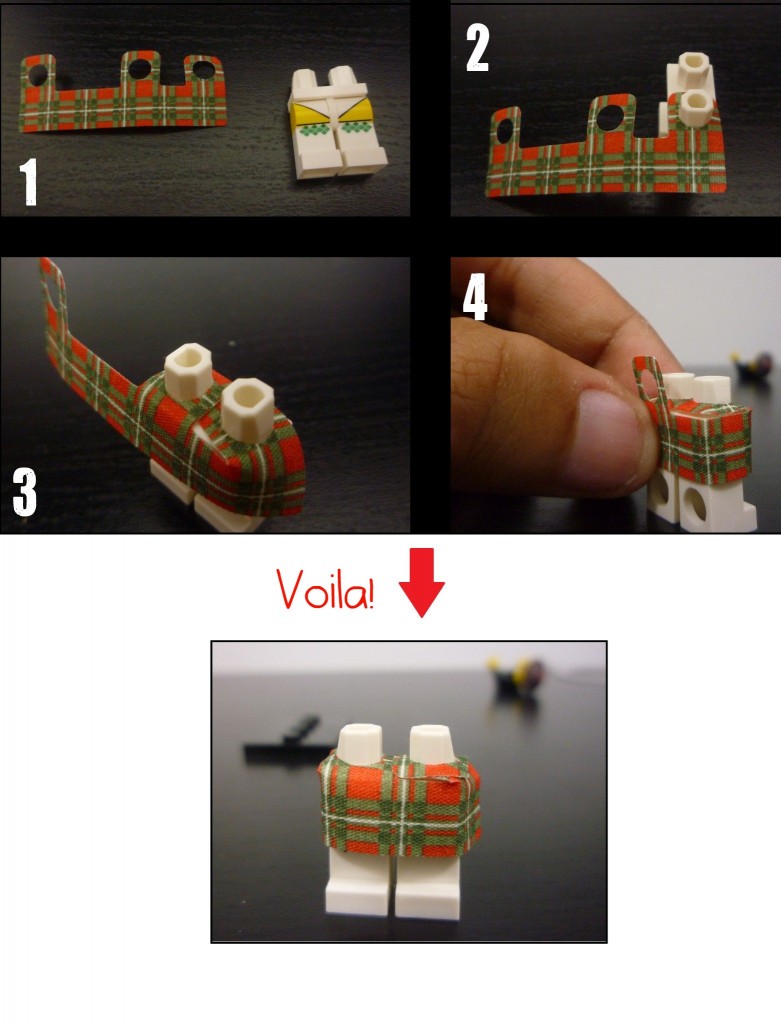 In case you were wondering on the best way to put his kilt on, here’s a step by step guide I made. Another briliant (albeit creepy) touch by Lego. Look at the legpiece. We see some white undies and knee high socks with an argyle pattern on them. Argyle originated in Scotland too! It’s a really nice tough by Lego, especially since you can’t really see the pattern with the kilt done up. This is an incredible minifig and the 10 out of 10 is well deserved.

How To Find One: Two things, look out for the bagpipe since its fairly distinct. The hat is the easiest to spot since it has a little round bump on the top of it!

Bunny Suit Guy “What kind of noise does a bunny make, anyway?” 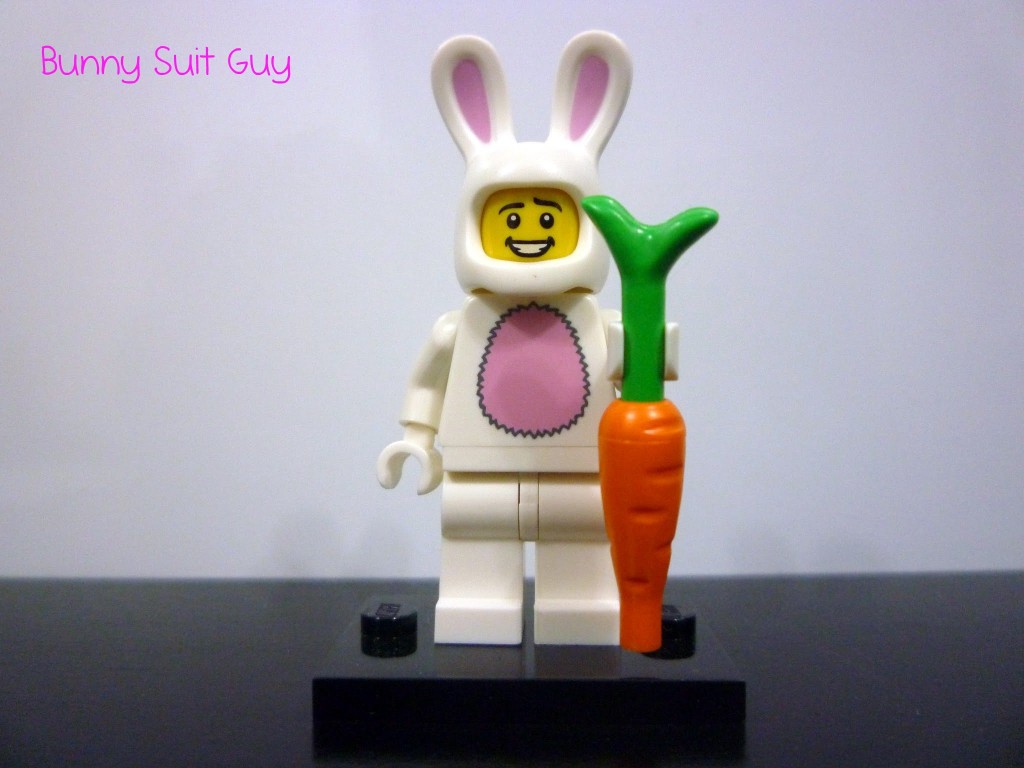 Now every now and then… Lego makes a minifig that’s just magically iconic. The Bunny Suit Guy is one of them. My obsession over the Bunny Men is well documented and honestly, I think this is one of the best minifigs that Lego has ever come up with.

IT IS JUST SO CUTE. 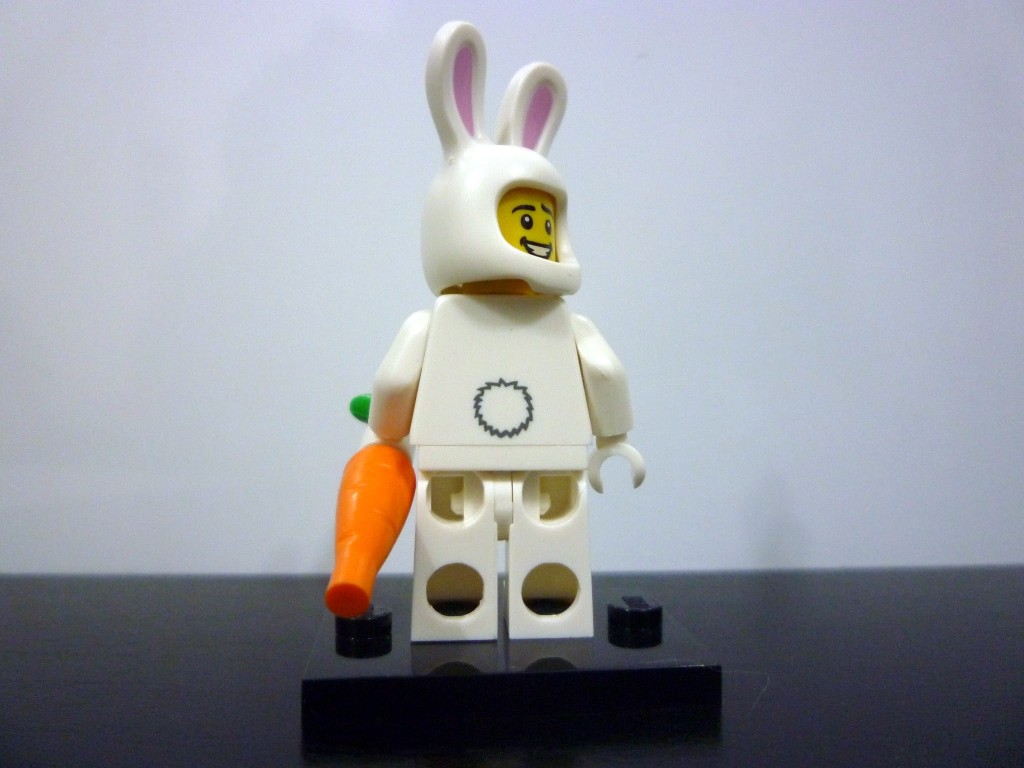 Look at little fluffy bunny tail! The Bunny Suit guy has pretty much THE MOST ADORABLE headpiece ever. You can literally put it on ANY minifig and it will be guaranteed to look absolutely ridiculous. Another endearing thing about the bunny suit guy is his crazed, slightly deranged look on his face. He looks like he has a few screws loose in his head, which would explain the bunny costume and giant carrot.

Have to say that this is my favourite Minifig out of all 7 editions of the Collectible Minifigures.

How To Find One: Look for the bunny ears. You can’t go wrong with that!

Here’s the lineup from Part 2 and their counterparts from Part 1! Stay tuned for Part 3! 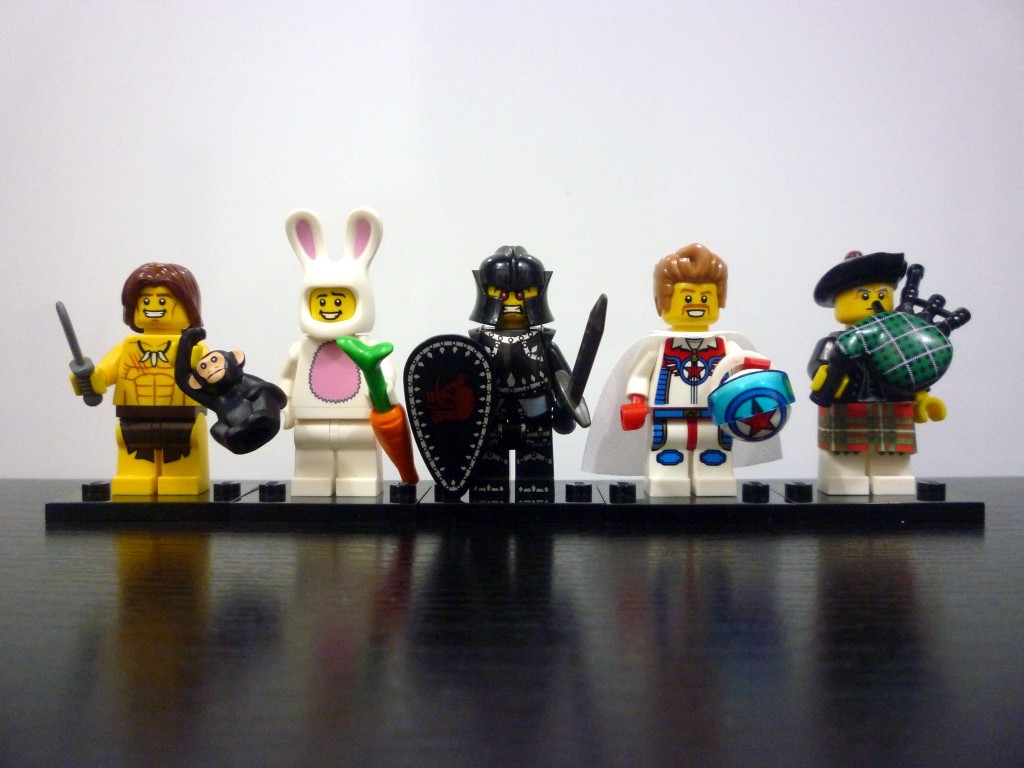 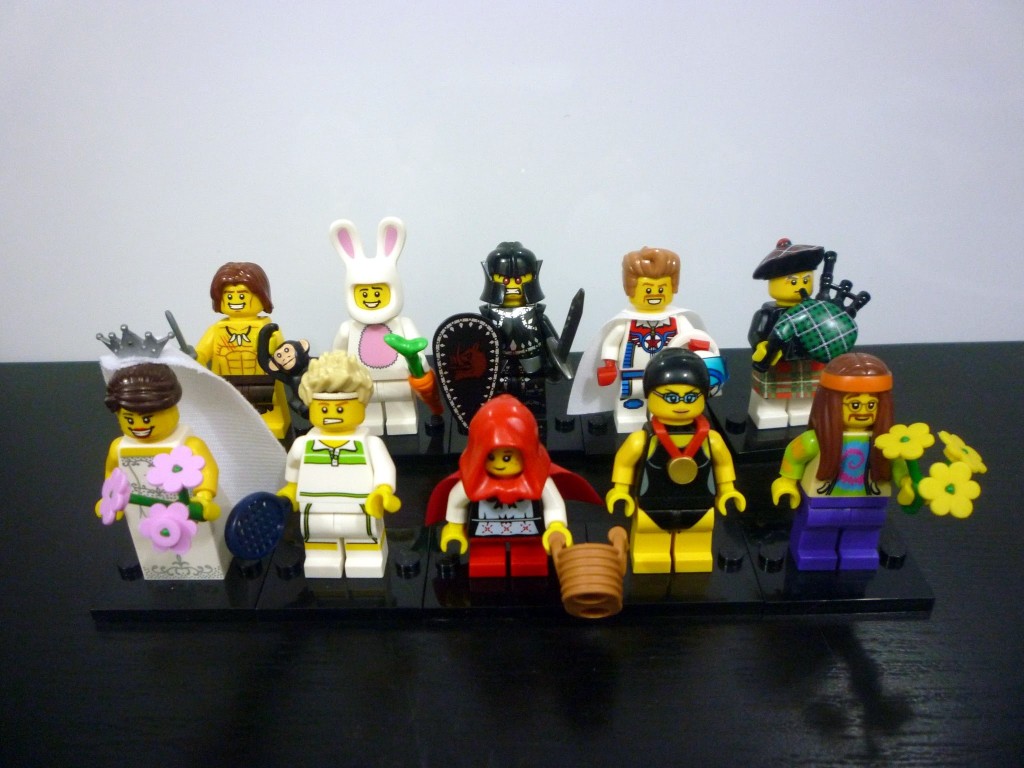