I’m very proud to introduce a new series of content on the blog called Retro LEGO Reviews! As you could probably infer from the name, it’s just like my usual run of LEGO reviews, except that I’ll be reaching deep into my vault (I don’t really have a vault) of vintage LEGO sets to photograph and revisit some really classic (not the theme) sets.

The Retro LEGO Review series won’t see me being critical about these sets – in fact, these posts won’t be real reviews but more of a celebration of a time when LEGO was a lot more simple, when instructions were a lot more complicated and to re-experience some of my most cherished Vintage sets. I’ll aim to do one of these every so often!

Most of all, I’d like you to enjoy the photography and indulge in a little bit of nostalgia.

A bit about my LEGO hobby and how I collect – over the past few years, I’ve been steadily building up my collection of vintage LEGO sets.

It first began when I decided to buy sets that I owned in my childhood that my mum “accidentally” gave away. I didn’t have a lot of LEGO growing up (7 year old me would be pretty damn proud of current me), so those sets were intertwined with very special memories of my childhood.

Because my parents couldn’t afford to buy me a lot of LEGO sets, there were always sets that I didn’t own but had always wanted – mostly because I had seen them at some of my wealthier friend’s homes, or longingly stared at the boxes at the toy store. My vintage collecting then shifted towards chasing down those sets that kid-me had always dreamed of owning.

So here we are. Growing up, one of my favourite themes was Wolfpack (I did a short review of Wolfpack Tower 5 years ago. It’s pretty bad and I will update it one day), and I was always intrigued by both factions – Wolfpack and Forestmen. I didn’t have any Forestmen sets growing up, just the odd minifigure or two but I’ve always been enamoured by them. 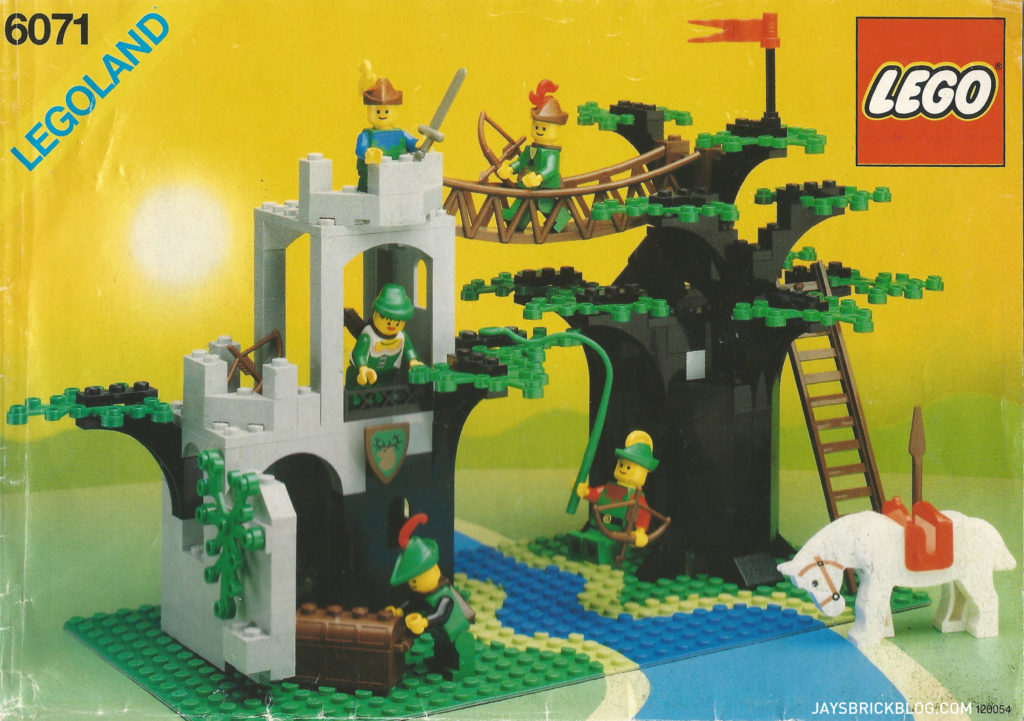 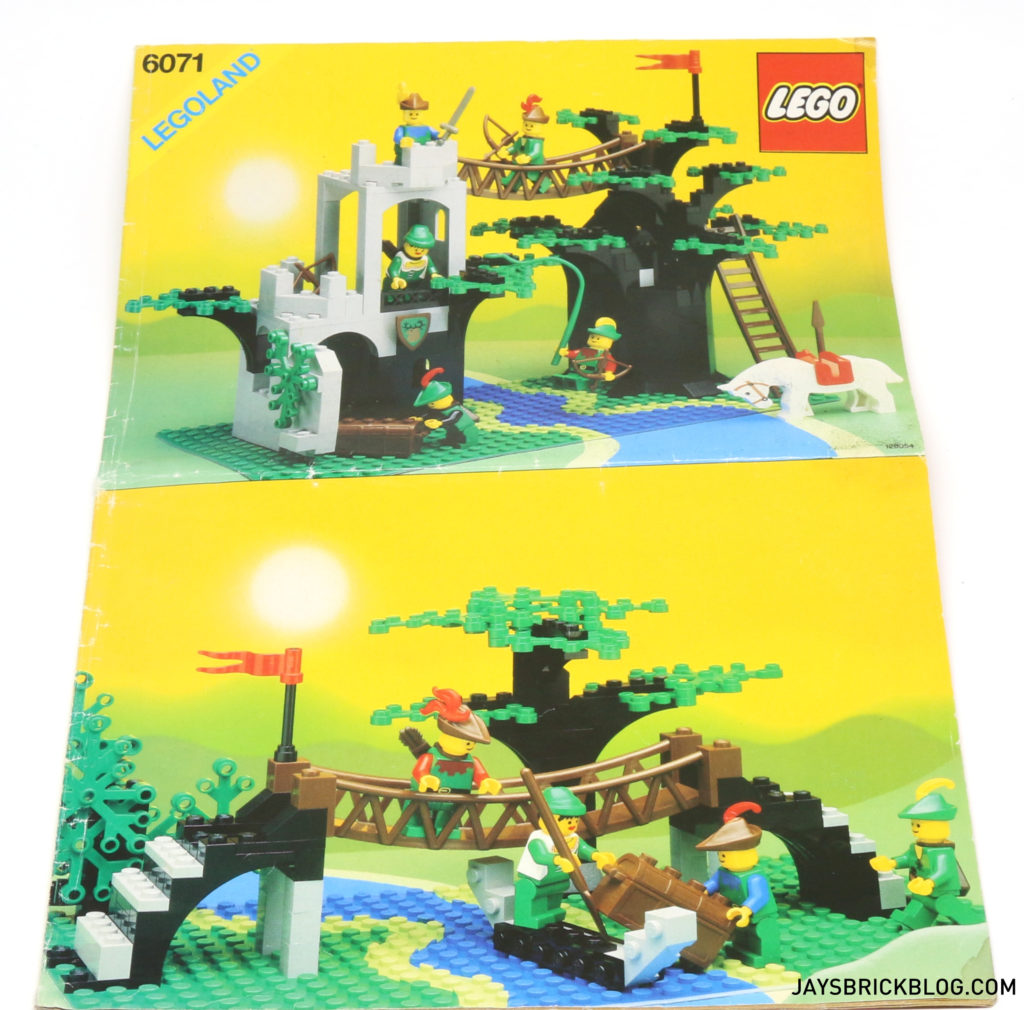 I was quite lucky with the used set that I bought which came with the instruction manual in pretty good condition. It’s quite large, almost A4 sized and I also love the alternate designs at the bottom.

There were no instructions for the alternate builds, so if you wanted to replicate them, you had to figure out the designs on your own (not that difficult most of the time). They also encouraged taking apart your LEGO sets and to build something with the parts – something that is sorely missing from contemporary LEGO sets outside of Creator. 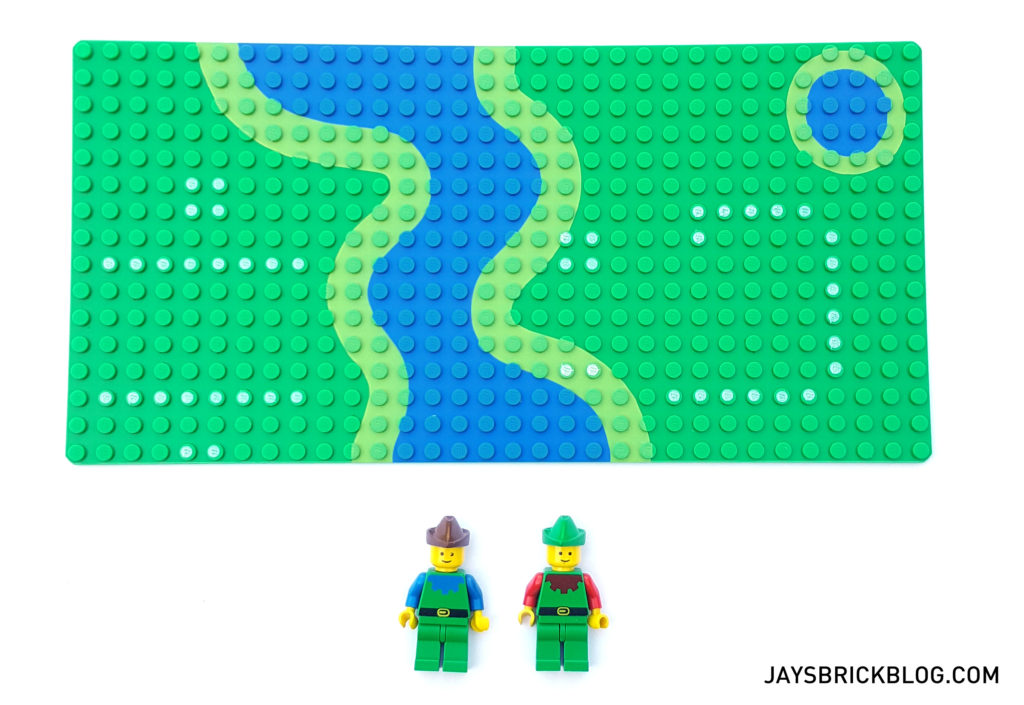 One of the reasons why Forestmen’s Crossing is so special is the gorgeous printed base plate with a stream running through the middle, as well as a small pond the corner. The white studs on the baseplate act as reference points for the build.

I really miss base plates in LEGO sets – they added so much character to older LEGO sets and I think that we’re all poorer for not having them in most modern sets. 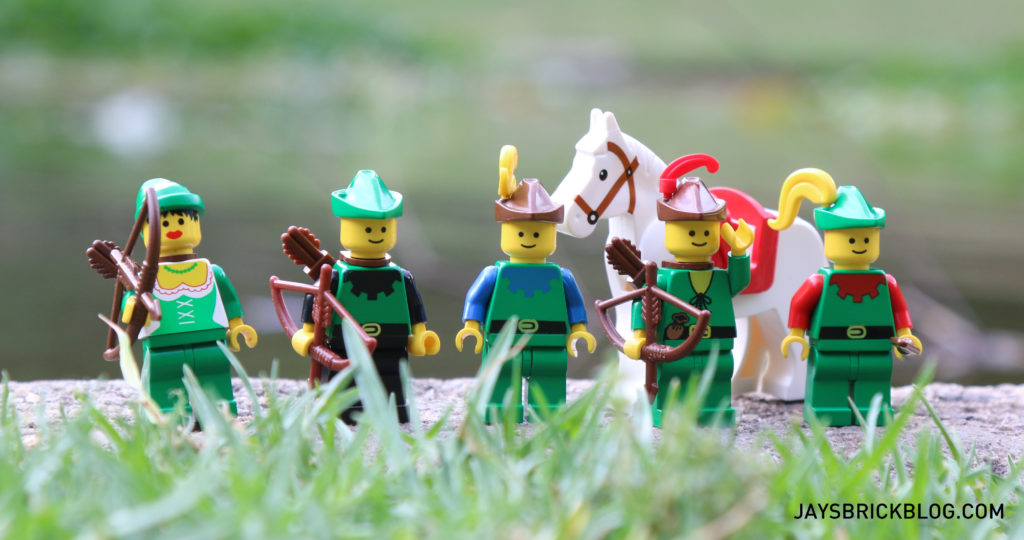 There are 5 minifigures and a white horse included in the set. Don’t mind the plumes, which aren’t 100% accurate! Forestmen is clearly LEGO’s take on Robin Hood.

Despite all of them having the classic LEGO smiley face, each Forestmen has its own personality, or insignia thanks to the different colours, iconic Forestmen hats and their plumes. 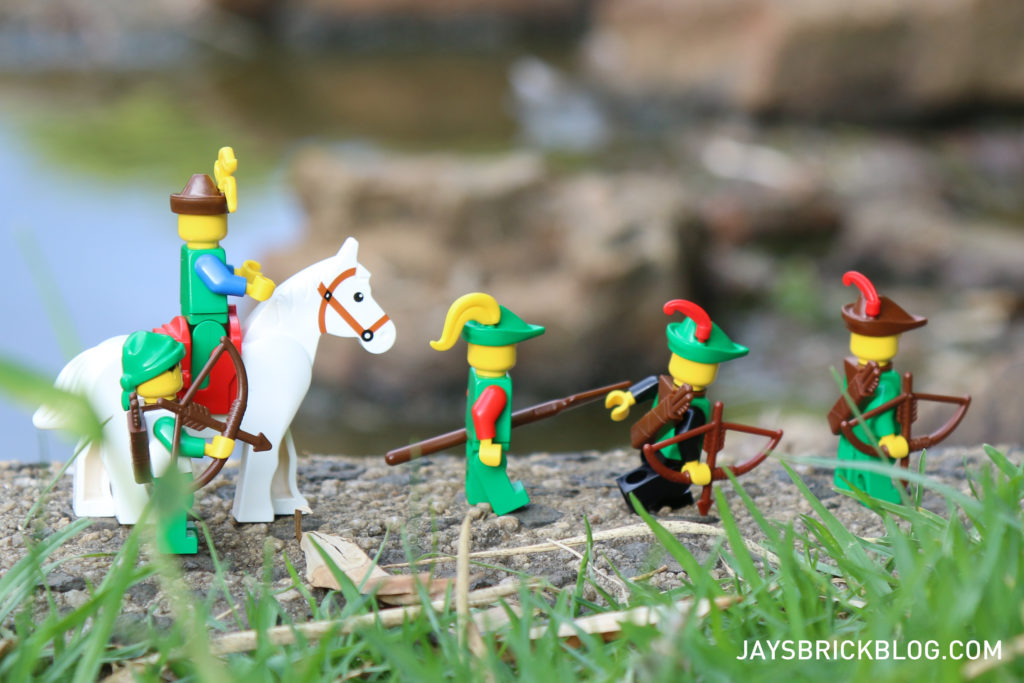 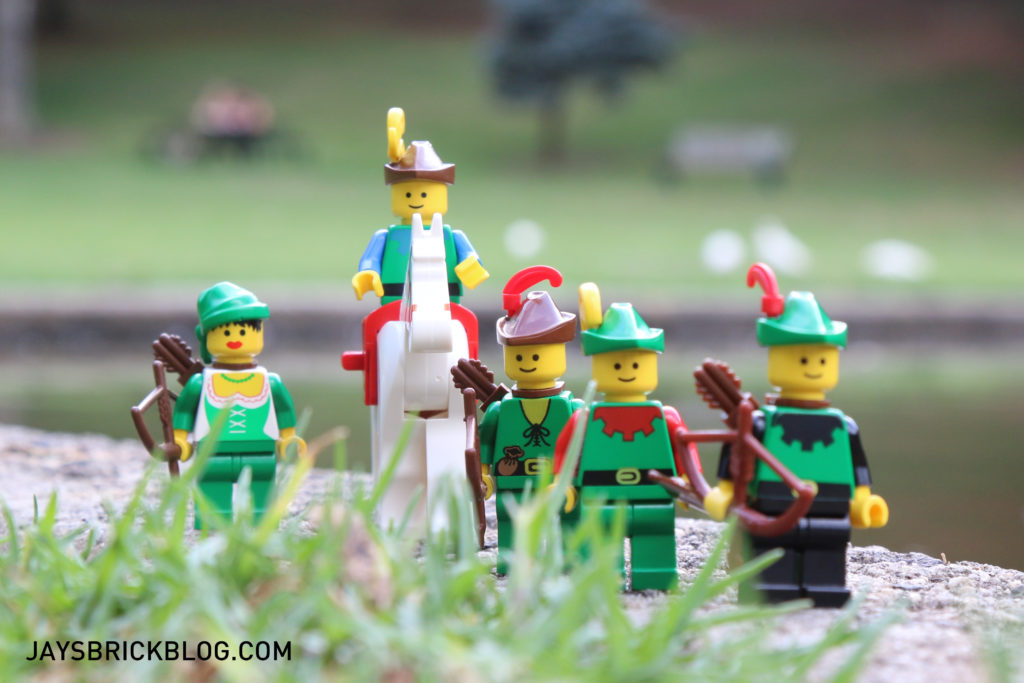 I’ve always thought of the Forestmen as kind-hearted bandits who were not caught up with the other warring Castle factions.

Much like Robin Hood, I take it that Forestmen steal from the rich to help the little guy out, and are not afraid to hold their ground when their principles or way of life is threatened. 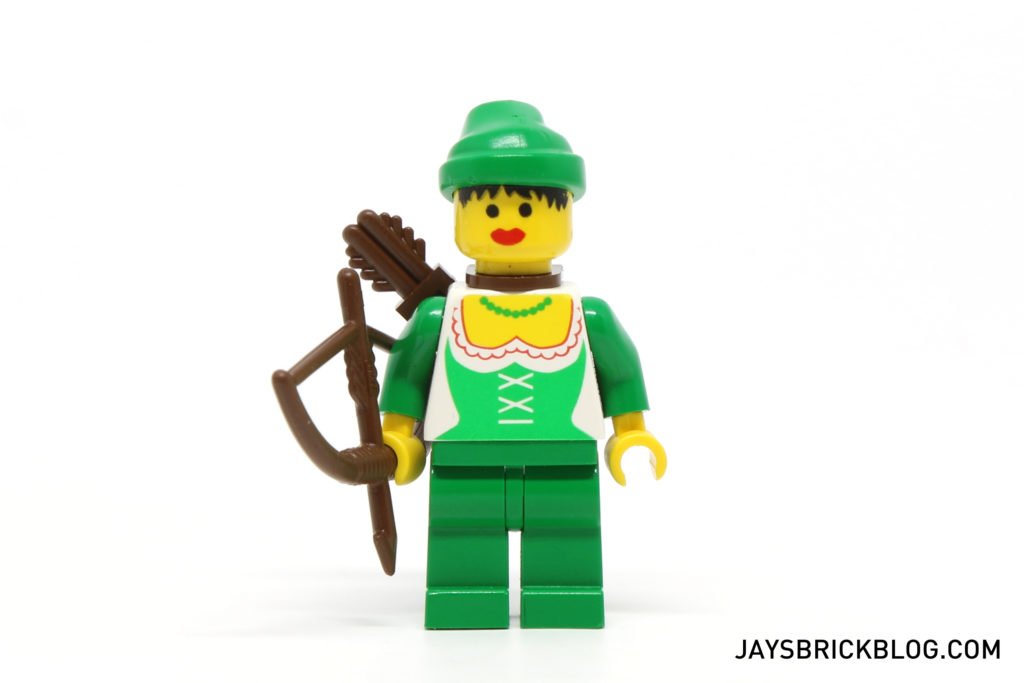 The Forestwoman minifigure is another factor behind this set’s rarity and novelty. It’s the ONLY female Forestmen character and is exclusive to this set, making her quite rare.

In an time where male minifigures far outnumbered female minifigs, the Forestwoman stood out as a pretty rare occurrence. She also stands apart from her Forestbros with her detailed minifigure head, which does look kind of out of place against the classic smiley faces.

In a theme where women were often relegated to being princesses or damsels in distress, it was really forward thinking of LEGO to give her a bow and quiver, demonstrating that she could more than hold her own amongst the ranks of Forestmen.

The Forestwoman is a pretty rare and desirable minifigure and will cost you close to AU$30 on Bricklink if you would to pick her up. She’s not a minifigure that you’d typically attribute an expensive pricetag to, but due to Forestmen’s legacy and popularity, I can see why she’s in such high demand, especially from collectors of Classic LEGO Castle. 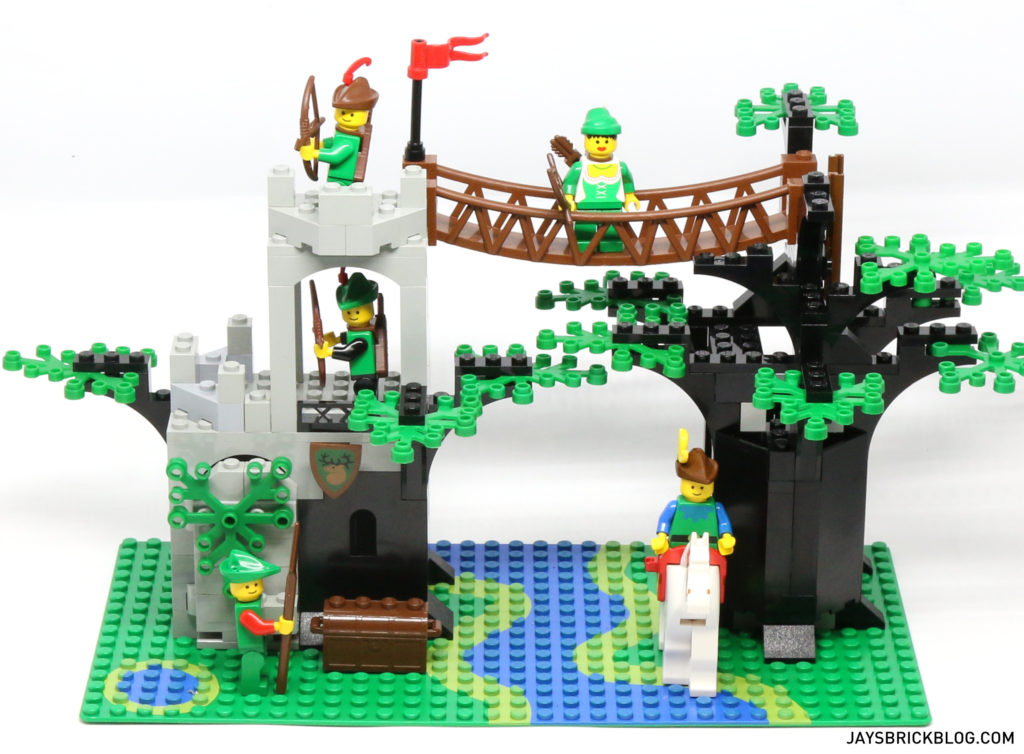 Here’s the complete set! It was such a pleasure to put it together. The build techniques and selection of elements may seem primitive by today’s standards but the aesthetics of Forestmen’s Crossing still manages to retain a lot of its charm for a 27 year-old set.

The set consists of a large tree that connects to a small tower structure on the other side of the river via a wooden bridge. 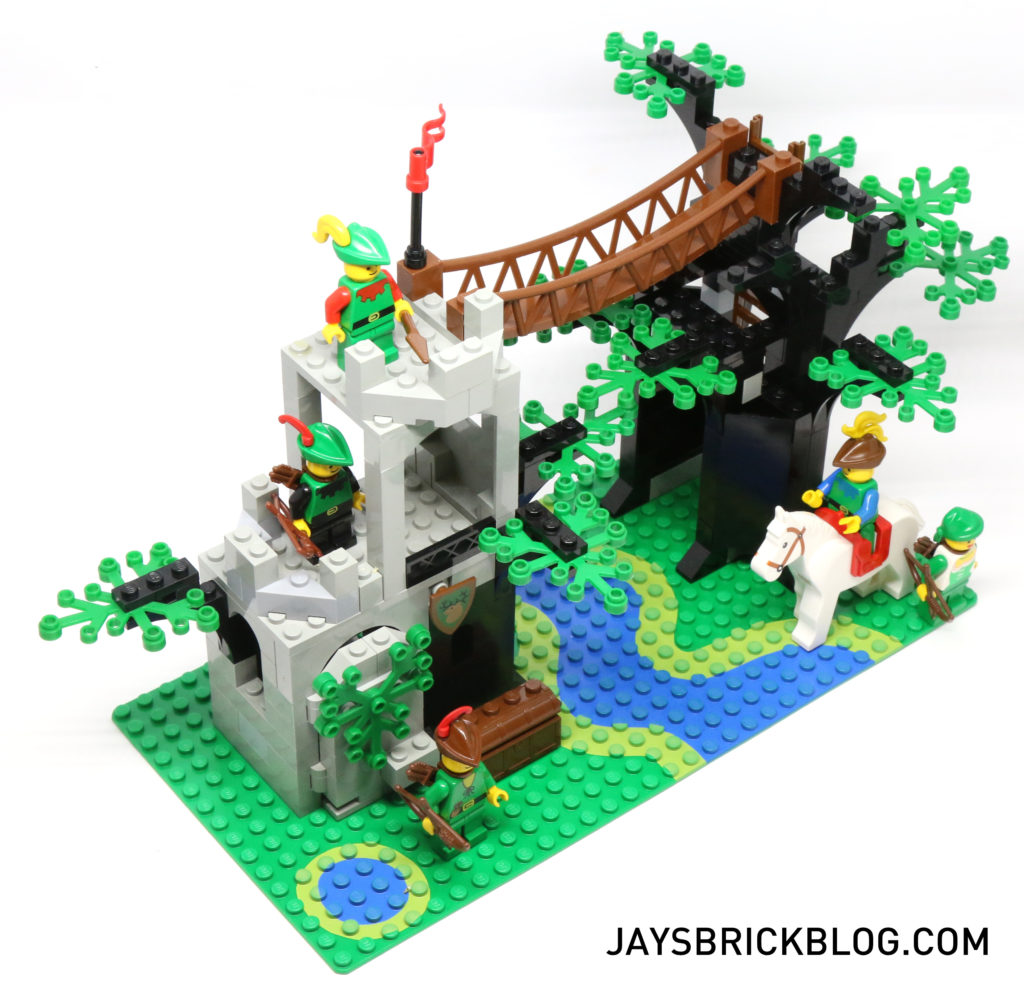 The bright blue and green hues on the baseplate create a very pleasing contrast against the black tree and grey tower. The large black tree on the right is quite decently sized and is also hollow, which allows a Forestmen to hide between the trunk and surprise their enemies. 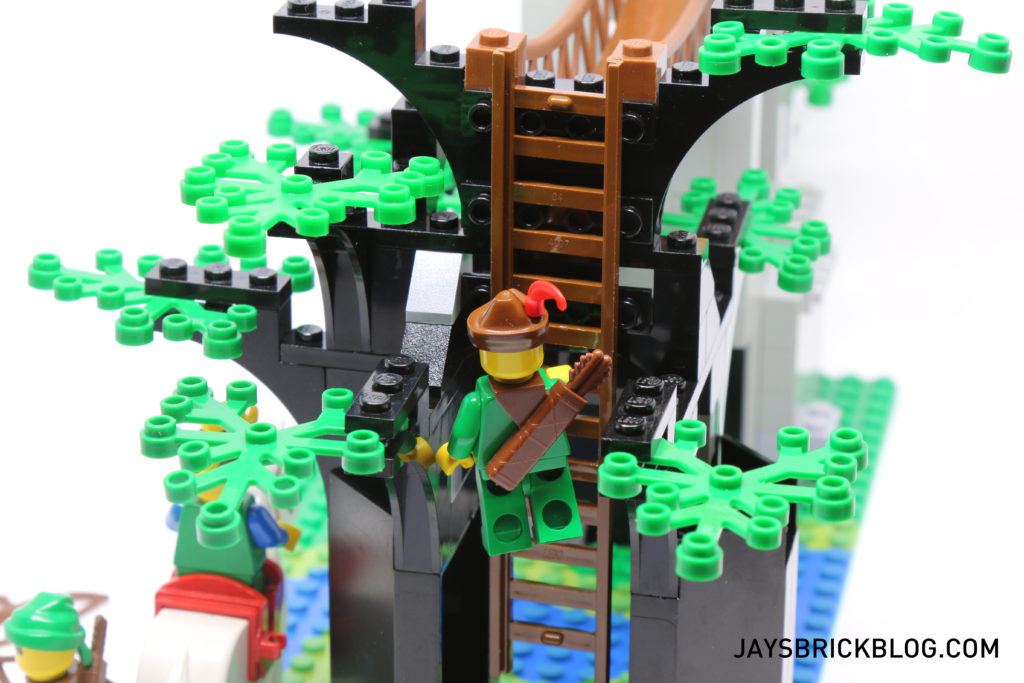 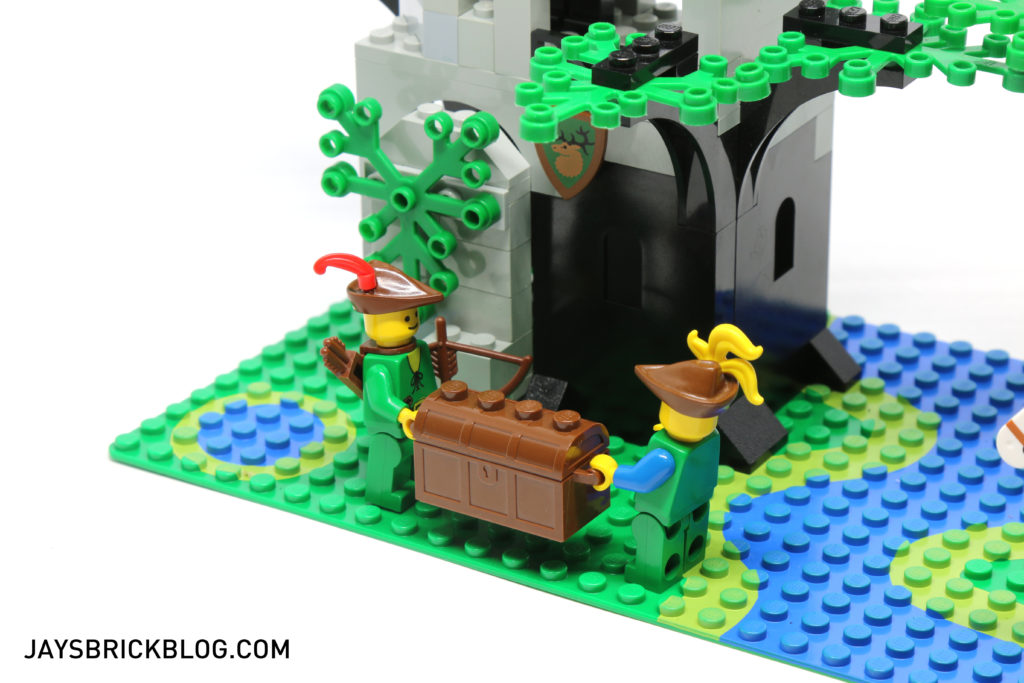 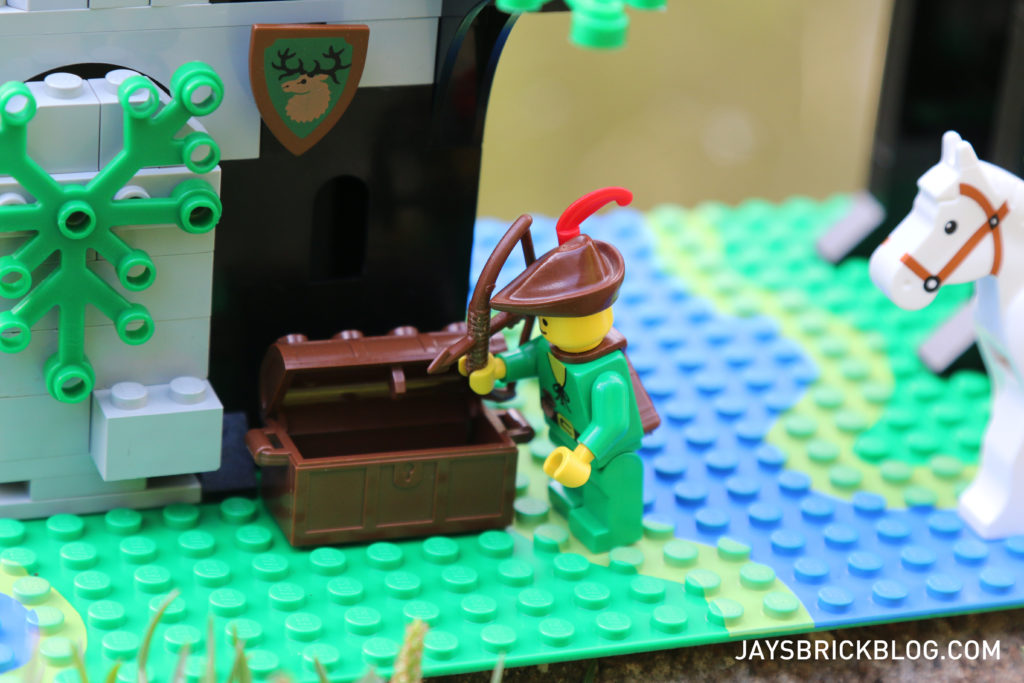 There’s a treasure chest on the tower side of the set, right along the river banks for the Forestmen to store their valuables. They seem pretty confident that no one is going to steal their treasure!

I guess you can leave your treasure lying around – which thief is going to risk three arrows to the face to steal from the bandits of the woods? 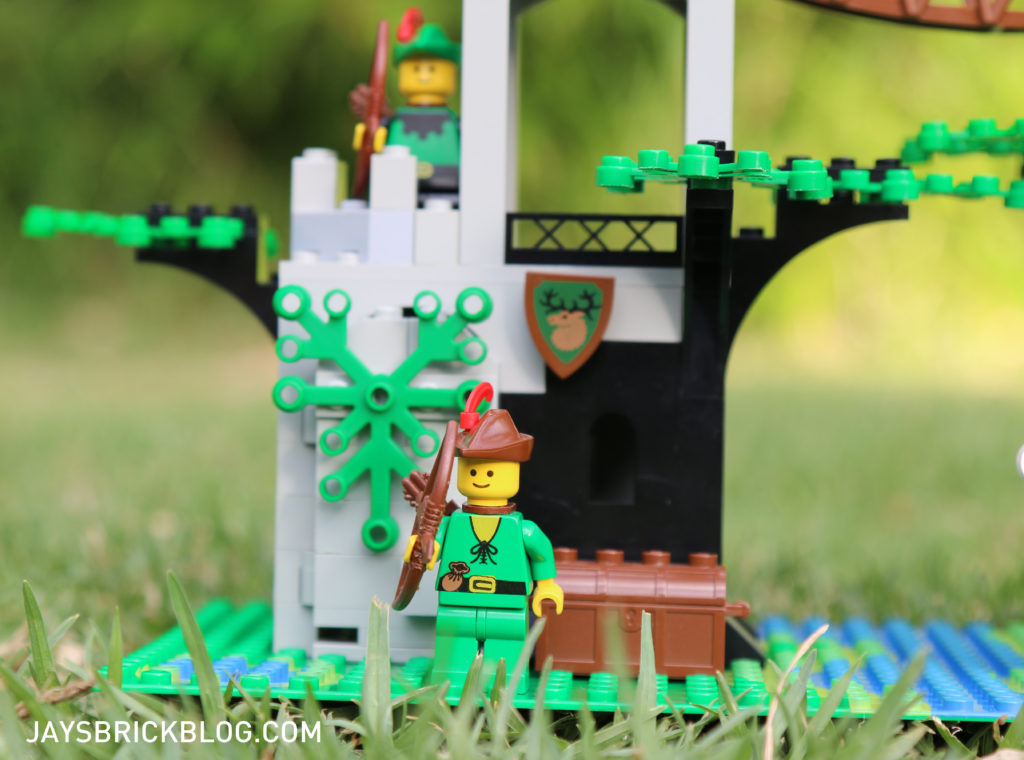 On the exterior of the tower proudly hangs a shield with the Forestmen coat of arms, featuring the iconic Stag motif. 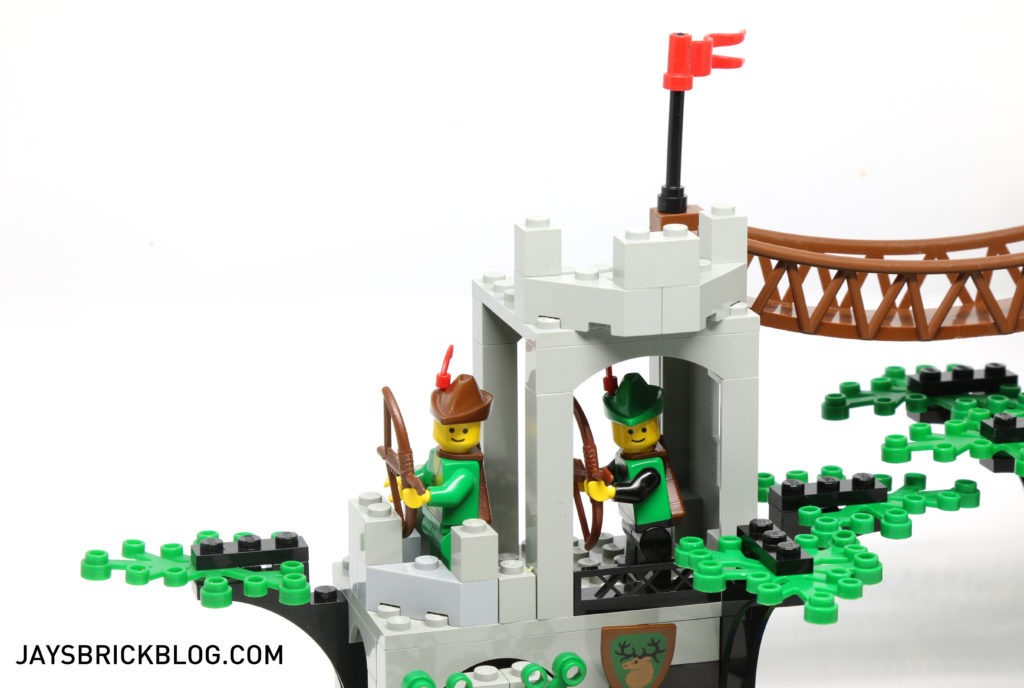 The tower is a really clever bit of design. In typical Forestmen fashion,  the structure is incorporated into a tree, evident by the black branches erupting from the grey walls.

On the second level is an ideal vantage pointfor the cunning Forestmen archers to defend their home from any intruders or detect any enemies from afar. 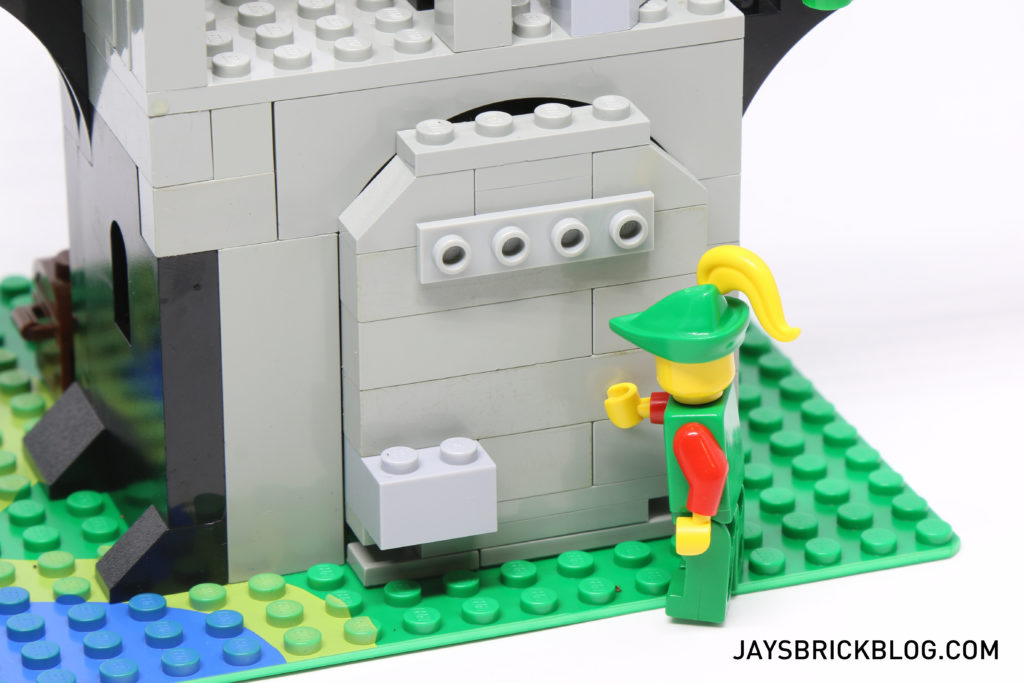 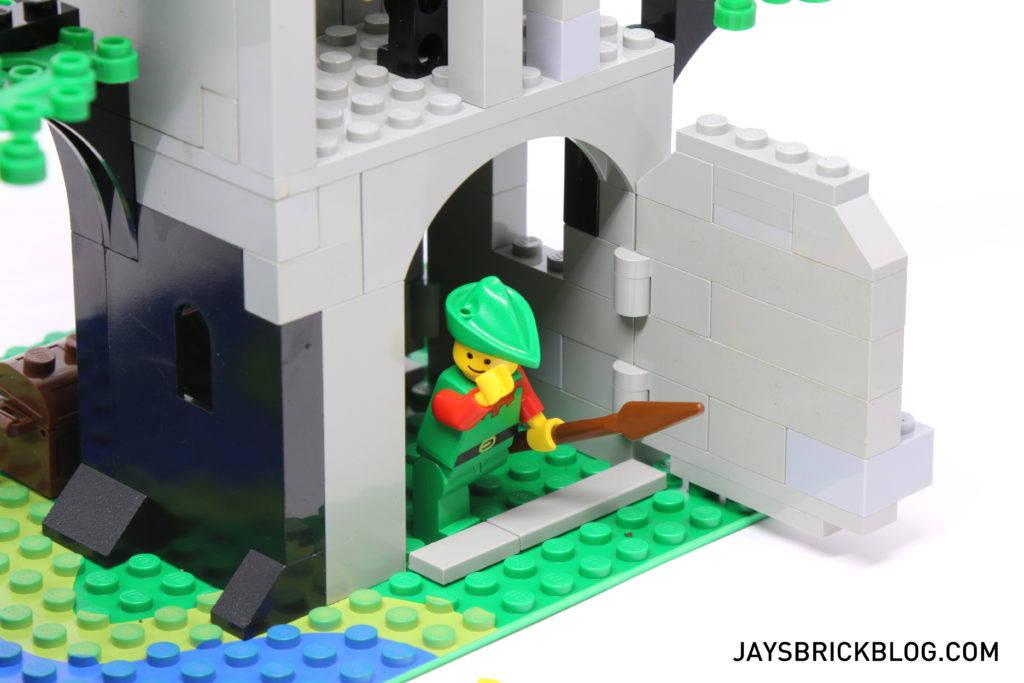 On the ground level is a familiar Forestmen fixture, a hidden door which opens up to reveal a fairly cavernous room/chamber. 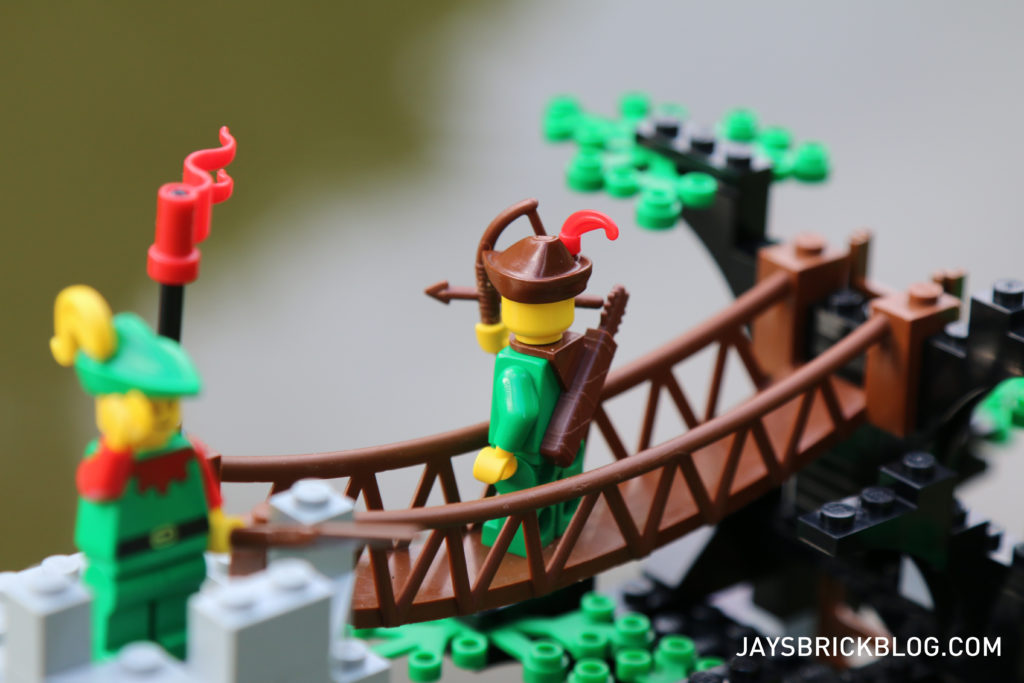 One of my favourite parts of this set is the rope bridge that connects both parts together. It’s rustic and adds a really nice dash of brown to the whole set. 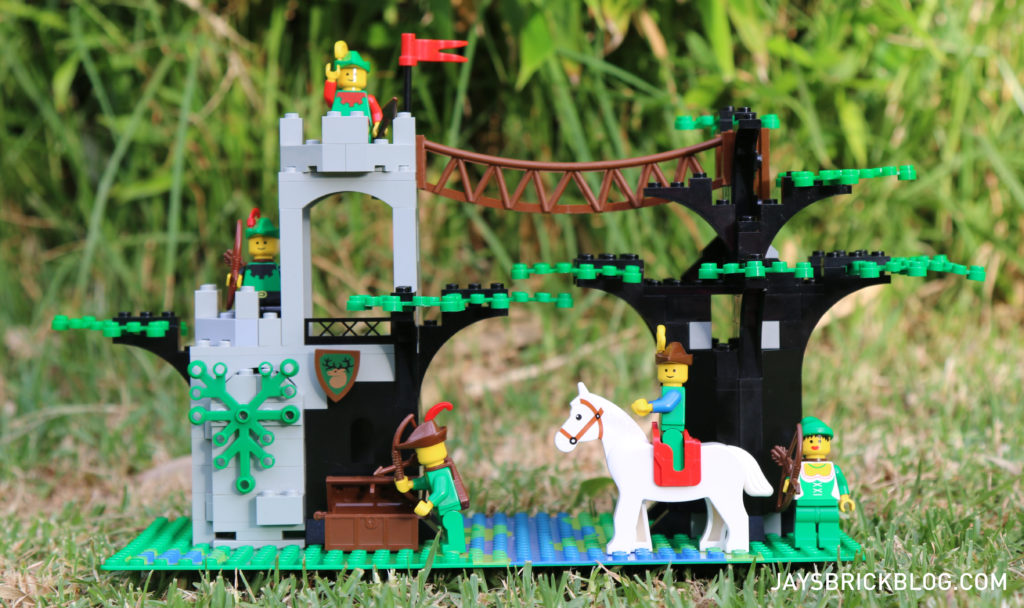 Final thoughts: 27 years on, Forestmen’s Crossing still manages to exude plenty of charm that is sorely missing from modern LEGO sets. I had a really delightful time restoring and putting this set together, and was very glad that I was lucky enough to stumble upon a really well-preserved copy.

This is such a creatively designed set – I really love the two sections connected by the rope bridge. The set is also extremely generous with foliage – rightfully so for a Forestmen set.

It holds up remarkably well and doesn’t look dated at all. Like really well-designed 8-bit video games, good design truly does stand the test of time.

The tower merged into the tree is also such a hallmark of the Forestmen sets, given their propensity to build their fortifications and structures into trees and the natural world.

With 5 minifigures, there are plenty of characters to play around with. The Forestwoman is also a historic and special minifigure which I’m very proud to own. 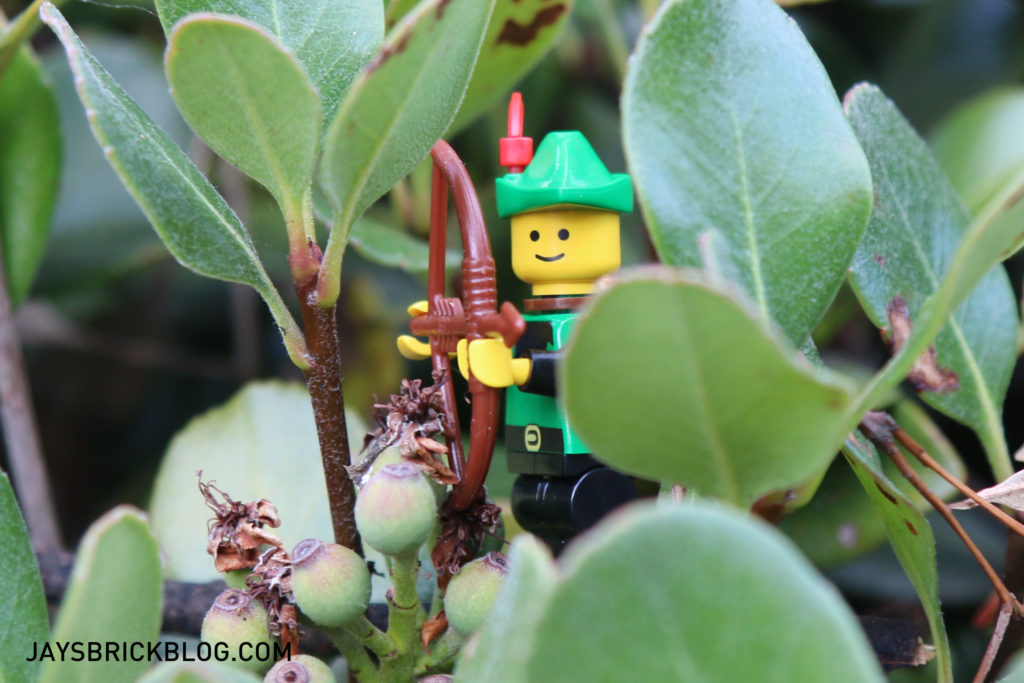 I’m kinda glad that this set doesn’t include any bad guys or villains. Without adversaries, this set represents a very tranquil, conflict-free snapshot of Forestmen life.

In that sense, it’s the perfect set that embodies all the things that make the Forestmen theme so endearing – camouflage, nature and a bunch of men (and woman!) having a merry time.

Thanks for reading! I had a great time photographing and writing about 6071 Forestmen’s Crossing!

I’ll definitely be doing more Retro LEGO Reviews down the road – perhaps I’ll do something Spacey next!

I’d also love to share more of my vintage LEGO collection with you guys, just to give you guys a sense of the kind of stuff I collect – and maybe inspire you to revisit and enjoy LEGO sets from your childhood.

I’d love to know what you think of this series and if you’d like to see more. Let me know in the comments if there are any Vintage LEGO sets that you would like to see featured here, or if you’d like to share your memories of playing with Forestmen sets from your early days as a LEGO fan!