Got this set as it was going for cheap at Isetan a couple of weeks back and when my nephews were over during Chinese New Year, I figured it would be a good set to let them play with. This entire set was put together by my little cousin nephew Jamie (who is 4 I think!) who is quick becoming a Lego enthusiast!

Here’s Jamie playing with one of my sets in my room, so this review is dedicated to him, builder of The Forbidden Forest!

Here’s a picture of the box from Brickset, because I totally forgot to snap a picture of the box! It’s a small set featuring a scene from Harry Potter 7 where Harry goes up against Voldemort and loses. Hagrid was captured and had to carry the lifeless Harry Potter back to Hogwarts Castle. You get four minifigs in this set, and a tree structure which is great at its price. Here’s an introduction to the minifigs. 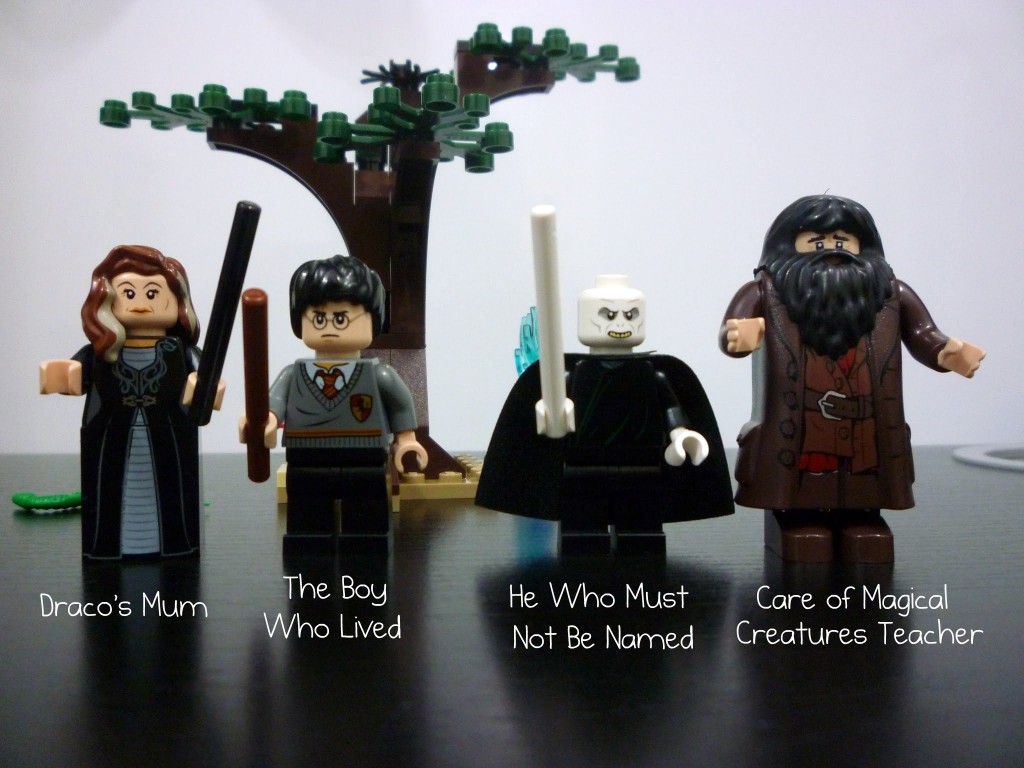 The stars of this set are the minifigures and this set definitely does not disappoint. First up, you get the titular star of the series, Harry Potter in his Hogwarts garb. You get his arch-nemesis, Tom Riddle aka Lord Voldemort aka You-Know-Who who looks pretty evil and menacing here. You get the gentle giant himself, Rubeus Hagrid and Draco Malfoy’s Mum, Narcissa. Great bang for your buck here, as Voldemort only appears in one other set, Hagrid appears in only 2 (one of them if the expensive Diagon Alley set) and Narcissa is unique to this one!

Here’s a closer look at Harry Potter. He’s got a wand (which I don’t like because they’re just too large to be wands! Why couldn’t Lego have created smaller and better shaped wands?) and his torso features the preppy (back-printed!) Hogwarts uniform, complete with Gryffindor coloured tie and badge. He’s got two faces, one a smiley one and a more determined looking one, possibly to face Voldemort. This is my first Harry Potter fig, so I like him, although I know he shows up in almost every set (ala Jack Sparrow). Still a good minifigure to have, even though I’m not a huge fan of the Harry Potter series! 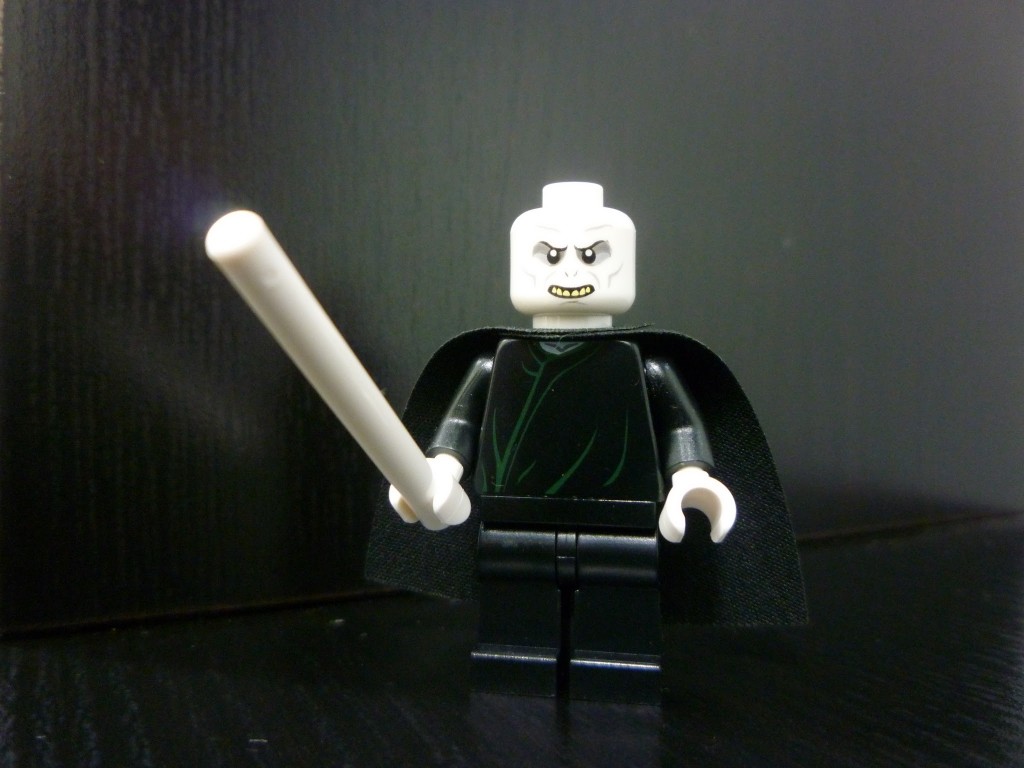 Here we have Lord Voldemort, set against a black background cause his head is white. He only has one mean face but it works well. Capes are always awesome, and he has his white wand. The prints on his torso are in a subtle green that blends into the black, but sadly no back printing. Nice fig to have to go up against Harry, as the only other set you can find him is the more expensive Hogwarts Castle. 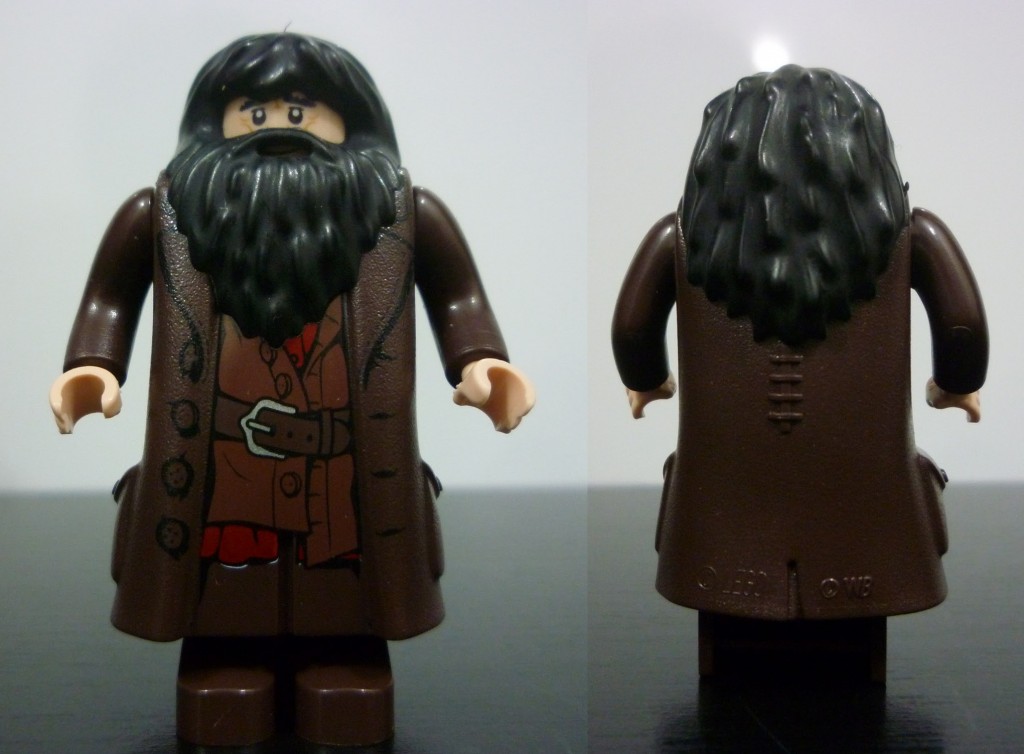 Here’s the oversized Hagrid! He stands a head above normal minifigs, has got an epic beard and great printing on his shirt. His feet don’t move and if you look closely, he has fingers on his hands, one of the only minifigs to have defined fingers! I love how his kind beady little eyes peep out of his beard. I’m very glad to have such a unique minifig in my collection! Alas, he only has a one sided head, but that’s okay! 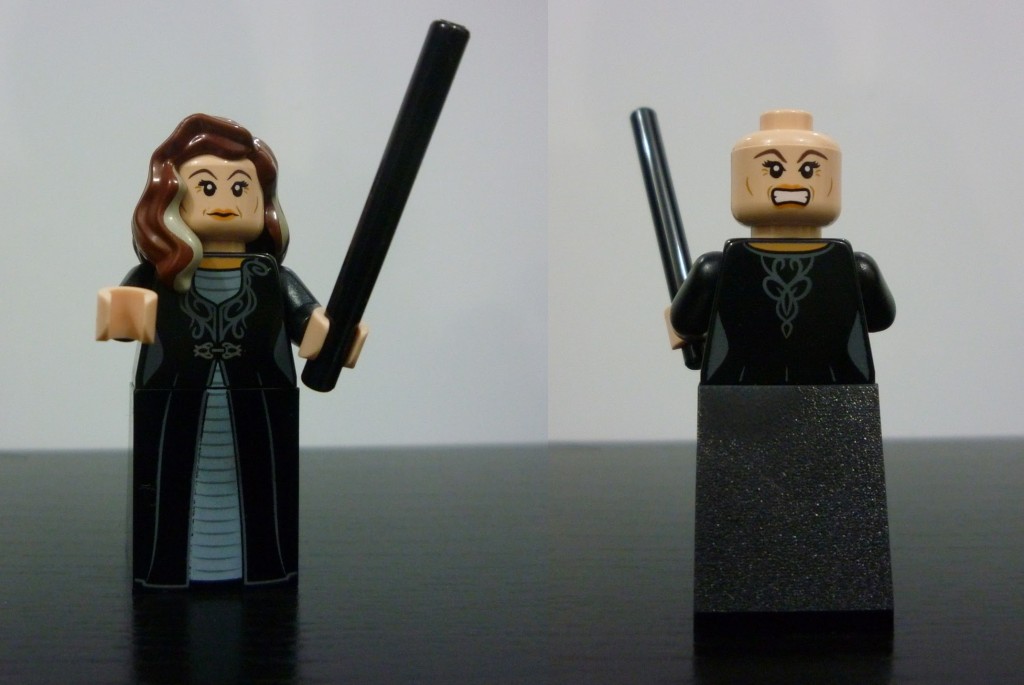 Here we have Narcissa Malfoy, who is unique to this set! She’s a minor character in both the movies and books but I absolutely love her minifig.She’s got great two-toned hair, a two-sided face with one side gritting her teeth in rage(?) and a very very nicely designed torso and skirt-piece. 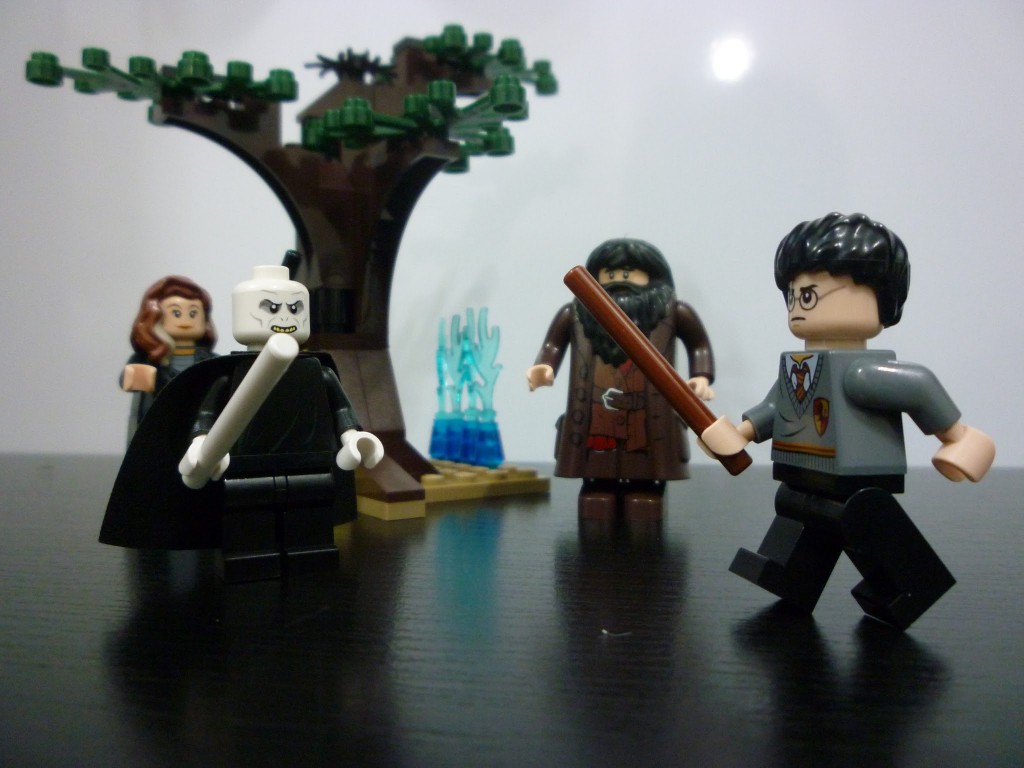 All in all, we get a pretty motley bunch of minifigs, 3 of whom are central to the Harry Potter universe, so to me, this set is a great value for money. The forest structure is nothing unique, although you get quite a fair bit of slopes in dark brown and dark green foliage. 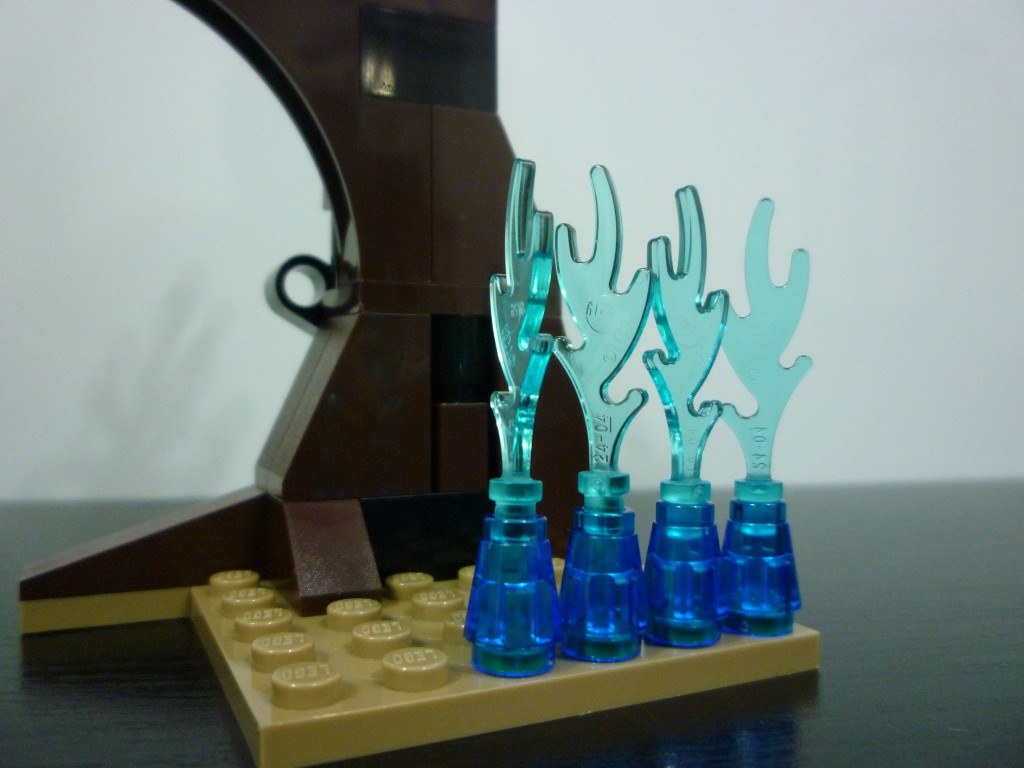 One of my favourite bits of the set? You get four transparent blue flames and cones as well! Woopee! 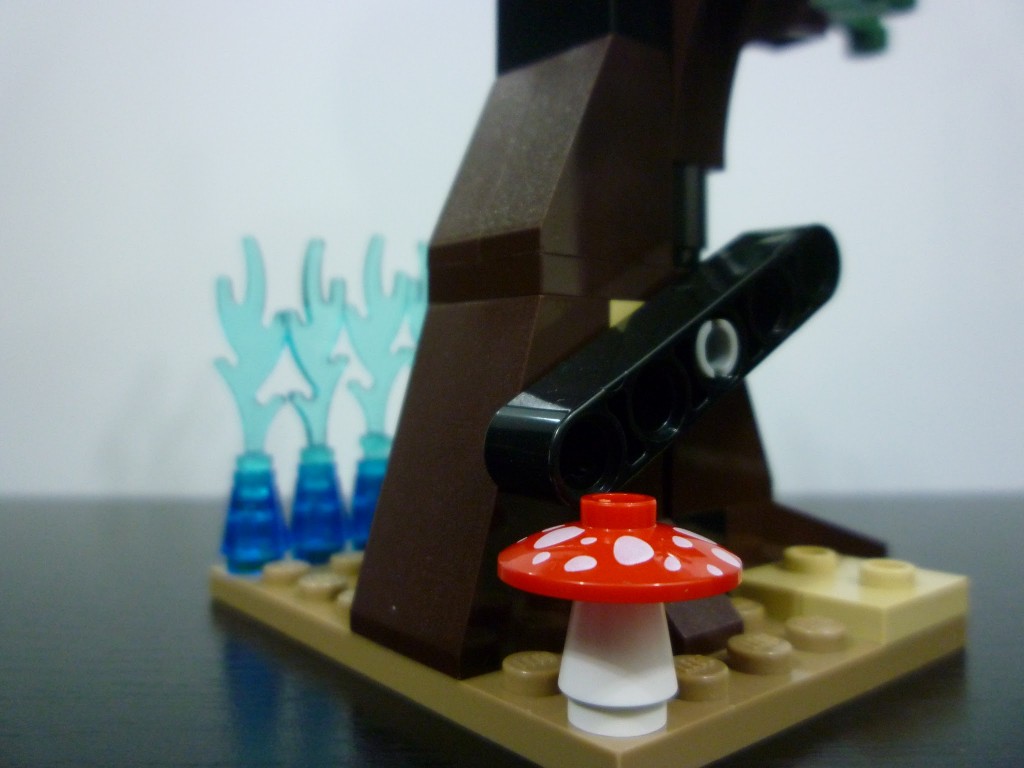 You also get a cool mushroom with the set! Pictured in this is also where the play mechanic comes in. You place a minifig on those two tan studs and you hit down the lever to launch the minifig a couple of inches away. Here’s how it looks like in motion.

Nothing special about it, but it’s a nice touch! 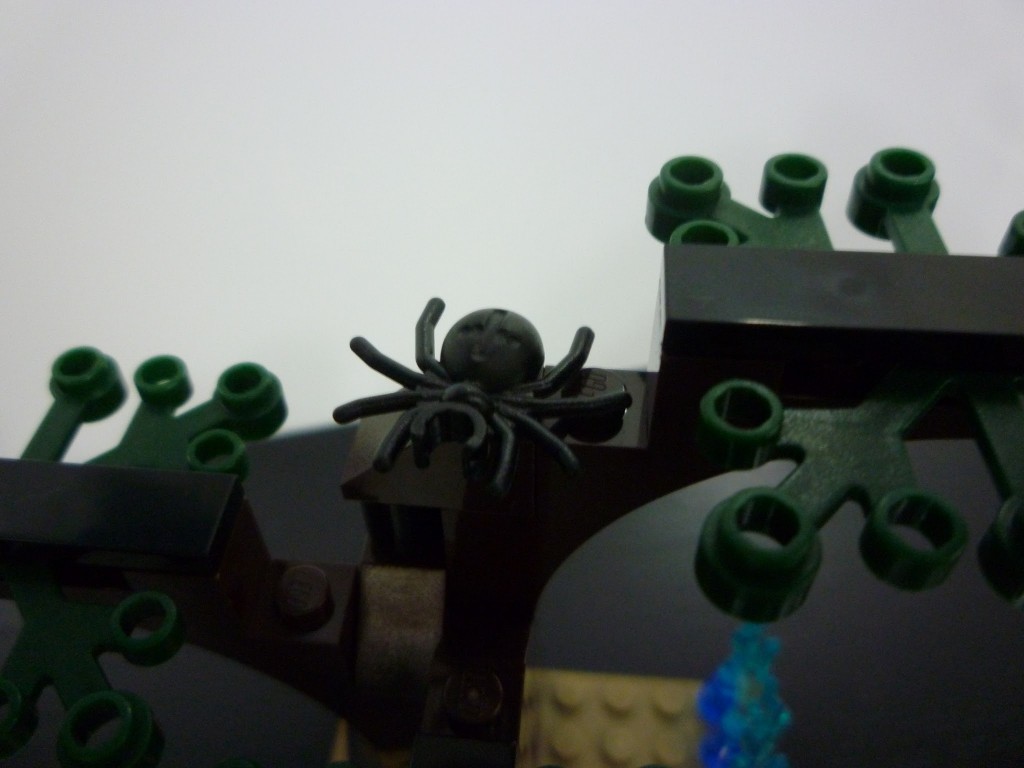 A spider is also included! 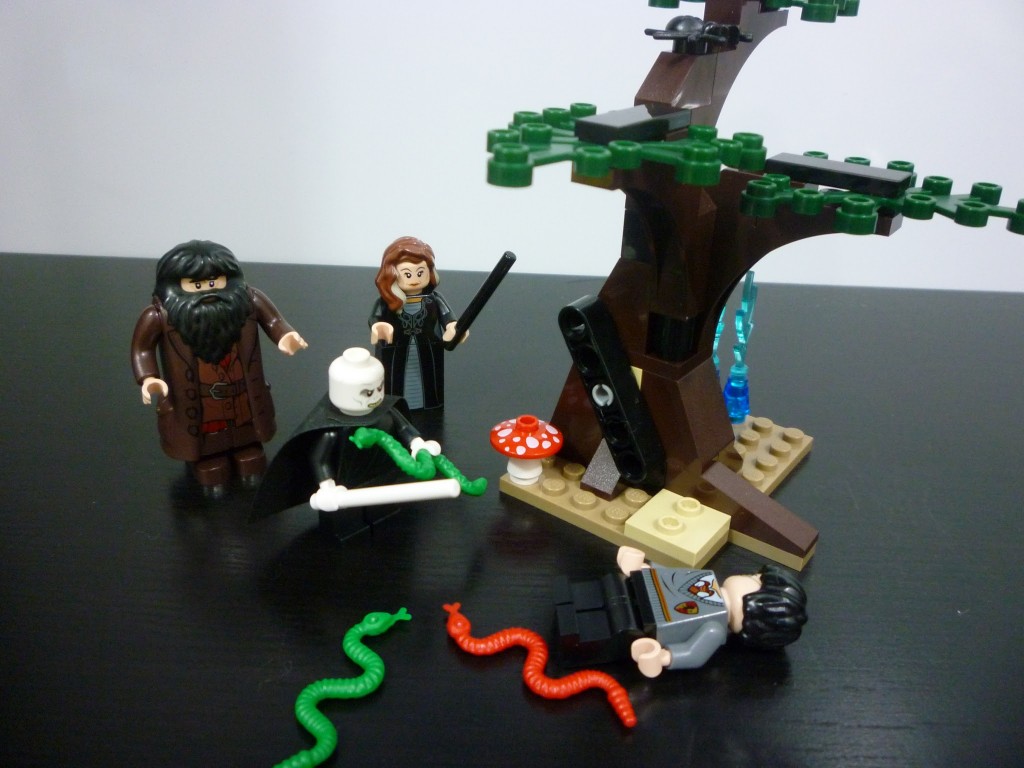 Here’s Harry lying on the ground after being magicked by Voldemort. This set also comes with one green snake who I think is supposed to be Nagini, but I added another 2 for dramatic effect. 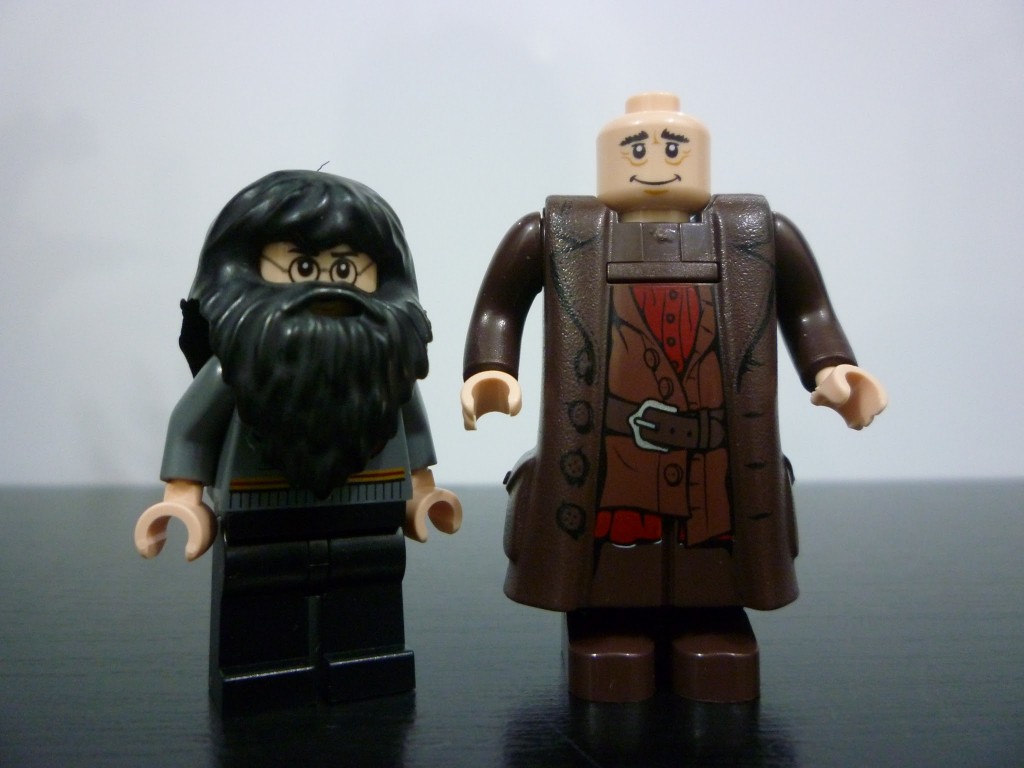 Personally, I love Hagrid’s beard! It looks comically awesome on other minifigs.

Final thoughts
Definitely,a buy unless you absolutely hate the Harry Potter series. You get great value in terms of the minifigs alone, and the little tree structure is nice to have for parts. If you’re only looking to get one Harry Potter set, this would be the perfect one to get.

Ratings:
Playability: 5/10 The flicking action thing is honestly kind of lame, but with 4 minifigs, you can re-enact quite a few great scenes from the books.

Design: 7/10 Honestly, I wouldn’t call a single tree a forest, but it’s done well enough. The  minifigs are designed really well, and on it’s own, it looks pretty good on display.

Price: 9/10 I got this for 55 bucks and it retails at RM65 and for that, you get 4 valuable minifigs, one of which is unique to this set AND Hagrid. Doesn’t feel TOO bad on the wallet.

Minifigures: 9/10 I believe I’ve sung enough praises of the minifigs already. But then again, this set revolves around the minifigs so in that sense, it totally delivers.

Total: 38/50 Overall a nice set, I would’ve liked a little more playability, but seeing the limitations to this set, I can’t complain much. It’s got good value, especially if you’re into collecting licensed Minifigs. This set can be kinda hard to find (I bought mine at Isetan, The Gardens) and I know a lot of Toys R Us stores are out of them, due to the low price of the set.

Signing off with Harry Potter riding a Triceratops, because HECK YEAH, dinosaurs rule! 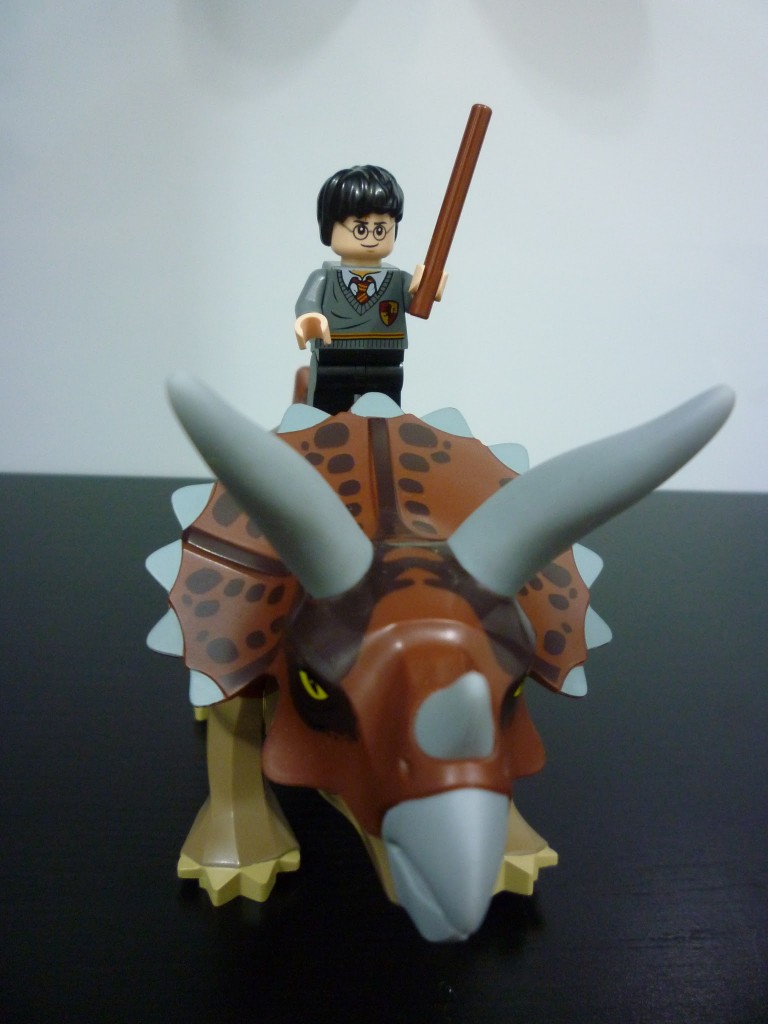