So, it was a very good day today! In addition to my Secret Santa Loot, my incredibly rad employers, Text 100 saw fit to gift me with some Toys ‘R’ Us vouchers, because of my good behaviour or something. Me, Joel, Ben and later Sze Gion decided to head to Bangsar to check out the Lego exhibition there (finally) and I noticed that they had Prince of Persia’s The Ostrich Race super reduced at RM55. Since I had vouchers, I figured, “Eh, why not?” and with Sze Gion’s egging, I went for it, since it you know.. has ostriches and stuff. 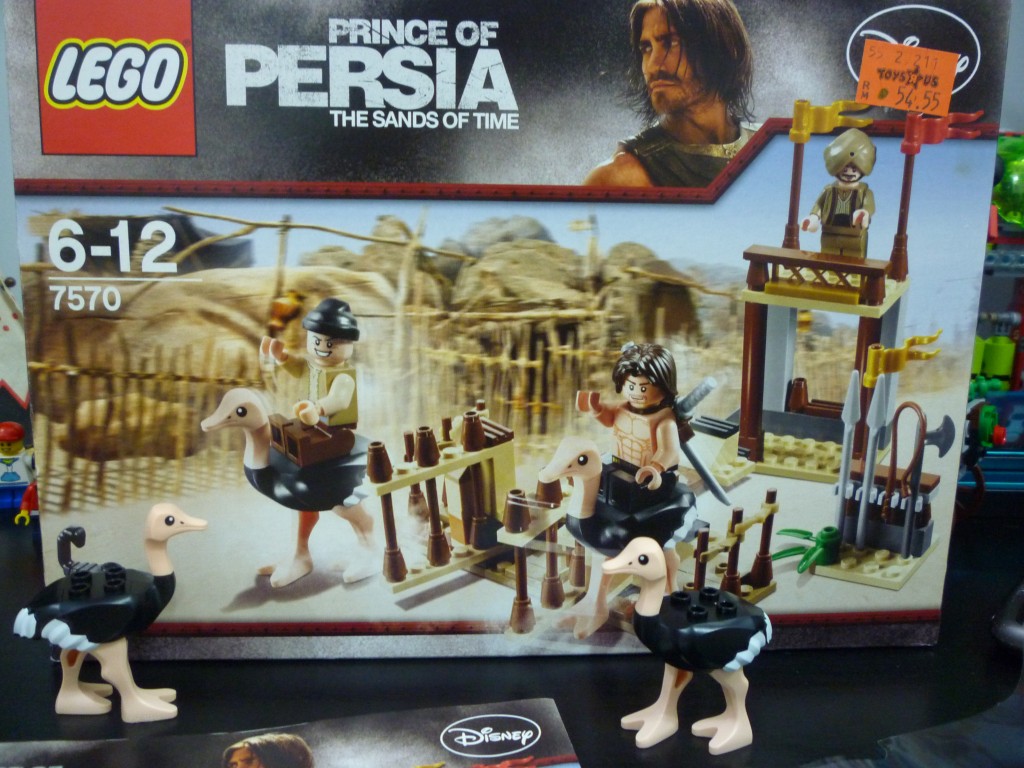 Here’s a snapshot of the box and the two Ostriches that got loose. I’m not a Prince of Persia fan… so I’m not going to get into details with the character names and what not. Going to treat this build as if it were any other Lego set. 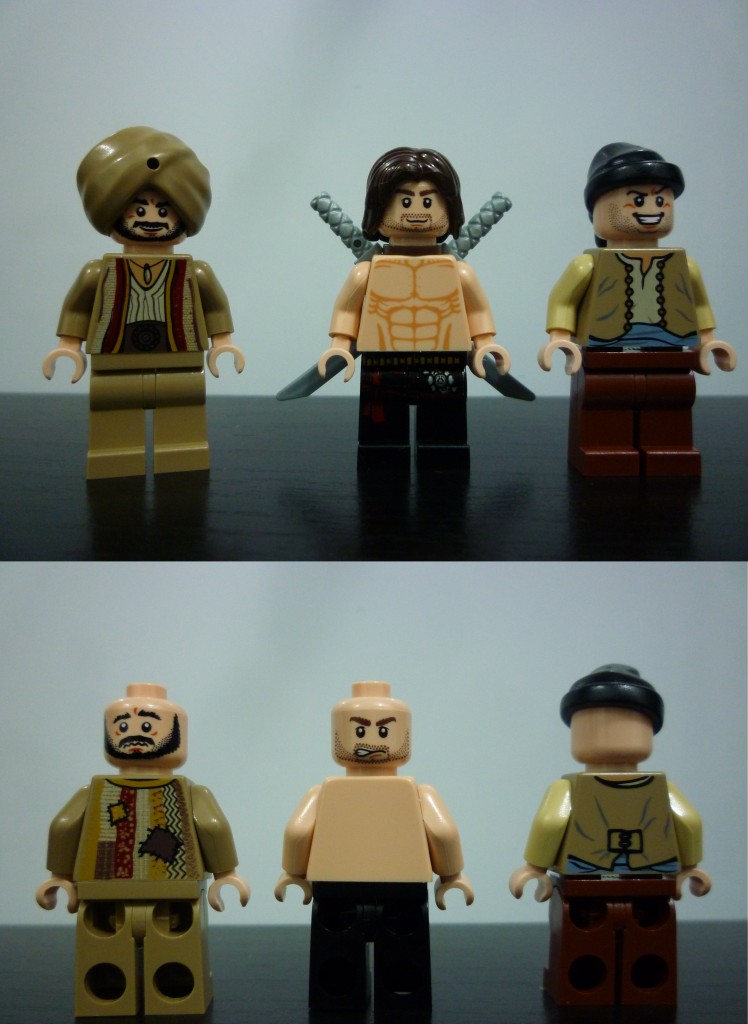 Here we have Jake Gyllenhaal as Dastan, the shirtless himself. As you can see, we get a pretty neat topless male torso which is conveniently missing Jake’s fur that was very evident in the movie. On the right we have turban guy and on the left, we have random henchman #1. Turban guy and Dastan have reversible heads, Turban guy looks distressed in one and Dastan looks a little constipated in his. Poor henchman #1 only has one facial expression. 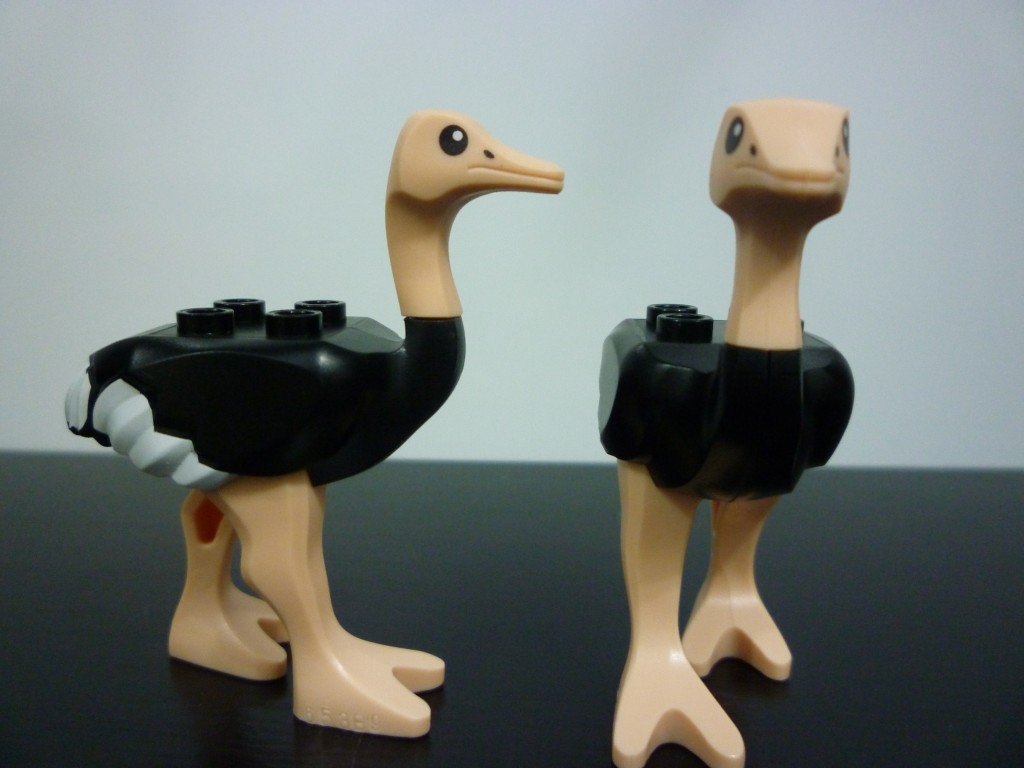 And here are the stars of the set, the ostriches themselves! Their entire body and legs are made of regular Lego plastic, but their heads are rubbery. They look really neat and I remember a few years ago when they were first revealed, it got everyone excited! I like the fact that there are 2×2 studs on their backs, which obviously begs for them to be fitted with lasers or rocket launchers.

On to the main build! 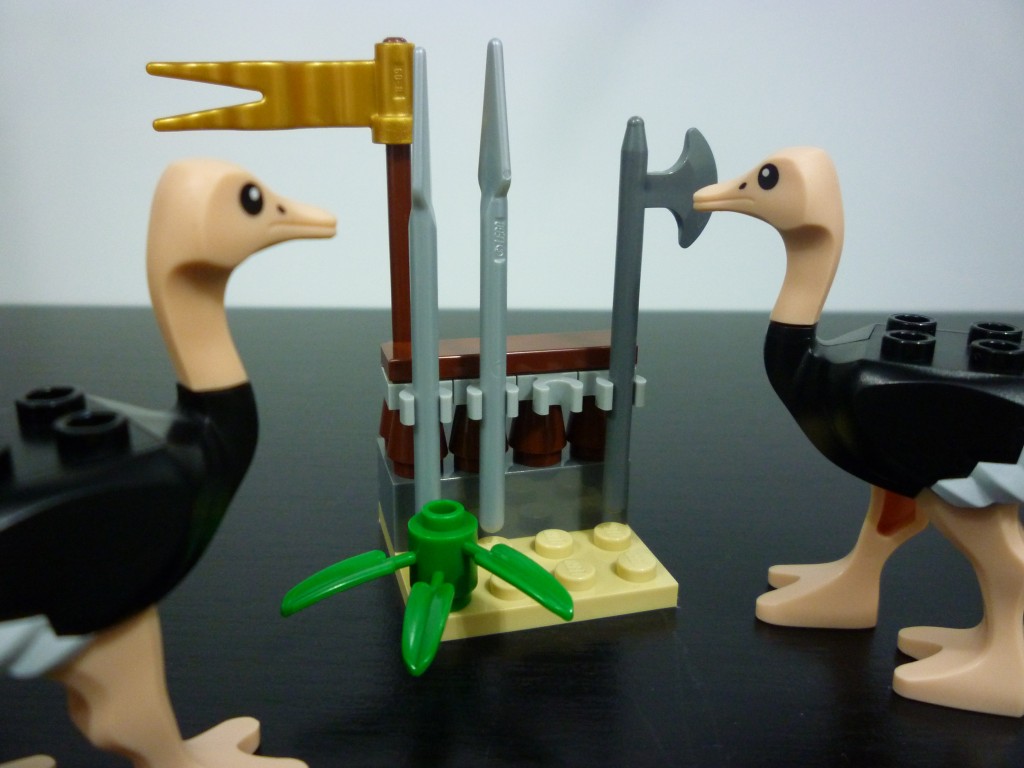 Here we have a decently sized weapon rack that the ostriches are checking out. We get two nice silvery spears and an axe as well as some nice shrubery. 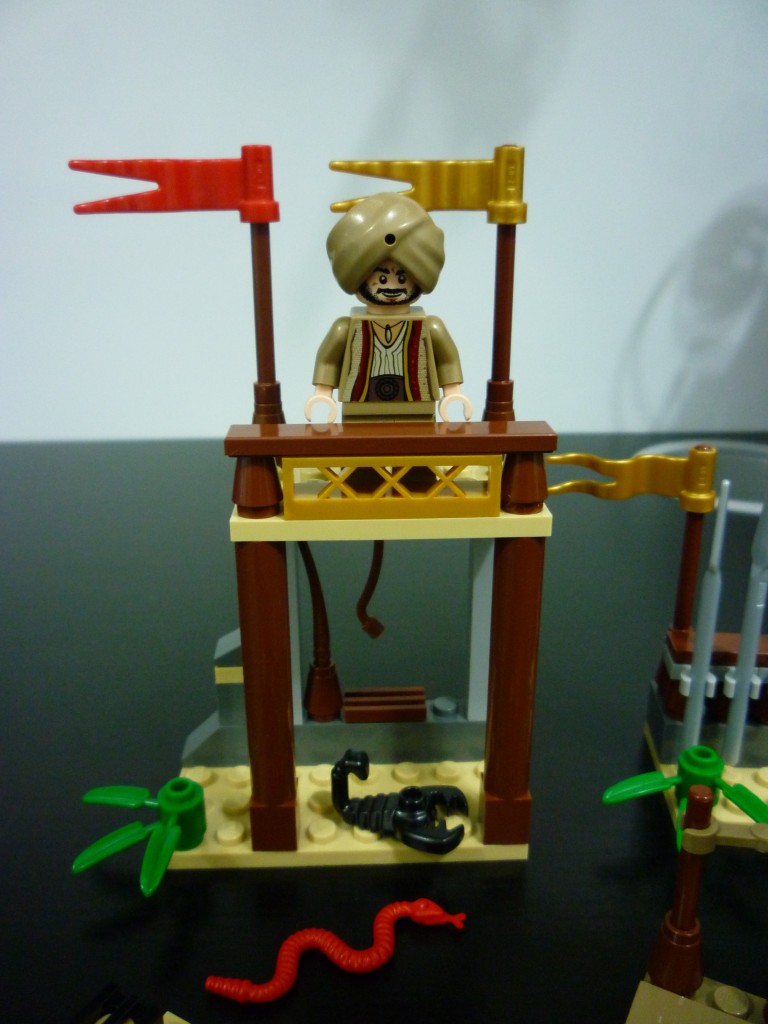 Another simple structure. A perch for Turban guy(man, I really love his Turban) to watch the ostrich races. There’s no way to get down from the roof… and it’s pretty obvious why no one would want to get down to the ground. We have a scorpion and a poisonous (I’m assuming red means DANGER!) snake lurking below. 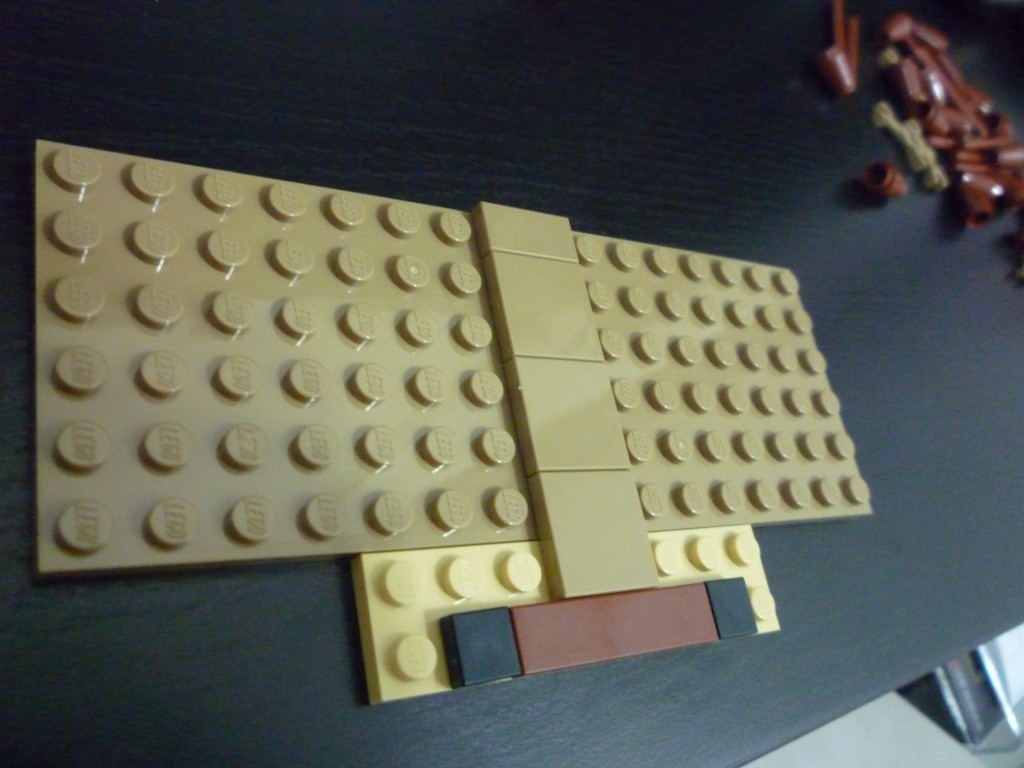 Here we have the base of the main set piece. Look at all that dark tan! 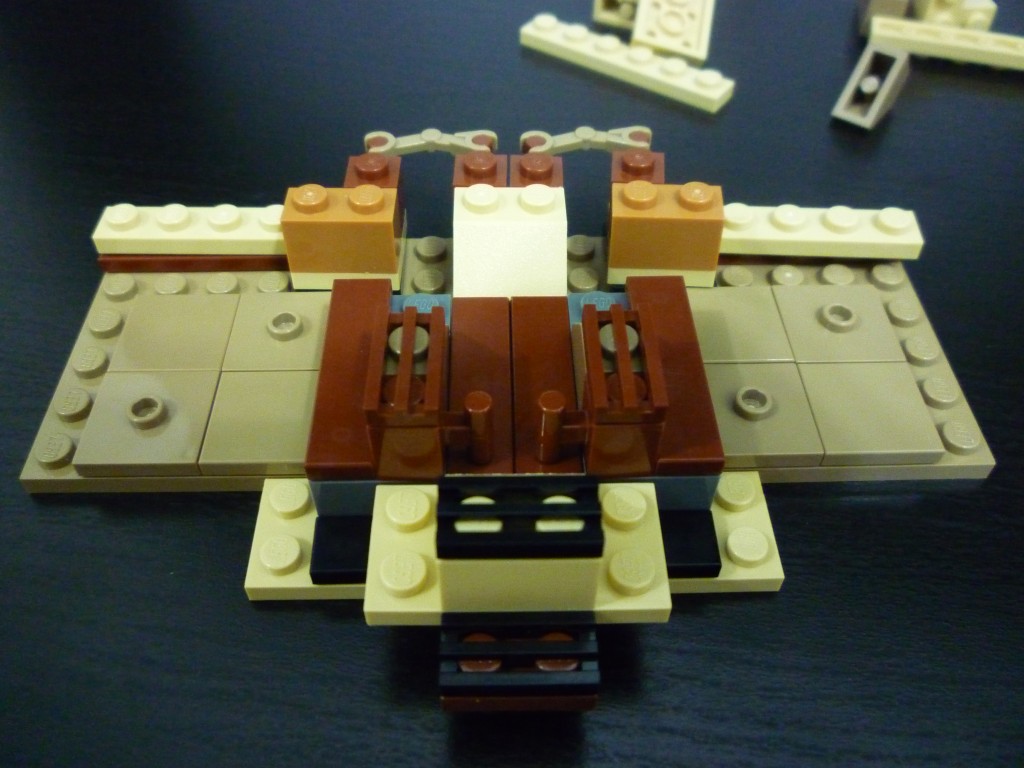 Here we see the base beginning to take shape as well as the mechanism to open and close the gates for the ostriches to run free. Accomplished by smooth tiles and the use of droid hands with those spinny black tiles. 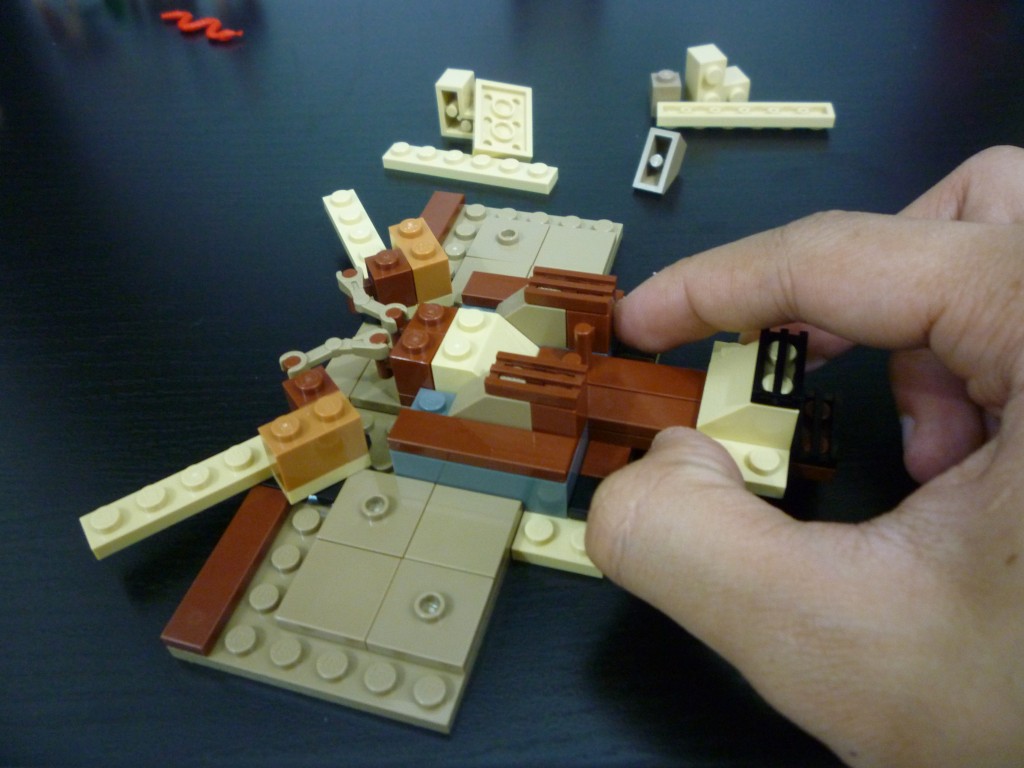 Here’s a look at how it works. Simple, easy enough for children to understand and most importantly, it gets the job done! 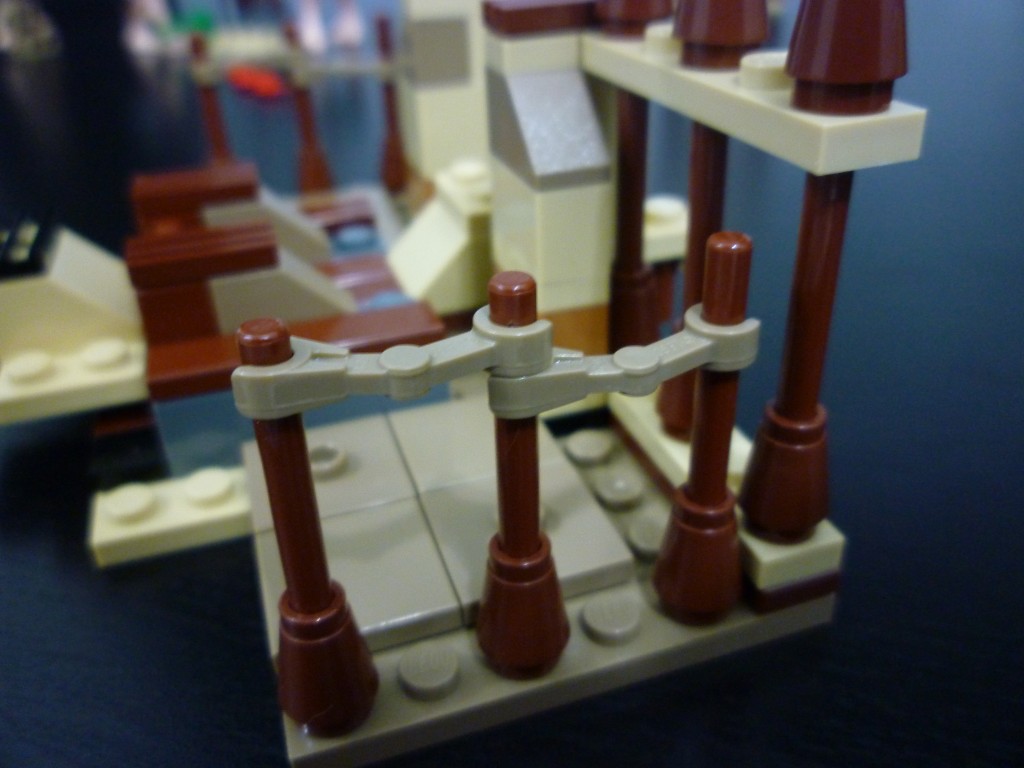 Here we add the fencing which is held together by ‘droid hands’ in tan. According to Sze Gion, these are pretty rare. I didn’t quite like this part of the build.. it got really repetitive. 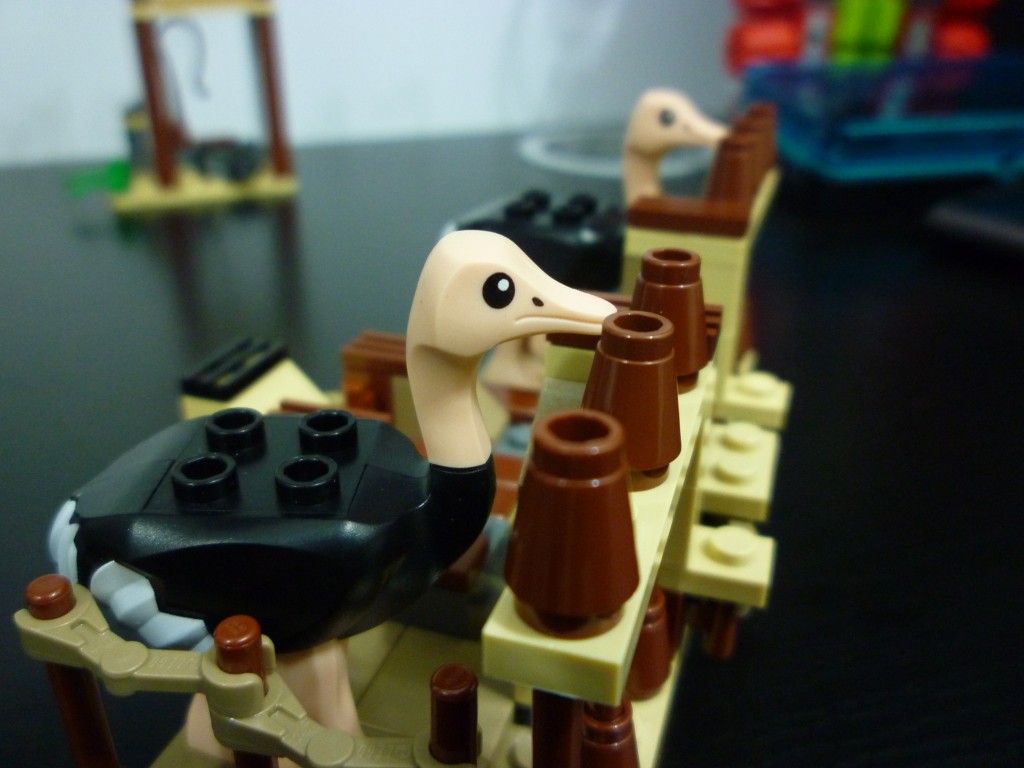 The ostrich pen is finally done! Here we see the two birds raring to be unleashed! 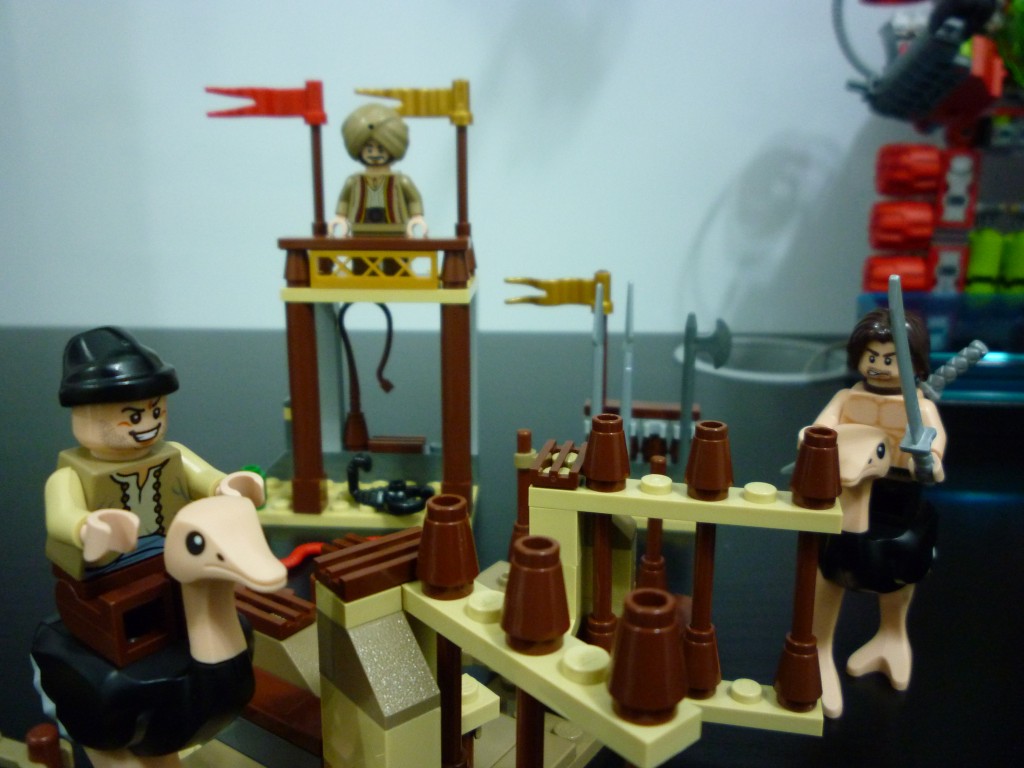 And here we have the end product! All in all, it was a pretty simple build, although it got extremely dull and repetitive at times. I’m not sure if it’s because the colour scheme is drab as hell or if there were too many brown fences to build.

But for RM55, I can’t really complain. You get a decent selection of minifigs, Dastan especially stands out with his ripped chest and dual sword sling. You get Turban Guy (the Turban definitely steals the show as best accessory here) and you also get a couple of nice dark tan pieces. Those are always nice to have. Oh and ostriches too!

Final thoughts
Would I recommend buying it? Not really. Even though it was RM55, I have this sudden urge to pack it up straight away. The things that have always irked me about the Prince of Persia sets were that they were simply too drab and visually unappealing. They lack the bright burst of solid colours Lego are traditionally known for.

Ratings:
Playability: 7/10 You get a nice gate opening action, and there’s also a decent cache of weapons in case Dastan gets bored of his swords. Ostriches are a nice touch too, they are surprisingly fun to race.
Design: 5/10 The colour scheme is just horrible. Yes, I know they’re supposed to be in a desert… but really. The brown just hurts my eyes. My favourite set piece is still the observation tower Turban guy is on. It’s the most balanced piece out of the 3.
Price: 8/10 It’s RM55 from Toys ‘R’ Us! Can’t complain there for the amount of stuff you get!
Minifigures: 7/10 Dastan’s nekkid torso is a plus, turban guy’s turban is a plus. And the two sword sling is always nice to have.
Parts: 6/10 You get a few dark tan pieces here and there, including some useful tiles, but other than that, it’s nothing you can’t get anywhere else.

Total: 33/50 I was very bored. I wouldn’t buy this unless I was really desperate or in need of ostriches and Prince of Persia minifigs.