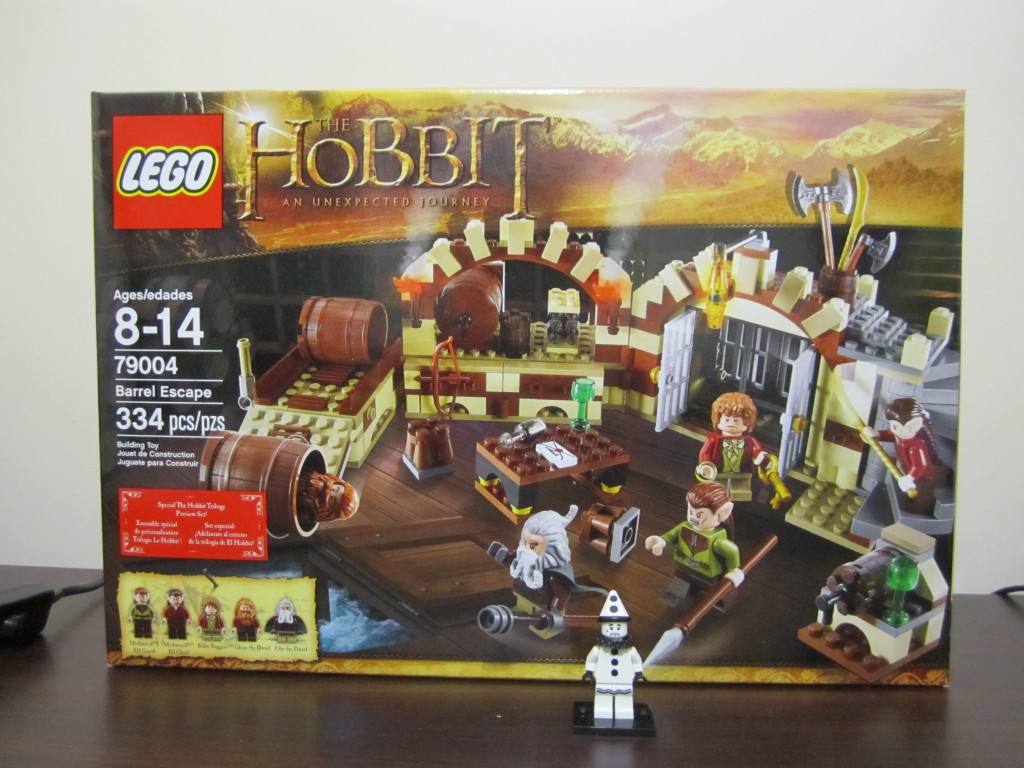 After months of putting this off, I’ve finally built the Barrel Escape! I received this for Christmas from a redditor in last year’s Reddit Secret Santa which I’ve written a little about here.  I guess a little inspiration to build this set came from the trailer to Part 2 of Peter Jackson’s The Hobbit trilogy that was released about a week ago. Feast your eyes on the trailer below and try to spot the part where the dwarves are tumbling around a river in barrels!

The Barrel Escape set is a special preview set for the Desolation of Smaug, which comes out in theaters in the US on the December 13 2013. 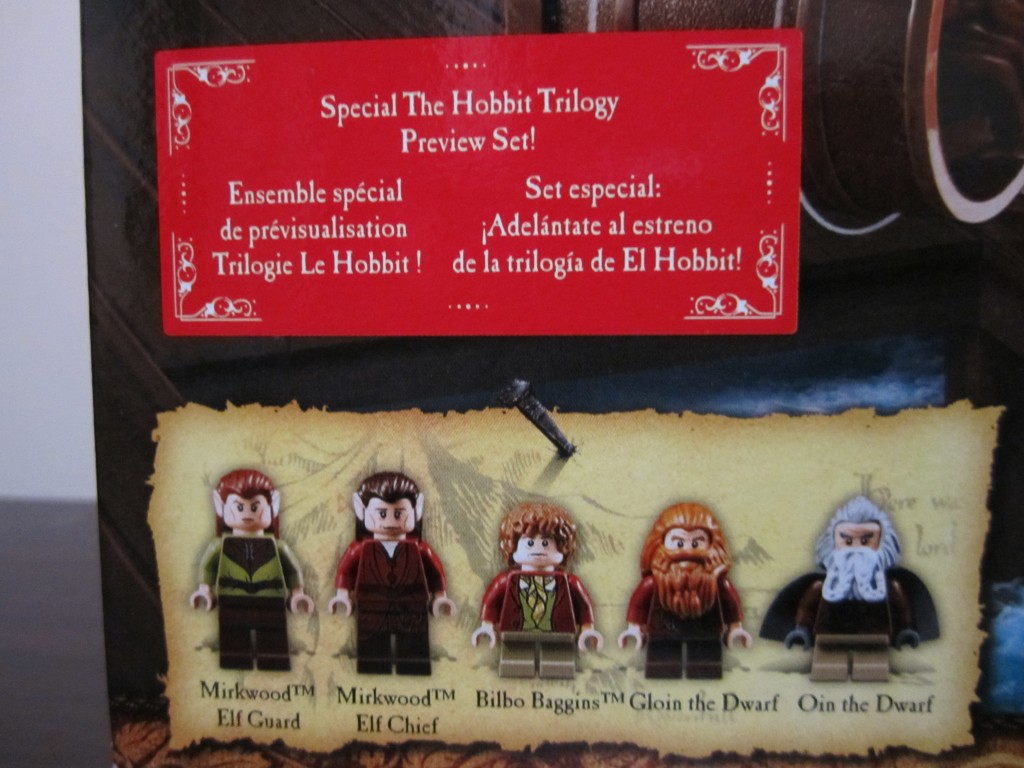 The Barrel Escape is one of the rarer The Hobbit sets being a Toys ‘R’ Us exclusive and is based on one of the most hilarious and entertaining parts of the novel, a chapter called Barrels out of bond, where Bilbo bundles Thorin’s company into a bunch of barrels to save them from the clutches of the Elf King, Thranduil. It’s one of the most endearing parts of the book, and I’m pretty excited to see it brought to life in the movie. 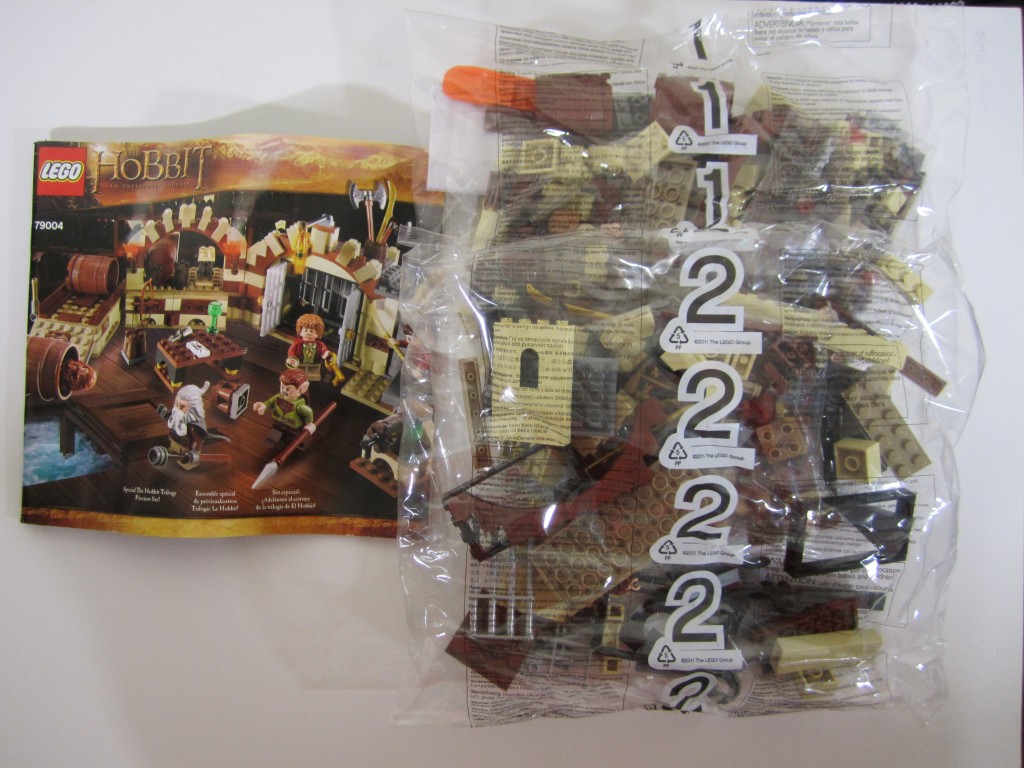 The set is pretty small and the parts come in two polybags, conveniently numbered for your building pleasure. 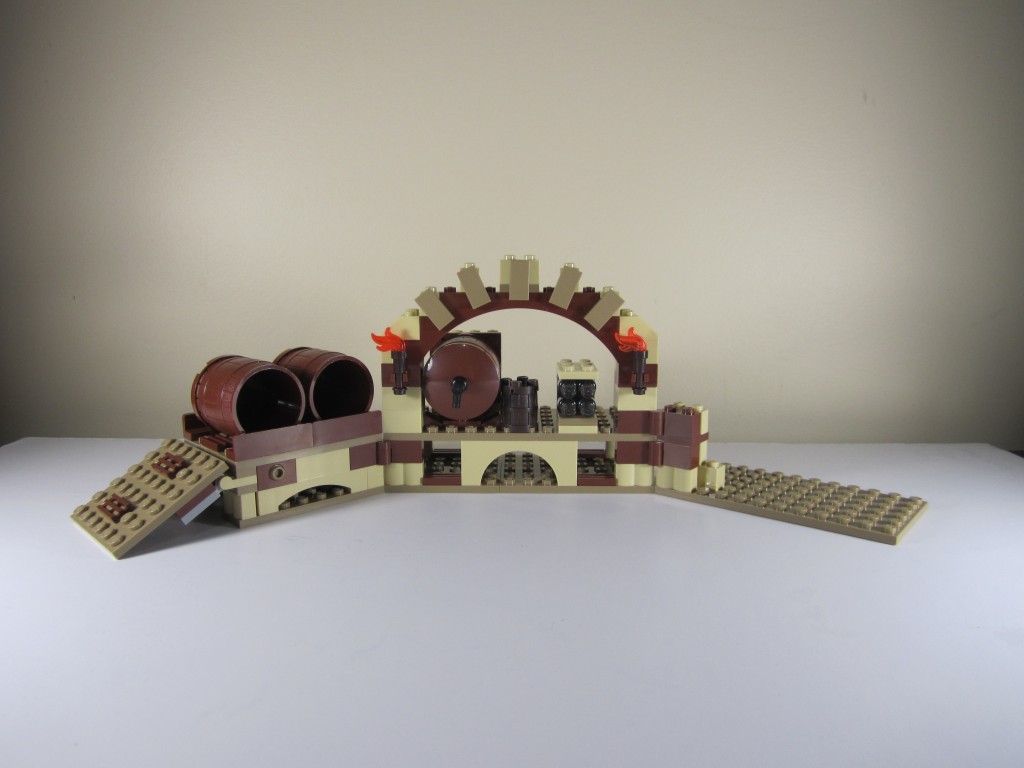 Here’s what the first bag gets you. 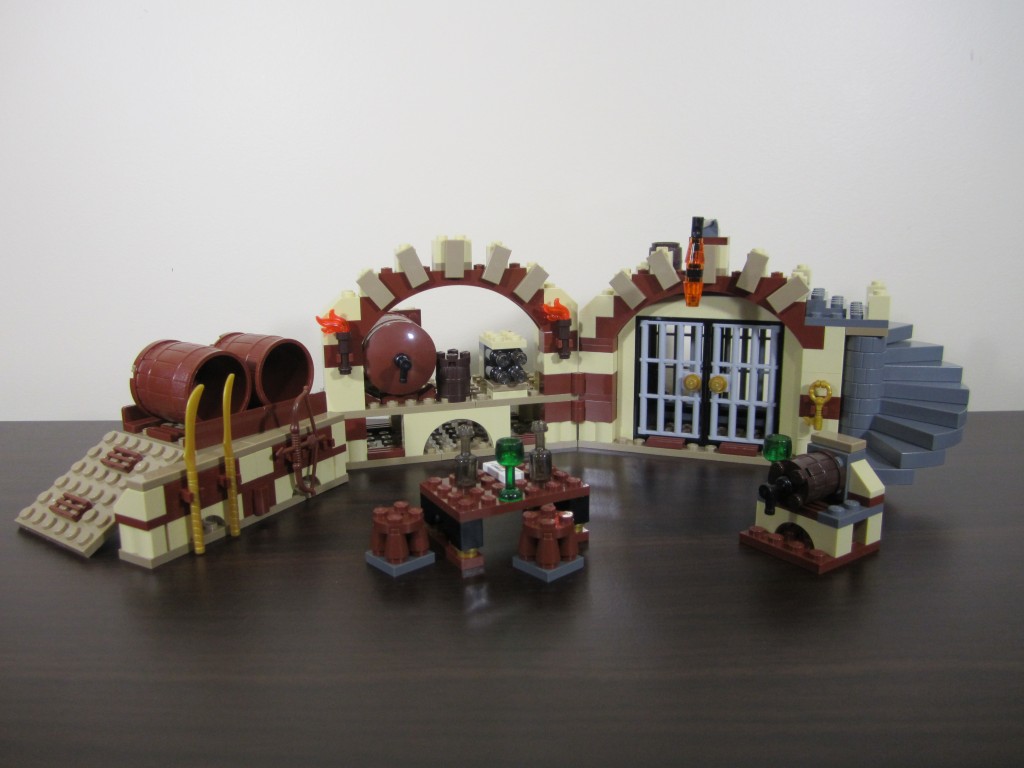 And here’s what it looks like when you put together the second bag of parts. Barrel Escape features the aforementioned barrels on the right, a dungeon, and Thranduil’s stash of wine. In the books, Bilbo famously rescues the dwarves who have been captured by Thranduil thanks to his trusty ring which grants him invisibility. But first up, let’s get into the minifigs in this set. 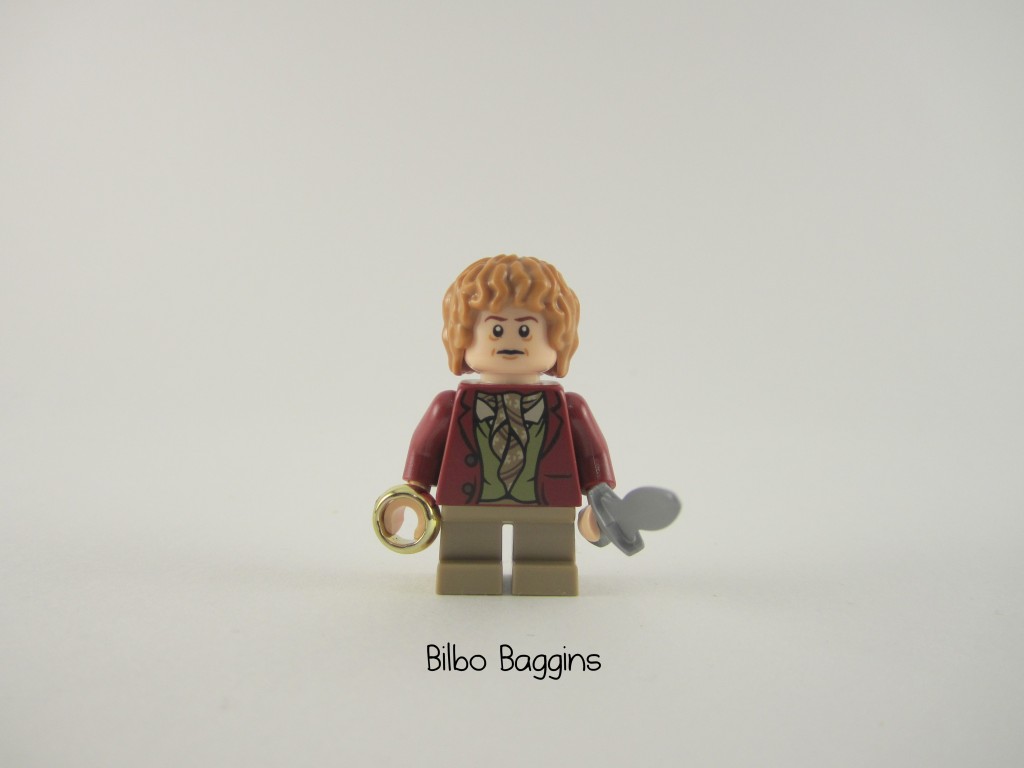 Here’s the protagonist, Bilbo Baggins. He sports the same outfit as the Bilbo you get from the smaller Riddles of the Ring set and is of course carrying his trusty Elven blade, Sting and the One Ring. Lego did a pretty good job replicating Bilbo’s features on to his minifig, and his dark red jacket coupled with his orangey hair makes this whole package come together very well. 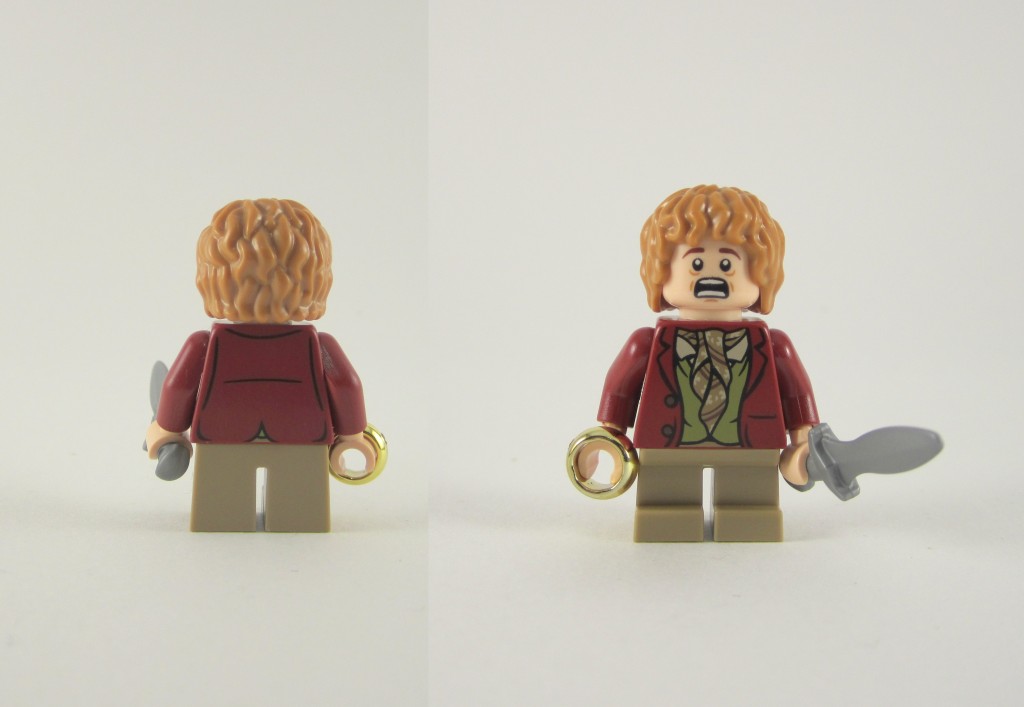 As with most licensed sets, Bilbo has a dual-sided head, with the reverse side sporting a look oh shock/surprise which nicely contrasts his pensive normal look. Some neat back printing details tie everything together nicely. 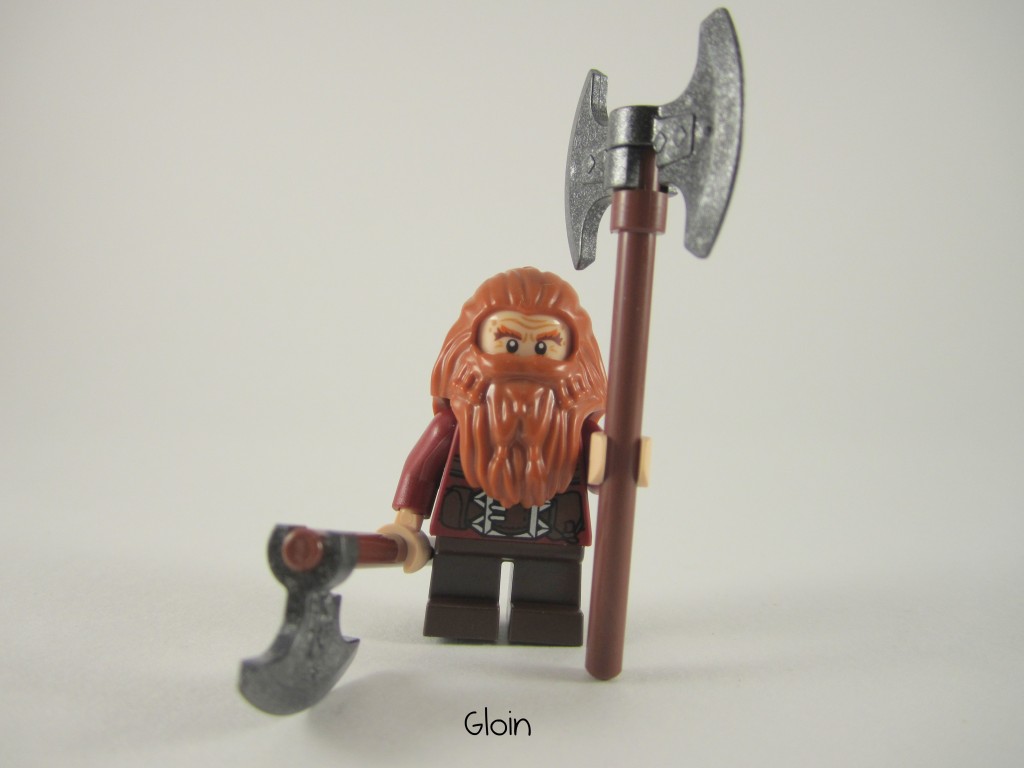 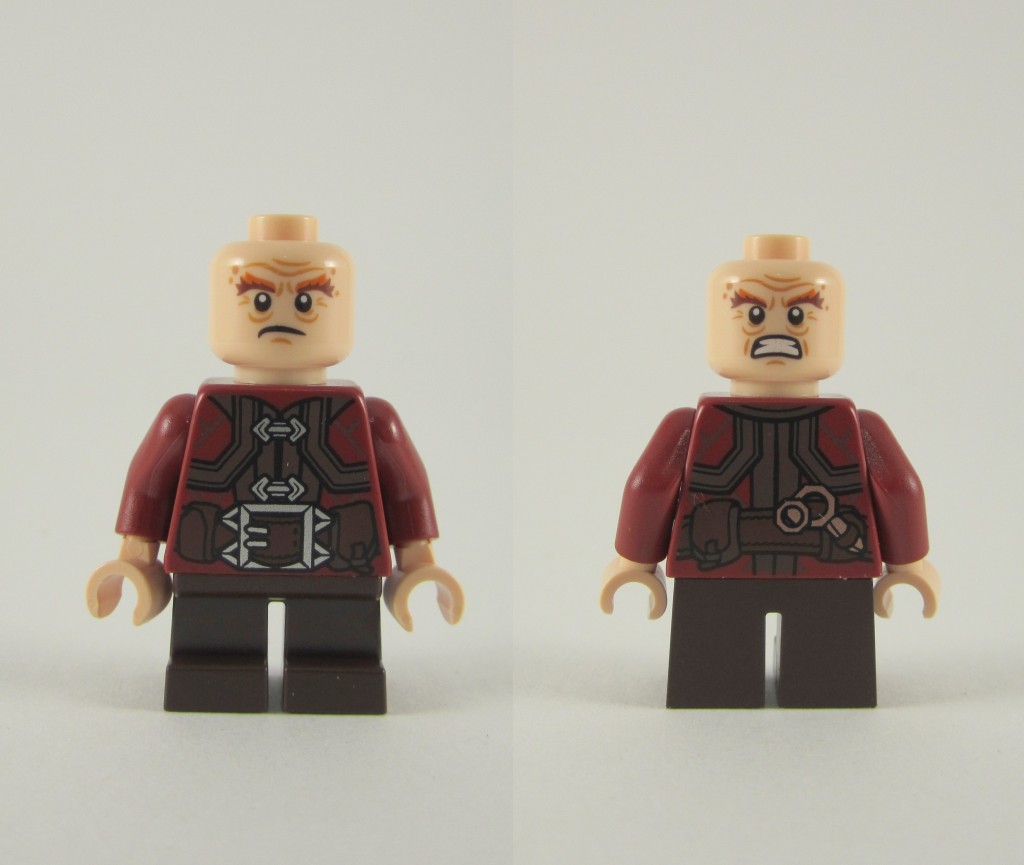 It’s a pity that his magnificent beard covers up much of the details of his chestpiece, because he has quite an elaborate design going on: with his massive belt buckle and leather trimmings. Flipped behind, and you’ll see that he has a small pouch attached to his belt, and a flint. I love that they added this little detail onto Gloin, because he and his brother, Oin are best known for their firestarting skills using their tinderboxes. Gloin has a double sided head, with one side showing indifference and the other baring his teeth in the fiercest way possible. Sadly, his facial features are completely covered by his massive beard, but it’s nice that Lego decided not to cut corners and only give us one face. 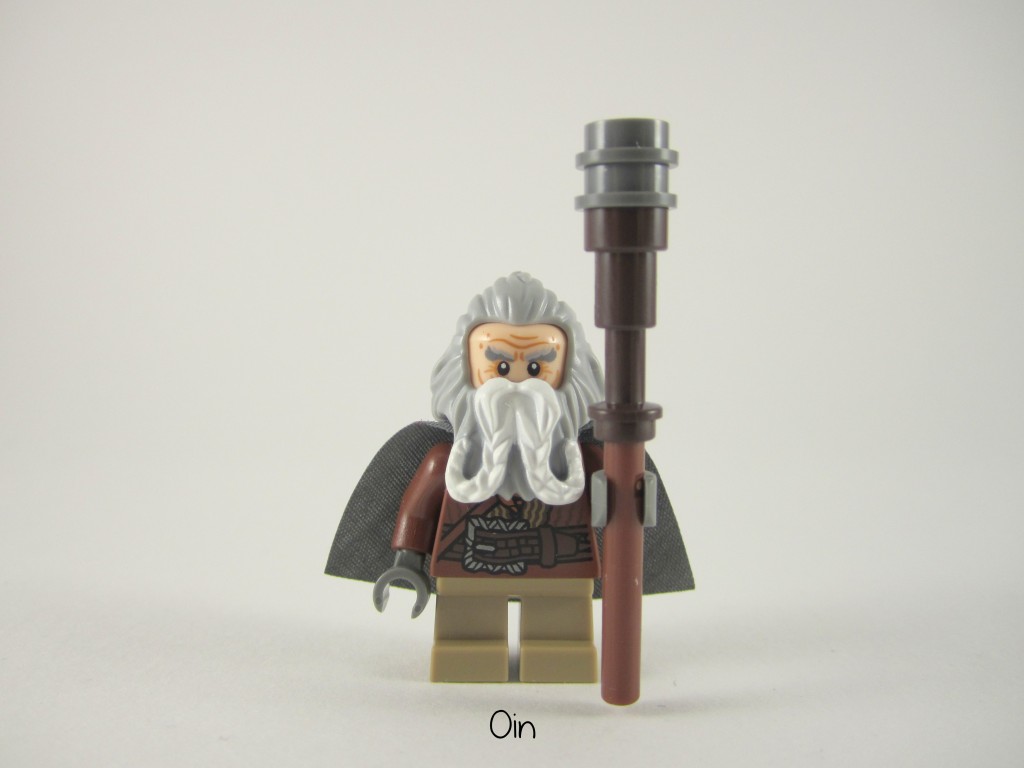 This is Gloin’s elder brother Oin. Unlike his ginger-bearded brother, Oin being older sports a very quaint grey headpiece, accentuated by two curling white whiskers. Unlike Gloin, whose hairpiece is made out of regular Lego material, I was disappointed to discover that Oin’s hair/beardpiece is made out of the squishy plastic that reeks of a Chinese factory. Unlike his axe-crazy brother, Oin prefers an iron staff as his weapon of choice. 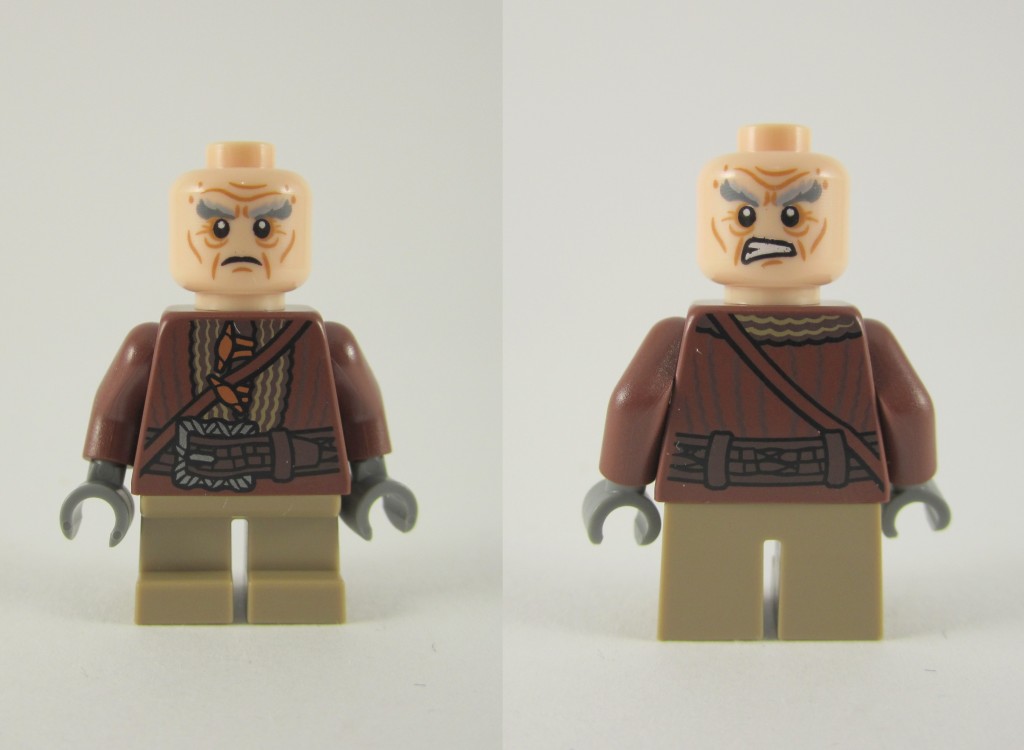 Like Gloin, Oin also has a 2 sided face with albeit with more wrinkles and bushy grey eyebrows. Oin also seems to dislike cold weather as he’s decked in a fleece jacket. The Lonely Mountain must get cold around winter! 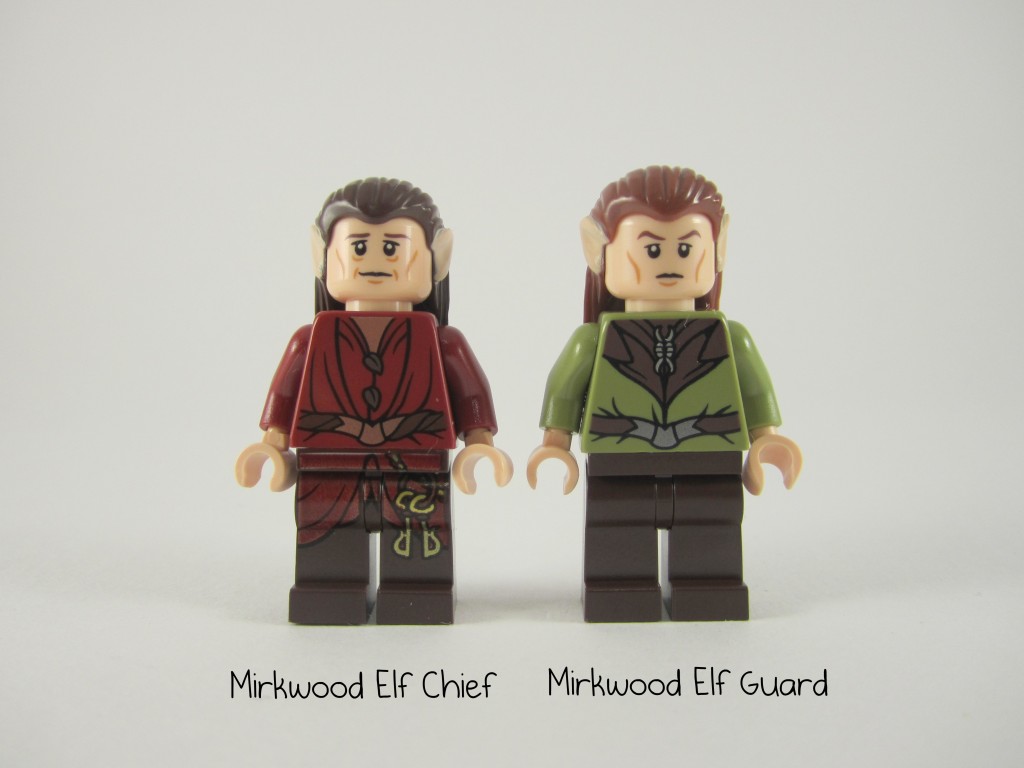 We also get 2 Elves that play the part of the jailors and chief of security in this set. It’s always nice to have more elves because of their fantastic headpieces. The detail on the Elf Chief’s body is quite well done, and I really like his red robes. On his legs, there are keys to the dwarf’s jail cells printed. The Elf Guard is garbed in green befitting of the Elves of Mirkwood. They have the same belt design, probably because there’s only one Elvish beltmaker in Mirkwood. 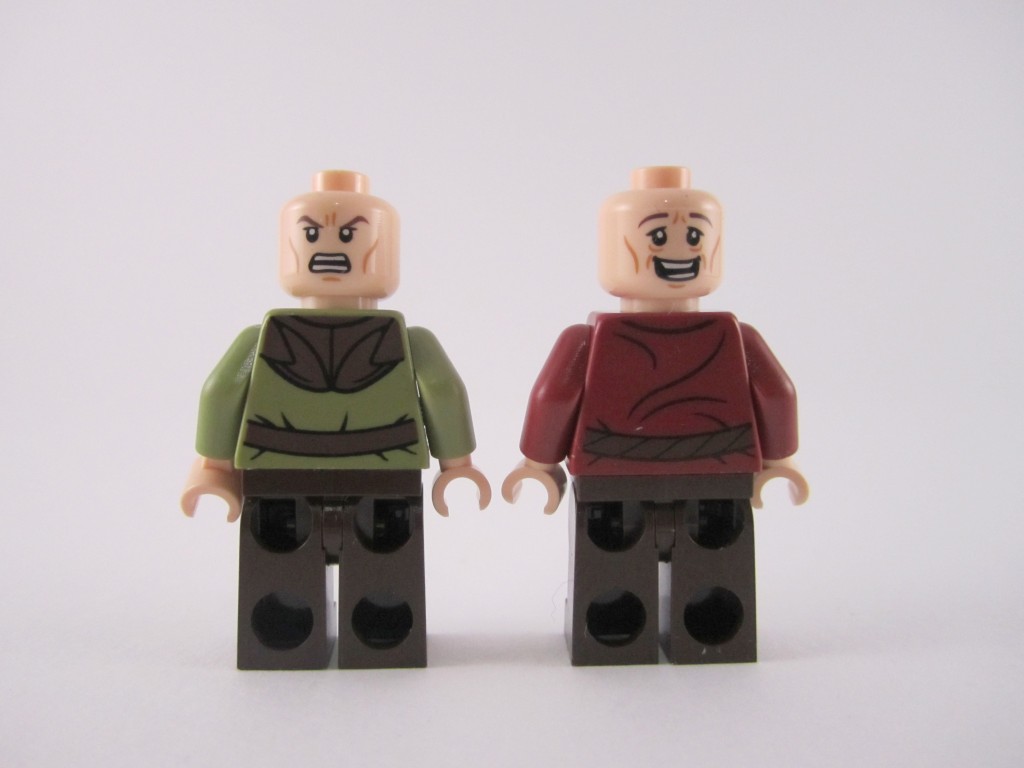 Here are their backs, which feature back printing to complete their outfits and their alternate faces. The Elf Guard has a fierce “battle-face”. The Elf Chief on the other hand has a face that tells one simple story: alcoholism. 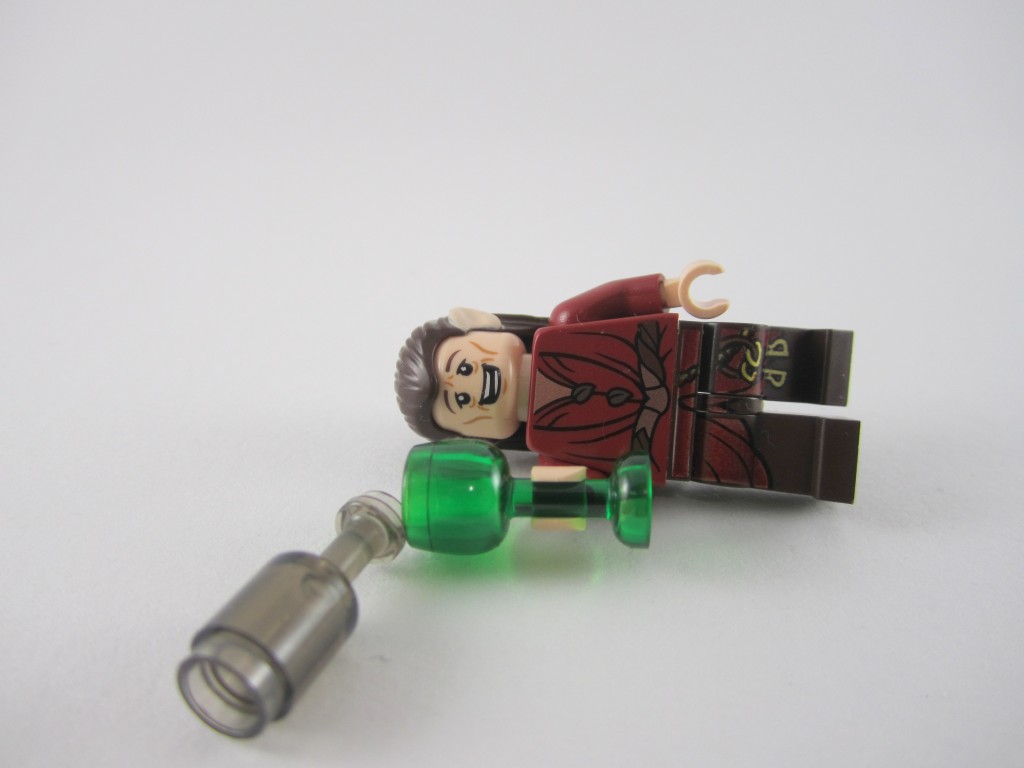 Yes, the Chief of Security of the Mirkwood Elves is a raging alcoholic and drinks a little bit too much from the many wine casks that he’s in charge of. I think it’s absolutely hilarious that Lego would give him a drunk face and this minifig is pretty much worth getting the set for. 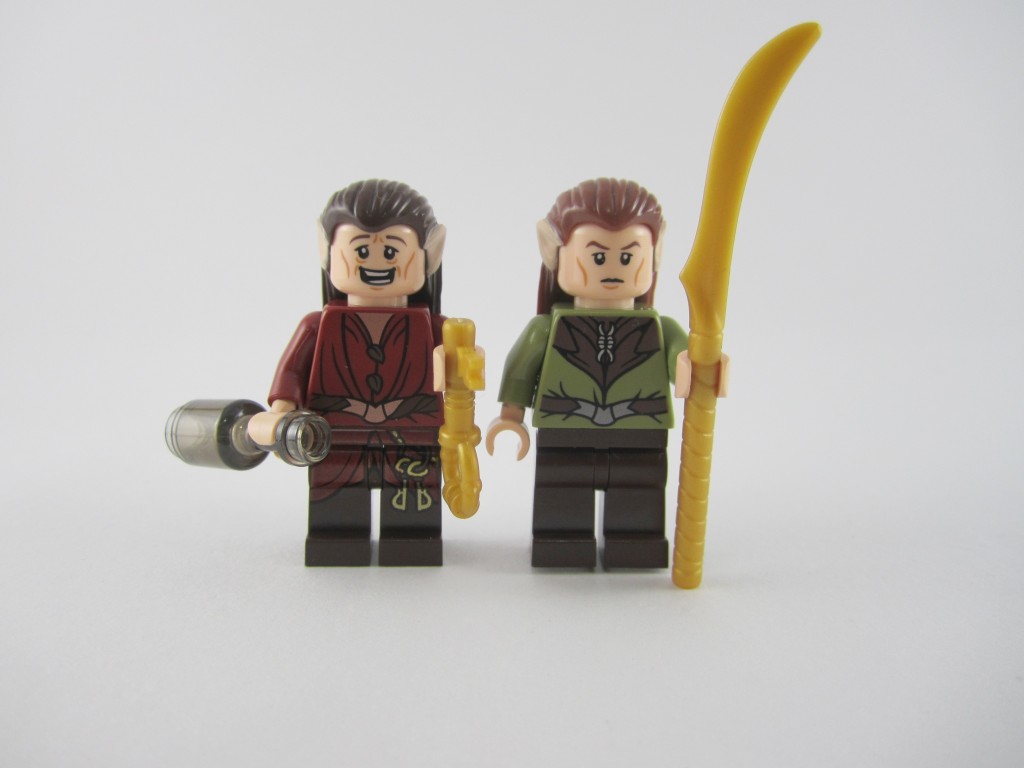 The Elves come with some nice accessories, the bottle for our drunk Elf Chief as well a key for the jail cells. We also get some Elvish swords in pearl gold as well as some Elven bows. 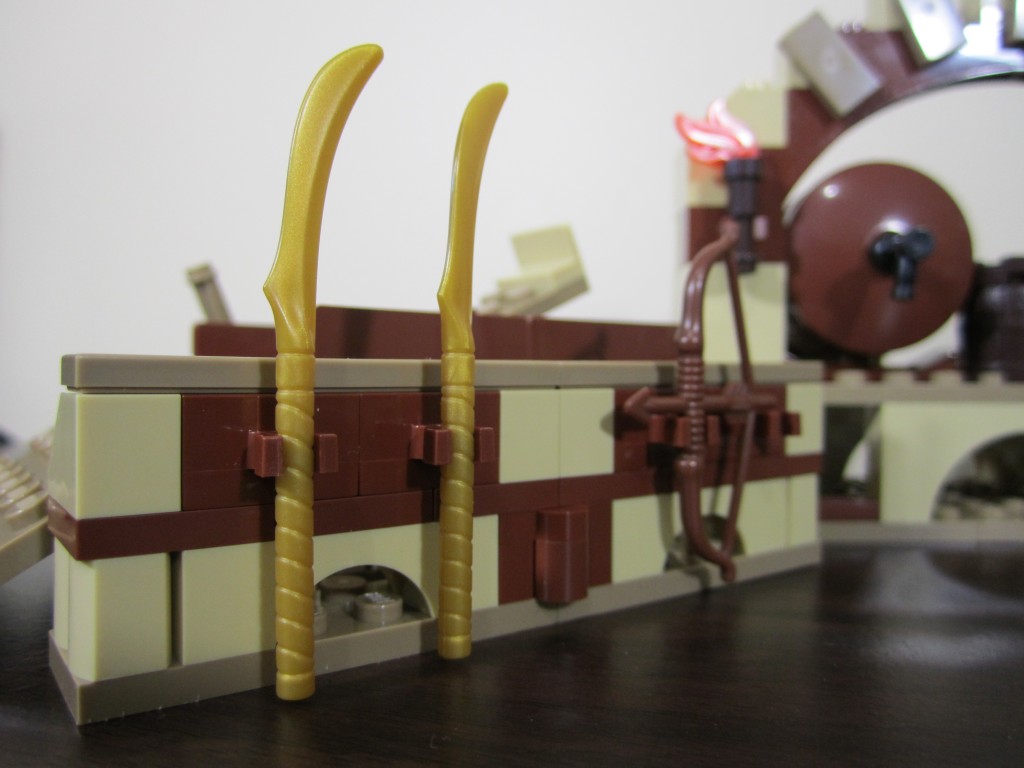 The weapons are placed in a little armoury stand. This is a bit of a peculiar addition to the set, since it serves no real purpose to boost the aesthetics of the set. My guess is that this was added in to to bump up the set’s low piece count. 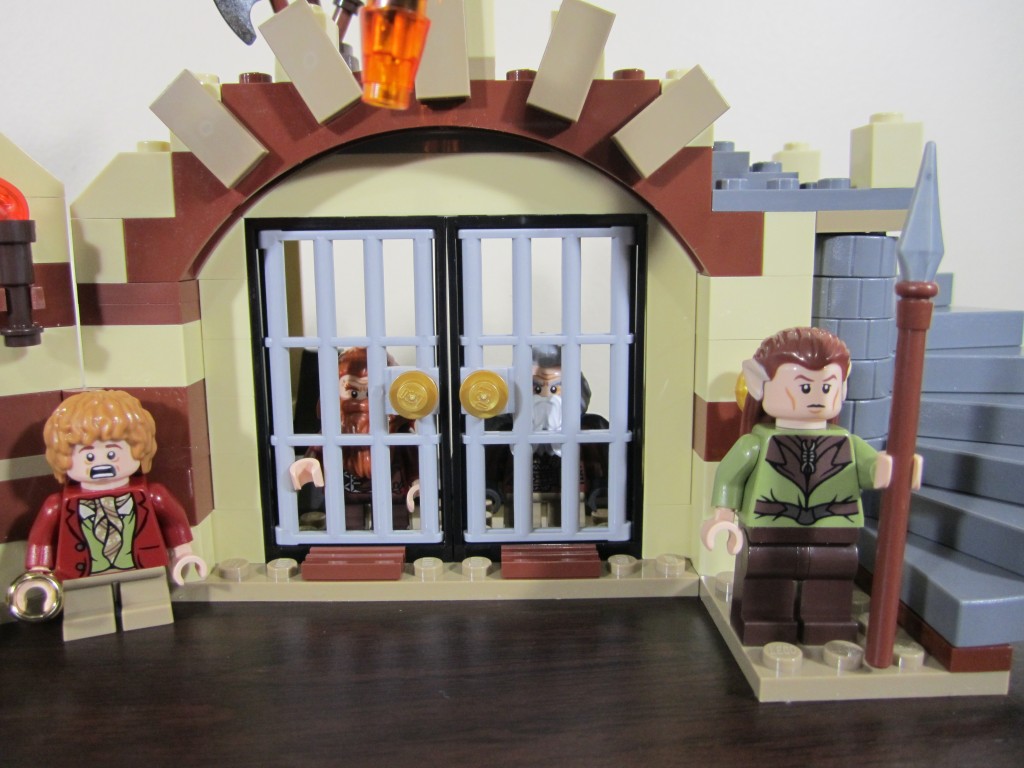 Gonna be showing off some of the display set ups and play features of the set. The jail has sufficient space for both Oin and Gloin, with the Elf Guard keeping watch outside. With the One Ring on, Bilbo is invisible and attempts to hatch a plan to free the dwarves.

The jail also has a play function where if you pull a lever, the back of the jail cell pops open. It’s quite a standard play feature to have in sets where there’s a wall or gate that can be busted open. 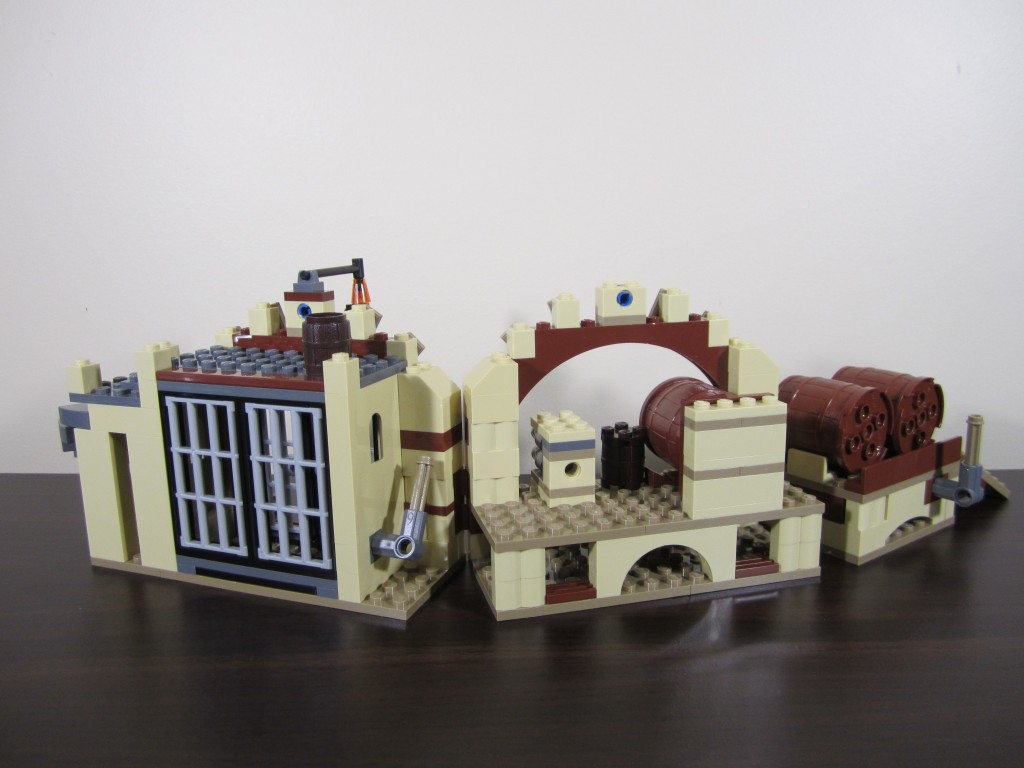 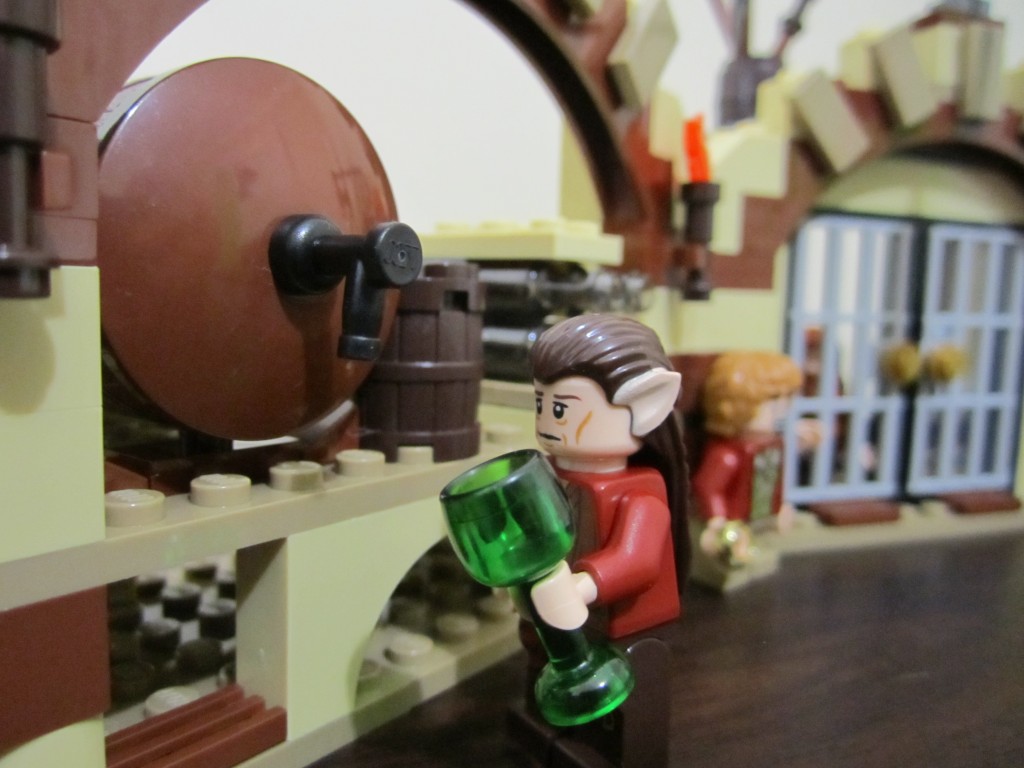 The Elf Chief decides to savour some of the vintage wine stores in the barrels to celebrate the successful capture of the Dwarves. I like how the wine casks are designed, very simple and effective use of the tap piece. 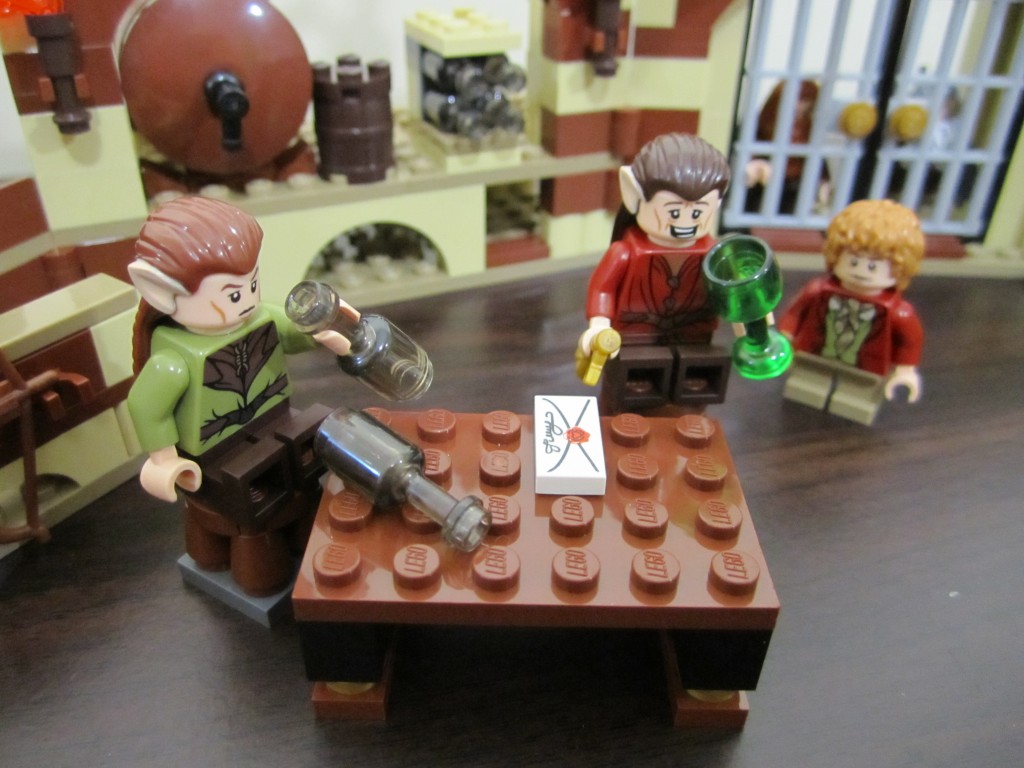 He invites the Elf Guard over for  drink at the table as Bilbo watches on, waiting for a window of opportunity. 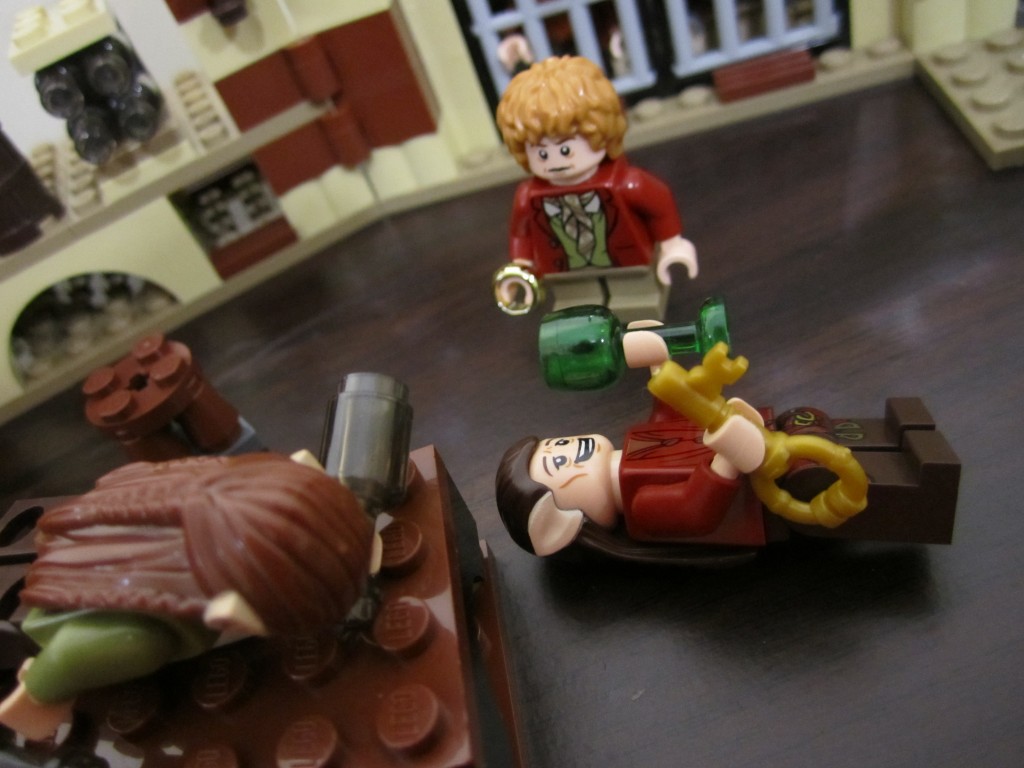 Success! The Elves have drunk themselves to an early bedtime. Here Bilbo sneakily steals the jail cell key from the Elf Chief who has blacked out thanks to Thranduil’s potent wine collection. 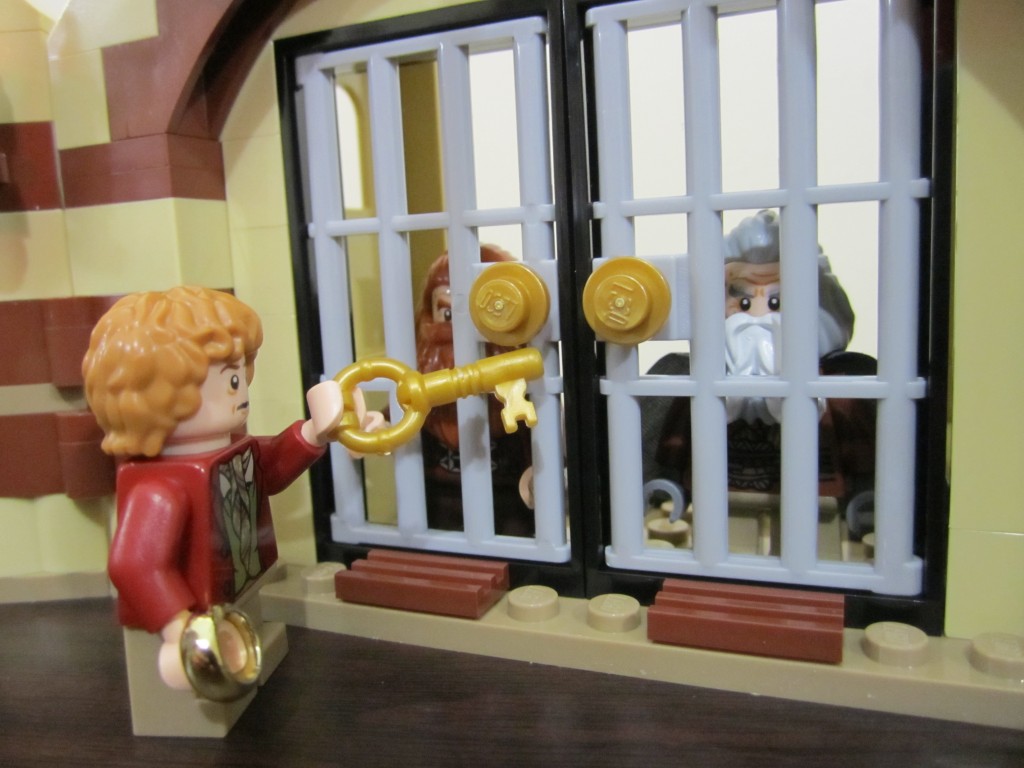 With the jail keys, Bilbo is able to free Oin and Gloin from their cells. 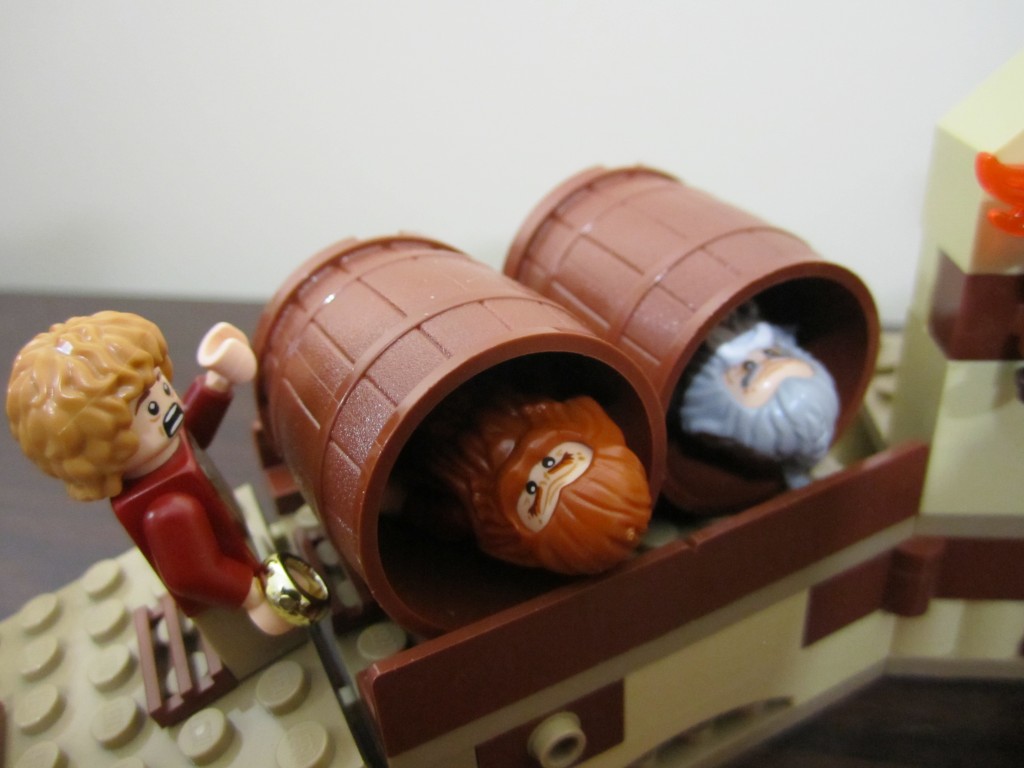 What’s the best way to get 13 Dwarves out of Thranduil’s kingdom? Sneak out into the rivers via empty wine barrels!  Bilbo comes up this brilliant plan after discovering that the Elves return empty barrels to Esgaroth, the Lake-town that supplies them with food and drink. In the movie, expect to see this hilarious scene pan out with soggy dwarves bobbing in a swift moving river but with a little more action thrown in as the Elves pursue them, as the trailer hints.

There’s a little play feature where you can flick a lever to make the barrels roll down the ramp. I’m not normally a fan of these play features but I like this particular one because it complements the theme of the set so well. 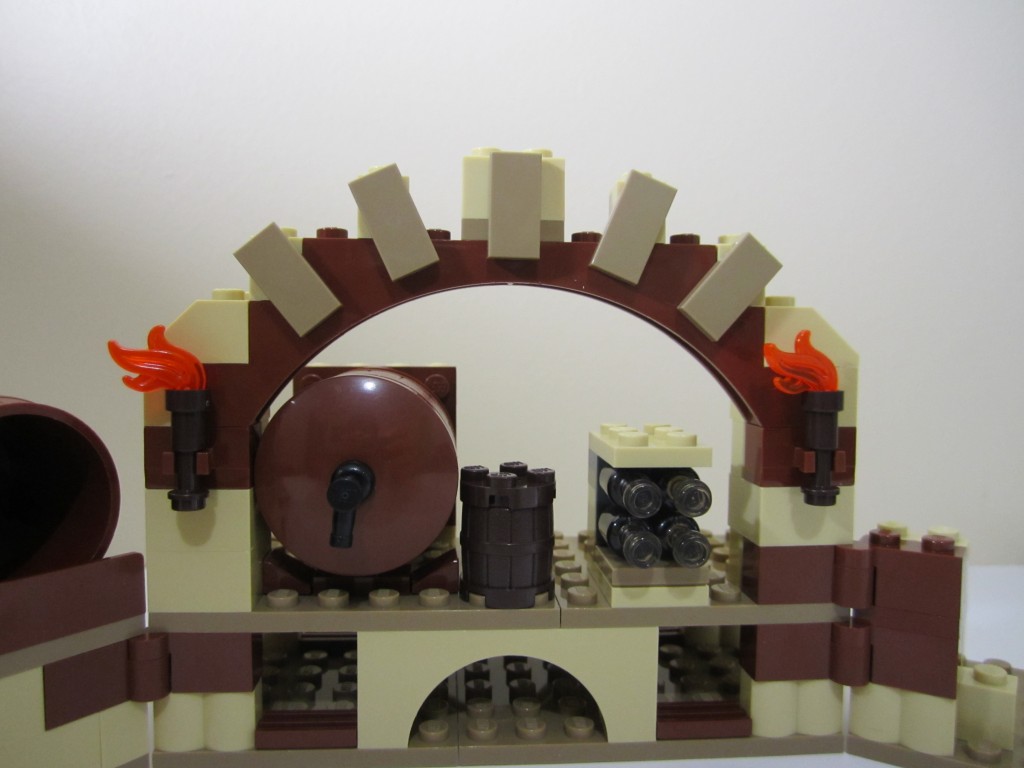 Another great building technique is the fittings that adorn the arch that are made out of tan 2×1 tiles. I feel that it gives this set a whole lot of charm and character. 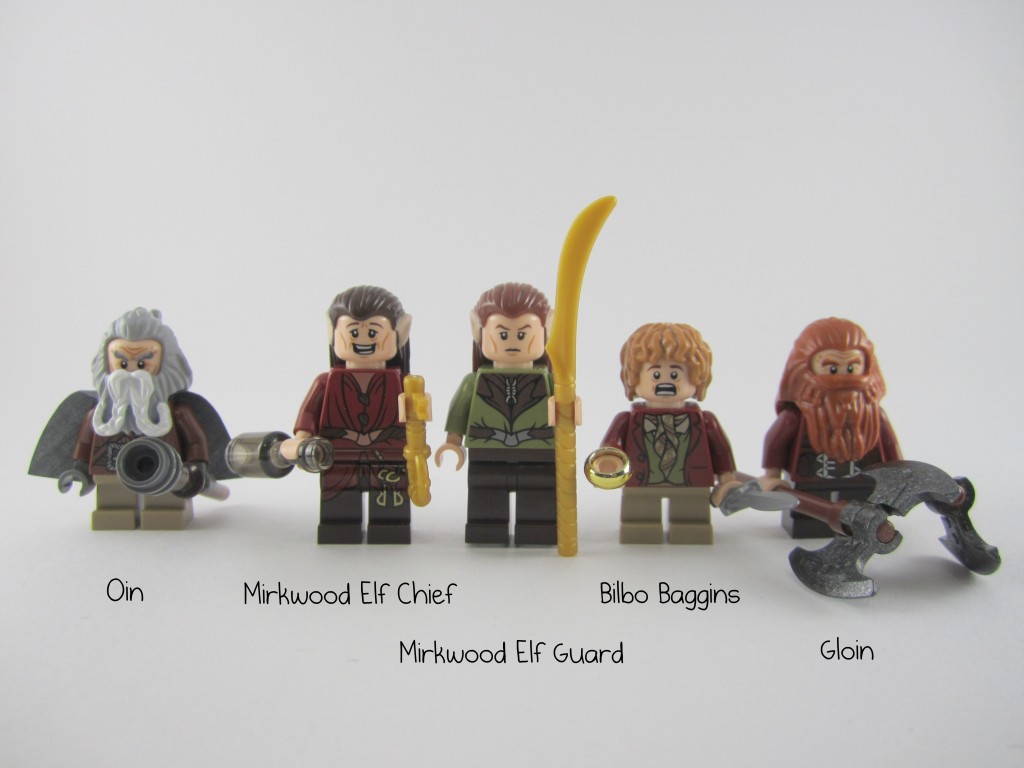 Final Thoughts: This was a really fun set to put together, and it makes a really nice preview set for the second Hobbit movie. It’s a little thin with only about 300+ pieces and for the price you’re paying, it really leaves you hungry for more. The minifigs, as with most licensed sets these days are the main draw for this set. Parts-wise, we get a lot of great accessories like the One Ring, Sting, Elven swords, wine glasses and bottles and  whopping 3 large wooden barrels which are pretty nice to have. The play features are nice bonus additions and I’m pretty glad we don’t have any lame flick-fire missiles in this set. As a display set, it’s rather average because there are a lot of disparate components like the weapons rack, table and chairs, and mini-wine cask which produces a pretty haphazard when taken in as one.

Should You Buy It?: It’s pretty hard to recommend getting this set unless you’re a hardcore Hobbit fan and have put your mind to collecting all 13 Dwarves. If you’re after Bilbo, he can be obtained in the much smaller Riddles in the Dark set. At the price point of $69.99, there are much better sets to purchase which really contain more bricks and better minifigs, in my honest opinion.