I was delighted when DK’s Great LEGO Sets: A Visual History showed up at my doorstep. This was a book I had been excited about reviewing this book that I wasted no time getting into the book and bumping a few other reviews I have been working on out of the way.

Great LEGO Sets like its title suggests is a visual anthology showcasing some of the greatest LEGO sets in the company’s illustrious 66 year old history. It’s an amazing read and I spent the entire evening going through almost the entire book and was frankly blown away by the contents of the book.

Thanks once again to DK Australia for sending me the review copy!

You can purchase Great LEGO Sets: A Visual History from Penguin Australia’s online store for $49.99. 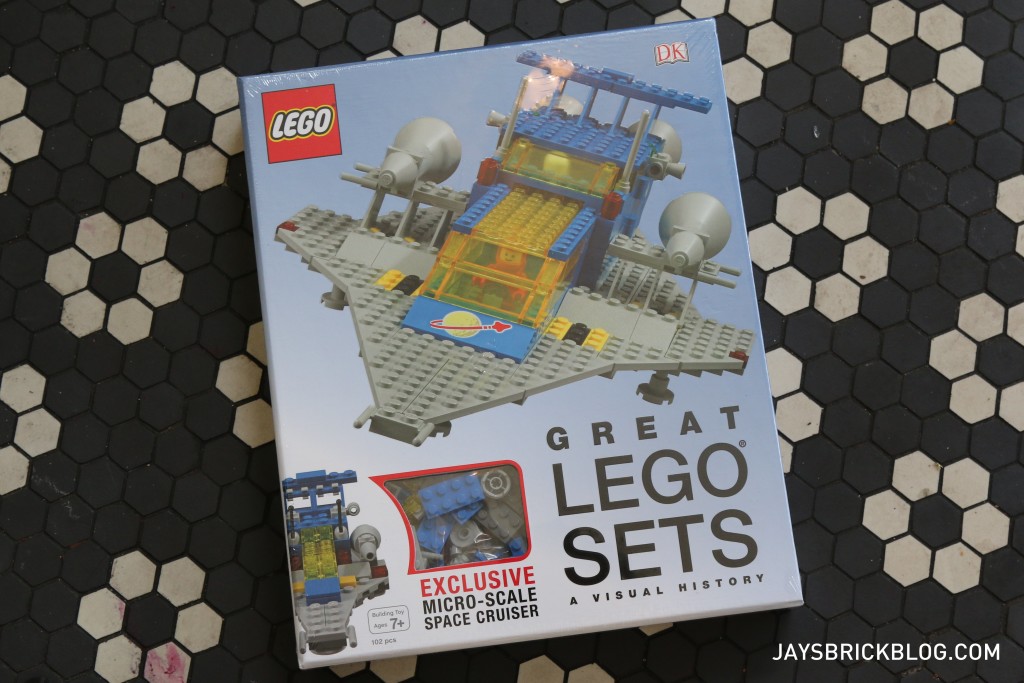 I totally judge books by their covers – the cover to Great LEGO sets does not disappoint with one of the most coveted LEGO sets in history, the iconic and theme-defining 928 Space Cruiser and Moonbase. The Space Cruiser on the cover sets your expectations from the get go, that you’re going to be plunged into a whirlwind adventure of nostalgia, envy, regret and admiration stirred up by the Great LEGO Sets of history.

There is also a small window which reveals the contents of a Micro-scale Space Cruiser that accompanies the book. More on that towards the end of the review, but first let’s take a closer look at the book itself. 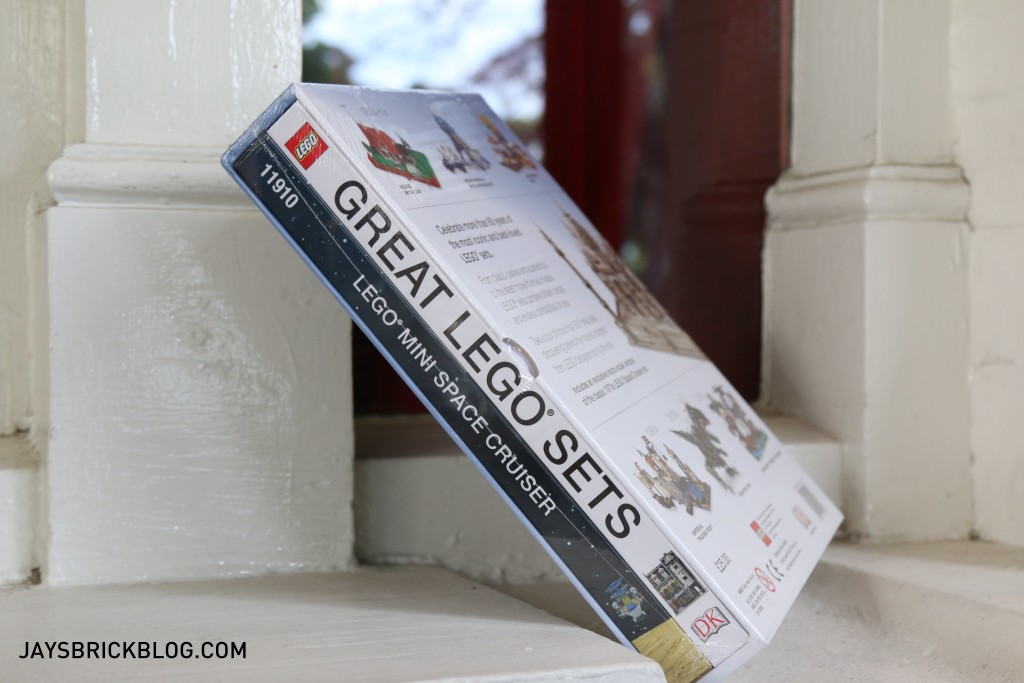 Don’t let the hardcover casing fool you, the actual book isn’t as thick as it seems. Half of the space is devoted to the Micro-scale Space Cruiser’s “box”. It’s actually quite a clever visual merchandising hack, making the entire package look a lot larger than it actually is. 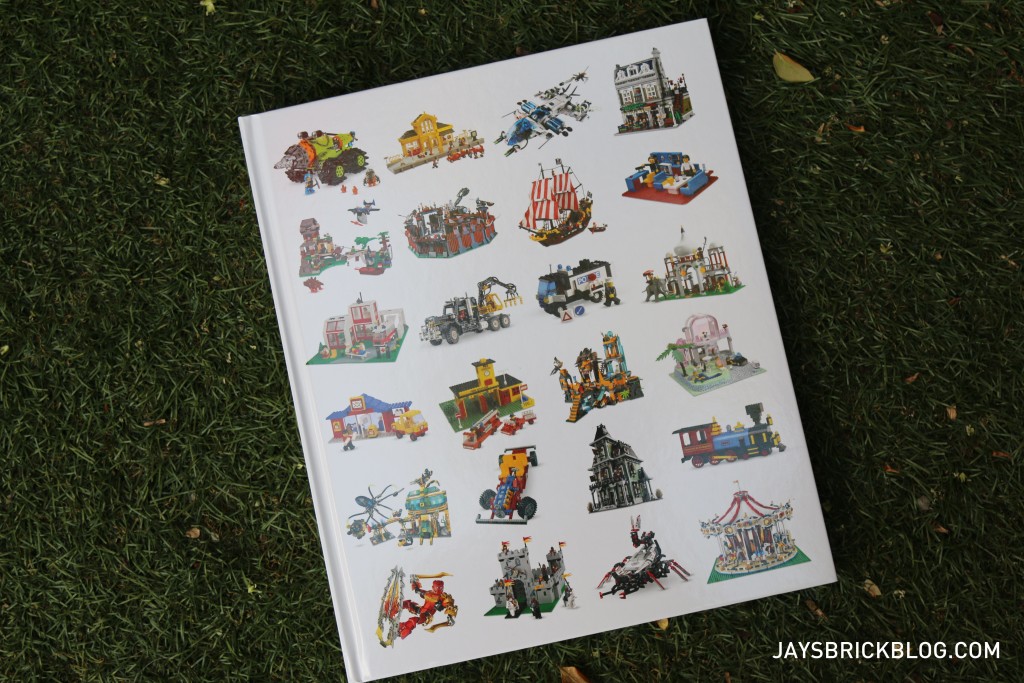 Here’s the actual cover of the book in all its hardcover glory. I actually like that there’s no fancy typography or even the book’s title on the cover – just some of the greatest LEGO models in existence laid out in a grid. How many of these sets do you own? 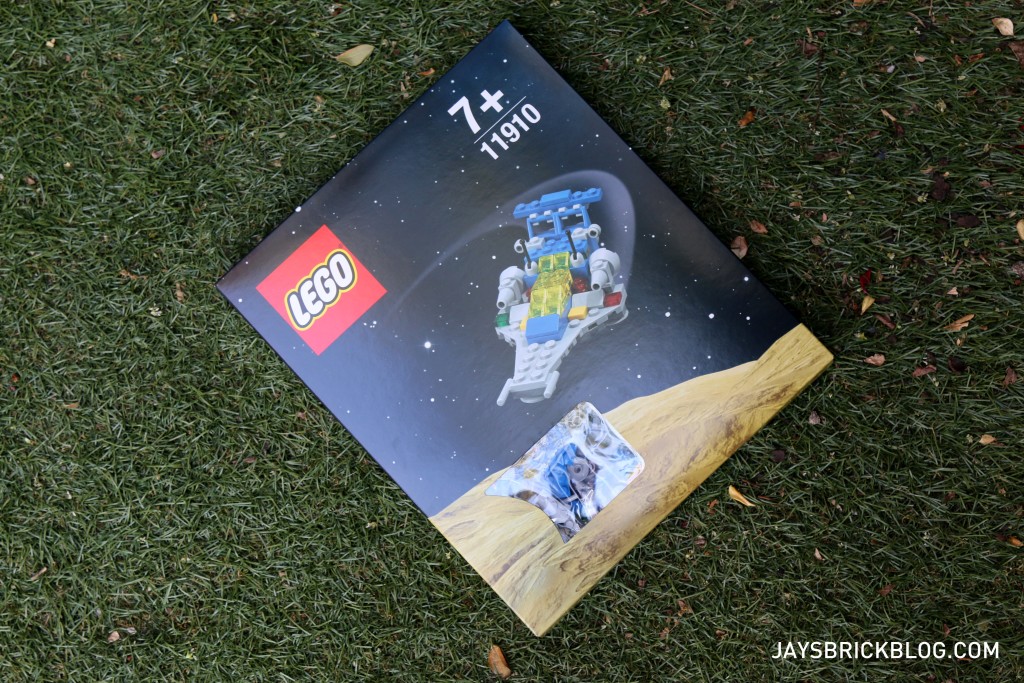 The second component in the case the book-shaped box of the Micro Space Cruiser which looks pretty cool. I’ll be holding on to this box as I really like the simple minimalist design. 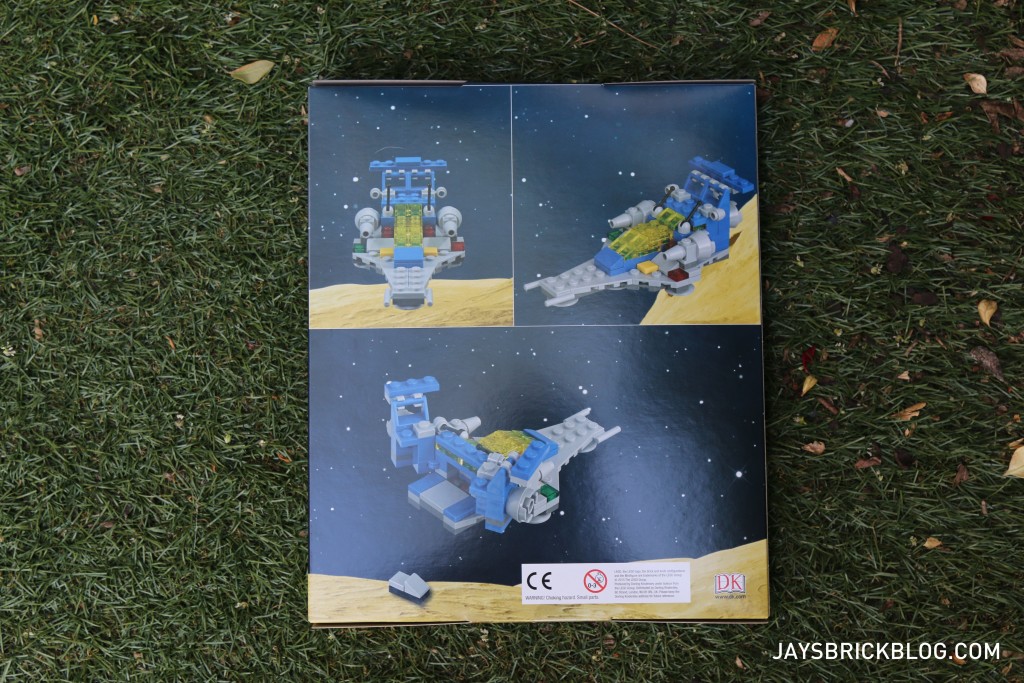 On the flipside, you get a better look at the Micro Space Cruiser from a variety of angles. 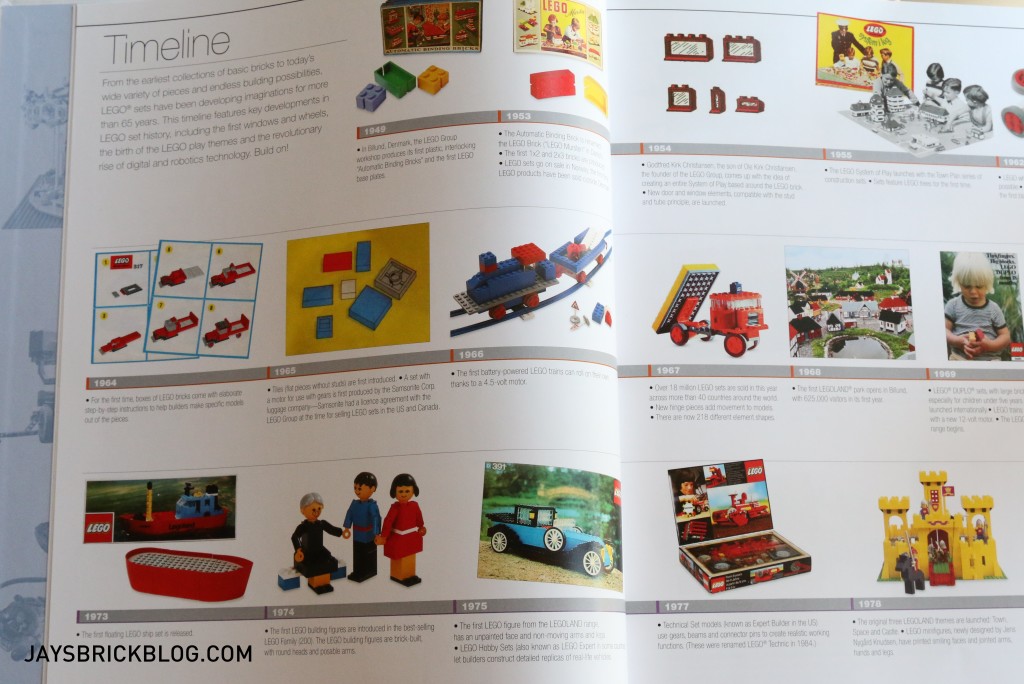 The book starts out strongly with a timeline spanning several pages charting some of the major milestones of LEGO’s history as a toymaker. It doesn’t include any of the wooden toys that defined LEGO’s early history but jumps straight into the genesis of the interlocking system of bricks.

The timeline sets the tone of the book brilliantly, preparing you before you embark on a journey through some of the best LEGO sets of all time. 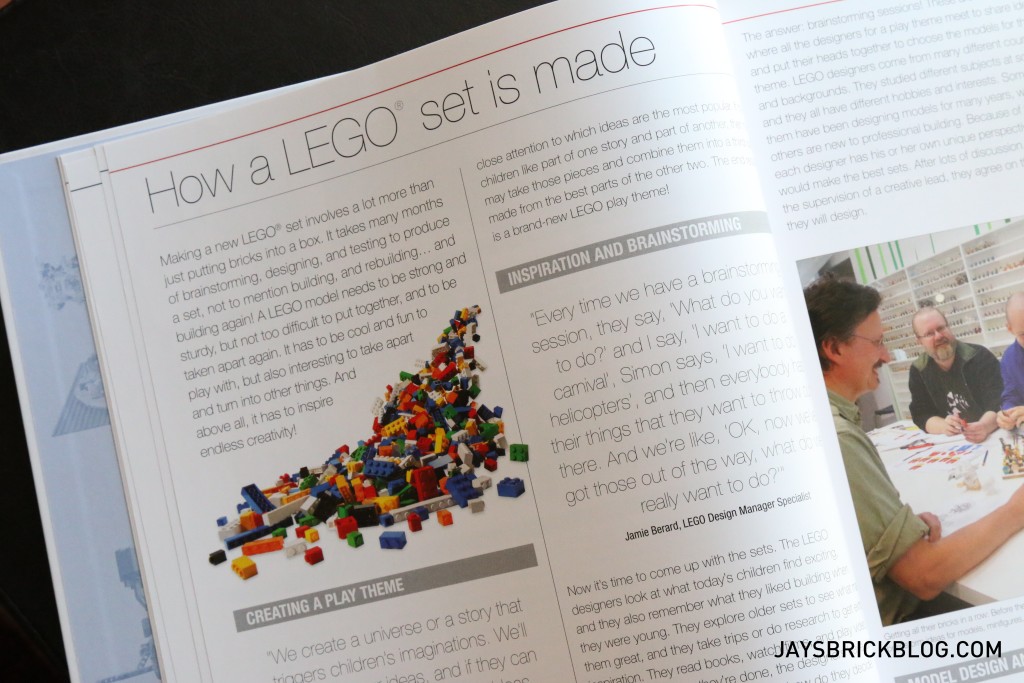 In the introduction, there is also a great section on how LEGO sets are made, giving further context to how sets, themes and designs are birthed in LEGO’s headquarters in Billund. It’s very fascinating information, especially for younger LEGO fans who I guess would probably be eager to learn how their favourite sets are conceptualised.

There’s also plenty of insights from LEGO Designers who reveal candid details about their jobs which should be brilliant for aspiring LEGO Designers to learn what a designer really does. 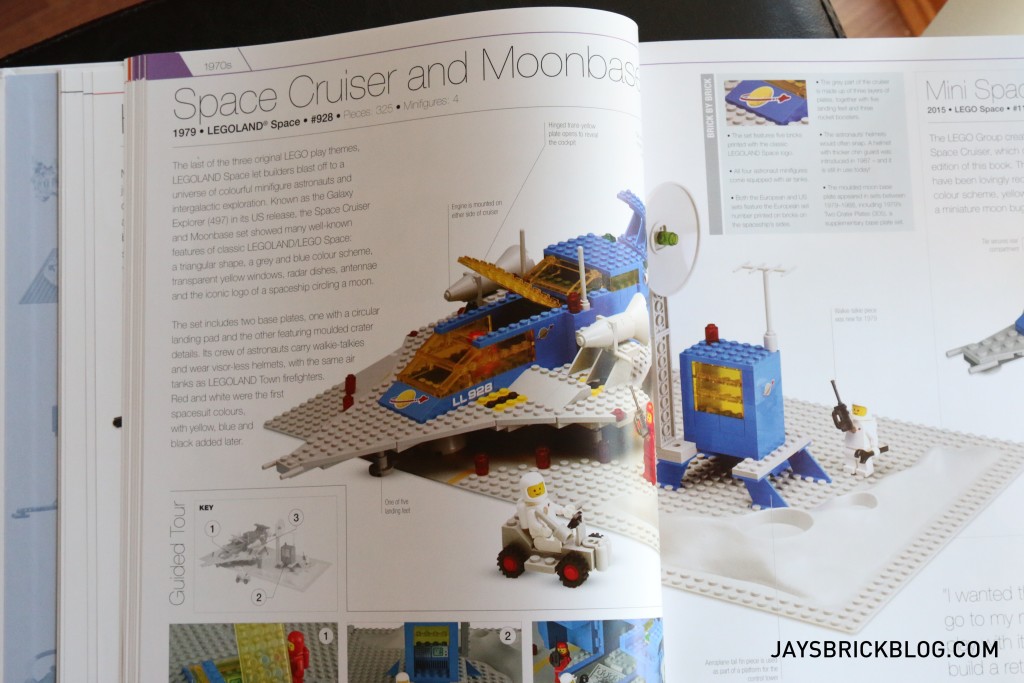 I spent more than an hour flipping through the book. LEGO sets are presented in chronological order, so you’re able to chart and appreciate how much LEGO has evolved over the decades. From simple cars and houses, to the introduction of minifigure characters, to Classic Space and Pirates all the way to today’s complex Expert sets like the Modular Building Series, this book has it all.

This has got to be my favourite DK LEGO book so far – I’m totally not exaggerating. It’s essentially a comprehensive glossy catalogue of fantastic LEGO sets. The photography is marvelous and I enjoyed gawking at the vintage LEGO sets and reading about different advancements and features that were slowly introduced over the decades. 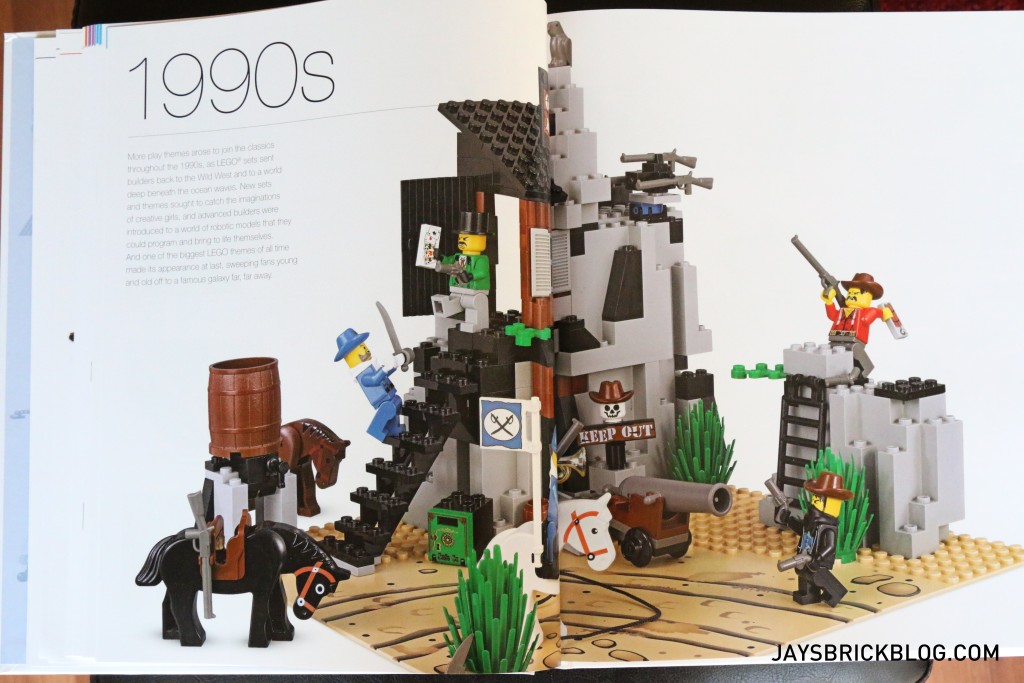 The 1990s section in particular was my favourite. I was a kid in the 90s and my LEGO experience is defined by the likes of Aquanauts, M-Tron, Western, Wolfpack and Town. Reliving many of these sets that I used to own and ones that my parents could never afford was a huge rush of nostalgia.

No matter how old you are as a LEGO fan, I guarantee that you will linger in the decade of your childhood reminiscing about sets that captured your attention as a kid.

Flipping through the book, I also found myself making a mental checklist of vintage LEGO sets that were missing from my collection that I would like to one day own. Over the past two years, one of my personal projects has been to slowly accumulate vintage sets from my childhood and beyond that I never owned due to financial constraints. This book is definitely a handy visual guide for those who want to embark on a similar pursuit. 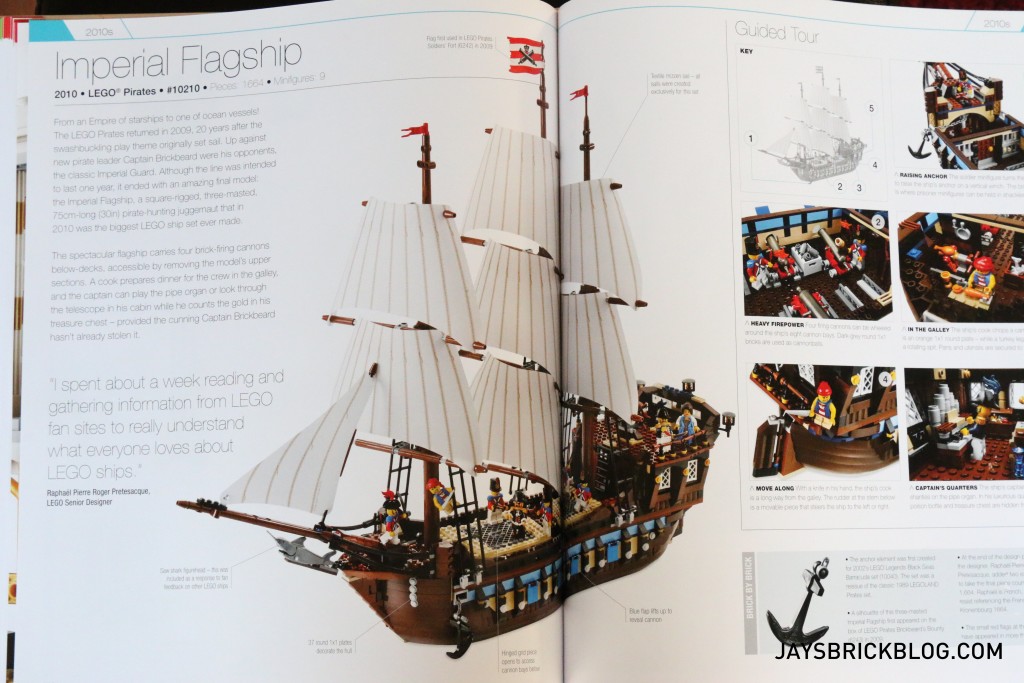 One probably unintended effect of the book’s writers is the evoking of deep pangs of regret that most AFOLs can probably identify with. The sets that got away. I wrote about this briefly about LEGO sets that I’ve missed out on either due to ignorance or financial constraints that have gone on to become recognised as LEGO Icons.

Flipping through the pages and encountering recent sets that I missed out on such as the Imperial Flagship or the Haunted House filled me with deep pangs of regret. Till this day, I still kick myself for not buying Haunted Houses for $169. 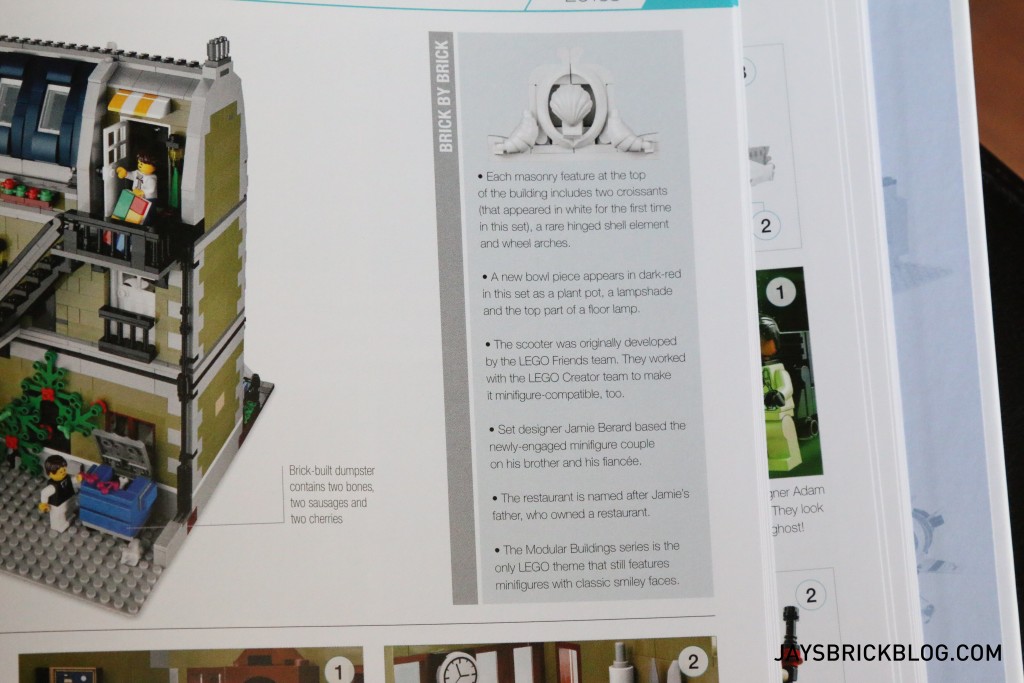 This book is more than just a collection of pretty pictures – it also contains a wealth of trivia and background information about the sets such as Easter eggs, design inspirations and various references that designers love to sneak into their sets.

Quotes from rock star LEGO designers such as Jamie Berard and Marcos Bessa really give the sets featured in this book plenty of character. I especially loved how the designers opined about the sets from their childhood – many of which inspired them to pursue a career as a LEGO Designer.

There is plenty to love for LEGO fans both old, new and returning in the Great LEGO Sets book. I’ll even go as far to say that this book is an essential supplement to any LEGO fan’s coffee table or study – with so much historical content and gorgeous pictures of outstanding LEGO sets through the ages, it’s easy to lose yourself in DK’s Great LEGO Sets book. 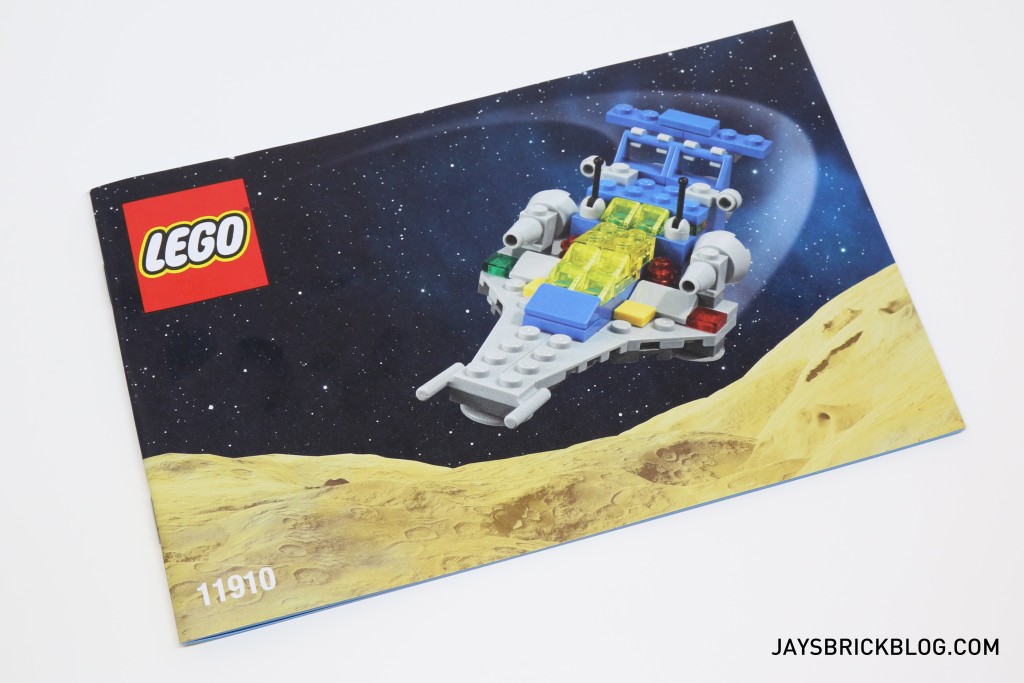 The 11910 micro-scale Space Cruiser included in the set is a special treat, especially for nostalgia-driven LEGO fans. If you don’t own the iconic 928 Space Cruiser spaceship, well, this is your chance to own a mini version of what is considered the best LEGO Spaceship of all time.

The instruction manual is a lot thicker than you would expect from a micro-scale set. 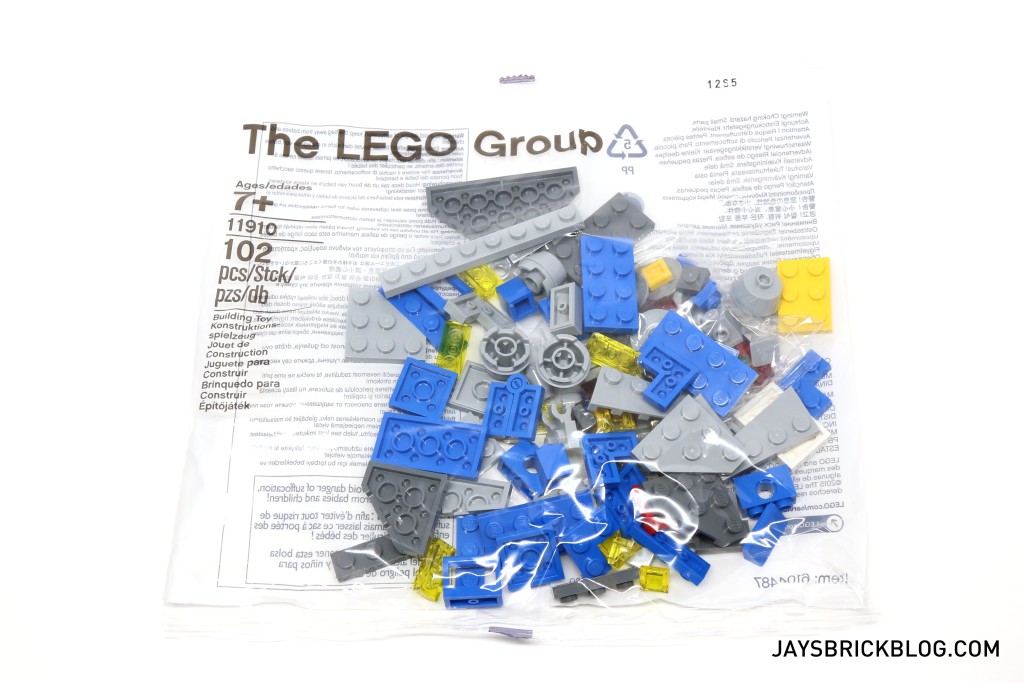 Here are the contents of the box, a neat little polybag containing the iconic colours of Classic Space – blues, greys and trans yellows. 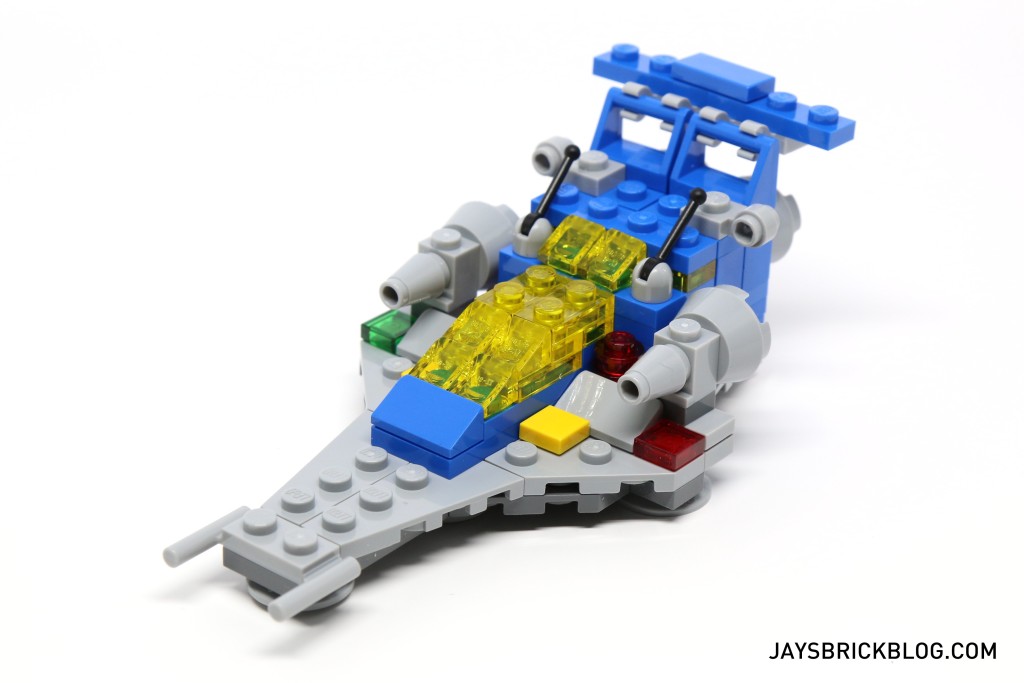 The completed model is brilliant, accurately shrinking down the original Space Crusier but retaining most of its defining features such as the prominent trans-yellow cockpit, triangular shape and massive thrusters on each side.

Another bit of trivia: the micro-scale Space Cruiser was designed and conceptualised by Australian LEGO Designer, Melody Caddick! 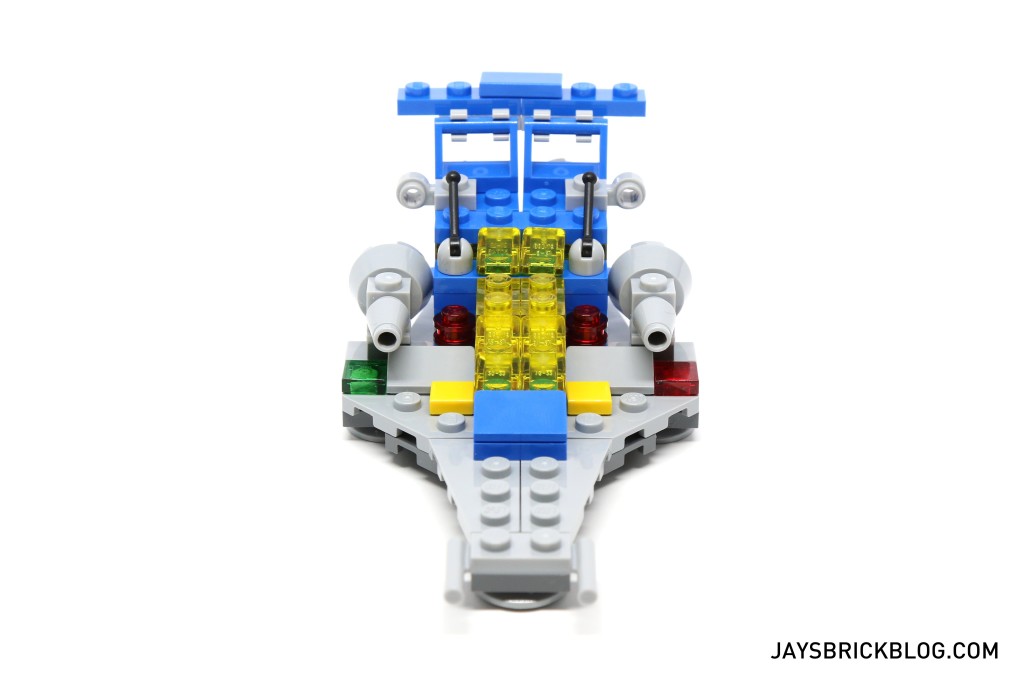 Here’s the view of the Space Cruiser from the front. 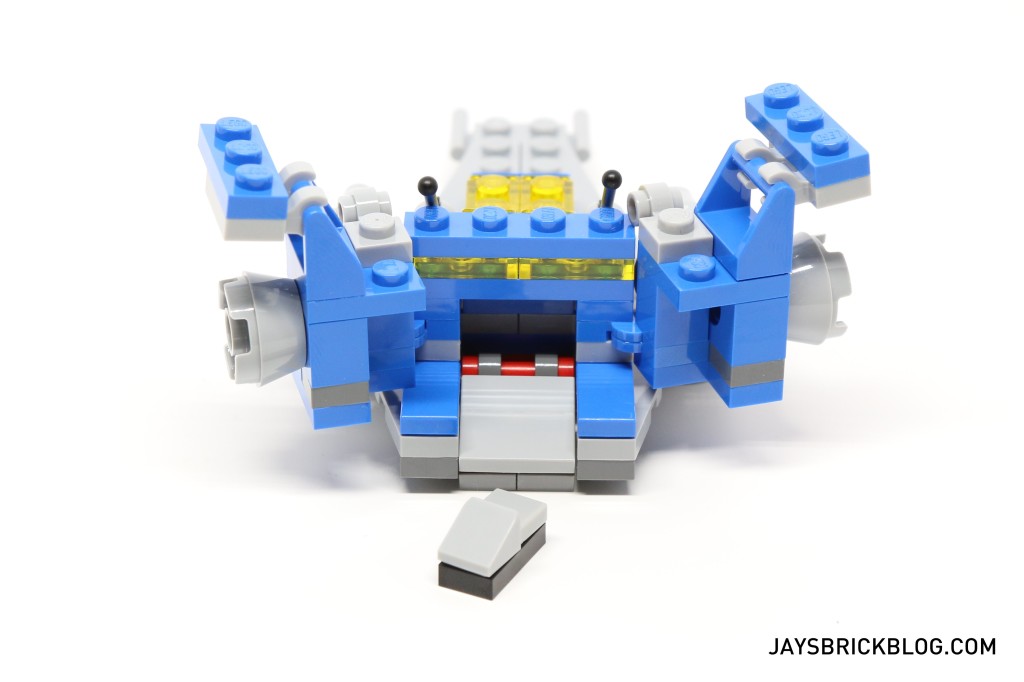 The micro Space Cruiser had a special surprise built into it – the back splits open (just like the original) to reveal a docking bay, ramp and even a micro Moon Buggy that is hidden inside! This play feature was one of the defining features of the original 928 Space Cruiser so I’m glad that they managed to incorporate it into the microbuild.

Another fantastic nod to the original is the use of a 2 x 1 tile to hold both halves together, the very same technique employed in the original! 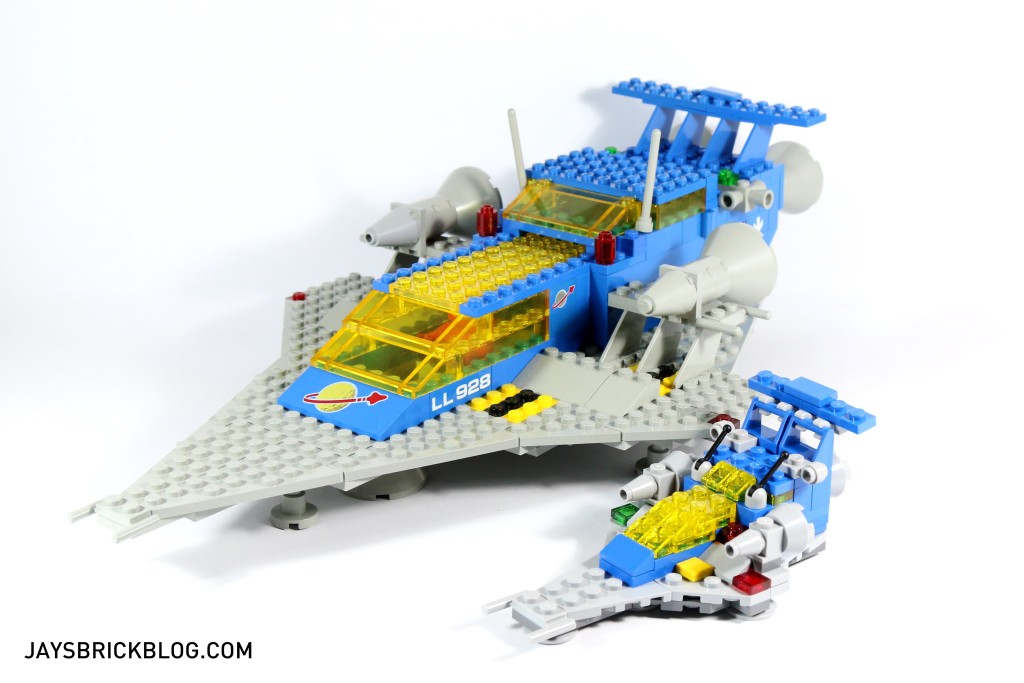 How does it stack up against the original? Here’s a comparison of the original Space Cruiser and its micro-counterpart! Cute eh?

I count myself very very fortunate to own 928 Space Cruiser and Moonbase. My copy is in amazing condition and the best thing is that I didn’t have to pay a small fortune to get it. I managed to snag it almost by sheer luck from a secondhand seller online.

I consider 928 Space Cruiser and Moonbase to be one of the crown jewels of my LEGO collection and one of the sets that I am most proud of owning. 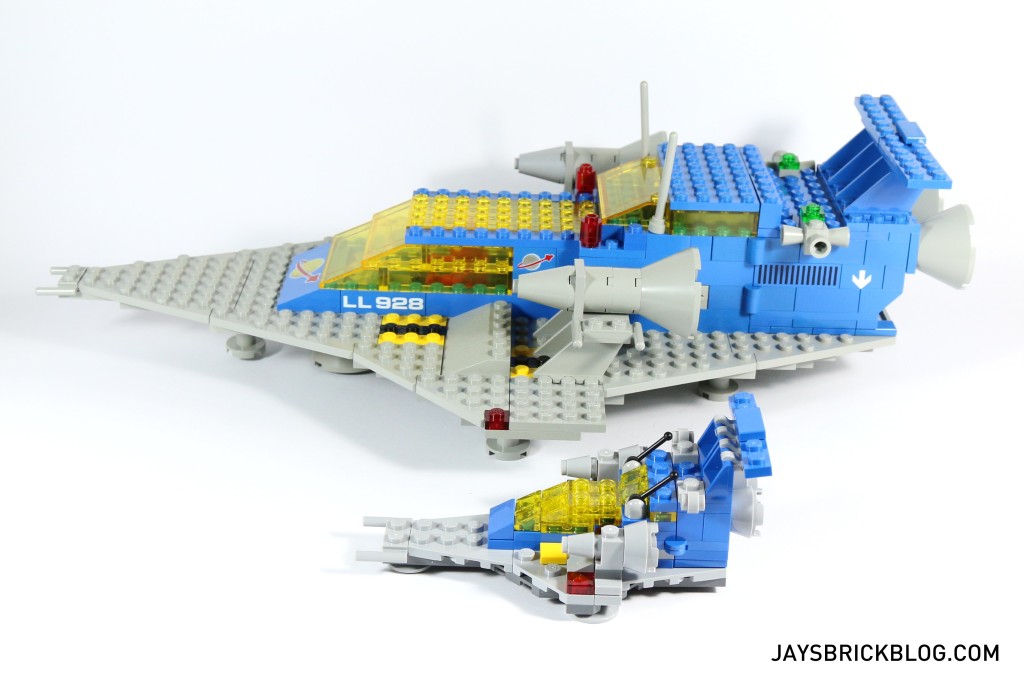 Here’s a side view comparison. 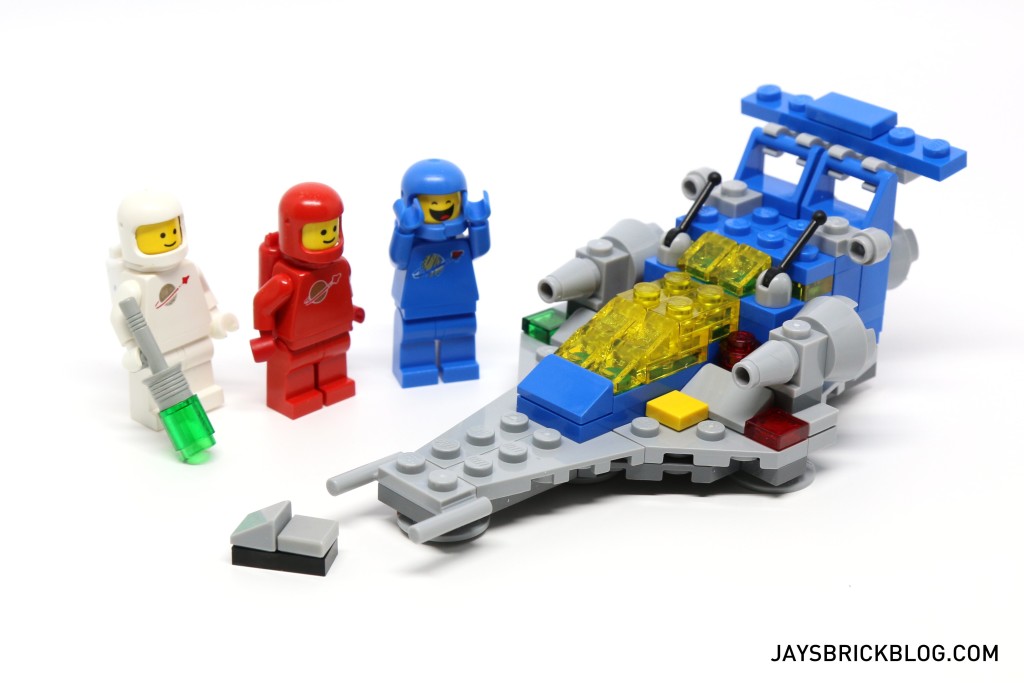 And here’s some Classic Space minifigures and Benny geeking out over the micro Space Cruiser.

Final Thoughts: I cannot recommend DK’s Great LEGO Sets: A Visual History enough. This is one of the best LEGO books ever released and should be a mandatory buy for any one with an above average interest in LEGO. I had a blast flipping through the pages and enjoying all the great LEGO sets featured through the ages.

It will be the perfect companion to any coffee table, and its incredibly useful to show off to non-LEGO fans to give them idea of why LEGO is such a great toy and hobby to have. The sets featured in this book will amaze and evoke feelings of nostalgia with anyone who has played with LEGO in their childhood.

The brilliant photography, especially of older LEGO sets is another huge bonus. This book can also serve as a catalogue or checklist of iconic LEGO sets, which is quite rare since you would be quite hard pressed to find professionally photographed images of some of these LEGO sets on the internet.

While the book’s $50 pricetag might seem a little daunting, the value that you get from this book more than makes up for it. With Christmas coming up, this book would make the ideal gift for any LEGO fans and I highly recommend adding this book to your collection.

To purchase Great LEGO Sets: A Visual History, you can visit the Penguin Australia online store or your nearest bookstore. The RRP for the book is $49.99 and you can often get these on sale if retailers discount them in catalogues. Always helps to keep an eye out for any promotions!

Special thanks to DK Australia for providing me with a review copy of Great LEGO Sets: A Visual History.