Chinese New Year is only days away, so it’s no better time to review what has become one of my favourite LEGO annual traditions – this year’s LEGO Chinese Zodiac Animal – the Pig!

For those that are unaware, the Chinese Zodiac is a system where each year is designated a particular Zodiac Animal, which goes around in a cycle of 12 years, unlike the Western Zodiac which rotates within a calendar year.

Since 2015, LEGO have released a special set commemorating the Chinese Zodiac – starting with the Year of the Sheep which I was all too eager to collect.

This year (2019) we get the Year of the Pig set which is now available as a limited edition gift with purchase through LEGO.com or LEGO Brand Retail Stores in the US and UK, or at Myer if you’re in Australia. 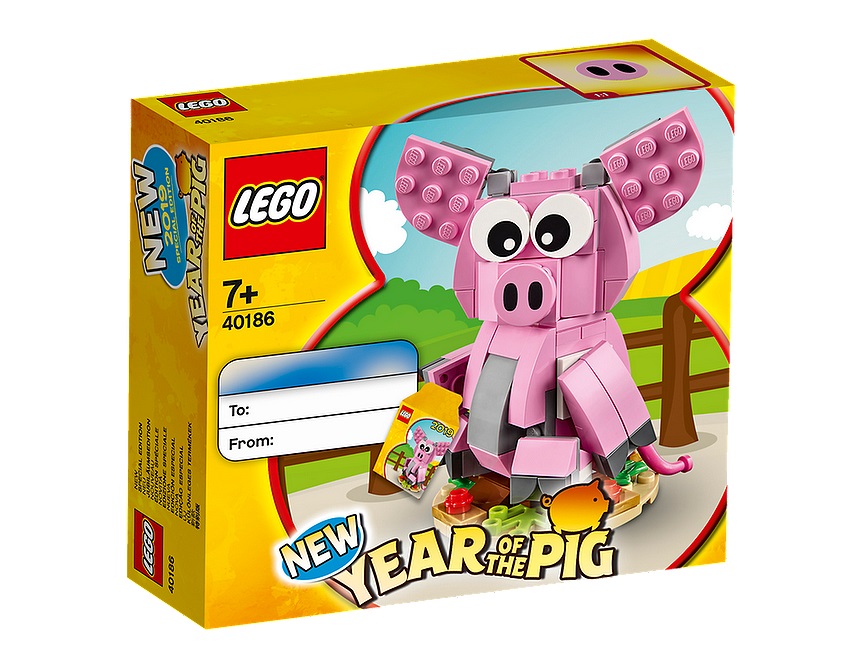 I really like collecting things, and I do love the idea that this is quite possibly the most challenging and (literally) time consuming themes to collect.

You literally have to wait 12 years to collect the entire Zodiac Animal theme, and I sure hope that LEGO keeps this up as I’ll be royally pissed if they cancel halfway.

As someone of Chinese descent, these sets much like this year’s Chinese New Year’s Eve Dinner mean a lot to me, and I am really glad that LEGO has invested in celebrating a big part of Chinese culture. 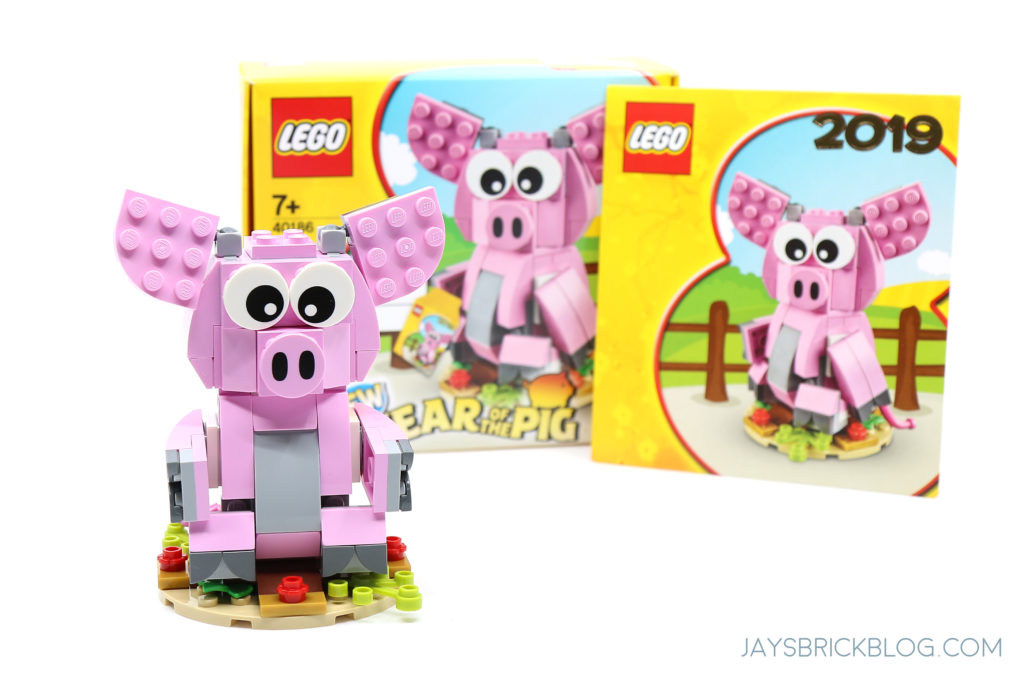 This year’s Chinese Zodiac Animal, the Year of the Pig follows the same design cues as previous years.

It comes in a special commemorative box, which includes a red packet (more on that later), and a small but pretty substantial model featuring a cute Pig. 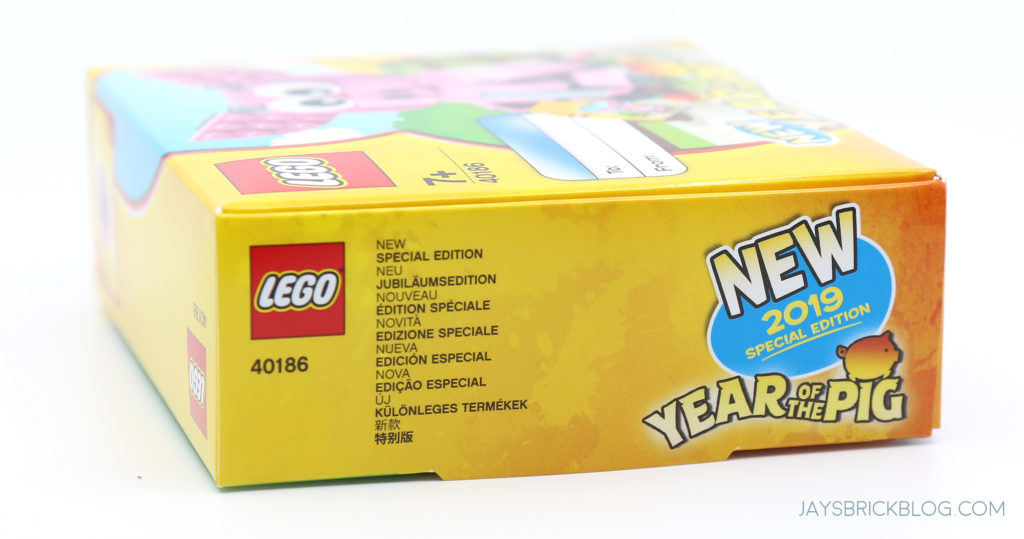 The boxes retain the same design elements such as the primary use of yellows and oranges. On the side is a big stamp that screams Limited Edition.

I also really like the extremely-obese pig on the Year of the Pig text. It looks like it’s going to explode at any moment. 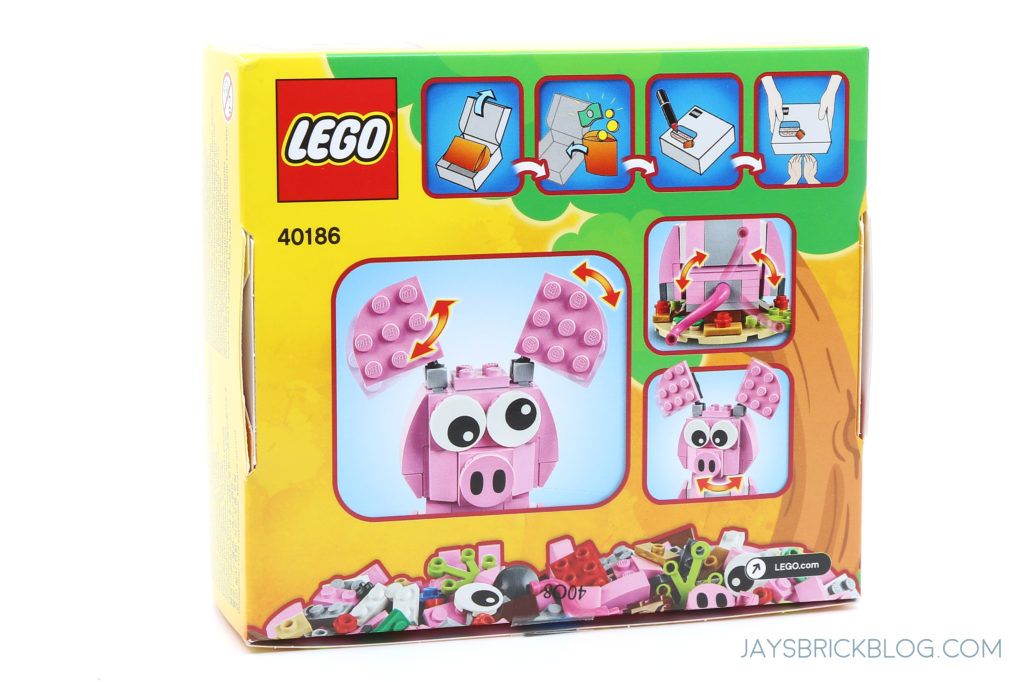 Here’s a look at the back, which shows off the different ways you can articulate the model.

At the top is a four panel comic illustration, which gives you instructions on what to do if you’d like to incorporate this into your Chinese New Year tradition. 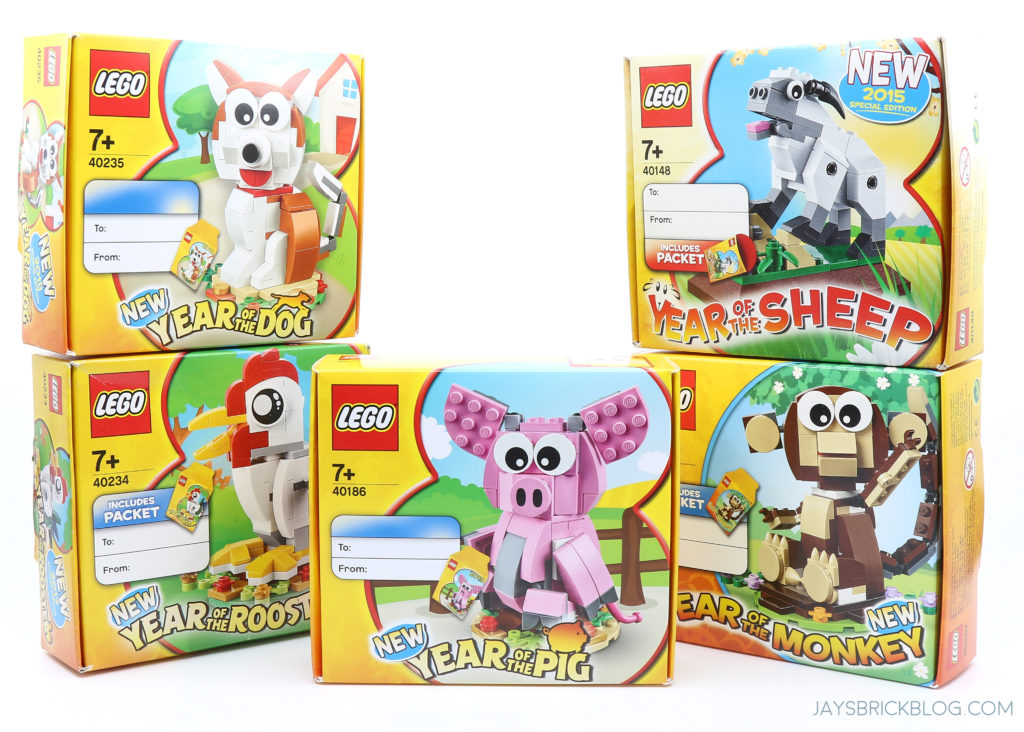 Here’s a look at the boxes of all 5 LEGO Chinese Zodiac Animal sets so far. 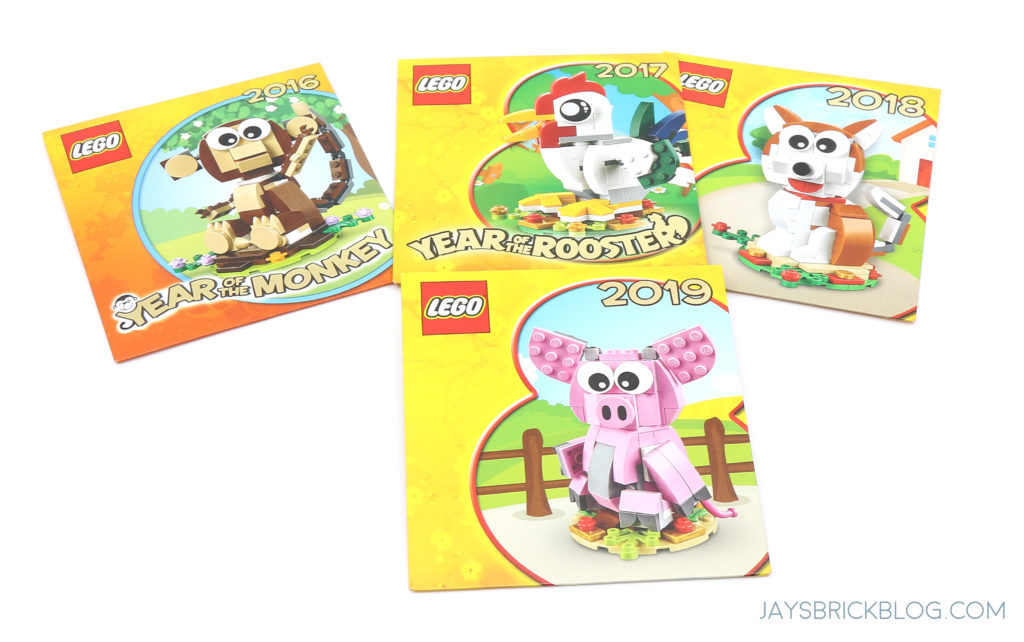 In the spirit of Chinese New Year, the set also includes a commemorative Red Envelope or Hongbao.

For those that are unaware, Red Packets are handed out by married couples to unmarried individuals (mostly kids, but you can technically get them as adults) during the Chinese New Year.

These red packets contain money and are given as a gesture of prosperity and blessing.

As a kid growing up, I’d eagerly await Chinese New Year as you get a pretty significant amount of money which you could either spend or save, depending on how strict your parents were! 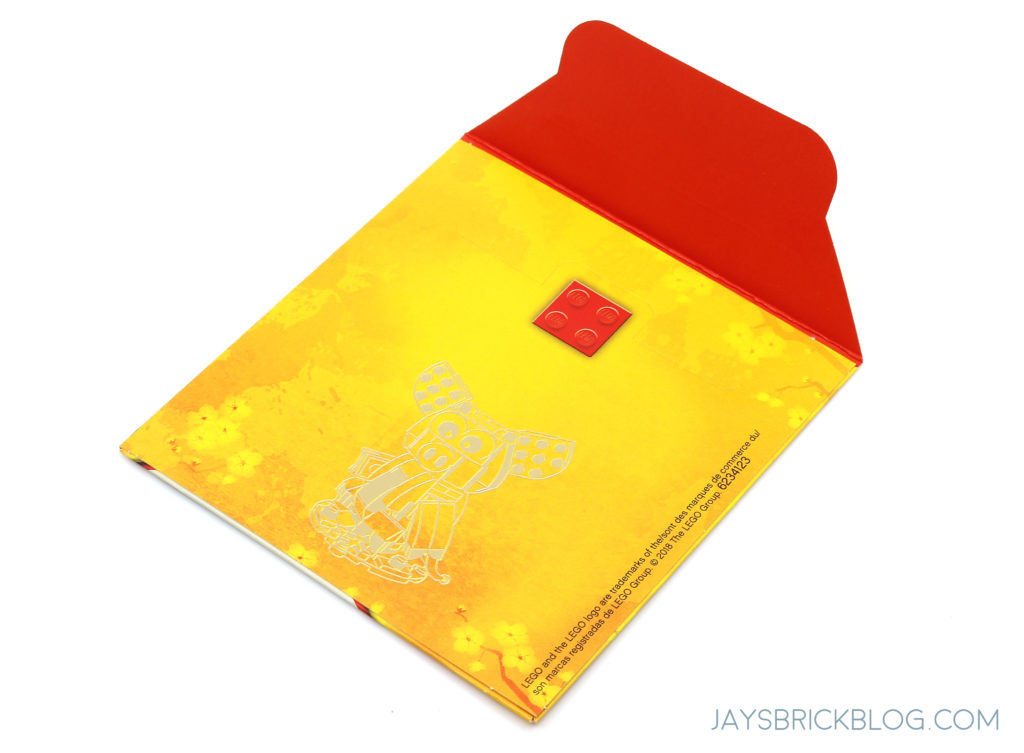 Here’s a look at the back, where you can see the envelope opening up to insert money into.

There’s also a golden embossed imprint of the Year of the Pig set, which looks great and makes it look extra fancy. 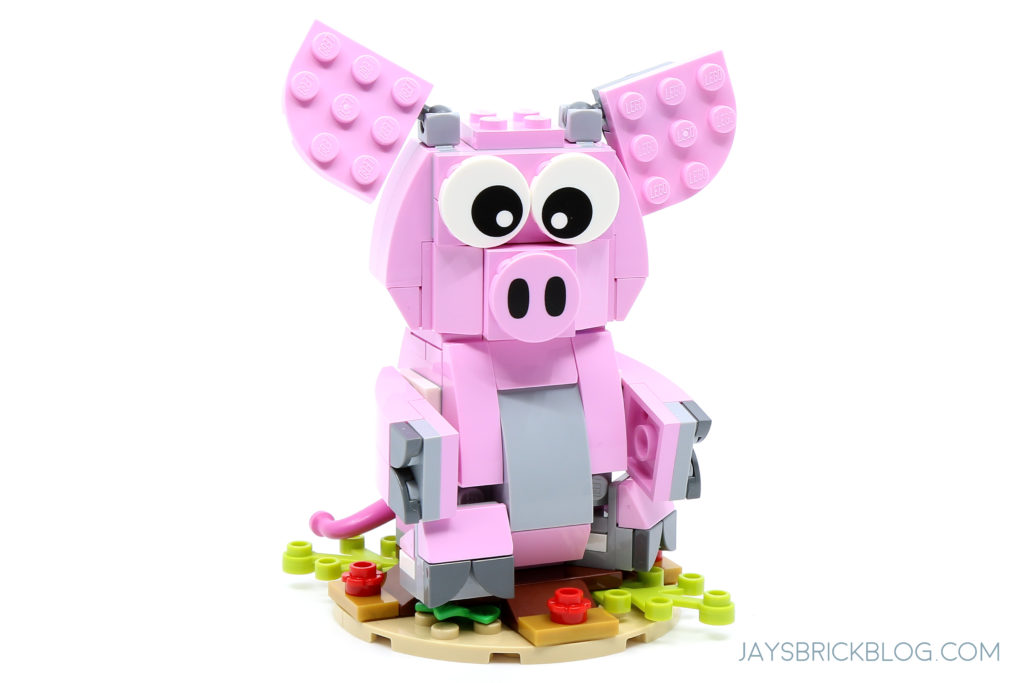 Here’s the completed model. Like previous years, the design identity remains mostly the same as you get a cartoonish take on the year’s Zodiac Animal.

The Pig is quite possibly the cutest animal in the Chinese Zodiac, and the designers have done a great job bringing it to life.

The Pig is seated atop a small base, which has some decorative flowers and foliage on it – making it look almost like a statuette. 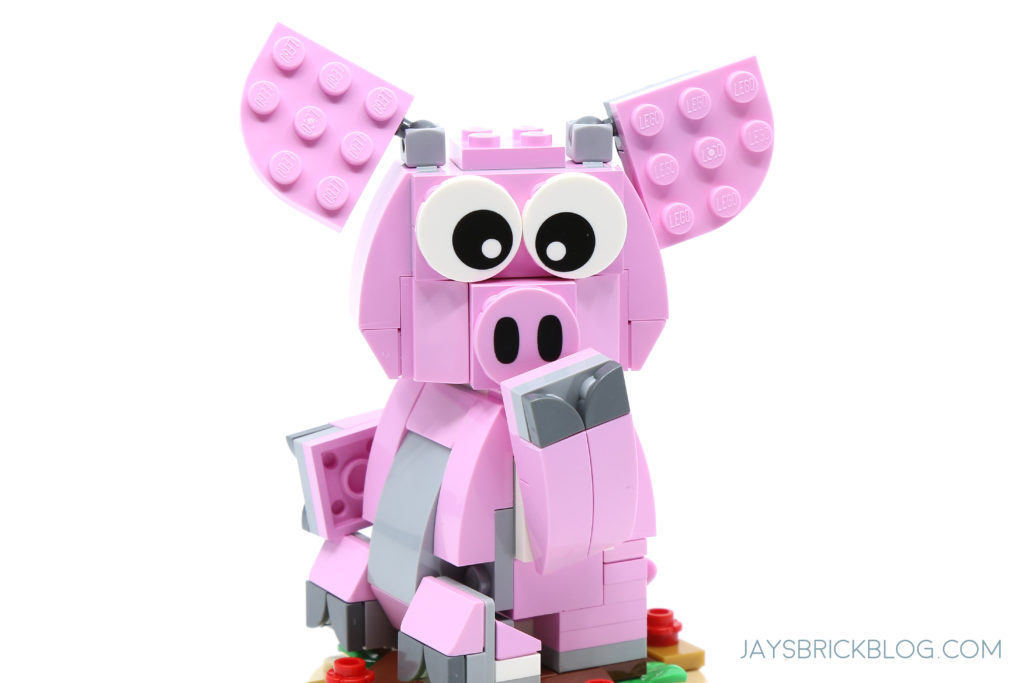 One of the great things about these models is the level of articulation that the designers pack in.

The head swivels around on a turntable, the arms can swivel forwards and backwards, and the ears can also be positioned in different angles.

I have to say, the head spinning on the Pig is really smooth, and exceedingly satisfying. 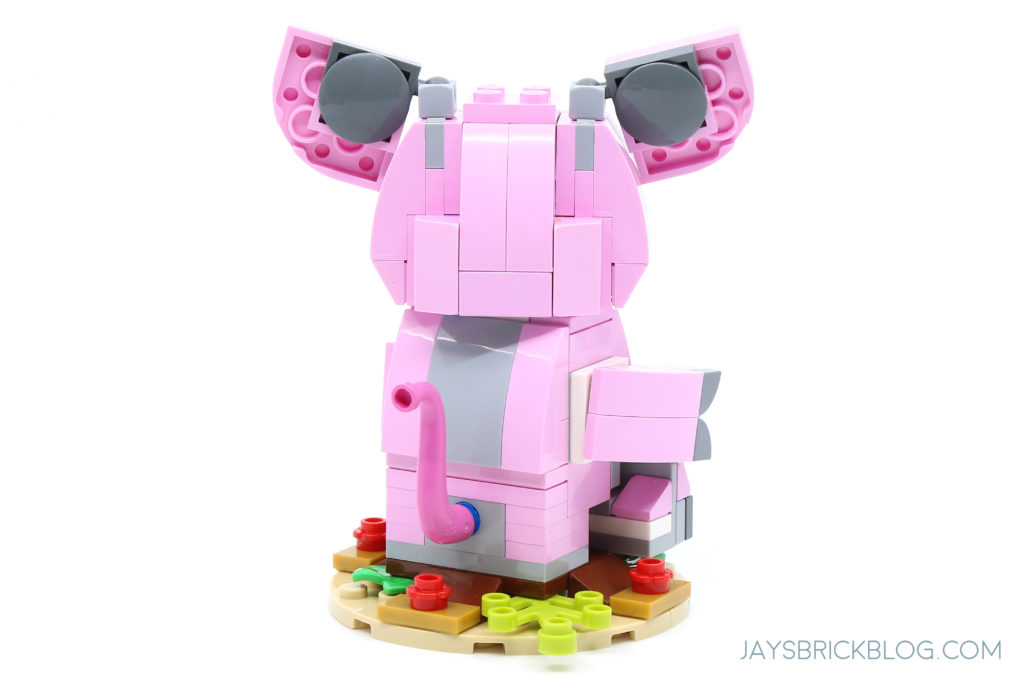 Here’s a look at the Pig from behind. He has a curly pink tail which can also be rotated around – it cleverly recycles a pink tentacle from the Abilisk from the Milano vs Abilisk Guardians of the Galaxy 2 set.

Here’s a look at all the LEGO Chinese New Year Zodiac Animals released so far!

The series started in 2015 with the Sheep, followed by the Monkey, Rooster, Dog and now the Pig.

The Pig’s bright pink colour really makes it stand out from the rest of the animals, although I don’t think it beats the Year of the Sheep as it’s definitely the oddest looking one of the bunch.

Pigs are universally accepted as cute (and tasty) animals, so I’m glad it translated well into this form.

It’s also a great move from LEGO ensuring that there would be enough of these sets to go around, as most people have not had trouble securing them this time around, especially given its wider availability in the US, UK and beyond.

Final thoughts: As a promo set within a long-running theme that has a defined look and feel, the Pig hits all the right spots for me.

It’s a fun, cute and memorable build that goes well with all the other LEGO Chinese Zodiac Animals released so far, with some neat little additions such as the printed pig’s nose-piece which was a great touch.

If you’ve been a long-time collector of these Chinese Zodiac Animals, or even if you’re new to them, you’ll most likely enjoy the Pig and more importantly, hopefully gain a greater appreciation for Chinese culture – which sets like this do a great job of accomplishing.

One of the things that I like about these models is that you even if you missed out on the previous year’s model, they are actually very easy to re-create as they use simple parts and no exclusive elements.

The pig might be a little tricky as he has a printed nose-piece, but hopefully it’ll be easily accessibly for future LEGO fans.

As a seasonal Chinese New Year set, the Year of the Pig is a lot of fun, and and possibly the best thing about this is how easy LEGO has made it to obtain it – unlike the other *cough* exclusive sets this year.

Thanks for reading! Hope you enjoyed this short review! Let me know in the comments if you were able to get your hands on one and what you think of the LEGO Chinese Zodiac Animal theme!

Do you see yourself committing 12 years to collecting all the animals?

Don’t forget, you can find many more reviews in the Jay’s Brick Blog Review Hub!