This year, LEGO has wisely given its new(ish) Brickheadz theme the Seasonal treatment, rolling out 6 different Seasonal Brickheadz sets throughout the year. It’s a fun change from last year’s minifigure-centric vignettes and I think an excellent way to inject some relevance into the somewhat boring Brickheadz theme.

To start this year’s series of Seasonal Brickheadz, here’s a short review of 40270 Valentine’s Bee! If you’ve been reading the blog for awhile, you’ll know my general dislike of Brickheadz. It started well in my first review of the Marvel Brickheadz where I was quite open to the theme, but following a series of questionable decisions by LEGO to place most of the (desirable) Brickheadz as Comic Con exclusives, rendering most of the Brickheadz released so far unobtainable for the rest of us.

That said, I do like that these are the first non-licensed Brickheadz, which is a nice way to switch things up from the Super Heroes-dominated lineup of Brickheadz. 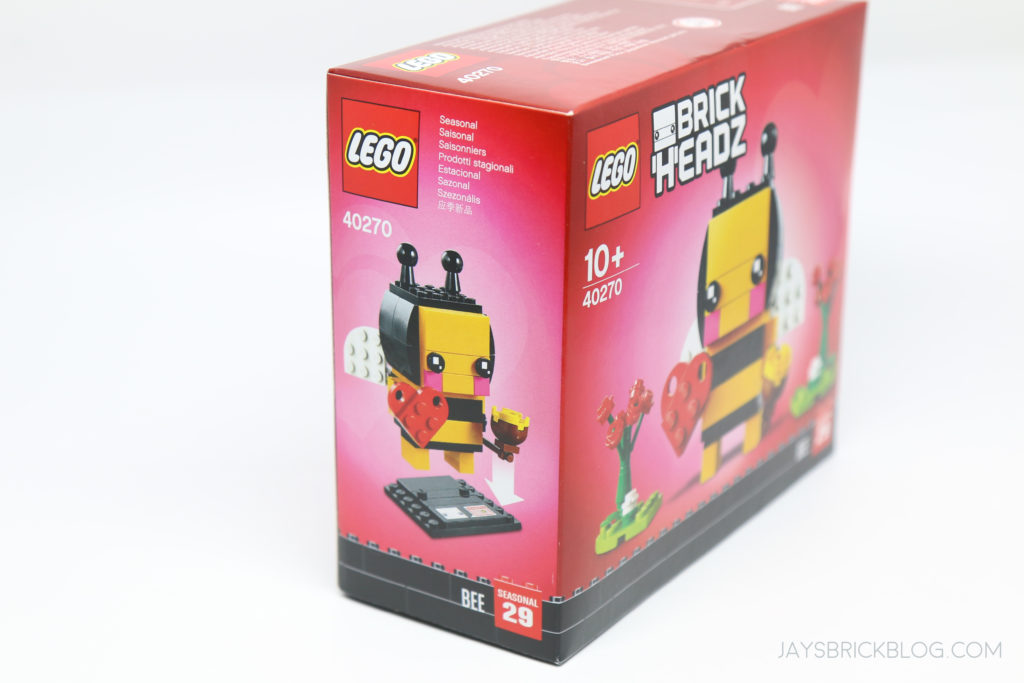 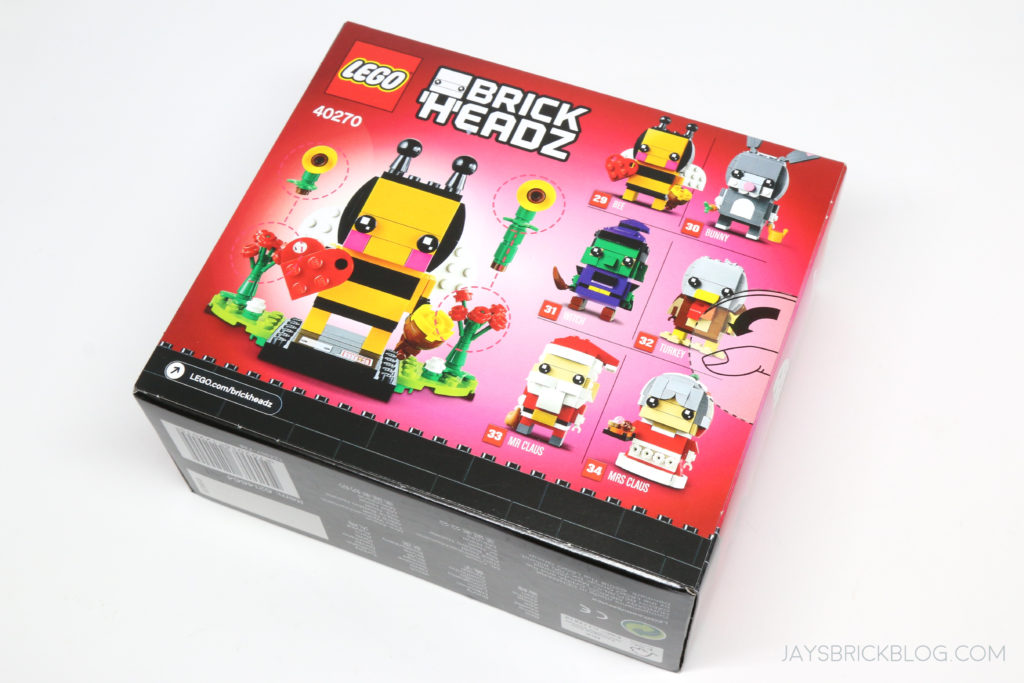 Here’s a look at the box, which features some neat art of the Valentine’s Bee, as well as teasers of this year’s upcoming Seasonal Brickheadz, which includes an Easter Bunny for Easter, Witch for Halloween, a Turkey for Thanksgiving and Mr and Mrs Claus for Christmas. 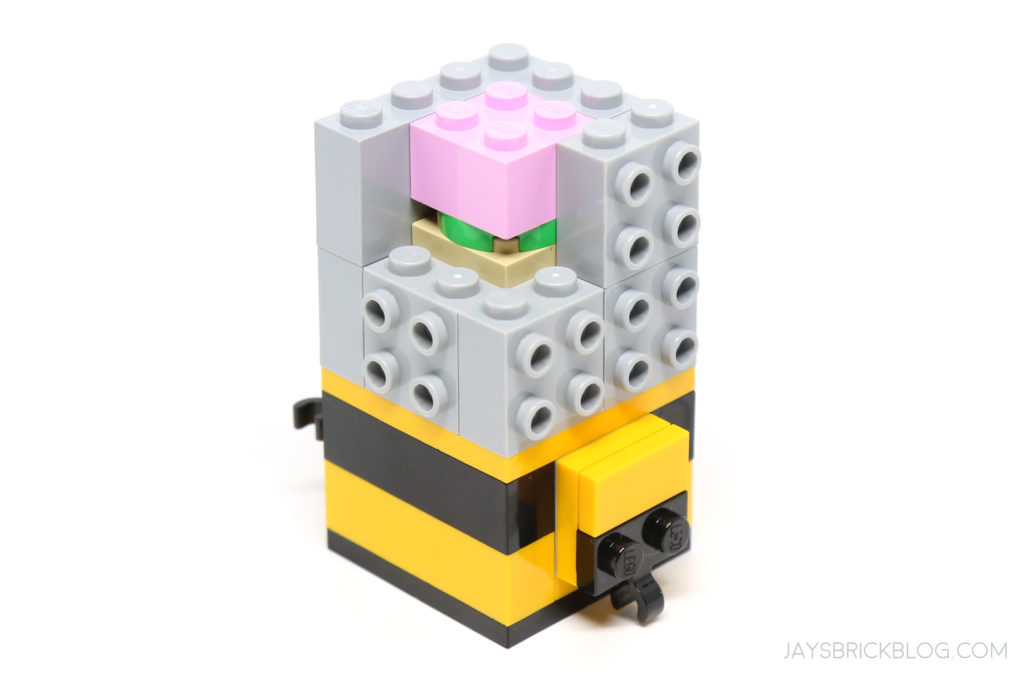 The build process is fairly generic and should feel familiar if you’ve built a Brickheadz before. You basically assemble the “core” of the Brickheadz and then snap on tiles, and curved slopes on the exterior to complete the look.

No matter how many Brickheadz I build, I’ll always be tickled by the pink “brain” hidden inside the head section. 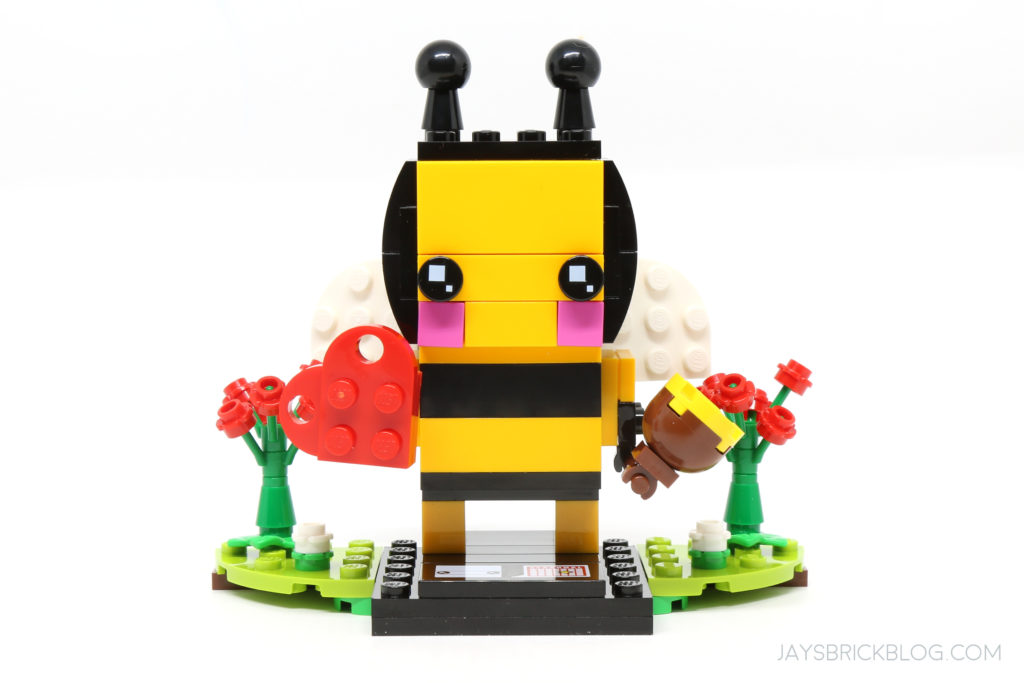 Here’s the completed Valentine’s Bee Brickheadz. It overwhelmingly succeeds in being really cute, thanks to the beady Brickheadz eyes as well as the blushed pink cheeks which makes the bee look like he or she is slightly embarrassed or shy when presenting a Valentine’s Gift.

I also really like the Bee’s antennae atop his head.

Instead of the typical 5 x 5 Brickheadz baseplate, we also get some additional details that flank baseplate, which features a vase of roses to suit Valentine’s Day. 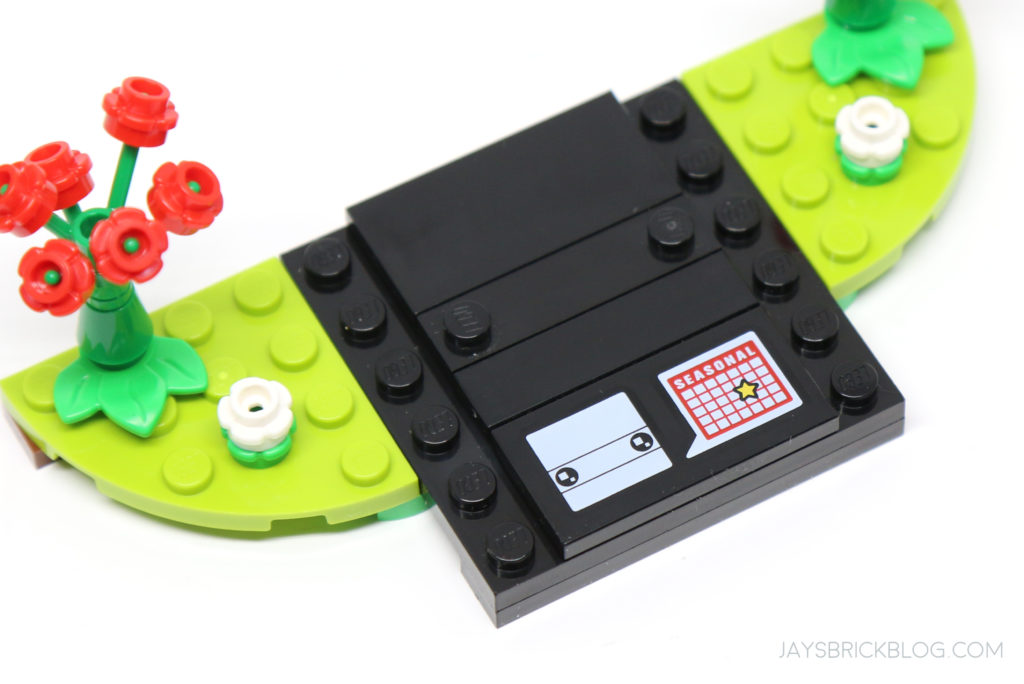 Speaking of baseplates, the seasonal Brickheadz all come with their very own exclusive printed tiles, which has the blank Brickheadz logo next to a Seasonal Calendar icon. A nice touch to set it apart from other Brickheadz. 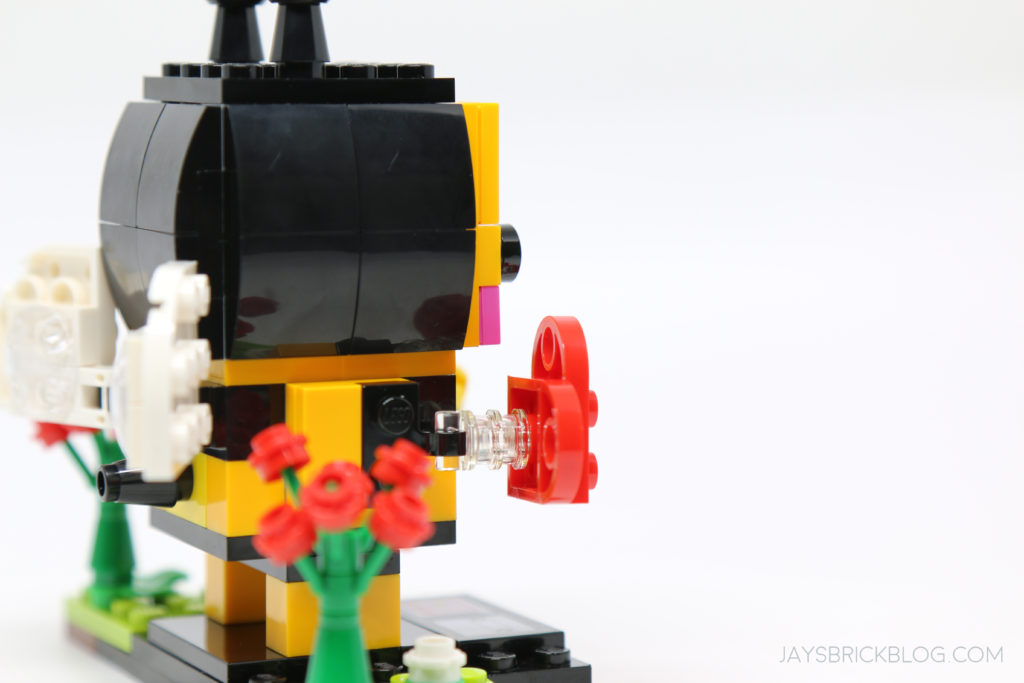 For accessories, the Bee has a love heart, which is cleverly held by the Bee’s claw hands. 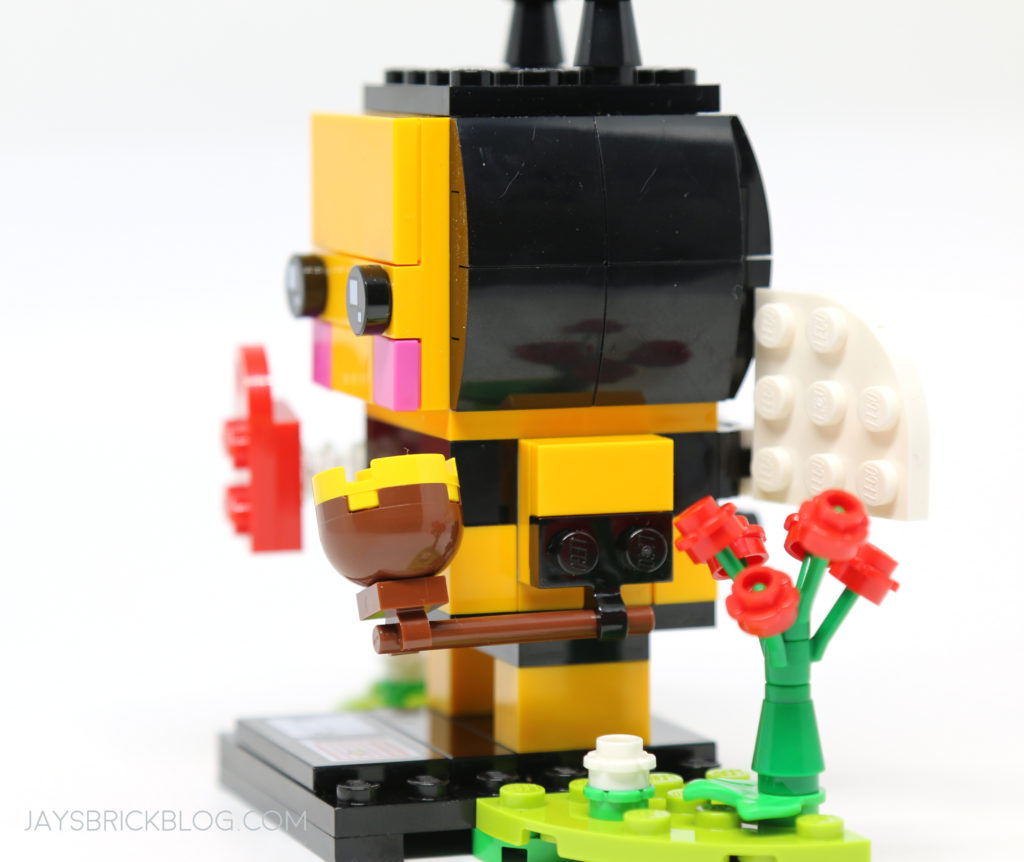 He also has a pot of honey that’s balanced on the stick. I’m not the brightest person, so it took me a while to realise that the yellow round plate fastened over the brown bowlpiece is meant to signify honey, spilling over a bowl. 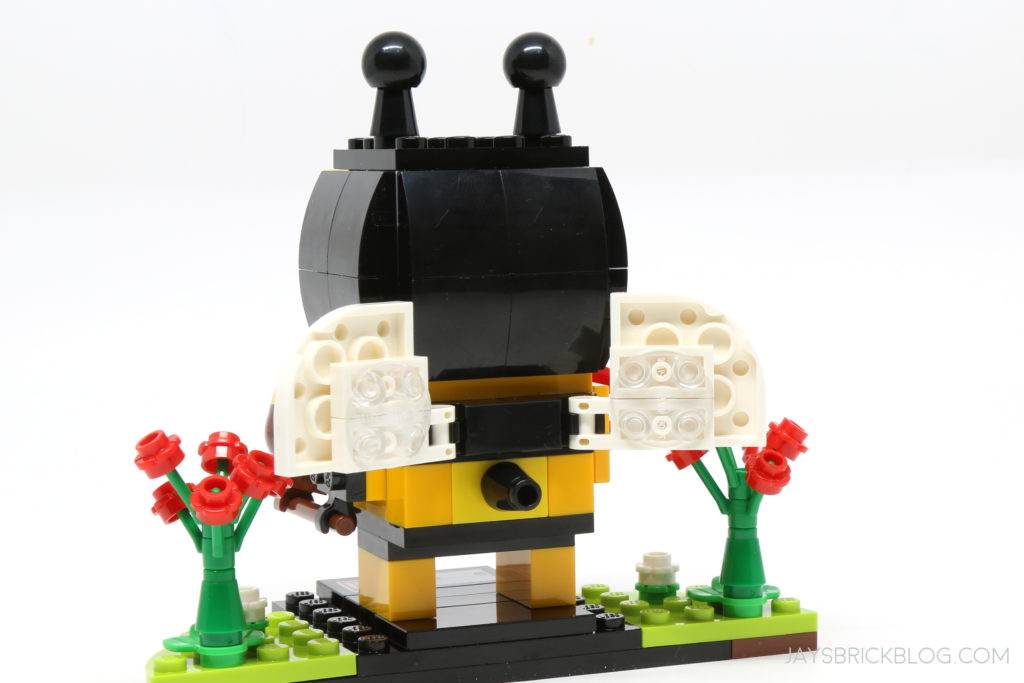 From behind, you can see the Valentine’s Bee’s wings, which can swivel slightly, as well as a black cone piece for its stinger which is equally cute. 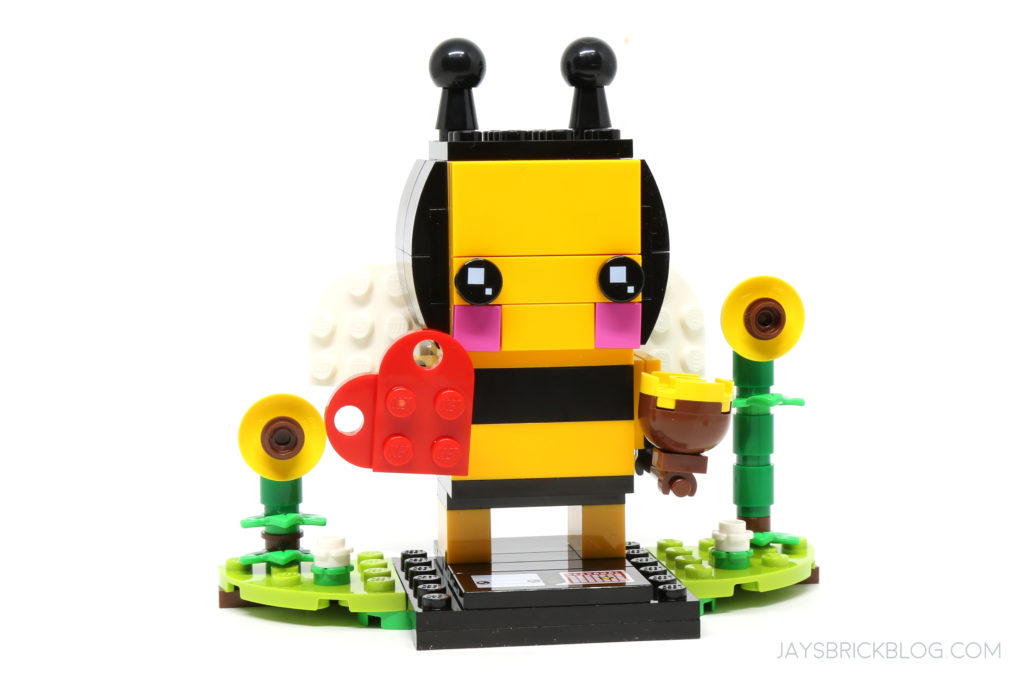 There’s also another neat feature, where you can swap out the bunches of roses for sunflowers for some variety. It’s a really neat way to change up the display, making it relevant for display outside of Valentine’s Day and the yellow sunflowers also seem more thematically coherent with the Bee. 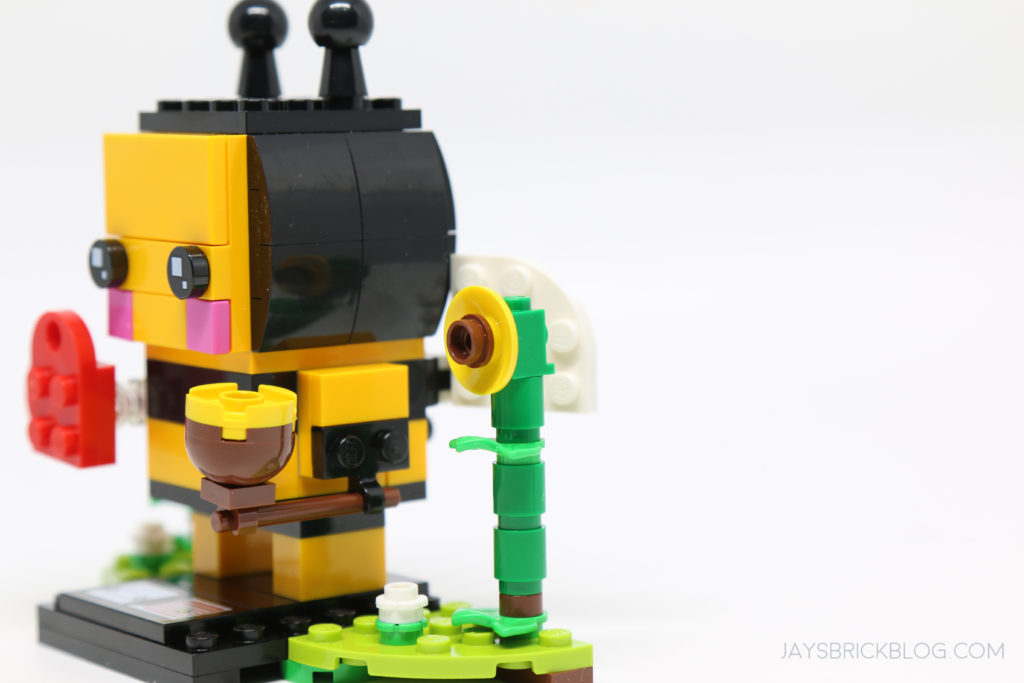 Here’s a closer look at the sunflower stalks, which are simple yet aesthetically pleasing flowers. 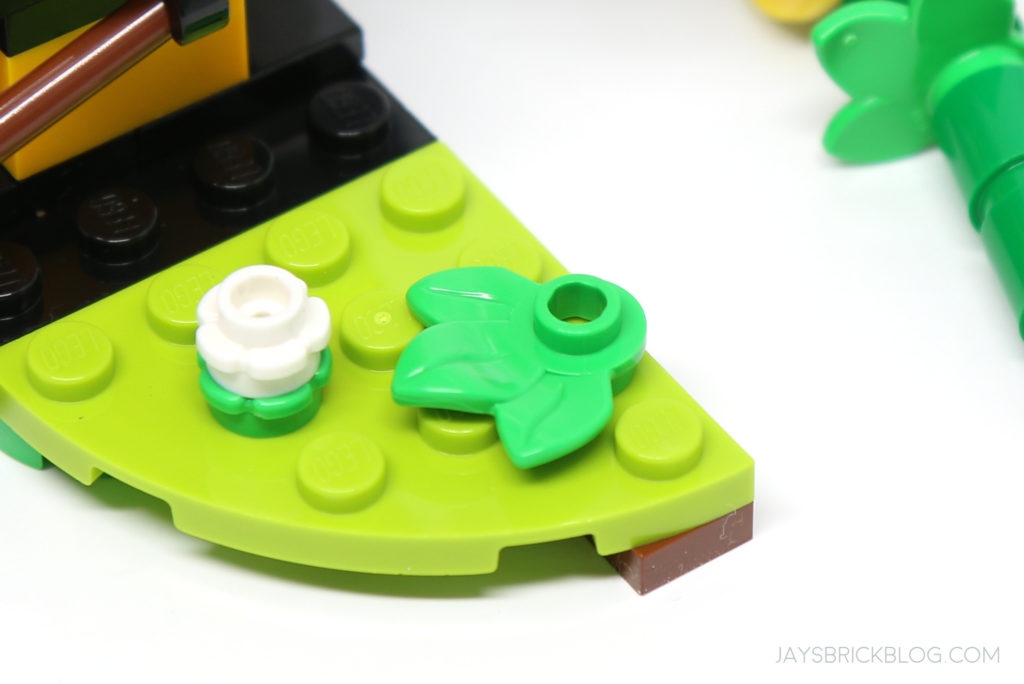 I’m also really happy that we get these new leaf pieces, 4 of them to be exact, which is a really neat touch as they’re really good looking and exciting new accessories for 2018. 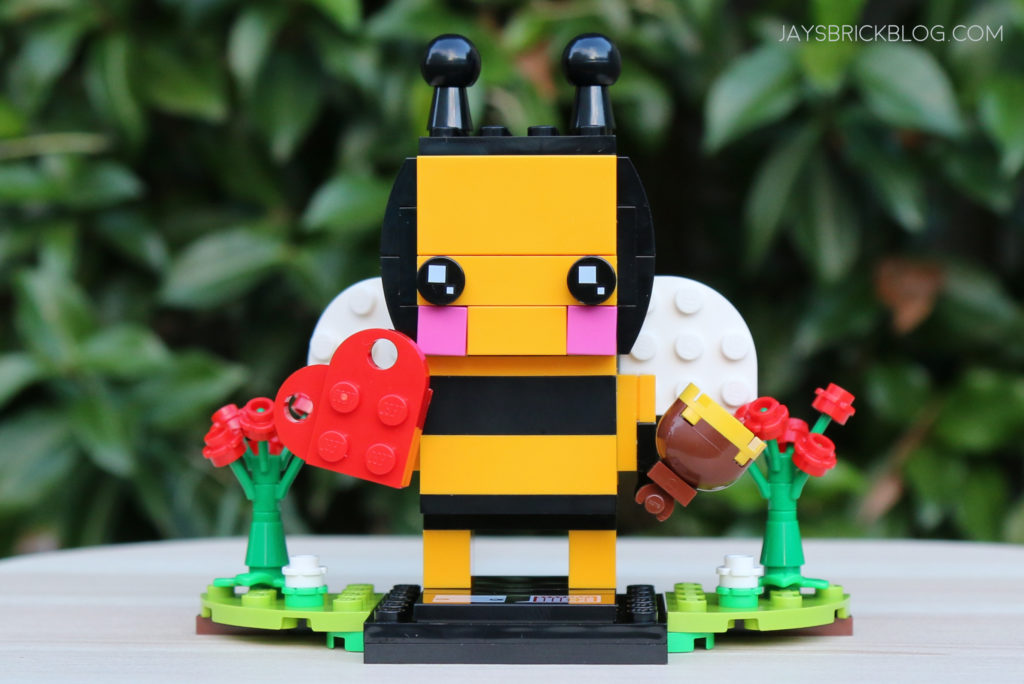 Final thoughts: I’m a fan of the Valentine’s Bee and Seasonal Brickheadz sub-theme in general and this may have just re-ignited my interest in the theme. I find the concept refreshing, and I also do like the callback to Series 10’s Bumblebee Girl, which I’m guessing is what inspired this particular design.

It’s quite possibly one of the cutest Brickheadz released so far and a more than worthy Seasonal set that brings something completely new and fresh to the table.

Whether you’re a fan of Brickheadz or not, I highly recommend picking this one up. I haven’t been this excited about Seasonal sets since the very first Valentine’s Day vignette. These make great gifts, are easy to build and are great as display pieces.

Thanks for reading this review, I hope you enjoyed it! It’s a short one but I’m glad to be able to complete it with 10 minutes left of Valentine’s Day. I’ll try to be a lot more prompt with the Easter Brickheadz review.

Let me know what you think of Brickheadz as this year’s seasonal theme, and if you like the designs revealed so far! Will you be collecting all 6 Seasonal Brickheadz? I know I will! 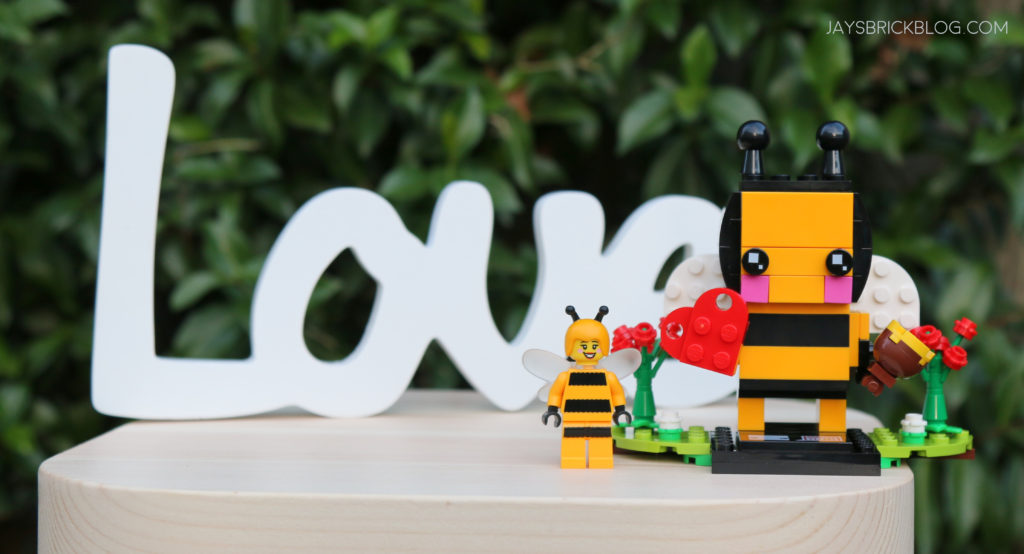 I’ll leave you with this photo of the Valentine’s Bee and Series 10’s Bumblebee Girl! Hope you had an awesome Valentine’s Day!