My adoration for the LEGO Friends theme is widely documented  and I’ve never been put off by the overtly girly theme. In all honesty, I think the entire debate and divine between toys targeted towards boys or girls is silly business; after all, I’m an adult man who enjoys playing with toys targeted at children half my age.

One of the themes I was most excited about this year is Disney’s Princess line, an extension of LEGO’s tremendously successful Friends theme into fairy tale Disney land. Iconic Disney Princesses from their immense library of animated films make their debut in LEGO in the form of Friends minidolls, which I think is an awesome move from LEGO to tighten their grip on the girl toy market.

Let’s see if the smallest set in the theme, Ariel’s Amazing Treasures contains real riches or if it flounders (heh) underwater. 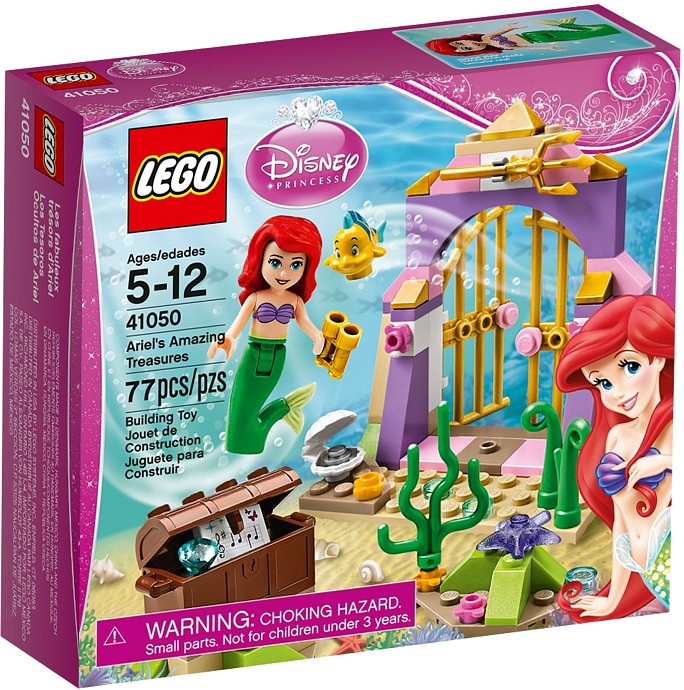 It’s hard to believe that I’m almost as old as Disney’s The Little Mermaid. It’s a classic in every sense of the word, with songs that I still know the words to and animation that has withstood the stand of time. With a bright underwater world, colourful characters and a soundtrack that almost everyone is familiar with, you can’t go wrong with The Little Mermaid as one of Disney’s first LEGO princesses. 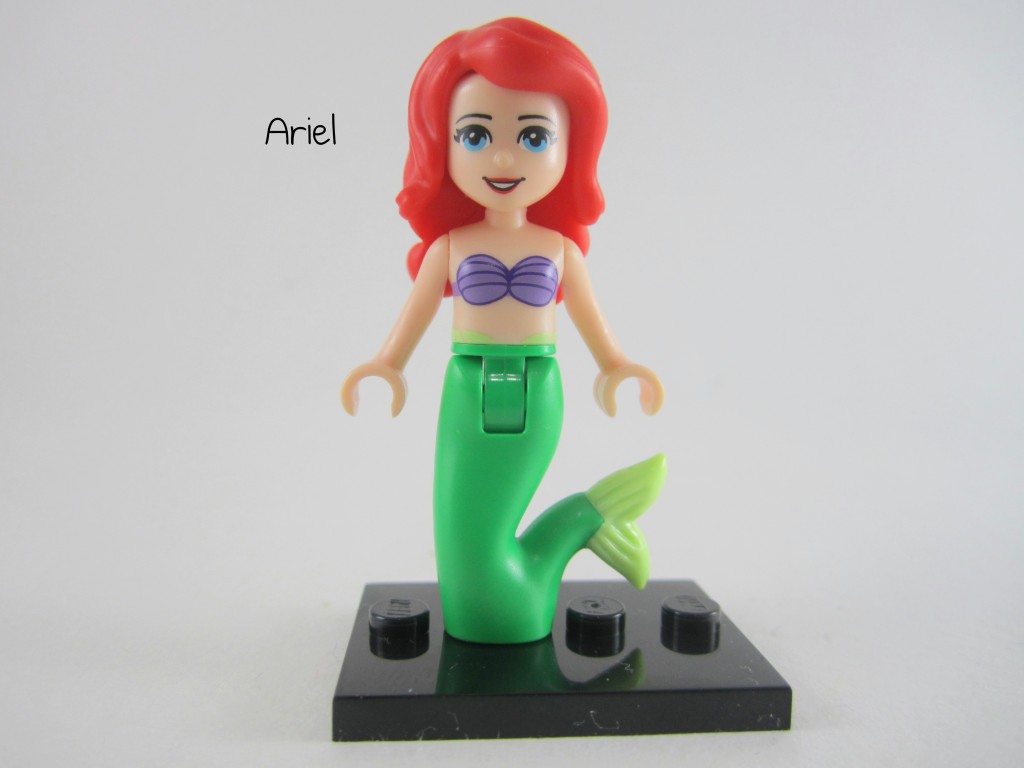 First up is rebellious daughter of Neptune, Ariel herself in minidoll/miniprincess form. The whole minifigure looks fantastic thanks to the contrast between her bright red locks and green tail. Her hair-piece is hands down a remarkable accessory and is quite possibly one of the reddest LEGO piece I’ve ever seen. Instead of legs, we’re treated to a fishy lower half which bends forward and is a neat piece of plastic. Hard to imagine this being useful in any other non-mermaid scenarios but I’m still happy LEGO gave us this piece instead of modified legs. There’s a tiny hole at the bottom which allows Ariel to fasten herself to a single stud. 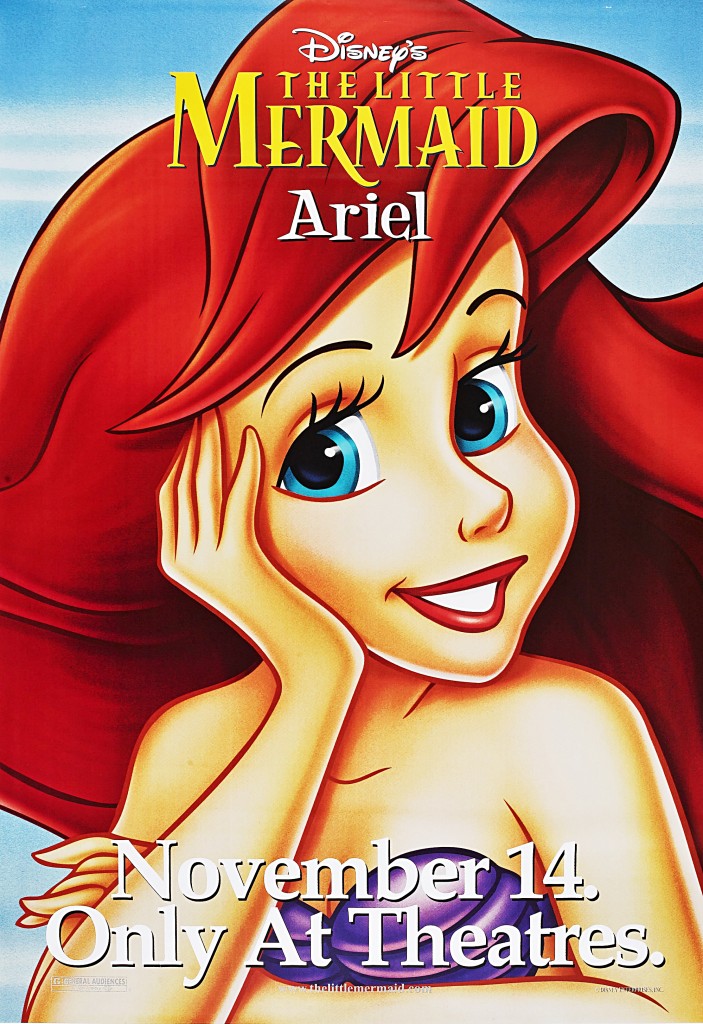 The only thing that felt off about the minidoll is Ariel’s face printing which looks nothing like how she looks like in the movie. It’s really just her makeup that looks really odd, specifically the two “eyeliner tails” that looks out of place. Unless Atlantis has really good underwater makeup brands, I fail to see how these would stay on under the sea. 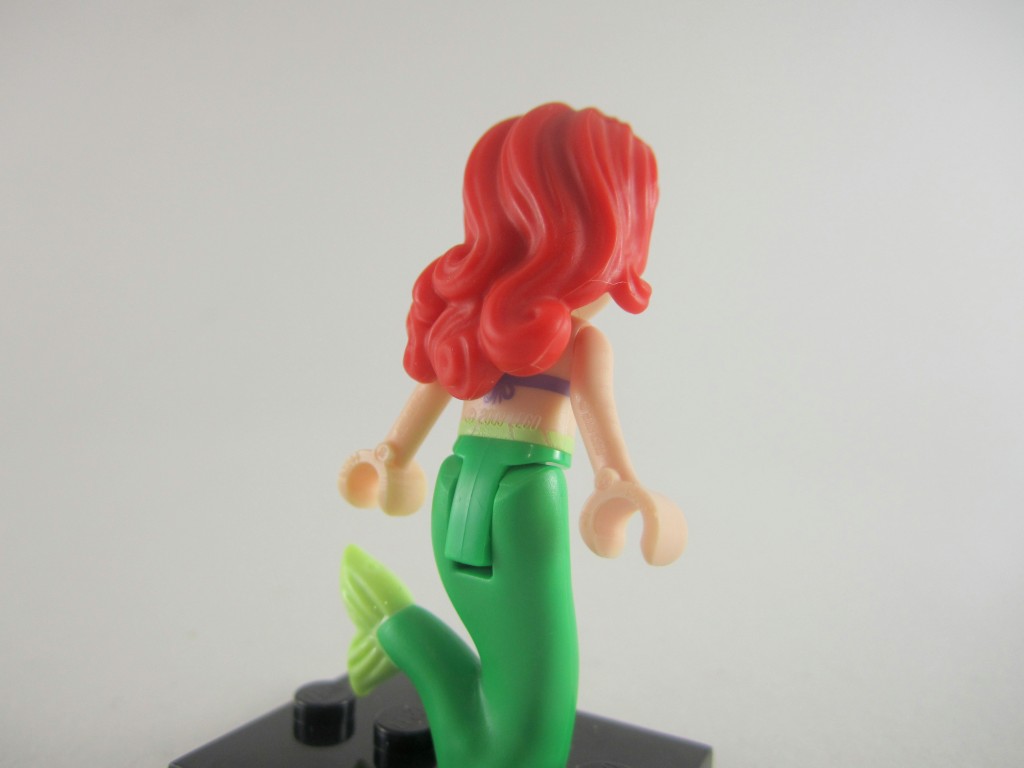 Have I mentioned how majestic her hairpiece looks like? Check it out from the back and you’ll notice the beautiful curls and contours of the piece. Like most Friends minidolls, Ariel’s hairpiece is made out of squishy plastic but it doesn’t detract from it at all. She has some back printing in the form of her seashell bikini straps. You’ll also notice some blotchy green marks near the place the tail connects to Ariel’s torso.  It’s meant to look like the scales of the tail extend to the torso but it just comes off as a sloppy printing mistake. At least that’s what I thought when I first spotted it. I also found it peculiar that there’s a 2009 LEGO copyright stamped on the small of her back. It kinda looks like a tramp stamp, but it’s also interesting that we’re only getting these in 2014, half a decade later. Makes me wonder about what else could lie in LEGO’s vault biding its time till they get an official release. 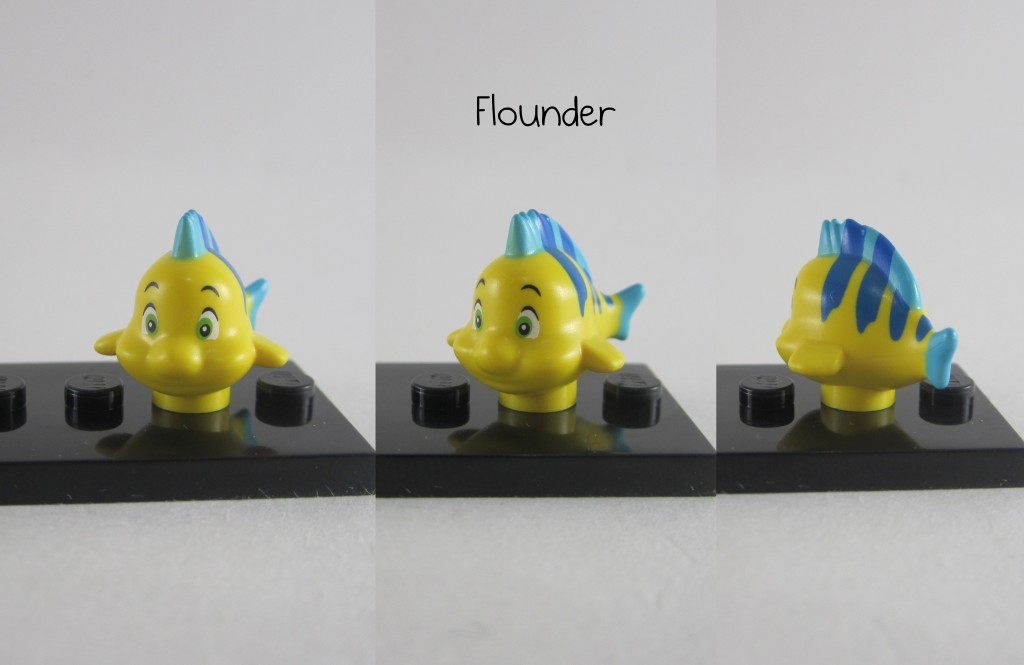 Another nice surprise is the addition of Flounder, which is moulded to absolute perfection. He looks exactly like he does in The Little Mermaid and boasts a gorgeous and crisp paint job. Like the assortment of critters and cute little animals found in the Friends theme, Flounder occupies a single stud and is slightly elevated from the ground, creating the illusion that he’s swimming. 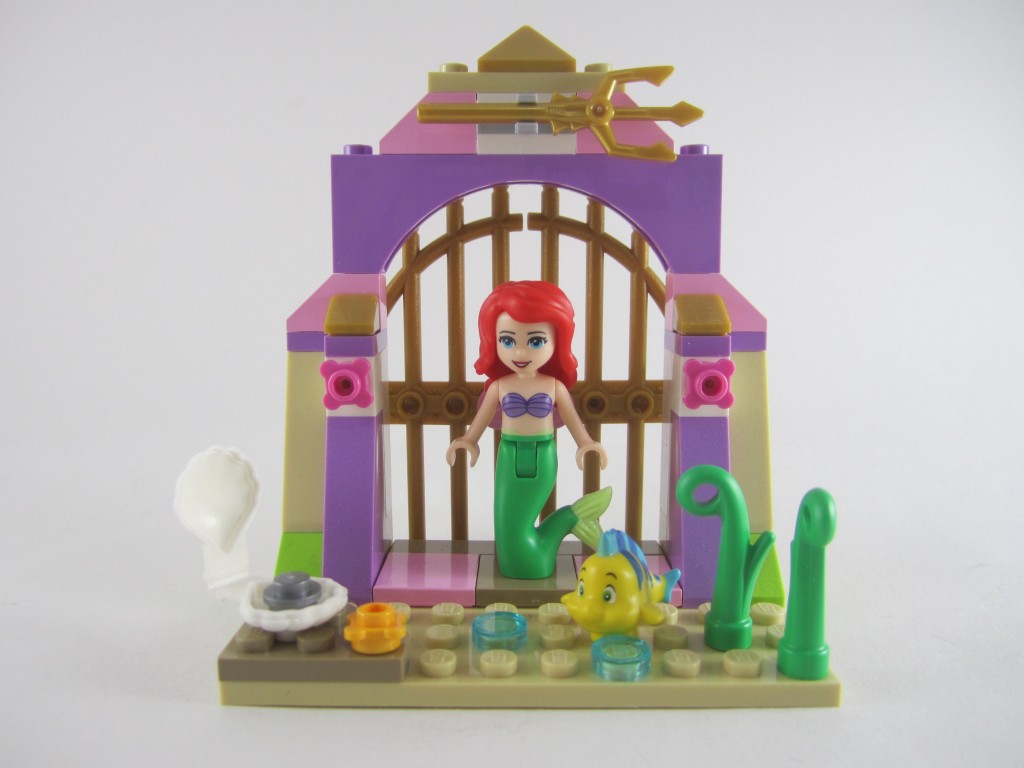 Being the smallest set in the Princess theme doesn’t stop it from containing a ton of value. We get a colourful gateway built on a 6×10 plate using a pleasing combination of tan, pearl gold, white, lime green, purple and pink bricks. Very happy that the Princess theme continues the Friends tradition of using these pastel coloured parts and including a ton of interesting elements such as a clam, pearl gold gates and foliage.

Unlike most small sets, the gateway doesn’t feel like an afterthought and is quite well designed. It’s compact and serves its purpose, opening the gates. I’m trying to figure how this gateway fits into Ariel’s world. It doesn’t look manmade and the presence of a gold trident on top of the gates has led me to the conclusion that this is one of Neptune’s gates or gardens. There’s also a convenient platform where Ariel can comfortably stand in the middle of the gates, thanks to a single-studded tile. 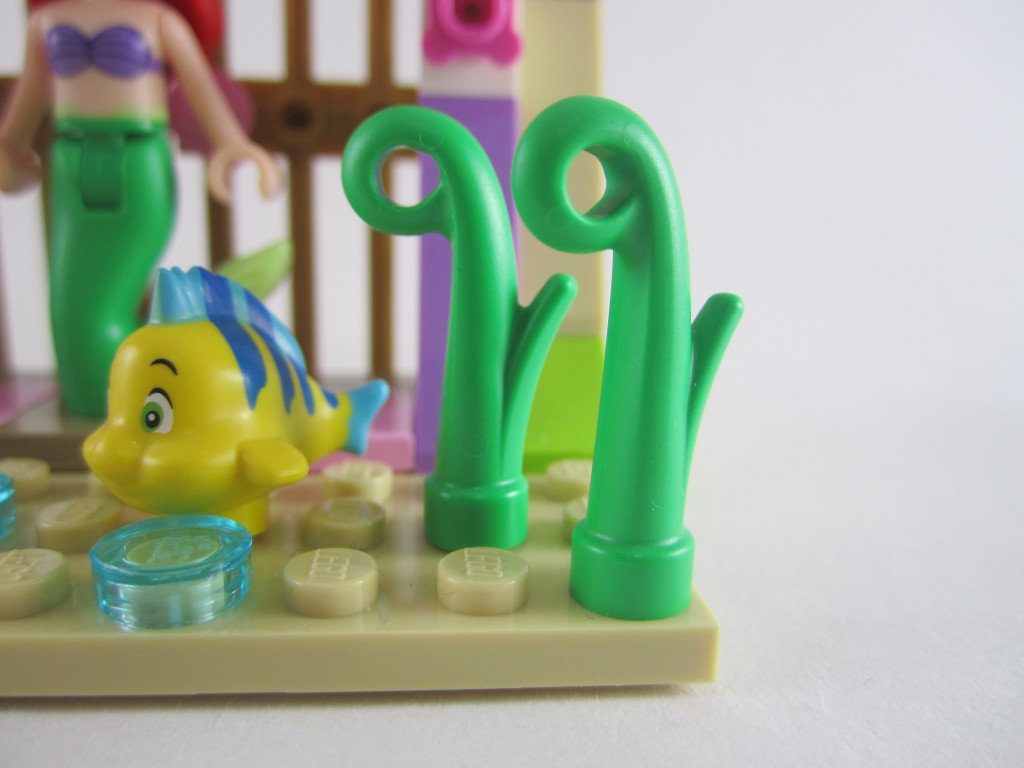 We get these really cool plant tube thingies which just started appearing in sets this year. One can never have enough LEGO foliage and it’s always a good thing to obtain desirable parts in small sets.

To supplement the gateway, we get two separate “coral” builds, one which contains more foliage pieces and a treasure chest. On the left, we’re treated to a pretty cool glittery transparent blue starfish piece and some flower stud-pieces to simulate the look of coral. In the treasure chest, we find some of Ariel’s Amazing Treasures which is also perched on a piece of coral. I can never say no to more lime green slopes – the colours are absolutely wonderful. 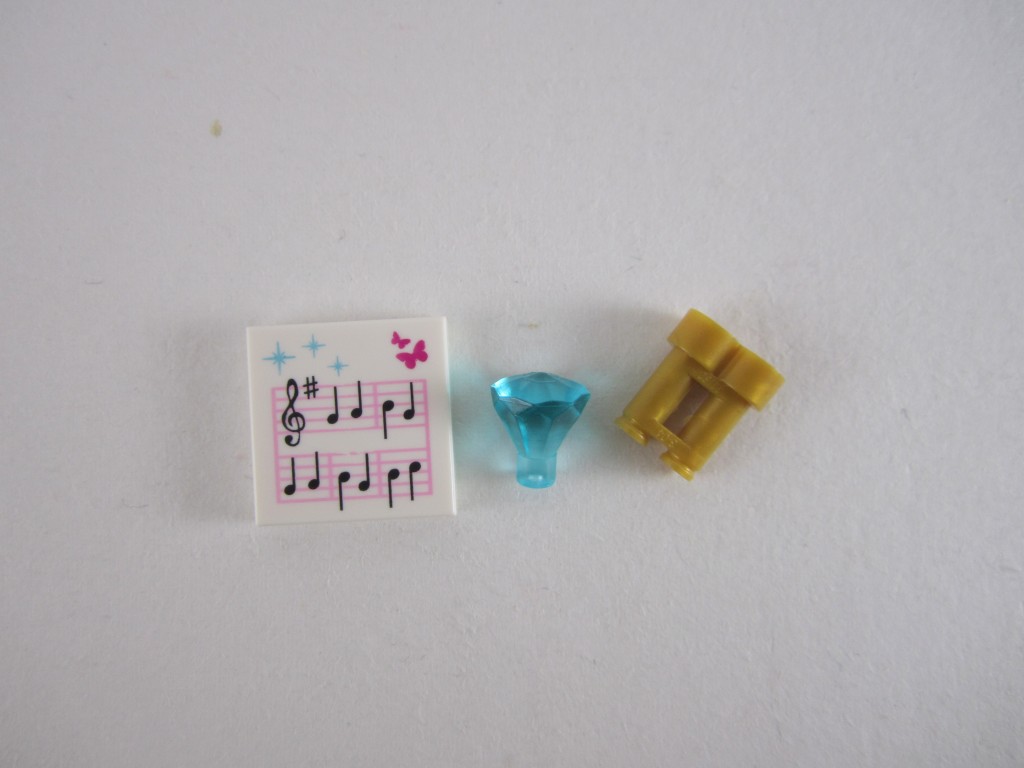 Within the treasure chest, we find a sheet music tile, a blue jewel and a pair of pearl gold binoculars. Ariel has a strange fascination with the human world so it’s not too surprising that she has a stash of human trinkets hidden somewhere in Neptune’s kingdom. The pearl gold binoculars are really nice, which can also be found in Metalbeard’s Duel. I think these are new because I don’t think I’ve seen pearl gold binoculars in other LEGO sets. 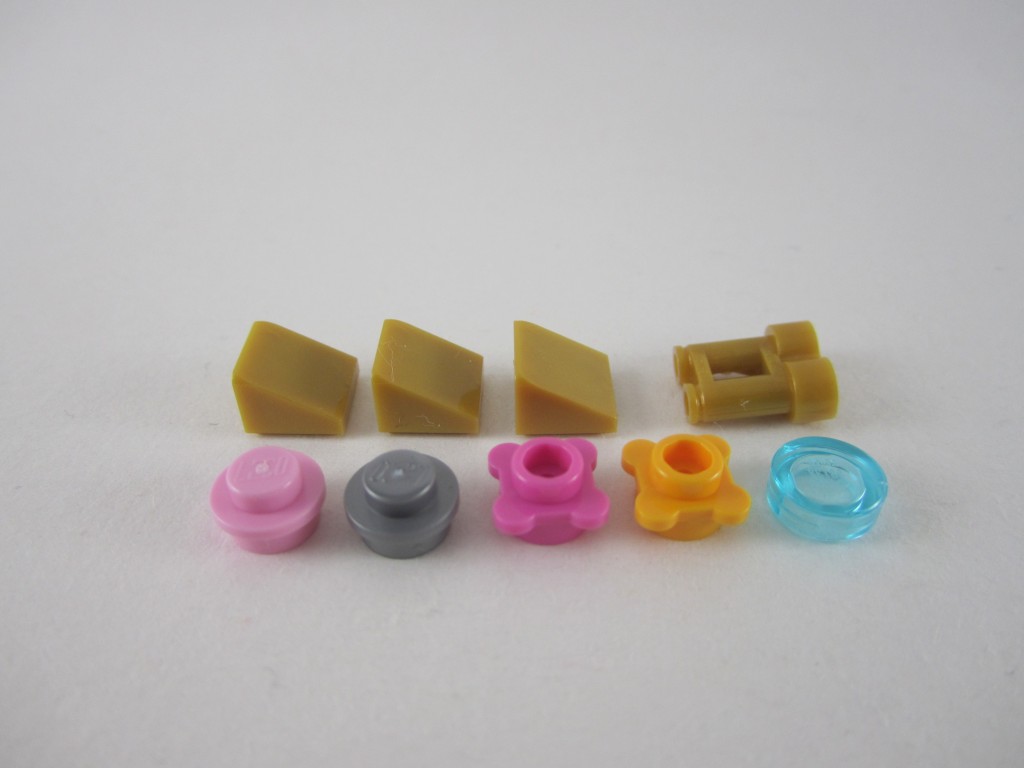 Ariel’s Amazing Treasures also contains some very cool spare parts. Normally, after putting a set together, you’ll always find some leftover parts which consist of extra accessories, tiles, studs and cheese slopes. Even though this is a small set, we get 3 extra pearl gold cheese slopes, an extra pair of binoculars, a transparent round 1×1 tile and some flower pieces in addition to the usual 1×1 round pieces. Not bad at all for a small set. 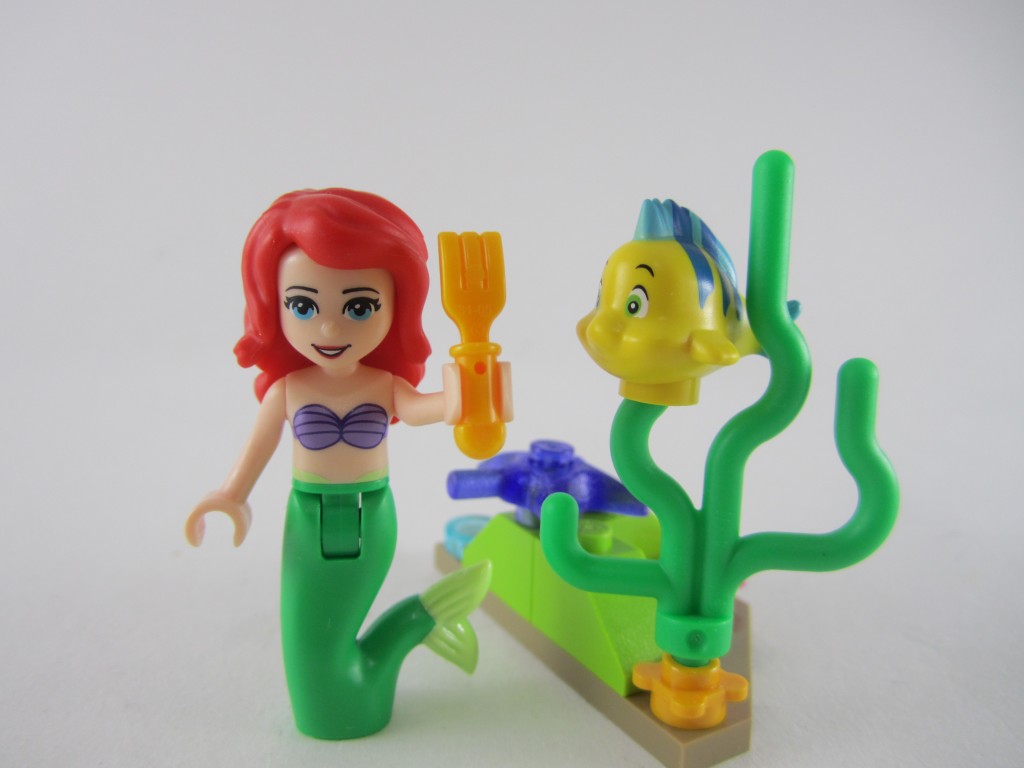 If one thing I can nitpick with this set is that it’s missing an important element, some would say an essential piece of The Little Mermaid: A dinglehopper. It would’ve been a great feeling to pop open the treasure chest to discover a fork, which Ariel obsesses about in the movie. Maybe it’s just me, but the dinglehopper scene is one of the most memorable, second only perhaps to Sebastian’s rendition of Under the Sea. Speaking of everyone’s favourite red lobster, it’s a shame that we don’t get a LEGO version of him. With 2 Little Mermaid sets this round, I think it’s unlikely that we’ll see him in a LEGO set anytime soon, but one can always hope. 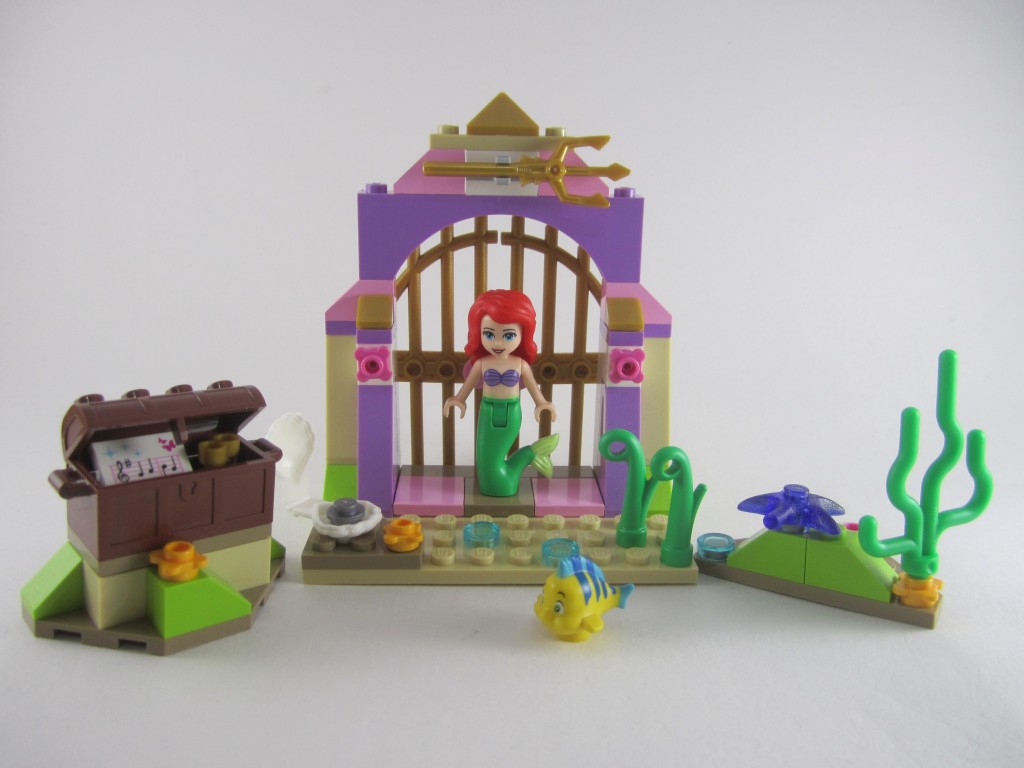 Final Thoughts: Despite being the smallest set in the Disney Princess theme, Ariel’s Amazing Treasures packs a significant amount of value just like its name suggests. Colourful bricks, an iconic character in the form of mermaid-form Ariel and even Flounder make this is must-have set for fans of classic Disney movies. The gate looks great on display, kinda like a mini vignette with Ariel occupying the middle of the set and even when you’re bored of it, you’ll have quite the harvest of interesting elements for your parts collection. Being a small set, it’s quite a no brainer impulse buy if you want something a little unique.