2015 saw the debut of a new Star Wars sub-theme – buildable figures featuring some of the more notable characters from the Star Wars universe. Also known colloquially as “Constraction Figures” (a portmanteau of Construction and Action Figures), the range combines building techniques and parts from LEGO’s popular Bionicle theme with designs and elements from Star Wars in what promises to be an exciting amalgamation of both worlds.

After watching the movie and falling in love with Kylo Ren’s villainous character, I couldn’t wait to get my hands on his buildable figure. When the set began to go on sale here in Australia, I wasted no time in picking one up for my very first Star Wars buildable figure review. Let’s take a closer look at LEGO 75117 Kylo Ren! 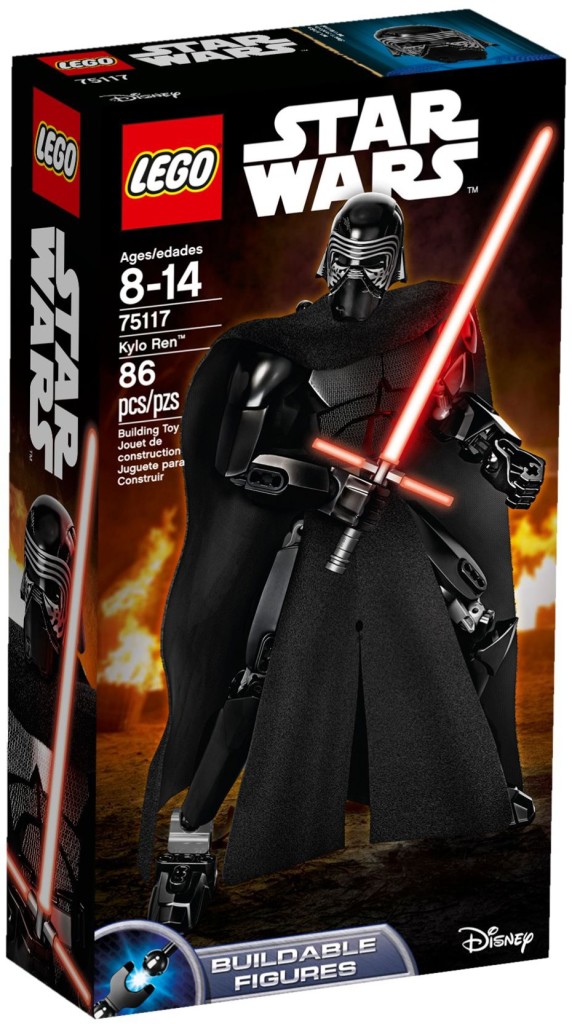 I’ll be honest – when LEGO first unveiled the line of buildable figures I immediately brushed them aside because they “looked nothing like LEGO”. Having no personal attachment to the Bionicle theme also made me extremely apprehensive about these Constraction sets as they just didn’t appeal to me at all. To me, LEGO was all about clicking bricks together.

Eventually, my unfounded prejudices of these sets soon gave away after hearing some of my friends gush about the 75111 Darth Vader buildable figure, so I relented and decided to pick up a few of these Constraction sets. I have Darth Vader and 75112 General Grievous unbuilt but decided to give Kylo Ren a go since his character was trending and all that because of The Force Awakens.

Turns out, I really like the concept of the buildable figures and Kylo Ren was an excellent introduction to this unique LEGO theme. 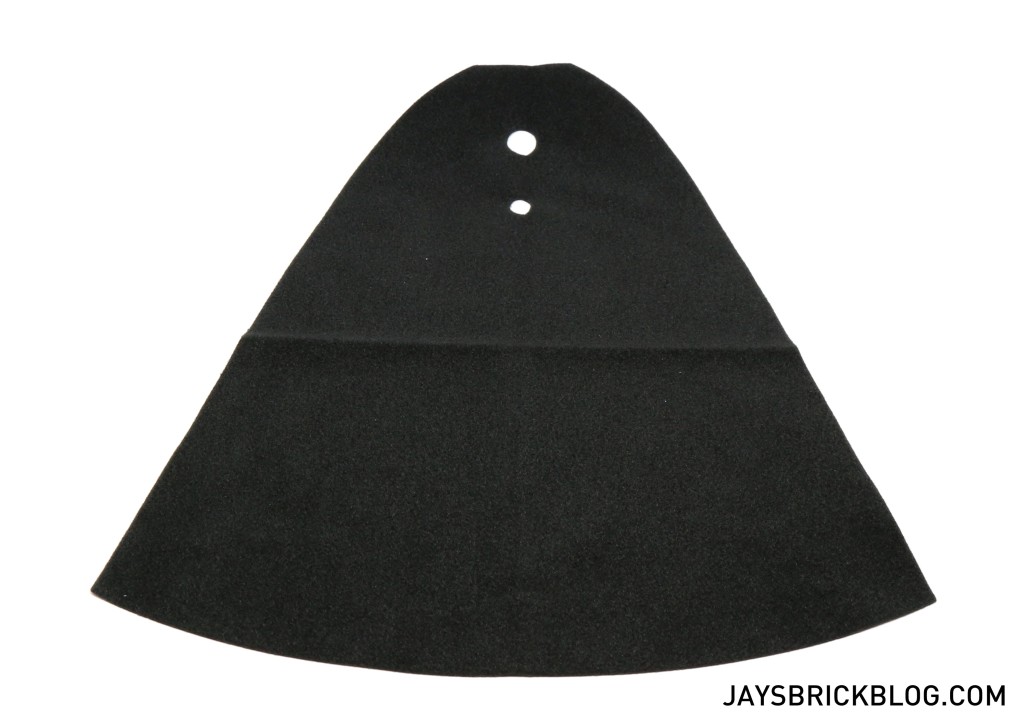 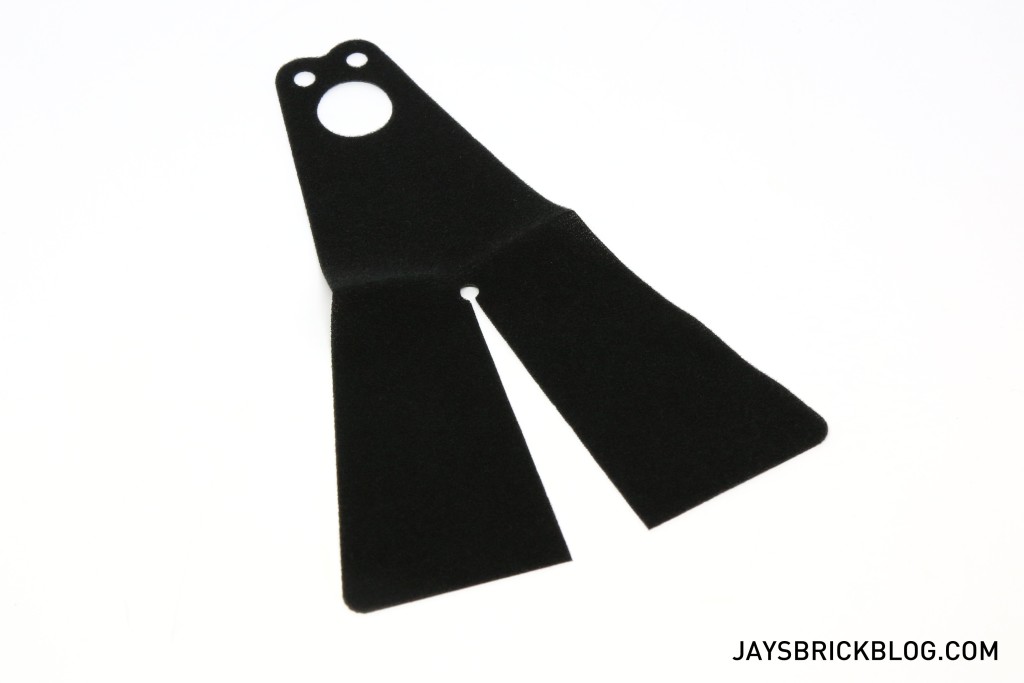 Opening up the box, which didn’t consist of a lot of parts, the first elements that grabbed my attention were the massive fabric capes. The size surprised me and really set my expectations of how large these figures were going to be when they were completed.

You get 2 pieces of fabric, one for Kylo’s Cape and another smaller two-pronged for his robes/skirt.

With only 86 pieces, building Kylo Ren was an absolute breeze, though I didn’t get the same satisfaction as I usually do from building a traditional LEGO set. Instead of clicking bricks together, the entire build process revolved around snapping all the various elements together using ball joints as connectors. I think it took me less than 10 minutes for me to finish the build?

If you’re like me and use LEGO as a form of relaxation after a long day at work, the build experience of these Constraction sets will not bring you much satisfaction. 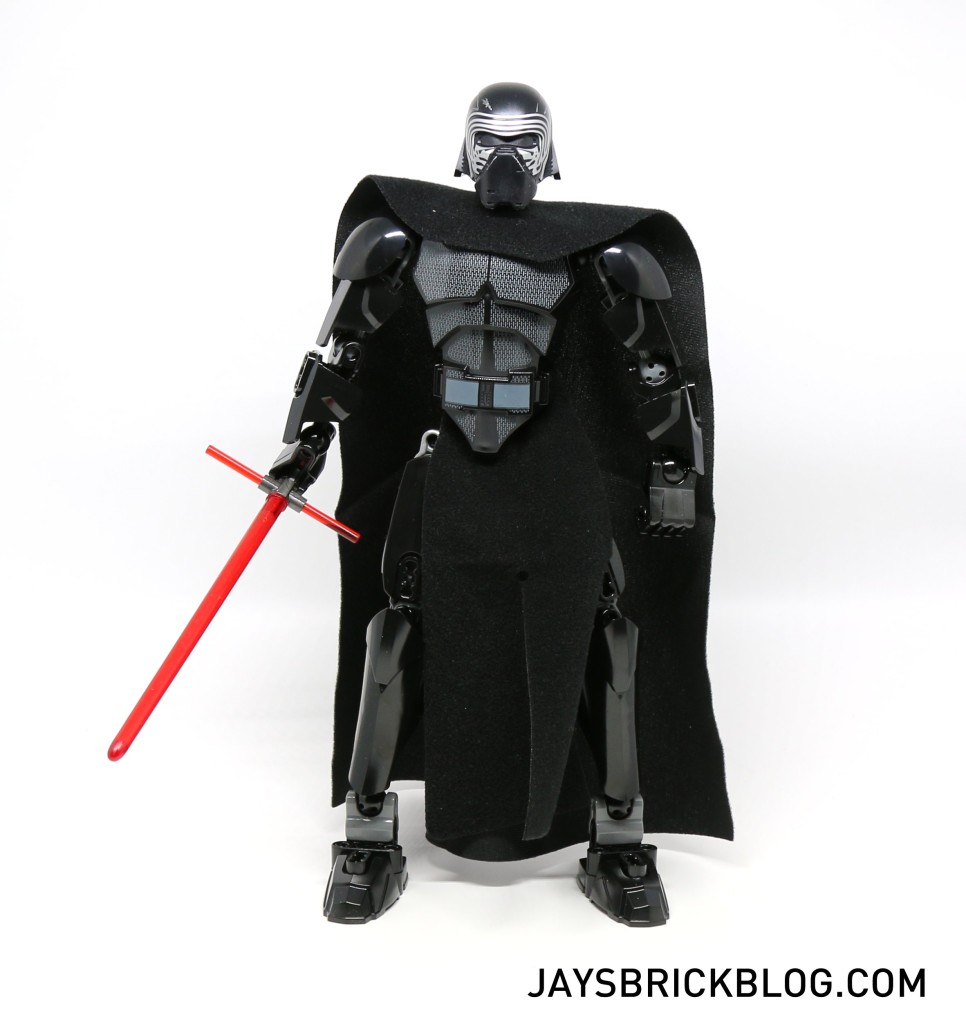 That said, when everything “snapped together” and Kylo Ren’s figure menacingly took shape, I was pretty damn impressed with the end product. Standing over 10″ tall, Kylo was a lot bigger than I had expected and definitely landed on the “larger” end of the spectrum when compared against regular action figures. 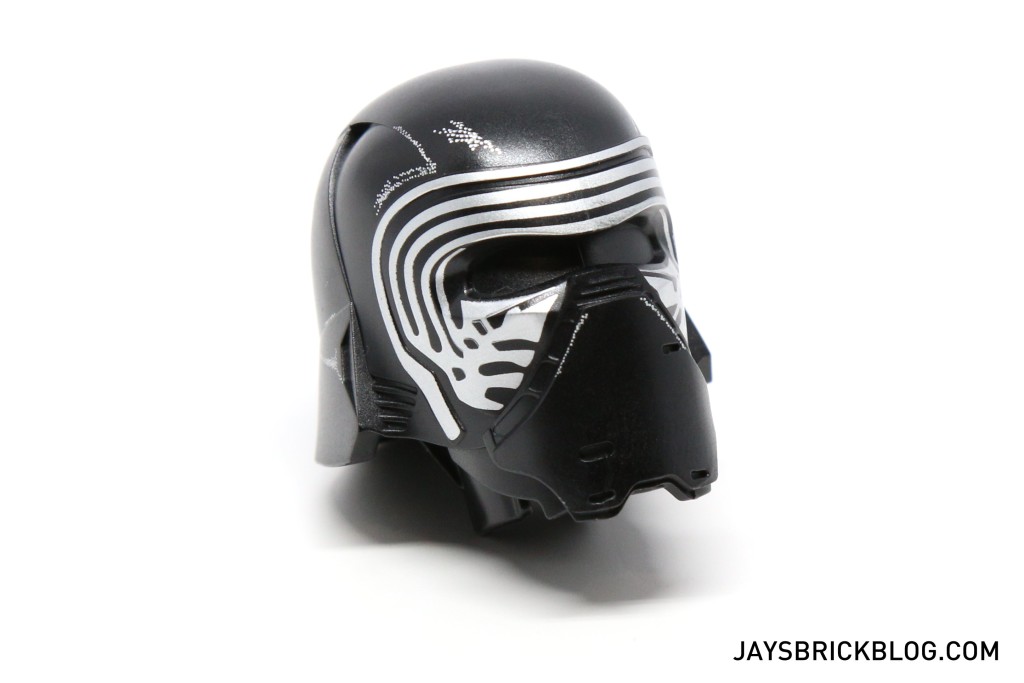 Here’s a closer look at Kylo Ren’s mask, which affords his character a terrifying and foreboding presence. The moulding and printed on the mask is outrageously sharp, with fine little details like scuffs and countours delicately etched onto this solid piece of plastic. 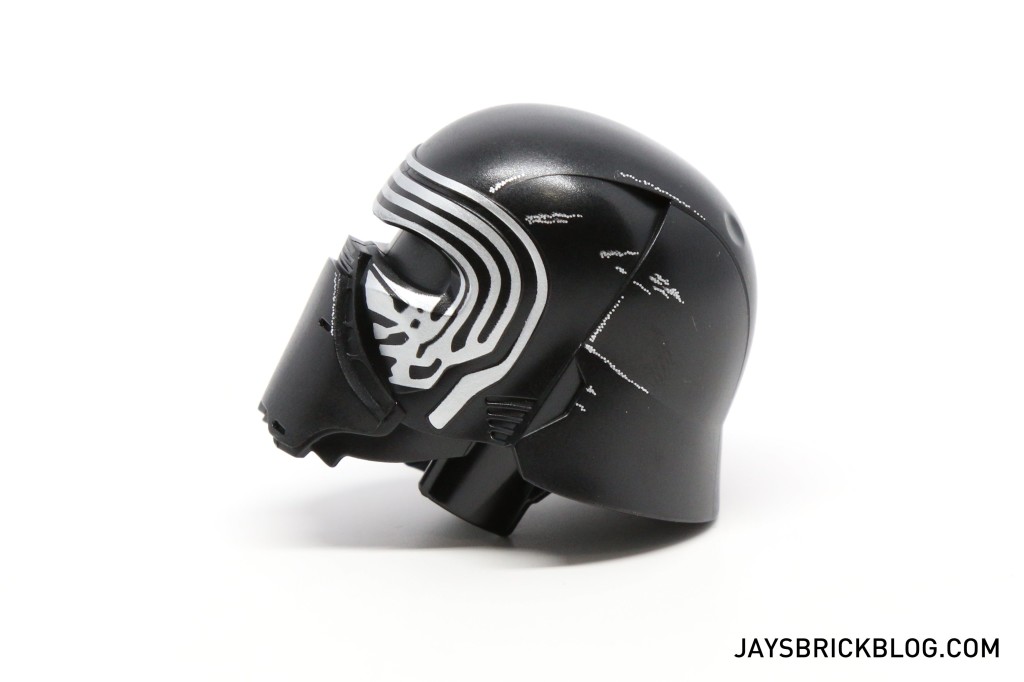 Here’s a look from the side. The silver scratches and scuffs really give Kylo’s mask a convincing weathered and battle-hardened look. The amazing design of his mask goes a really long way in giving Kylo Ren’s buildable figure a very authentic and distinct look. 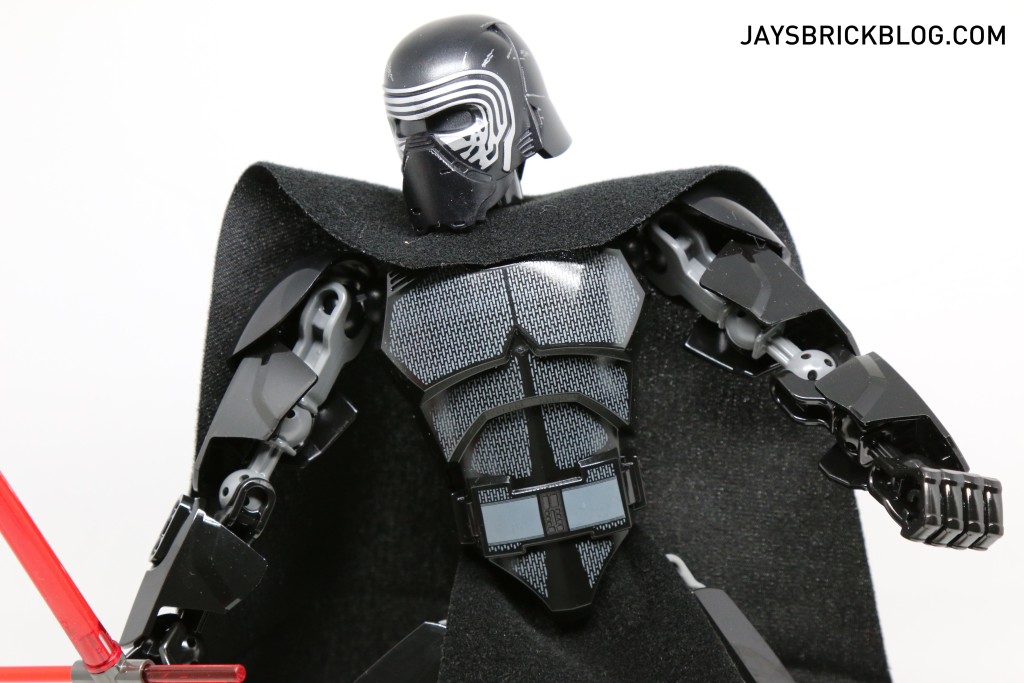 Here’s a look at Kylo Ren’s torso, which has some sort of metallic mesh design across several plated segments. I’m a little iffy about this part of his body as it doesn’t look quite like how he looks in the movies. It looks a little too much like ringmail armour to me as Kylo’s attire in the movie is mostly made up of layered black fabric.

Accuracy details aside, I can see why the designers went ahead with this look as it provides some much needed contrast to all the black on his body. If I haven’t seen the movie at all, I am swayed to think that it actually looks pretty good, giving Kylo a very cyborg-esque exoskeleton look. 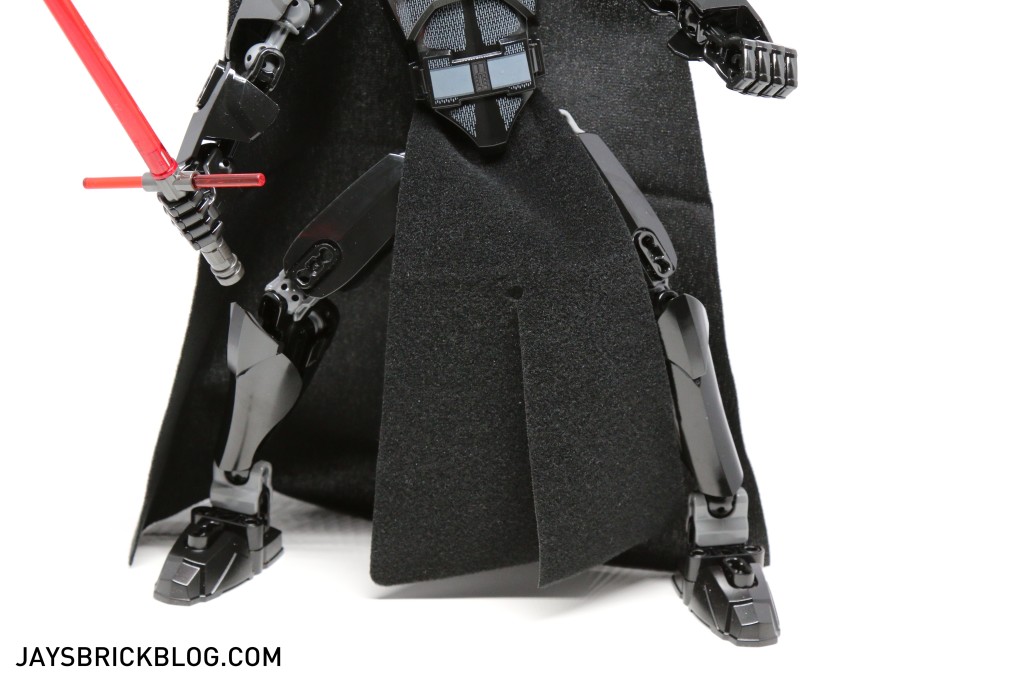 Here’s a look at his legs, where you see the second piece of fabric come into play. The fabric emerges from within his abdomen and does a decent job giving him the “swaying robes in the wind” look as Kylo moves around. 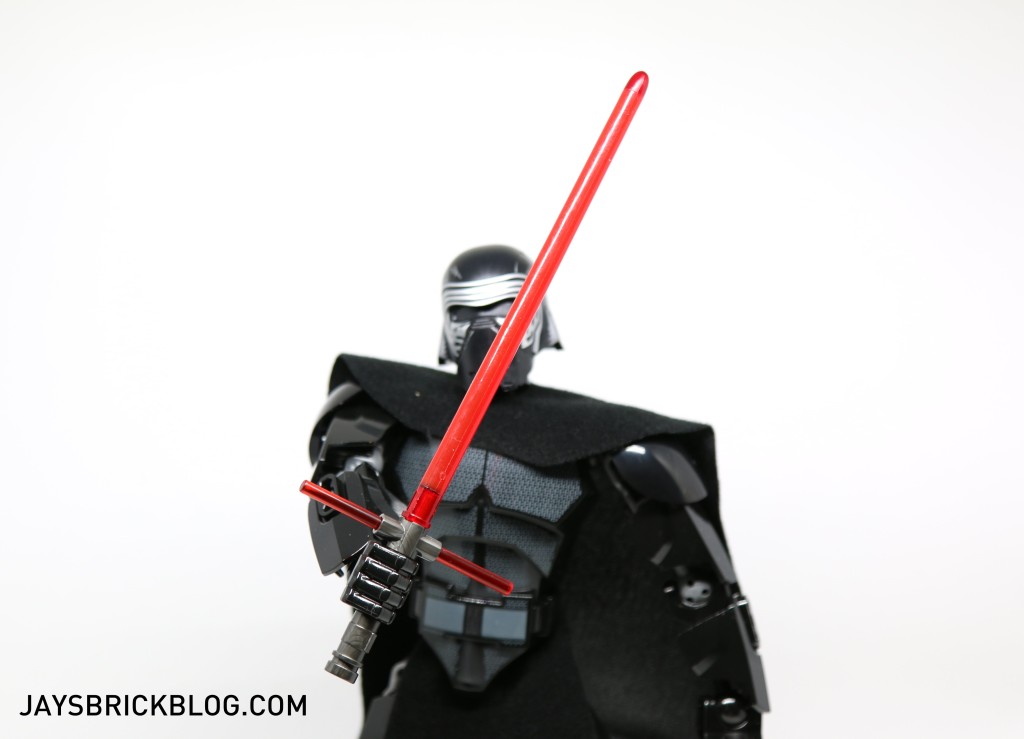 Kylo Ren’s definitive feature is his unstable lightsaber which has excess plasma erupting from the crossguards. Some people panned the design when it was first unveiled but I think it’ll go on to become an iconic lightsaber design, especially after Adam Driver spectacularly brought Kylo Ren to life in The Force Awakens.

The blade looks very cool, although I would’ve preferred it if the blade was slightly thinner. 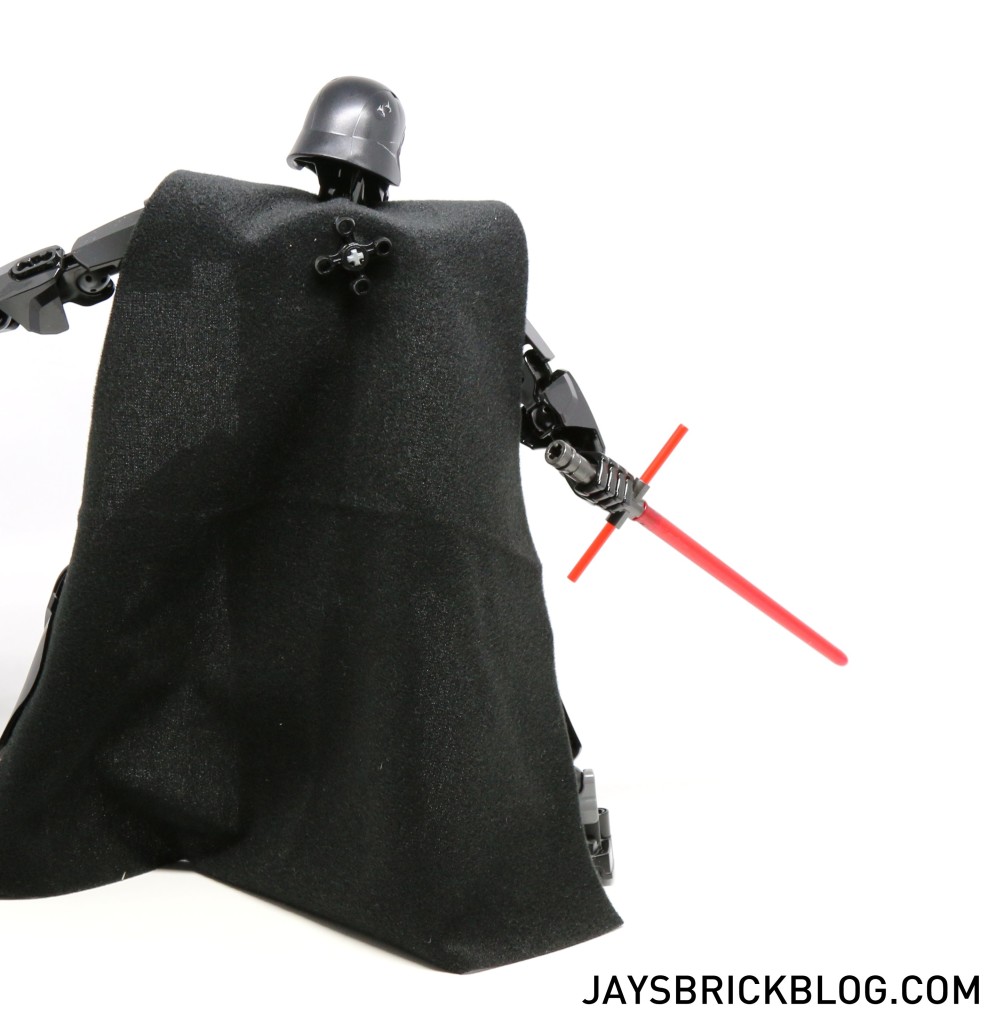 One of the things I enjoyed most about the buildable figure was the ability to pose him in as many different stances that I could think of. Thanks to an array of ball joints that are meant to emulate real human joints, Kylo Ren exhibits a very high level of posability which is a whole lot of fun.

I haven’t played with an action figure since I was like 10, and I found myself having a grand old time messing around with this constraction figure. 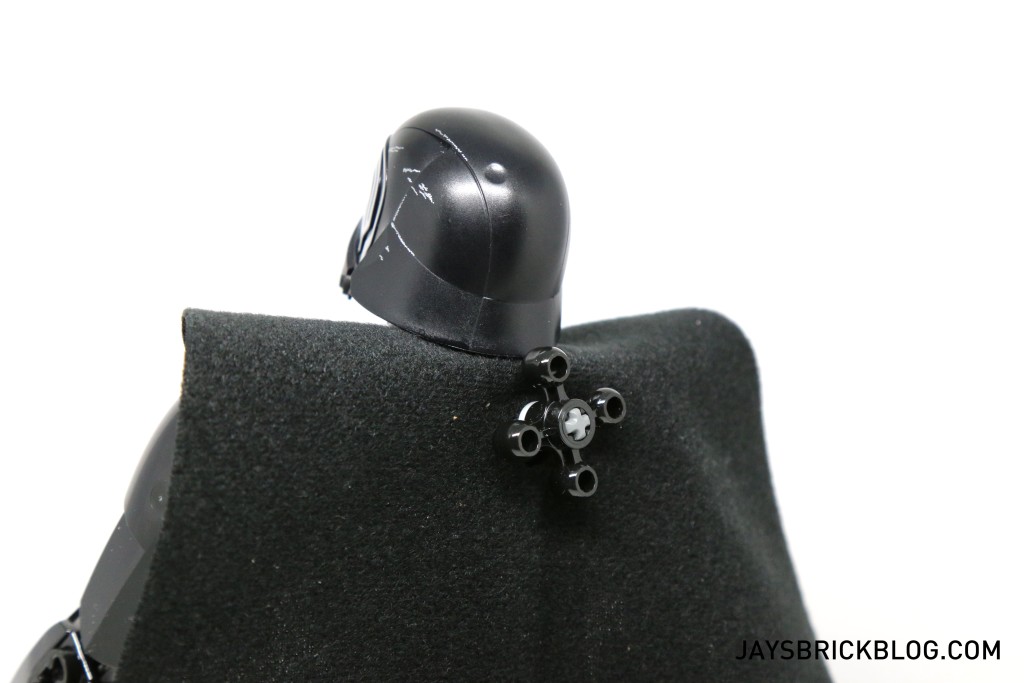 Kylo Ren has a four-pronged knob that awkwardly pokes out of his cape. By twisting it with your fingers, you can activate a pretty neat play feature – making Kylo Ren swing his lightsaber up and down!

Here’s a GIF of Kylo Ren swinging his lightsaber upwards and downwards. The play feature works very well, the action is carried out exceedingly smoothly and although the motion looks pretty primitive, I can appreciate the designers adding this functionality into the build. 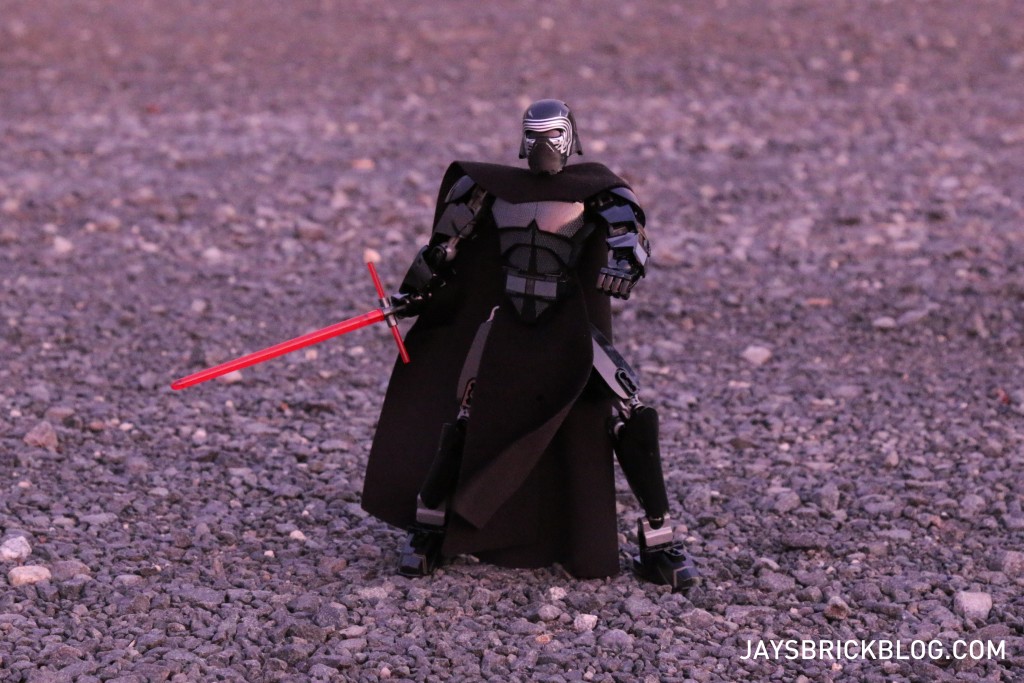 Final thoughts:  I enjoyed the buildable Kylo Ren figure so much more than expected. The experience was so positive that I am actually going to collect most of the Star Wars Constraction Figures, especially those that are well designed, without human faces.

Kylo Ren’s buildable figure benefits from being masked, which gives him a menacing, almost robotic look which translates well into this buildable figure format. His nondescript all-black attire also transitions well using a variety of arm, shin and body armour pieces to ensure that he doesn’t look too unnatural.

While these buildable figures might seem unorthodox to traditional LEGO fans, I feel that the key to enjoy them lies in not trying to perceive them as LEGO but more like posable action figures made out of specialised LEGO parts. Once I was able to look passed that, I could fully enjoy Kylo Ren and build an appreciation for this particular format of LEGO sets.

Kylo Ren hits all the right notes, nailing his overall design and capturing his on-screen character’s threating, mysterious and dangerous persona in a LEGO format that is surely to be a big hit with both the young and old. Younger kids will no doubt enjoy the high level of playability and role-playing value of a Constraction Figure and older fans like me can utilise the posability for an ever-changing display piece.

Paired up with other buildable figures, especially from The Force Awakens, Kylo Ren will no doubt be a fun little LEGO set to display. One of the only things that hold Kylo back from being a must-buy is the relatively high price.

AU$40 is quite a pricey investment and even if you can get a 20% discount, I still feel that it’s not for everyone, although Star Wars fans would no doubt see and justify the cost for such an important and impactful character.

If you’re on the fence about these buildable figures like I did, I would probably recommend picking one of them up just to experience it properly to make up your mind on whether you can integrate and assimilate these Constraction Figures into your collection. If you already have Star Wars ships, builds or models on display, the buildable Kylo Ren will find it really easy to fit in seamlessly with your other LEGO star wars sets. 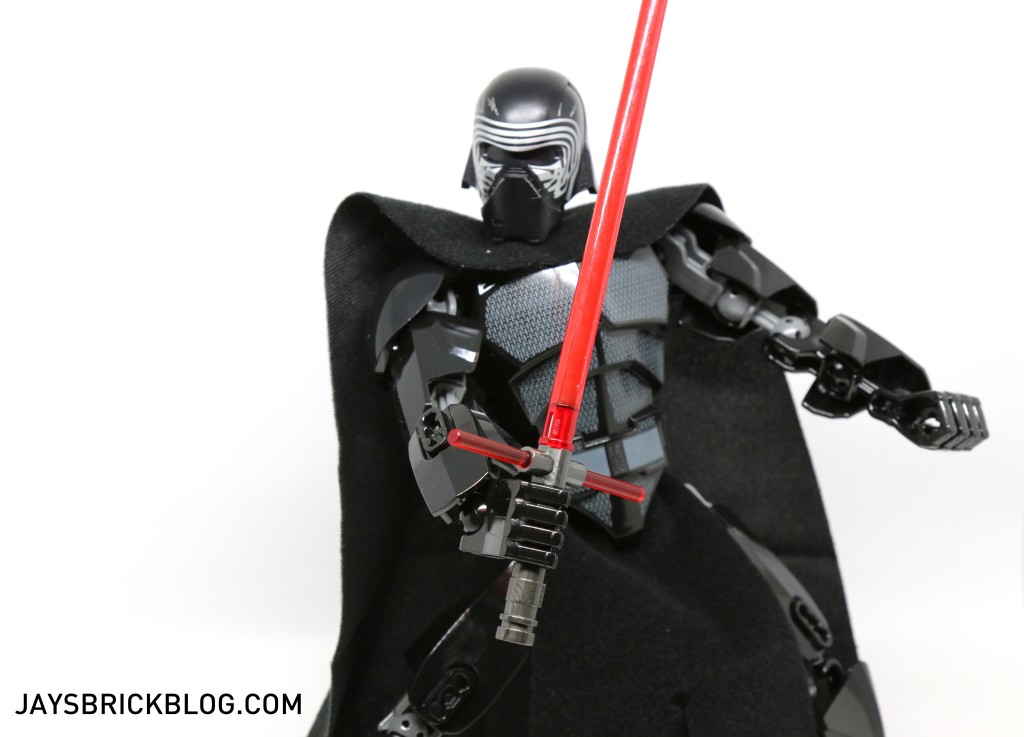 Thanks for reading my review! Have you gotten a taste of the Star Wars buildable figures? I’d love to know what you think of the format in the comments section!