I can’t seem to get enough of the new LEGO Star Wars buildable figures. Honestly, I’ve been quite surprised by how much I’ve been enjoying these buildable figures. They’re relatively quick builds, are mostly quite well designed and look great on display due to their sizes.

Call it a bit of nostalgia, but these action figure type LEGO creators take me back to days I would spend playing with poseable action figures. I’ve reviewed Kylo Ren (which I really liked) and Finn (which I didn’t like) – up next, a review of the Captain Phasma buildable figure! 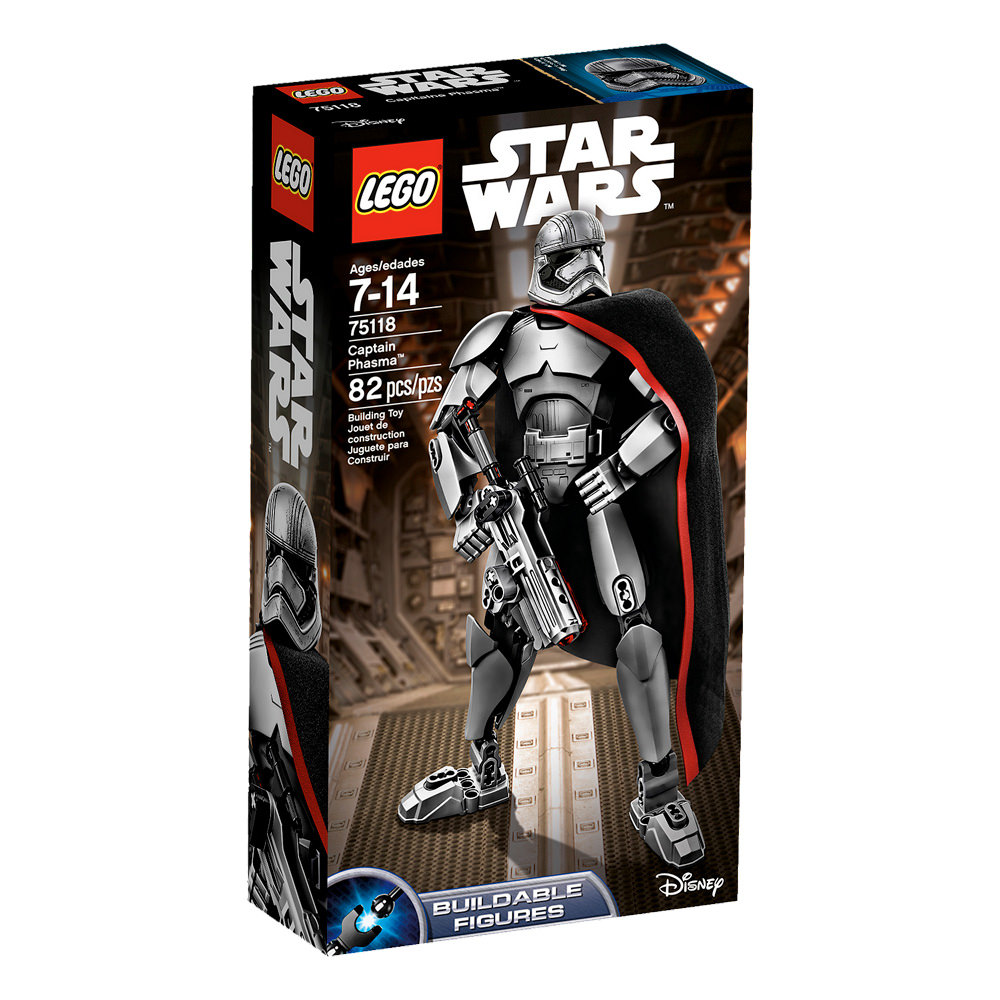 Before The Force Awakens came out, Star Wars fans had astronomical hopes for Captain Phasma. She was billed as the new female Boba Fett, her gleaming Stormtrooper armour striking fear into soldiers under her command as much as her enemies. Played by the towering Gwendoline Christine of Game of Thrones (Brienne of Tarth) fame, expectations were high for Captain Phasma’s role.

Unfortunately, she barely featured at all in the movie and was criminally underutilised… kinda like Boba Fett. Anyway, we all know why Captain Phasma, a chrome Stormtrooper with a menacing cape was put in the movie – to sell merchandise. I don’t have any complaints with that! 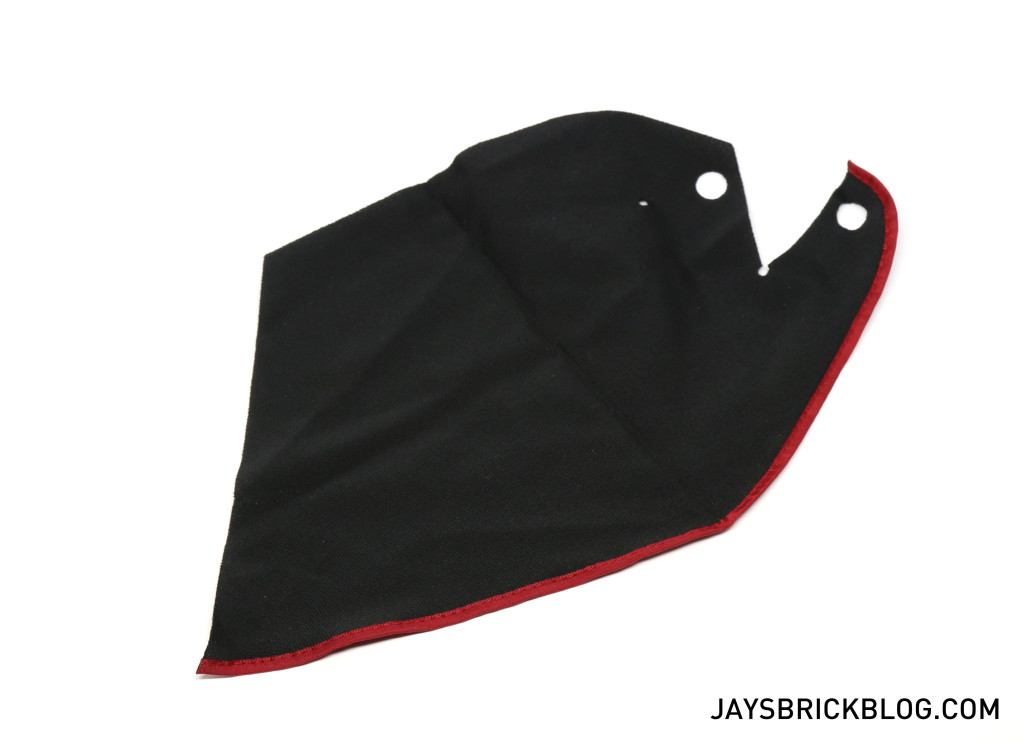 Here’s Captain Phasma’s asymmetrical cape, which drapes over one shoulder in a really attractive and cool manner. The red trim looks really good and the fabric is heavy enough to have significant weight and it has a bit of a velvety texture to it. 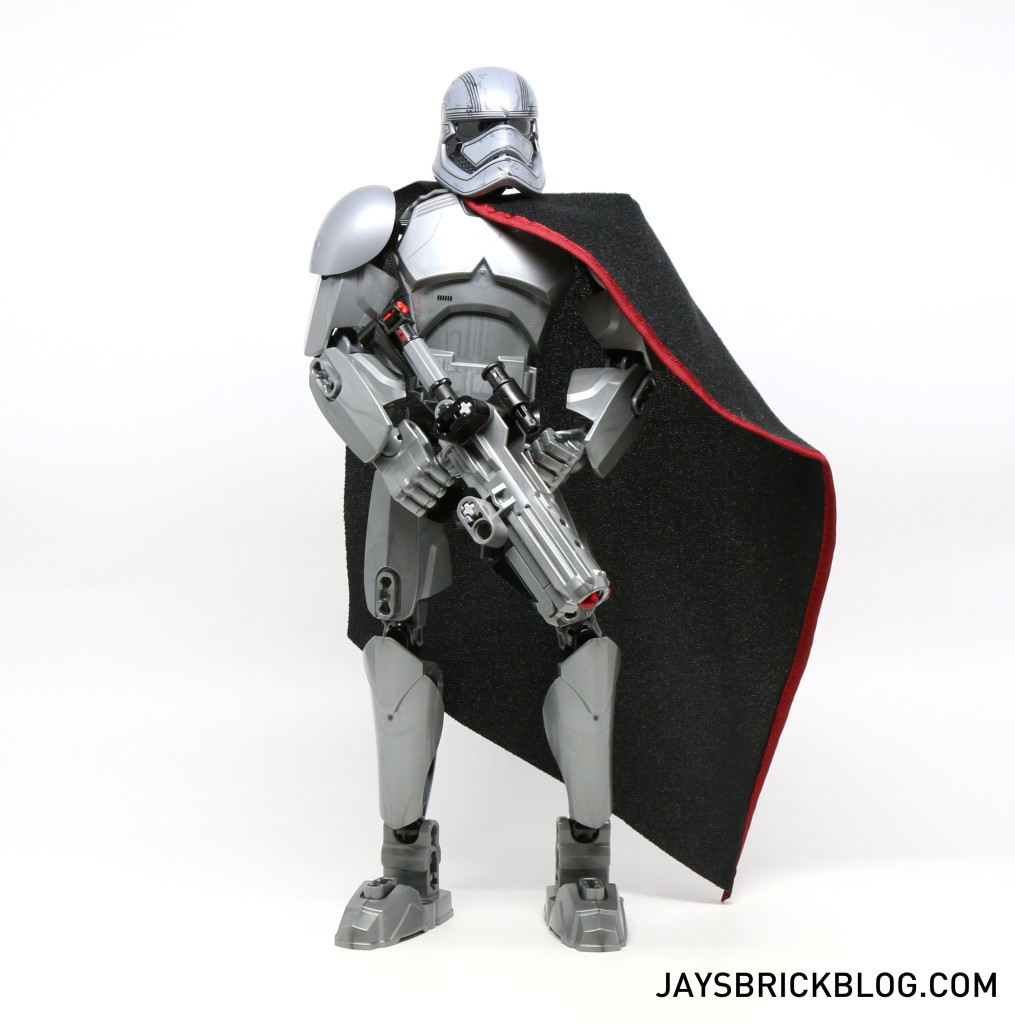 Here’s the completed build. Like all buildable figures, the build process is fairly generic. You snap together all the different parts using ball joints and clips to Phasma’s central torso piece which is enclosed in the front and back armour pieces. Phasma wields a blaster rifle, which is similar to Finn and requires some assembly.

Man, does Captain Phasma look good. Unfortunately, LEGO didn’t manage to chrome her up like in the movies, so we end up with a pearly silver sheen which still looks awesome. I would love a properly chromed special edition version of Captain Phasma – if the buildable figures line does well, I can definitely see it happening in the future. 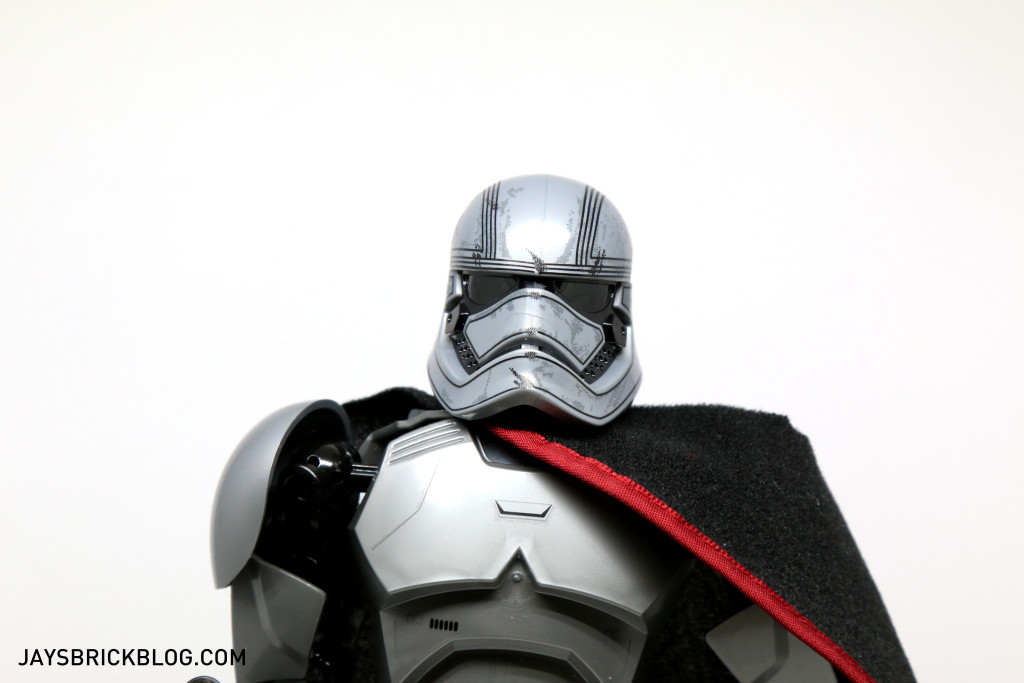 Captain Phasma’s helmet is a thing of beauty. It’s identical to a Stormtrooper’s helmet (the new version), just in a different colour. The moulded details are really exceptional, from the air vents to the battle-scarred marks that you’d expect from a decorated Captain of the First Order. 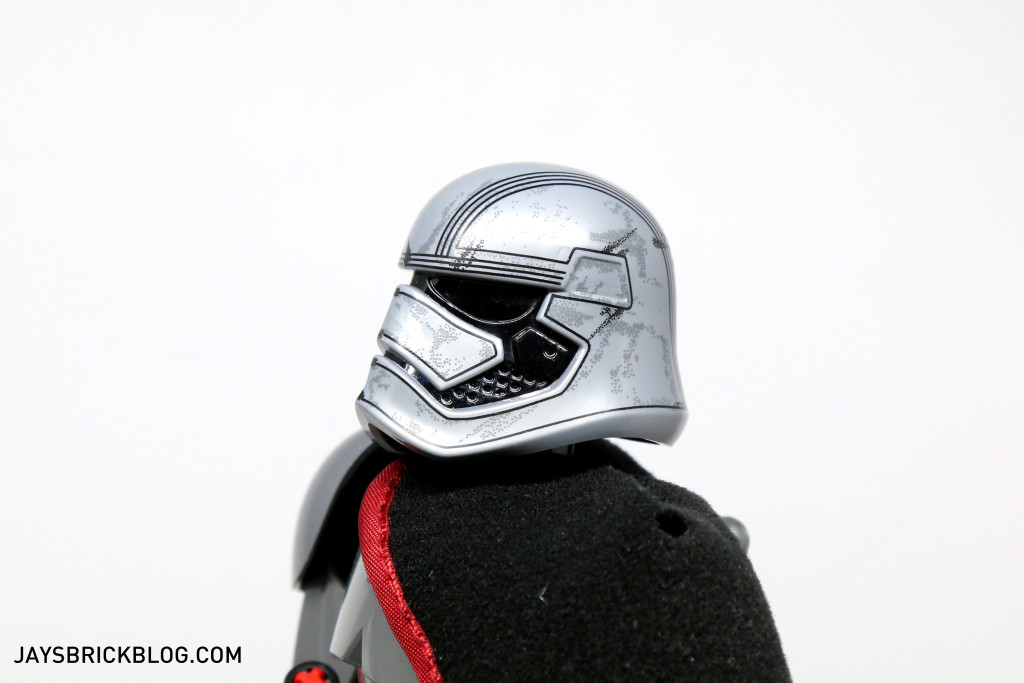 Here’s a side view of Captain Phasma’s helmet, where you can really appreciate all the fine details etched or printed into it. I’m beyond impressed by the quality, workmanship and overall design of these helmets. 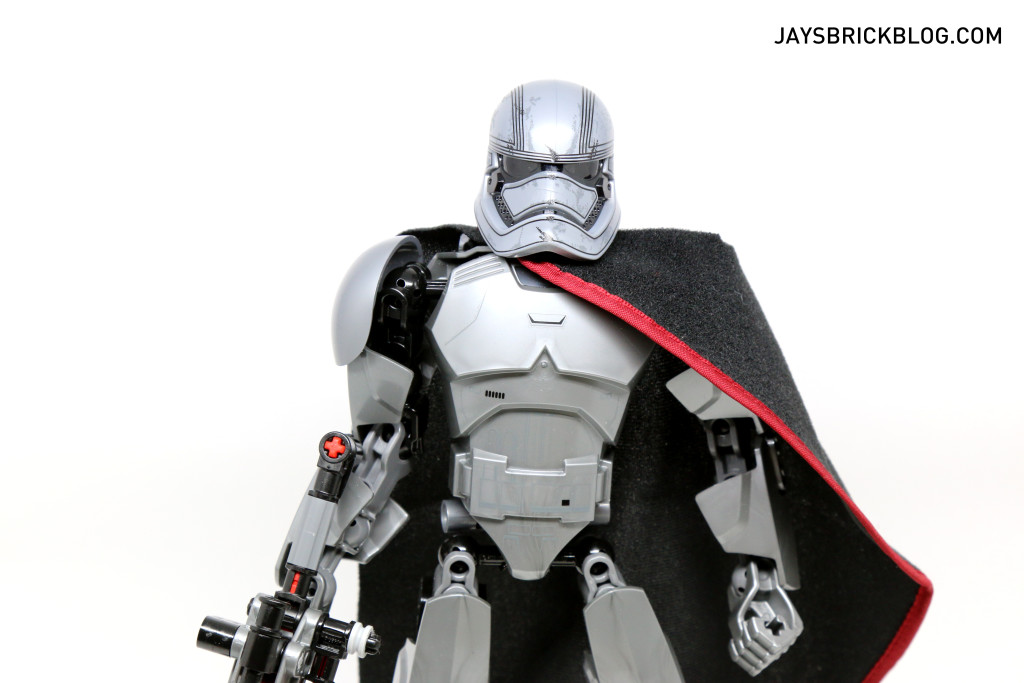 While her helmet is wonderfully detailed, Captain Phasma’s torso could’ve been improved a lot more. For starters, it looks quite plain and bland. The distinct layered segments and belt are moulded well but I would’ve loved a lot more printing on her torso to give it a bit more detail.

Compared to the battle-scarred helmet, Phasma’s torso just seems unnaturally clean and sterile. Have I mentioned how much I like her one-shouldered cape? 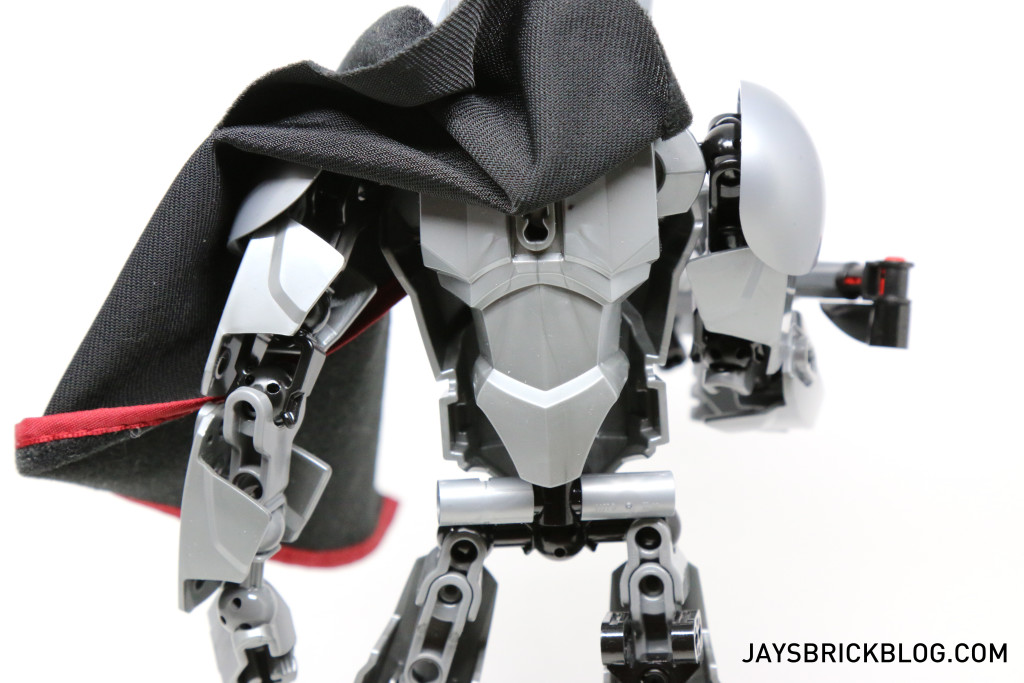 Captain Phasma’s back is mostly obscured by her cape, so you don’t really get to view it under normal circumstances. There’s nothing particularly of note, just a back armour piece. 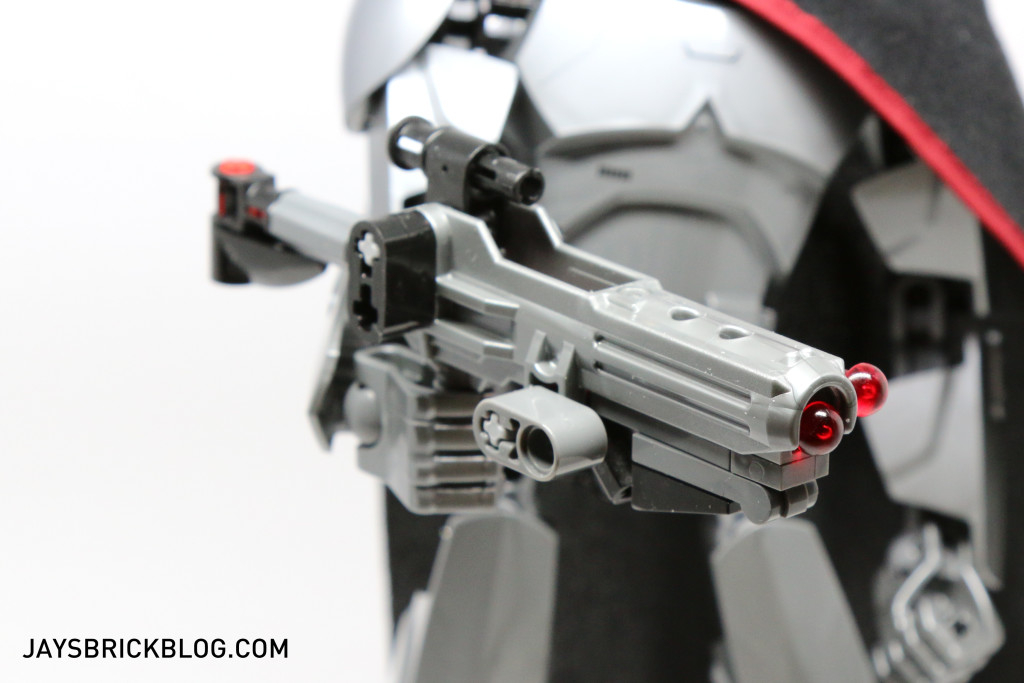 This is Captain Phasma’s blaster rifle, which contains a spring loaded missile launcher. The blaster is quite well designed with a small number of technic parts to give it a bit of weight and a more interesting design. 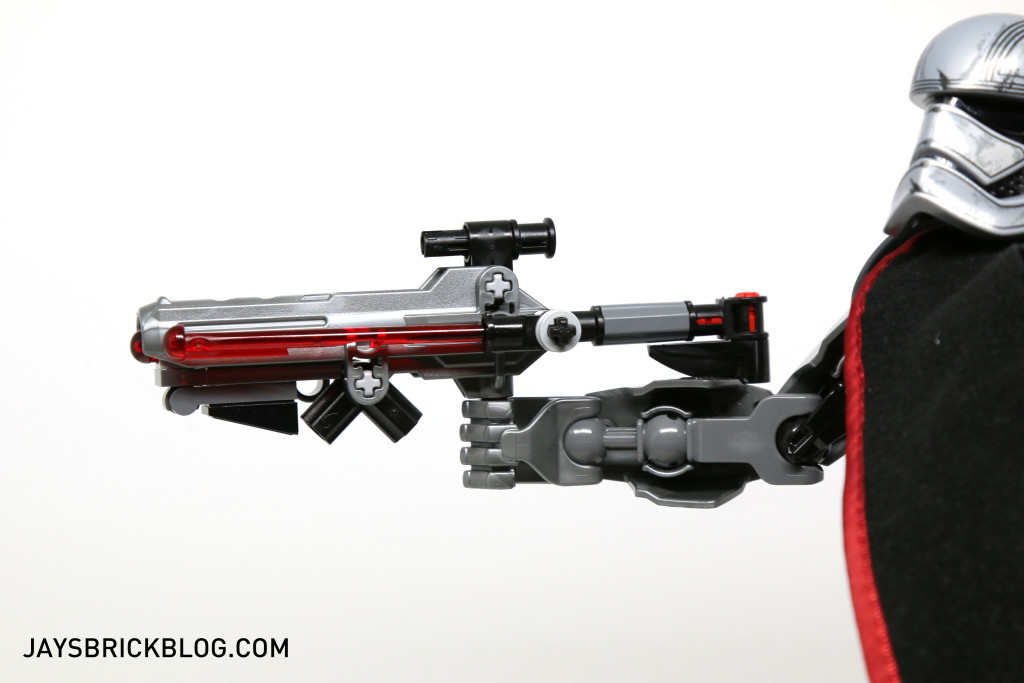 Here’s how it looks from the side – there’s a clip for extra ammo, Just in case you lose one of them firing it all over your room. 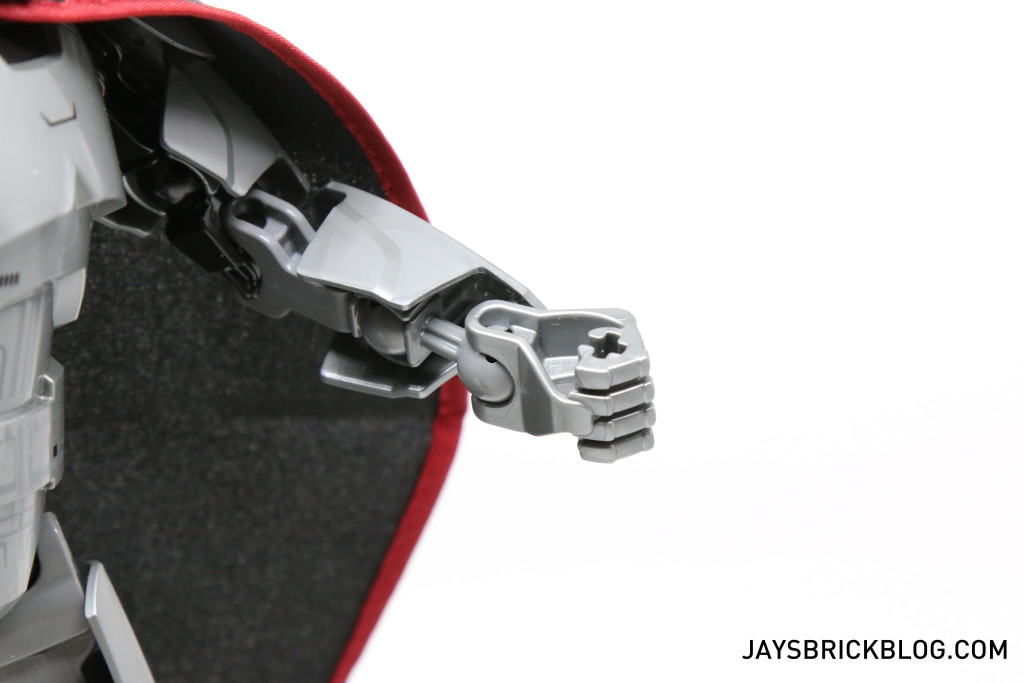 I do wish that LEGO could improve the buildable figure’s hands. They’re reversible, which makes them a bit of utility, but the design suffers as a trade-off. I would’ve preferred them to be moulded to mimic a human’s hands, with a noticeable thumb in the right location for some extra realism. 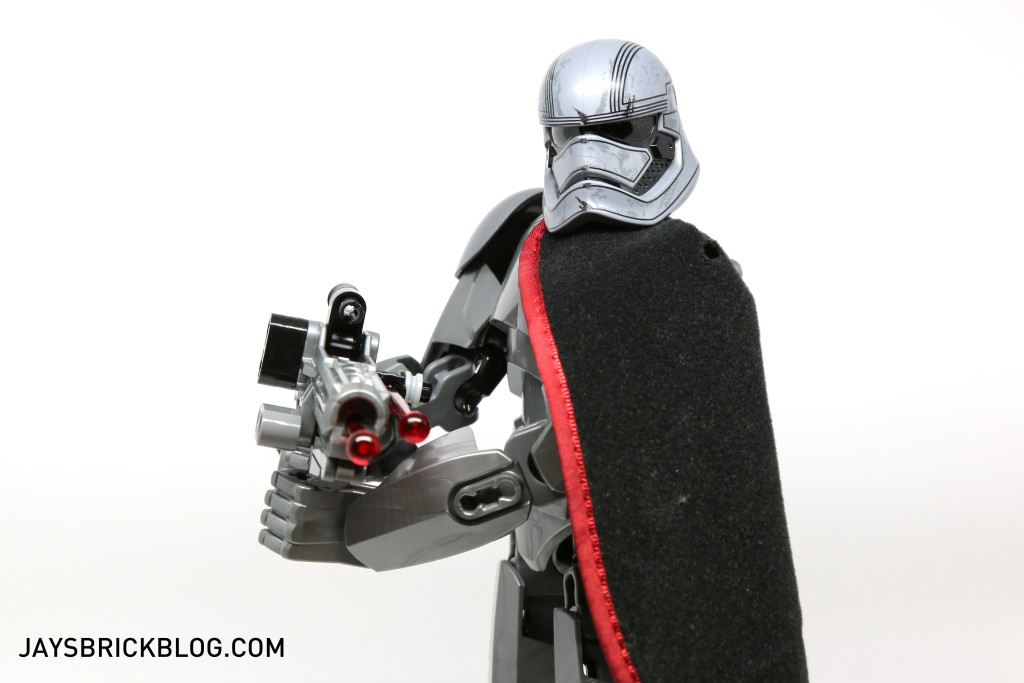 Like all Star Wars buildable figures, the poseability and playability of these models cannot be overstated. The articulation afforded by the ball joints allow you to pose Captain Phasma in any number of ways – making her a particularly attractive display piece. 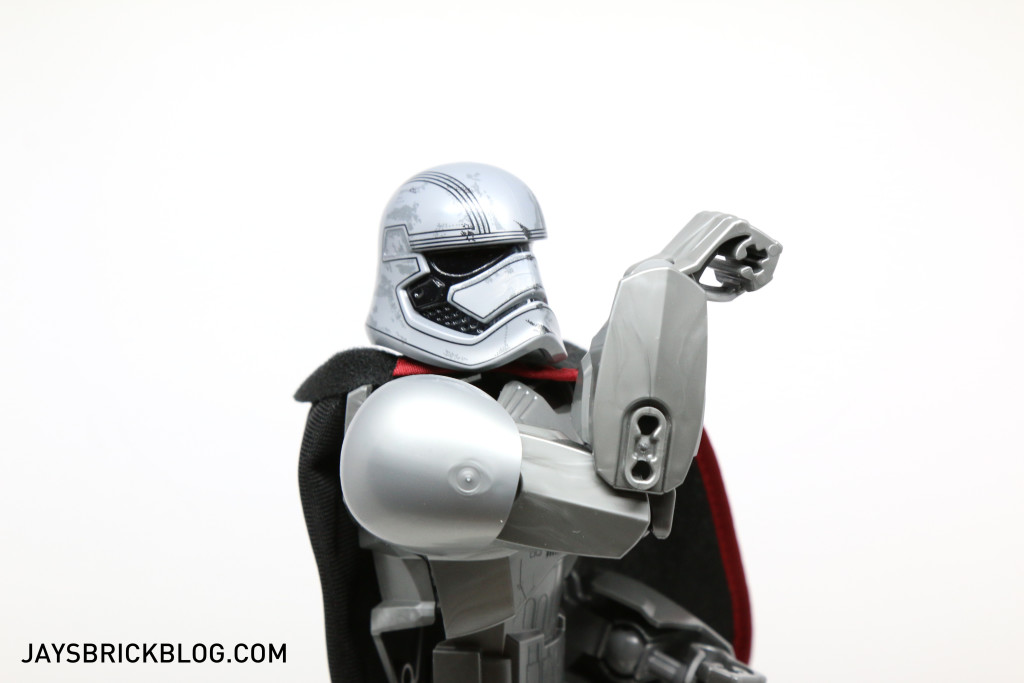 You can do plenty of fun things like making Captain Phasma flex and show off her guns. 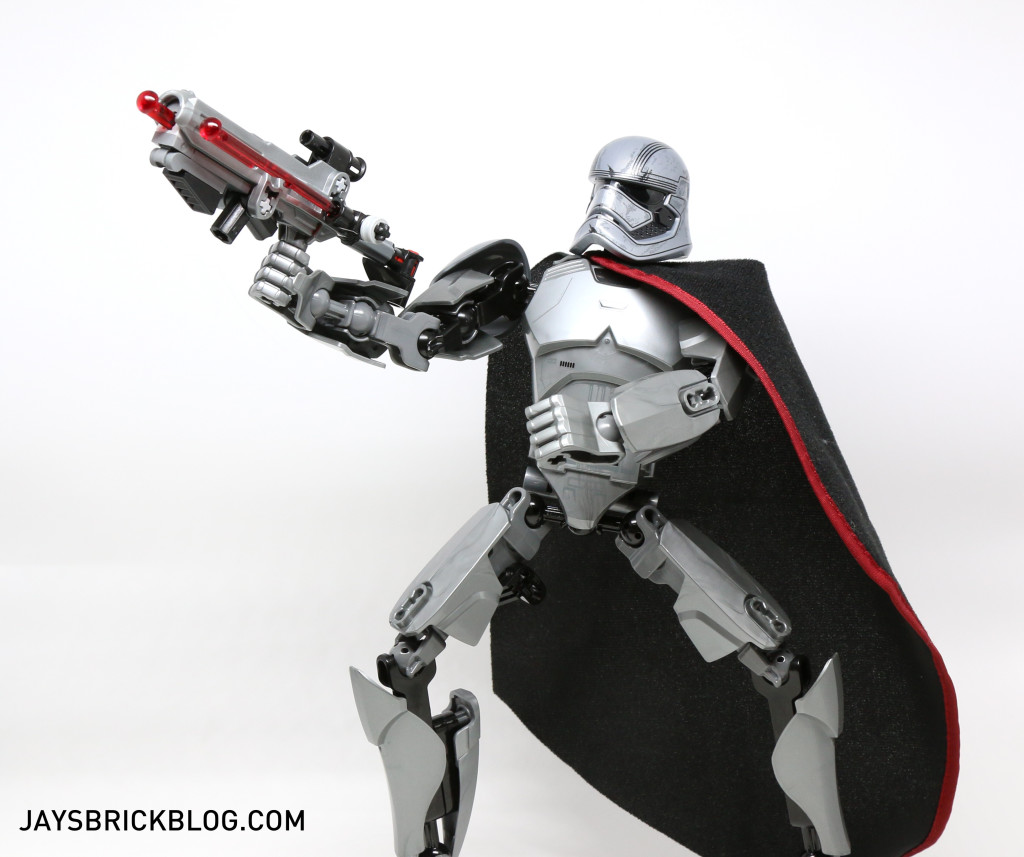 Or pose her in all sorts of silly ways!

I’ve seem to have caught the buildable figure bug, and I was really pleased with Captain Phasma, despite some shortcomings like her plain torso which could do with some additional printing. The fantastic details such as the rich battle-scarred helmet and great looking cape more than make up for her detail-lacking torso.

While Captain Phasma might’ve been robbed of an interesting role in the movie, the buildable version of her manages to check all the right boxes. Captain Phasma looks imposing, menacing and most of all, like a First Order Captain that you do not want to cross.

If the LEGO Star Wars buildable figures appeal to you, you cannot go wrong with Captain Phasma. 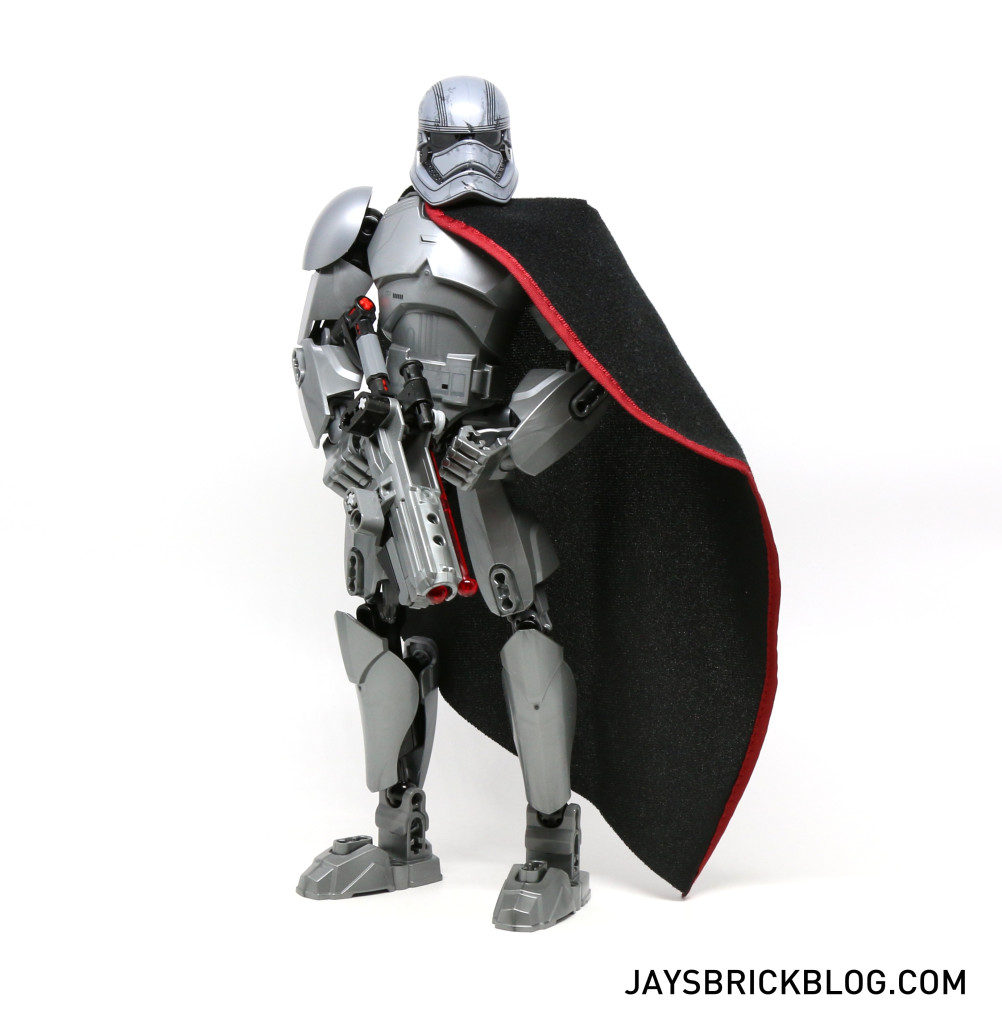 Thanks so much for reading! Have you gotten into the Star Wars buildable figures or own Captain Phasma? Let me know what you think of her, or the theme in general in the comments section.

Captain Phasma, along with some of the other 2016 LEGO Star Wars sets are starting to show up in stores across Australia. They seem to be selling well, so don’t wait too long to pick one up!

« Have you got your Brickvention 2016 tickets yet?
LEGO goes full retro with 76052 Batman™ Classic TV Series – Batcave »