It’s been awhile since my last Speed Champions review where I took a look at last year’s sticker-overloaded (but still enjoyable) Ferrari 458 Italia GT2. LEGO have released the second wave of Speed Champions after the apparent success of the theme’s debut last year, featuring 3 new carmakers – Ford, Chevrolet and Audi to the stable of sets.

Unfortunately, the 2016 Speed Champions sets are not available in Australian retail stores yet. Insiders inform me that the Australian retail release date will be somewhere in June 2016. If you want to get your fix like me, you can order all the new sets from LEGO.com if waiting till June isn’t your cup of tea.

I consider myself a super-casual automotive fan – I respect and admire performance cars and stuff but I’m horrible at the finer details and wouldn’t be able to hold a conversation with a seasoned car enthusiast for longer than 5 minutes, so pardon me if I make any automotive faux pas! For my first 2016 Speed Champions review, I’ve decided to take a look at 75871 Ford Mustang GT!

Since I was away for the Easter holiday, I had some fun with the photography for this review and took most of the shots outside, instead of in my studio. I quite liked how the photos came out and I hope you enjoy them as much as I did! 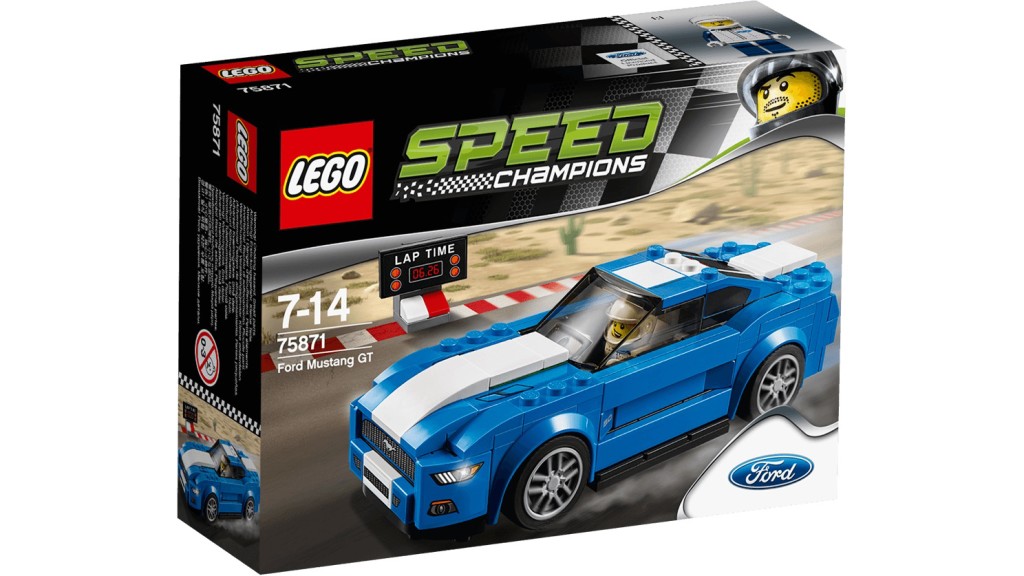 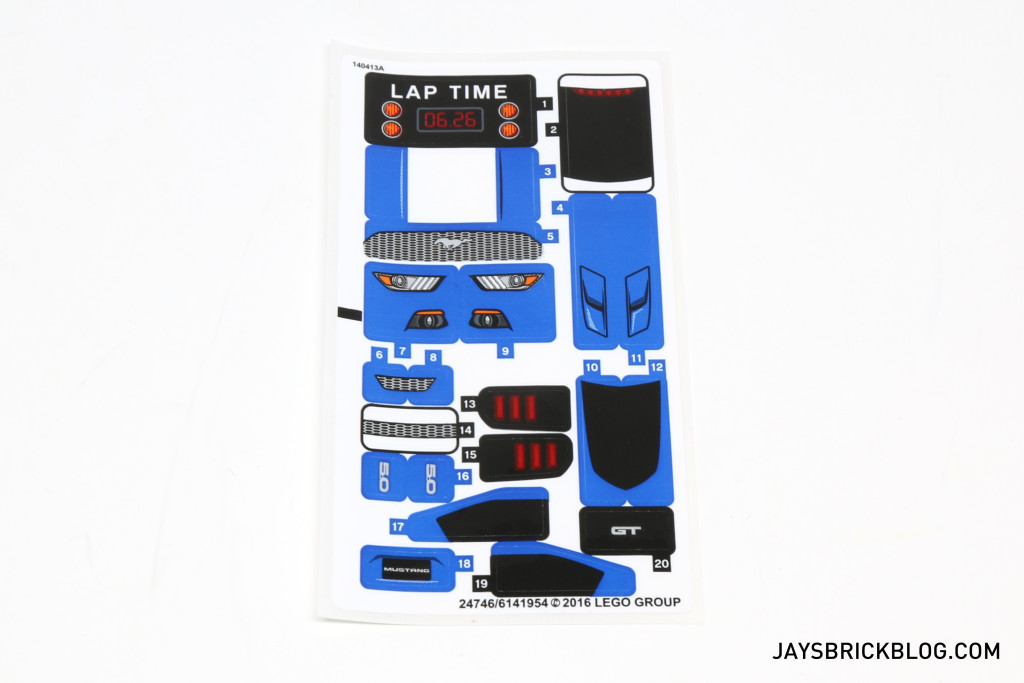 If you hate applying stickers, stay far far away from the Speed Champions theme as the sets are absolutely littered with them. The Ford Mustang GT set has 20 stickers, including a new horrific type of sticker that I now hate more than anything else – cheese slope/1 x 1 tile stickers. UGH. Those were a massive pain to apply since they’re absolutely tiny.

With Speed Champions cars, the stickers are a necessary evil (more so than any other sets) due to the necessity to replicate the real car’s looks and features onto a tiny LEGO model. It’s not the greatest experience and kids (or those born without deft fingers) will definitely struggle with them. 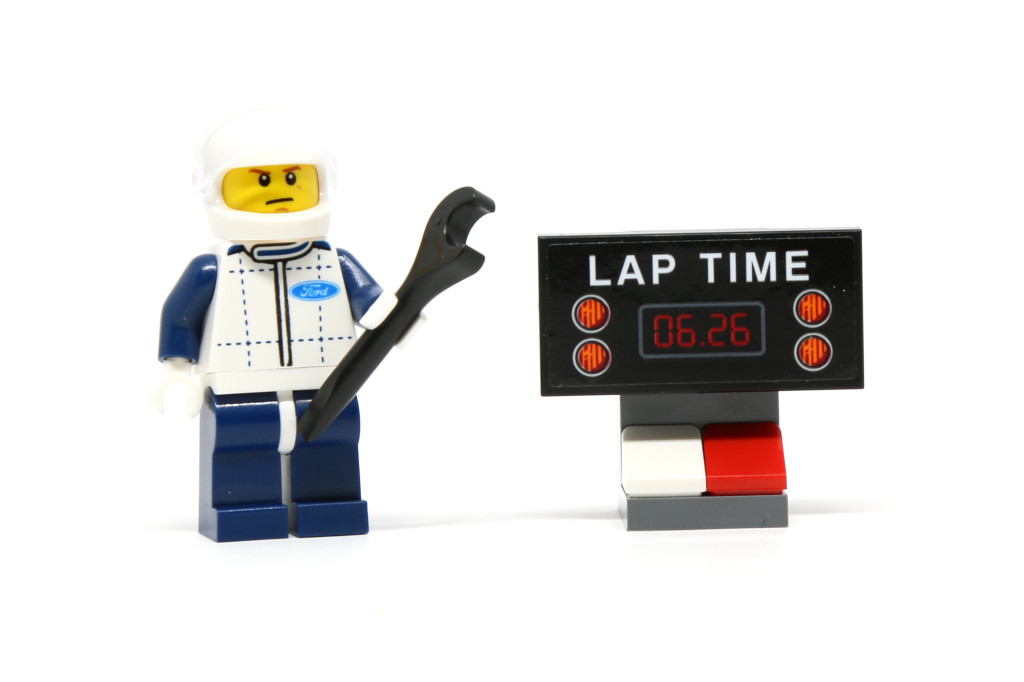 The build starts off with the assembly of a small timing board that displays the lap time. It’s a stickered tile and isn’t the most interesting build in the world, but it gives quite a bit of additional context to the Ford Mustang GT as a whole, what with it being a performance car and all that. 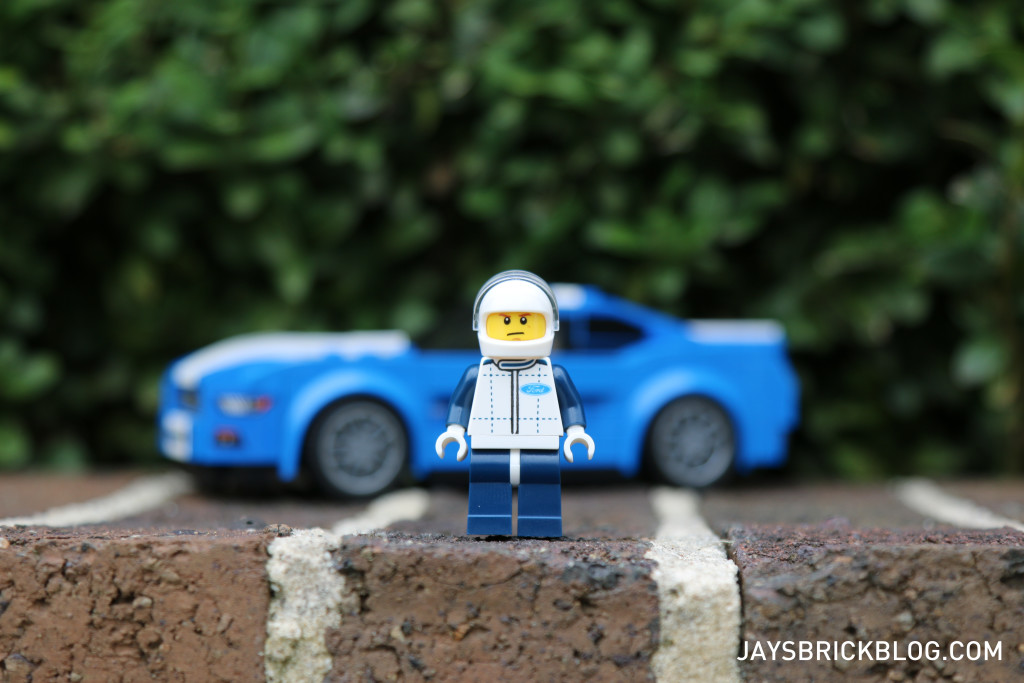 Here’s a better look at the Ford racing driver minifigure. They nail the colours of the driver’s quilted racesuit right, with the dark blue and white bits taking cues from Ford’s logo. Speaking of the logo, there’s a small logo printed on the left breast of the driver, but the blue seems a little bit too light and bright for me.

It’s also quite tiny and hard to make out. Unfortunately, no arm or leg printing which isn’t that big of a dealbreaker. 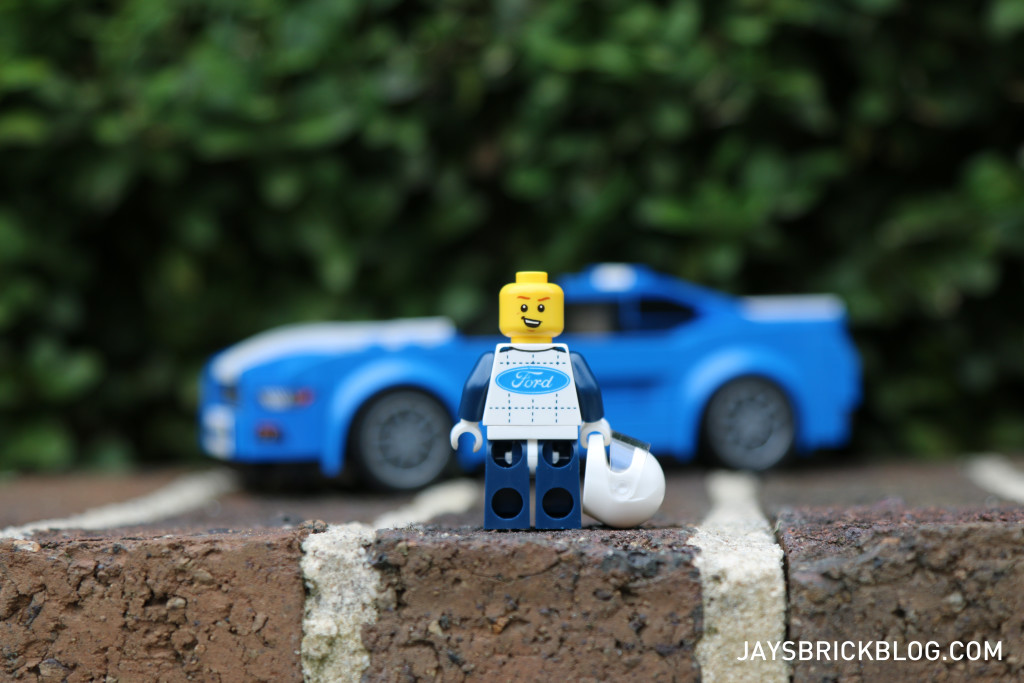 Here’s a look at the minifigure’s back printing, where there’s a larger Ford logo and continuation of the racesuit’s stitching detail. The driver also has an alternate face, which is a slightly cocky smirk which is a great new expression and could be useful for minifigure photographers. 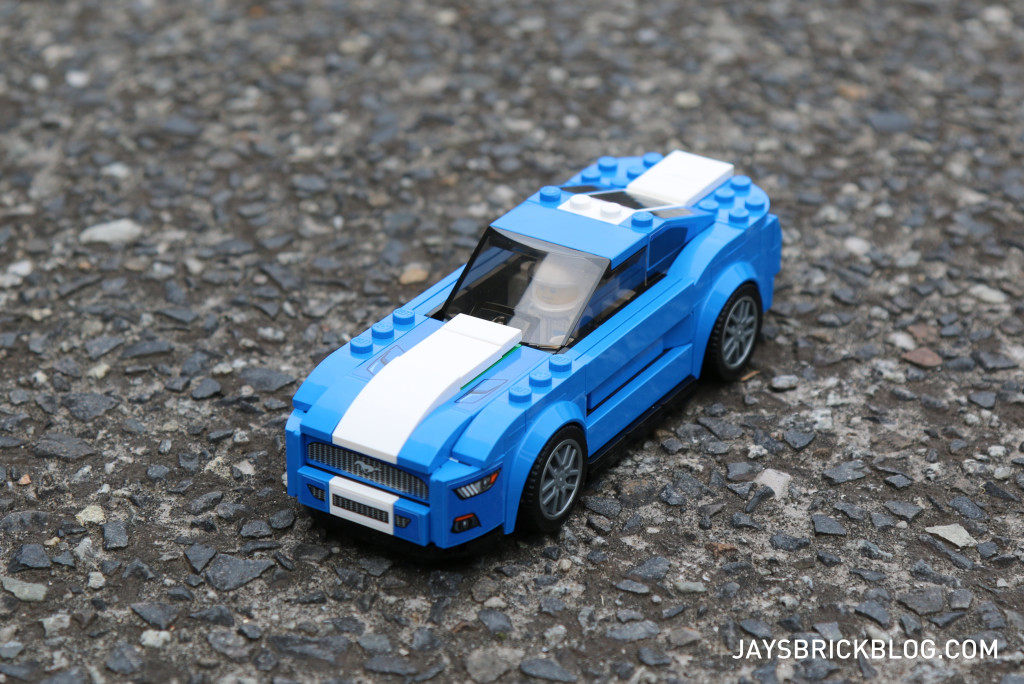 The completed model is a thing of beauty and if you’re a die-hard Ford enthusiast, the LEGO Ford Mustang GT will totally get your engines going. Based on the latest model (2016, I believe) of the renowned American motorsport icon, the Ford Mustang GT comes in its hero colour of blue with the white racing stripe going down the middle.

With the stickers, it’s a fairly accurate representation of the Ford Mustang GT. I coincidentally saw one on the road (in black) just this Easter weekend when I was away for a short holiday and thought that the LEGO designers did a fantastic job of getting most of the features right albeit using stickers as a means to do so. 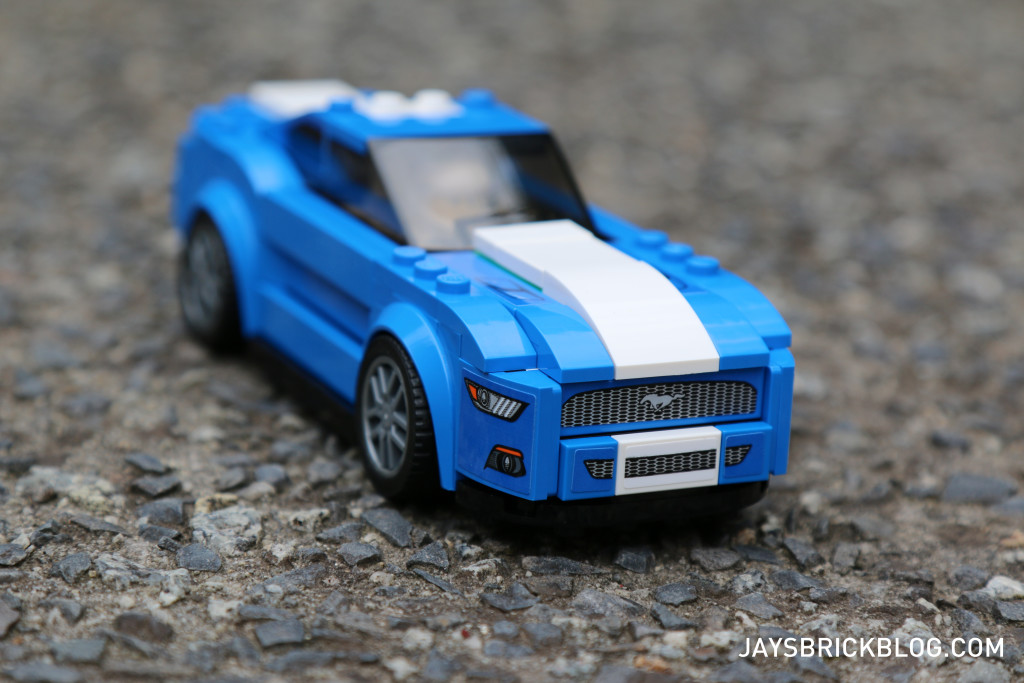 The front of the car’s details are all achieved via stickers which gets the Ford Mustang GT’s mesh grille look right. I really like the Mustang’s Pony emblem printed on the front, situated right in the middle of the racing stripe.

The headlights on the other hand look a little off, as they’re a bit too far off to the side. Chalk this up to the limitations of LEGO and the adherence to keeping this car 6 studs wide. 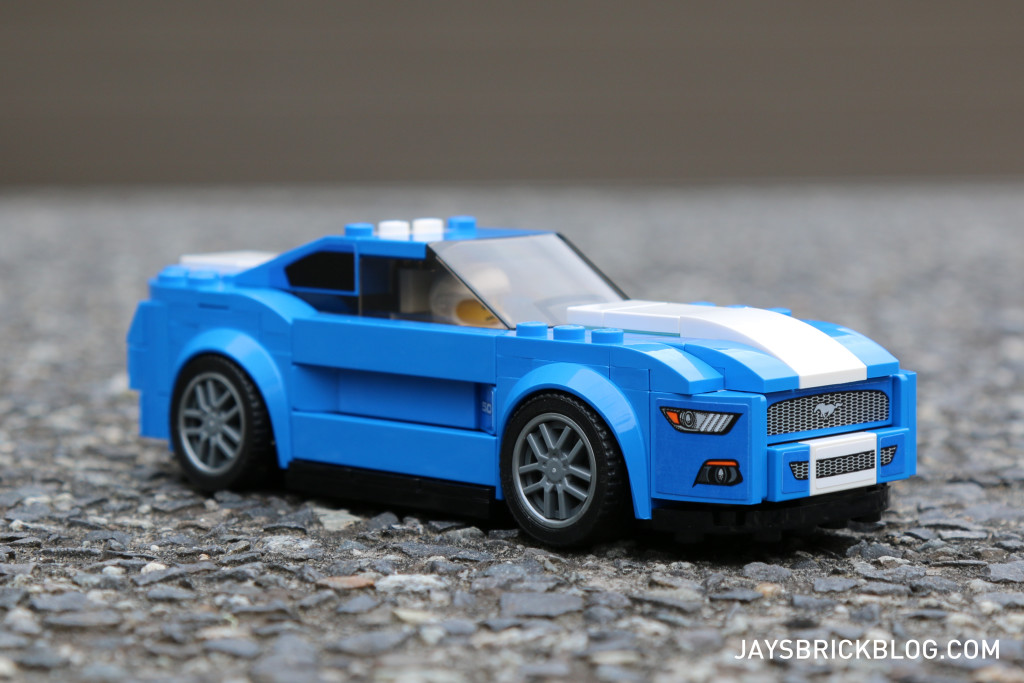 Here’s another view of the Ford Mustang from the front, where you get a better view of the tyre rims. I opted for the star-shaped 5-spoke rims. 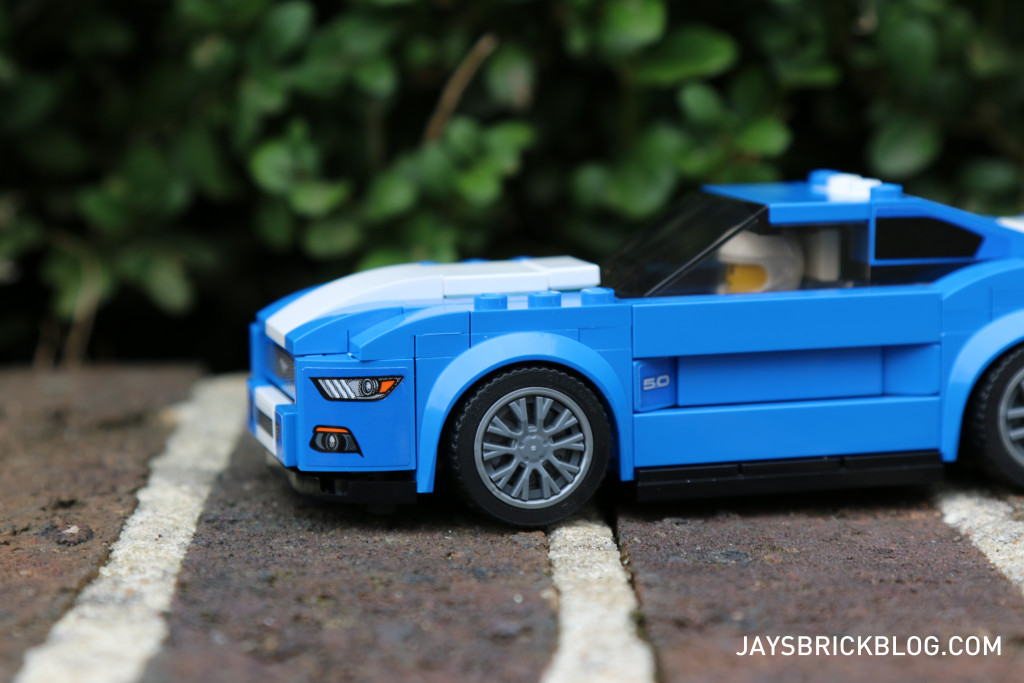 Like most Speed Champions cars (I think – as I don’t own them all), the set comes with a spare set of rims that you can switch out if you please. The other set of rims have 7 spokes that split into two prongs at the ends. It’s a small bit of detail, but I like that you have the option to customise them as you wish – a great nod to car culture and personalising the look of your ride. 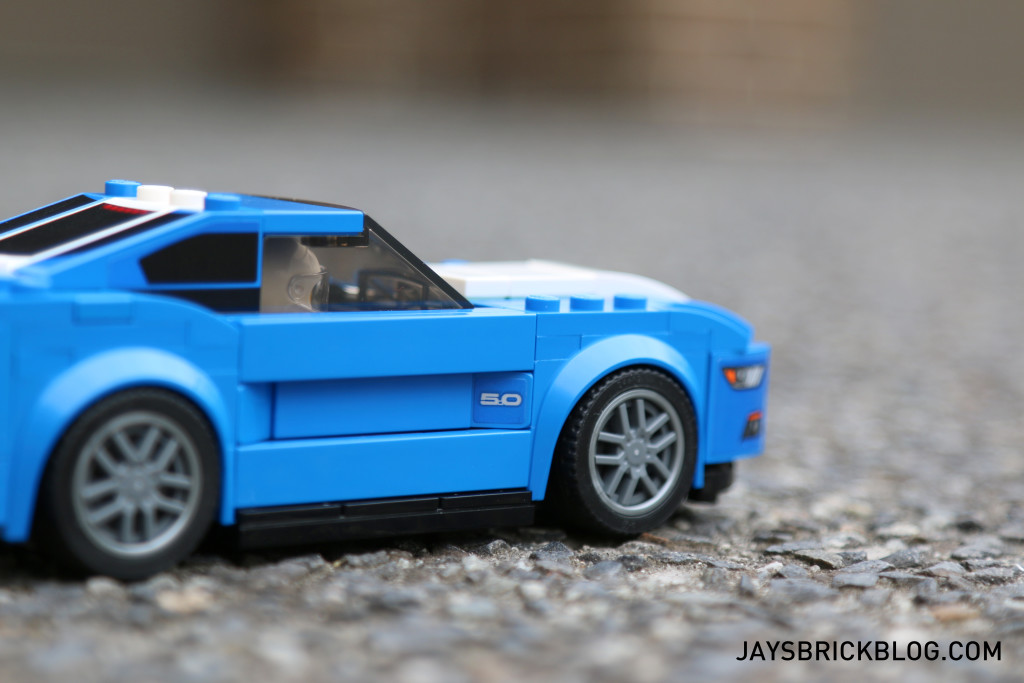 Another feature that I’m glad made it into the LEGO set are the two sets of 5.0 emblems on each side of the car to show off and let everyone on the road know that the Mustang GT is rocking a 5.0 litre engine. It’s a sticker applied to a cheese slope which was a HUGE pain to get right. Bad luck if you have larger fingers as this was no easy task.

Here’s a look at the LEGO Ford Mustang GT’s side profile. I really like how clean it looks and I have to say, despite the blocky nature of LEGO, it really gets the sleek look right. Check out the comparison to the real car. 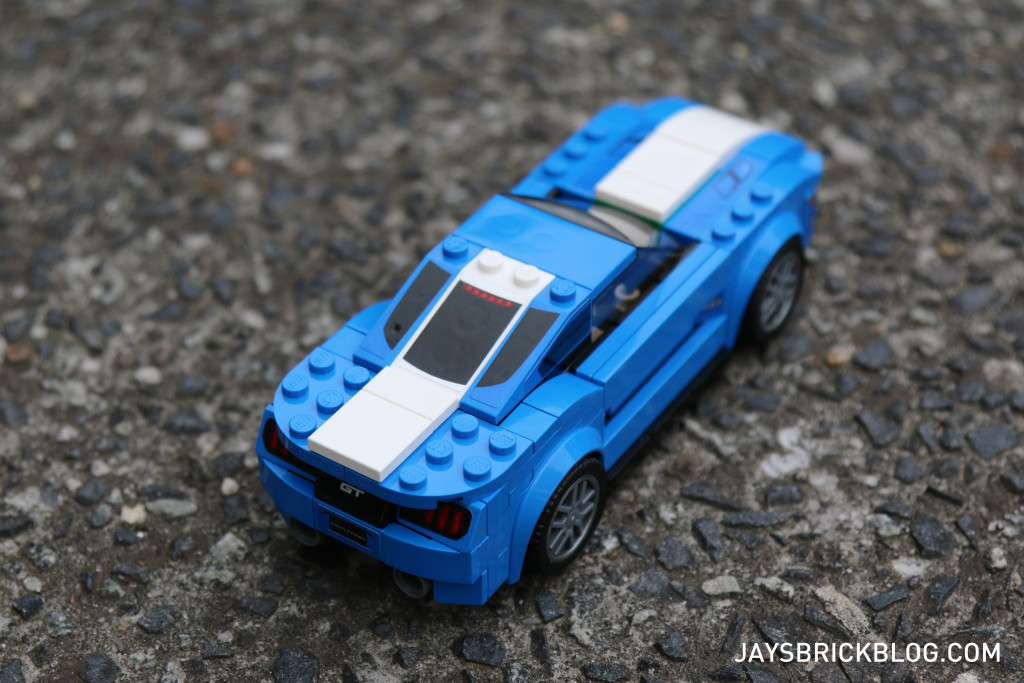 Let’s check out how the car looks like from the back. I’m not a fan of the spoiler as it juts out quite awkwardly from the rest of the car and the exposed studs kind of distract from the otherwise smooth look of the Mustang.

The back glass window is a stickered piece and I kinda messed up the application as they’re not as aligned as well as it should’ve been. 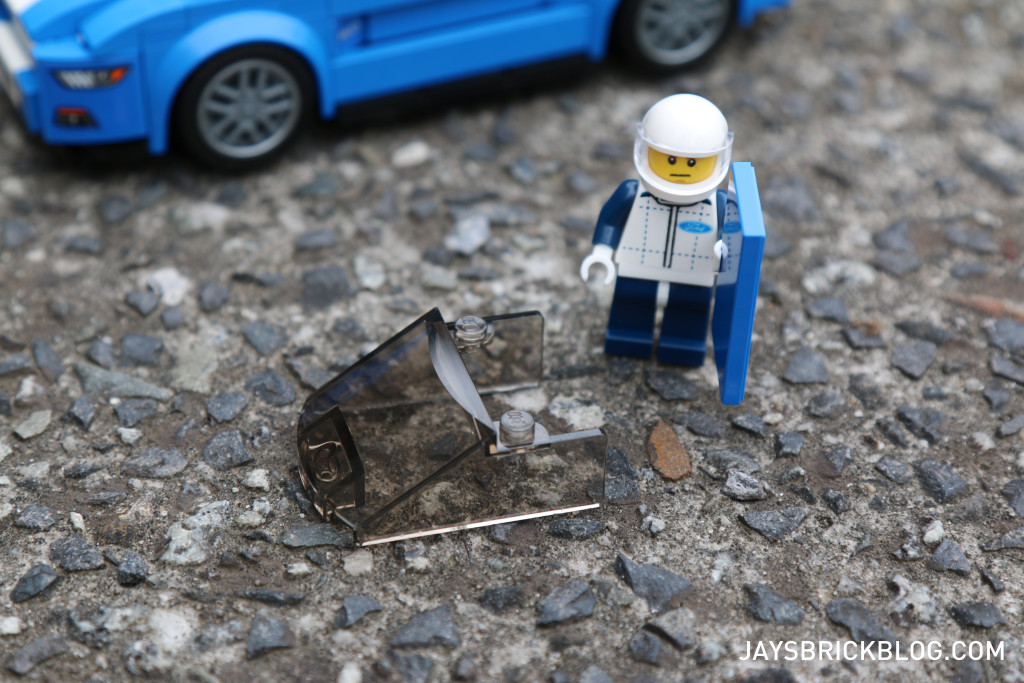 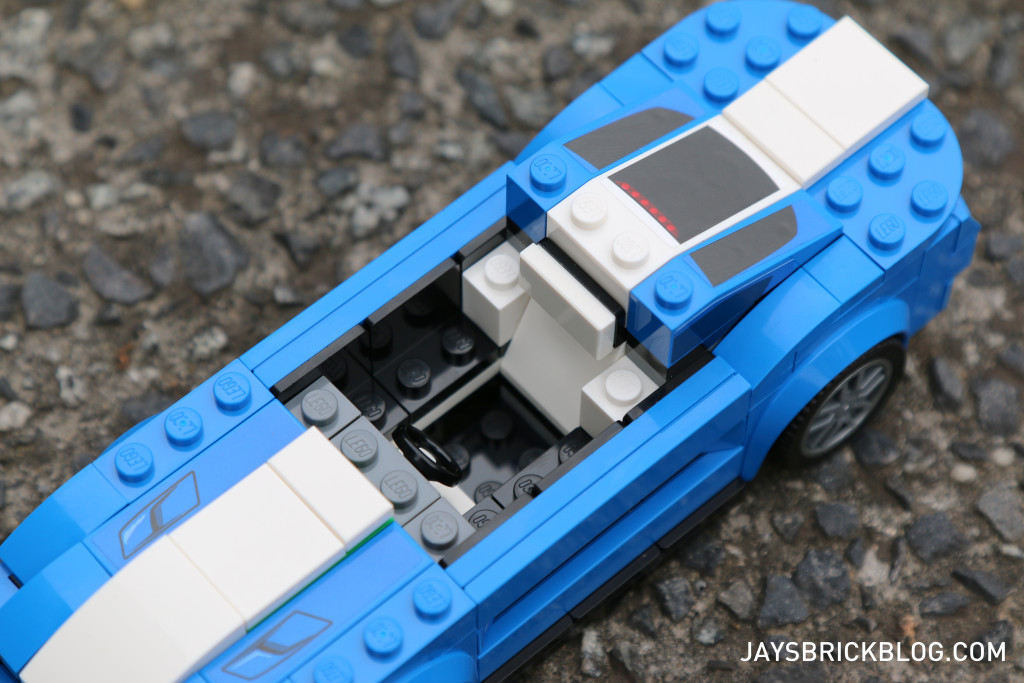 The interiors are pretty bare, just a steering wheel and a bucket seat. I do like how they’ve created the bucket seat out of a slope and tile combo which gives it a look unlike any other car. Glad they didn’t go with regular LEGO chairs for this one! 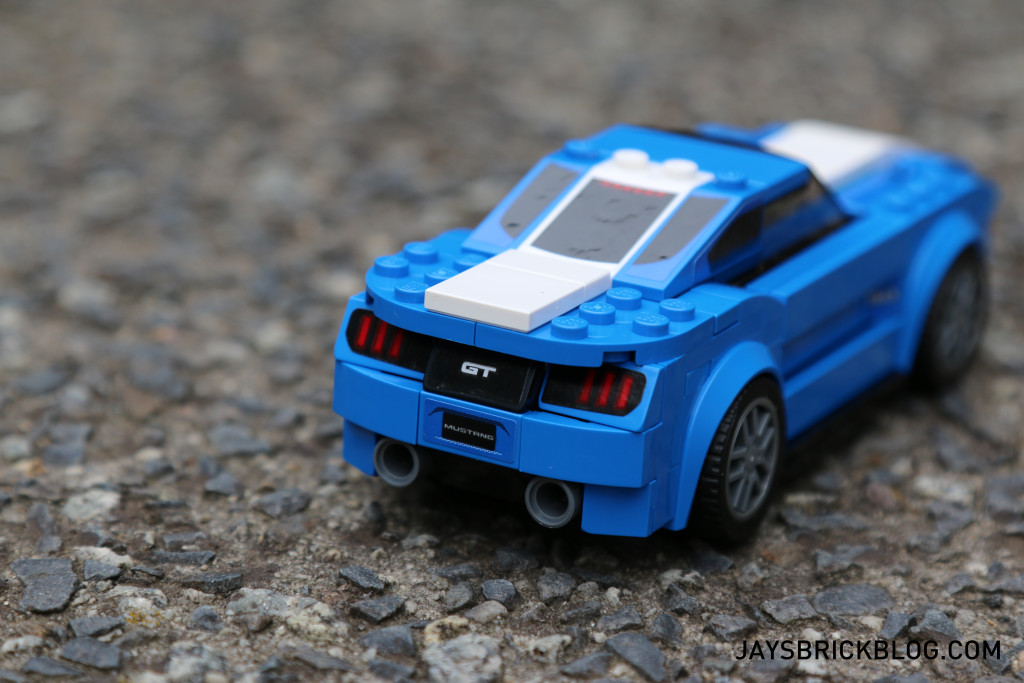 I’ve saved the best part of the car for last – the back. The stickers for the Mustang’s rear headlights are absolutely spot-on. This, in my honest opinion is one of the best cosmetic features of the Ford Mustang GT and is just done right. There are some other great details such as the Mustang nameplate which is a little too tiny for my tastes.

The GT (Gran Turismo/Grand Touring) emblem on the back is also quite prominent and true to the original vehicles’ look. Rounding out everything else are the relatively massive twin exhaust pipes which give it a very beasty vibe. 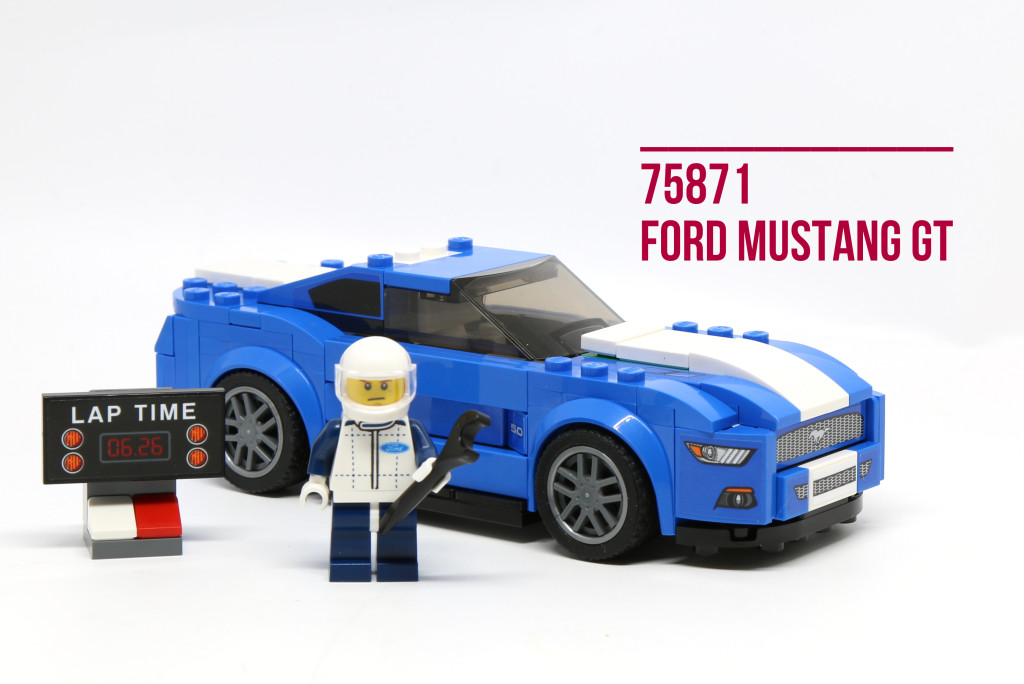 Final thoughts: For a small AU$20-ish dollar set, the Ford Mustang GT is yet another winner in the Speed Champions garage. For automotive enthusiasts, Ford’s entry into Speed Champions should be very well received – what with the iconic carmaker being responsible for commercial cars and all that.

The Ford Mustang GT, while being a very sexy and beasty car in the real world survives the harrowing transition to LEGO 6-stud car, with most of its defining features intact.

Sure, most of the Mustang’s most recognisable features are achieved using stickers but as the Speed Champions theme is generally aimed at the older crowd, most Adult LEGO fans shouldn’t have much issue applying the 20 or so stickers to the car.

The iconic blue colour scheme complete with white racing stripe isn’t particularly accurate to the 2016 Ford Mustang GT (I think) but it succeeds in paying homage to Ford’s motor-racing heritage.

I do wonder what it would look like if dark blue elements (which are pretty rare) was used instead of the regular blue, as that would’ve been much closer to the iconic Ford dark blue. That said, it does look pretty close to the newer Shelby Mustang blues.

The only thing I don’t quite like about the car is the back spoiler section which sticks out a bit too much and the fact that the car feels a little too long. It’s not very noticeable, but when I hold it in my hand, it just feels a stud or two too long – although that could be due to the shorter windscreen and the white racing stripe adding to the effect.

For motor-racing and Ford fans, the LEGO Ford Mustang GT is a must-buy simply because of this marks the debut of American muscle cars into Speed Champions and the very fact that as a model, it’s instantly recognisable. At AU$23 and US$15, it’s also great value for a set that can instantly find a place on an adult collector’s display shelf.

Unfortunately, at time of writing, the Ford Mustang GT (and the rest of the 2016 Speed Champions sets) aren’t available in Australian retail stores so your only option to pick it up would be to buy it online or wait till June till it gets released.

Thanks so much for reading this short review. Be sure to drop subscribe (in the right sidebar) with your email address if you’d like instant updates of new posts, or you can always like my Facebook page for the latest posts.

Are you a fan of the Speed Champions sets? Let me know your favourite car/set in the theme so far and if you’re liking the 2016 wave so far!