Following on from my Expecto Patronum review, I decided to build and review another small 2019 Harry Potter set, this time from the third, mini-wave that hit store shelves early this month.

75965 The Rise of Voldemort can be considered a remake of one of the most sought-after LEGO Harry Potter sets – 4706 Graveyard Duel, which included a Glow-in-The-Dark Voldemort and Peter Pettigrew minifigure.

This scene/chapter entitled Flesh, Blood and Bone is the turning point in the series, where Harry Potter takes a decidedly darker turn, and the stakes are raised even higher as Voldemort is resurrected, and Harry comes face to face with his nemesis.

Let’s see if this set lives up to the hype of the scene which you can relive on Youtube. 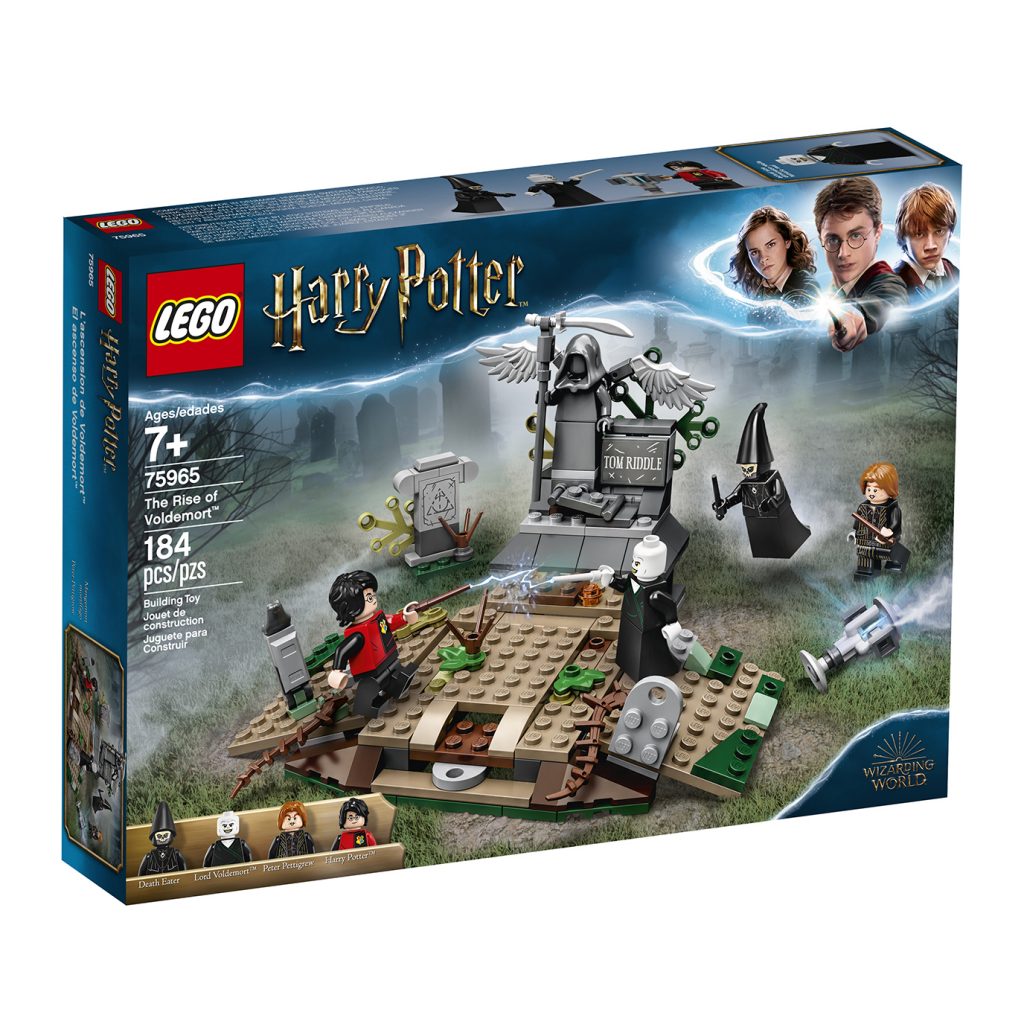 For one thing, I really like small sets like Rise of Voldemort – they’re quick, easy builds that I can usually smash out on a weeknight as I’m watching TV or just recharging from the work-day, and I find that these sets usually contain pretty great value. 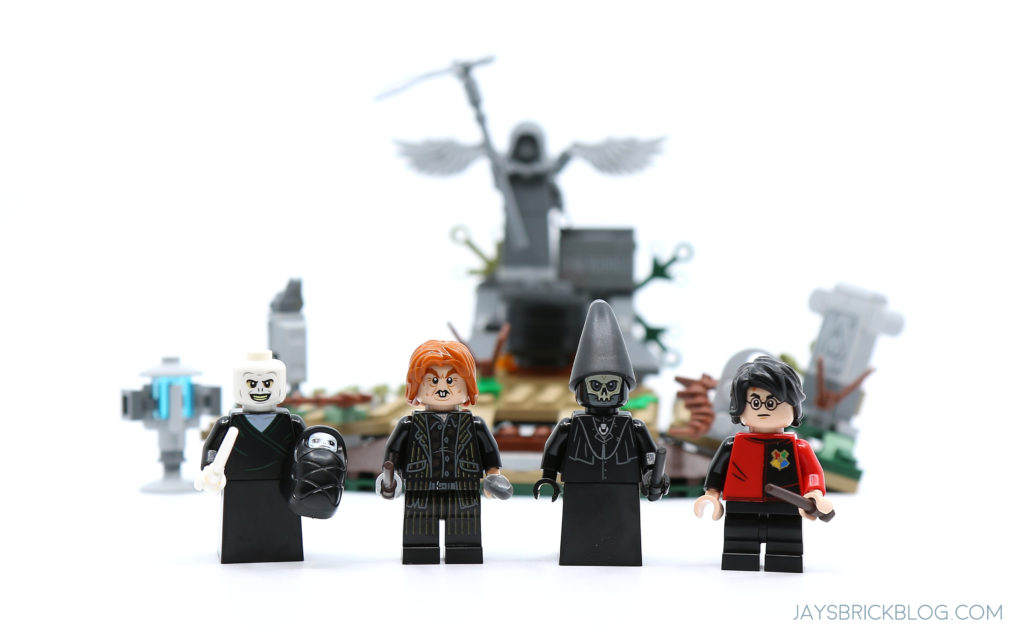 Small sets are unsurprisingly minifig-centric, and the Rise of Voldemort includes 4 (5, if you include the Angel of Death) minifigures that will delight any Potterheard.

The set comes with Voldemort (who is cradling his own feeble baby form), Peter Pettigrew aka Wormtail, an anonymous Death Eater, and Harry Potter in his Triwizard Cup outfit.

It’s a who’s who of Harry Potter, and fans will especially be delighted with the Peter Pettigrew minifigure, as this is only his third appearance as a minifigure and has been a relatively rare character. 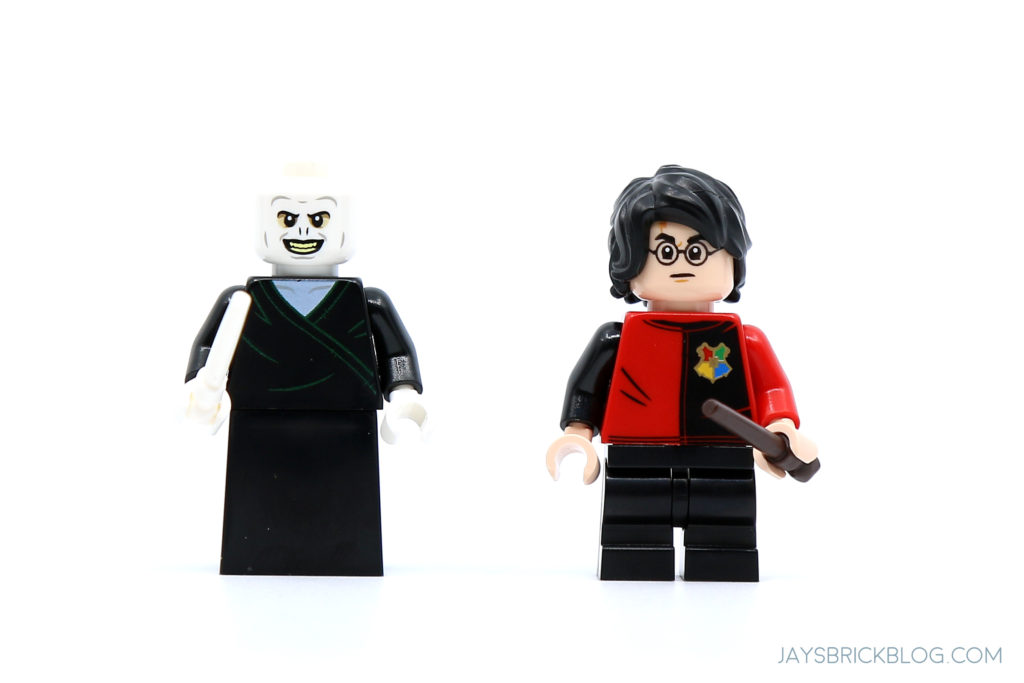 Here’s a look at Harry and Voldemort minifigures. Voldemort has a massive grin on his face, which you can expect as he’s probably delighted that he doesn’t have to spend his life as a gross baby cradled by Wormtail everywhere he goes.

His robes are black, with a hint of green around the edges, and he comes with the new curved slope dress piece for his legs. The robes are much darker than the ones from the Harry Potter & Fantastic Beasts series. 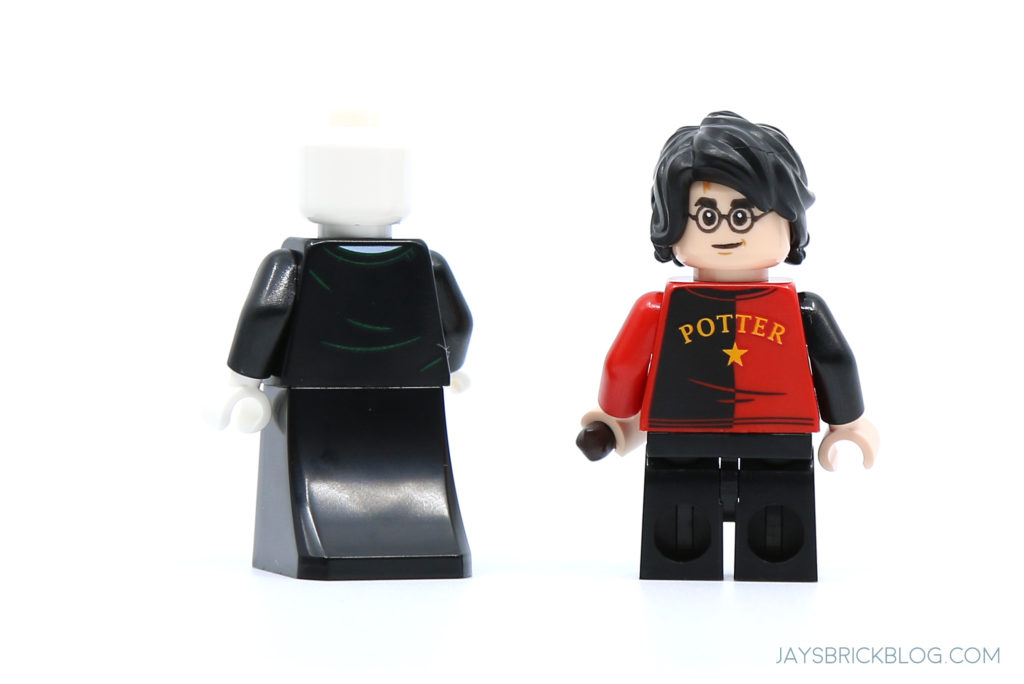 Harry has his Triwizard robes on, which are red to represent Gryffindor and has his last name printed on the back. I was most surprised to see a brand new hairpiece included on him.

It’s not a brand new piece, but a black version of a hairpiece commonly worn by Ninjago’s Lloyd, suggesting that he’s lost exclusive rights to this hairstyle. The tousled hair with the side park works remarkably well on Harry, and I love the texture and how messy it looks.

Harry has two expressions, a small smile and a neutral face. It’s weird, but I would’ve much preferred a look of agony, or even a determined angry look as it doesn’t really match the context of the scene. 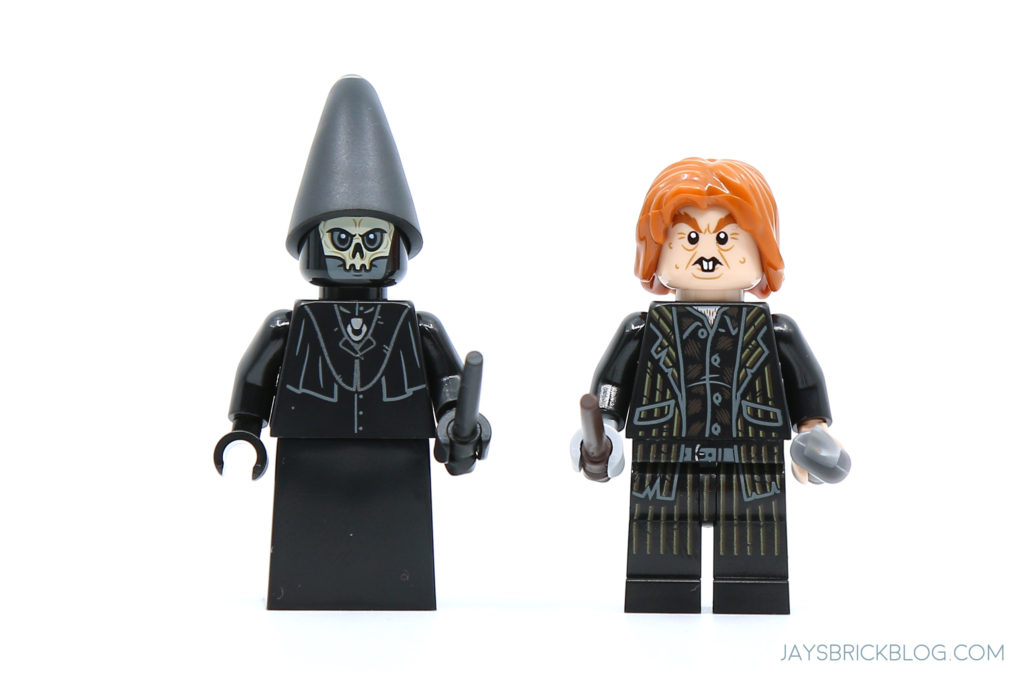 More interestingly, here’s a look at the Death Eater and Peter Pettigrew, which are the real drawcards of the set.

Peter Pettigrew or Wormtail as he’s known within the Marauders, is impressively movie-accurate.

I’m taken-aback at how well the graphic designers managed to get his facial features, especially his buck-teeth and ratty-look, down to the pimples and warts on his face. 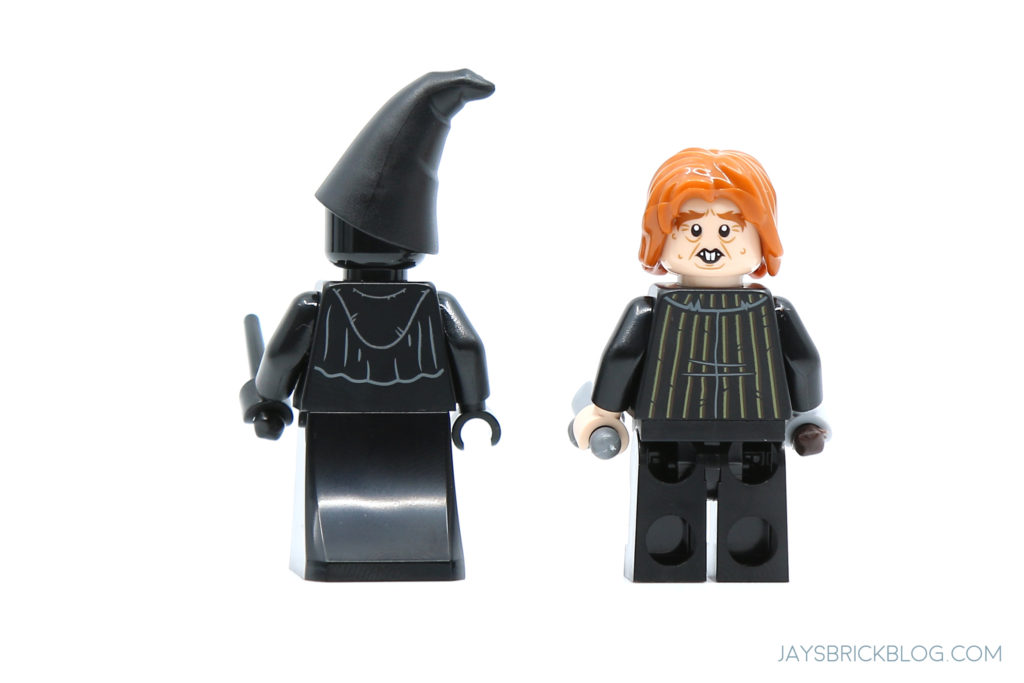 Here’s a look at their back prints, as well as a better look at the Death Eater’s wizard hats.

Peter has an alternate face, which has a worried look on his face. I also really like how detailed Peter’s pinstriped suit is, but it’s a shame that he doesn’t have any arm-printing.

Another cool nod to the scene is Peter’s silver hand – he chops of his own hand as one of the ingredients in the Voldemort soup to bring him back to life, and Voldie rewards him by magicking a shiny new silver hand for his troubles. 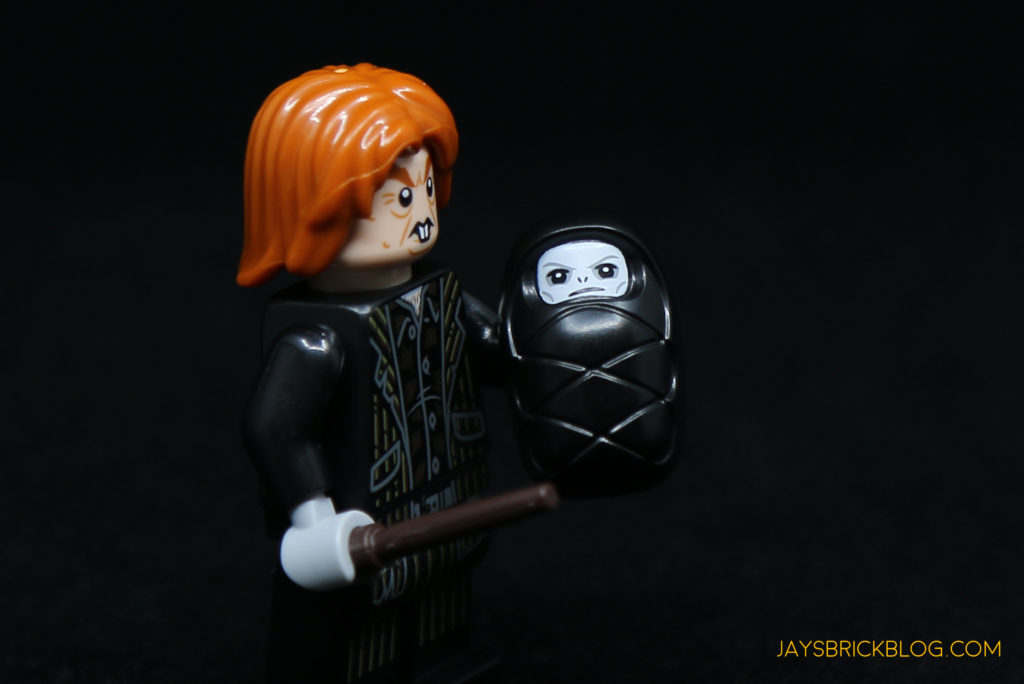 It’s not a minifigure per se, but here’s a look at Baby Voldemort, which is just the most adorable thing ever in his black swaddle. I’m so glad the designers went the extra mile to print Voldemort’s face in such crisp detail on the baby mould. 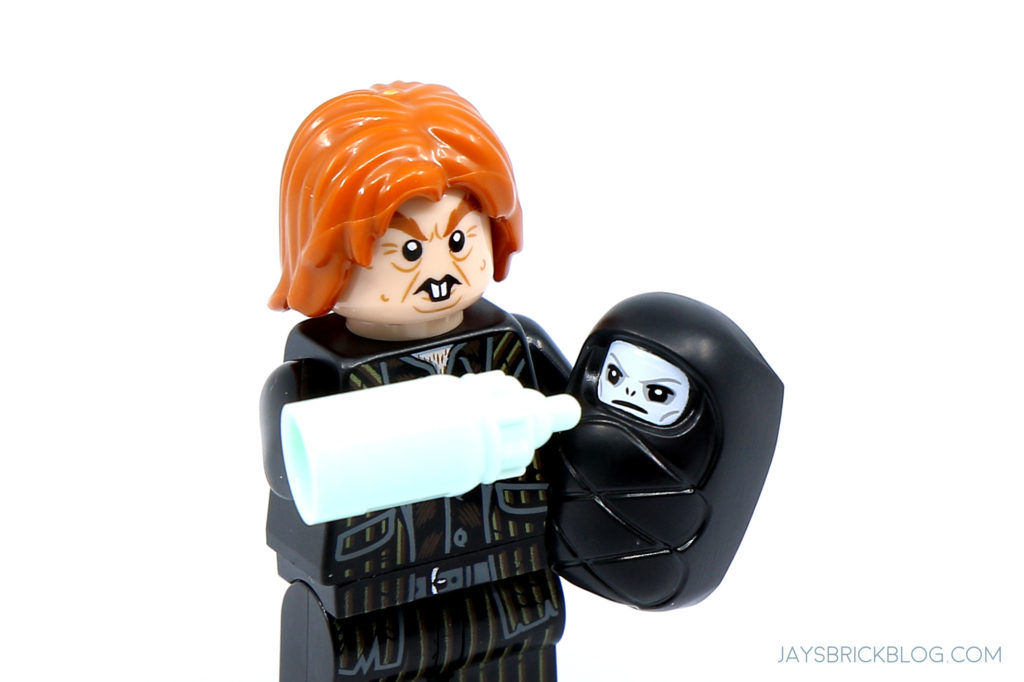 This does beg the question – how much did Wormtail have to care for Baby Voldemort? Did he have to clean up after Voldemort goes Number 1 and 2? Do Wizards even have nappies?

Did Wormtail have to swaddle and tuck in Baby Voldie in bed each night? 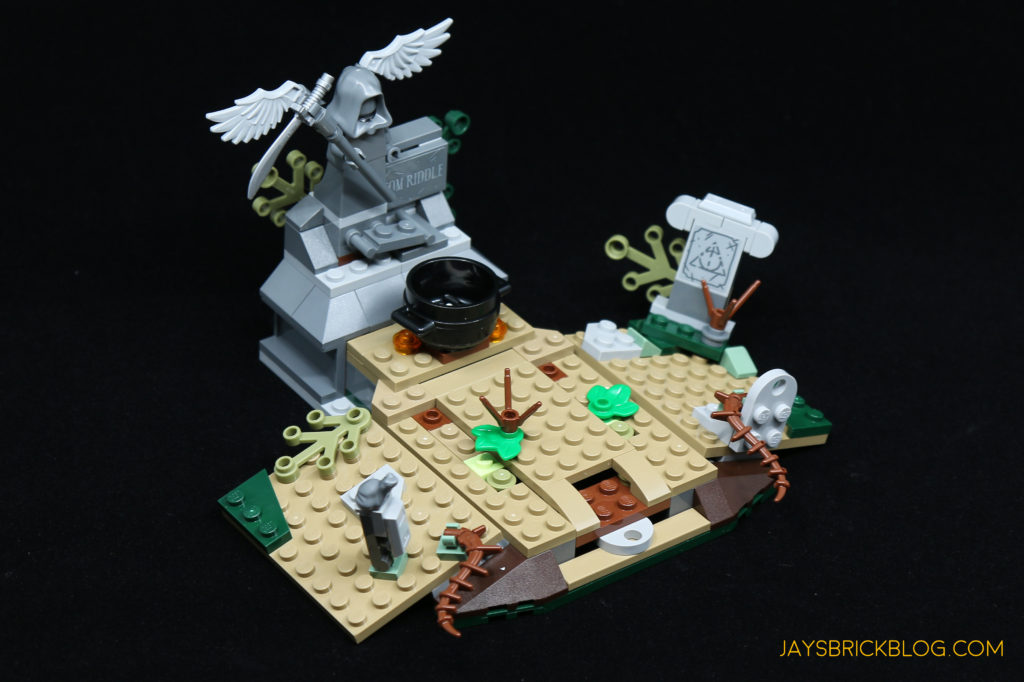 Here’s a look at the completed set, a small slice of the Little Hangleton graveyard, which was the ancestral village of the Riddle family.

While small, I love how self-contained it is and all the little design flourishes added to it. From this view, you can see that the entire graveyard scene isn’t completely flat – the edges of the graveyard can be angled downwards to give the scene a more three-dimensional uneven look.

The Triwizard cup, which is actually a portkey is also included in the set, to fully enable you to re-enact the scene where Harry and Cedric Diggory are teleported to the graveyard. 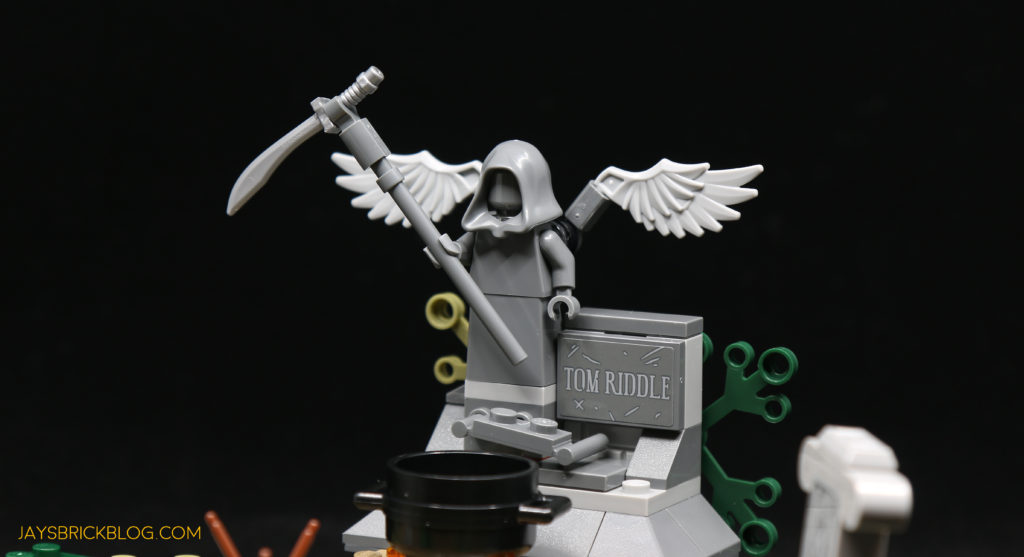 The Angel of Death statue is by far the best feature of the entire build, and also movie-accurate as Peter charmed the statue to hold Harry in place while he performs the ritual to resurrect the Dark Lord.

The statue can be considered its own minifigure, and is mostly mono-chromatic save for the lighter wings, and I love how well the scythe looks. Besides the statue is a stickered tile with the name “Tom Riddle”. 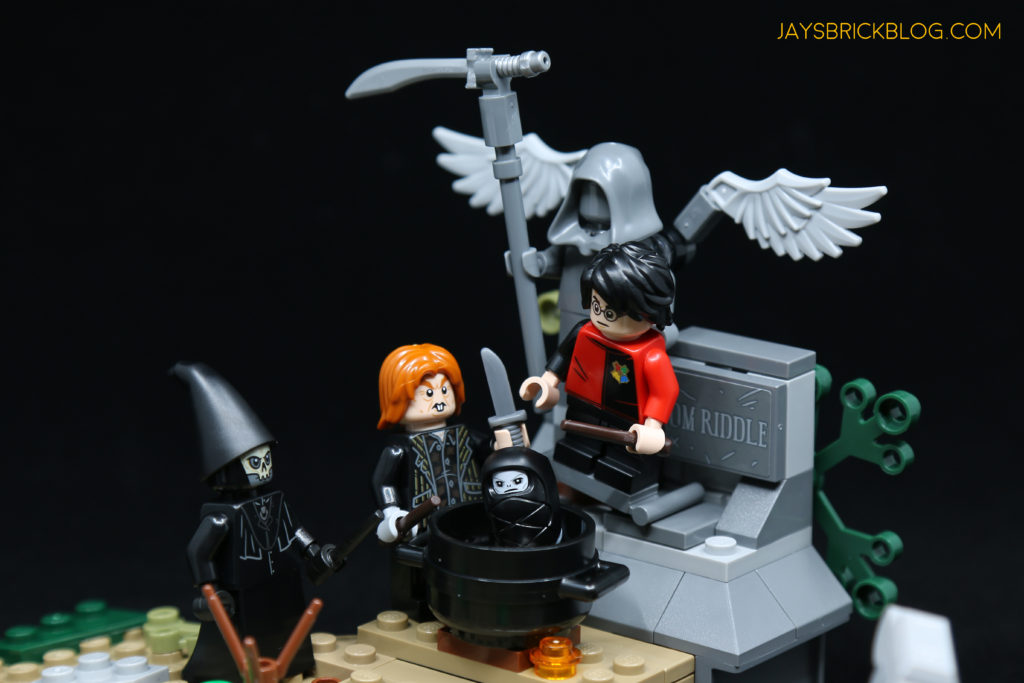 There’s a pedestal for Harry to be placed on, but unfortunately, you can’t really lock Harry in with the Scythe due to the limitations of LEGO, but it does a decent job of allowing you to re-create this pivotal moment where Peter draws blood from Harry. 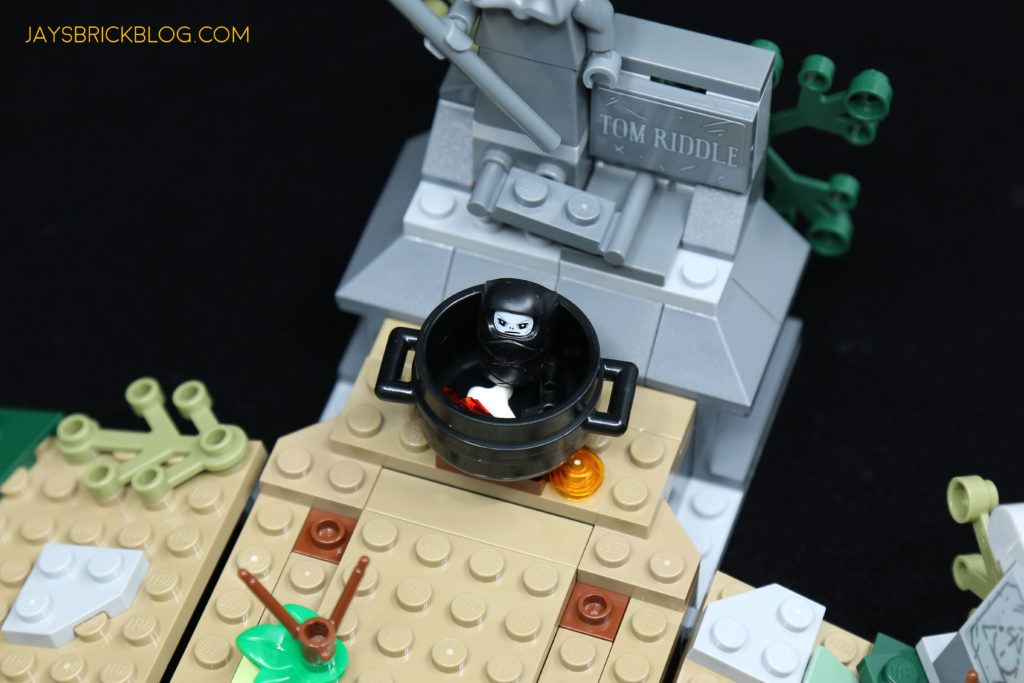 A cauldron is included to re-enact how Voldemort is brought back.

In it are all the ingredients needed to bring the Dark Lord back, as per the line from the book – a piece of bone, baby Voldemort, a trans-red bulb representing Harry’s blood and a black hook-piece that’s meant to be Peter’s hand.

This is a bit of a miss, but LEGO should’ve just included a minifigure hand in the cauldron for accuracy. 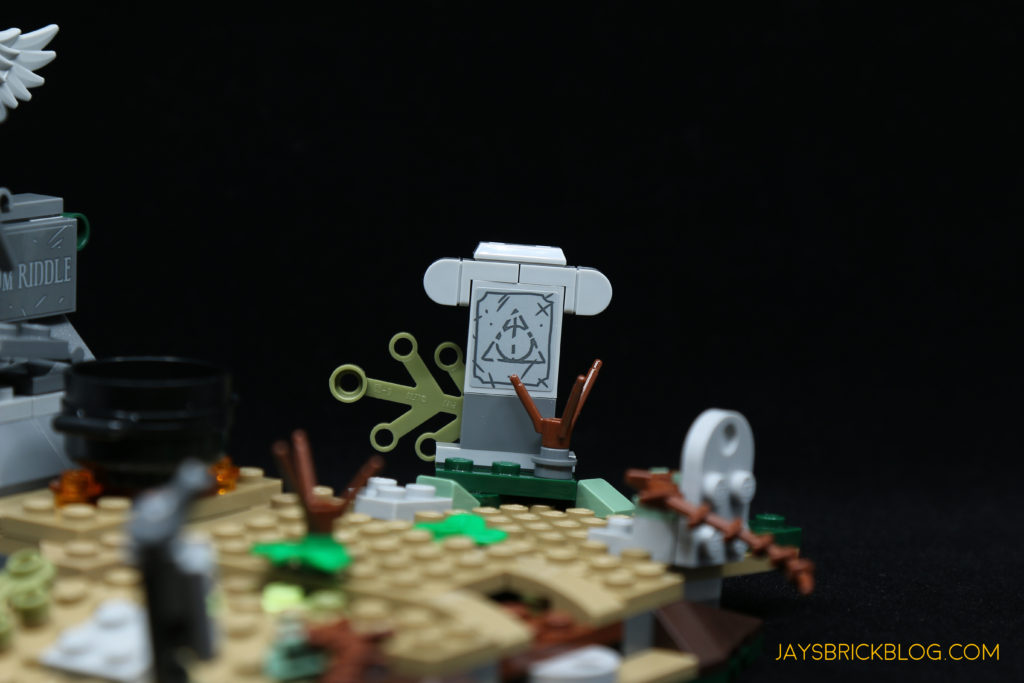 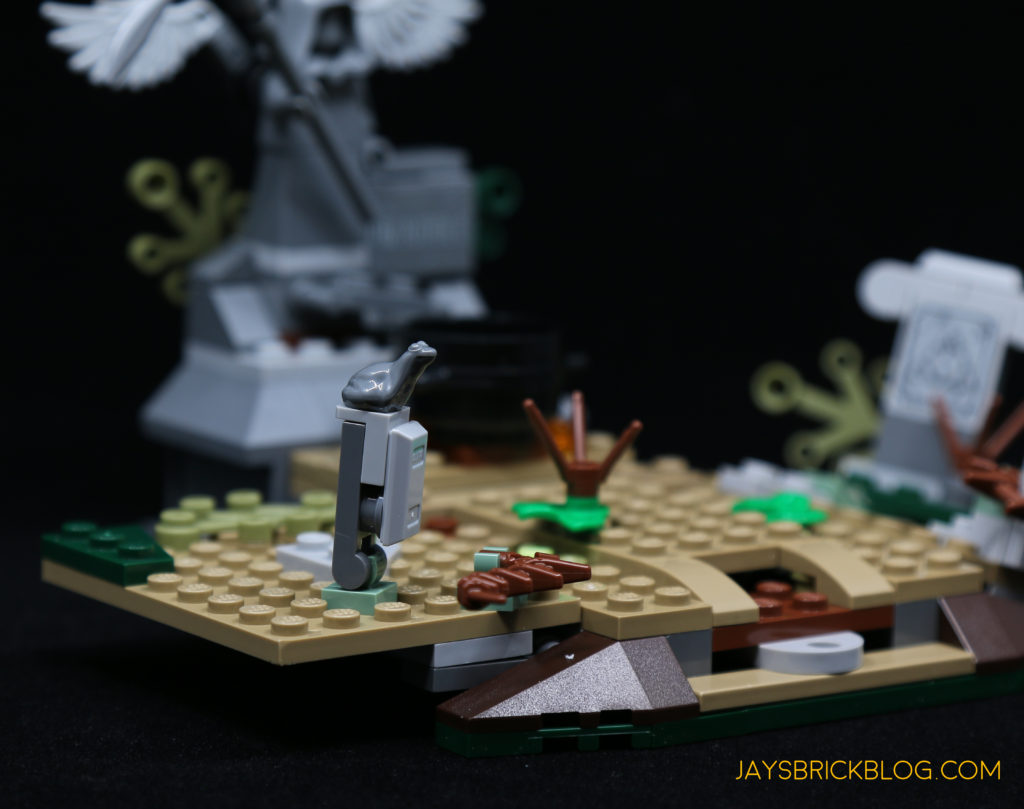 It being a graveyard, the model is littered with headstones, including one that bears the symbol of the Deathly Hallows. 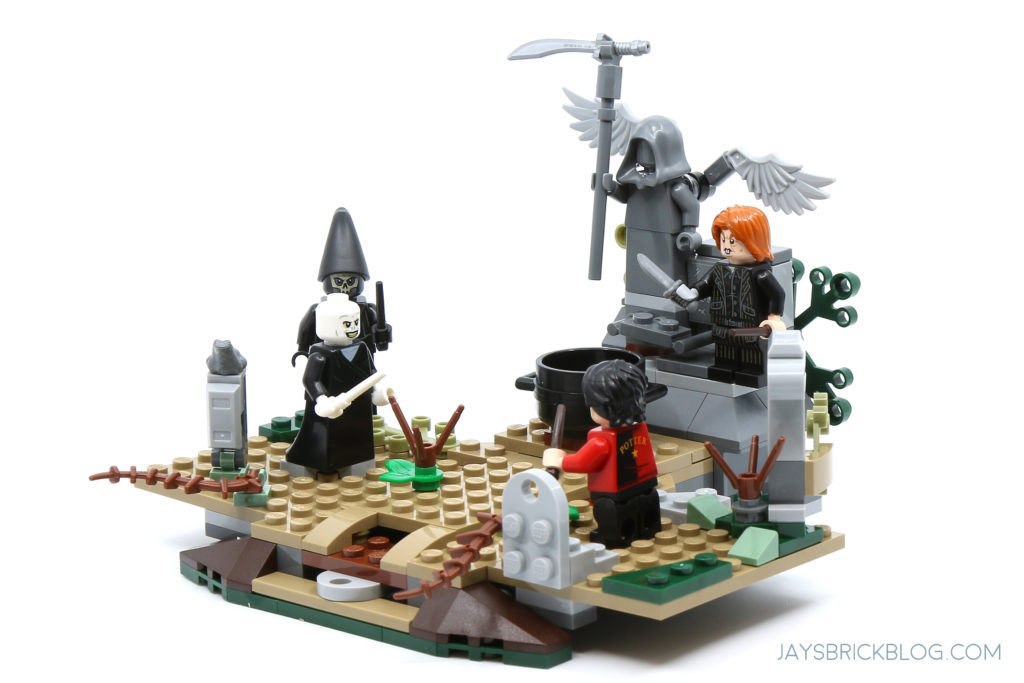 You can set up the Graveyard duel to be on flat land, but adjust the sides to give it a bit of a dynamic look, to create the effect that the ground is shifting and turning with the duel.

Finally, as per the set’s name, here’s a look at the play feature, which lets you “raise Voldemort up” to make it look like he appears out of thin air.

It’s a fairly inoffensive play feature, and I like that it has relevance to the context of the scene and actually improves on the overall build. 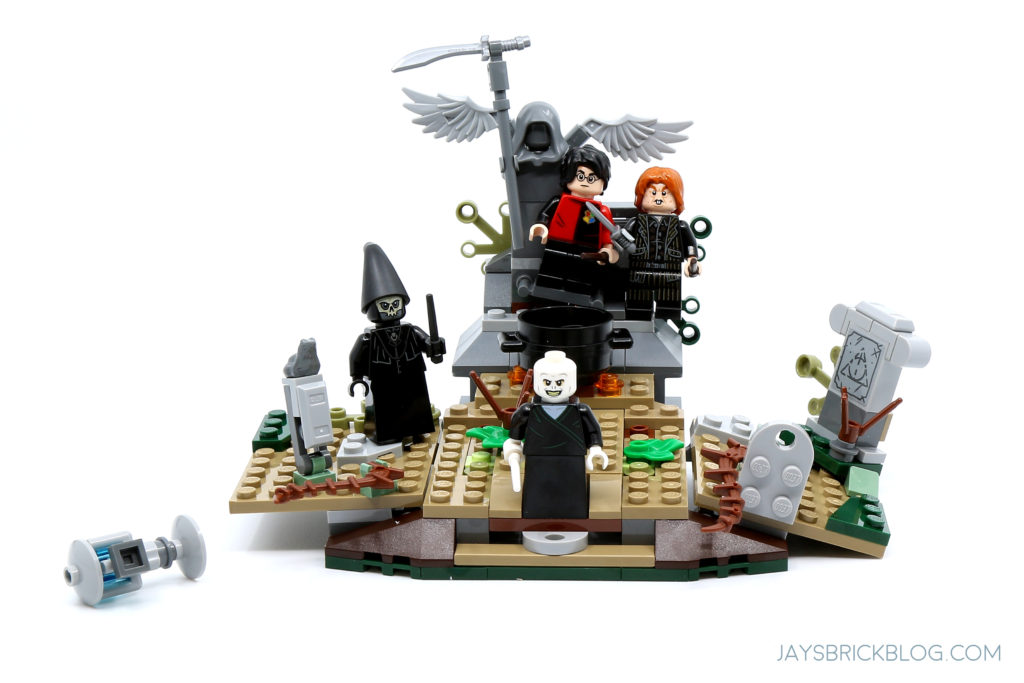 Final thoughts: Like Expecto Patronum, this is yet another easy set to like. Strangely, despite the US and UK price being unchanged, this set costs AU$5 more in Australia, possibly due to the worsening Aussie Dollar, but for all intents and purposes, I consider them both to be at the same price-bracket in a global context.

The minifigures included are fantastic, with absolutely no filler. Voldemort and Harry Potter are necessary inclusions, and the new hairpiece for Harry was a pleasant surprise.

The stars of the set are the Death Eater, which makes amazing use of the Wizard’s hat in black, and the long-awaited return of a Peter Pettigrew minifigure.

The Death Eater is really cool, and I’d love a couple more of them to serve as Voldemort’s army, and I was very impressed with just how detailed and accurate they managed to get Wormtail’s minifigure.

The set itself is great, and all that you can ask from a small set. The self-contained graveyard makes for a great diorama that can easily be displayed without taking up much space.

It’s really hard to find any points of criticism for this set – the obvious one to point out is the lack of a Cedric Diggory minifigure especially since his presence is pivotal to the scene, but the minifigure is relatively easy to source from the Harry Potter Minifigure Series and if you’re a fan, it’s quite likely that you already have him in your collection.

Adding Cedric Diggory to the set makes it complete, but I understand his omission to keep the price low, especially since it’s already bursting at the seams with great minifigures.

This is a fantastic set that’s very easy to recommend for LEGO Harry Potter fans.

Even at full-price, it packs amazing value, and with LEGO retailers being quite aggressive at discounting sets (it’s on sale on Amazon constantly), getting it on sale makes it an even better deal.

Thanks for reading! Hope you enjoyed this relatively short review. I’m keen to check out some of the other LEGO Harry Potter sets from this year, but with so many amazing LEGO sets now on the market, I’ll try my best to squeeze one or two more in.

75965 The Rise of Voldemort is now available from LEGO.com or Amazon Australia.

As always, be sure to let me know what you think of this set down in the comments!

Role models are important. Thank you @lego for su