There isn’t really much to say about this set. It’s the smallest set in 2014‘s first wave of Marvel Super Heroes sets and features the gazillionth Spider-man minifigure.

I only happened to purchase this set due to a bit of good fortune. When I was in Myer Melbourne CBD, i chanced upon a box torn in half lying on the shelves. Upon further inspection, I noticed that the set was fully intact, with all the polybags untouched and nothing else missing. Some kind fellow had ripped open the box for no reason. I checked with a manager and he gave me a 40% discount on the set, which was difficult to pass up as I wouldn’t have bought this set otherwise. 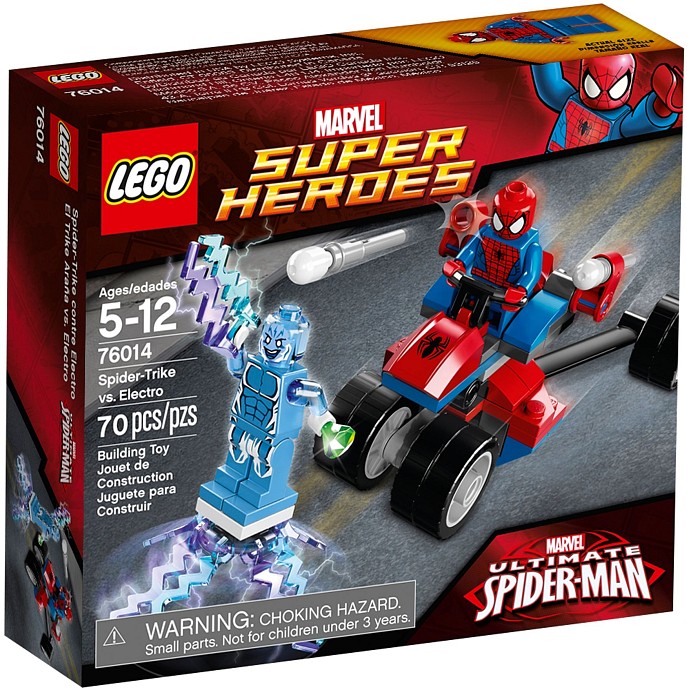 You have to give it to LEGO for timing the release of this set right, launching it alongside one of this year’s most anticipated superhero movies, the Amazing Spiderman 2: Rise of Electro. How convenient that this set also features the titular character himself! Sadly, the way I felt about the set mirrored my opinion of the movie – I was pretty disappointed and I felt that it could’ve been so much more.

I’ll be upfront. The only reason I bought this was because of the Electro minifig, so with that record set straight, let’s get on with the review. 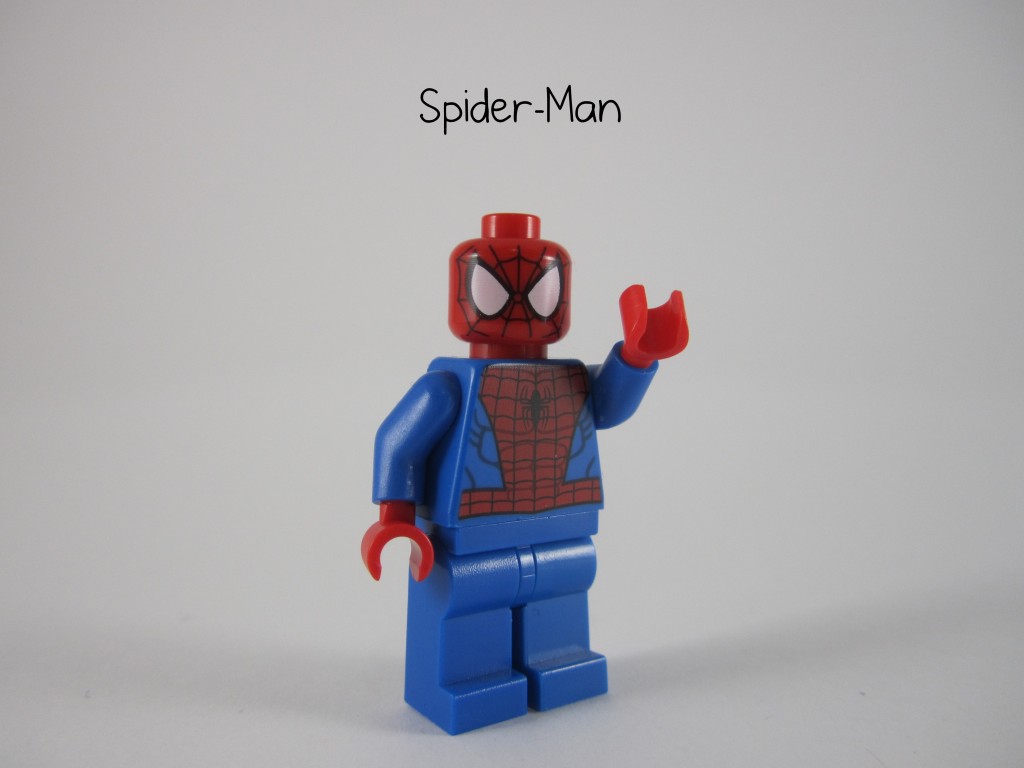 We start with the minifigs and yet another Spider-Man. This is the same Spider-Man minifigure you get in every other Spider-Man set and there’s nothing special about him which is why I put him in a slightly different pose so that he it a little different.

At the very least, update the minifigure or have alternative models like Batman. We get a new Batman in almost every set, but with a different costume each time, it’s actually quite fun collecting them all. 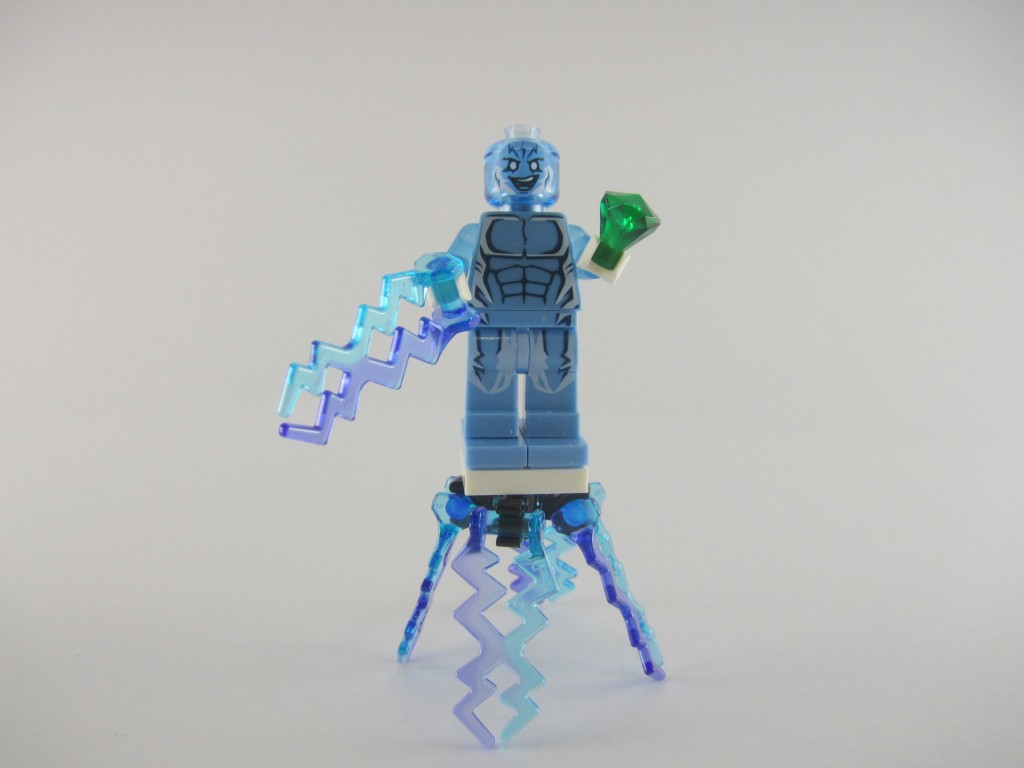 Electro is an electrifying (sorry)  Minifigure and is the main reason why anyone would pick this set up –  unless you have plans to amass an army of Spider-Men. The first things that strike (sorry, I couldn’t resist) you about Electro are his fantastic translucent minifigure elements and the copious amounts of lightning bolts.

Electro has a levitating platform held aloft by electricity, a neat little build that makes his minifigure stand out a lot more. You’re able to spin the bottom part of his platform, to add a little bit of interactivity to the minifigure, which is quite a nice touch. Here’s a GIF of it in action. 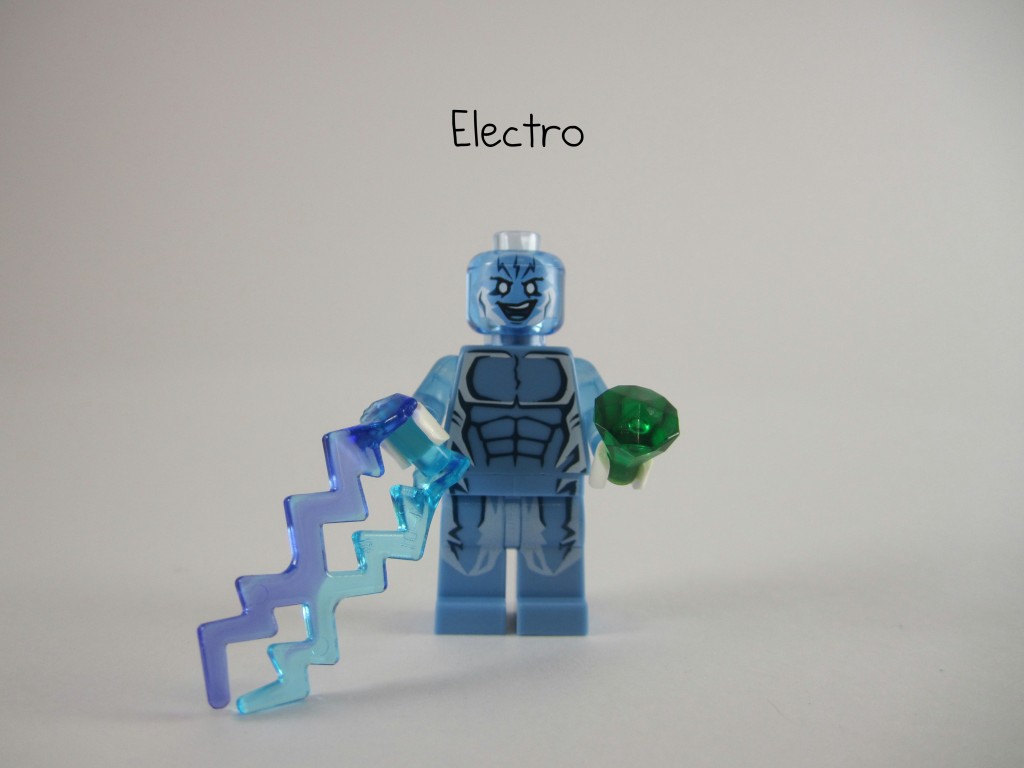 Here’s a better look at Electro sans his floating electricity platform. He comes equipped with a bolt of lightning and a green jewel piece, which he probably stole and is why Spider-Man is hot on his tail trying to recover the precious gem. Electro’s minfigure details are stunning, with a transparent head and arms, a somewhat rare occurrence when it comes to minifigure parts. Unfortunately, his torso and legs are opaque but the light blue colours mixed with white and black accents work extremely well together. Alas, it would’ve been crazy cool if they managed to make his entire body transparent. 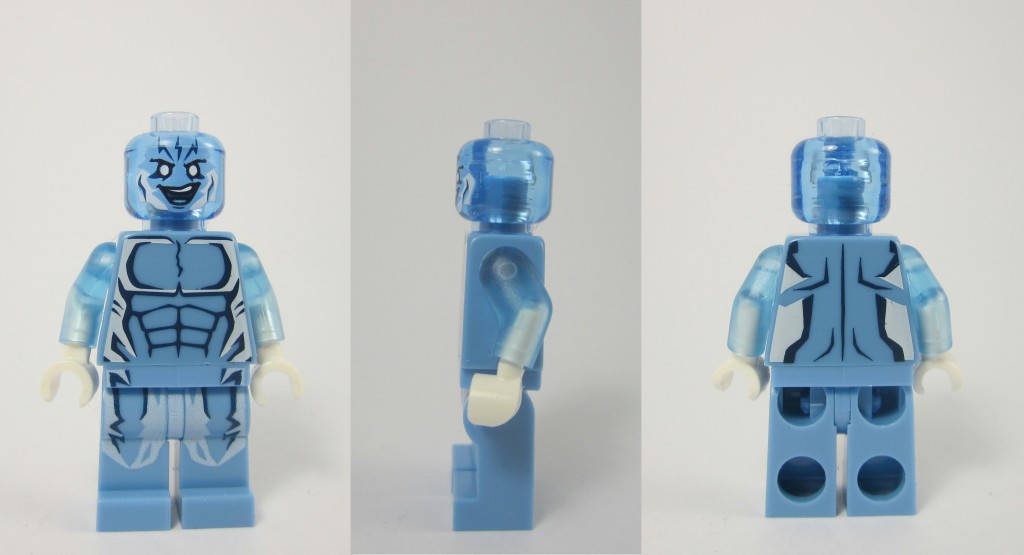 Electro is the reason to buy this set, and I probably don’t need to convince you that he’s a worthwhile addition to any Marvel collection seeing as how his status as a villain has been raised thanks to the recent movie. I must highlight the impressive printing details on his head, which blends seamlessly with the transparent base. While it would’ve been nice to have Electro in his traditional green and yellow colours, this version of Electro is based on the recent Ultimate Spider-Man cartoon series on Disney XD, which helps fans recognize him as he bears a striking resemblance to Jamie Foxx’s character in the summer blockbusters.

I felt it was a little greedy of LEGO to barricade this incredible minifigure behind such a dud of a set overall but hey, they know what it takes to move sets and an ultra exclusive minifigure is definitely one of the more effective ways to do so. 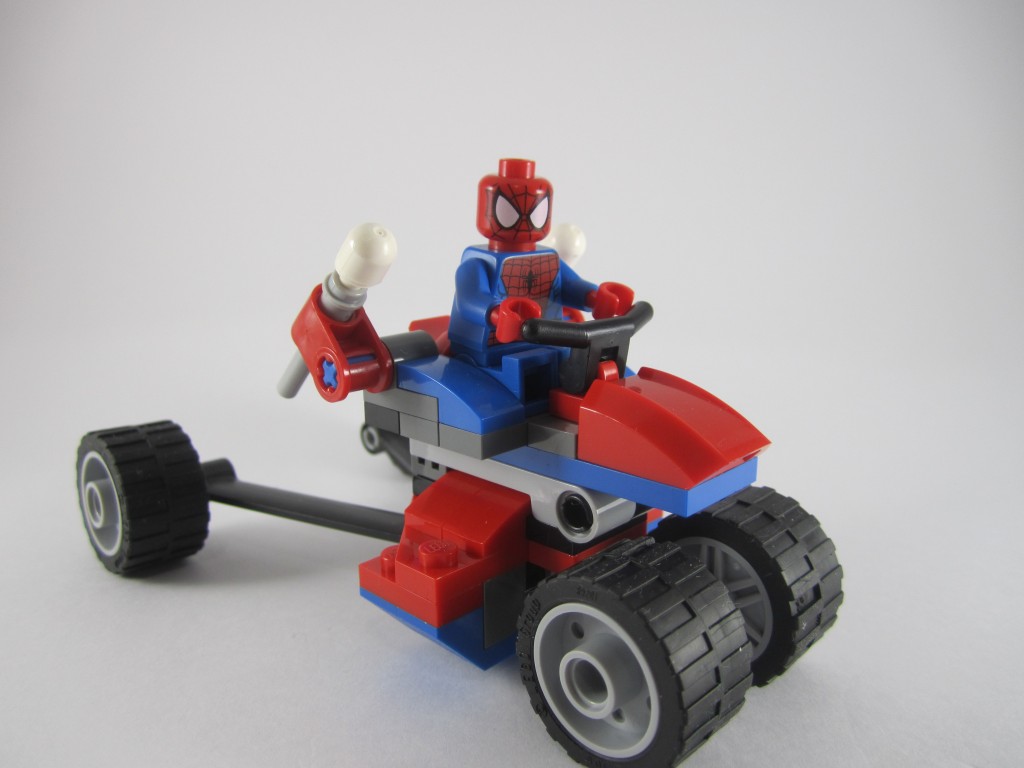 I don’t follow the Ultimate Spider-Man cartoon but it sure seems like Spider-Man is a bit of a vehicle enthusiast. He keeps showing up in different vehicles that you’d think that he got bored of swinging and slinging around New York using his web shooters. For this set, we have him in a trike that doesn’t really look like a trike.

For one thing, his “trike” has 4 wheels, which kinda disqualifies it from being a trike immediately, but since we’re on the topic of a superhero powered by a radioactive spider bite, we can afford to suspend some form of realism I guess.

His trike is quite ugly, and the 2 wheels that jut out precariously behind does little to help the overall aesthetics. Do note that there is supposed to be a sticker with Spidey’s symbol slapped on the front but I happened to misplace it since it was incredibly tiny. I put this set together on a train ride home, so that could be why it got lost… Anyway, the trike has 2 flick fire missiles which helps in balancing out the vehicle. That all sounds fine and dandy till you realise that they are flick fire missiles.

The trike’s flaws are magnified further from behind and would have benefited if the back wheels were slightly larger and raised. The proportions are just awful and this vehicle just feels like a sloppy mess of red, blue and wheels. 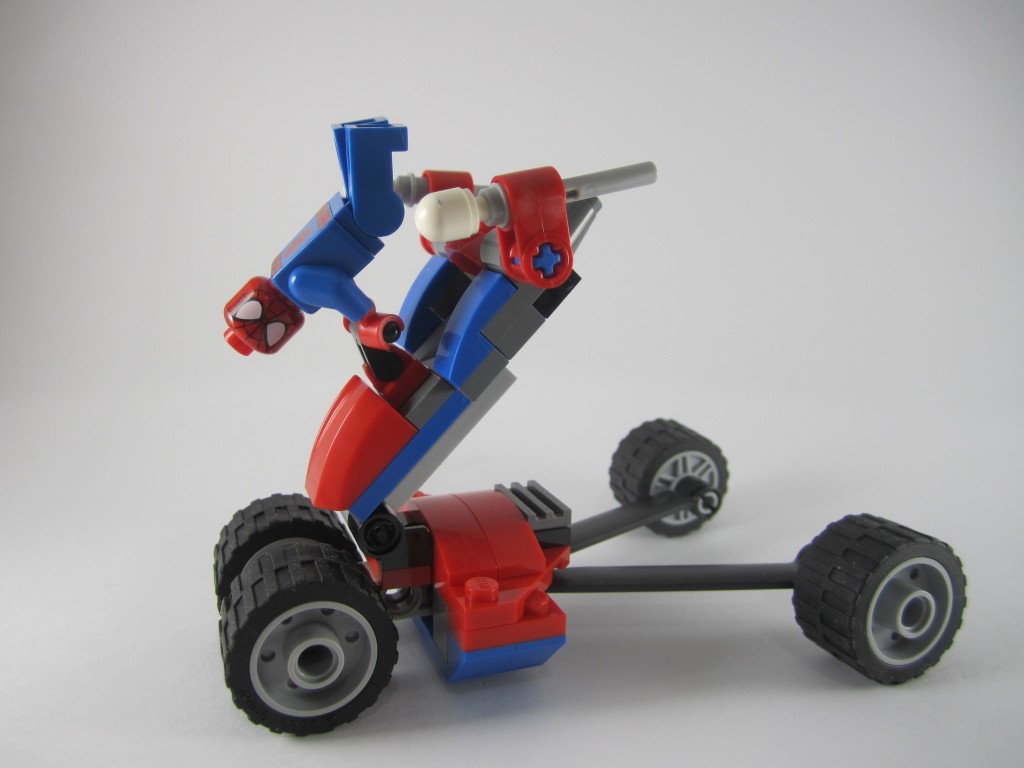 The trike flips open into this “extreme” mode where Spider-Man needs to hang on for dear life (since his seat doesn’t have any studs to hold him down), which is the only entertaining feature of this set. I’m still not sure 100% sure as to what this actually accomplishes other than humorously tossing Spider-Man to his death when he slams on his brakes. 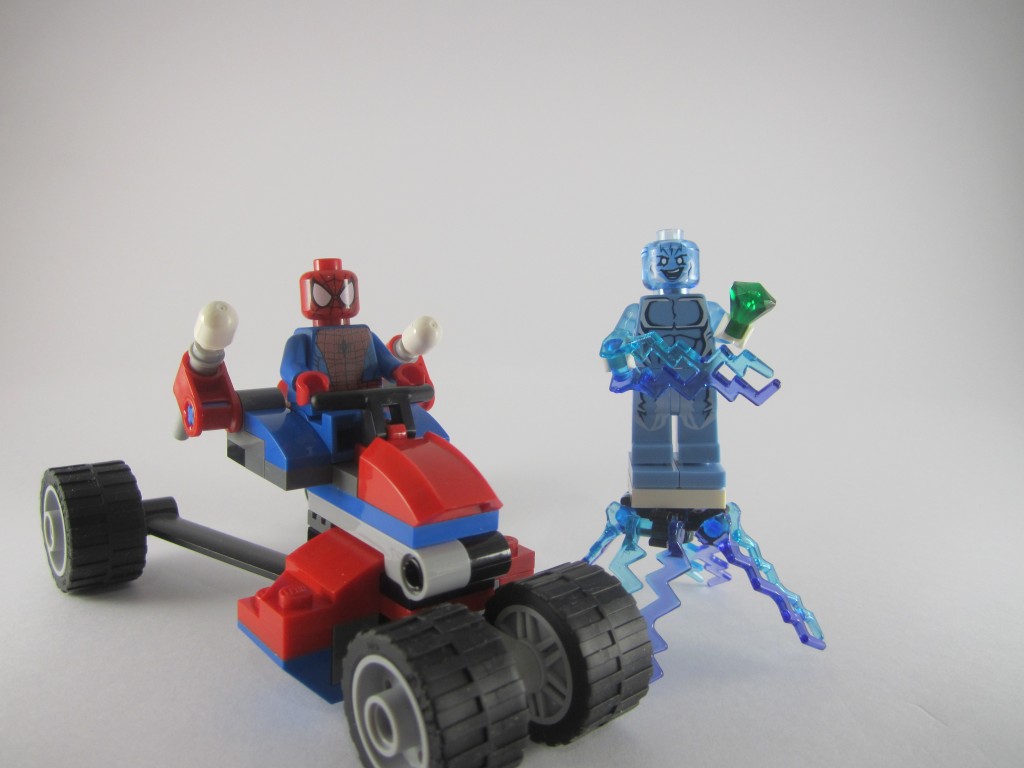 Final Thoughts: I had pretty low expectations going into this set but I still somehow managed to be disappointed by it. The only saving grace of the set is Electro, which stands out as a terrific minifigure, perhaps one of the more memorable ones in the super heroes theme. Buy this set only if you’re after Electro. I foresee that I will dismantle this set very soon and salvage the sad excuse of a trike for parts. Despite being a small set, it doesn’t feel like it packs a lot of value and overall, it just lacking. LEGO really need to cut back on Spider-Man vehicles and explore other aspects of Peter Parker’s life.