Marvel’s Guardians of the Galaxy has been on my list of must-watch movies ever since the premiere of the very first trailer early this year. The movie’s premise seemed so incredibly fun and silly that I couldn’t help but be excited about it.

I managed to catch the movie at IMAX Melbourne on Sunday and even with my astronomically high expectations, the movie blew me away. I’ll pen a full review shortly, but I wanted to get some Guardians of the Galaxy set reviews out of the way first. Now before I begin, I have to admit that the movie was my very first exposure to Star-Lord and gang. I barely knew about these guys before this, so go easy on me if I get any details wrong or mixed up!

Guardians of the Galaxy will be released in Australian cinemas on Thursday, 8 August 2014. Believe the hype and go watch it. 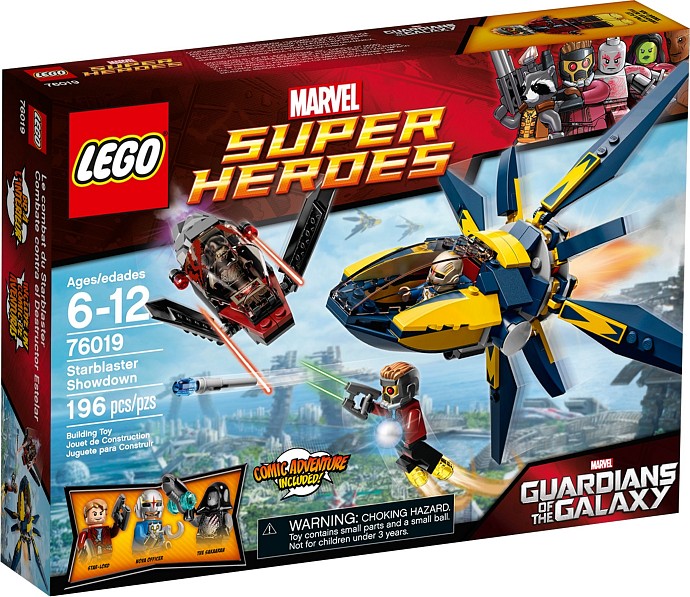 The Starblaster Showdown is the smallest set in the relatively small Guardians of the Galaxy sub-theme. Unlike The Avengers where Marvel went all out with a bevy of sets to support the film, they decided to scale it back a little for Guardians, gracing us with only 3 sets. Compared to previous movie tie-ins like The Lone Ranger or Man of Steel, 3 sets really doesn’t feel like a whole lot in the grand scheme of things.

Kicking off the review is one of the most exciting things about new LEGO themes, new minifigures! 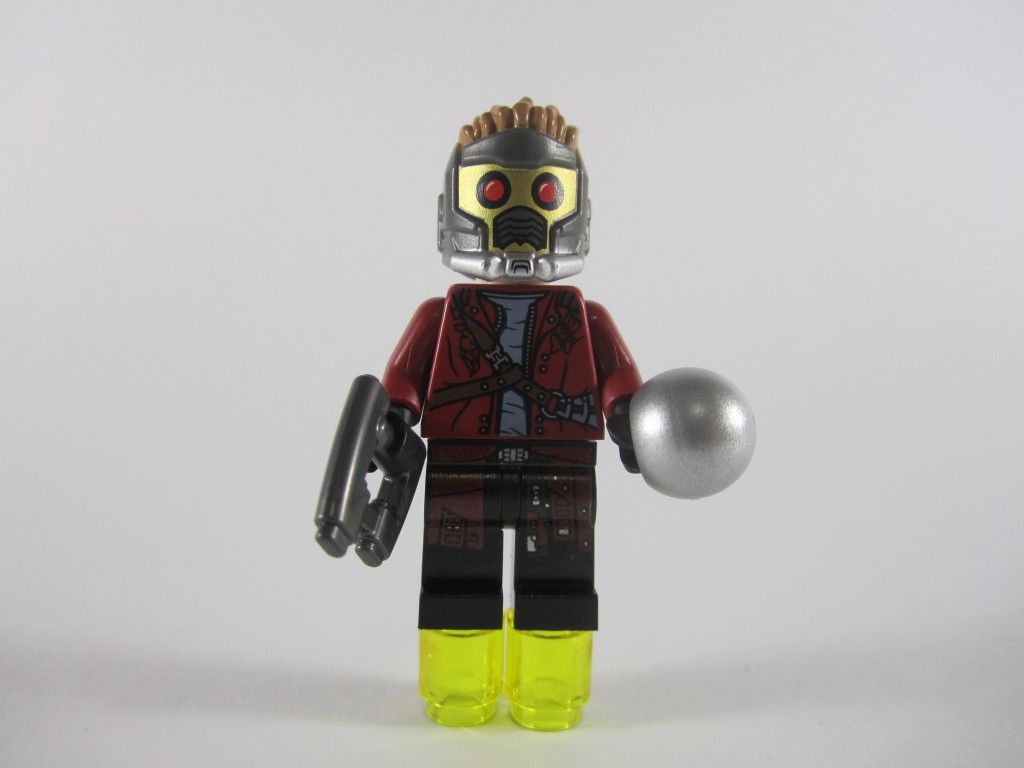 First up is Peter Quill, better known as Star-Lord – leader of the Guardians of the Galaxy. From the moment I assembled Star-Lord, I went “Wow” out loud – it’s a really impressive looking minifig. Decked out in his iconic mask, which in itself is a really impressive new mould, Star-Lord just looks really really cool. With every new set released, I get more and more impressed by the level and clarity of detail that they’ve managed to pack into the torso and leg printing.

Peter Quill packs heat in the form of his blasters, which bear a striking resemblance to Plasma Rifles from Halo. Star-Lord comes with 2 blasters for dual-wielding badassery. Also included is a shiny silver sphere, which I presume is the orb of light that he uses to illuminate dark spaces which was featured prominently in the trailer. Capping off his entire look are two transparent yellow 1 X 1 round bricks which creates the illusion of his feet thrusters that Star-Lord uses to zip around space. 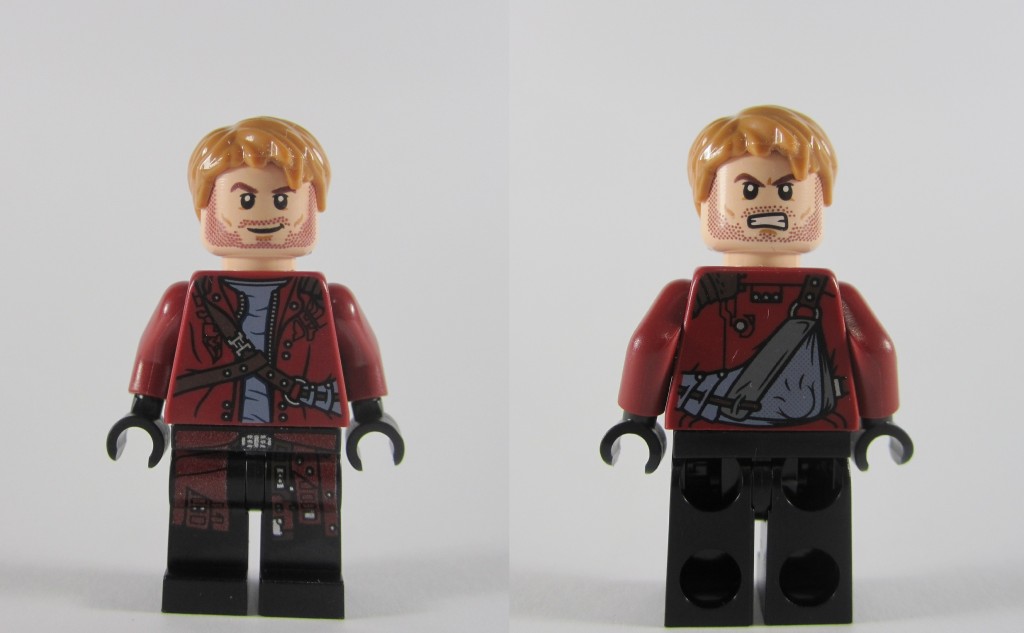 Here’s a closer look at Peter Quill sans Star-Lord mask/helmet. Also included is a hairpiece which comes in a really neat shade of orange, to give you some flexibility to show off Christ Pratt’s likeness. With most humanoid minifigs, Peter Quill has a dual-sided face, one of which sports a smug little smirk and on the other side, a more determined teeth-baring action look.

As mentioned earlier, the printing on his torso and legs is exquisite, and I especially like that they managed to sneak in a tiny bit of detail on his back – a round object pokes out of his grey sling-pouch. Could it be the mysterious metallic sphere that Star-Lord is trying to steal in the trailer?

Here’s a closer look at Star-Lord’s mask which is beautifully moulded and painted. The details are really well done, with the crisp and sharp printing. I also like that the hair colour is a very very close match to Peter Quill’s hair. 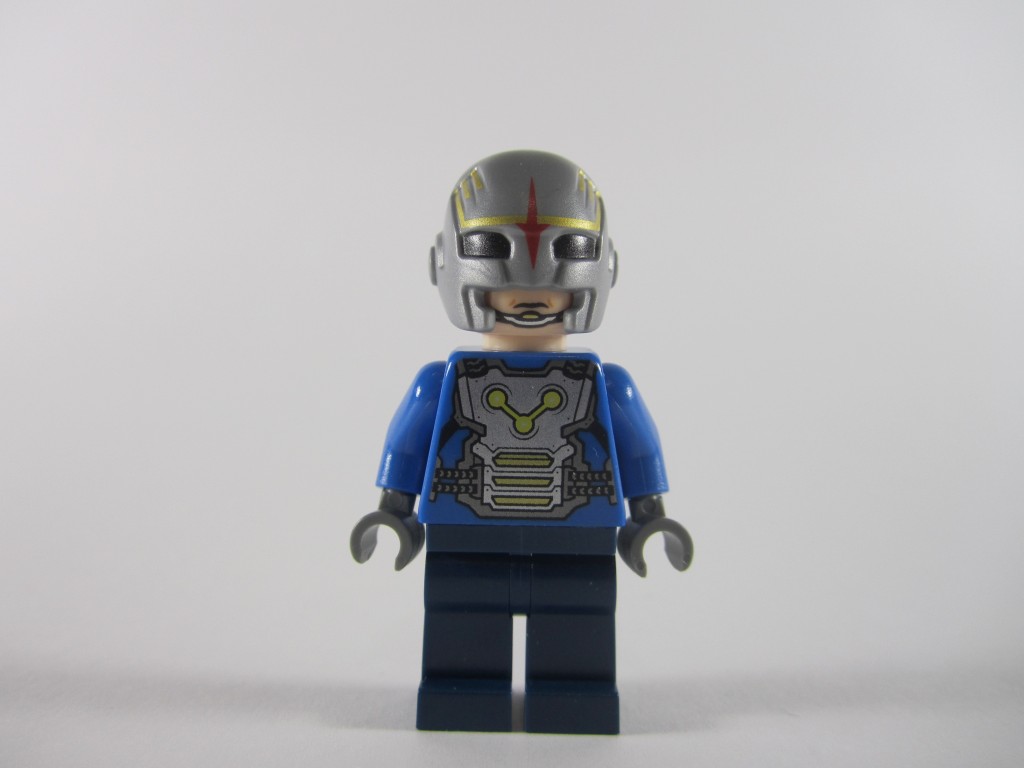 Up next is the Nova Corps Officer, which are pretty much law enforcement officers in the Guardians of the Galaxy universe. These policemen characters feature quite prominently in the movie, given that the plot of GotG revolves around a bunch of outlaws banding together to save the universe. Like Star-Lord, the Nova Corps Officer also comes with his own fancy headgear.

Like Star-Lord’s mask, the Nova Corps Officer’s helmet is also well designed with the gold lines and great moulded details. Having watched the movie, I can safely say that LEGO have done an impressive job capturing and replicating the details from the Nova Corps Officers on the big screen. 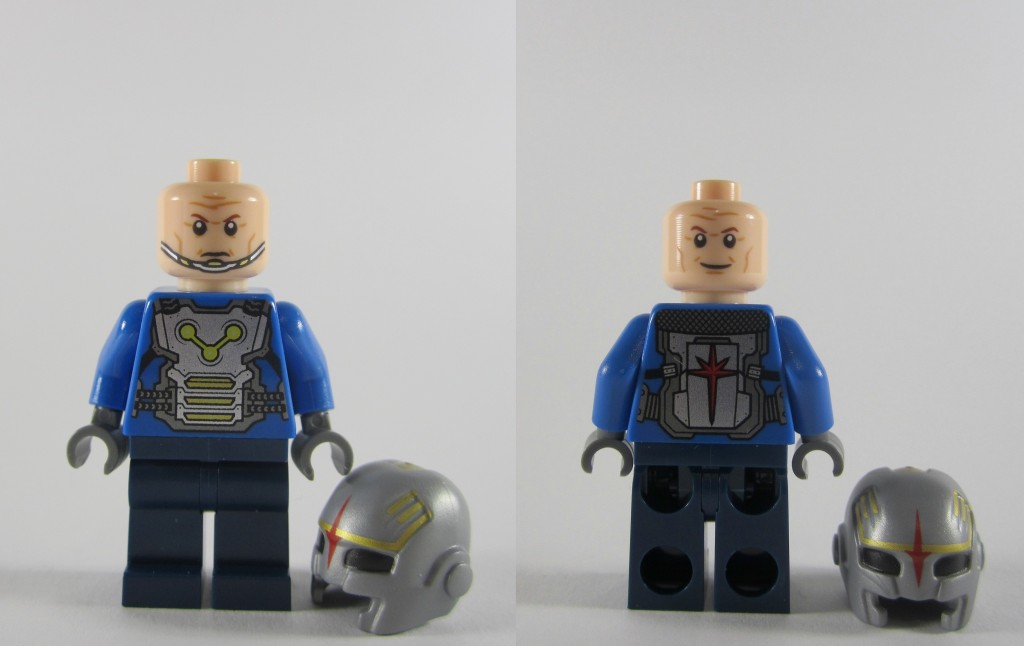 Remove his helmet and you’re greeted by a stern or friendly face, depending on which side of his head you focus on. Strangely enough, his sterner side has an odd chin strap on which looks and feels quite out of place since his alternate face doesn’t have one. His uniform is pretty nice, with interesting details on his space-police vest/armour. All in all, a fairly average, boring but high quality minifigure, seems to be a fair assessment of  the Nova Corps Officer. 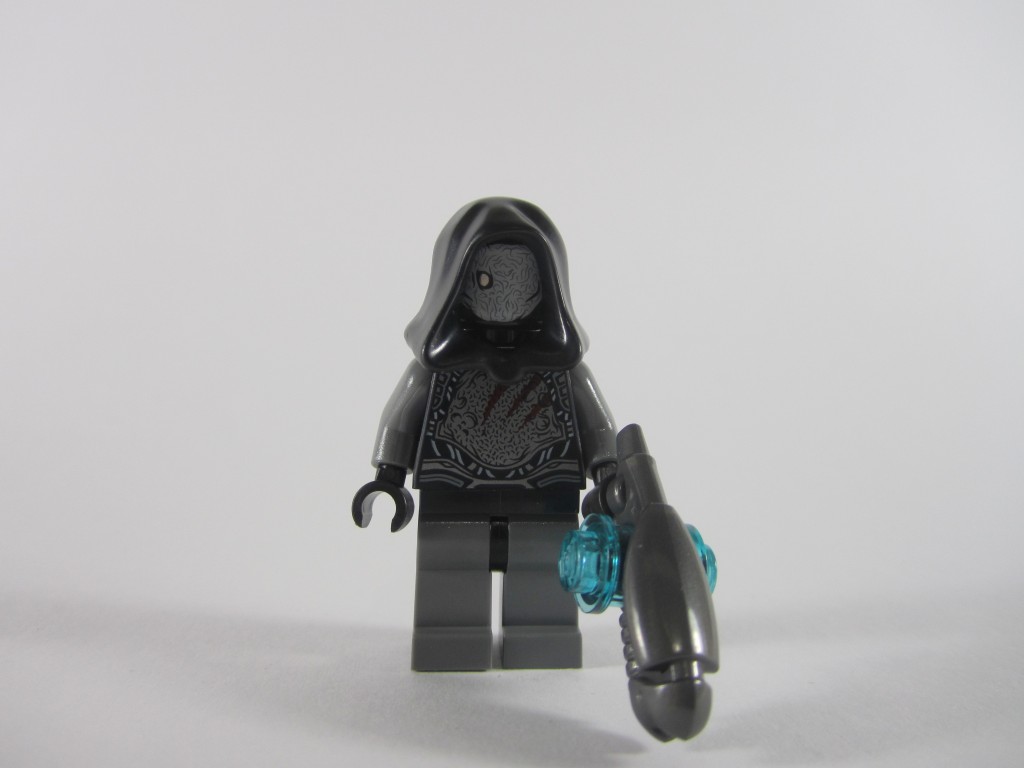 It’s pretty unthinkable to have a Superheroes set without some sort of villainous character. In Starblaster Showdown we have the pleasure of the bad-guy vacancy being filled by The Sakaaran, native humanoids from the Planet Sakaar, which you might be familiar with from the Planet Hulk arc comic books. I like to think of them as faceless Nazgul-like zombies.

Like the Chitauri from The Avengers, The Sakaaran are simply disposable grunts who exist to do the Big Bad Guy’s bidding.

Despite their vacant presence in the movie, The Sakaaran minifigure just oozes character, fear and mystery. I really like the mysterious blank face and the details on his armour as well as another brand new space rifle. 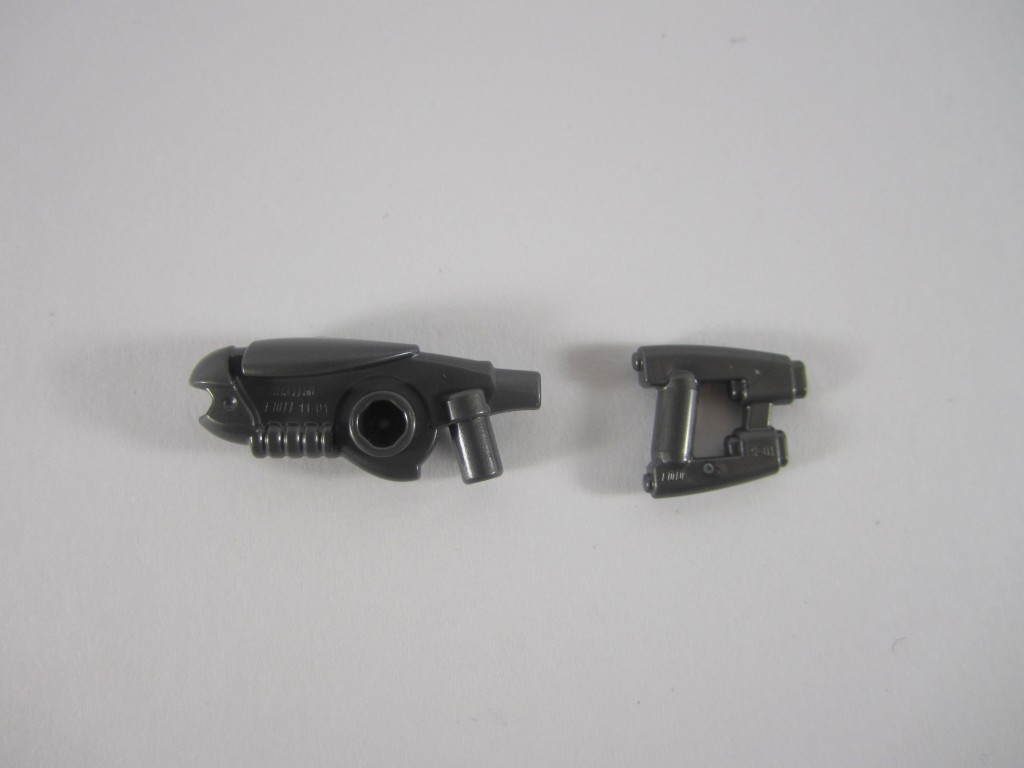 Again, the new Sakaaran gun feels a lot like weaponry from Halo but I really like the curves and overall shape of the alien blaster. The new guns are a welcome addition to my LEGO arsenal. 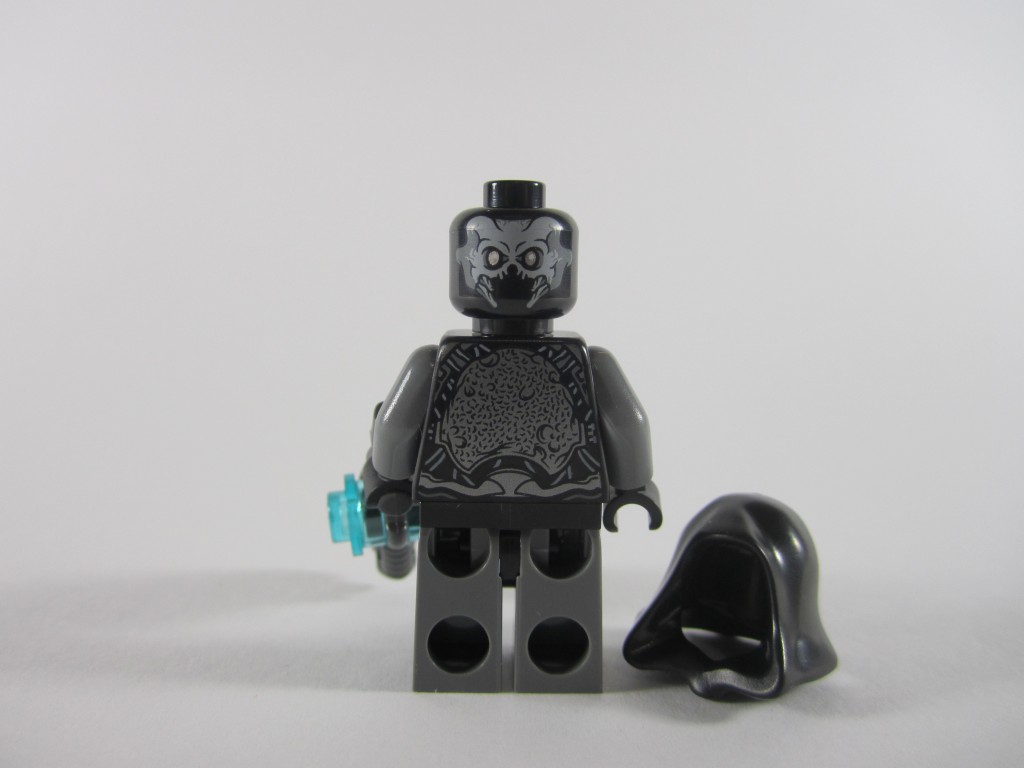 Flipping The Sakaaran’s head around reveals a more terrifying look which reminds me of a cross between a tarantula and a skeleton. Back printing is accounted for and I want to stress how much I like the visual textures on The Sakaaran’s armour. A really cool bad guy minifig to have and one that I wouldn’t mind multiples of thanks to how menacing they look. Sadly, this set only comes with one of them. 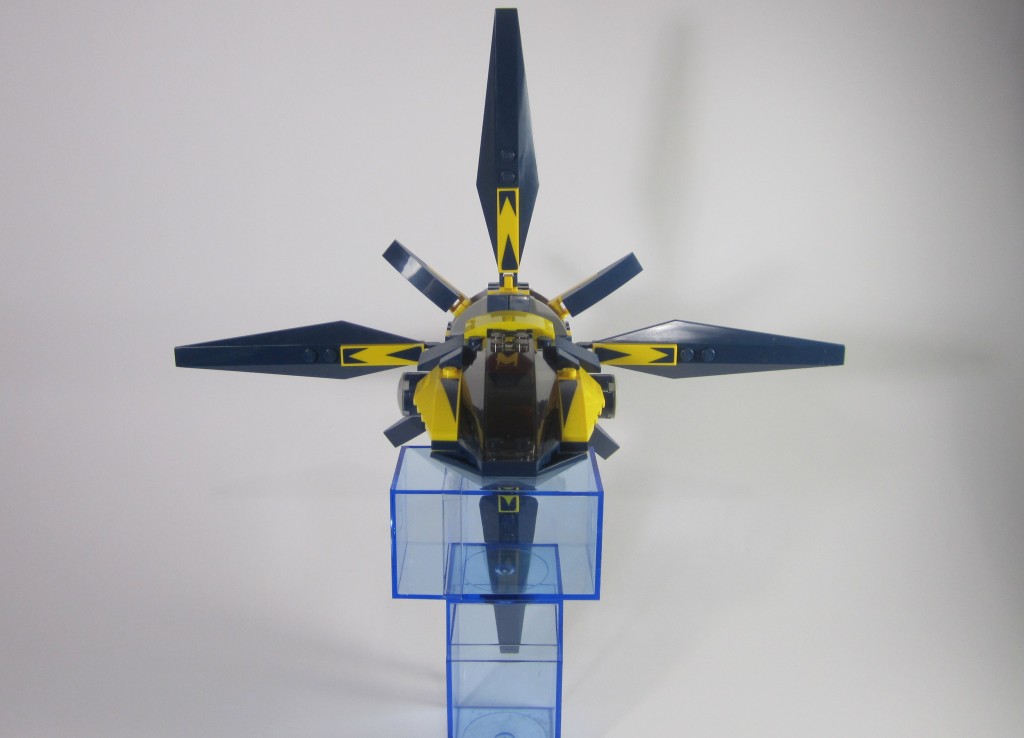 In Bag 1, you construct the Starblaster, the vehicle of choice of the Nova Corps. In other words, it’s a police spaceship but boy, is it a beautiful one. What instantly stands out is the fins that stick out from behind of the Starblaster, when stretched out properly looks exactly like the Nova Corps insignia which is of course inspired by the shape of a pointy six prong star.

I really like the bold and imposing star design which ensures that the Starblaster is immediately recognizable and a sight to behold. The great design is also underscored by the dark blue and yellow accents. The stickers used are unassuming and not too ridiculous looking which ensures that it adds a vector-like pattern to the spokes. 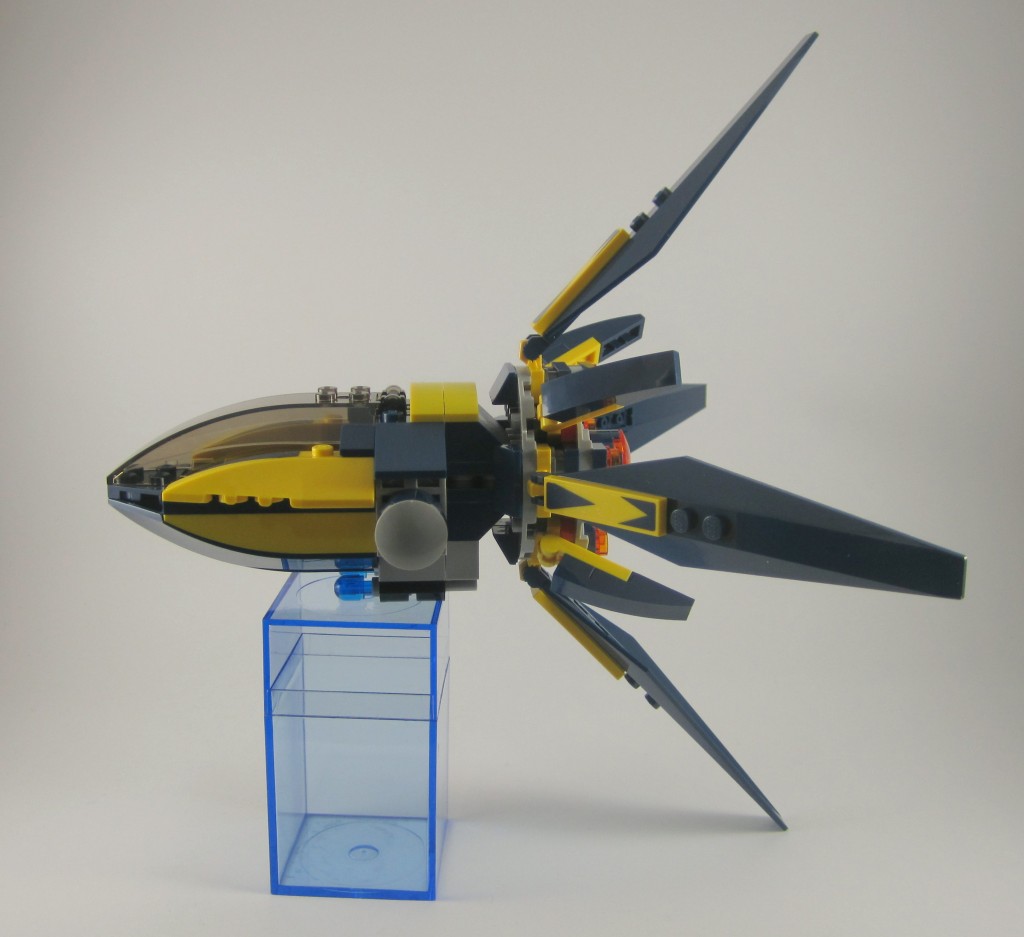 The Starblaster looks equally impressive from the side. The tail fins can bend to alter the shape of the Starblaster, allowing it to look sleeker if by adopting a more aerodynamic (or in this case, cosmodynamic) appearance. 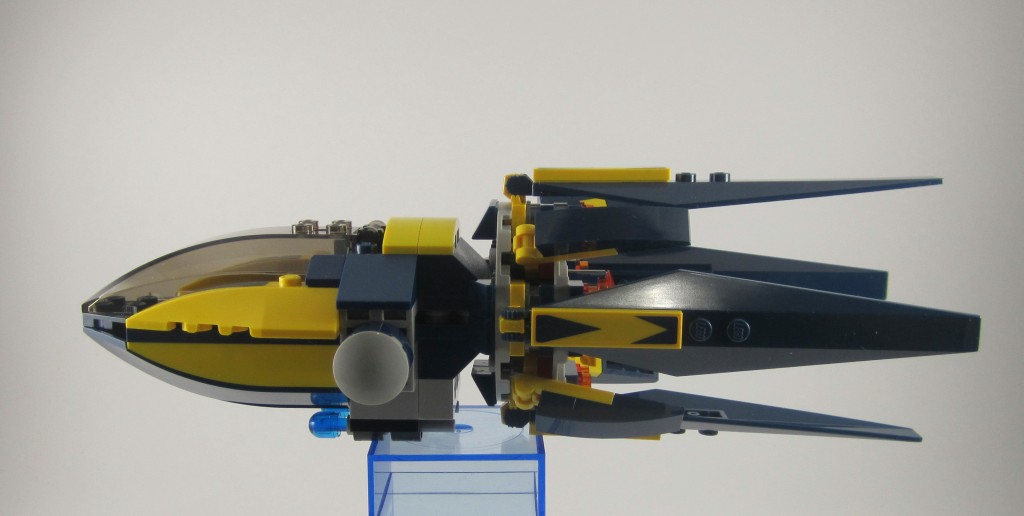 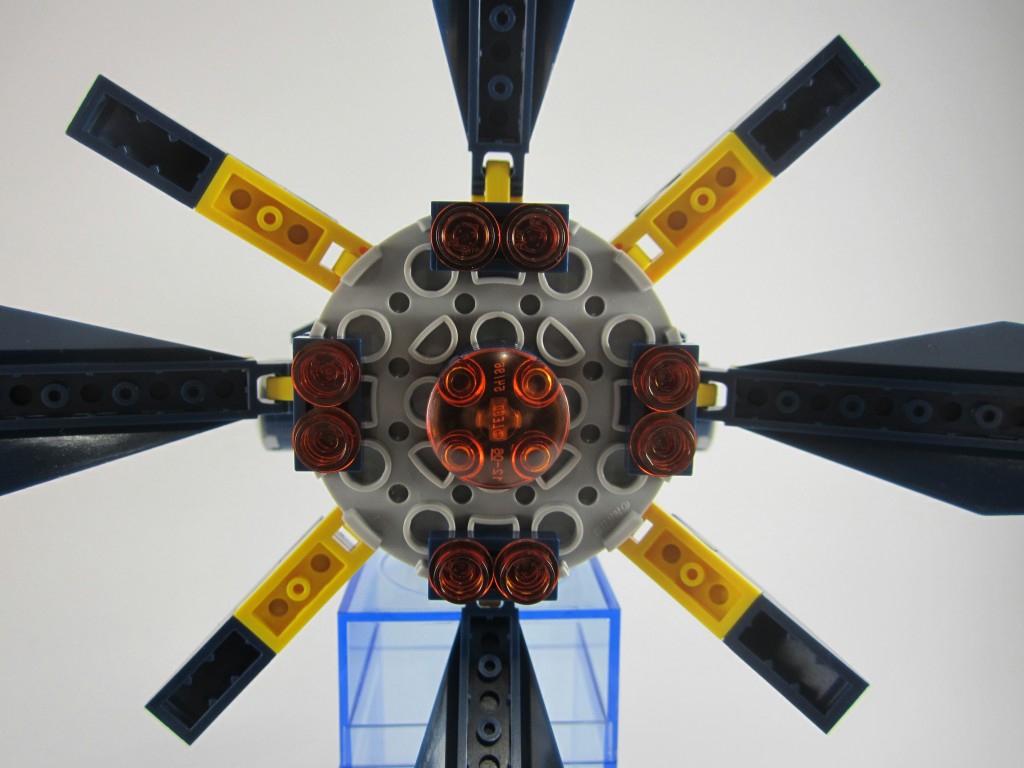 From behind, LEGO has employed the use of trans-orange pieces as engine thrusters. It’s all really symmetrical and quite pleasing to the eye. I like balance.

The Starblaster is a pretty decent spaceship and despite the low piece count of this set, I never once felt like it was underwhelming or small. 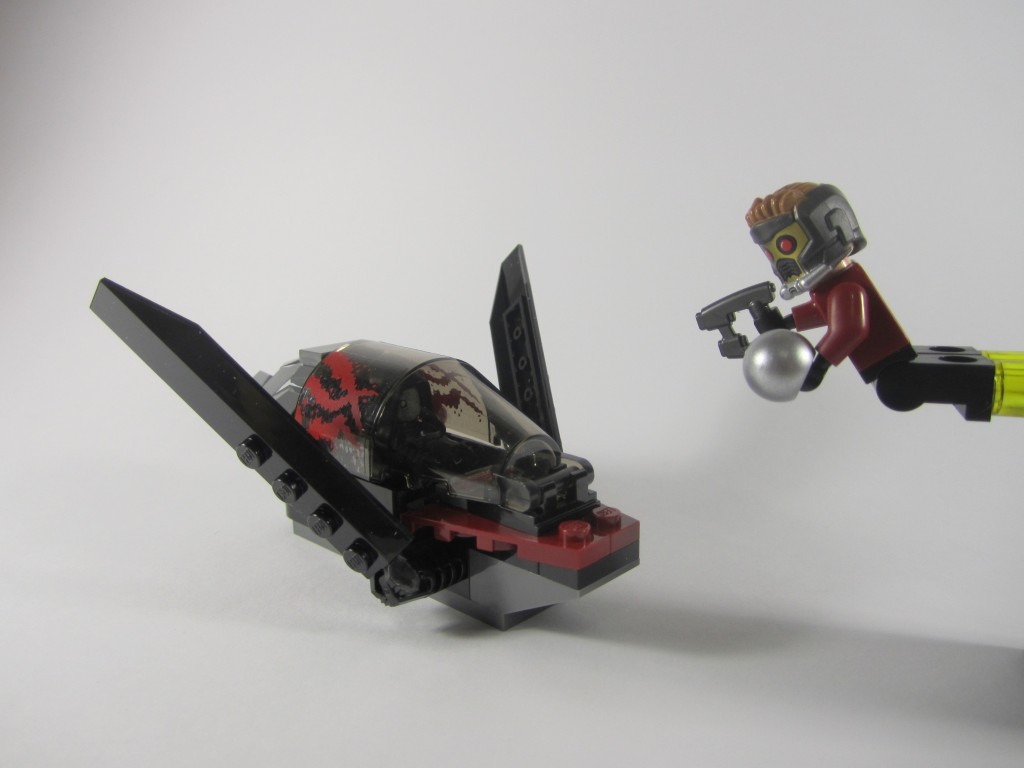 In the second bag, you assemble The Sakaaran’s own spaceship, the Necrocraft. It’s more of a space pod with two small wings attached to it. The wings make it look like a fly. Don’t mind Star-Lord zipping around, I added him in to add some pizzazz to the photo. 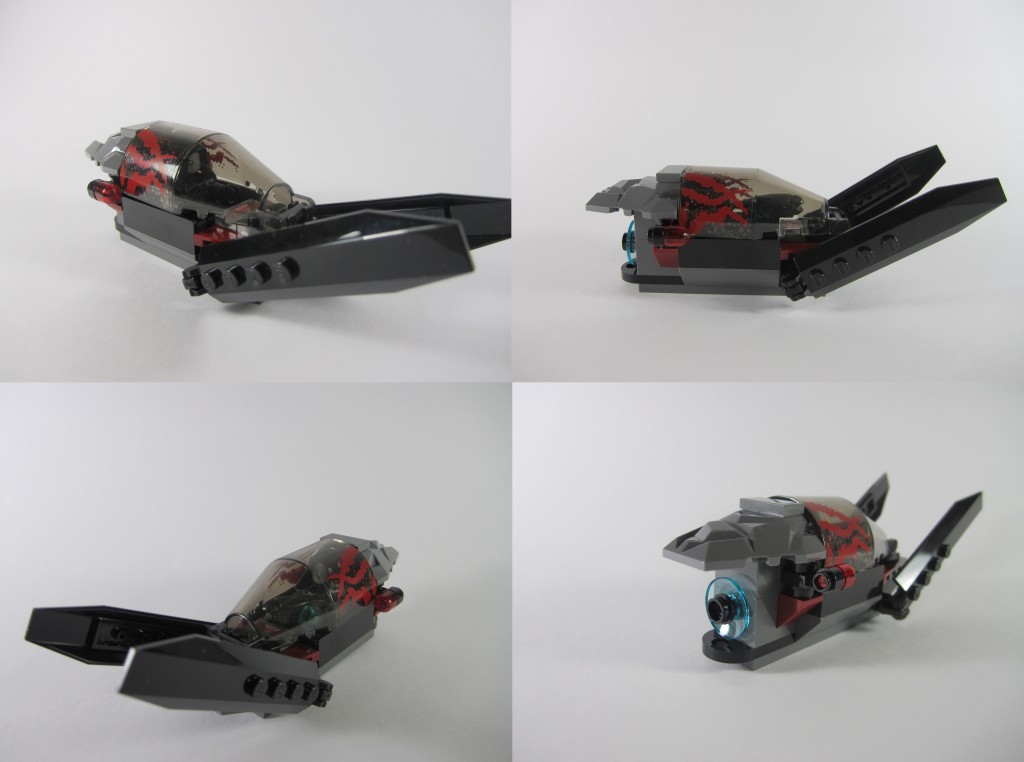 In the movie, the Necrocrafts have a really rocky and ghastly appearance, which LEGO has tried to replicate using stickers and a craggy piece behind. The Necrocraft’s small size is a bit of a let down and while they’re supposed to attack in massive swarms much like bees, the LEGO version just feels quite insignificant and quite boring.

The wings can be tilted backwards and forwards and the cockpit opens upwards but other than that there’s not a lot going on with the Necrocraft. 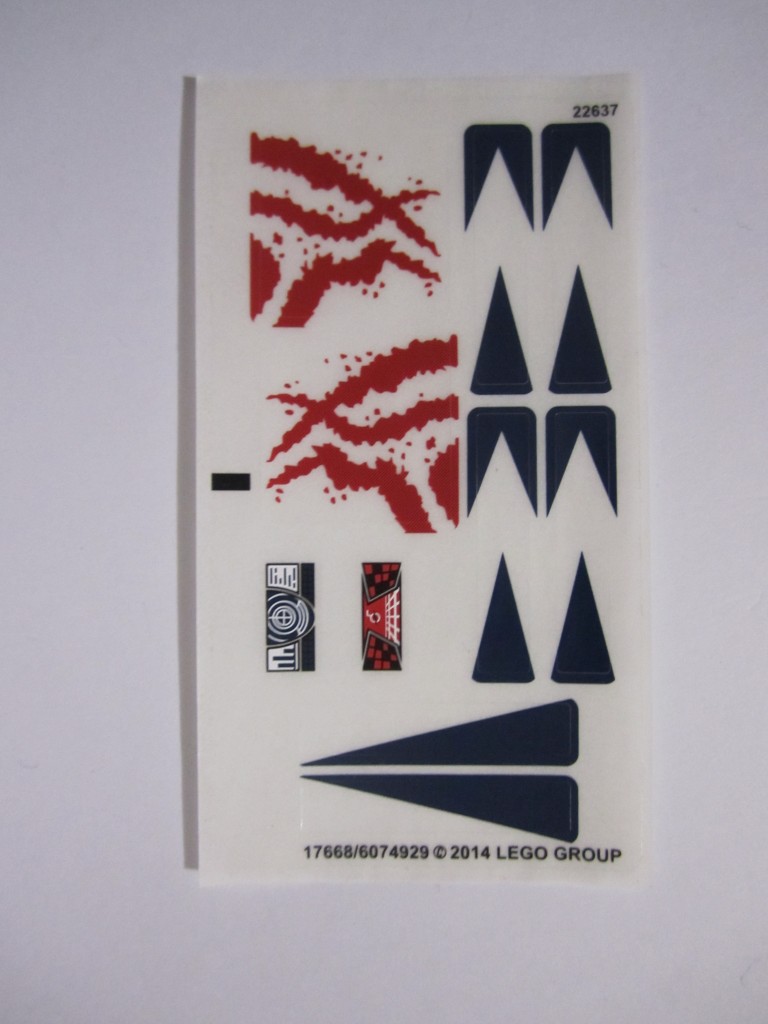 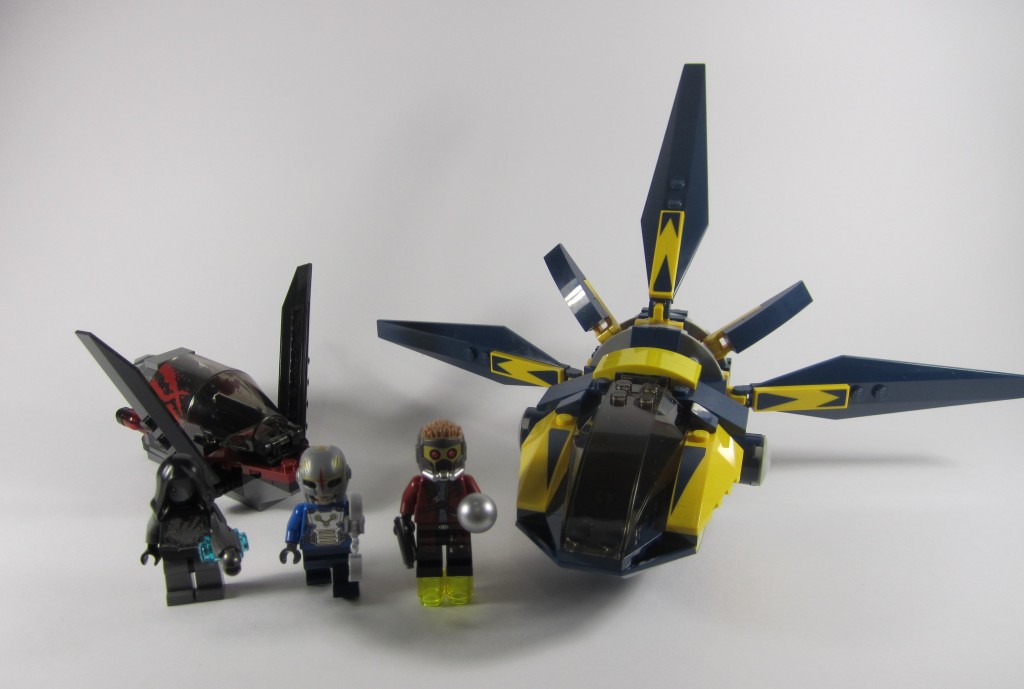 Final Thoughts: At its core, Starblaster Showdown feels like a bit of a letdown. Apart from the great Starblaster ship and Star-Lord minifigure, there’s not a lot going on in the set. The Necrocraft is a bit of a joke and an excuse to cobble a bunch of parts together to up the piece count. While it may have been featured quite frequently in the movie, it just doesn’t translate as well to LEGO compared to the Starblaster. The Nova Corps Officer is also quite a boring character – they could’ve at least given him more interesting accessories instead of handcuffs to sweeten the deal. The Sakaaran, while a competently designed minifigure also falls on the boring side of things simply because it’s a nameless character.

For a $40 set, having only one main character from the movie feels like a bit of a waste seeing as how sets in this price class usually make up for the lack of bricks by having interesting minifigures. At the very least, if they had included another character such as Yondu or Nova Prime, it would help bump up the perceived value of the set. Actually, even if they had included another Sakaaran minifig, it would help a little.

Because of the lack of interesting minifigs, you can actually skip out of this set and still assemble the main cast of the Guardians of the Galaxy since Star-Lord shows up in The Milano Spaceship Rescue albeit in a slightly different costume. So unless you’re a hardcore collector and don’t want to miss out on the Nova Corps Officer and all Star-Lord versions, you can give this set a miss and not lose out on much.

With a $40 price tag, it’s difficult to recommend buying this set. 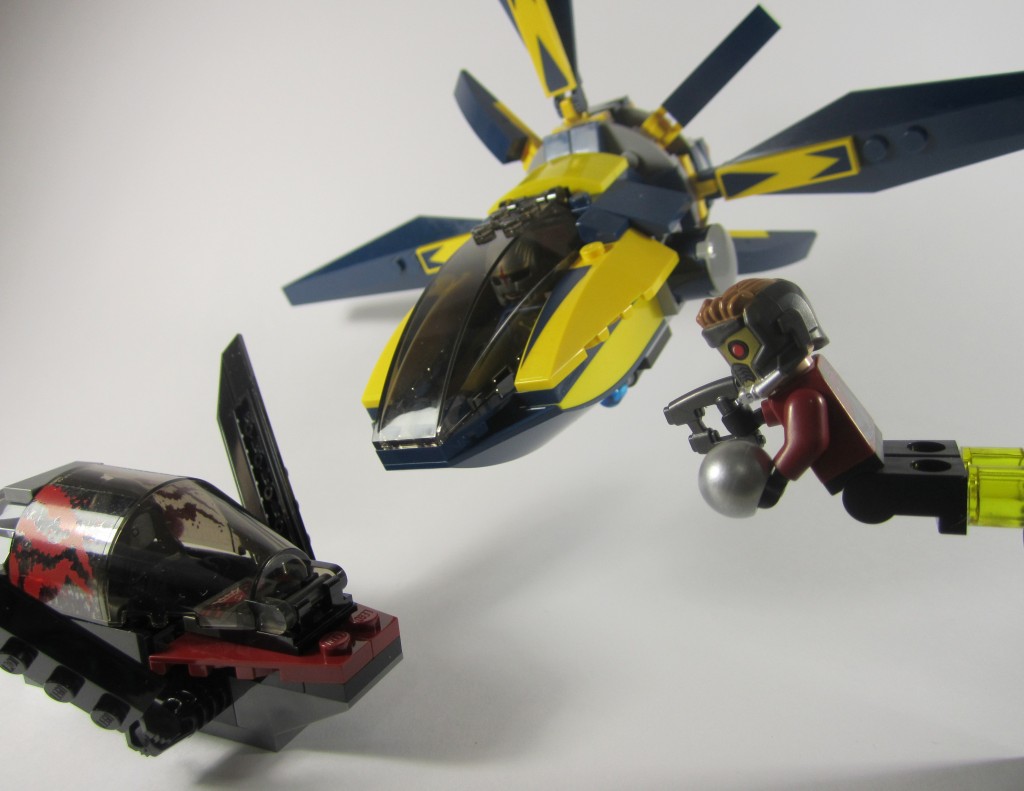 Thanks for reading and I hope you got a little something out of my review. Stay tuned for my reviews of the next two sets from the Guardians of the Galaxy sub-theme. GotG opens in Australian cinemas this Thursday, 8 August 2014. 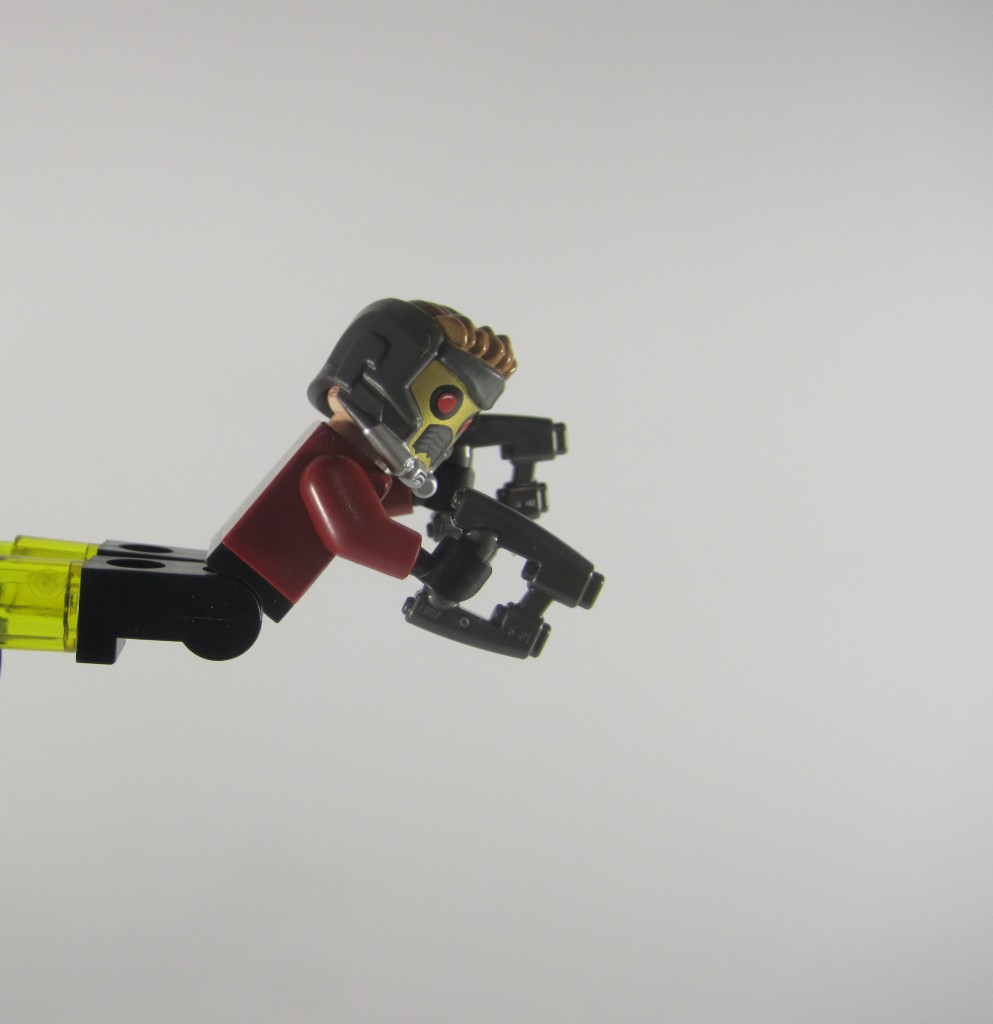 To see more photos, check out my Facebook page: