My review of Ant-Man Final Battle is a little peculiar on a few levels – firstly because the Ant-Man movie came out months ago in July 2015 and secondly because of the much publicised design flaws which led to LEGO Australia deciding not to make the set available in the country.

The availability was a big deal for me as it’s a small set and I usually like to impulse purchase them when they inevitably go on discount at retailers just because it’s a bit more convenient and finding a reason to hit $200 on LEGO.com can sometimes be a challenge. I picked this set up during one of my recent LEGO.com orders and finally got around to building and photographing it. I was quite impressed with the end result, which made me a bit sad seeing as how most Australians will not be able to get their hands on what I think is one of the more remarkable Marvel Super Heroes sets this year.

Let’s get on with the review! 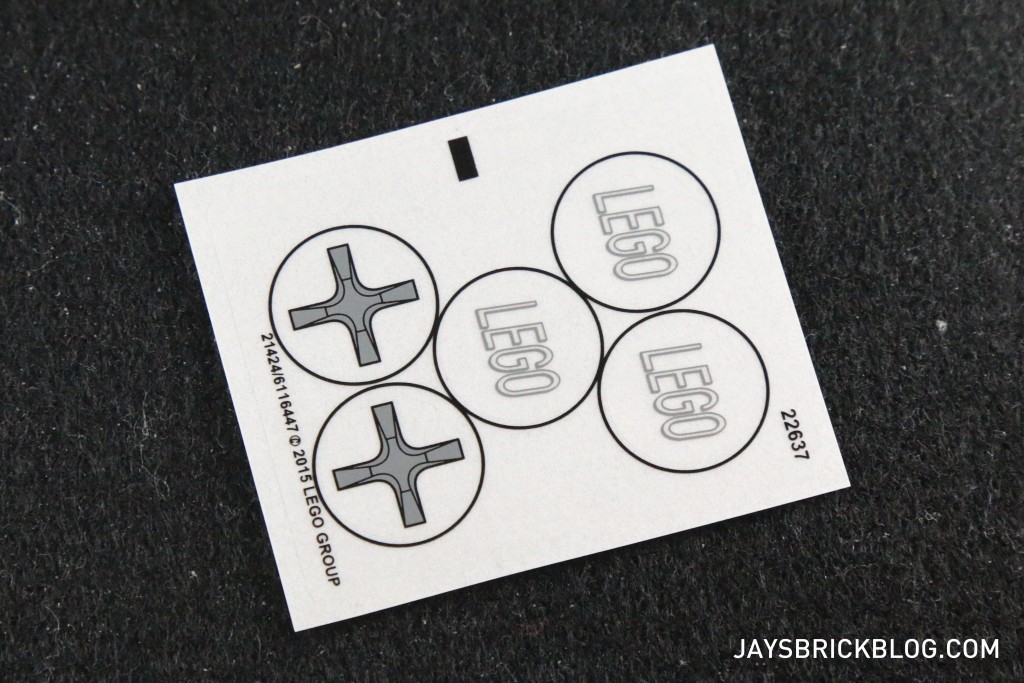 Here’s a look at the small sticker sheet included in the set, with the details for the LEGO bricks and Phillips screws. You’ll see what they’re used for in a bit. 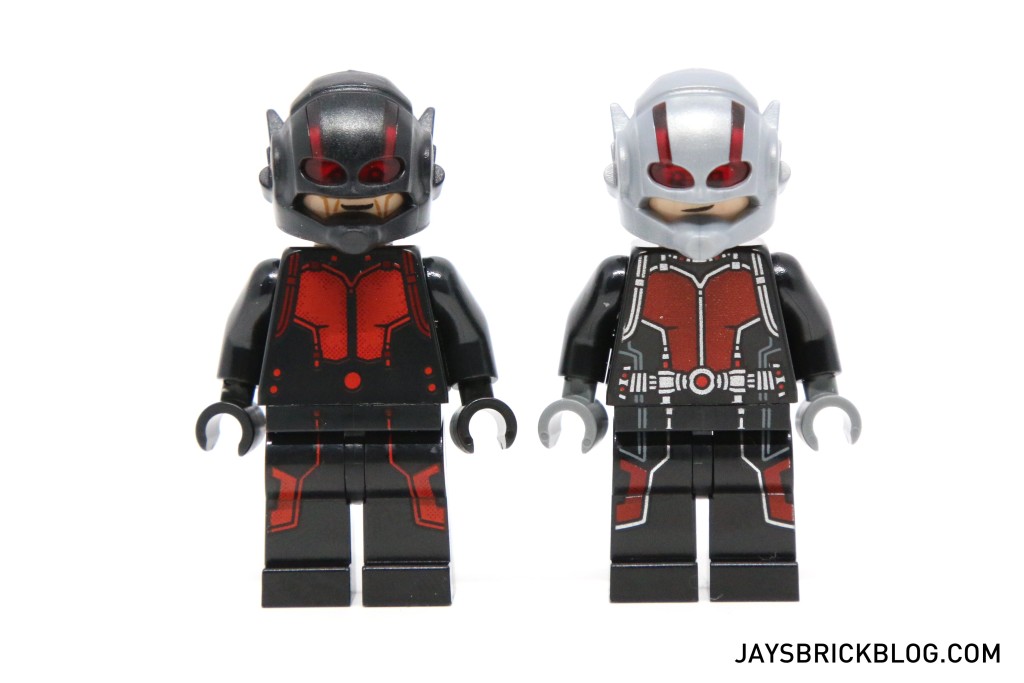 Ant-Man Final Battle is a stellar set for minifigures and we’ll take a look at the two major characters Hank Pym in his black Ant-Man suit and Scott Lang in the classic Ant-Man suit. I don’t believe that Hank’s black suit is seen anywhere in the movie, which is a little surprising but a very pleasant minifig addition anyway.

Both Scott Lang and Hank Pym’s minifigure feature amazing print and details, making them one of the standout Marvel minifigs from 2015. Pym’s suit has the same general design as Scott’s but with less detail and of course an inverted colour scheme.

Scott Lang’s minifig in particular has exceptional detail. LEGO’s designers have done an amazing job replicating his suit’s design from the movie, almost perfectly capturing all the cool little metallic and tubing details throughout his body and legs.

One of the most interesting things about both minifigs are the brand new Ant-Man helmets which just look gorgeous. I really love the use of transparent red plastic bits for the eyeholes – the fact that you can see the minifigures’ eyes through the helmet is nothing short of brilliant. Oh, the fact that it’s all one solid piece is cool as well. 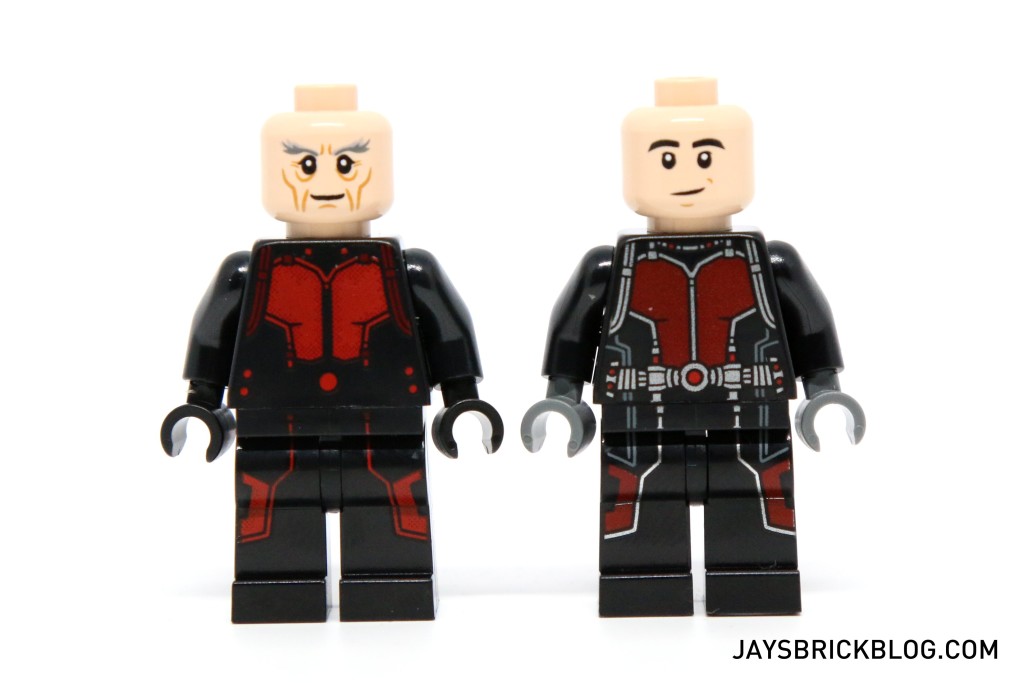 Removing their helmets gives you a better look at their faces. Hank’s face is a little odd as it’s missing Michael Douglas’ luscious goatee. I don’t quite like the exaggerated lines on his face – I think they’re a little too bold for my liking and makes him look like an evil man with a sallow face. 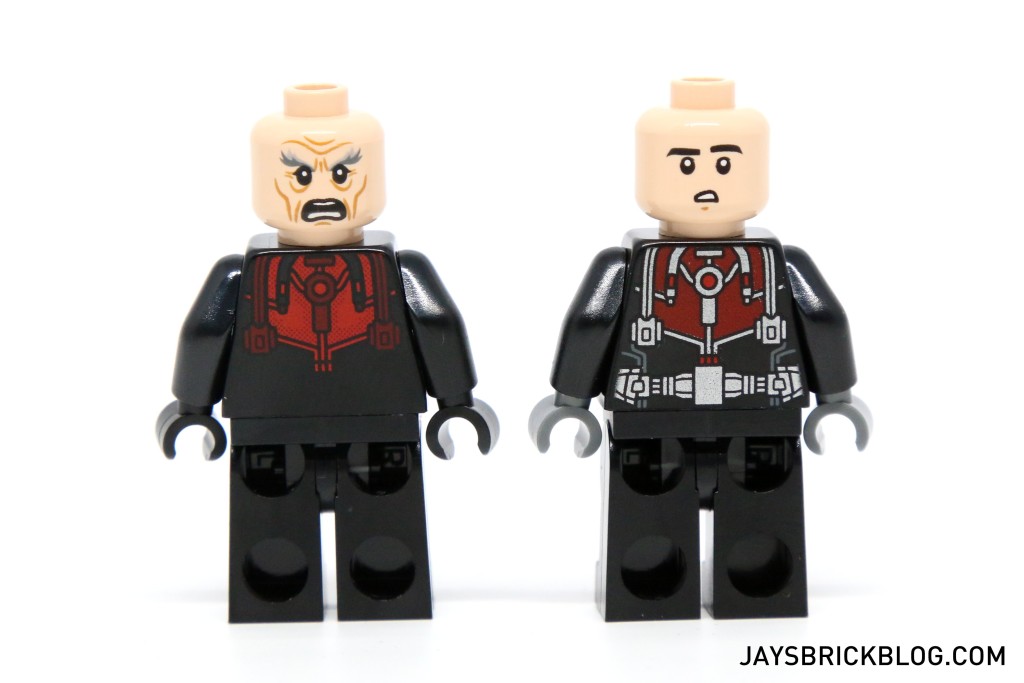 Here’s a look at their alternate faces where Hank has a grumpy and angry expression which again is quite uncharacteristic when compared to his onscreen portrayal. Scott Langs’s alternate face on the other hand is yet another winner with an awesome quizzical expression, complete with the subtly raised eyebrow.

Scott has one of the best expressions I’ve ever seen in a licensed minifigure.

Shame they both didn’t come with their own respective hairpieces but eh, that’s a minor complaint as they’re both exceptional minifigures. 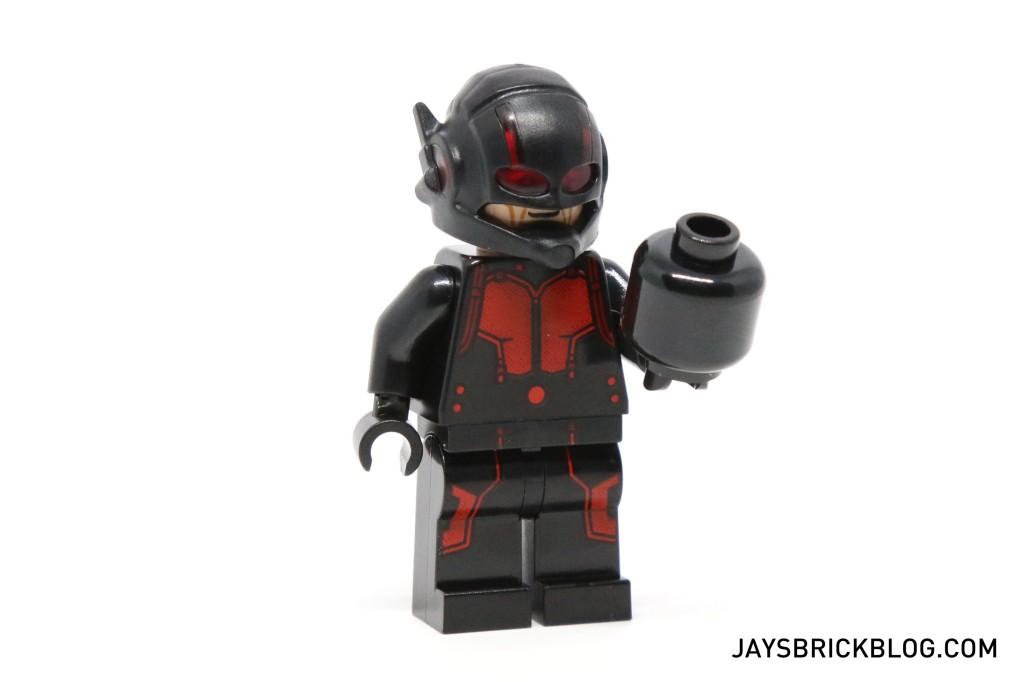 For some strange reason – a plain black minifigure head is included with this set. I have no idea what it’s supposed to be. If you know what this is, let me know in the comments. 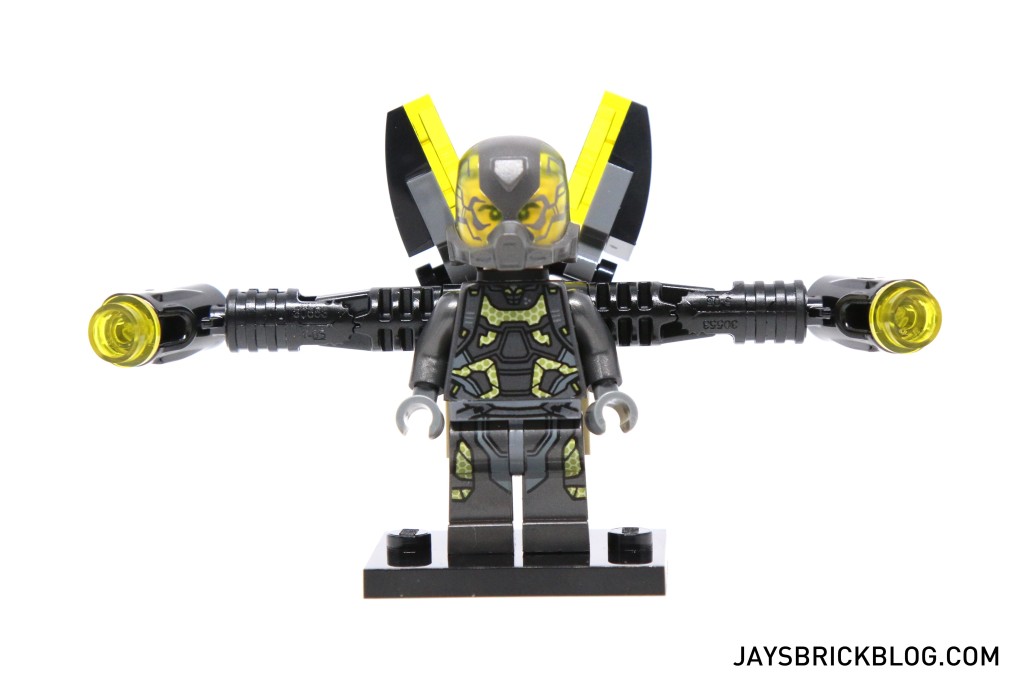 This is Yellow Jacket, the primary antagonist of the movie. He has a wicked sick futuristic suit and an awesome grey and yellow colour scheme. Yellow Jacket sports some serious weaponry, with two laser blasters extending out from his backpack.

My favourite thing about Yellow Jacket is his terrific torso and leg prints – it’s ultra-futuristic and fairly generic looking that you can easily swap it out for other uses. The printing is razor sharp and I particularly like the tiny little hexagons within the pale yellow bits.

Combined with the angular designs, the exoskeleton makes for a triumph in minifigure design. 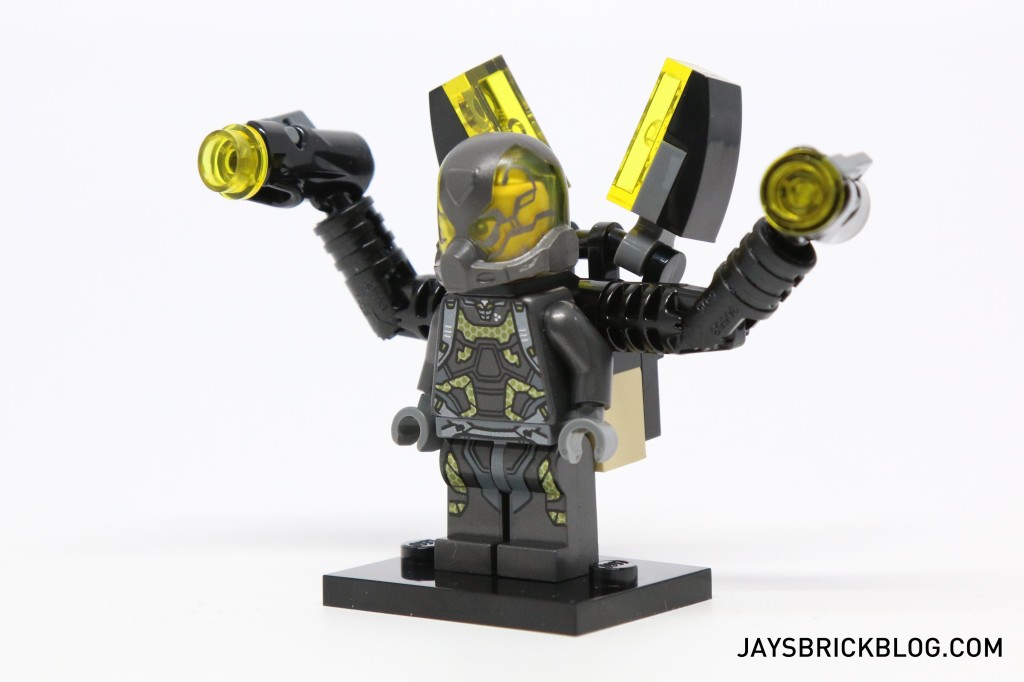 Here’s a closer look at Yellow Jacket from the side. Like Ant-Man and Hank Pym, his helmet is another accessory of note and also features a translucent design, which is really cool cause you can see Yellow Jacket’s sinister eyes staring you down.

His laser blasters are adjustable so you can swivel them up and down and even rotate them around, letting you pose them however you want which is a really cool feature that they’ve managed to incorporated. The stud blasters on each tip are clever used in this instance, allowing you to fire transparent yellow pallets around the room. 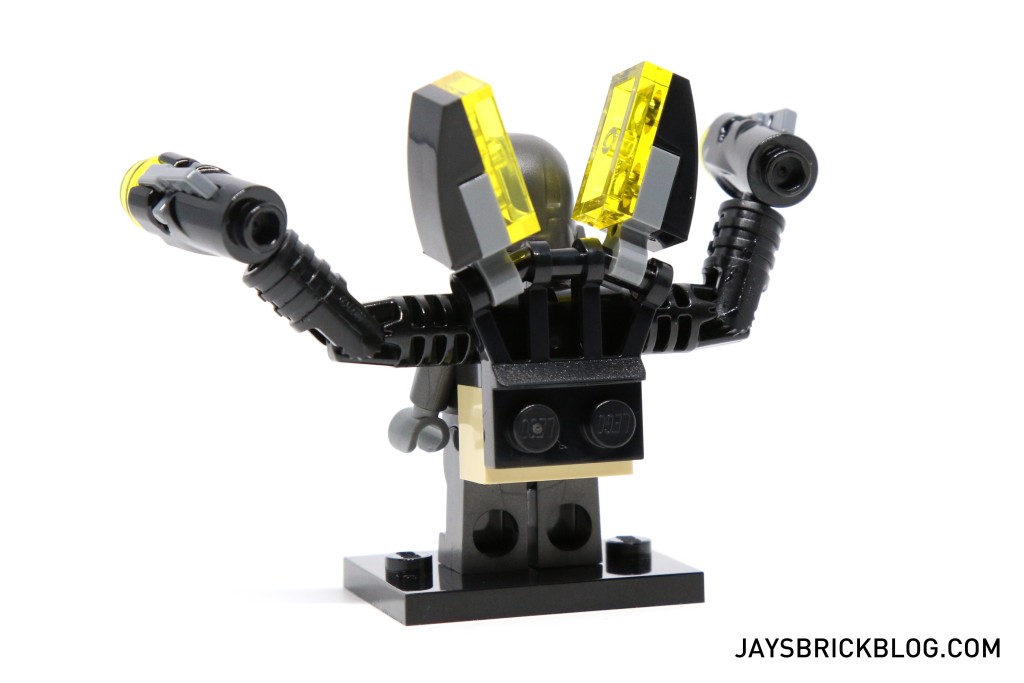 Here’s a look at his suit’s “backpack” from behind. The only real flaw is that the entire “backpack” is quite large causing quite a number of balance problems with Yellow Jacket. He has trouble standing on its own, which is why I’ve used a base to photograph him as he’ll just topple over without it. 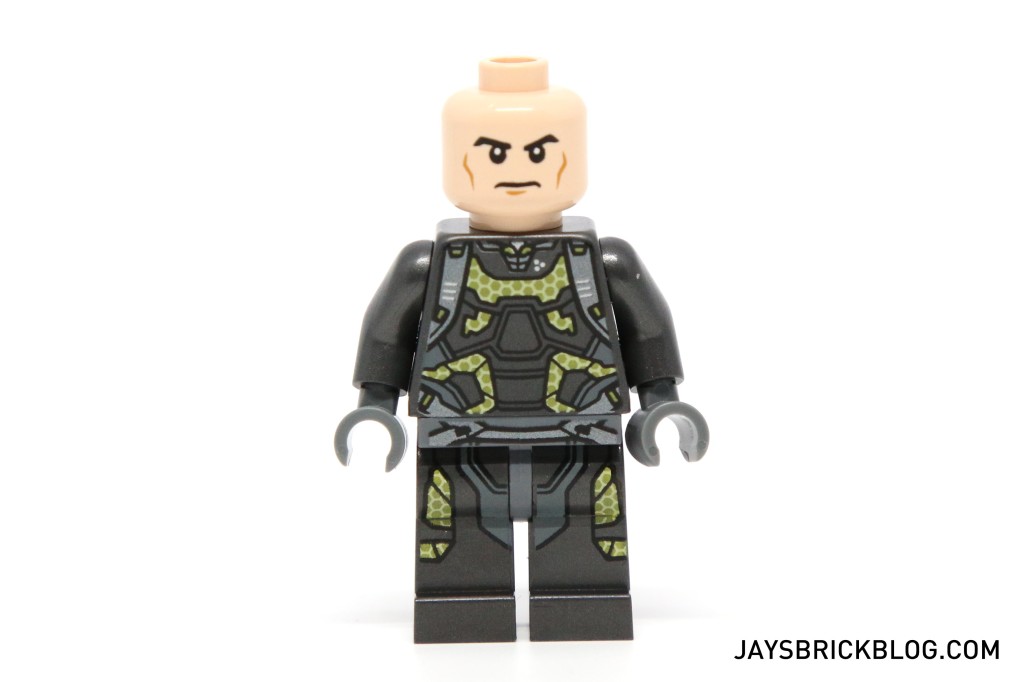 Removing his mark lets you have a look at Yellow Jacket’s face – he has a stern looking expression with accentuated cheekbones and pretty strong eyebrow game going. It’s fairly generic as faces go and there’s no alternate face which is a bit of a bummer. 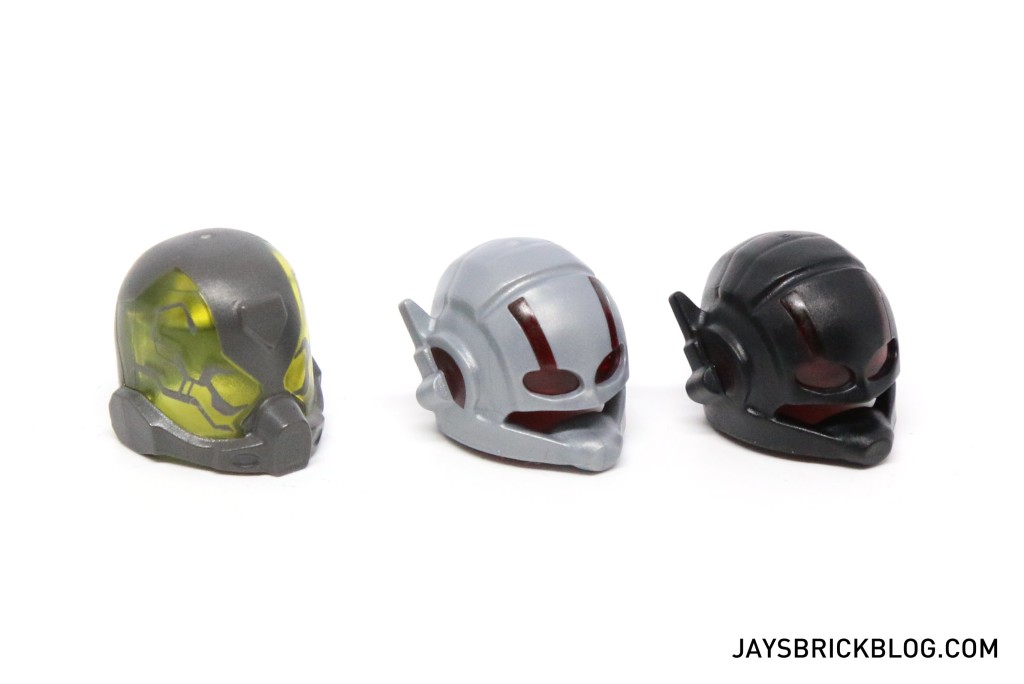 Here’s a look at all 3 helmets included in the set. The workmanship and effort going into the design of these accessories are second to none and I really hope we get to see them being put to use in future Ant-Man sets. Maybe another Scott Lang outing when Civil War hits cinemas next year? 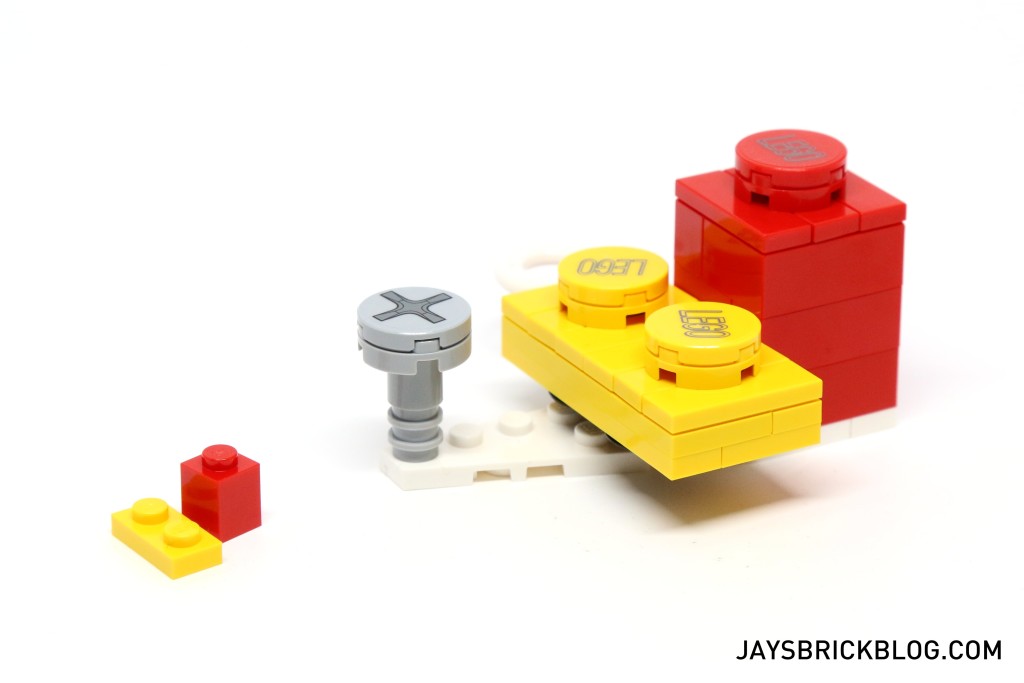 On to the builds, Ant-Man Final Battle starts out strong, having you construct these oversized LEGO bricks. If you didn’t watch the movie or know a single thing about Ant-Man – his superpower is derived from a suit that’s powered by Pym Particles which allow him to shrink to the size of an ant.

The oversized LEGO bricks (a 2×1 plate and a 1×1 brick) as well as 2 Phillips screws are the perfect prop for this set and they’re also amazingly designed. The scale is flawless and the use of stickers to add the LEGO logo on the bricks is an excellent touch. 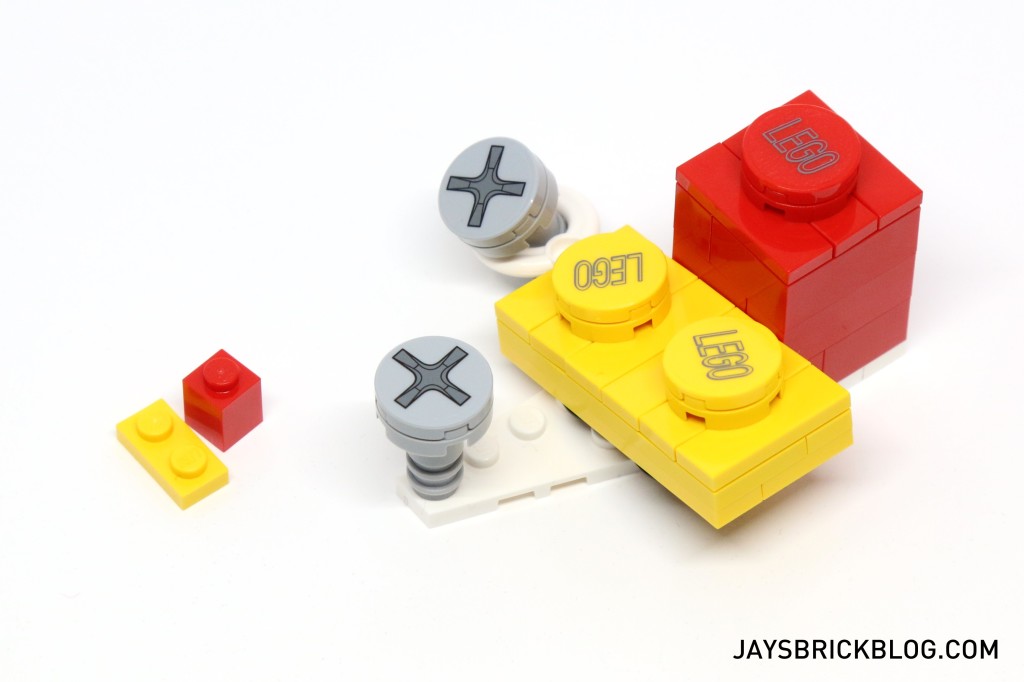 Here’s another view of the bricks and screws. Absolutely brilliant and yet another highlight of this set. 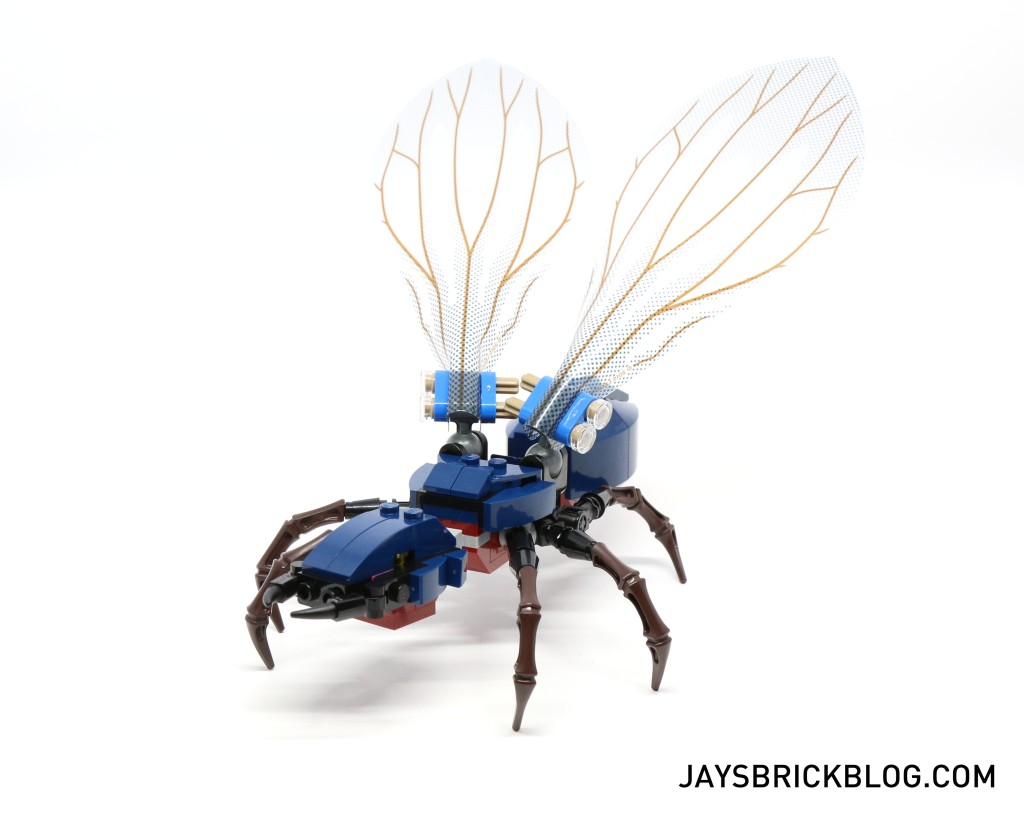 The main model of this set is one of the “minor” but lovable characters of the film – the winged-ant Antony! He’s sort of Scott Lang’s sidekick in the movie – oh did I mention that Ant-Man can also communicate with all sorts of ants and order them to do his bidding? Well now I have.

Antony is an endearing character in the movie and now you get to construct him out of LEGO. As bugs go, Antony’s design is pretty accurate with a head, thorax (middle bit) and abdomen clearly represented and connected by ball joints, which allow quite a degree of poseability. 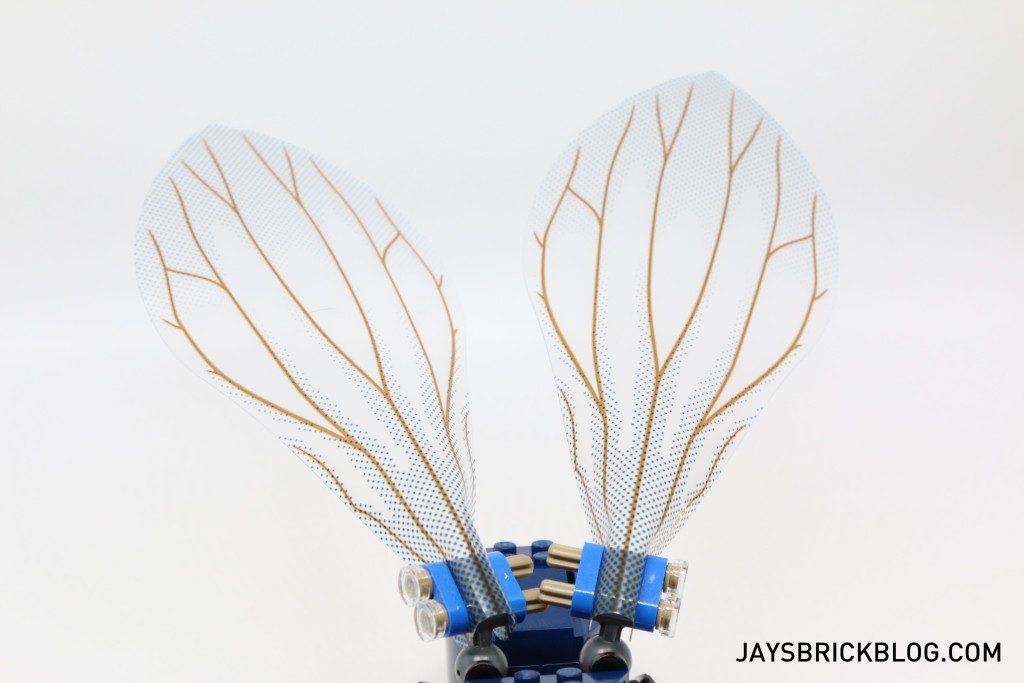 Antony’s wings are his most impressive feature – they’re made of 2 sheets of thick but flexible plastic which are clasped to his thorax via ball joints, which allow them to be rotated in nearly any angle you desire. 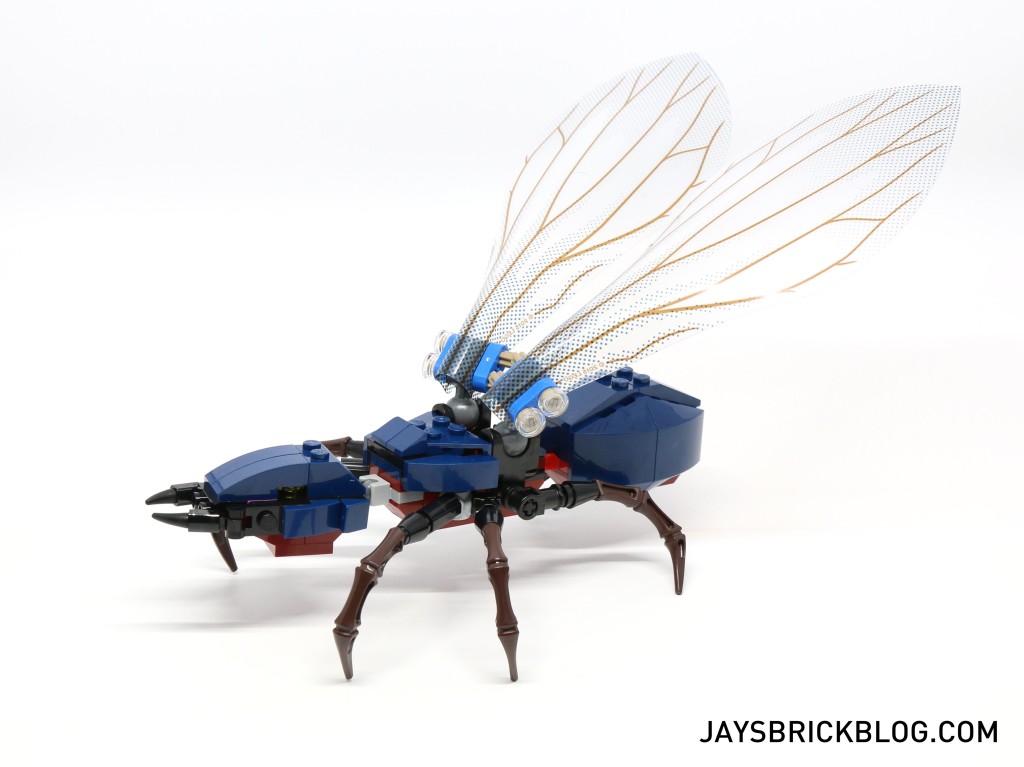 Here’s a side view of Antony. I don’t quite like the brown legs as the colour doesn’t seem right. No idea why LEGO didn’t just go for a uniform black look. I’m also not a fan of the red elements which are present under his belly. I understand that they’re there to break up the monotony of the blue and black but it just looks a little weird to me. 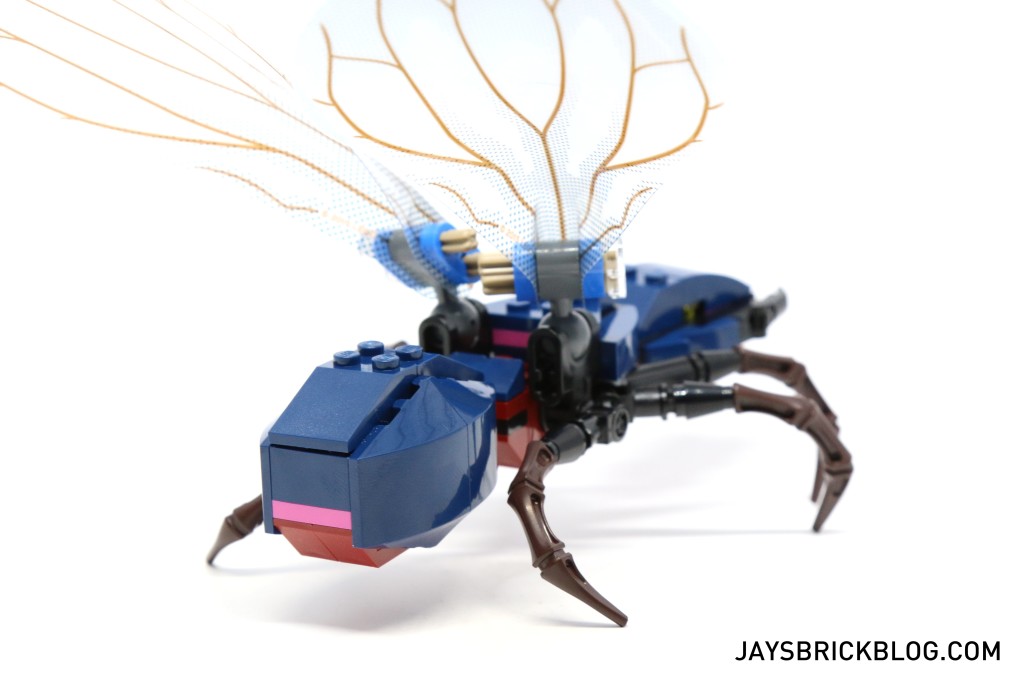 Here’s a look at Antony’s behind. I… don’t want to know why his butt has a slightly pink section. I really don’t.

Antony scores lots of points for being extremely articulate – you can move most of his legs and wings around as well as twist his body into different shapes thanks to the ball joints and is generally quite nice to look at from afar. His giant wings do a lot to help him look unique. 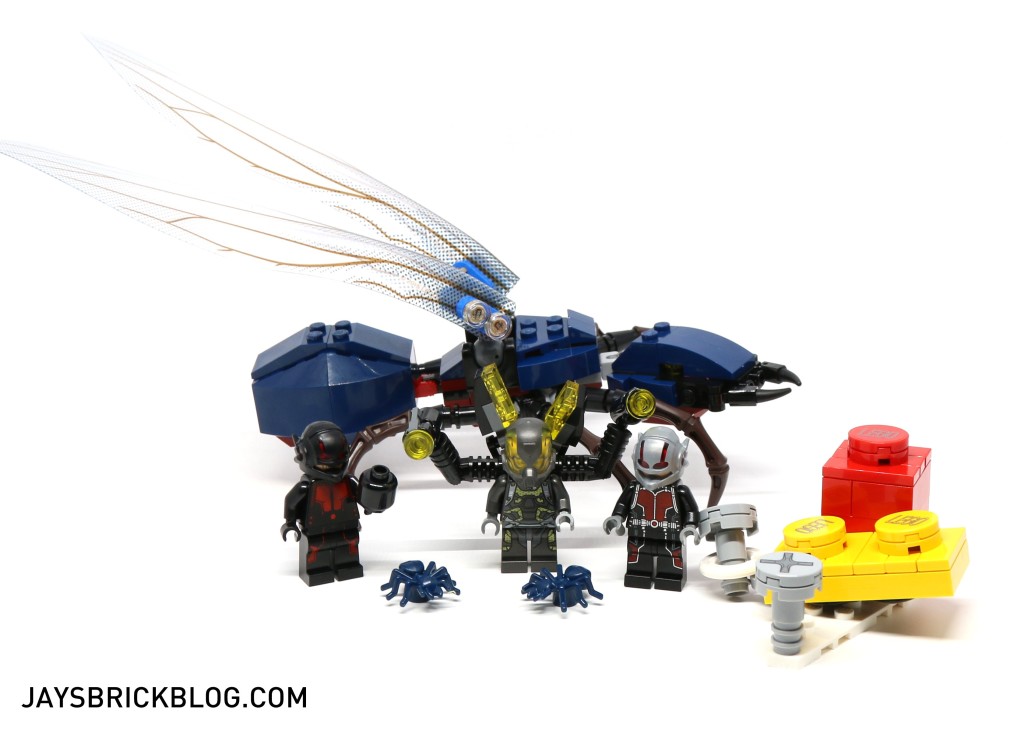 Final thoughts: The review is a little overdue but it still doesn’t take detract from what is one of the most satisfying Marvel Super Heroes sets this year. If you were a fan of the excellent movie (and Paul Rudd ?), you almost owe it to yourself to add this to your LEGO collection.

In a theme where slight minifigure rehashes are the name of the game, it’s incredibly refreshing to get 3 high quality minifigures – each with their own distinct features and designs. All 3 are spectacular and must-haves for Marvel Super Heroes fans.

It’s always a pleasant experience when sets not only come with exceptional minifigures but really cool complementary LEGO models as well. This set nails it with the oversized LEGO elements and screws which make the perfect accompaniment for the scene. Antony is also pretty decent as the “vehicle” of the set, scoring tons of points in the playability department thanks to the fancy articulation.

Overall, I have nothing but praise for this set and it’s a crying same that it never got to retail shelves here in Australia. If you’re making an order on LEGO.com, I would highly recommend adding this to your cart, especially if you’re a Super Heroes fan.

Even if you’re not a hardcore Marvel fan, the elements such as the fantastic printed torsos, headgear and giant LEGO bricks still make this a worthy purchase that can be reused for a variety of different sci-fi inspired scenes or designs.